This post is about getting a rabies shot in Târgu Jiu. When I arrive at the hospital I realize that I forgot to take my wallet.

The bites themselves weren’t bad at all. I had washed them in the bathroom of the Tara Restaurant, and when the management got wind of what had happened, they helped with antiseptics, and then they called the paramedics.

how to get shots

I wasn’t worried about the bites themselves, but, just like four years earlier in Georgia, I still needed to get shots against tetanus and rabies. The problem was: I was in a ski resort up and beyond the tree line in the Carpathian mountains.

Luckily I had met Raluca and John in the restaurant. They were going to a wedding in the city of Târgu Jiu the next day, and they agreed to take me there and drop me off at a hospital. The ride took a bit more than an hour.

When I got to the Târgu Jiu Emergency Hospital and was asked for my ID, there was a moment of panic. I searched frantically for my wallet, only to understand that I had left it in the guesthouse in Rânca. Luckily my passport was with me and the treatment was free, so I was able to get what I needed. They made a vaccination schedule for me, according to which I was going to get four more rabies shots over the course of one month.

But my other plans failed.

I had wanted to go get a nice meal, buy some bear spray, and maybe go to the movie theater. But now even getting back to Rânca looked like it was going to be a problem. Luckily, I carried some emergency money in the bag that carried my passport.

So I went and got a pizza. Then I bought some more pepper spray (bear spray turned out to be too expensive). And then I got on a bus back to Novaci.

When I arrived there, I found out that there was no bus and no taxi and no way to hitchhike to Rânca. It was close to sunset, and nobody wanted to drive up the mountain road. I walked to the guesthouse where I had been staying a few nights before, and when the owner saw me pathetically trying to get back up the mountain, she got into her car and drove me there.

getting a rabies shot in Târgu Jiu: 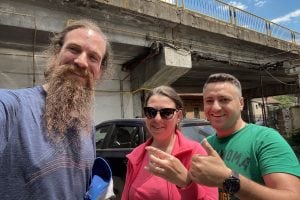 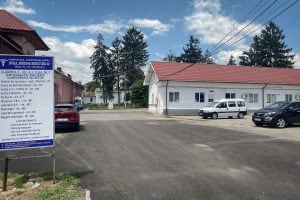 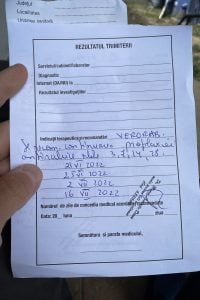 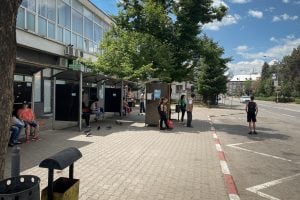 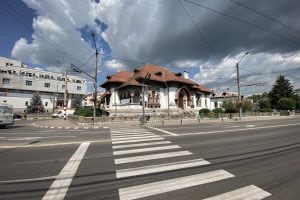 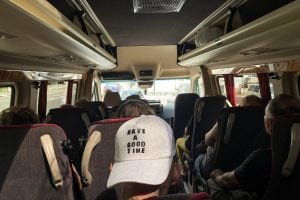 have a good time 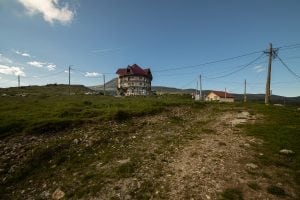 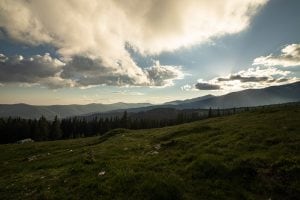 sunset in the Carpathian mountains