This post is about a 19km walk from Oașa Lake to Tau Bistra. I am still tired, but in the end I get to play with a friendly dog.

This morning I felt a bit better. I had taken a shower and washed my hair. Also, the team of the guesthouse had done me the greatest of favors: they had put all of my laundry into their washing machine!

This is something that I cannot emphasize enough: if you happen to run into a traveler near your house and you want to show them some kindness, you can of course offer them food and drink and maybe even a place to rest. But asking them if they want to use your washing machine, that is the secret sauce.

Having a bunch of clean clothes is just such an awesome feeling, and not having a washing machine around really makes you appreciate their existence.

When I got back on the road I felt clean and nice. I was still tired, though. It was unclear to me if it had to do with the physical effort or with the accumulated stress, but I felt exhausted. One of my legs had been weaker than the other one for a while, but now it felt even less reliable. I didn’t like feeling this way.

I walked past the Oașa Dam without quite noticing its existence, then I was again in the forest. It seemed even more green and lush than the day before. The leaves were large, and there were little waterfalls here and there. Sometimes I felt reminded of the green parts of Iran.

Again I found no place to camp. Most of the time there was dense forest on both sides of the road, and when there wasn’t, then there was something else. Beekeeping boxes. Signs that said NO ENTRY. That sort of thing.

It was at one of the NO ENTRY signs that I ran into a friendly dog. First she barked in a not so welcoming way, but then she came running over and wanted to be petted.

I was happy that I could be friends with dogs. It felt much better than spraying and cursing them.

the walk from Oașa Lake to Tau Bistra: 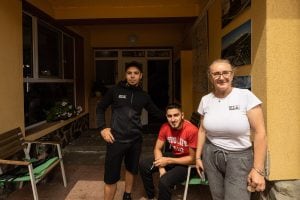 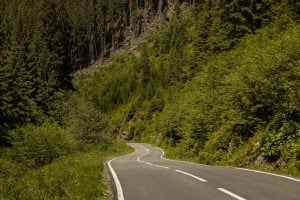 the road to walk from Oașa Lake to Tau Bistra 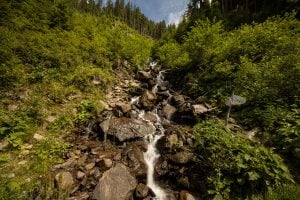 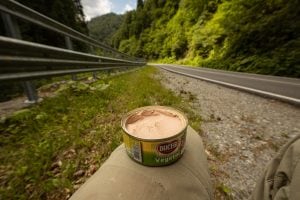 the goo I eat

self portrait on the road to Tau Bistra 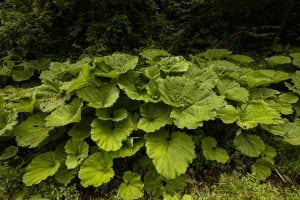 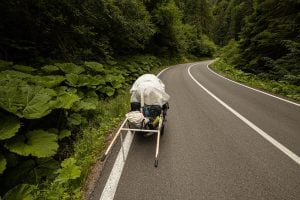 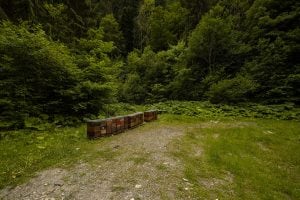 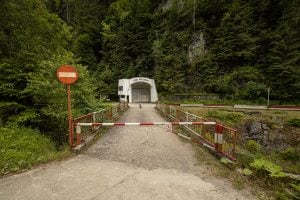 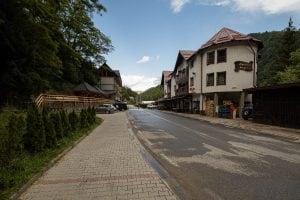 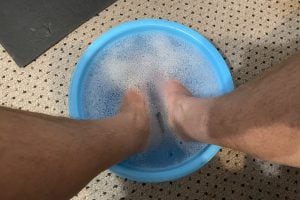