I had some more trouble with my tires, but the dudes from the Red Crescent helped me get it fixed.

They were overall nice guys, and they had given me great food and a warm place to spend the night: 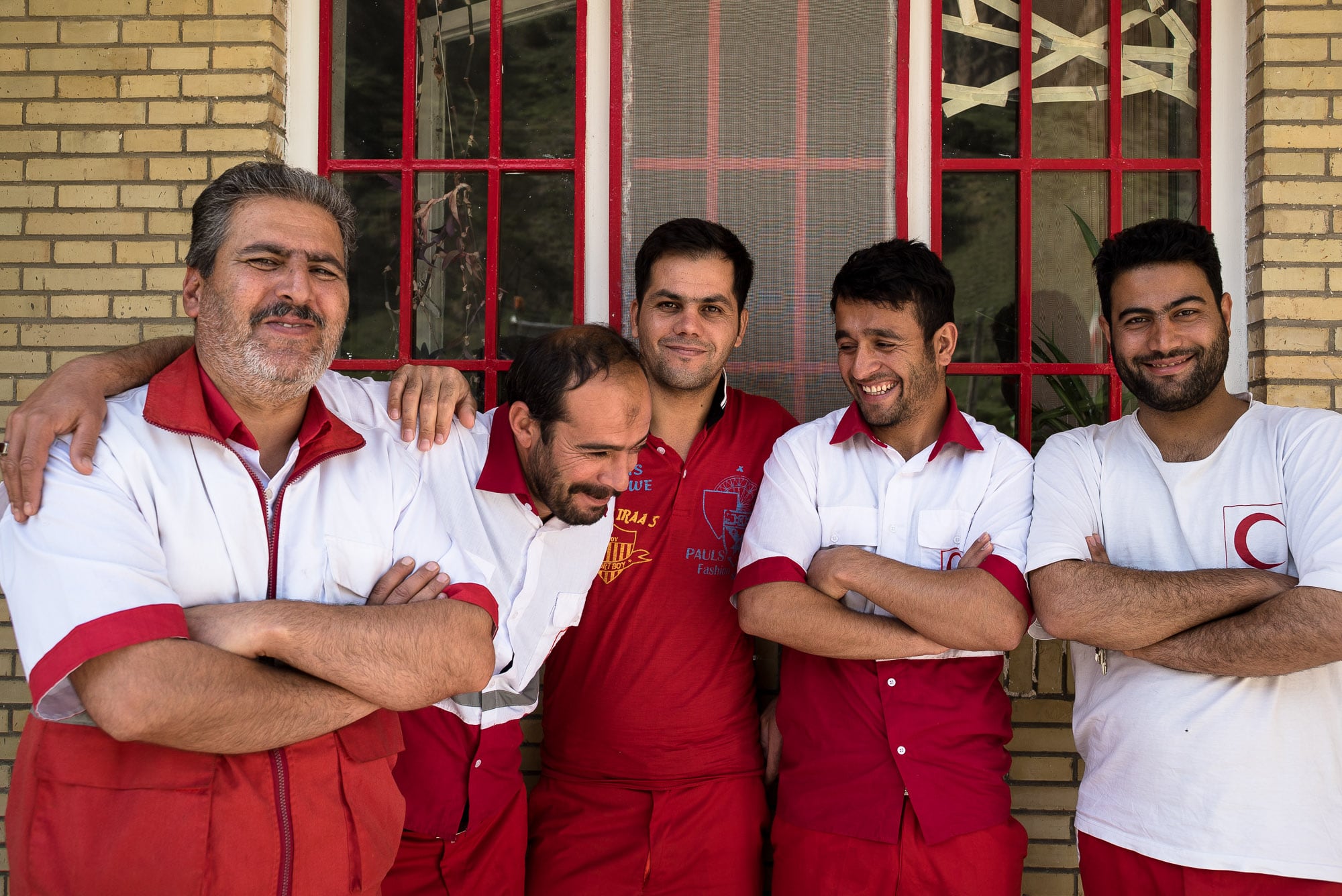 I was a bit shocked when I noticed that the barbecue stands outside were already up and running – at nine in the morning: 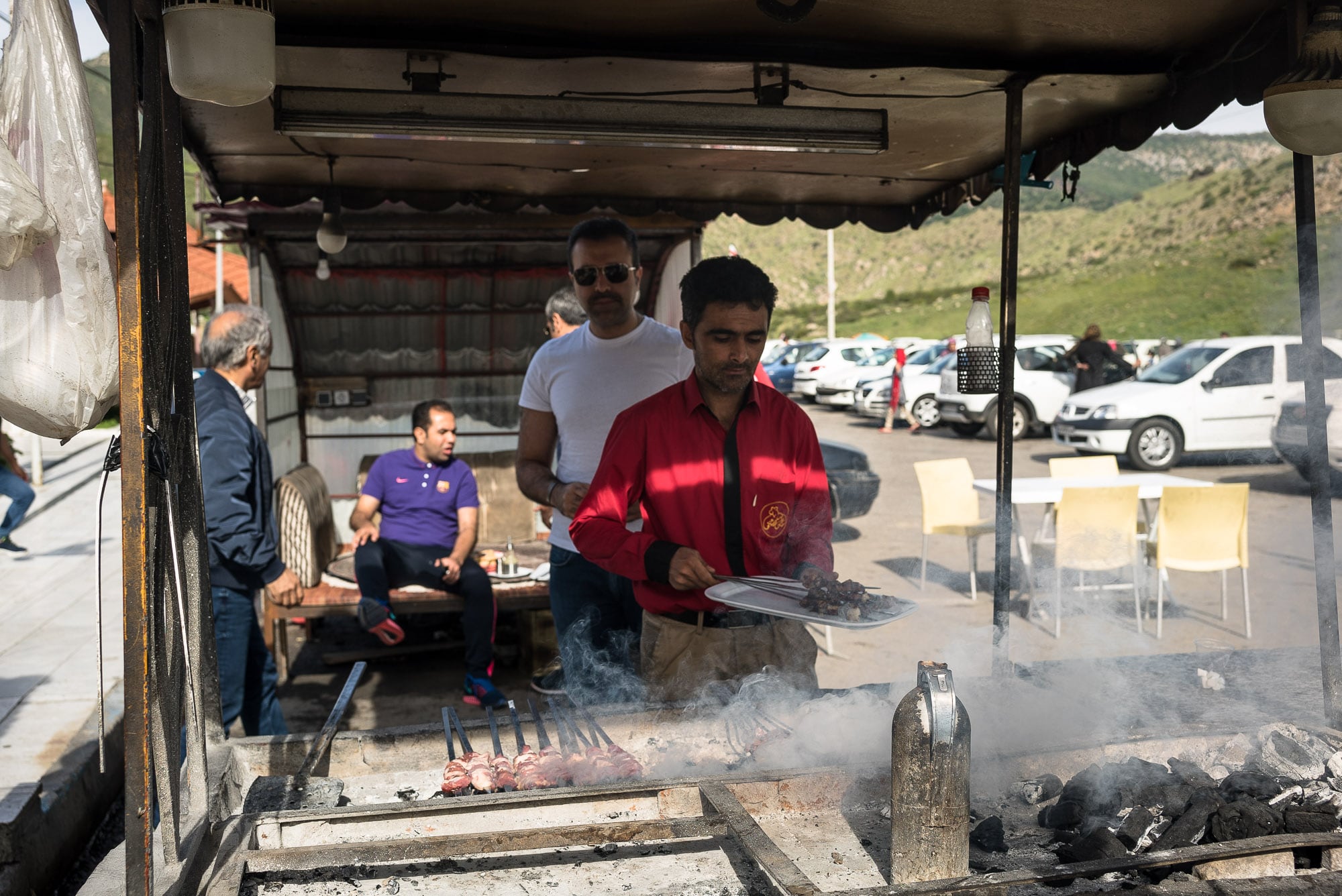 But then it was Friday and a holiday on top of that. And the weather was good. So there were plenty of reasons for people to come up here and enjoy some of that morning kebab.

I was excited. Very excited. I would see the jungle today!

And indeed, it was getting greener: 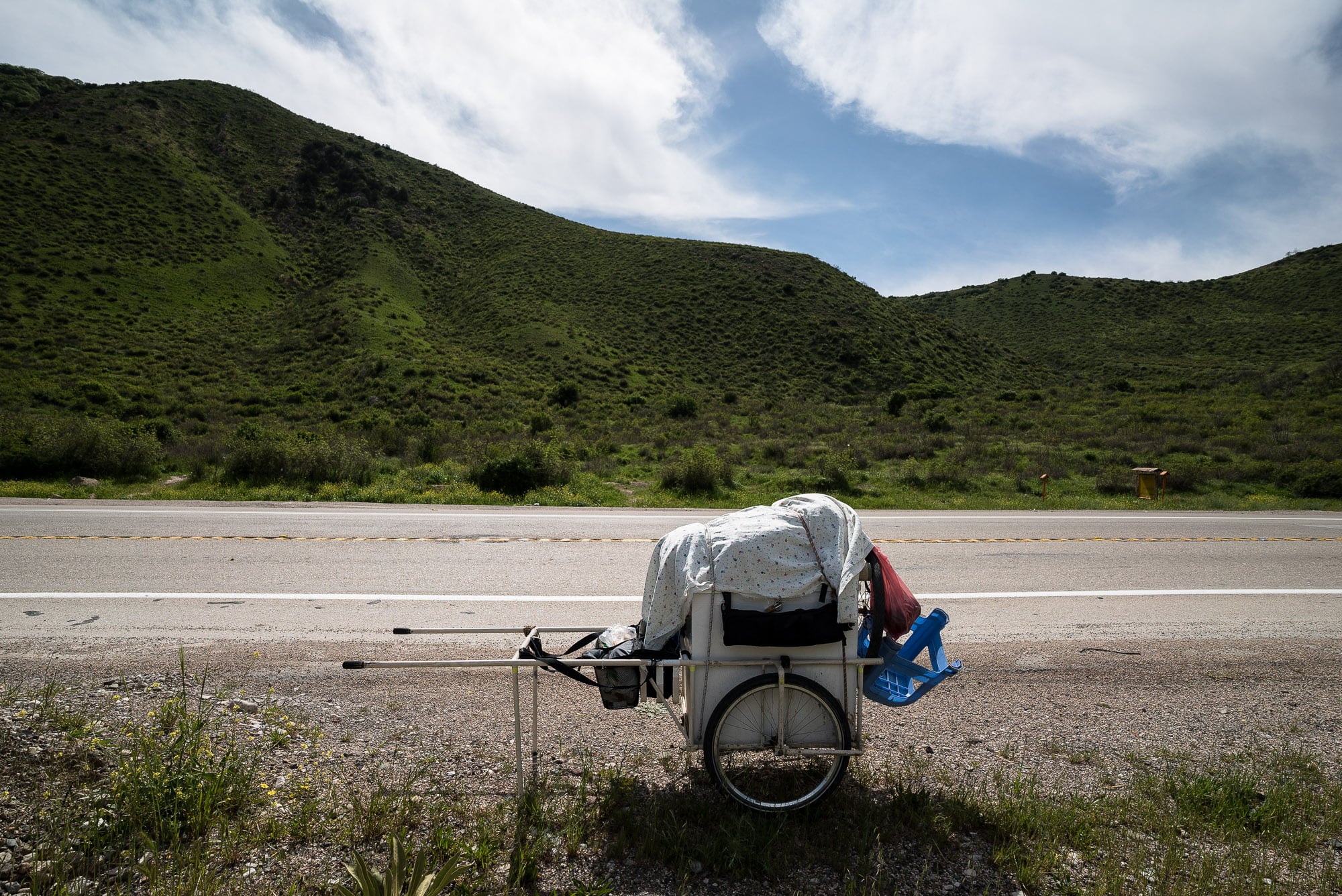 This gentleman stopped and gave me some herbs he had been collecting: 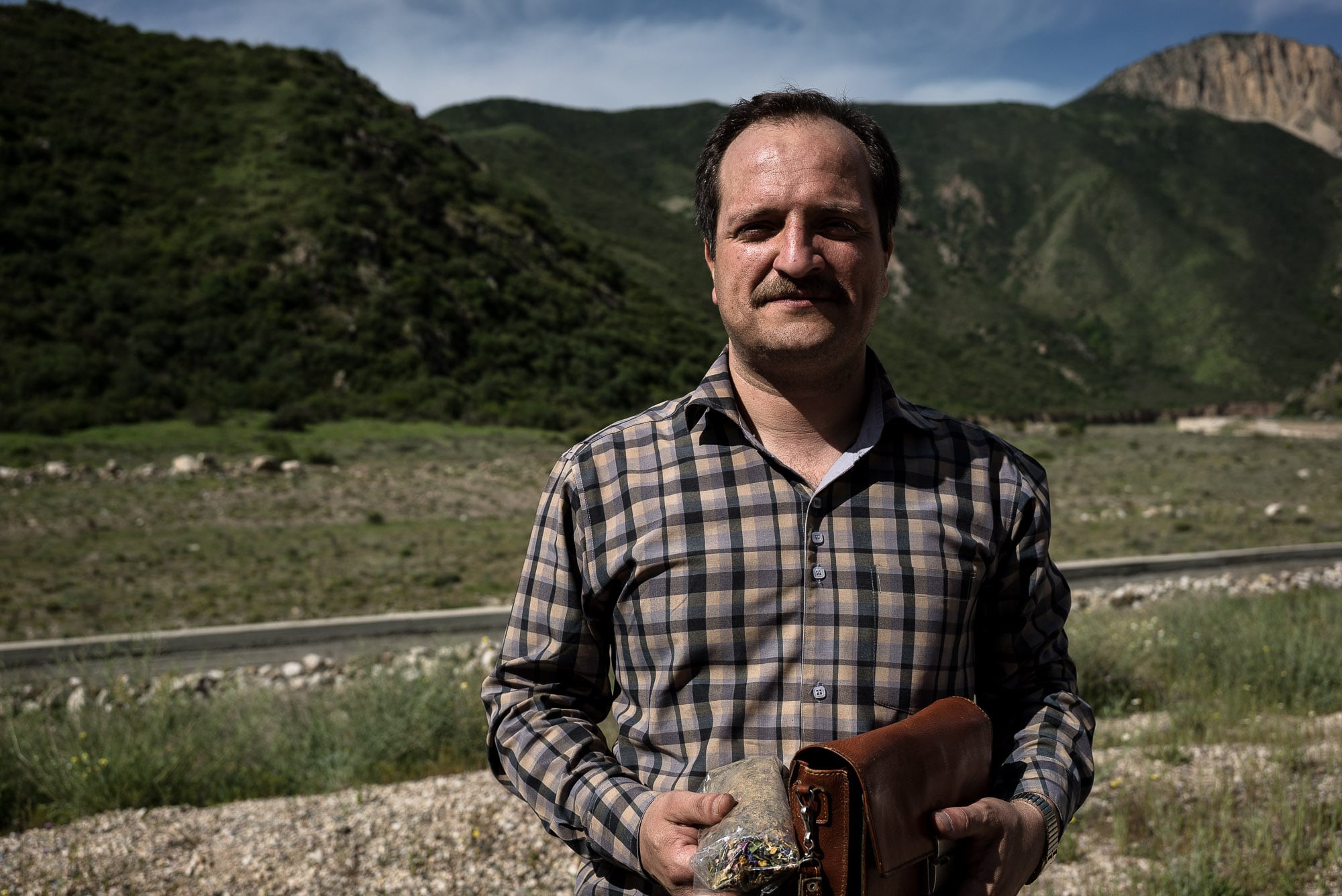 And then, after a bend in the road, it began: 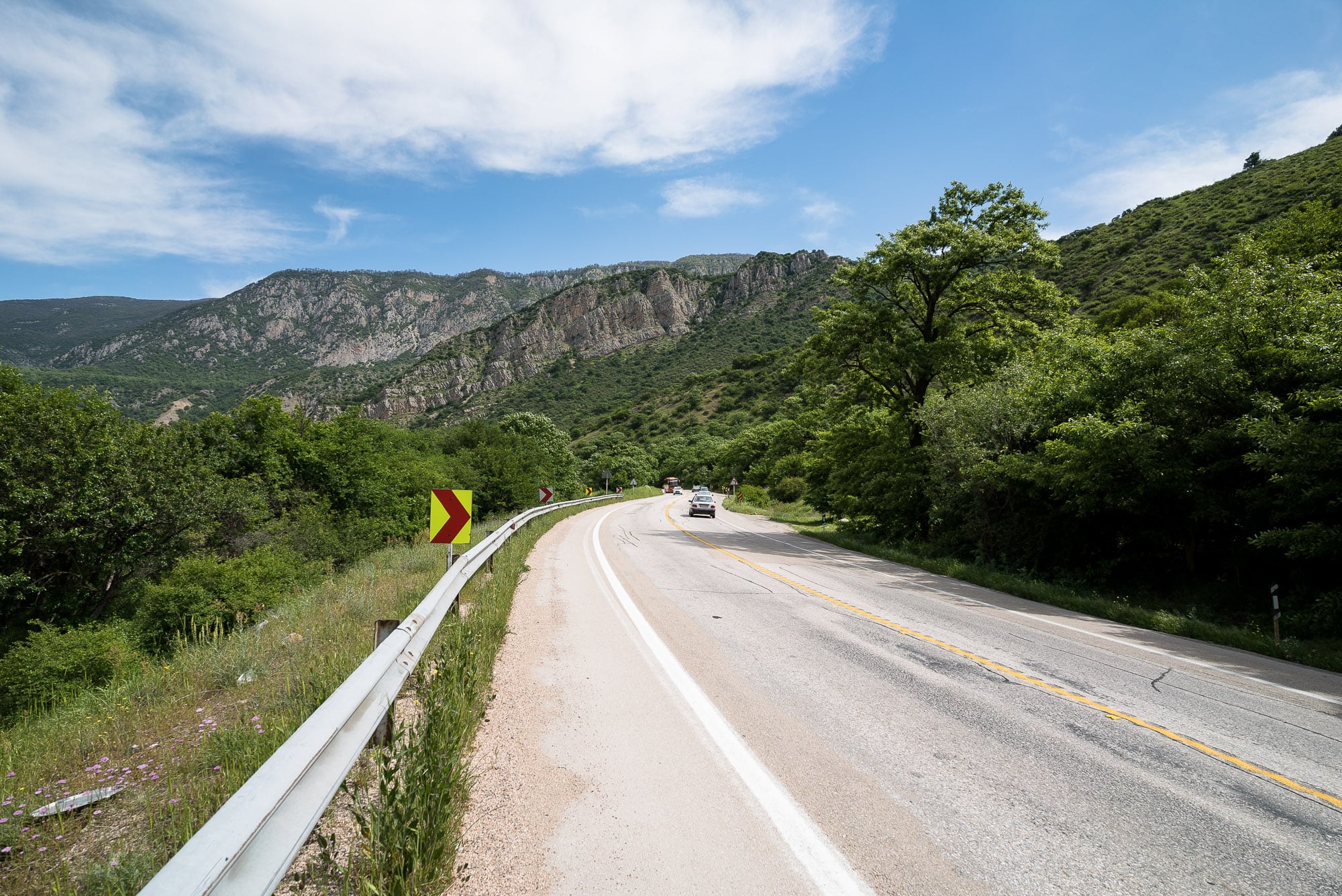 There was a big fat lush overboarding greenness everywhere, it felt like diving into a salad bowl: 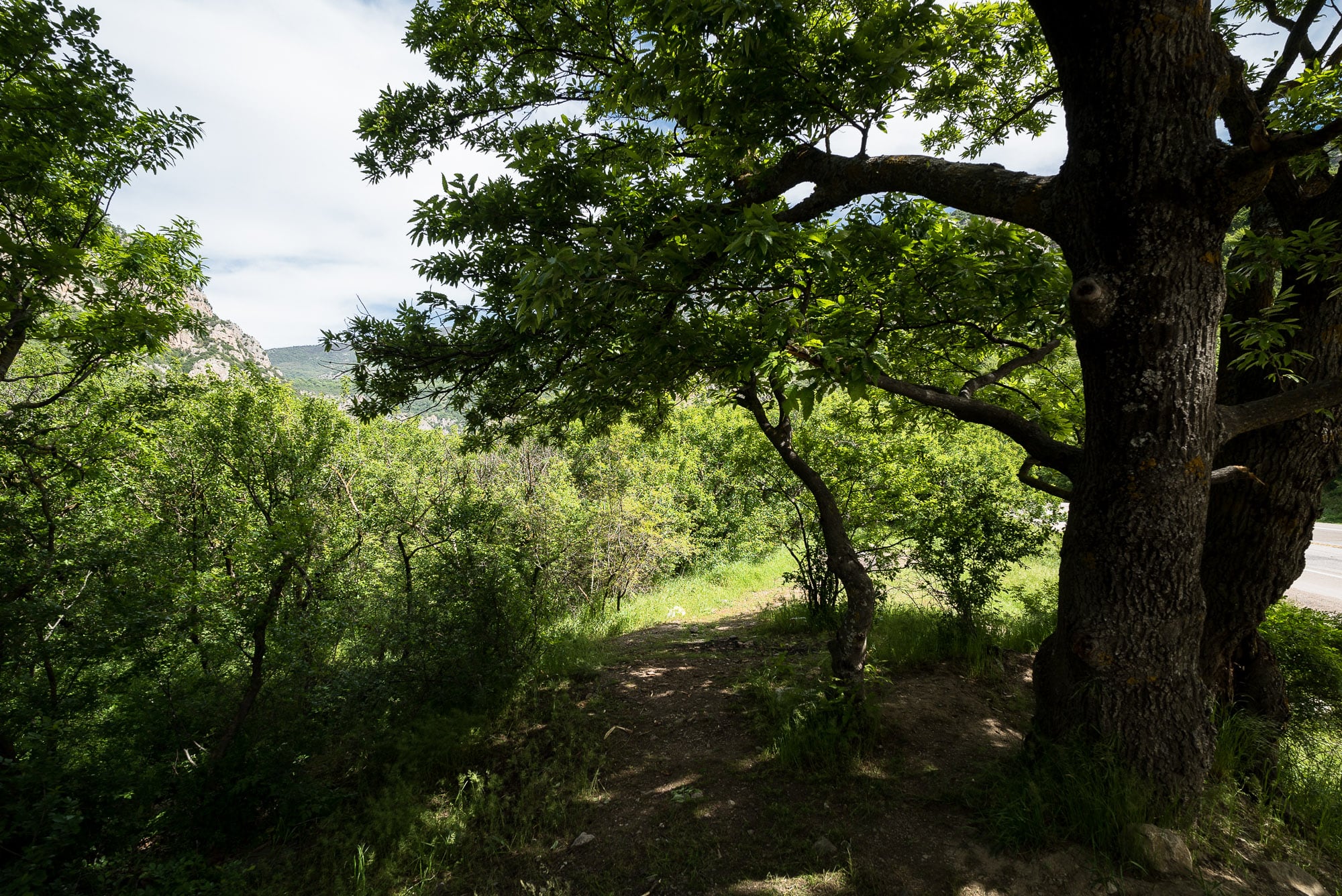 And then there was a street sign that said Tehran was only 580km away: 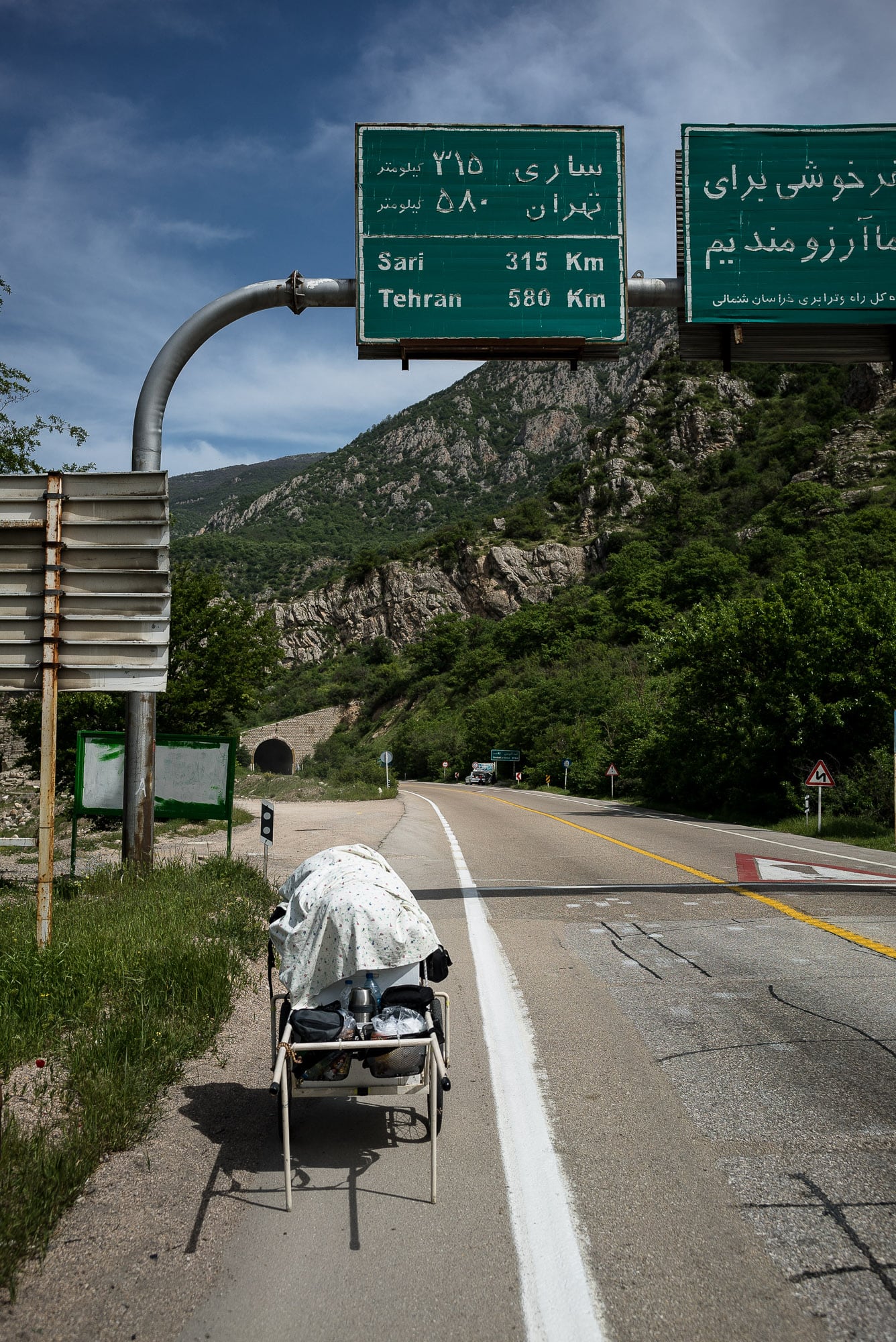 I wasn’t planning on going there (Iranian cities were maddening to walk, and Tehran was behind a massive mountain range), but still, this felt exciting.

I walked around a little tunnel, and I saw parked cars and even parked buses everywhere: 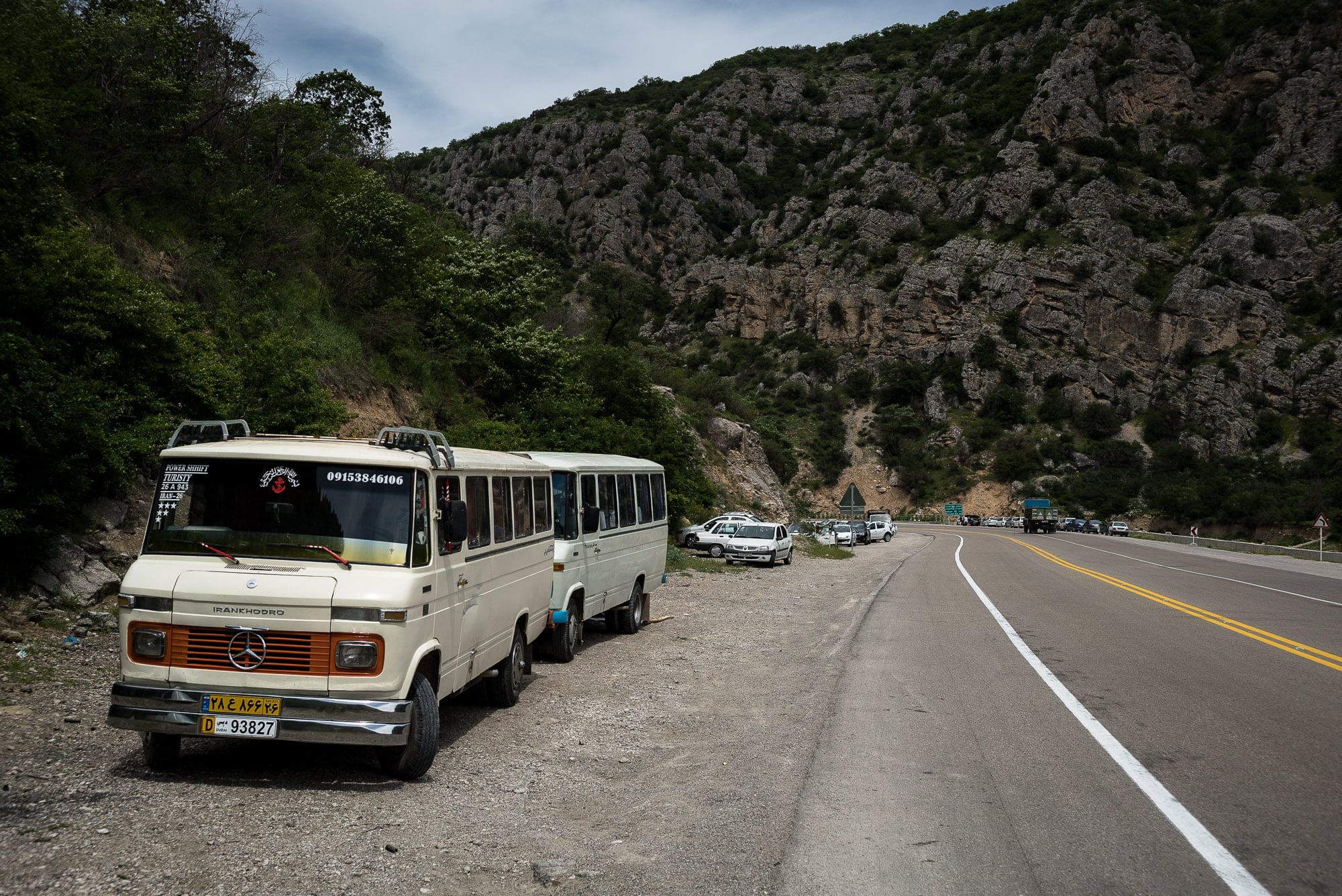 It seemed as though everyone in the province had come out to the jungle today. And it was a jungle alright, at least judging from the signs that said “Deer Habitat”, “Brown Bear Habitat”, “Wild Boar Habitat”, and “Leopard Habitat”: 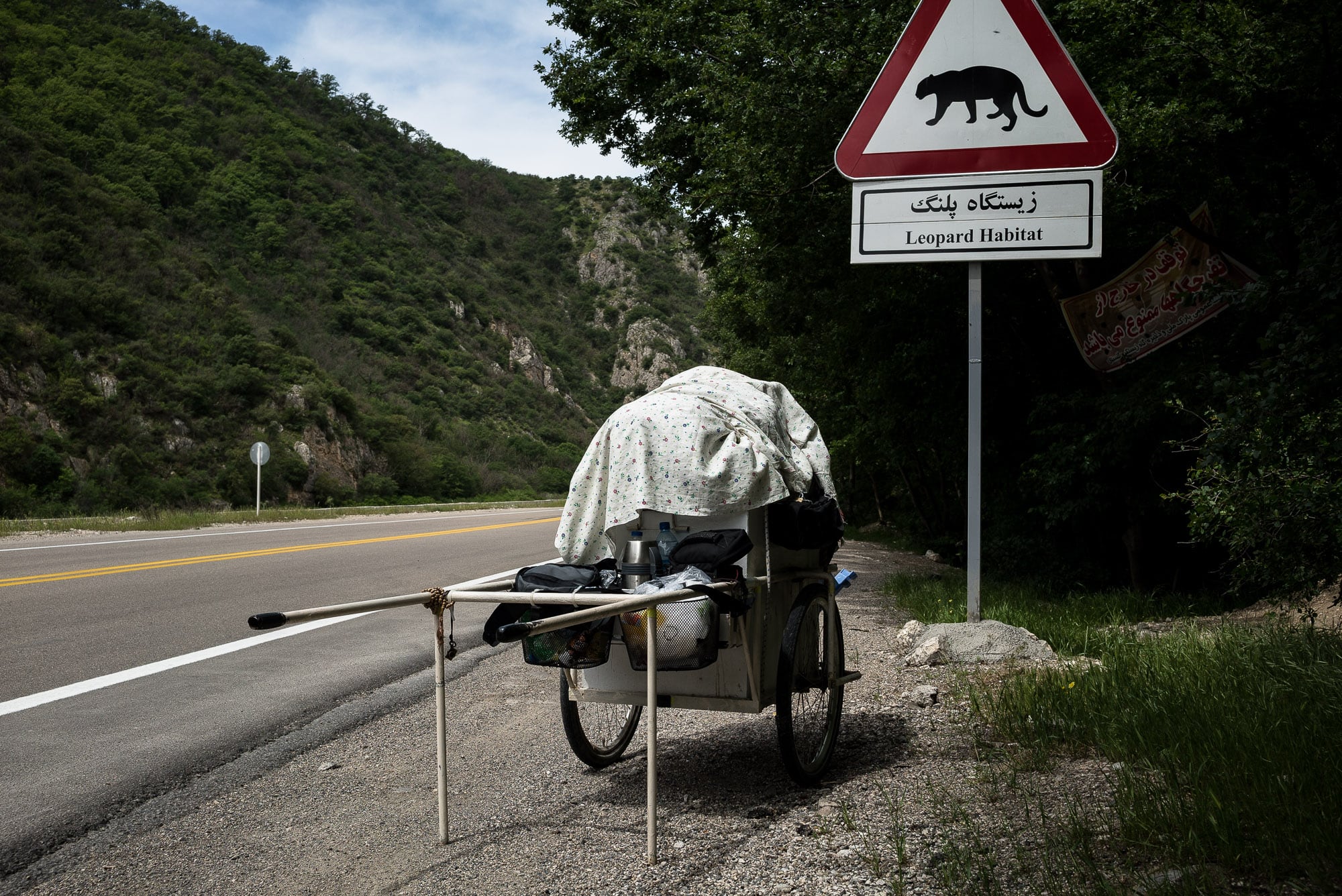 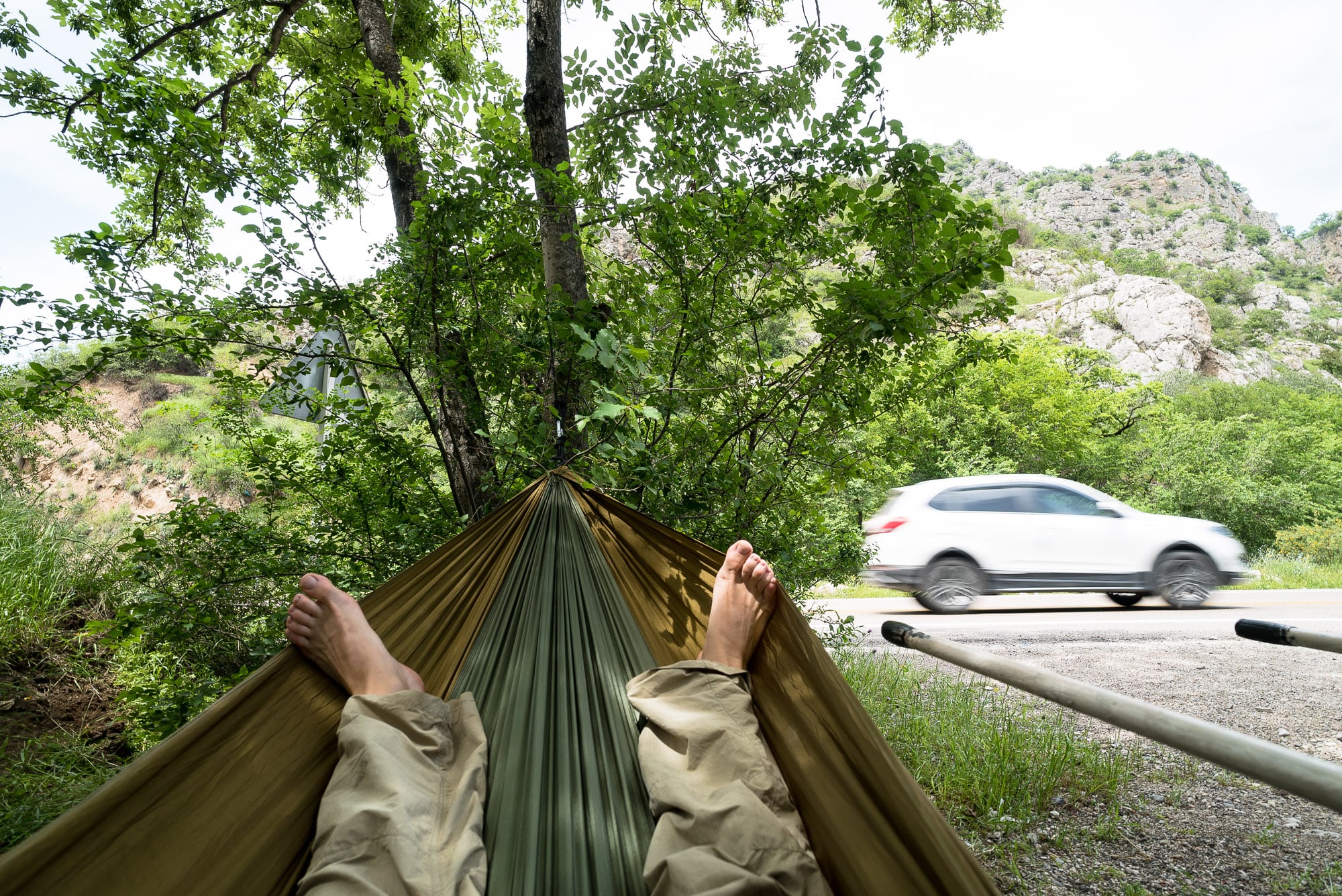 It was so awesome I started singing involuntarily.

Other people were happy, too: 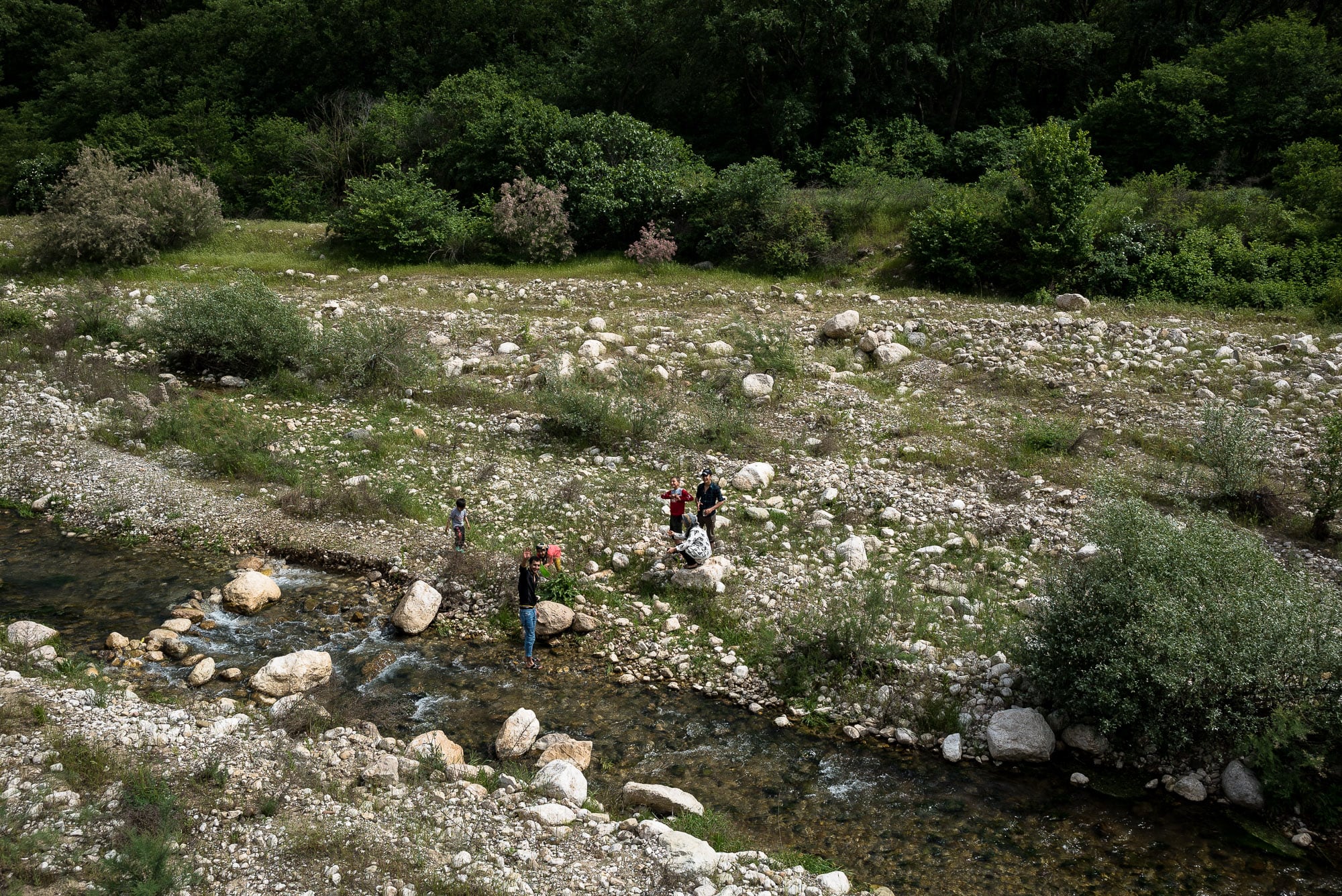 How couldn’t they be? Just a look at the scenery was enough: 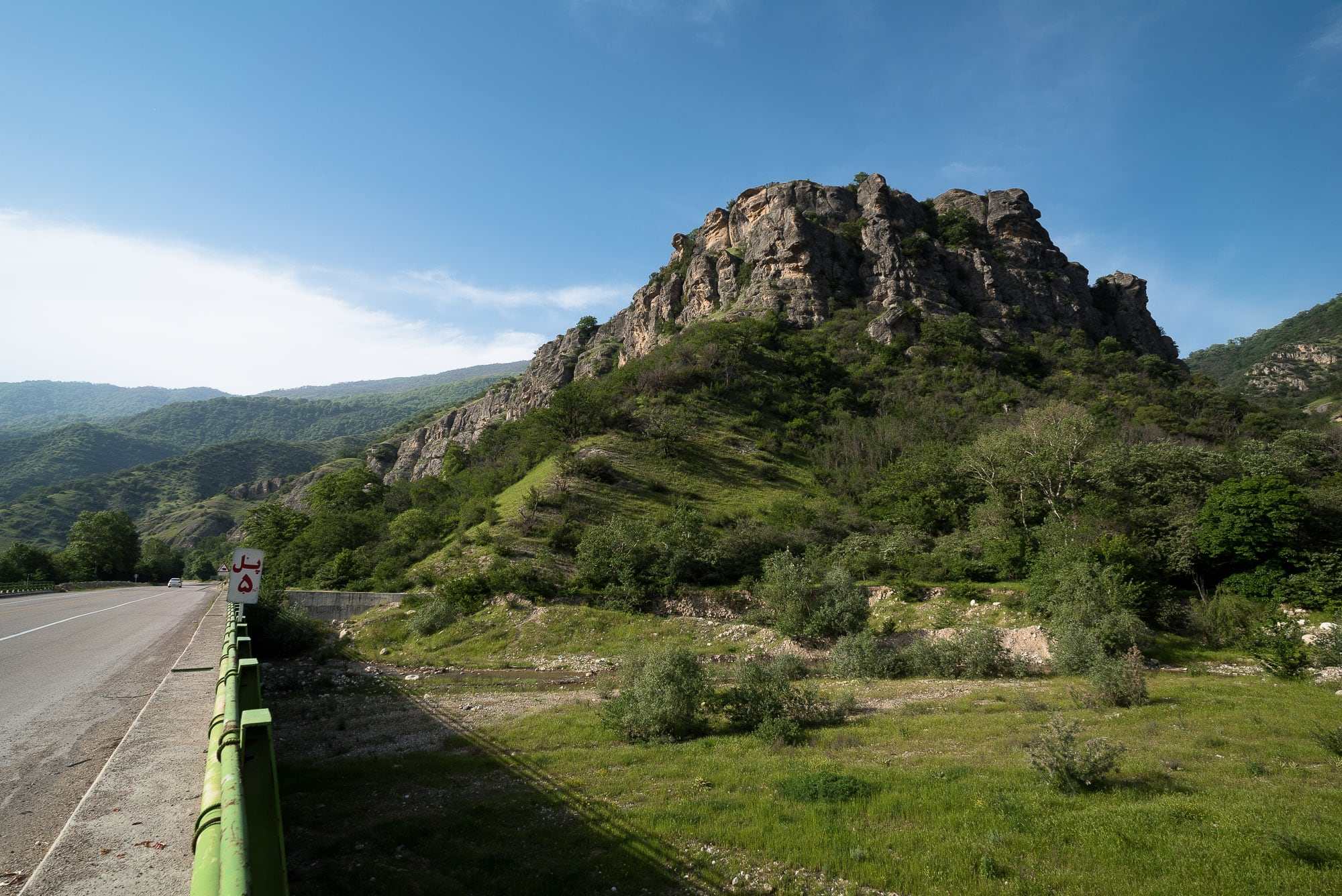 But then, slowly, ever so slowly, my happiness gave way to anger. There were cars everywhere, and most people were driving like idiots: 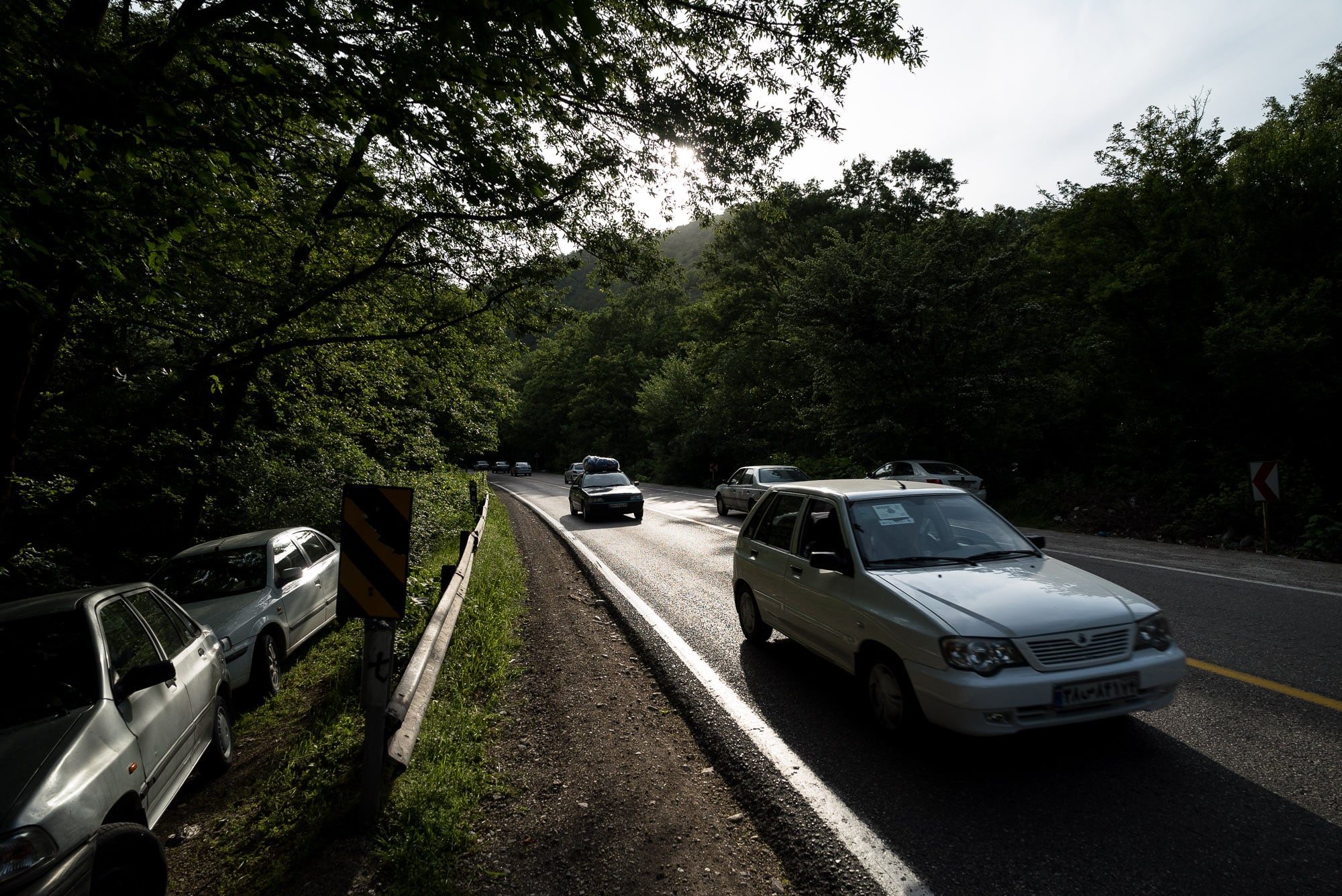 And sure, the trees were beautiful when you looked up: 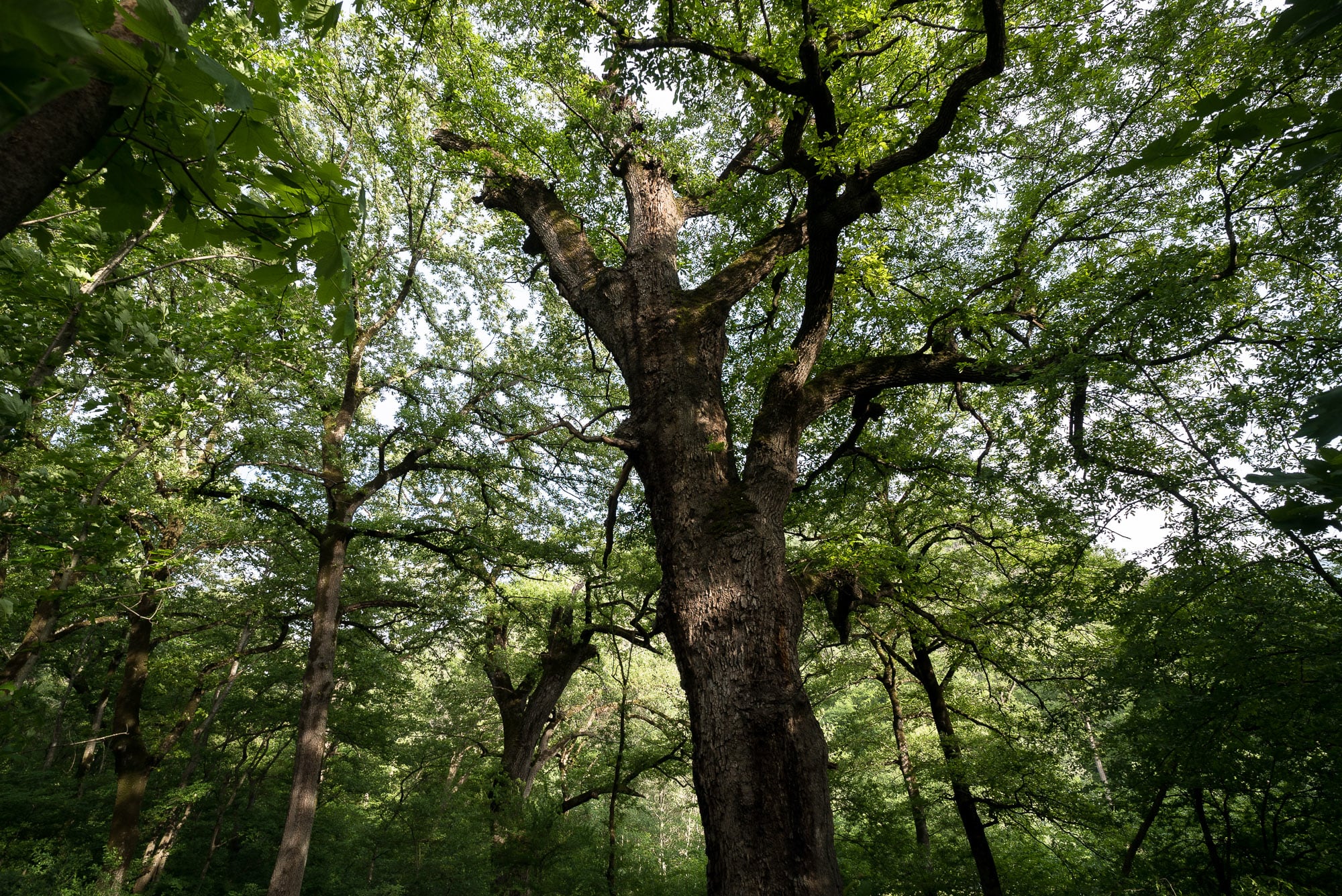 But below them, at their feet, people were leaving their trash everywhere: 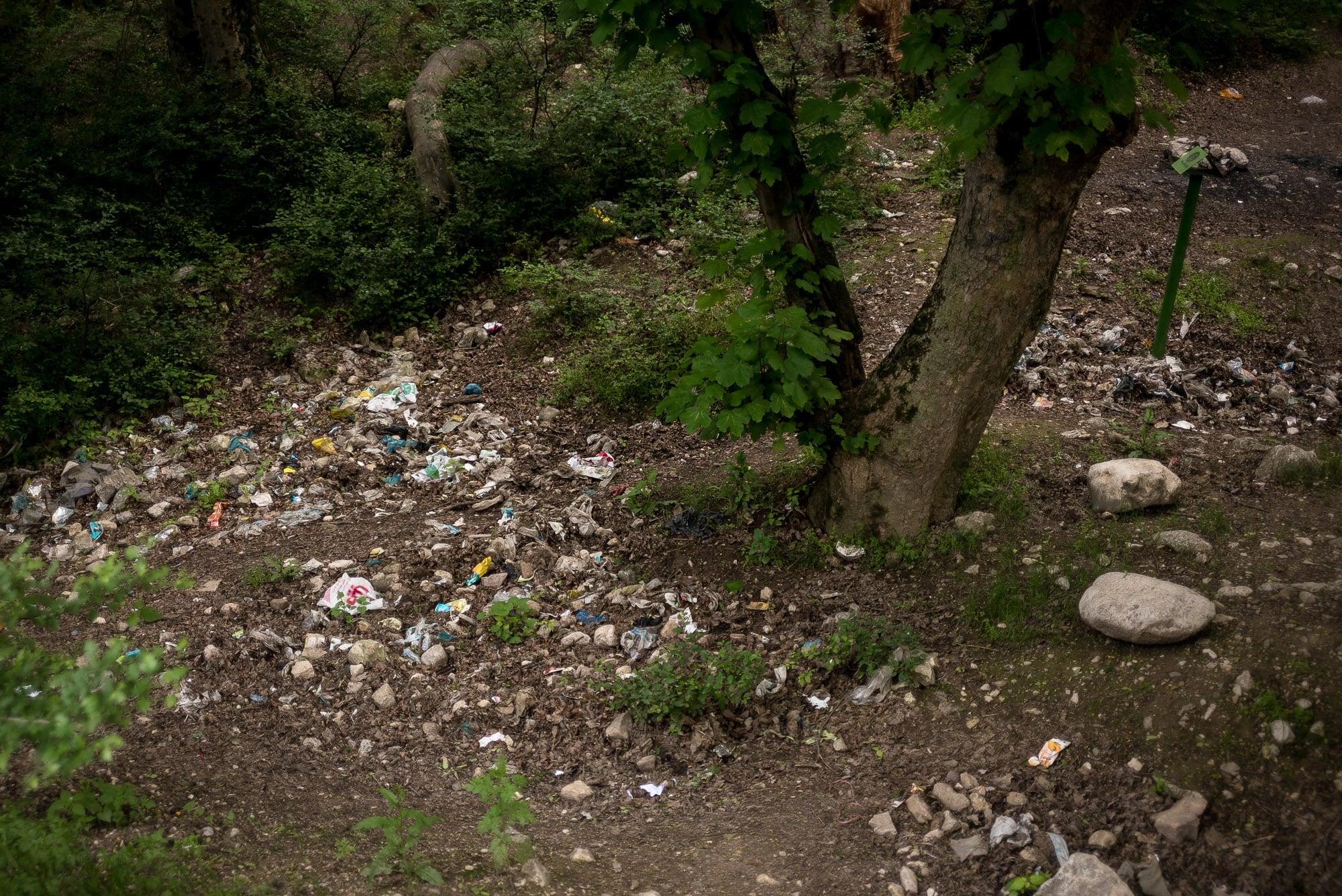 I never saw a leopard. Or a bear. But I saw wild boars. They came close to the road, and they looked very happy, because people were feeding them: 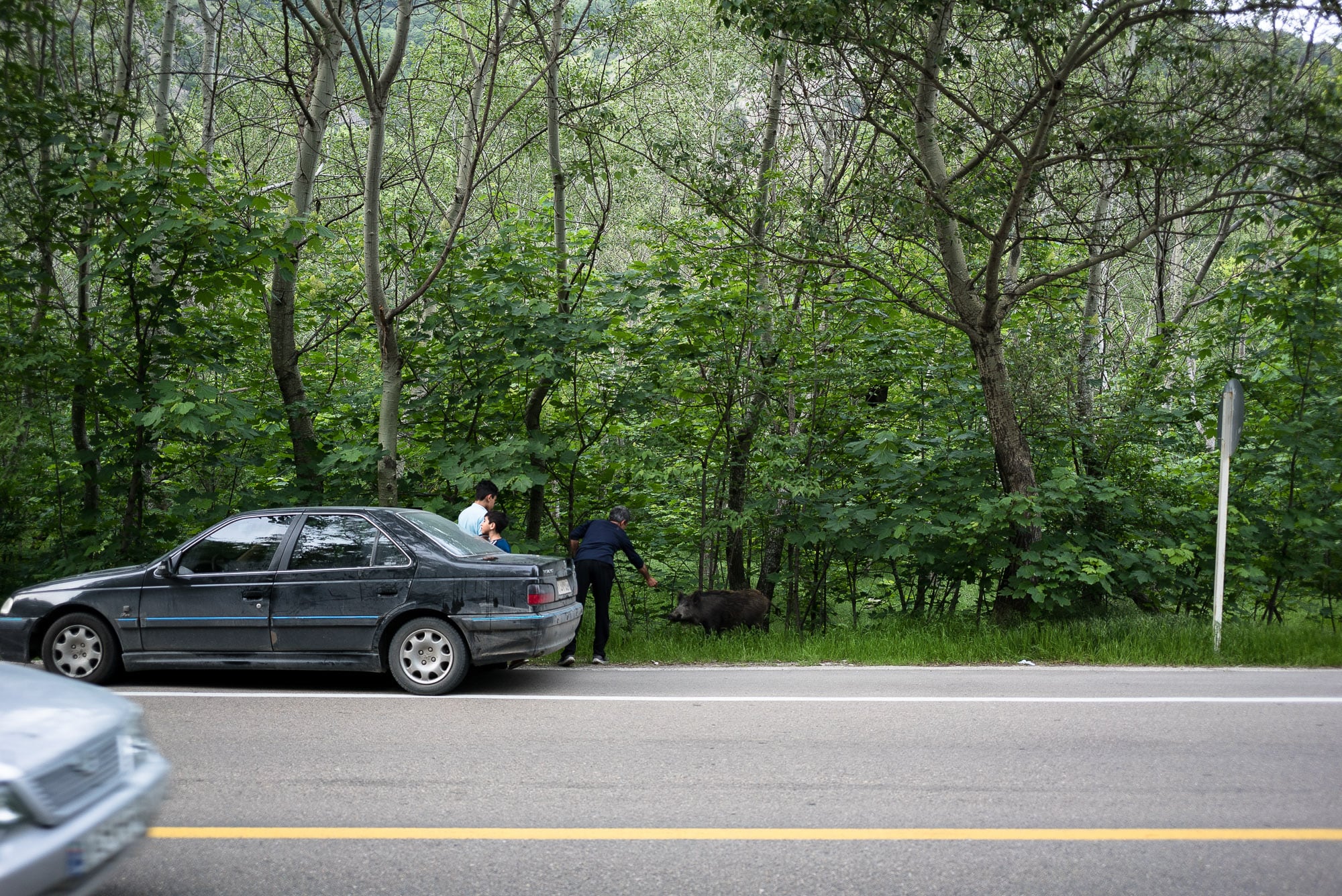 And even if no one were feeding them, there was trash everywhere. It was hanging from the trees: 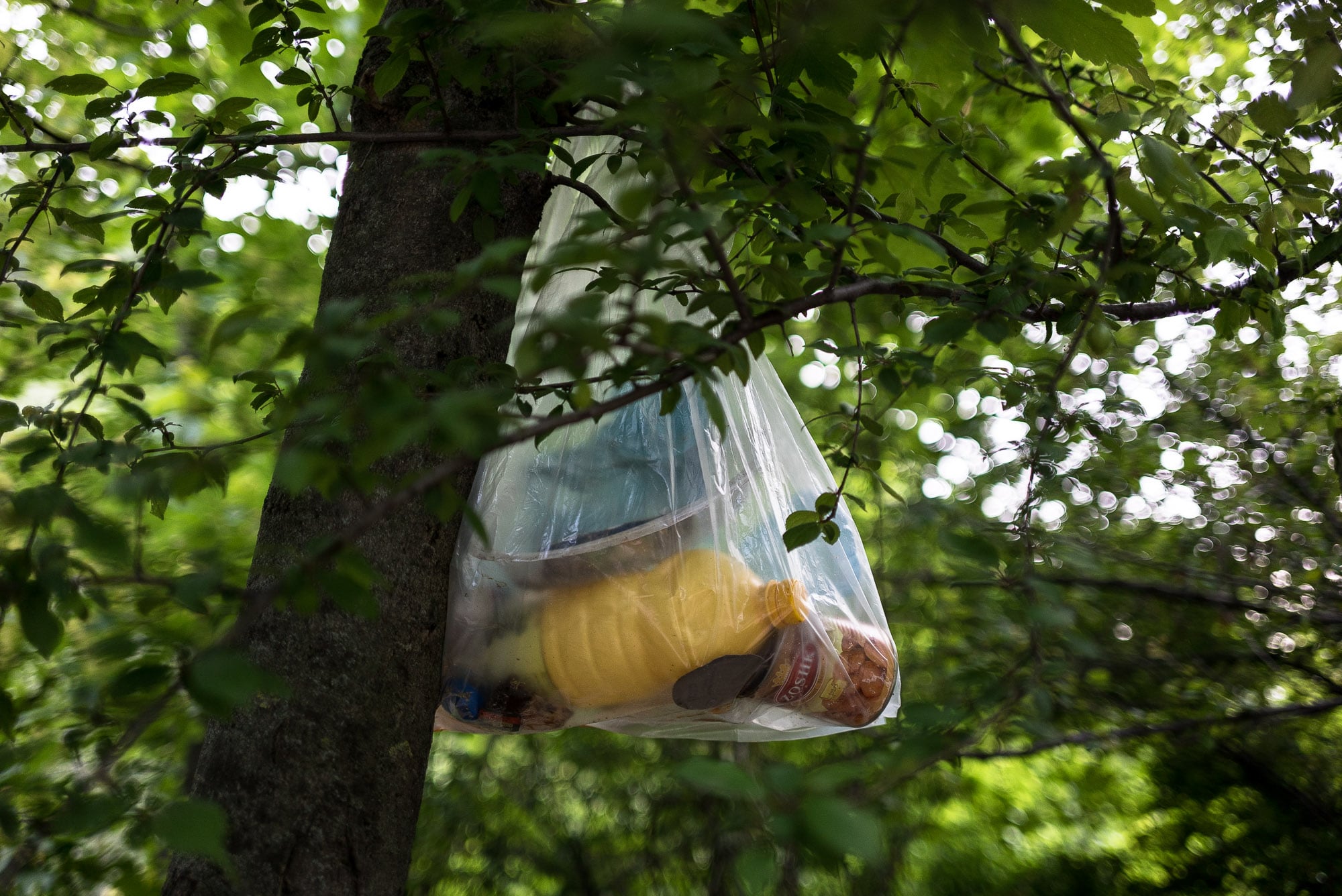 And it was scattered across the ground: 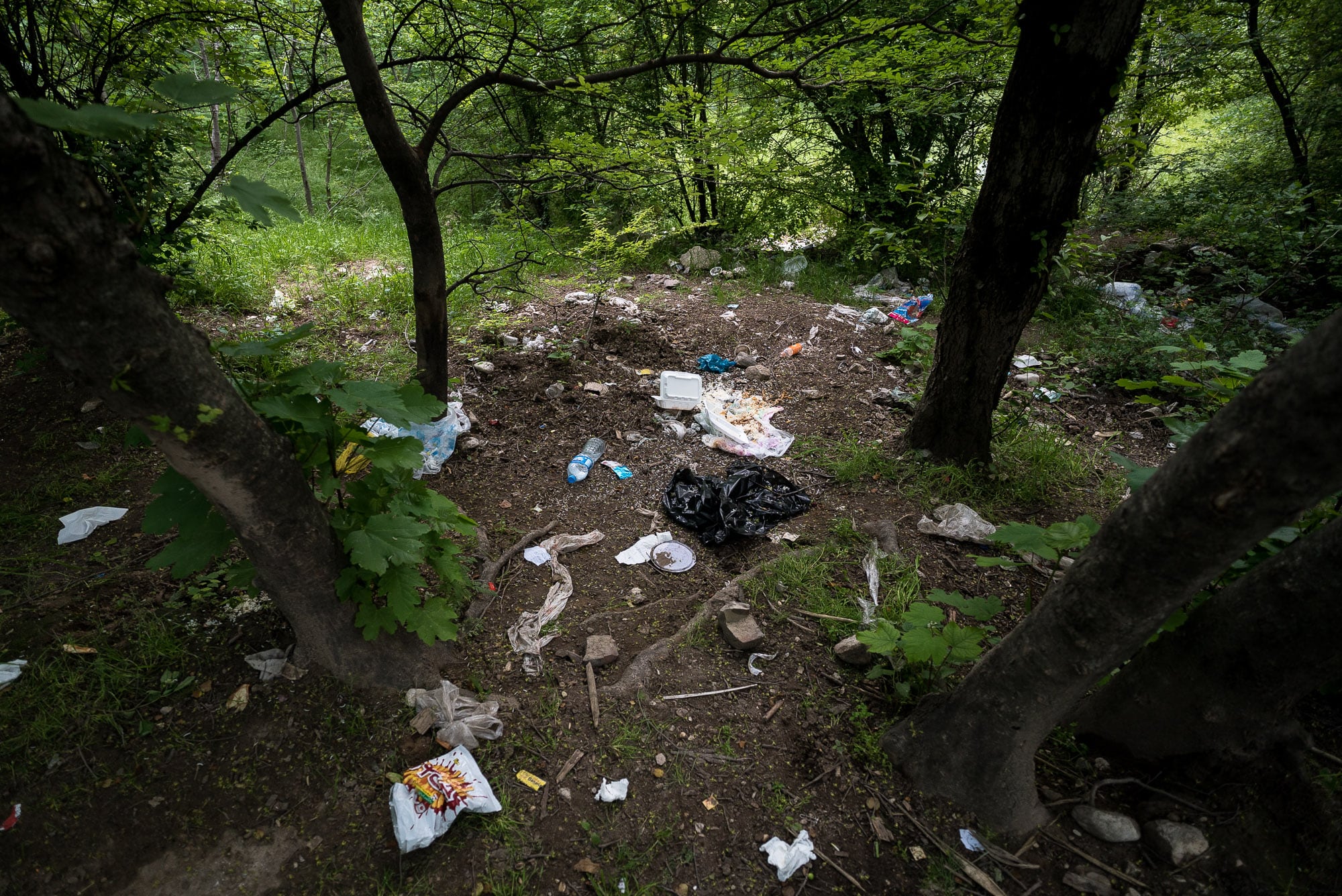 How could people do this to a place that was so beautiful, I wondered: 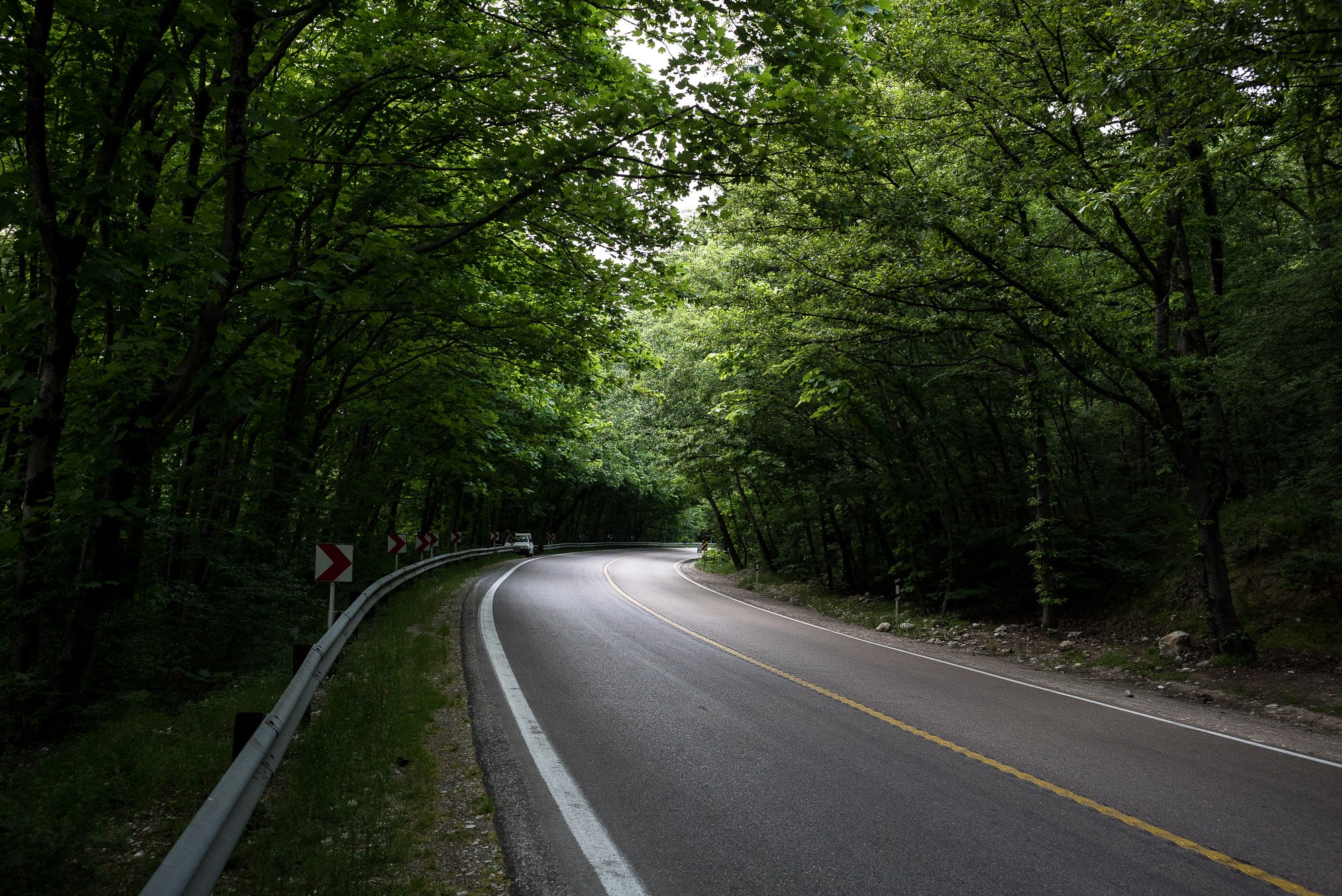 Sometimes I found myself so mad with anger that looking up at the tree tops was the only way to calm me down: 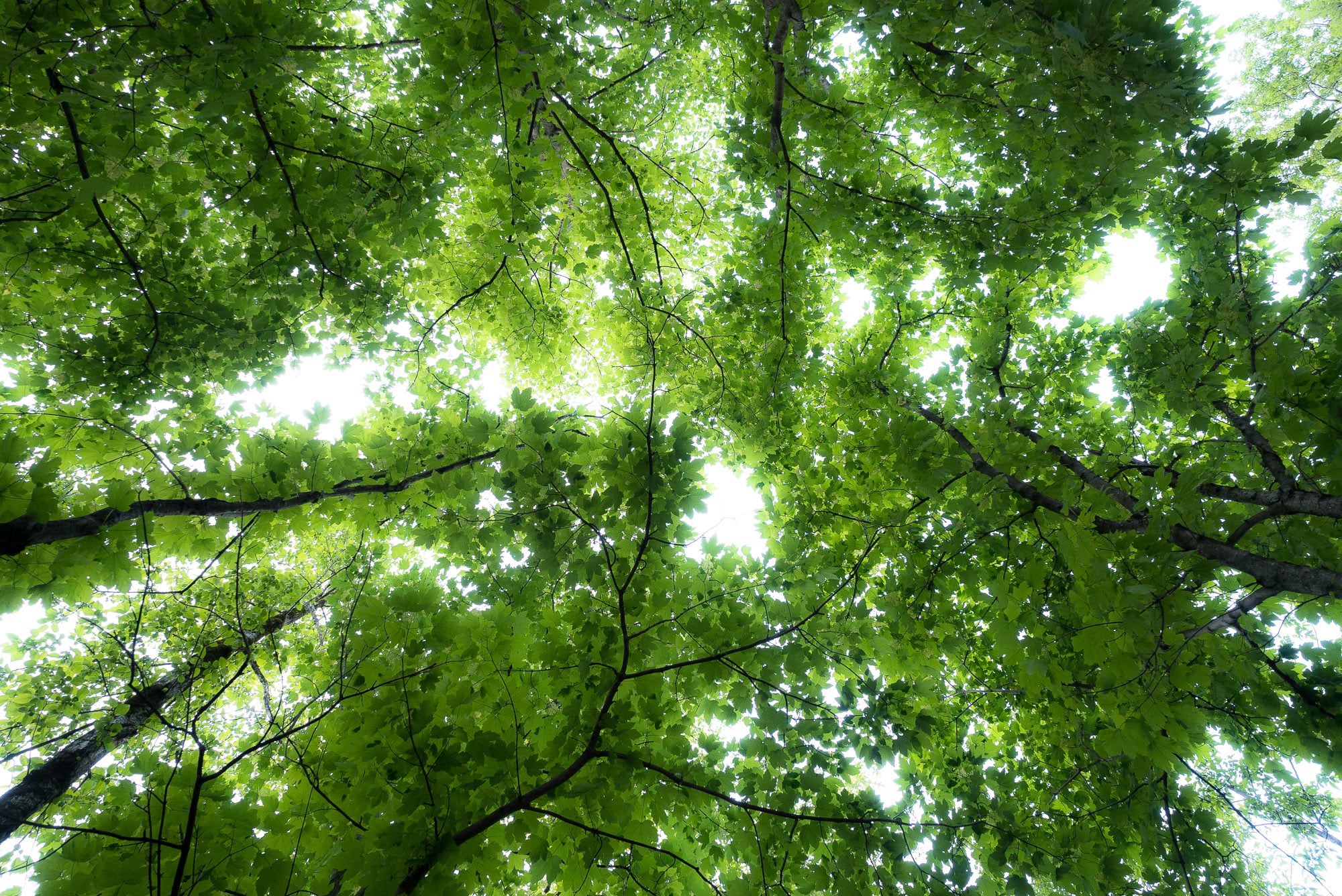 I walked until after nightfall, and, being thoroughly fed up with all the crazy drivers on the main road, I took a little detour through the jungle: 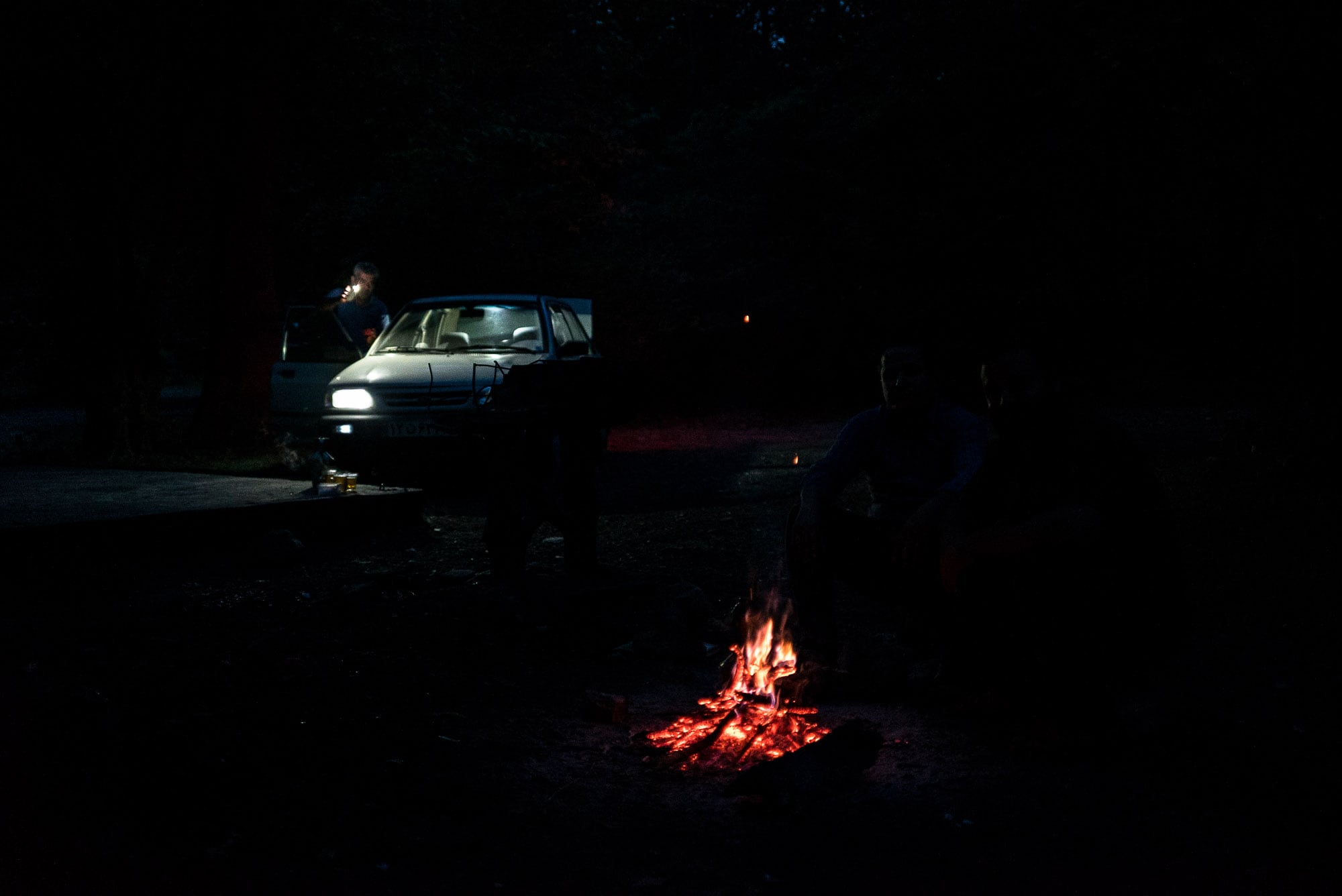 I could hear the wild boars grunt when my presence irritated them, and I caught myself thinking: shut up, pigs. 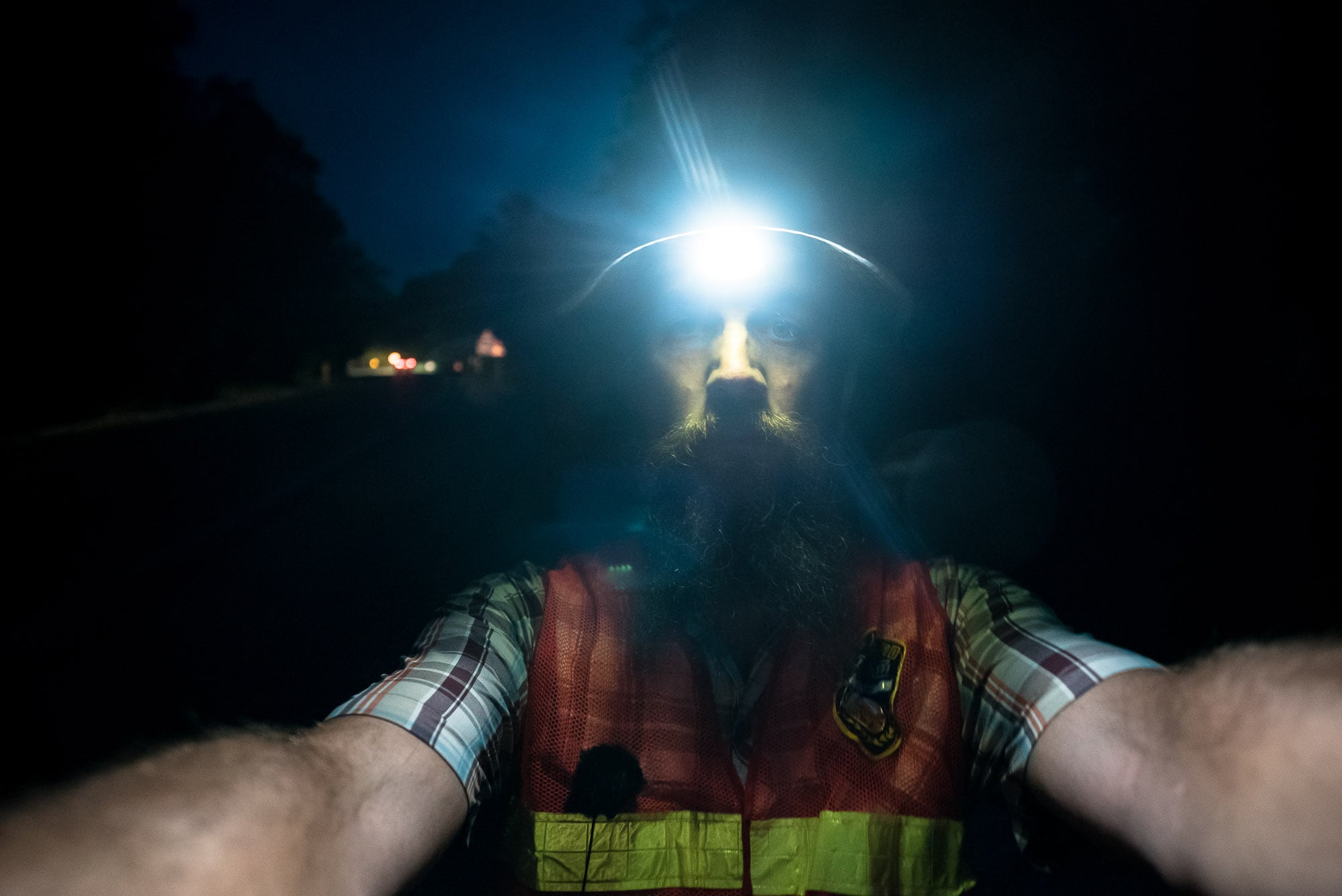 Then I was back on the road again, with only a few kilometers left to go to a village that apparently had a hotel: 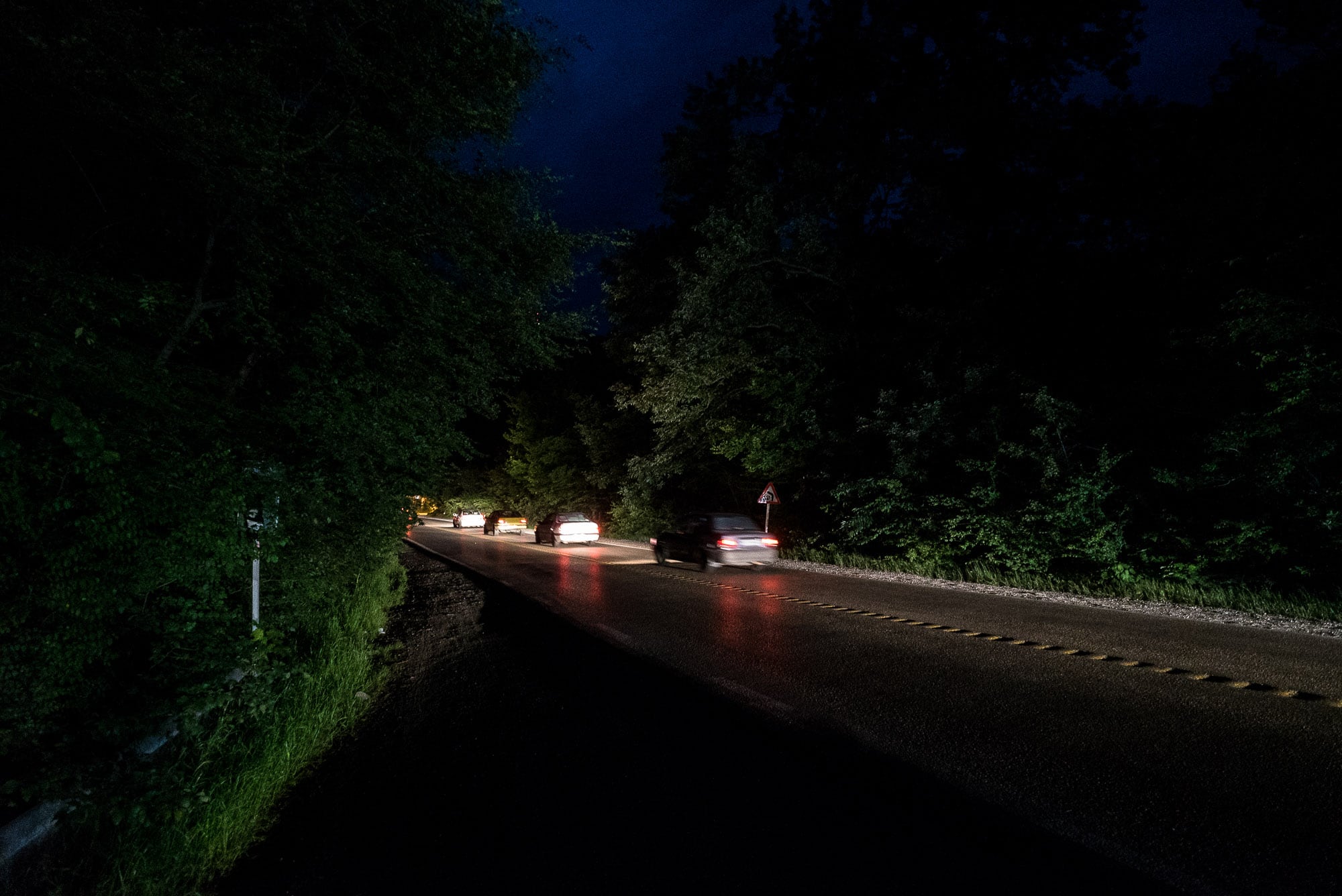 I had descended more than 500 meters at this point. But the only thing that I could think of was bacon. And how much I wanted to sleep.