This post is about an 18km walk from Tau Bistra to Șugag. I start off with a deep fried pancake, and I make some friends on the way.

The first thing I saw was another dam. It was called Tau Bistra, and it looked pretty damn big.

The second thing I saw was a food stand that seemed to sell pancakes. They called them langos, and they were actually deep fried pancakes. I ordered one with nutella and danced around on the damn dam because it was so good. I chatted with the owner of the food stand for a while. His name was Mirca, and the season was three months each year.

A few bikers appeared. They were from the Czech Republic, and they seemed very friendly. I had built up a strong animosity towards bikers at this point. Or rather: the objects of my animosity weren’t the bikers but the motorcycles themselves. Many of them were just so goddamn loud, I couldn’t stand it.

But I liked these guys. And so I told myself that I was just keeping my enemies closer by making friends with them. They also got some langos for themselves, and we had a good time with our langos in the sunshine on the dam.

I was just walking down the forest road, wondering why I was out here making friends with the enemy, when a car stopped in front of me. It was Mirca, the owner of the food stand. He wanted to give me a bottle of water. I said thank you, and he drove off, but minutes later he came back again, this time with a small picture of the Virgin Mary. He wanted me to be safe.

I ran into another biker after this. Christian from Romania. He told me that he liked to ride his bike by himself, not in a group with other bikers. I liked that. Also, he said, he liked to buy stock bikes, not the loud kind. I liked that even better. And so I found myself making friends with the enemy, again.

When I reached the village of Șugag there were a bunch of guesthouses to choose from. I picked one at random. It turned out to have a few very good vegetarian food options. I also tried to find out how I would be able to get to Sebeș, the next bigger town, in order to get my rabies shot.

I ended up drunk and talking about penguins.

the walk from Tau Bistra to Șugag: 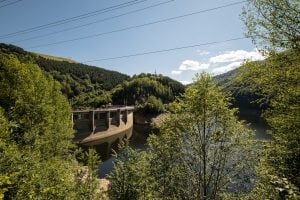 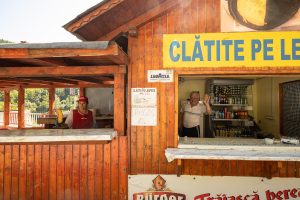 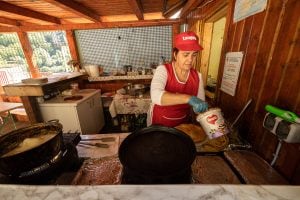 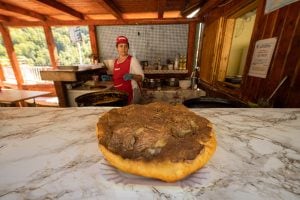 my langos with nutella 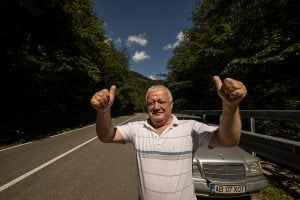 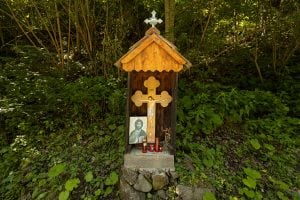 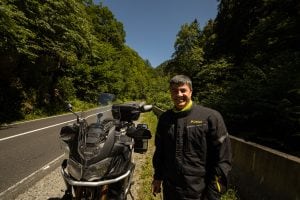 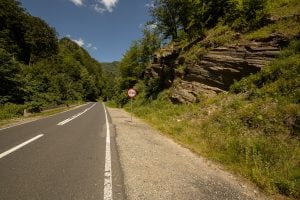 the road to walk from Tau Bistra to Șugag 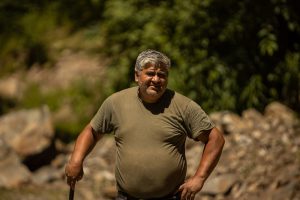 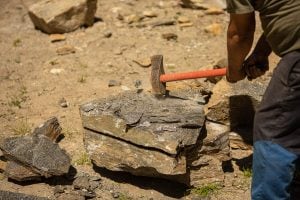 these stones had to be broken 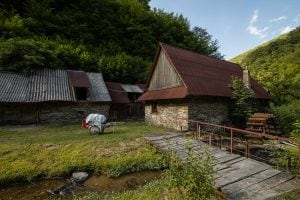 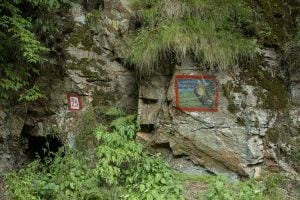 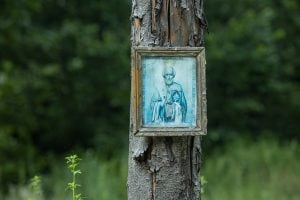 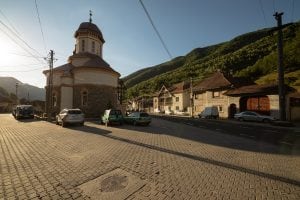 Day 571
from Tau Bistra to Șugag