This post is about a visit to the Hagia Sophia. She has recently been converted into a mosque, which I think is wonderful.

And so today I came to finally see her, the church of the Holy Wisdom. And I loved her.

But wait! The Hagia Sophia isn’t a church anymore. In fact she hasn’t been one in a long time. Her history has been one of death and rebirth for almost one and a half millennia.

Emperor Justinian built her in 537 on the site of a church that had been destroyed in a riot. She was huge and magnificent, covered in white marble, the biggest church in the world. Two decades later her dome collapsed. After the repairs she ended up being even higher.

When Constantinople, the Rome of the East, finally fell to the Turks in 1453, the new rulers converted the Hagia Sofia into a mosque almost instantly. They got rid of the altar and the cross, of the pictures of Jesus and the Saints, and they gave her her own minarets. And so the former church became an archetype for other mosques all over the Ottoman Empire.

A few hundred years later the Ottomans themselves fell, and the Republic of Turkey was established. This time, it was decided that the Hagia Sophia wasn’t supposed to be a mosque or a church anymore. And so she became a museum.

That was until last year. In the summer of 2020, in the middle of the Pandemic, the Turkish government turned the Hagia Sophia once again into a mosque.

A half year later I came walking along from the East, and I loved it.

Here’s how my visit went down: I approached the building from the square, passed a few bored security guards, took off my shoes and placed them in a box. Then I stepped onto the green carpet and into the heart of the Hagia Sophia.

The first thing I noticed were the other tourists. There were so many of us, we were like plankton in an ocean. Then I saw the chandeliers. They were hanging threateningly close to the floor, creating a feeling of pressure, and they were hideous. They were like angry squids to our mass of plankton.

But that was only my initial impression.

I decided to look for a spot next to the wall and sit down. The carpet was thick and comfortable, and I enjoyed the feeling of being a bit more removed from the other plankton and the squids. I sat there for a long time.

At some point the muezzin gave his rendition of the prayer call. He didn’t seem to be very good at it, but a few dozen men came in anyway and gathered where the altar used to be. This was when the security guards told all the tourists and all the women to go behind a fence in the middle of the hall. They were especially serious about the women having to stay behind that fence.

We looked on as the small group of men performed their prayer. They seemed a bit lonely in the vast emptiness under the dome of the Hagia Sophia.

The rest was pure delight. The dome and the columns, the walls and the windows, the tiles and the ornaments, all the things that had gone through so much death and rebirth over the course of almost 1500 years, they were there. They had seen some people crowned and other people slain, and they had waited patiently while men were trying to decide their fate.

So why was I happy that the Hagia Sophia had been turned into a mosque?

Also, the carpet! I can hardly imagine going to a museum and sitting down somewhere on the floor. But in a mosque you can, and I did. It was very relaxing.

Finally, mosques usually have toilets. Well, okay, museums have them, too. But I somehow do enjoy being able to use the bathroom in God’s own house. It feels nice.

So anyway I was wondering if someone could get the Turkish government to convert the Topkapı Palace into a mosque as well. I paid 250 Lira for the ticket, and that place didn’t even have carpet.

The Hagia Sophia from outside: 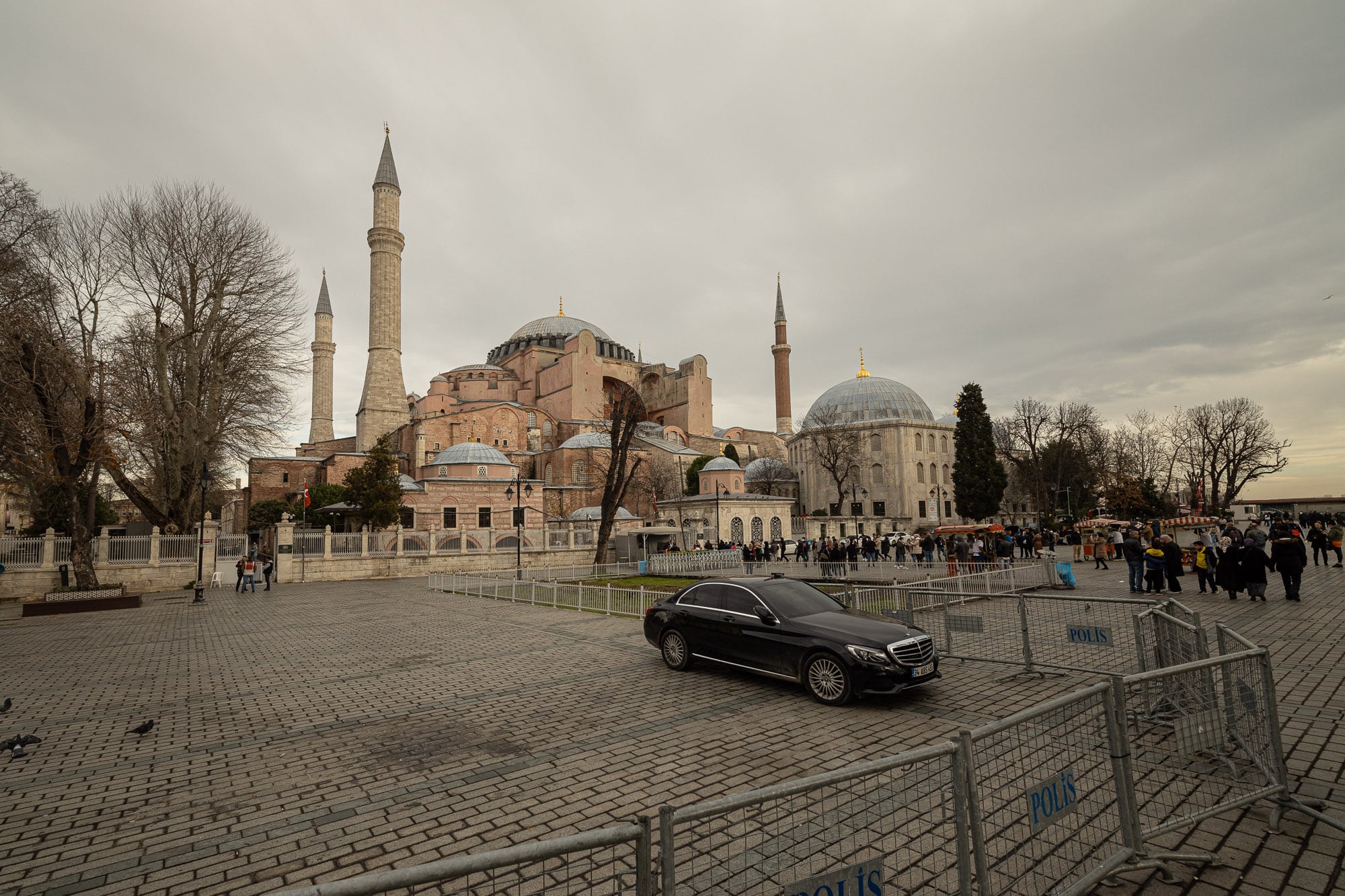 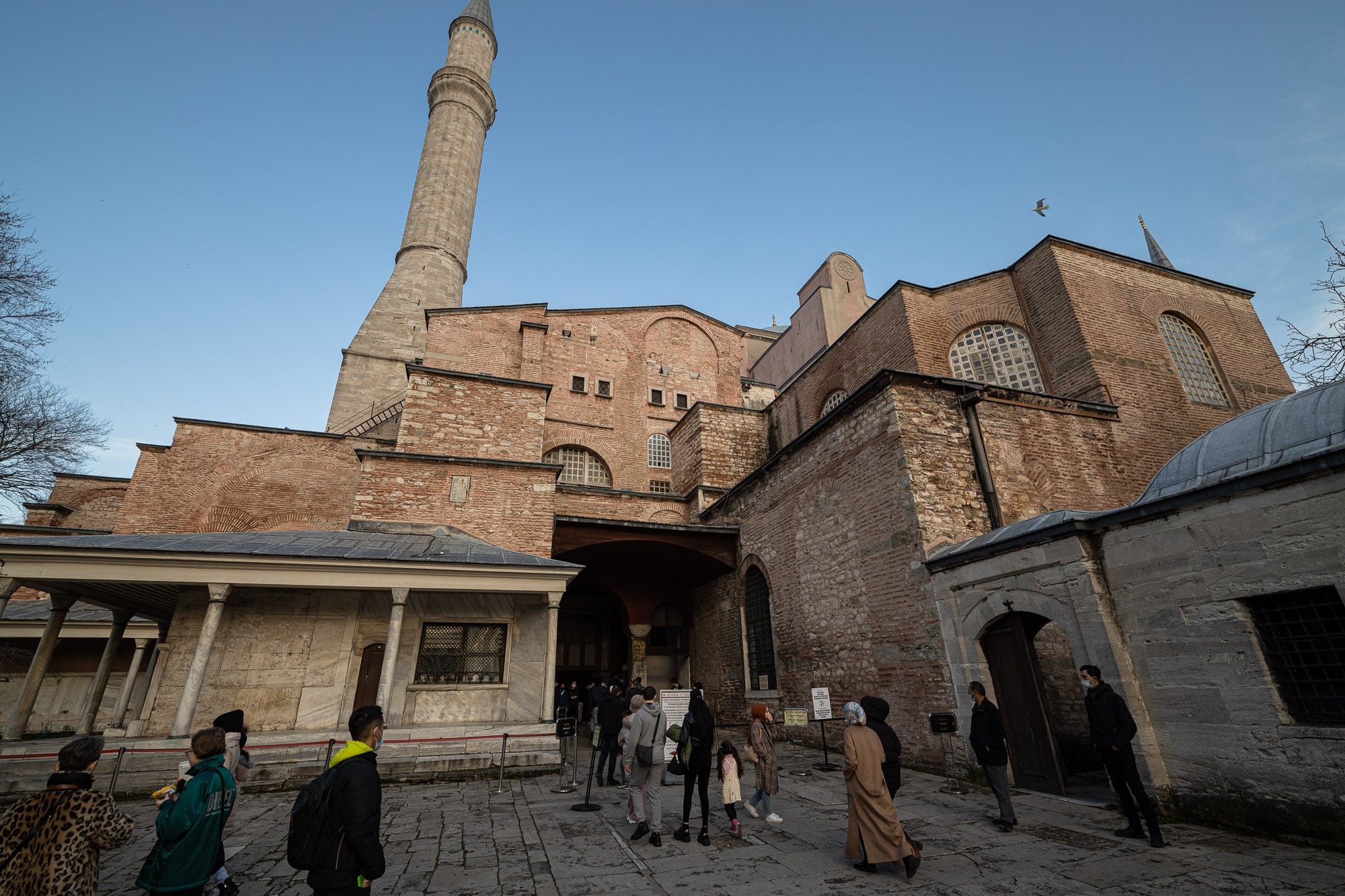 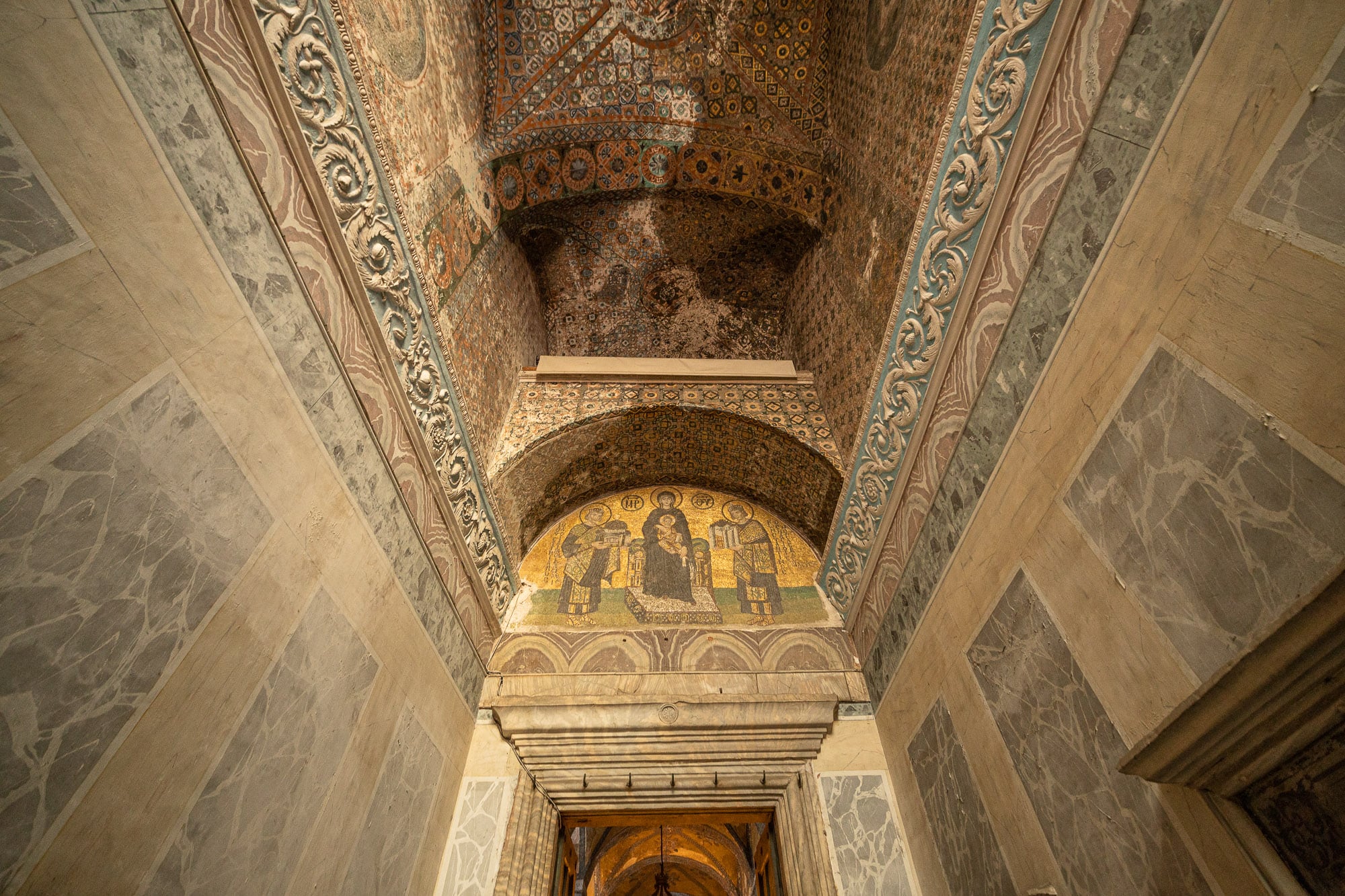 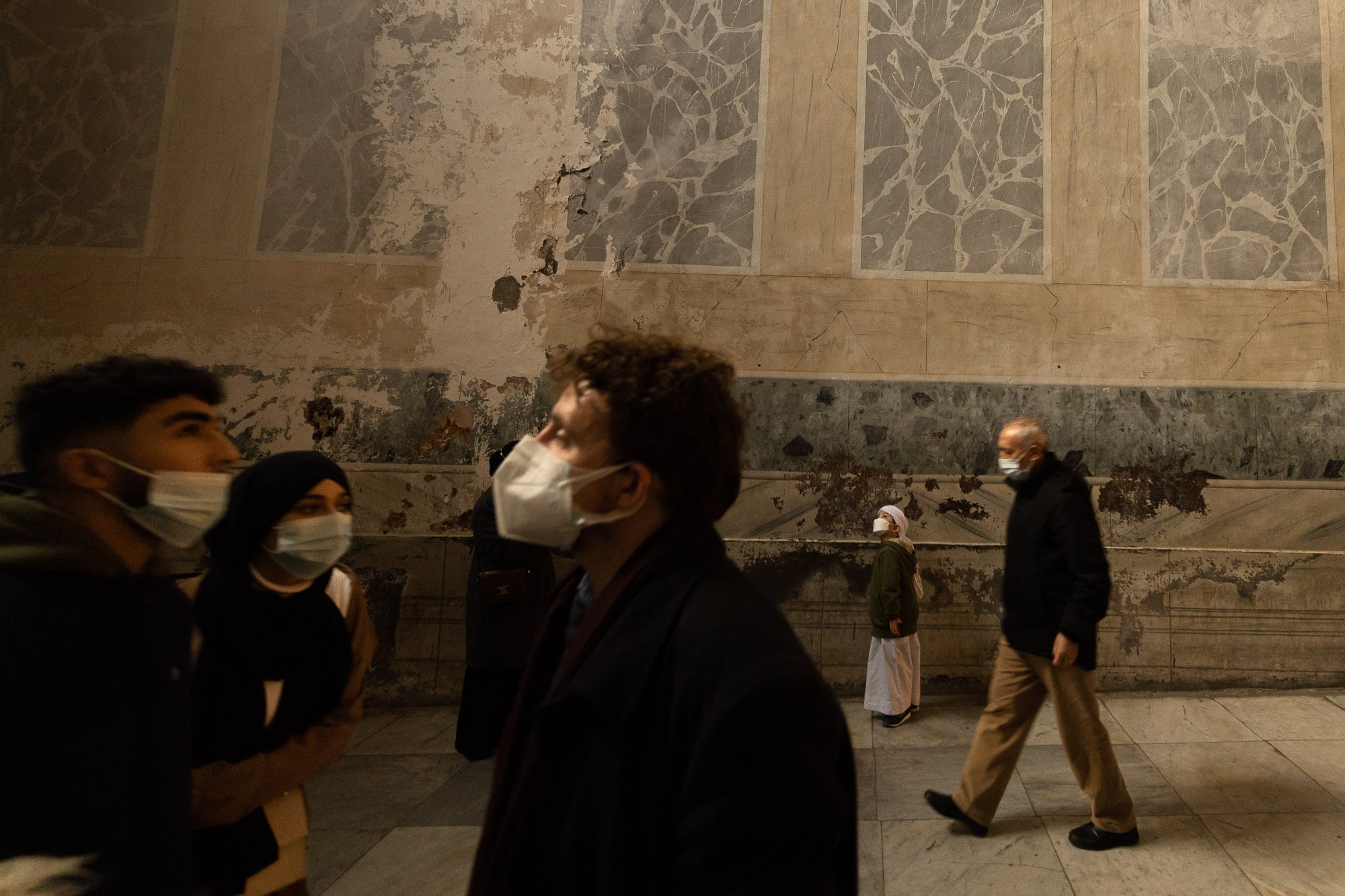 Gates to the inside: 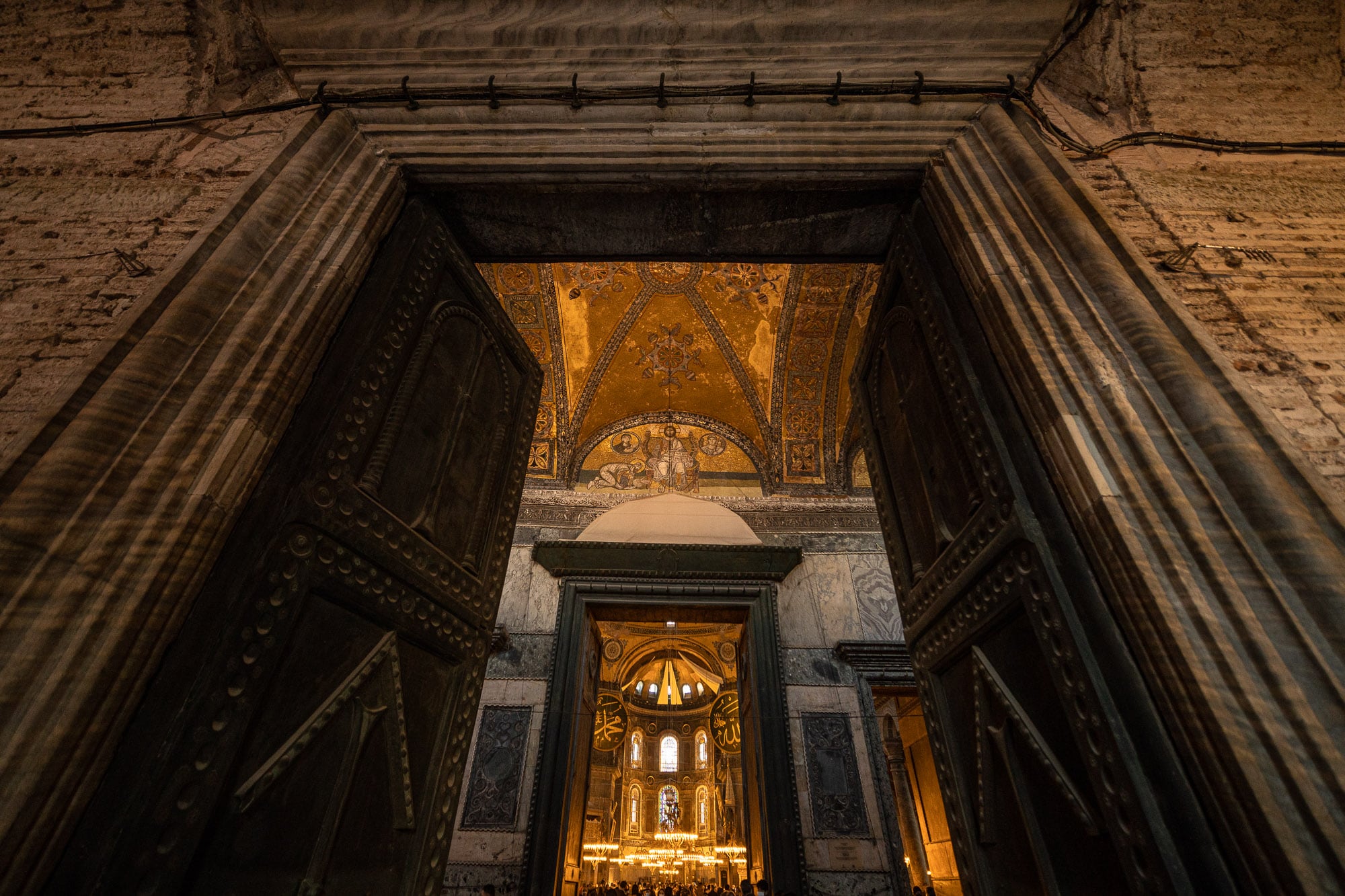 The dome and the chandeliers: 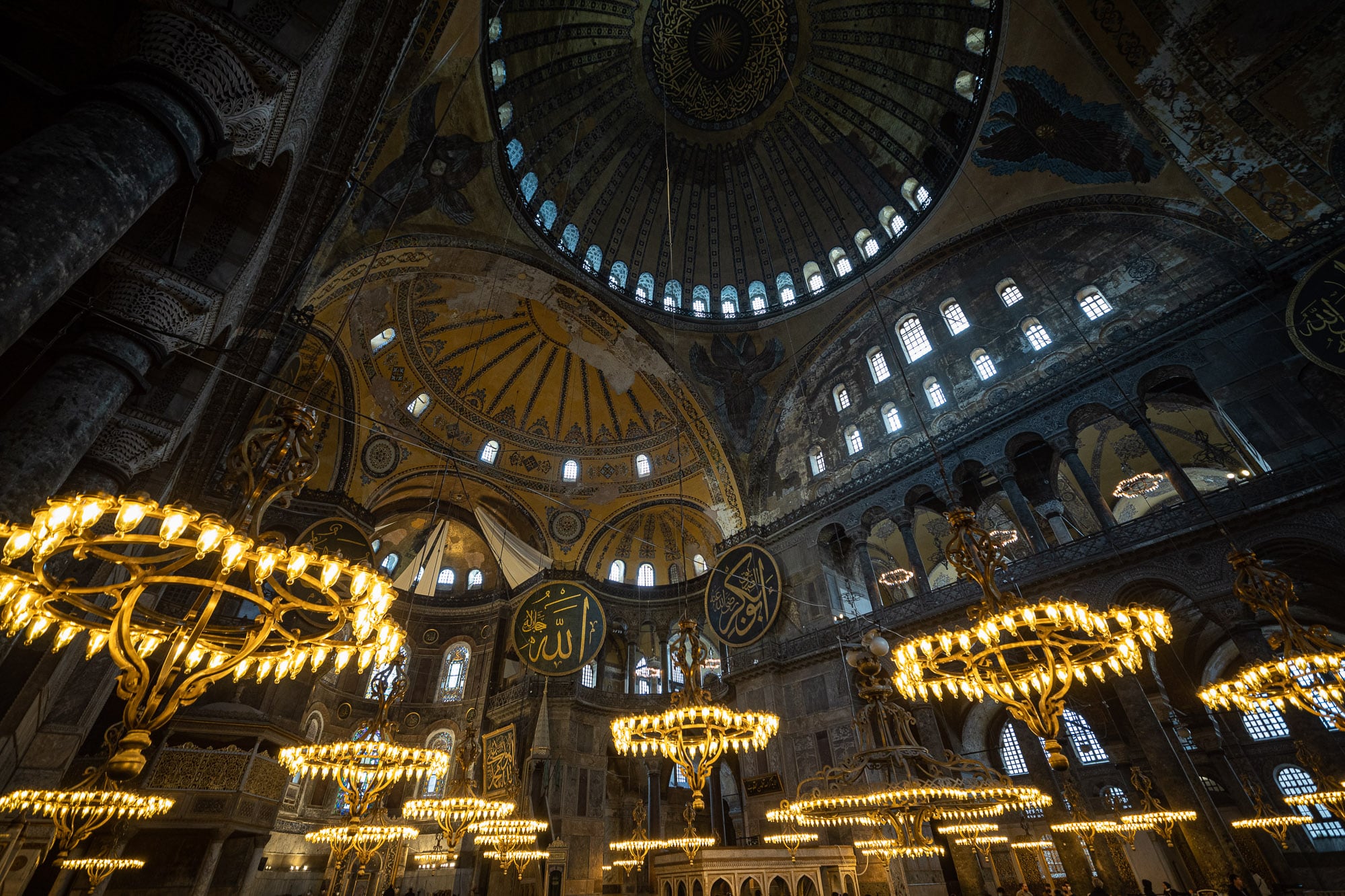 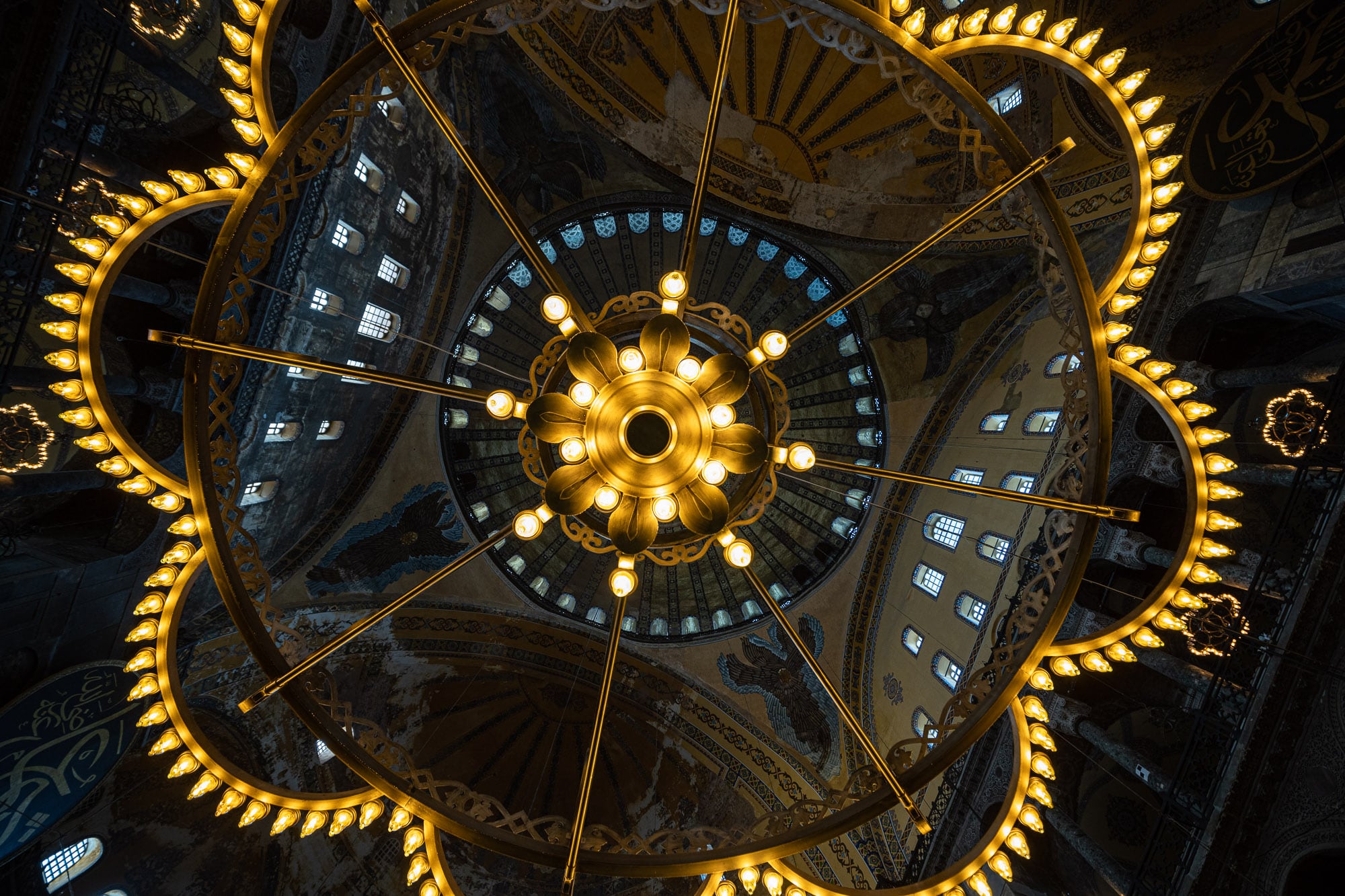 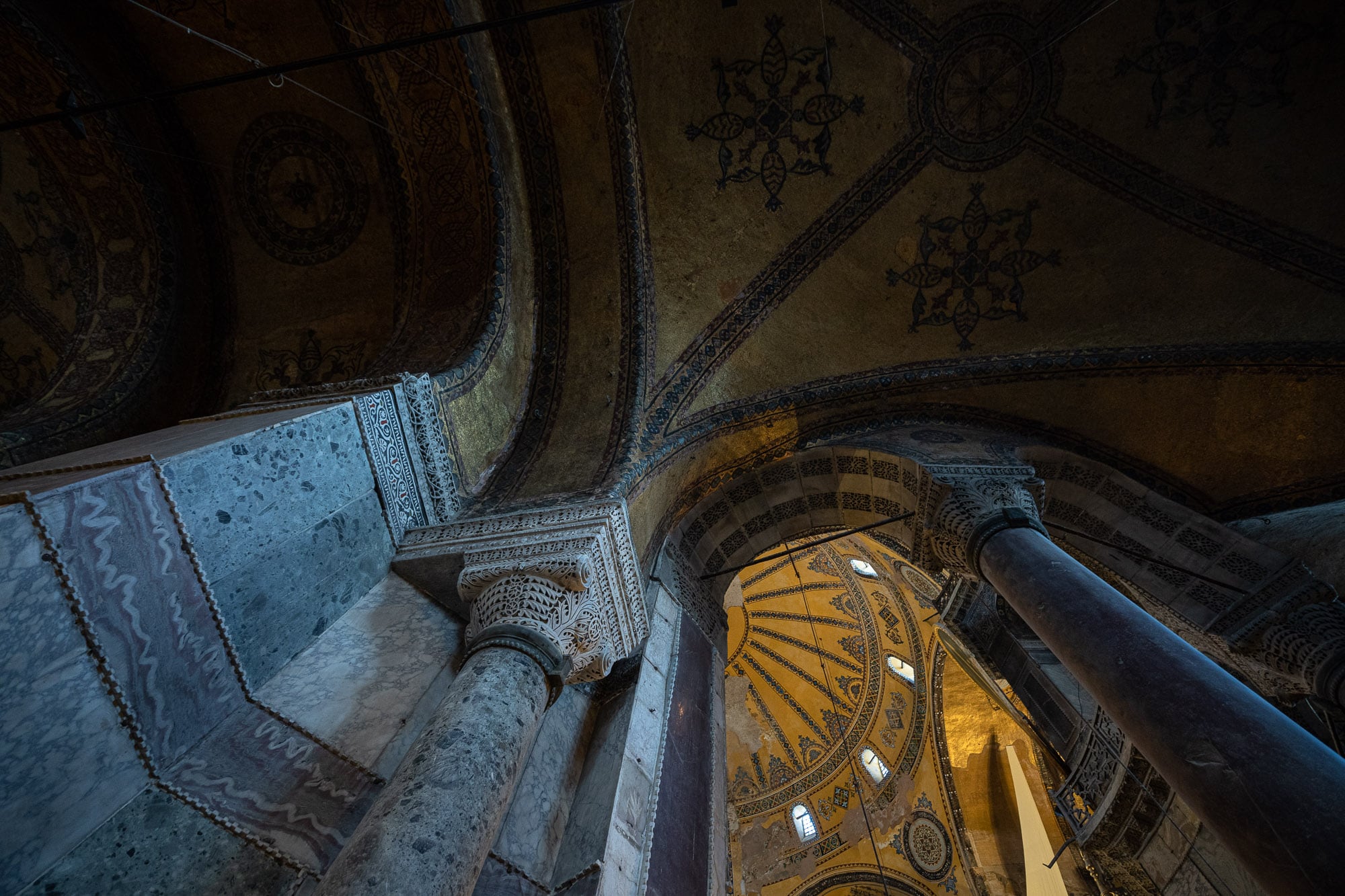 Women have to stay behind the railing during prayer time: 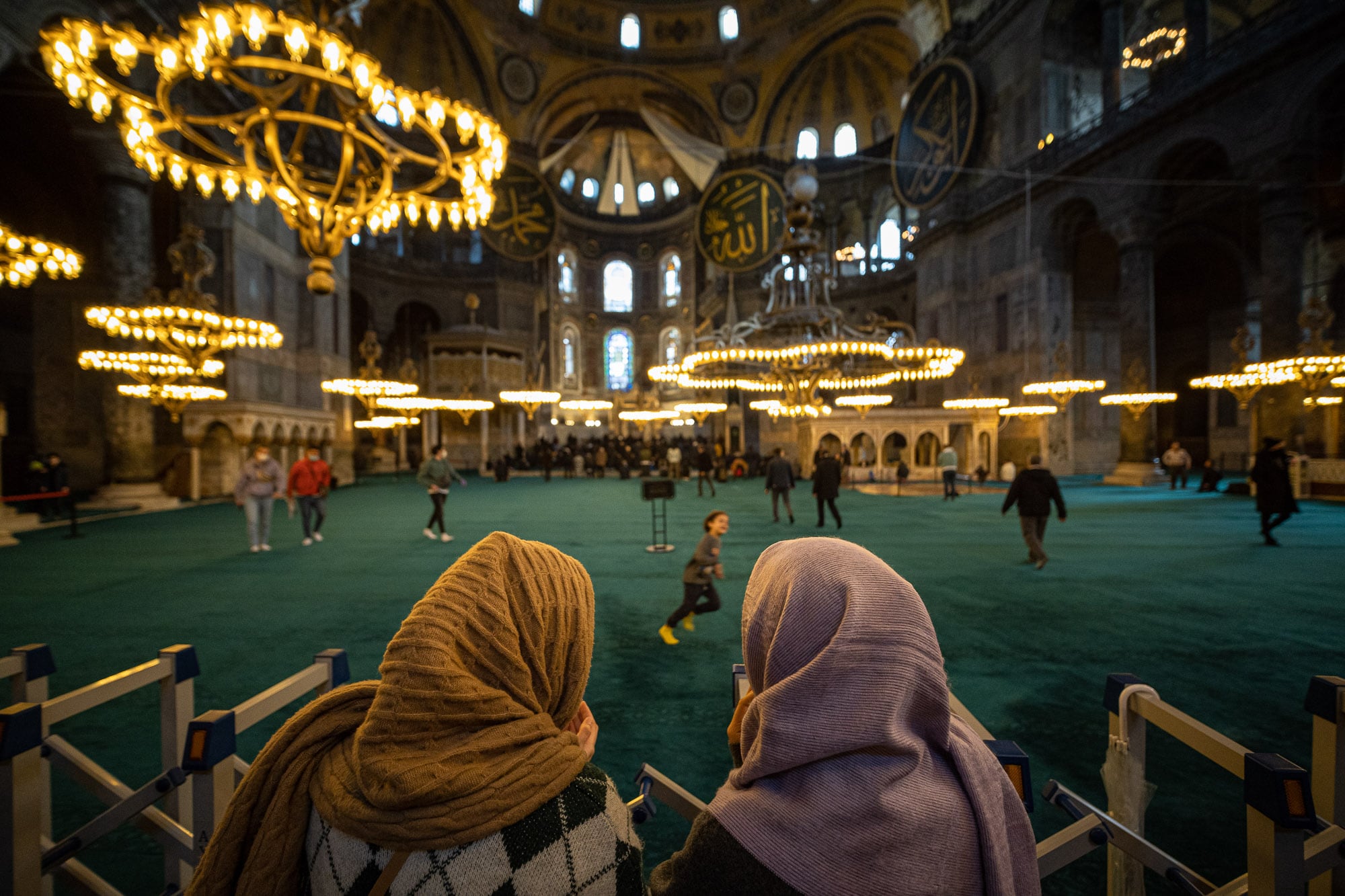 Small group of praying men in the Hagia Sophia: 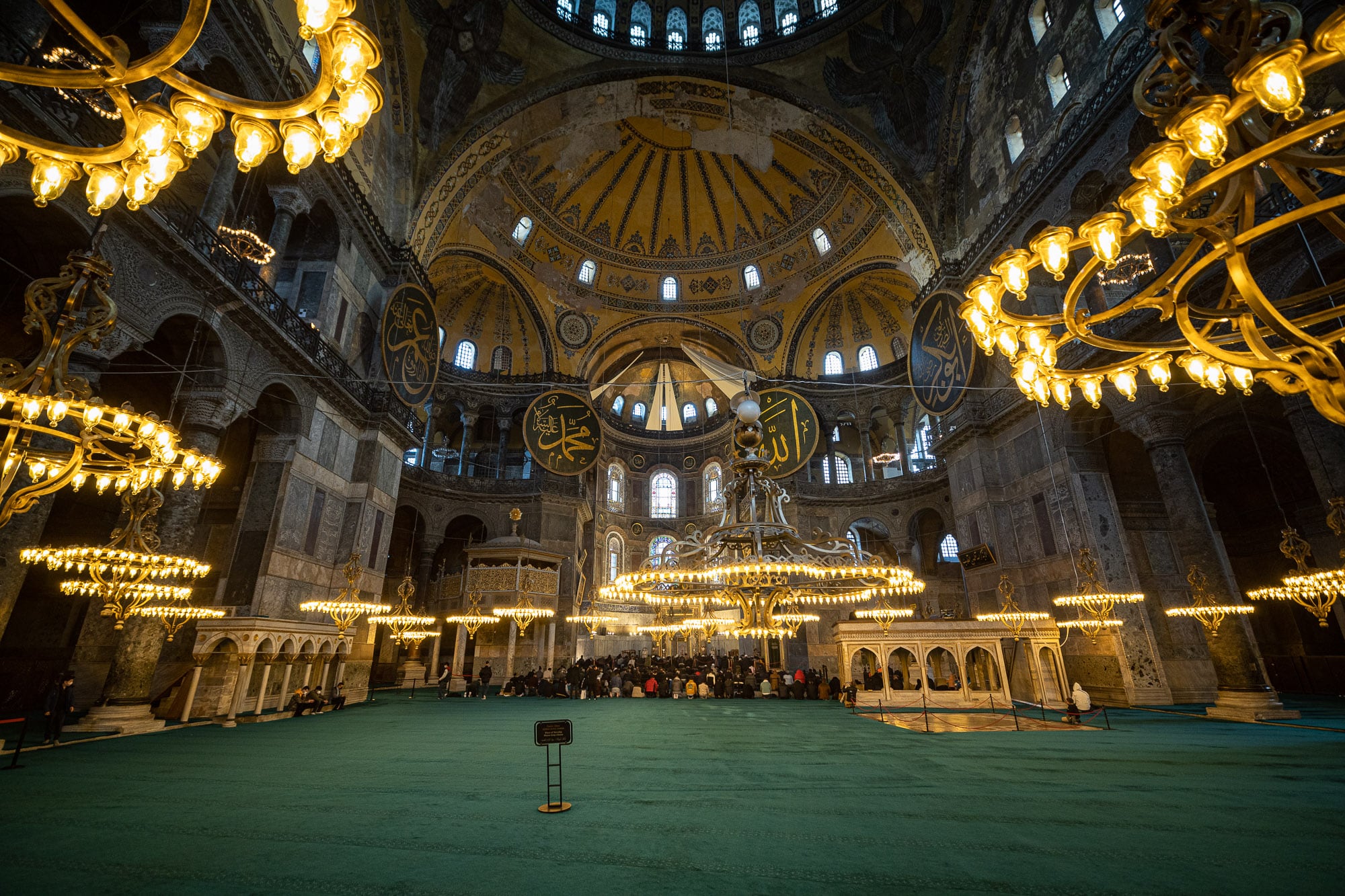 A space for women to pray: 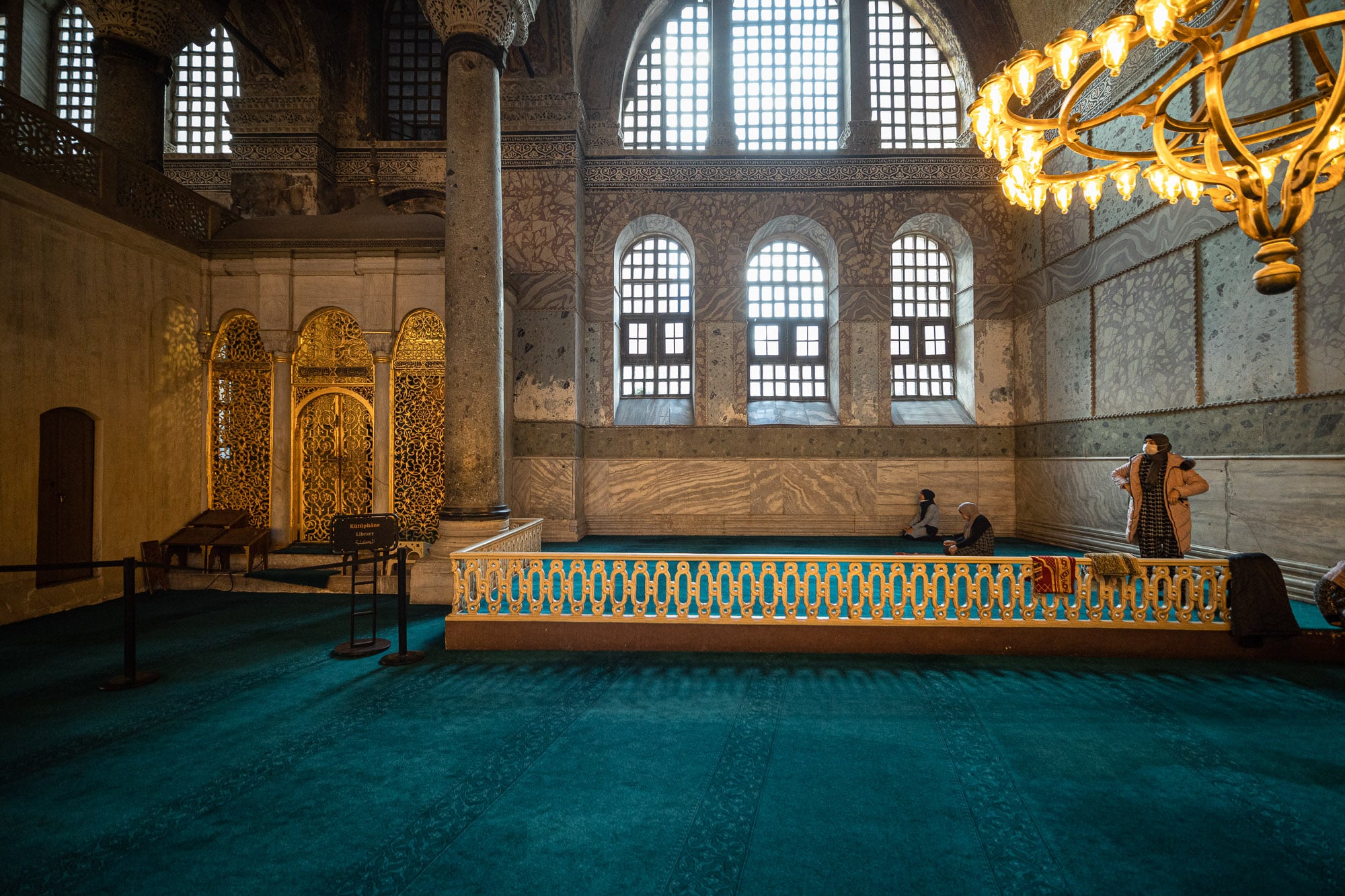 Evening view of the Hagia Sophia: 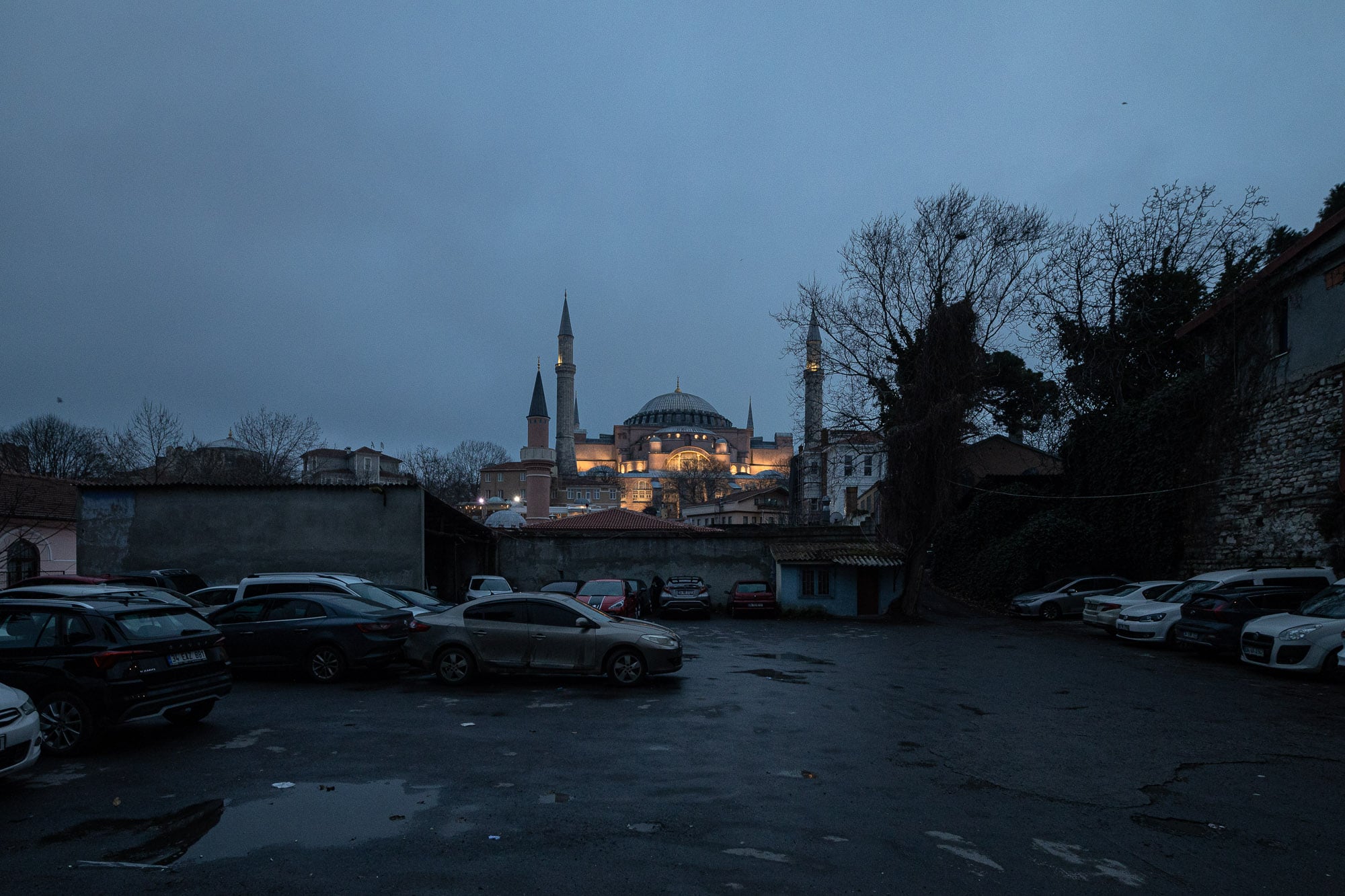