This post is about a walk over the Bosphorus Bridge. I worry about the Caboose and end up almost getting in the way of the Turkish President.

When I crouched down to put the newly repaired wheel back onto the Caboose, I noticed something alarming: the suspension of the wheel was broken. It was unclear to me what had happened and why I hadn’t noticed before, but it was completely snapped in half. I felt as if I had been punched in the stomach.

For a moment I wondered if I should try to find a welder, but then I decided against it. It would take too much time. Also, the wheel hadn’t come off completely – it still had two connections to the frame. And it only needed to hold until after the Bridge.

Walking ever so carefully, the Caboose and I started winding our way through the alleys of Kadıköy. When we reached the shore, the pidgeons and the seagulls were there, and so were the cats and the dogs. Commuters were endlessly boarding and unboarding the ferries. We ignored them. The Caboose and I were on our way to try and walk over the Bosphorus Bridge.

At one point we got lost in the harbor district, and an old shoeshiner gently pointed us back to the way. Then we reached a part of the Bosphorus where people came to relax. There was a coastal promenade and a blue bicycle lane. I could see the Hagia Sophia on the other side of the strait. Tourists were taking photos of each other. The air was mellow and there were thin layers of clouds in the sky.

And then, just like that, the Bridge was there.

I felt a bit intimidated. According to the internet, the Bosphorus Bridge was 1.5km long, and it stood 60m above the water. It looked much bigger than I had imagined. I could see cars going back and forth on it like ants on a human body.

The Caboose and I walked past the tourists and the vendors until we reached a sign that told us to take a right turn. The road went uphill in a curve, and then there was a tunnel. When we came out on the other side there was a moment of confusion, but then a shop owner appeared and gave us directions, a bottle of water, and a candy bar. I shook his hand and thanked him, the last store owner of Asia. Then we were on the Bridge.

Time accelerated greatly after this.

Several police cars were waiting at the beginning of the Bridge, and so was a car from Go Türkiye, the official public relations account of the Ministry Of Tourism. Policemen were standing around talking to each other and into walkie talkies. Everyone looked very busy and very serious.

I handed over my passport and my permission from the Ministry Of Transport. The Go Türkiye team took some pictures while I stood there, conscious of my Santa hat and of the broken Caboose.

“Quick!” someone said: “You have to start walking NOW, and you cannot stop on the Bridge, do you understand?”

It was explained to me that the Turkish President was due to arrive with his motorcade in less than an hour, and they really wanted me gone before that.

But maybe, I pleaded with them, maybe I could stop for just a little bit and take some pictures of myself on the Bridge?

Someone looked at me and nodded, someone else nodded as well, and the Go Türkiye team asked me a few questions that I answered stupidly (“What was your most unforgettable experience while walking through Turkey?” – Uh… erm… when the Imam’s cat came into my tent to keep me company?). Then, while I was still talking, a policeman said “Go! Go! Go!” and hushed me onto the sidewalk that led to the Bridge.

And just like that we were on our way. I could not believe it: the Caboose and I were really walking over the Bosphorus Bridge from Asia to Europe.

And we were not alone. There was a plainclothes police officer following us, and behind him, a motorcycle cop and a police car. The plainclothes officer had the air of a man who was in charge, the police car’s blue lights were flashing, and the motorcycle cop was wearing very large reflecting sunglasses.

The Caboose was rolling behind me, and slowly, ever so slowly, it dawned on me that this really was the last bit of Asia under us and around us, as we were making our way west, toward the blue water. 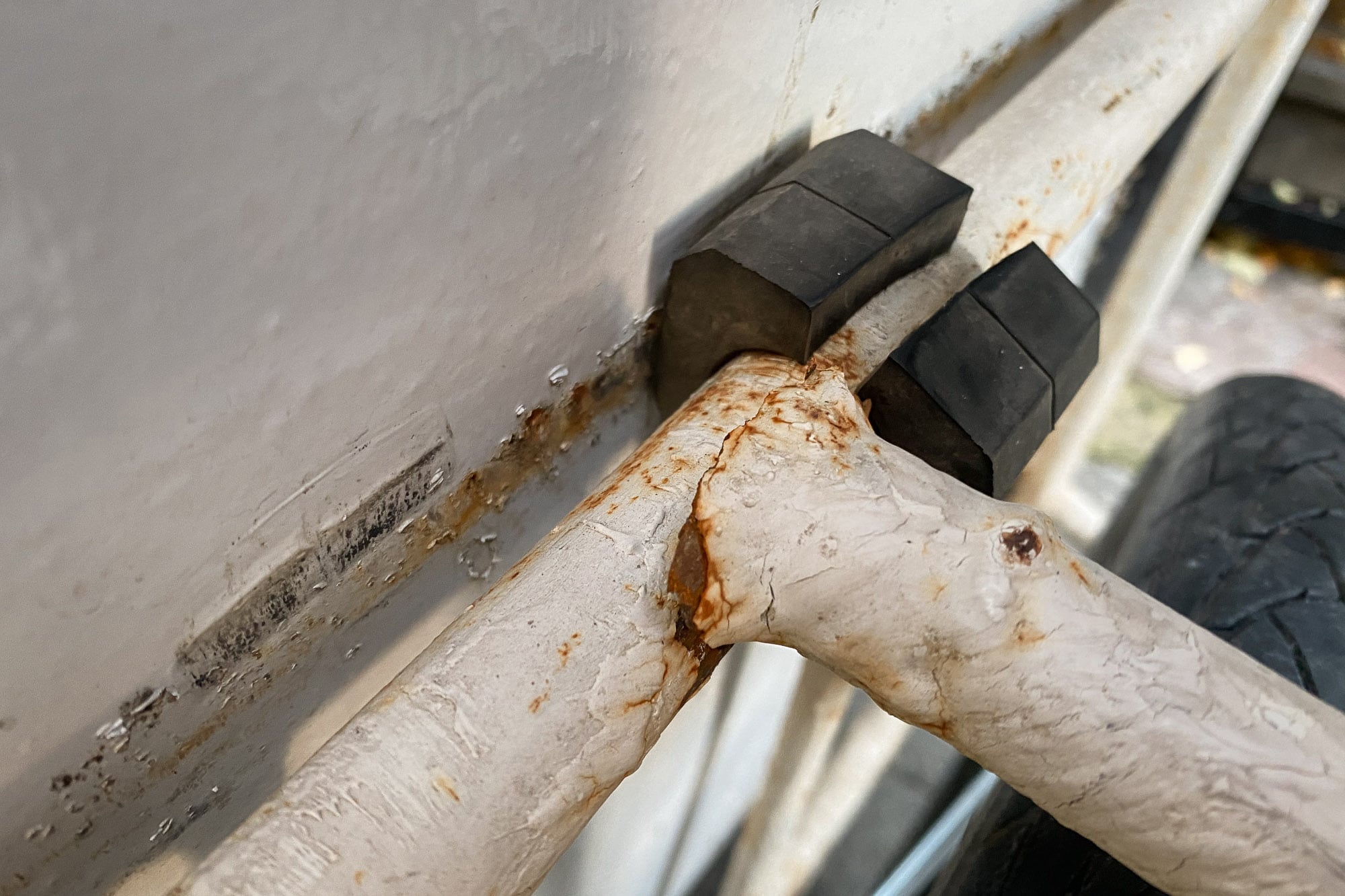 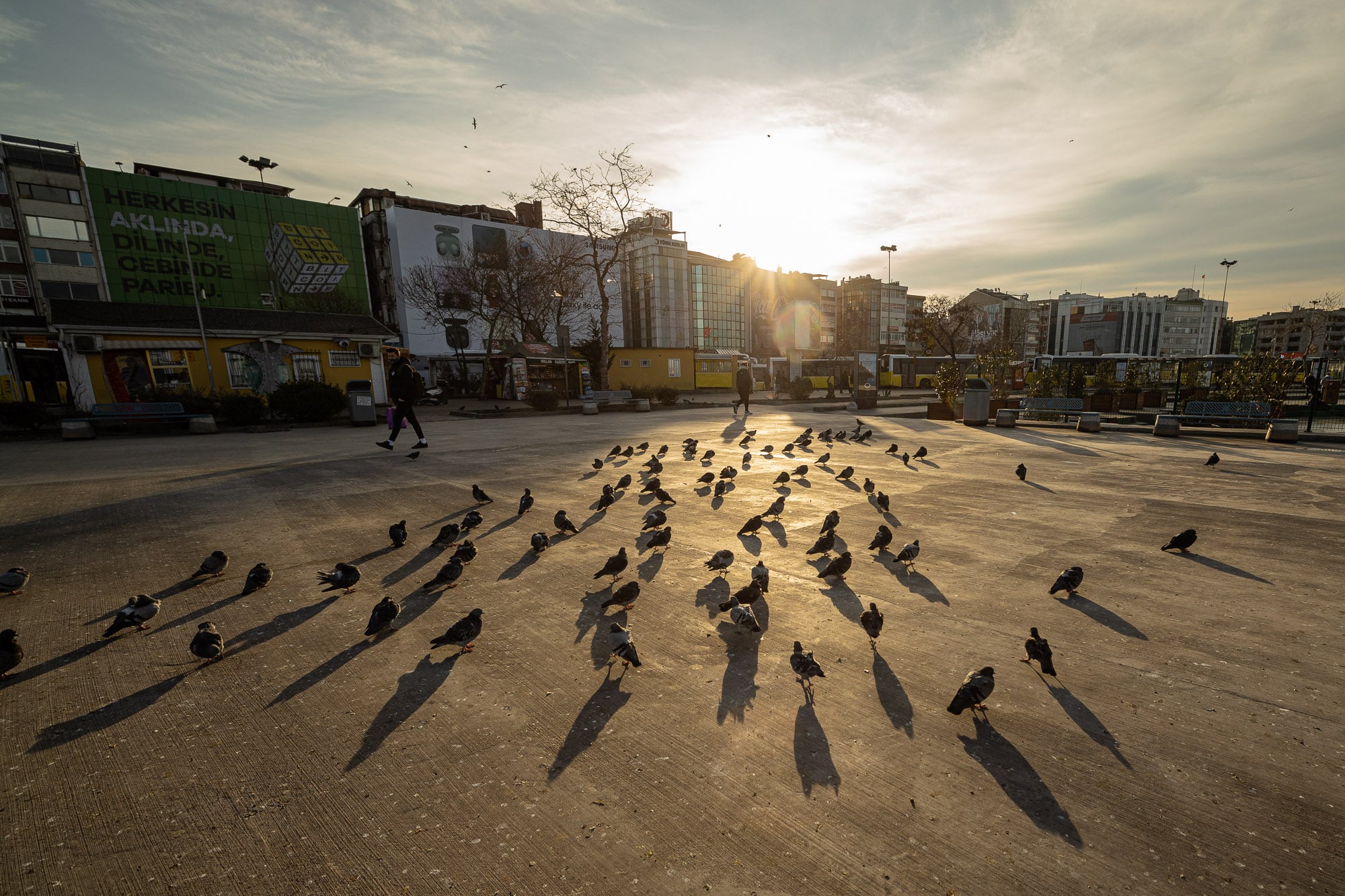 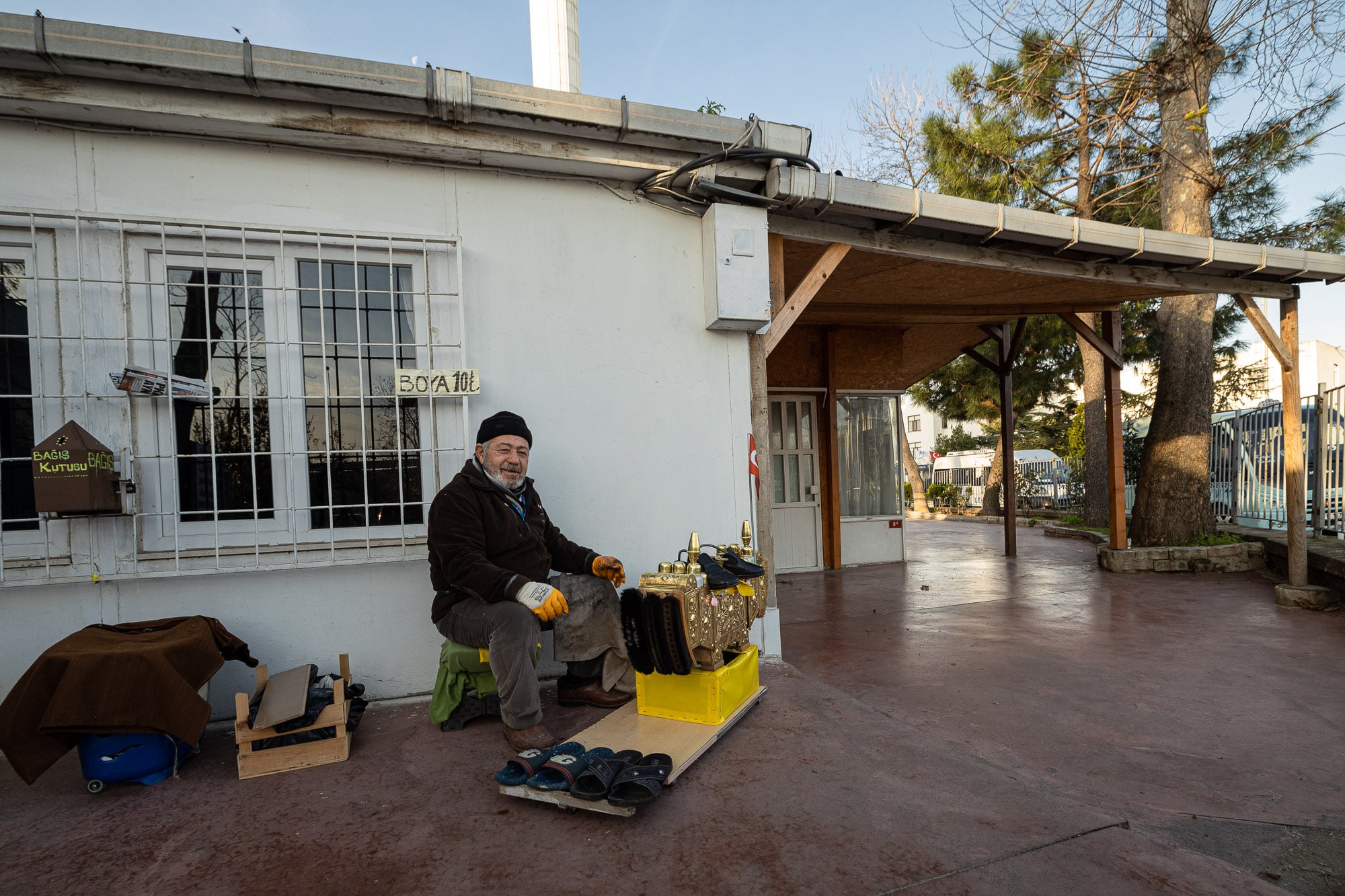 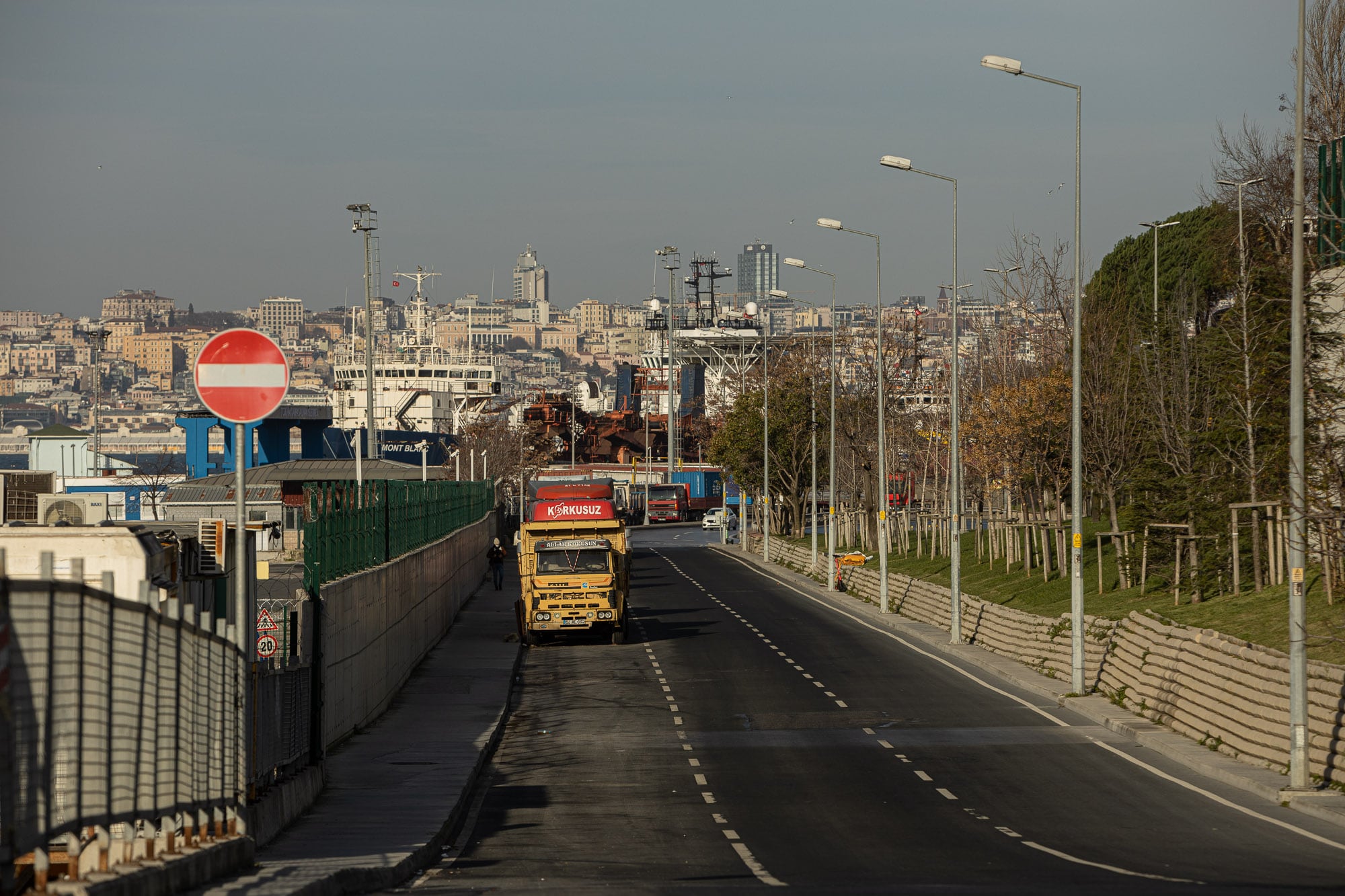 Cat on the Asian side: 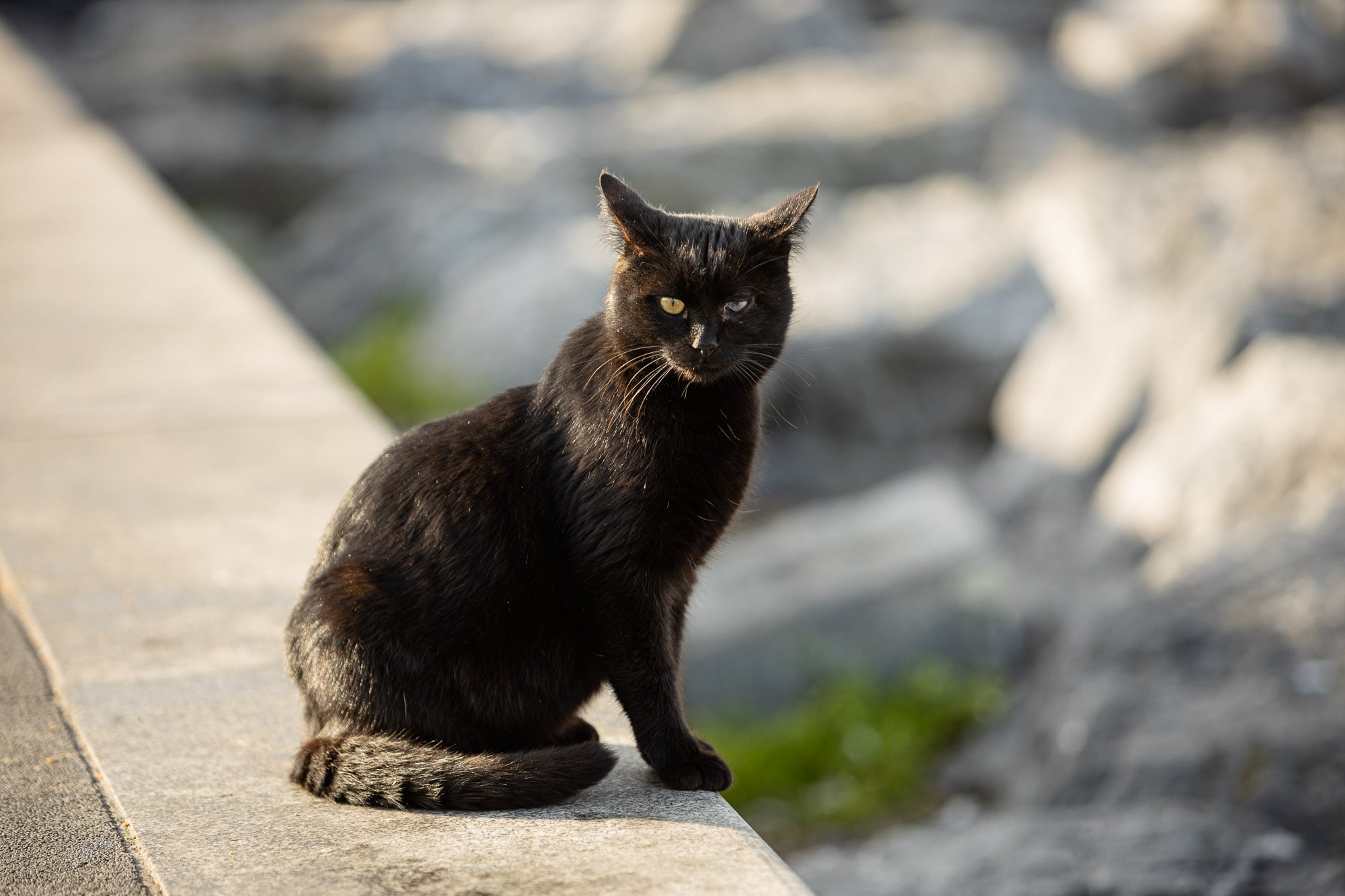 Hagia Sophia from across the Bosphorus: 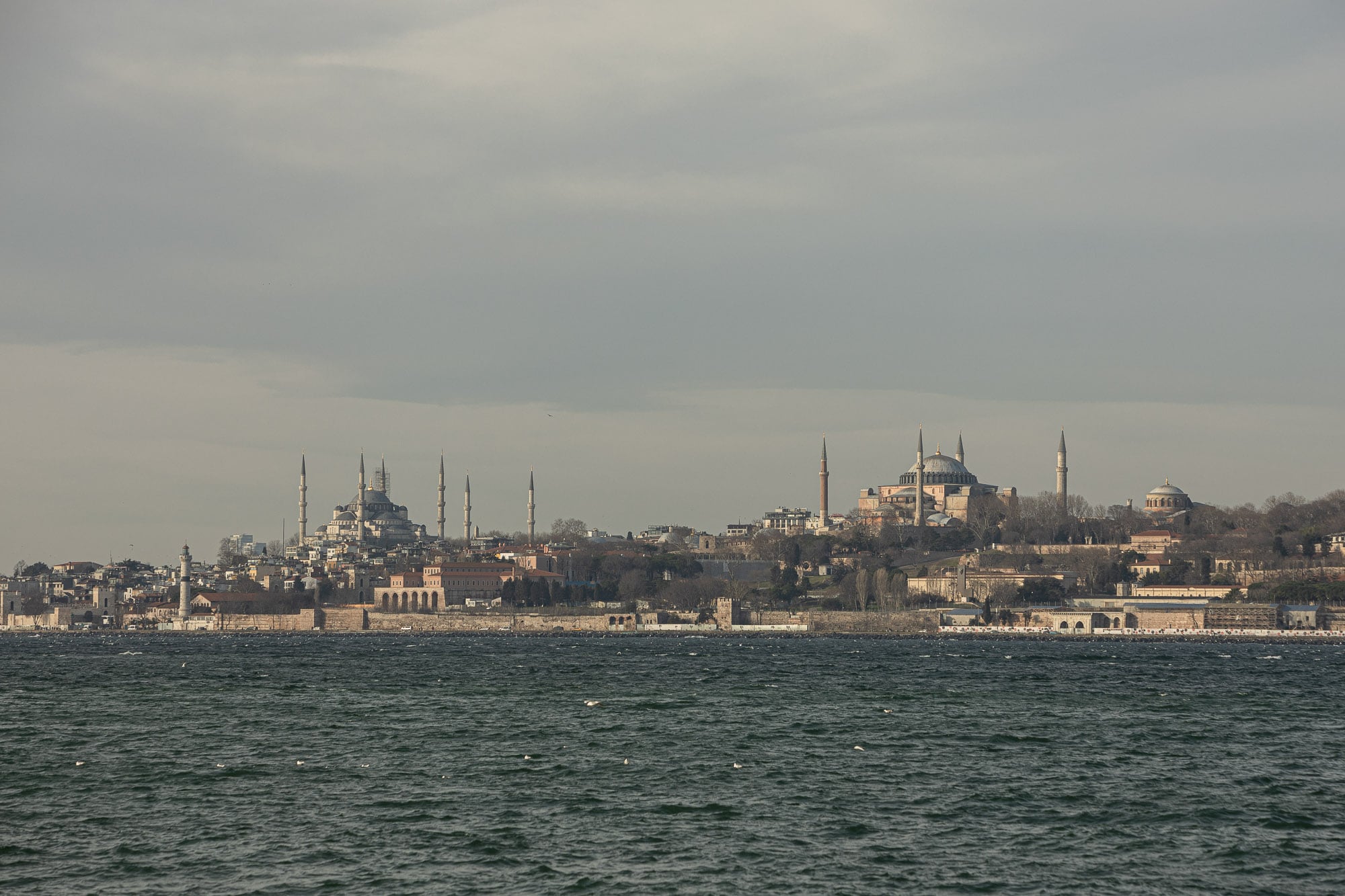 Bike lane along the Bosphorus: 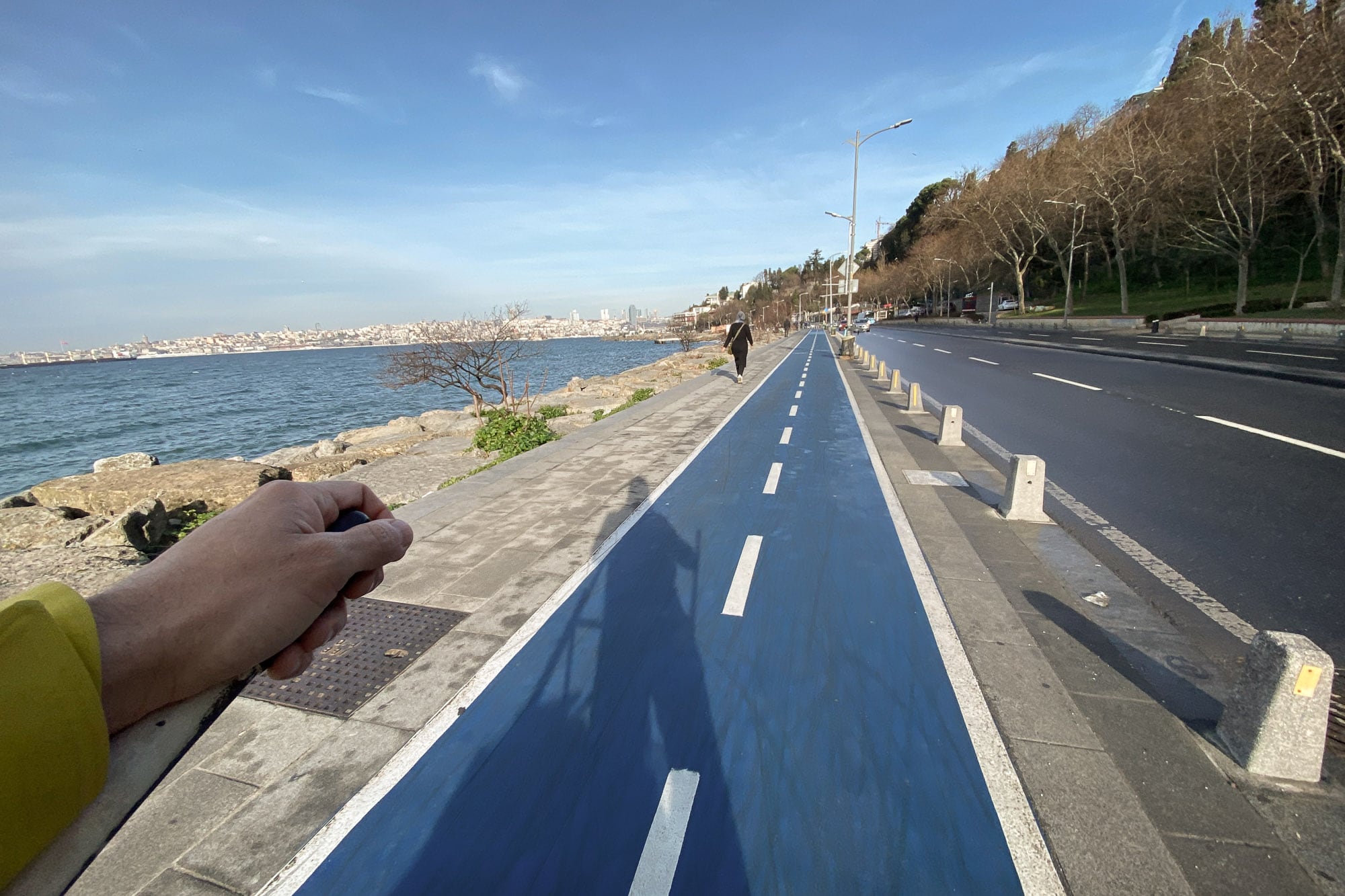 The Caboose on the shores of the Bosphorus: 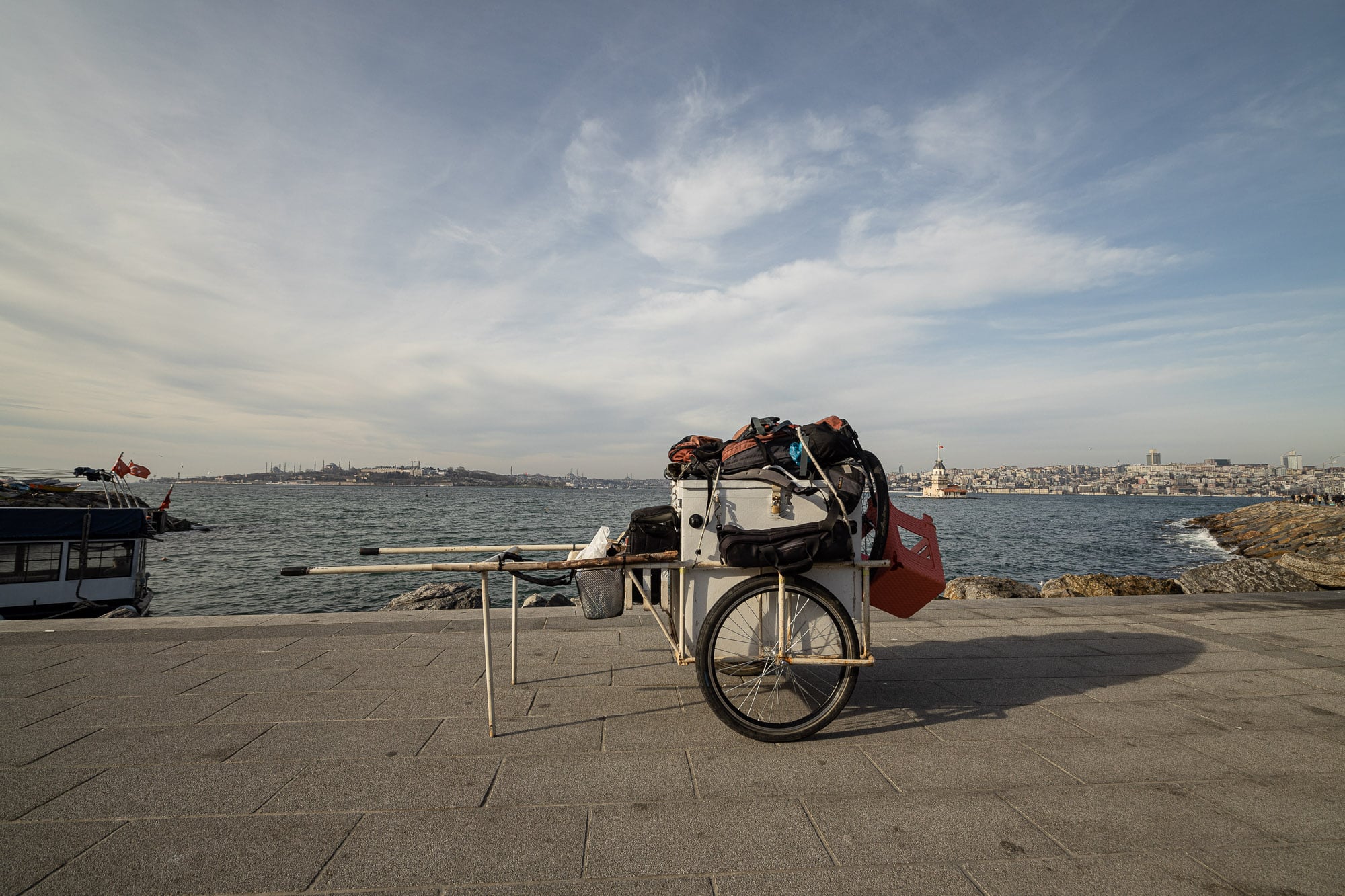 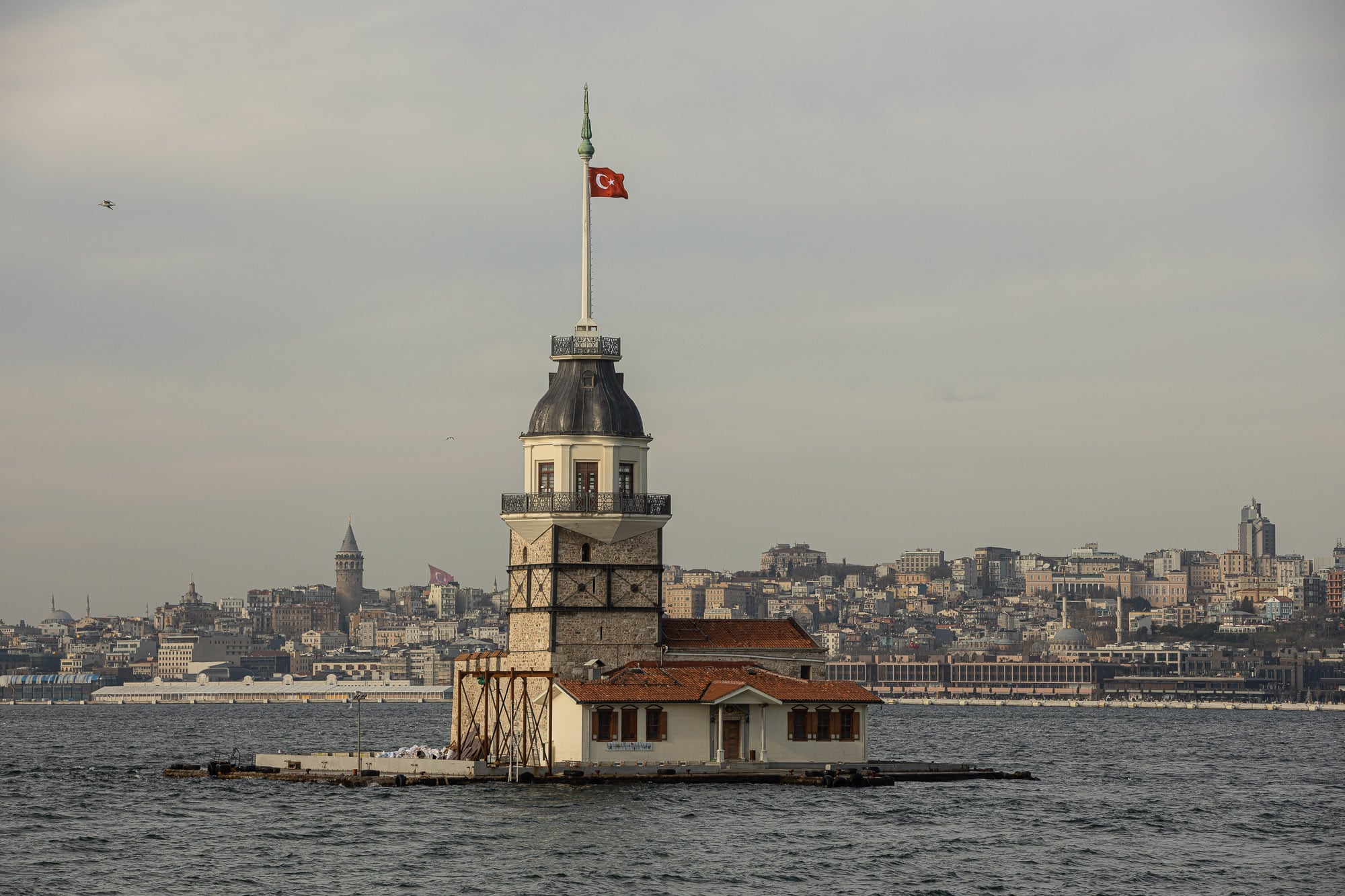 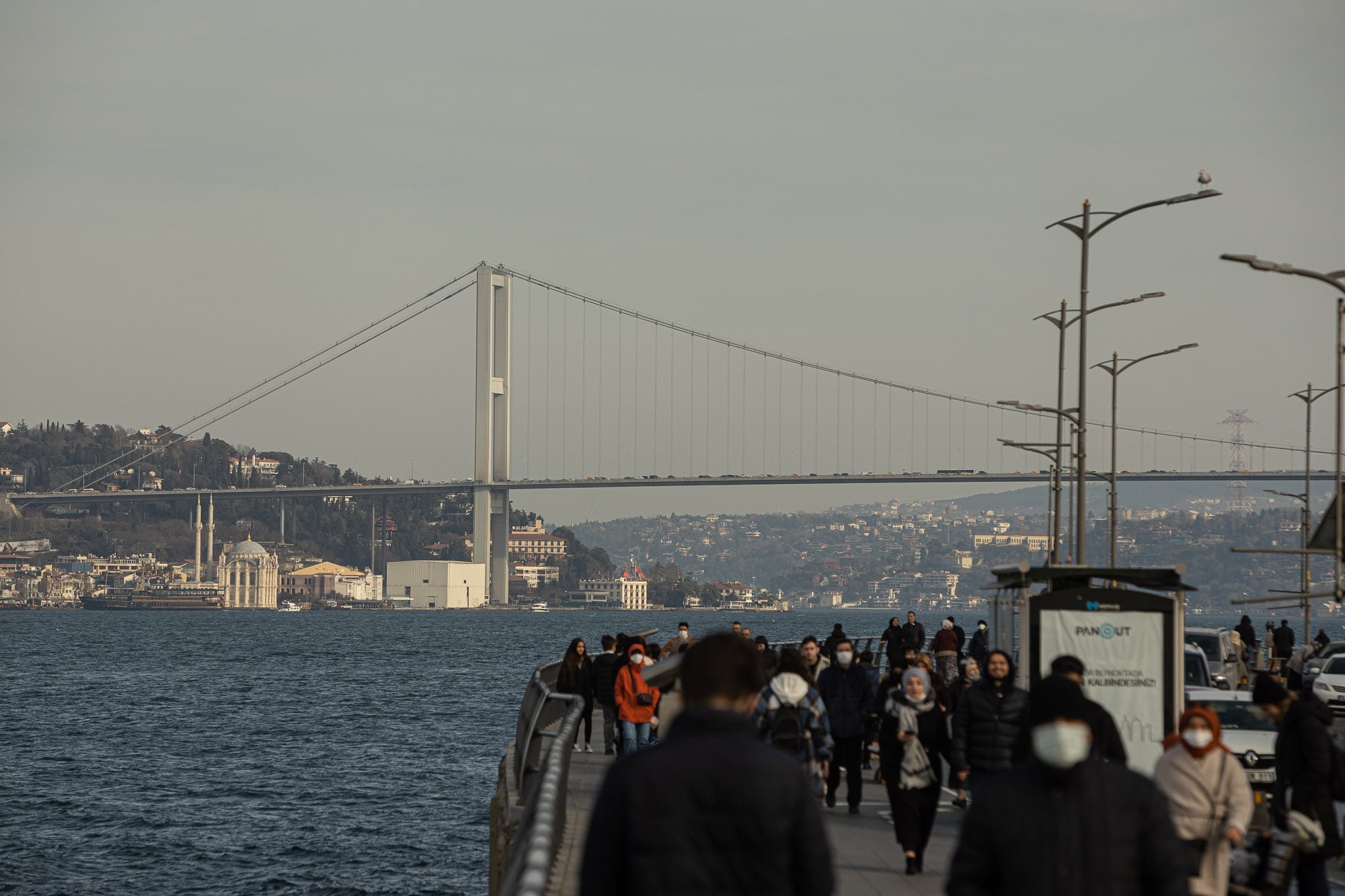 People who are presumably relaxed (unlike me): 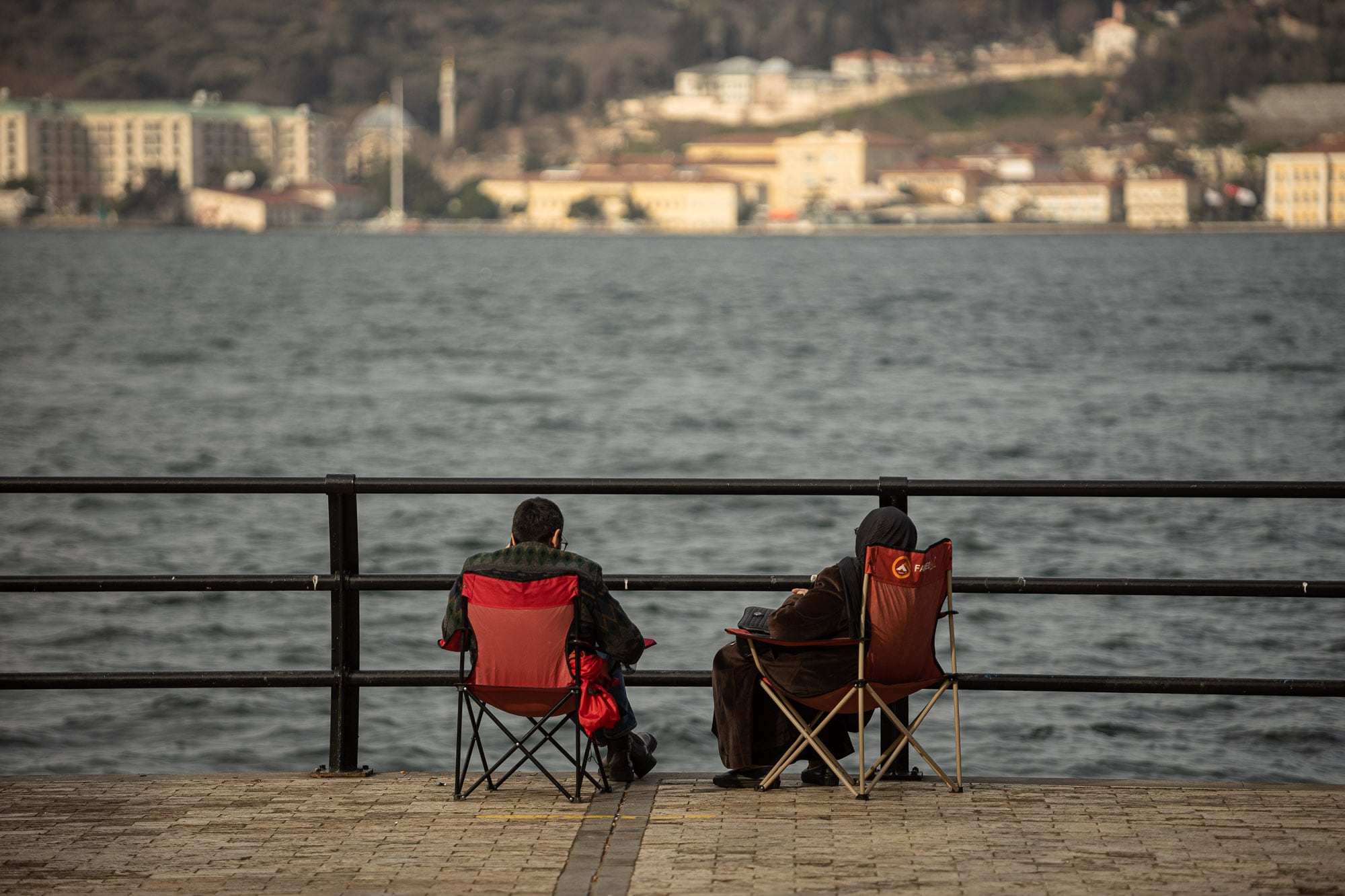 The tunnel before the Bosphorus Bridge: 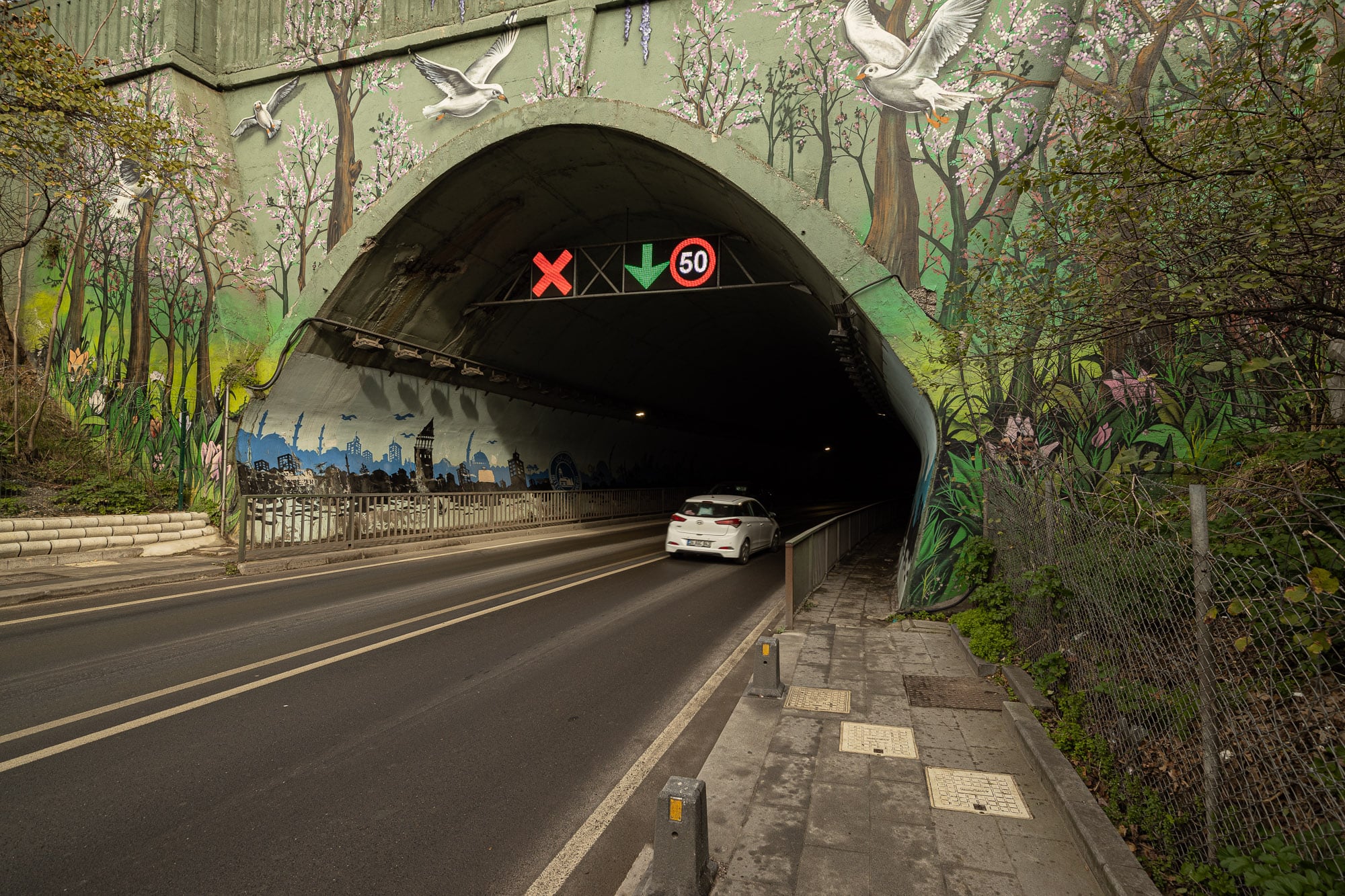 The last little roadside shop on the Asian side, where the owner gave me a bottle of water and a candybar: 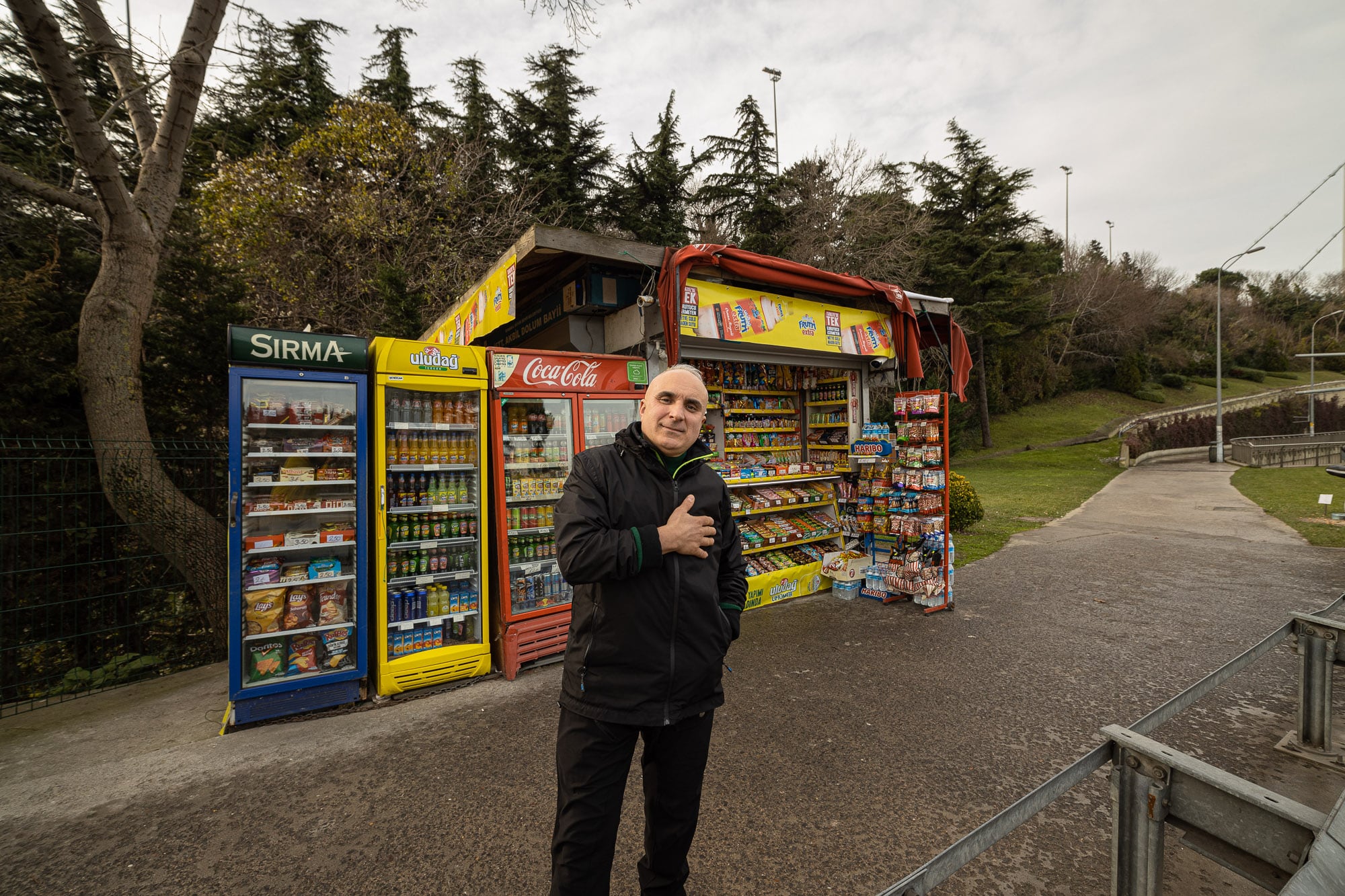 A walk over the Bosphorus Bridge 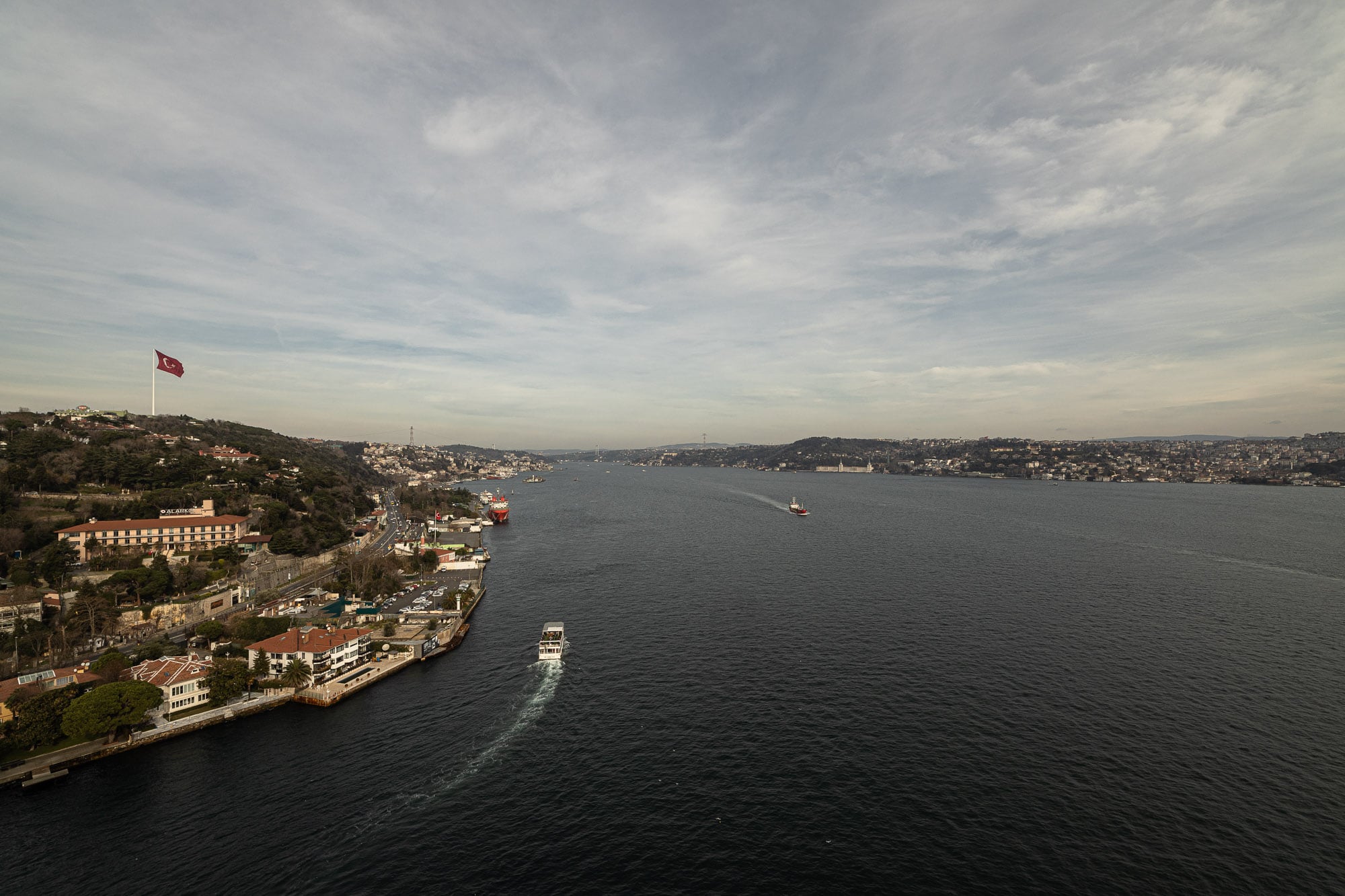 The Caboose on the Bridge: 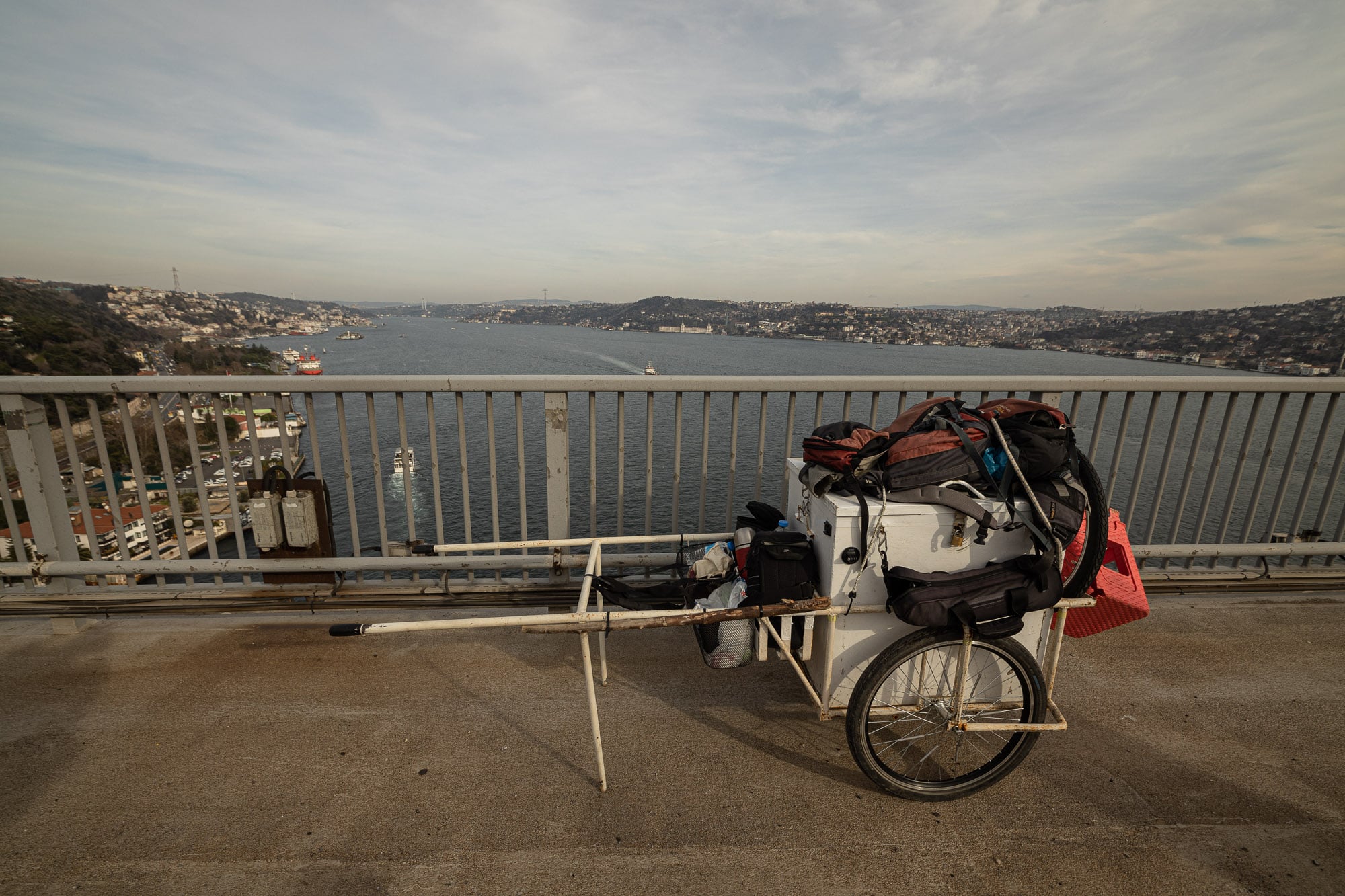 And this is the self portrait of the moment I walked from Asia to Europe: 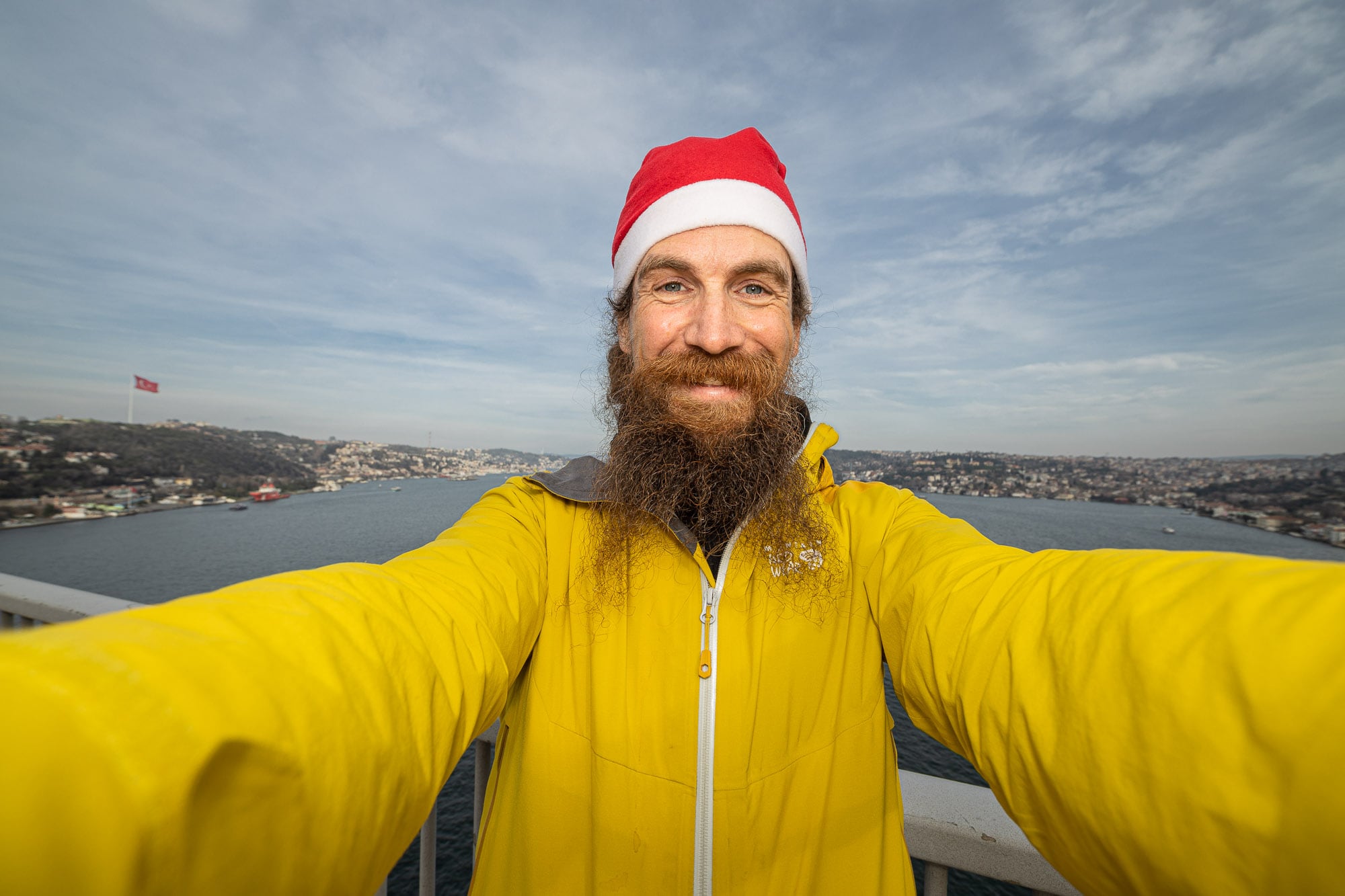 Trying to get off the highway on the European side: 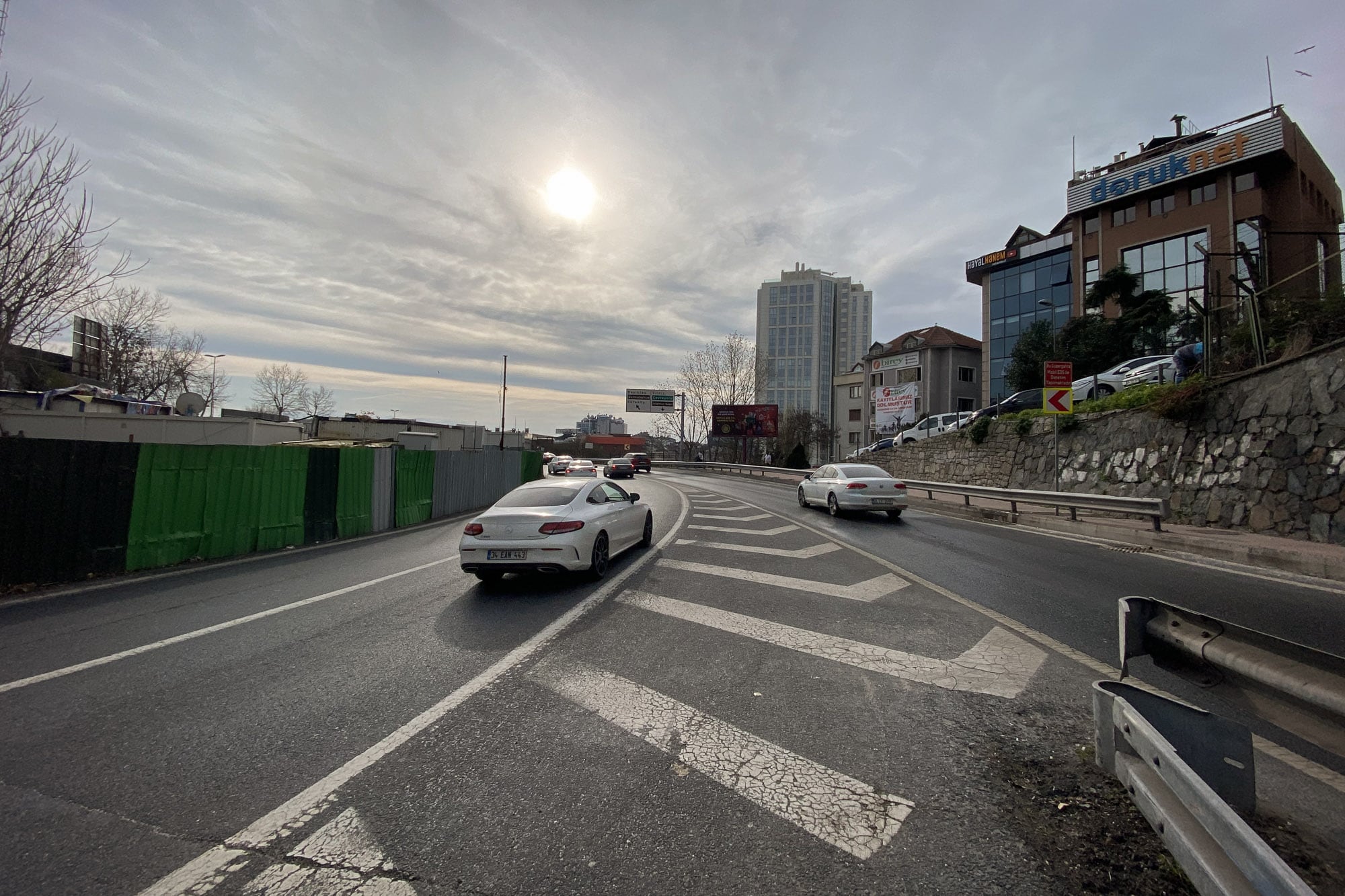 My first cup of tea in Europe: 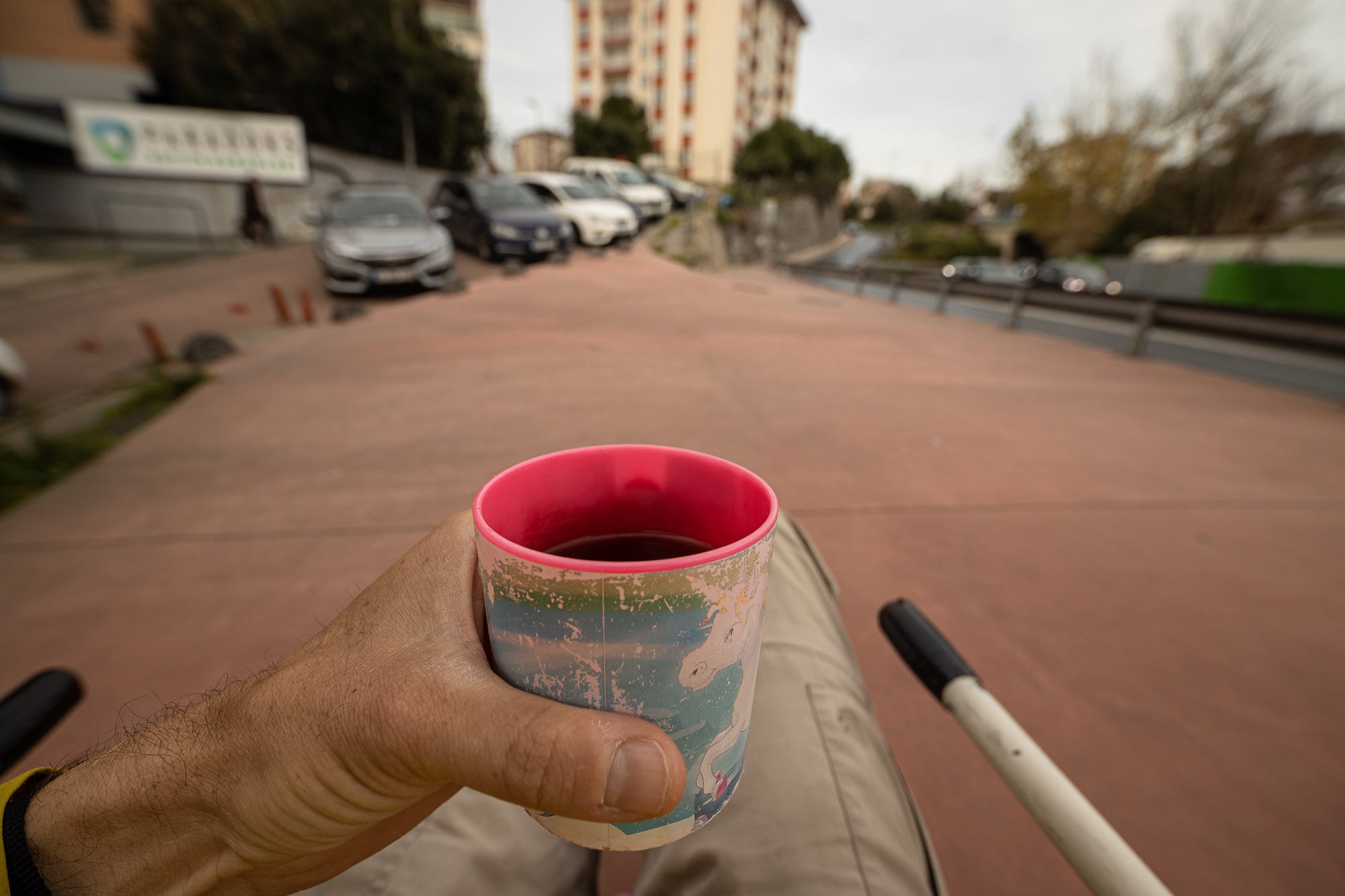 There are cats here, too: 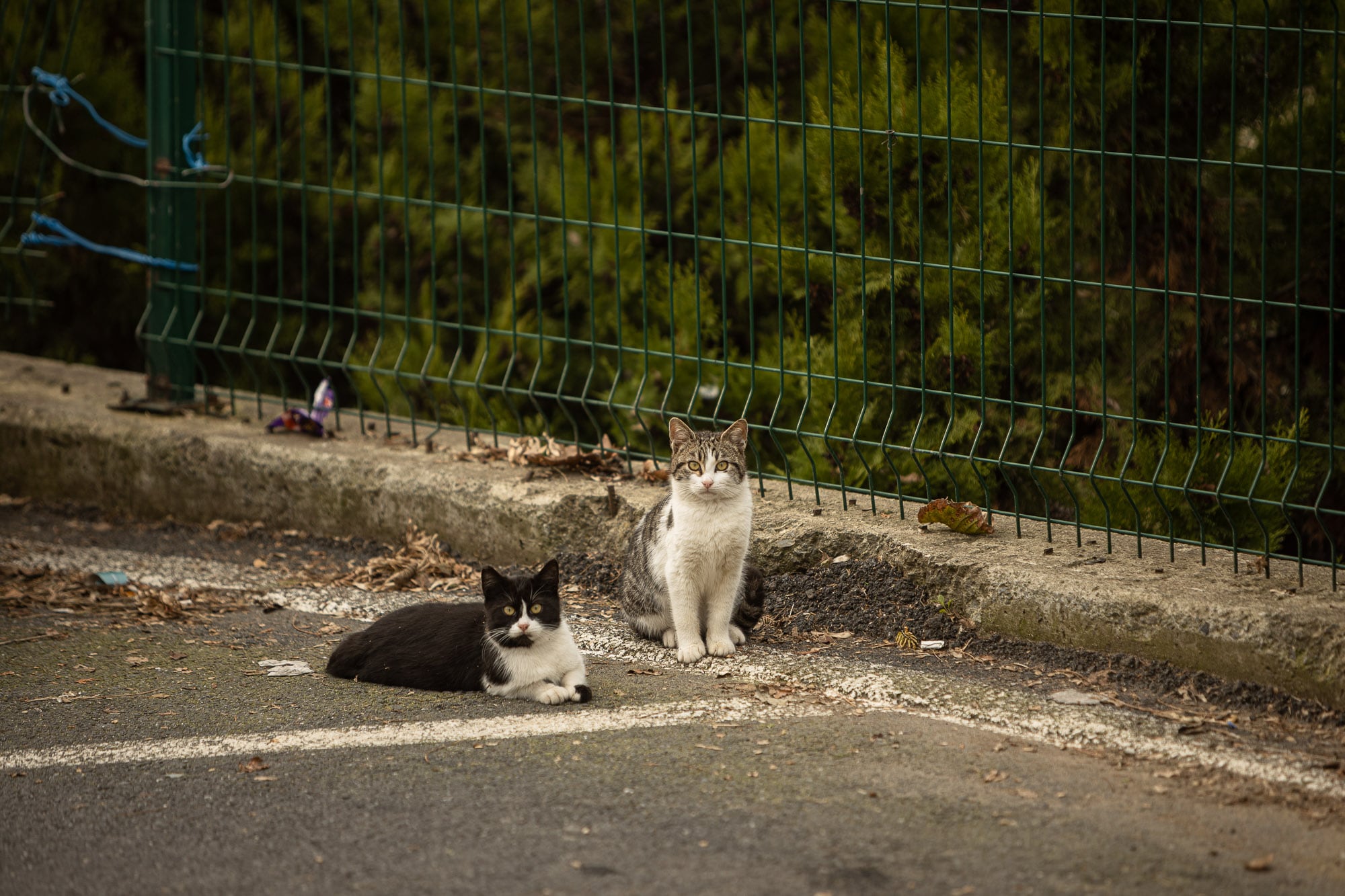 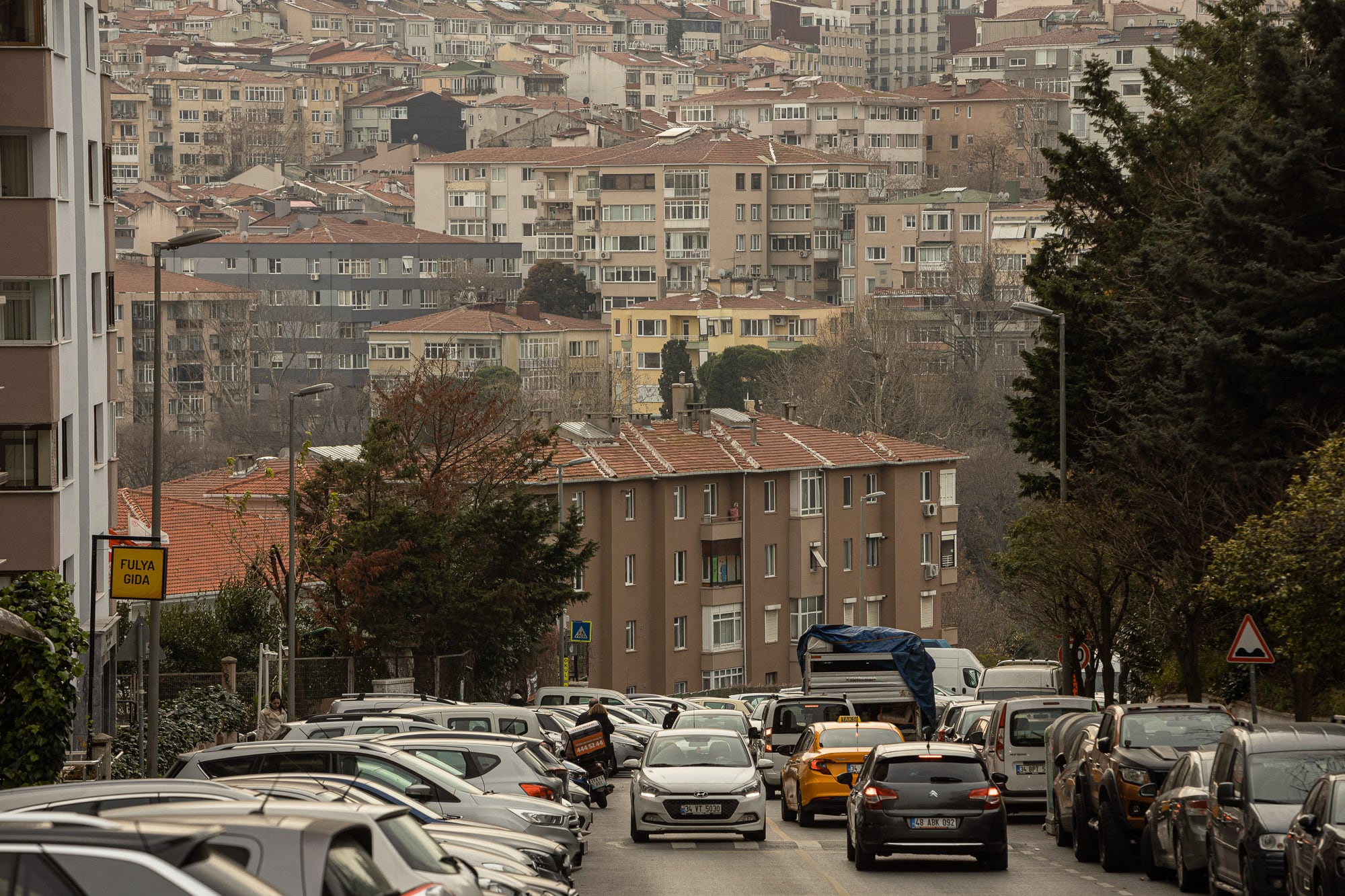 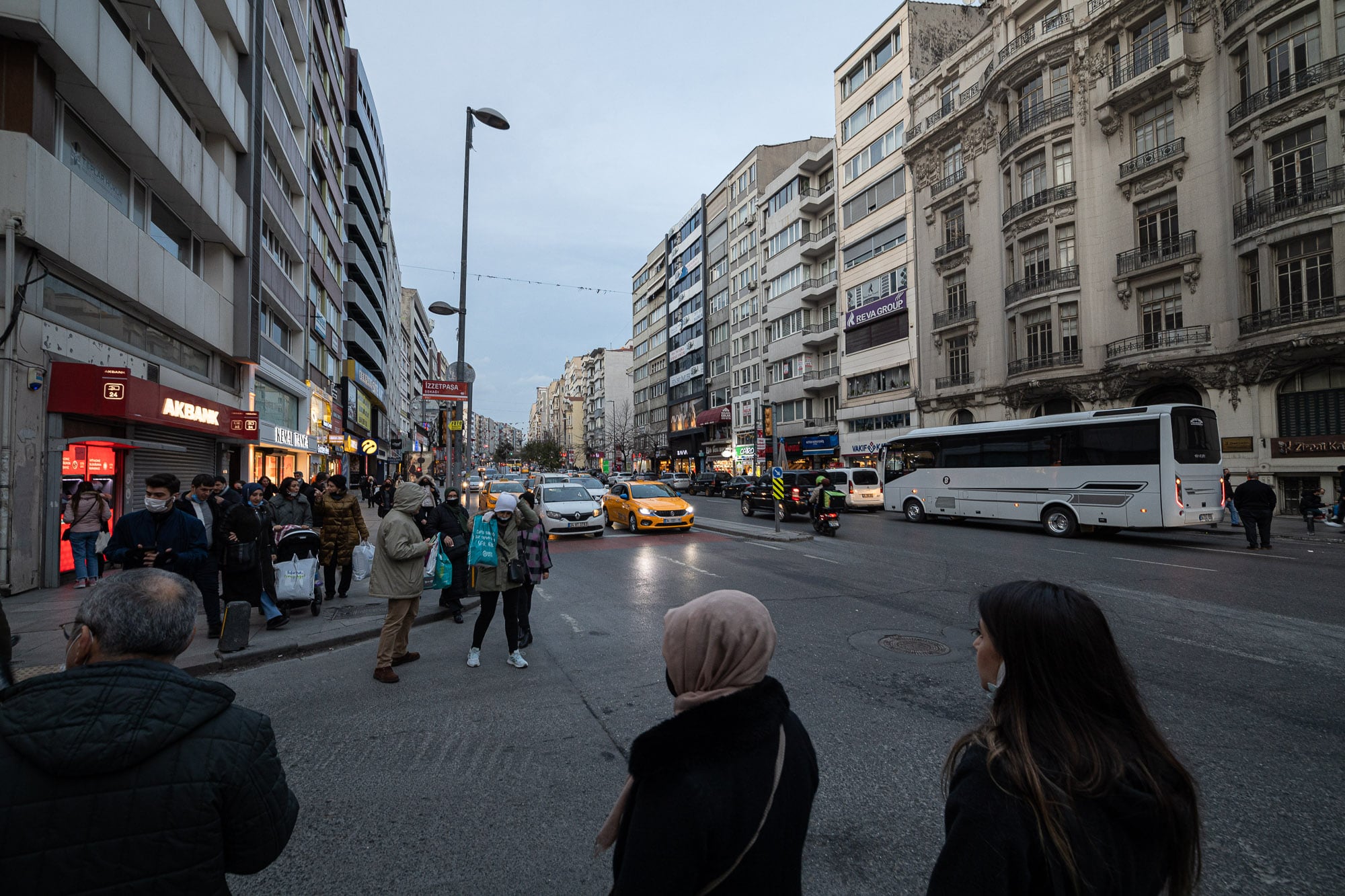 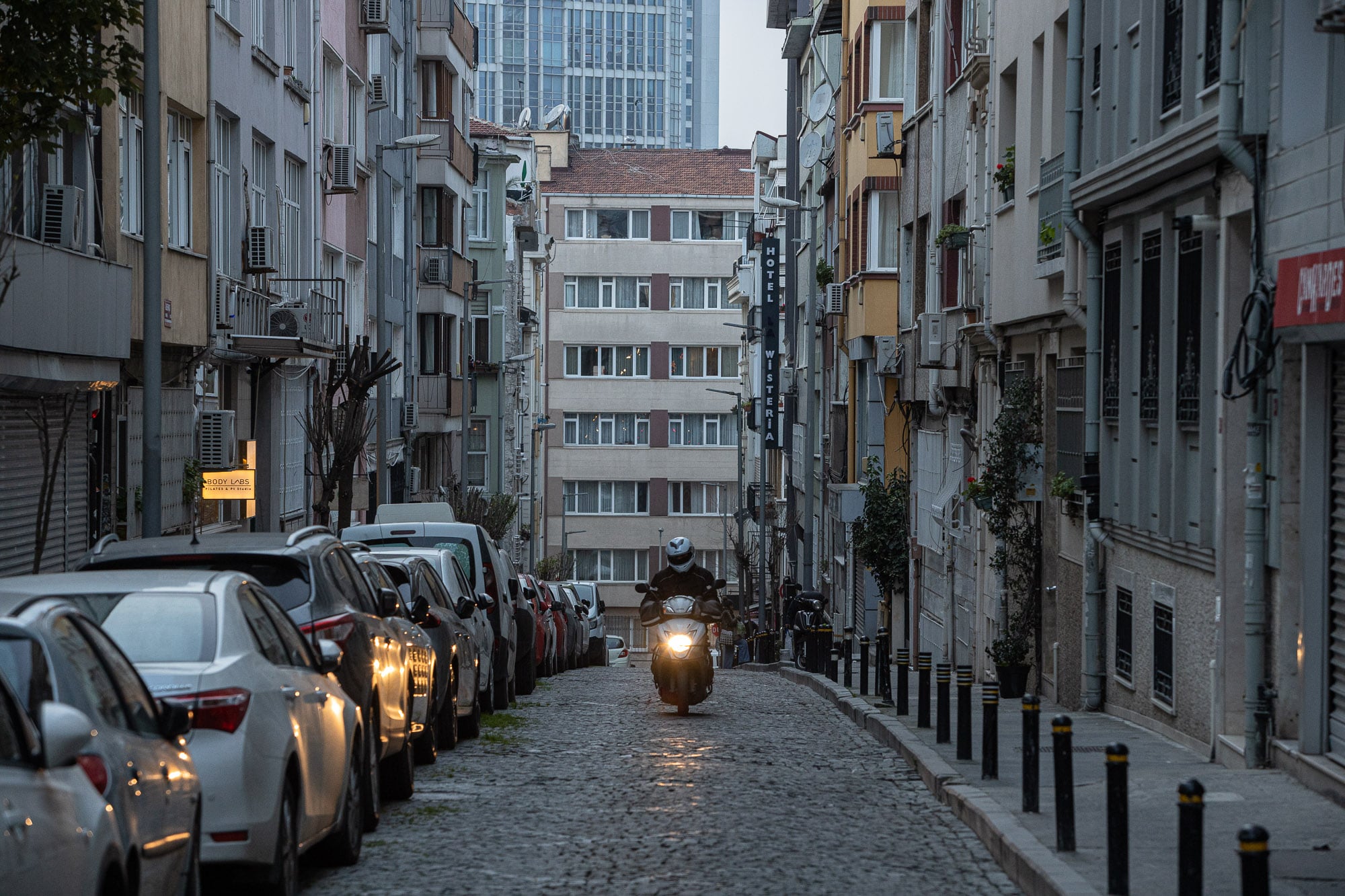 With the Caboose in storage on the European side, I took a car back over the Bosphorus Bridge to my friend, the Kantian: 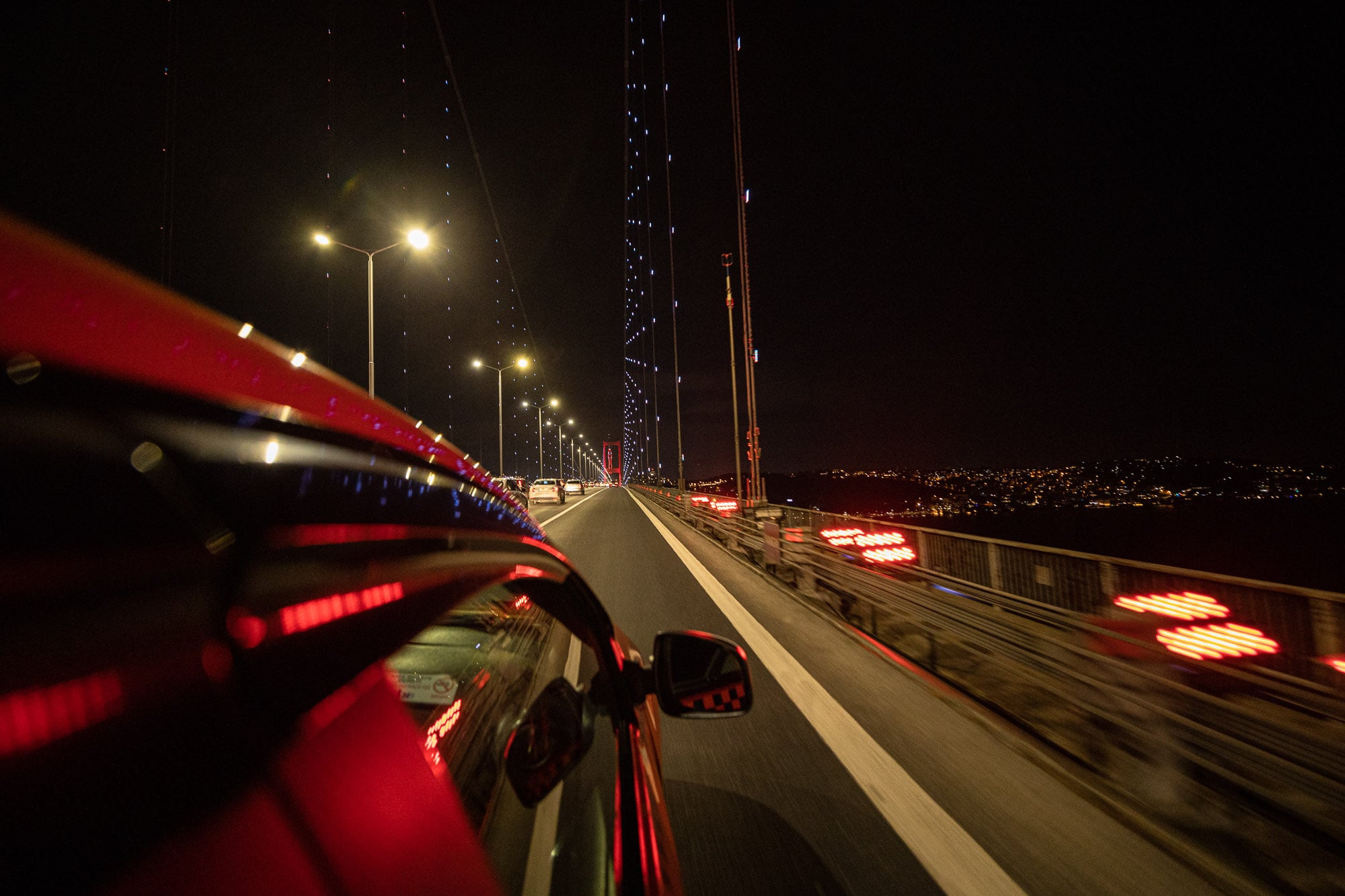 Day 500
from Istanbul to Istanbul