The weather was mild, and Shamakhi was green: 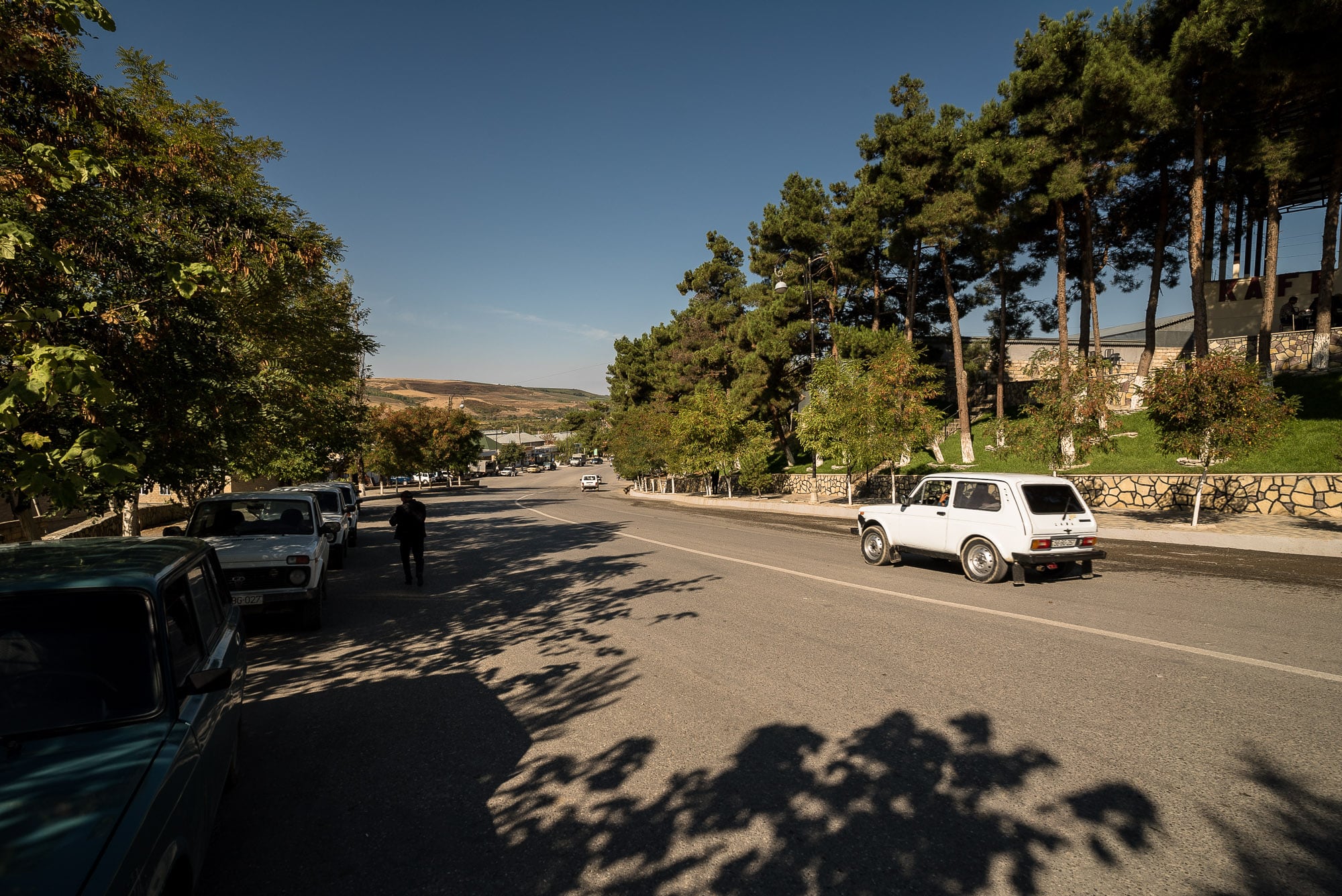 And as long as the road was flat, walking almost felt easy: 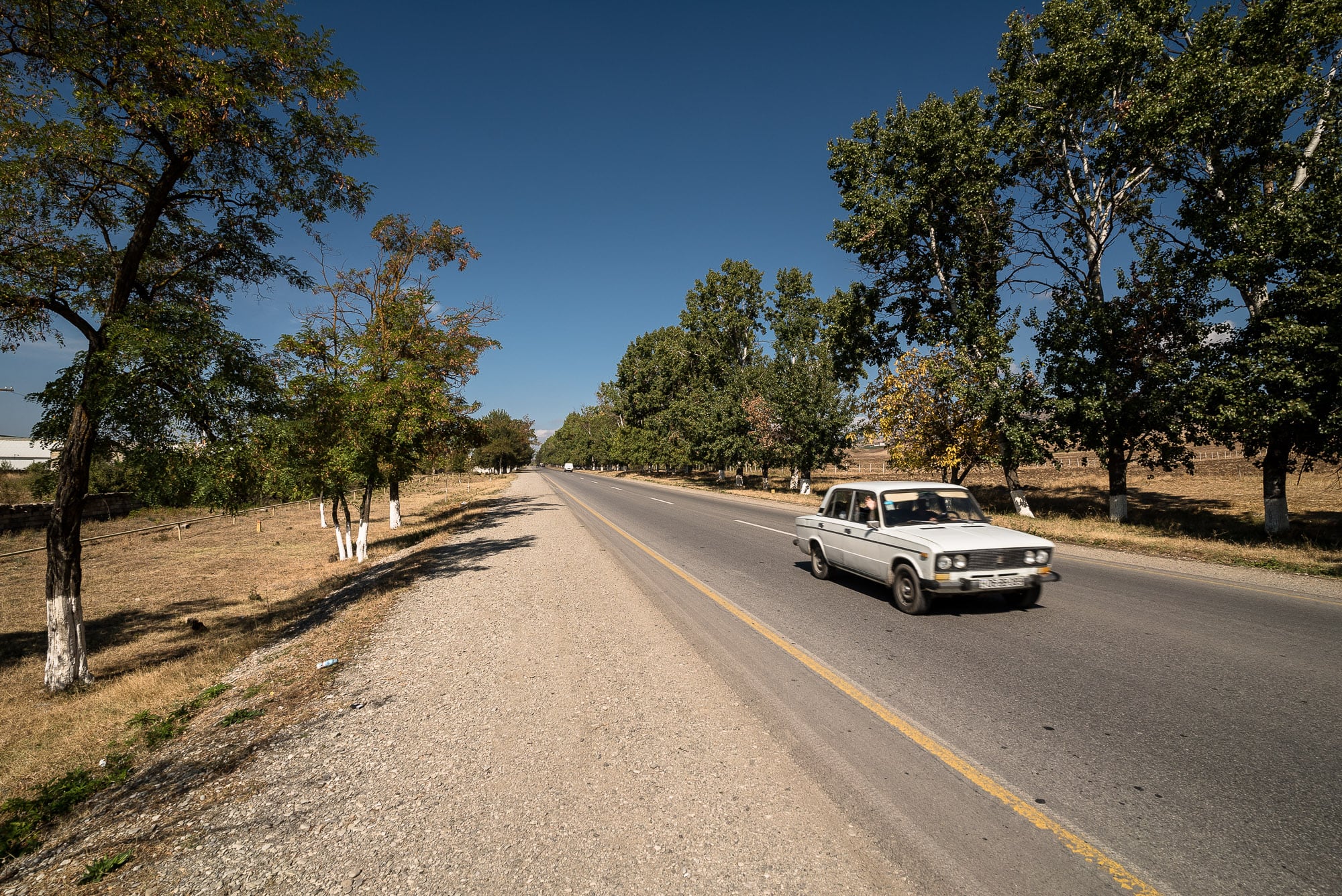 But I was worried. Today was the day that I would have to decide: take the easy way south out of the mountains and into the flat land towards the city of Ganja (and then to Tblisi), or take a difficult mountain pass and stay on road that went west along the mountains (and which would also lead to Tblisi)? It was like a video game – at the beginning lay the question of easy mode or hard mode.

The road started winding up: 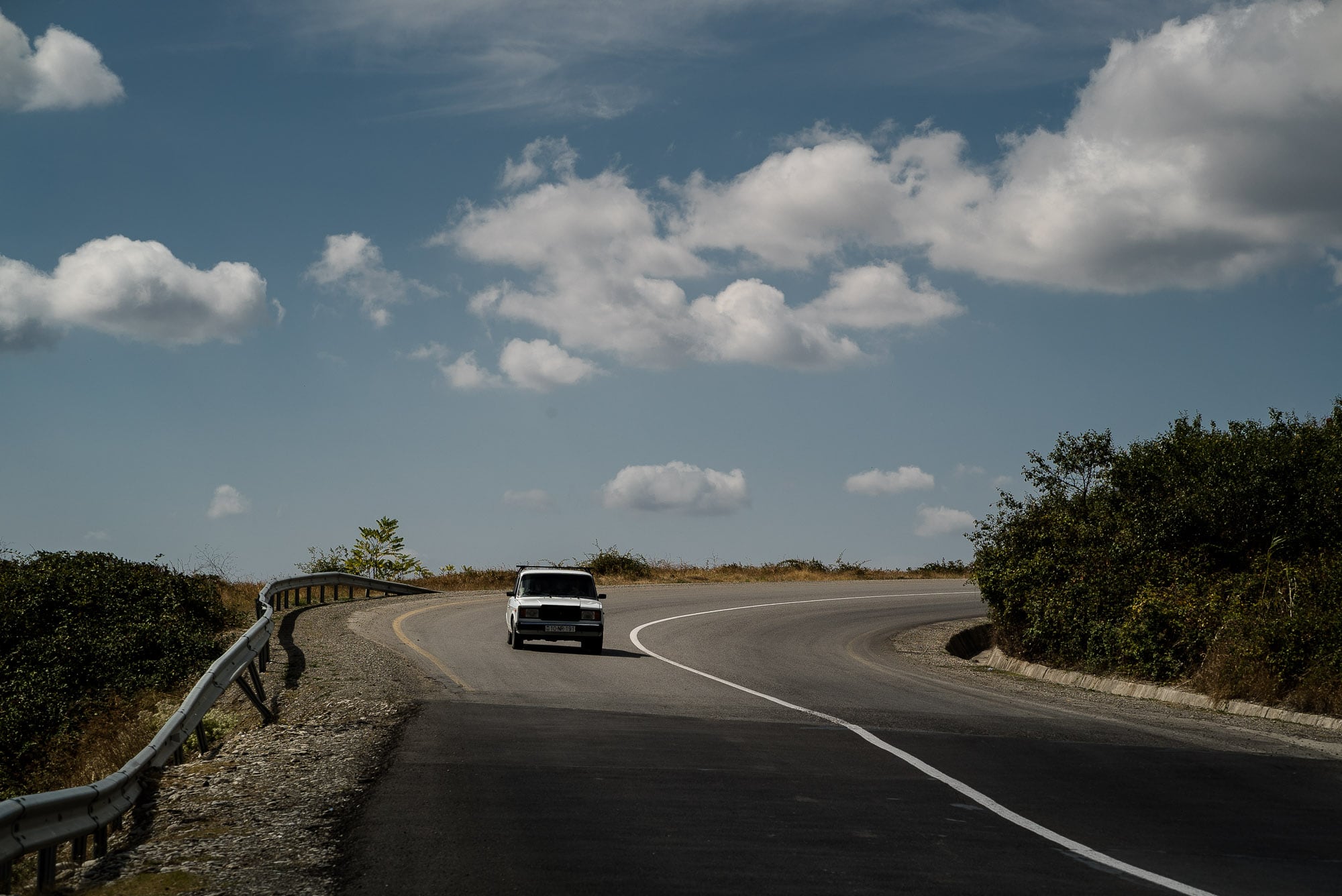 I sat down in this place and ate some hard boiled eggs and a bit of bread that I had gotten from the breakfast buffet in the hotel. A gentleman walked by, saying good morning, and for a moment it felt like I was on a regular stroll in the sun: 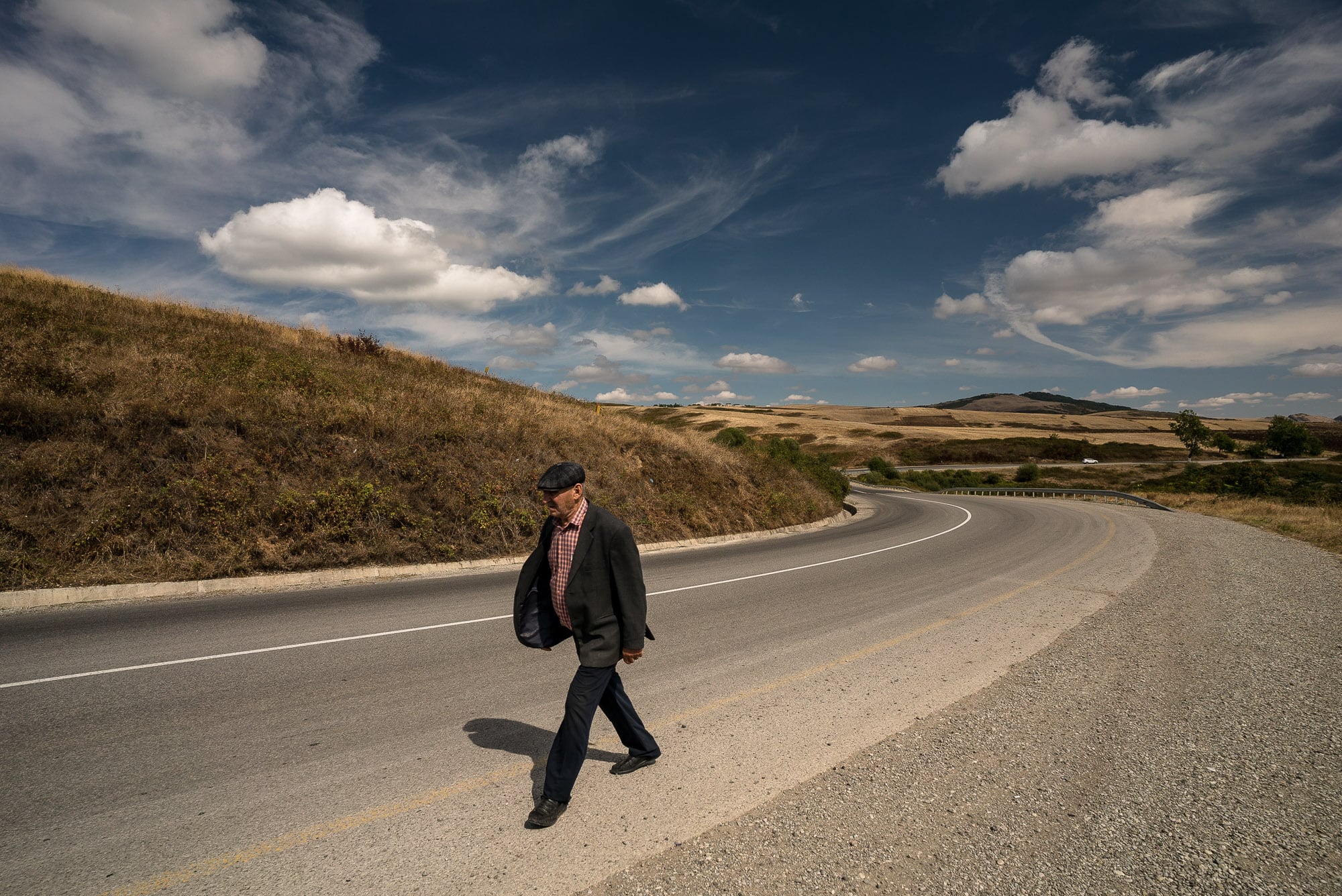 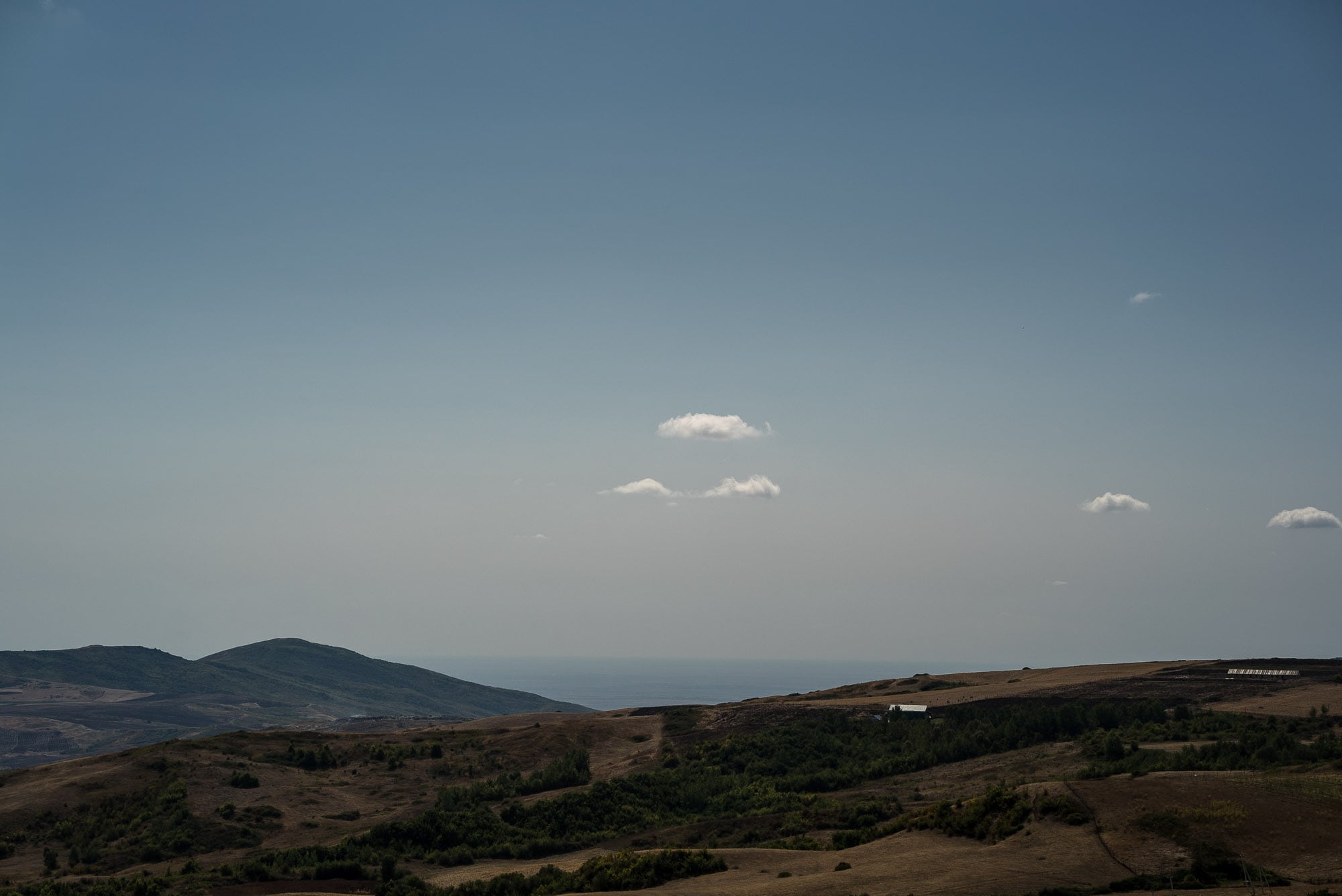 And then I got to the place where I had to make my decision – to either go left and take the easy way, or to go right and take the hard way: 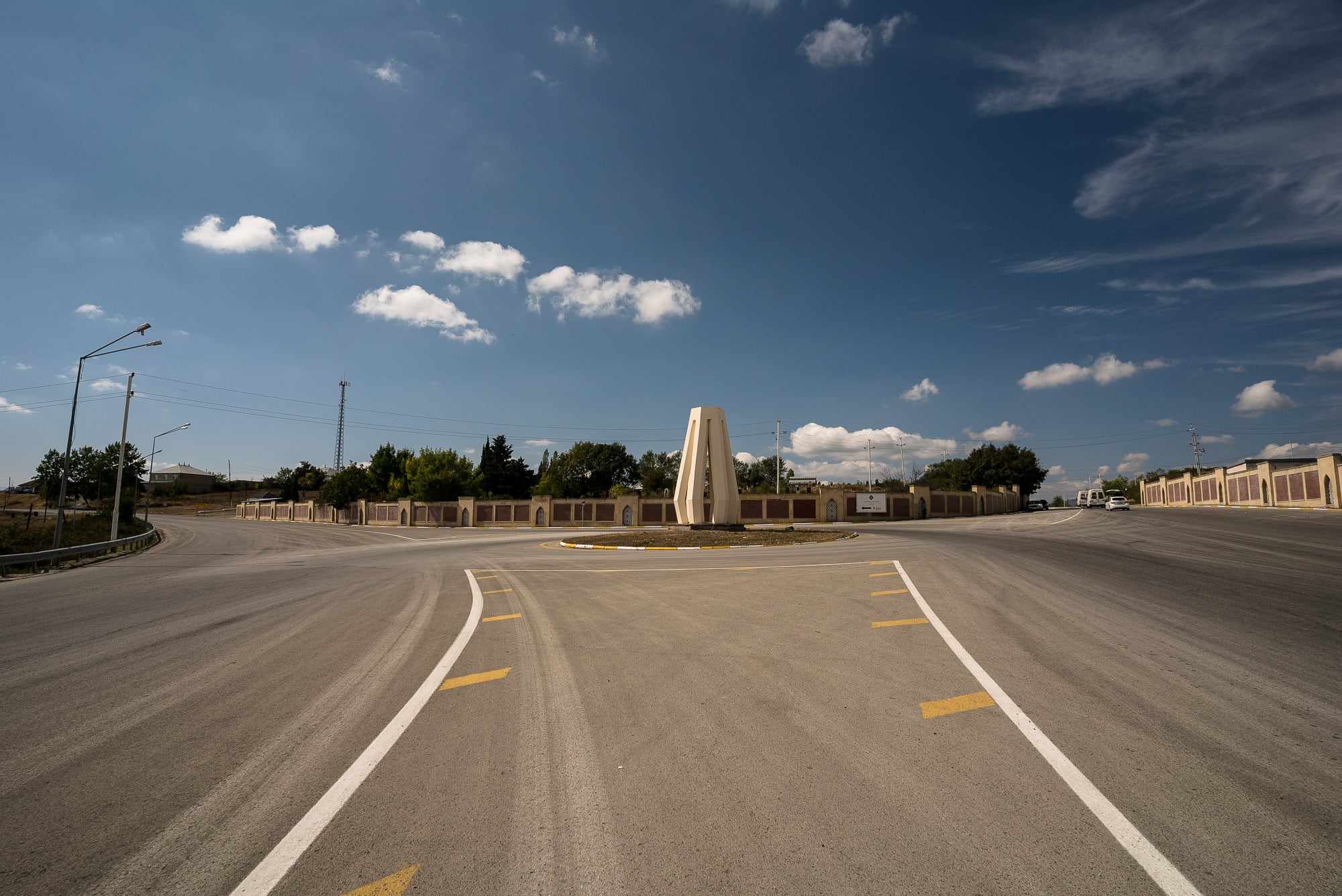 There had been a conflict about this question raging within me over the last few days. Sometimes I had felt sure that I was going to go left. And sometimes it had been the other way around.

I made my decision, and I walked.

I had not gotten very far when these two Russian gentlemen stopped their car to say hello: 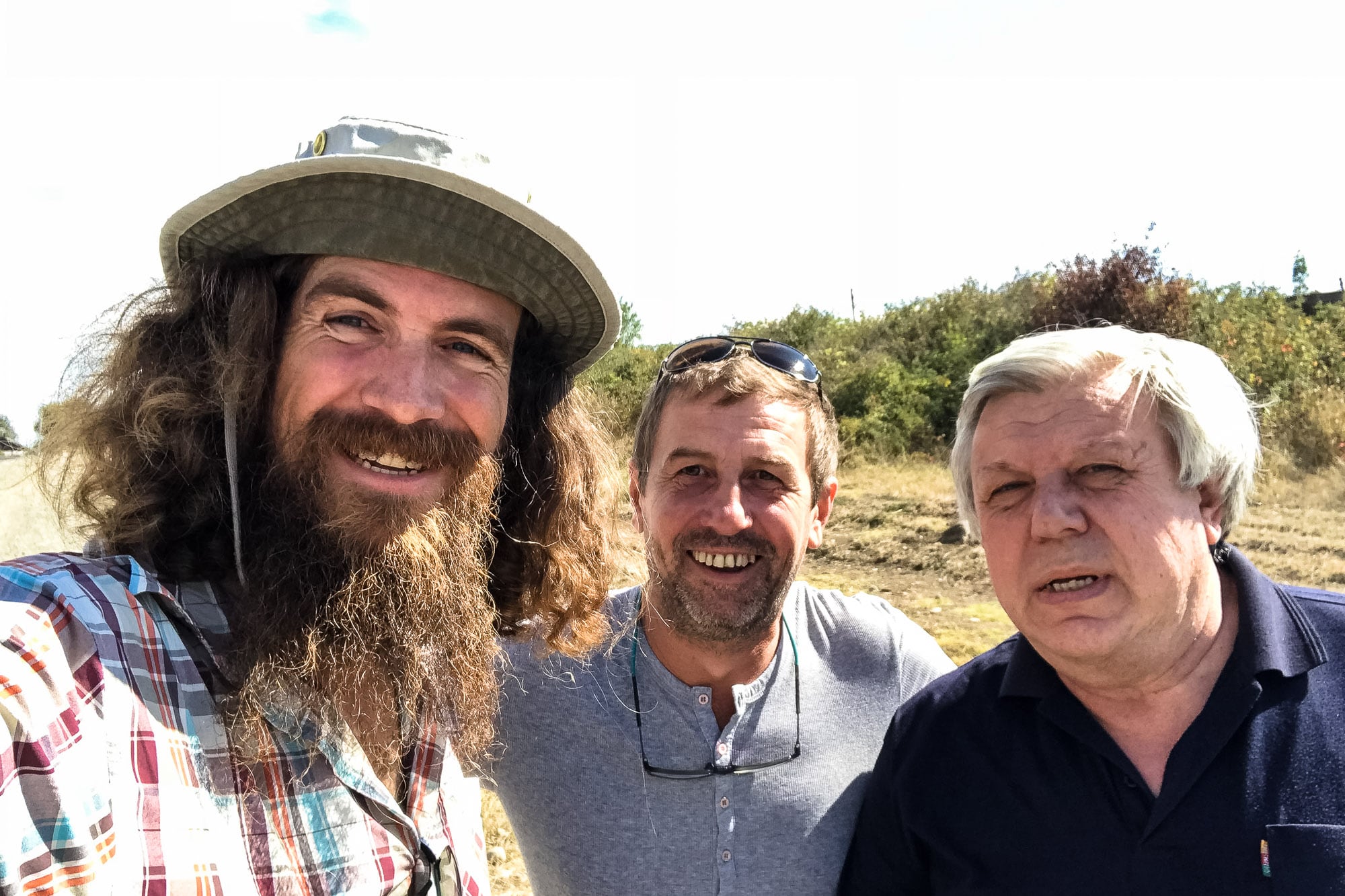 I had met one of them a few days earlier on the road. “Why are you going in this direction?” he wanted to know. “It will be so difficult!”

I didn’t know what to say. I had picked hard mode.

Then a group of young men also stopped their car to take some pictures: 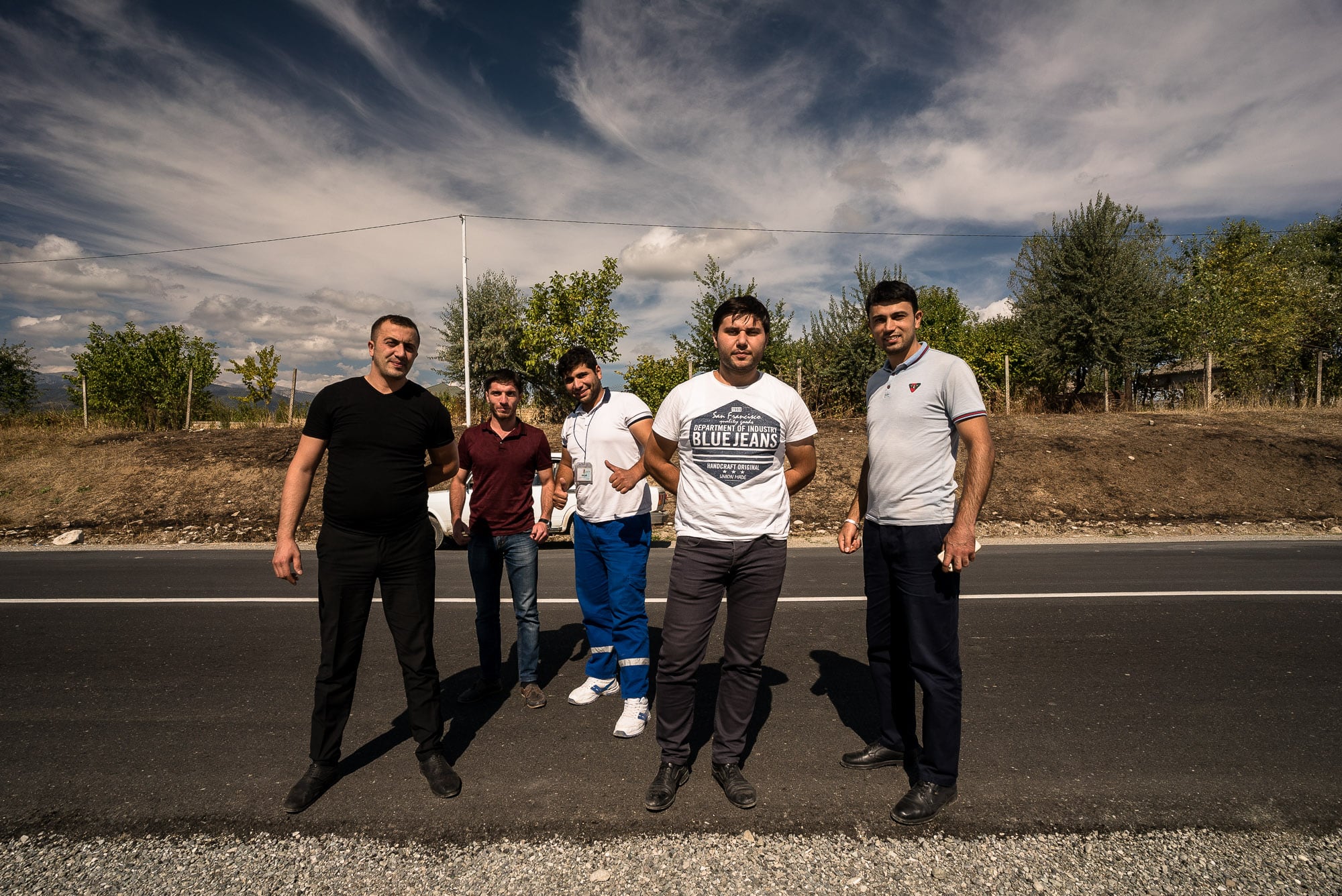 And then yet another gentleman stopped and handed me a bunch of grapes: 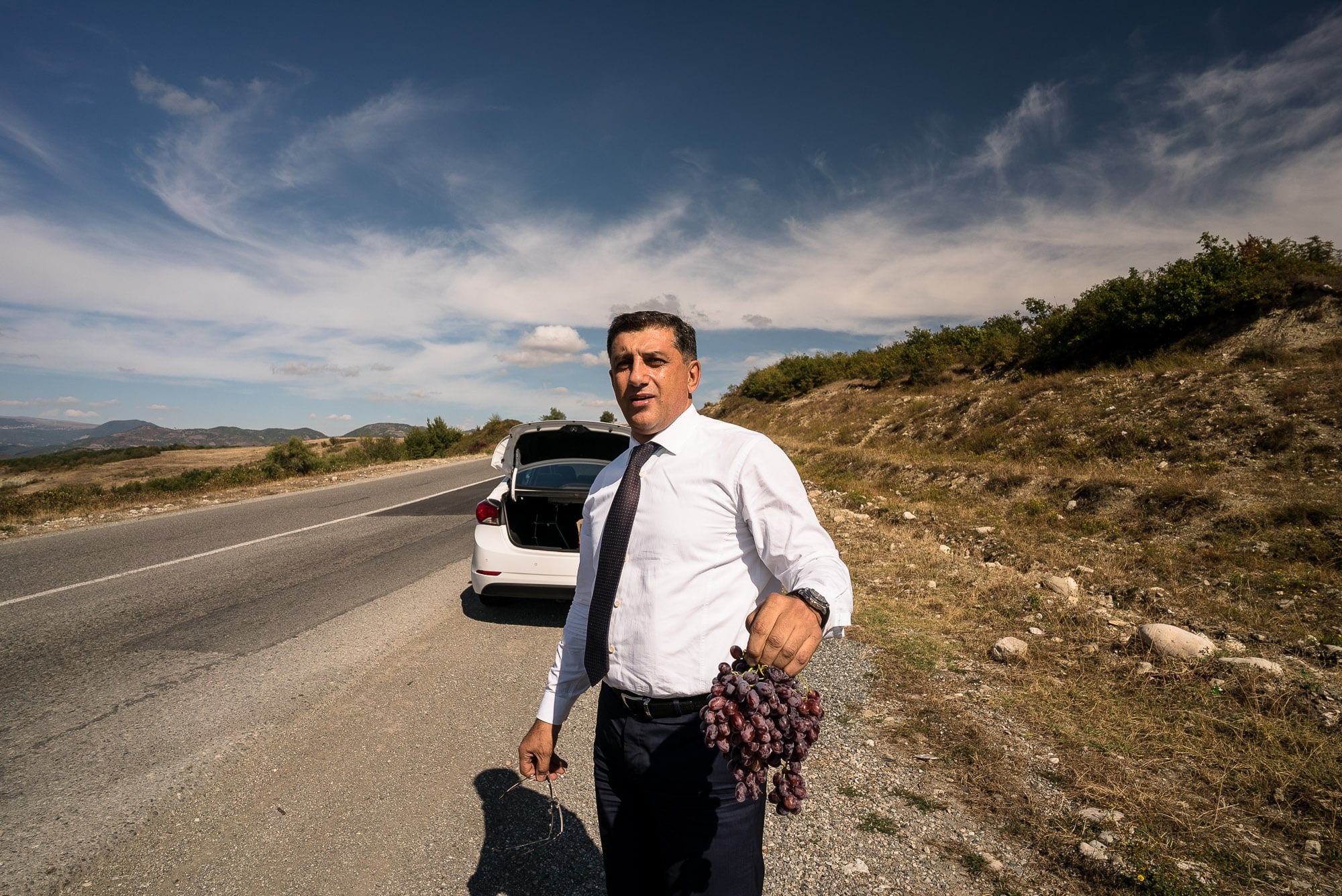 It was then that I got an overview of the mountain pass for the first time: 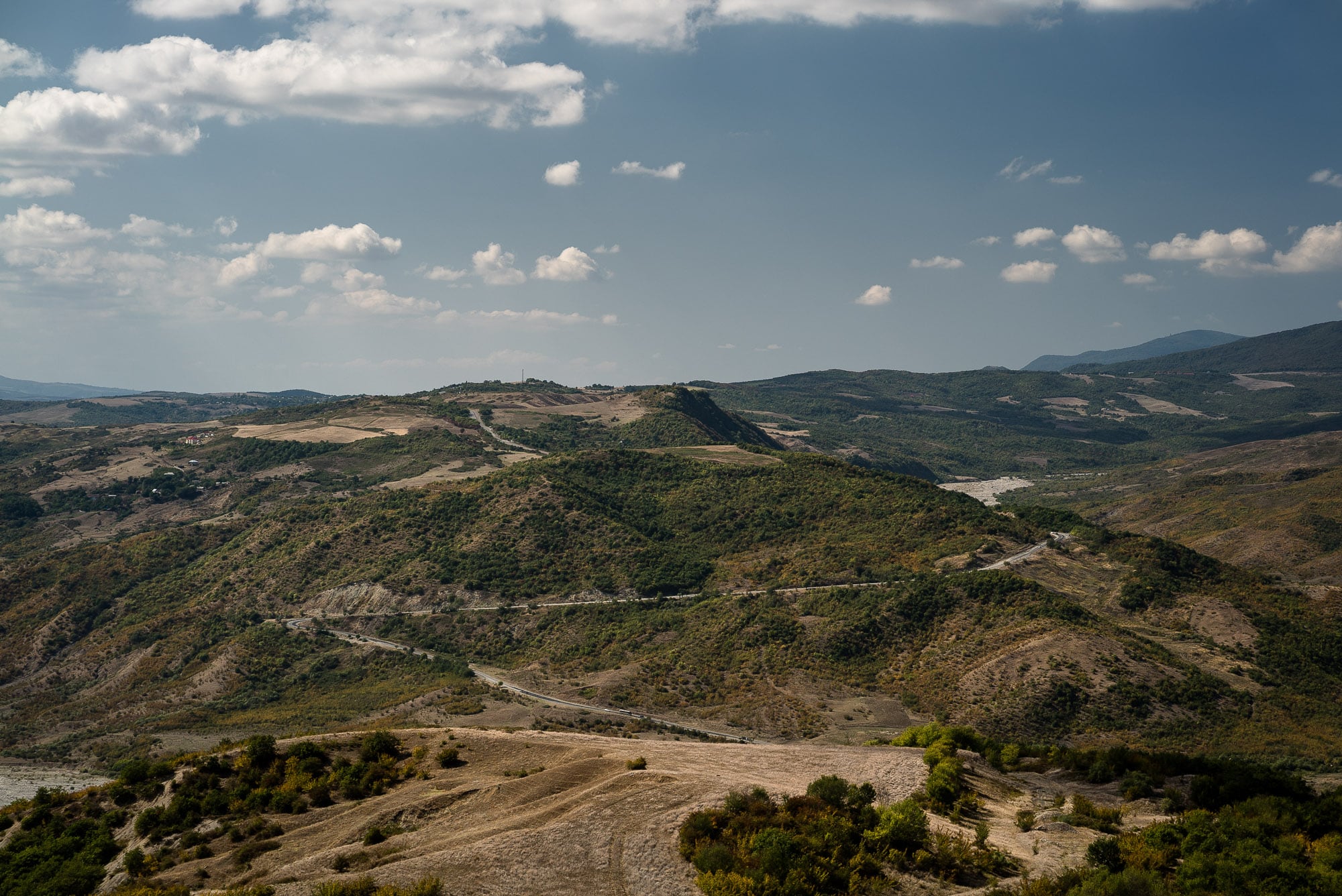 I lay down on the ground and just breathed for quite a long time: 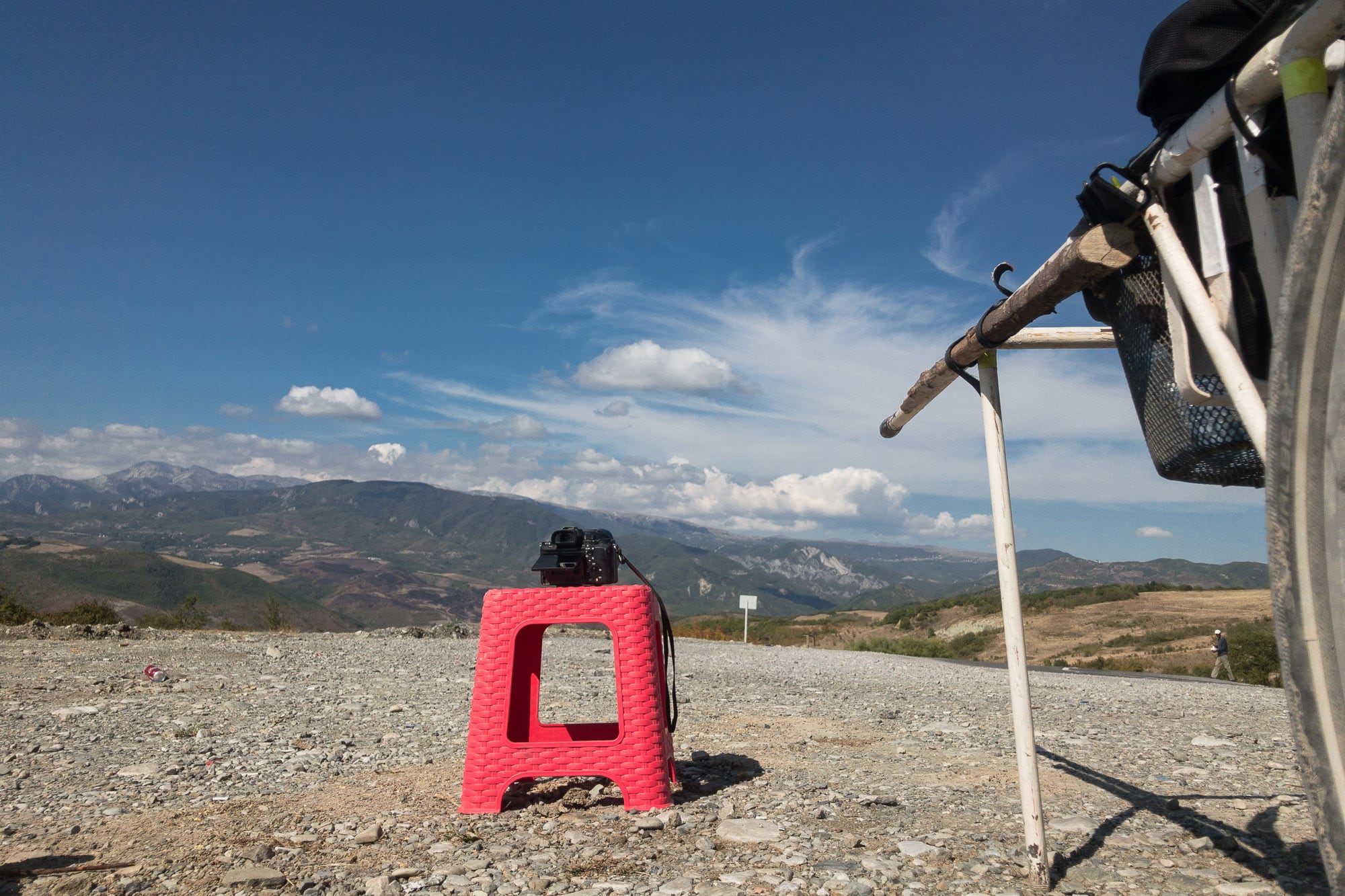 Then I went down the pass: 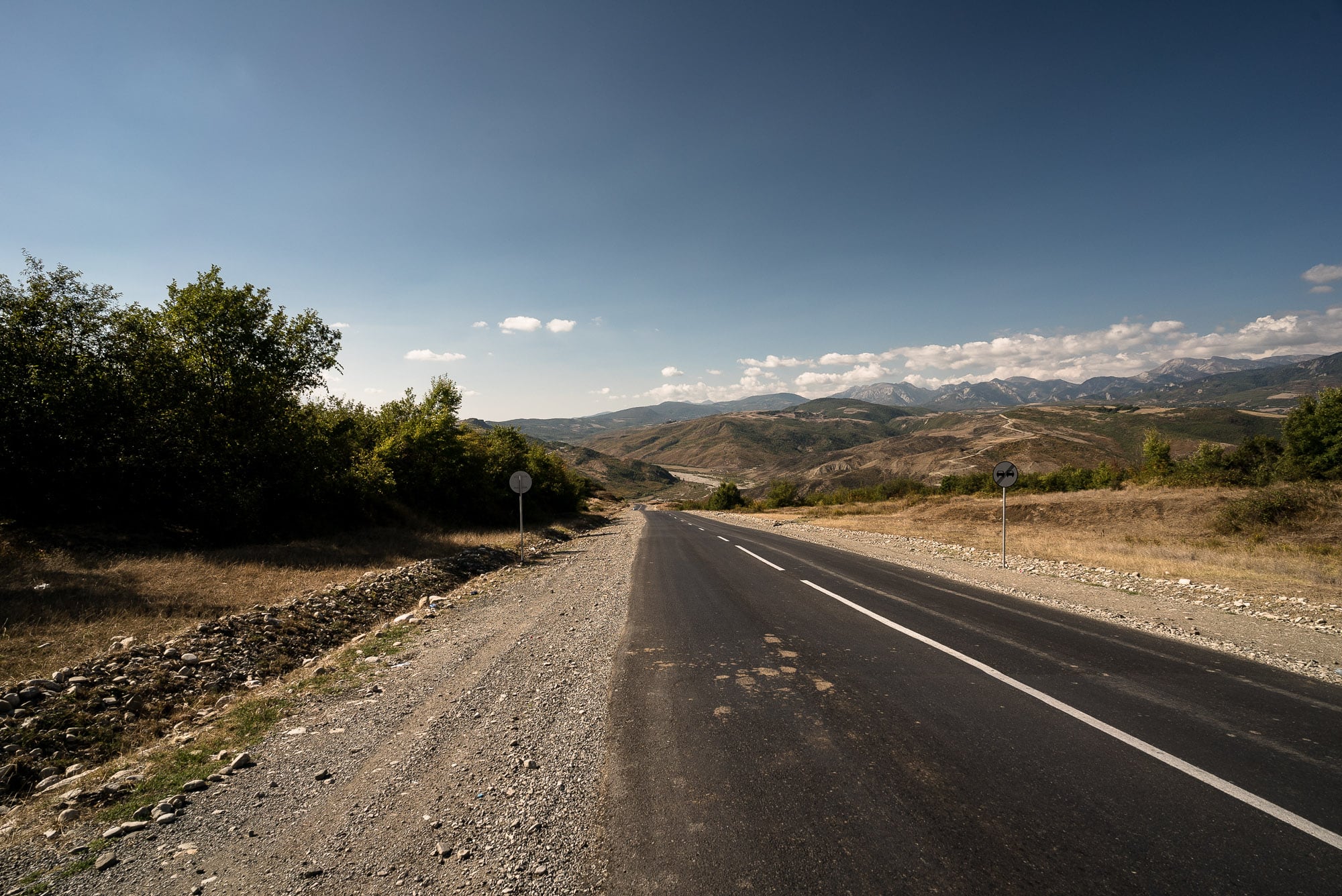 I had asked the folks from the bike shop in Baku if they could install a braking system, but they had said no. So I was left to do what I always did – brake with my body weight, leaning against the Caboose with my ass, making tiny little steps. 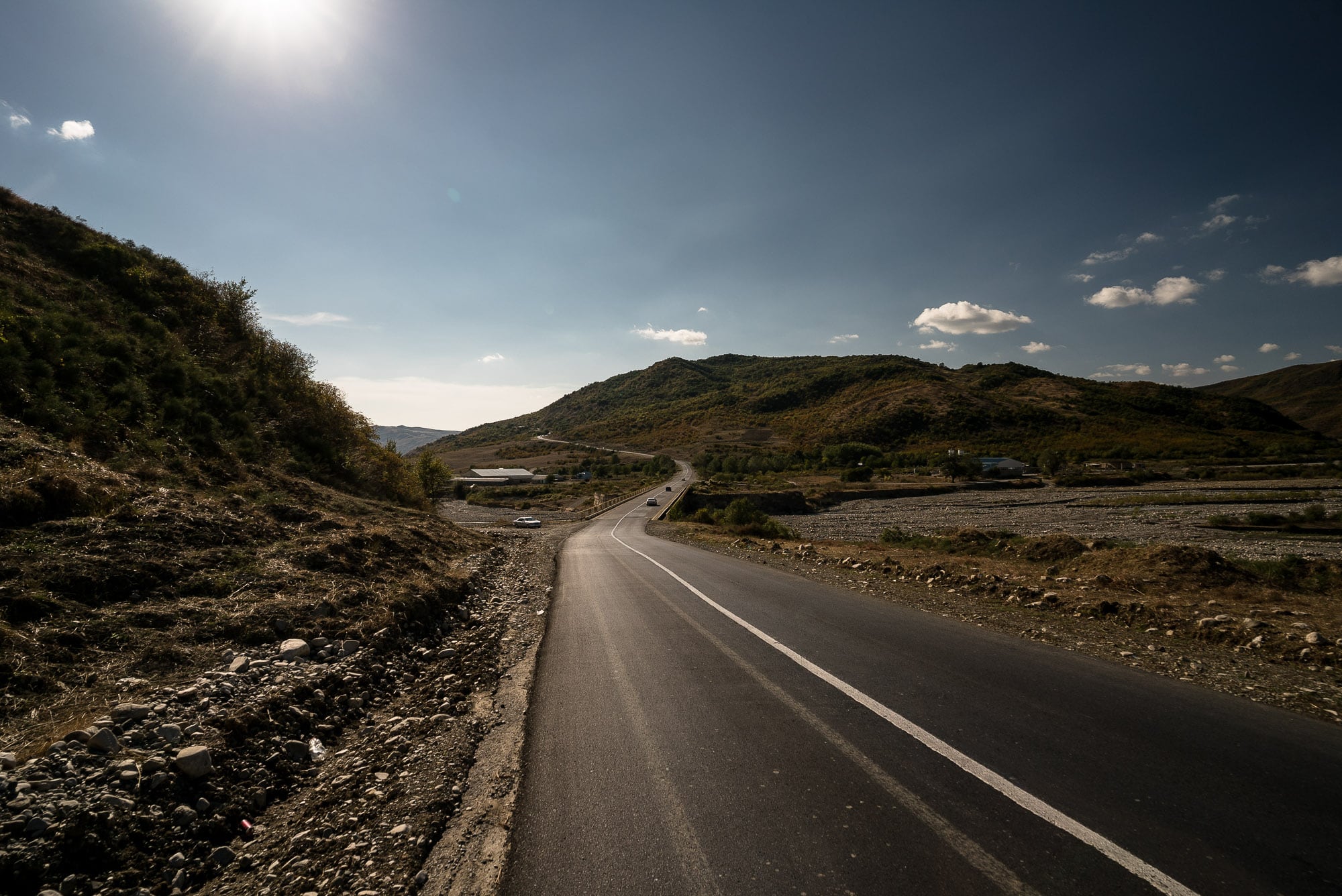 When we arrived at the lowest point of the pass, I sat down and rested for a long time: 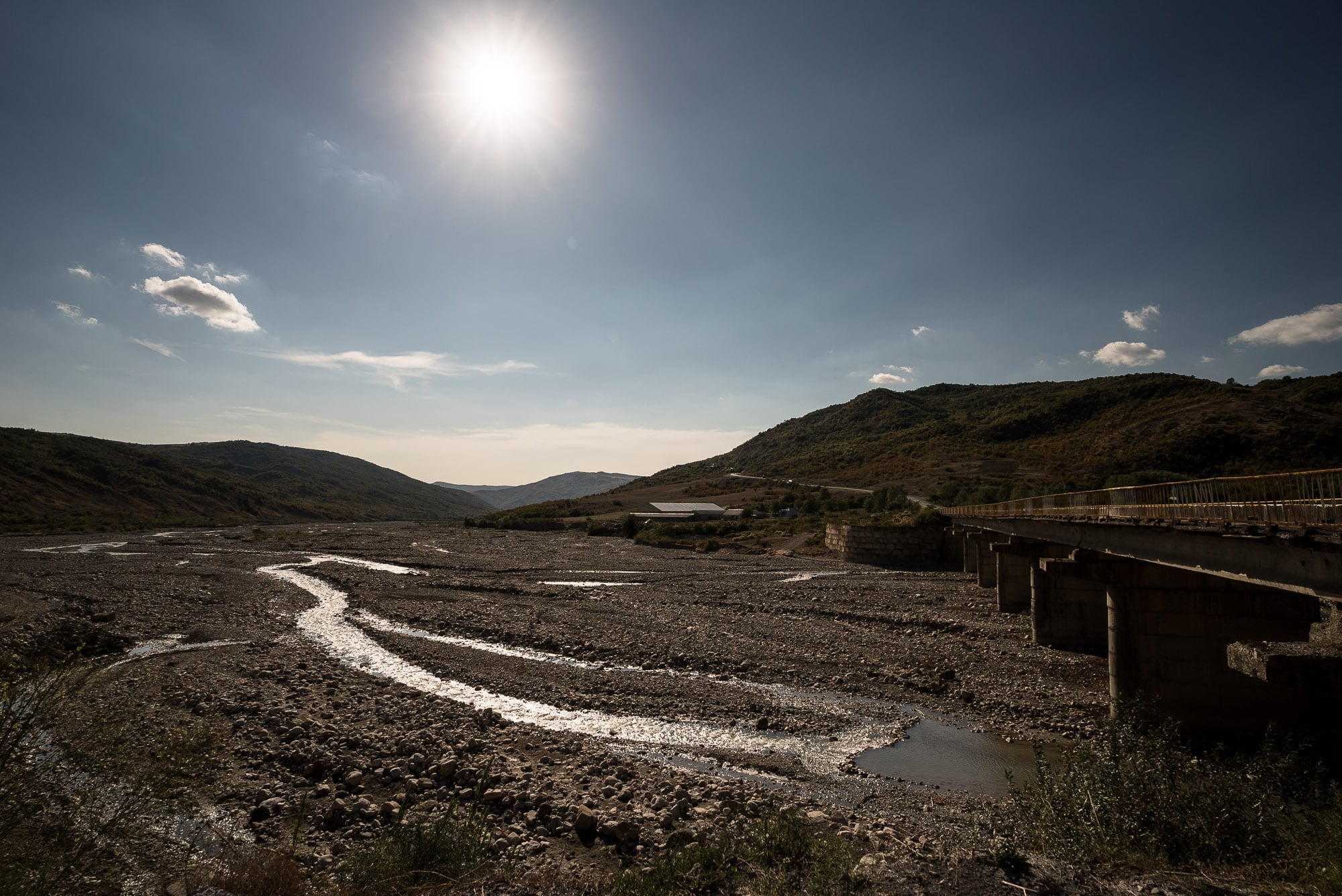 Then I got started on the uphill climb, which felt even more difficult than the downhill, probably because I was already tired.

I climbed and I climbed, and then, after a few hours, I passed this roadside restaurant that looked nice: 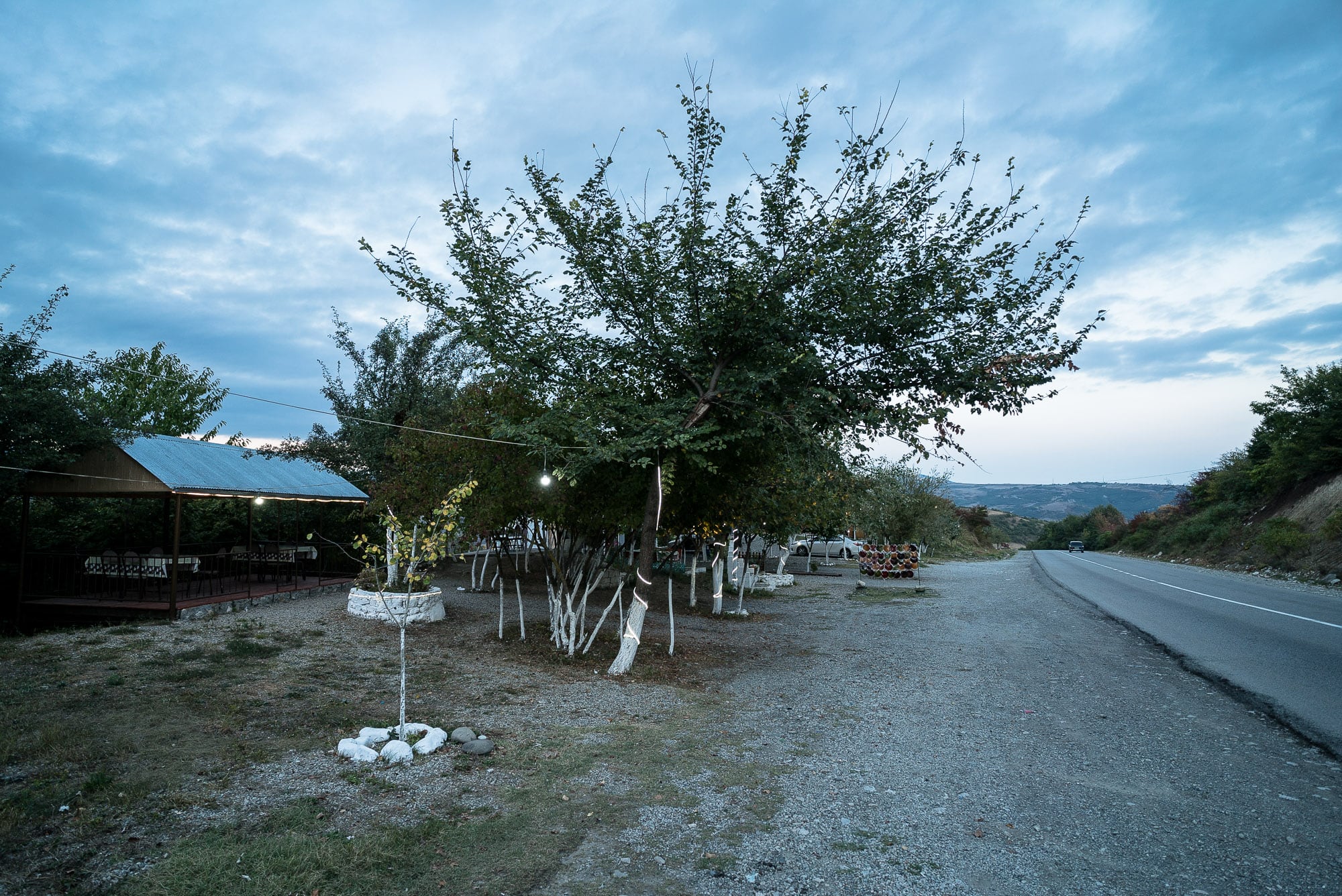 A group of gentlemen invited me to tea, and they gave me some important information about the way ahead: 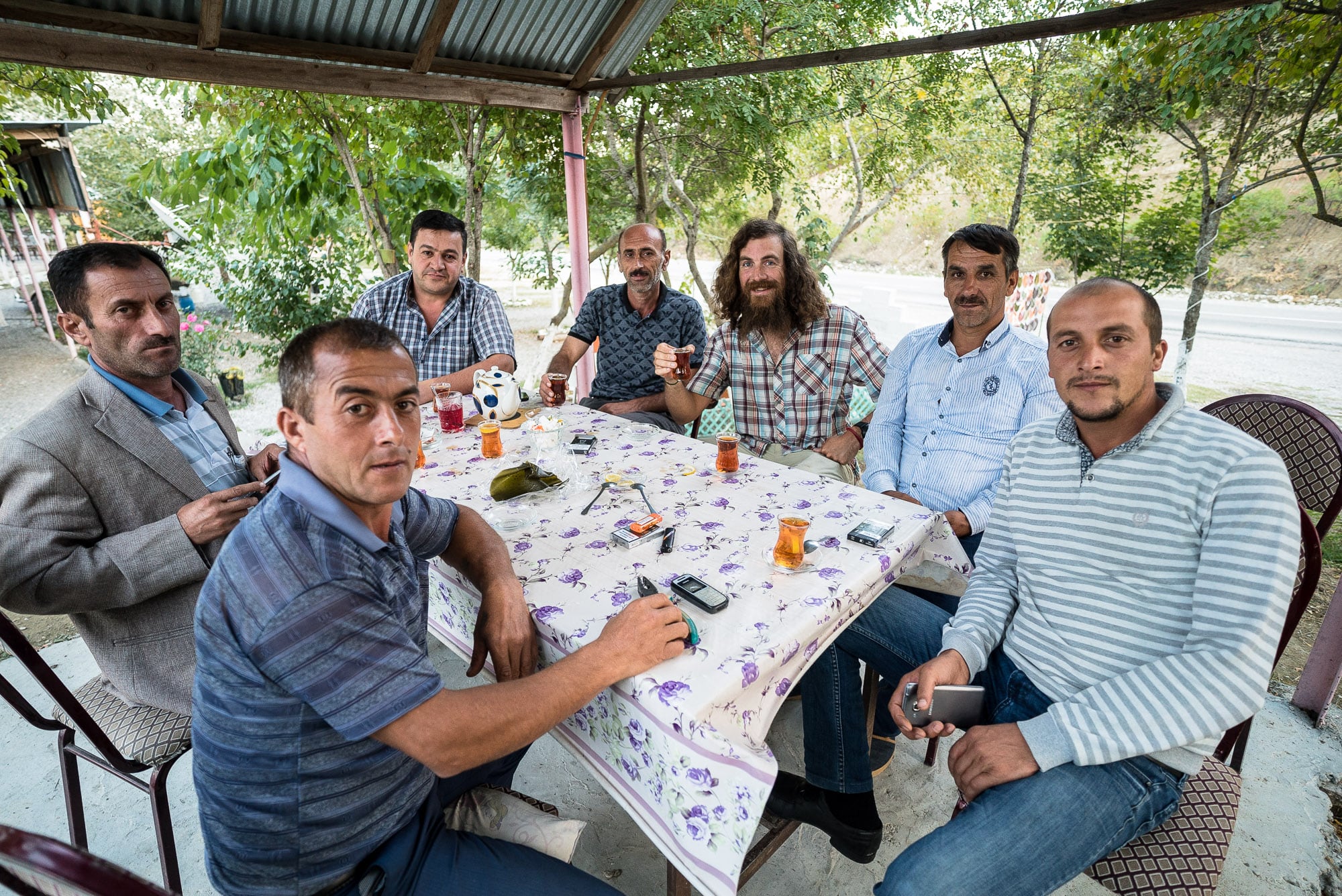 “There will be a restaurant in about three kilometers, and you will be able to sleep there”, they told me. It was called “Kafe Piknik”, they added.

And so I got back on my way.

I passed a honey vendor who told me that Kafe Piknik was actually about five kilometers away: 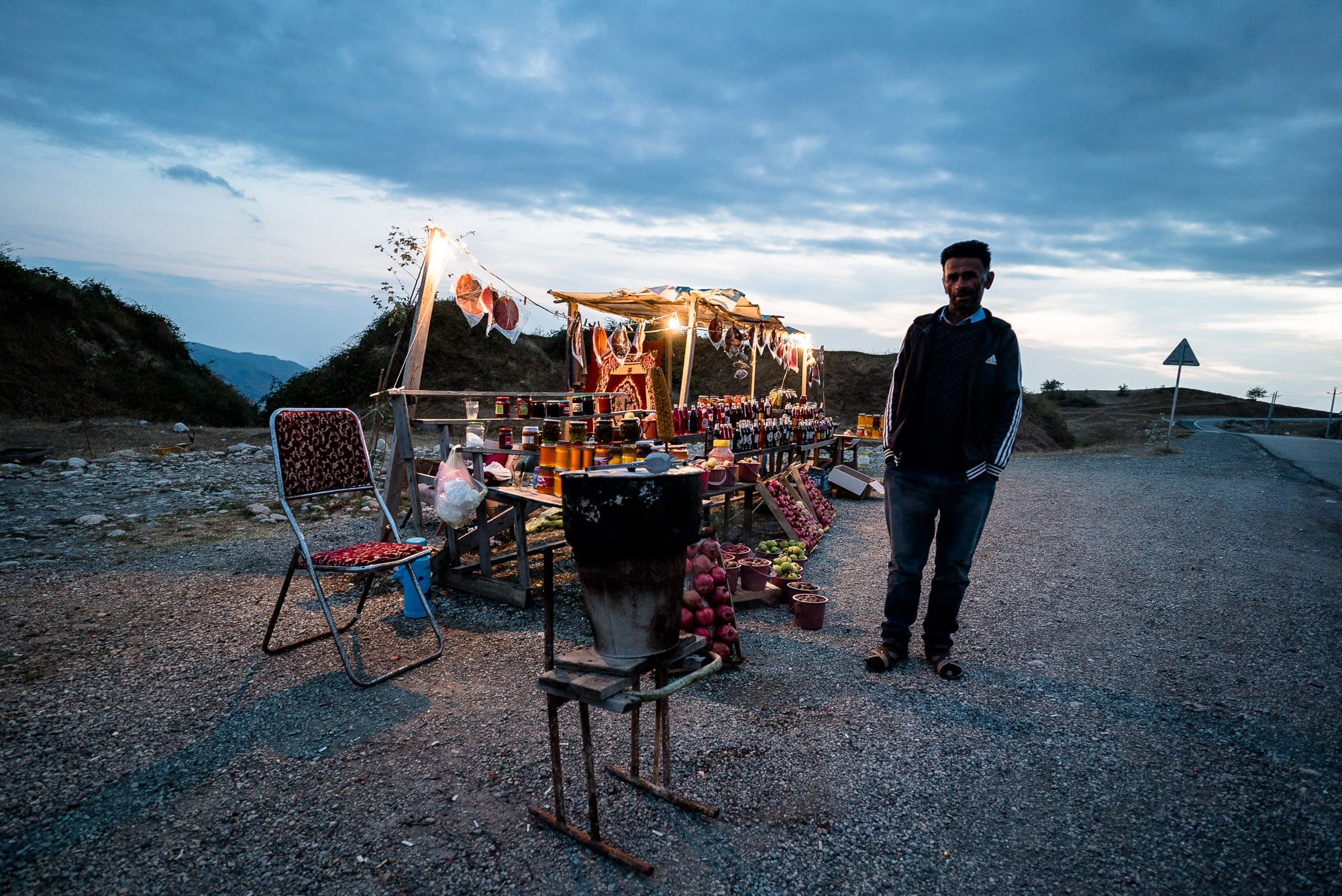 I looked over the mountains and saw a huge shiny building which I identified as a hotel that I had seen on the map: 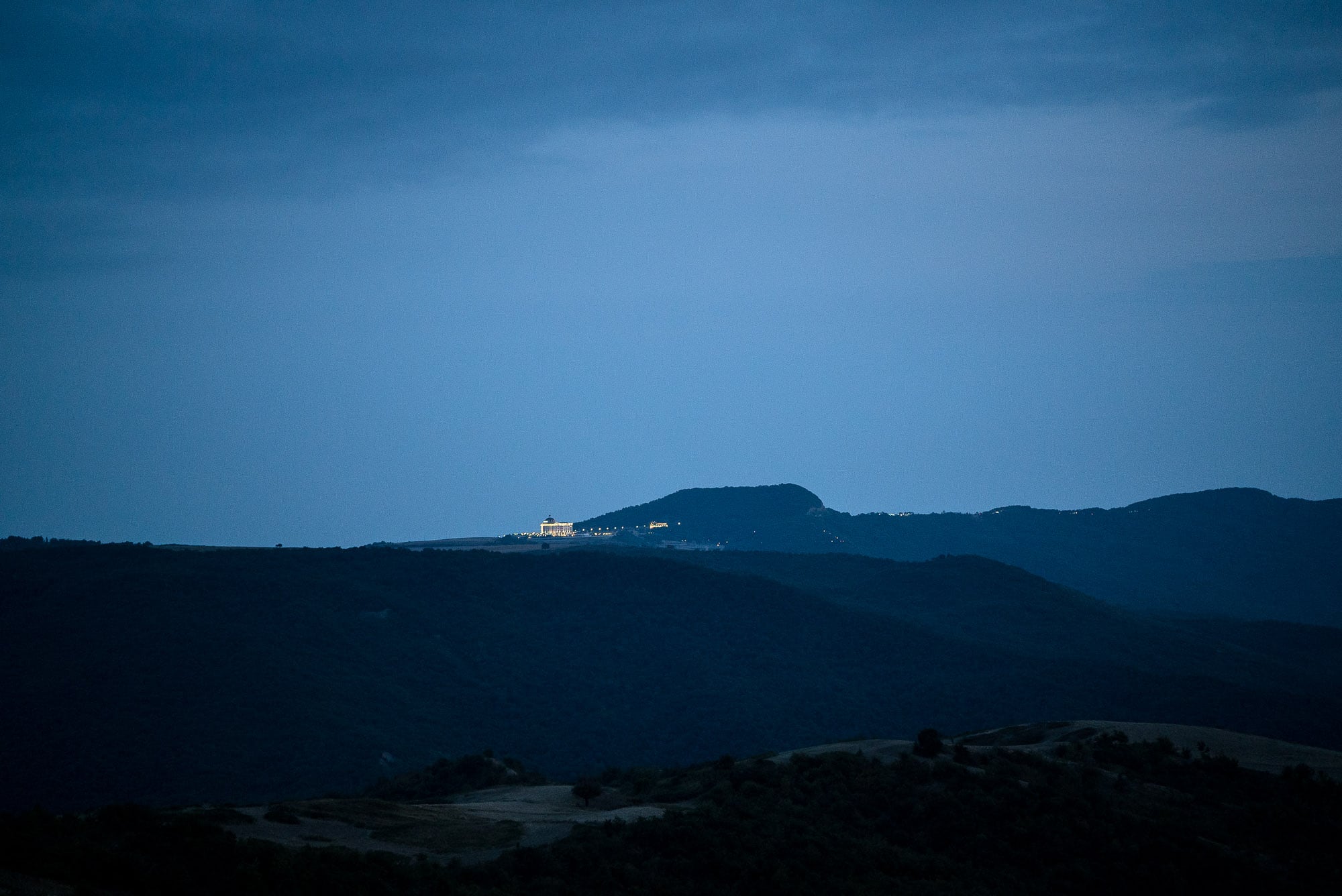 I listened to the jackals howl. Three kilometers or five, what was the difference?

Another honey vendor called Jalal gave me some apples and told me that Kafe Piknik was indeed not three, not five, but ten kilometers from here: 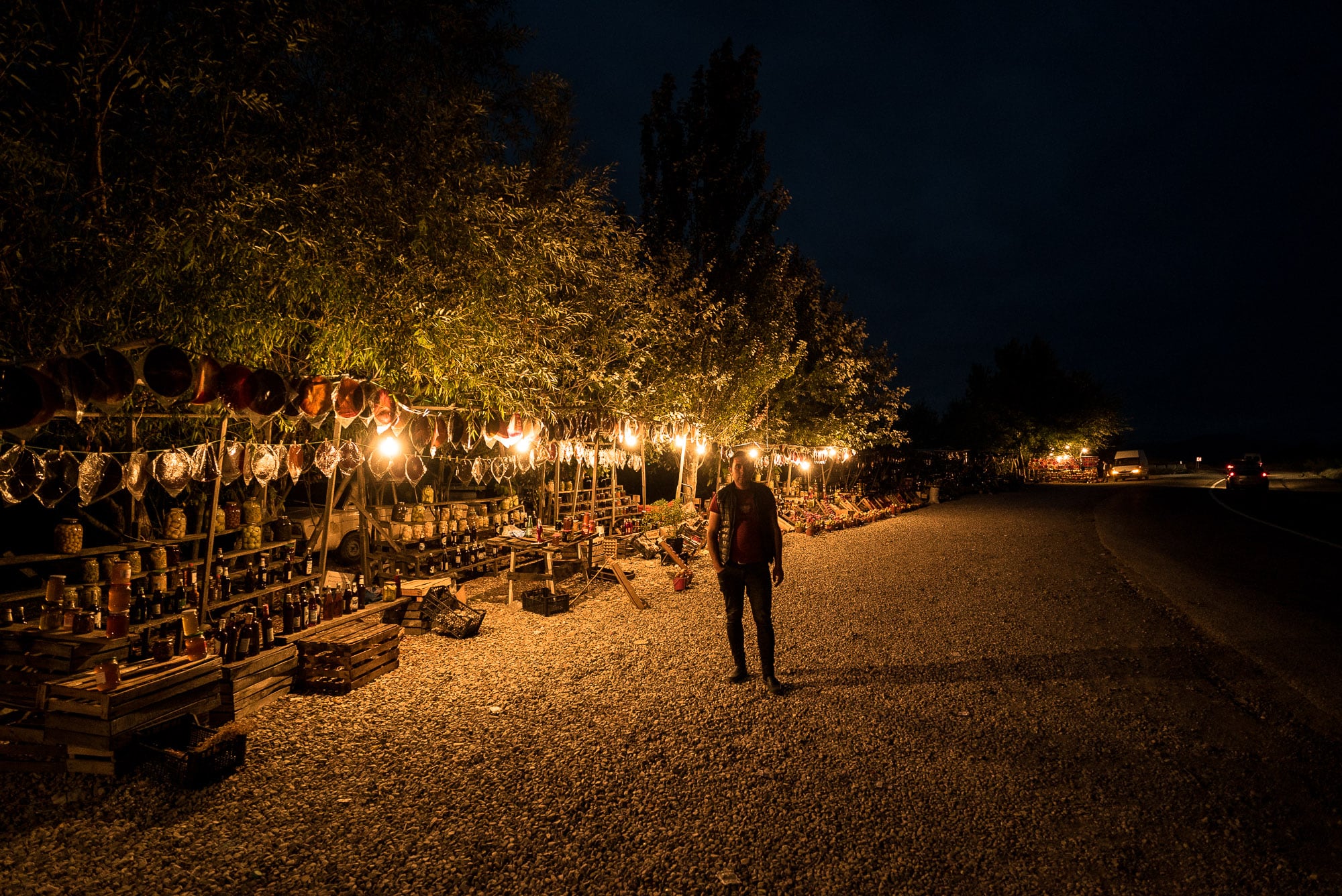 What’s the difference, I thought. My whole body hurt anyway.

I passed a few more honey vendors who each told me a different distance to Kafe Piknik. One time I ran into two feisty bunnies that were hopping around outside in front of this restaurant: 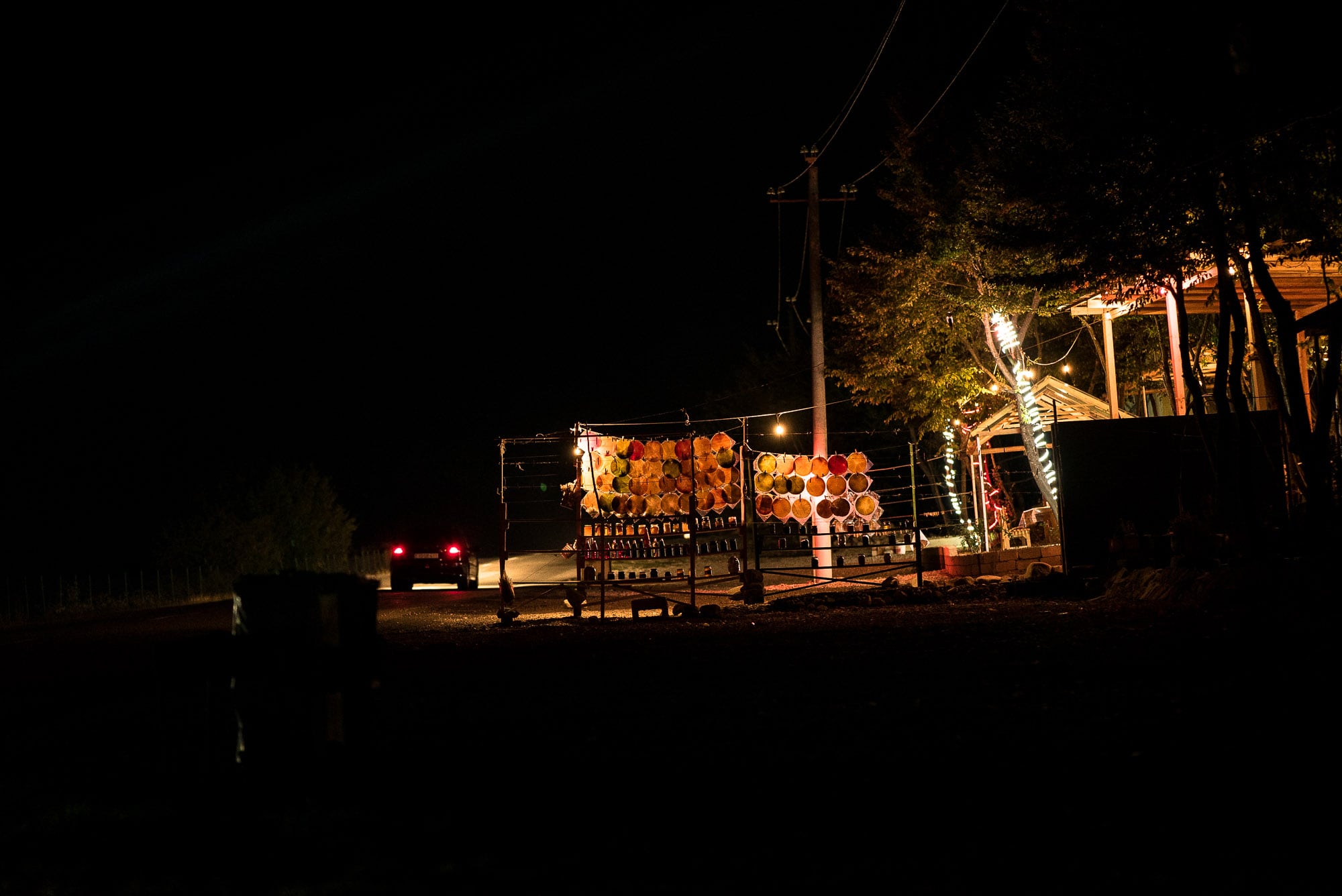 And eventually, finally, in the darkness, when I felt like a shadow of myself, I reached Kafe Piknik.

Here’s an altitude chart of the day: 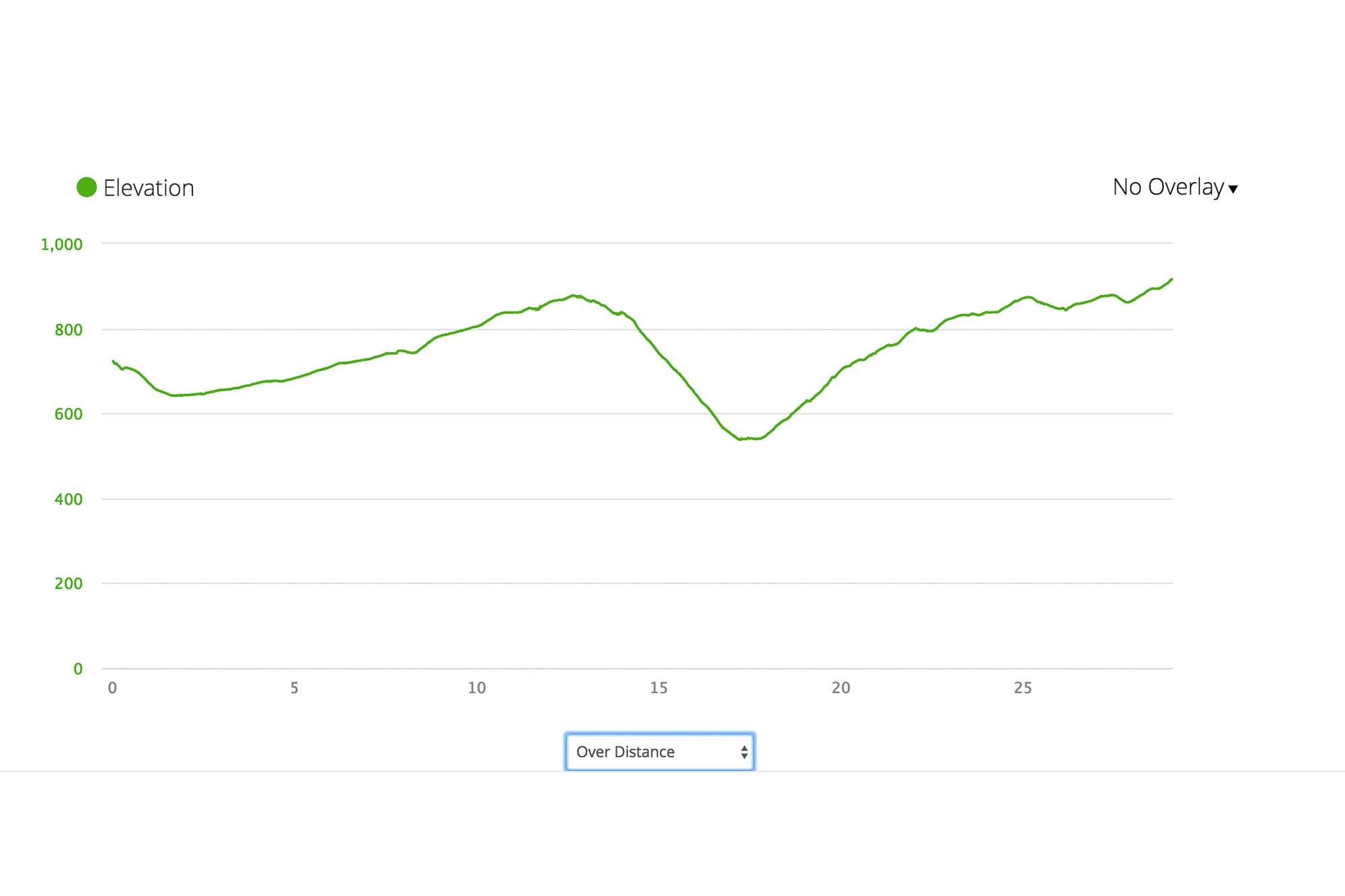 I had picked hard mode.

Day 1240
from Shamakhi to Bizlan