The ramp from the new highway to the old highway was closed: 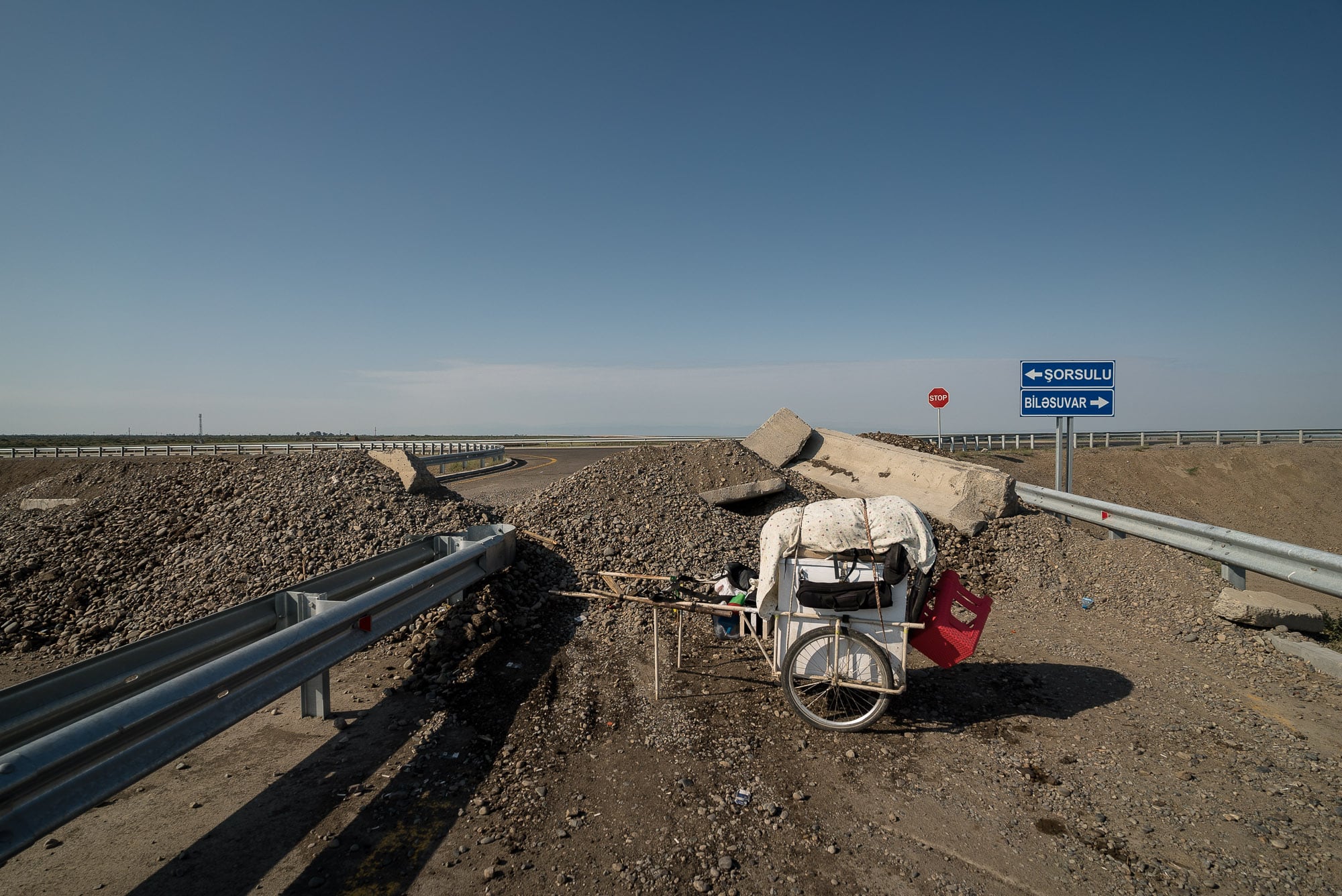 Of course, I thought, of fucking course.

I didn’t feel like dismantling the Caboose again, so I started looking for a hole in the fence. And there was one: 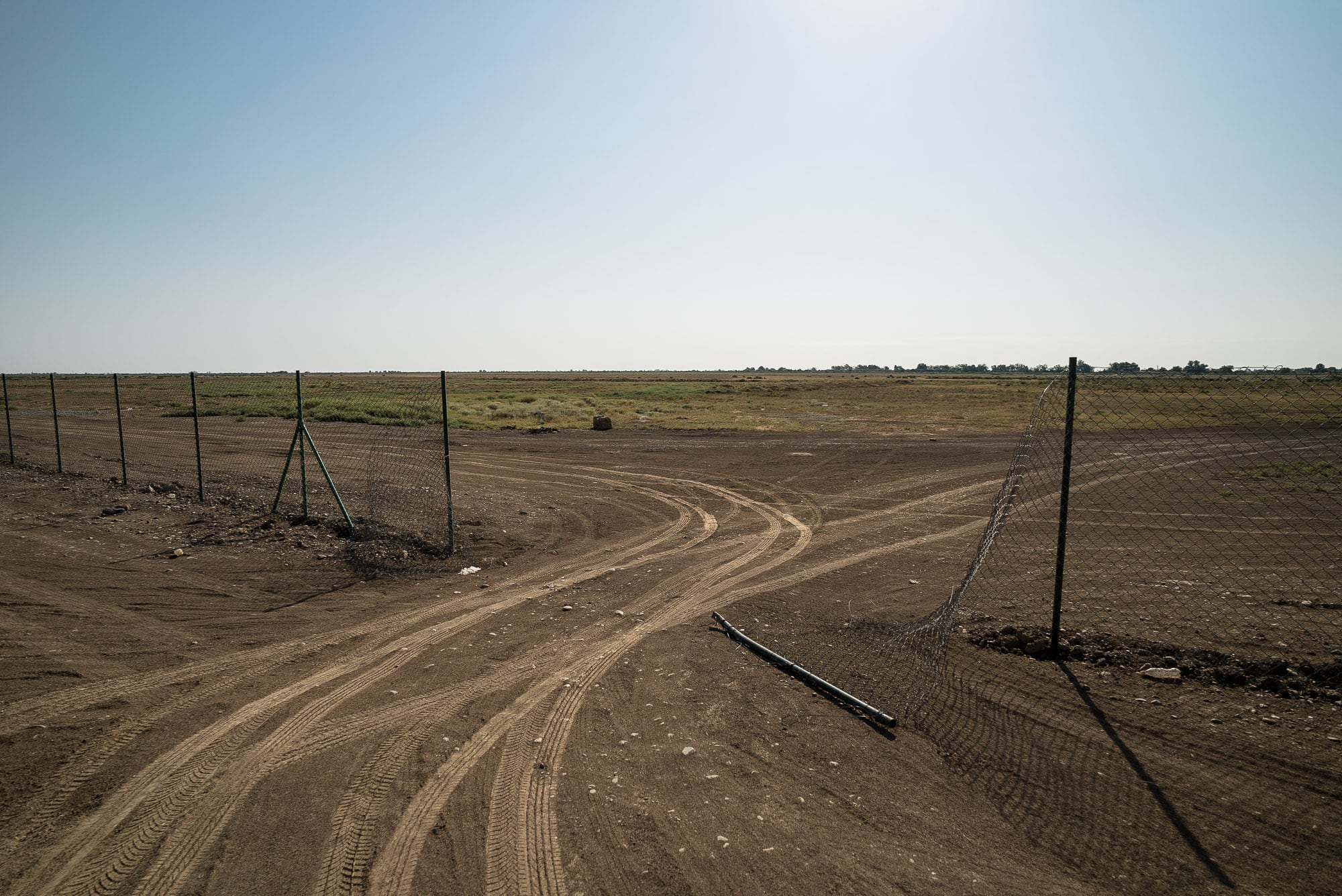 Once I made it to the old highway, I ran into Sarah from Spain: 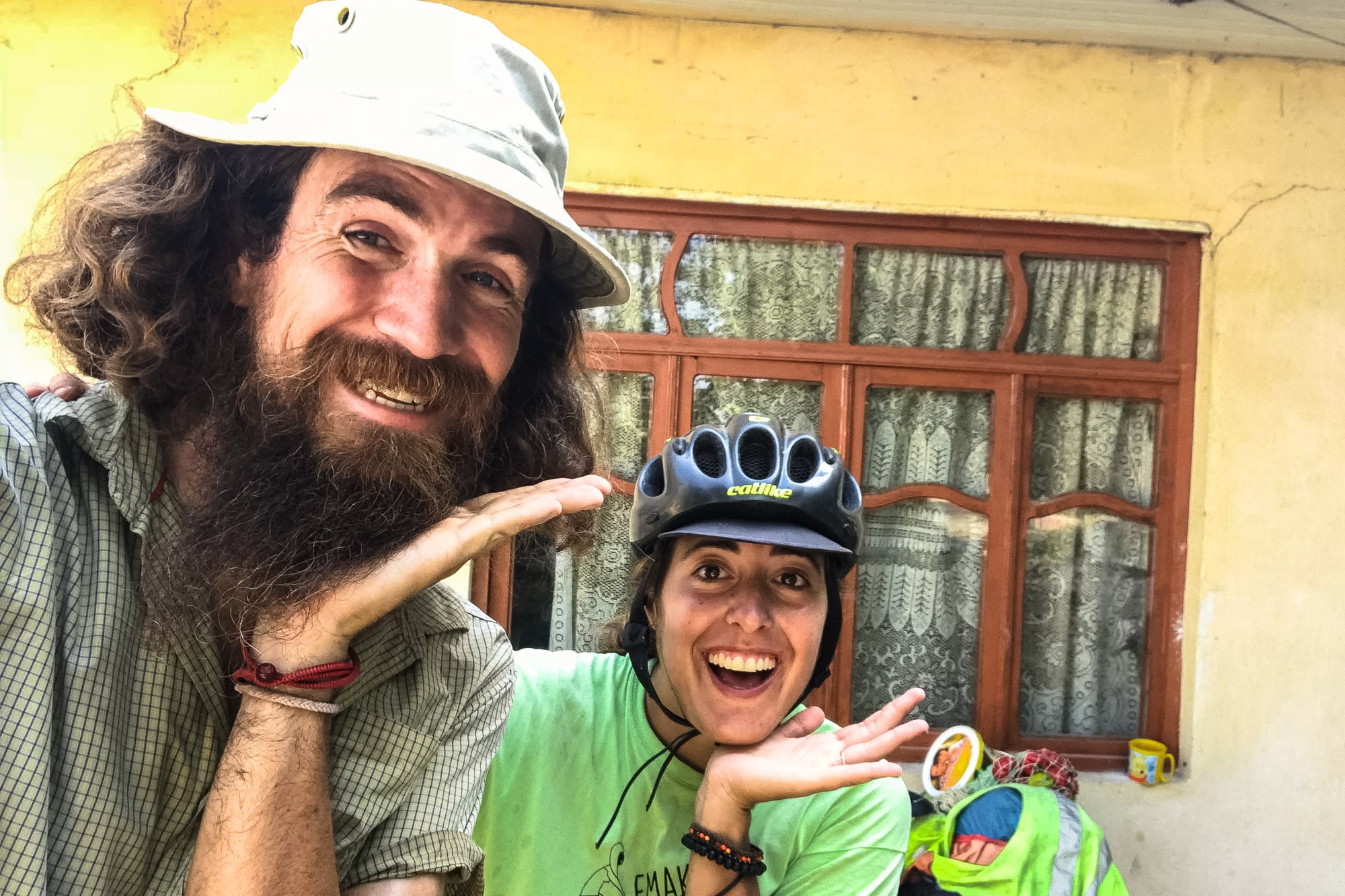 She was riding her bicycle to Iran, and it turned out she came from Santiago de Compostela, the Galician town that attracted thousands and thousands of pilgrims every year. Walking pilgrims.

I had run out of water at this point. So I was very happy when Sarah showed me the way to a small restaurant on the road. I drank water from a faucet, which I usually try to avoid. Then I sat just there and marvelled at this fish: 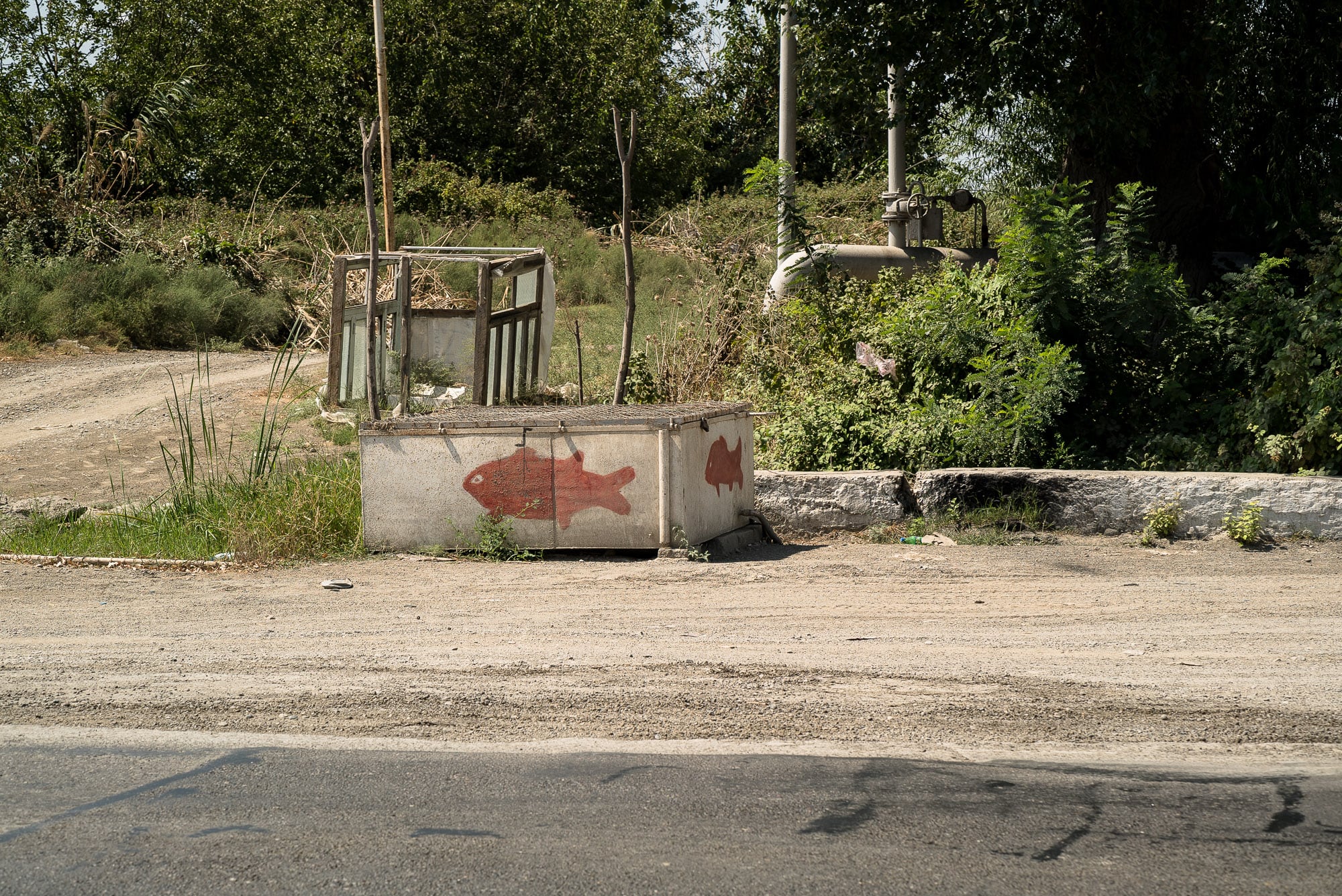 The next restaurant I walked past had a fridge full of bottled water, and it also had cold Snickers bars: 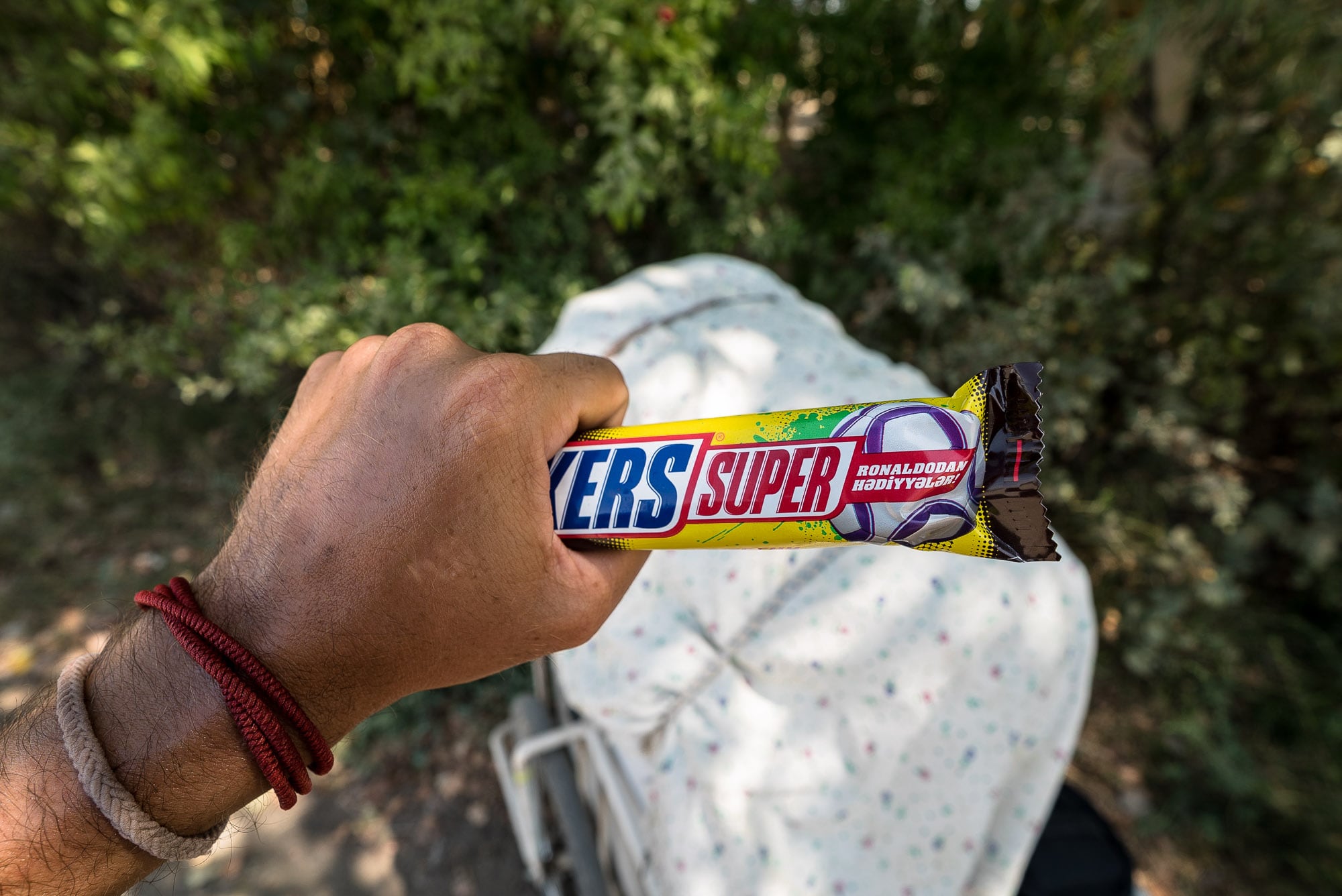 So that was pretty awesome.

I sat down for some tea with this friendly family: 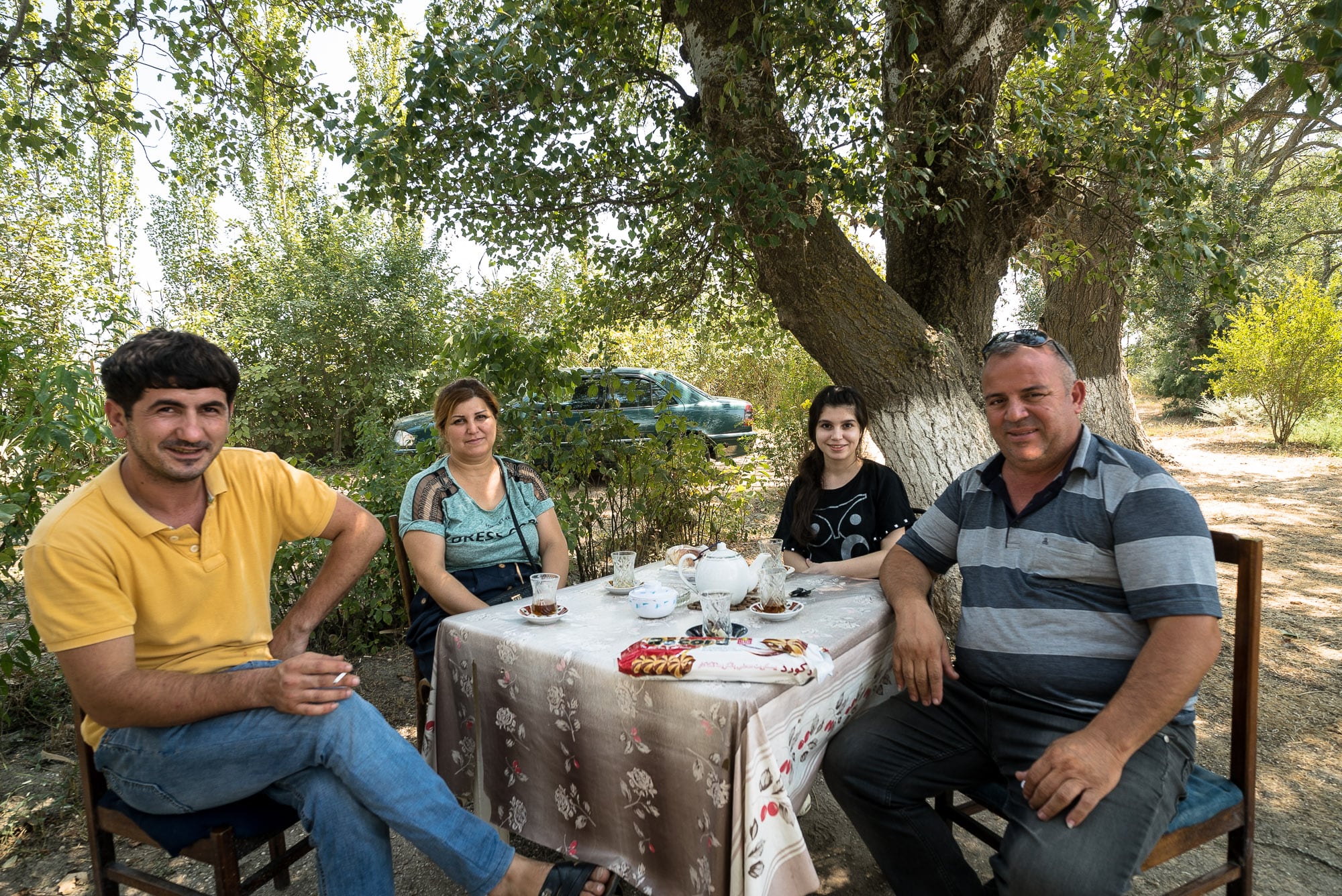 And then I walked: 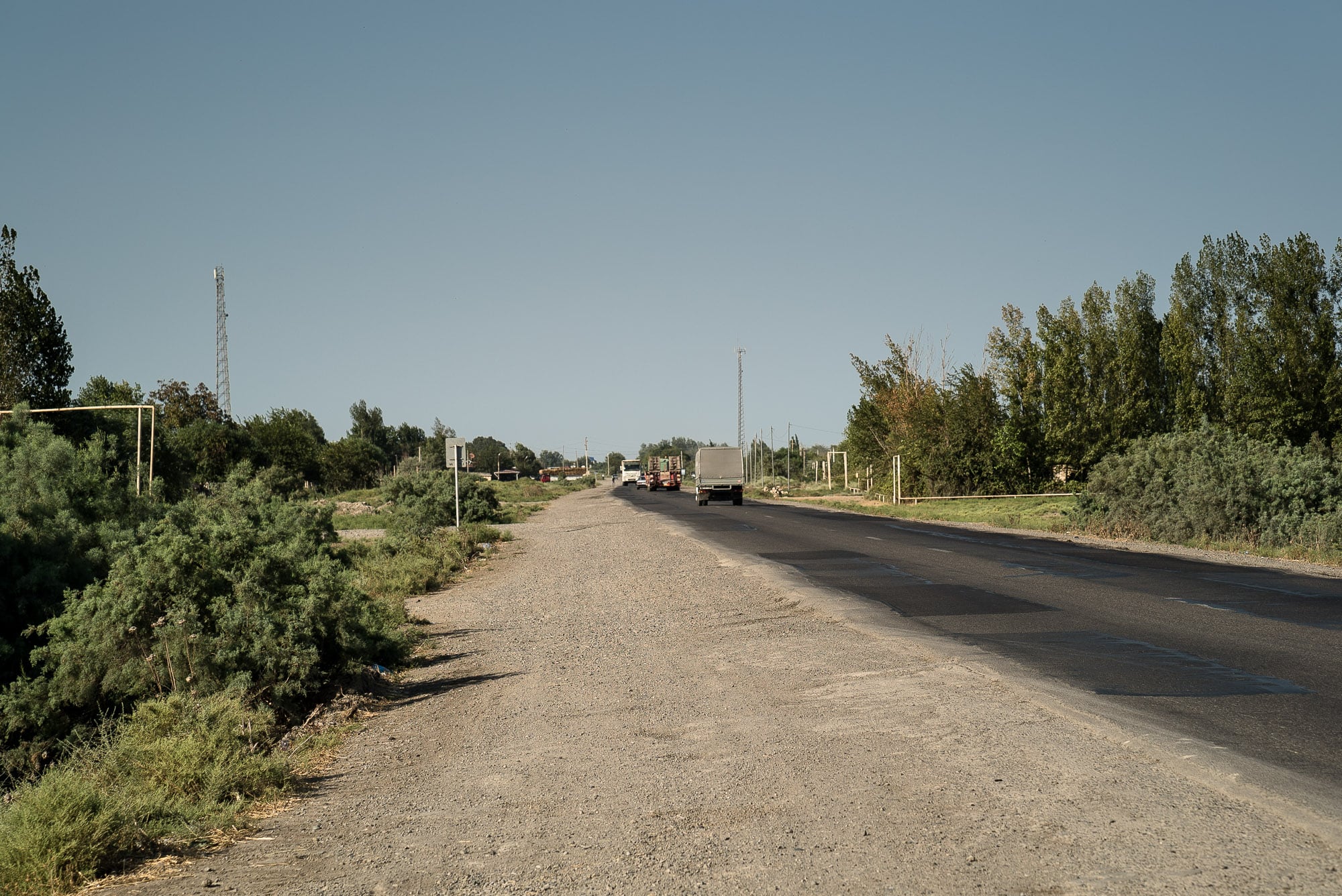 The road was no good. It was as narrow as it was busy: 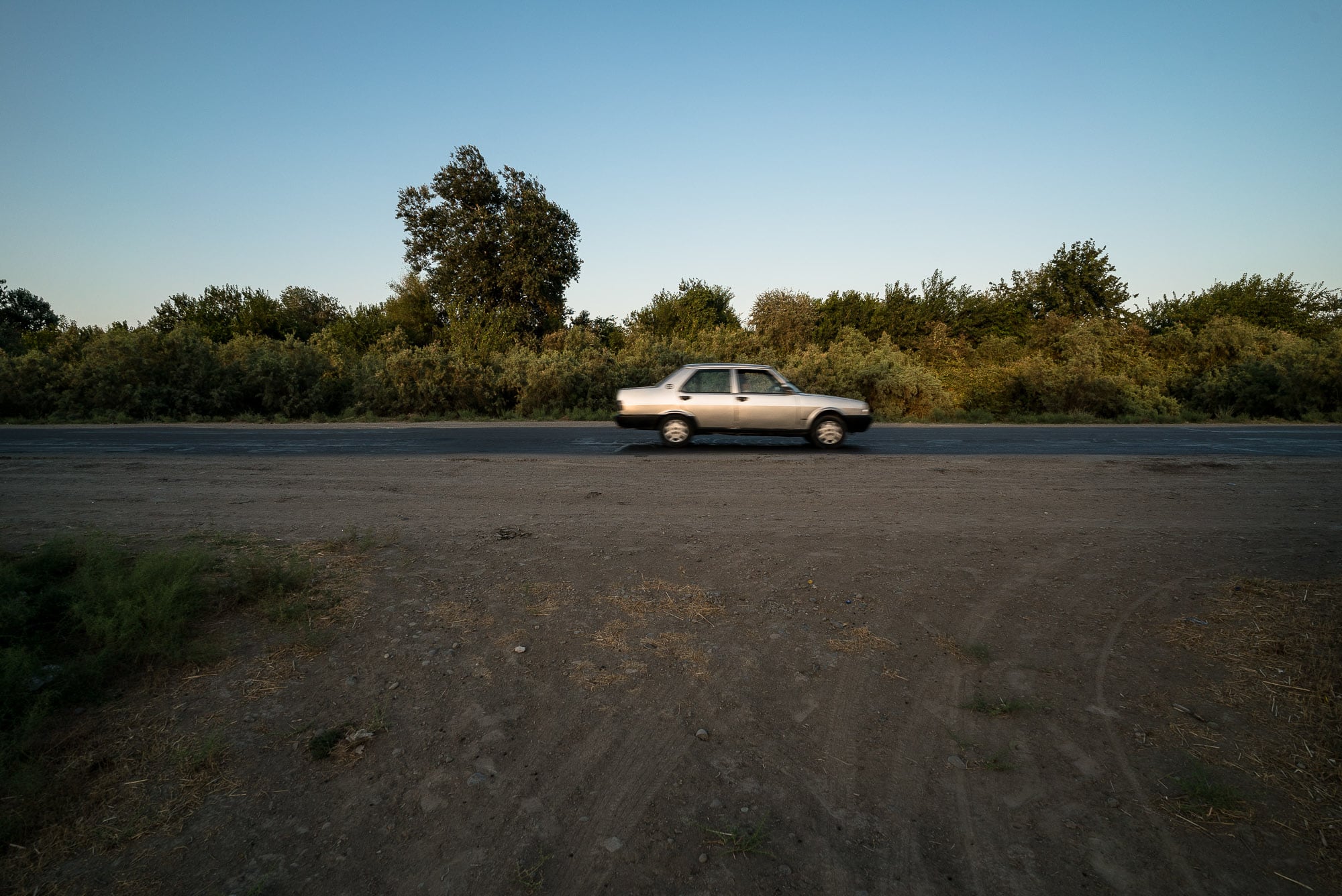 I sat down and rested for a little while in this place: 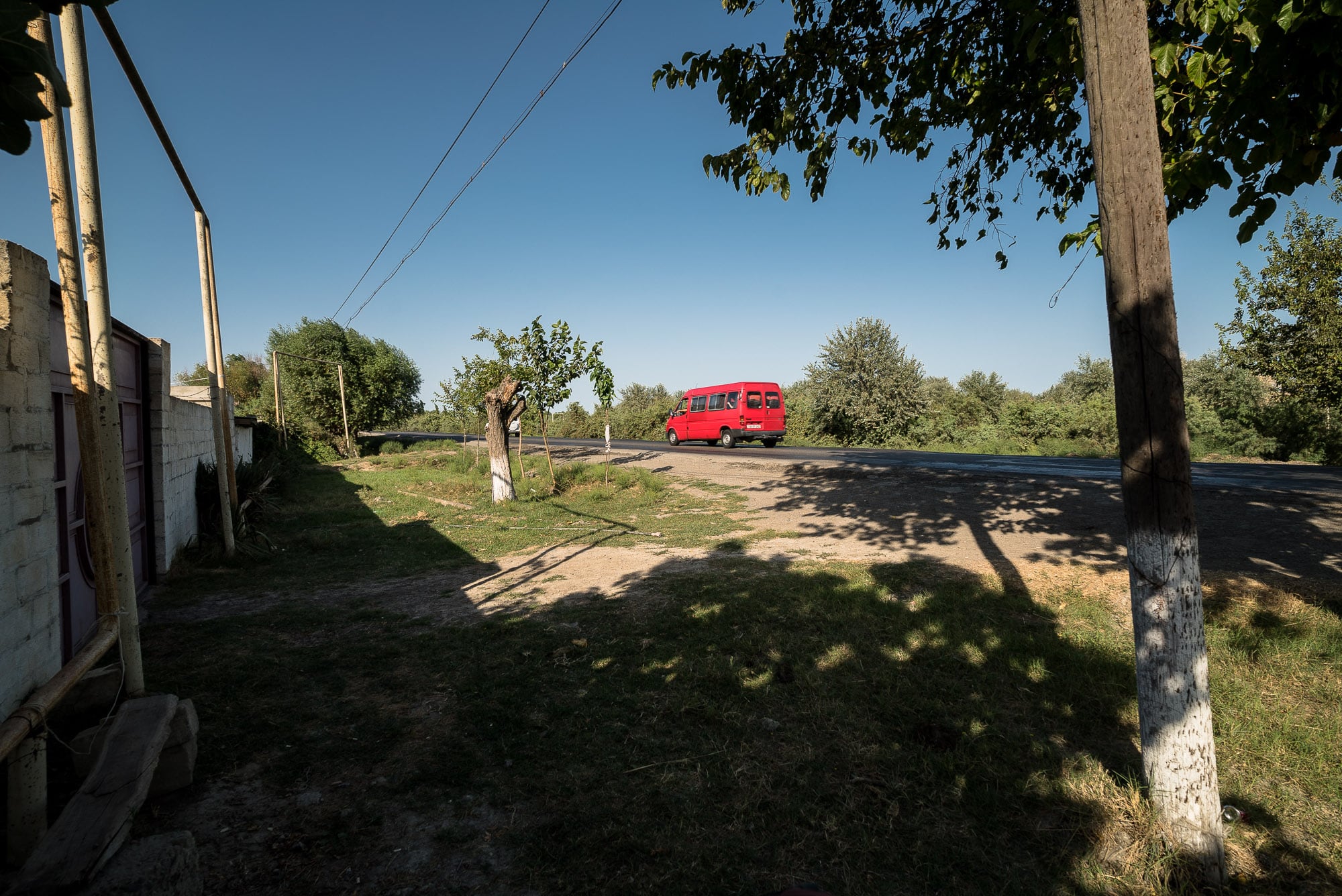 And when I continued I somehow left my pink plastic stool behind. I only realized my mistake about an hour later.

Panicking, I went into a roadside restaurant and asked if there was anyone with a car who could take me about five kilometers back. “To do what?” they asked. To pick up a plastic chair, I answered. “Just buy a new one!” they said. I don’t want a new one, I answered. It was a set of two chairs that I had gotten a few months earlier in Fereydunkenar (actually they were from a shop in Babolsar), and I had grown quite fond of them.

So I got into a car with a dude, and we ended up finding the lost chair: 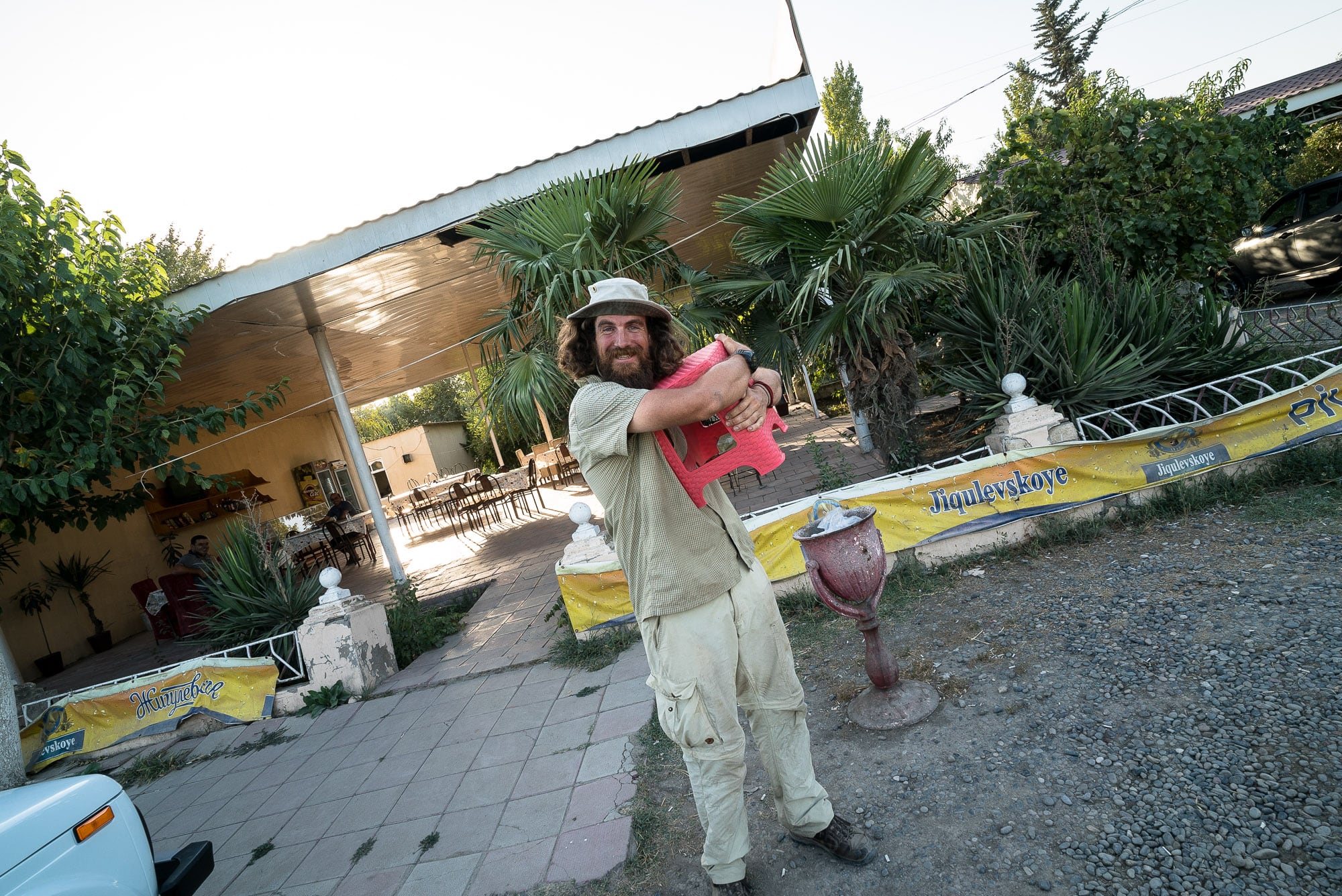 Sometimes it does seem as though you don’t know what you’ve got until it’s gone.

I hung out with the people at the restaurant for a while, then I continued walking. I walked way past sunset: 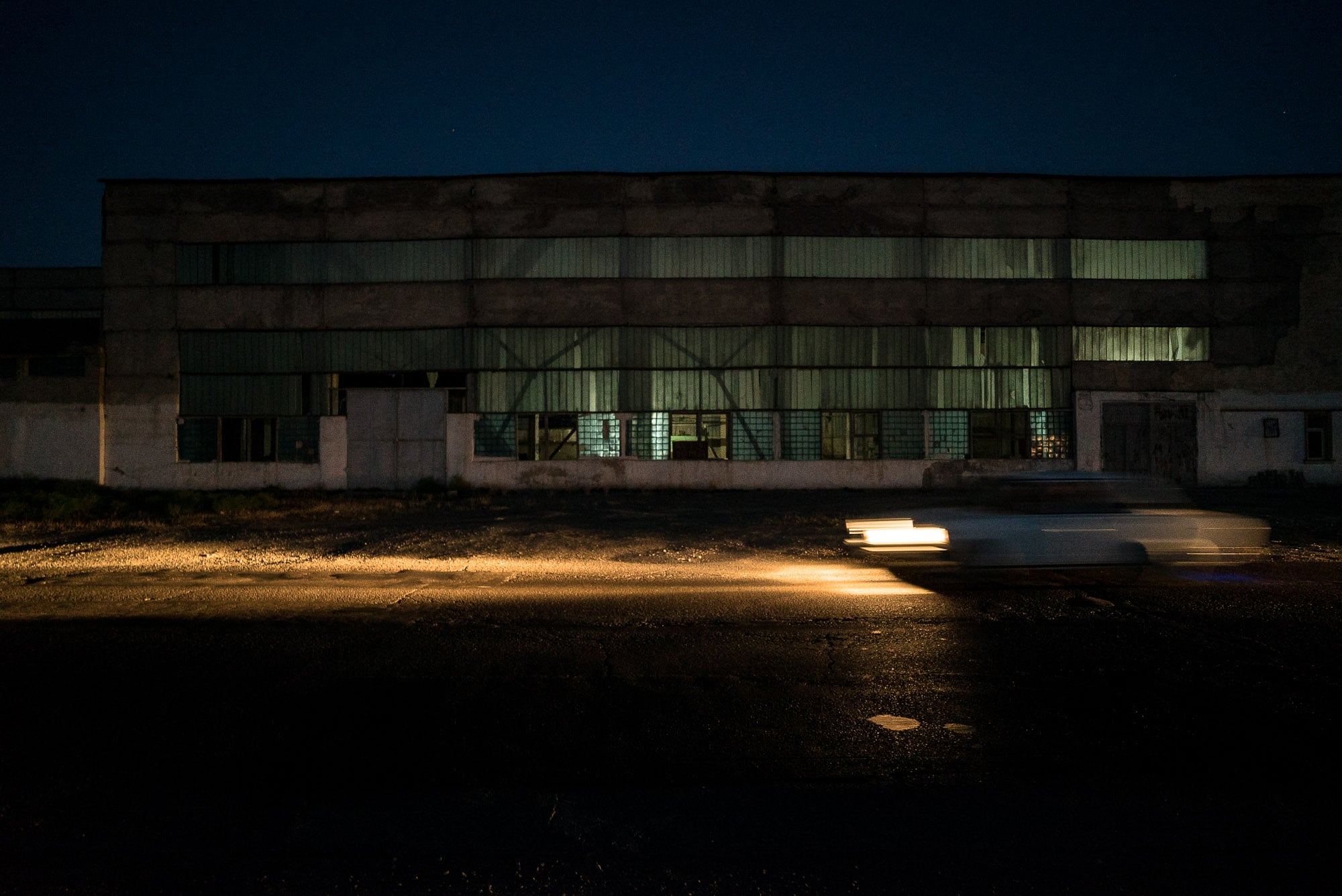 And I walked until the last rays of light disappeared: 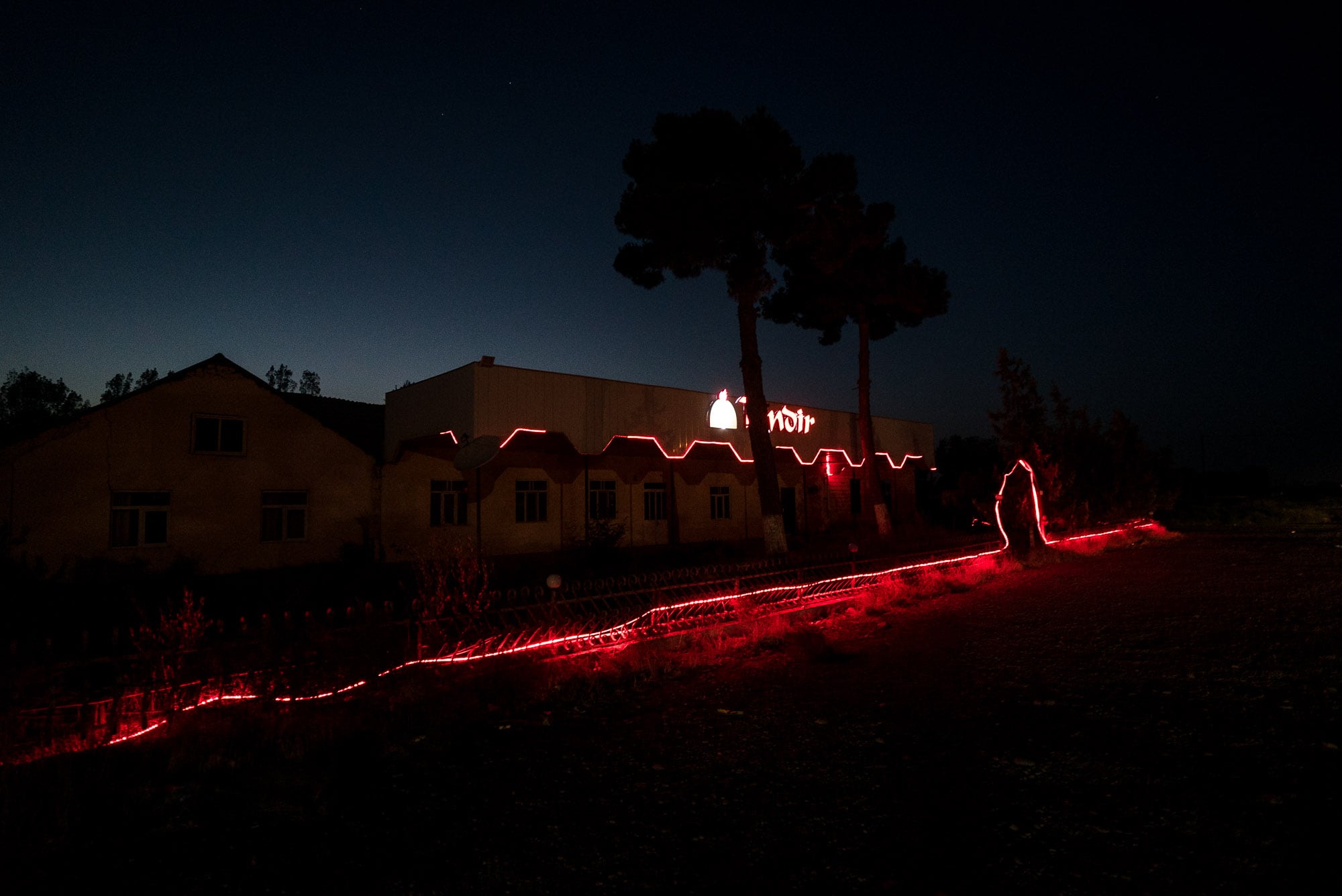 When I finally reached the small town of Salyan, I had my first warm meal in three days – a döner: 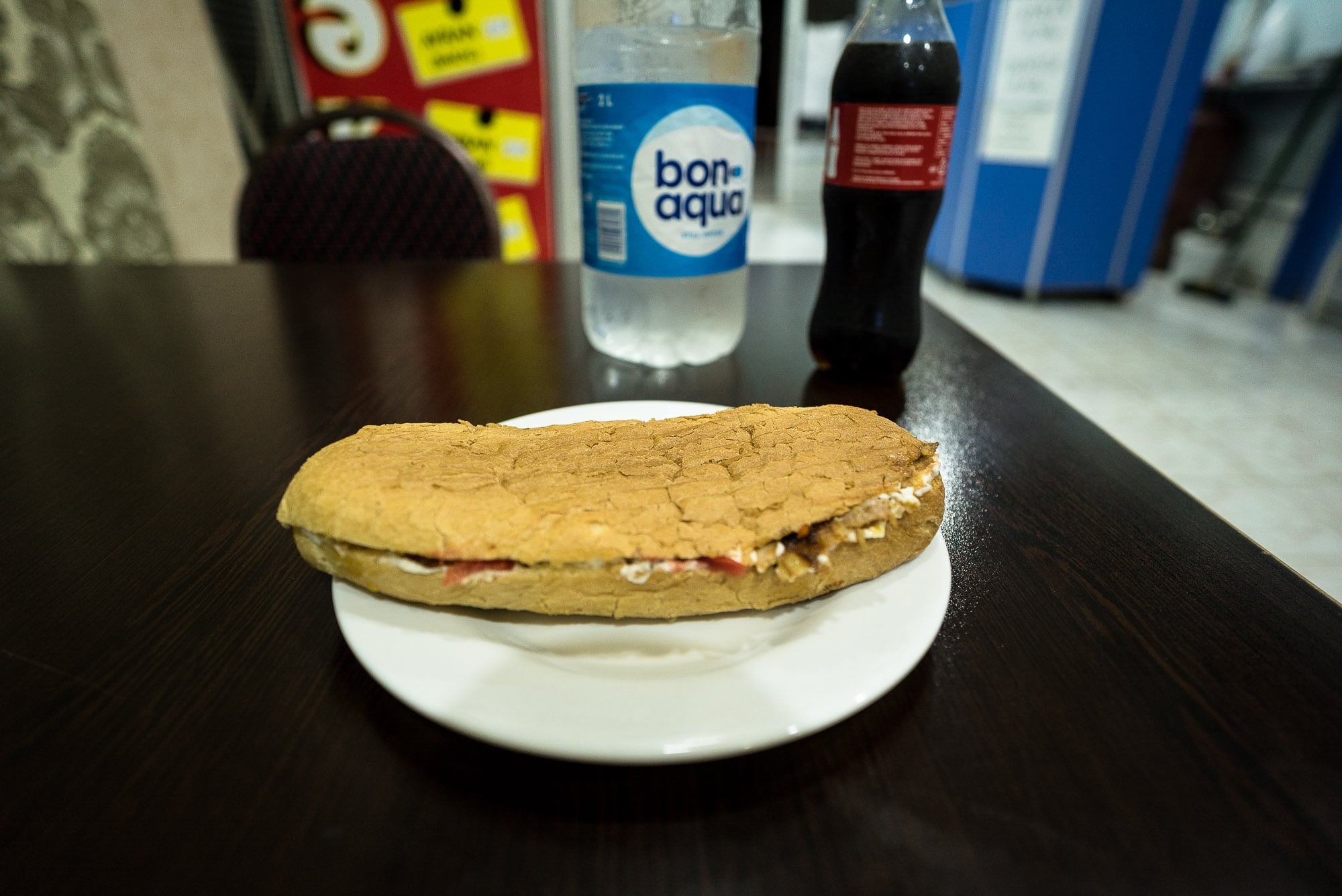 It didn’t look very sophisticated, but the taste was good.

Then I walked a little more down the quiet streets of Salyan: 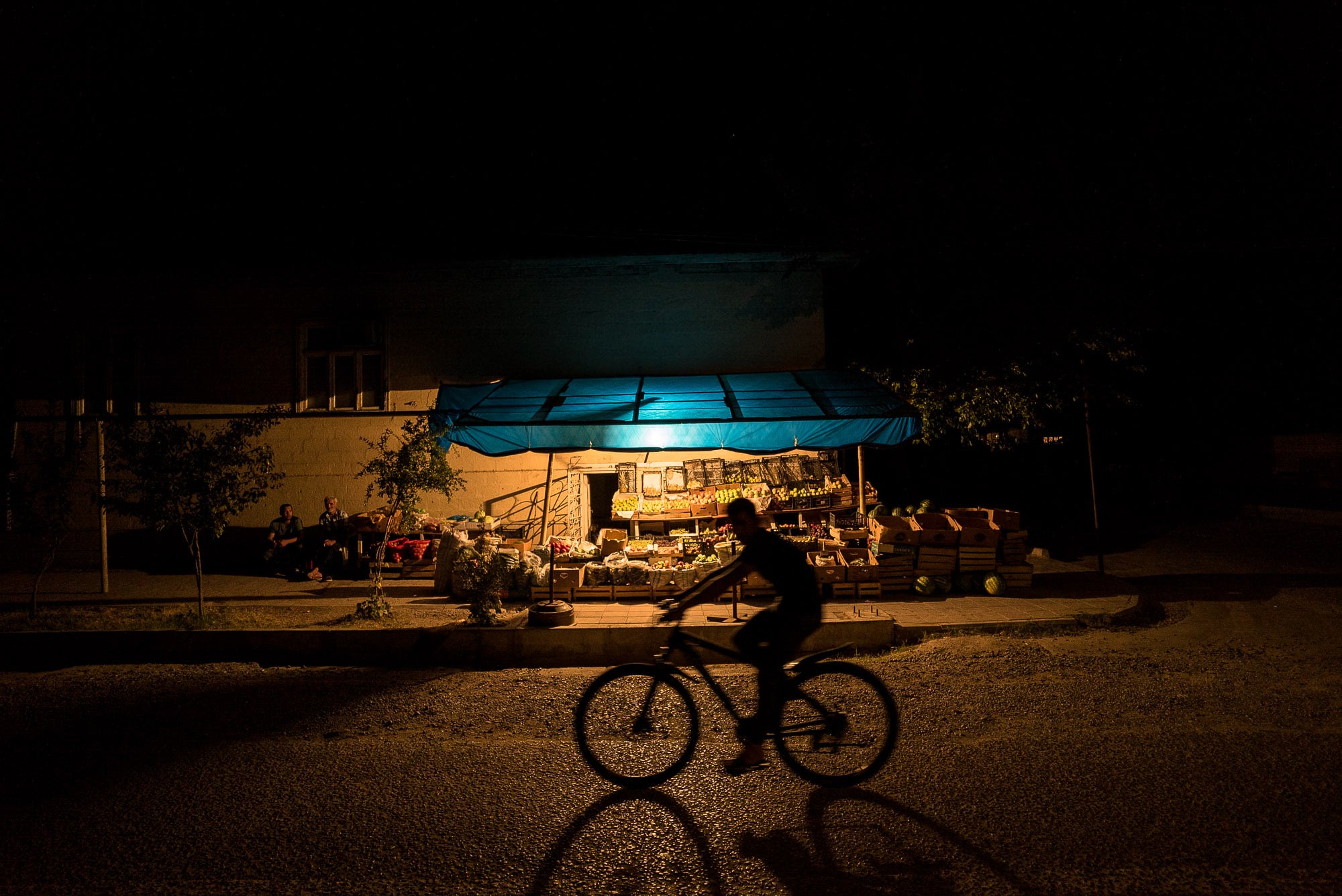 Two dogs followed me for a while.

Until I arrived at a hotel.

Day 1204
from the next bridge to Salyan

Activity: walking
Soundtrack: Janet Jackson - "Got Til It's Gone"