This post is about God’s Bridge in Ponoarele. It’s a natural bridge that used to be part of a cave, and there’s a cave next to it.

When I woke up I could hardly move. Even just taking the stairs in the guest house felt difficult. Everything hurt.

But I needed to get some food. Also, there was a natural bridge called God’s Bridge in Ponoarele, the village where I was staying. And next to the bridge, there was a cave.

I languished in the room until the early afternoon, having apples with peanut butter. Then I got up and walked over to the cave. It was like a whale’s mouth that opened in a rock.

When I went down into the cave, the temperature dropped continuously with every step until it felt slightly too cold to be wearing just a shirt. I didn’t go far. There were bats in the cave, and you were not supposed to disturb them.

I stood in the darkness for a while. There were dripping sounds that echoed from the walls. There were little plants clinging to the rays of light that reached the inside of the cave. I picked a tiny fern and put it into my notebook.

The natural bridge was right outside the cave. It was a rock that had been hollowed out by time (or maybe it had been part of the cave?) and it was the pride of the village. This natural bridge, they said, was the only one in Europe (or in the world?) that vehicles were allowed to drive on.

I went and got a nice lunch of mashed potatoes with yoghurt in a fancy restaurant. Then I bought a bag of pasta and a sauce. The guest house had a communal kitchen, and I felt like overeating.

And overeat I did. 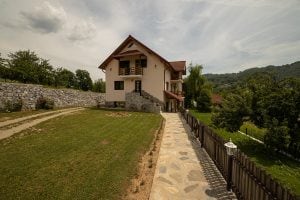 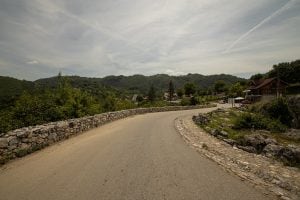 the surface of the natural bridge 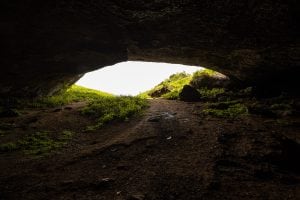 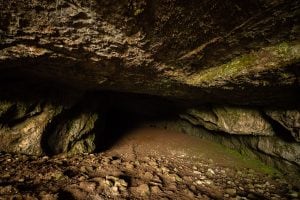 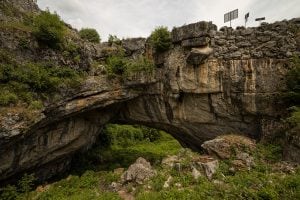 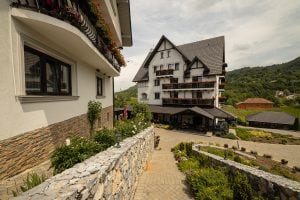 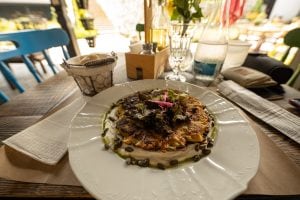