This post is about a visit to the Rila Monastery. It’s the biggest and oldest monastery in Bulgaria, but it was rebuilt in the 19th century.

We decided it wasn’t time yet for me to leave. And so we had a lazy breakfast, and then we got into my friends’ car and went southwest, into the mountains.

It takes two hours, then we’re in the oldest and largest monastery of Bulgaria. It’s called Rila

Is it really that old, though? In the ninth century, when Bulgaria had just become Christian, a monk decided to come here, when there was only wilderness in this part of the mountains. The monk’s name was John (or Ivan), and they called him “the wondermaker”. They say he stayed outside on the rock without any shelter, and he lived like that for years. He was Bulgaria’s first hermit, and today he is considered the patron saint of the Bulgarians.

A lot of students flocked to him. They built a monastery near the place where he stayed, and it flourished for centuries. This was the original Rila Monastery. The Ottoman conquest put an end to it.

The monastery was rebuilt in the middle of the 19th century. So everything we see here is just a few decades older than the Statue Of Liberty in New York. The one thing that is older than that seems to be a stone tower in the center. It dates from the 14th century, before the Ottomans came.

The other buildings remind me of my last days in Turkey. The round arches, the red and white ornaments, the pillars – it all looks a lot like the mosques in Edirne.

I’m told that I’m lucky to have come here on a weekday. Otherwise the place would be crawling with tourists. Today it’s just crawling with me and my friends and a few other tourists like us.

We look at the buildings around us. Most of them are closed because monks live in them. And we look at the church where a guard tells everyone that they may not take pictures. It’s a pity because the inside of the church is very colorful: every inch is painted over with pictures of the Saints, of Jesus, of the mother of Jesus, and of scenes from the Bible.

On the outside of the church there are are a lot of pictures of hell. Demons and flames and unlucky souls. A conversation comes to mind, I think it was in Iran. I was talking to some Muslims about religion and they told me that they were scared of churches because of all the gory art. 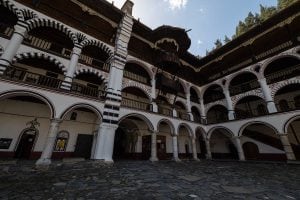 inside the Rila Monastery 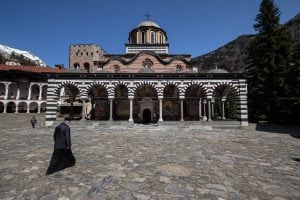 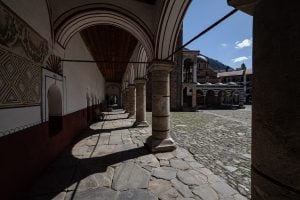 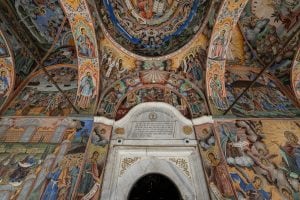 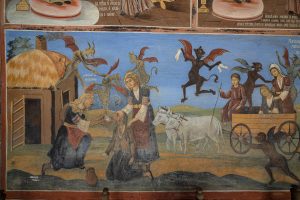 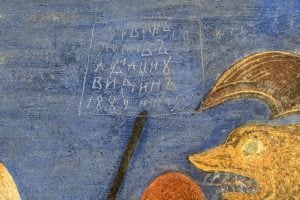 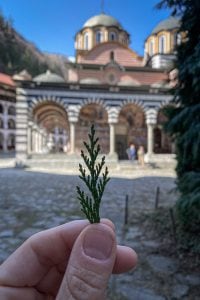 I picked a leaf