This post is about my return to the village of Lozen in Bulgaria. I take a walk with my friends and hang my martenitsa into a tree.

After a month and a half in Germany, I finally got back to Bulgaria. I was nervous. Not about my MS: my doctors had put me in an MRI and then hooked up some wires to my head, and in the end they had told me that everything looked good. But there was something else: my left knee hurt.

I didn’t know what it was. It had started on the day I had left Bulgaria, and while I was in Frankfurt it had gotten so bad that I was walking with a limp for a while. I had seen two doctors, my physical therapist, and my acupuncturist about it. They had all told me it was going to be okay. And it had gotten better. I was walking normally now, but I didn’t quite trust it. What if it started hurting again? What would I do?

Upon my return to Lozen my friends and I took the dog Missy and went for a walk in the fields. The sun was out and it was a lot warmer than in Germany. I had just arrived a few hours earlier, and it felt good to be back. The Caboose was in her garage, and she looked good. I was walking in my t-shirt.

I took off my martenitsa once we passed a blooming tree. The little piece of red and white yarn had been with me from the 1st of March, when I had left Bulgaria, until today, when I returned. I hung it between the blossoms, as was customary, hoping it would bring some luck, both for me and the tree. 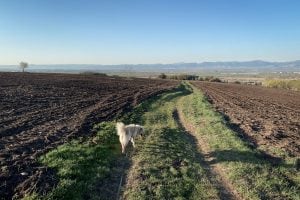 a walk with Missy 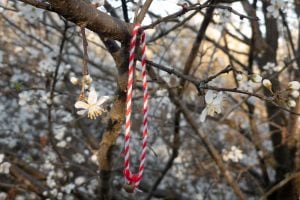