This post is about a 12km walk in Istanbul. I pass Taksim Square and cross the Galata Bridge. Then I take a rest at the Hagia Sophia.

One morning my phone stopped working, and I had a message from Turkcell telling me that my time was up. They were right. I had spent three months in Turkey, and my visa-free stay was over. I was now illegally in the country.

A visa agency and an immigration lawyers had told me that it wasn’t a big deal. As long as I didn’t overstay by too much I would just have to pay a fine at the border, they had said.

Anyway it seemed like it was time to leave.

what happened to Taksim Square

I started walking on a cold and windy Monday afternoon. First I went to a café where I had spent a lot of time in the days before. I stopped and said goodbye, then I wormed my way through traffic until I was at Taksim Square.

The square had a weird vibe to it. Major protests had taken place there almost ten years earlier. Today it seemed to be only populated by passersby, by tourists, and by police. And apparently by thieves. As I was standing there a cop came over, took a look at the Caboose, told me I was crazy to leave my camera bag open, and warned me about pickpockets. “So many” he said, waving his hand generously over the square.

the bridge and the park

When I got to the Galata Bridge it seemed like an accomplishment. Here, again, was a bridge that spanned something important. This time it was the Golden Horn. I could see the Hagia Sophia in the distance, and I had the Caboose with me. After all the deserts and the rivers, it felt meaningful to be here.

I watched a bunch of men fish on the side of the bridge for a while, then I crossed it and went to Gülhane Park next to the Topkapi Palace. The park felt like a mirage – the trees were so high and the paths were so empty. I could hear birds singing, and for a few minutes I almost forgot that I was in a city of 15 million.

Why hadn’t I come to this place earlier?

The area around the Hagia Sophia was cordoned off by a police fence. When I approached the checkpoint, I wasn’t expecting to be allowed in with the Caboose. But I thought I might as well try. Much to my surprise, the police officer, a young woman, smiled under her mask and waved me in. I decided to give her one of my TLW keychain fobs as a souvenir to remember us by.

Then I sat down in front of the Hagia Sophia. Again it felt like an important moment. The Caboose and I, we had finally arrived here on our journey back from China, on a cold and windy Monday afternoon in January 2022. 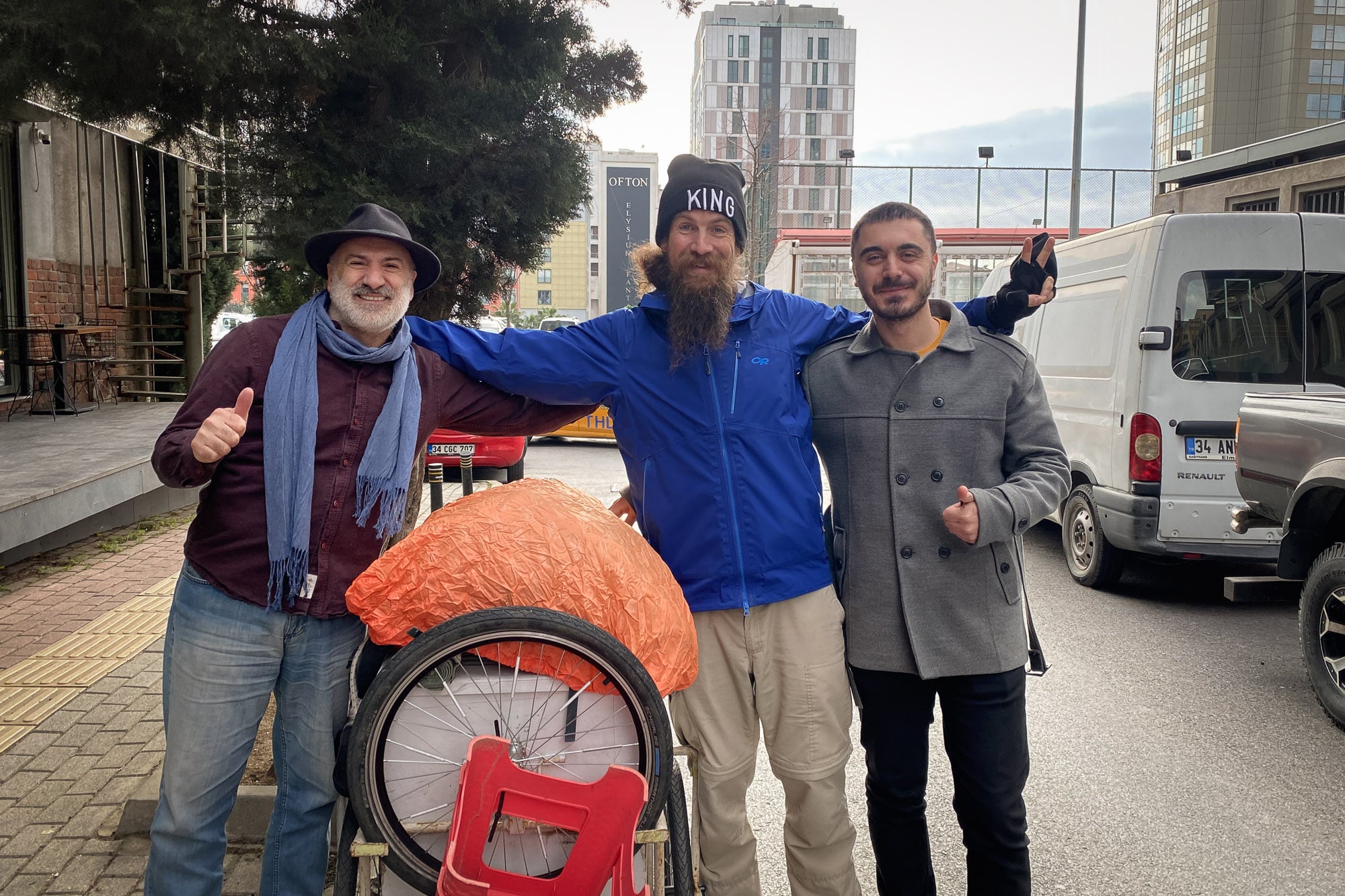 The Caboose at Taksim Square: 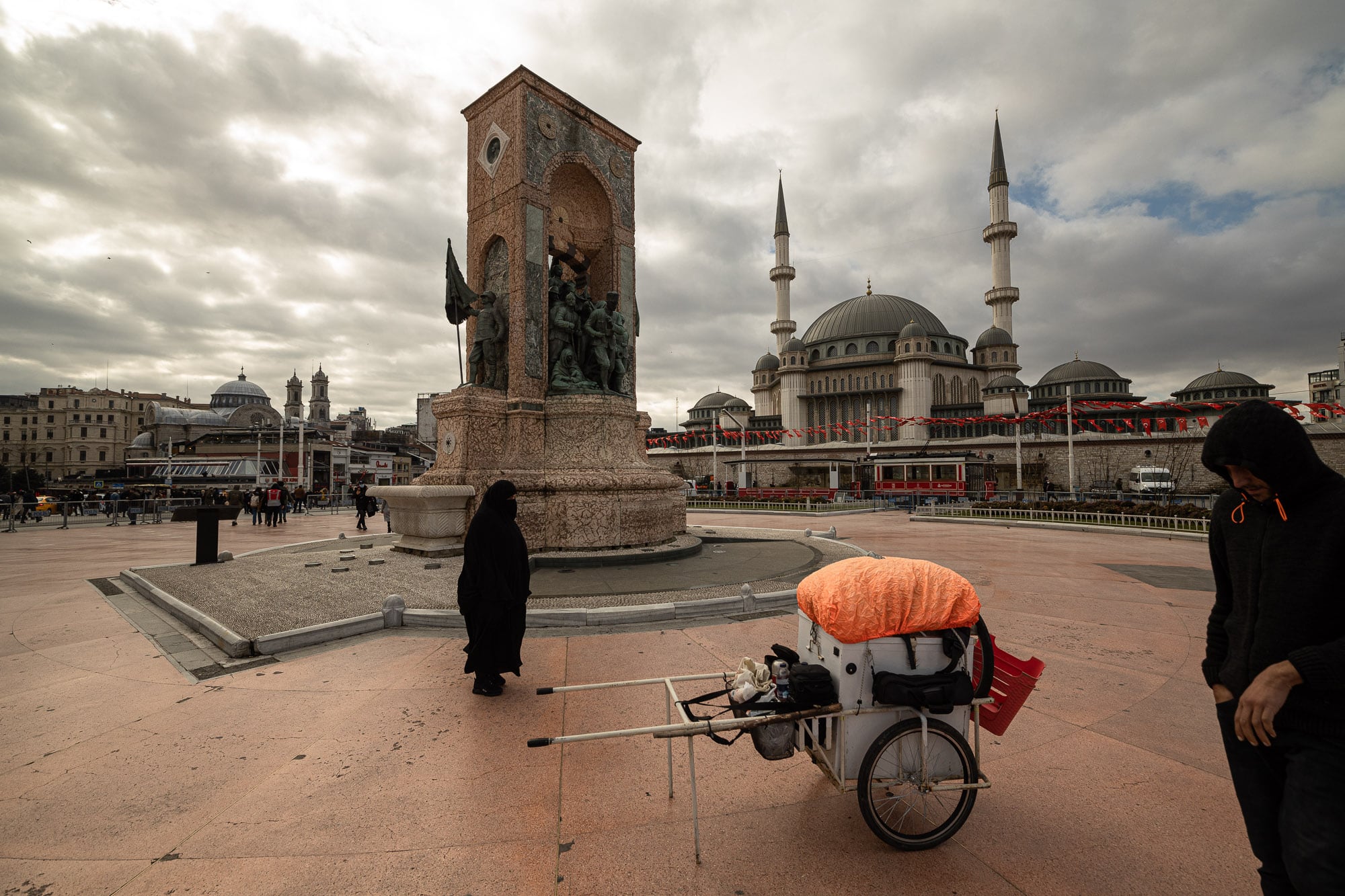 Fish on the Galata Bridge: 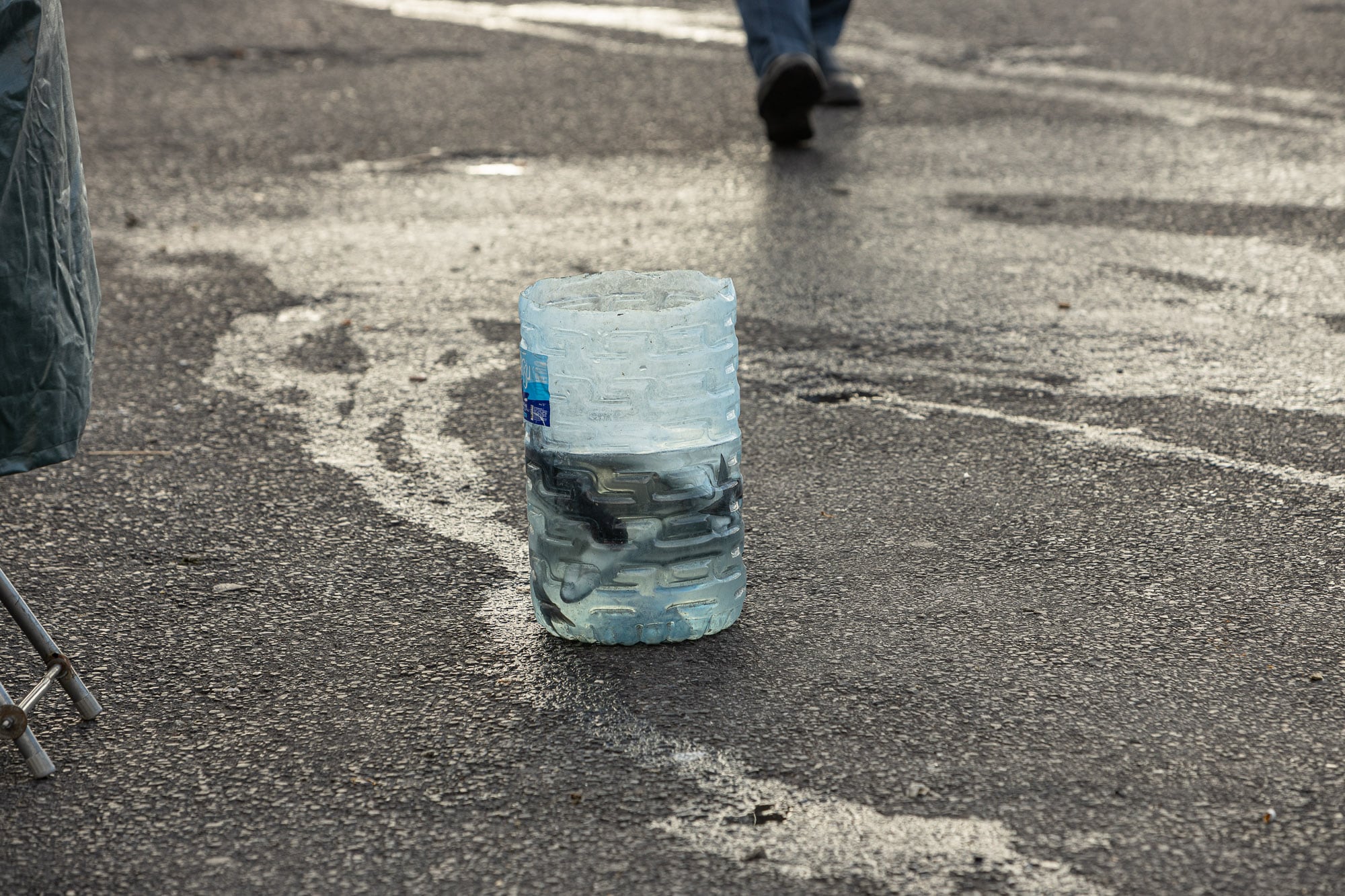 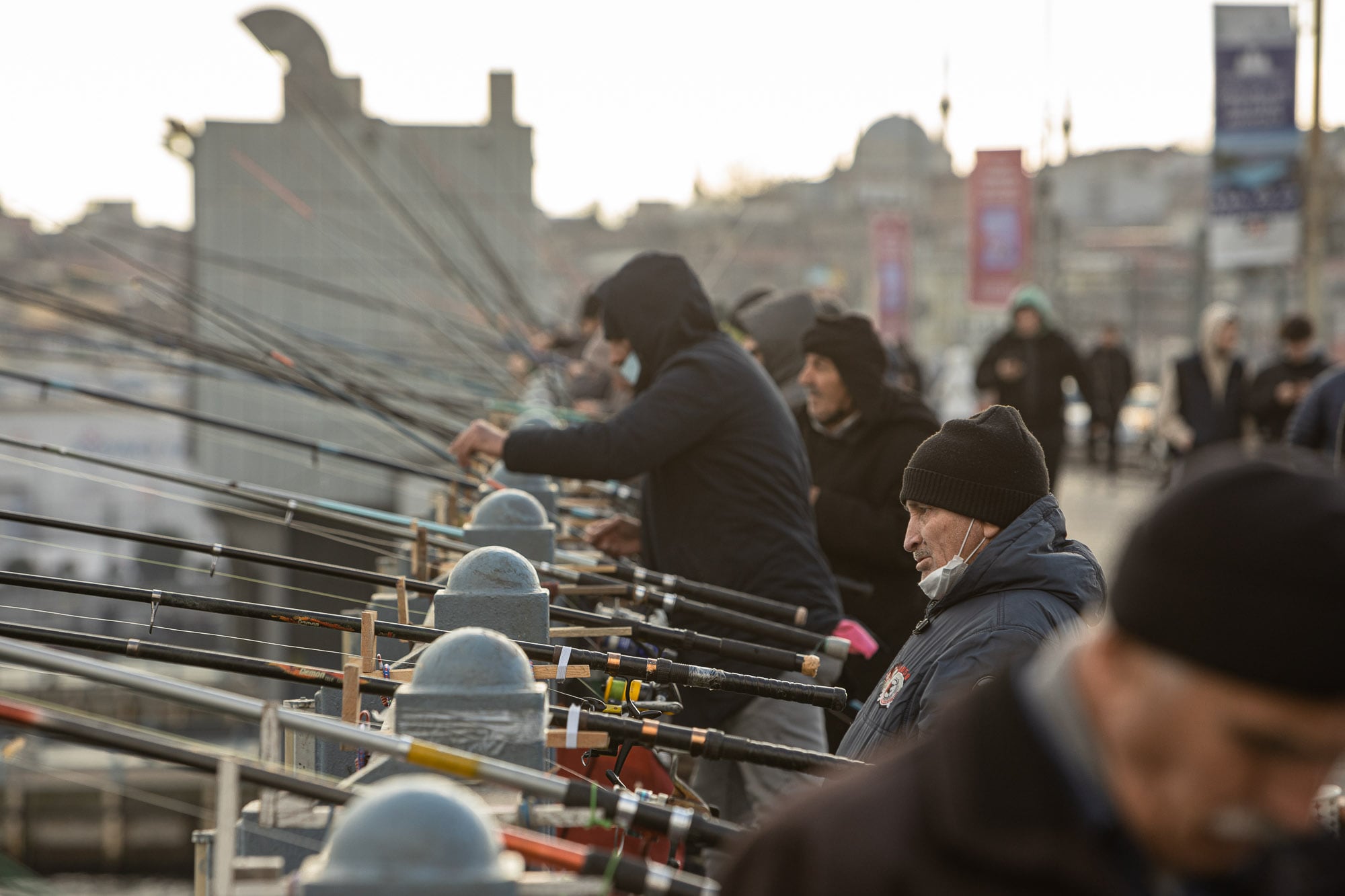 The Galata Tower and the Galata Bridge seen from Eminönu: 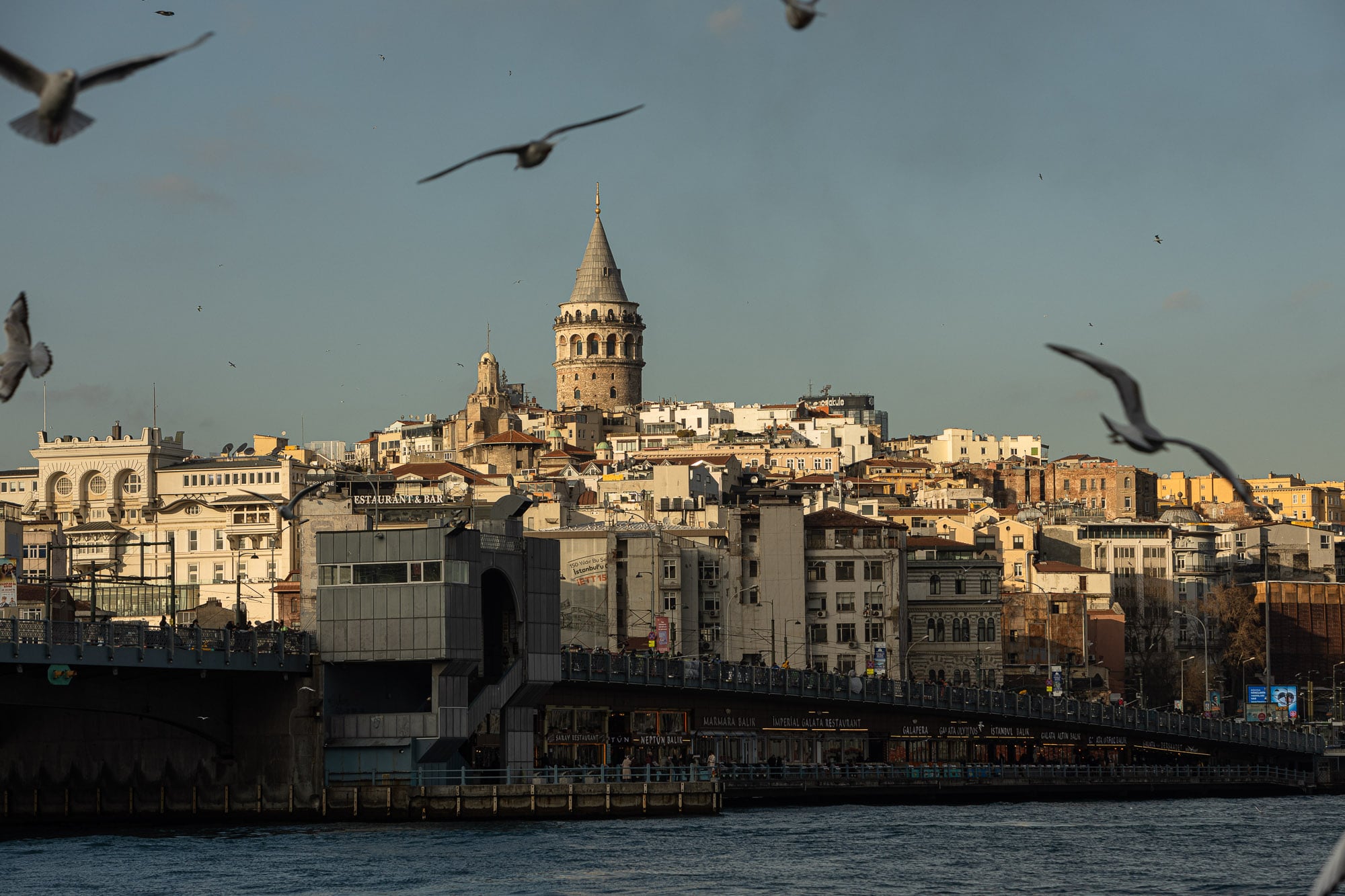 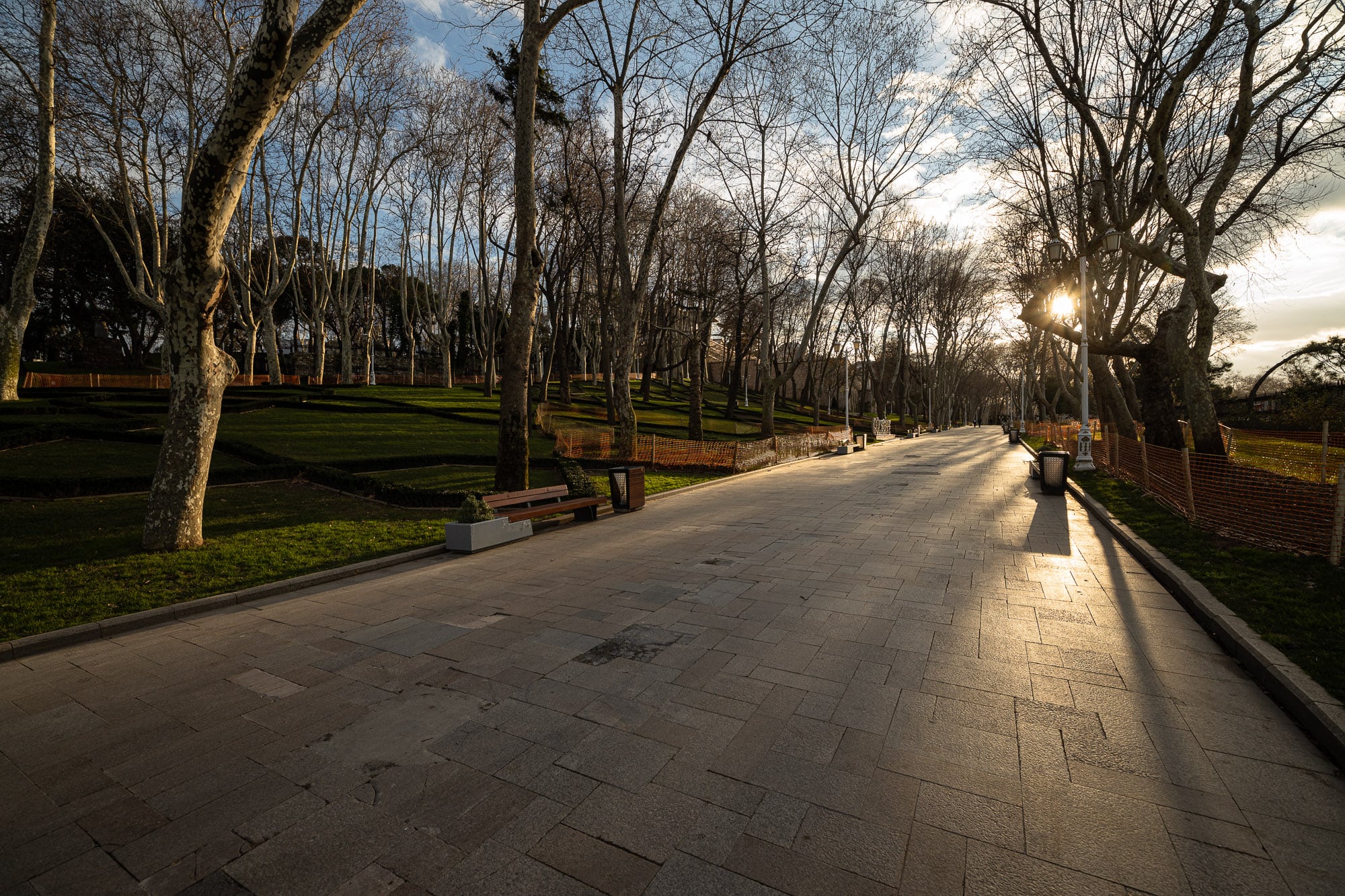 Facade of the Topkapı Palace: 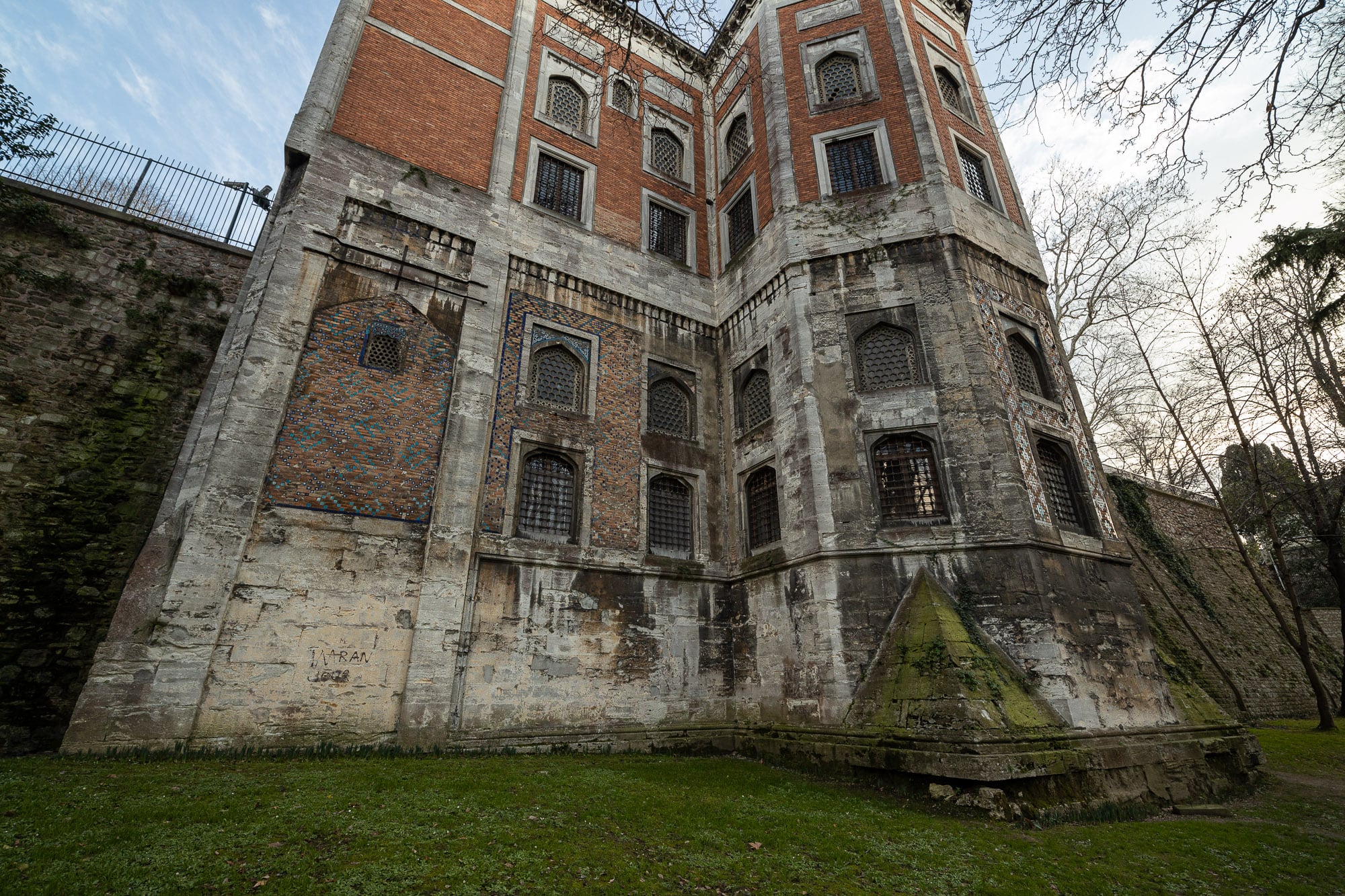 The Hagia Sophia in the evening sun: 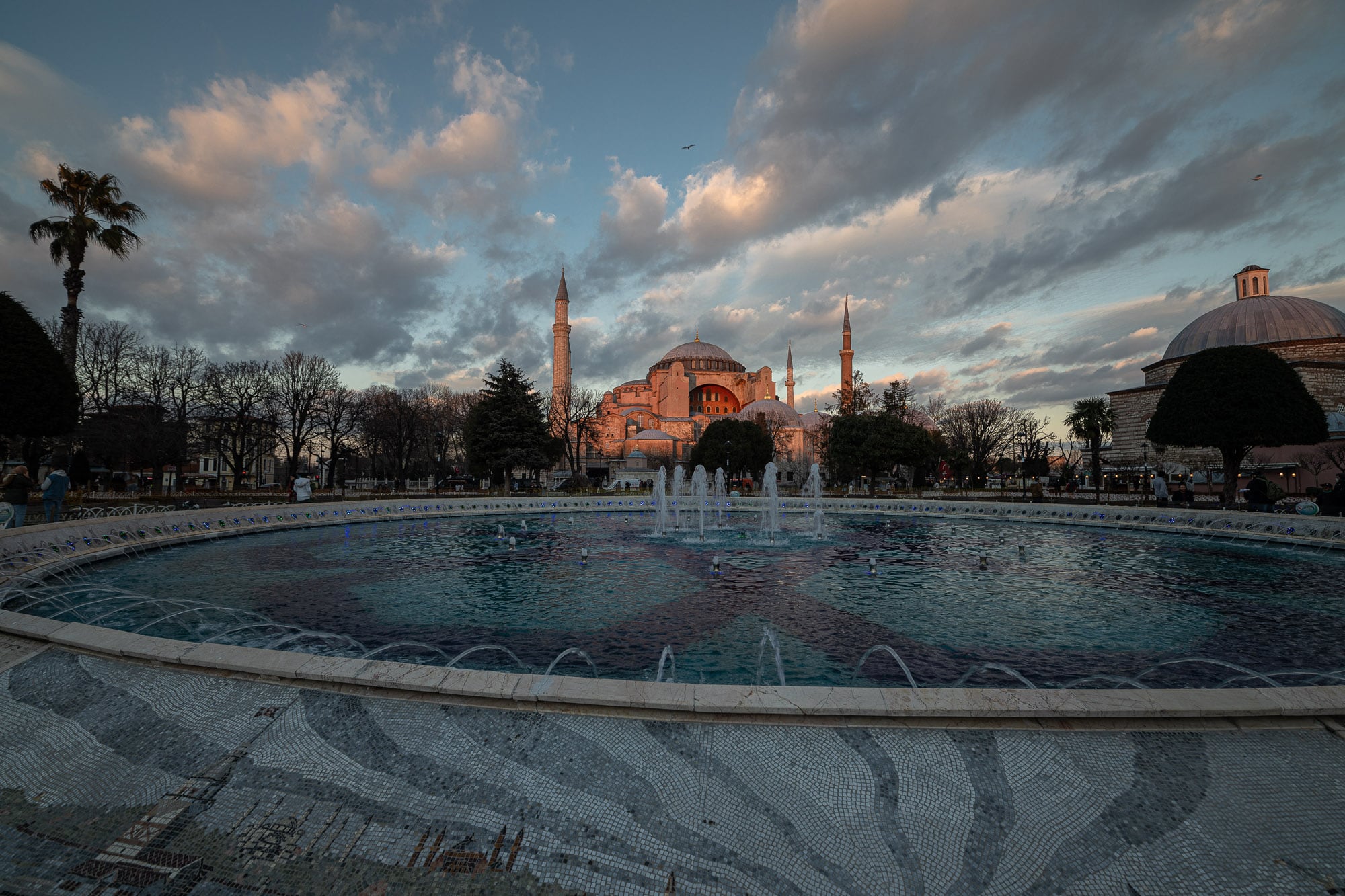 Back alleys of Eminönü, near the end of my walk in Istanbul: 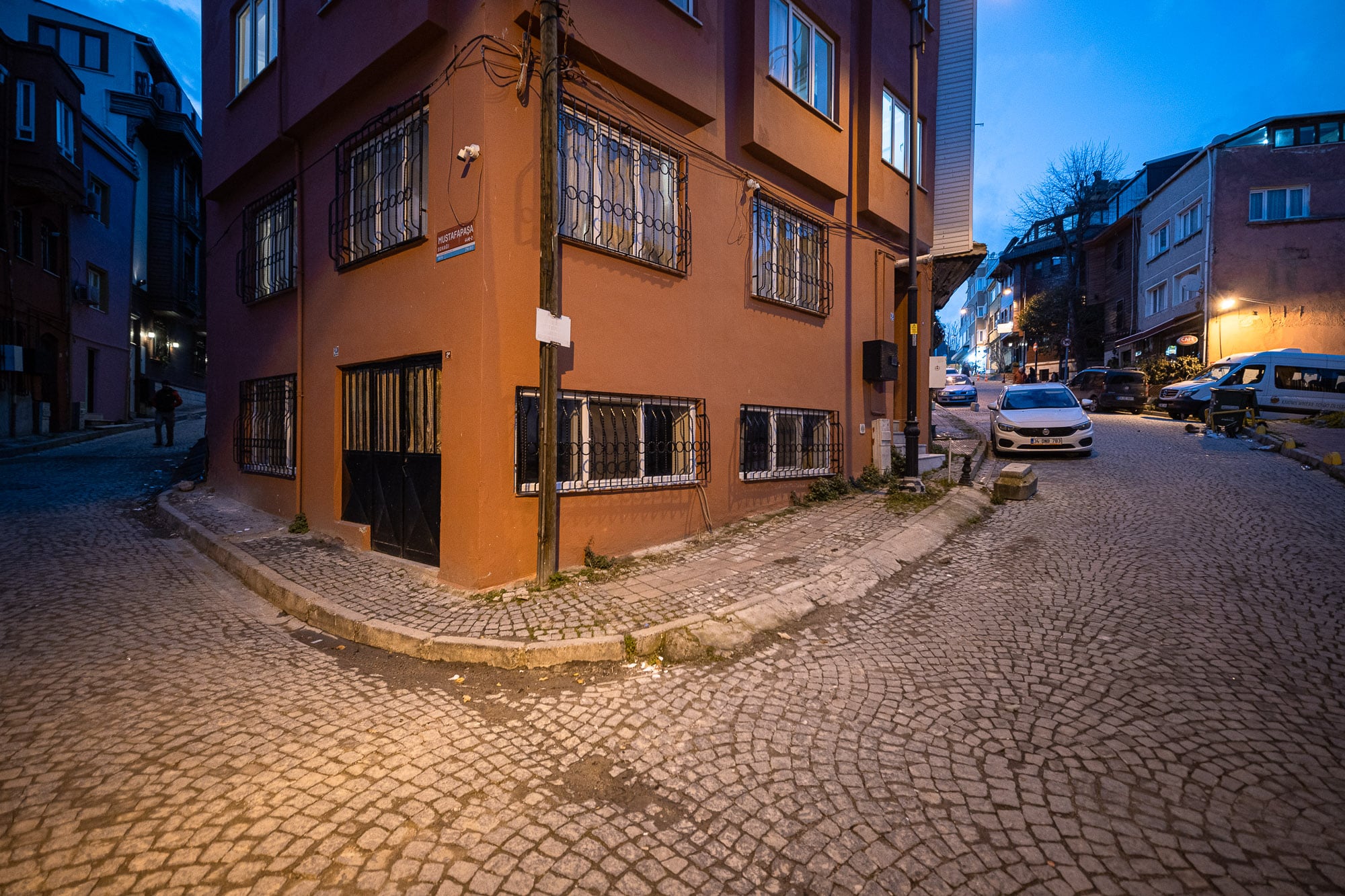 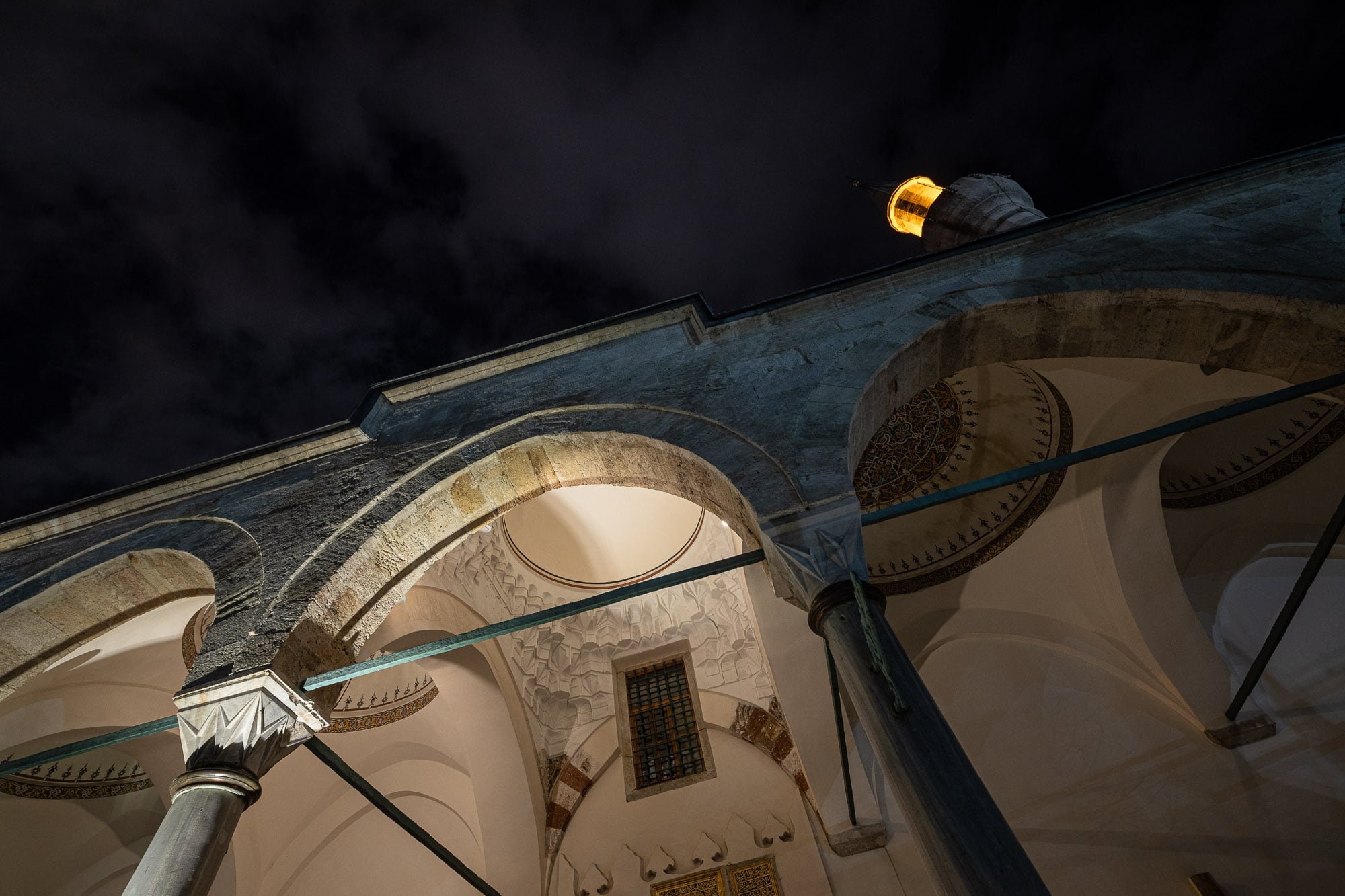 Day 501
from Istanbul to Istanbul