This post is about the town of Amasra. It sits on the Turkish Black Sea coast, and I found it a stunning place to visit.

I had managed to order my medication the day before, but the people at the pharmacy had told me that I could only pick it up on Monday. This was fine with me. I had washed some of my clothes and I was waiting for them to dry. Also, I needed the break.

And so I was in Amasra. I had heard that name before, and it had a magic ring to it. Amasra used to be called Amastris, and before that, it was apparently known as Sesamos.

Amasra is a small town hiding in a bay surrounded by forest and hills. There are two natural islands right in front of it. The bigger one is connected to the town via a stone bridge. The smaller one is home to thousands of seagulls.

Apart from the seagulls, there are three things that you will see everywhere in Amasra: cats, dogs, and tourists.

The cats hide in the trees and on the walls whenever the dogs try to catch them. The dogs are too lazy to be serious about catching the cats, and they have tags in their ears indicating that they’ve been checked and that they’re okay. The tourists are like me: they walk around aimlessly with their cameras, randomly stopping to stare at something here or there, and they are always in the way of each other, taking selfies.

Also, Amasra is full of guesthouses. It seems as though four out of five buildings in the old town are for guests.

Up on a hill, there’s a small Byzantine church. It has been here for more than a thousand years. It doesn’t look the part, though. After a thorough renovation a couple of decades ago, it became part of a museum. Sadly, when I got there its doors were locked. The guesthouses around it looked as if they were trying to creep closer.

Looking back I wonder: why were there were so many tourists? Was it simply because of the weekend? When I climbed to the top of the island, I saw a large parking lot for travel buses, and it was full. Maybe the day-trip to Amasra was a thing for people from the inland cities.

And there was something else that I noticed: when I heard a booming sound coming from a place right next to the buses, I looked closer and saw that there was an active quarry. It was right there, with a few workers cutting into the rock and loading it onto trucks. I looked down from the island, and the dust of the quarry mixed with the smoke of the old town.

laundry day (I usually try to ask in hotels if I can borrow their washing machine): 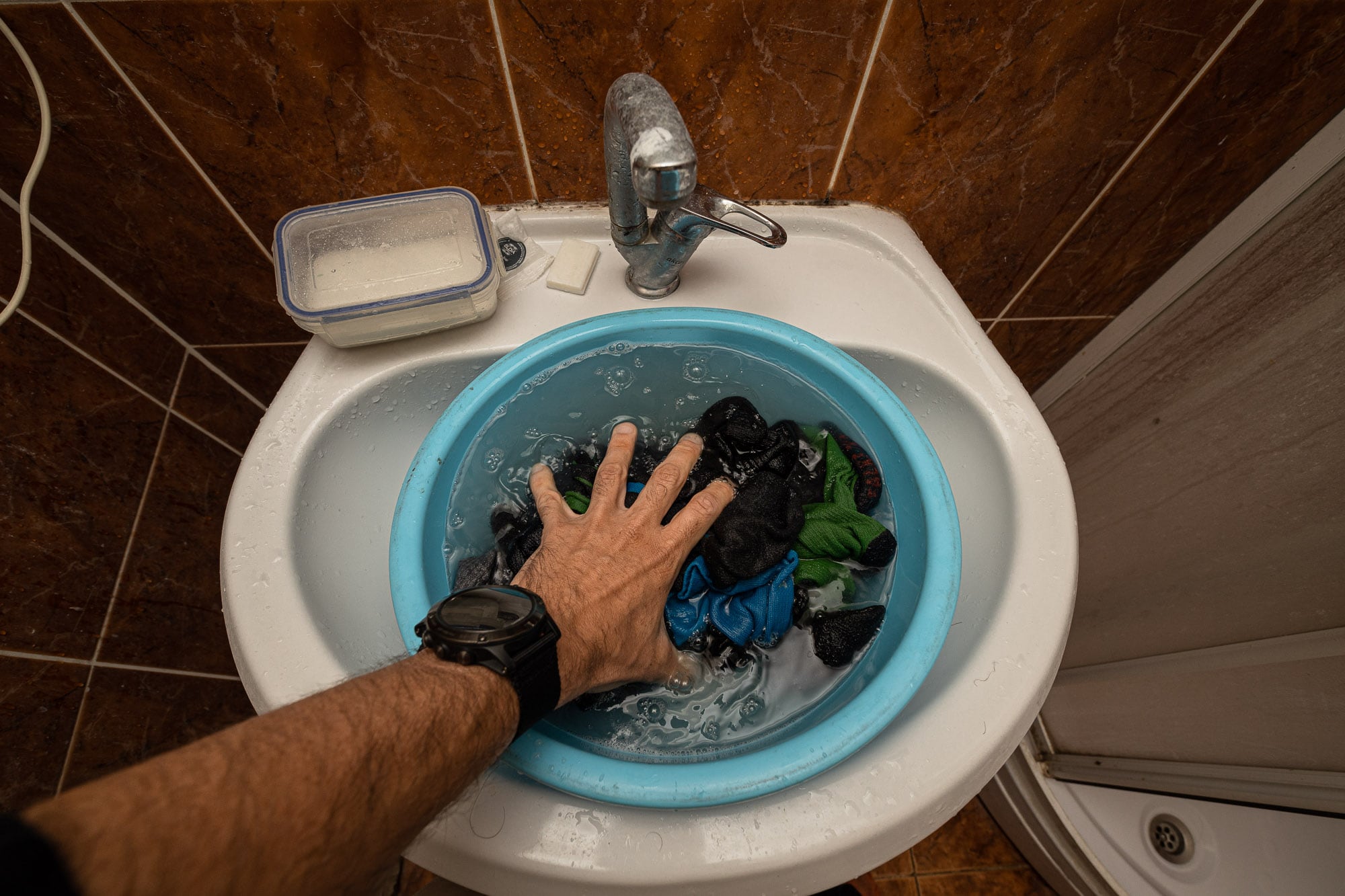 laundry in the hotel room: 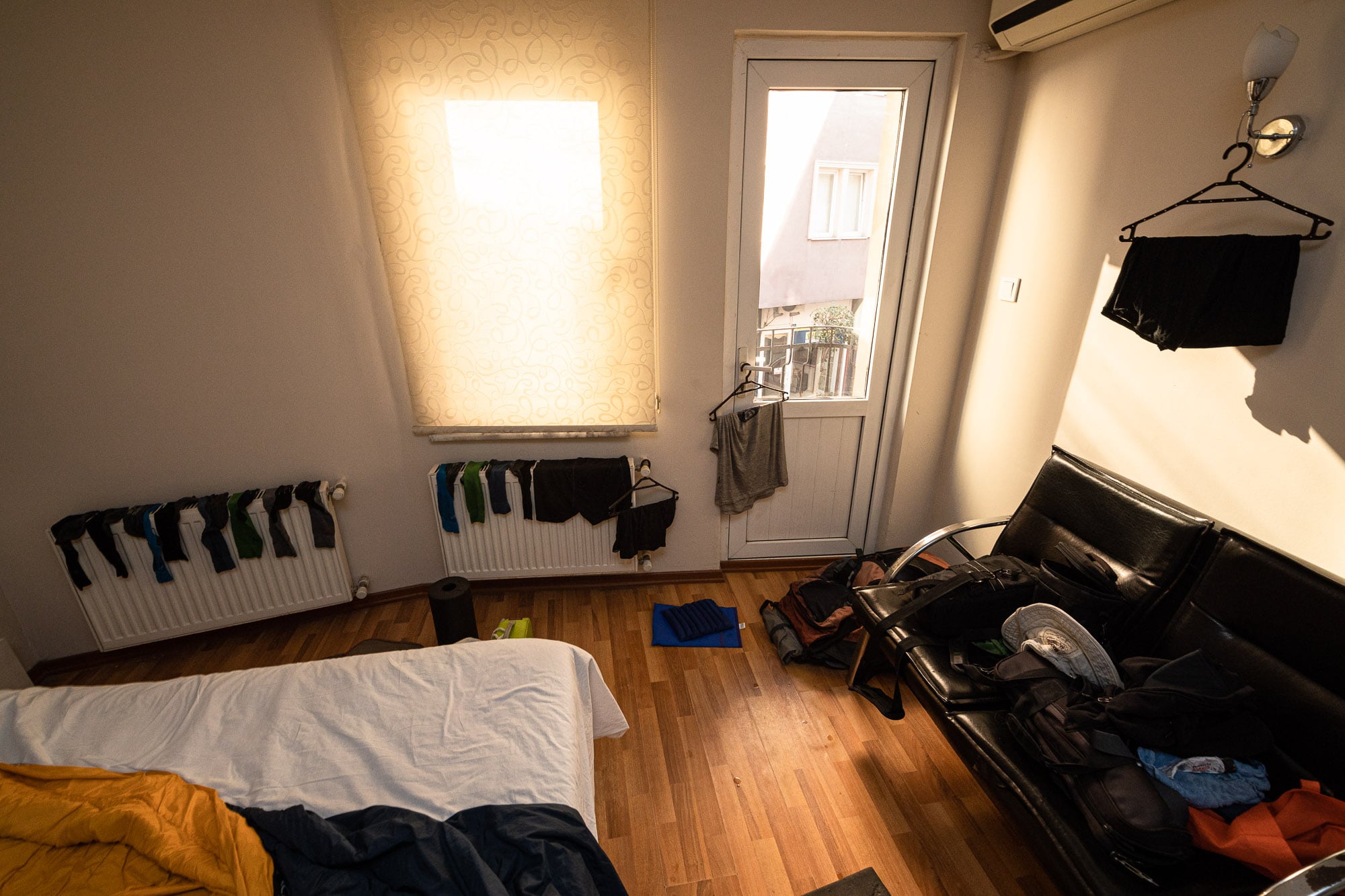 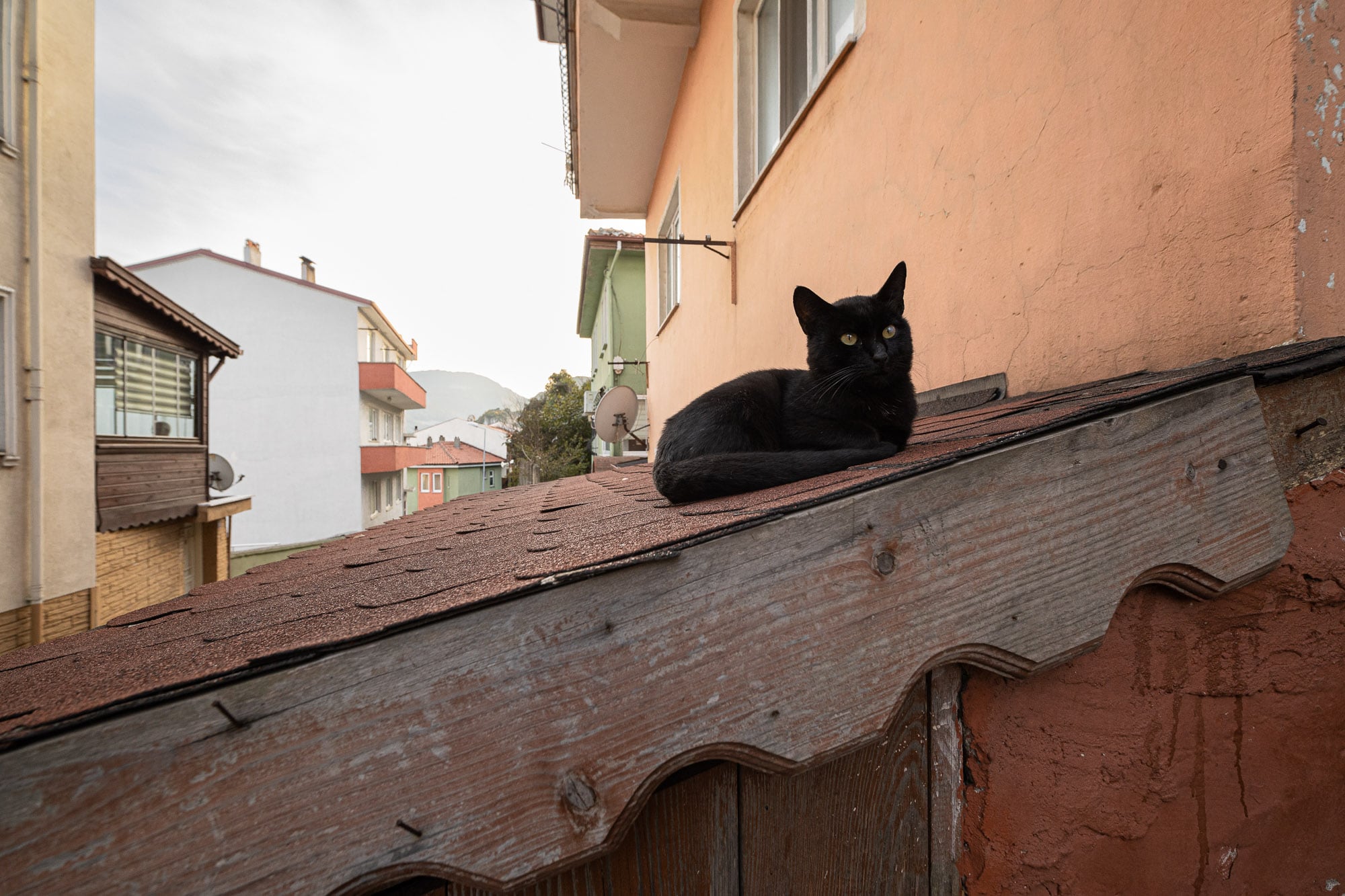 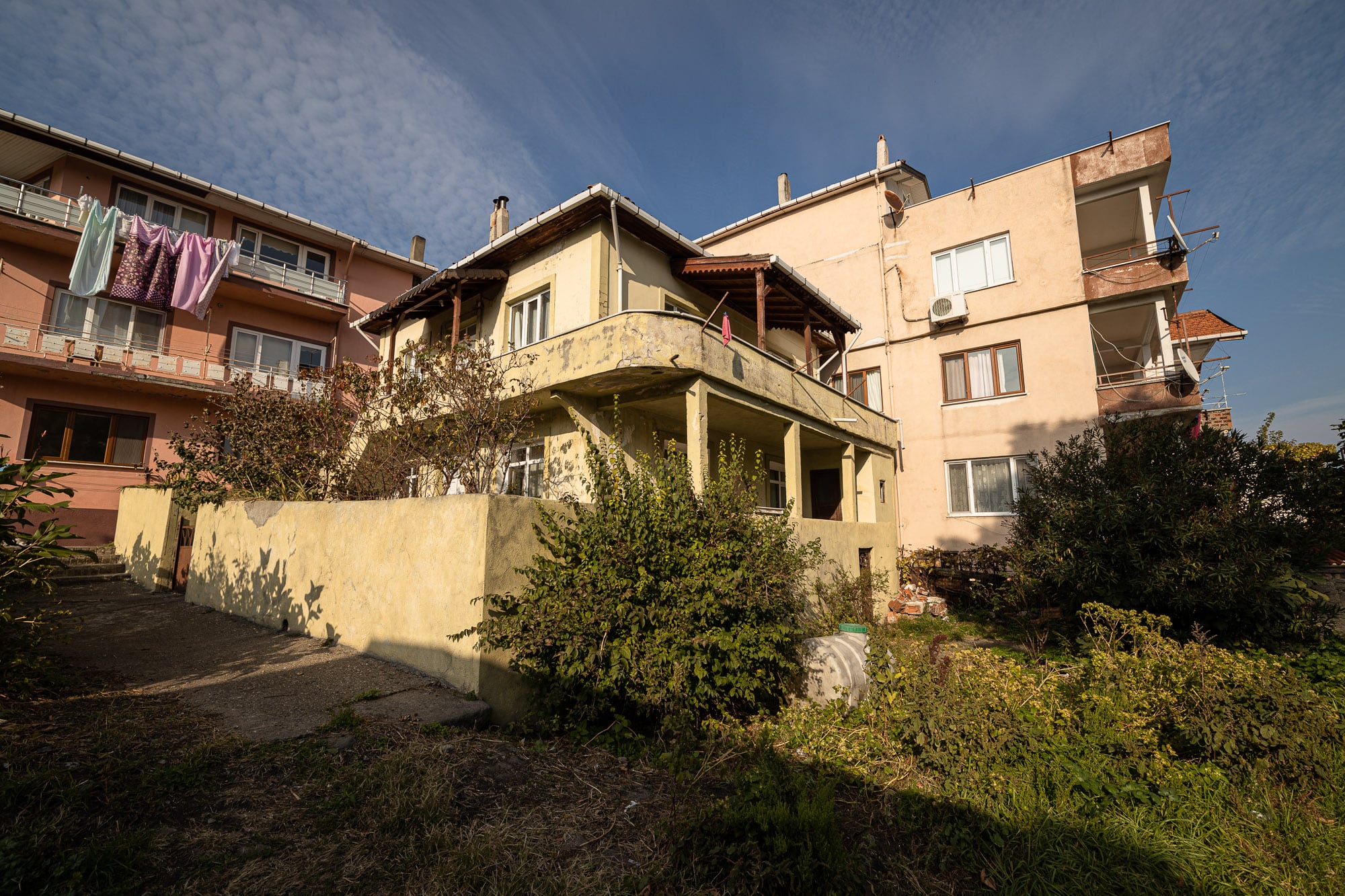 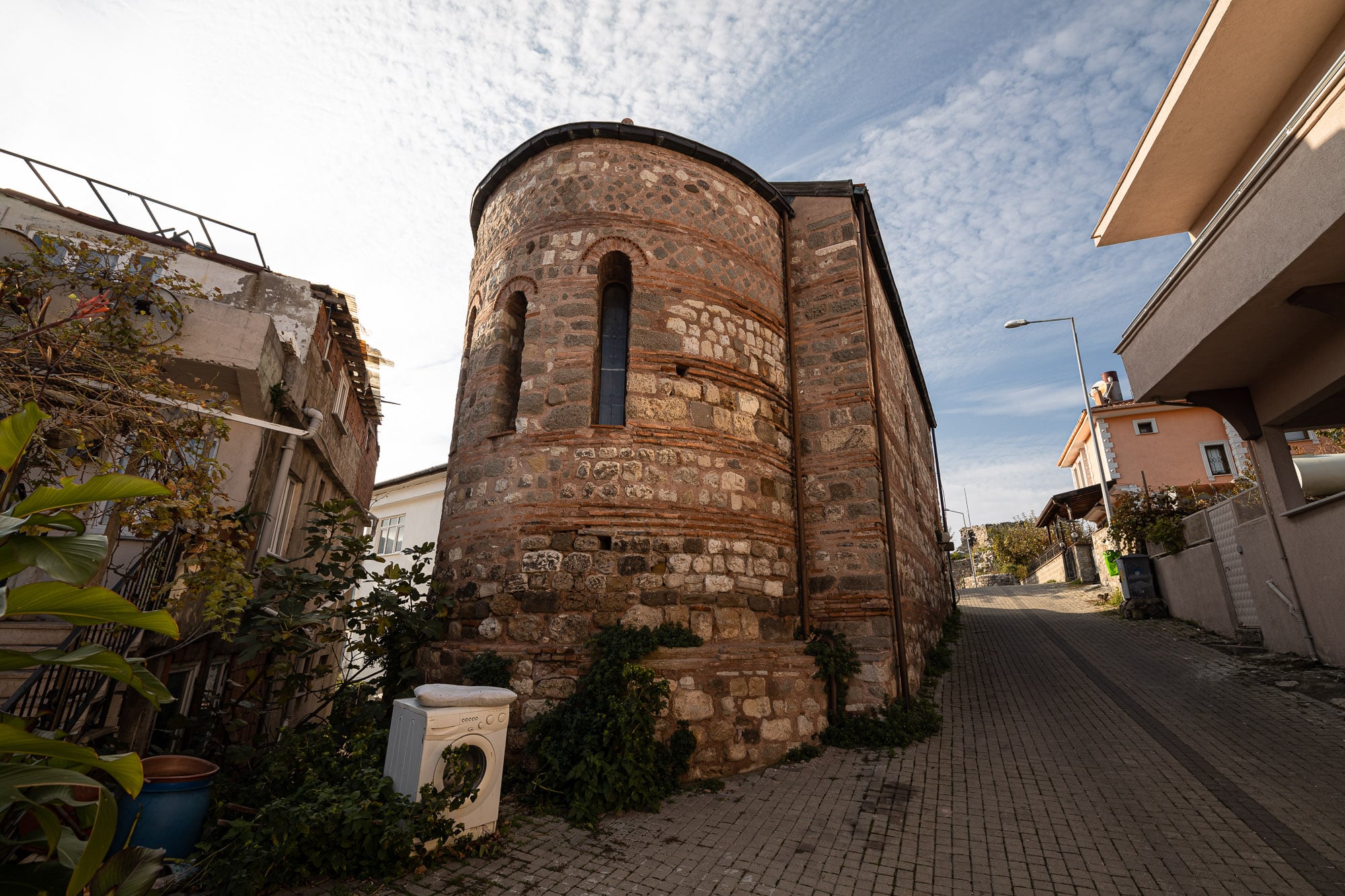 Entrance to the church: 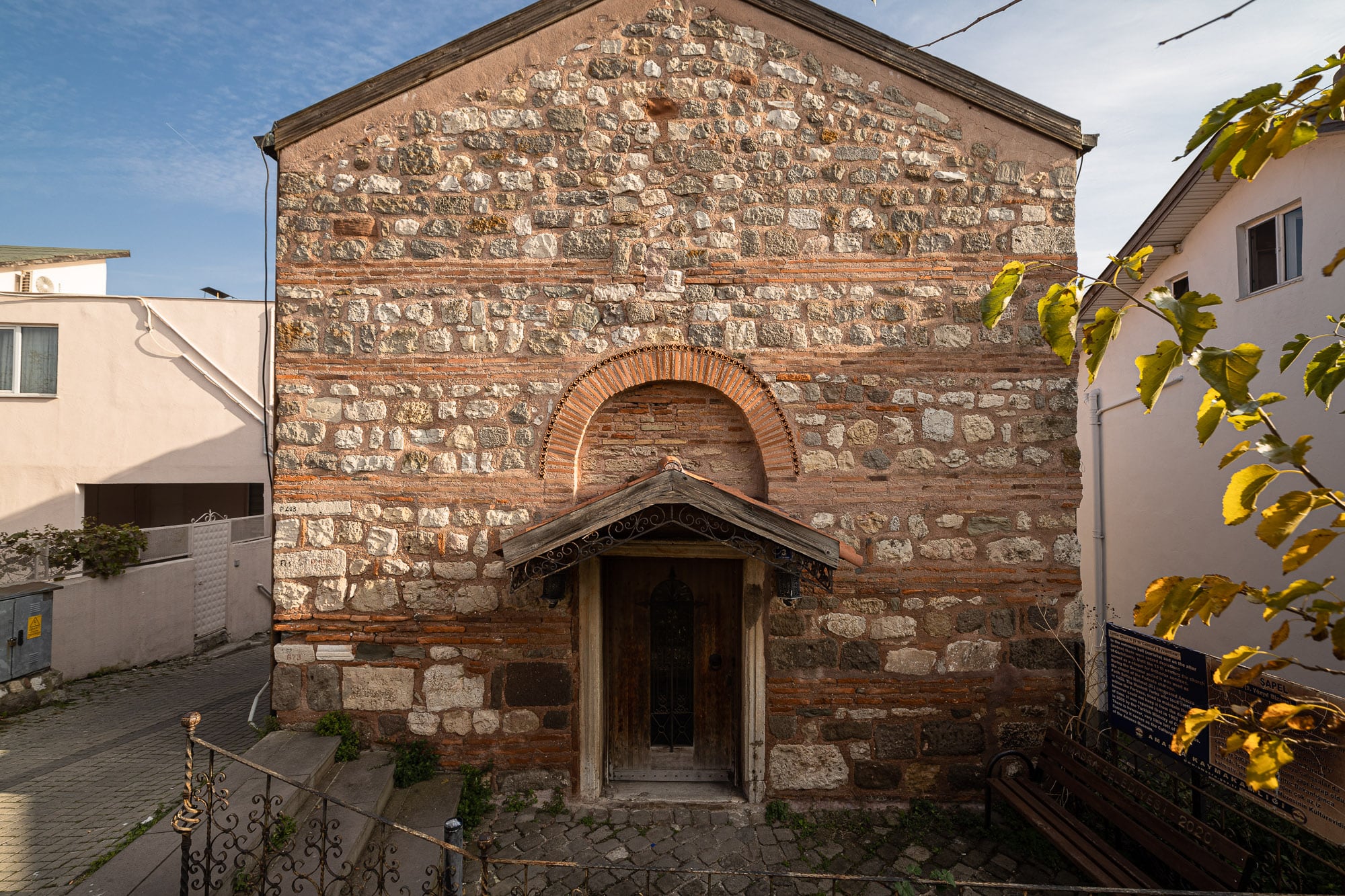 The renovation works were pretty extensive (you can look up old pictures from the 1990s to see what it was like before): 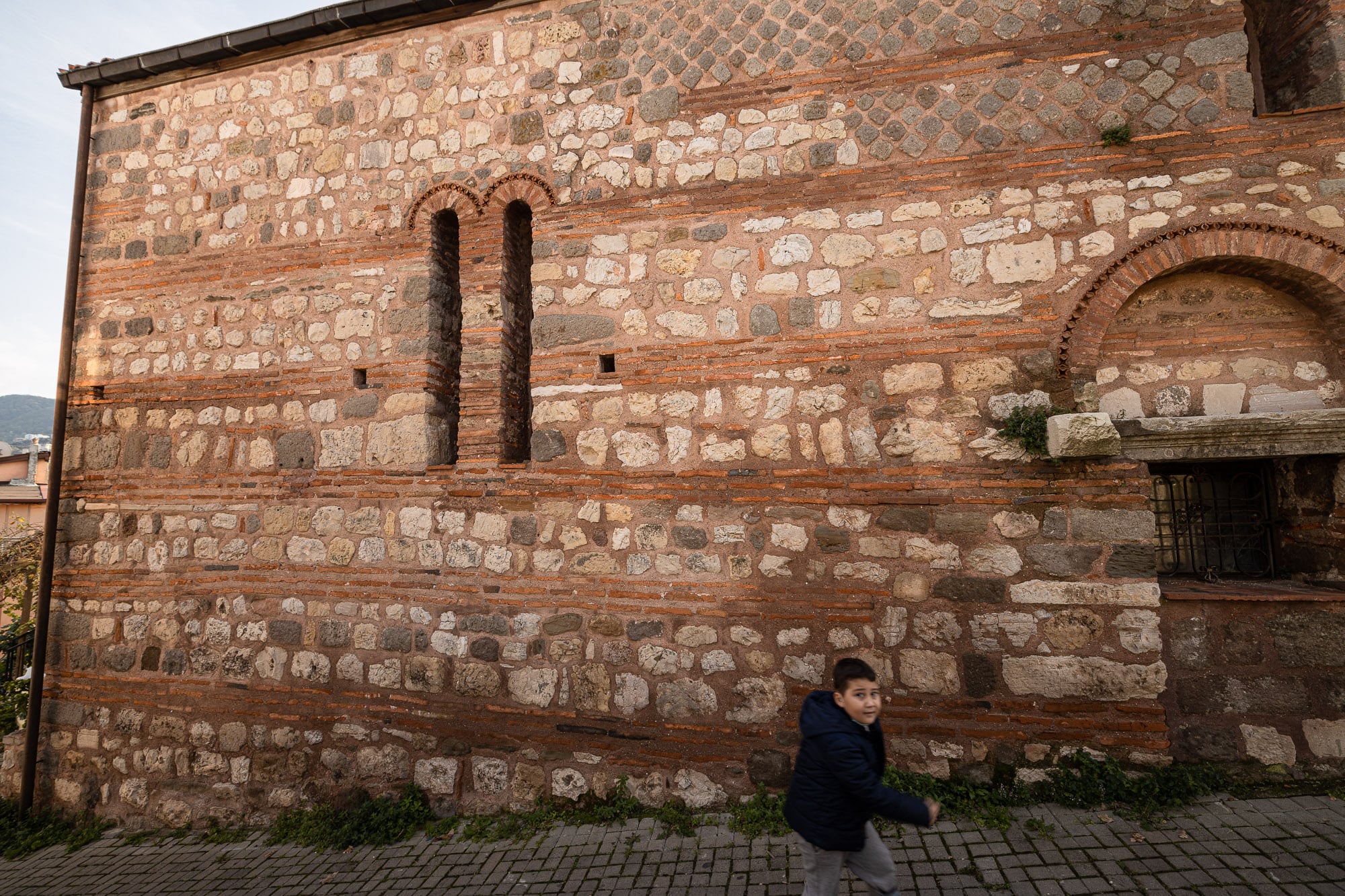 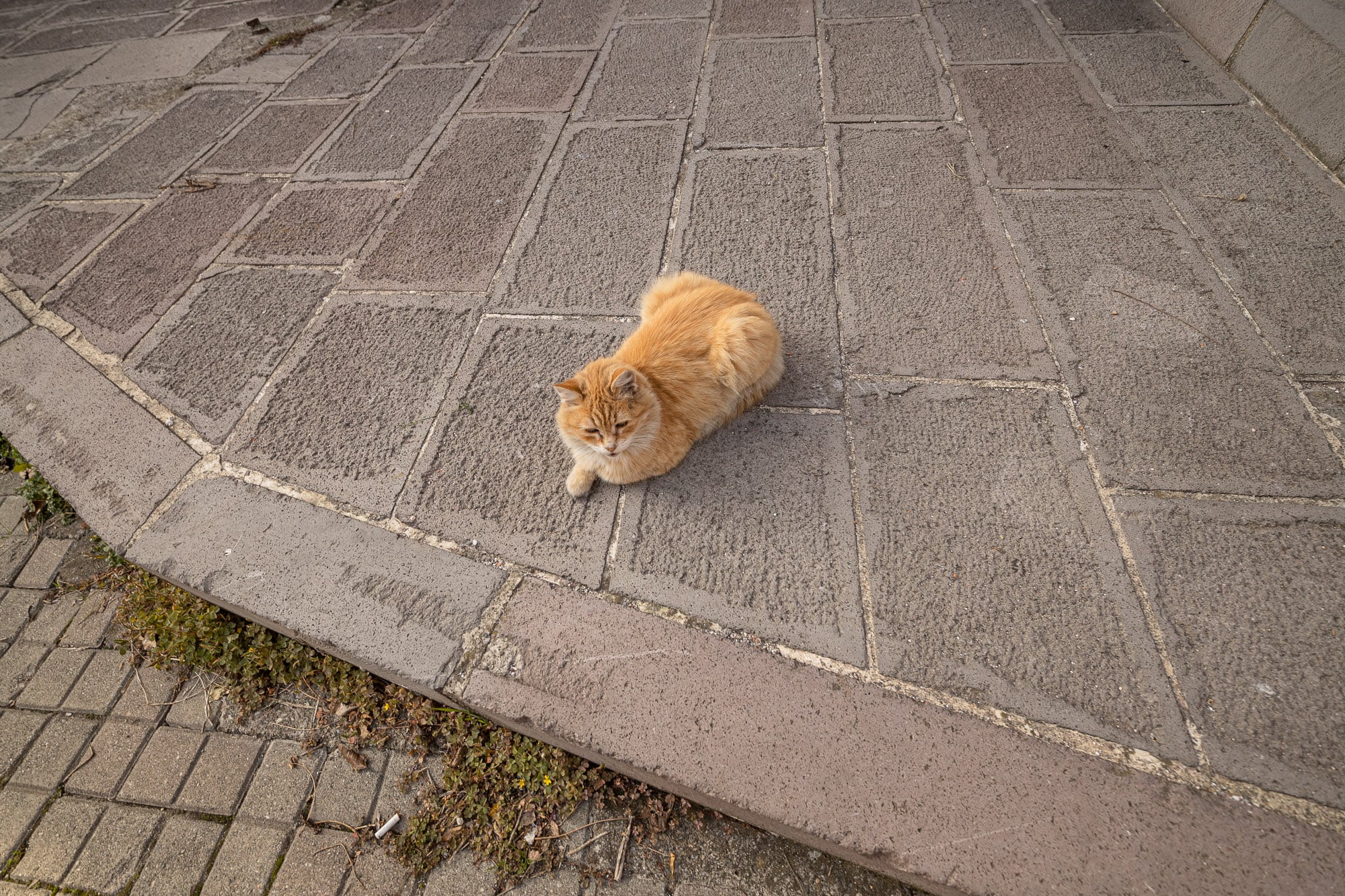 The bridge connecting the island to the old town: 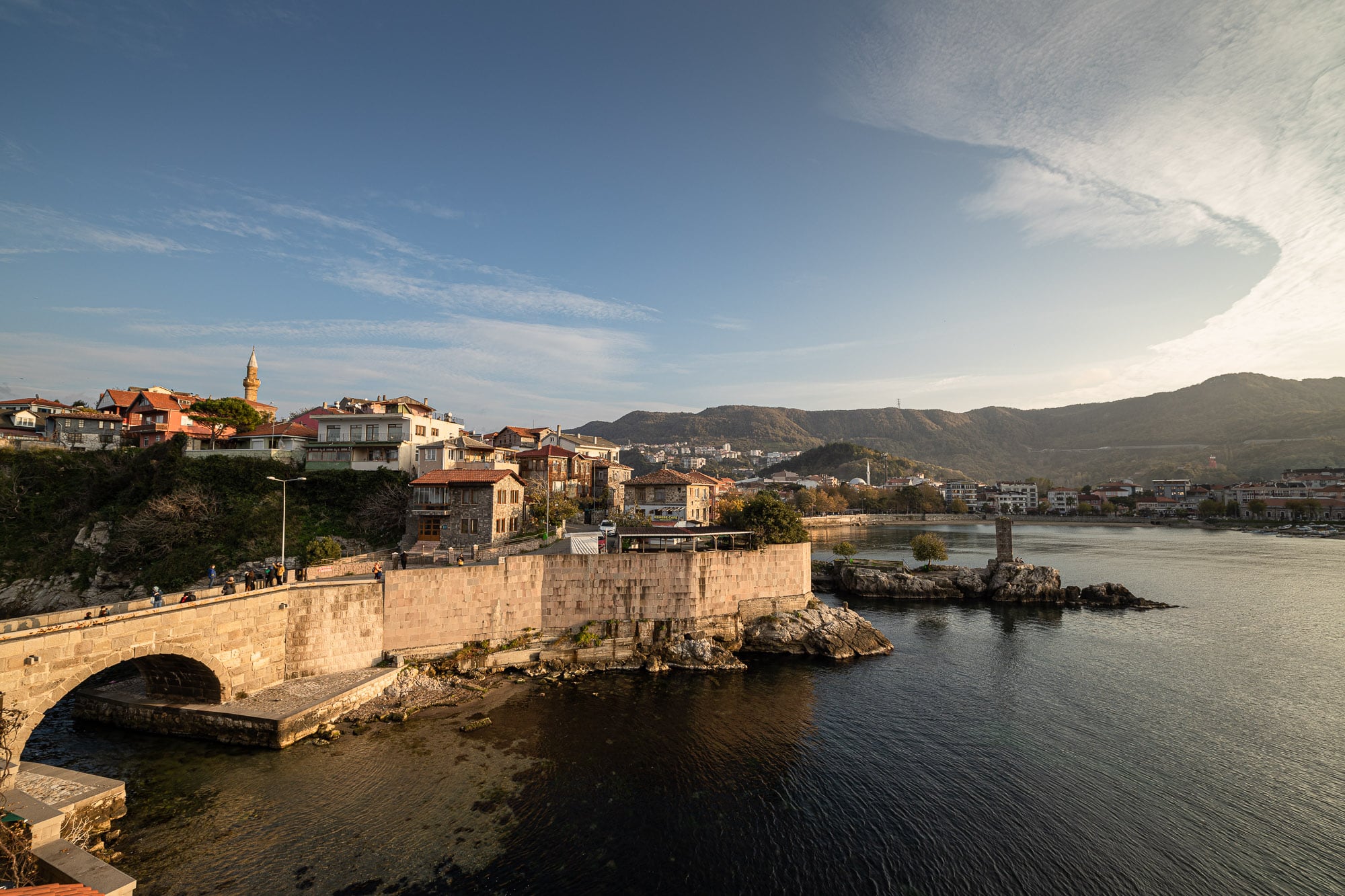 The quarry of Amasra 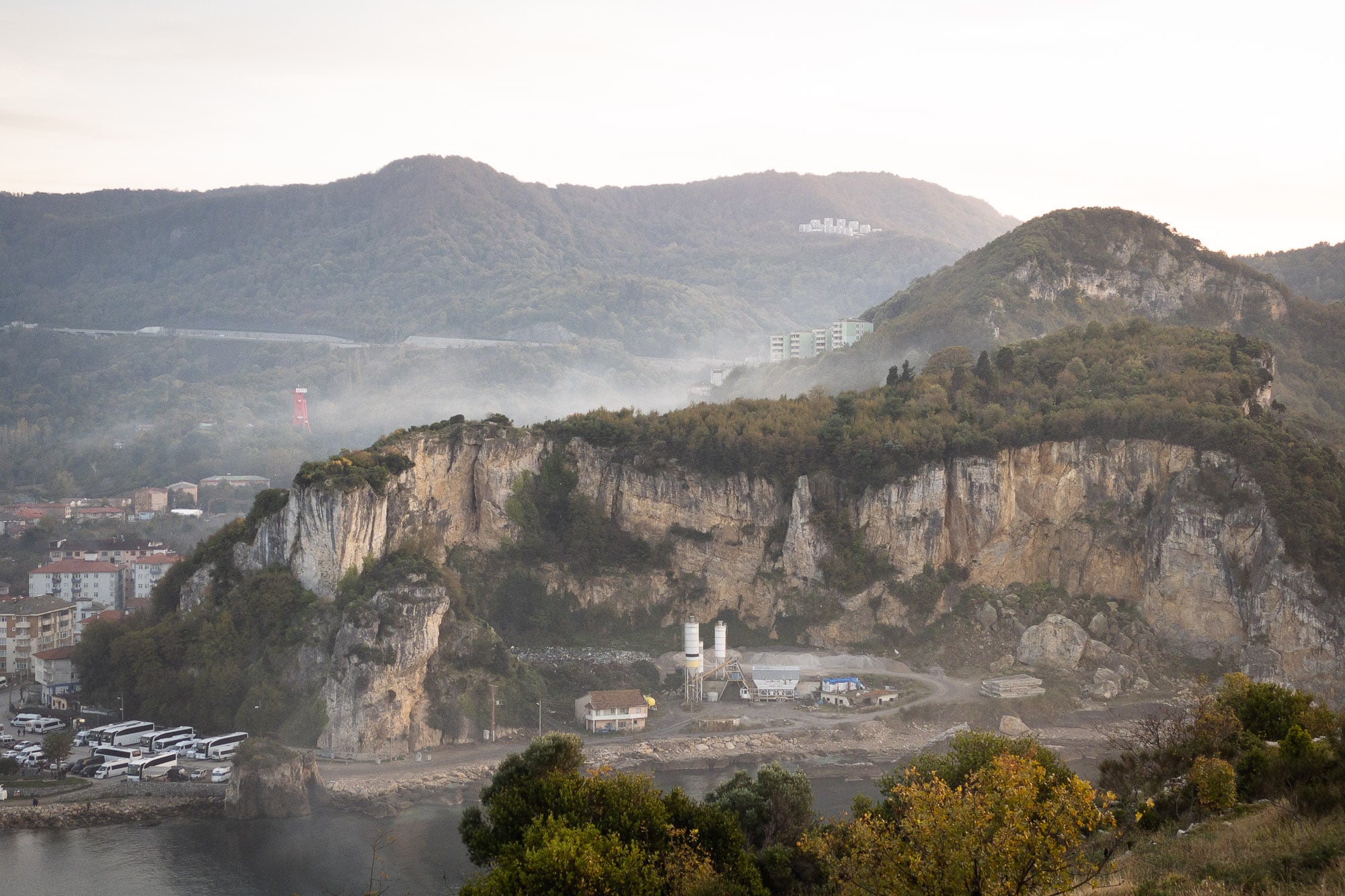 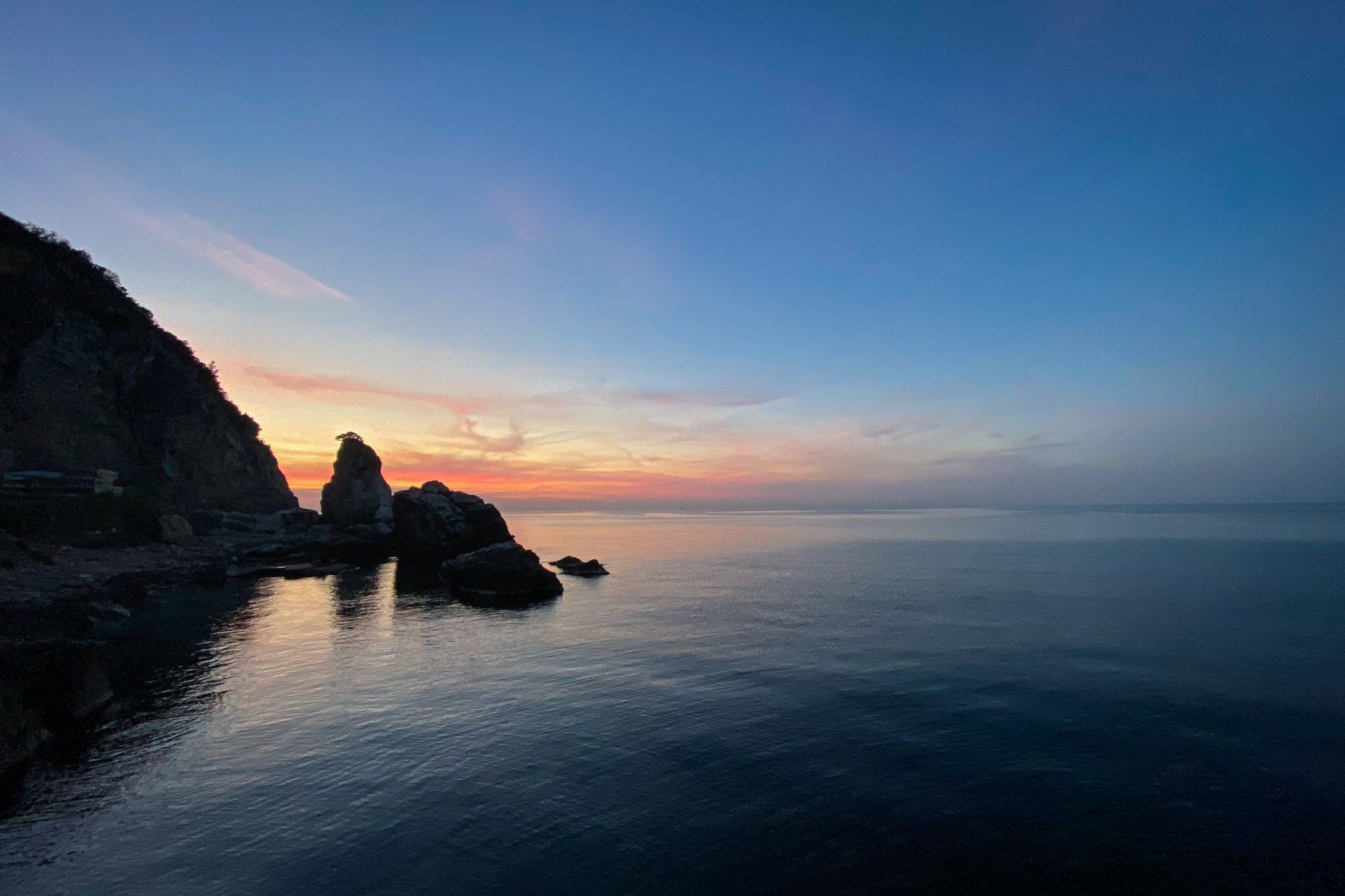