When I left in the morning the sky was overcast: 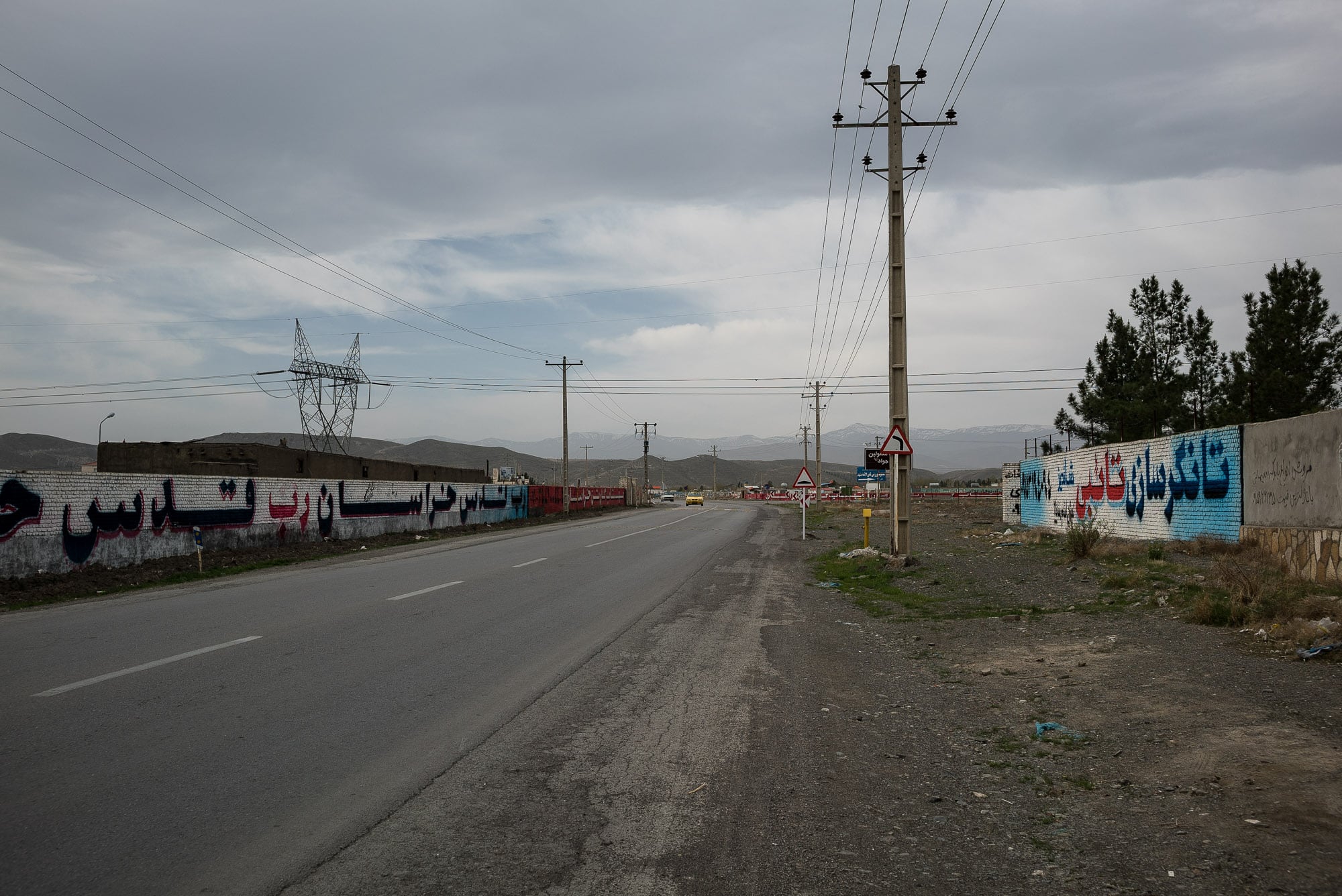 I liked overcast, because it meant that it wouldn’t be that hot. The road led me past painted walls most of the time. Some of them were quite colorful: 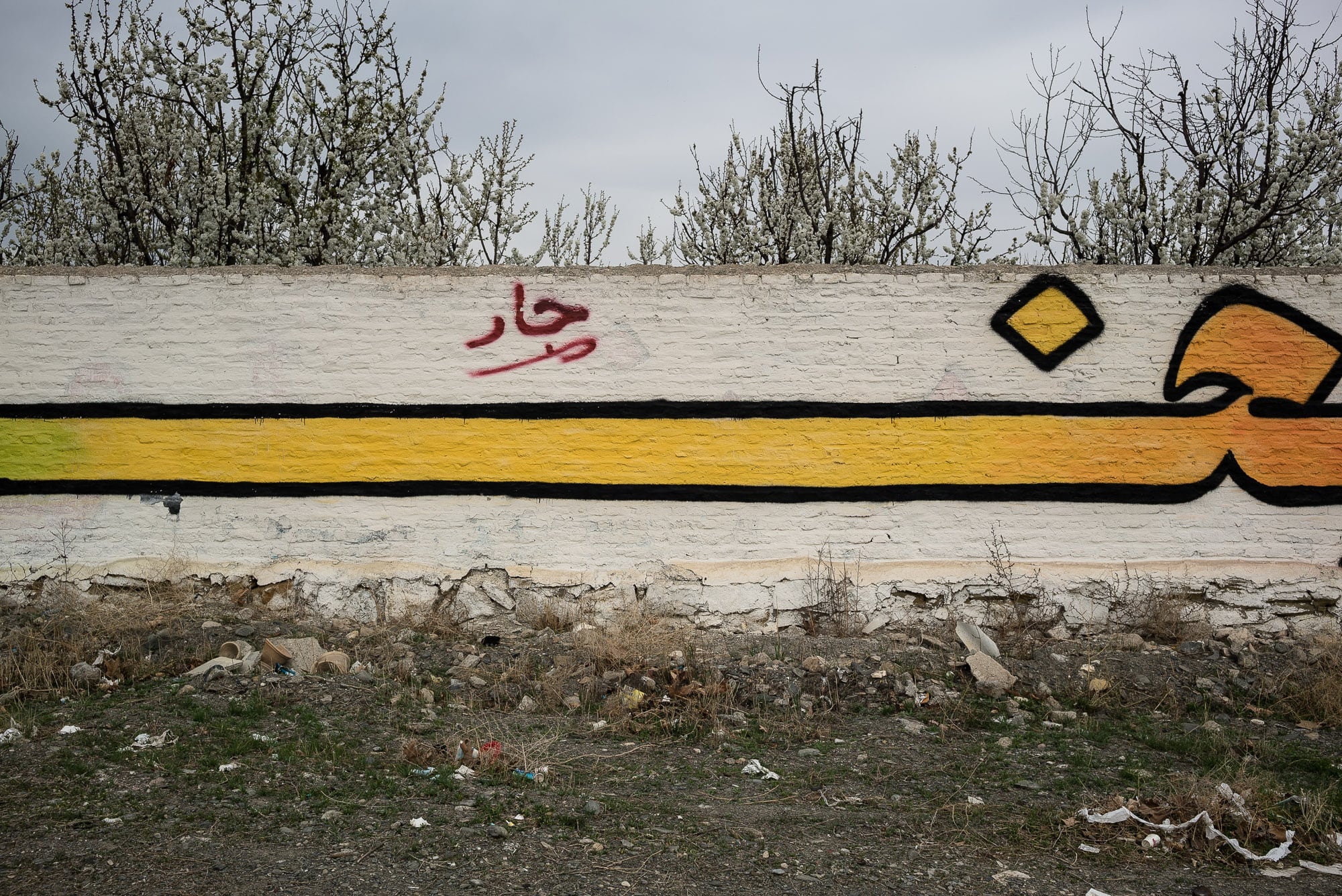 There was a place apparently advertising sheep’s head for breakfast: 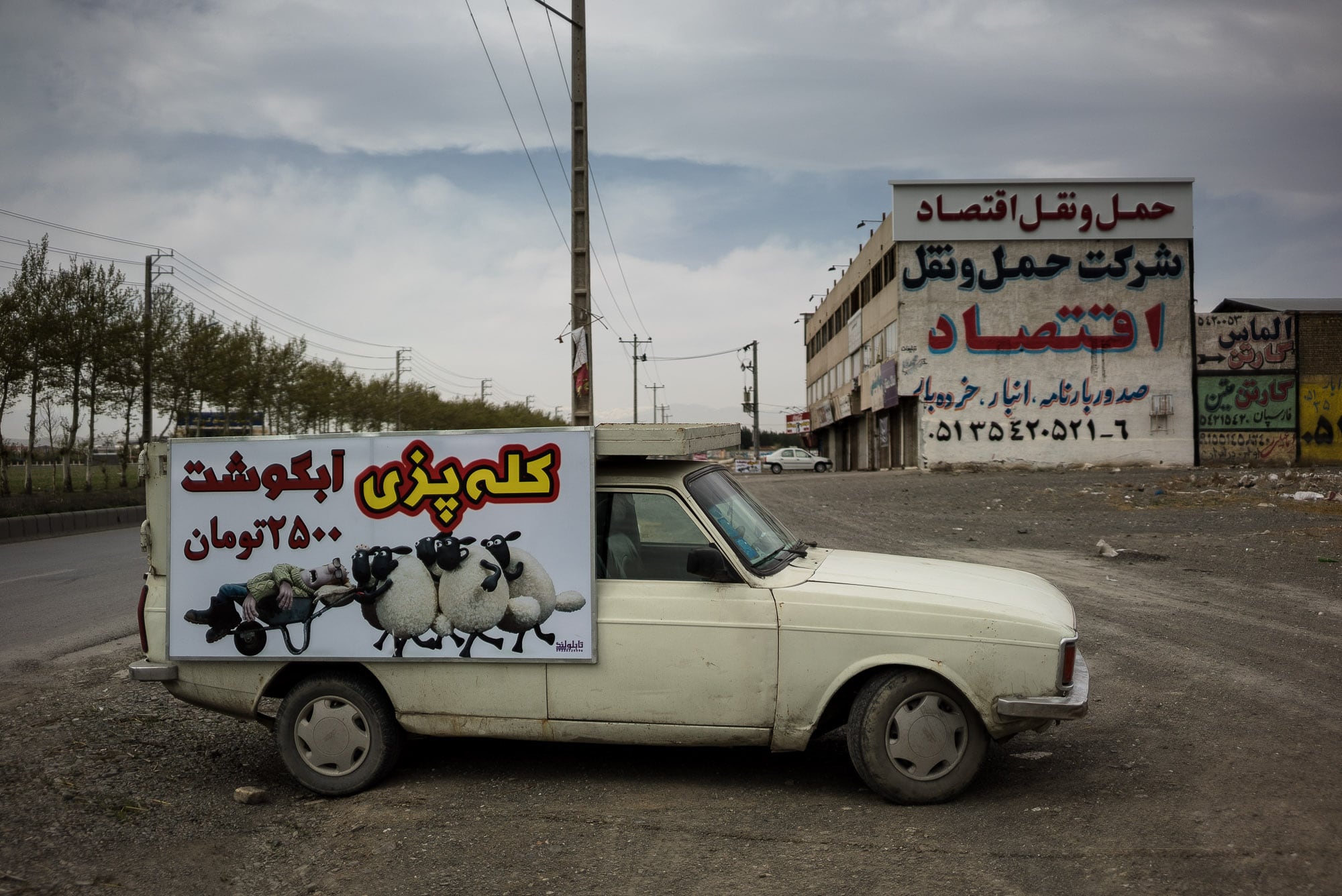 I passed. Instead, I went to this little shop and bought some water and some cookies: 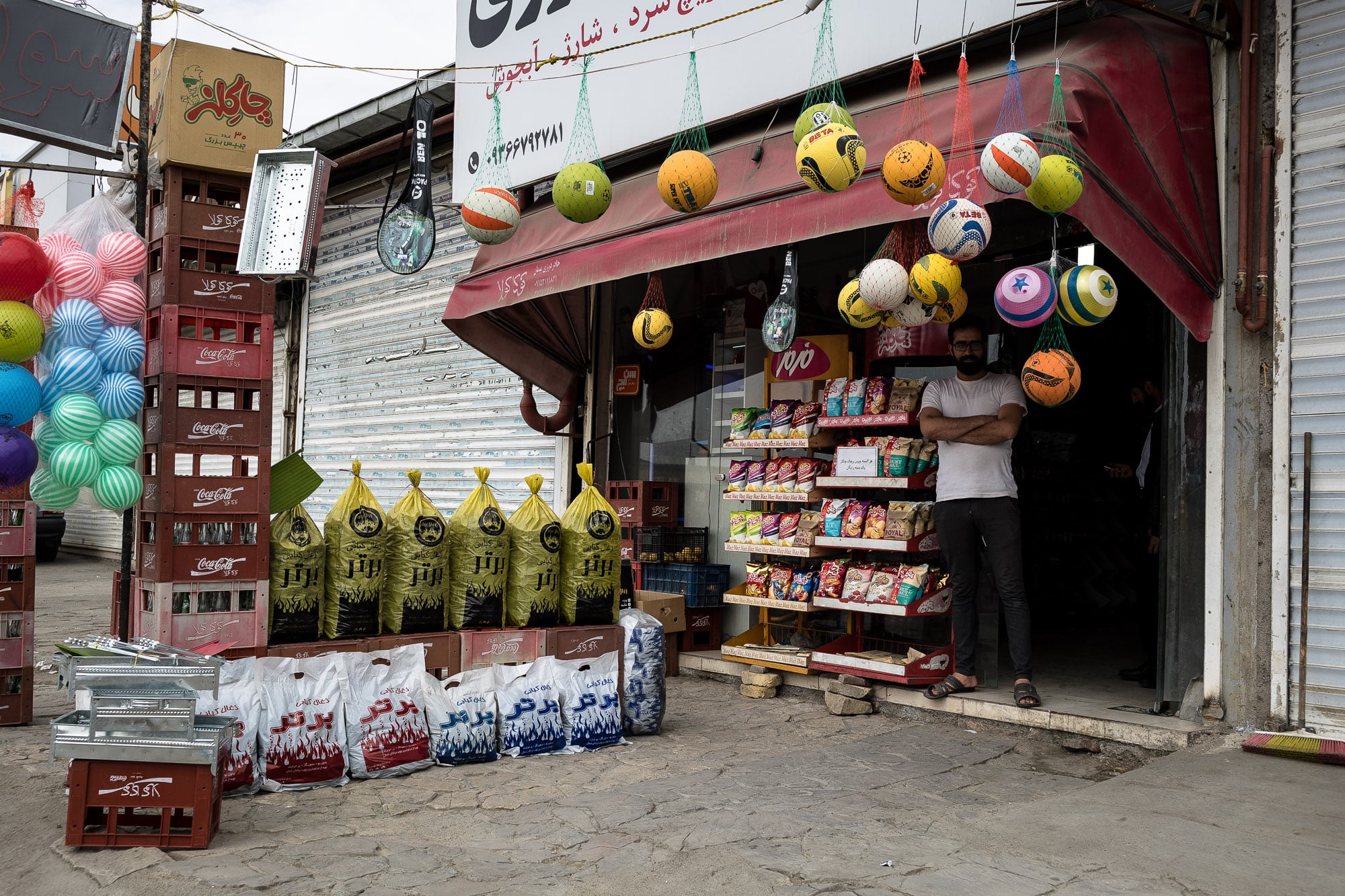 Roadside shops in Iran always seemed to have a bunch of inflatable balls hanging in front of them. Maybe it had become code for “shop”.

I left the main road after a while and started looking for the old road, which was supposed to be further north. Saw a crying boy in front of a blue wall and snapped a pic, in a sort of half-assed attempt to cheer him up. But he kept crying: 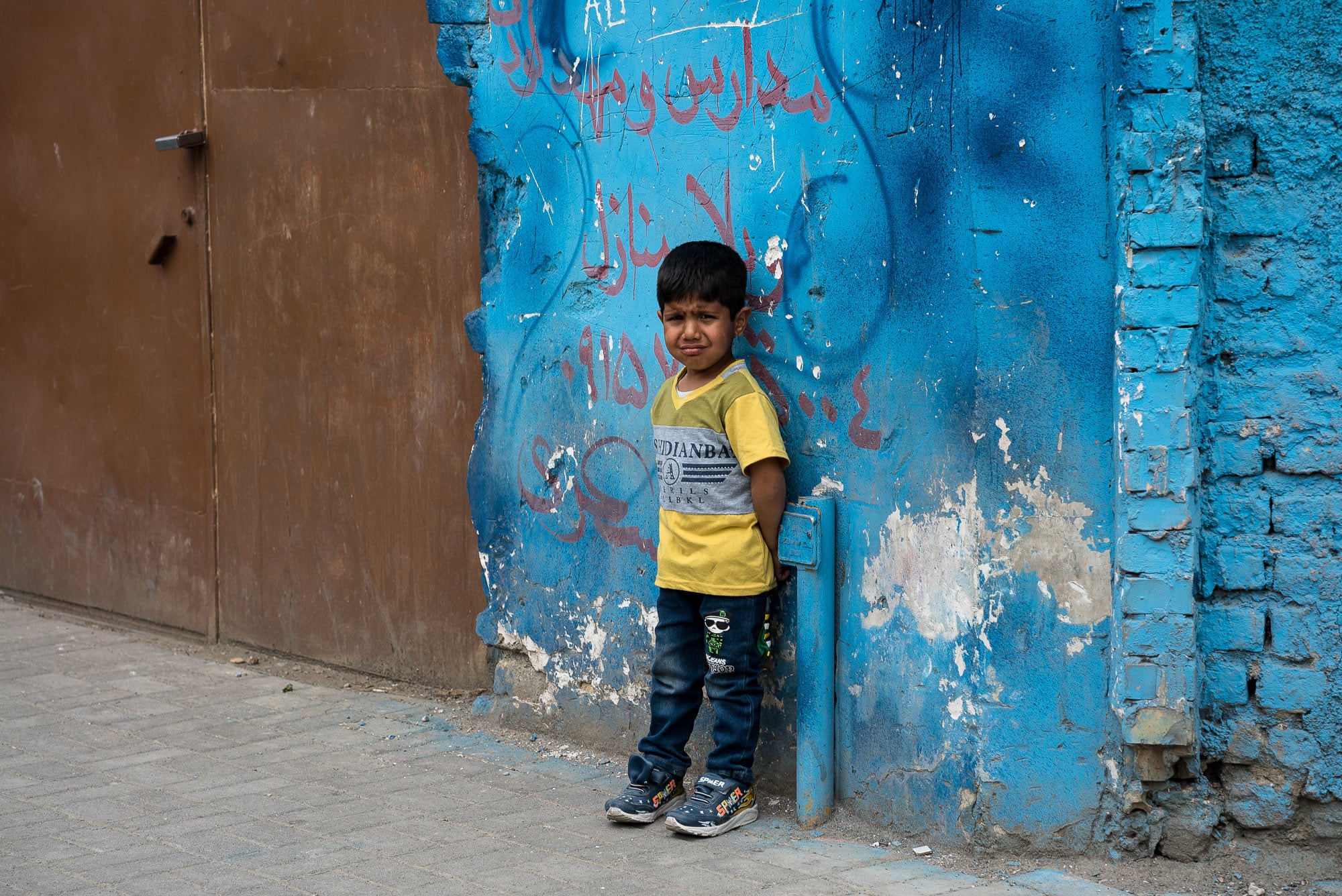 The blue wall wasn’t the only colorful thing in the village. There were nice murals on some of the other walls: 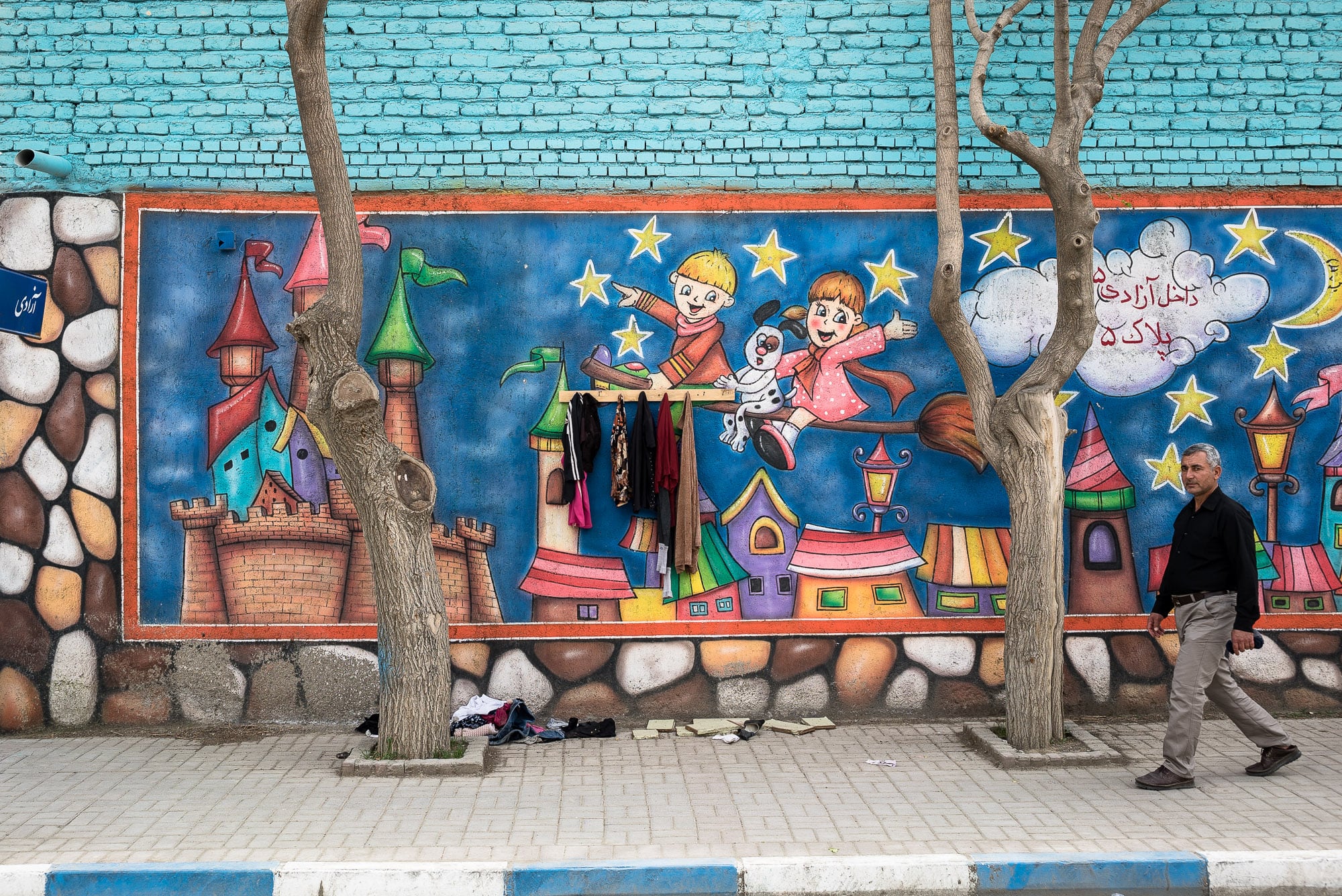 Then a young man appeared and said hello. His English was pretty good, and he told me not to take the old road. It was dangerous there, he said, because there were so many Afghans. I figured that Afghans were probably just as nice as anyone else. Also, other Iranians had told me that Afghans were very trustworthy. So I insisted on taking the old road.

But first I had lunch: 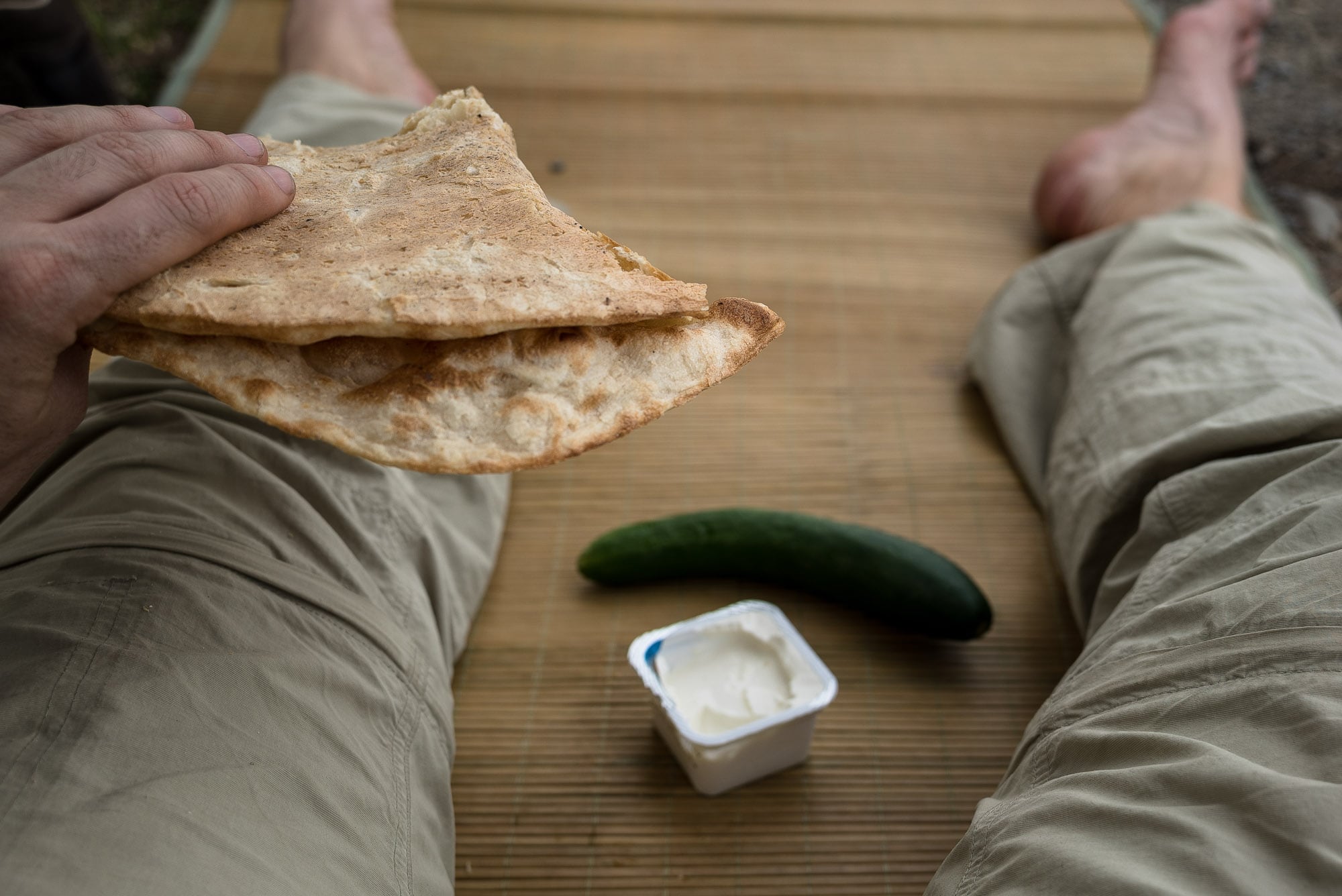 Some dudes appeared on motorcycles, and they were very friendly: 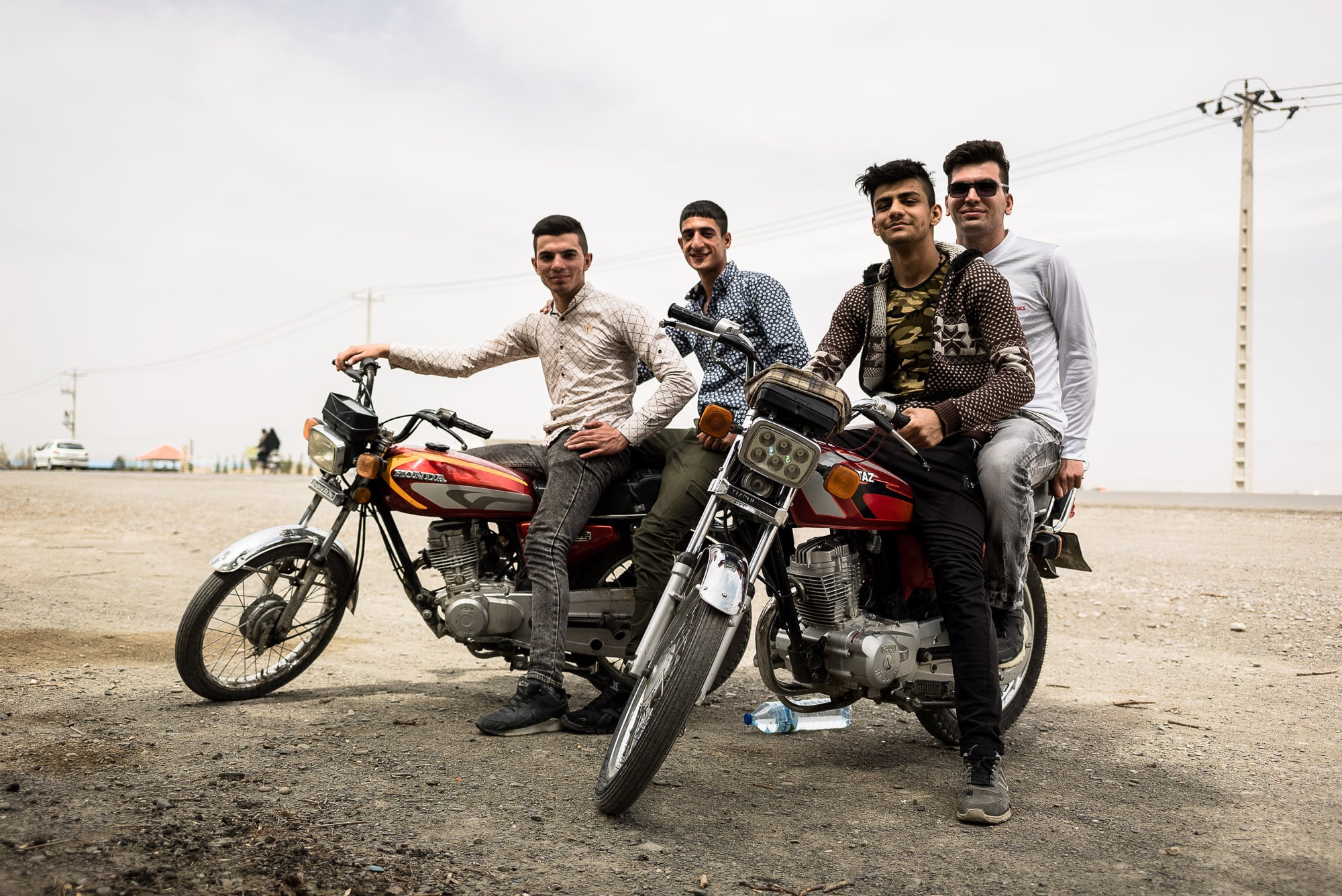 As I walked along the old road, I realized that I actually had no way of knowing if someone was an Afghan or not. I could point at people and say: “Irani?” or “Afghani?” But that was about it. It reminded me of a day ten years earlier when I had been looking for some invisible Russians somewhere in China.

Anyway, the villages here looked pretty Iranian to me: 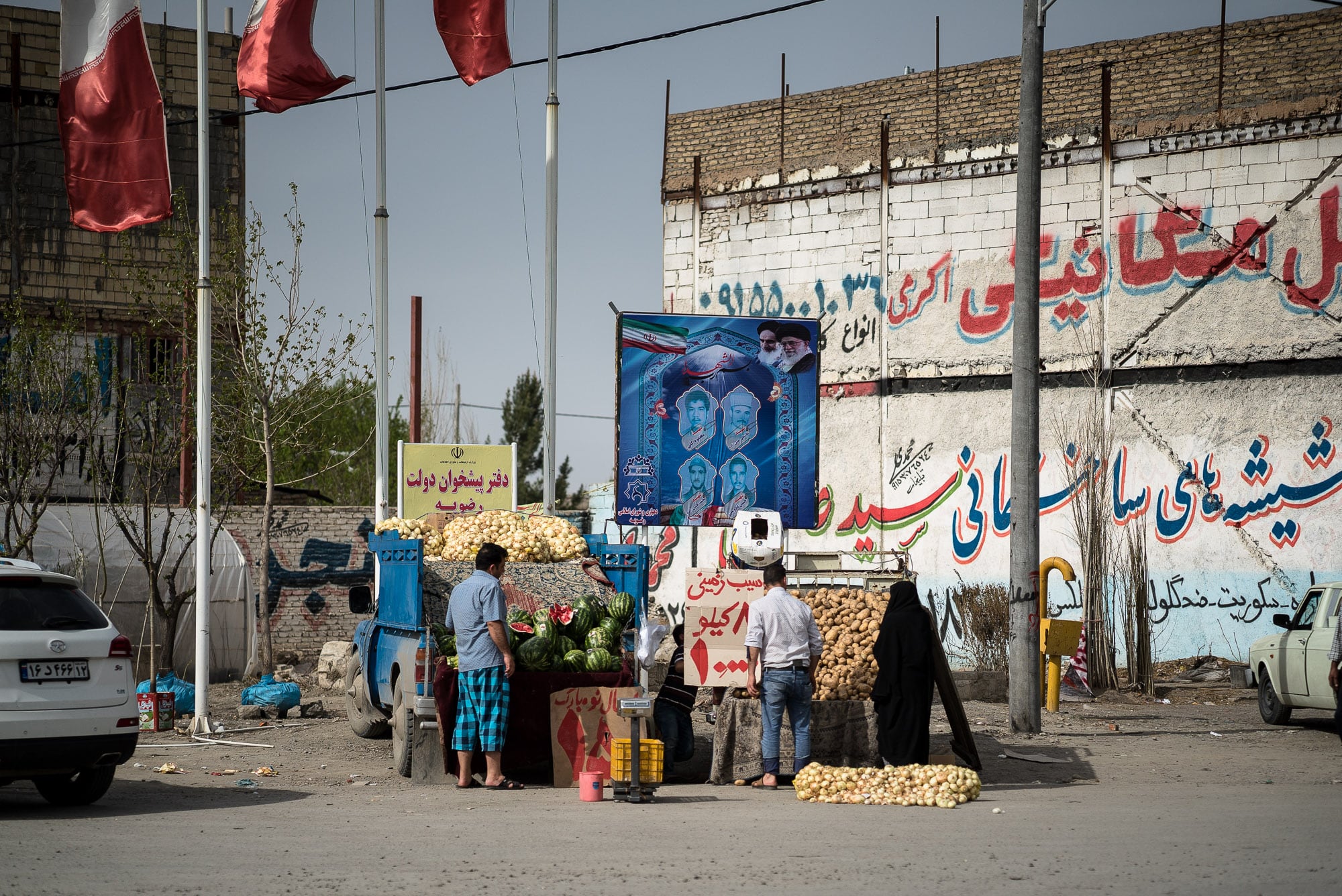 When I arrived in the little village of Khan Saadat, I decided to ask for a place to sleep in the mosque. And Vaheed, a young gentleman with a sharp haircut, helped me get set up in a corner of the prayer hall: 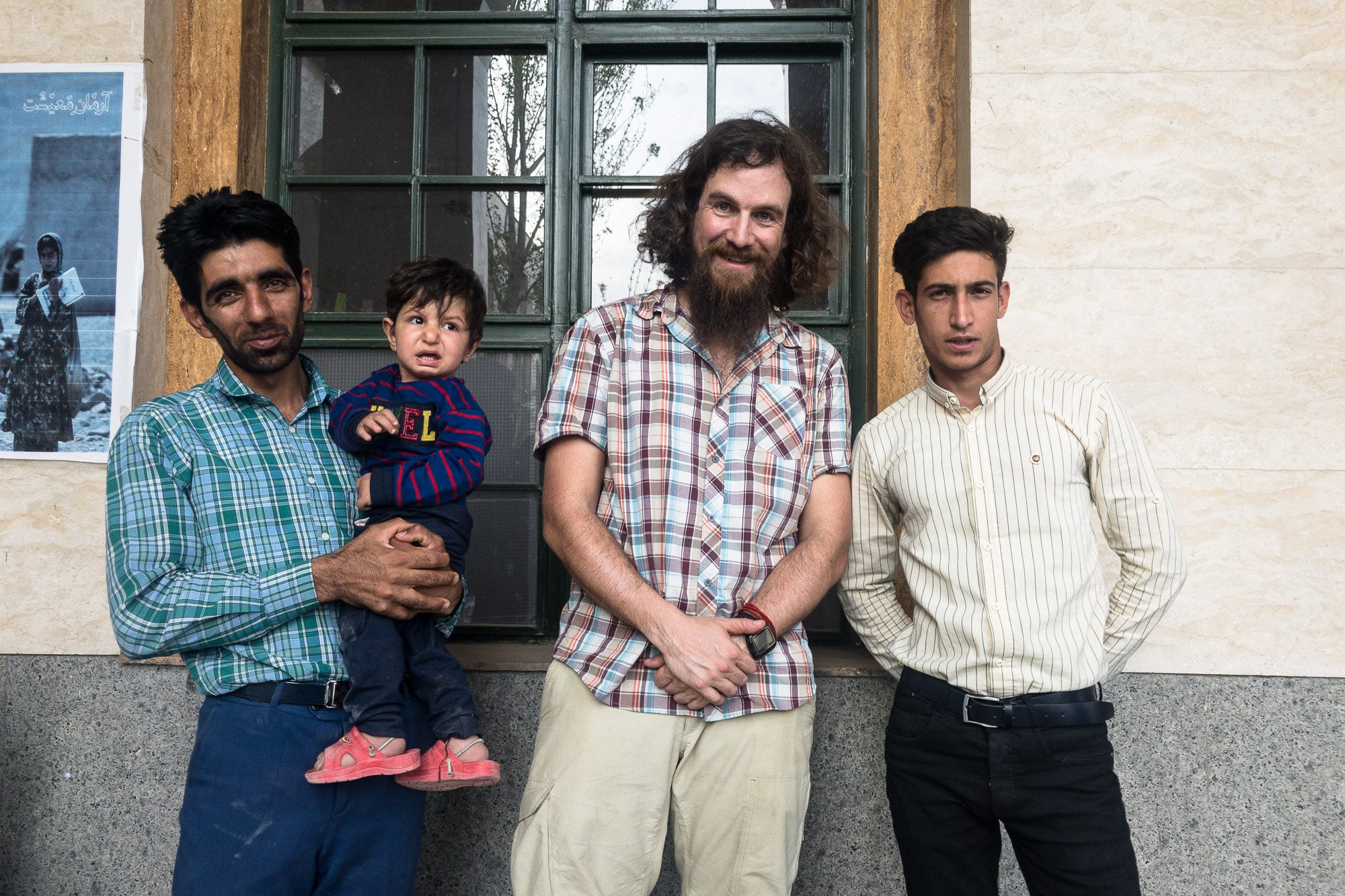 See the baby’s face? He was terrified of me. It was because of the beard, his dad told me. Okay, I said, bearded wanderer in a land of beards.

The other kids liked me a lot better, though: 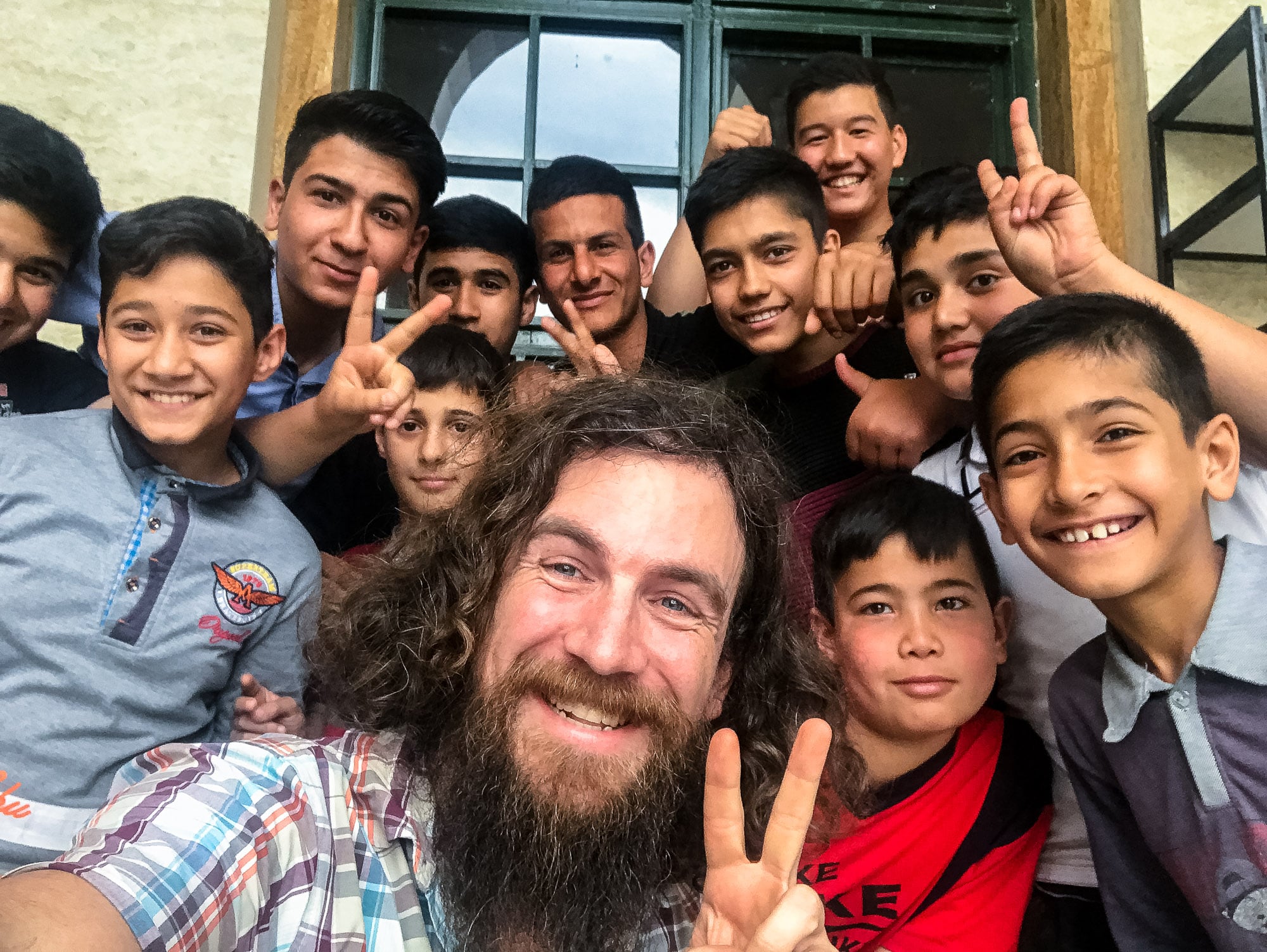 We hung out talking for two or three hours. Well, when I say “talking”, I mean mostly individual words (often shouted), gestures, and facial expressions.

I slept very well that night: 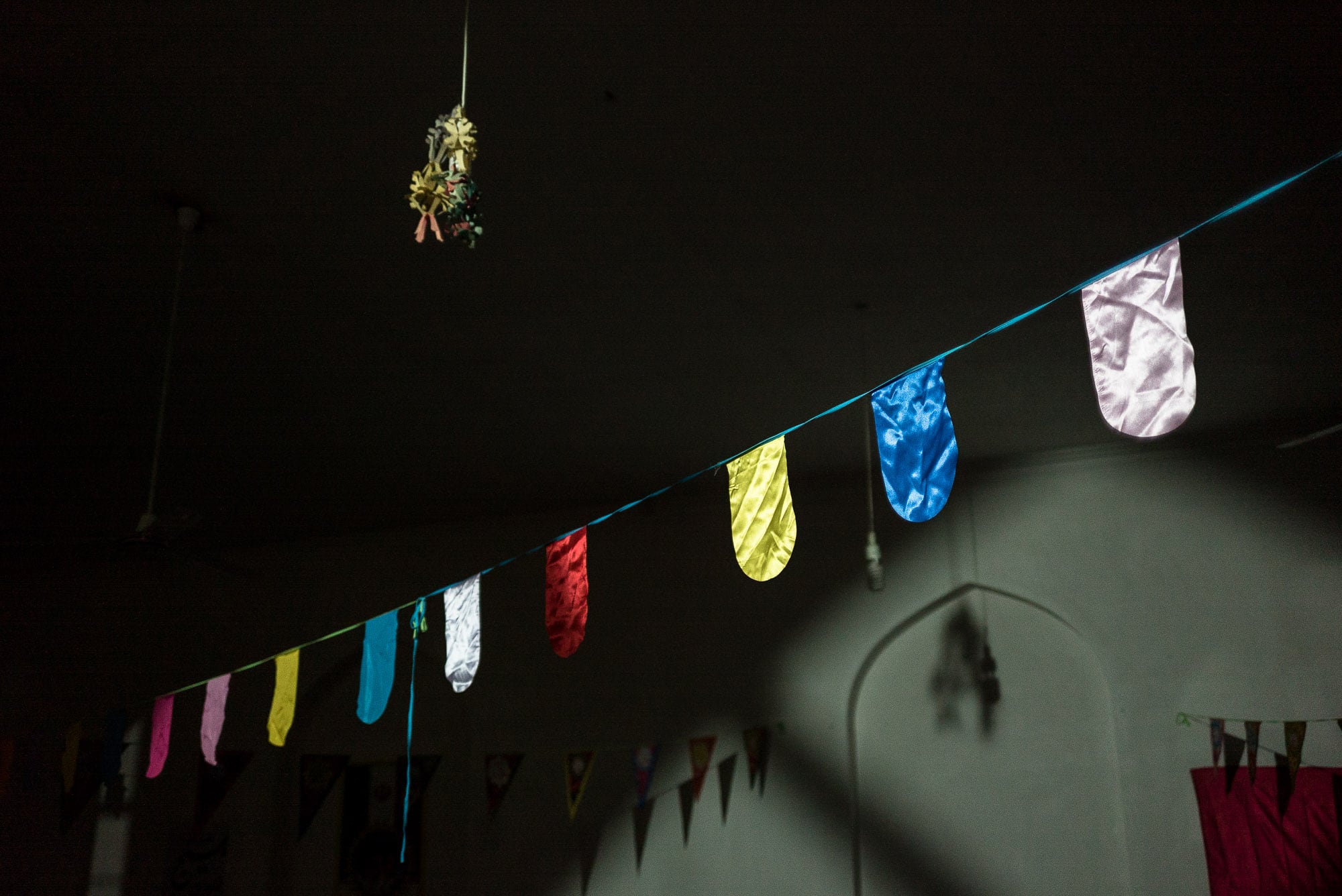 In the darkness of the mosque.

Video of the day:

360 degree video from the old road:

I have recently started to like the 360 degree thingie.