When we got up, we packed the Caboose and took her outside, upon which we immediately set her down again… 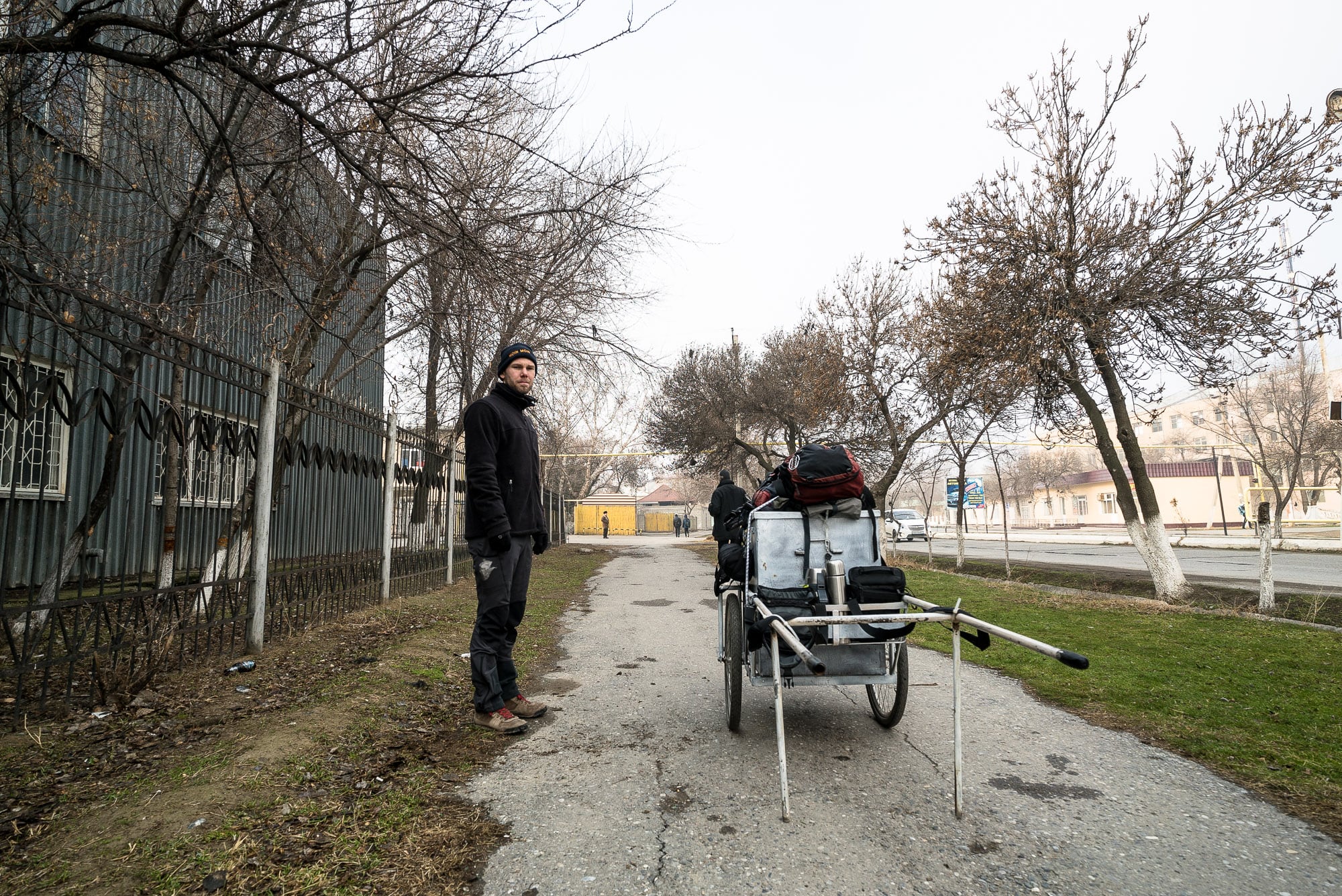 …for this was our place to dance:

We had come up with a plan to dedicate this historical 7000km dance to heroes of our childhood. I guess it’s not up to us to decided whether we failed or not.

Then we walked through the back streets of Yangiyer: 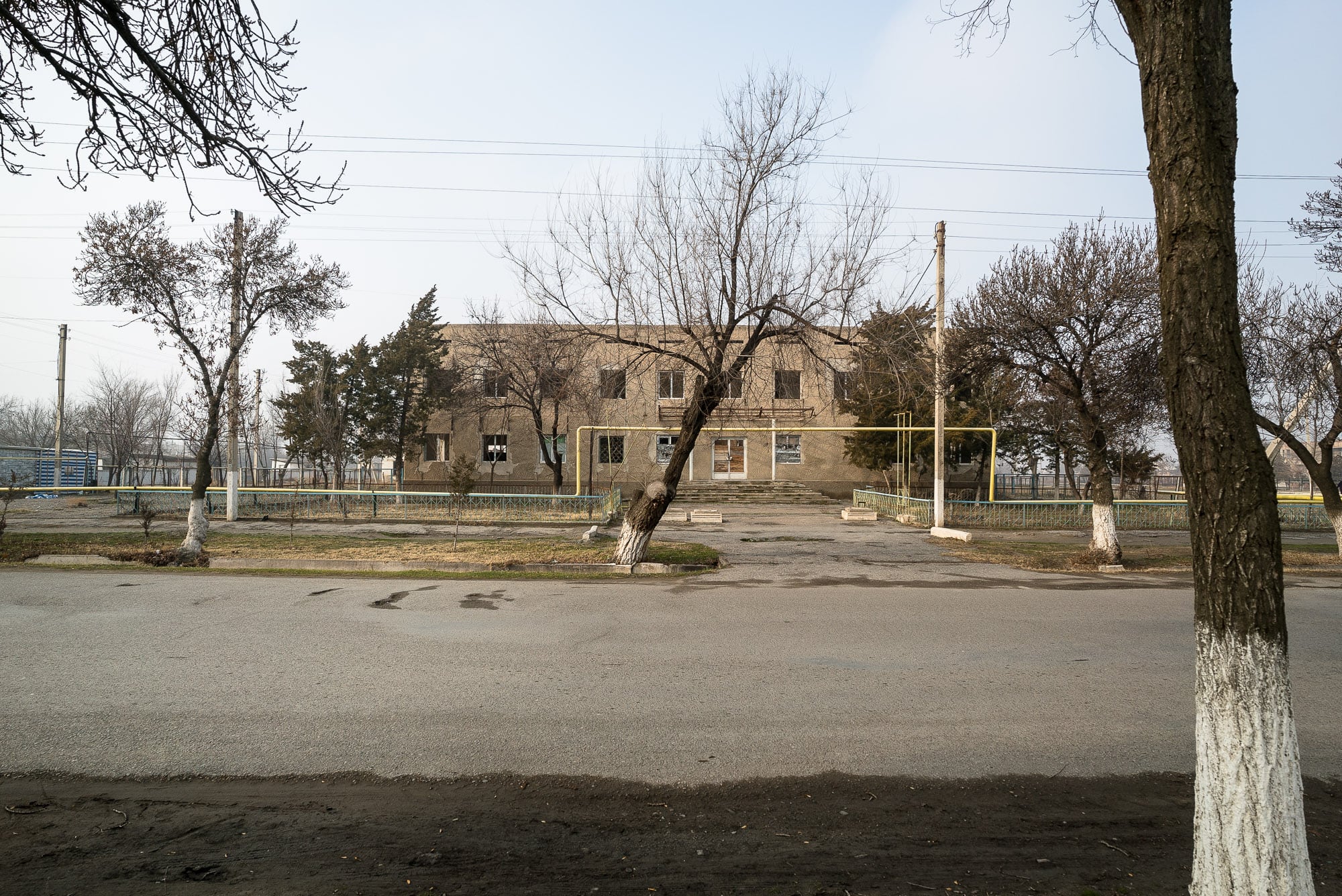 They were very quiet: 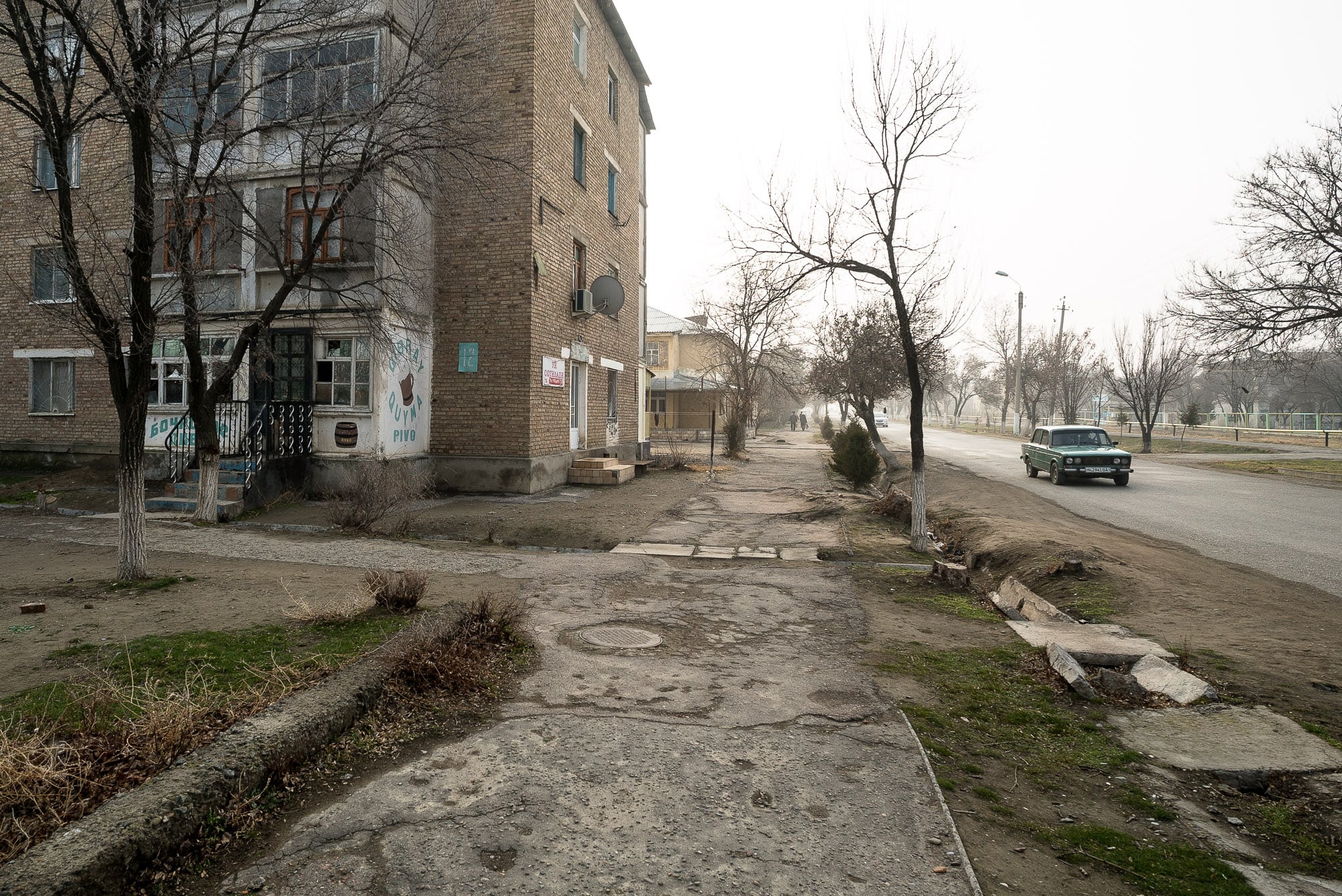 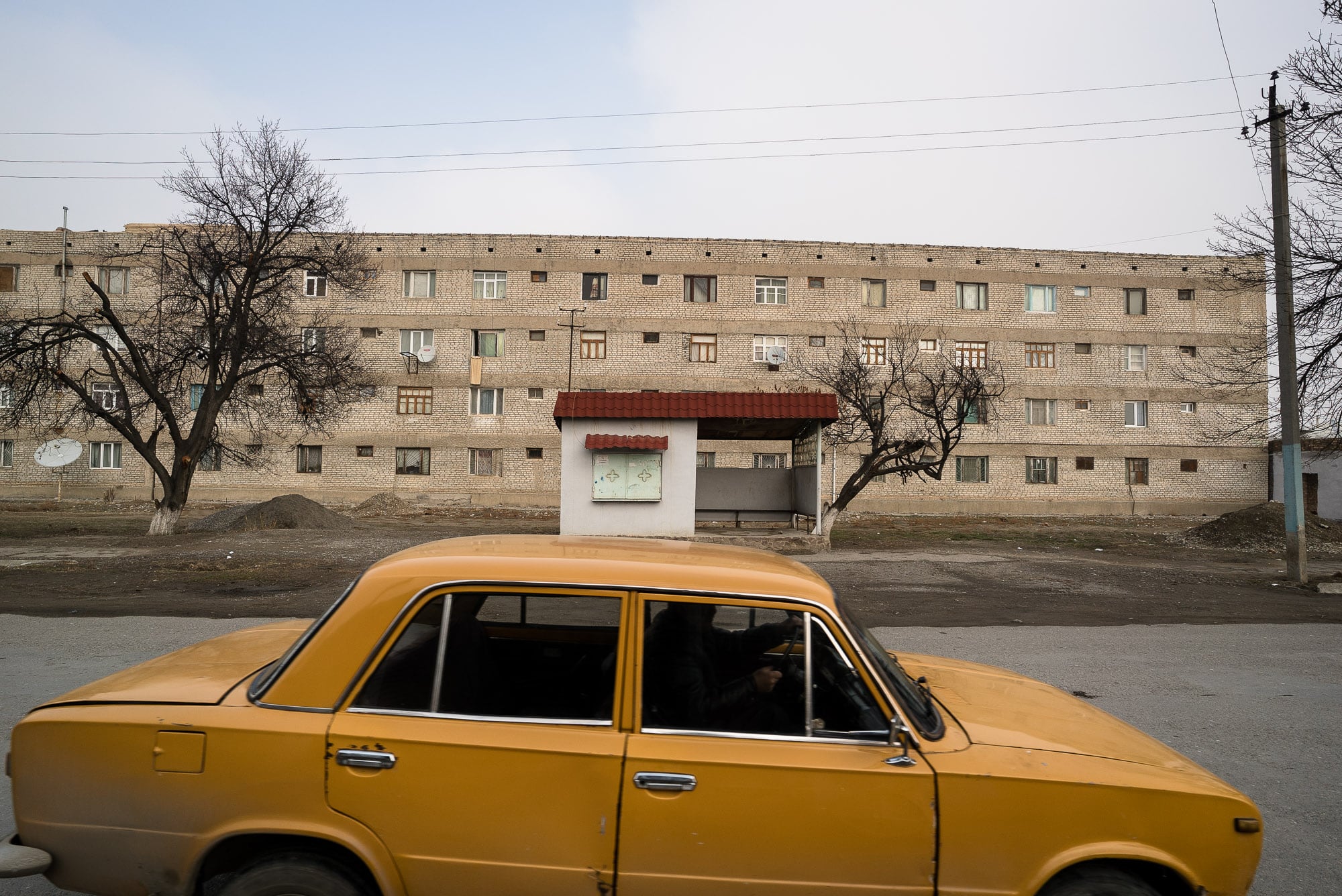 At some point Ruben developed a pain in his knee which caused him to go back to the hotel and wait there. So I was on my own for the rest of the day:

I walked past this container: 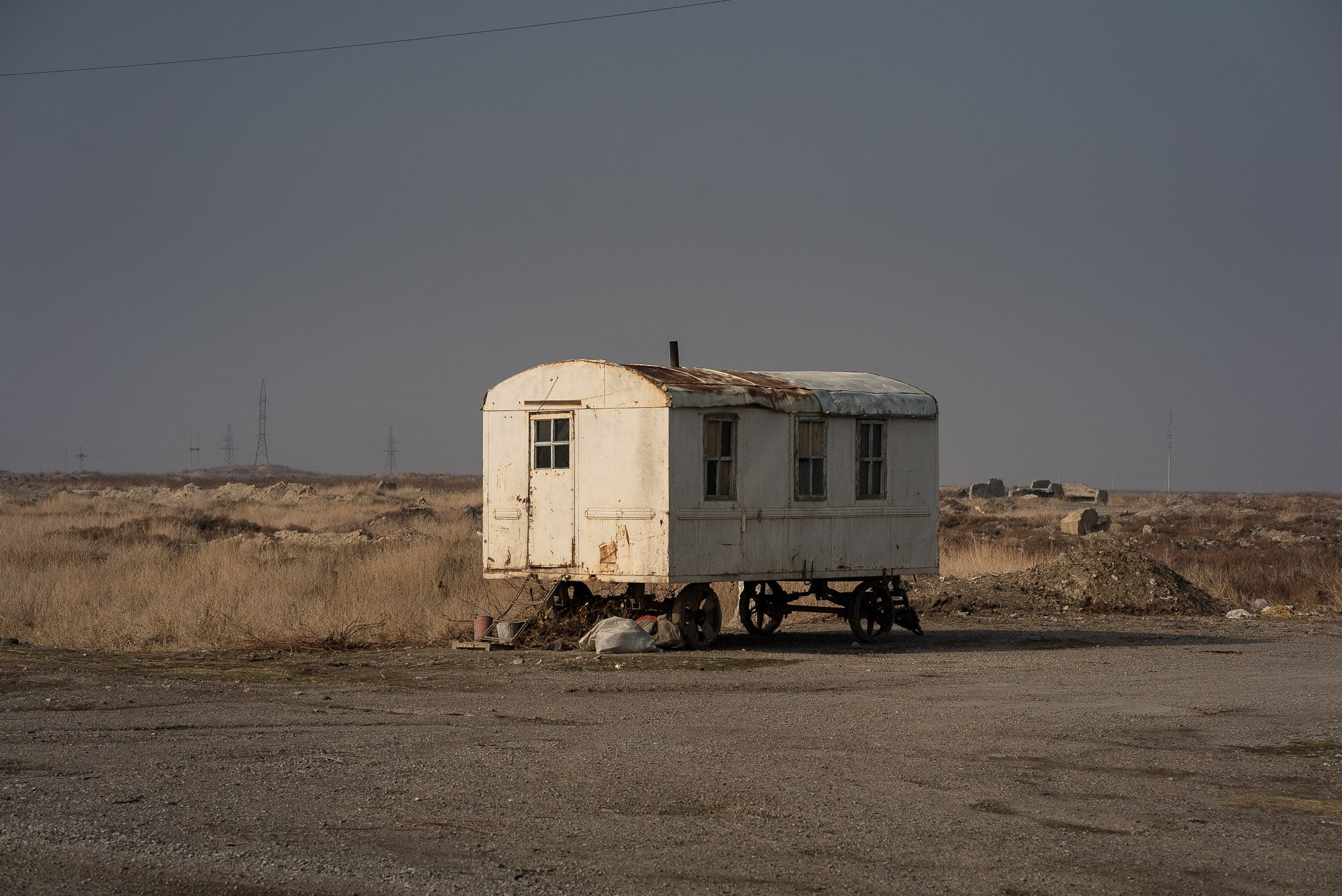 And then I saw this official road sign that announced Samarqand: 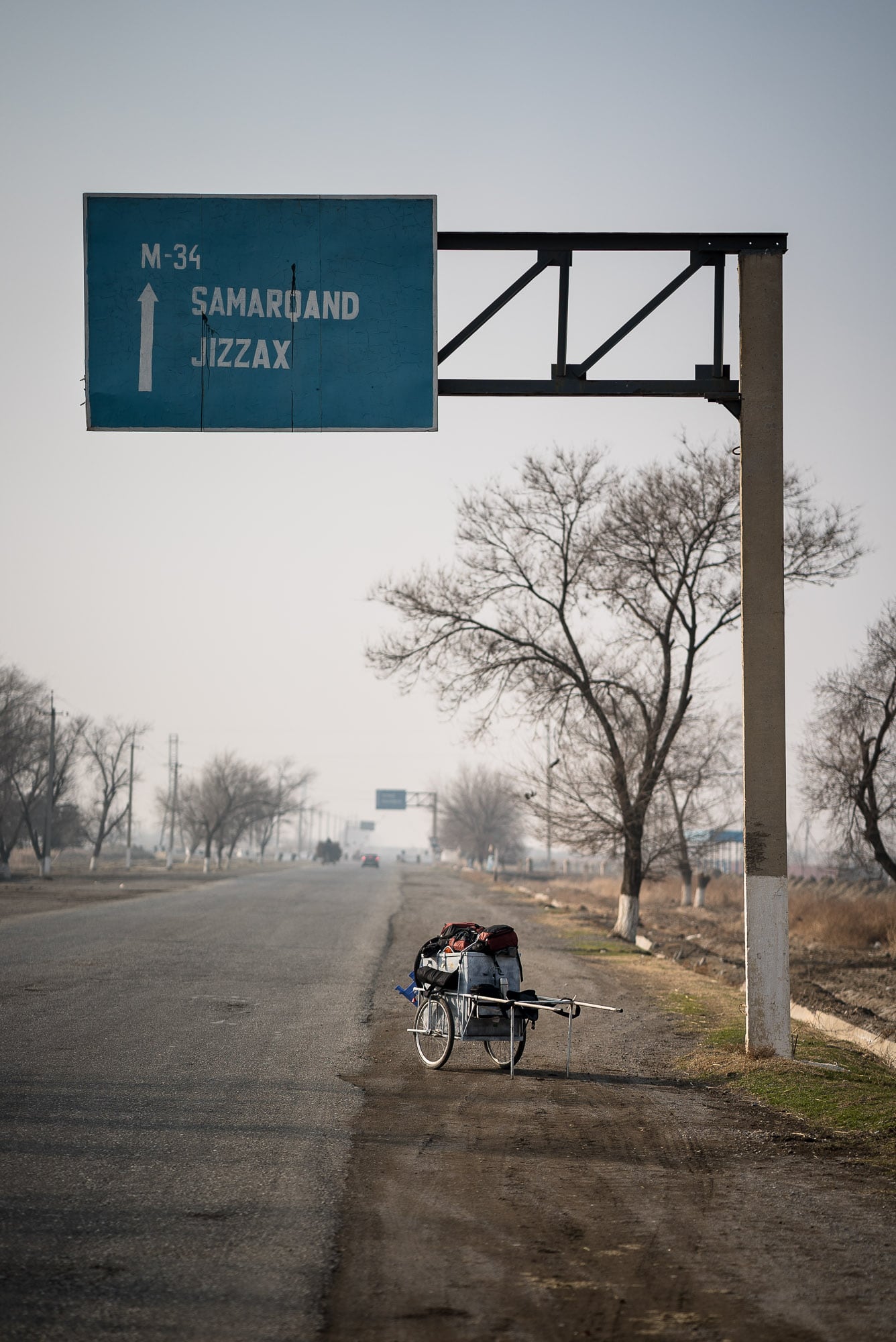 I was even more excited than the day before:

But I had to leave the road sign eventually. And when I did, I noticed that there were these weird cones next to the road: 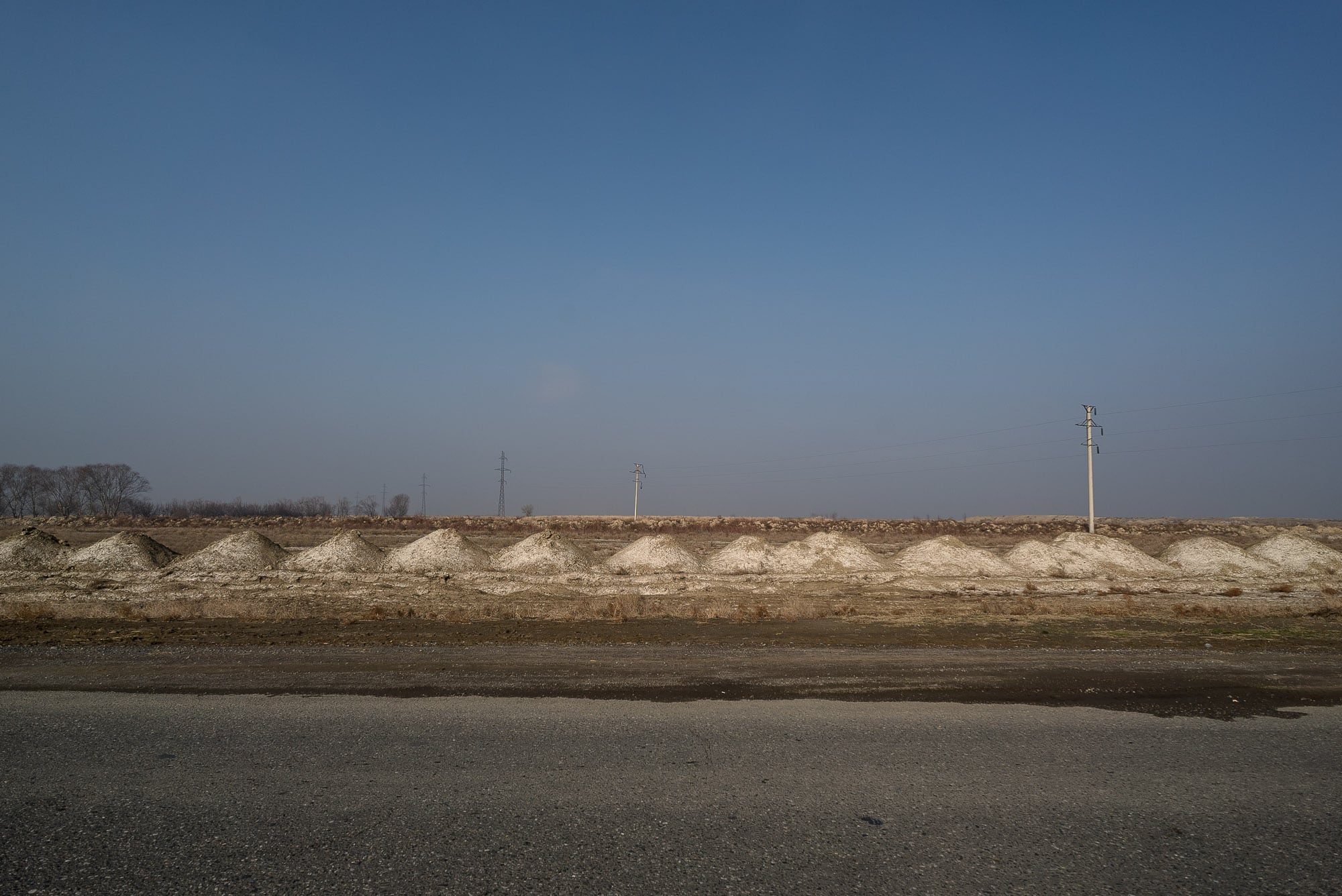 No idea what they’re for. 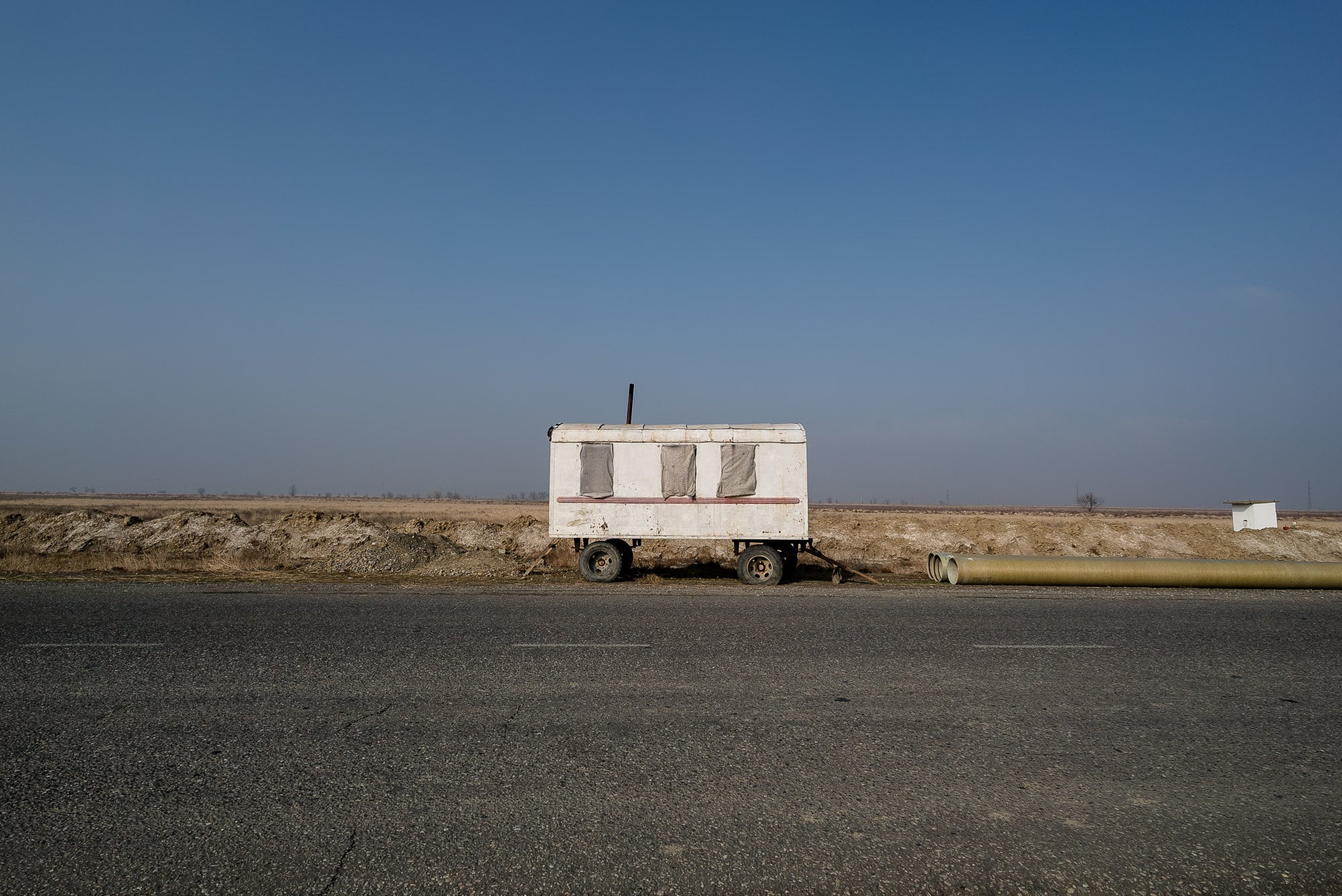 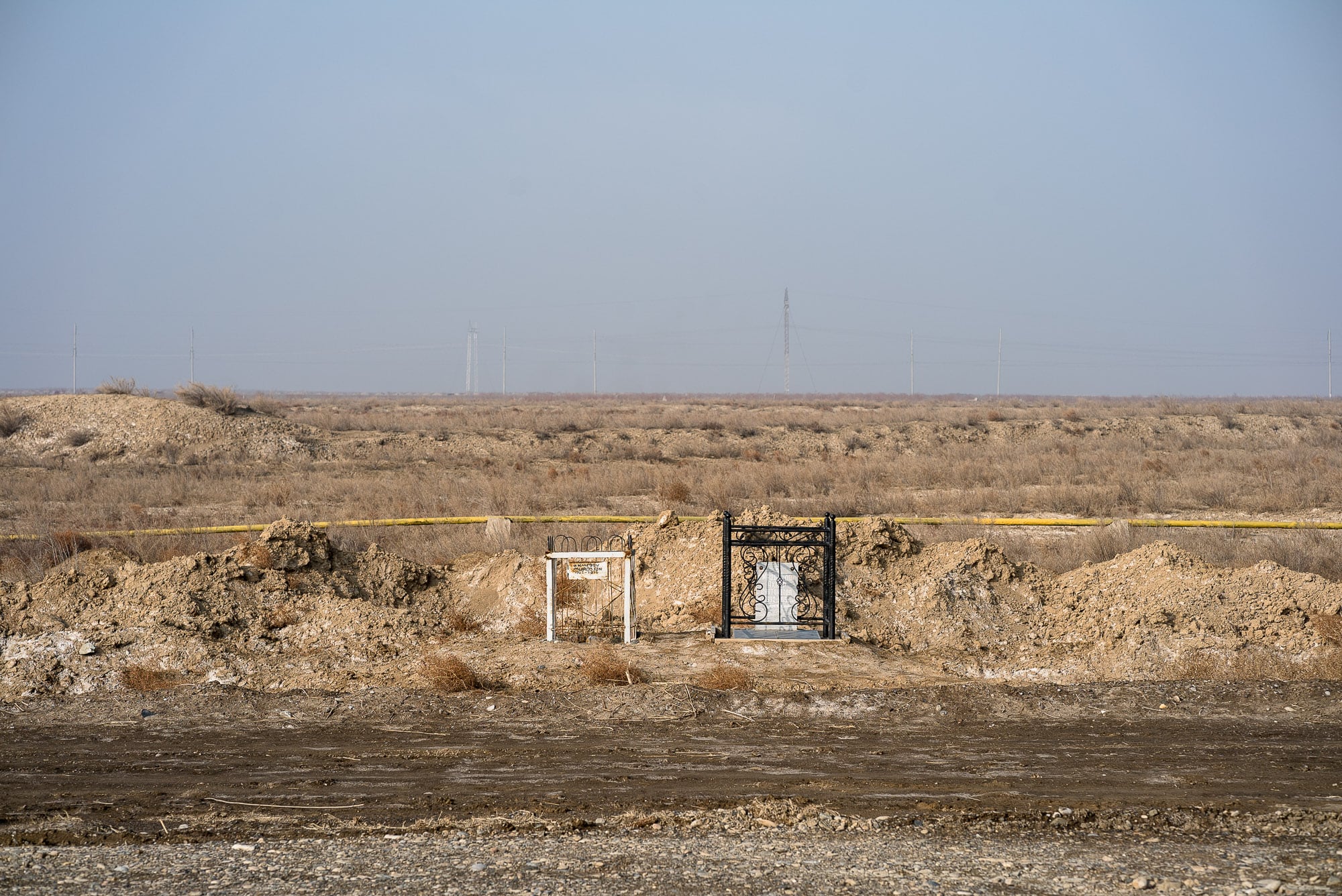 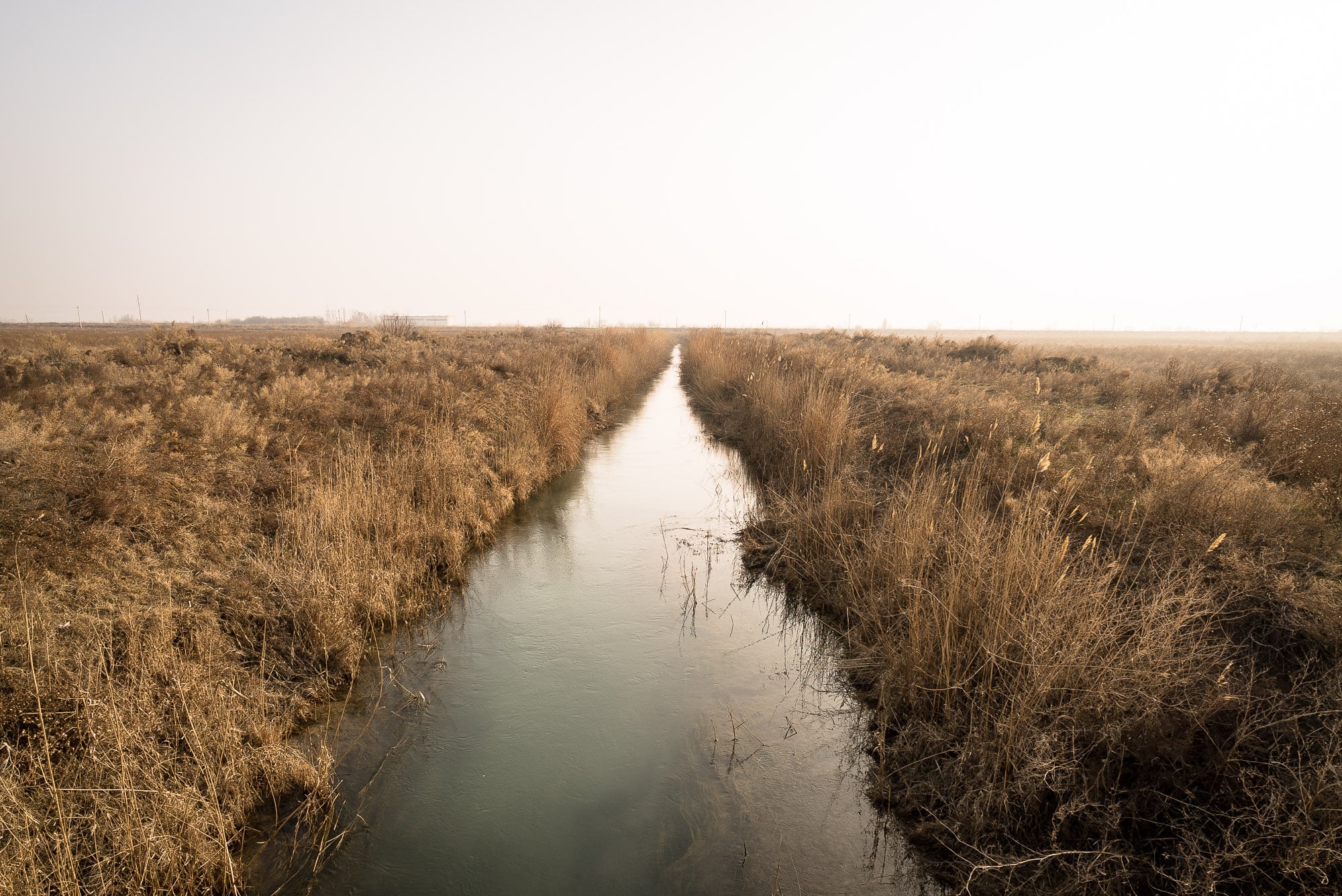 A melon stand that sold melons in winter: 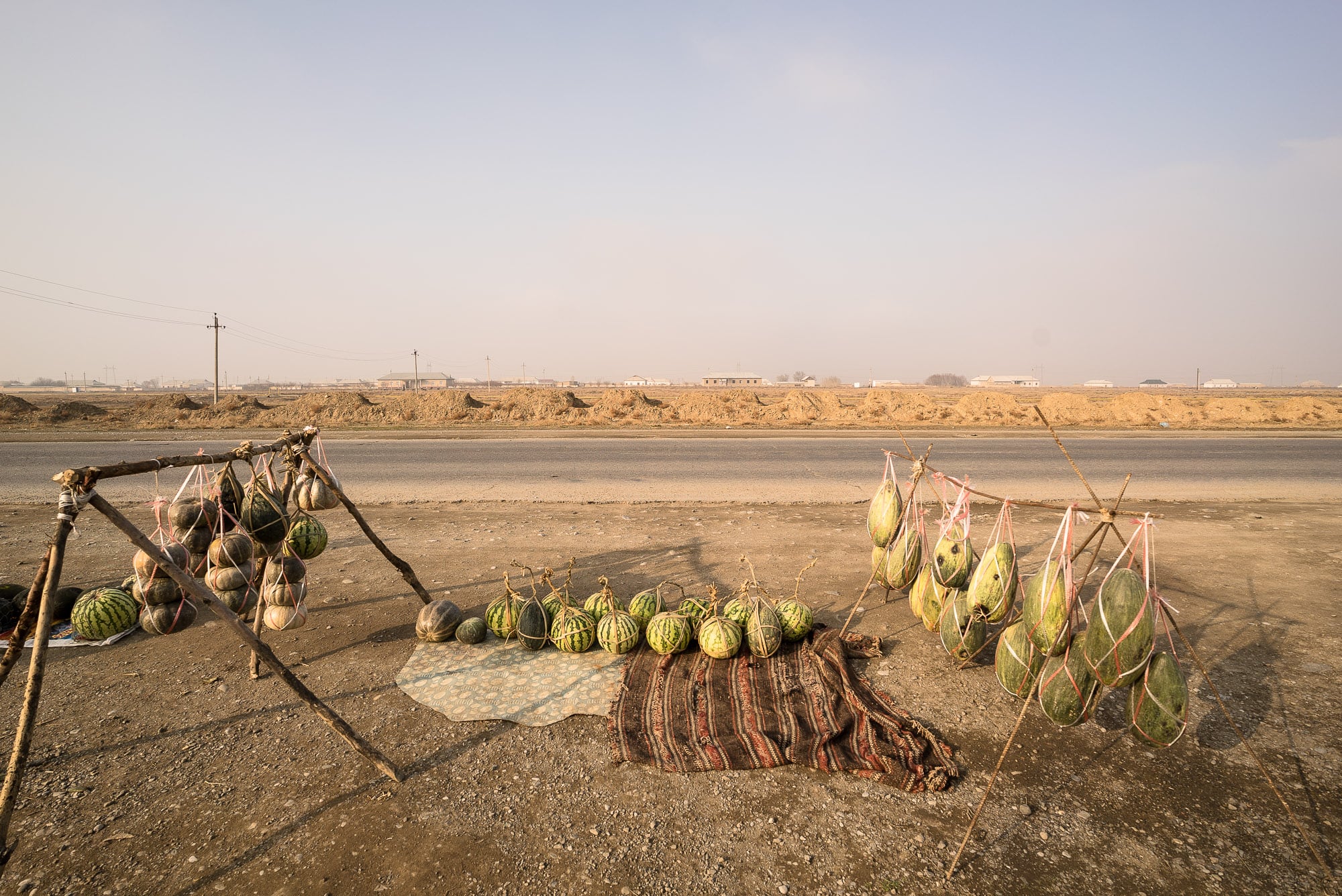 Most of the melons didn’t look that good though: 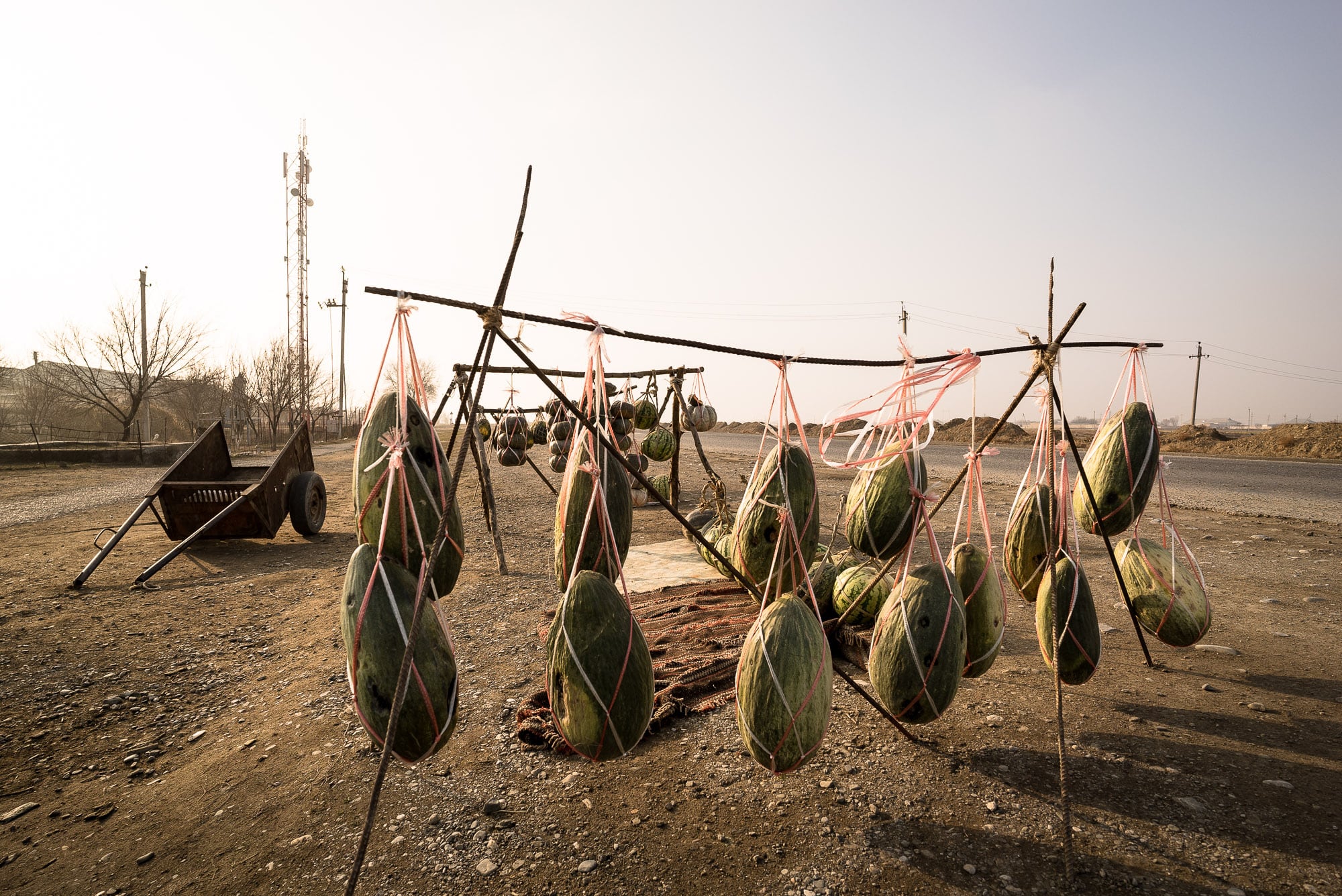 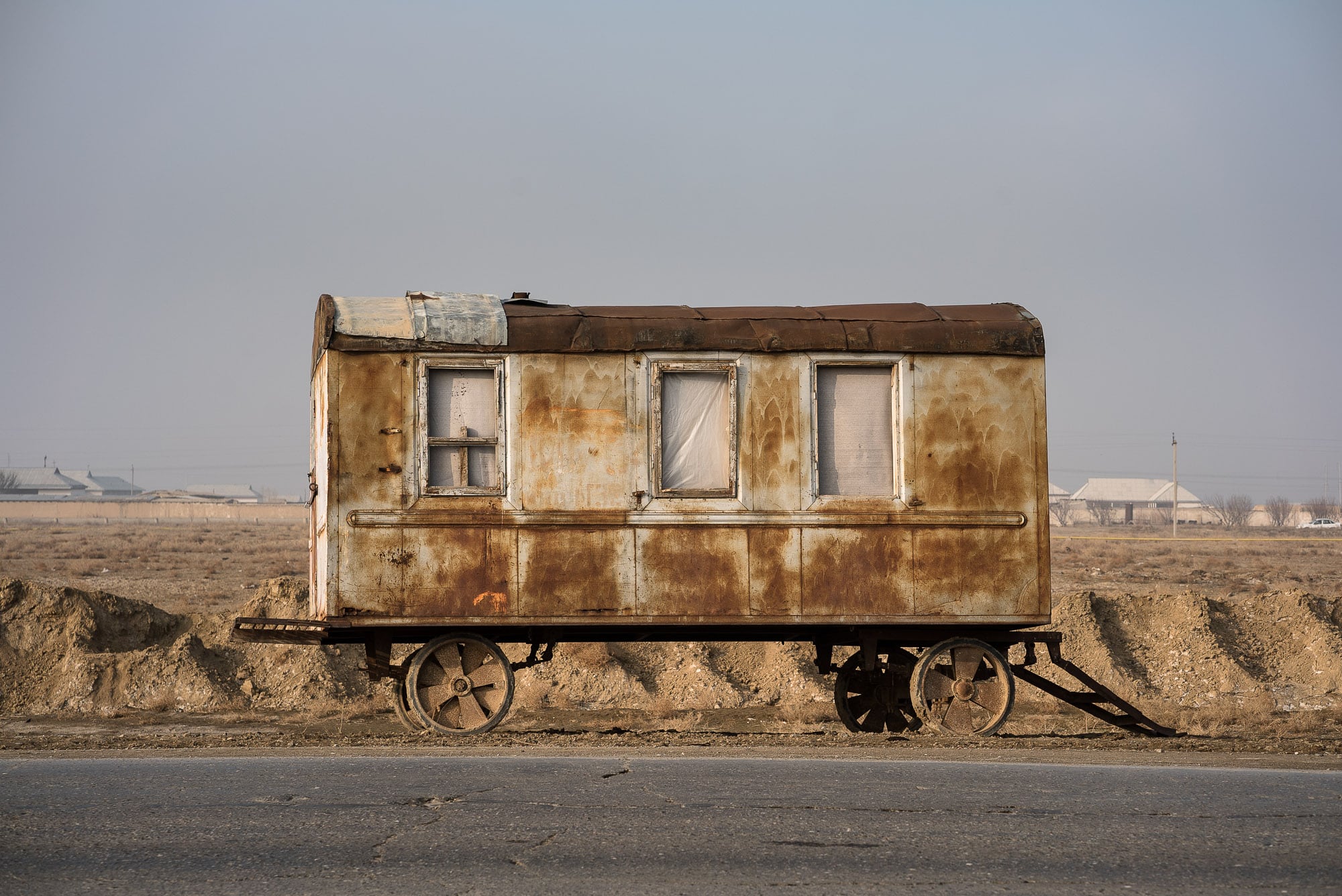 Then a strange fog started to descend upon the land: 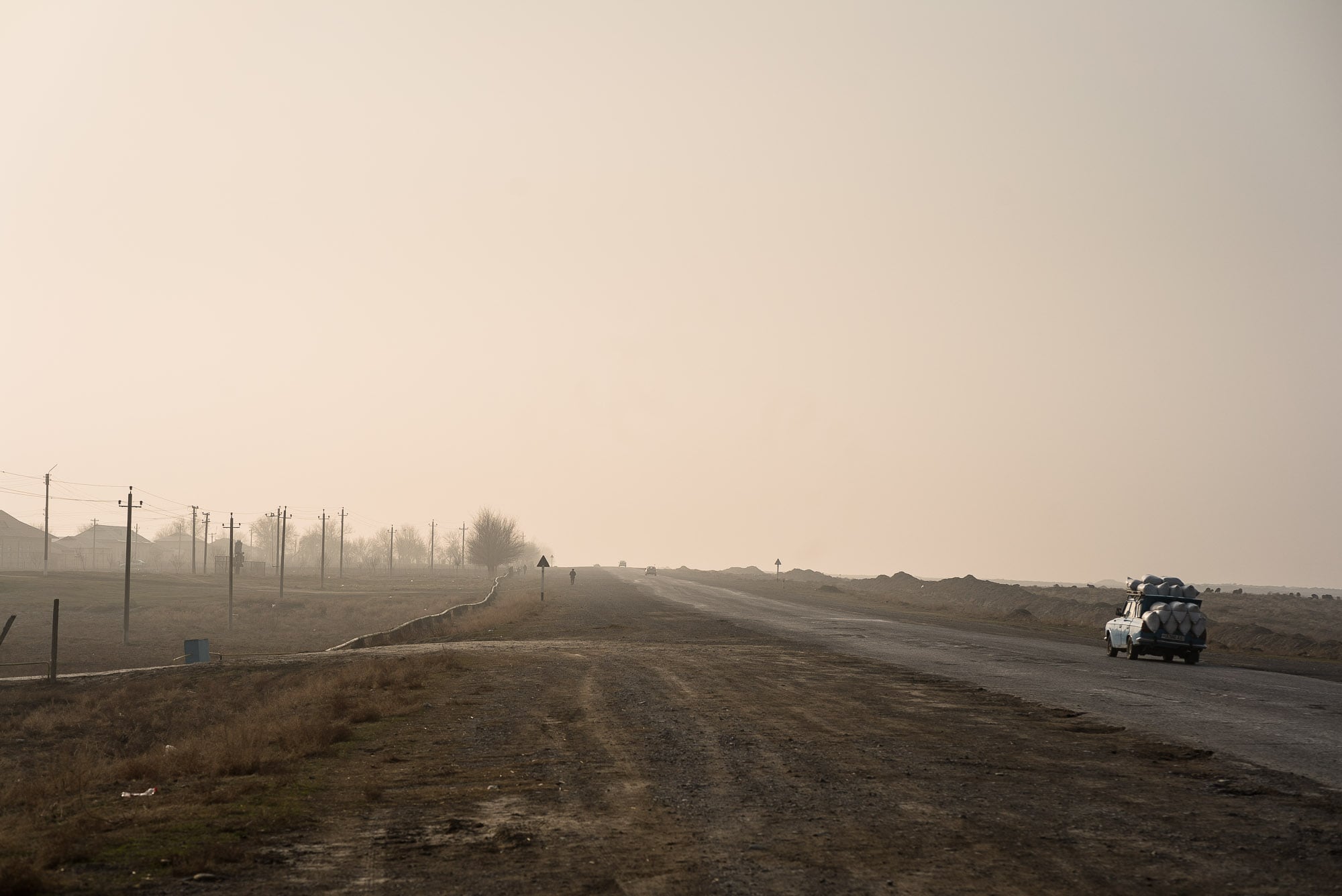 I took a break next to a little lake: 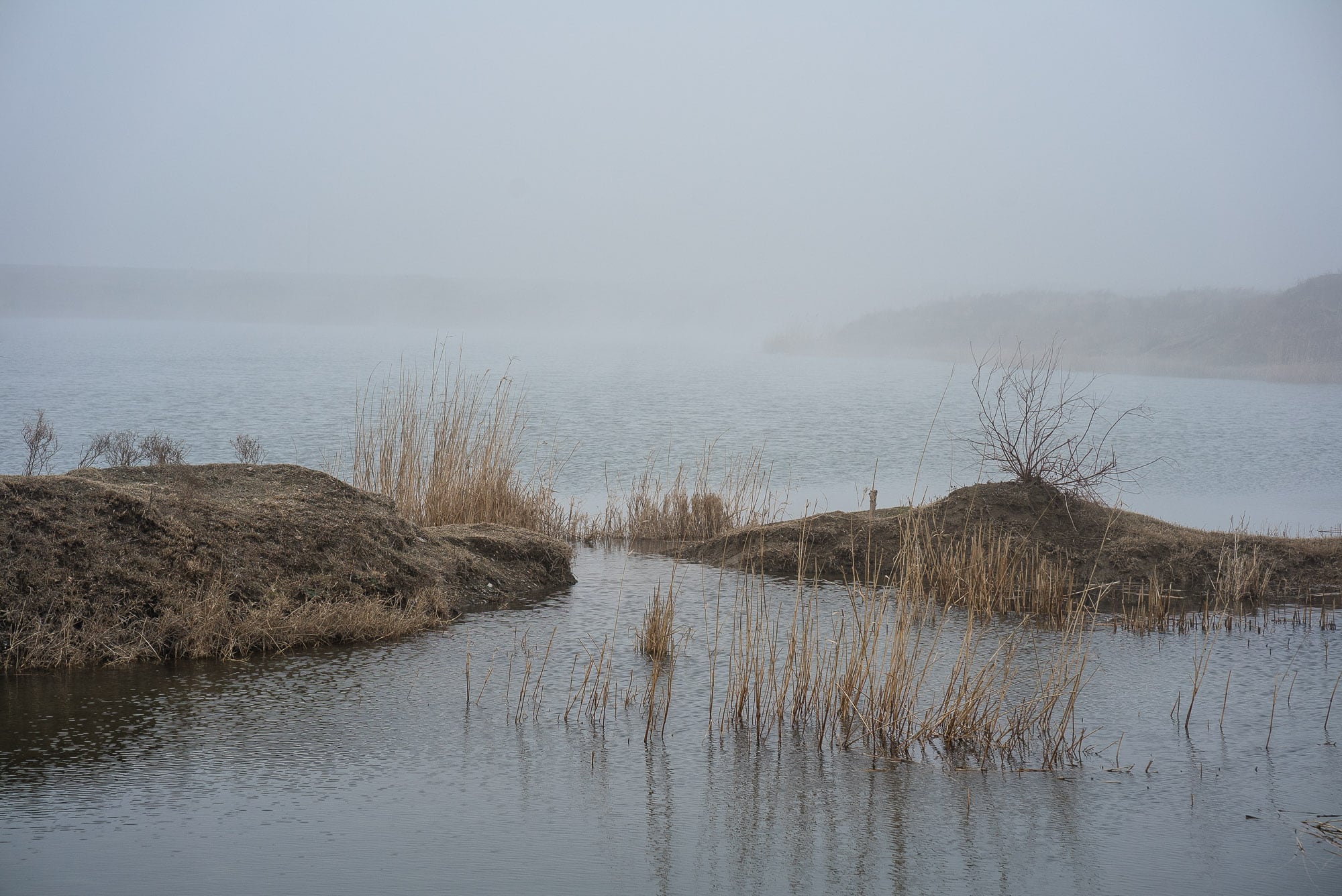 And then the fog engulfed us, the Caboose and me: 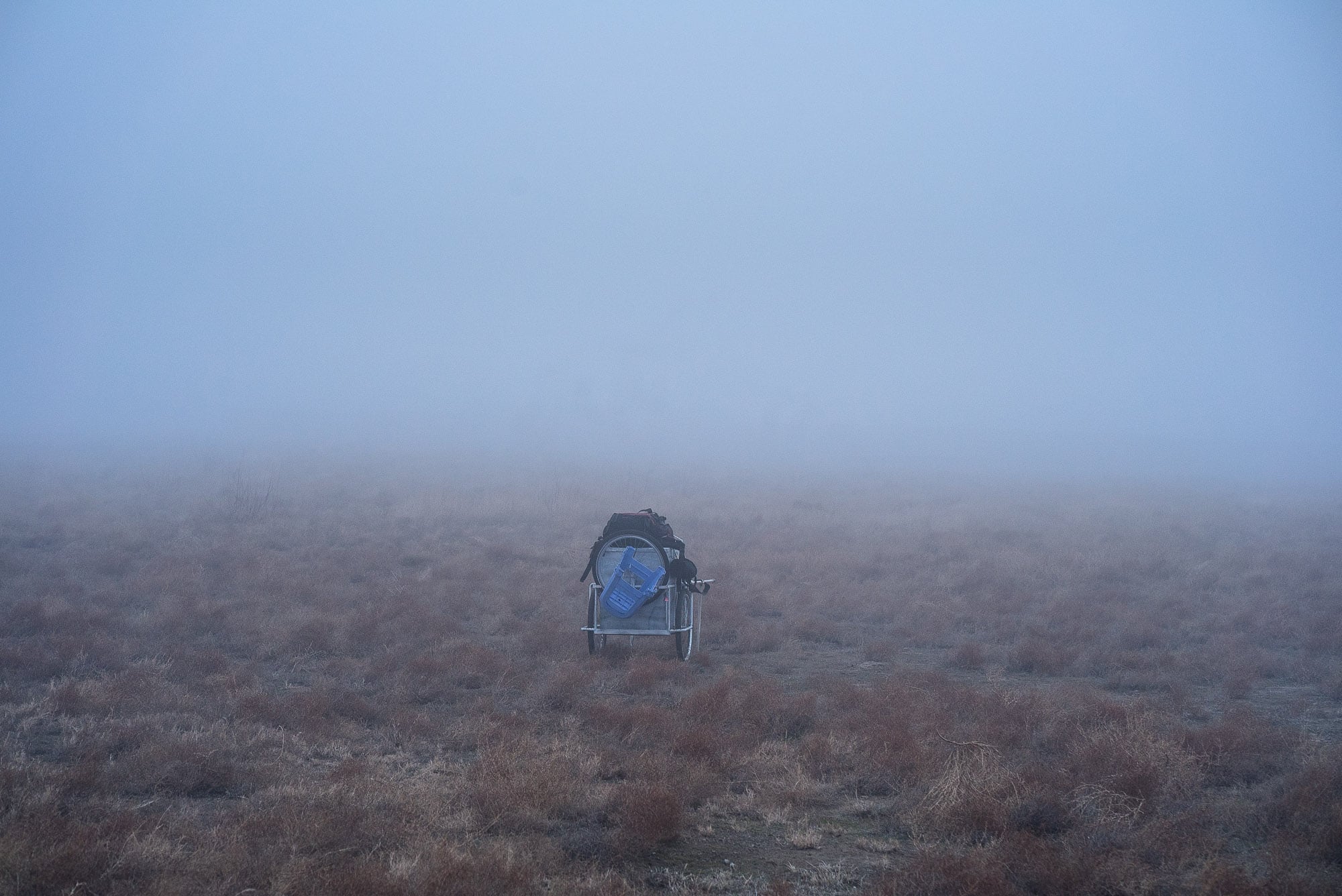 I took a video of us disappearing in the fog (which I had always wanted):

But of course I had to come back and pick up the camera.

Then I went back to the road, and I saw sheep herds in the myst: 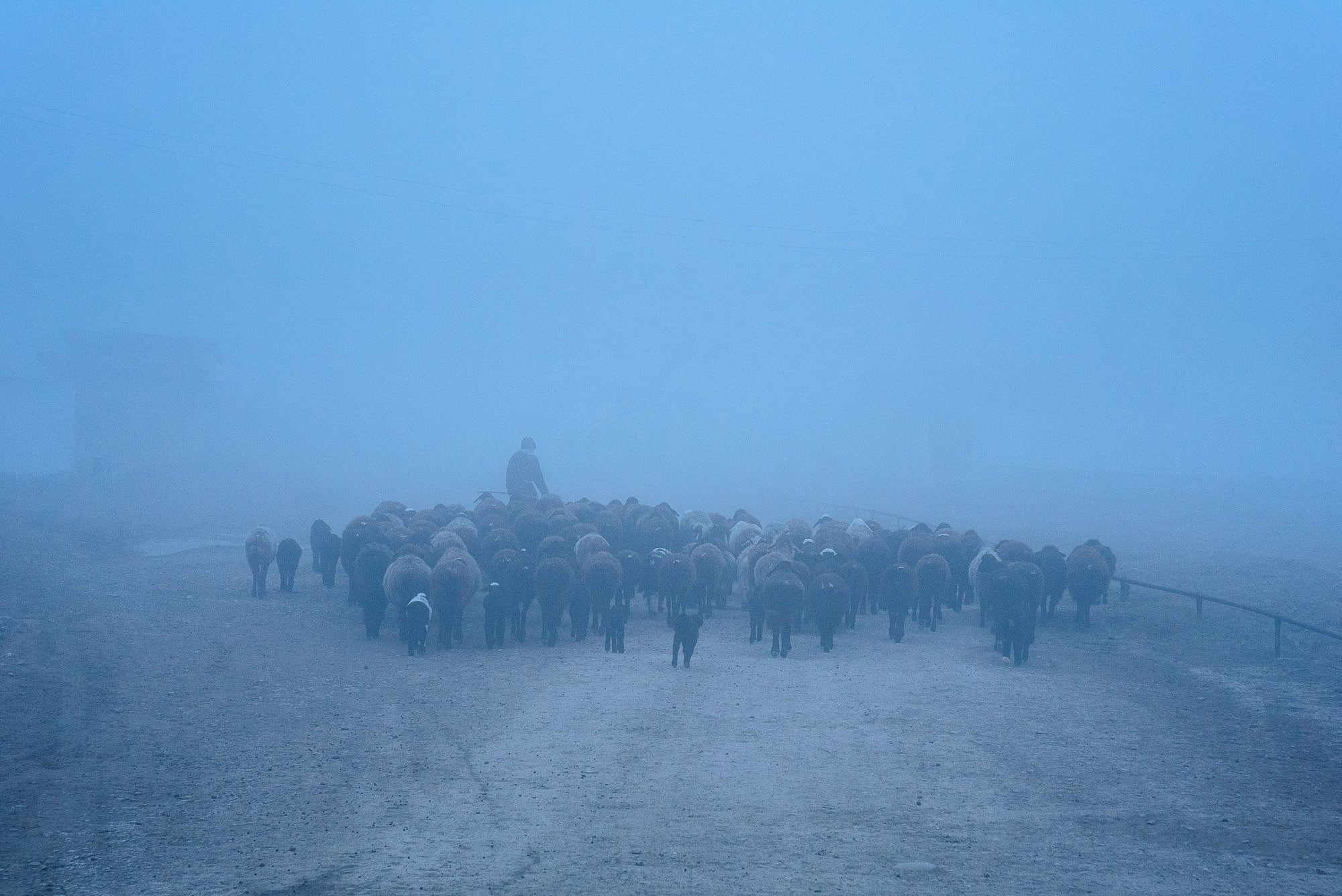 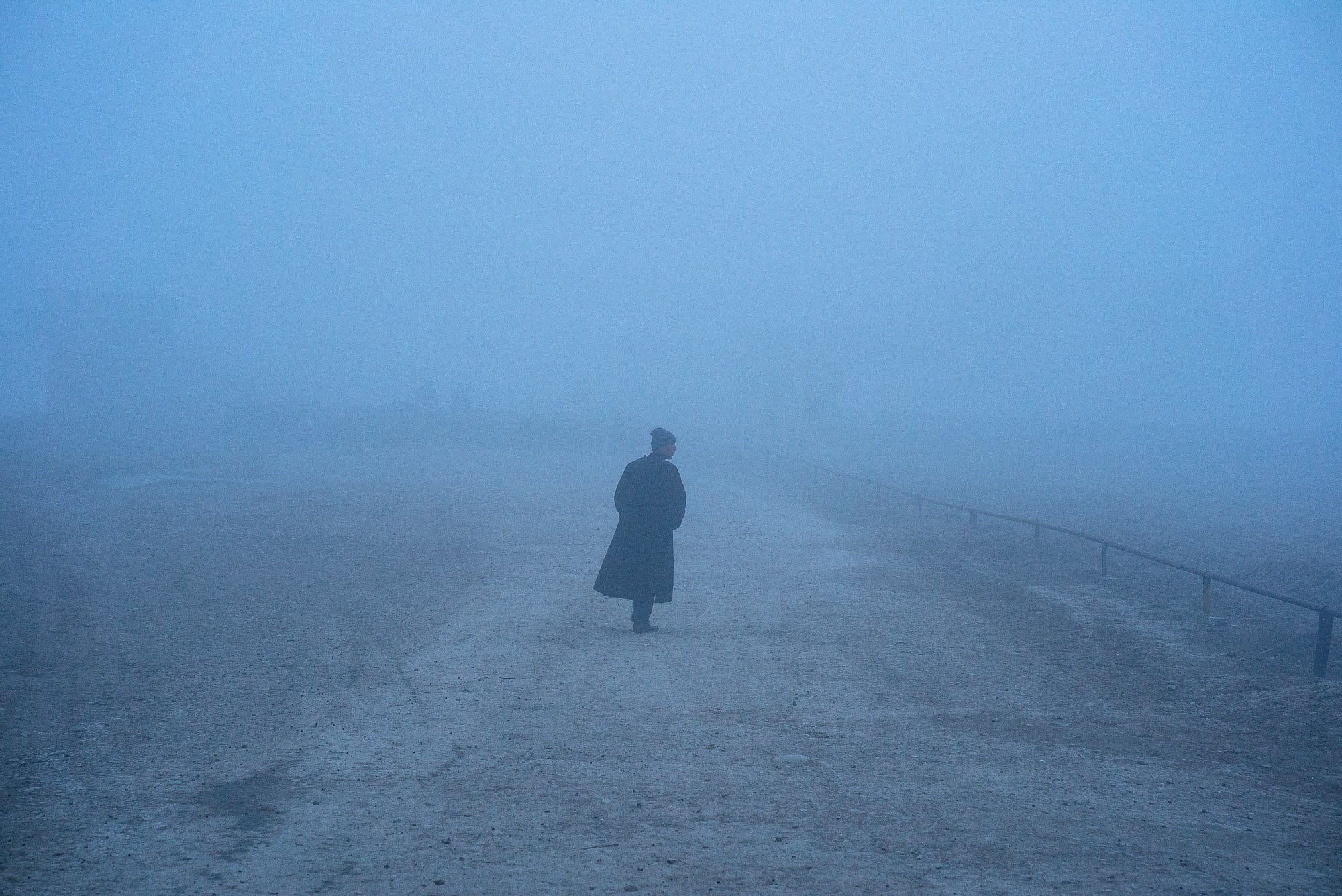 And the site of what appeared to be a recent car crash: 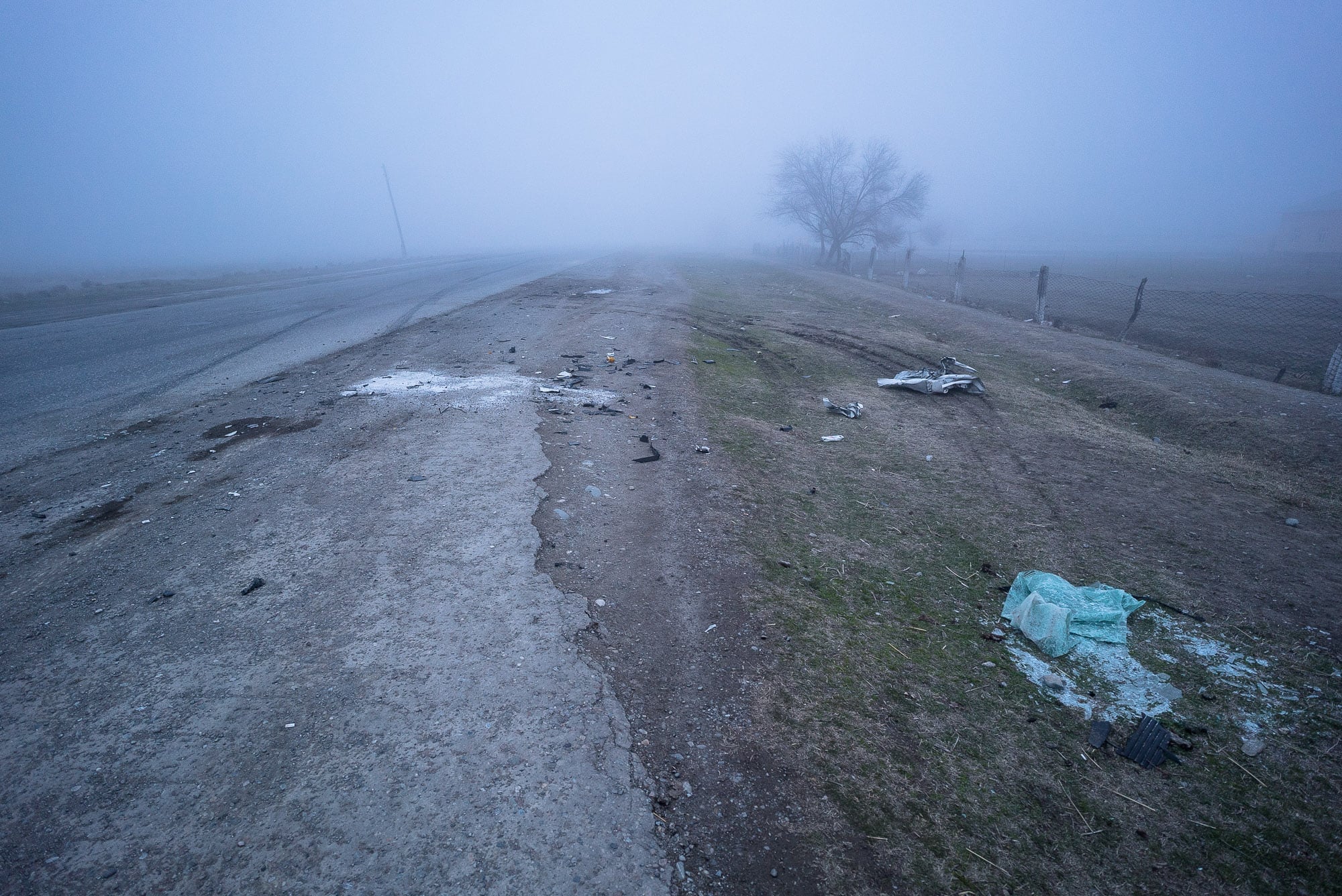 Then darkness fell, and I couldn’t see anything anymore:

I stumbled on, but I felt more and more scared, especially since people had been warning us about wolves (some had said they were jackals) out here in the steppe. And the steppe was not just any steppe – it was called the Hunger Steppe.

I got out the firecrackers that I had bought in Kazakhstan a few months ago: 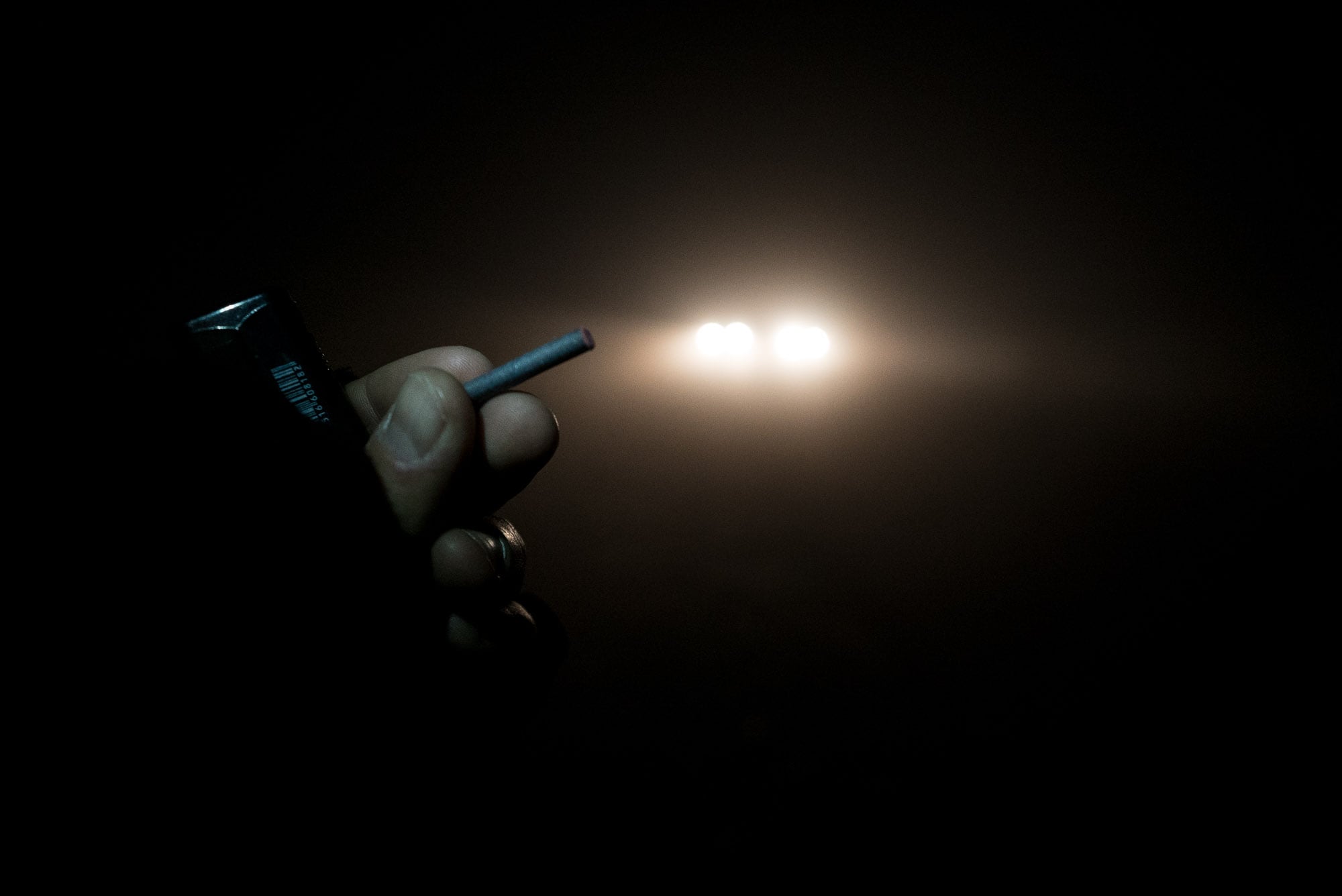 I would walk a few steps, then light a firecracker and toss it into the darkness. Then walk another few steps, and light another firecracker. I never saw any wolves or jackals. But I wanted them to know that I was a mighty human who could make much noise and light at the tip of his fingers.

When I reached the settlement of Ulyanovo, I had a run-in with the military. They checked my camera and my papers for a half hour, but they were very polite about it and eventually let me go.

Then I took a picture of this bike, just because I thought it was pretty: 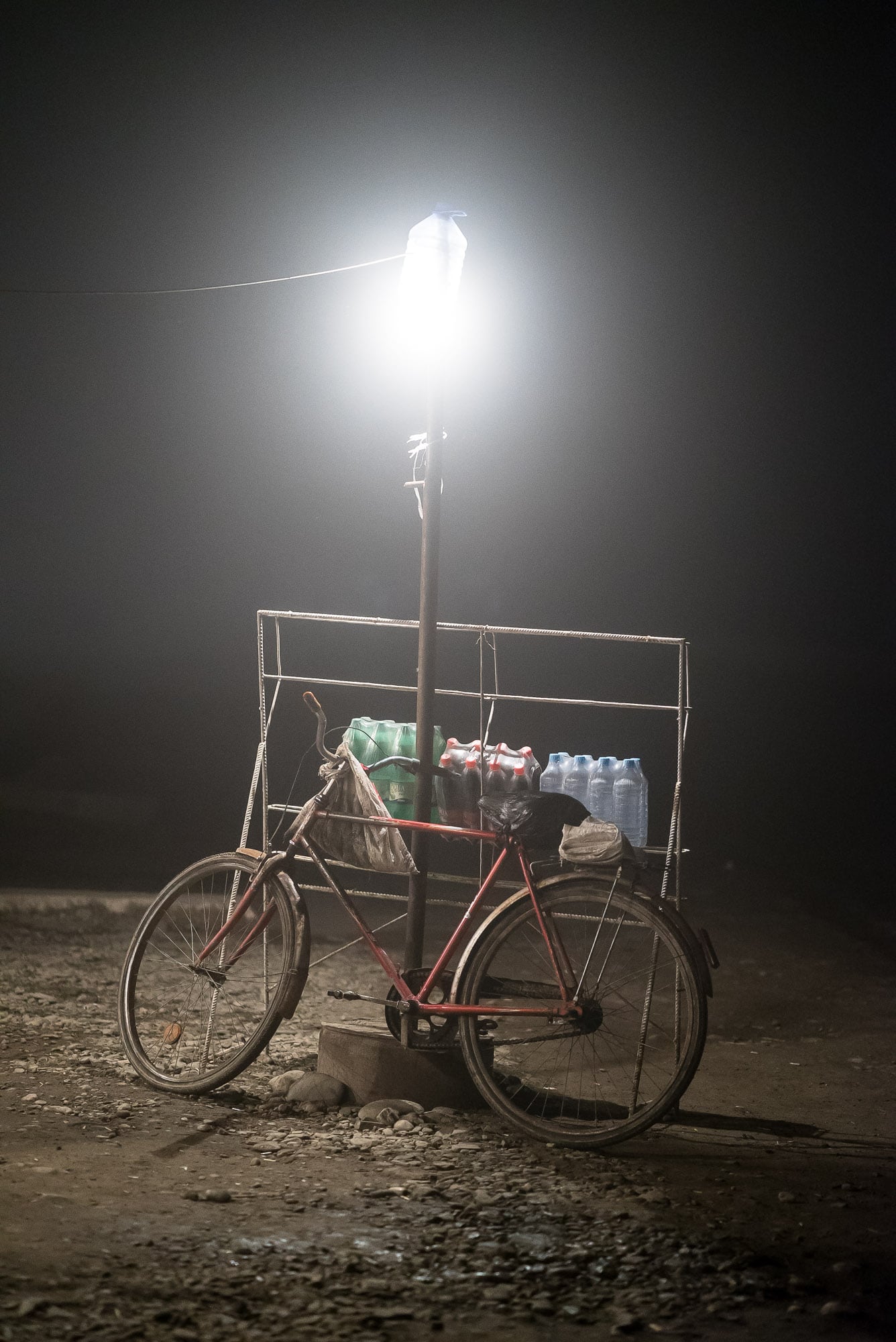 And the owner of the bike, a certain Ikram, invited me to park the Caboose at his place while I went back looking for my brother back at the hotel: 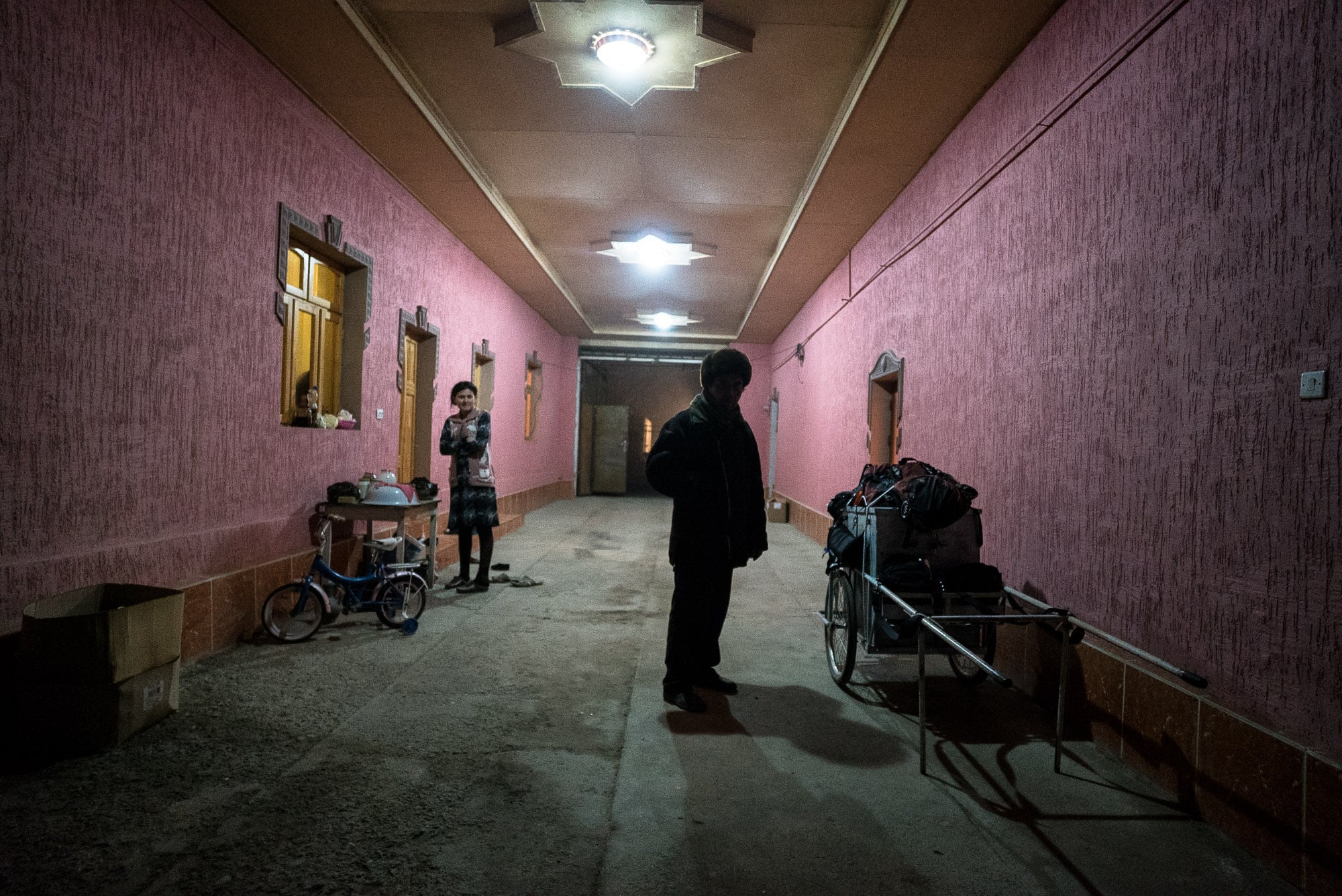 At first it was a bit hard to find a cab driver to take me back to Yangiyer, because nobody seemed to want to venture out into the fog.

But in the end I found a guy: 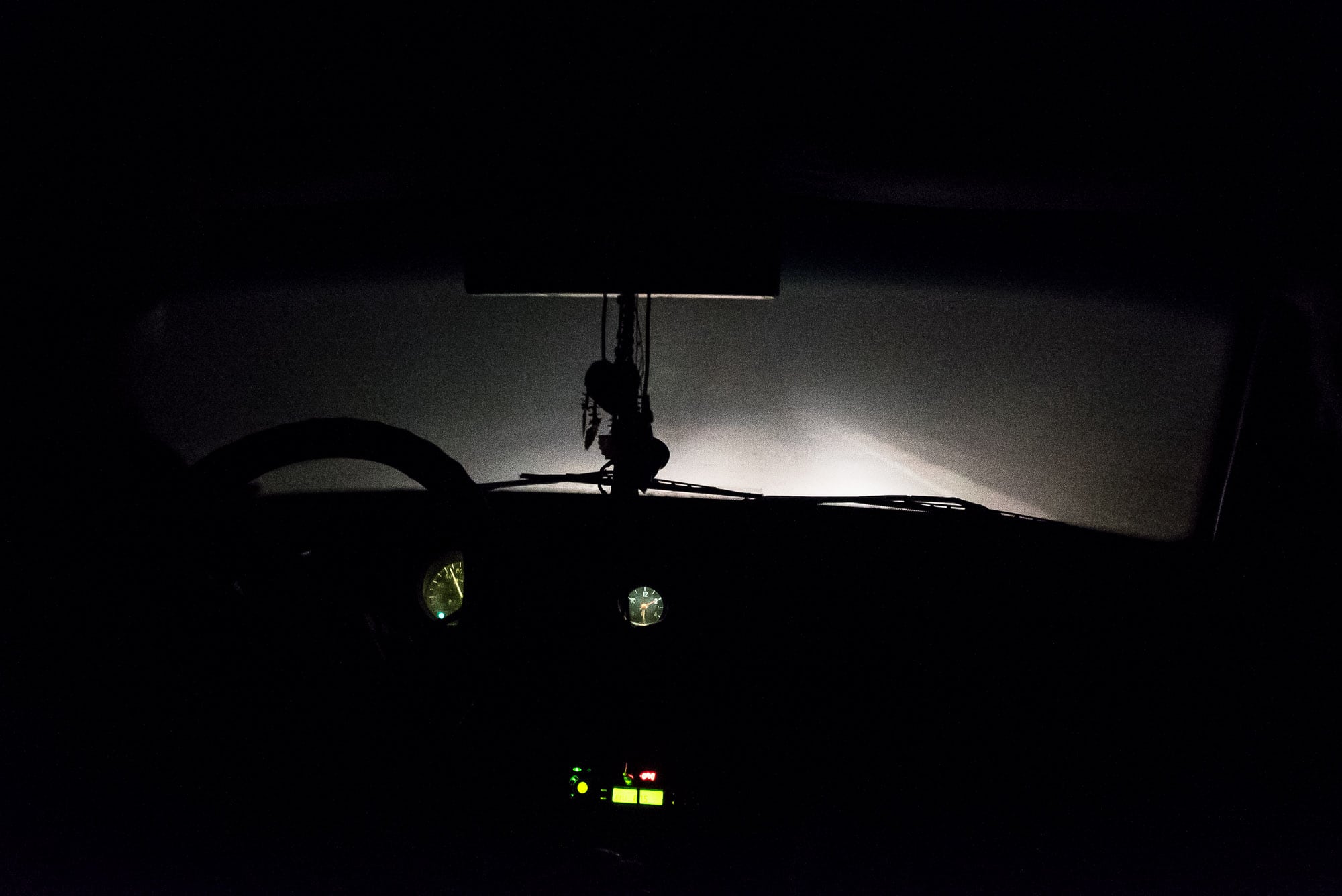 It was a forty minute car ride through the steppe.

I had walked all day to cover that distance.