Wearing my blue Santa hat, and with the Caboose nicely adorned, I said good-bye to the friendly people of the hotel: 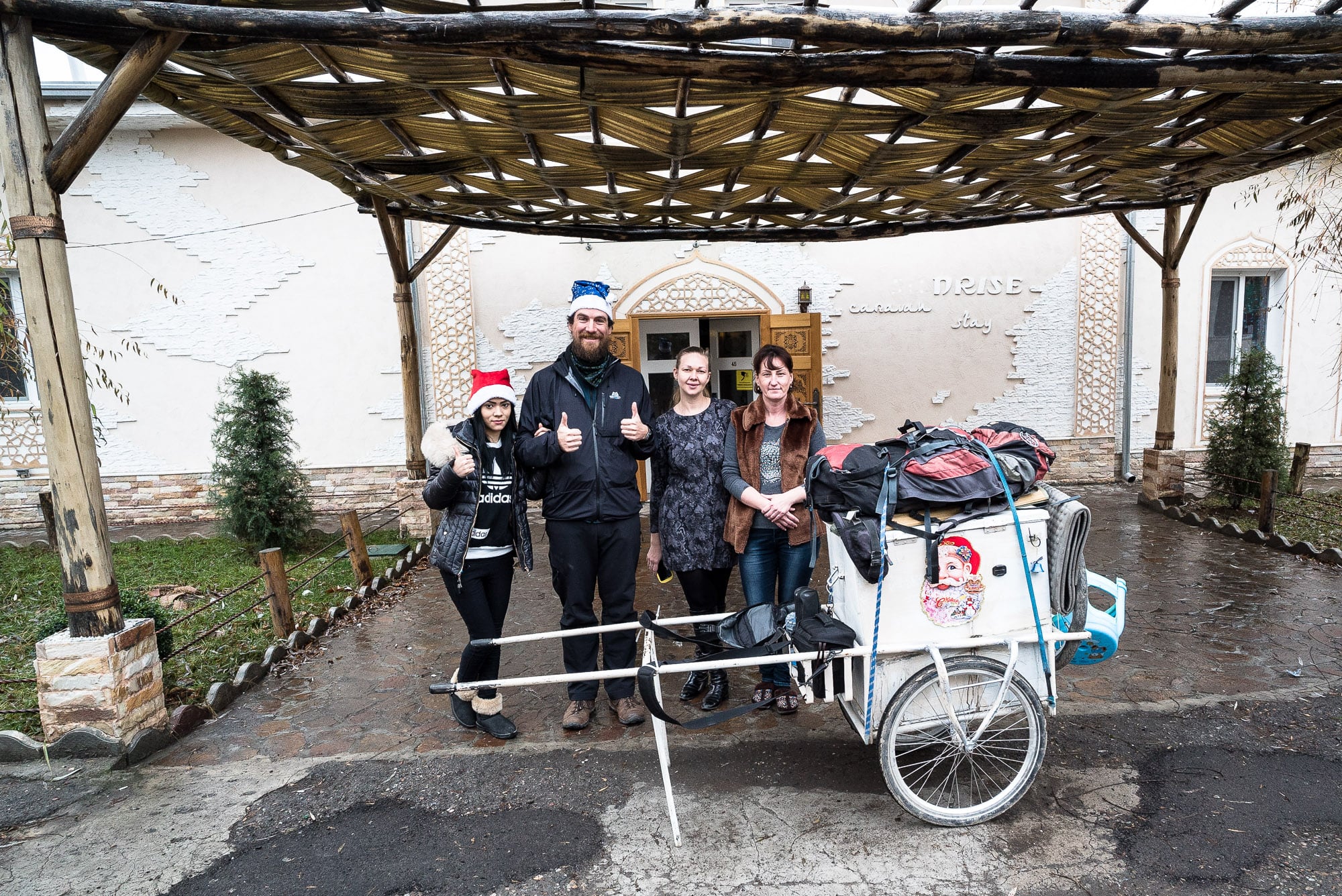 Looking back it seems a little bit like decorating a sheep that’s about to be slaughtered. But I didn’t know that yet.

So we walked out of Tashkent, the place that felt like a village sometimes and like a city at other times: 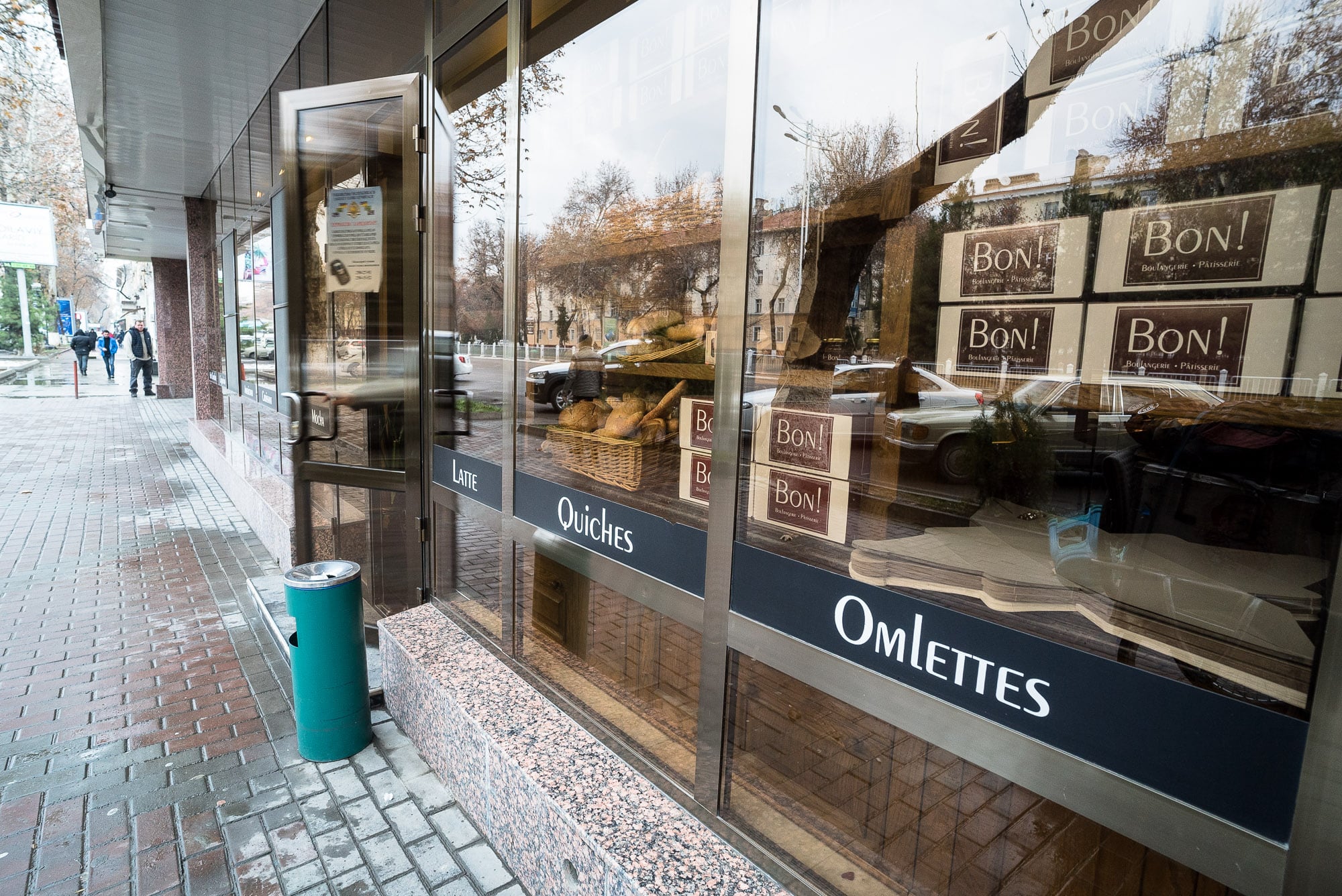 Walking with the improved Caboose was good: 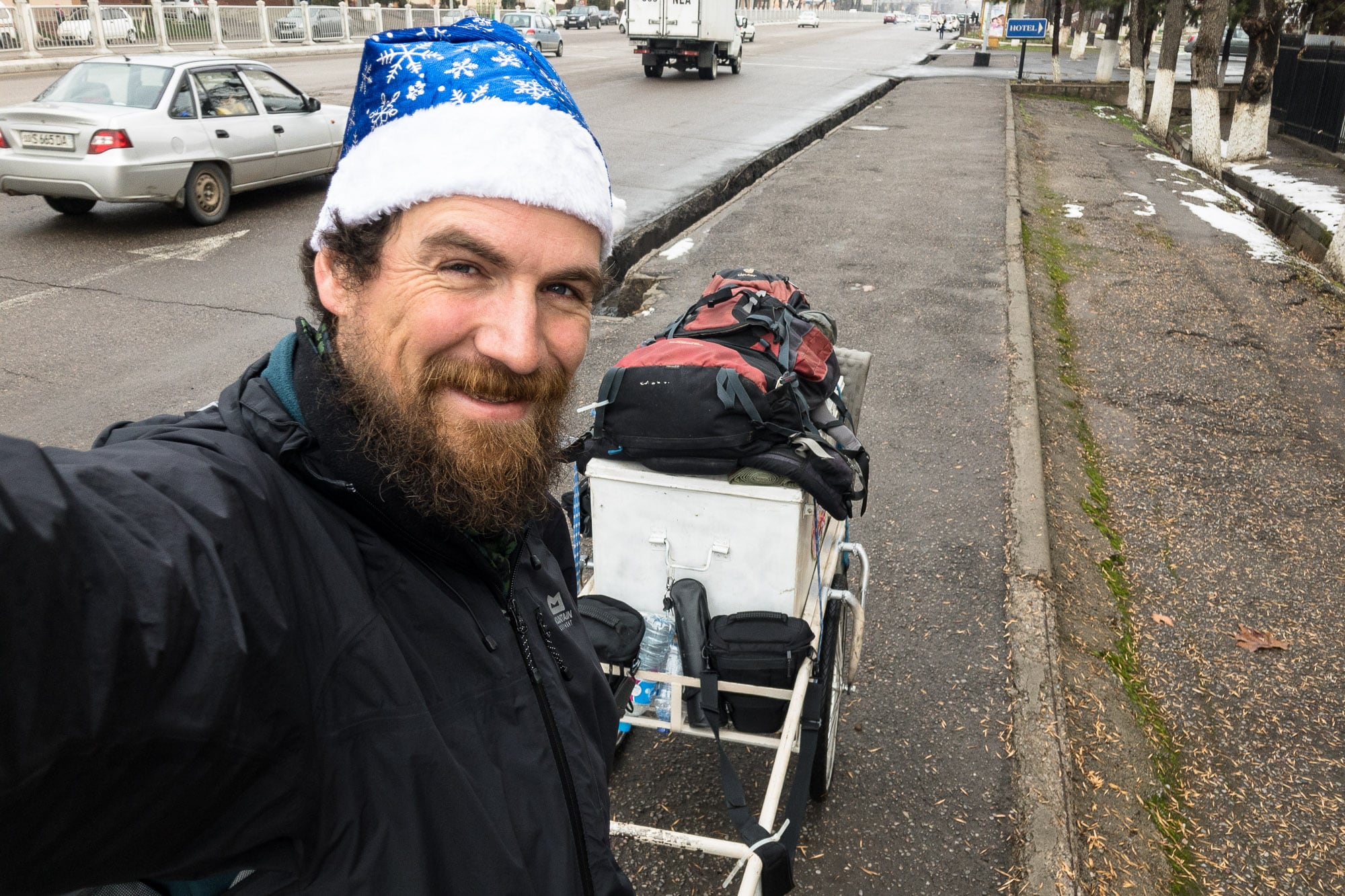 In fact it was awesome: 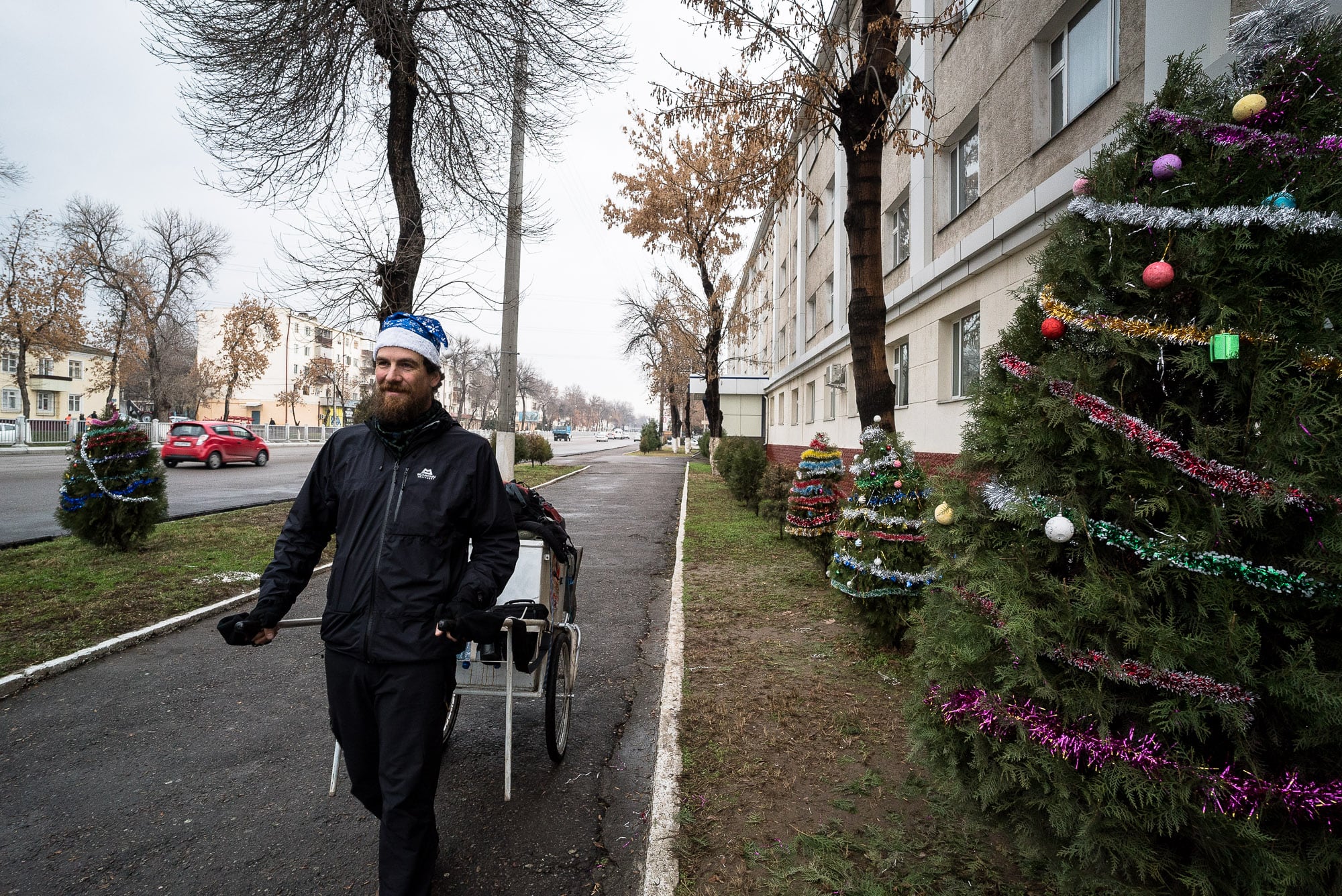 Maybe she already felt it, but I had no idea that she was about to die today.

I stopped near a bus station in the south of the city and had a nice serving of plov, one of the traditional dishes Uzbekistan wants to be known for: 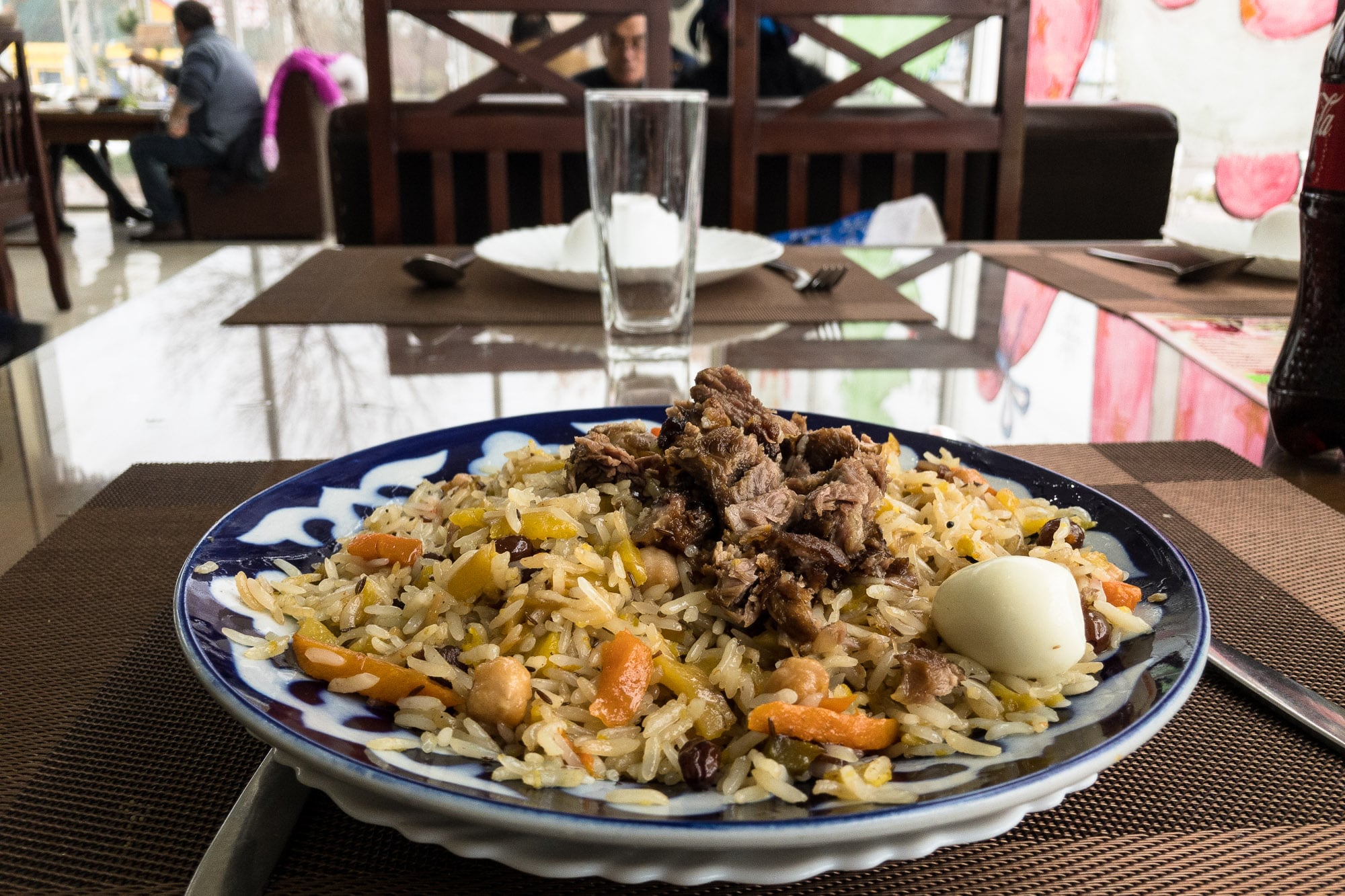 The sidewalk was good, too, at least most of the time: 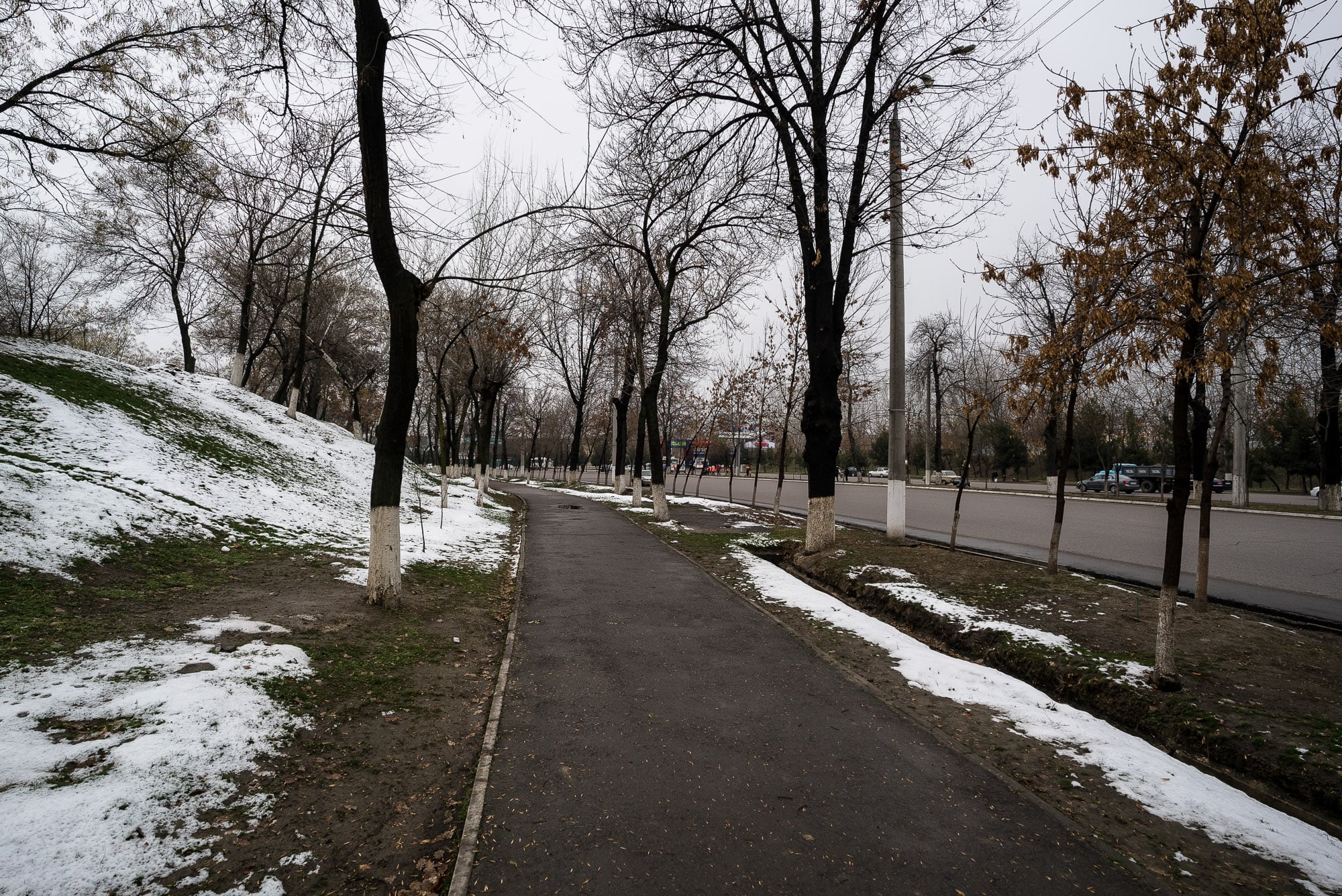 Then it started to snow: 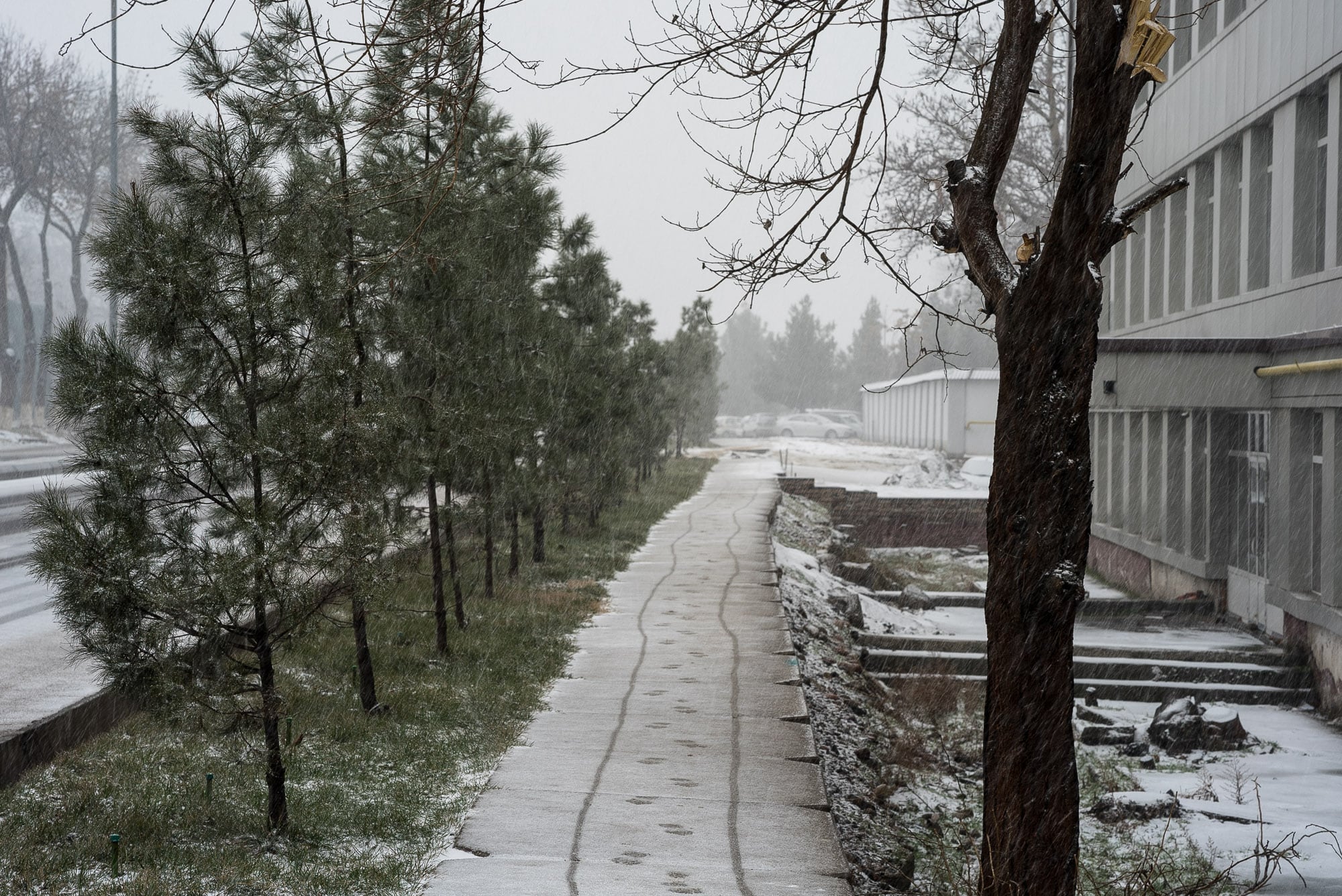 And somehow I was very happy about the snow:

There was another checkpoint just like the one we had walked past on our way into Tashkent a little more than one week ago: 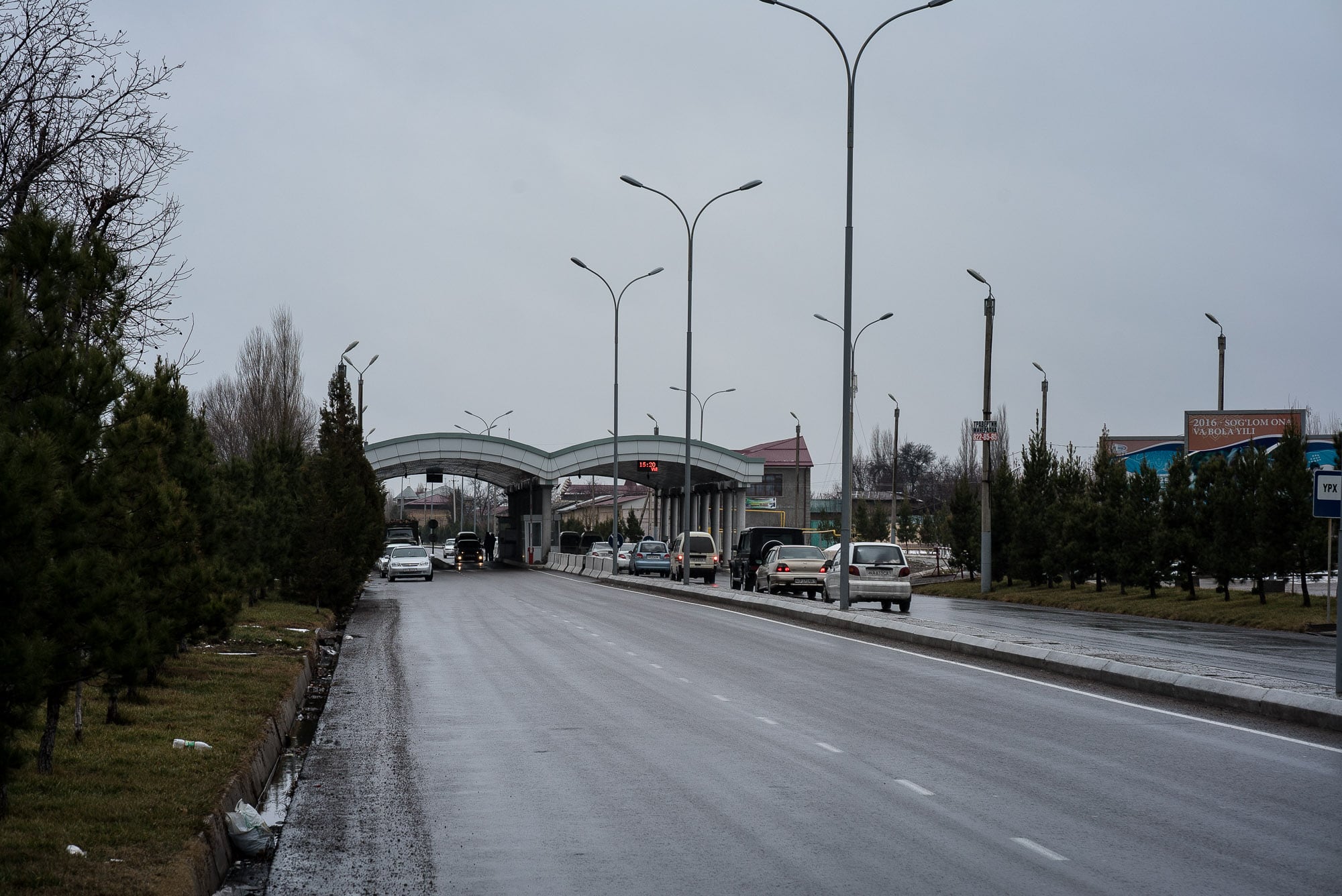 It didn’t seem to be that big of a deal though. A policeman wanted to see my passport, and that was it.

Then there was a holy site of some sort: 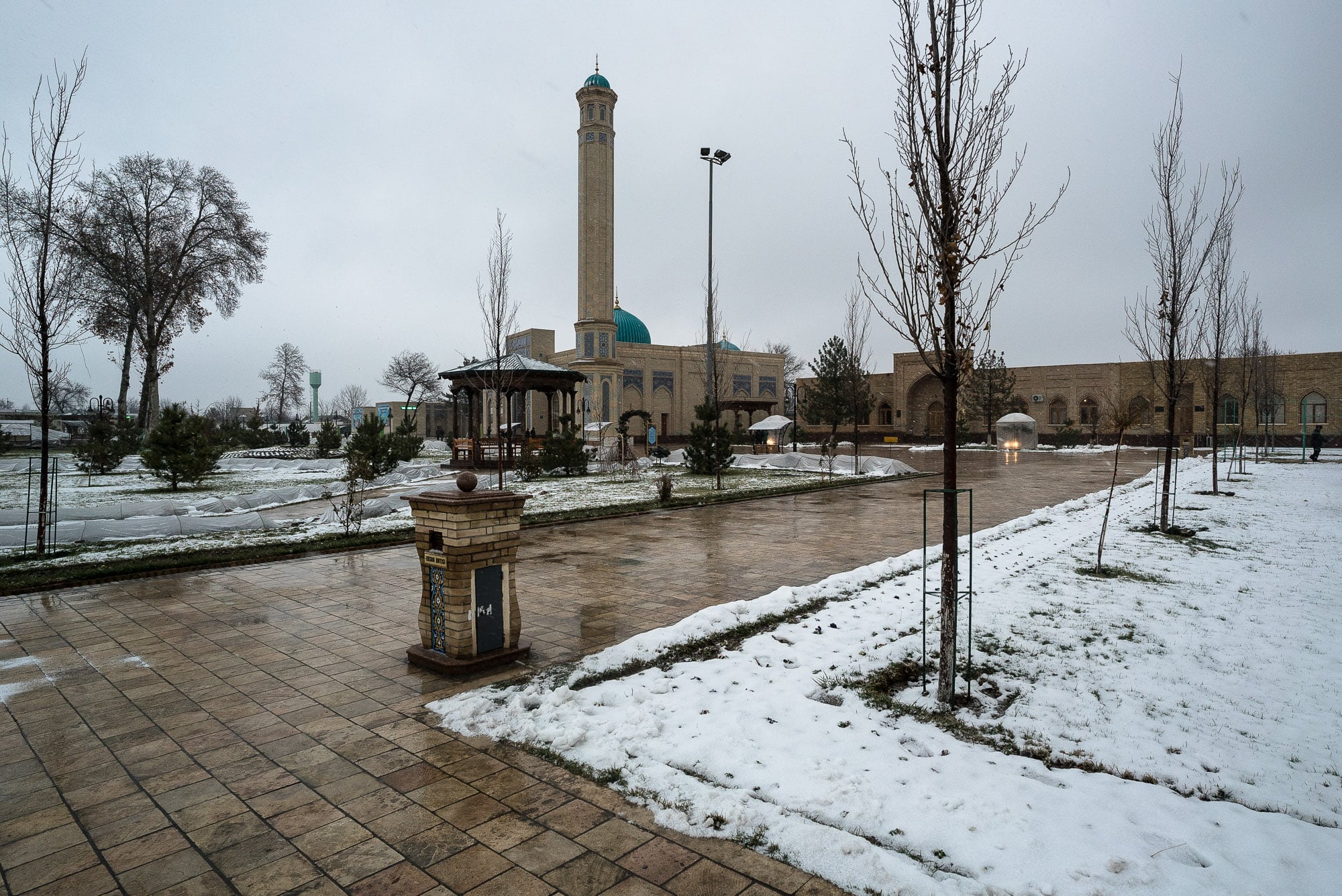 Well, first there were these: 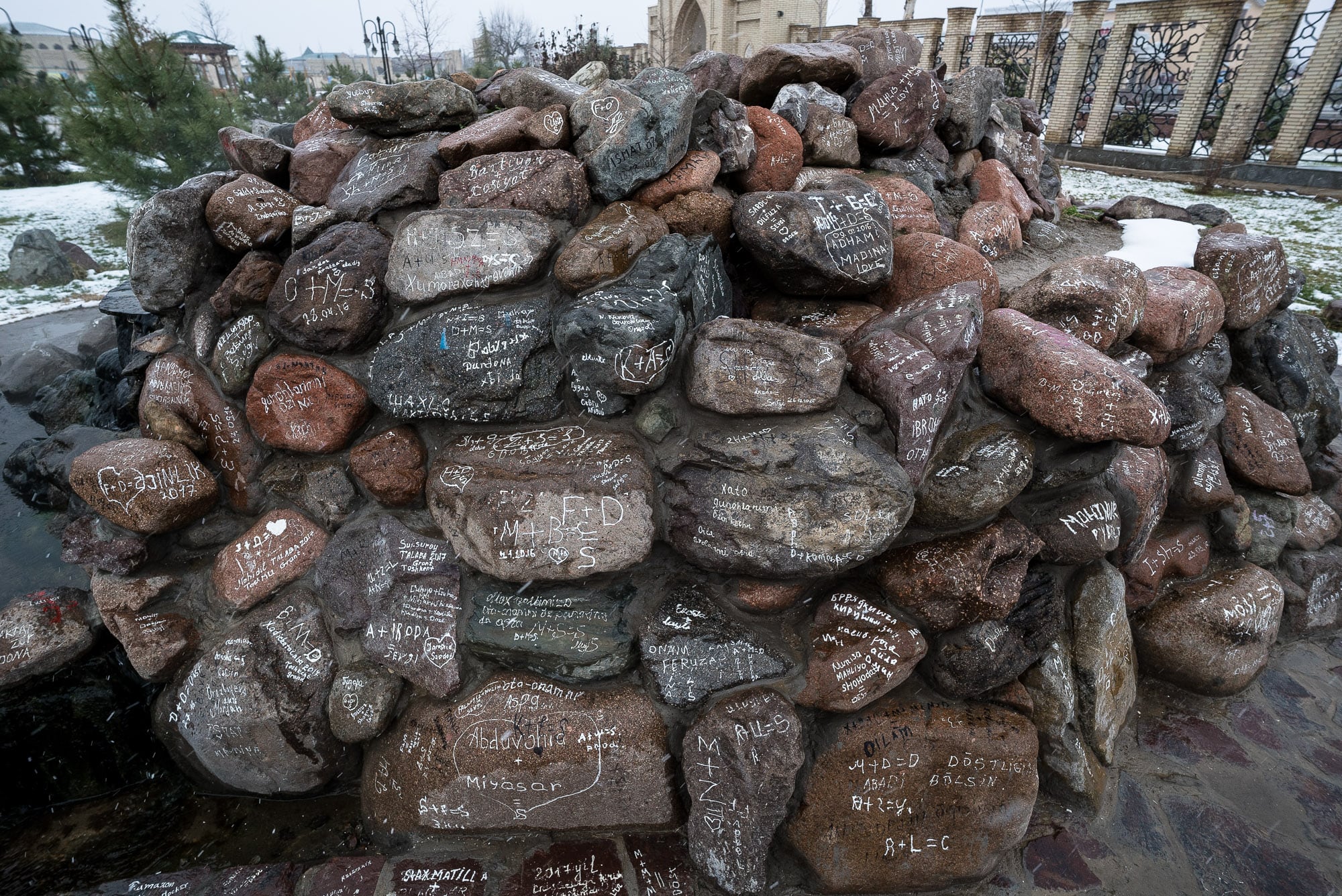 Rocks with what looked like love notes on them: 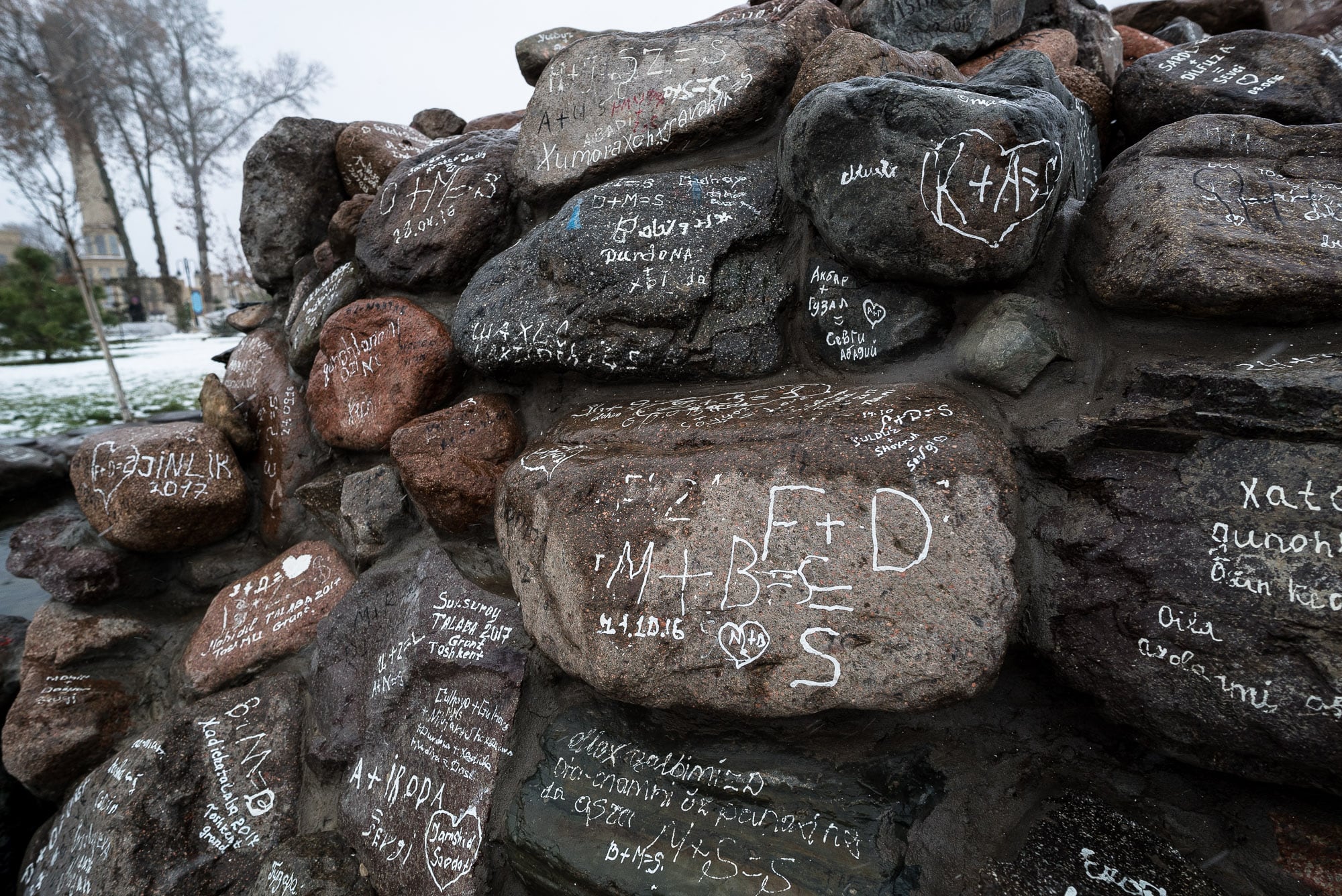 I liked those love notes, and even though it was snowing pretty hard and I couldn’t see much, I also liked the place that they belonged to: 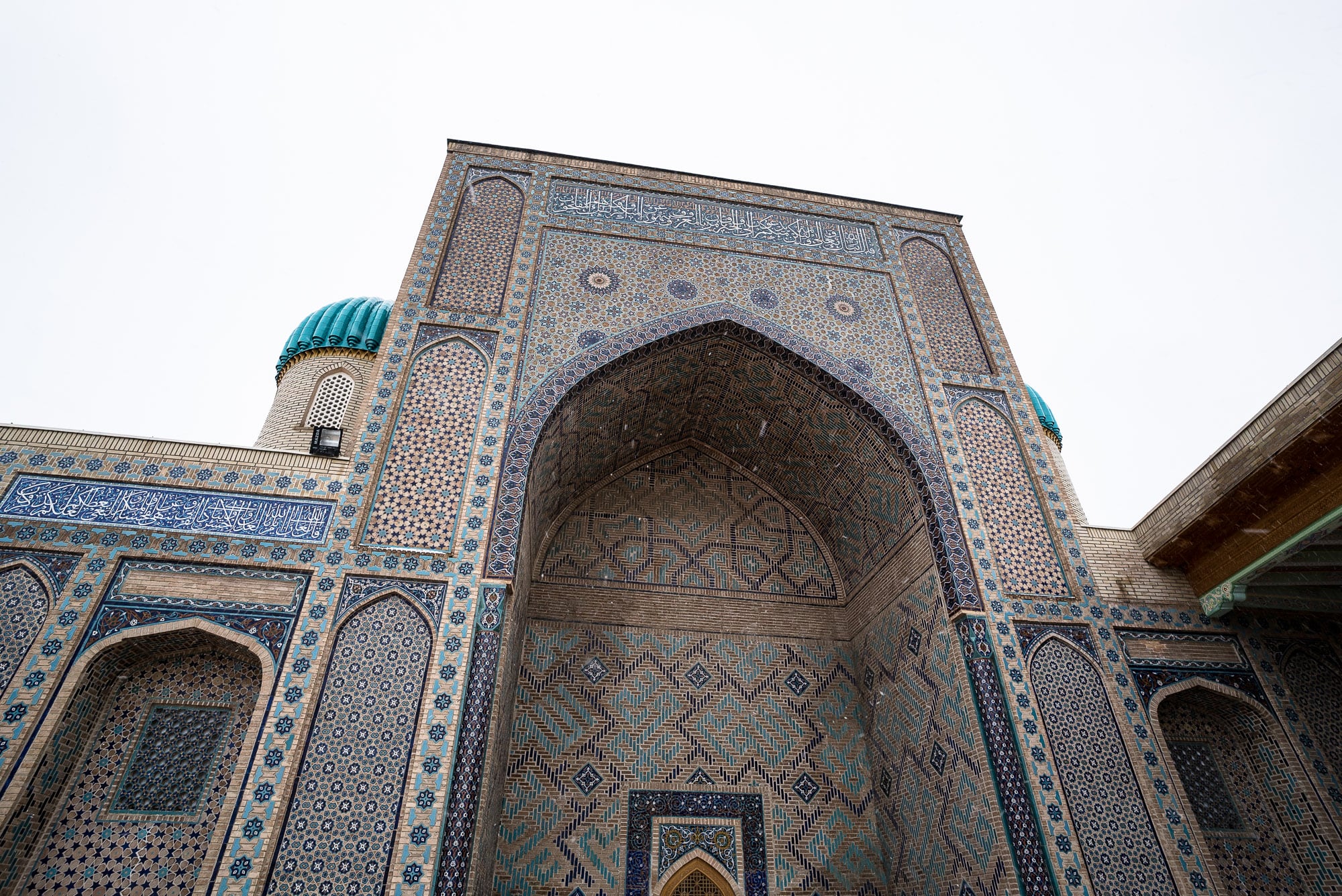 At one point two ladies showed up and demanded a photo: 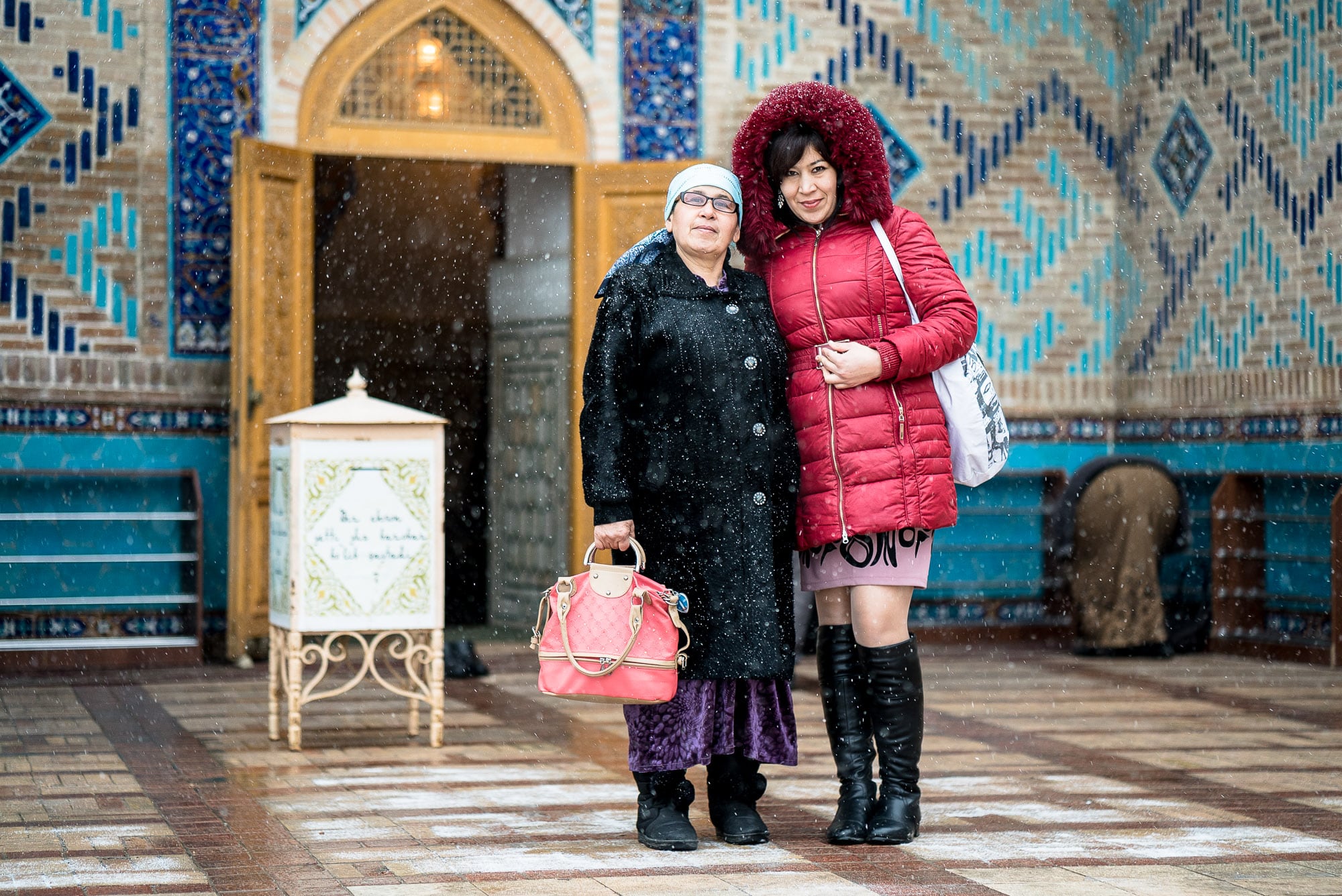 I always enjoy it when people actually want their pictures taken. It makes my life that much easier.

I didn’t stay long, though.

Took some pictures of shoes lined up outside of the doors: 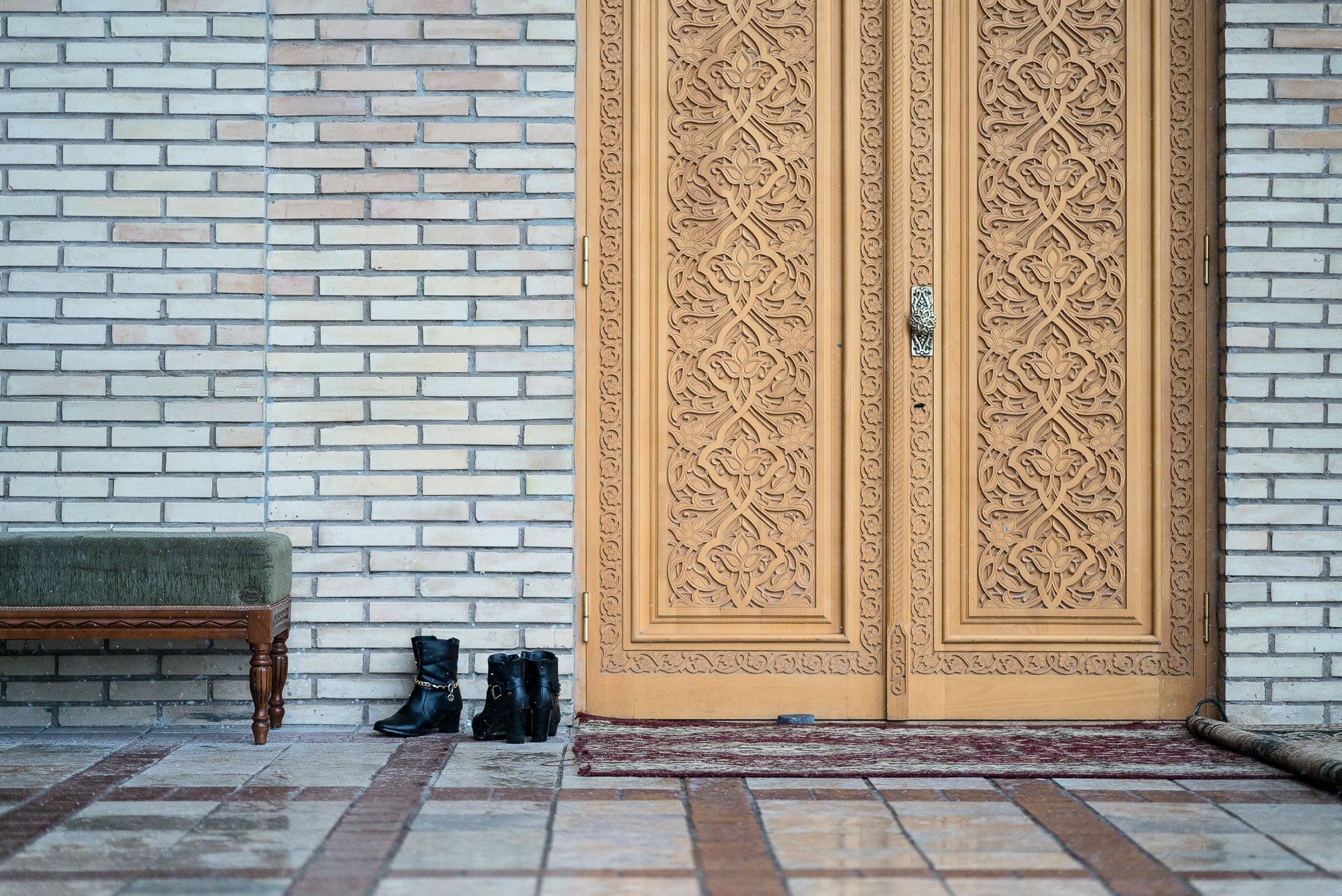 Some pictures of kids running around: 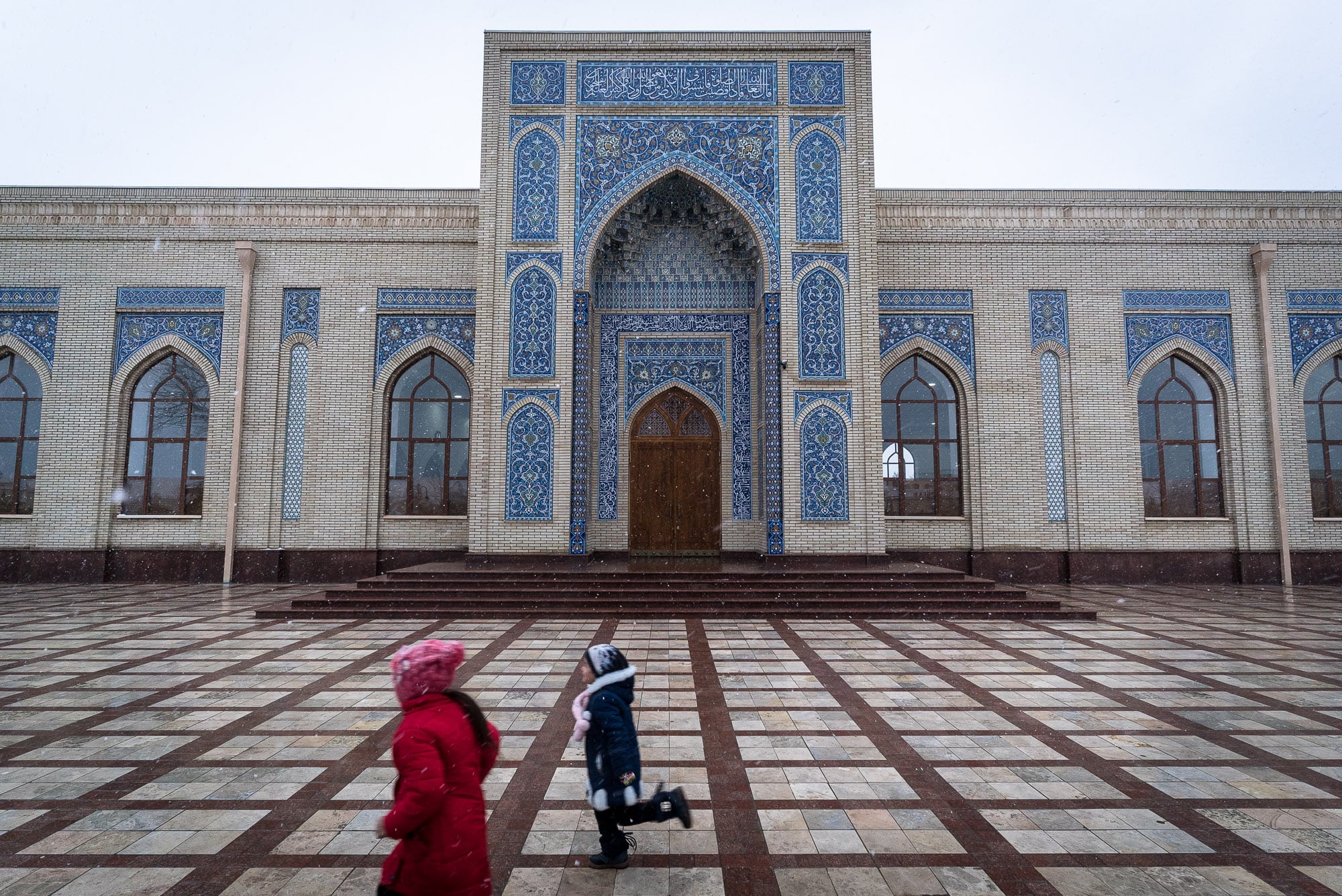 And some pictures of ornaments: 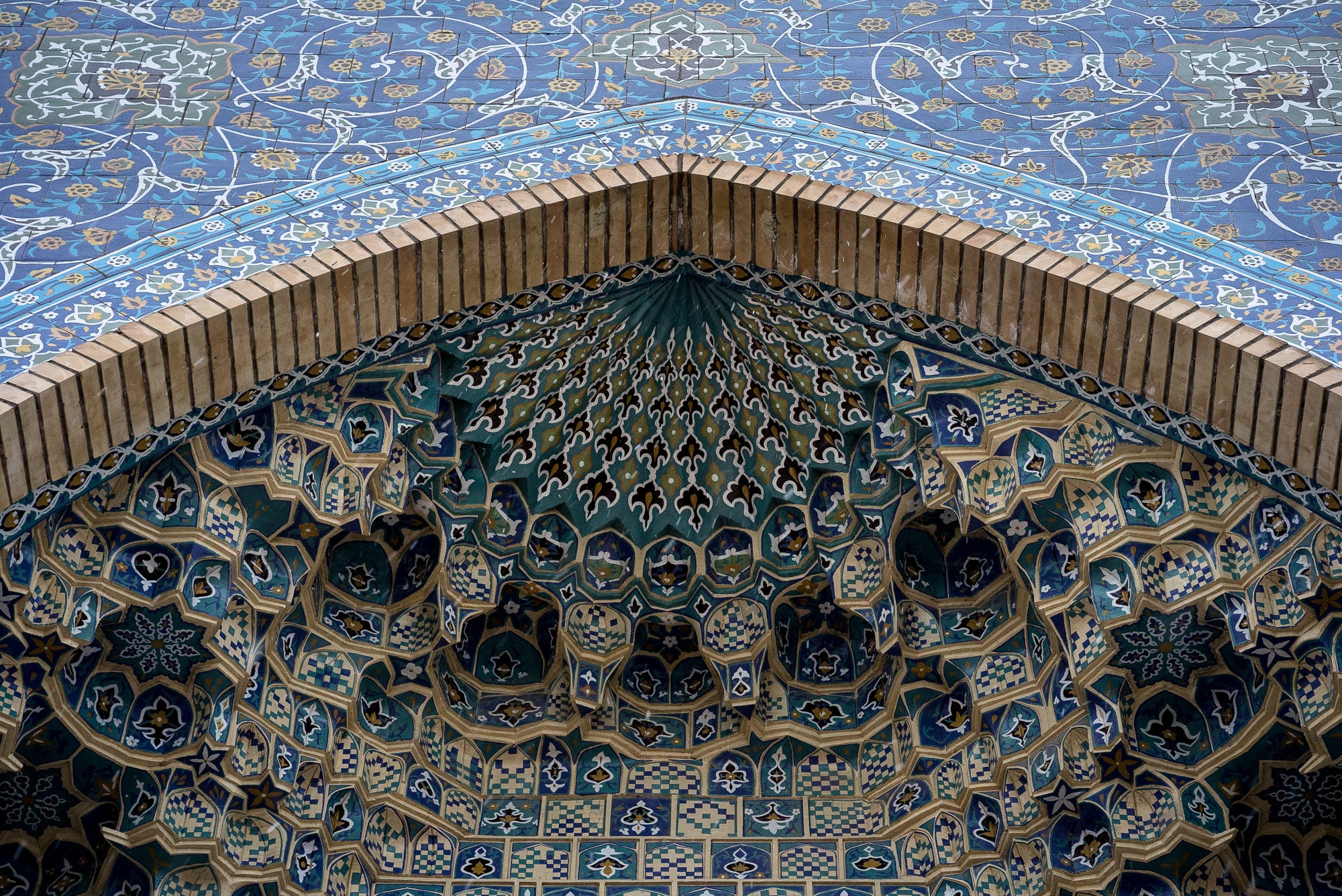 Then I was back on the road: 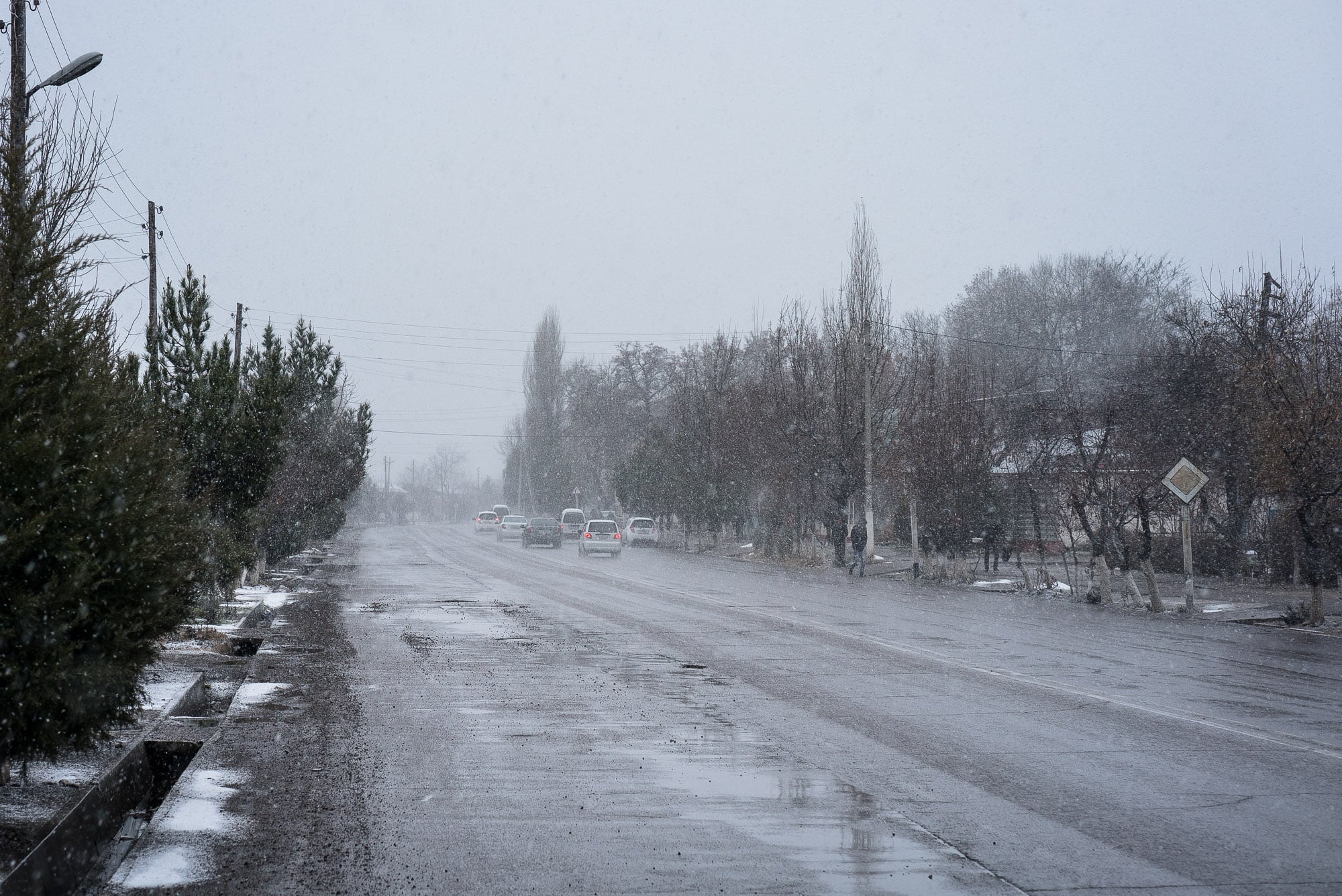 It was quiet walking. We passed parked cars… 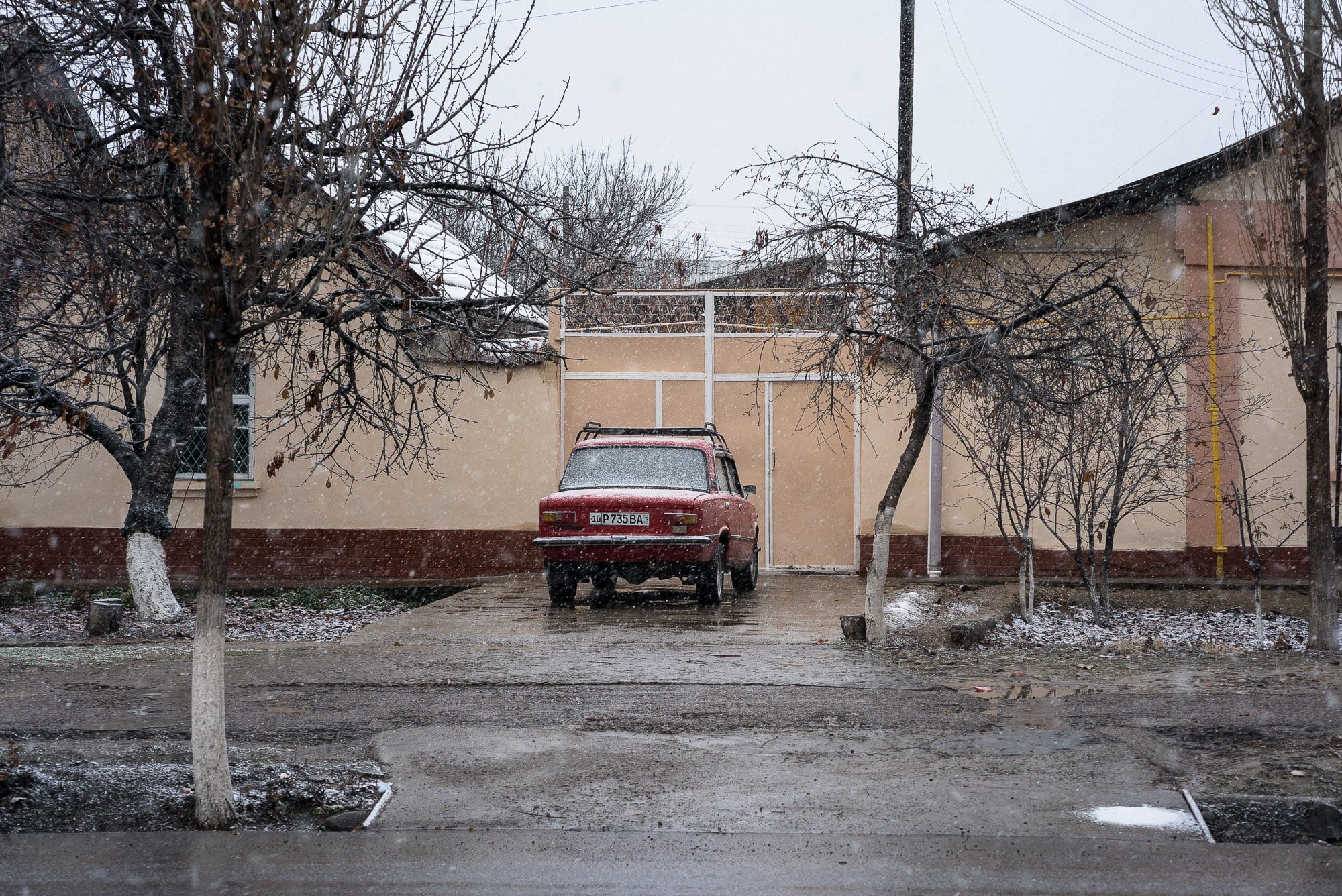 …and the occasional shop that was still operating: 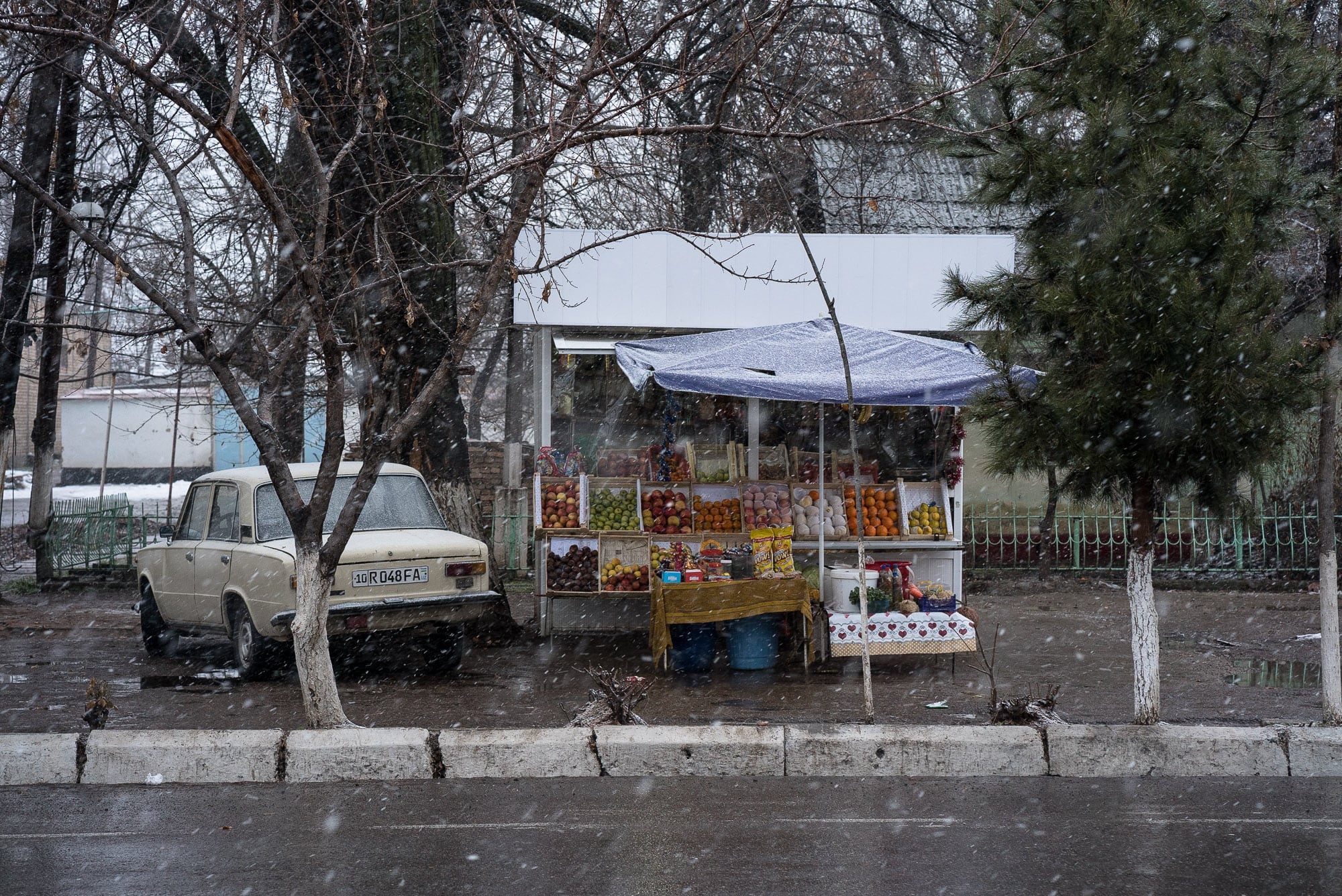 I had the Caboose pose for a picture under a tree: 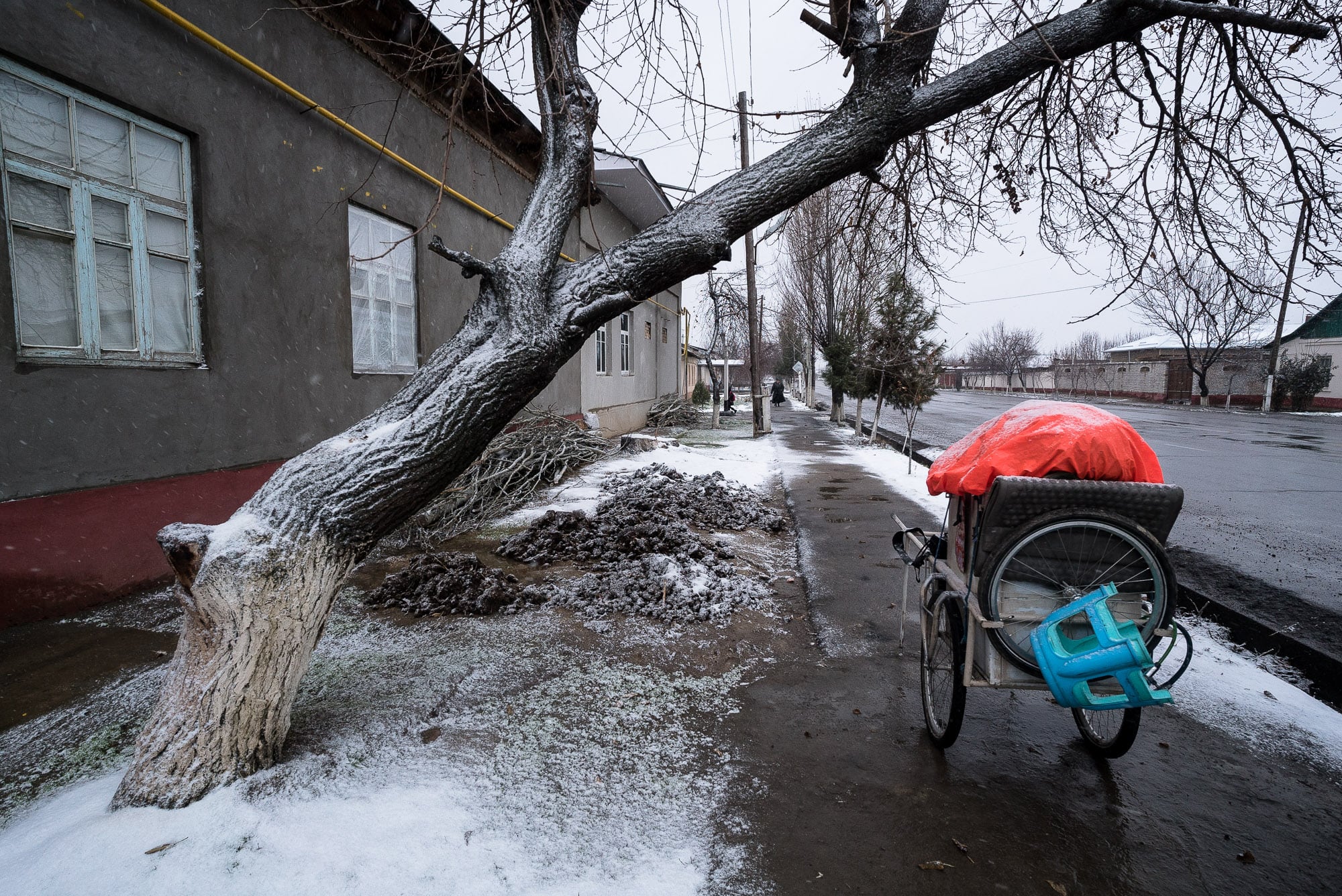 Then we walked into the sunset: 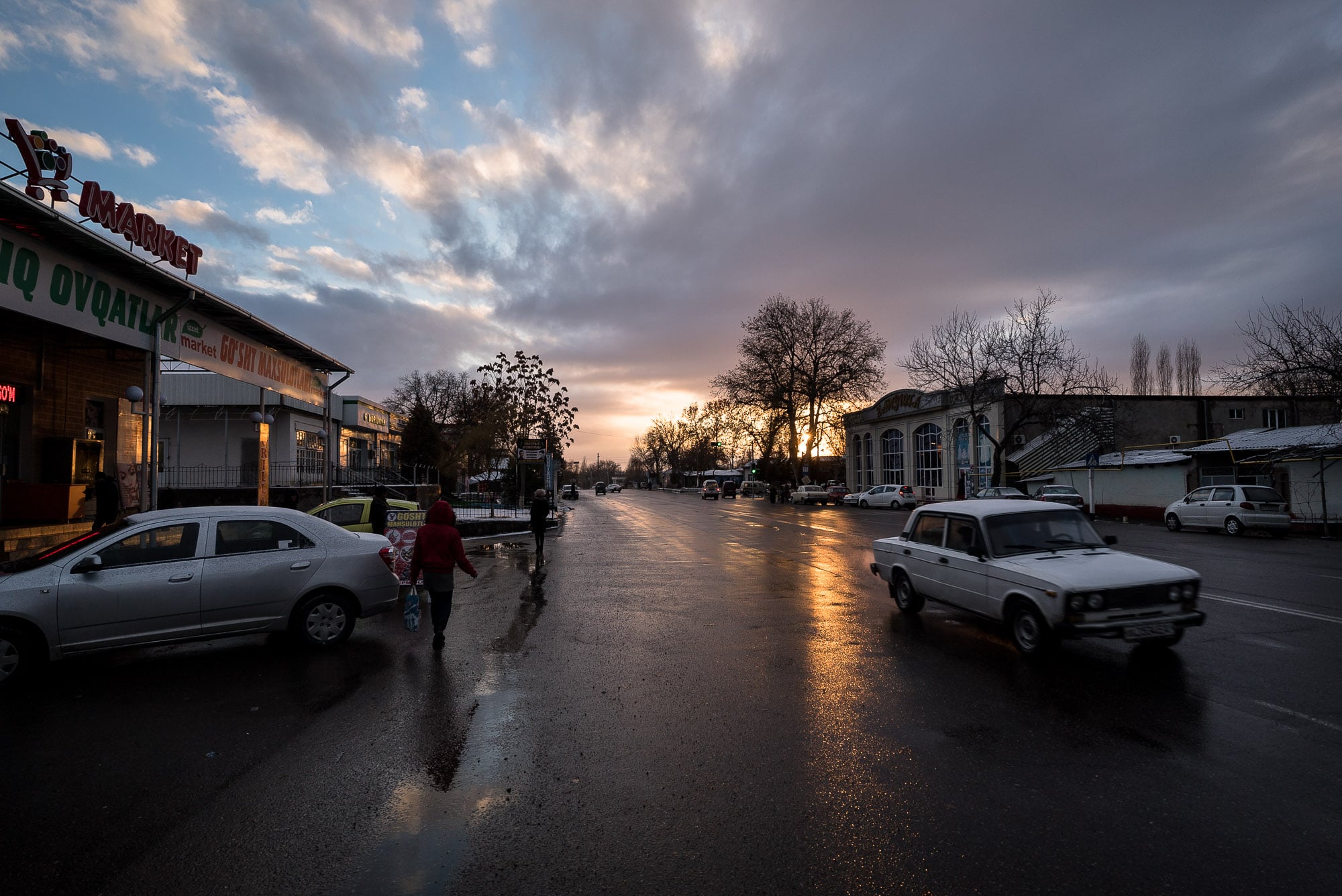 I was glad that the road was not frozen over. It could have easily been a long stretch of ice with all the snow and water on it: 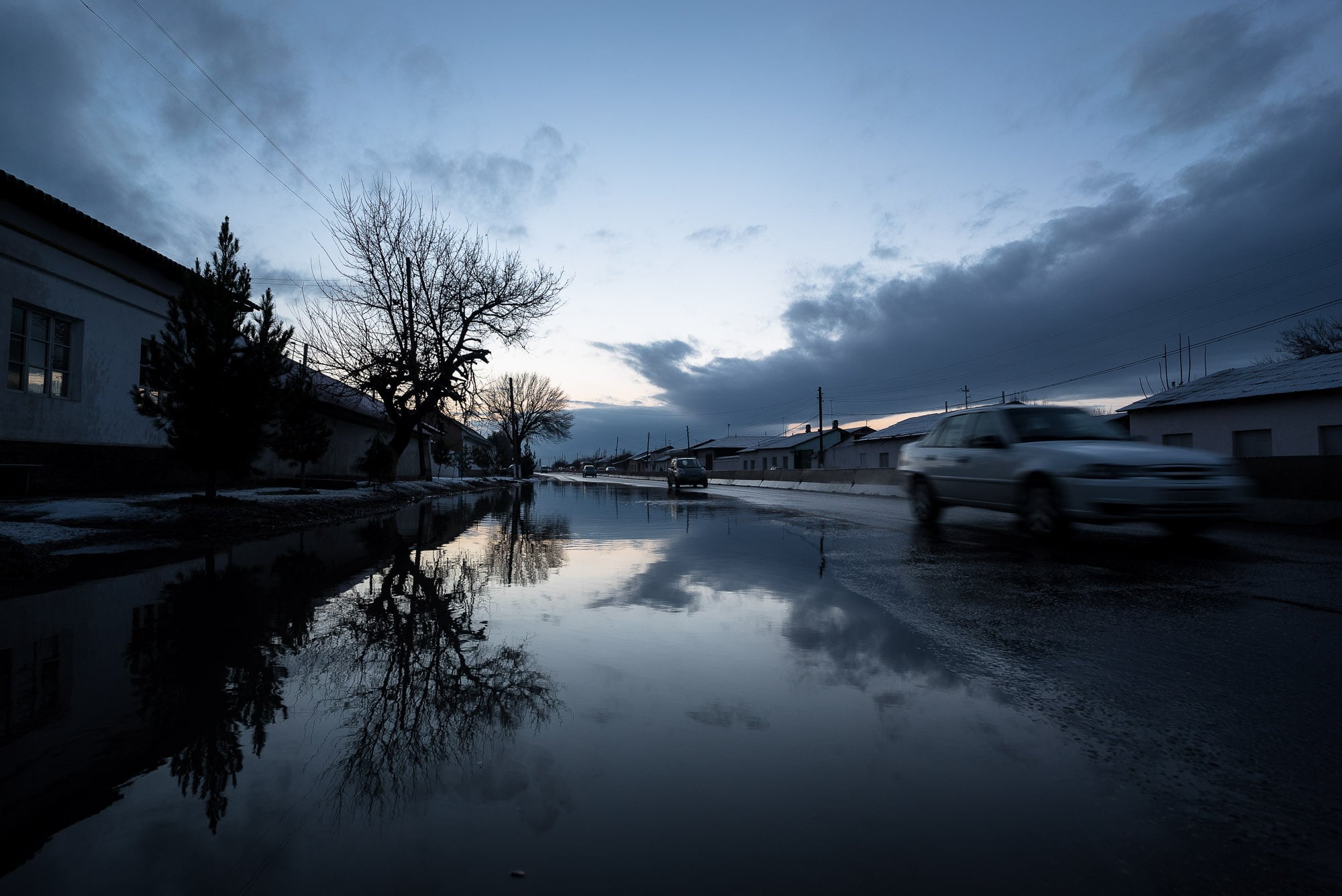 So we kept walking, the Caboose and I.

To the place of her demise.

We came to a hill and a curve in the road. The road was slippery, as it often is in elevated places like that.

I was walking on the left shoulder of the road, so that I would be able to see the cars coming in our direction. I saw two cars, one going slow, the other one going fast, trying to overtake the slow one. I saw it lose control and swerve into our direction.

I took a step to the side, and the car missed me.

But it did not miss the Caboose.

There was a huge sound, and then this: 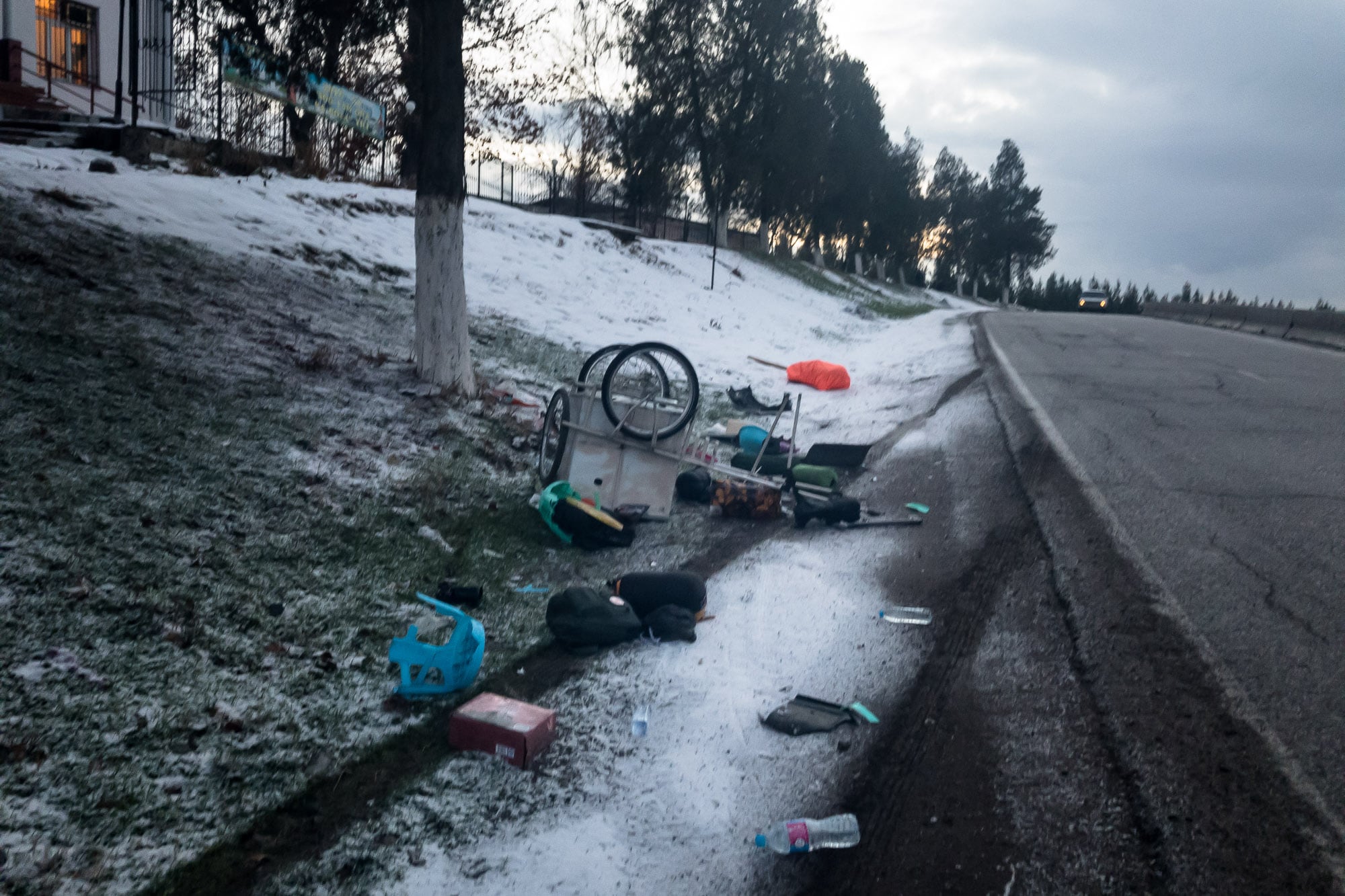 My stuff was scattered everywhere: 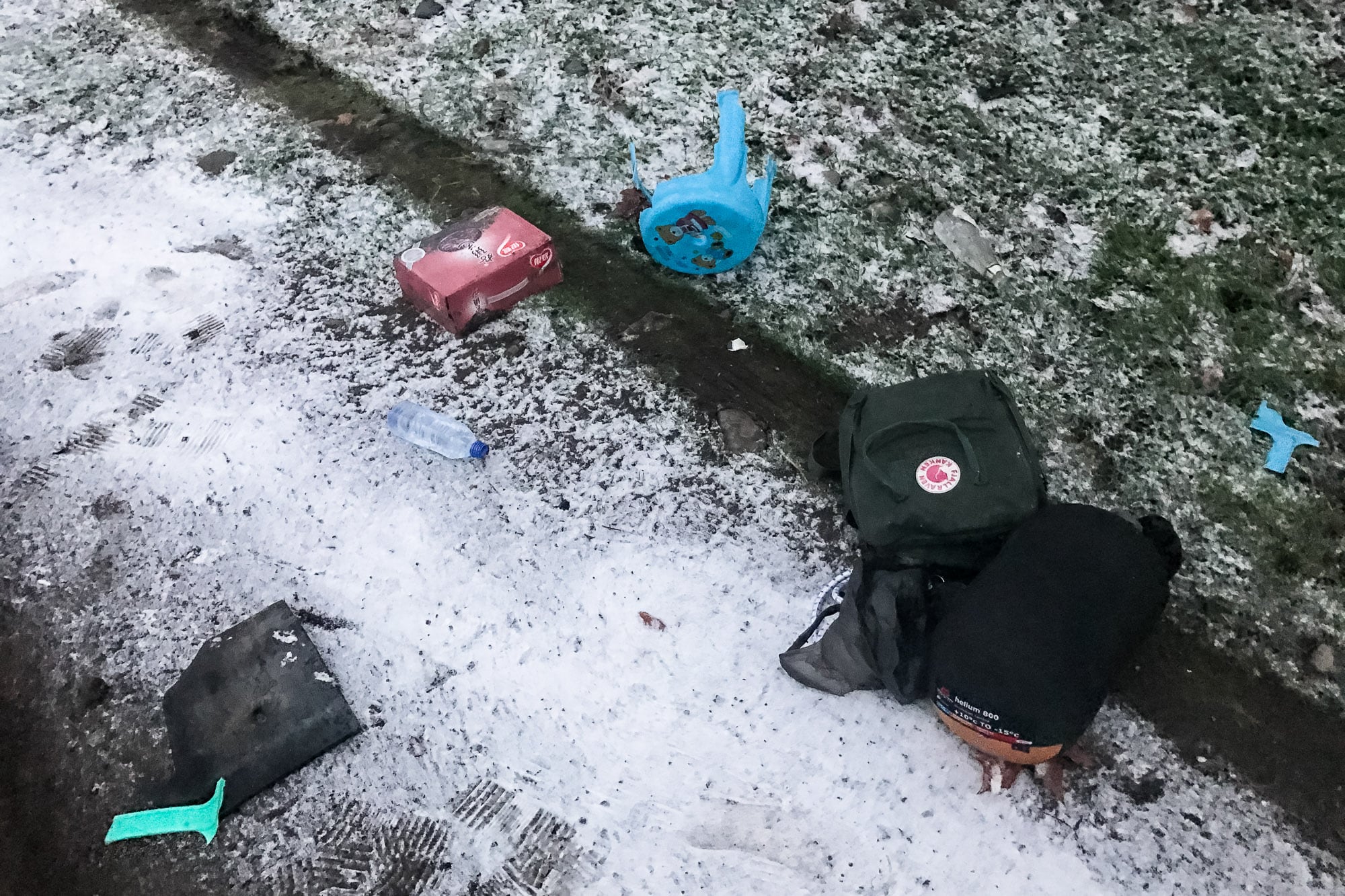 And almost everything was broken one way or the other: 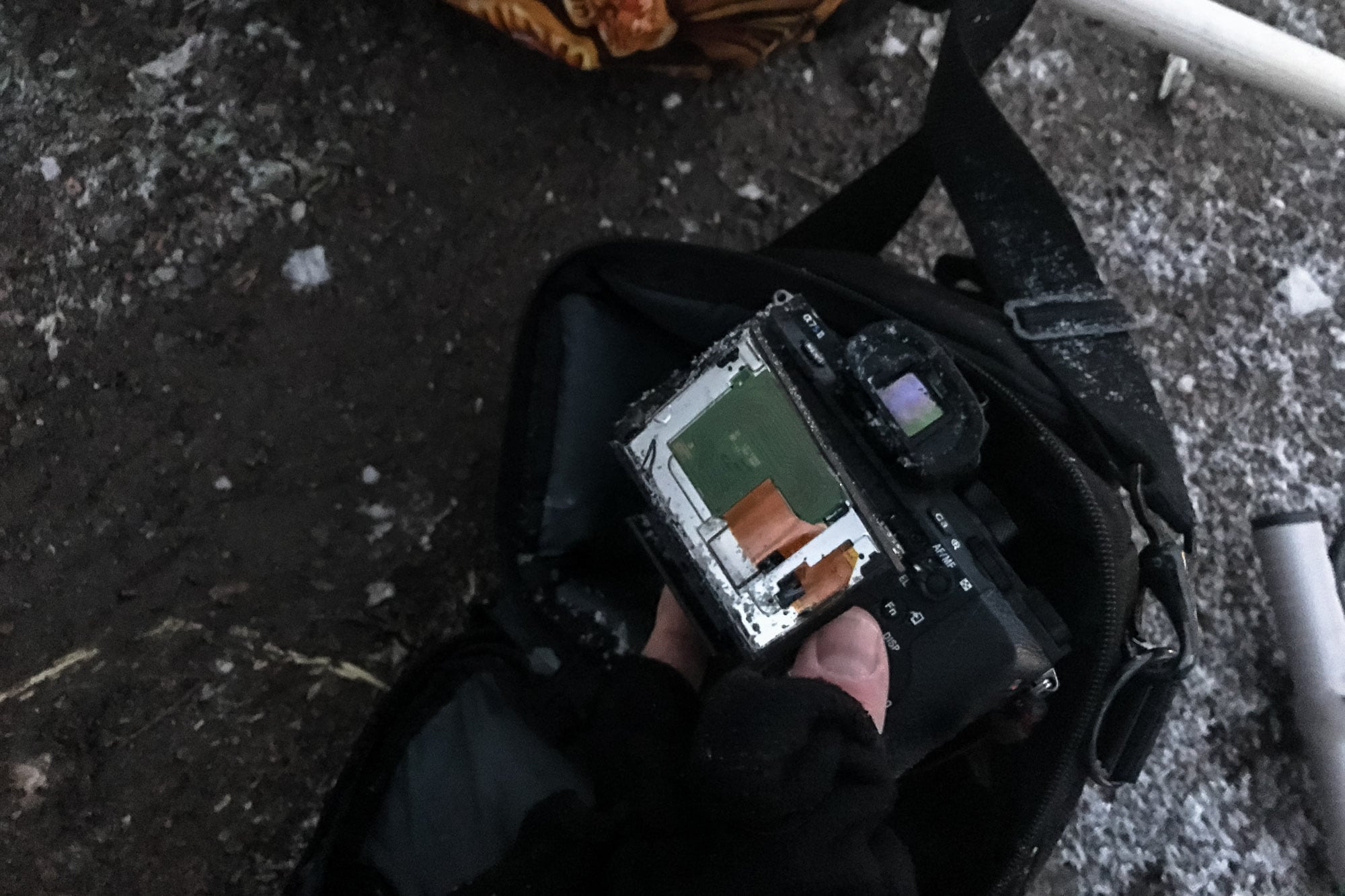 The Caboose had died, but she had not gone without a fight: 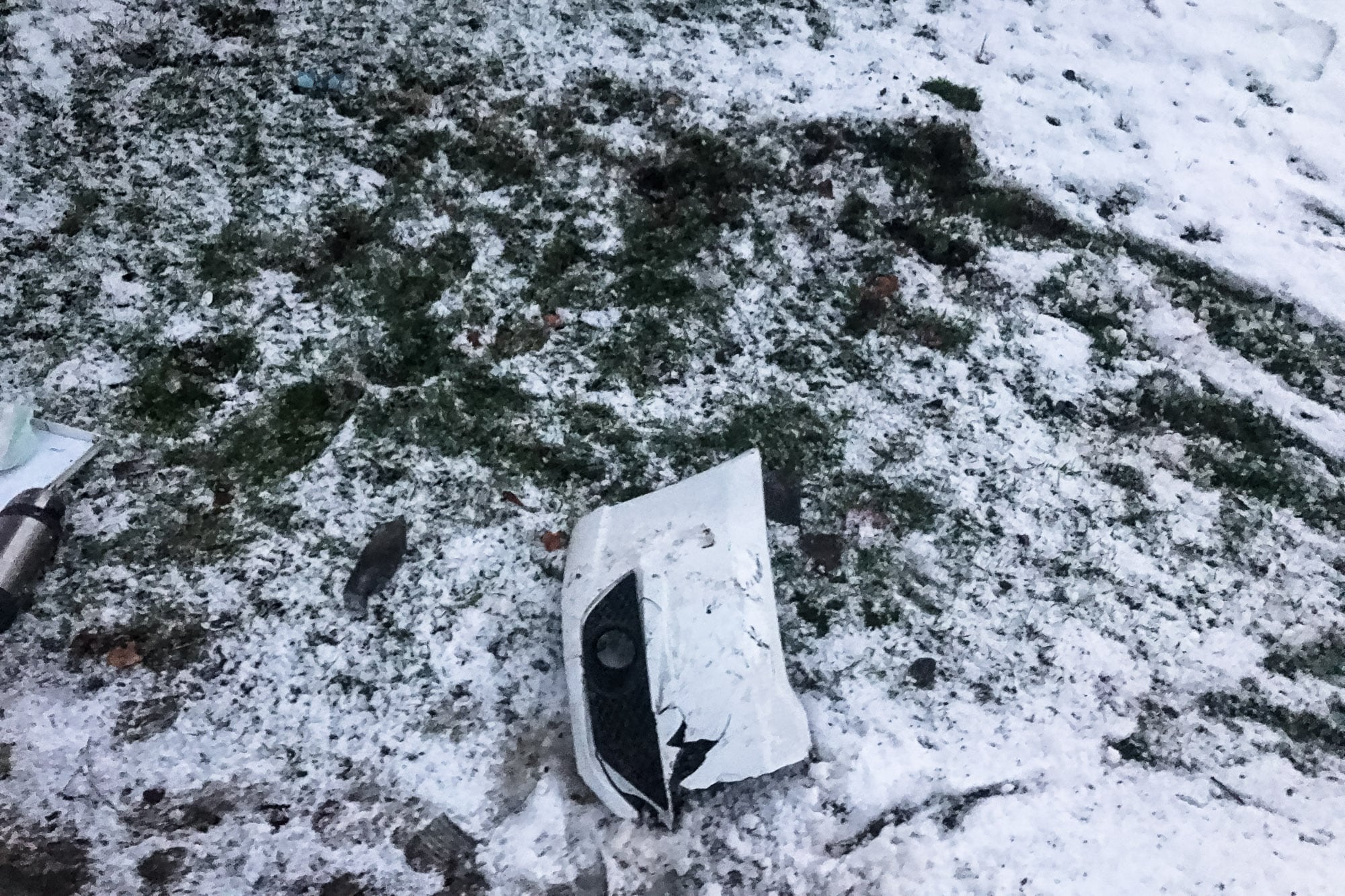 I was mad with anger:

We called the cops, and the cops came after what felt like an hour. But they did come. And they asked questions. And they measured things. And they wrote down a whole bunch of stuff.

Remember I told you that there had been two cars, one being overtaken by the other? Well, the driver of the slow car had witnessed the accident, so he had stopped as well. His name was Shakh, and he spoke excellent English.

He offered to load the Caboose into his car and take us back to Tashkent:

So we went back: 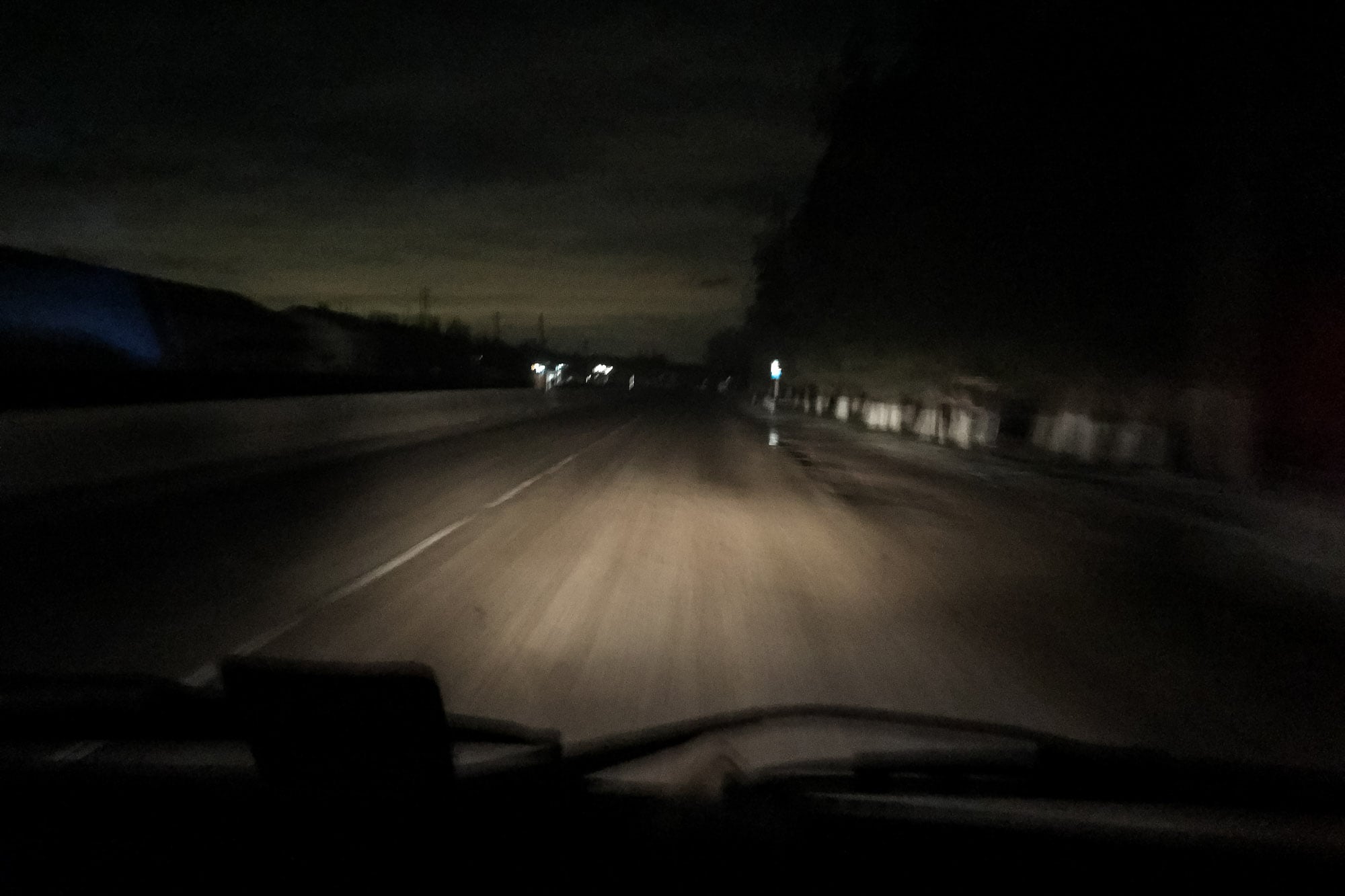 And when we arrived, we had come to the conclusion that I was in fact very lucky not to have been destroyed by the car myself. So we went to a restaurant and had a celebratory dinner: 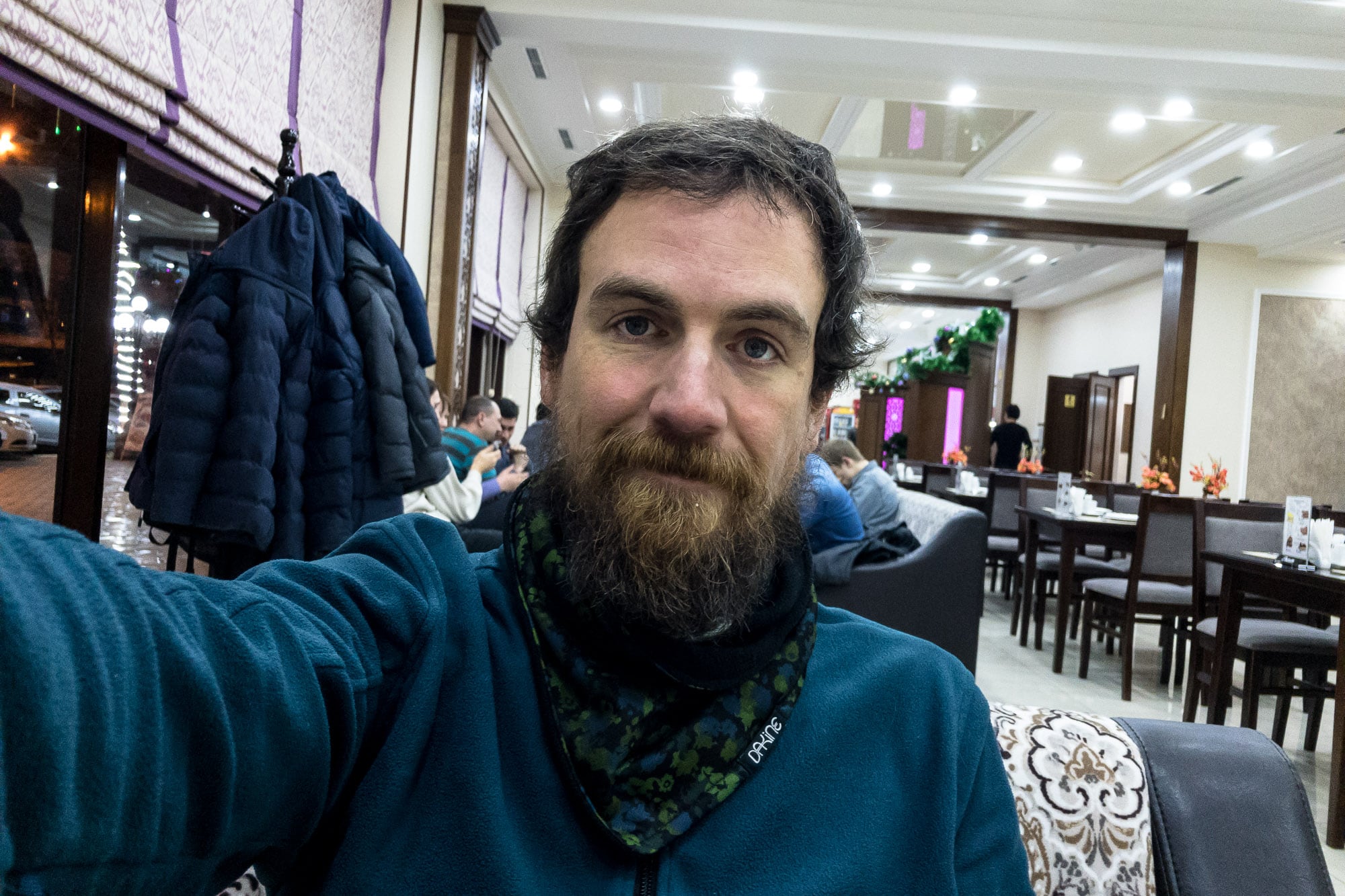 I know there should have been a photo of Shakh here, but I think I was still in a state of shock so I forgot to take a picture of him.

He is here in this video though:

Thanks Shakh, and Merry Fucking Christmas!

Day 603
from Tashkent to ground zero