Woke up and brushed my teeth next to the road: 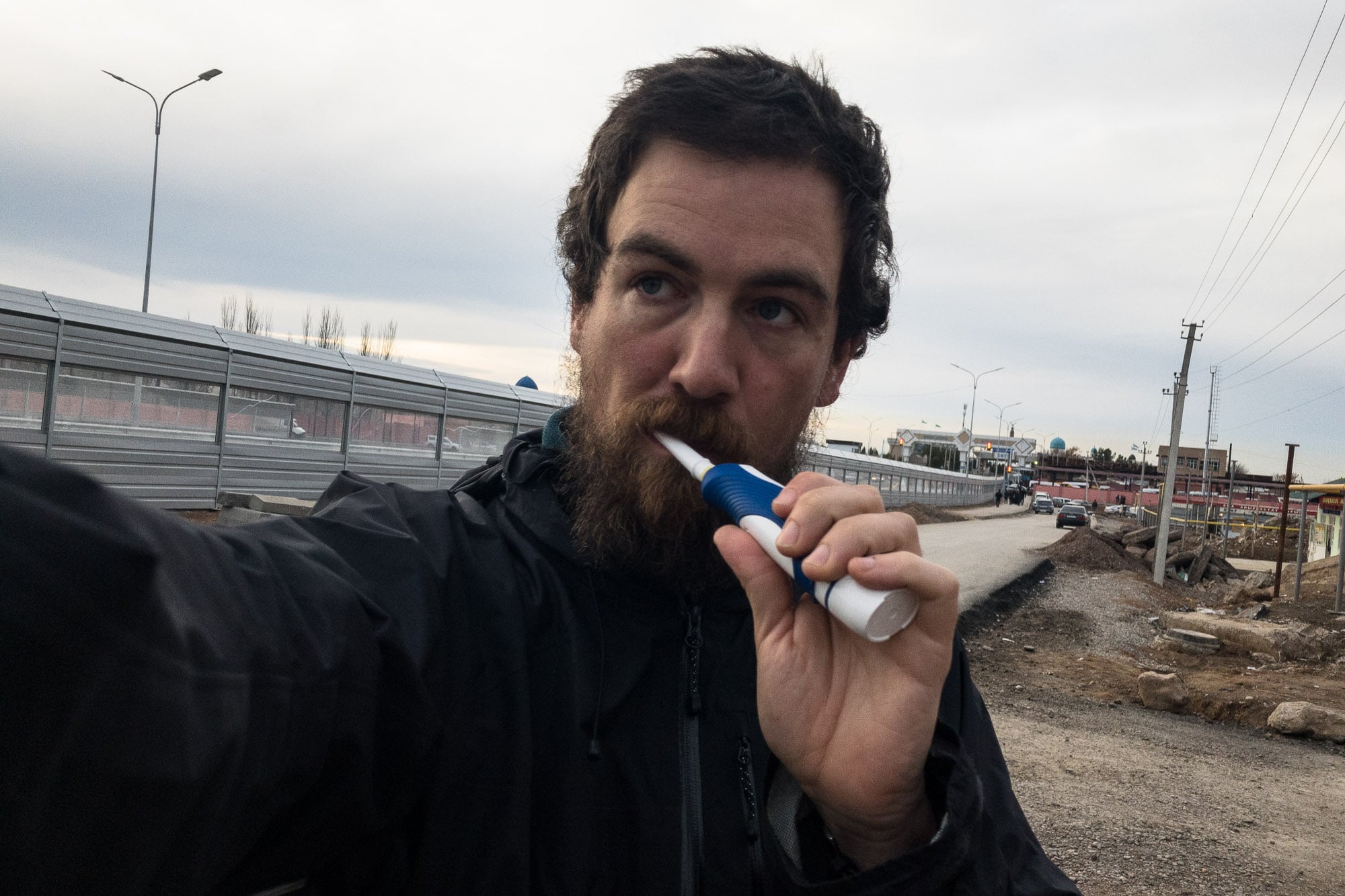 You can see the border to Uzbekistan right be hind me.

Then I changed some Uzbek money and got this ridiculously large wad of cash: 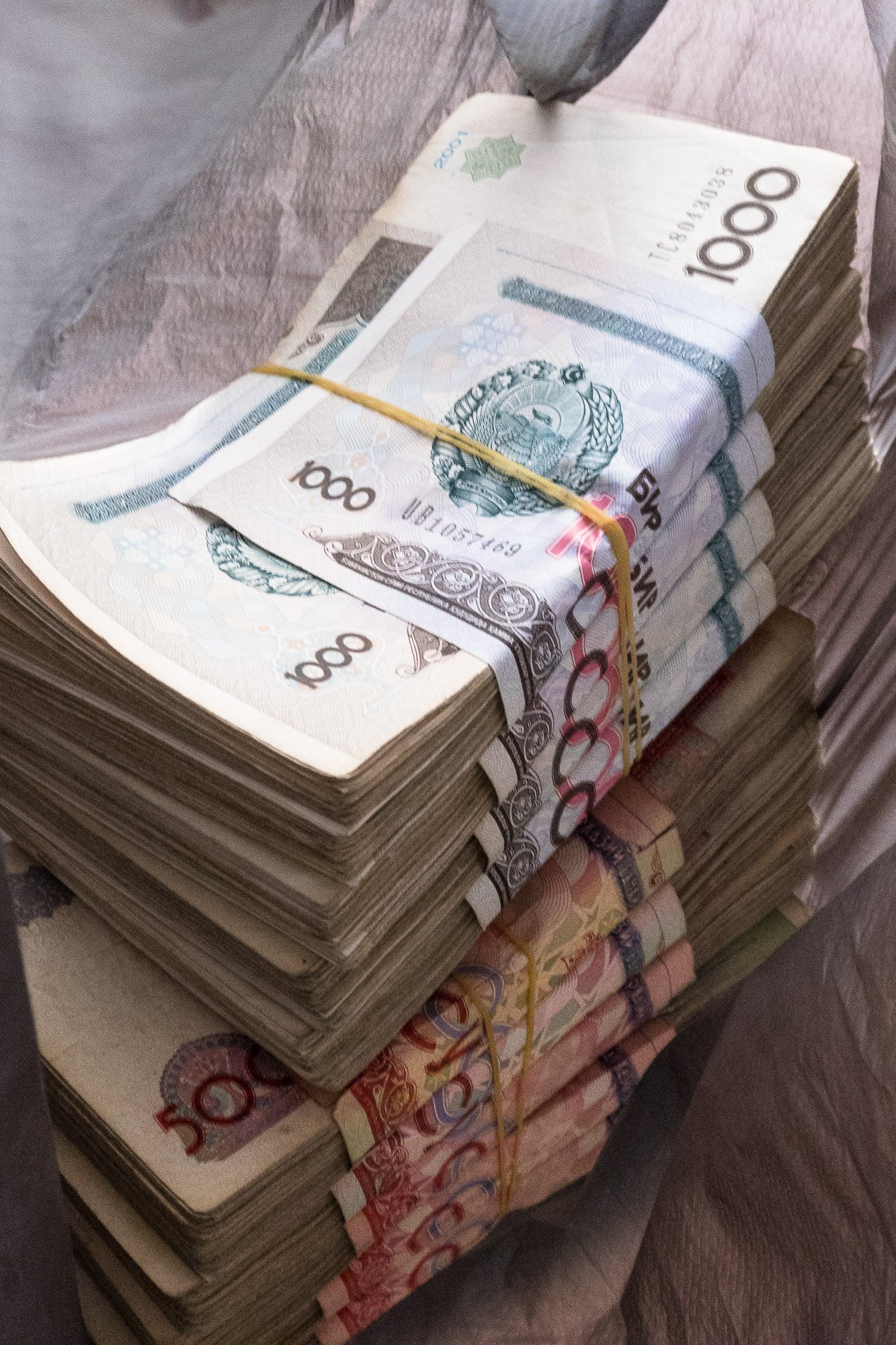 Inflation is the name of the game.

Had some cookies and some ice-tea, watched some “Modern Family” on my phone in my room. And waited.

I was waiting for these guys: 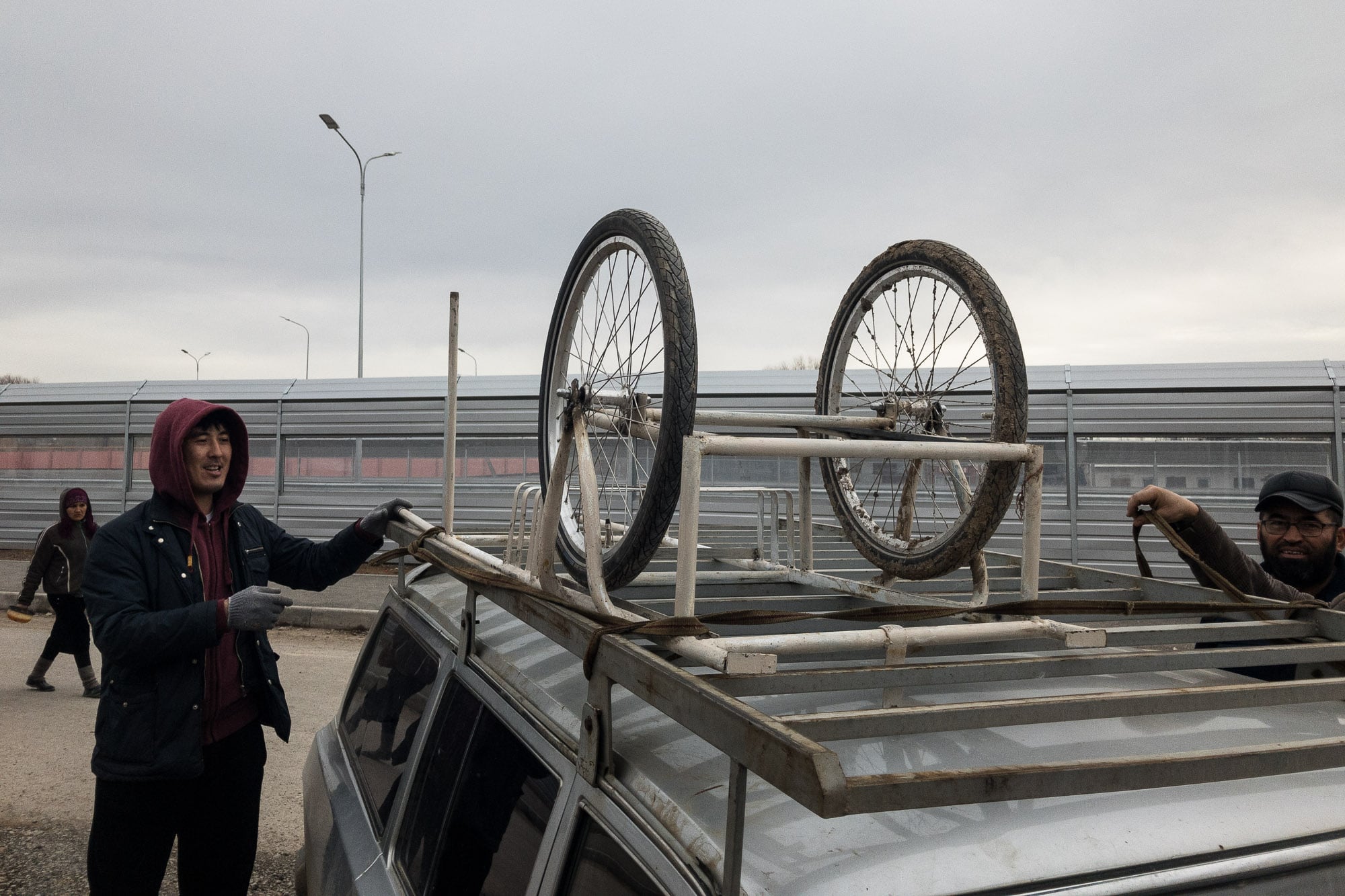 I had found them last night through the owner of the guesthouse where I was staying. They had taken the Caboose away and fixed her: 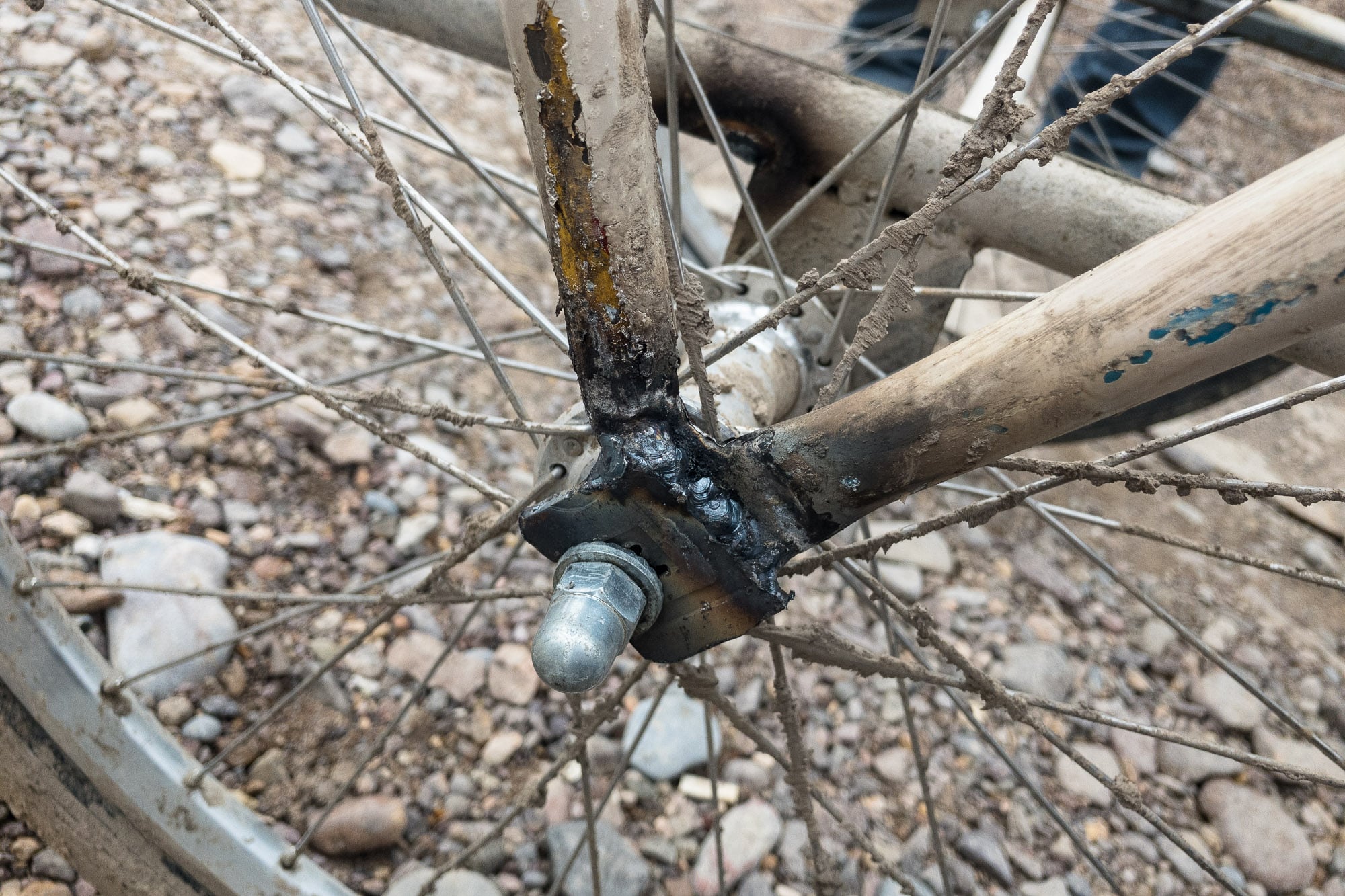 Fixed her in more than one place actually: 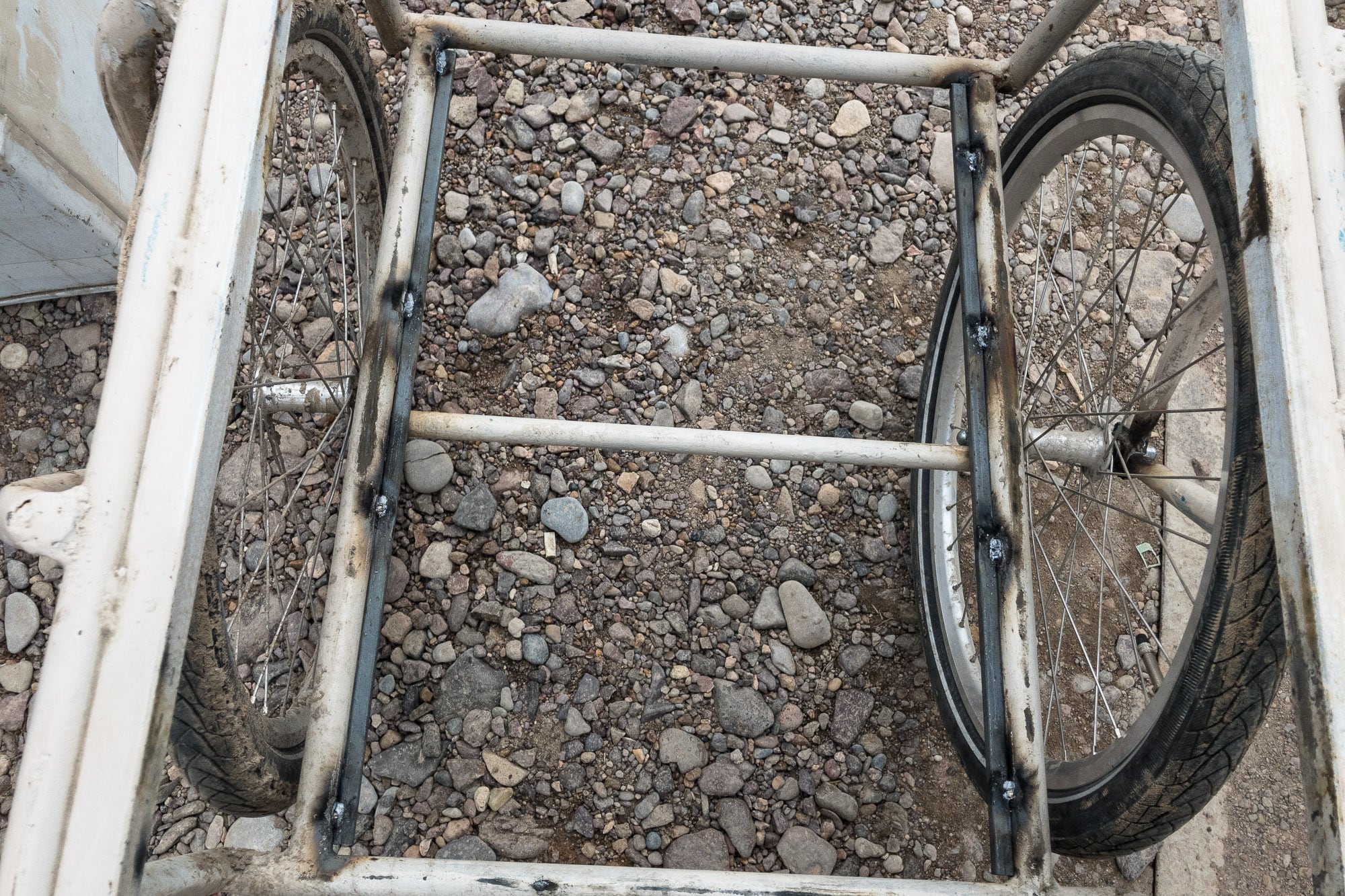 We took a selfie: 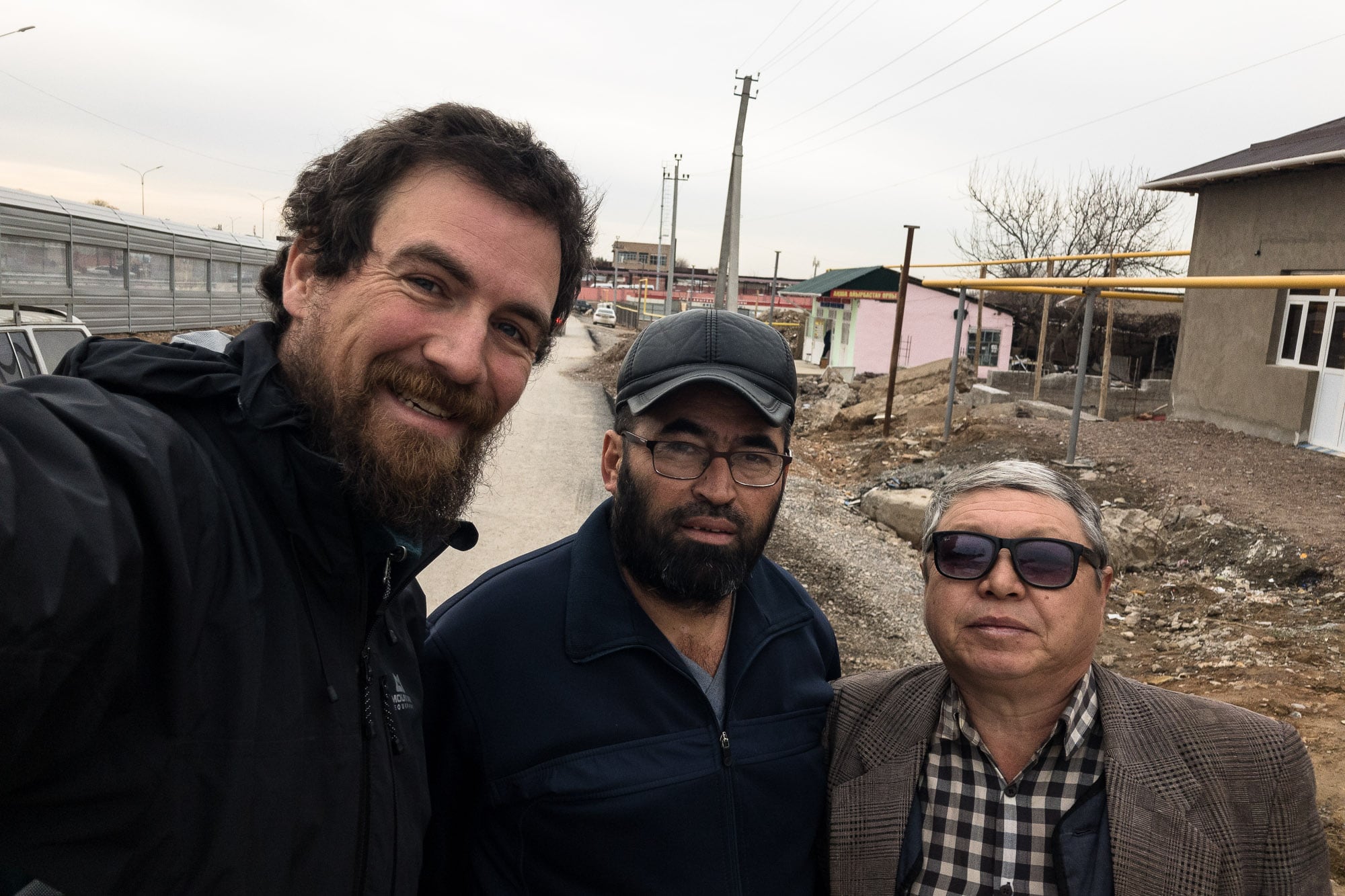 Then I loaded up the Caboose: 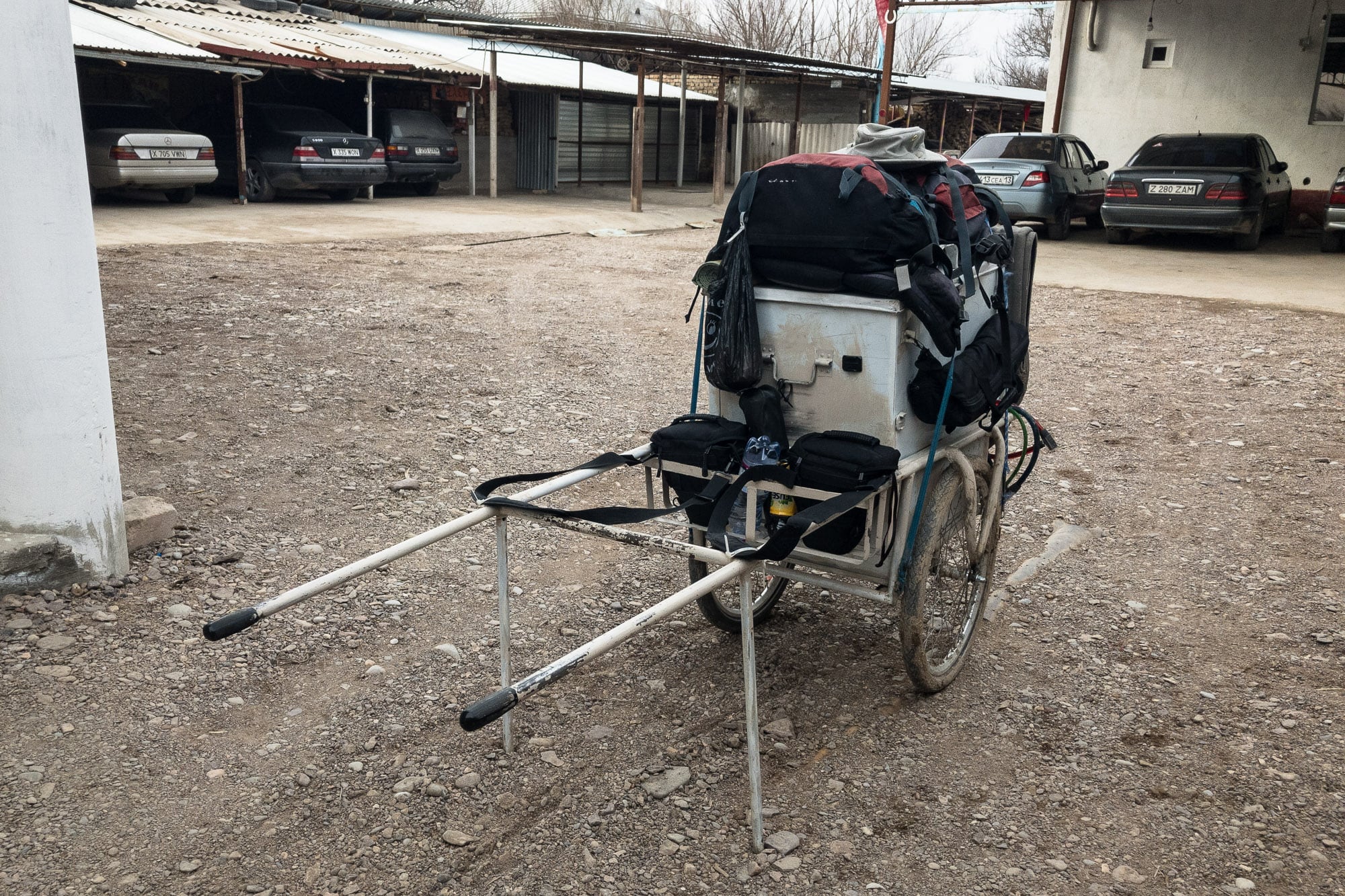 And took another selfie with the dudes from the guesthouse: 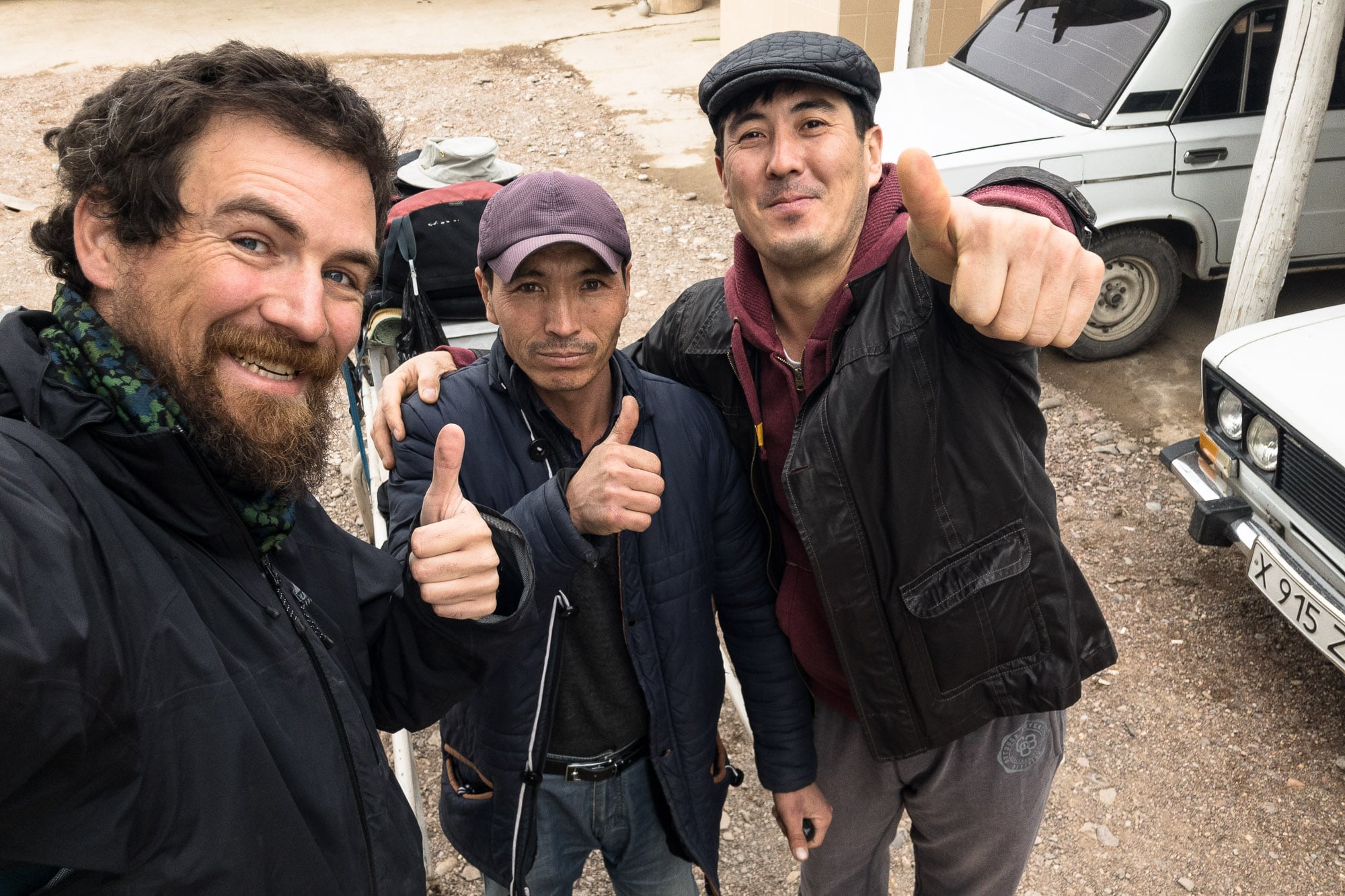 Then I went to the border.

I was a bit worried, but what could I do? There was only one way to go: forward.

A lady helped me fill out my customs form for a bit of money: 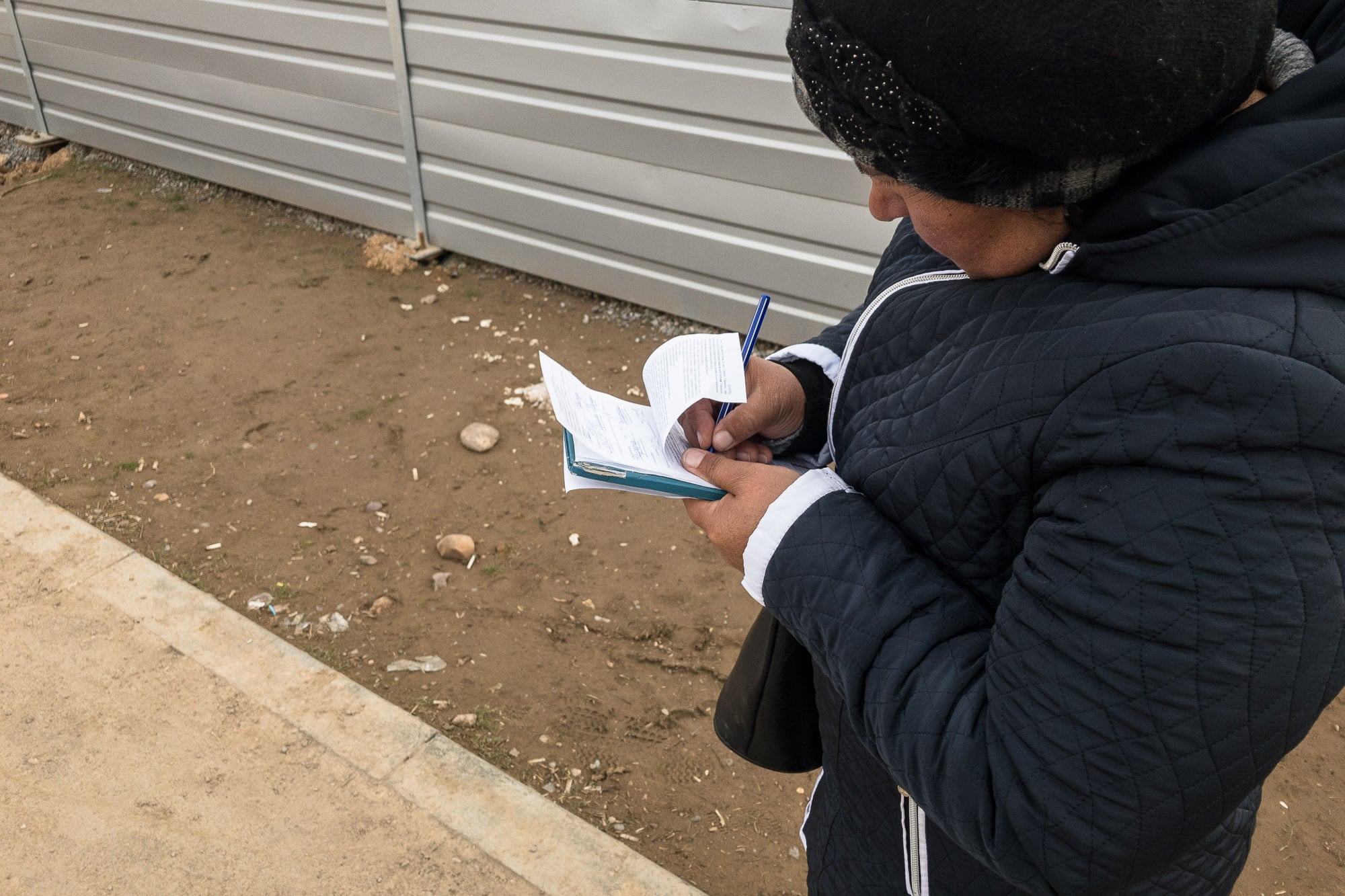 Then I went through the border. Had to show my passport a dozen times to a dozen different people. Had to unload the Caboose completely and put everything that was in her through an x-ray machine. Had three friendly Uzbek border guards help me lift the Caboose over a fence when she was too fat to fit any other way. And then I was through.

I stepped out on the road, passed some people who were surprised that I didn’t want a cab.

Then I knelt down on Uzbek ground. I figured if the Pope could do it, so could I.

The road was quiet and clean: 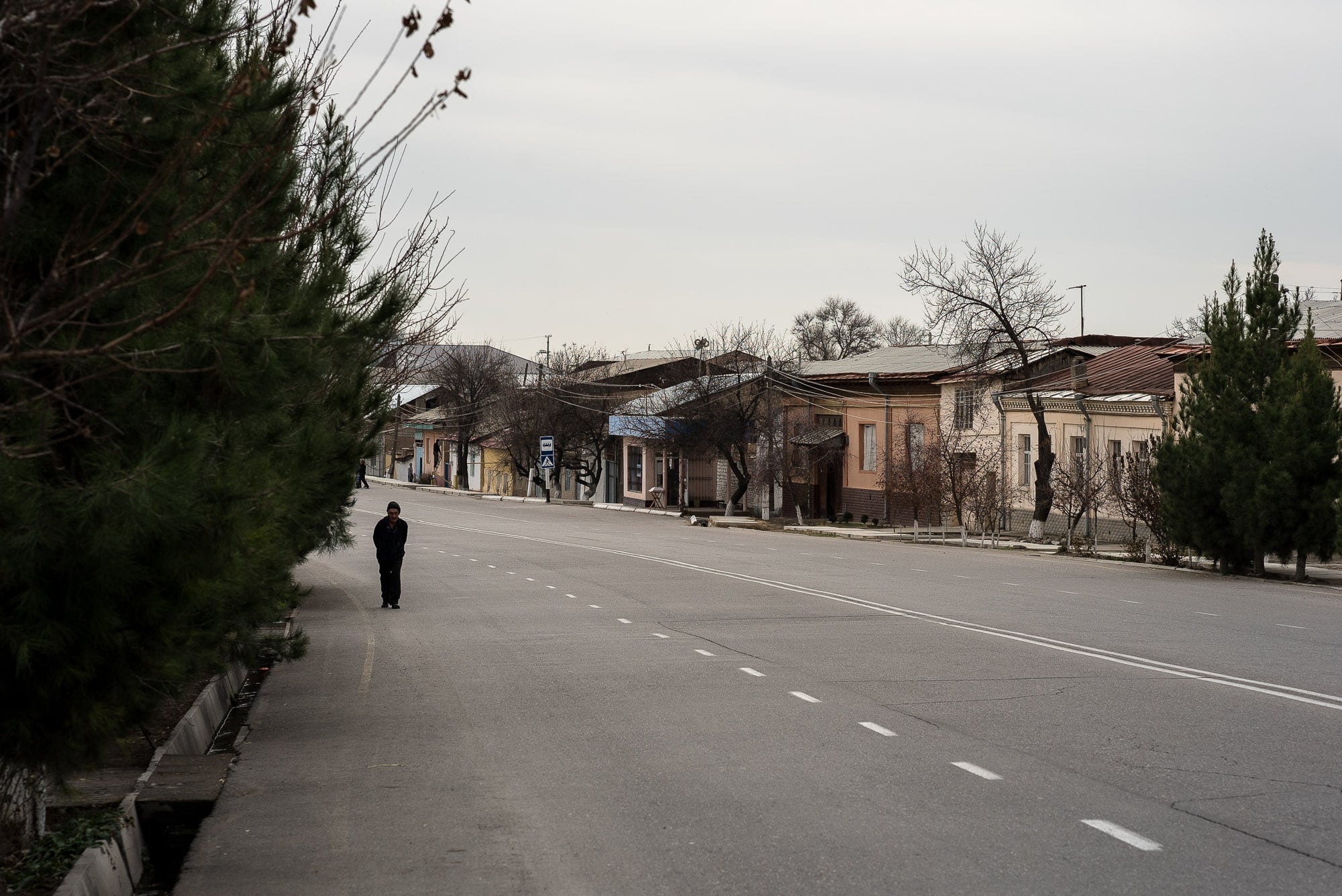 There were lots of liquor stores… 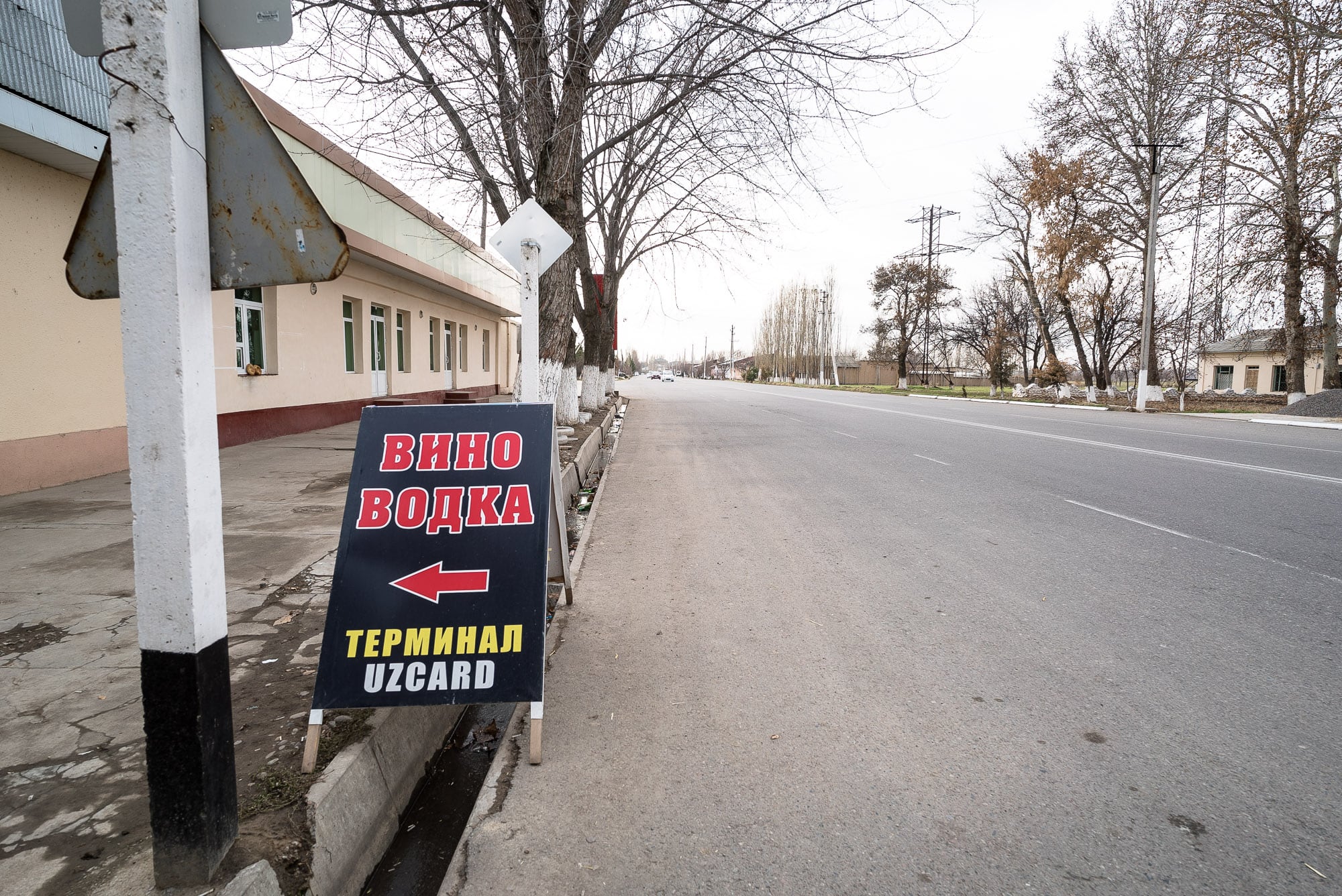 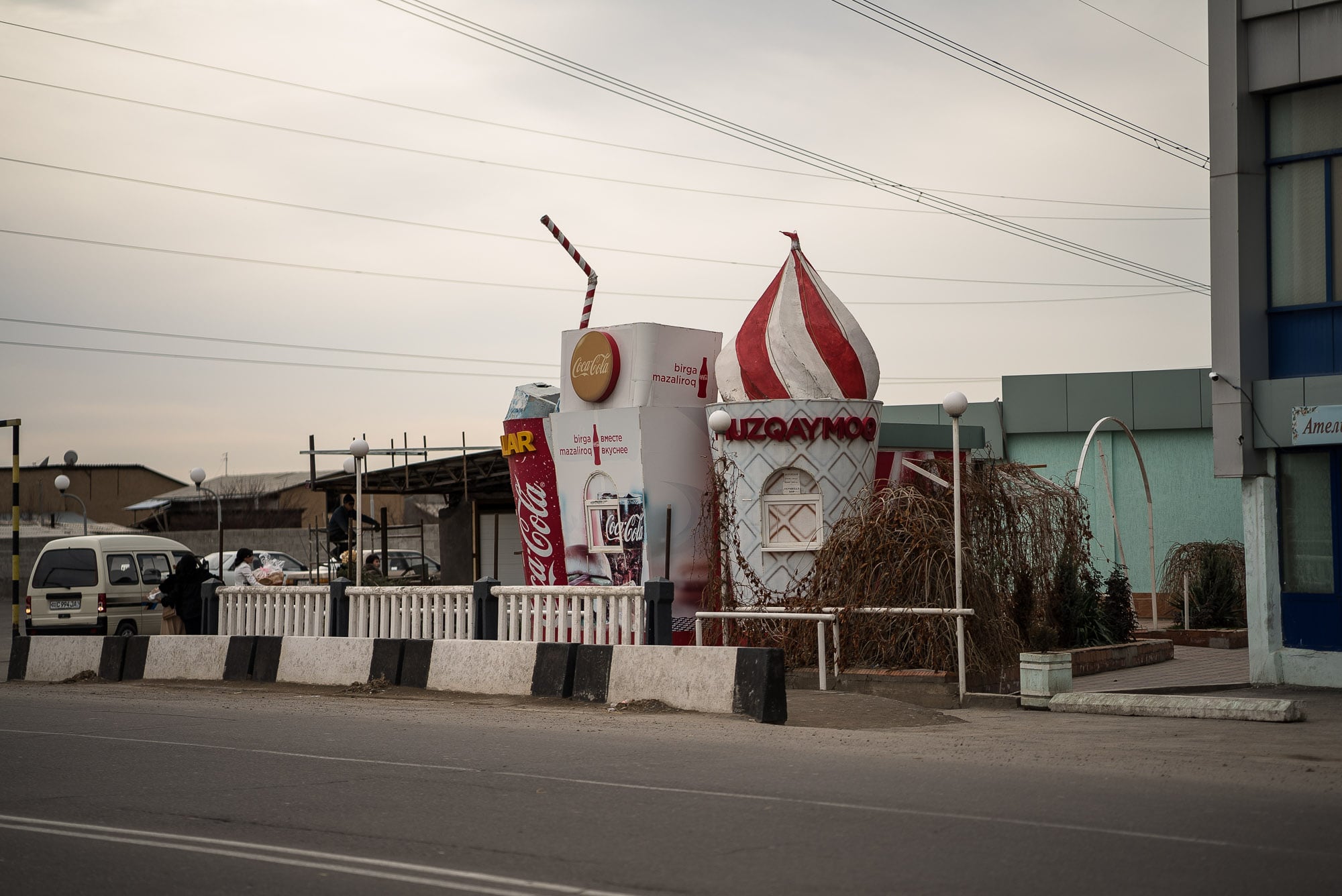 …and some pretty houses: 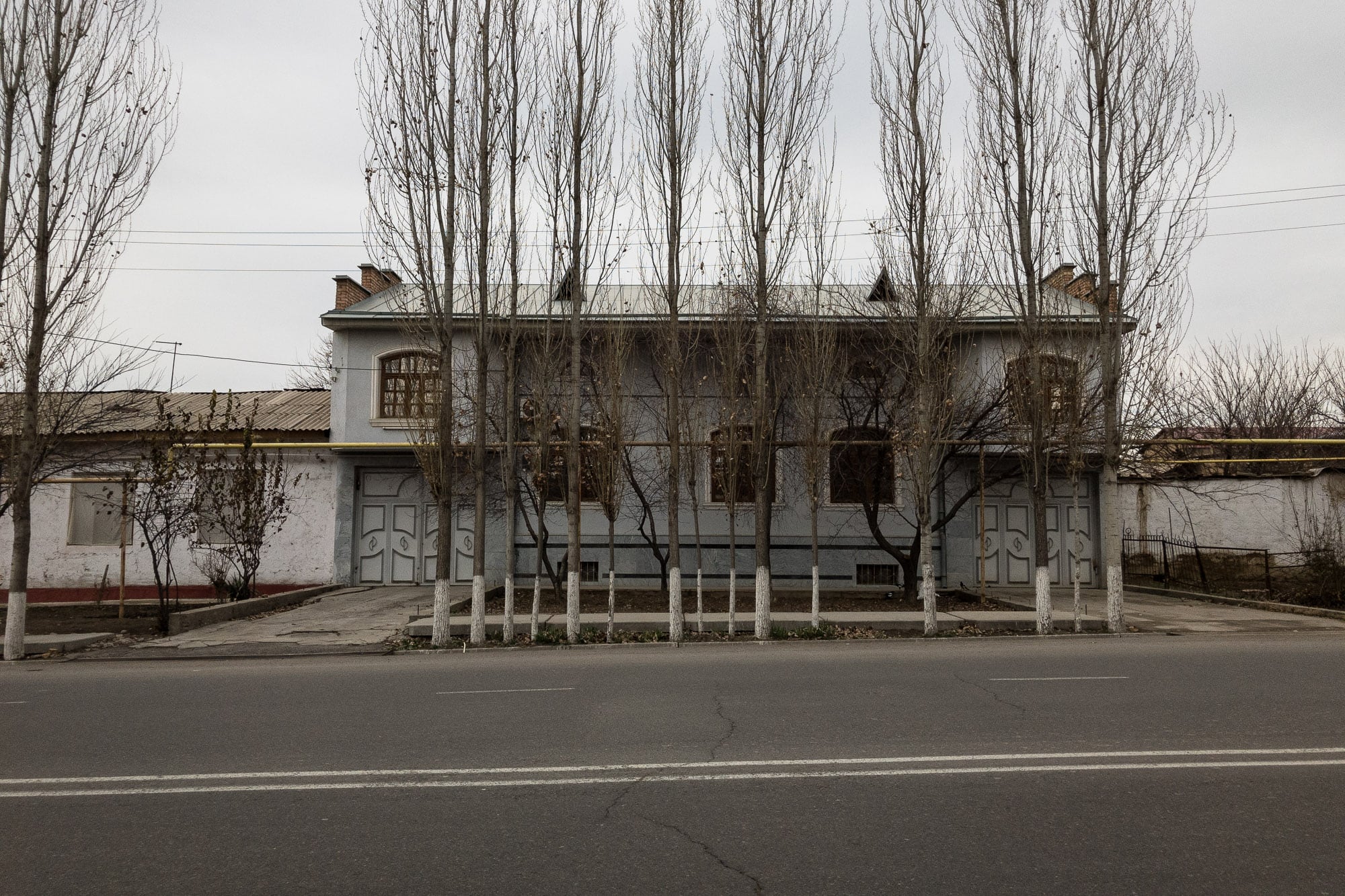 I kept to the side of the road, hoping that the Caboose would hold up with her new welding job:

And then I reached Tashkent: 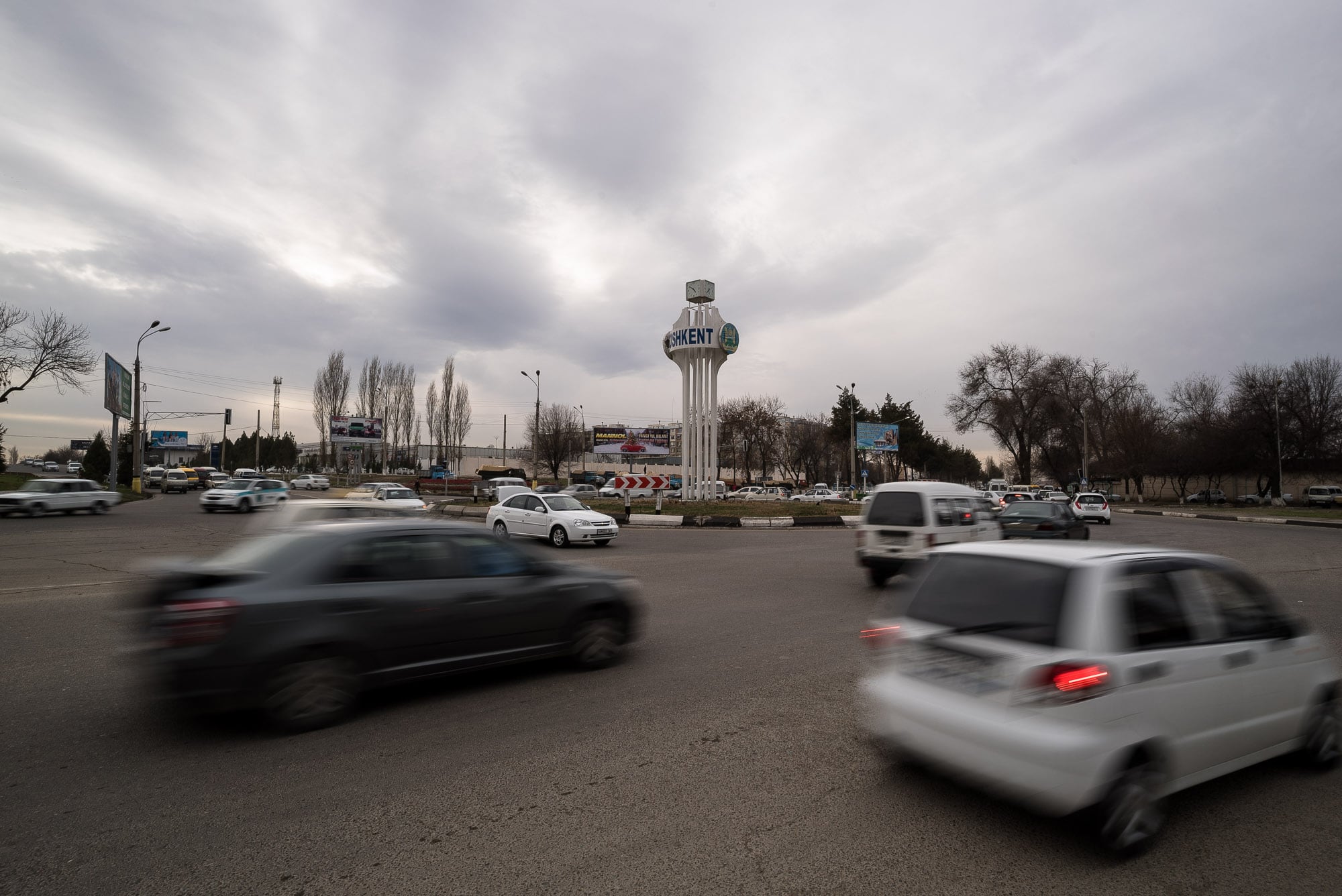 I had seen this place name on the map so many times. It had always seemed so far away. And now I was here!

I liked this green car: 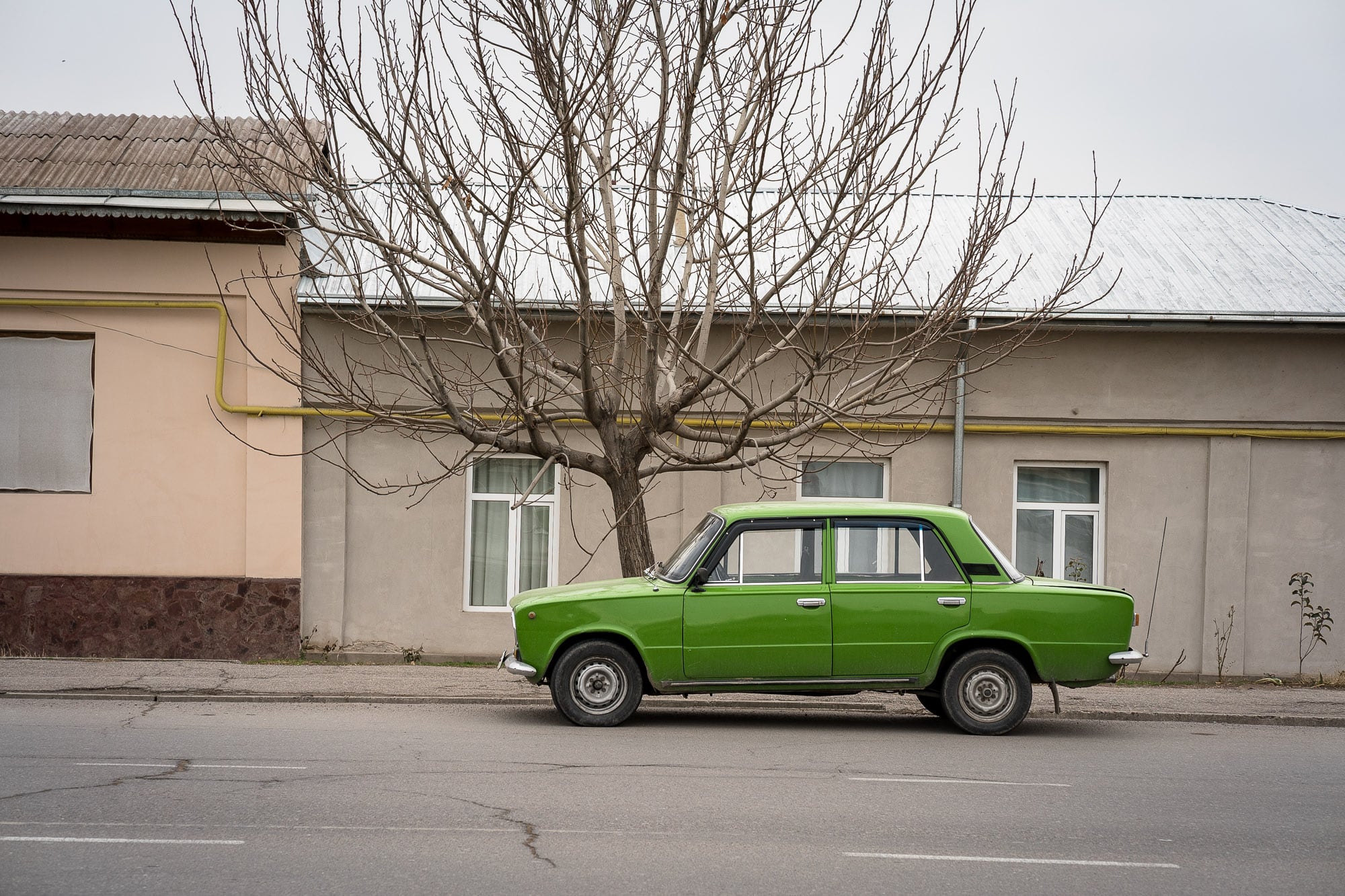 And this girl looking out at the traffic: 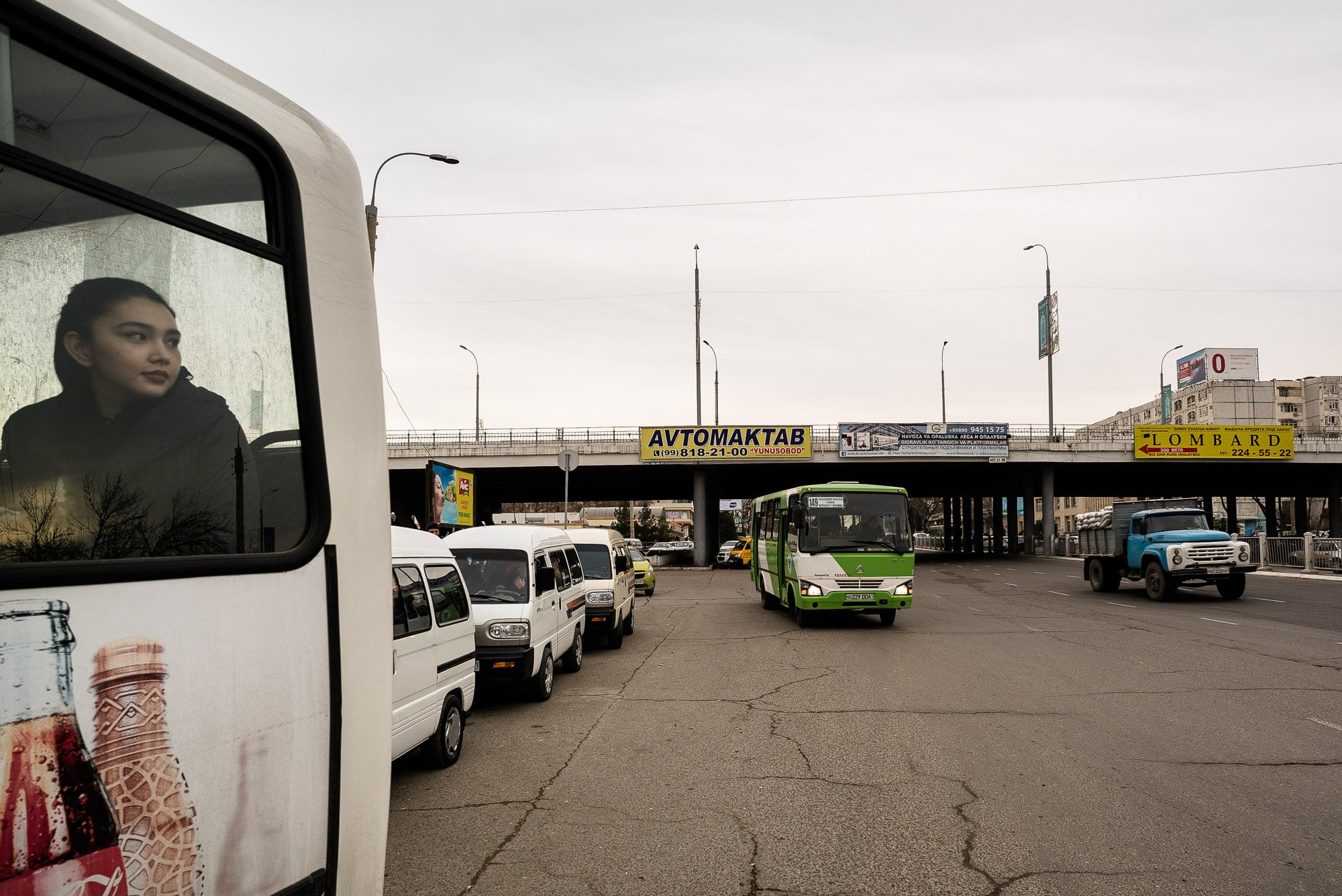 I was tempted to walk all the way to the hotel and deprive myself of dinner (and lunch, actually) until then. But then I decided to take it easy and have some food in a self-service restaurant instead: 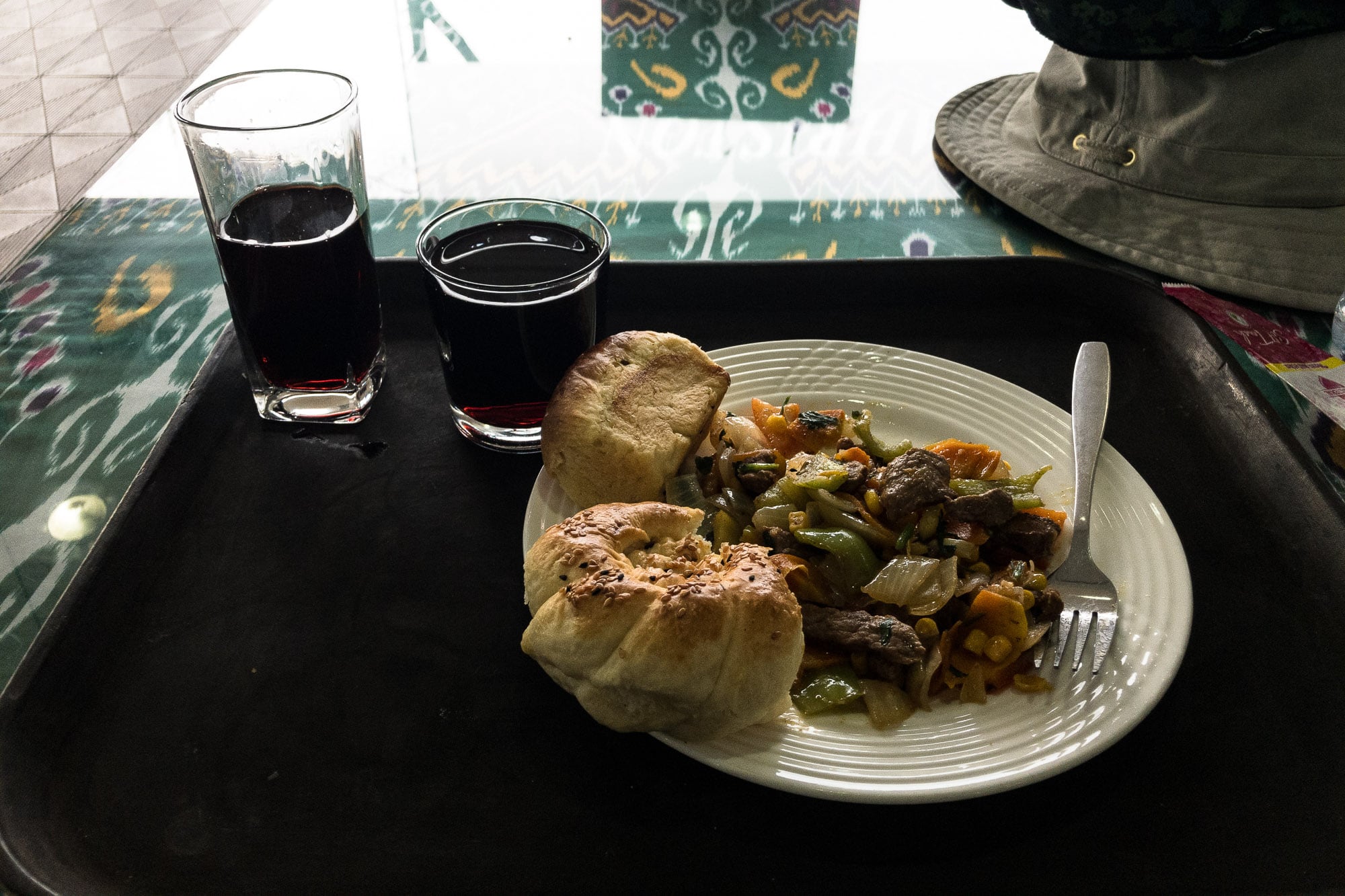 At one point there was a monument next to the road: 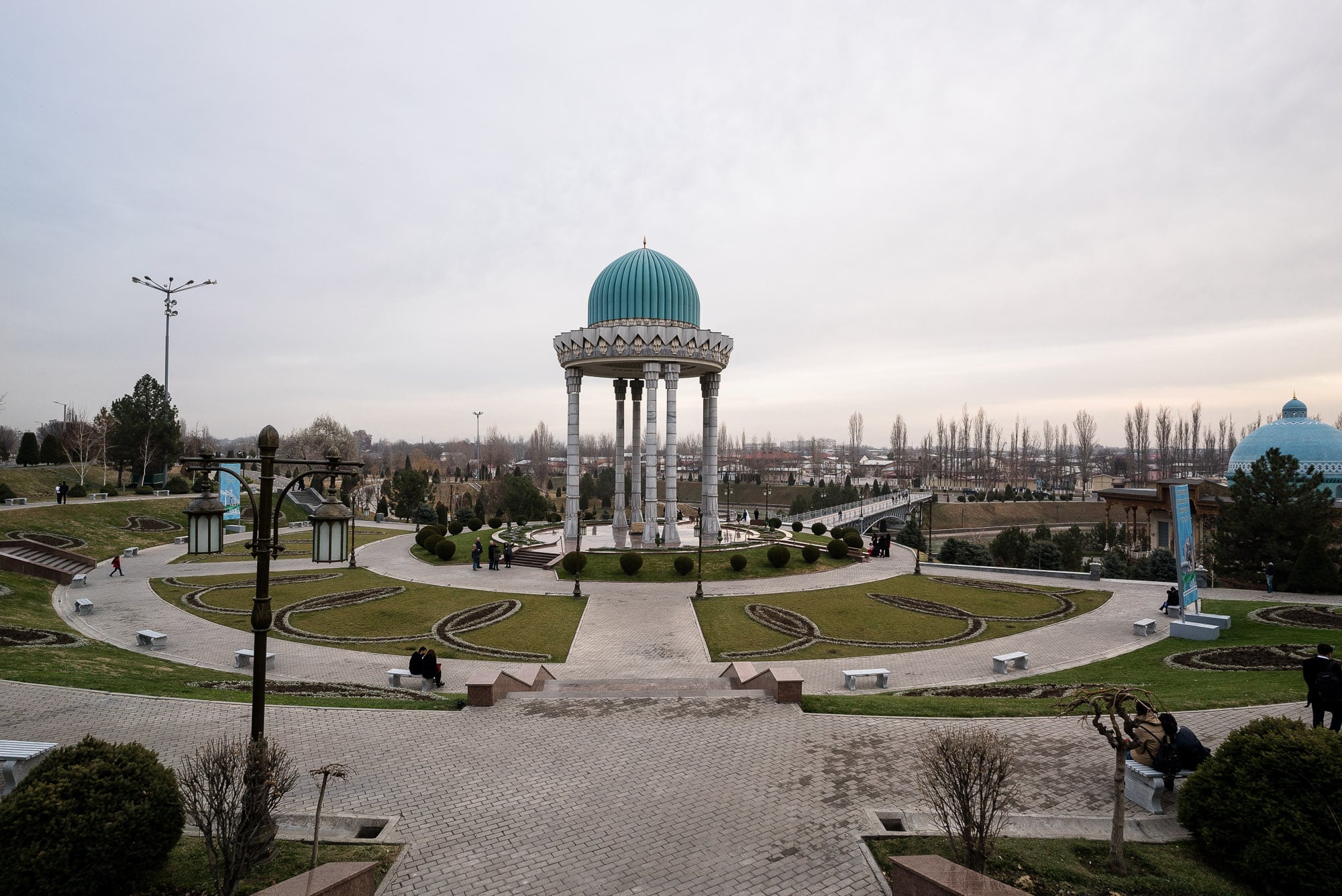 And I was surprised when I noticed that the inscription was in English: 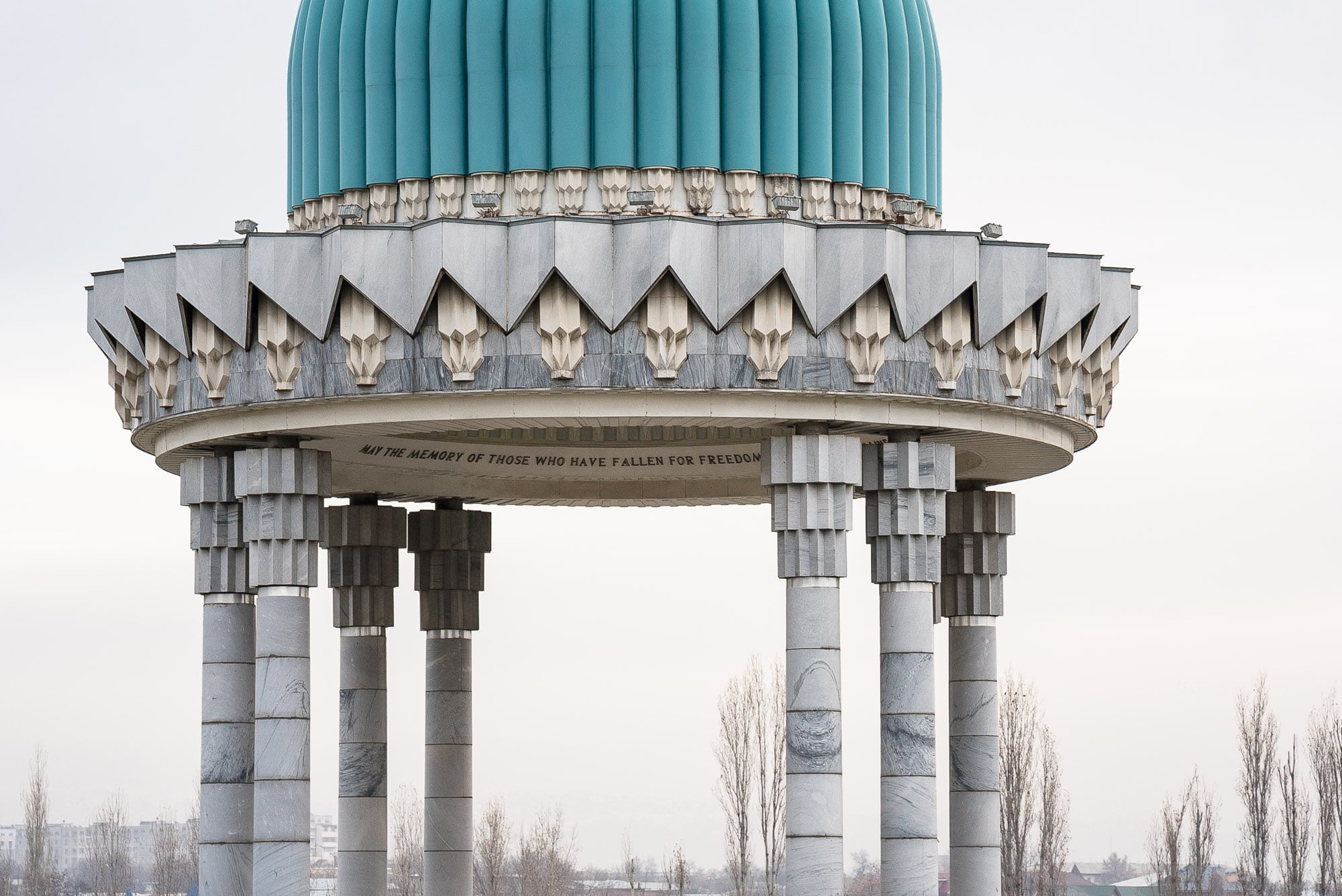 MAY THE MEMORY OF THOSE WHO HAVE FALLEN FOR FREEDOM…

Some of the buildings had nice mosaics on them: 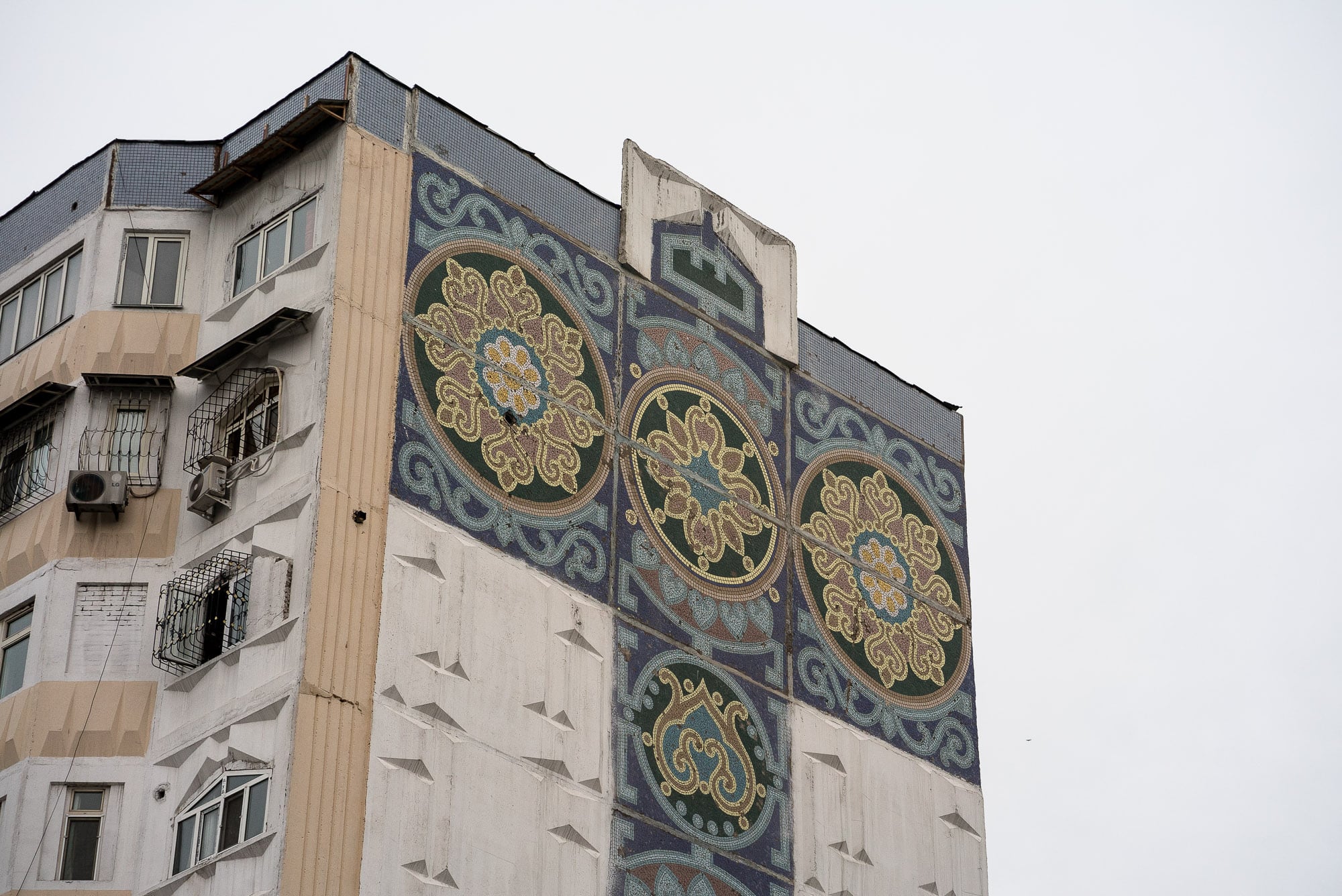 When night fell, I was still walking: 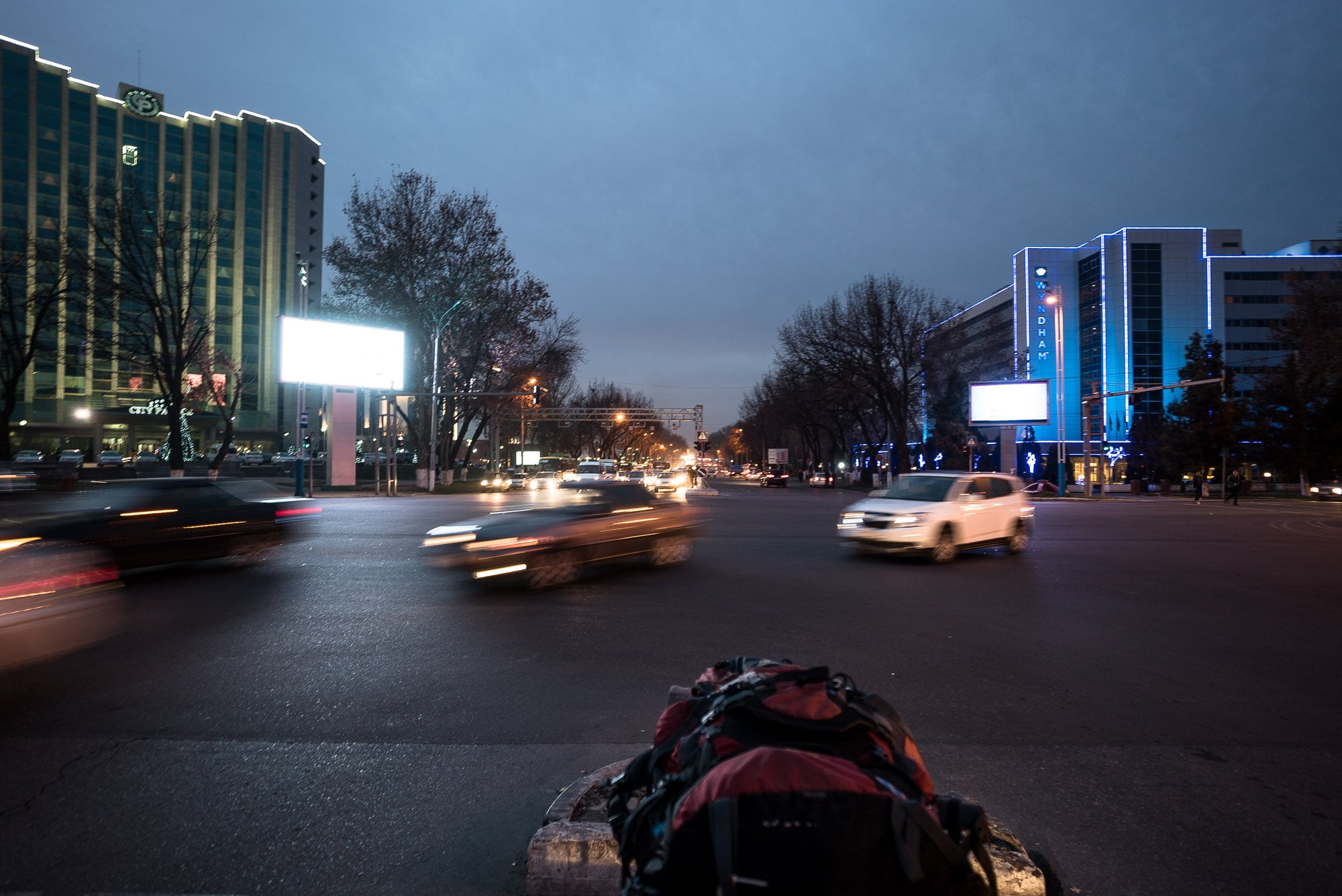 I wasn’t sure if this was an advertisement for a 4G mobile plan or something entirely different: 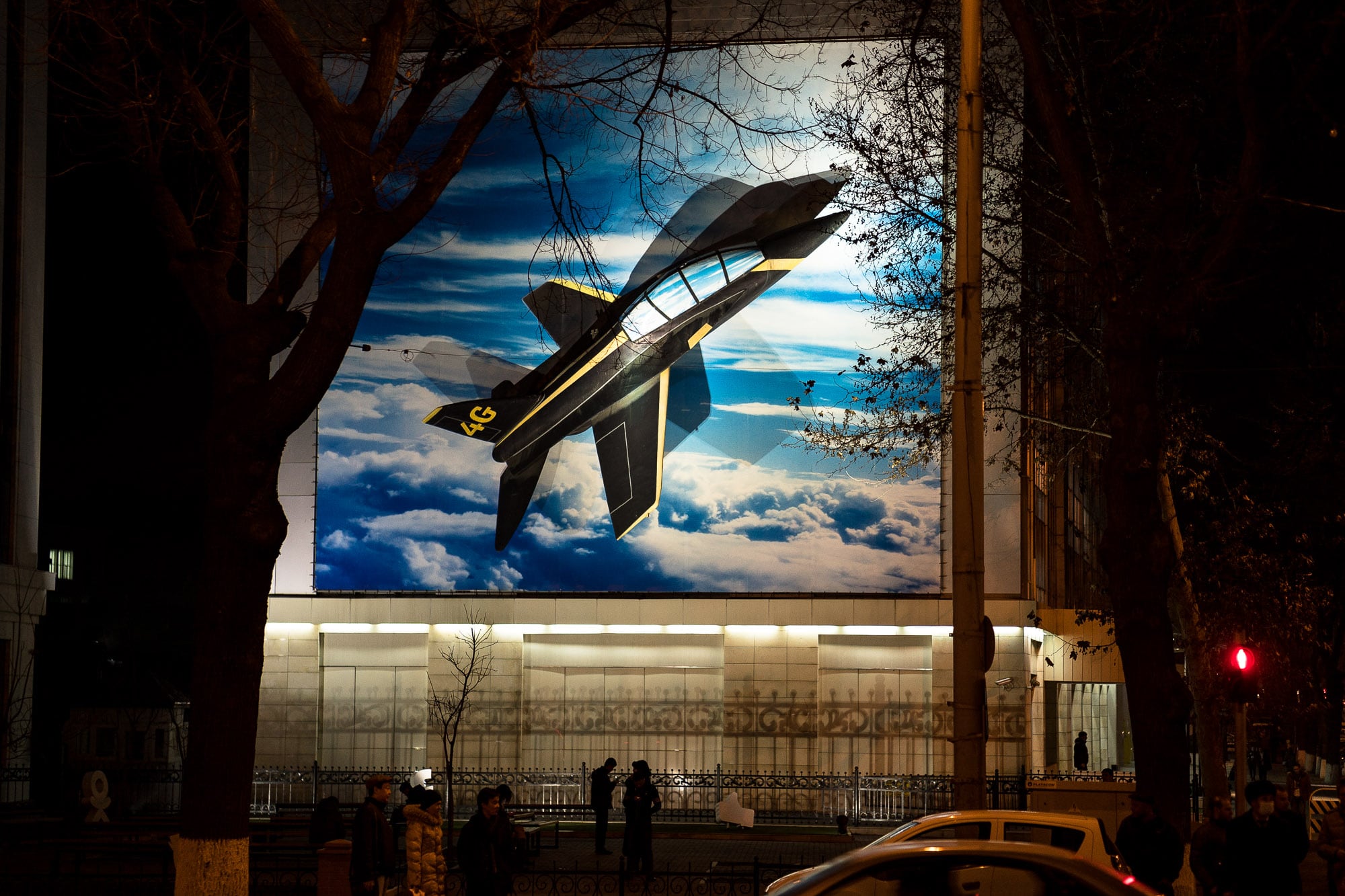 What I did notice was A LOT of Pepsi ads though: 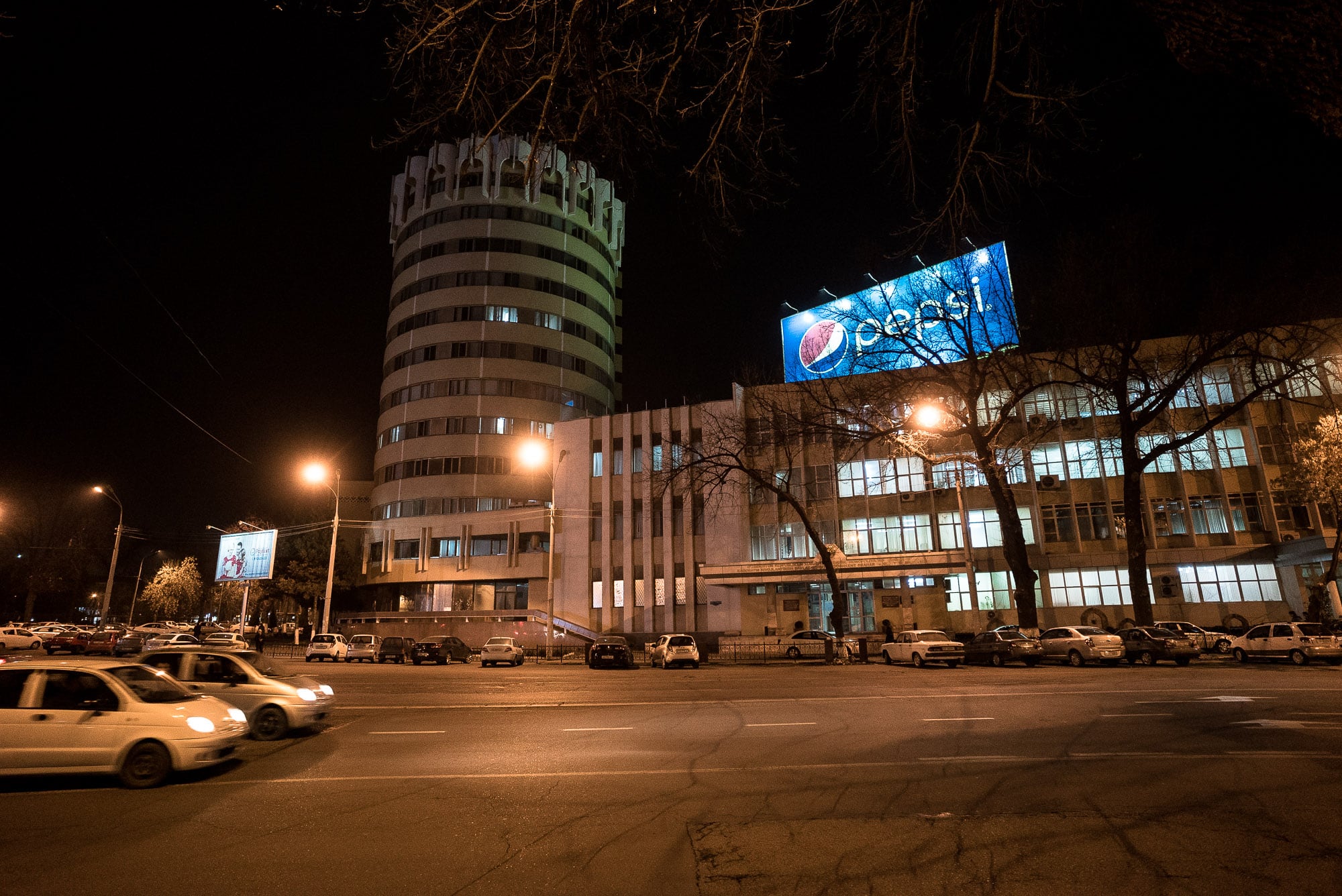 They were all over the city: 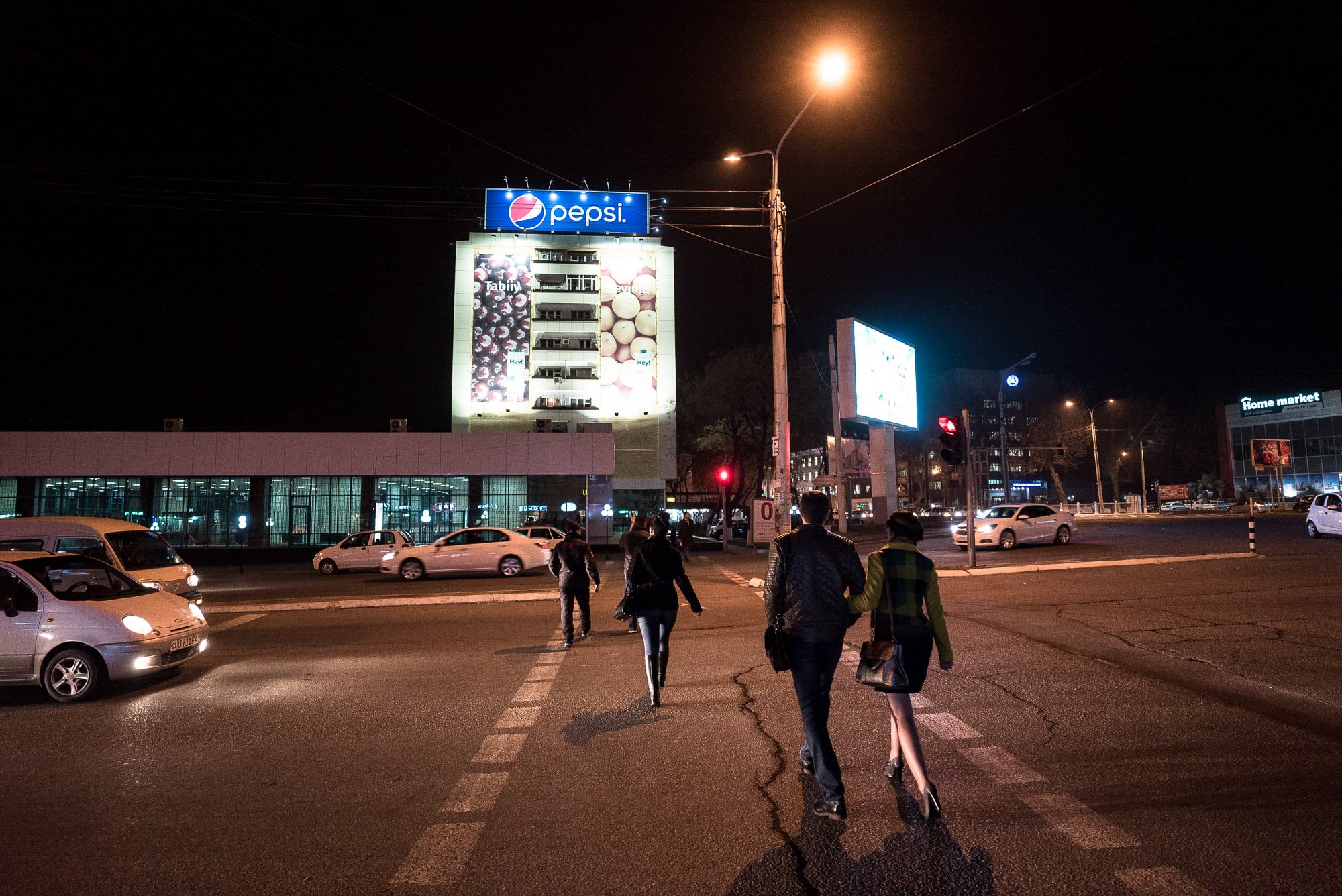 Does this mean that people in Tashkent love Pepsi? I thought.
Or does it mean the opposite, that they don’t love Pepsi enough?

At some point I left the main roads and turned into a quiet neighborhood to look for my hotel: 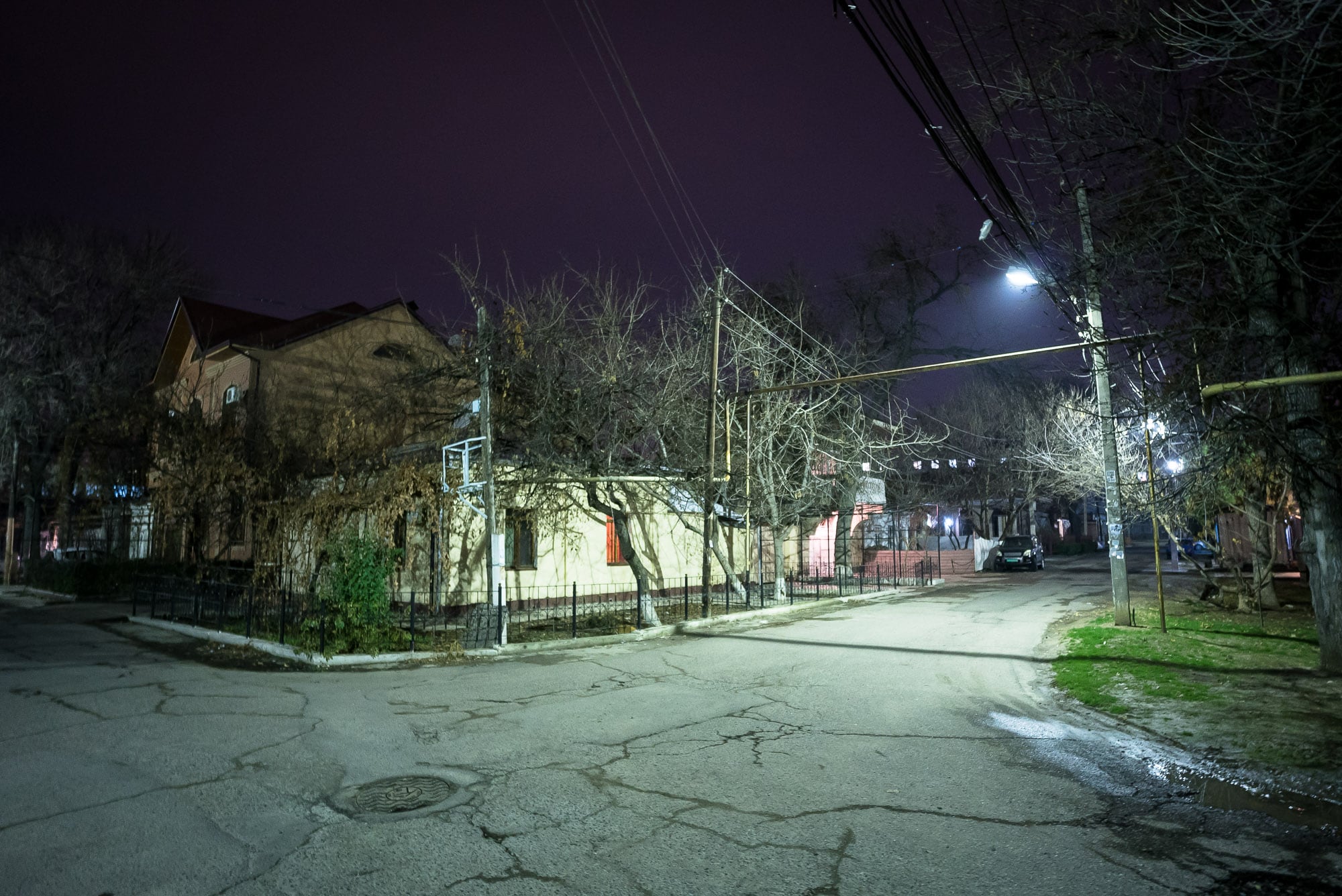 And when I found it, I took my first shower in four days.

Then I crashed on the bed.

Day 594
from Zhibek Zholy to Tashkent