Woke up in my tiny room: 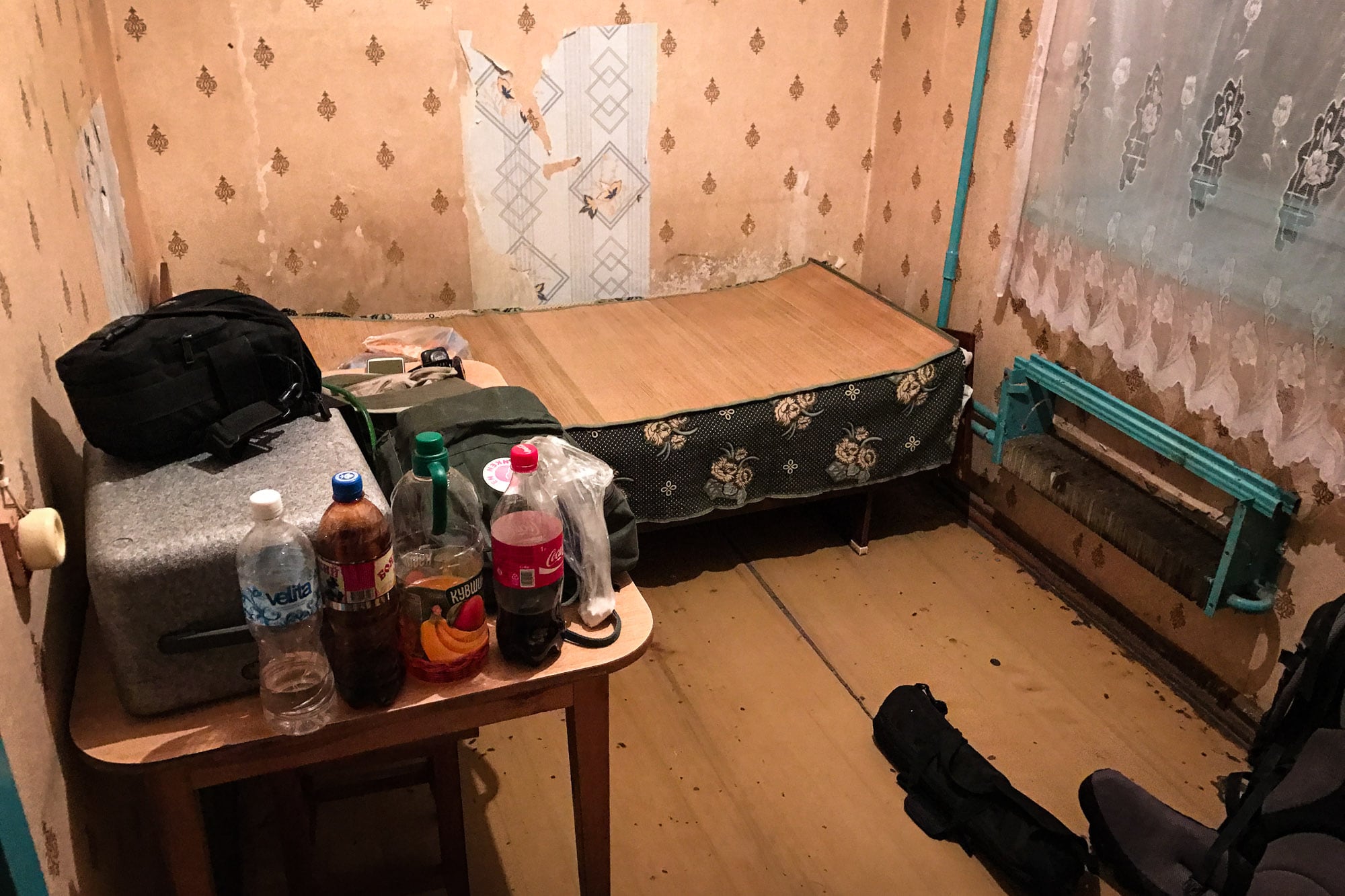 Or the hole as I liked to call it.

Then I said good-bye to the friendly ladies who worked at the hotel and stepped out of its main entrance: 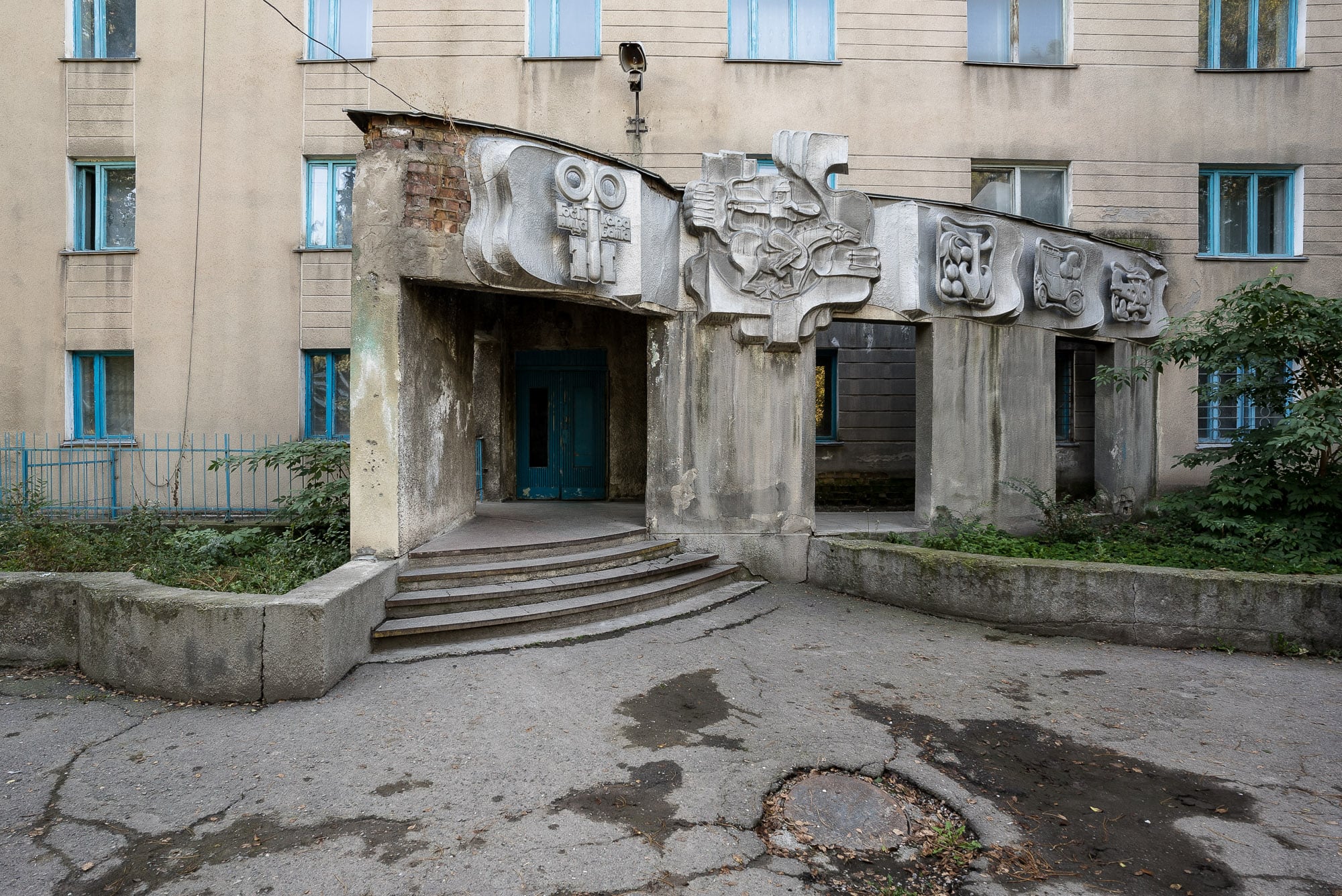 I was relieved to be outside again.

The air was fresh, and there were people around: 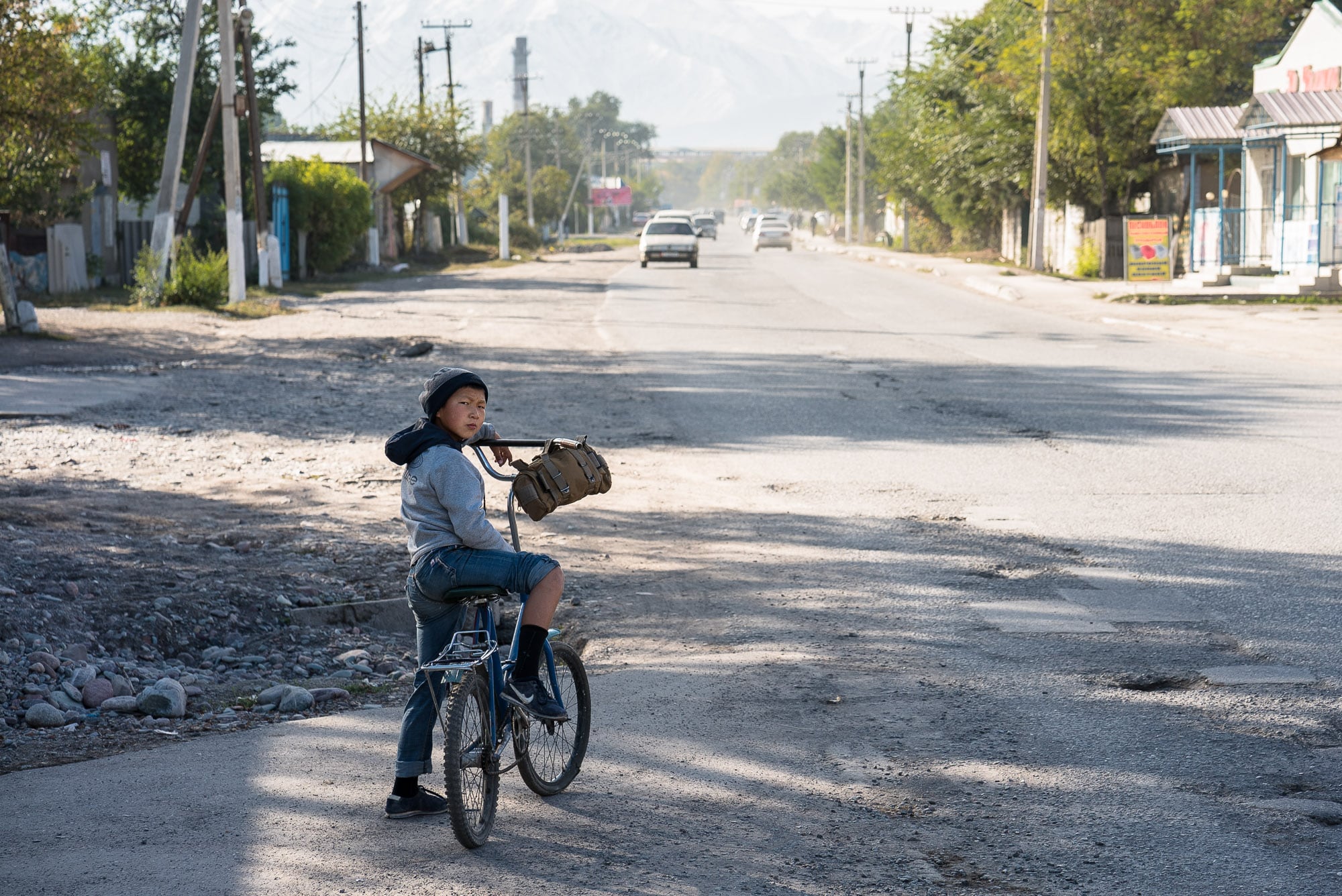 This was going to be my last day in Kyrgyzstan, so I was planning to take it slow and easy: 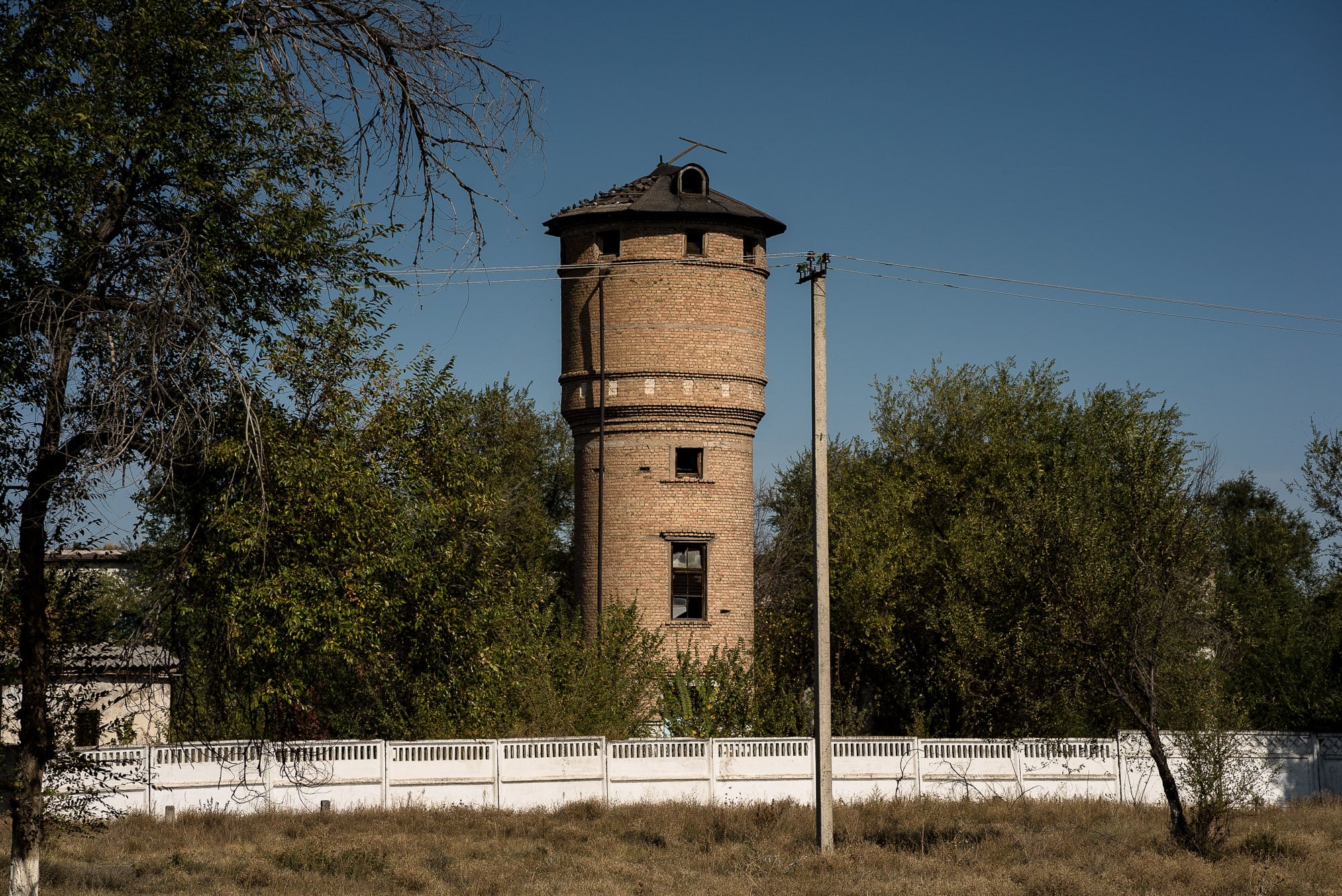 I saw the mountains towering behind the road: 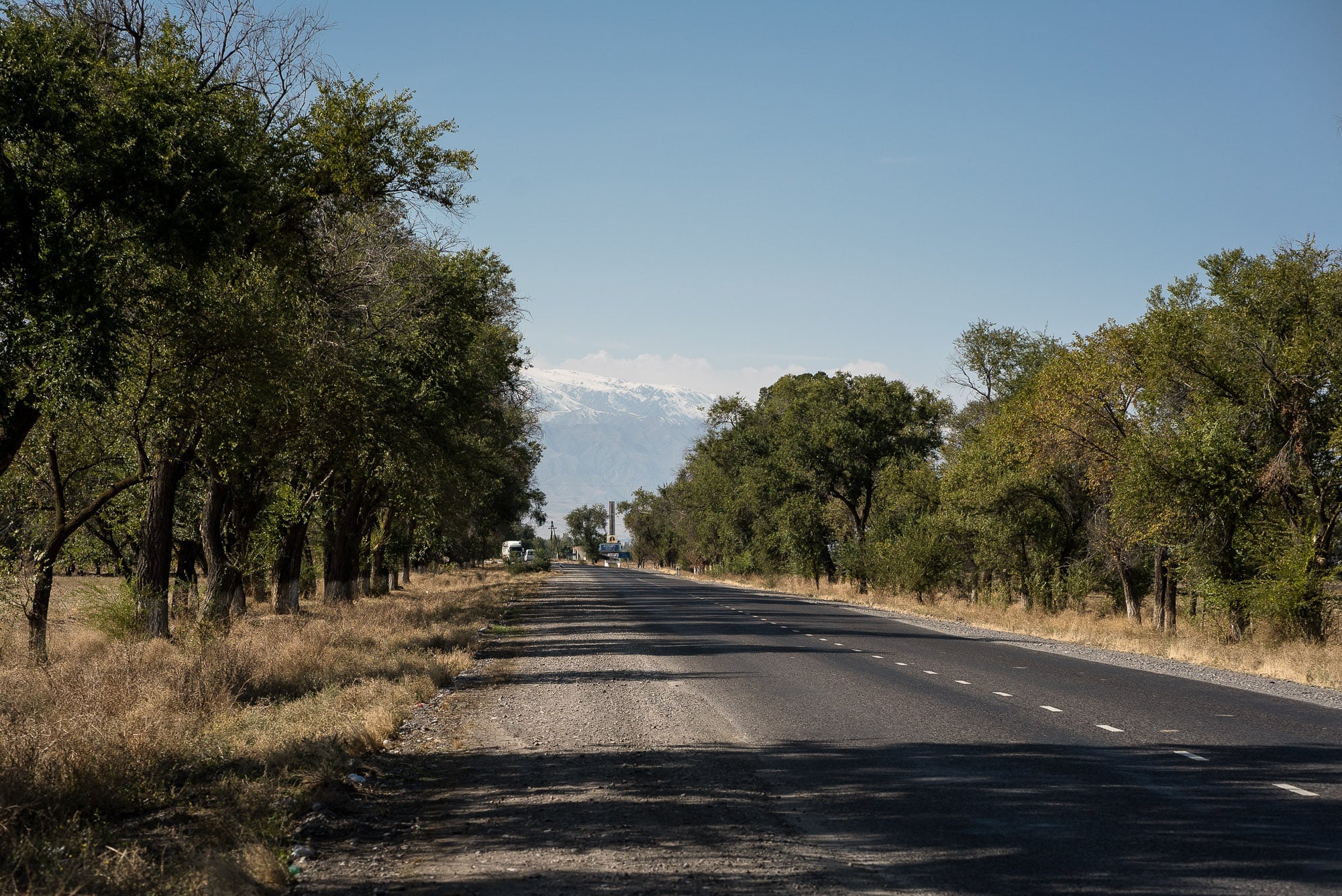 And sometimes, when the trees gave way, I could see them in all their glory: 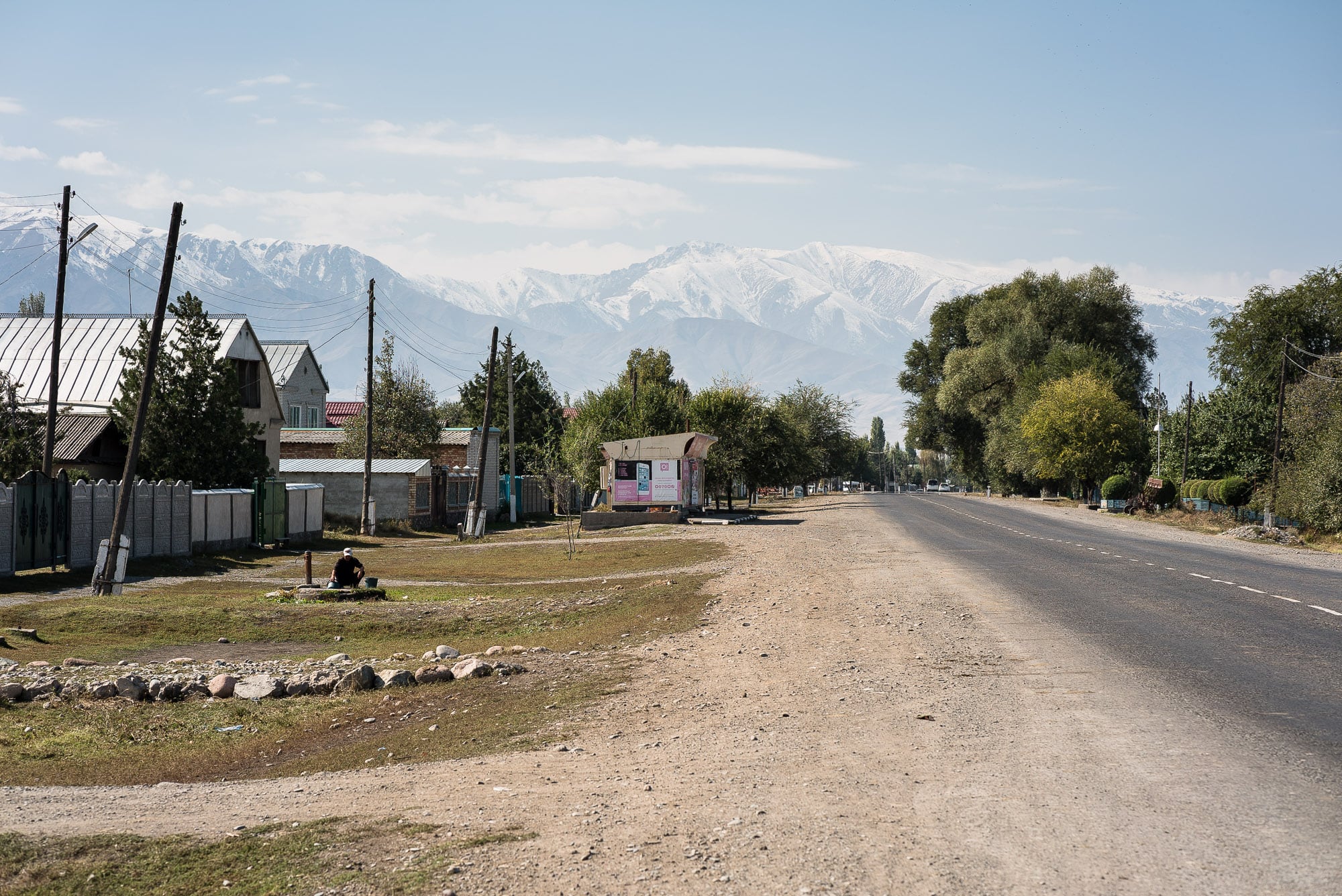 When truck driver Volodya saw me, he patted me on the back and insisted on giving me a bottle of ice-tea: 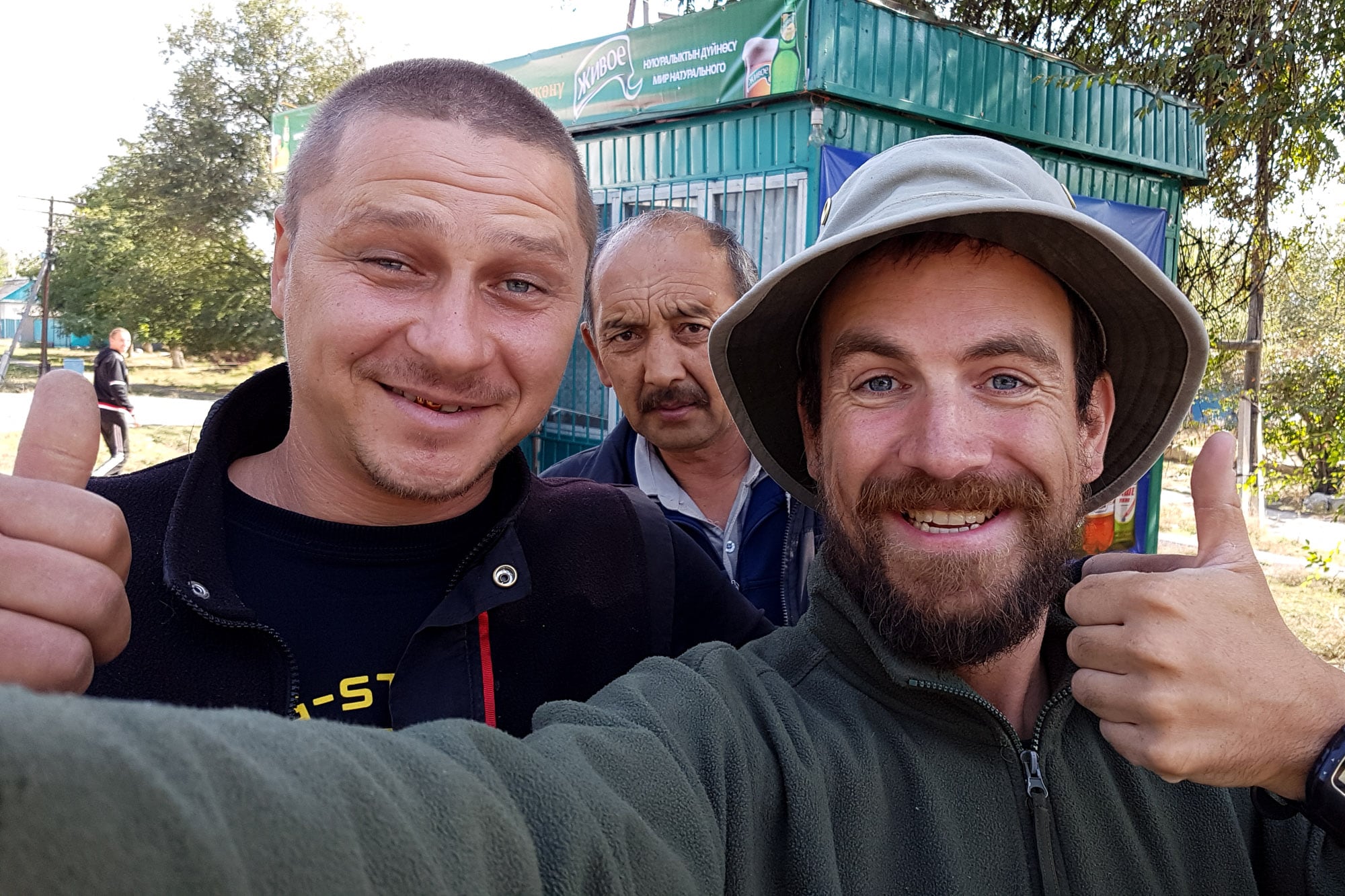 I walked past a Soviet war monument: 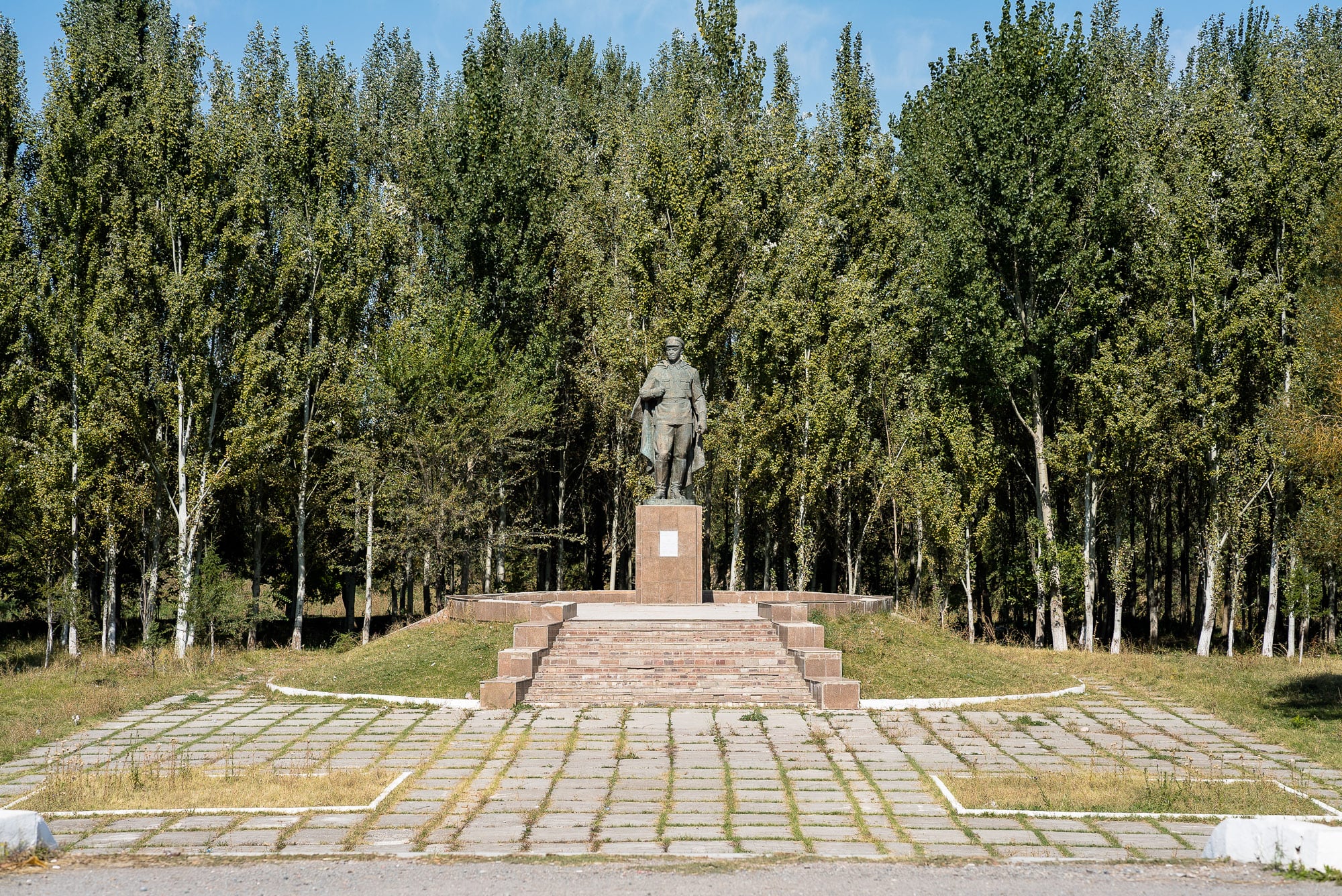 And then I met Kyal, a dentist who was into working out at the gym and driving his car around with the music turned all the way up: 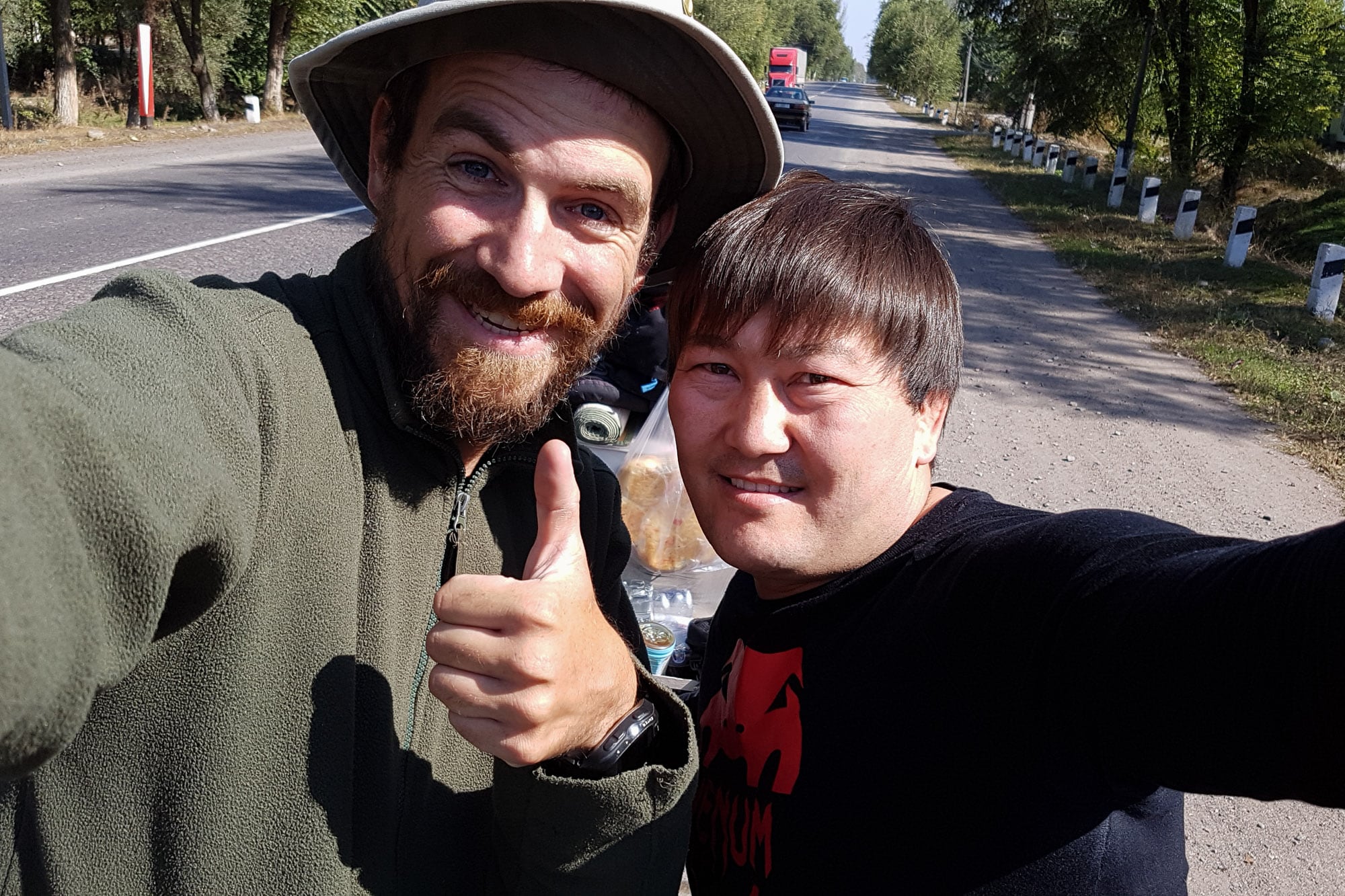 We hung out and talked for a little while, then we said our good-byes, and I started looking for a place for a lunch-break.

I had just arrived at these trees… 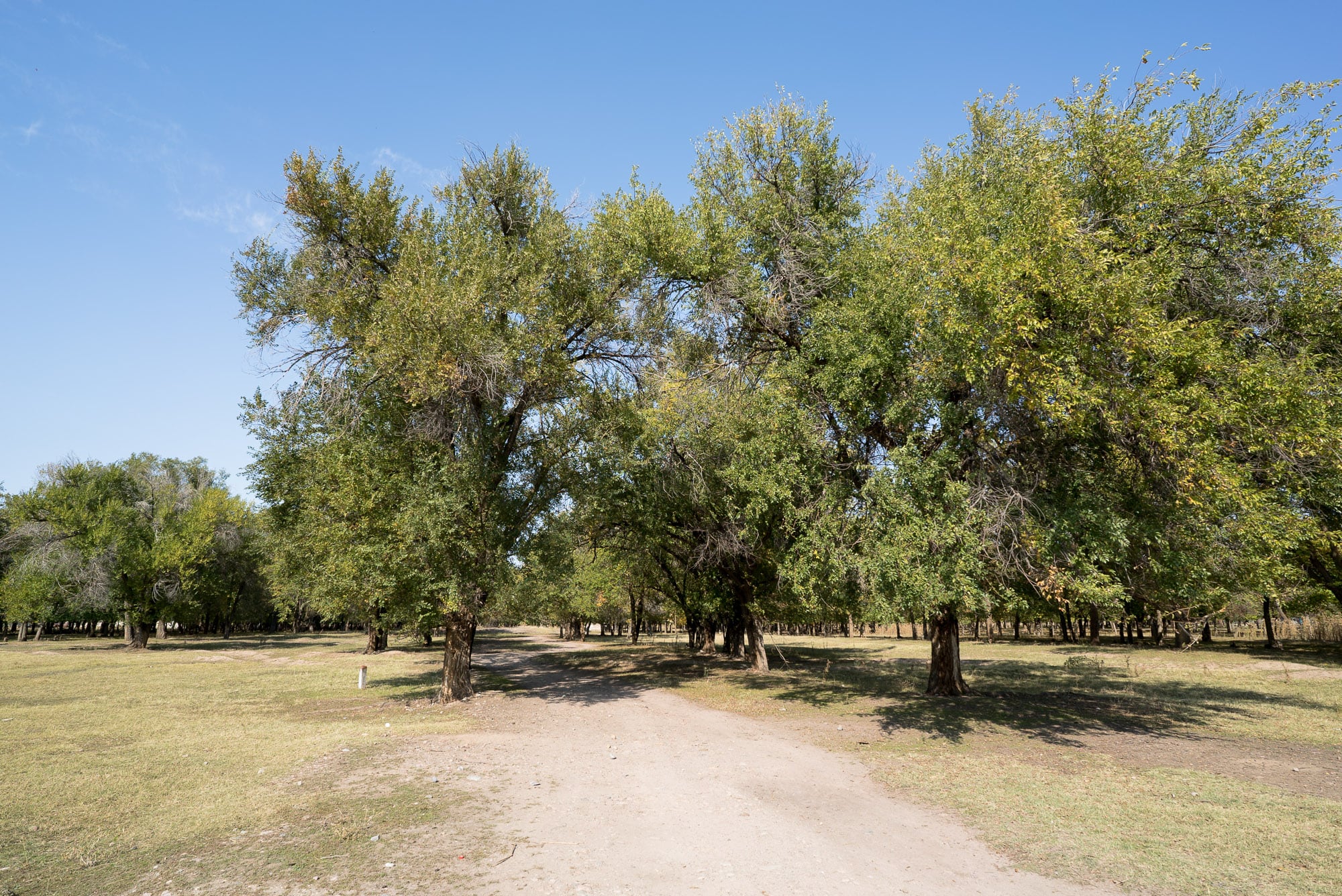 …when Kyal showed up in his car once more and told me to come with him. His parents lived nearby, and they had prepared lunch for us.

So we took a dusty road to his home village: 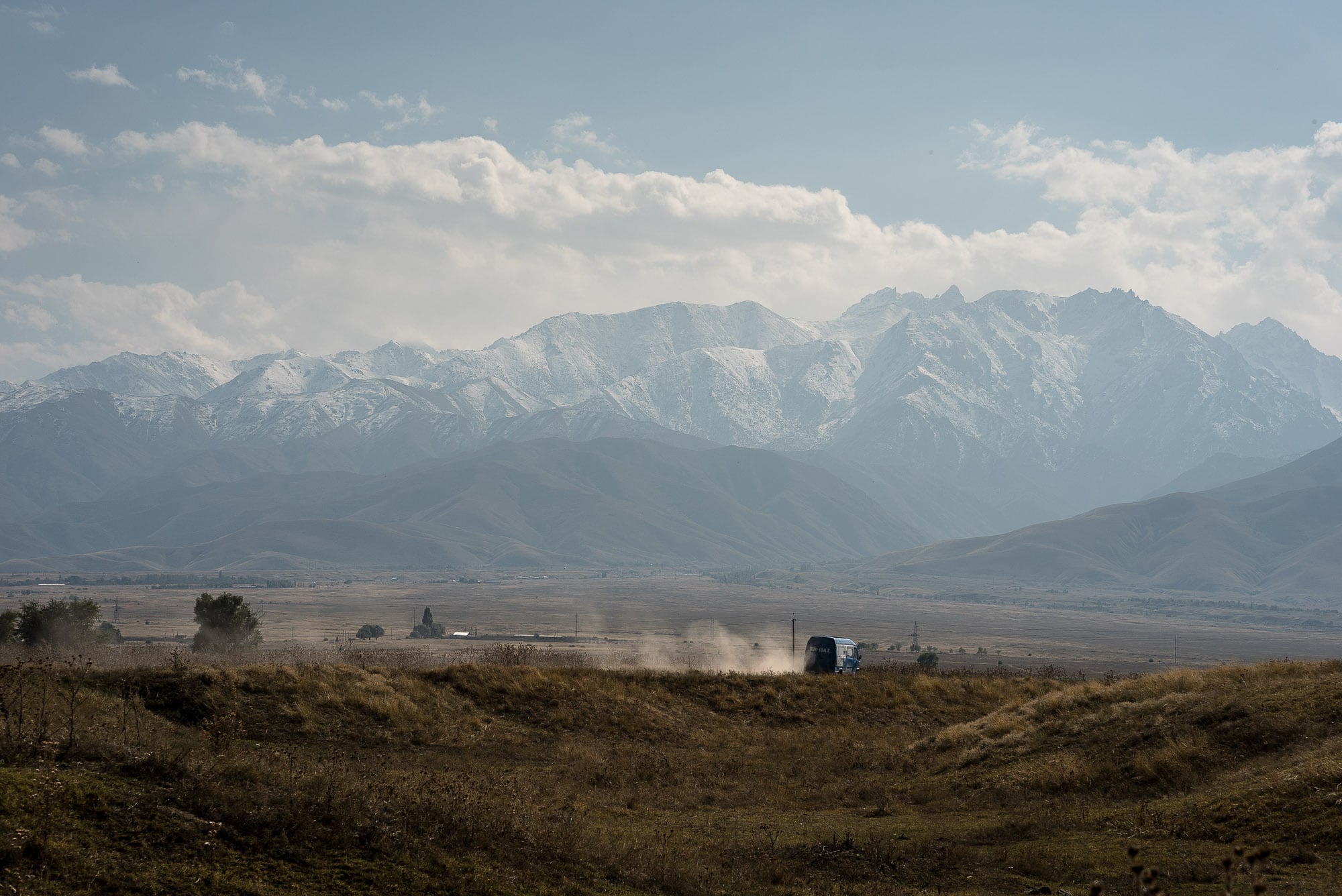 And we had a great time with his parents and his little sister: 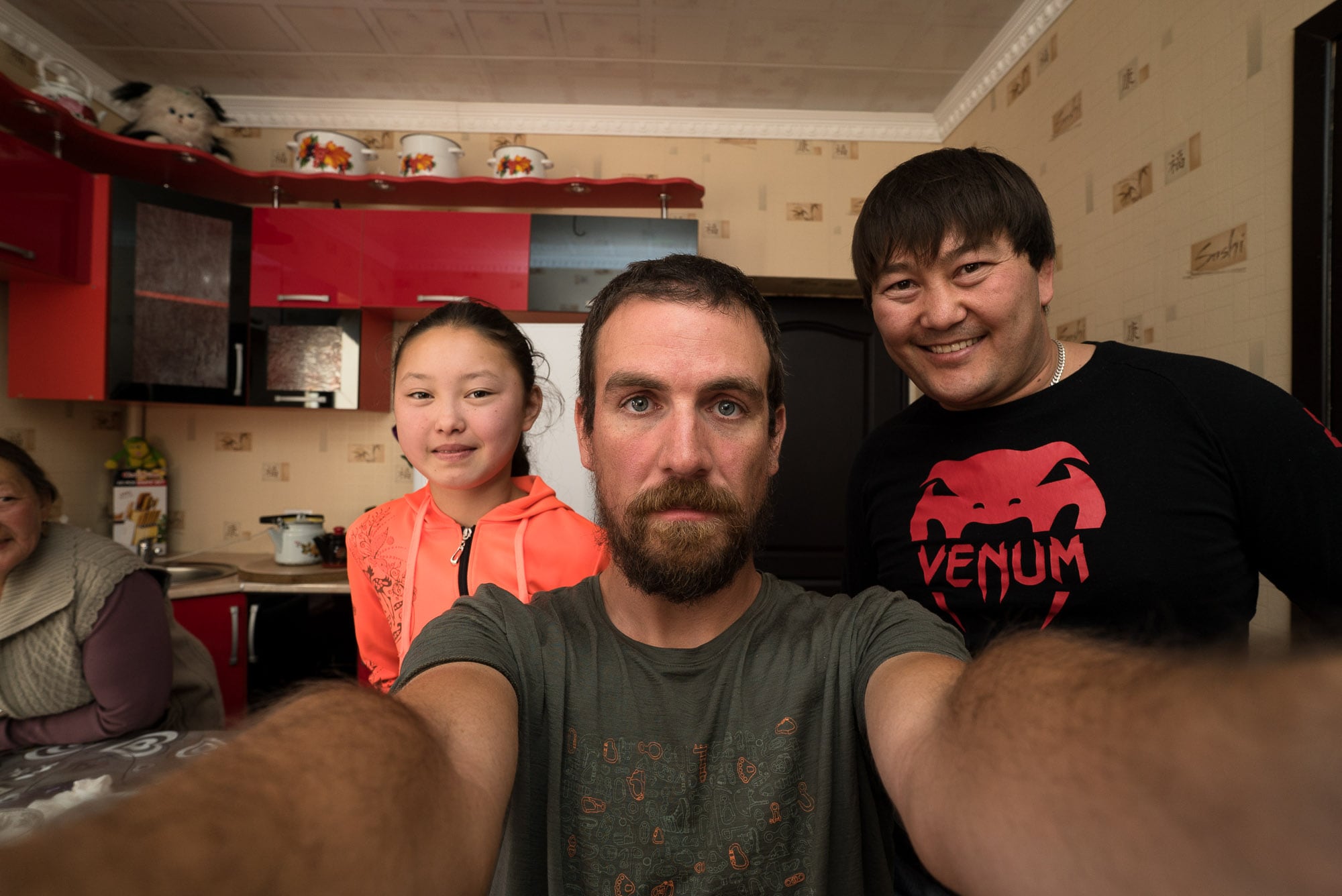 She played the piano, and she was taking English classes from a special tutor once a week.

Then we went and looked at their cows: 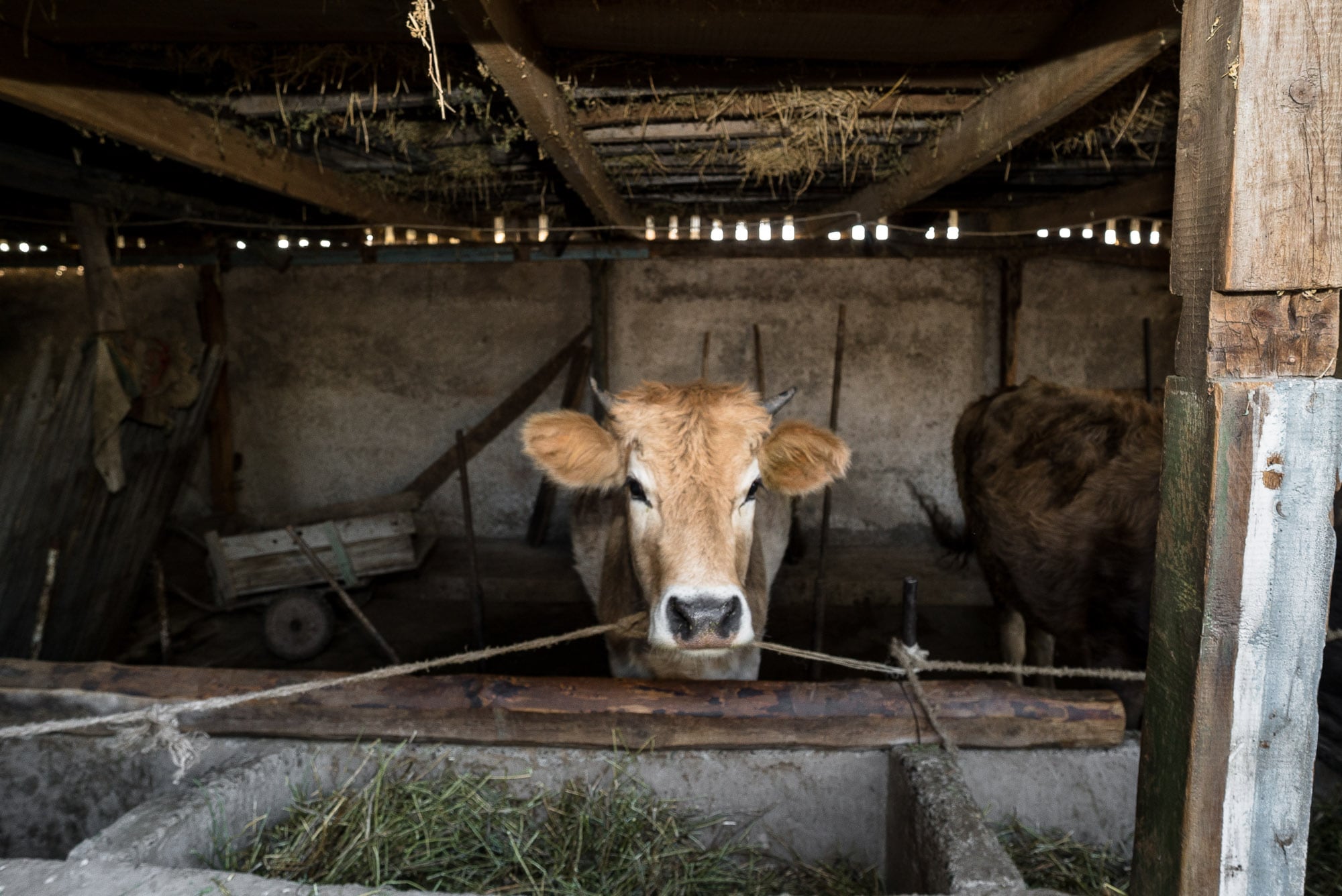 At which point I asked Kyal if he wanted to play with the drone. 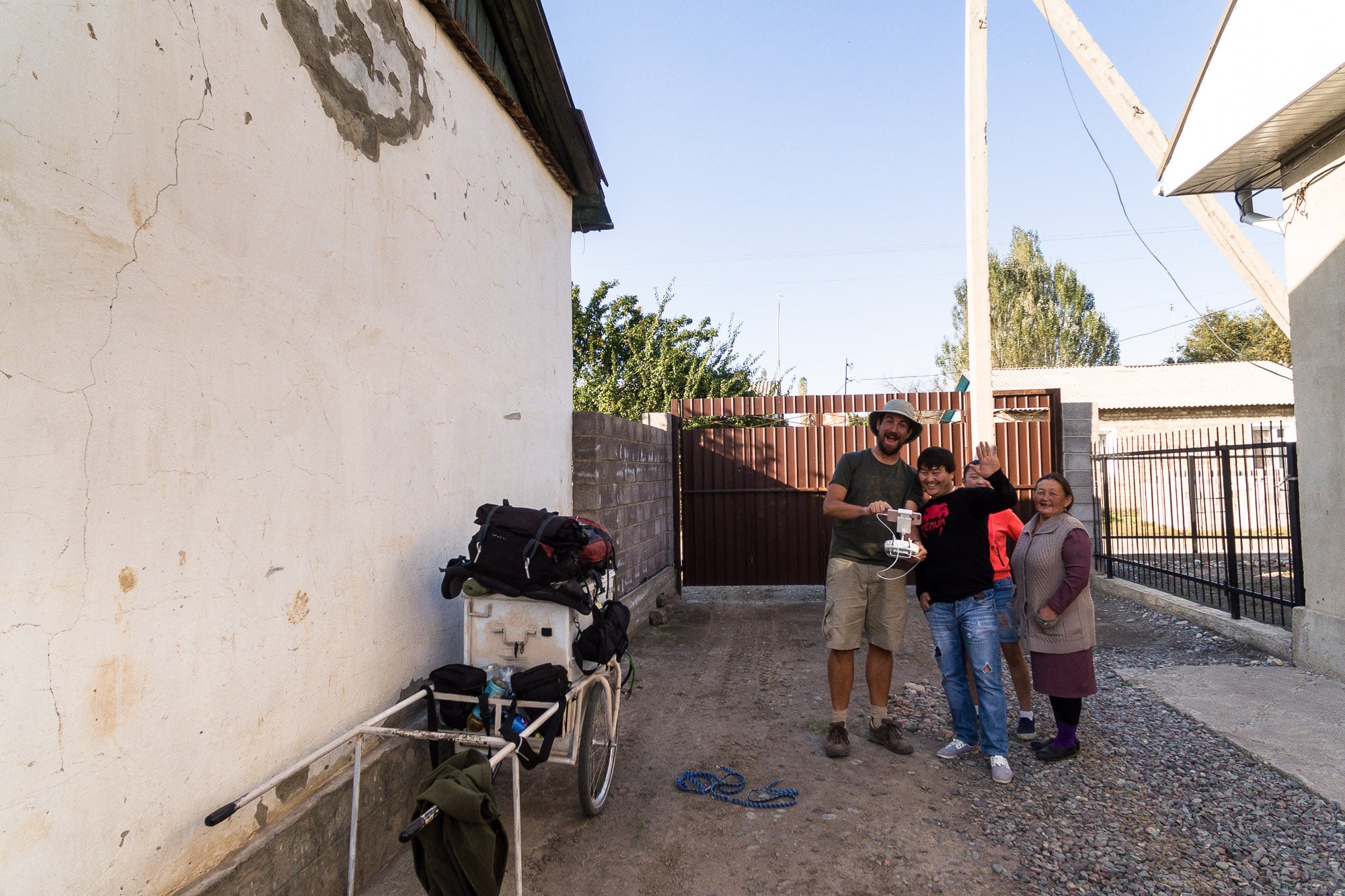 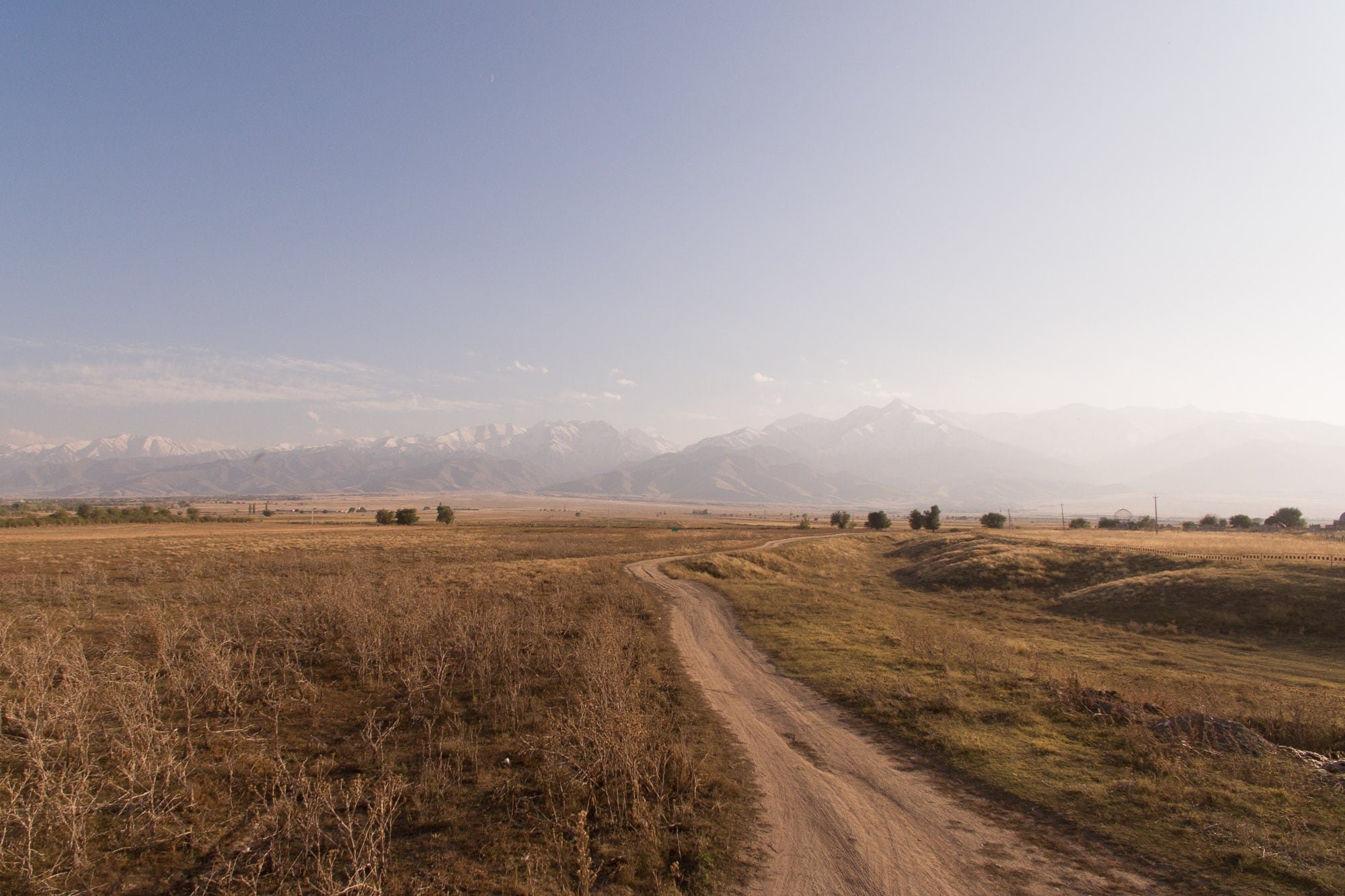 So he became my drone operator for the day:

At some point a couple of kids from the village appeared: 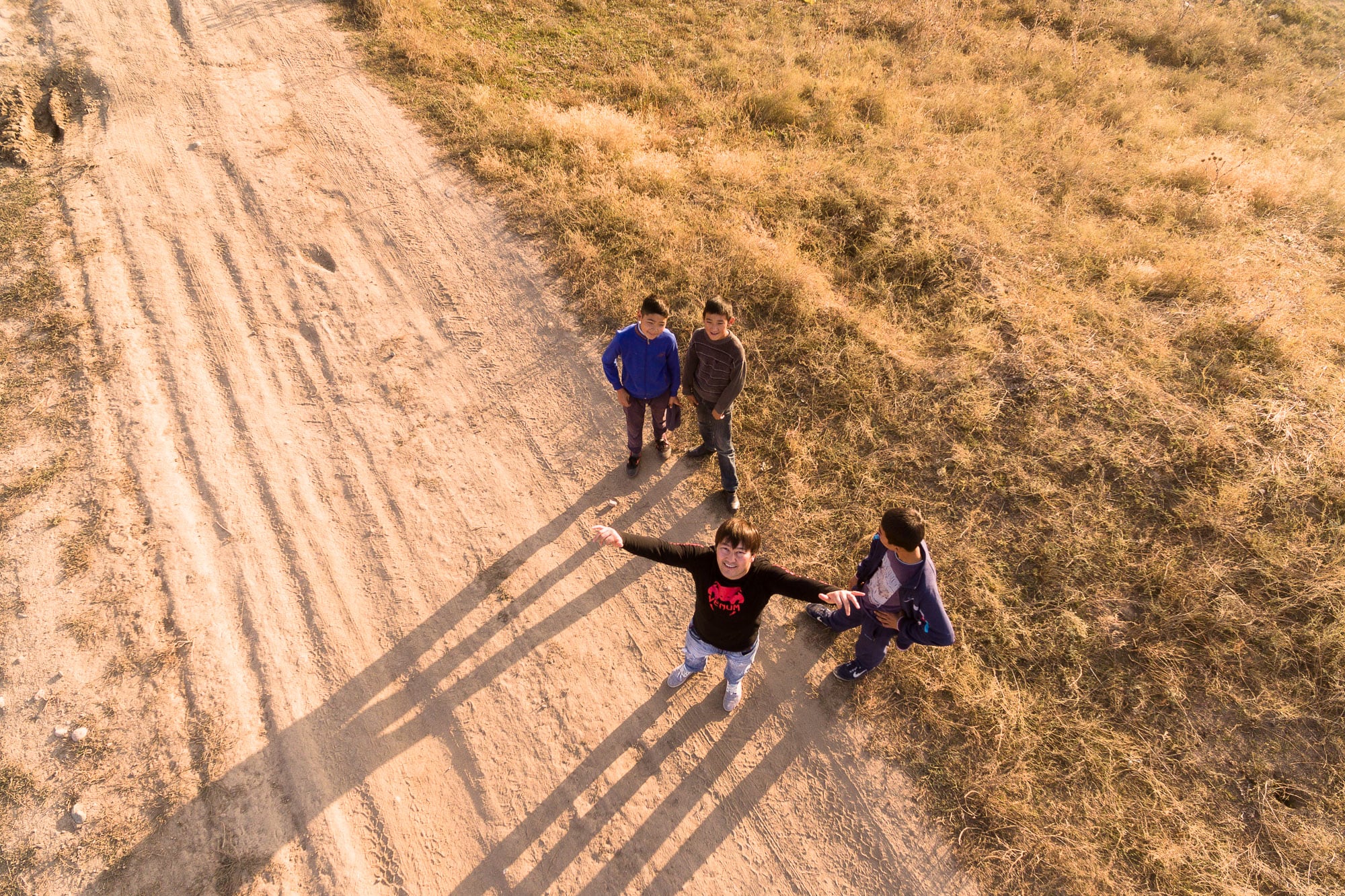 We had the drone fly around until all batteries were depleted: 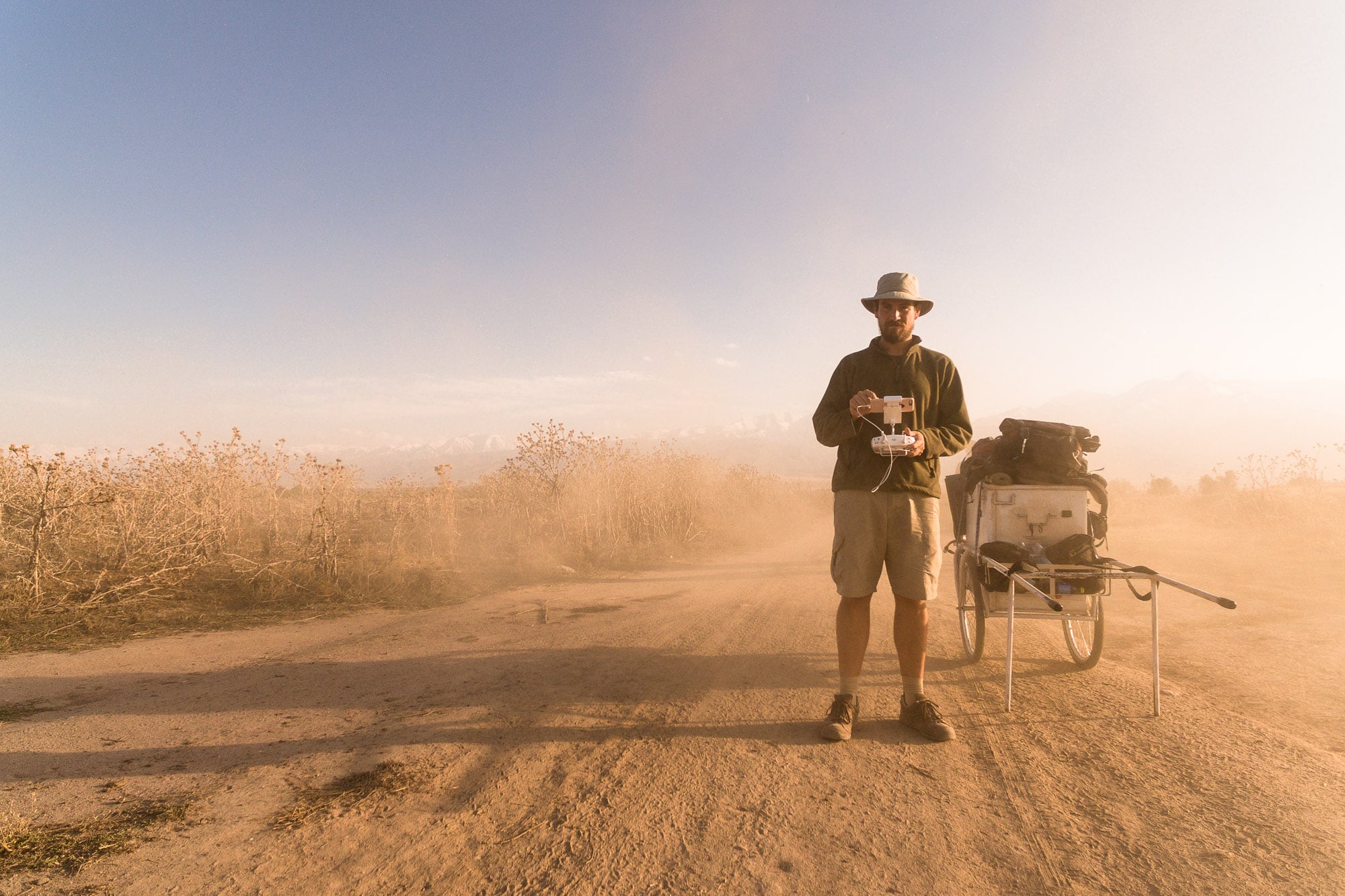 Then we took one last selfie: 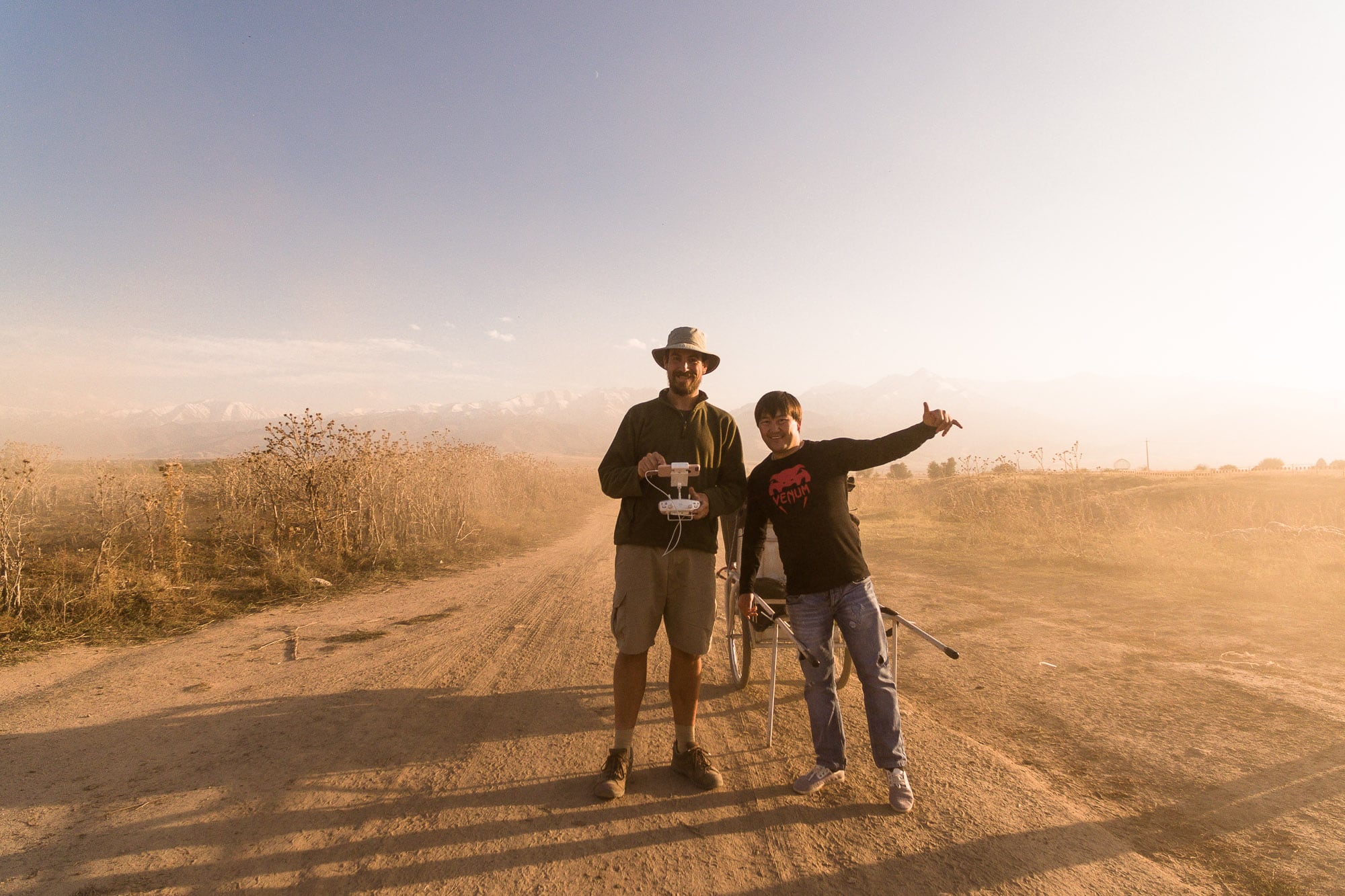 And I was on my way again.

It was just around this time when the cows got driven back to their sleeping places: 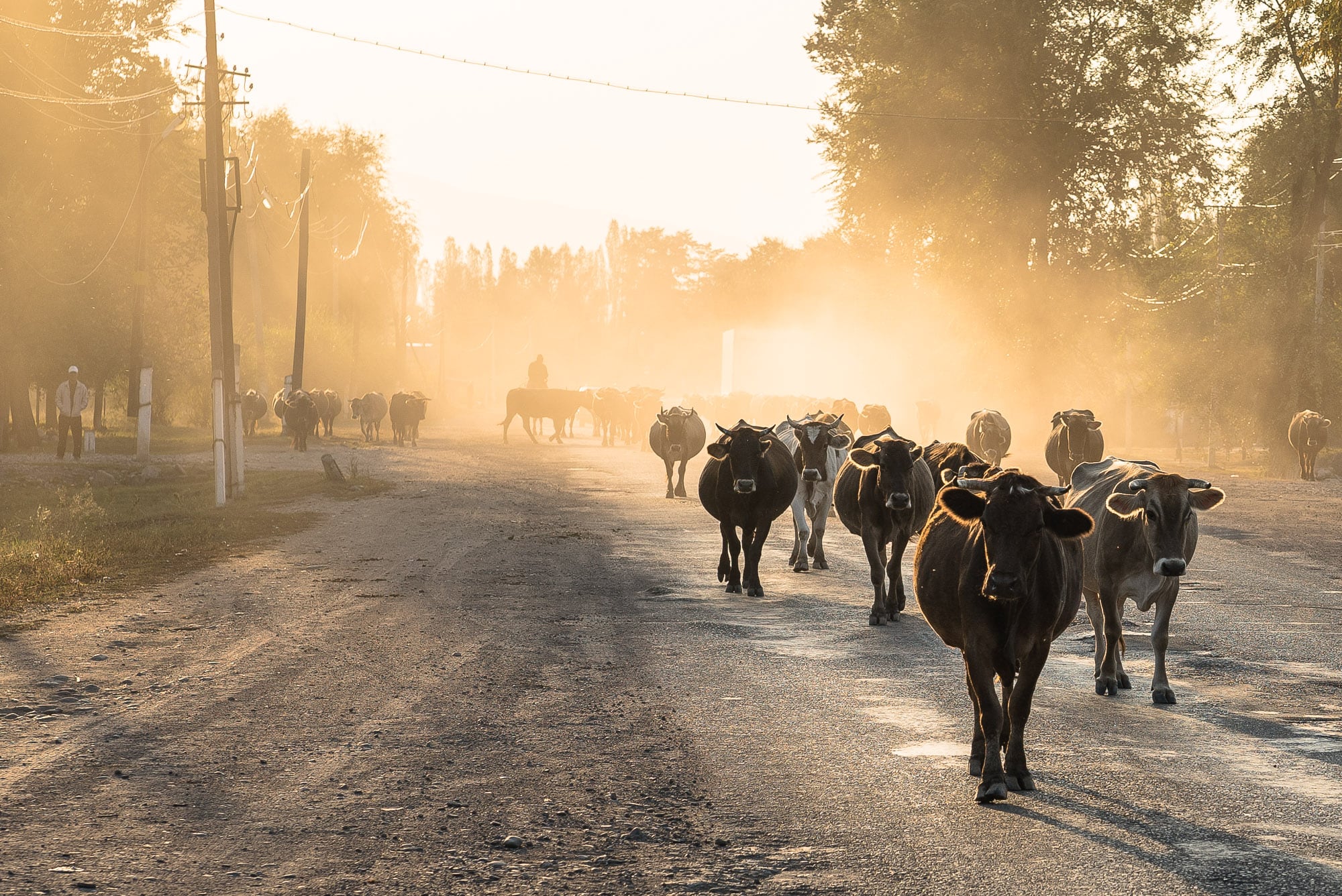 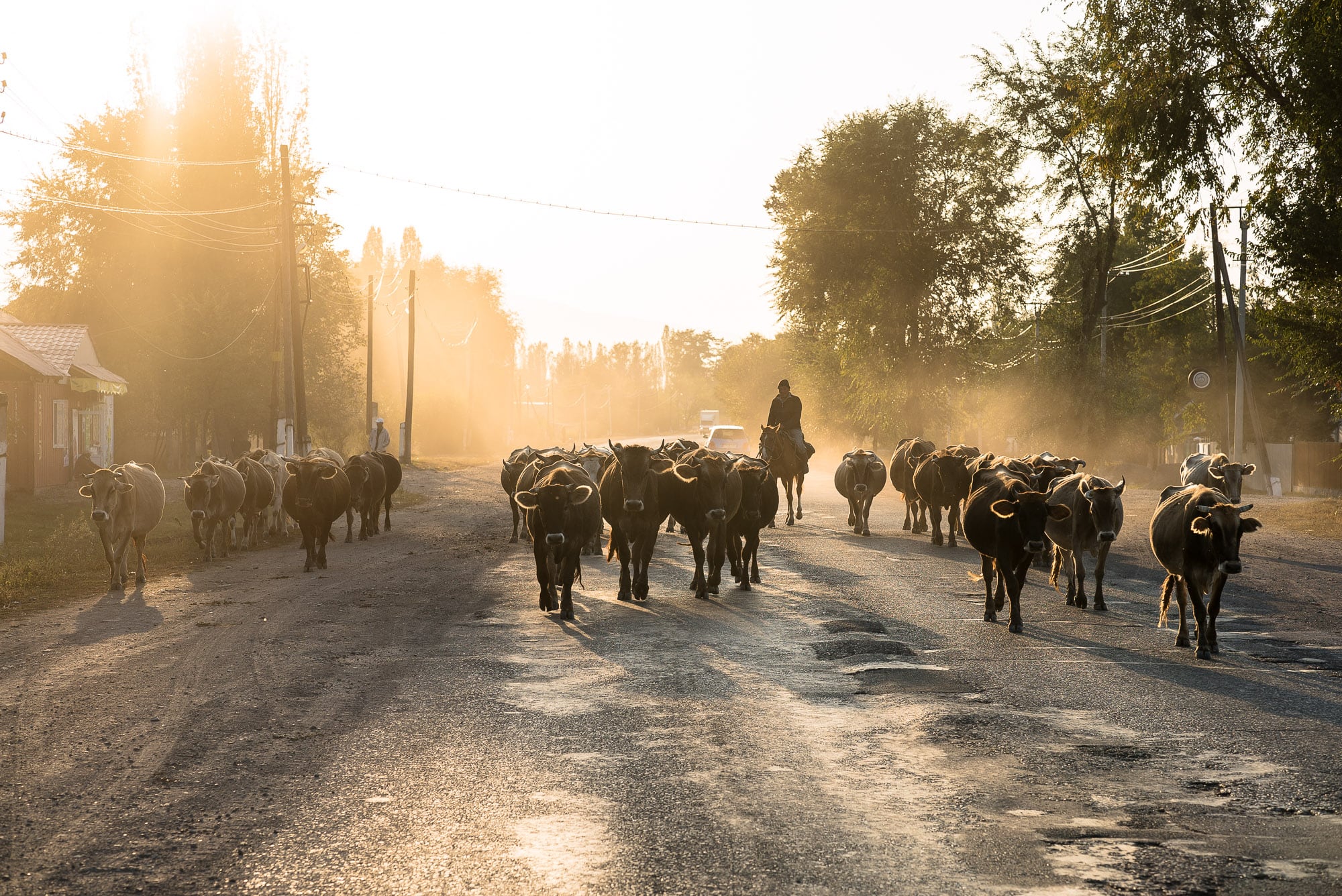 Here are my thoughts about the day, nicely wrapped in another episode of Let’s Walk: 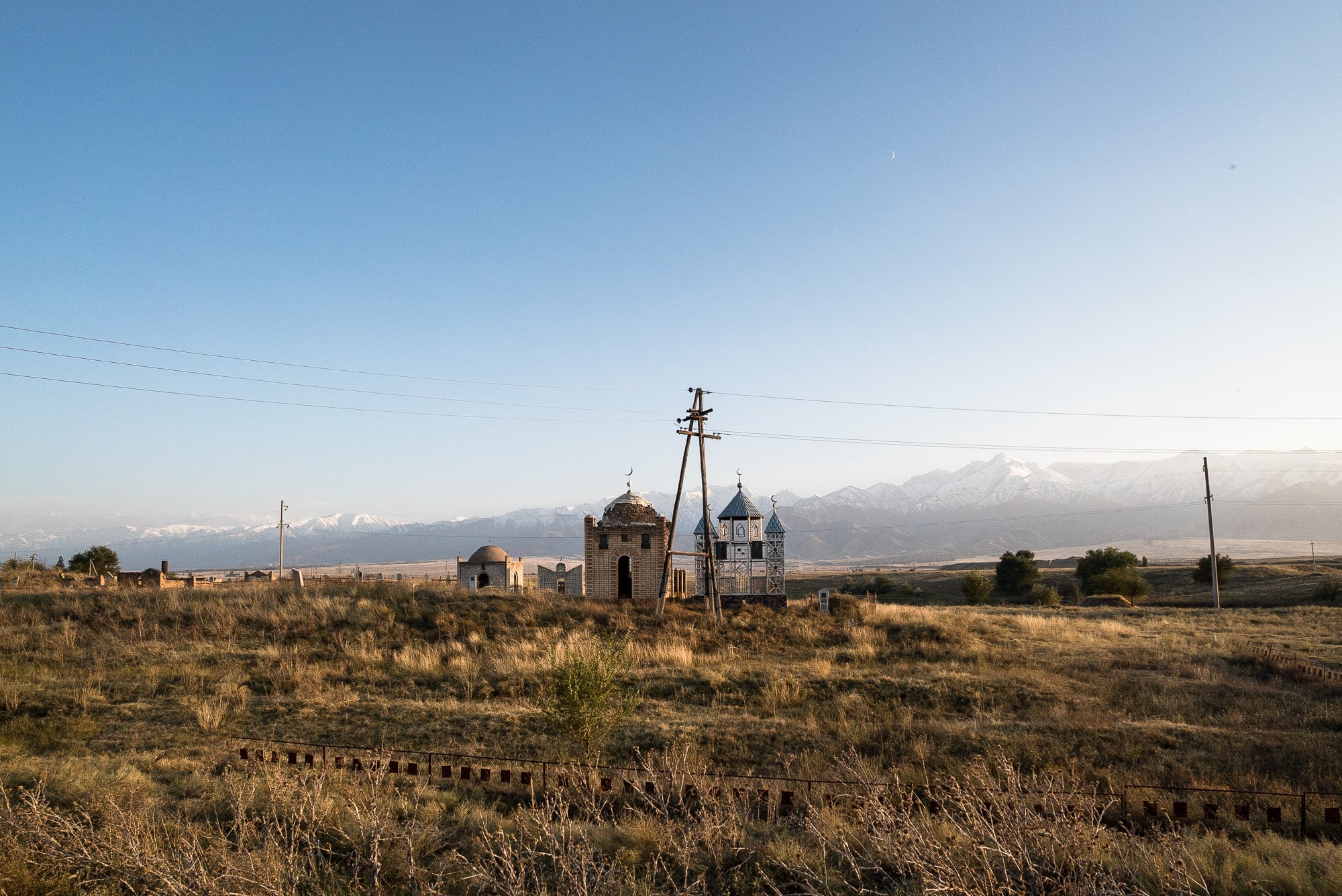 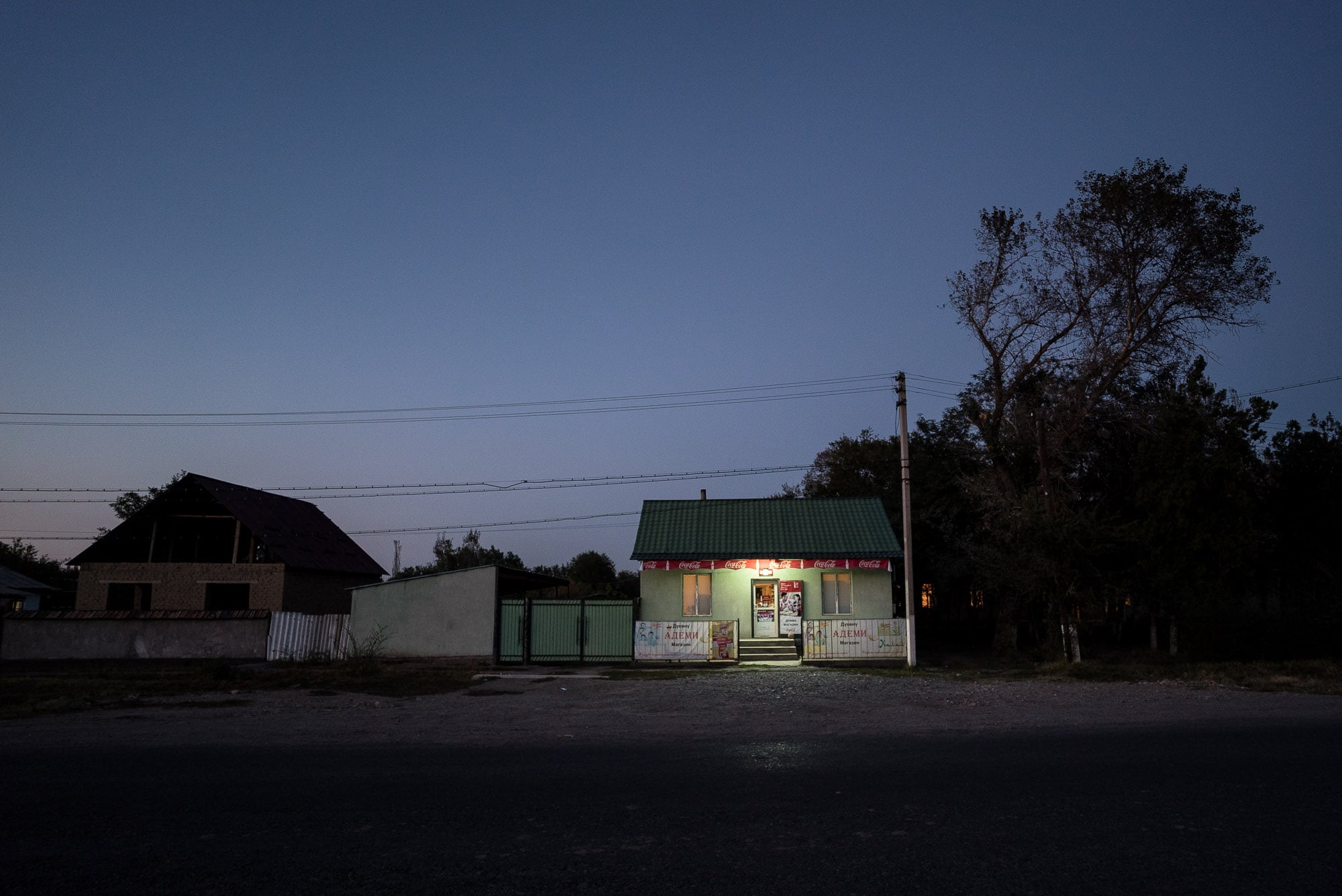 I was about 50m from the border when I finally found a hotel. It was full of people from Tadjikistan who were having dinner, but I managed to get a room and some food: 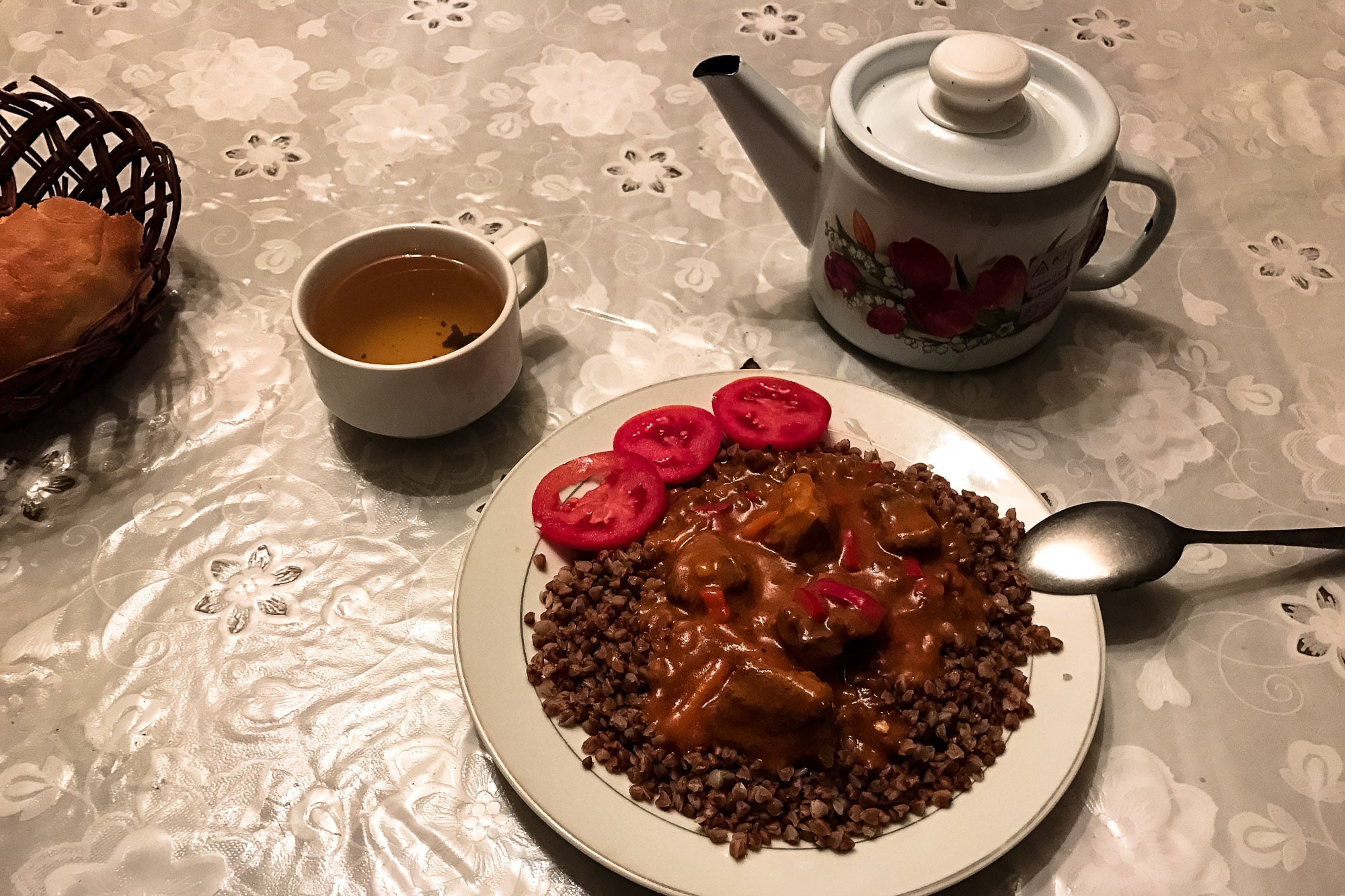 I was very happy until I found out that the bed was broken in the middle. And by broken I mean literally broken. There was a huge dent in it caused by a hole under the mattress..

I tried sleeping on the bed anyway, but I gave up after about thirty minutes. Then I went and got the air mattress from the Boose: 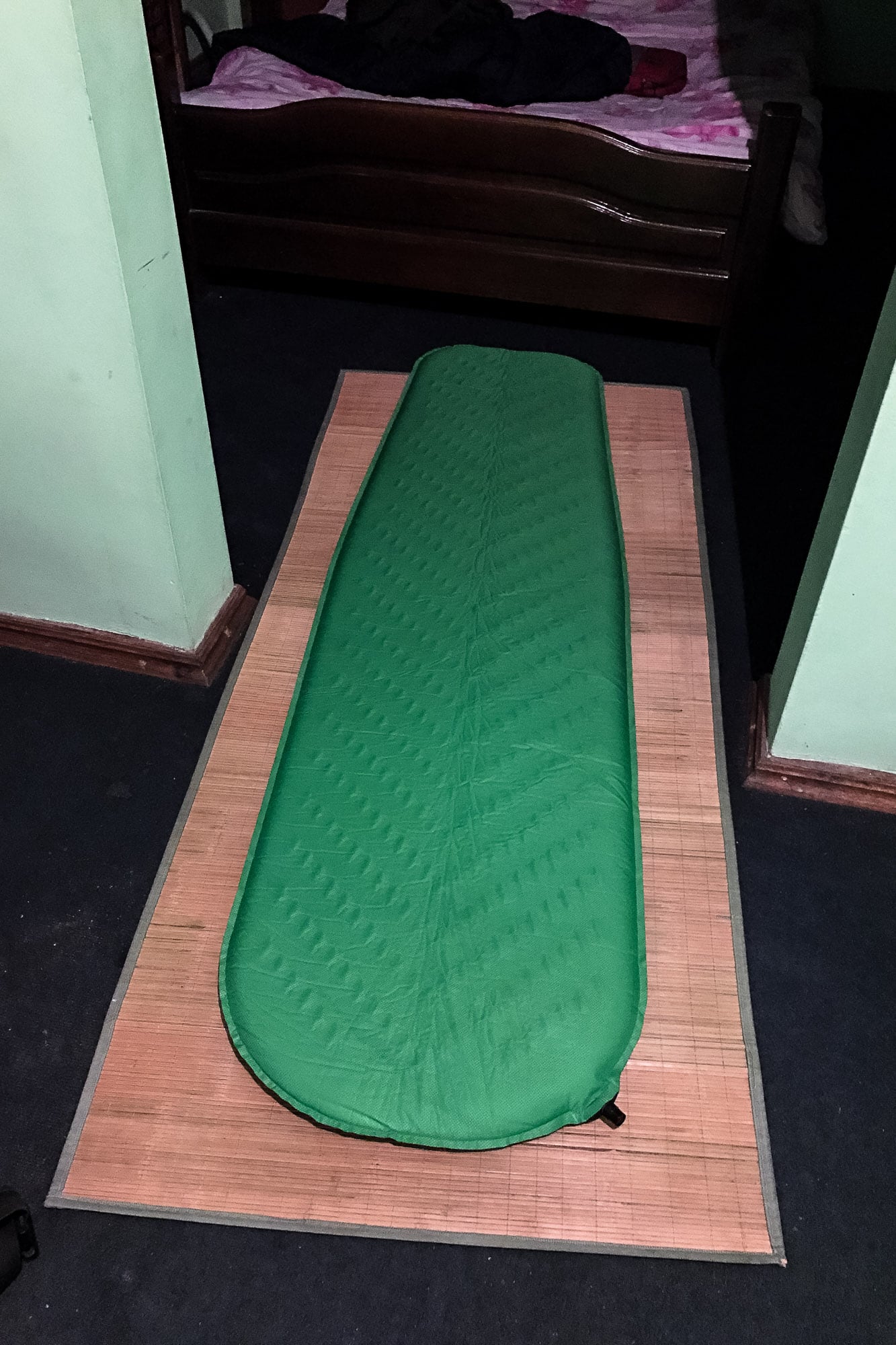 I lay down in my sleeping bag, and as I did, I could hear a mouse running around in the ceiling. It had tiny little feet and it was running really fast.

Why not, I thought, why the fuck not.