When I woke up I felt very tired. It had indeed been a noisy night. The restaurant was open 24/7, and there were always patrons who came in late at night for some tea and some snacks.

Still, I was happy about every single night I didn’t have to spend outside.

I walked for a little while, then I ran into Ablay with his horse, his dog and his herd of sheep and cattle: 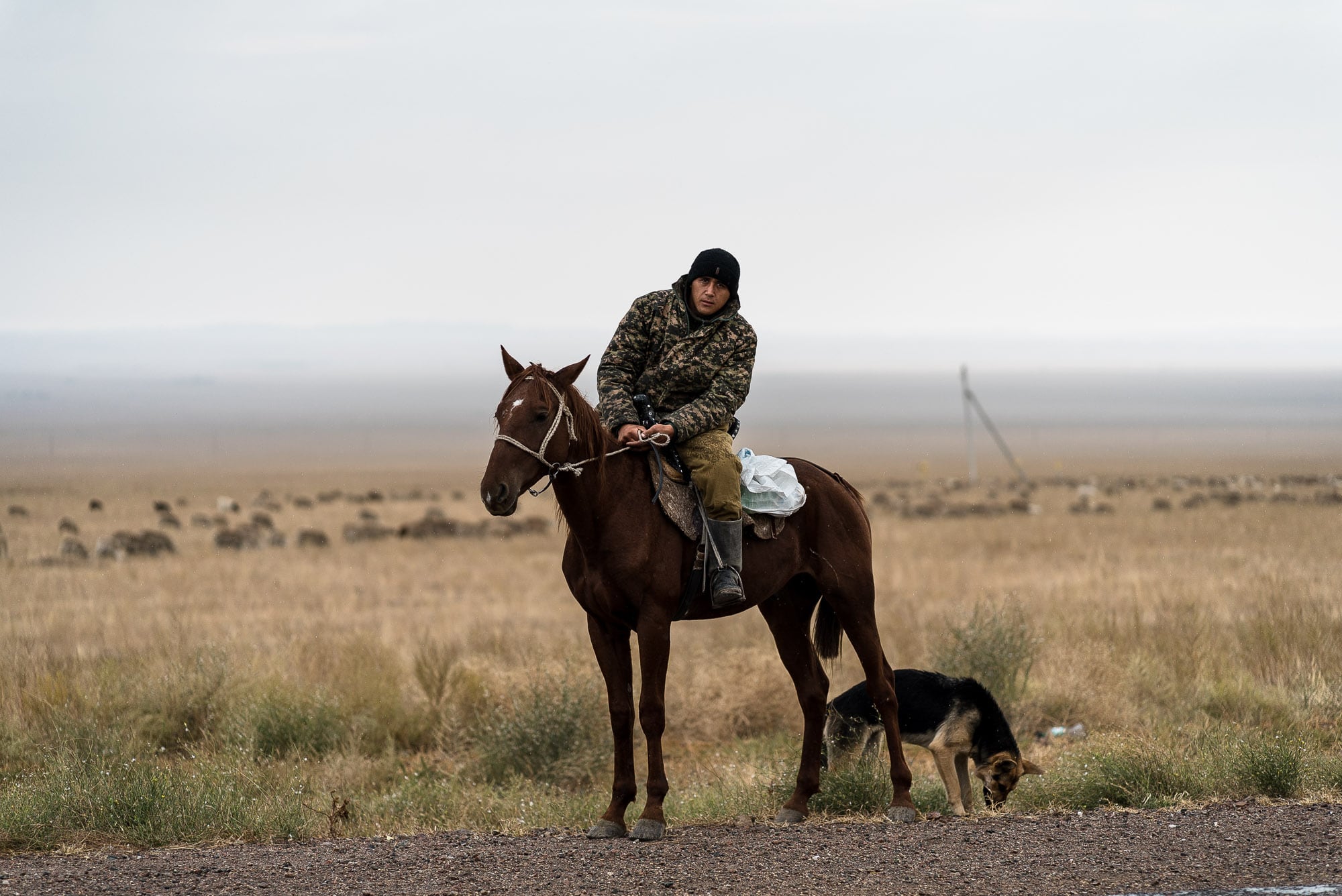 We chatted for a little while, and I never could quite figure out why he didn’t like to smile on photos: 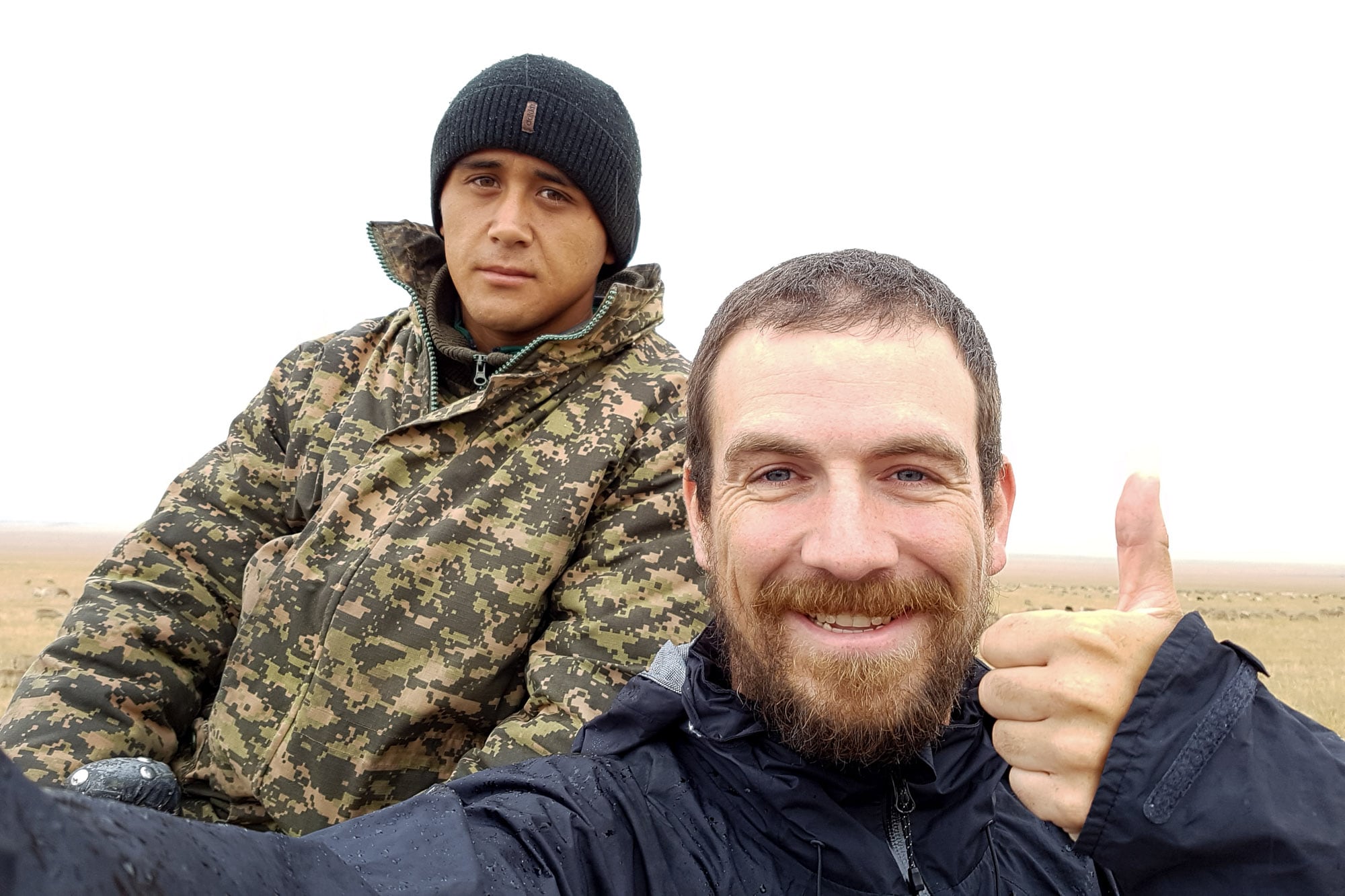 And I was happy about every nice person I met, because the morning sky looked pretty dramatic: 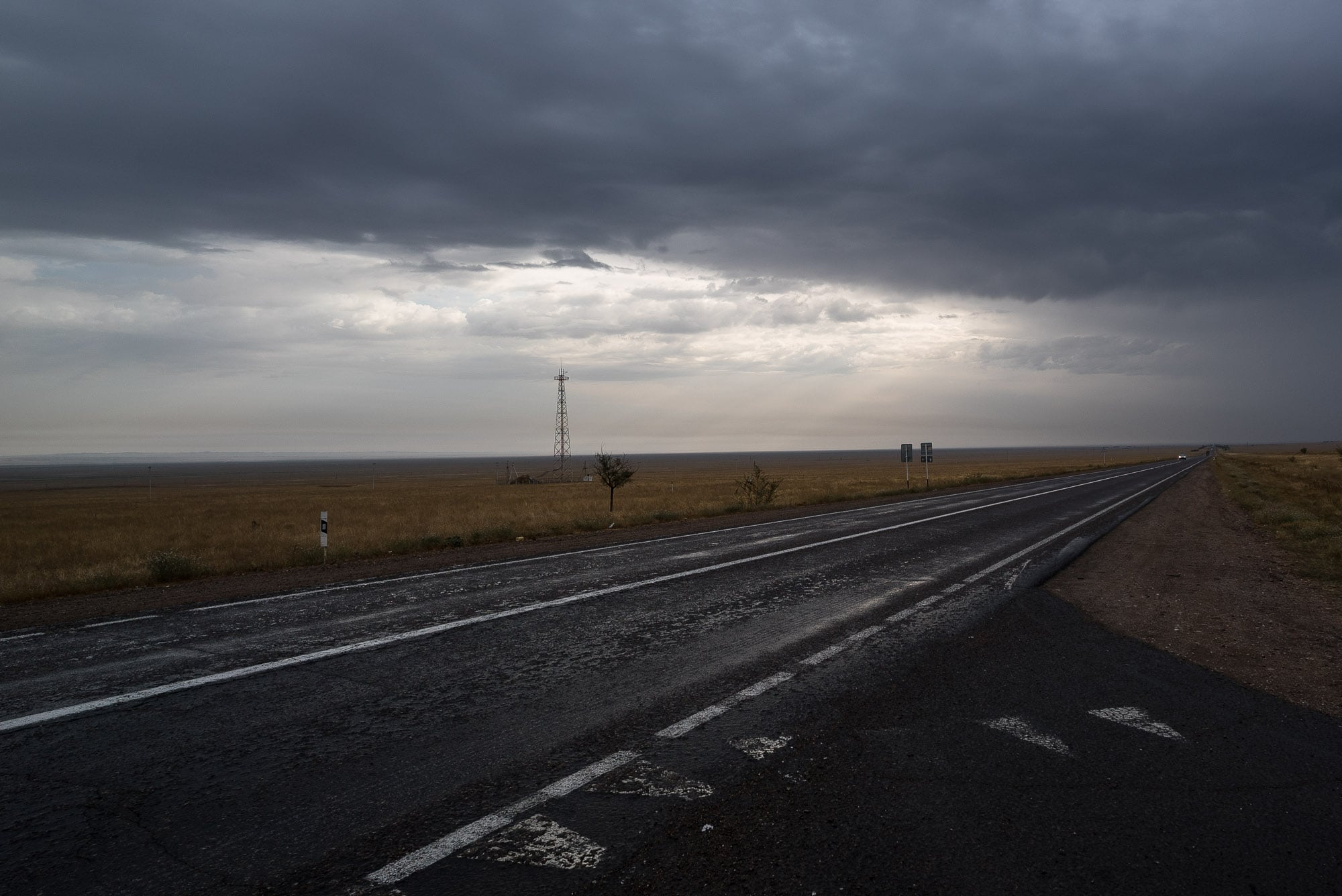 So dramatic that I gave the Caboose her rain cover that I had bought for her in Almaty: 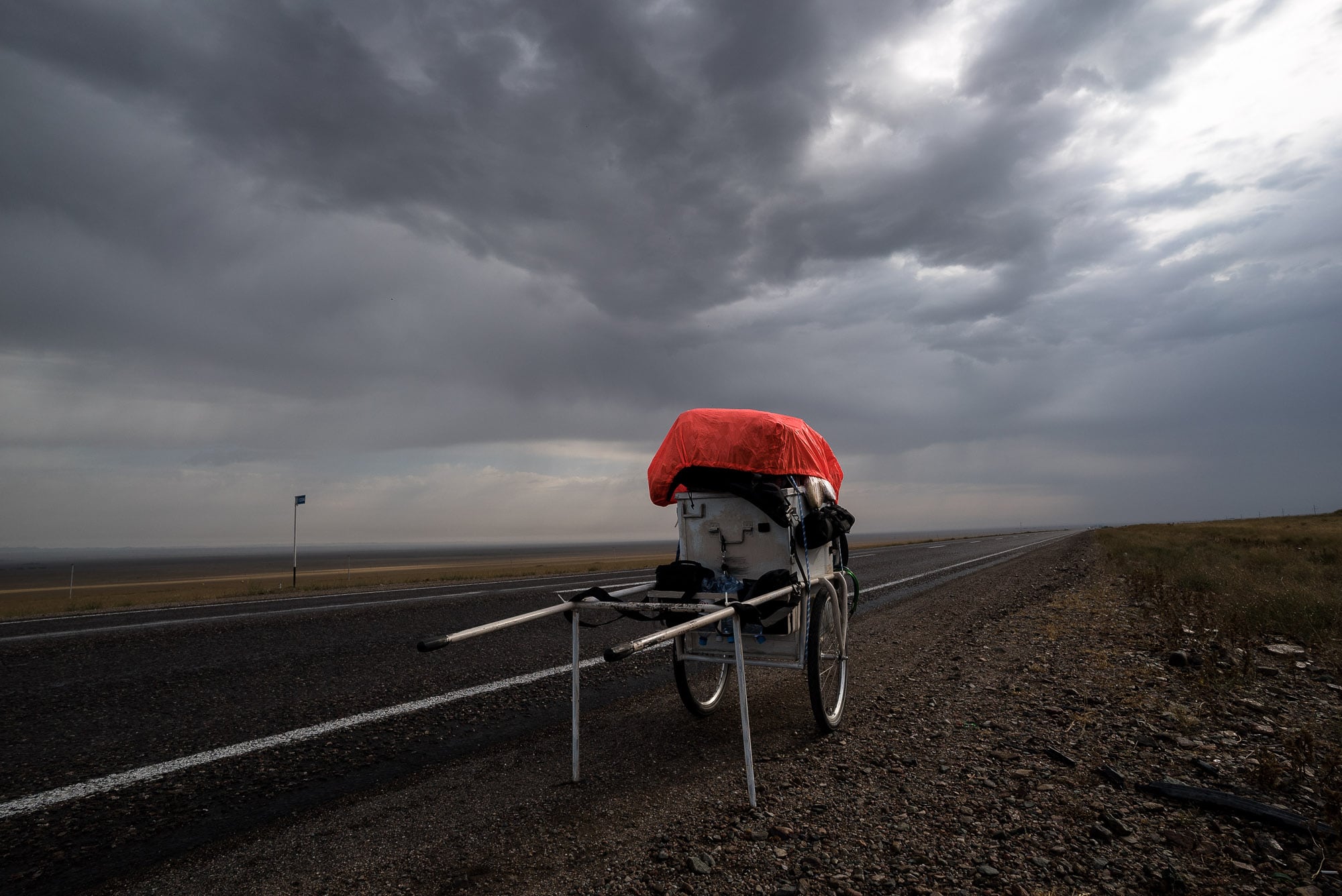 Then the sky cleared up:

And when it did and I was just sitting down to have some bread and eggs, this guy called Rachat appeared on his motorcycle: 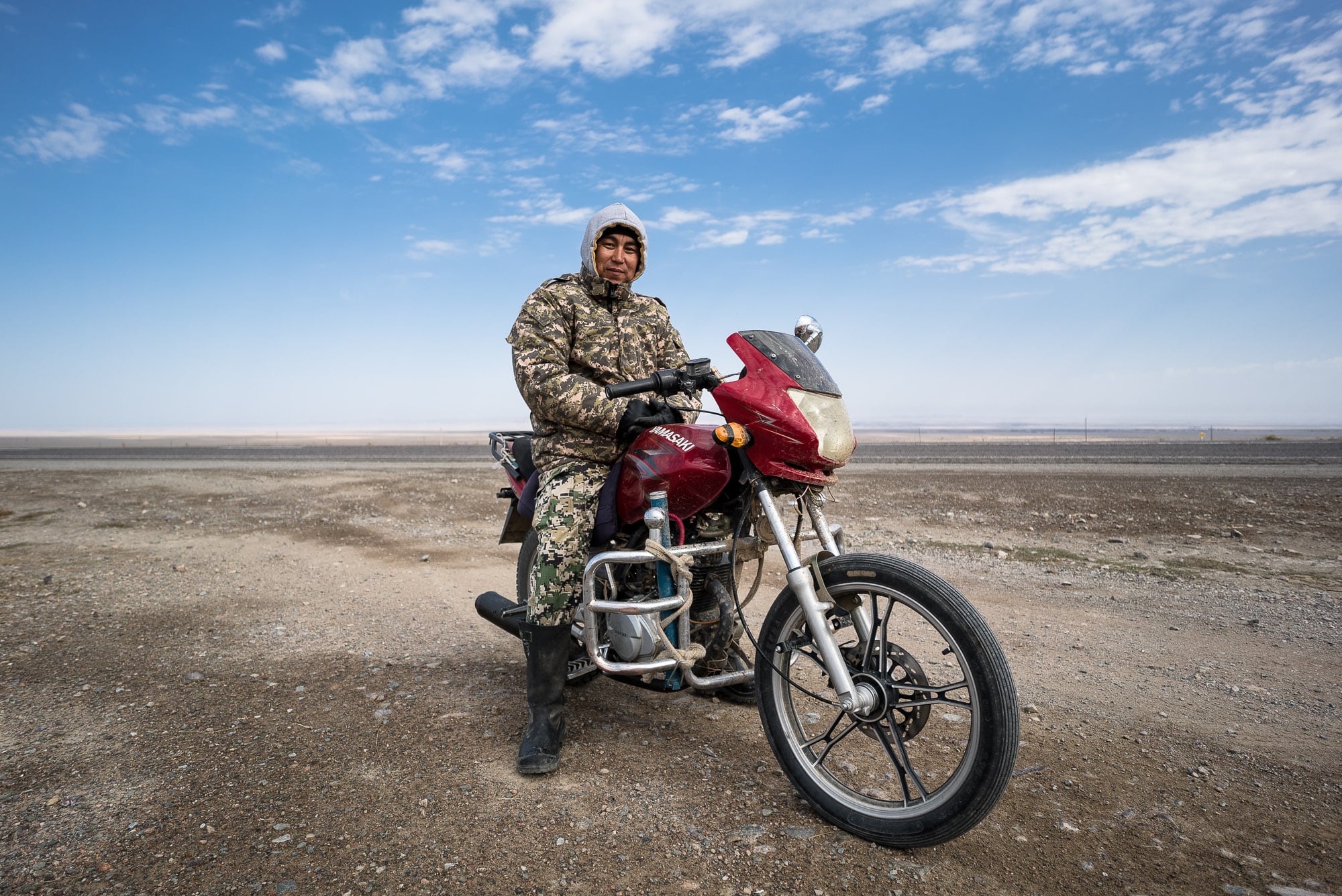 He stayed for a chat, and just like Abay before him he also didn’t like to smile on pictures.

Hm, I thought, maybe this is a cultural thing of this particular area. Men don’t smile on photos!

So I tried it, too. And it really worked: 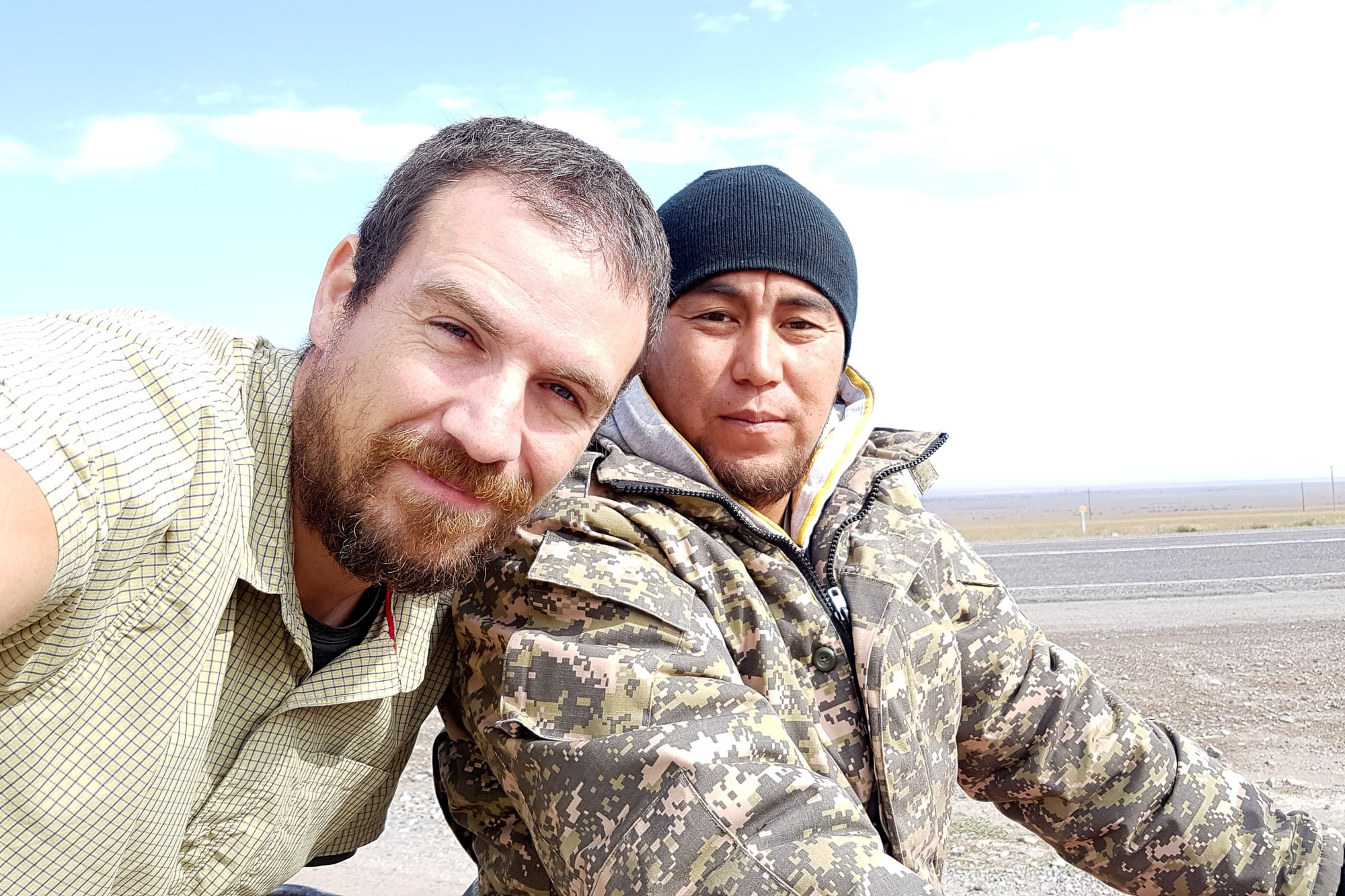 No smiles, all seriousness.

Shortly after that, I reached a checkpoint that was situated about 50km before the border: 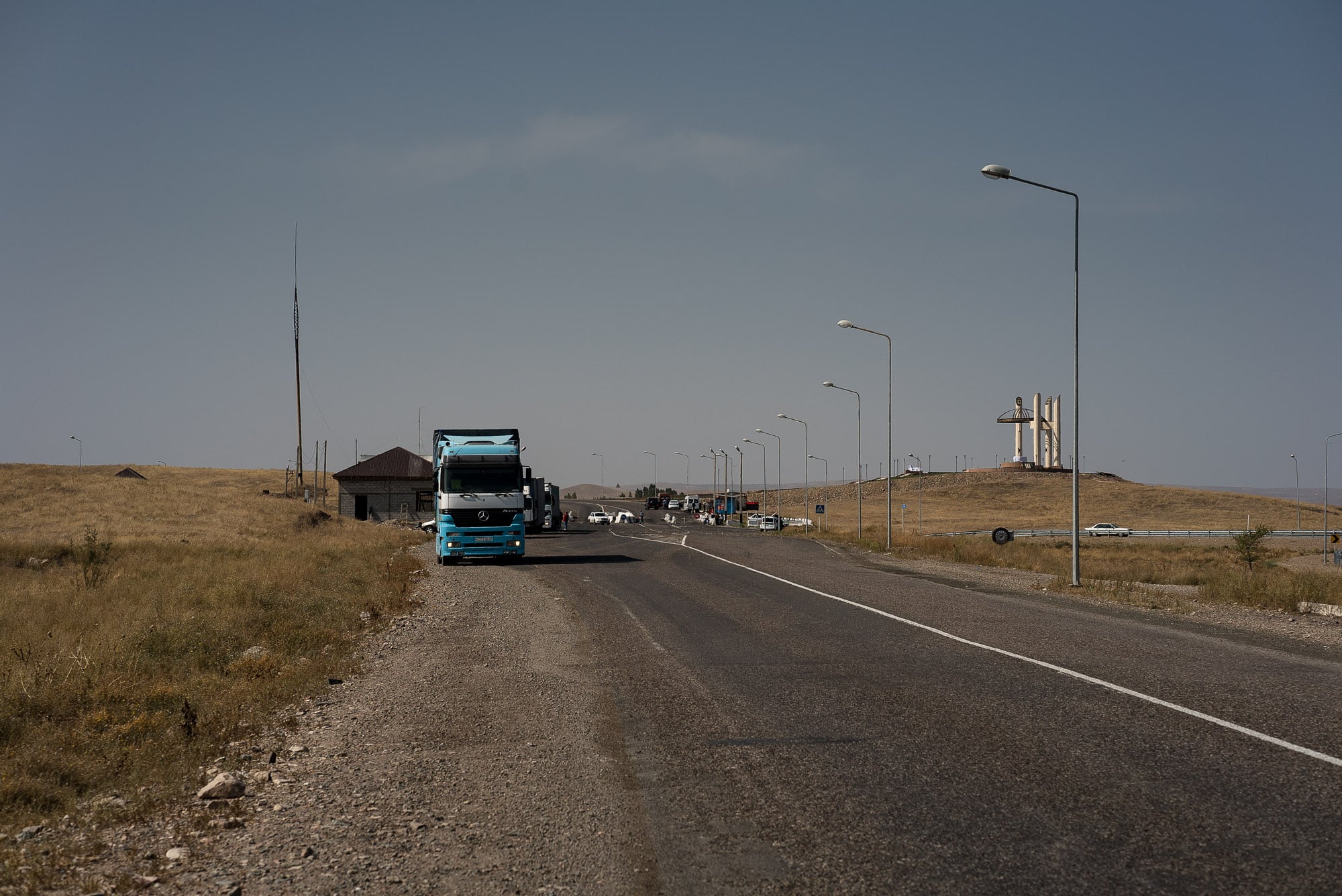 The border guards were young, and they seemed to be very bored. They kept shooting questions at me.

At some point one of them demanded to see one of my cameras. I handed it to him, upon which he jokingly asked what would happen if he dropped it.

He then went on to point the lens in all directions and take pictures.

Much to my surprise, he took a photo of me that I ended up liking quite a bit: 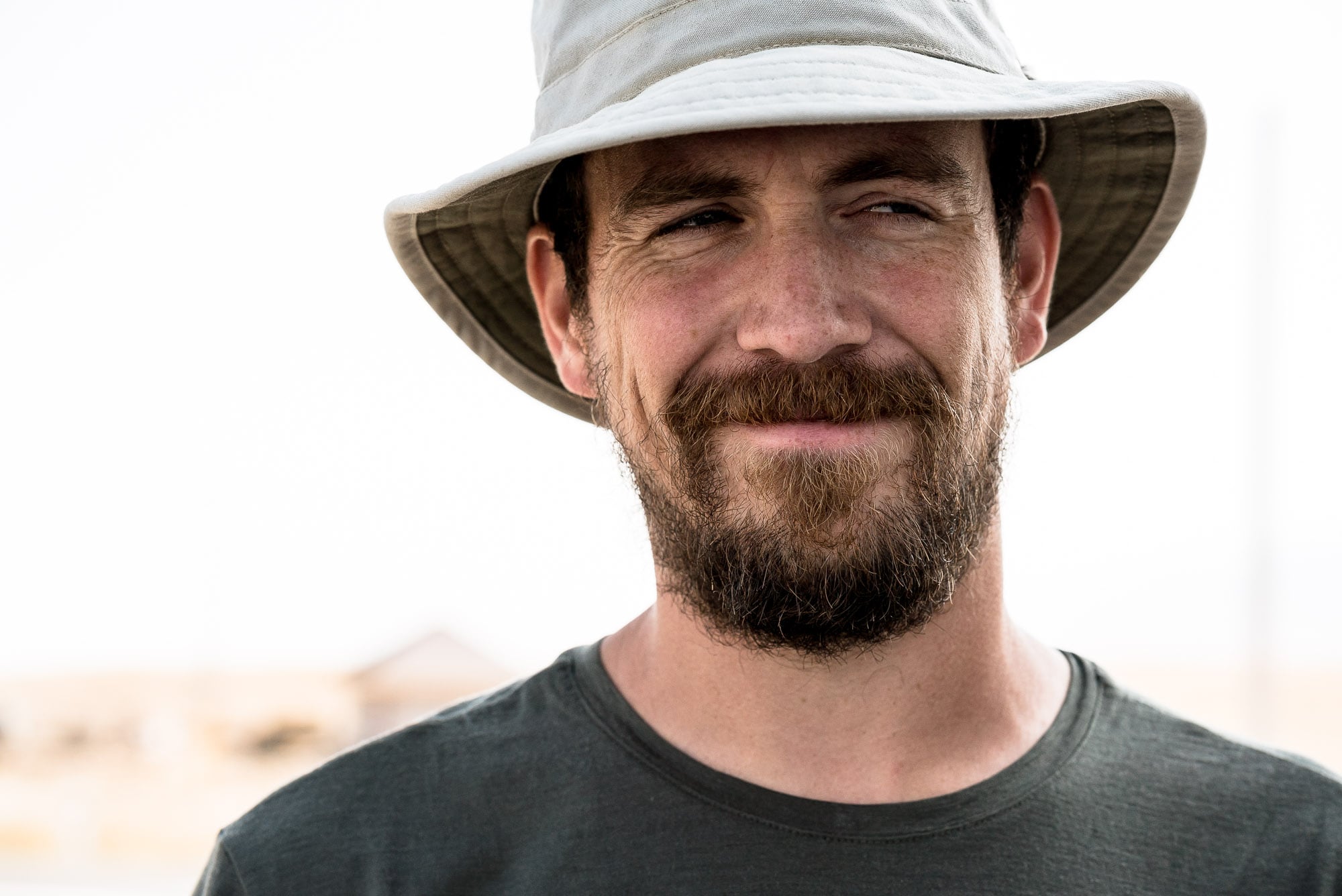 There was some kind of monument next to the checkpoint: 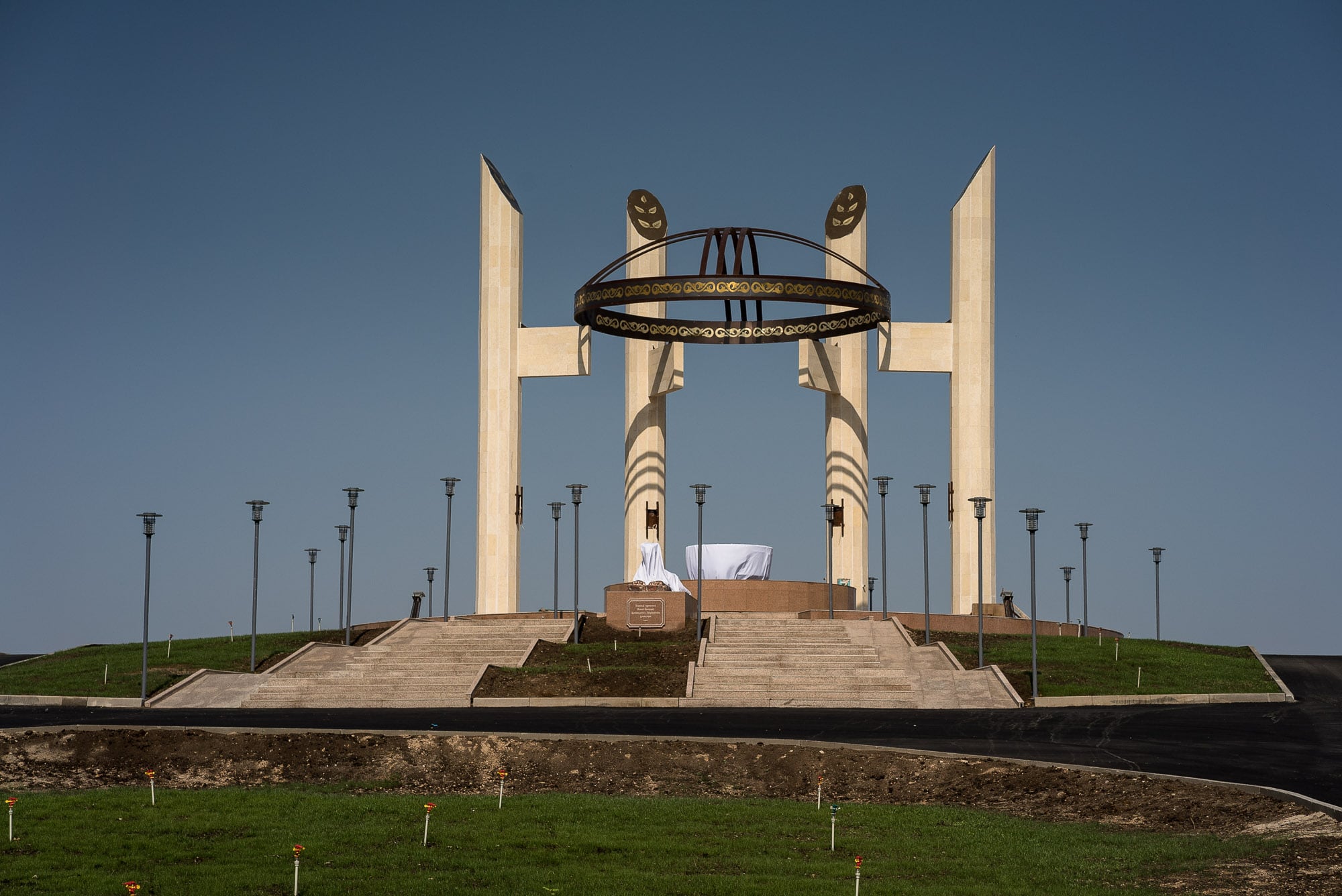 But a drunk old man appeared from behind it and started blabbering in my direction, so I decided to not stick around.

I was back in the mountains again, so I needed whatever strength I had:

There was not much up there.

One time I saw a little shop that claimed to be open 24/7: 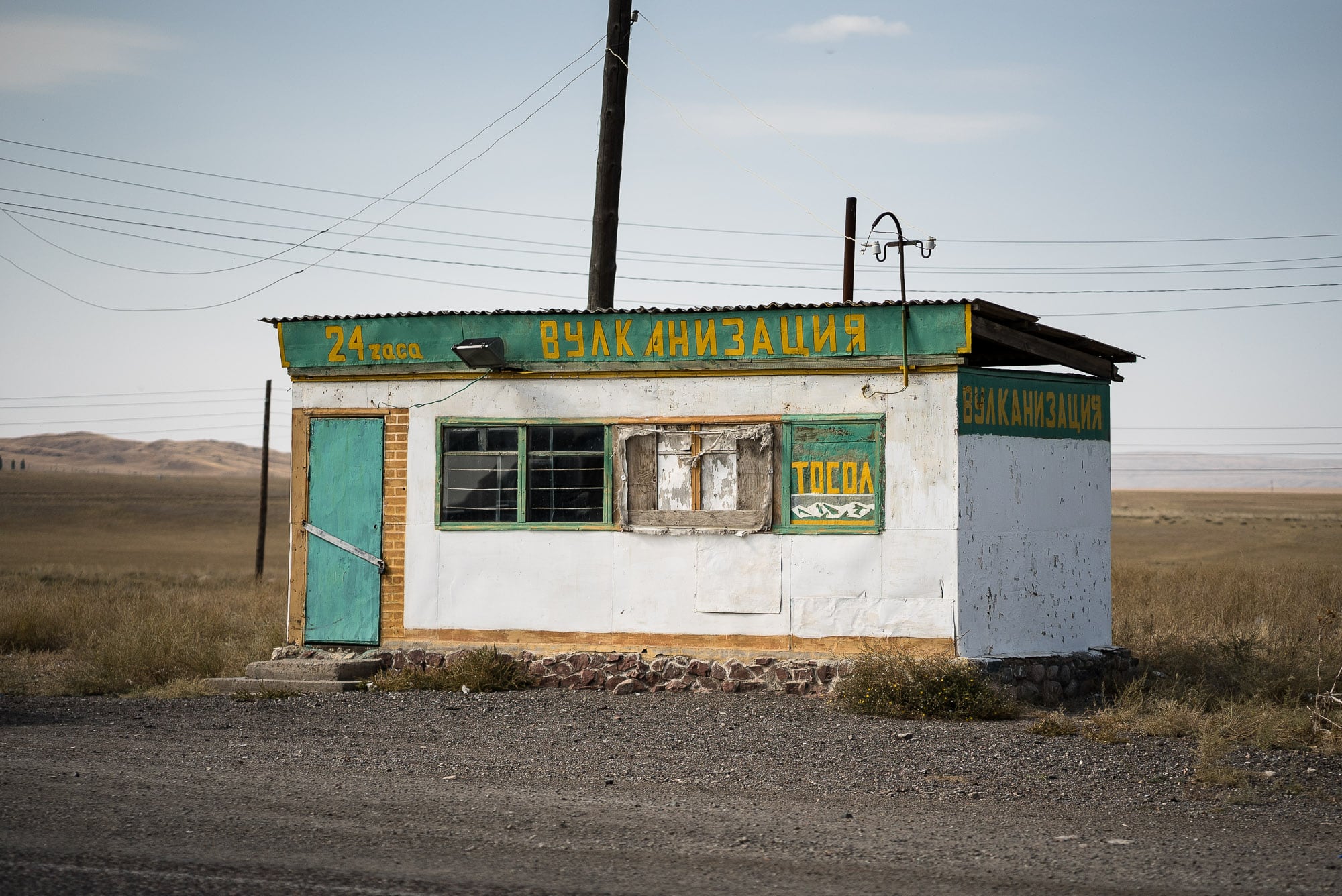 One time I saw a Soviet monument, the first one I had seen in Kazakhstan: 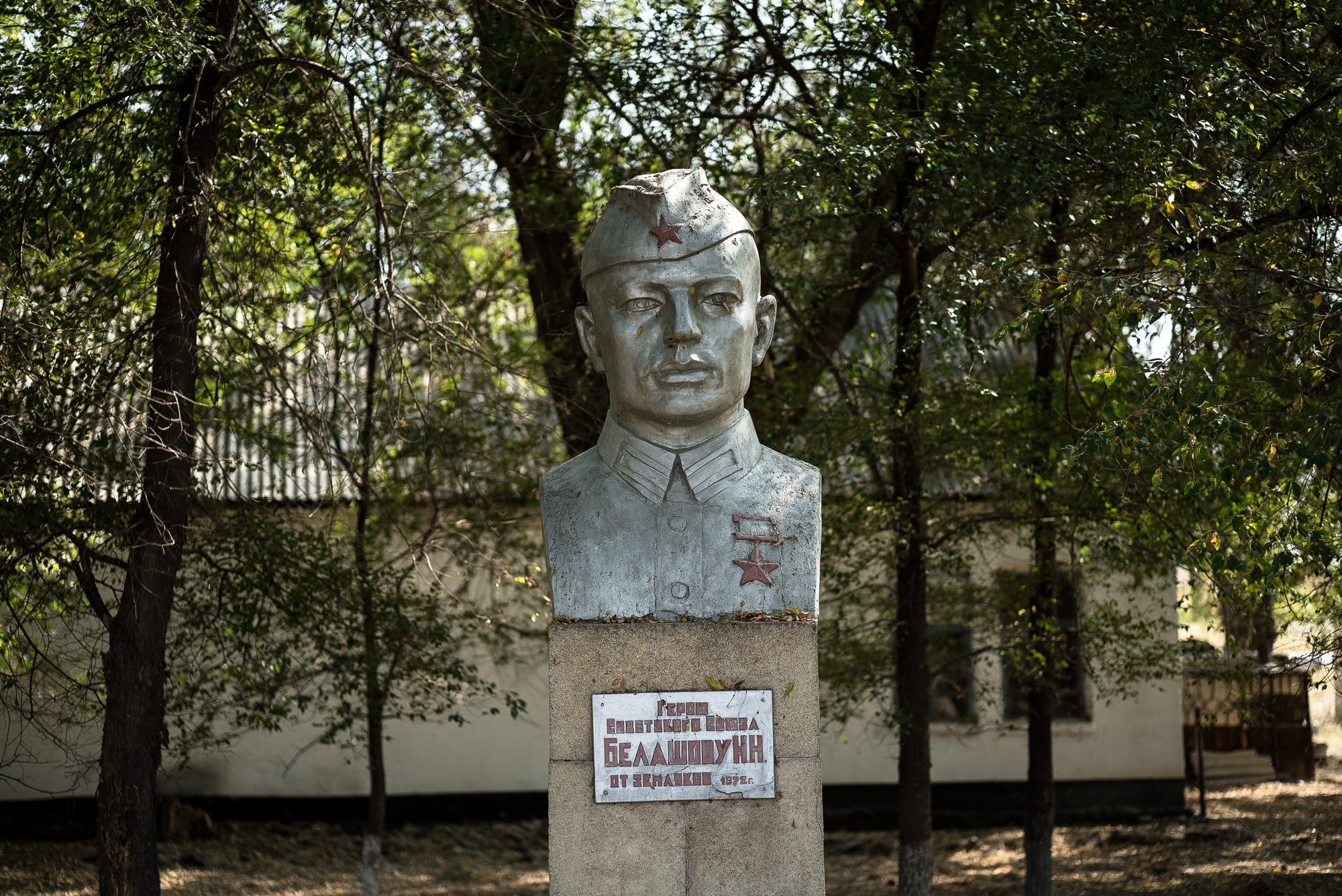 And one time I saw a German gas pump: 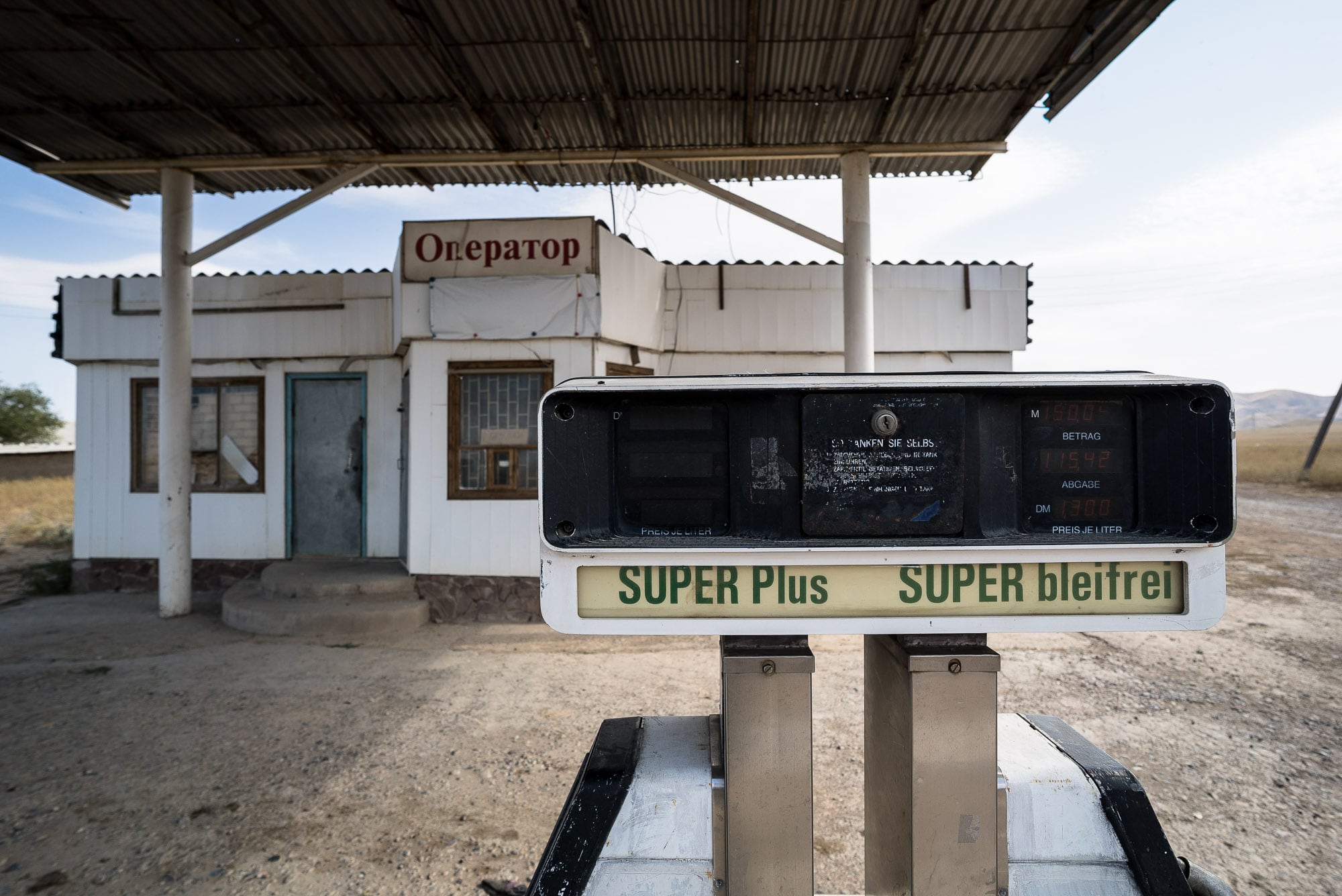 It was apparently out of order.

Besides that, it was just steep uphill slopes: 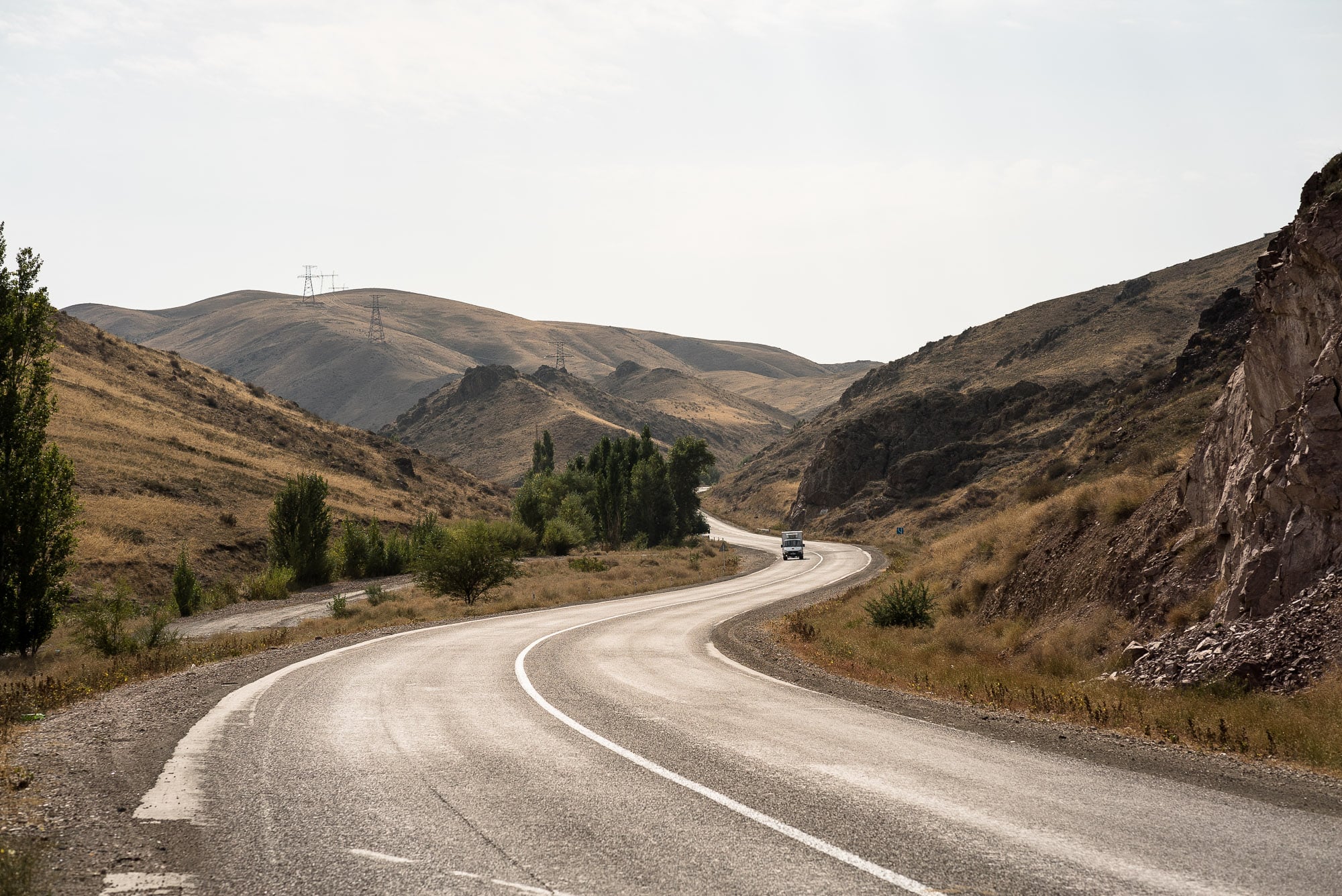 Uphill slopes for about 10km, during which I gained about 500m in altitude: 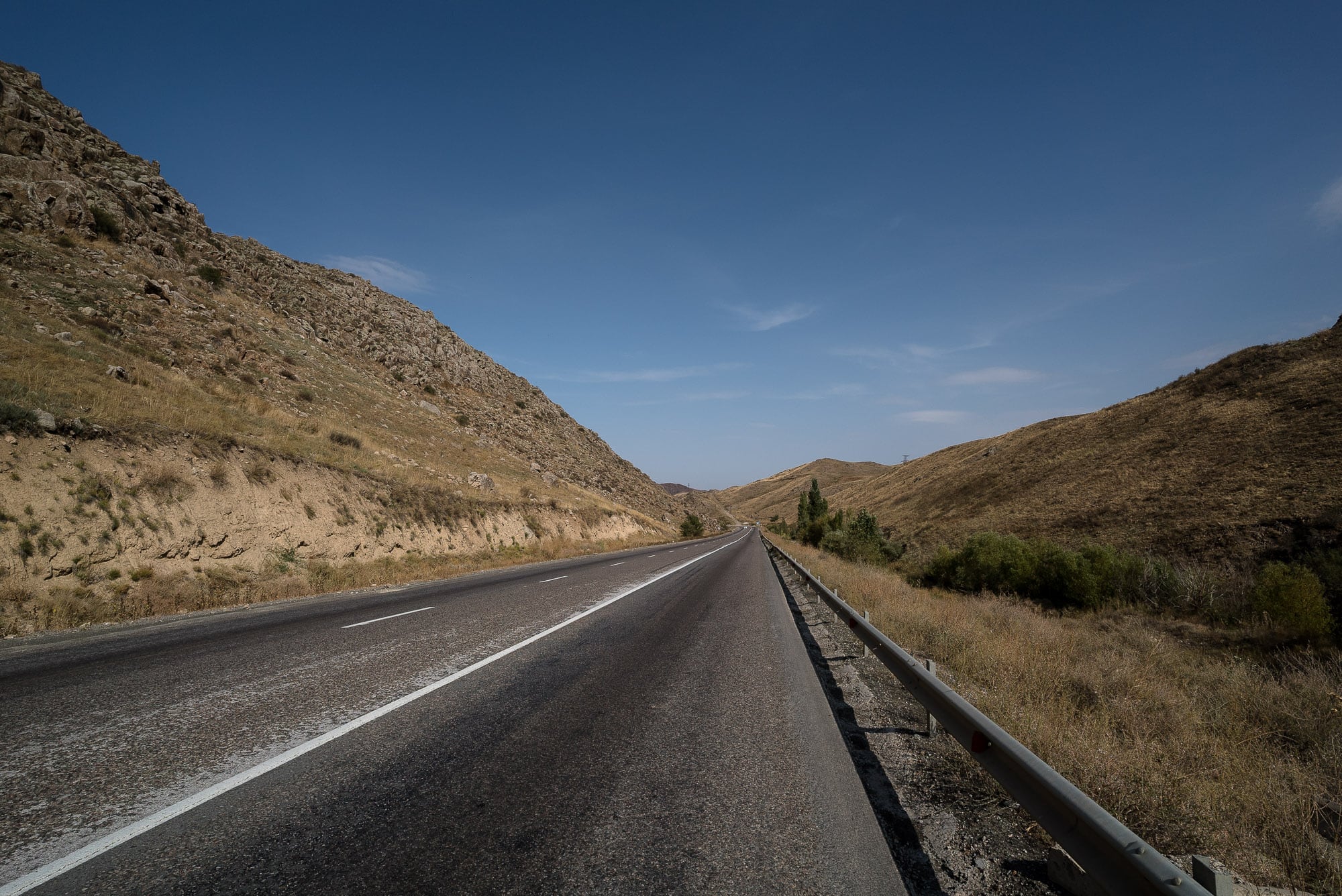 Then I was at the top.

I sat down and had a bottle of ice-tea that I had been saving for this moment.

There was a grave nearby: 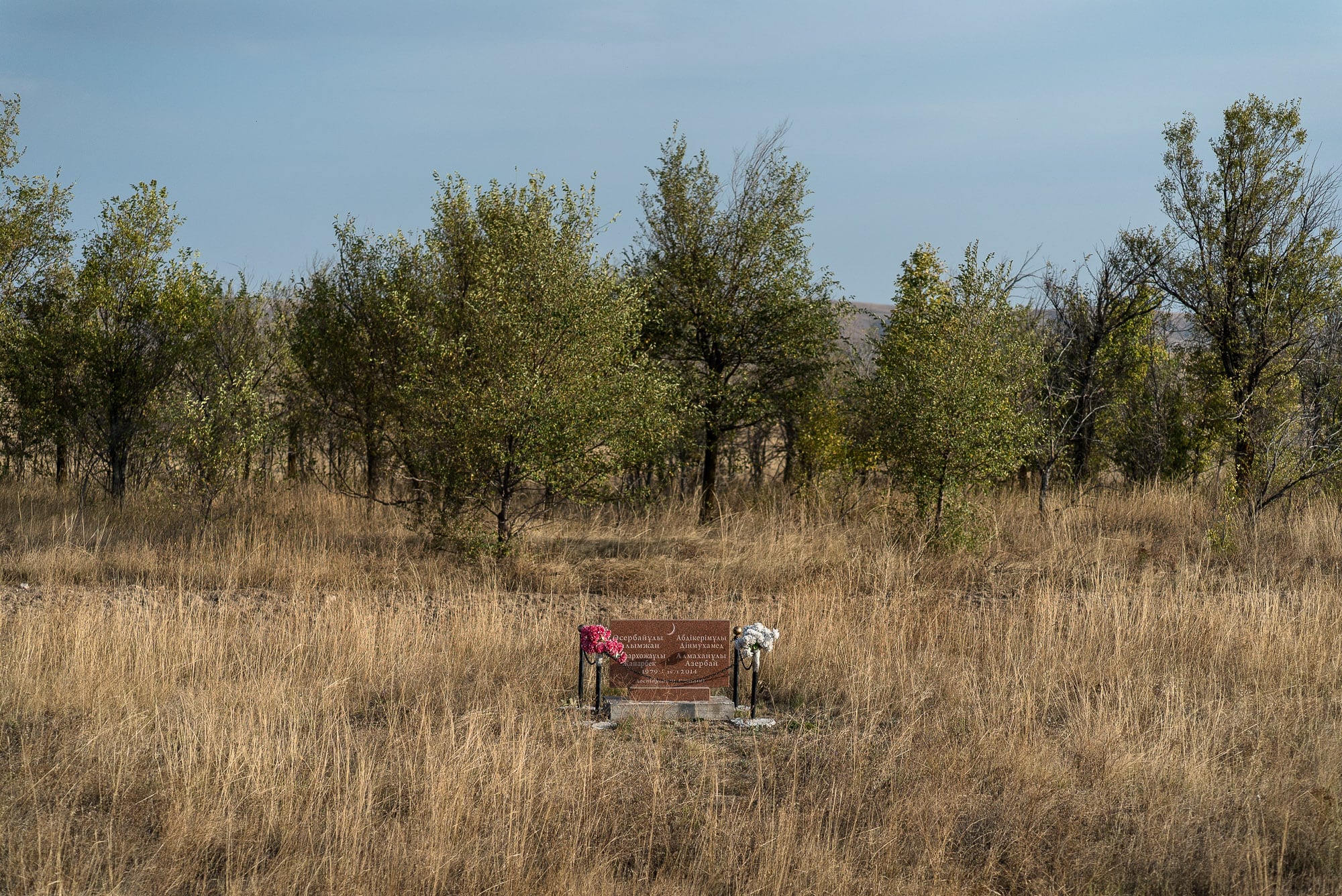 It was almost six in the evening. The sun would be gone within one hour, and I needed a place to sleep.

I passed by a house, but it didn’t look very inviting: 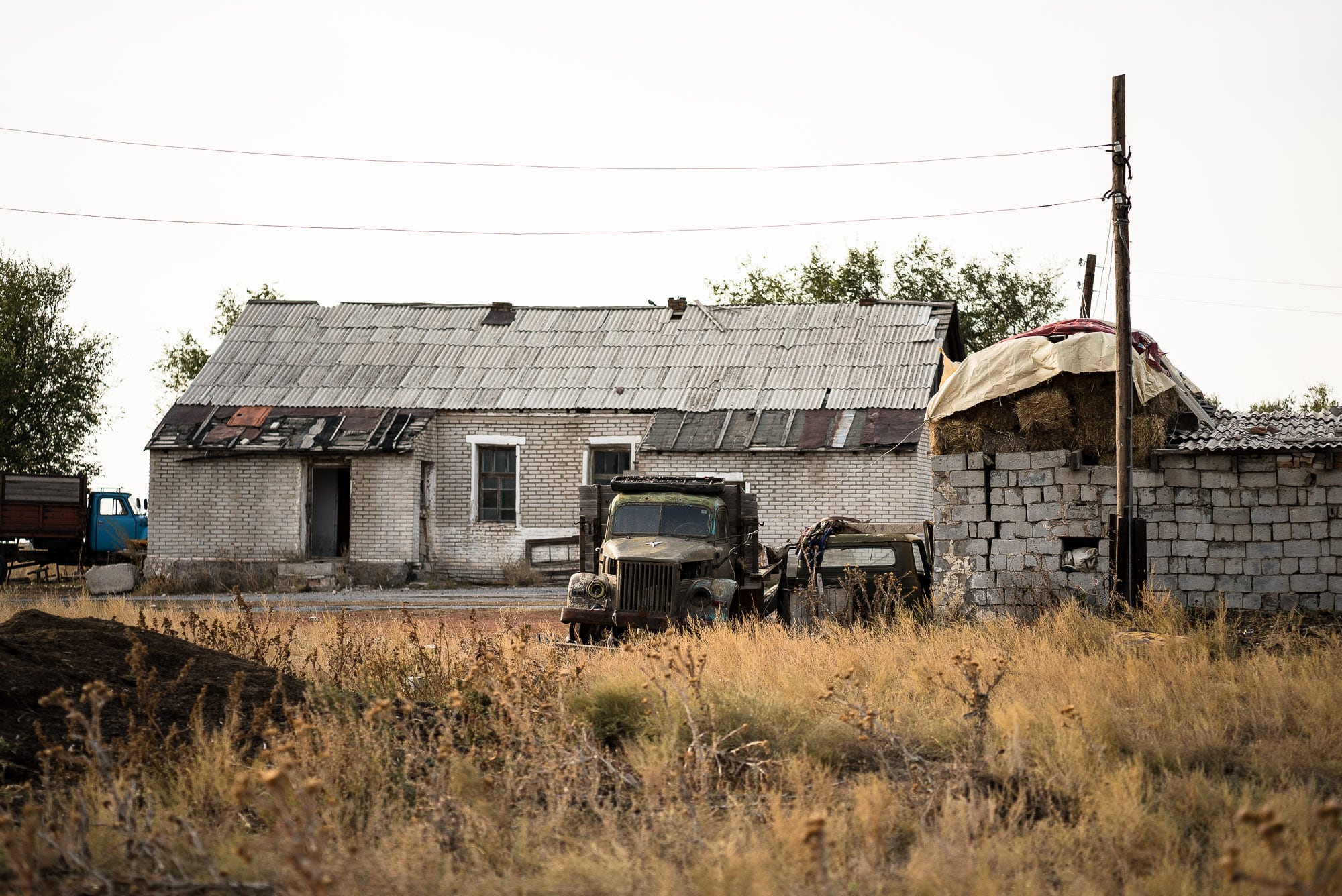 So I kept going.

I quickly learned to regret this decision. There was nothing up there on Korday pass, and the sun was setting quickly: 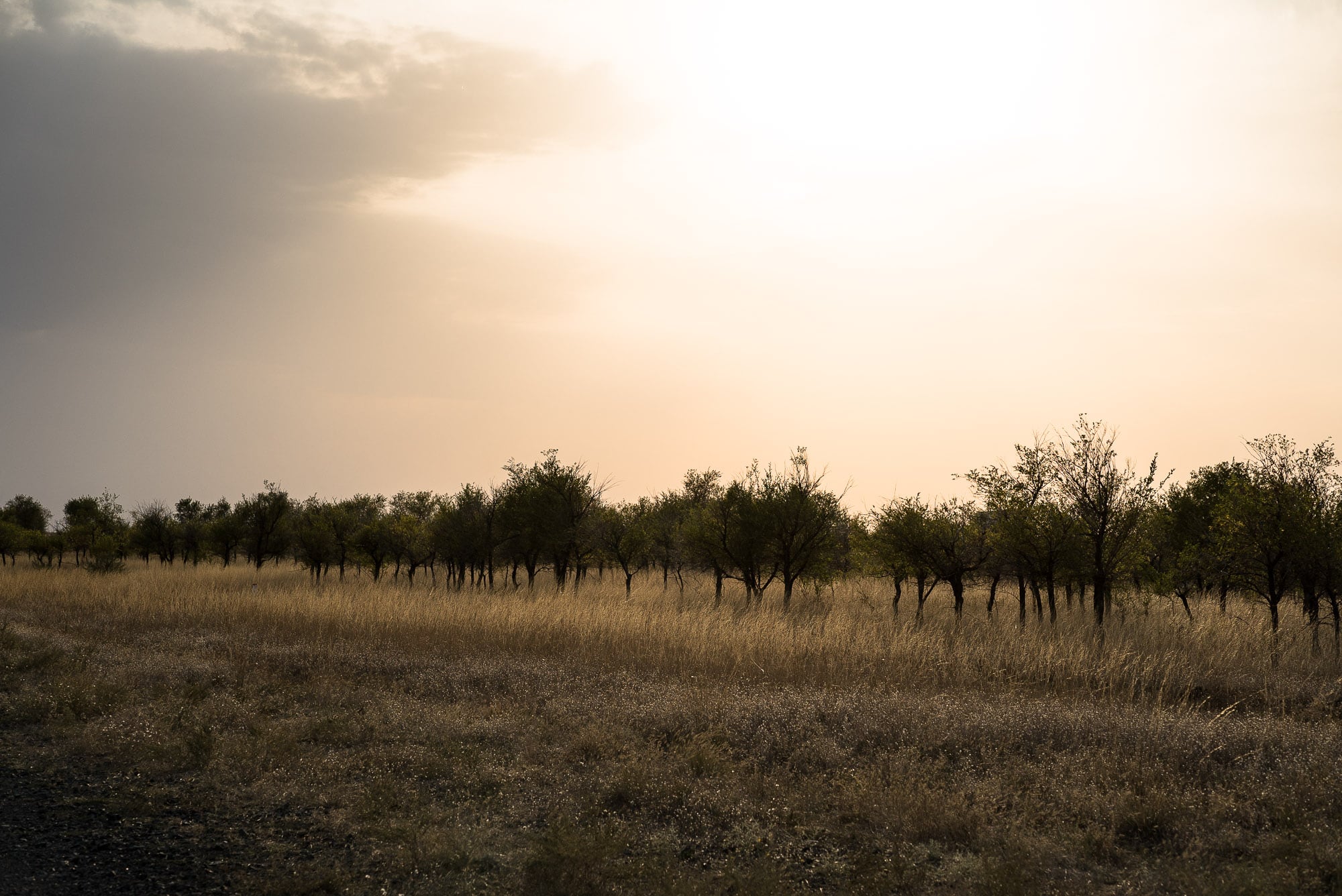 I found a place that was a bit out of sight from the road. There didn’t seem to be any snakes around: 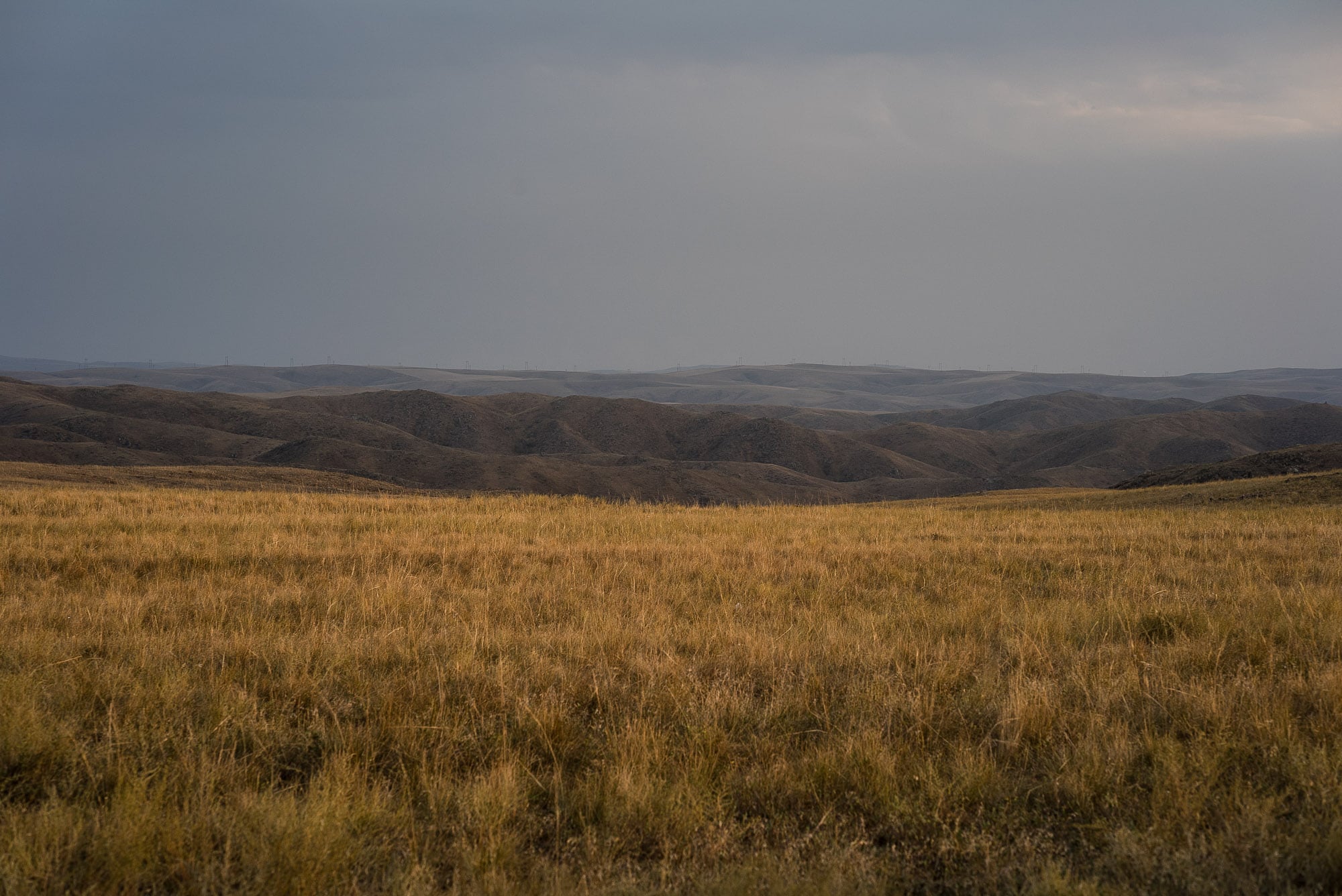 So I set up camp there:

Still, I had a nice dinner of canned beans and canned corn.

Then I lay down in the tent and set up the camera outside to catch a bit of that night sky: 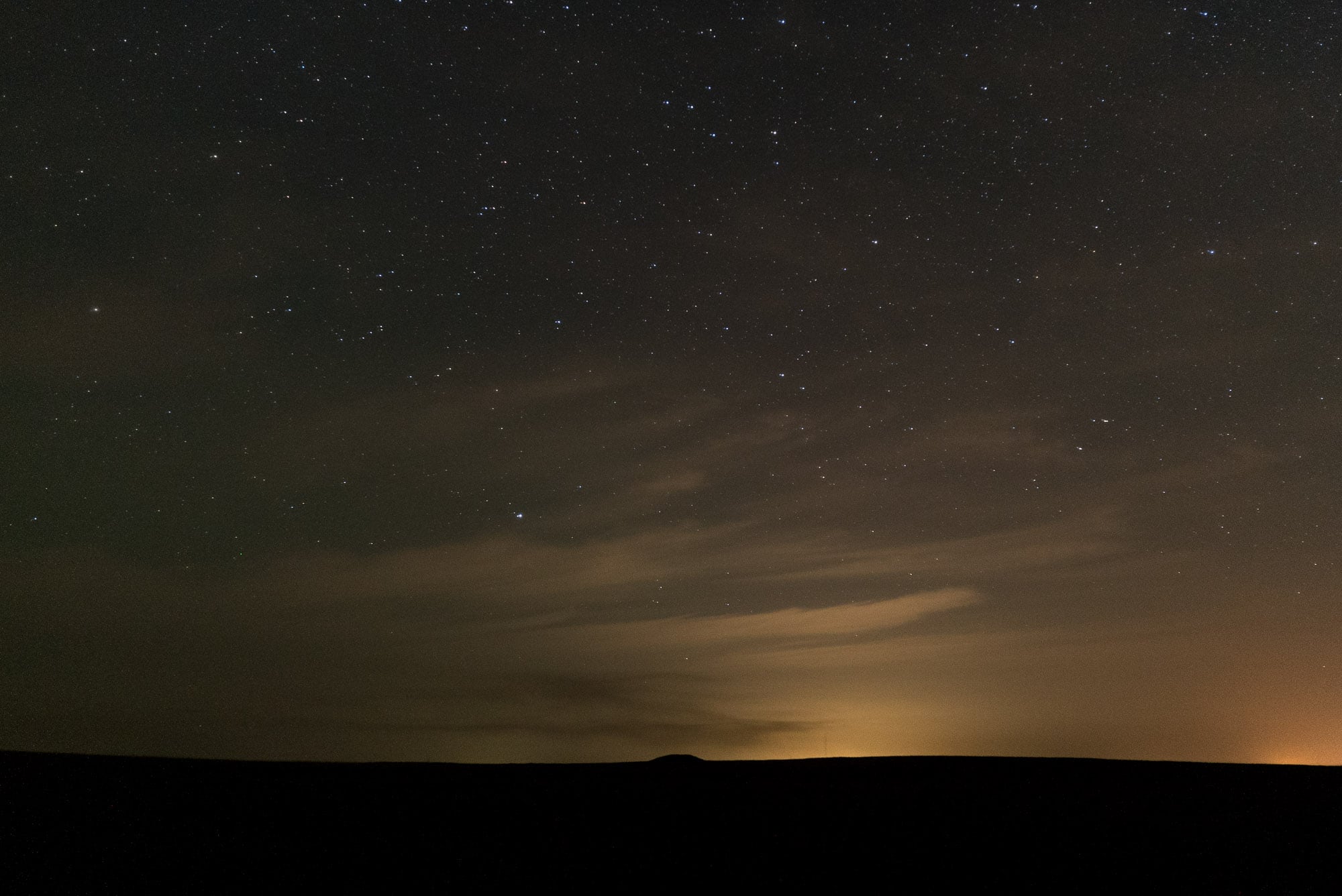 If you want to see it moving, look at this short clip I patched together:

Now what I didn’t know at that time was that I wouldn’t have to worry about wolves. And not about snakes either. Nor about the cold.

But about those clouds you can see in the video.

For they kept coming and piling up above Korday pass, and when they had all come together at about three at night they decided to turn into a big fat thunderstorm.

I woke up because I heard thunder coming near, and because the inside of the tent turned white from lightning ever so often:

And I was scared.

They say the average person’s chance of getting struck by lightning isn’t one in a million. It’s one in nine hundred thousand.

But I figured this ratio would probably go up substantially should one decide to camp out on a high plateau during a thunderstorm.

I was so scared.

Day 516
from Ak-Bulak to thunder hill