Finally, I stepped out of the door, got my Caboose, loaded her up and started walking again.

The land was vast and empty.

Sometimes I would see people harvesting: 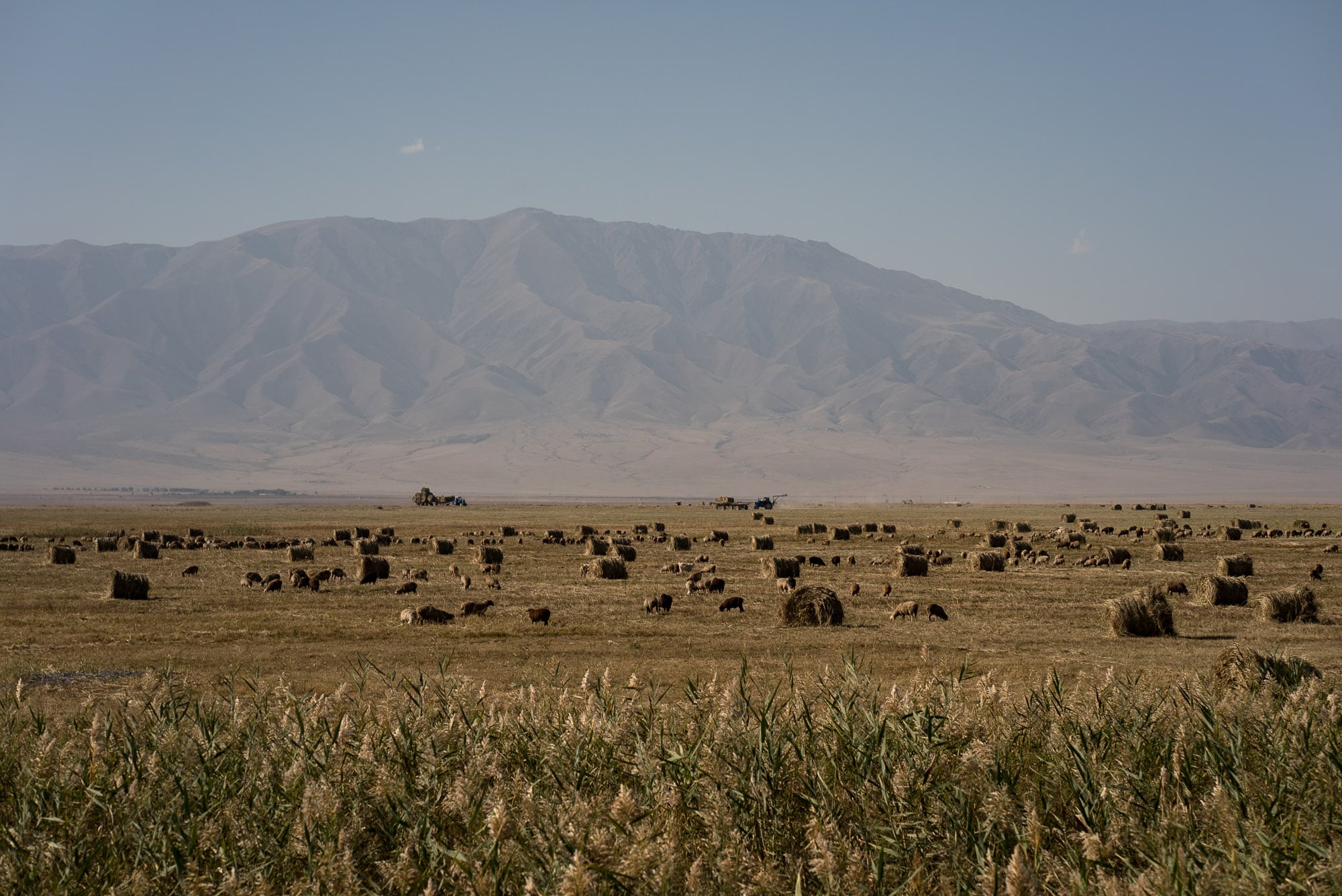 Sometimes I would see farmhouses: 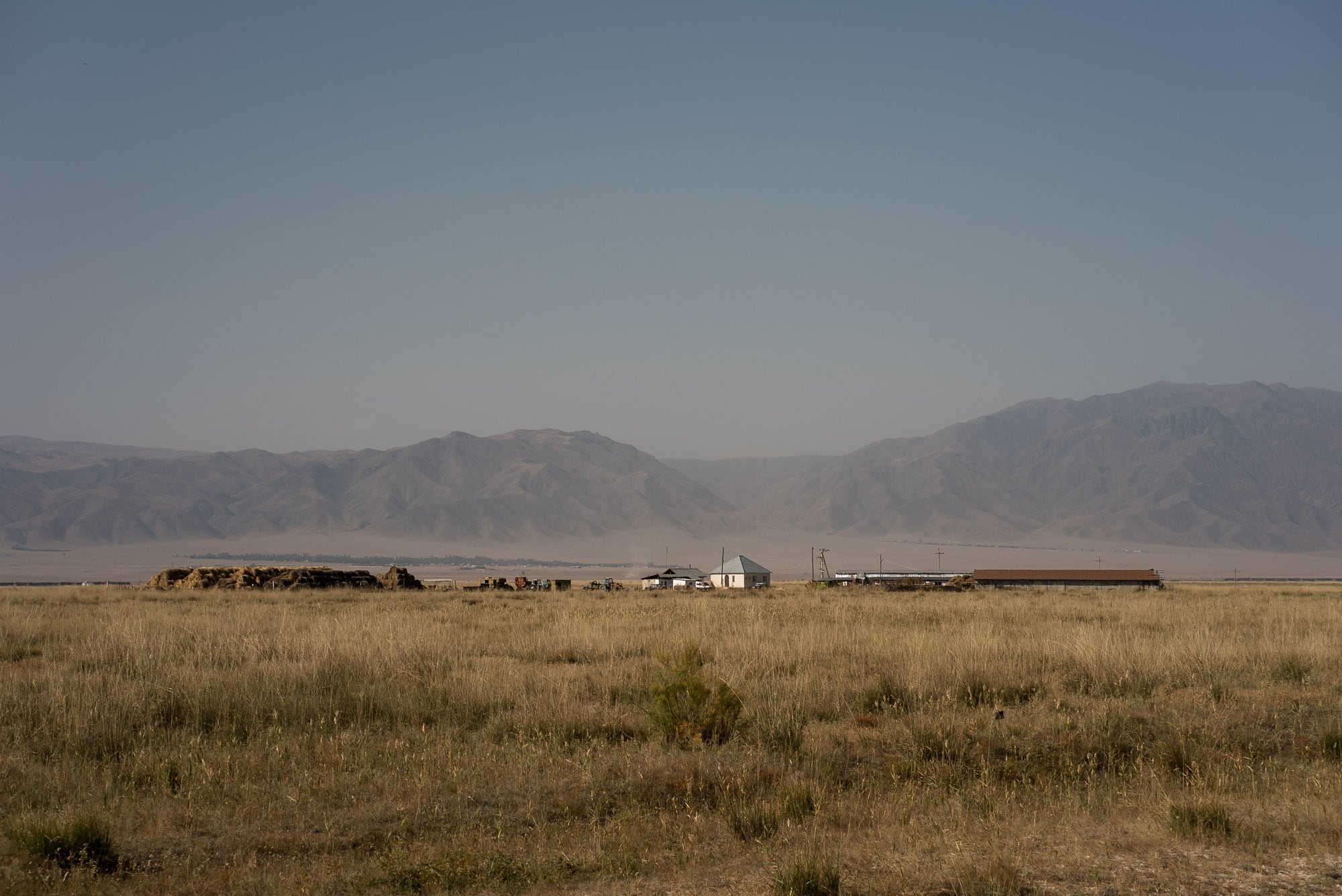 Sometimes I would see people, like this old lady waiting for someone to take her to the village: 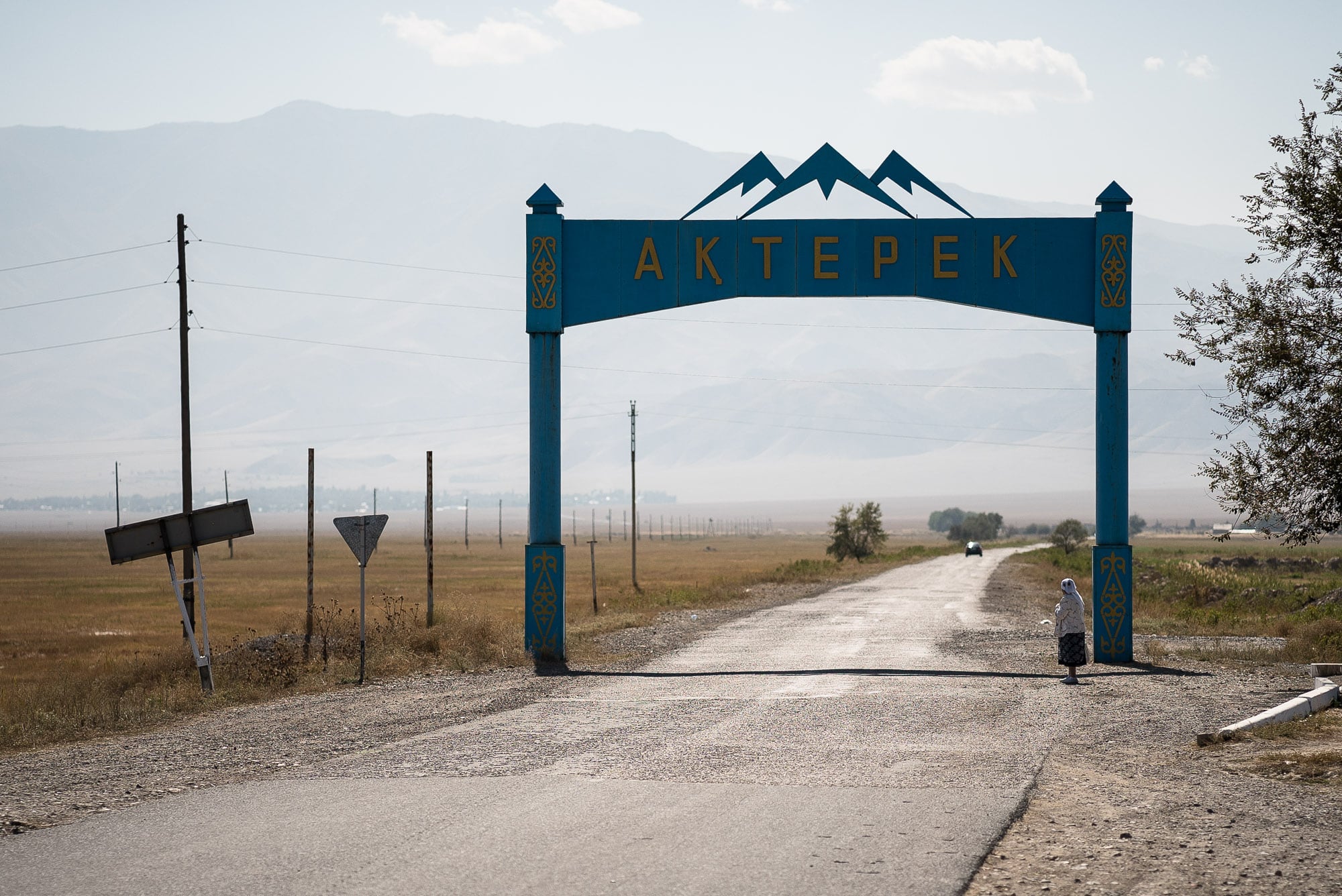 Or cows just hanging out:

But mostly it was just emptiness: 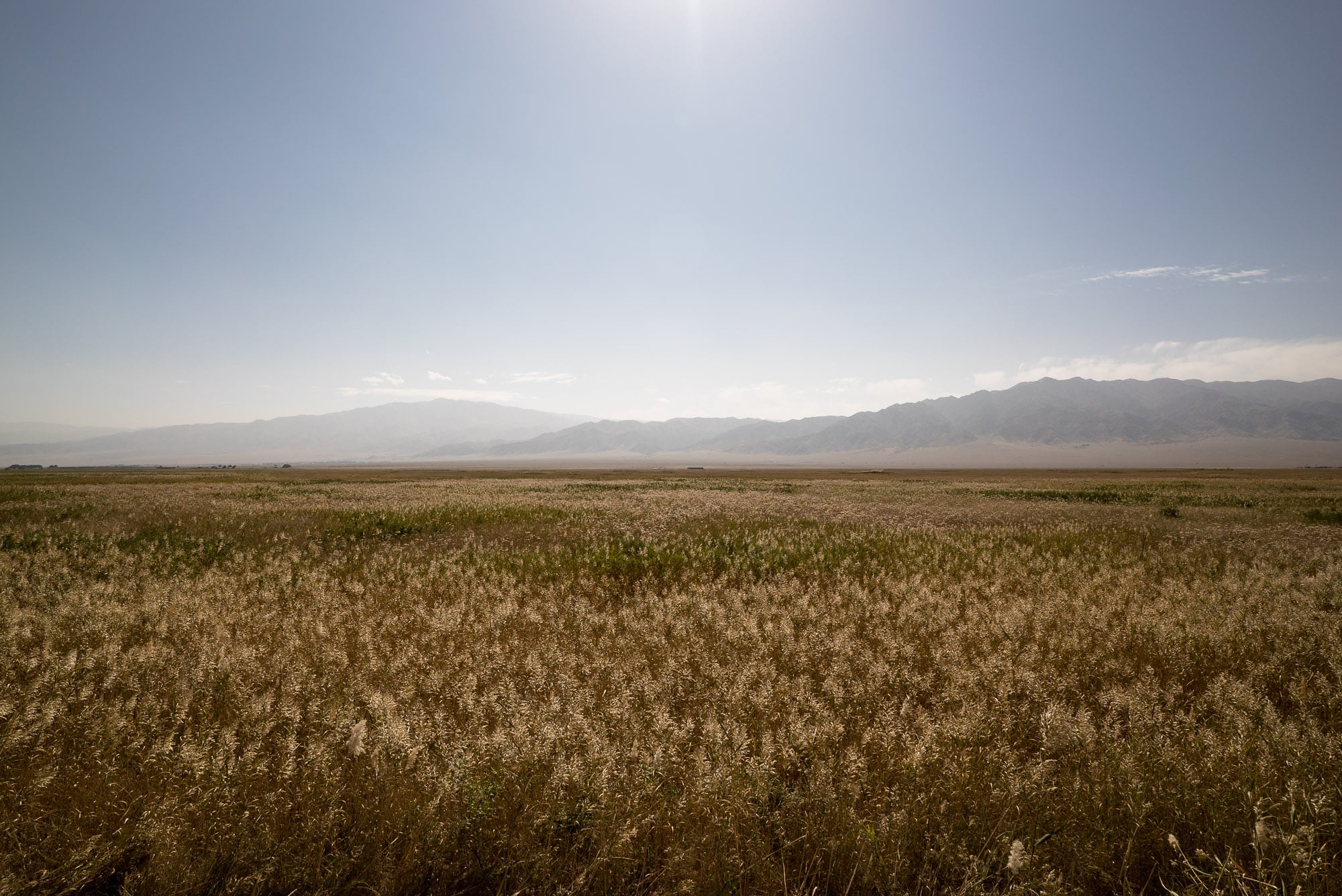 And the road was completely straight. Really. Not just semi-straight, but absolutely straight. Look at the map above. Or check out this video:

I crashed my drone the other day. Now the gimbal seems to be a bit askew. Not sure what to do about it. Of course I can adjust it using the software. But it never works 100%. Sad story.

But what’s more important – the Caboose seems to be just fine: 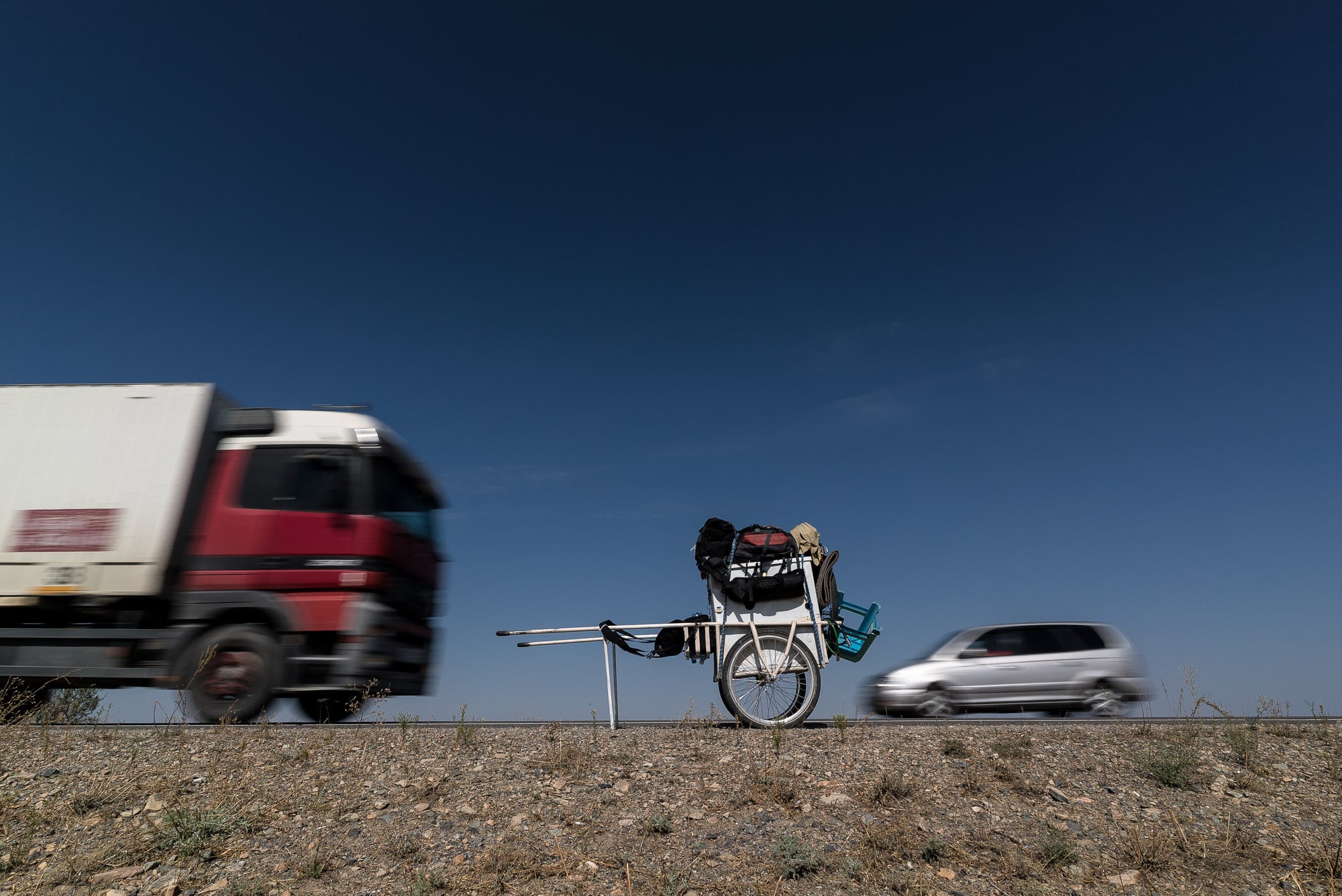 No problems ever since Victor looked her over last month.

So when I found a little Audi plate I decided to attach it to the Caboose: 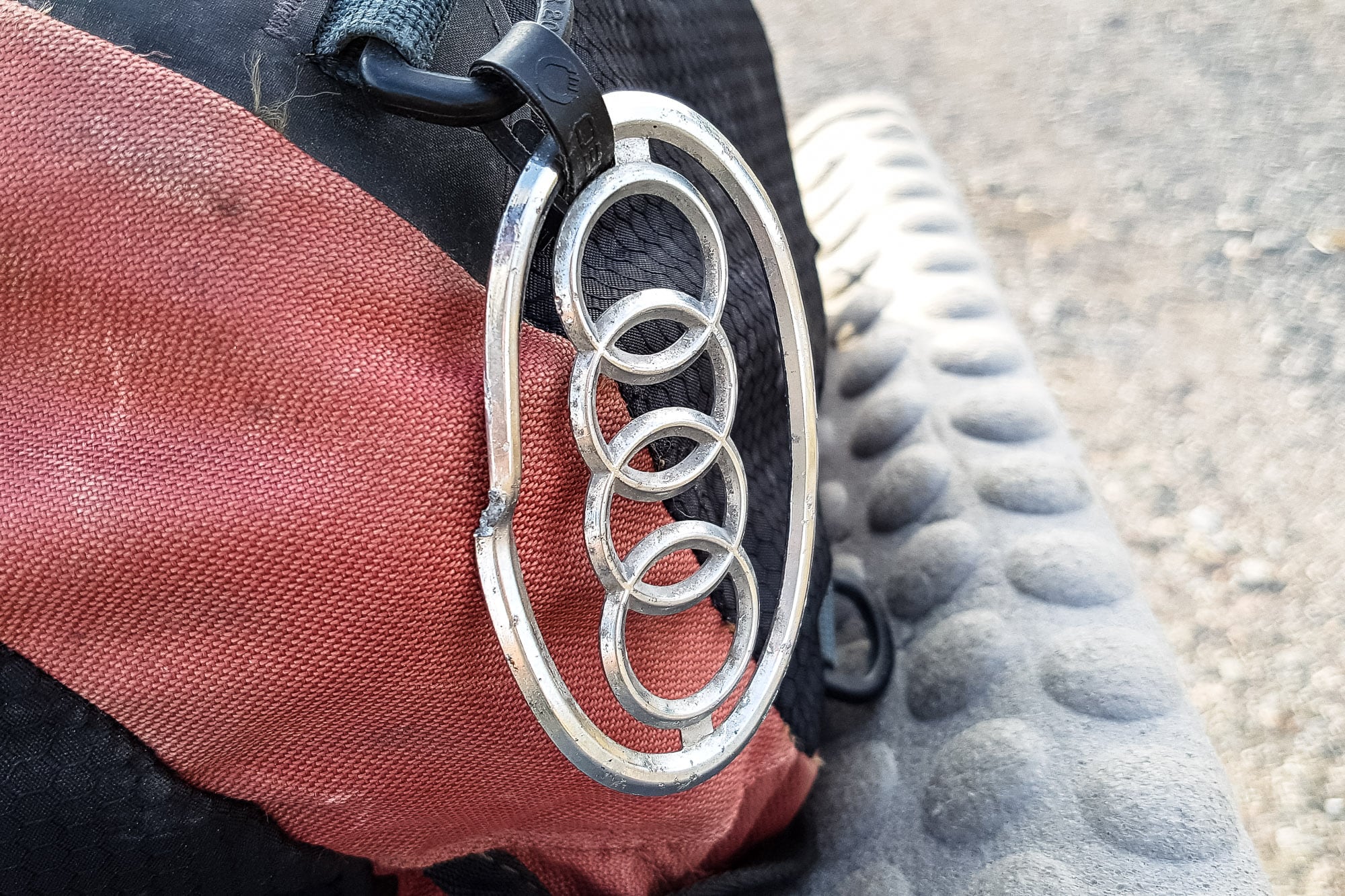 I wanted her to know that she, too, was some sort of luxury vehicle. At least in my eyes she was.

Or maybe I was just bored. Sometimes people ask me: is walking never boring? Yes, of course it can be boring. Very boring. But you know what boredom does to you? It slows down time.

And you know also how time seems to be passing increasingly fast after you’ve become an adult?

Well, boredom can partly reverse this effect. Time will pass slowly. Your day will become looooong. Like when you were eleven years old and you were hanging out on the couch upside down, just because you were so bored.

So here I am walking around looking at skinny horses with bound legs: 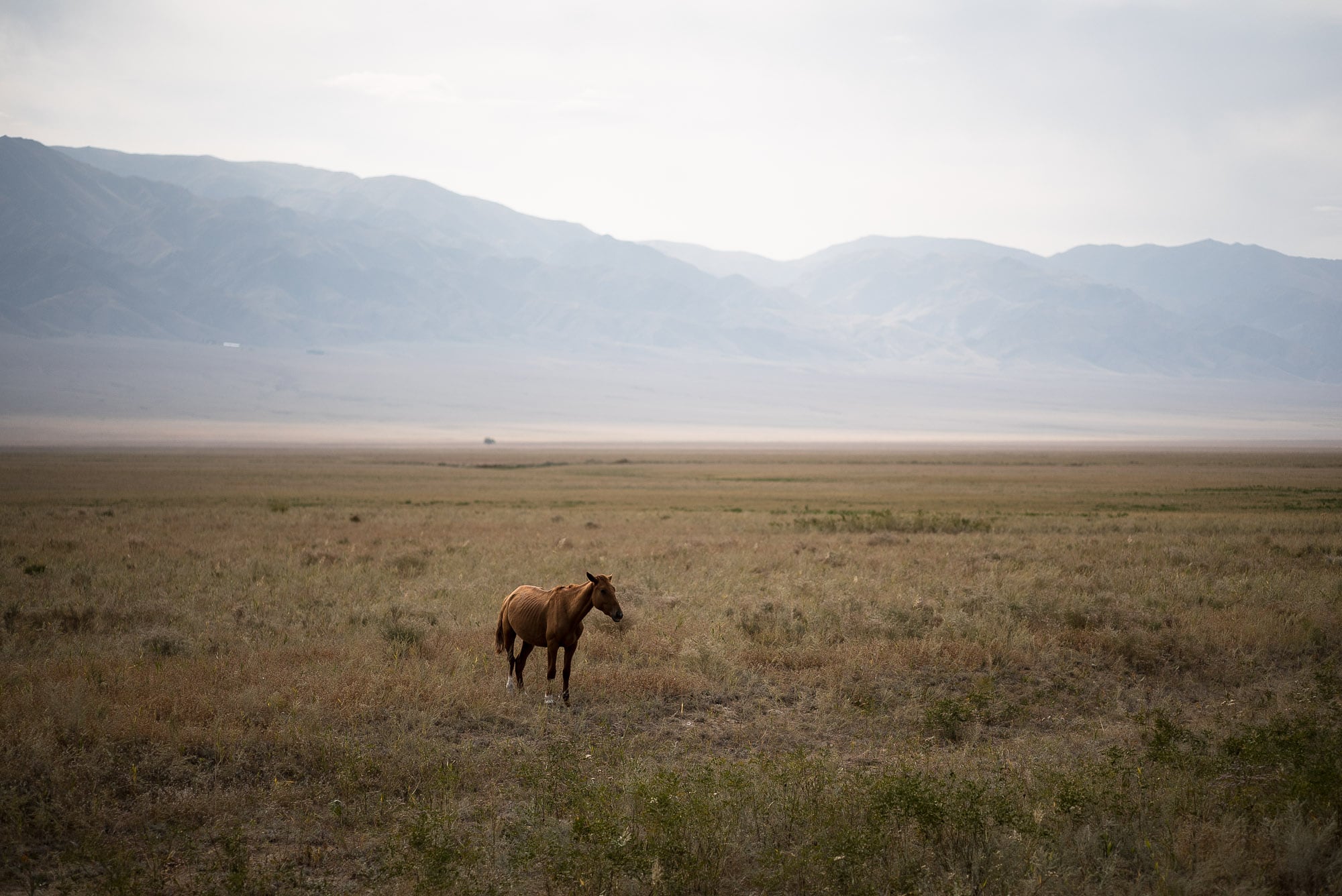 And I’m thinking: thank God I am not this horse.

Then I see cows chilling like pros on a field in front of a tree, with a mountain range in the distance: 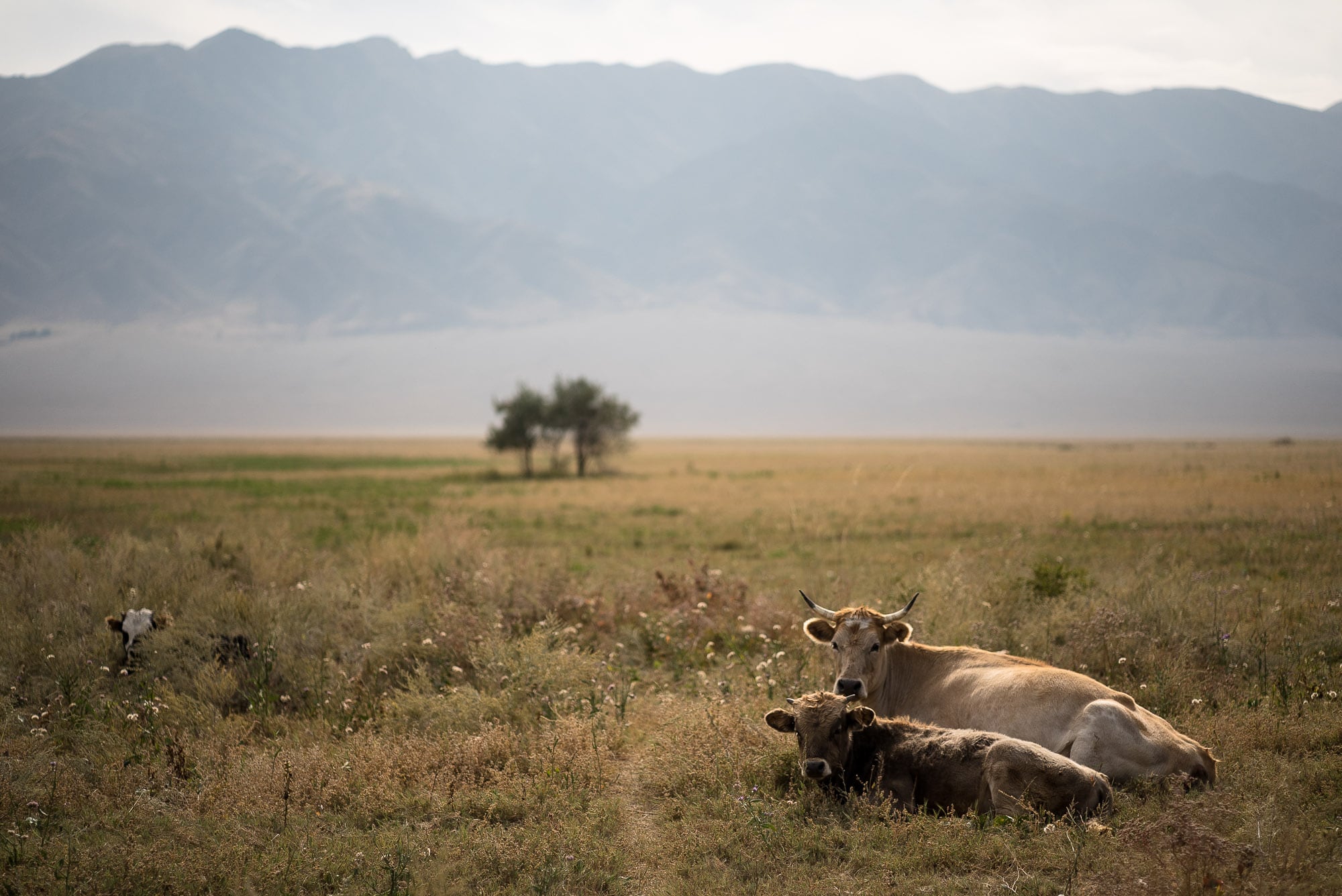 And this time I’m thinking: I would like to be that cow. The little one. That would be nice. 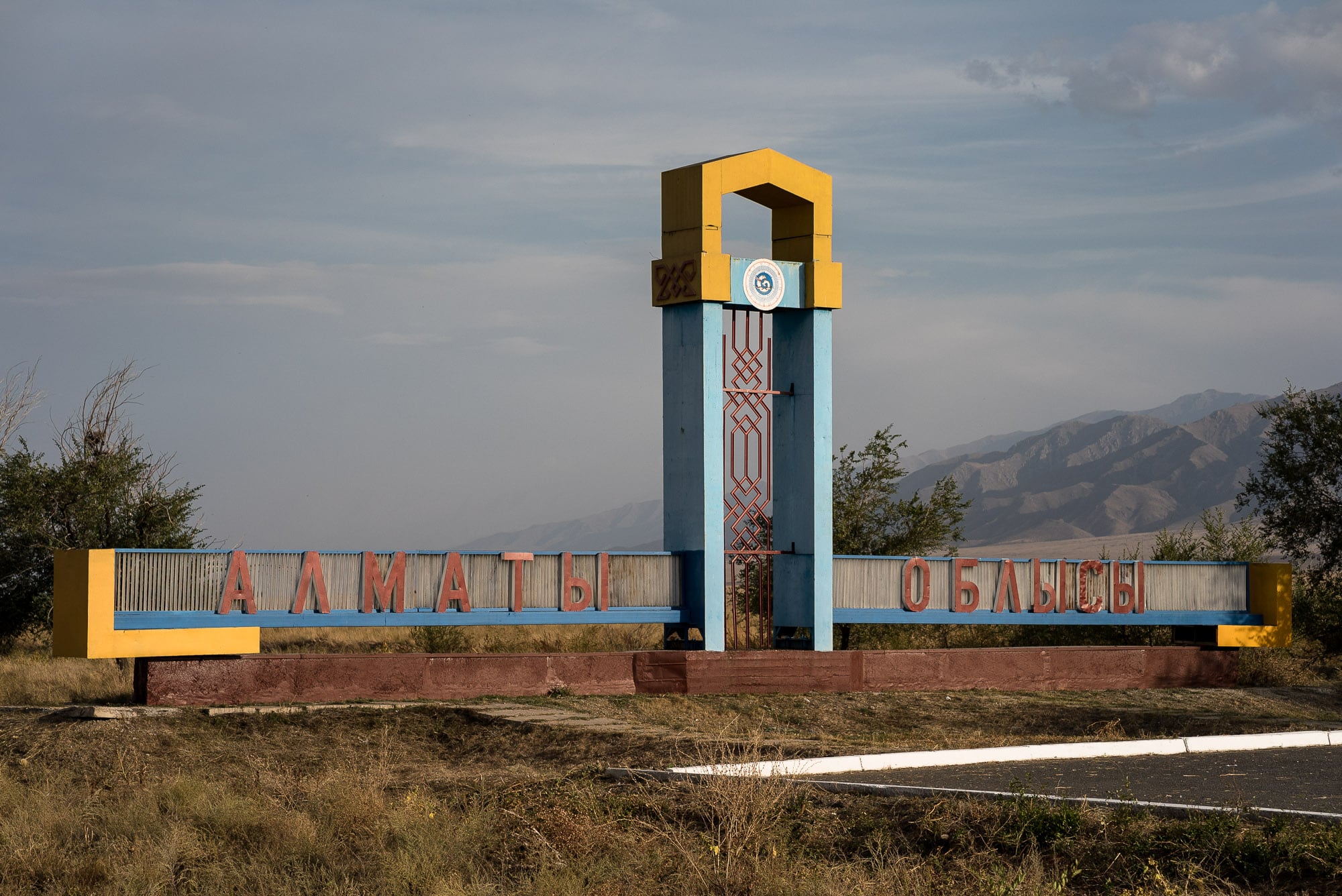 An oblast is something like a state or a province, an administrative region. I entered Zhambyl Oblast today: 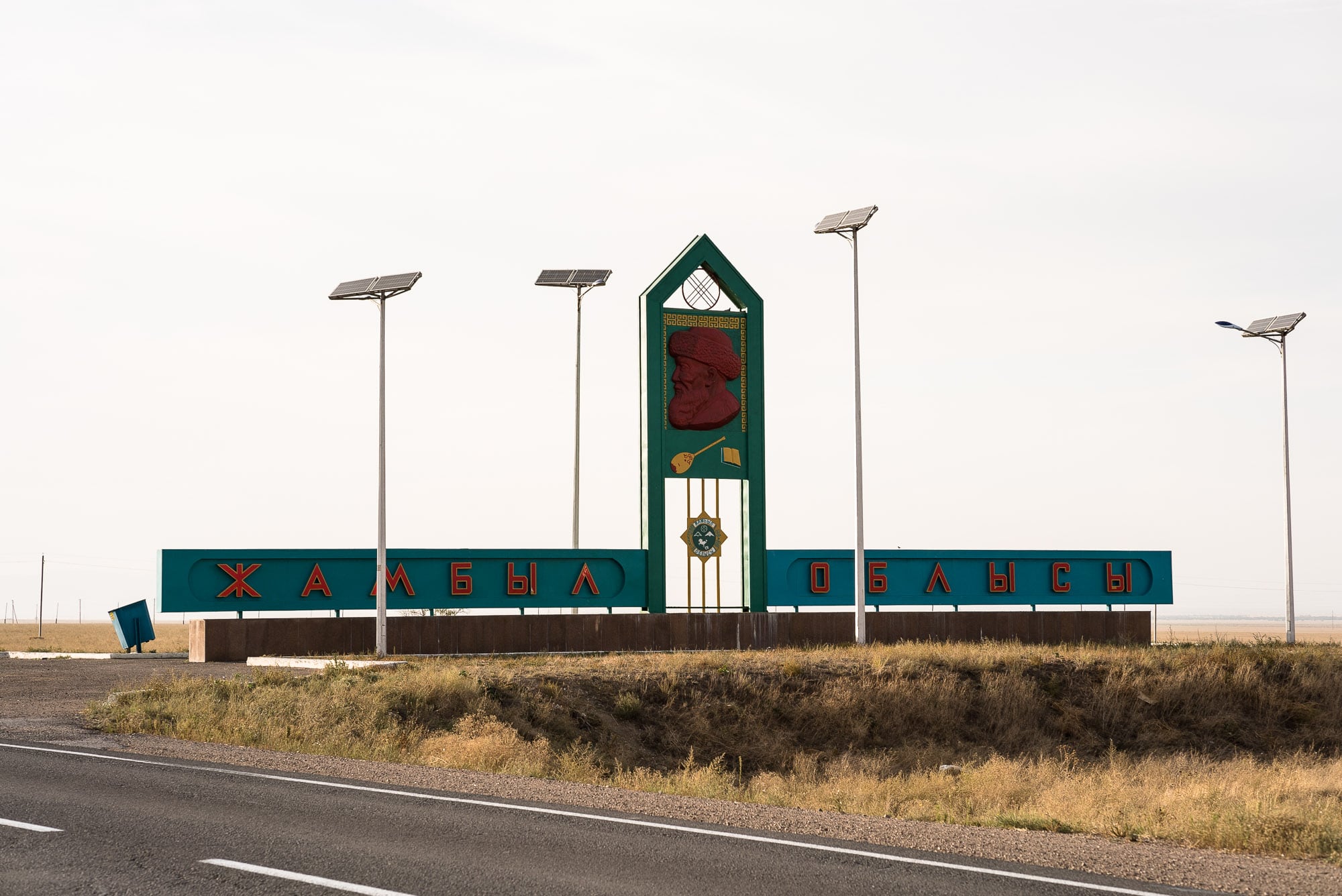 And right there, at the place where the two territories met, I found another resting area, a restaurant called Ak-Bulak: 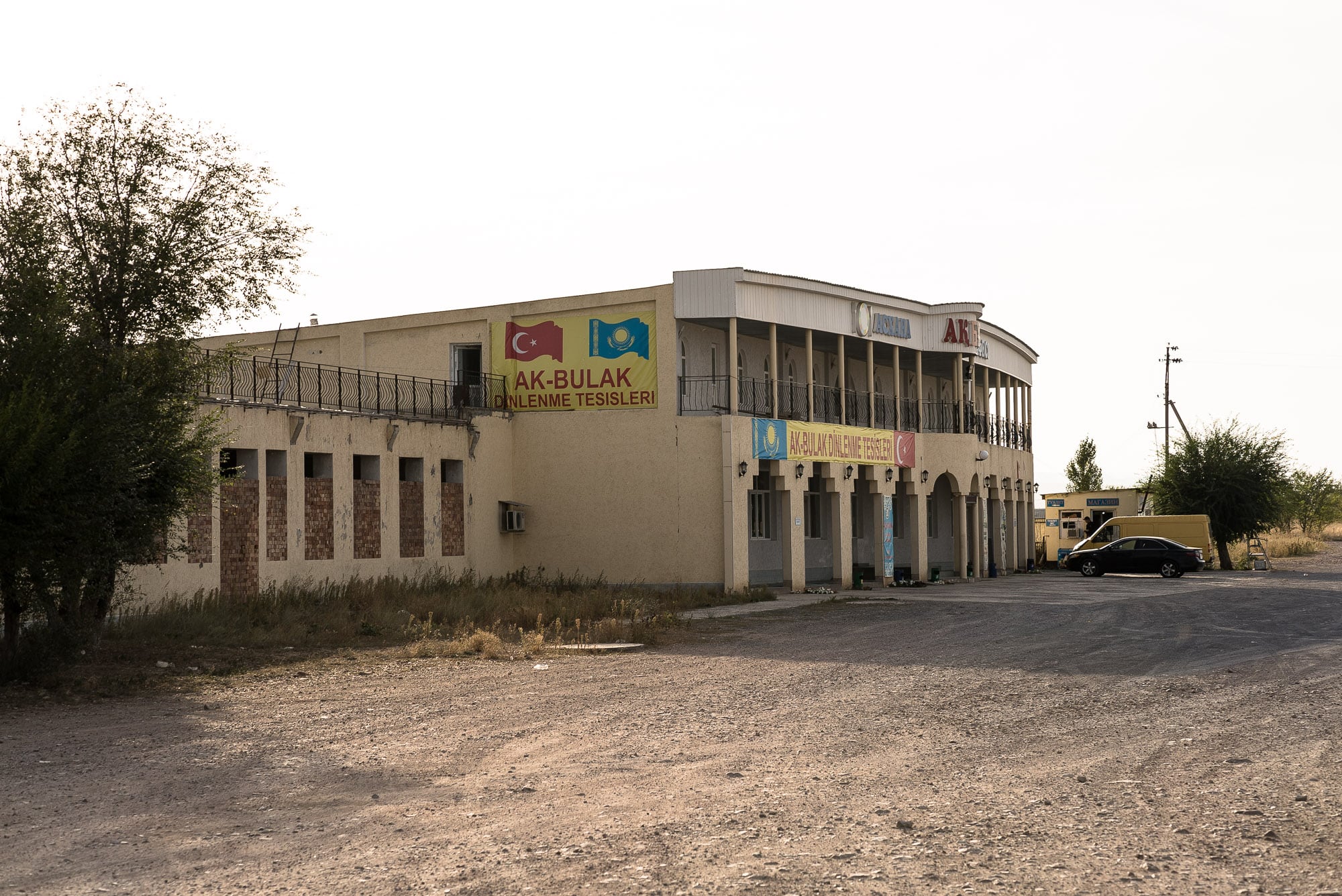 The owner, Nazif from Istanbul told me he was sorry: he had no rooms for rent. I decided to get some food for the way – a loaf of bread, two eggs, a chocolate bar, some water. Istanbul! I thought. This was the first time on my way that I had met a person from there, from the heart of the ancient Ottoman Empire.

I must have looked quite pathetic, because Nazif took a second look at me and said I could just sleep in the restaurant if I wanted: 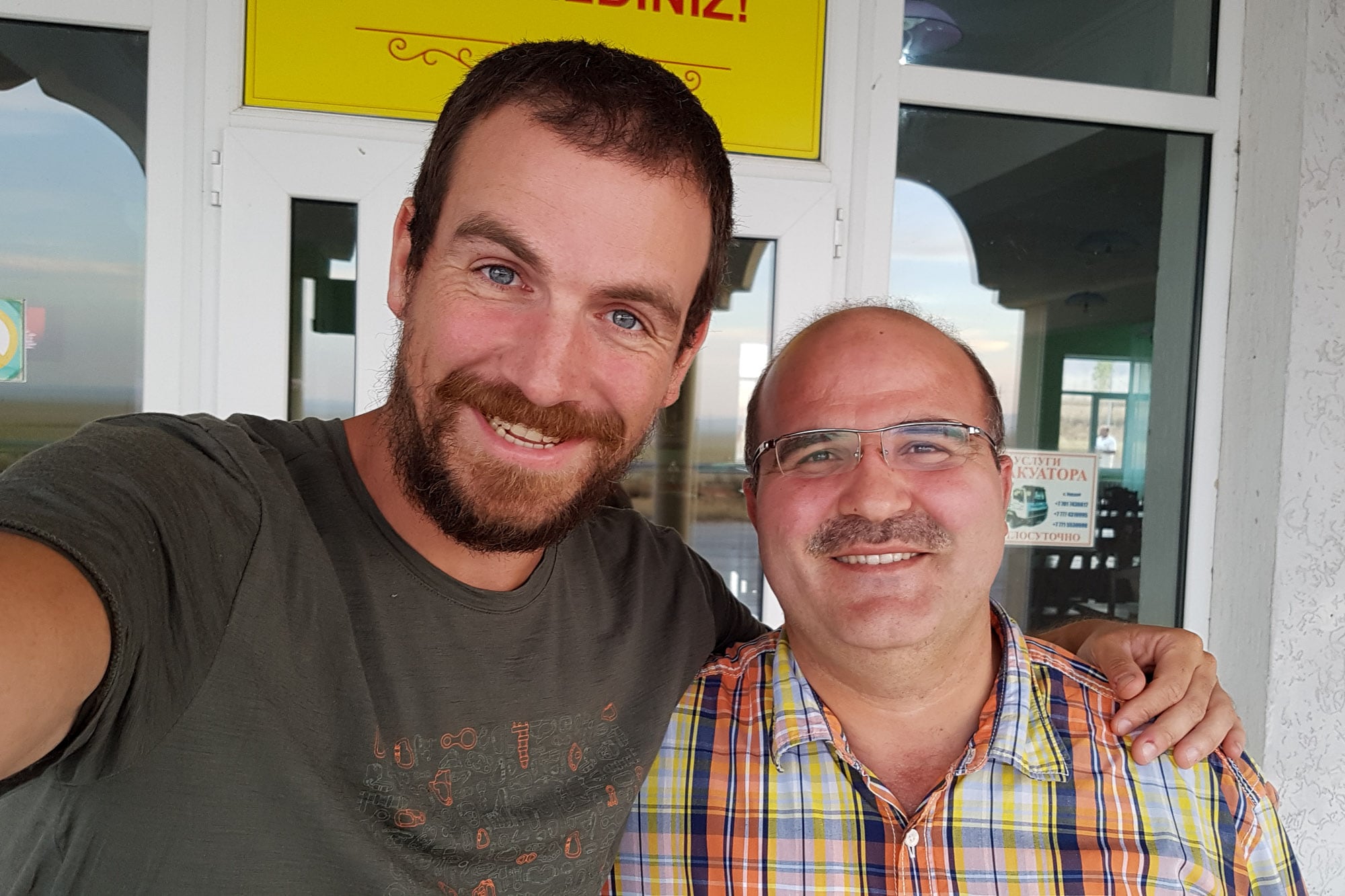 He went home before nightfall, so I was left alone with his staff at the restaurant. They were all very nice. At some point this tray of food appeared in front of me: 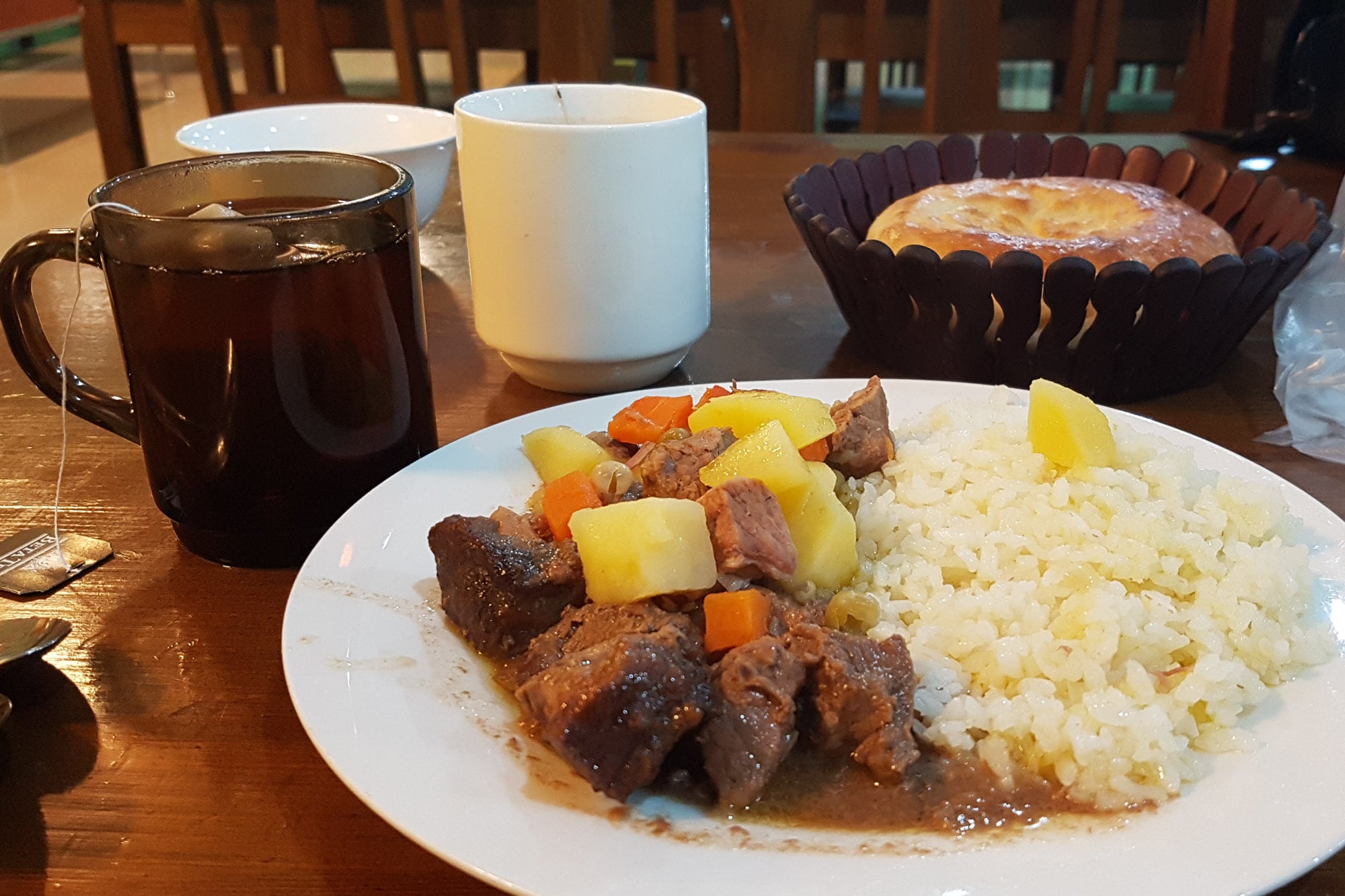 “On the house”, I was told with the hint of a smile.

I was very happy:

So I washed my feet, like I always do:

Then I lay down on one of the long benches next to the tables: 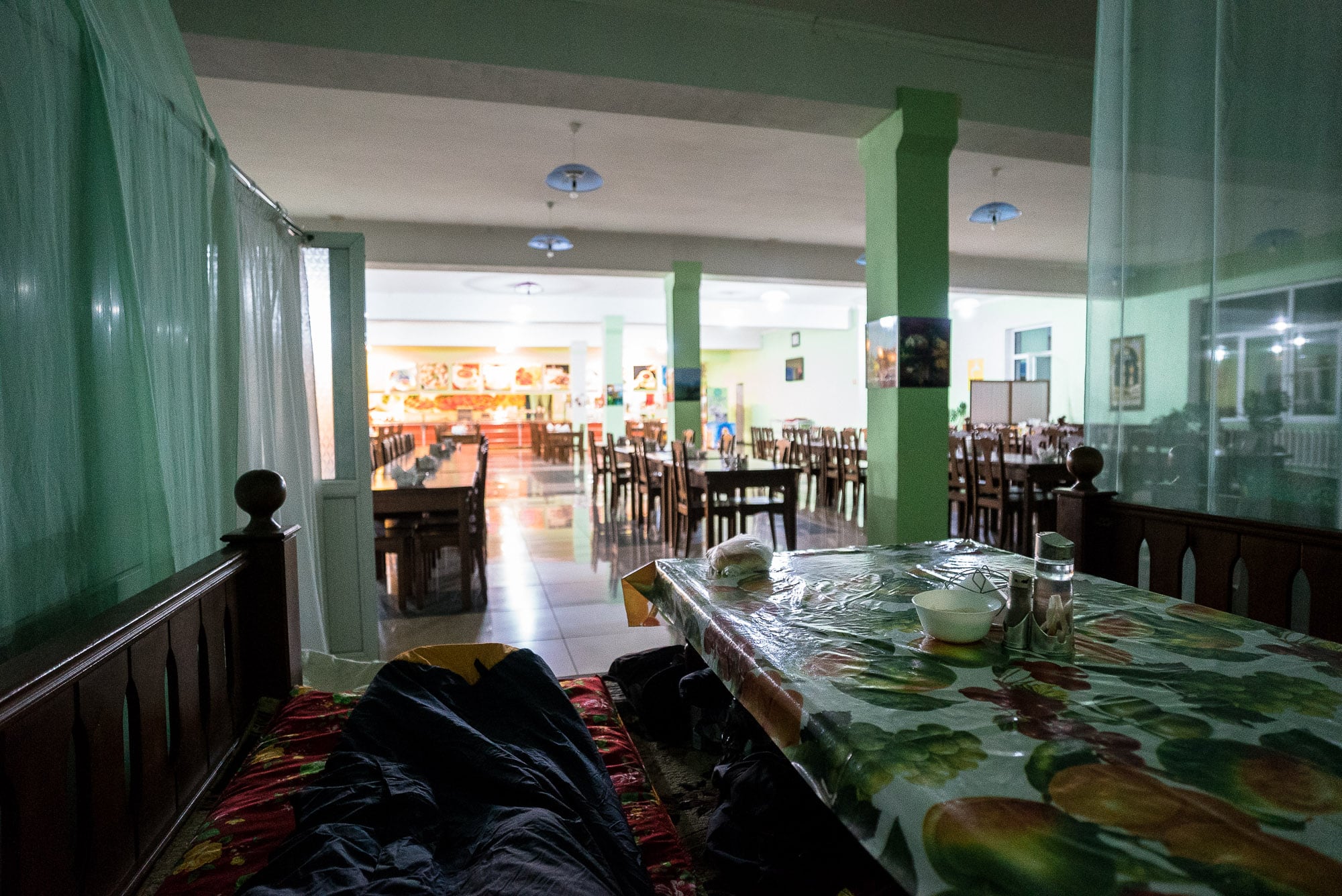 But it wasn’t going to stay that way.