Okay, so this entry is actually not only about today, but also about yesterday.

For once I had arrived at Avrazia, I decided to hitch a ride to the border right away. So I went to the other side of the road and stood there for a while: 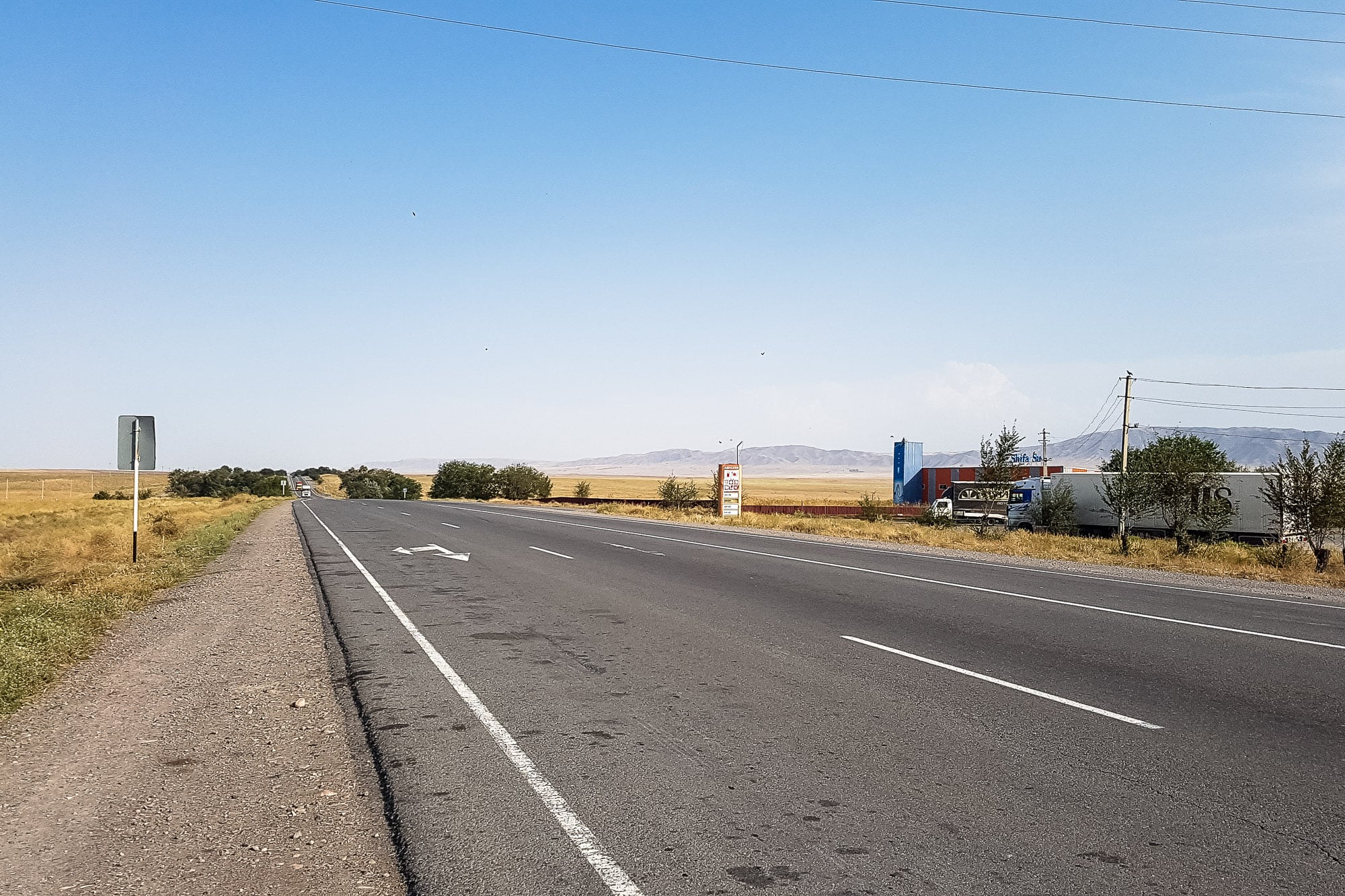 Hitchhiking turned out to be harder than I had thought:

I eventually caught a ride with a lady, her son and her mother. The lady was a soldier, and she was stationed at the border. She drove a Japanese car where the steering wheel was on the right: 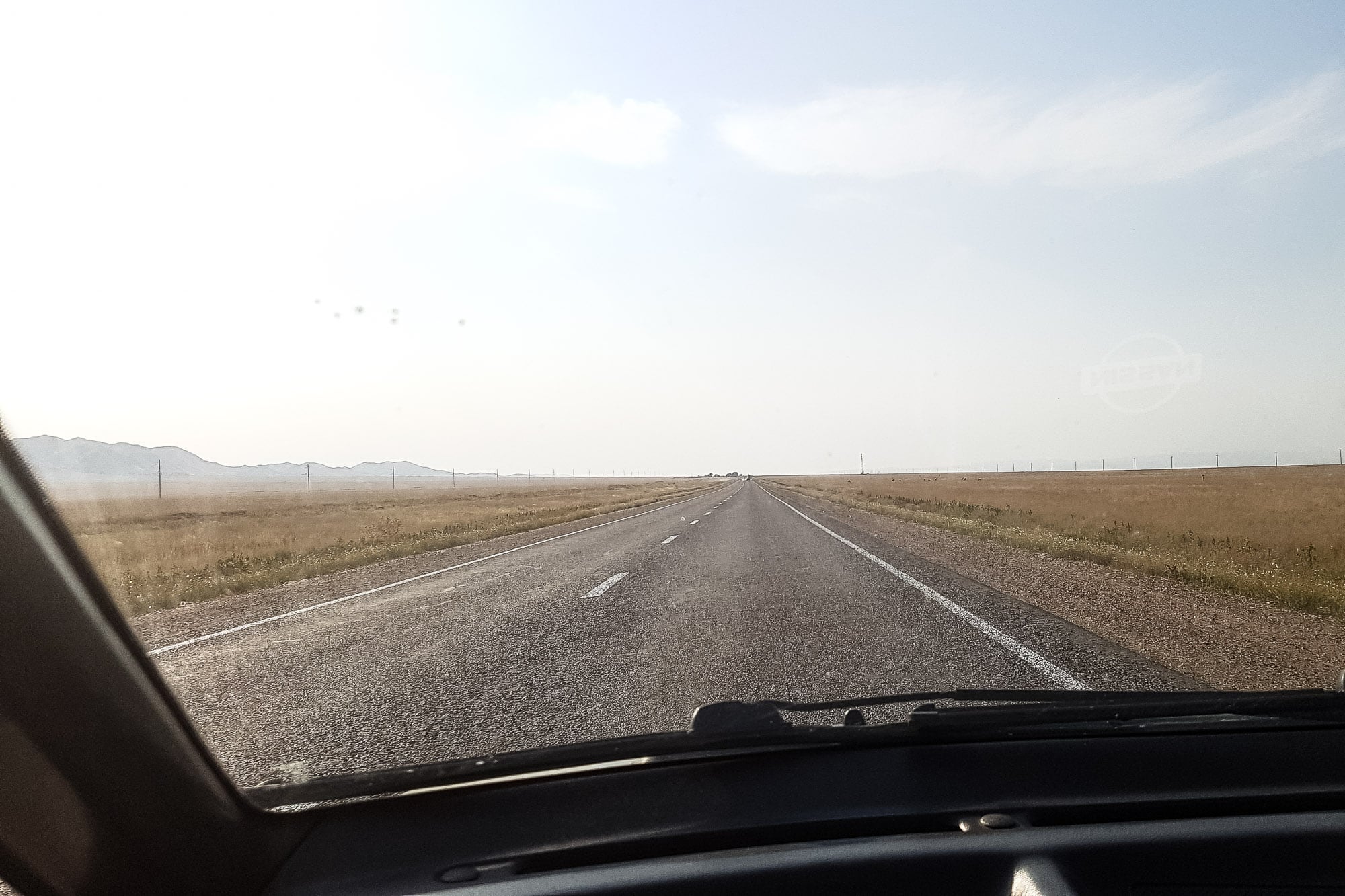 At first I was petrified because of her driving habits (I called her “Schumacher”, which only made her giggle and floor the gas pedal even more), but then I realized that it was good for me to see the perspective of an insane motorist on this road:

…if only to understand that I better get my ass (and that of the Caboose) off the asphalt wherever I could.

It took us a little more than an hour to the border: 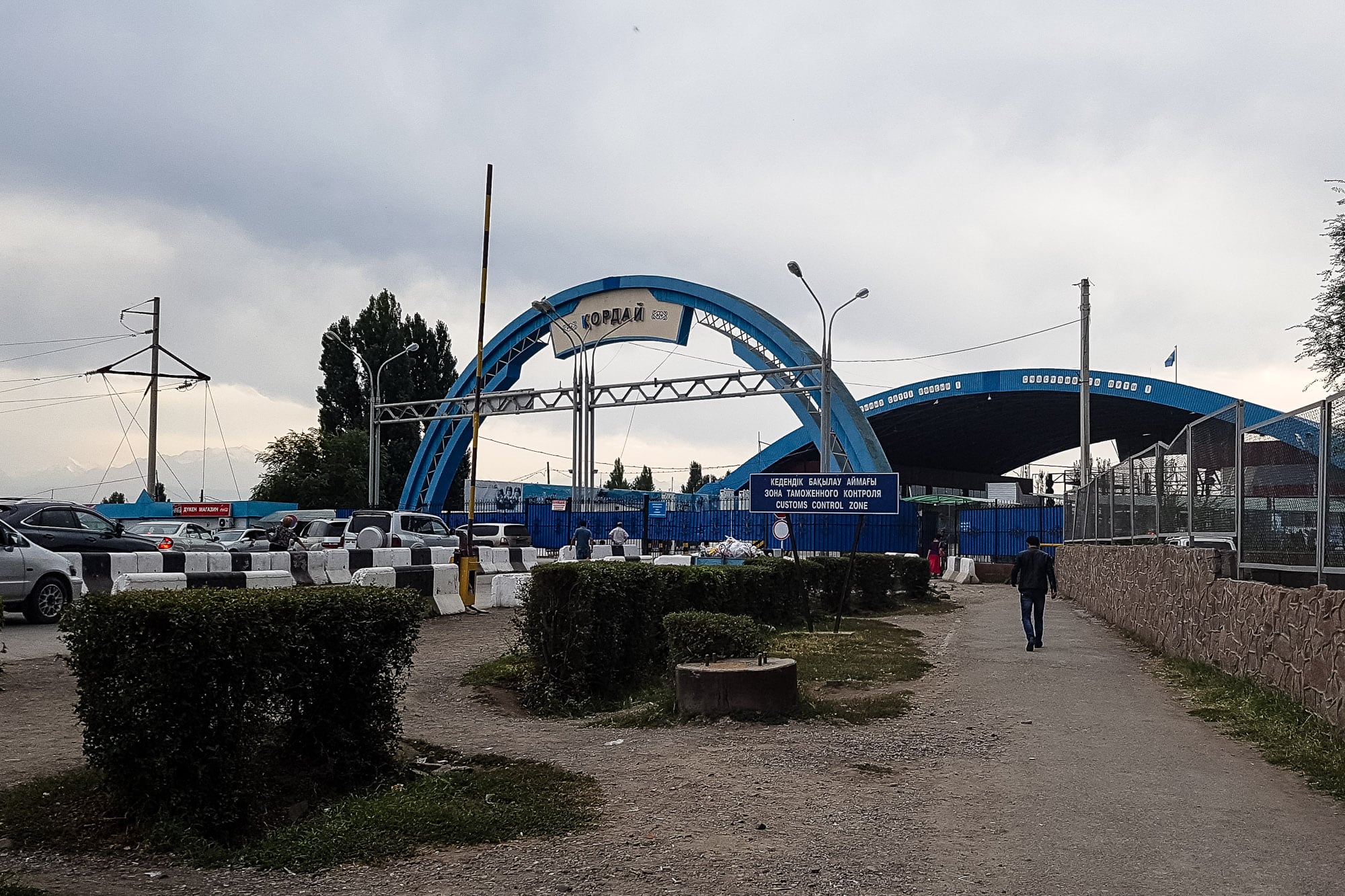 I suspected this to be easy: I would waltz in, stand in line, hand over my passport, smile, go out from Kazakhstan and come back into Kazakhstan on a 15-day visa-free thing. Then I would hitch another ride back to Avrazia.

But when the border guards checked my passport, their smiles froze and they started telling me that something was wrong. I had overstayed my visa, they said. It was expired, they said. I was an illegal alien, they said.

I was waved into a small office where an impatient young man started lecturing me. He was very impatient. My Russian turned out to be insufficient, and this only made him more impatient.

The office was very small and the air was very bad. I looked around and saw pessimistic faces. These were souls that were condemned to sit around here all day and shout at other people about their documents. I shuddered: I had entered the first circle of bureaucratic hell.

After a while I understood that I would have to go back to Almaty as soon as possible. Preferably the next day.

So I got into a marshrutka back to Avrazia: 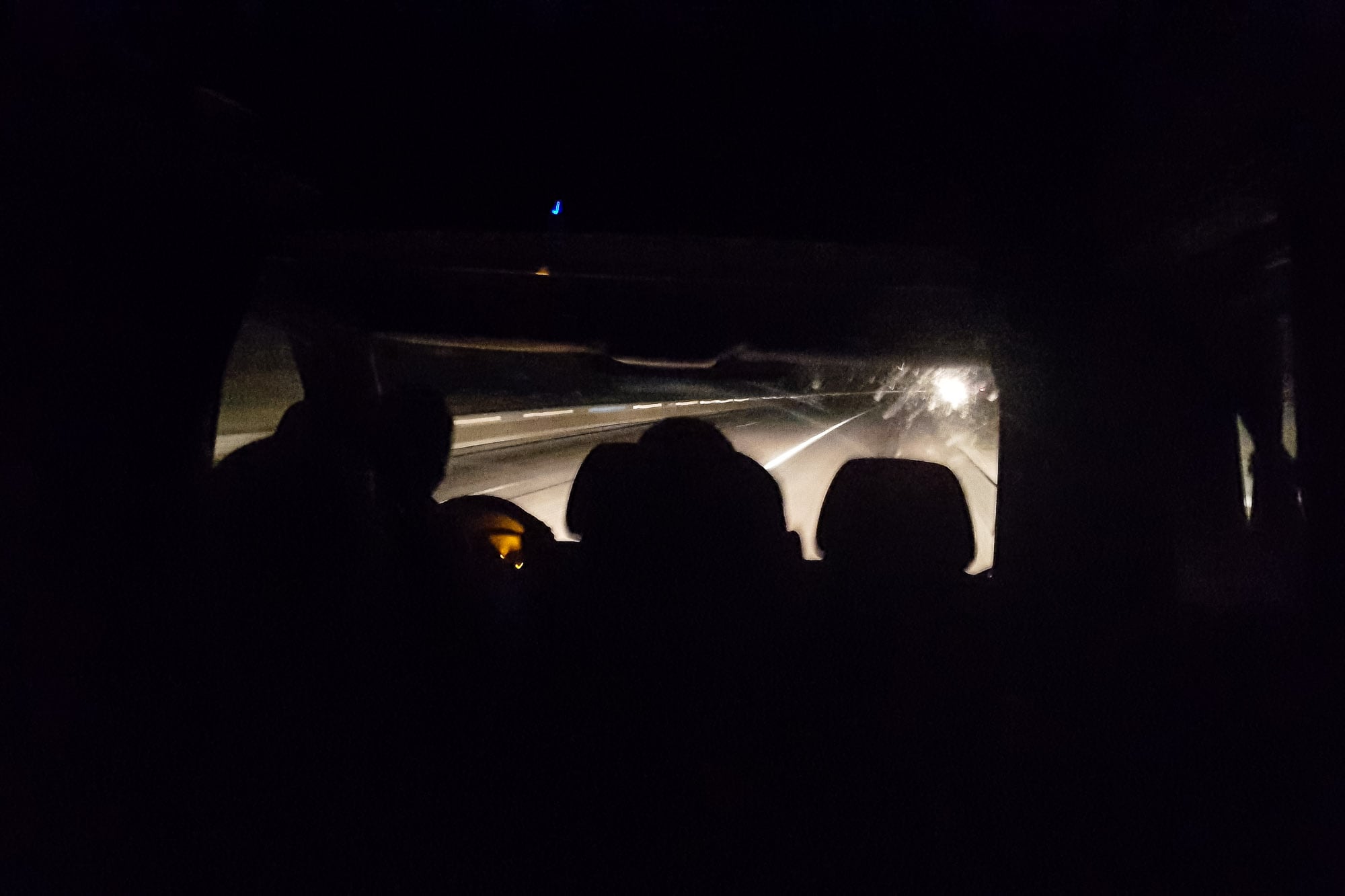 The ride could have been a happy one, since the driver apparently had a thing for Kazakh party music:

But I wasn’t able to appreciate it. Not tonight.

Which was last night.

Which is why I chose to combine the above account with the entry from today. Because to me it had nothing to do with yesterday’s walking and all the more with today’s descent into bureaucratic hell.

And I was about to swan dive into it.

The first thing I did after I woke up today was something else though: I did laundry: 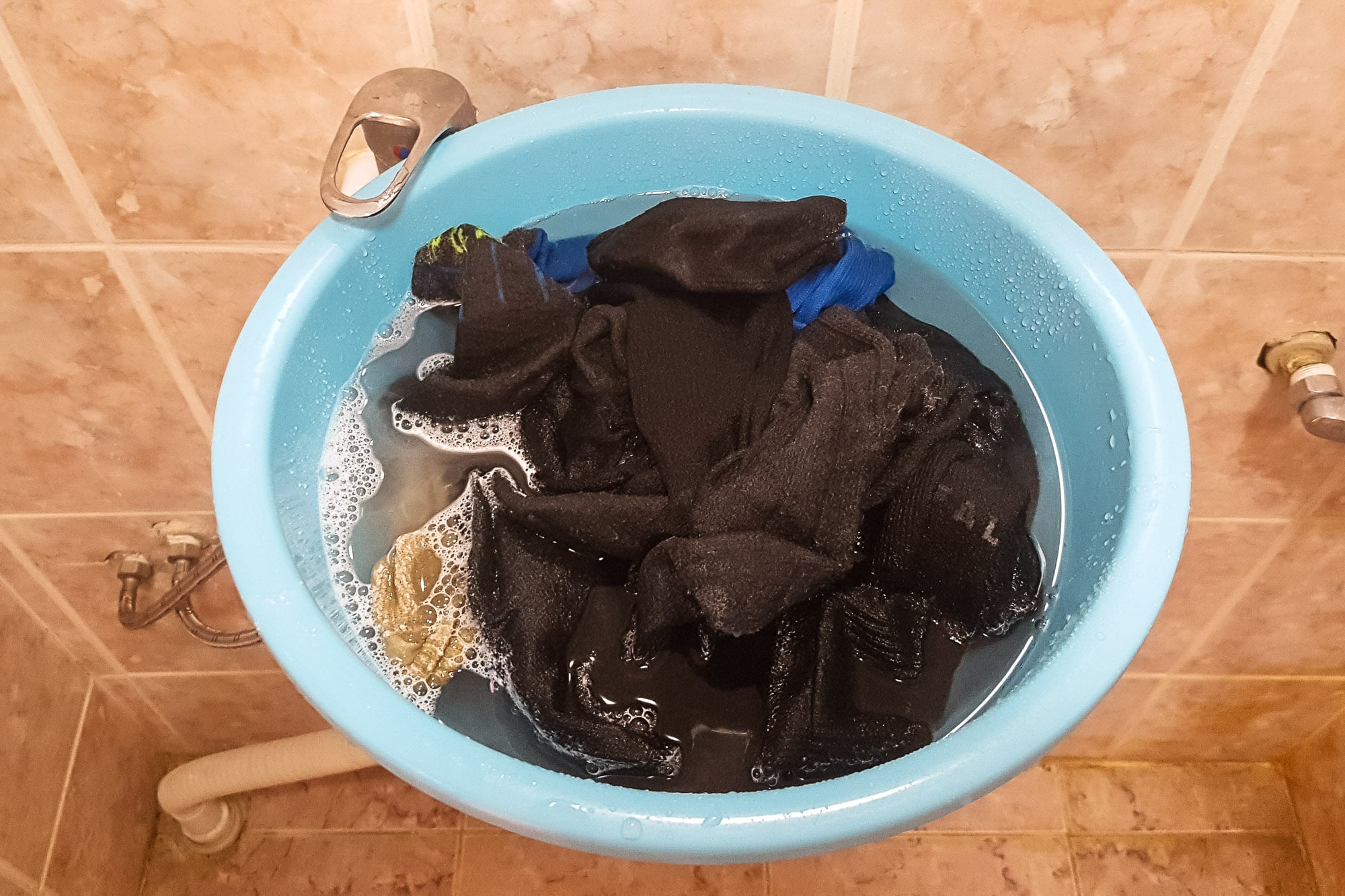 Why did I do this? Well, I needed fresh socks, that was the main reason. But another thing that I liked about doing laundry was the fact that I could control it myself. I would rinse and wring, wring and rinse, and then, when I figured that they were sufficiently clean, I would hang the socks up in my room: 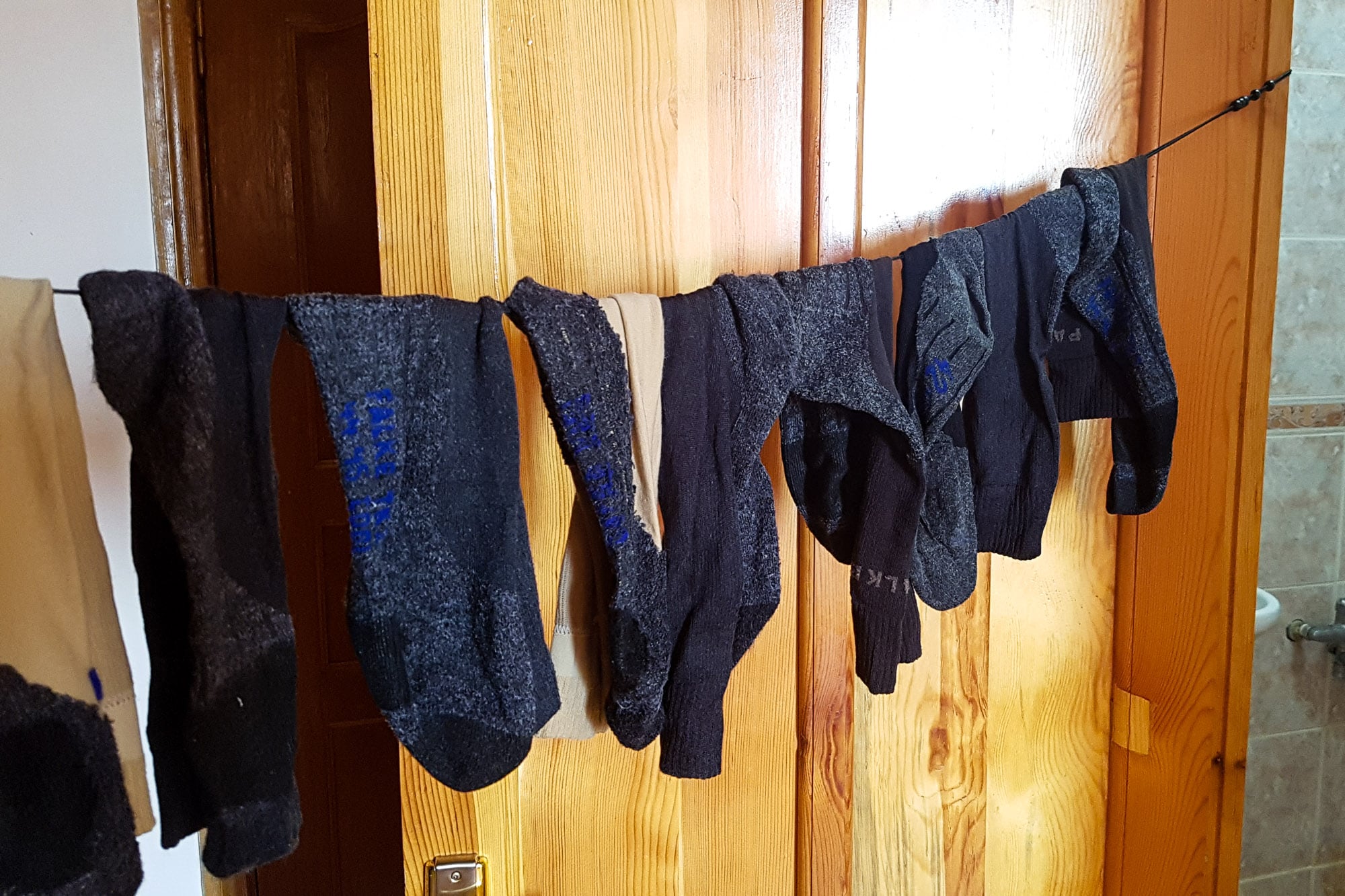 I was in control, and that was good. If only of a few pieces of laundry.

Then I hitched another ride to Almaty: 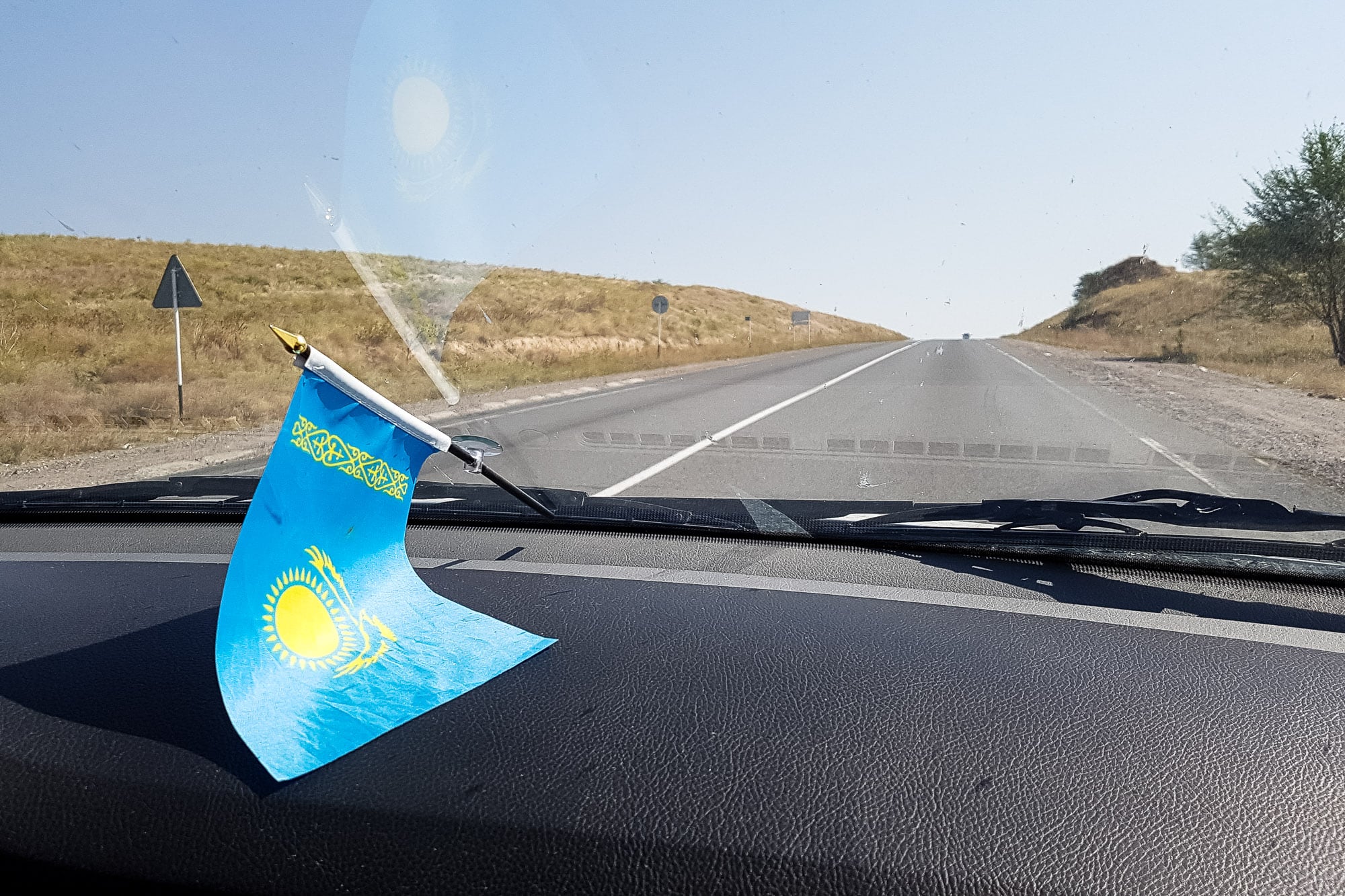 I had been given an address of a certain “migration office” there. When I went to that office, I was not alone. Luckily a friend had agreed to be my Virgil. So in the second circle we were, which was apparently a place where souls were condemned to stand in line forever, but not just in one line but in many lines, and in lines that had no clear beginning and no clear end: 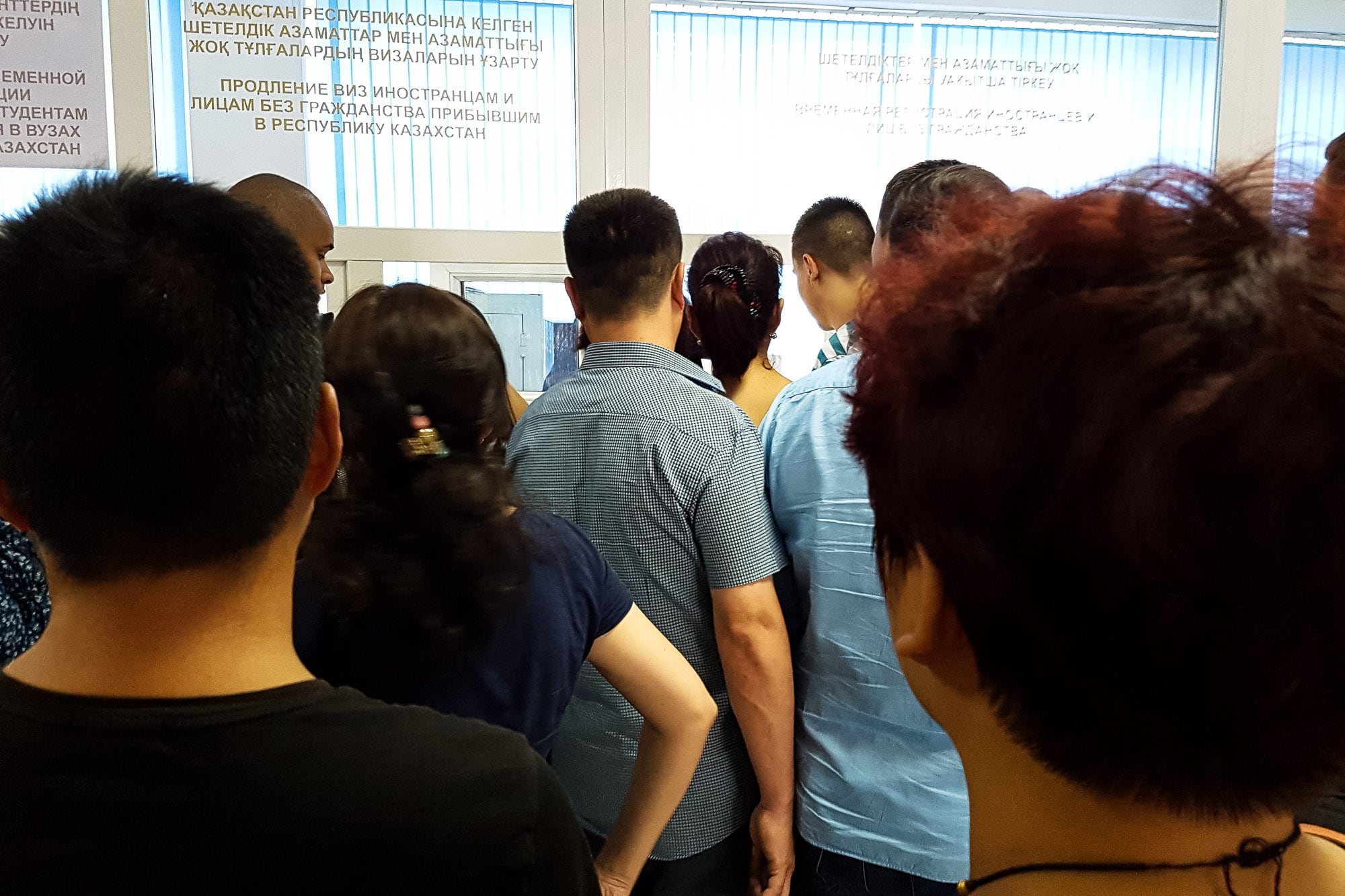 When we finally reached one of the windows the person on the other side looked very serious.

“Come back tomorrow!” he told us after looking at my passport, “but don’t come back here, go to another place!”

He told us the name of a place, and we sighed. It was a court.

I left a note in the guestbook: 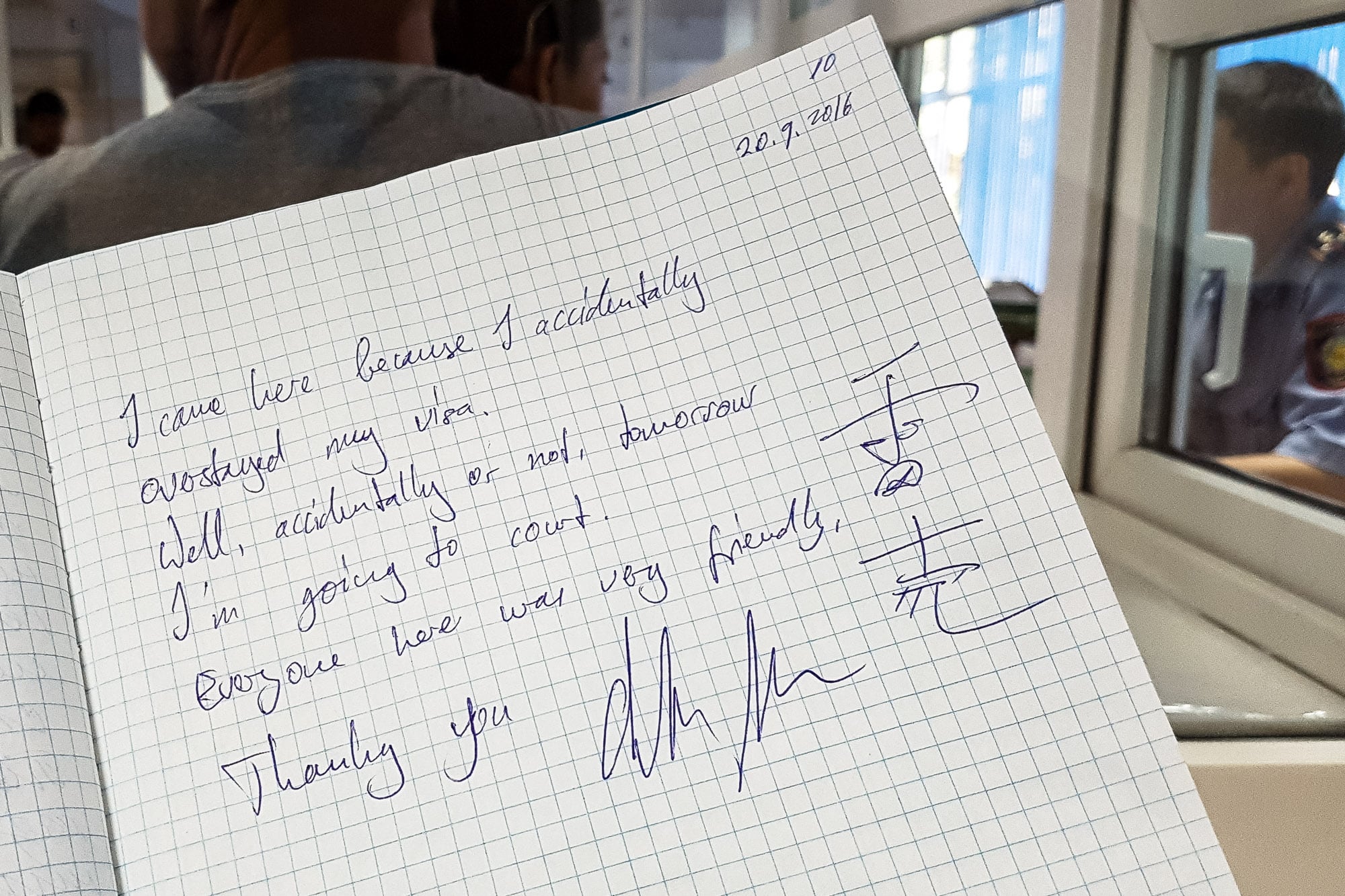 Then I thanked my friend, walked through town, and got a room in a hotel.

It seemed a bit strange: less than 48 hours ago, I had slept between cows on a field, and I had felt scared of wolves, of snakes and of bad men. And now I was here, in the sparkling world of Almaty, and I was scared of the nine circles of bureaucratic hell: 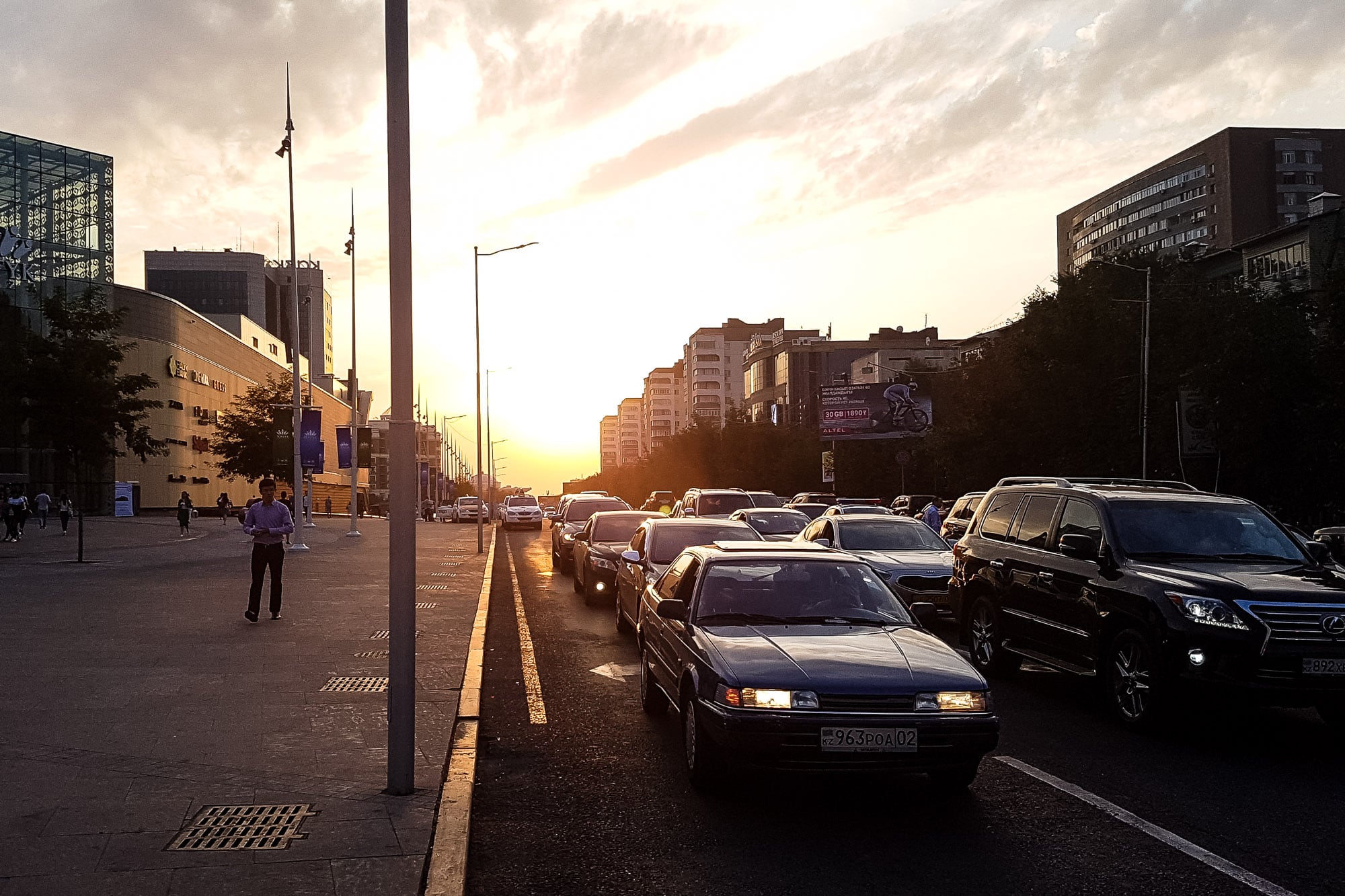 Of which I had only seen two.