I woke up knowing that I would dance today.

But when I looked at my foot I didn’t really feel like doing anything:

With my iPhone gone, I didn’t have any mobile internet anymore. I owned another phone, a Samsung that I used solely as a pocked camera. So I went to a mall and tried to buy a Kazakh sim-card for it, but it didn’t work, apparently because the nice people at Samsung had built in a “region lock” that prevented the phone from accepting any non-European sim-cards. Isn’t that nice? Thank you, Samsung!

Okay, so no internet for me then. I was happy when I walked past a 24/7 pizzeria that had WiFi: 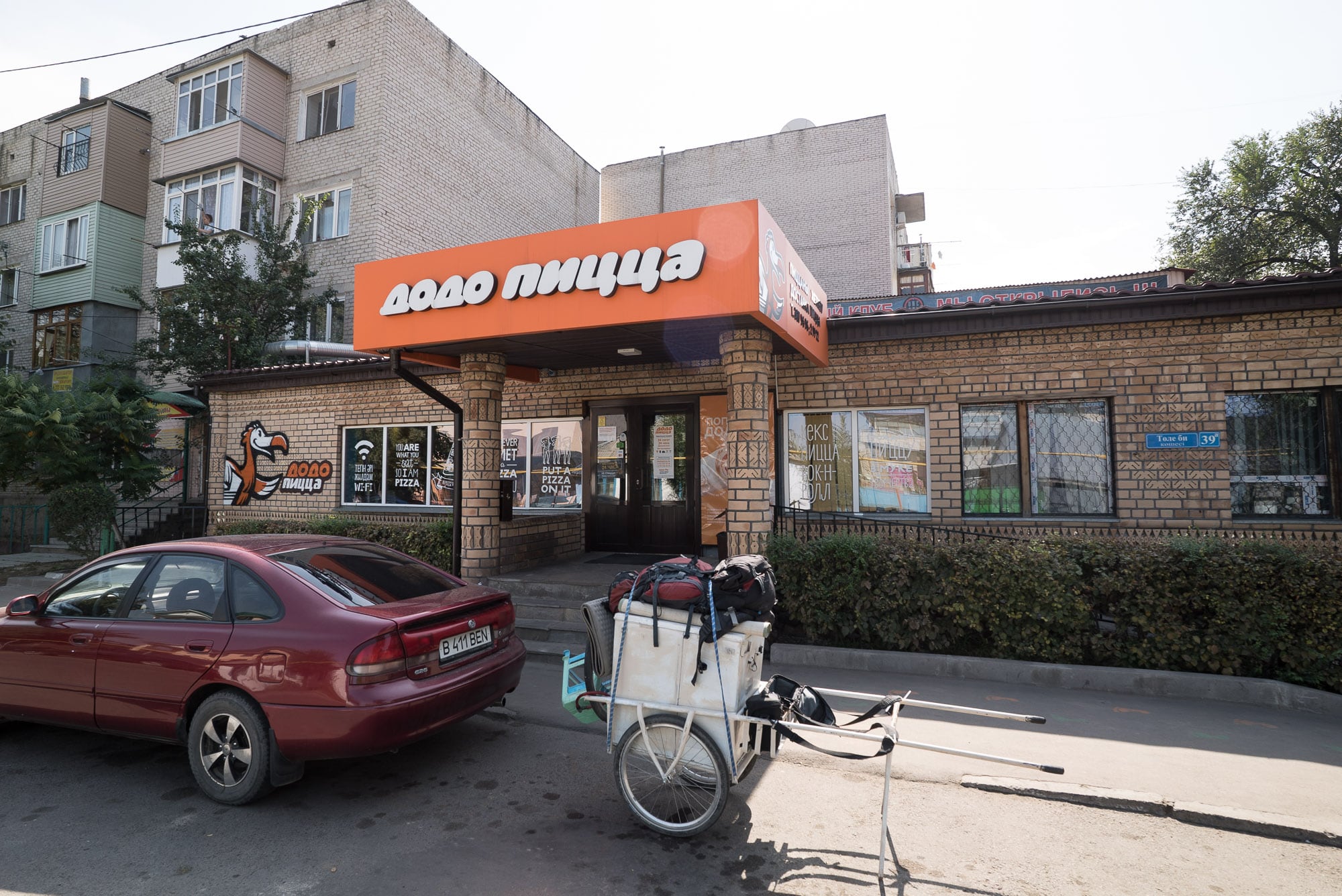 So I hung out there for a while (even had a giant pizza), then I left town and walked.

Sometimes I saw people on the road: 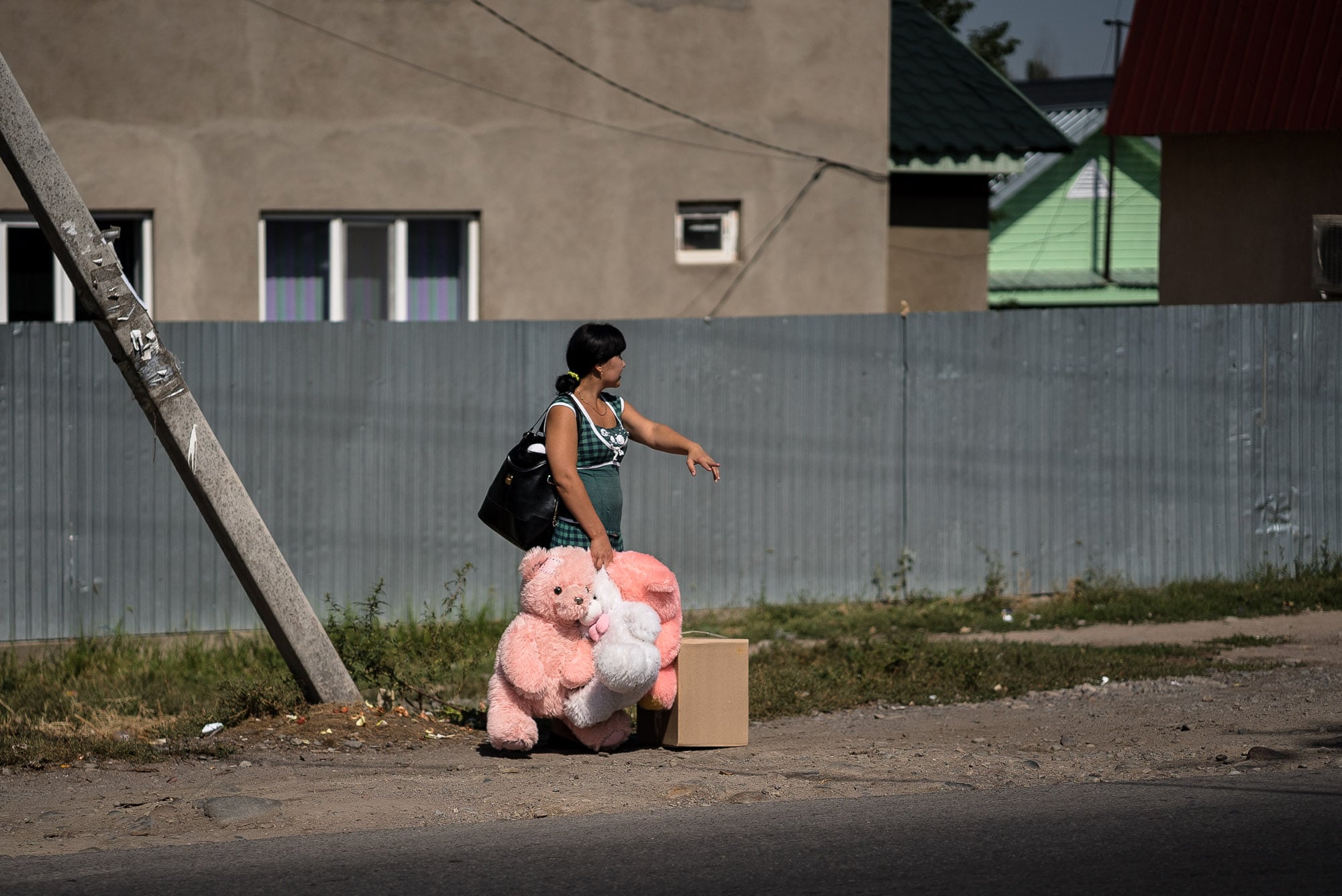 And sometimes I saw things: 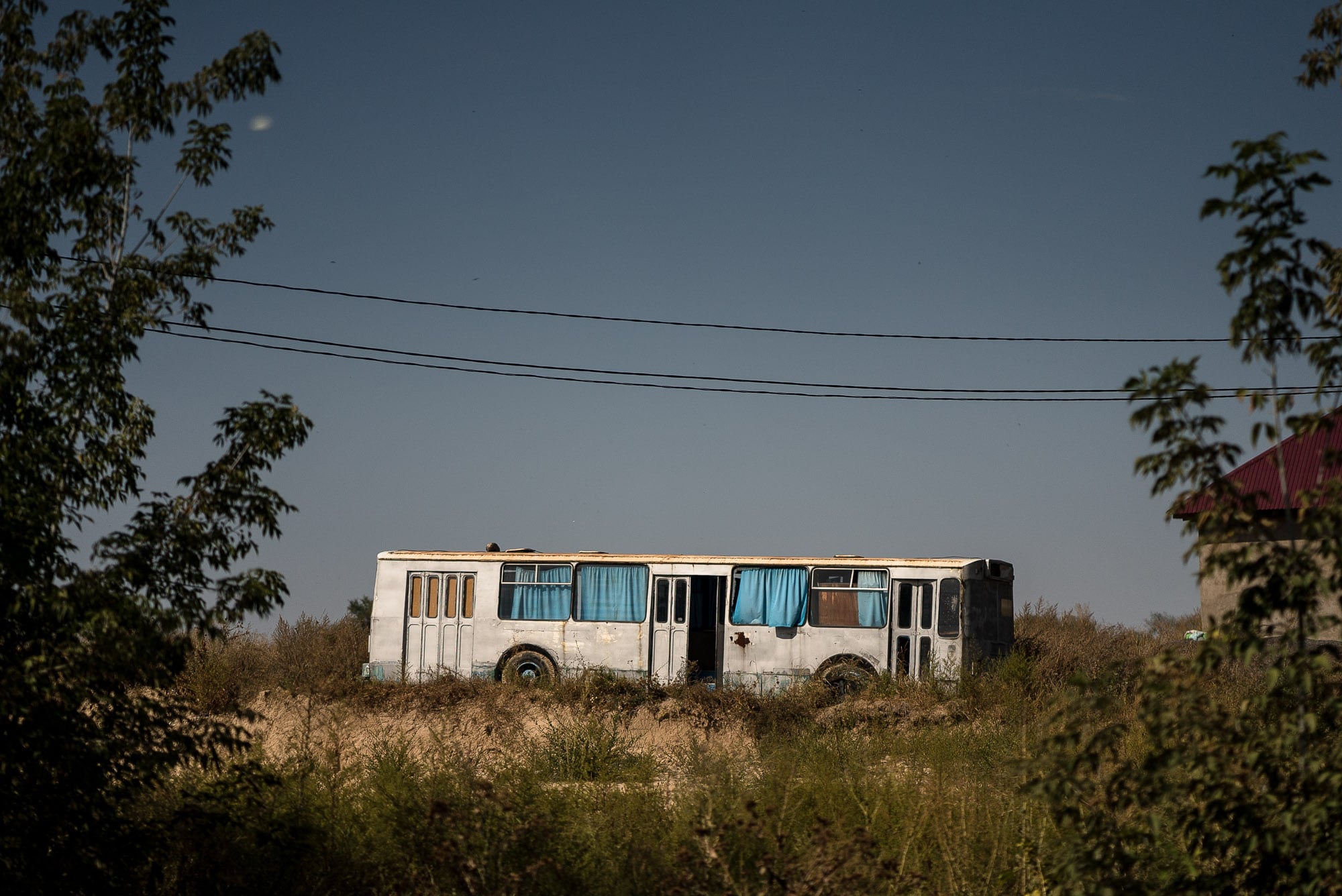 And then, at around three in the afternoon, I arrived at the exact spot that marked 6000 kilometers since Beijing. So I sighed and put down the Caboose. Let’s dance, I said quietly to her and set up the cameras.

Why had I said it quietly though? Well, because I suddenly felt shy about dancing:

I stood around like a fool for a half hour, then I decided to just dance like a fool and get it over with:

But I wouldn’t be alone for long. I was dancing next to a school, and it took only a few minutes for a whole gang of children to appear. They were from the same class, and they apparently thought I was a hilarious. Shall we dance together? I asked them.

Some shrugged, and some nodded. But they all smiled.

I only had one copy of my book with me, and I gave it to them. And because I couldn’t give it to all of them at the same time, I made it out to their class an d gave it to the youngest of them. Then we took a gazillion selfies together: 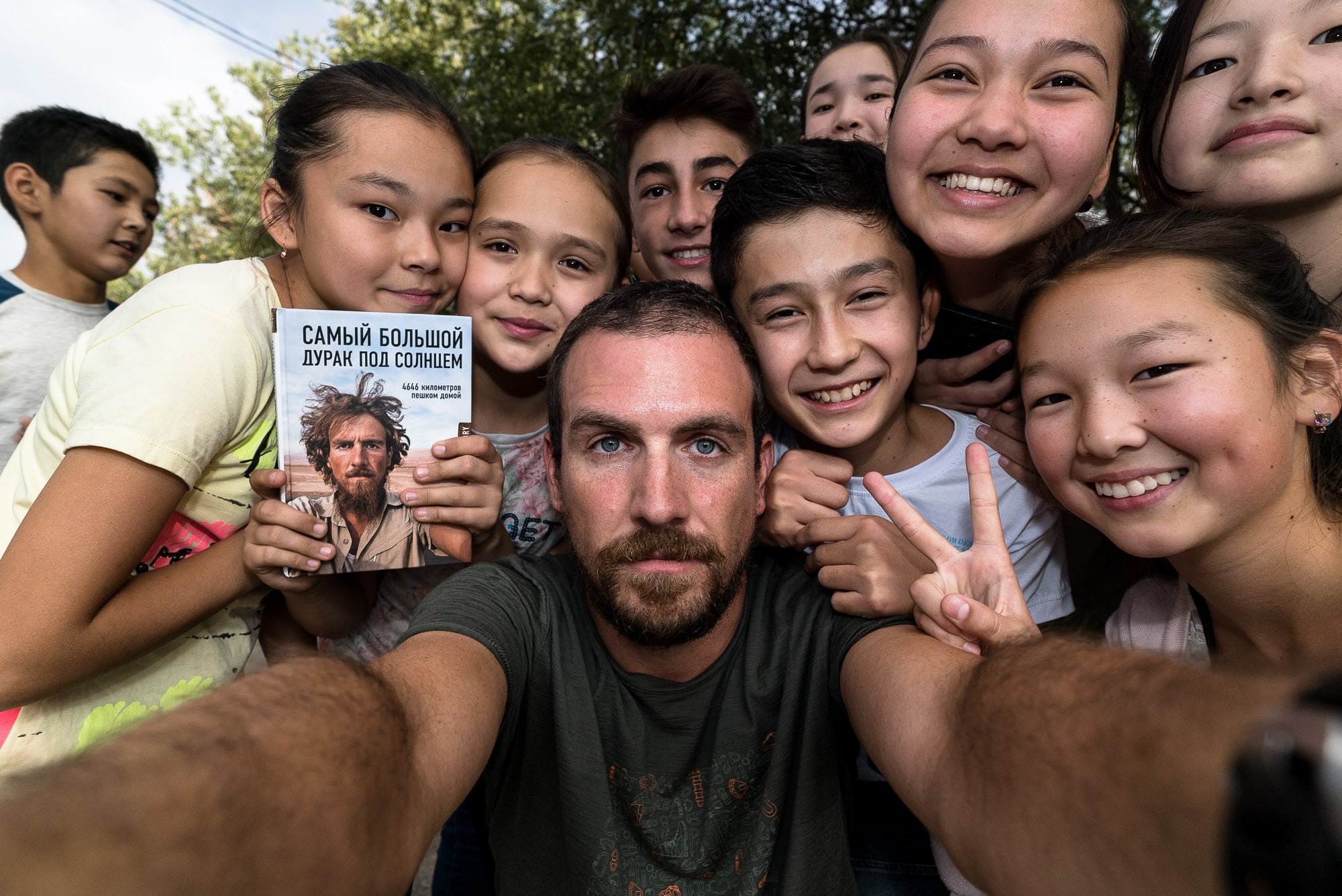 After this whole thing, a Kazakh guy started walking with me. His name was Yegbakir: 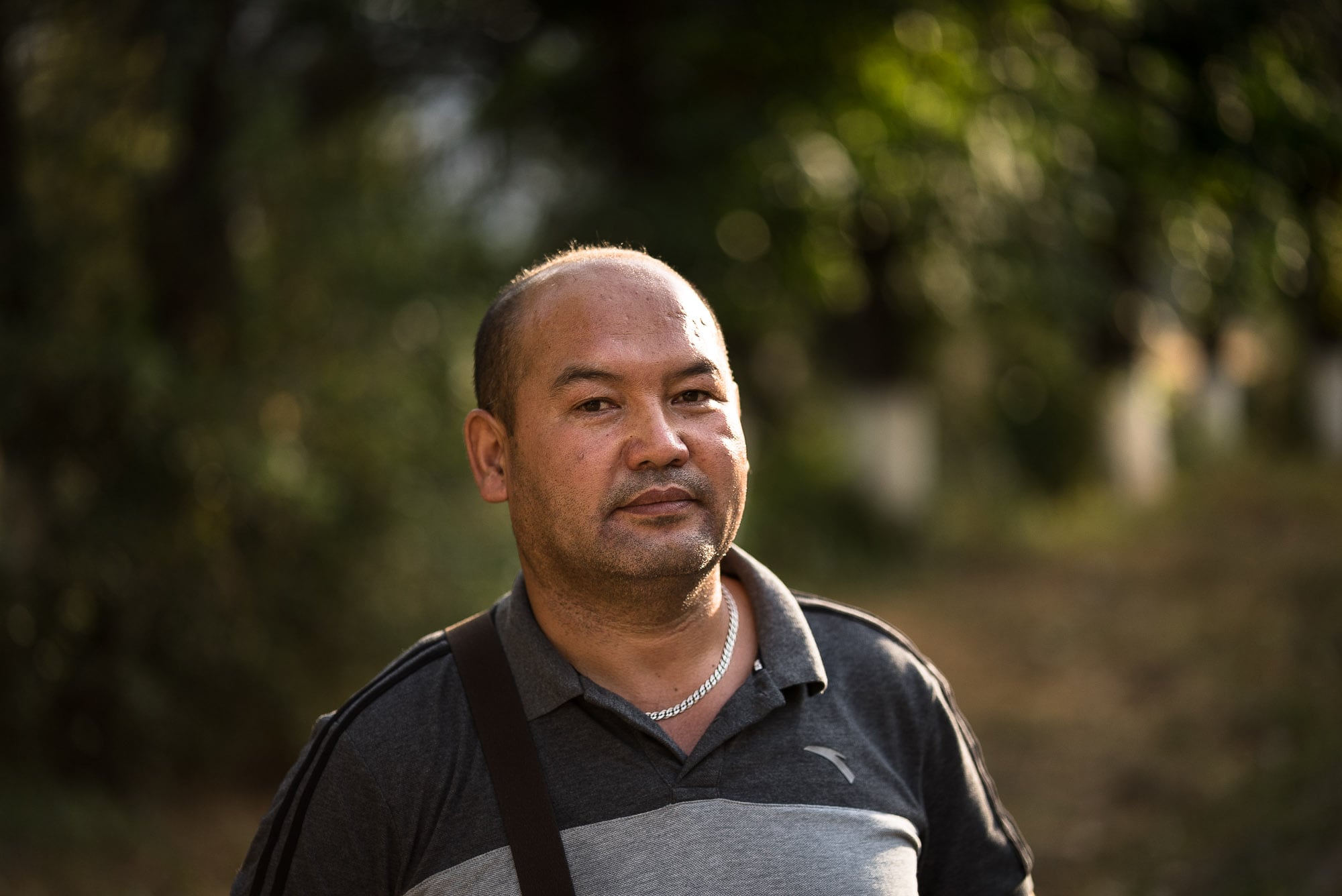 At first we had a hard time communicating, because his Russian was about as bad as mine, and I didn’t speak Kazakh at all. Then we found out that we both spoke Chinese (he had emigrated from China), and everything was perfect once more.

We walked past trees: 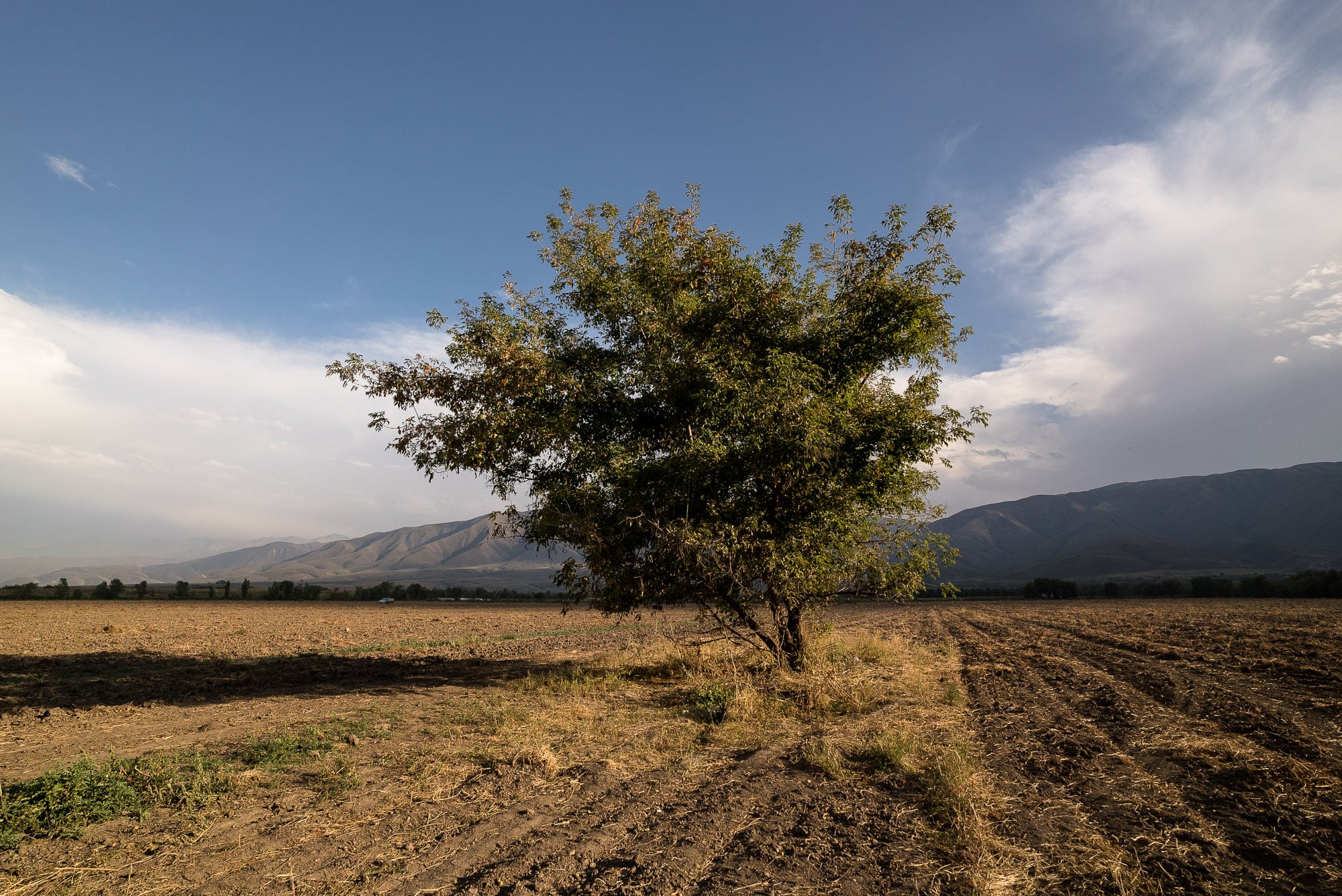 And we walked past mosques: 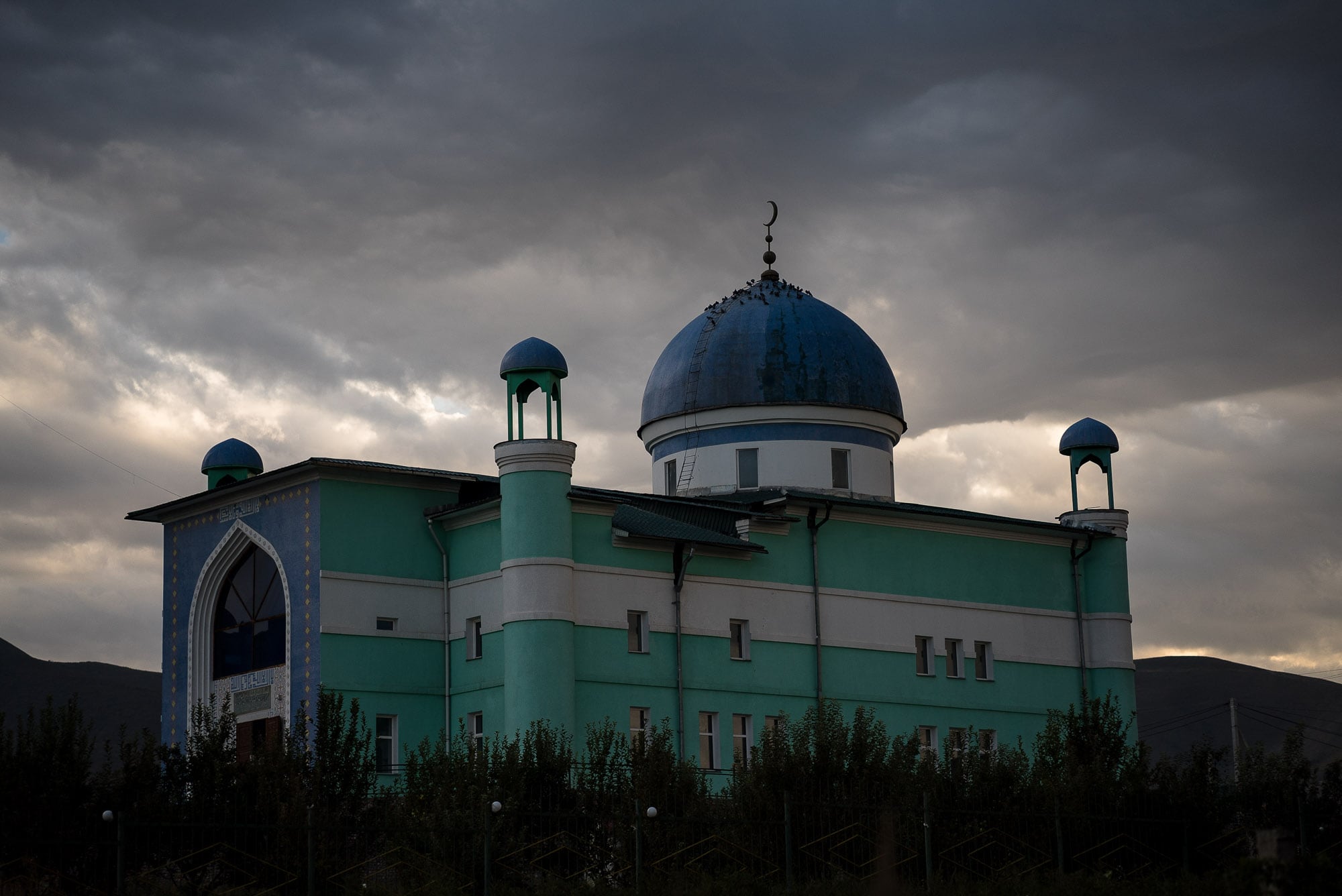 We talked about this and that. “Why don’t you just stay with me and my family tonight?” he asked me at some point.

He had just finished building a house in a small village: 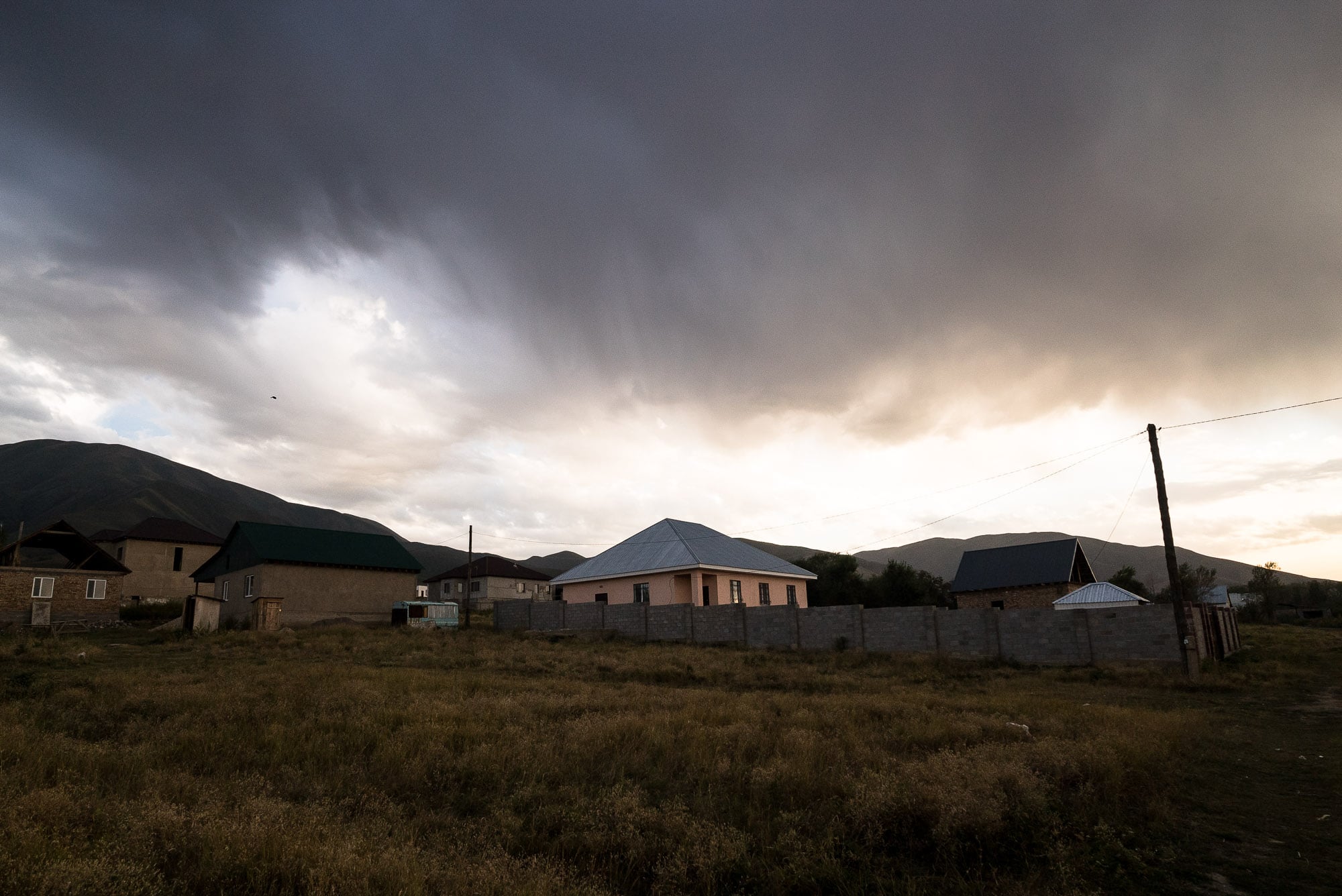 When we arrived, his two children seemed a bit shy at first. “Give them some time”, Yegbakir’s wife said. She had prepared dinner, and I was asked to sit down and enjoy the meal: 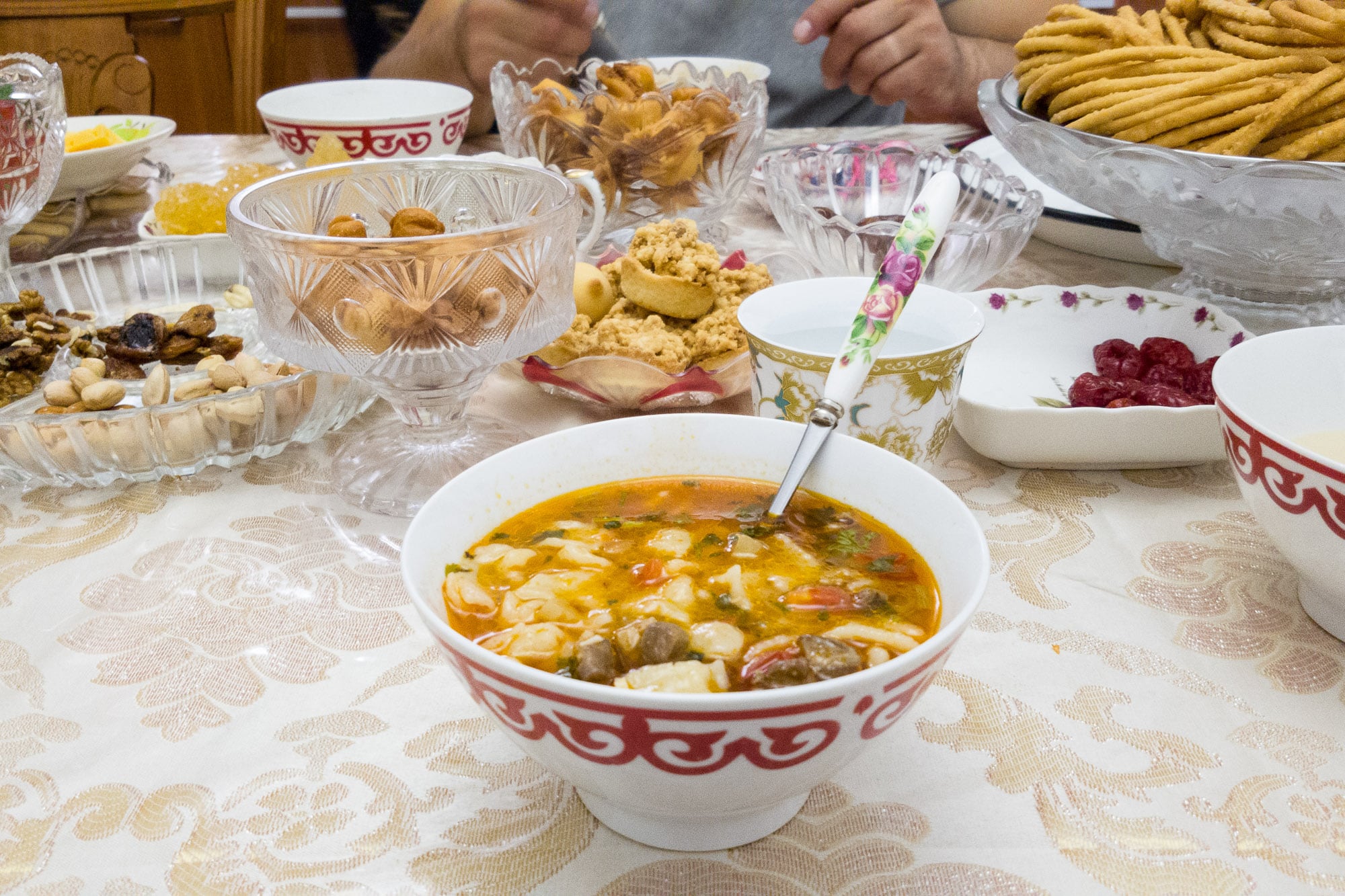 And enjoy I did, for it was truly awesome.

Then slowly, ever so slowly, the children really did warm up to me.

There was the son: 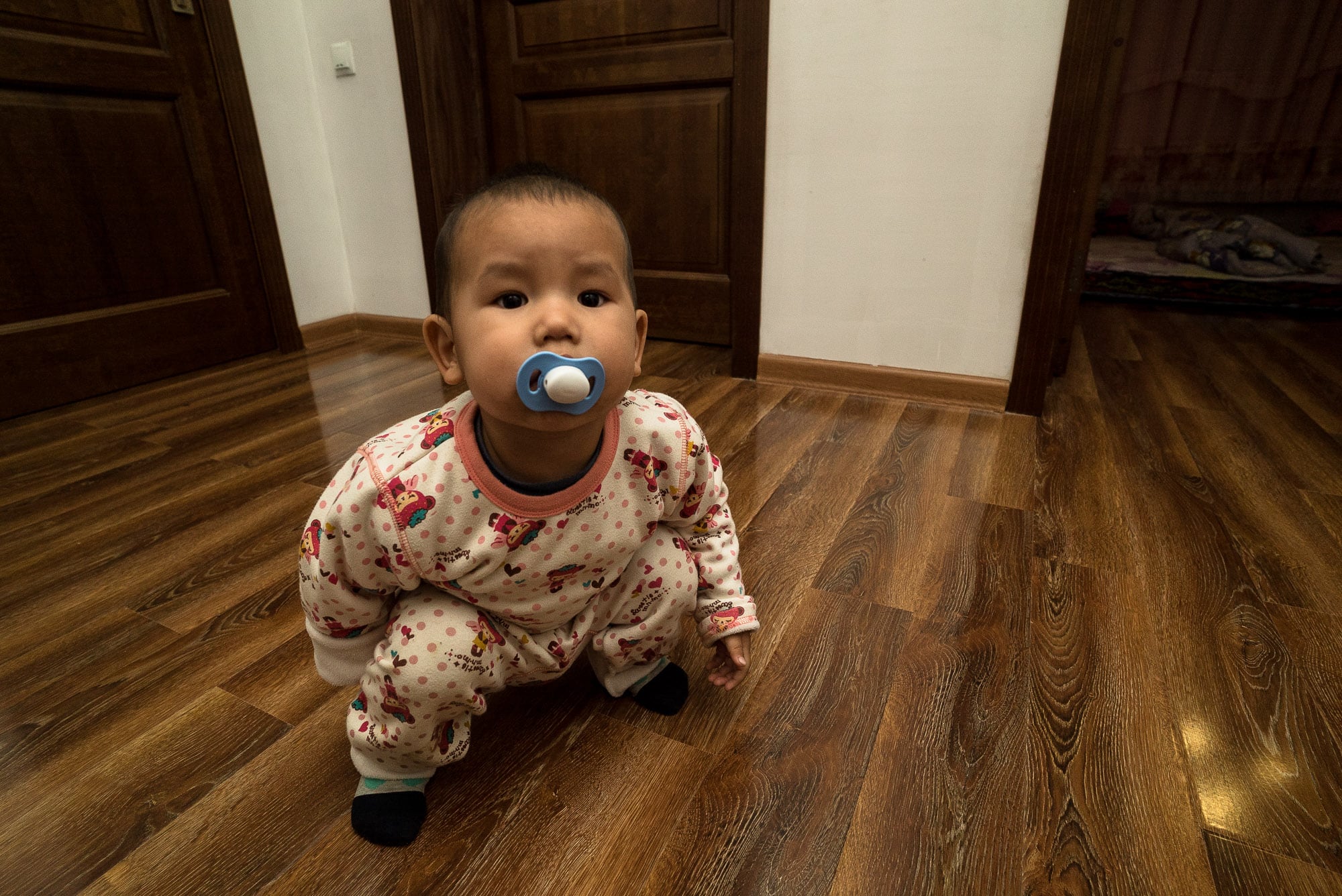 And there was the daughter: 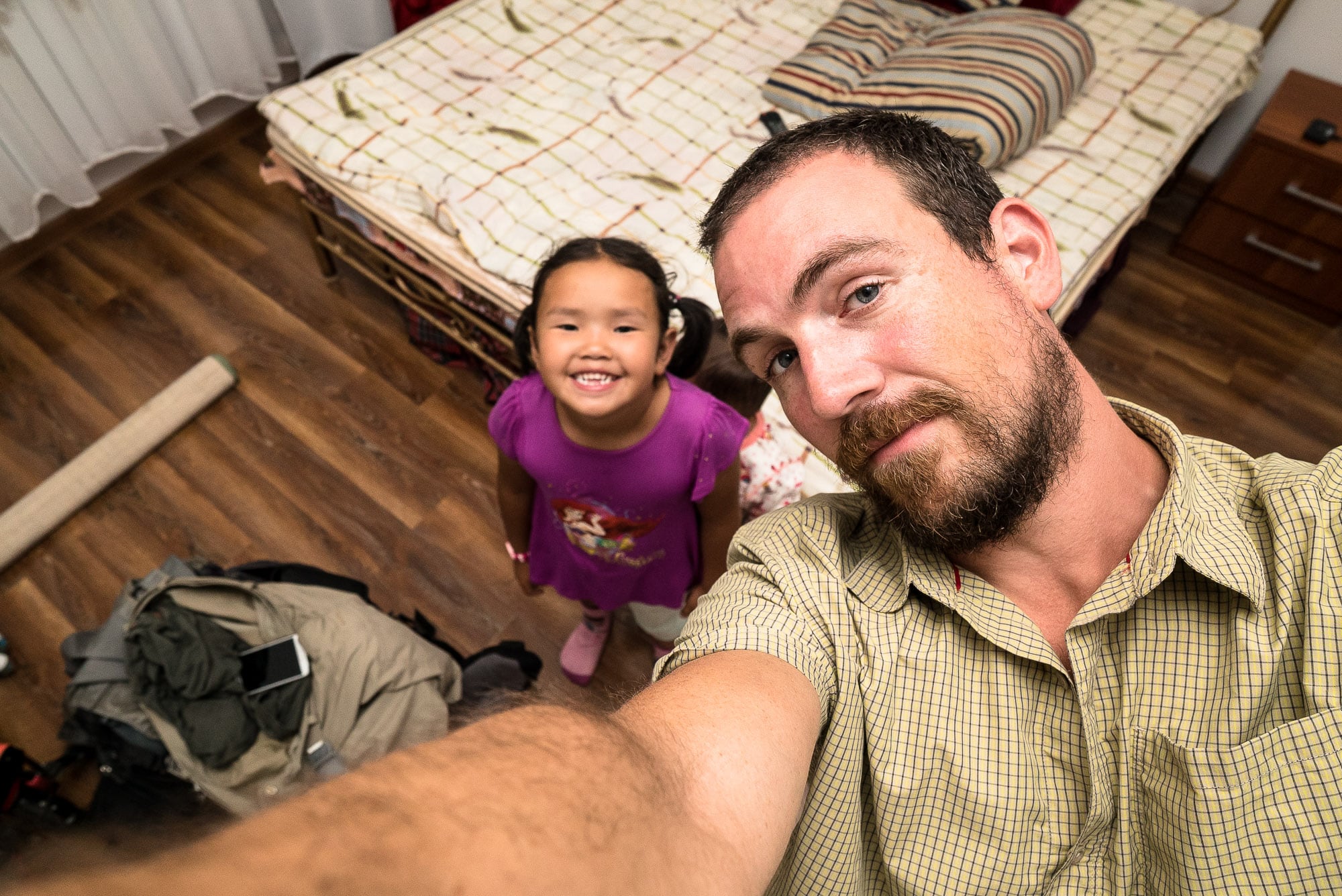 Everybody went to bed early that night. But first, Yegbakir prepared a hot bath for me:

As I was sitting in the bath tub, I could hear the wind behind the window. It was howling through the village and the mountains outside.

But I was inside, and the water was warm, and everything was good.

Thanks to all the nice people here.