So the walking was easy: 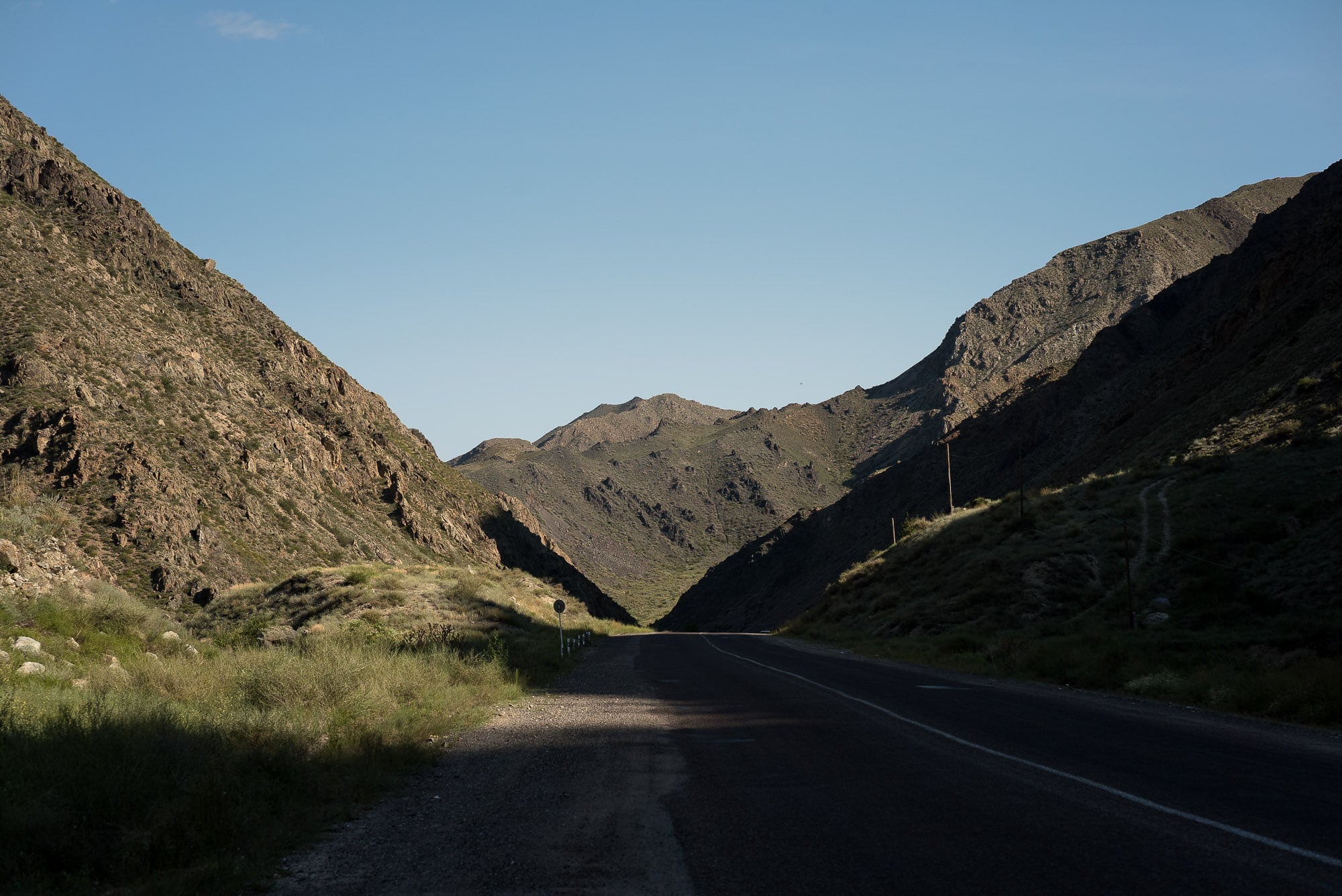 And the burden was light.

First I came through a large gorge. There was nothing in that gorge (people later told me that it was full of wolves at night), but there was one time when I saw a few houses: 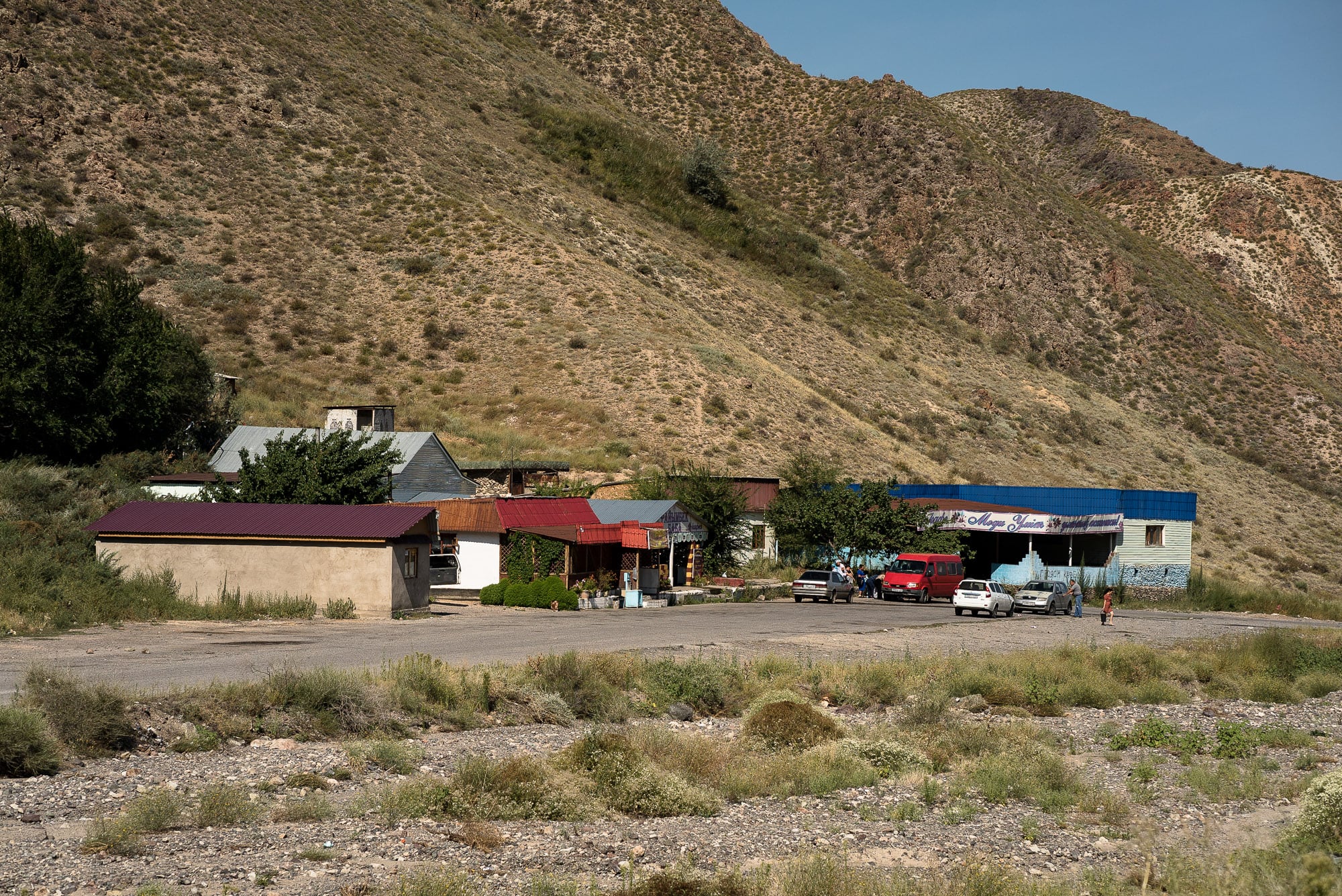 So it didn’t feel all that empty.

And then, after a few hours, I was back in the flat land, just a few hundred meters lower than before: 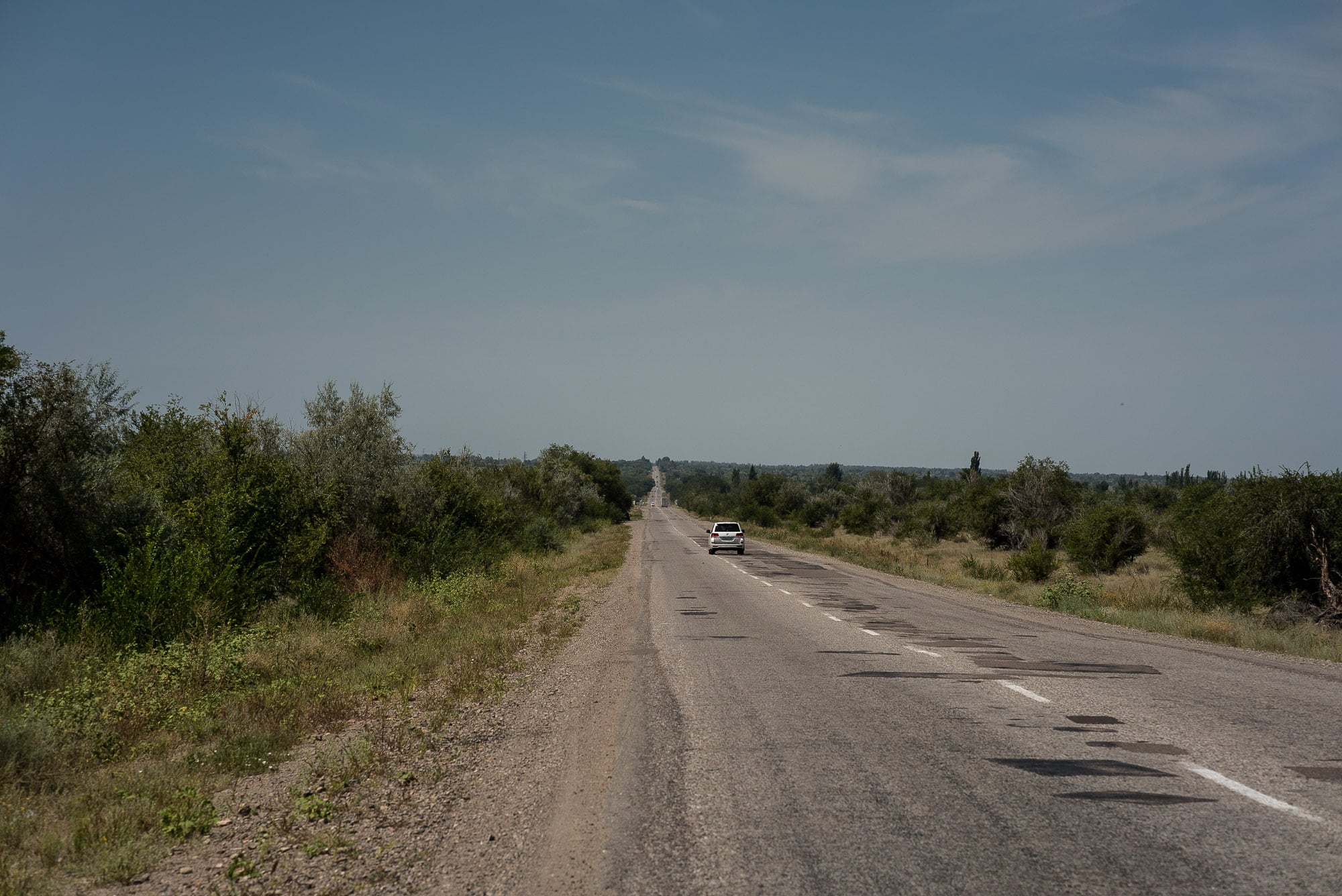 Once I saw a single tree: 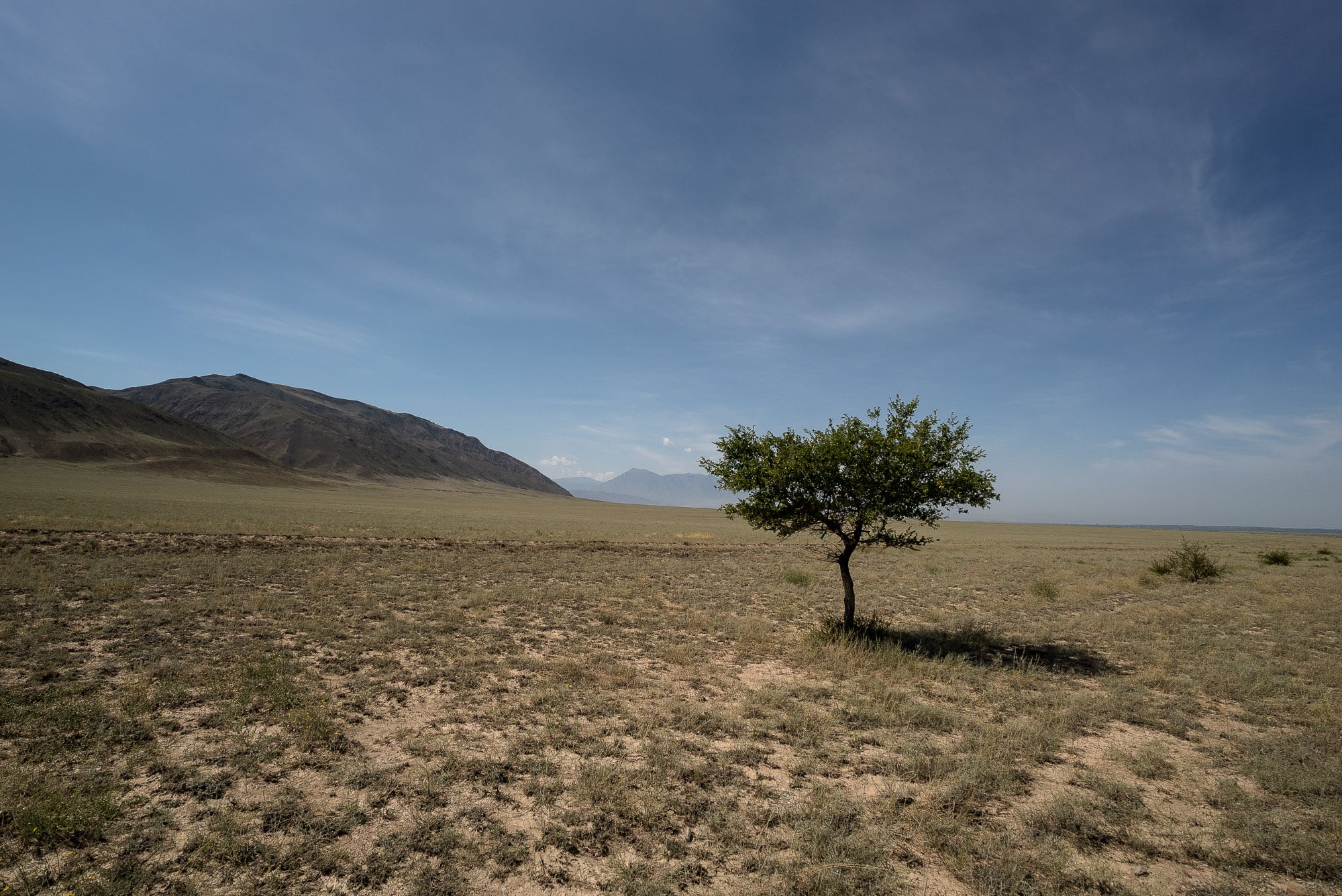 And once I came by what looked like a very sad grave: 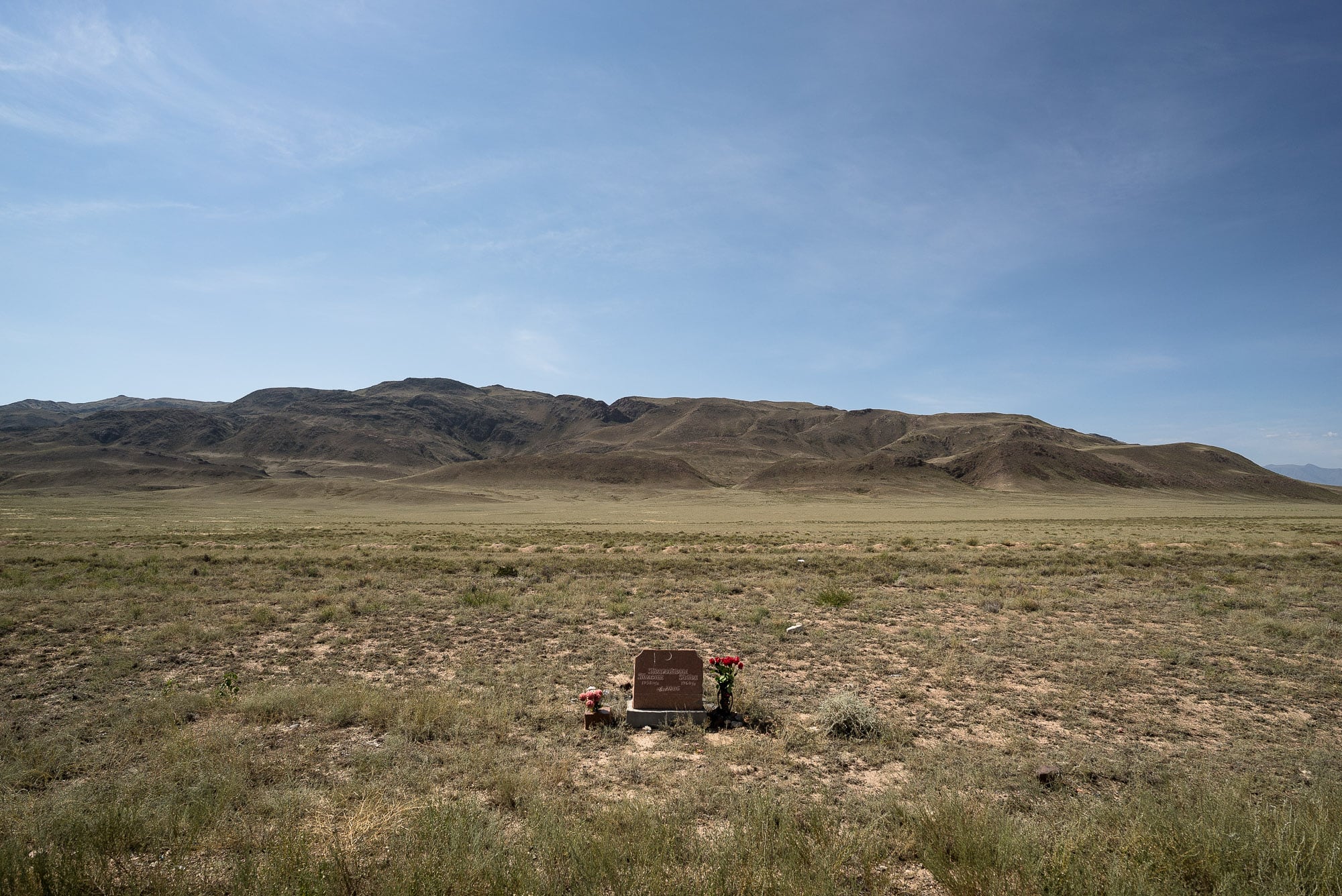 Two people had apparently died here on the same day ten years ago. They shared a grave stone together. The flowers next to it were fresh.

Then trees started appearing all around me, and it felt like I had left this part of the steppe behind me.

One time my heart almost stopped, because I passed by my arch-nemesis: 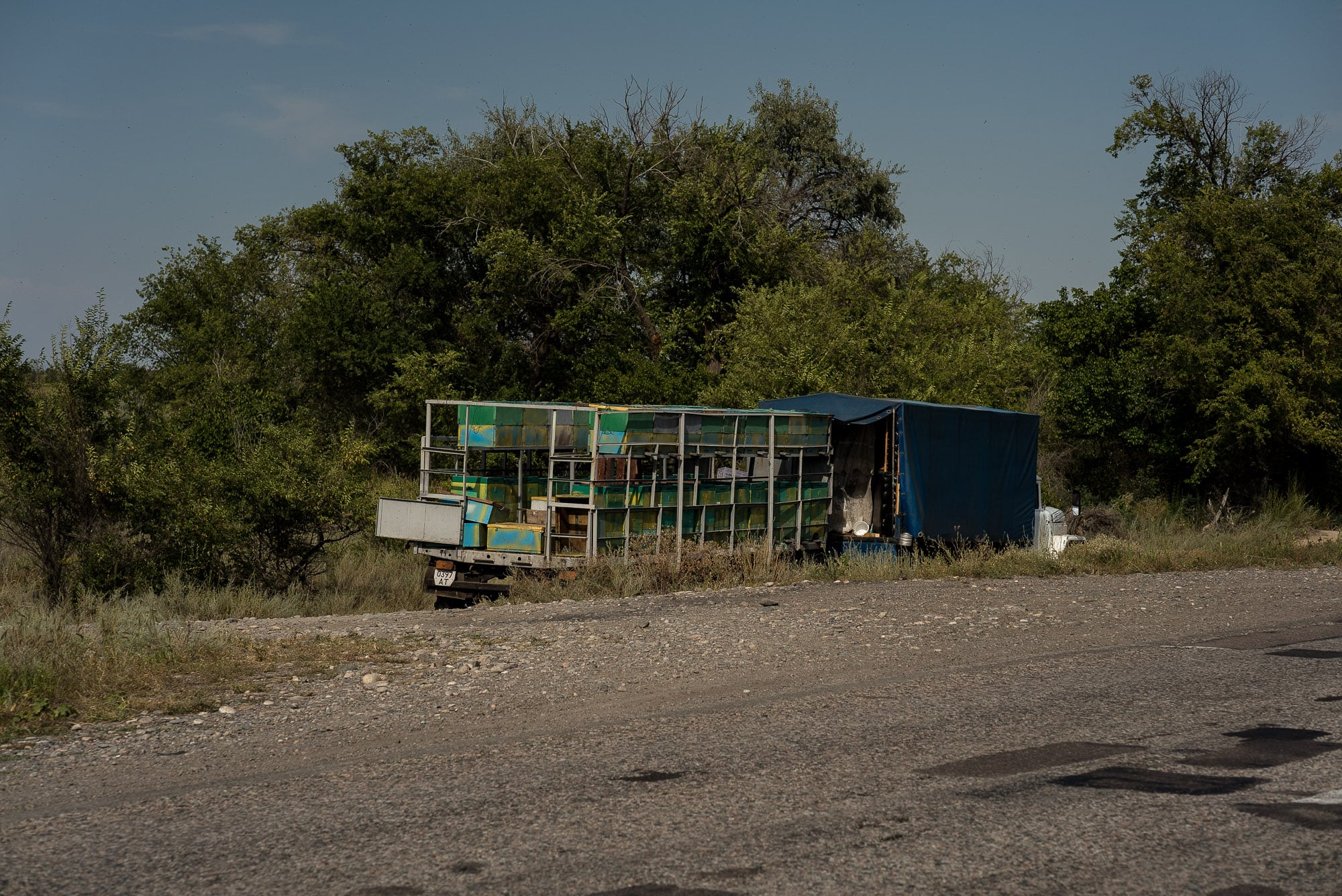 I found some shade under a tree where a donkey was happily munching on the grass. I slept there for a while.

Then I came through a small village with a large bazaar:

I sat down in a store and downed a bottle of lemonade, and an Uyghur lady gave me a flat bread and asked me about the web address of my blog. She liked the idea of me walking through these lands where her people lived.

And there were these guys: 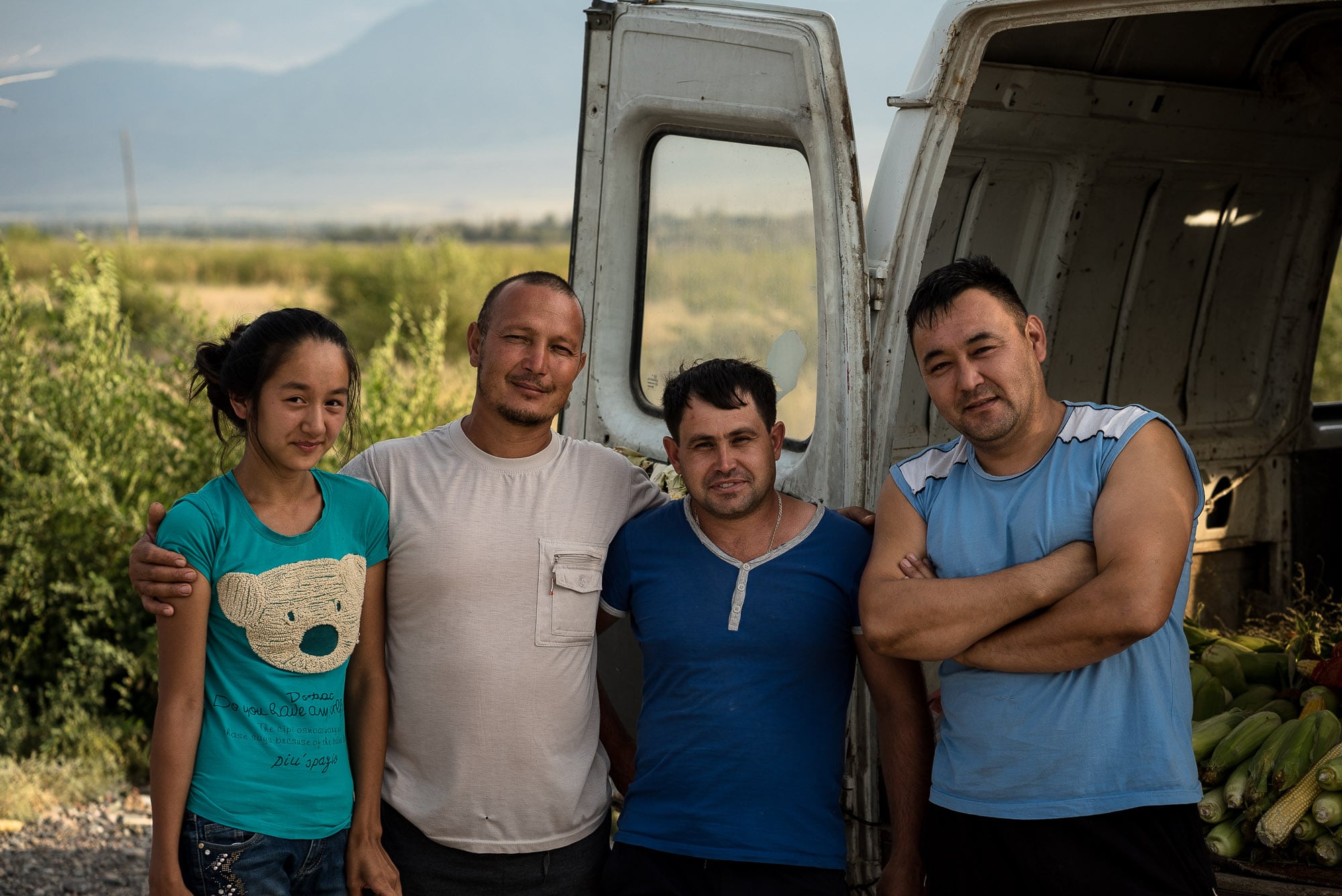 Also Uyghurs. They insisted on giving me a corncob, then they sent me on my way.

I was now on a newly constructed highway: 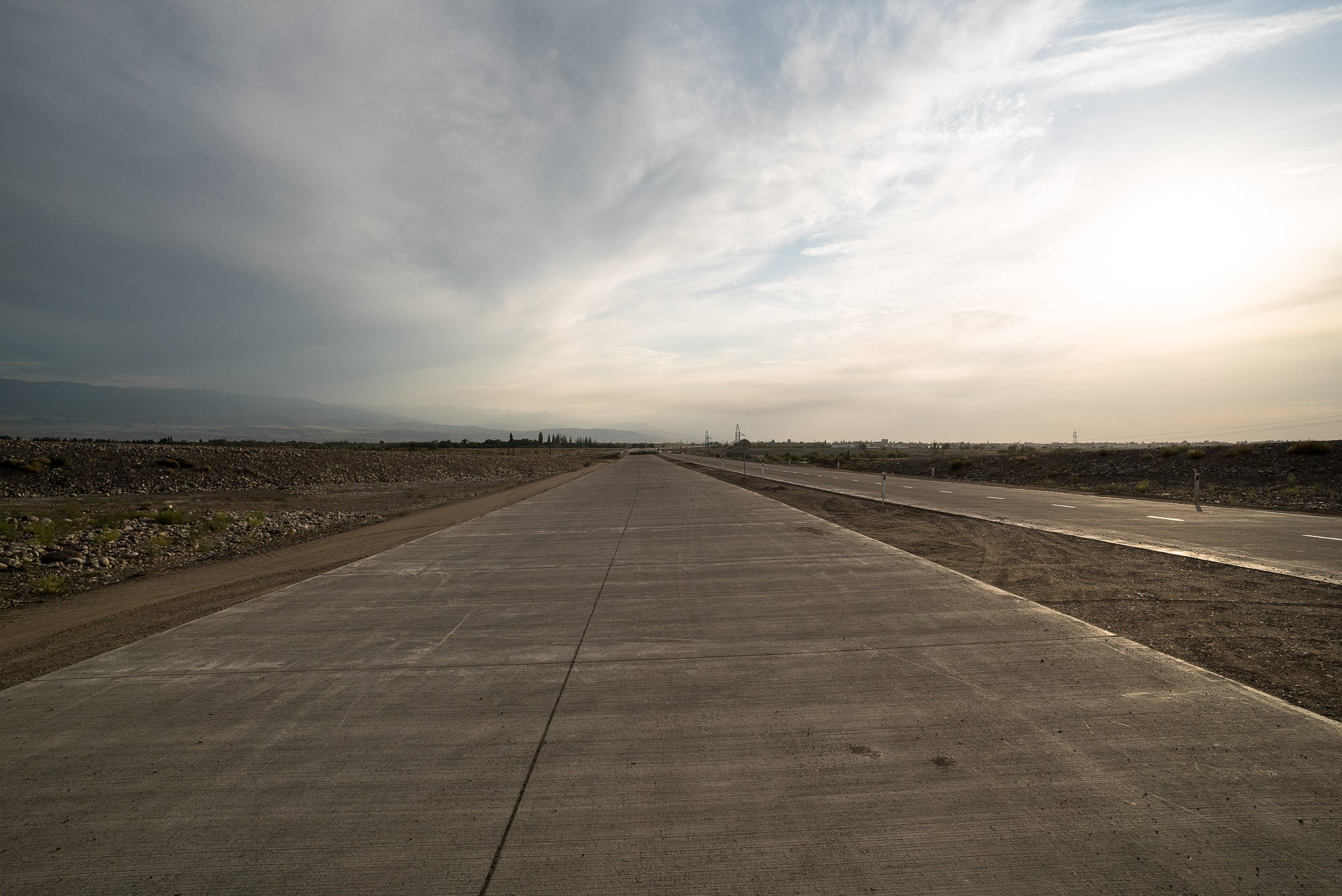 My side of the road was not open for traffic, which made walking very nice and easy.

Passed a river once: 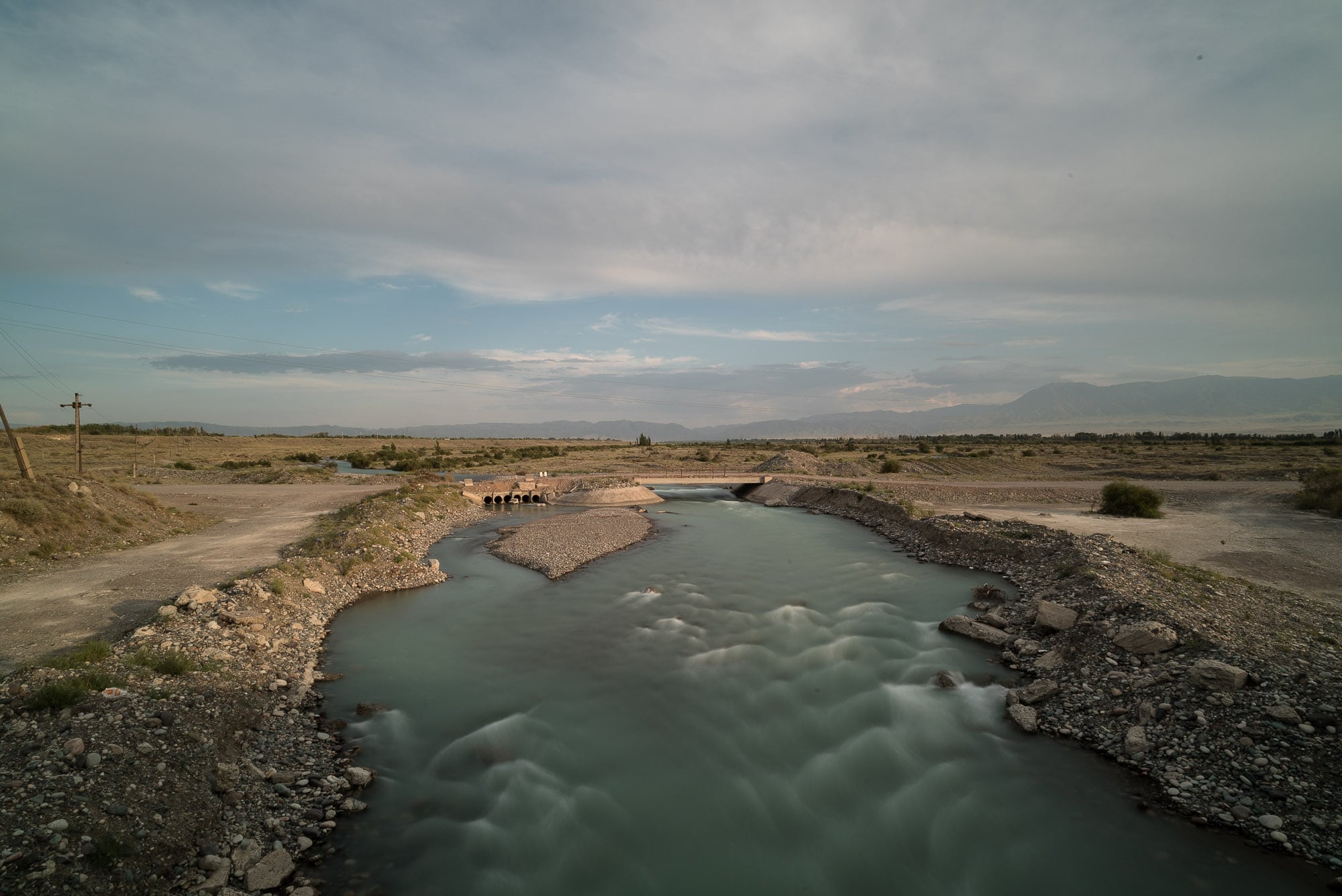 And then there was the large village of Shelek: 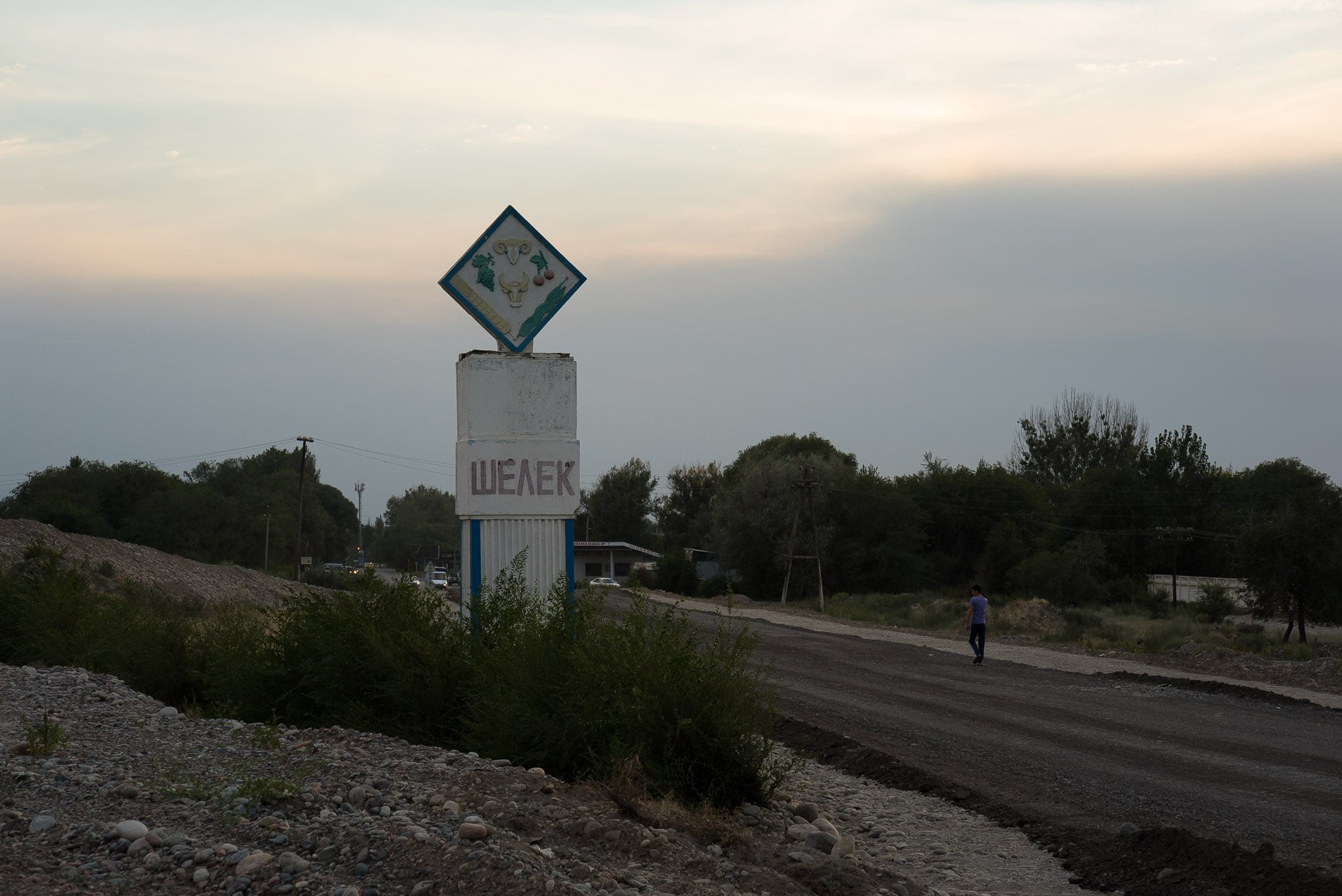 The more places I see, the more it seems as though all villages and settlements here have to have some sort of monument on the road, something to announce their existence to the world.

I stumbled around in Shelek for a little while, then someone kindly pointed me to a hotel.

It was a modest place, but it had something that other hotels didn’t have: 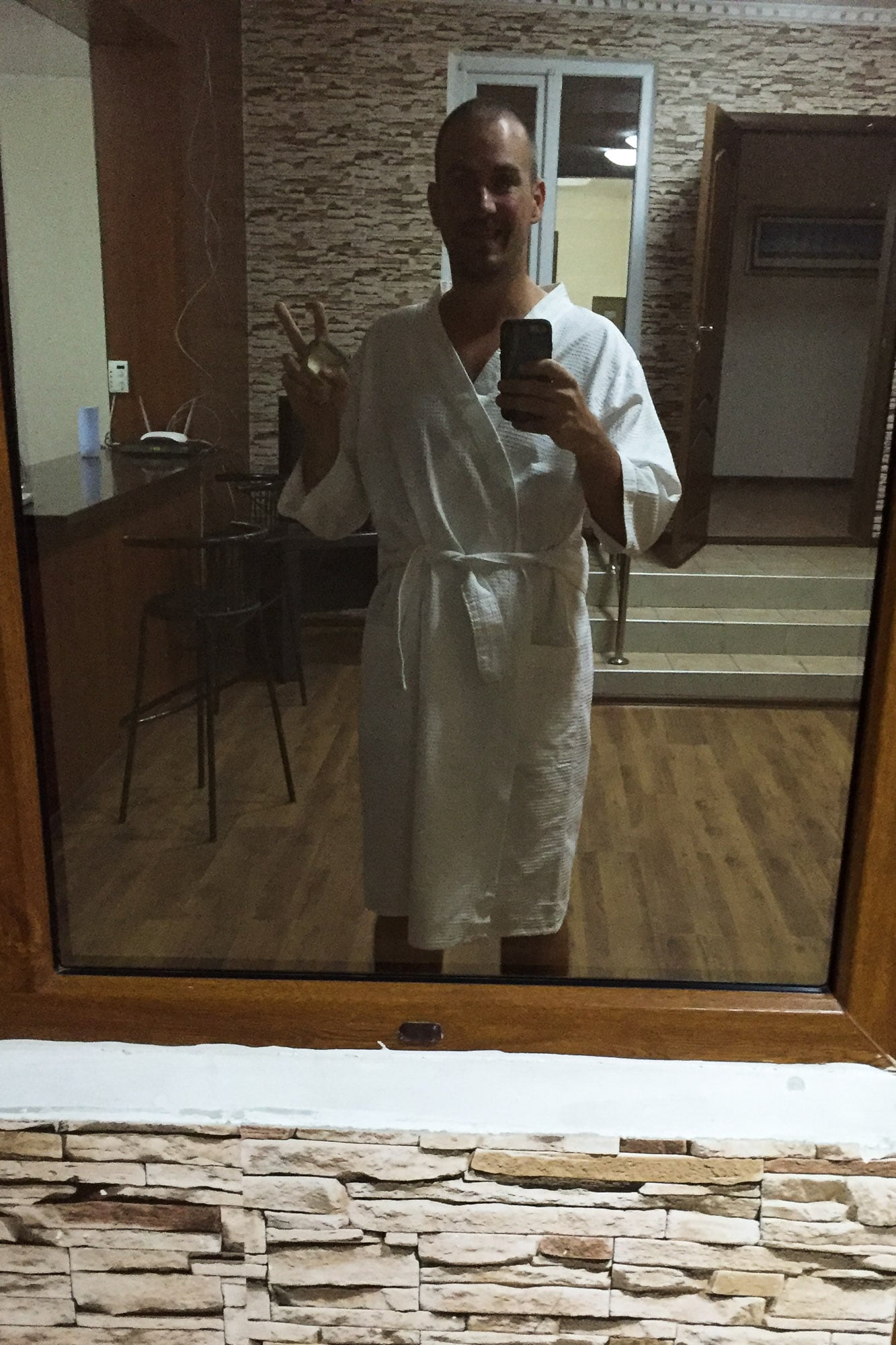 I ignored the fact that this more often than not hints at certain business practices (which in this case seemed to not be the case anyway).

And after a nice cold shower I sat down in my bathrobe and ate the flatbread and the corncob that the kind people that I had met on the road had given me.