Today saw me falling out of bed at five. There was an idea behind this: I wanted to snap pictures of the first sun rays creeping into the canyon. I had seen it the morning before, when it was already too late to set up the camera, and today I wanted to be on time.

But alas! parts of the sky were cloudy this morning, so there was nothing to photograph.

So I senselessly pointed the camera in one direction for a while: 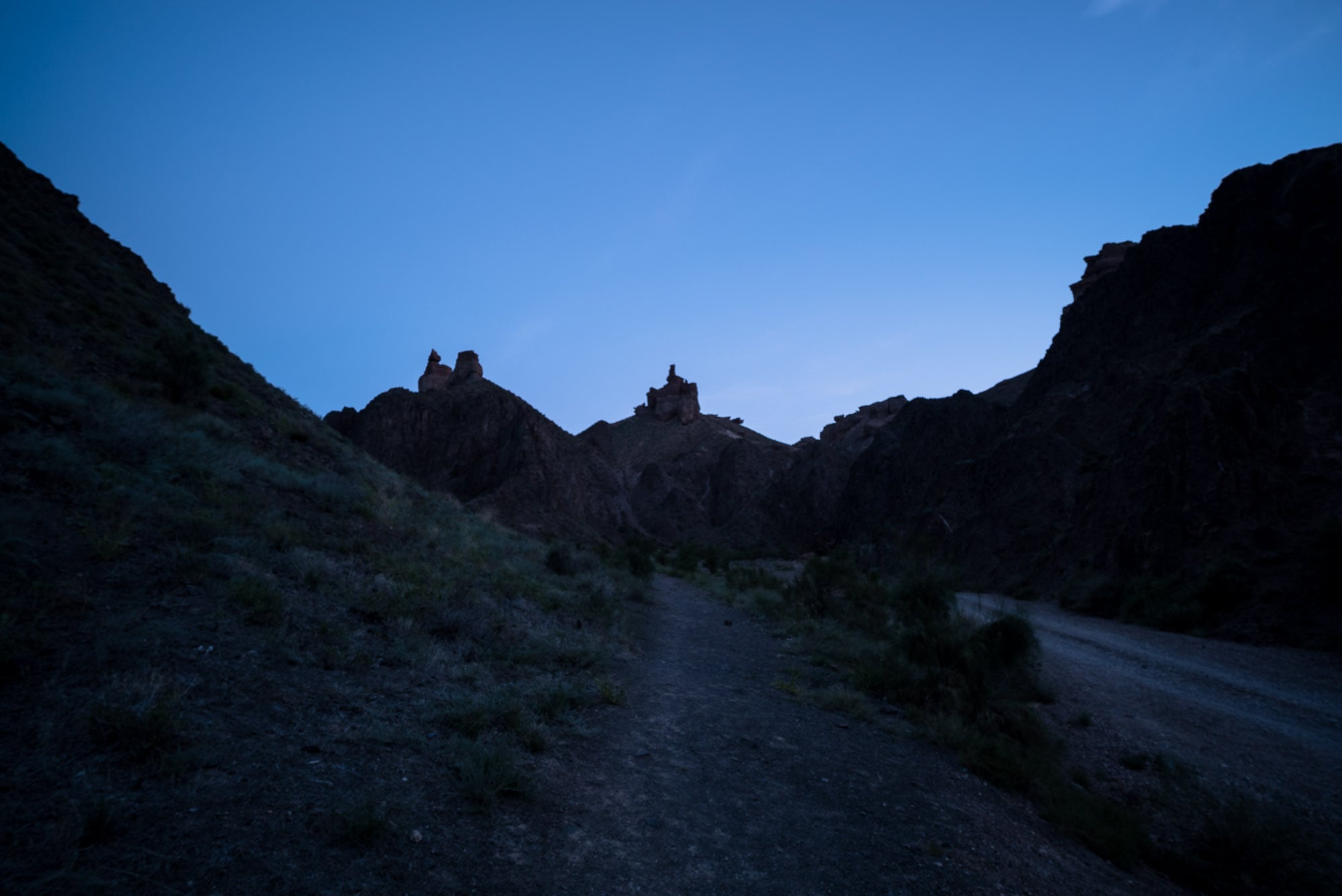 Then I went back to the hidden spot, undressed and relaxed.

It was around noon that I started to ask around if anybody could help me move the Caboose out of the canyon. I figured there was really no way I would get her up the evil slope, so I needed someone with a car to help me out. 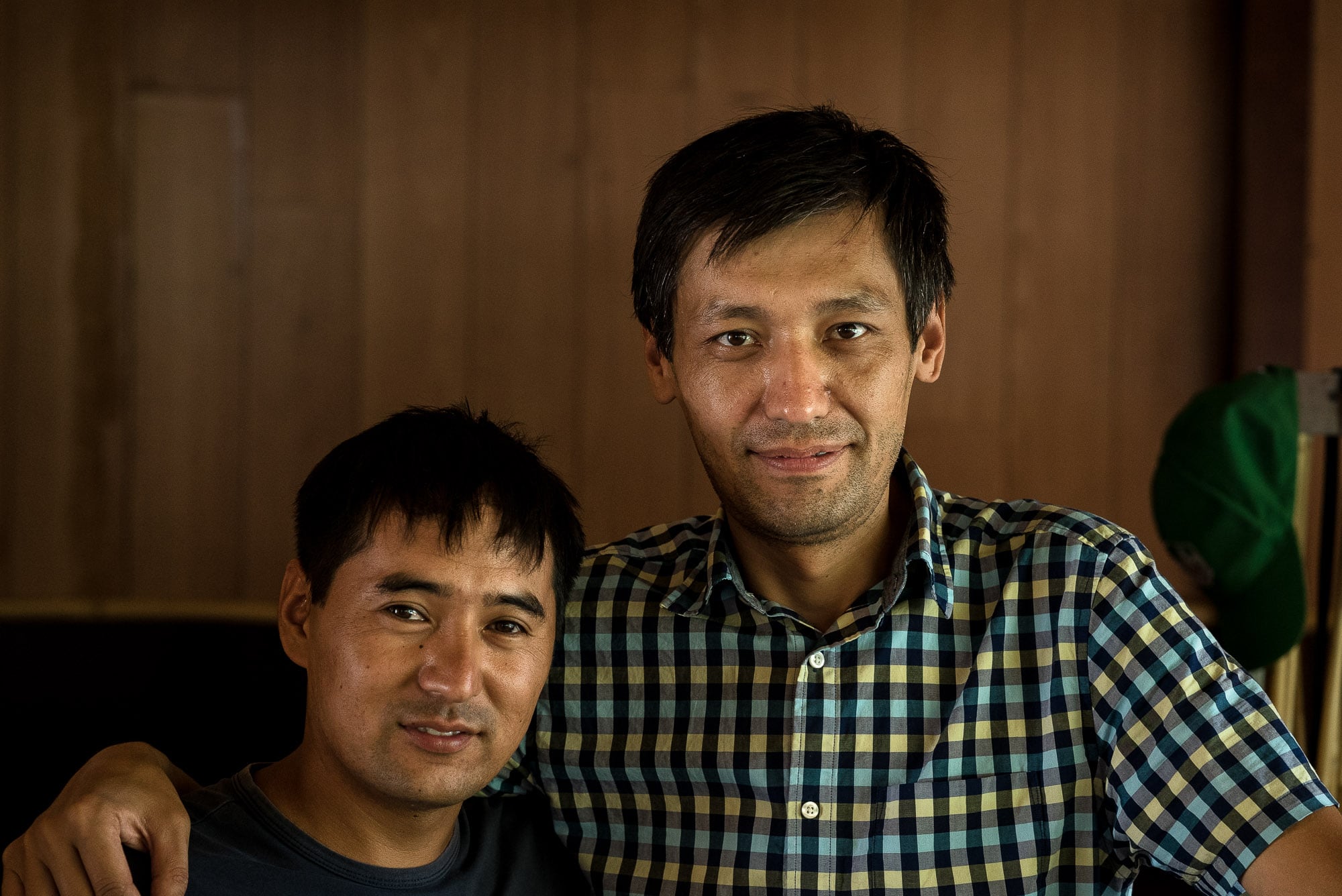 Ildar (the guy on the right) is the administrator of the eco park. He introduced me to two of his friends who had just come down the canyon to drop off supplies. Sure, they said, they could help.

So we separated the big white box from the Caboose and loaded it into the car: 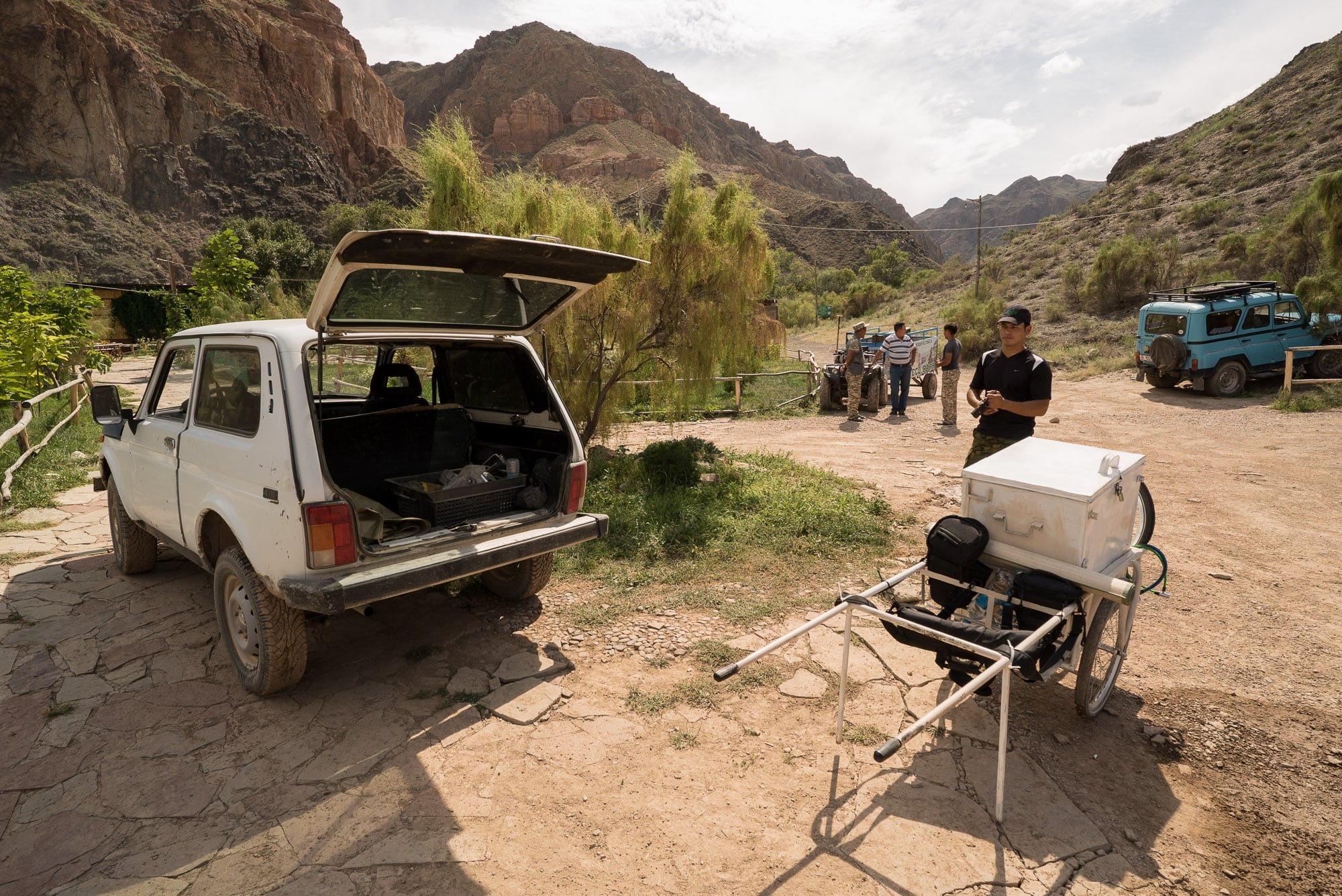 Then we agreed on a place where they would drop it off atop the canyon (at the pavilion), and then they left.

I packed my backpack and took the now super-light Caboose, and we slowly made our way up the road. At one point I noticed a long set of stairs. I figured it couldn’t be worse than the way we had come down.

And it really wasn’t:

When I arrived at the place where the two guys were supposed to have dropped of the box, I saw nothing. I saw the pavilion. But no box: 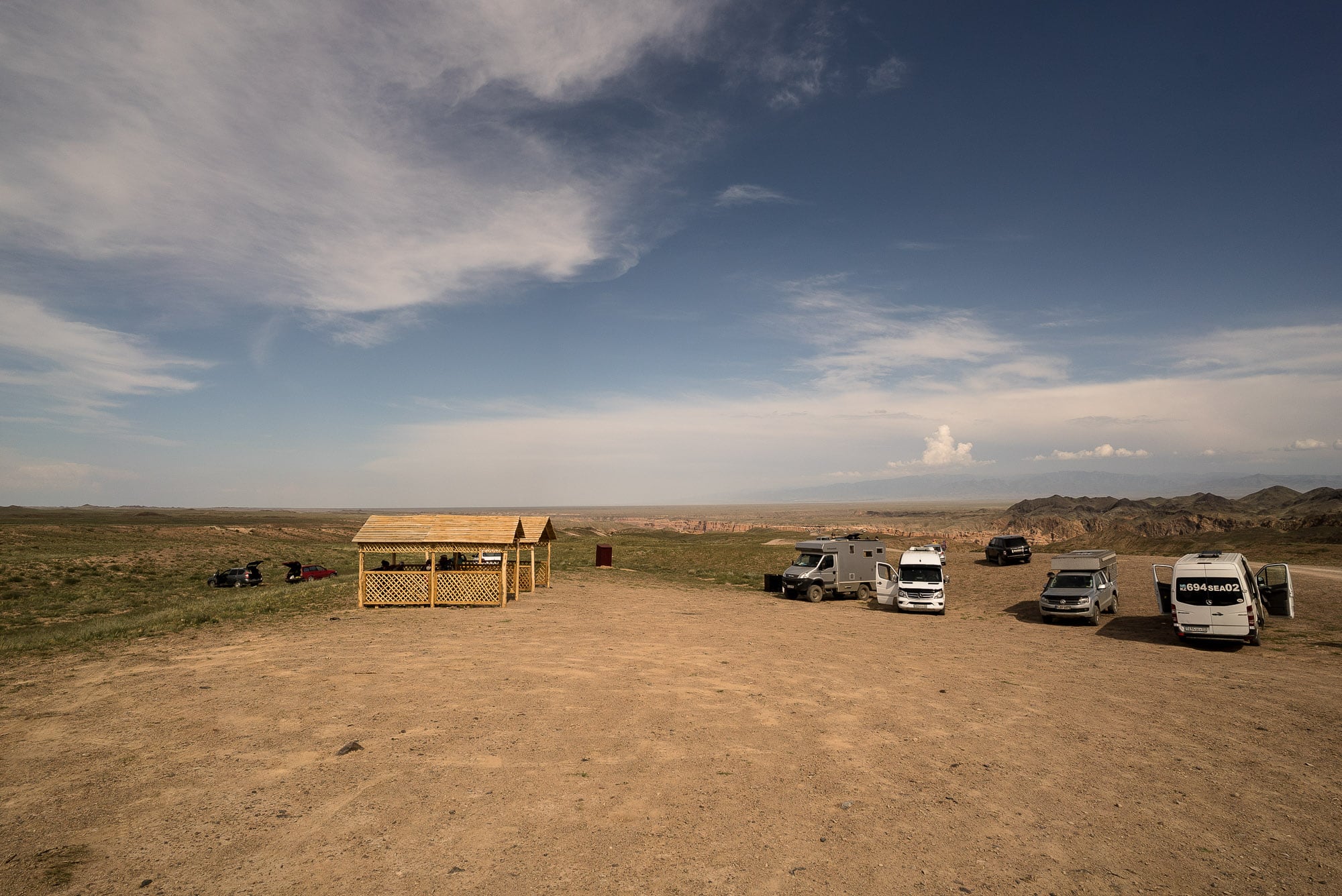 Panicking, I ran around asking random people. Nobody had seen the box. Or the guys in the Lada.

Then someone suggested I walk a bit further on. There would be another place similar to this one. Another pavilion. Maybe my box would be there?

Of course the box turned out to be there. And not only the box. I also found a Chinese tour group.

I took a bunch of pictures with them but then somehow managed to lose them all, idiot that I am. But anyway, they were awesome. I ended up with all kinds of food from them: 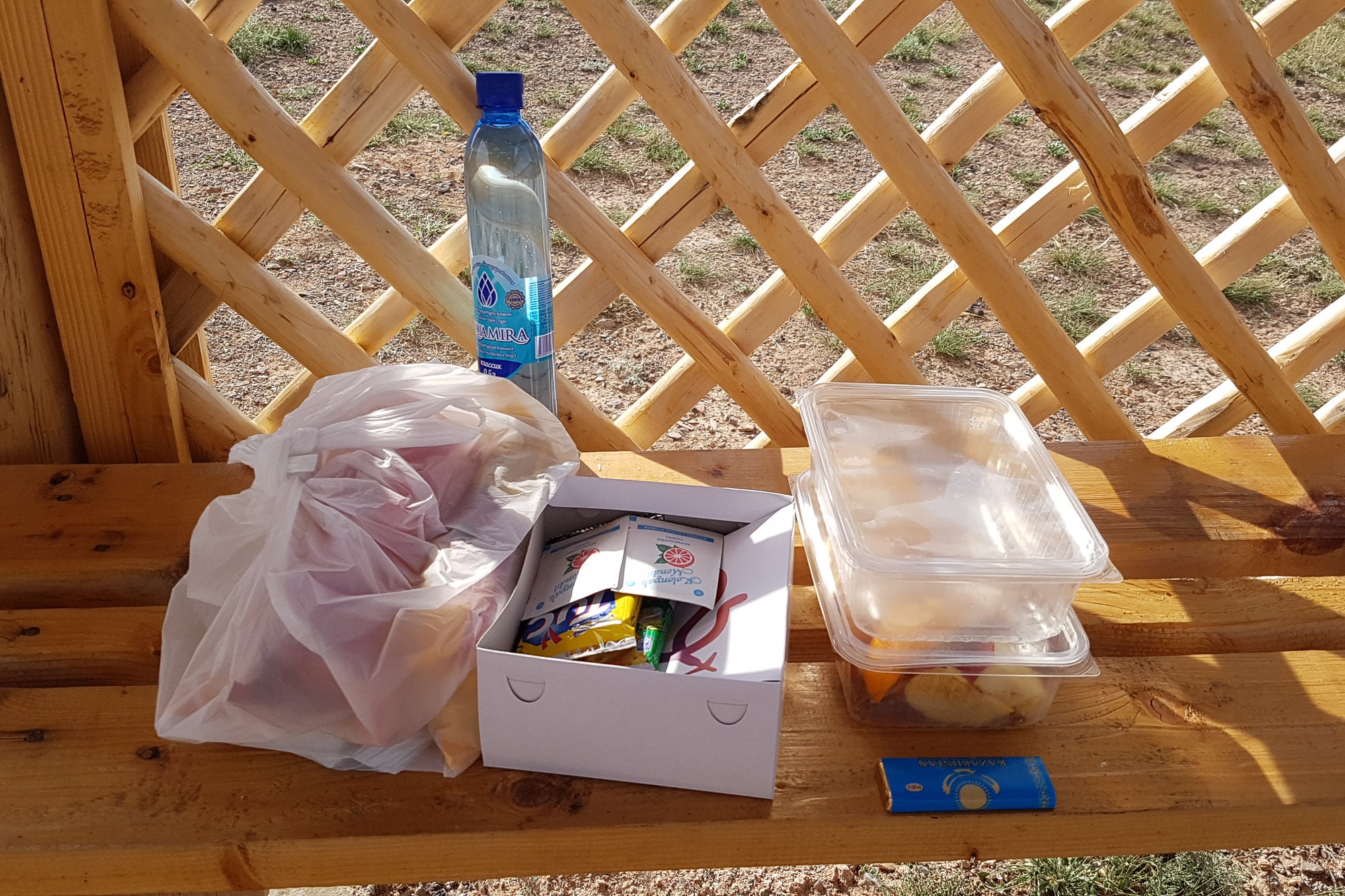 Then I started looking for a place to sleep. It was going to be the tent, that was for sure. But I wanted to be in the vicinity of people I felt I could trust.

That’s when I ran into Iliana and Emil from Switzerland: 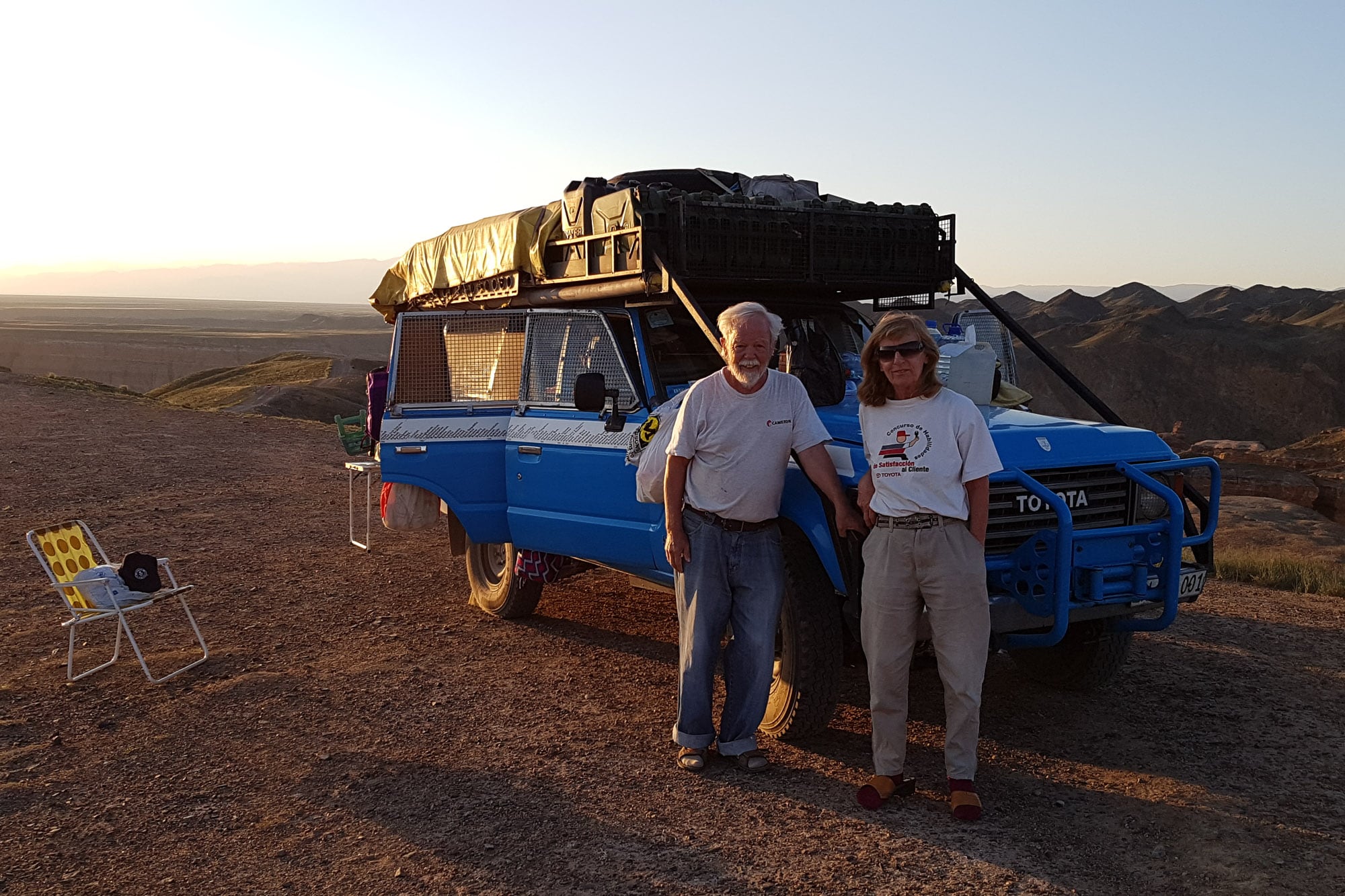 They had been traveling the world in their car for years, and they were very friendly. We decided to become neighbors in this place with a view: 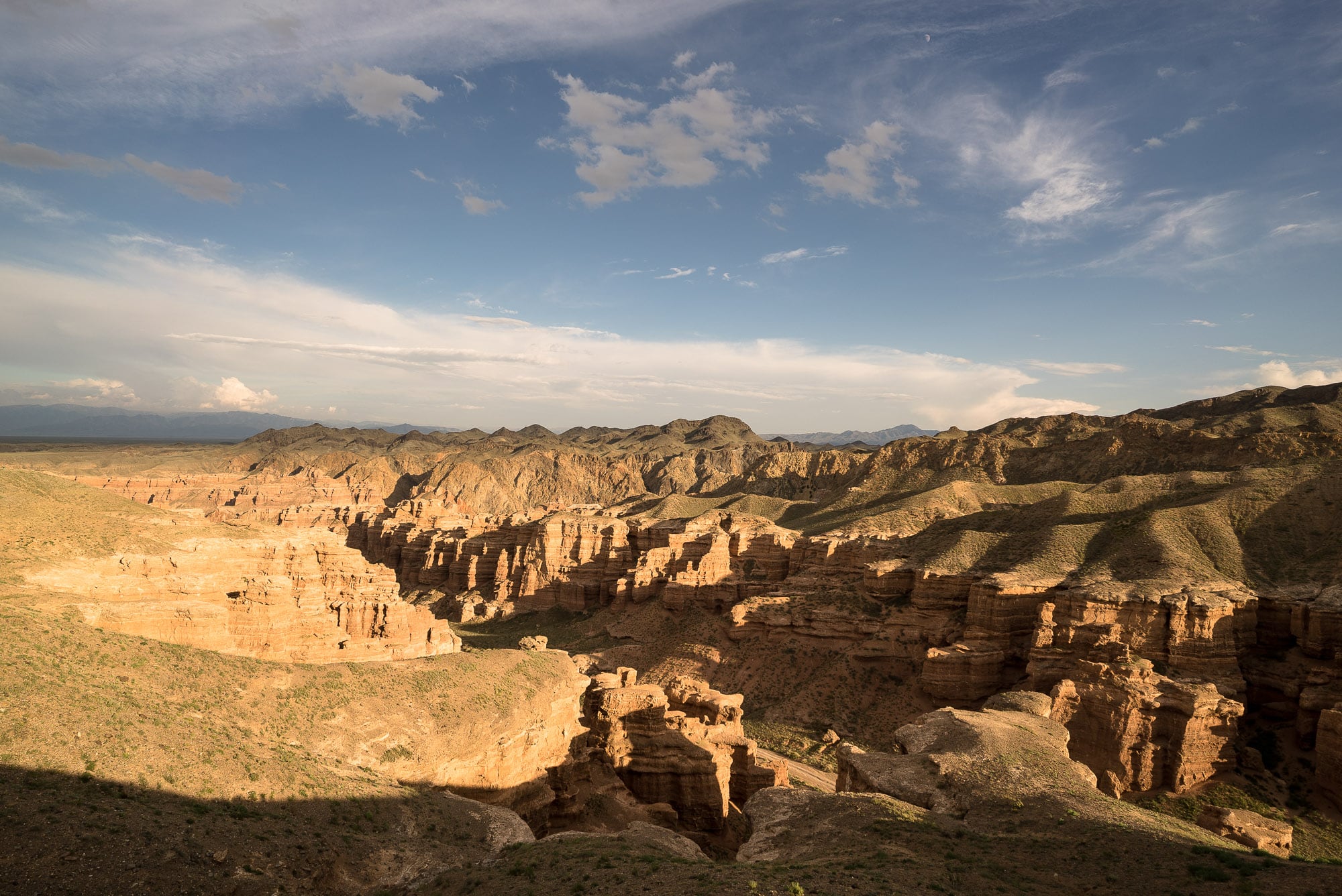 I set up the tent and got out my food, and then, for dessert, I even had a piece of chocolate that a kid from the Chinese tour group had given me: 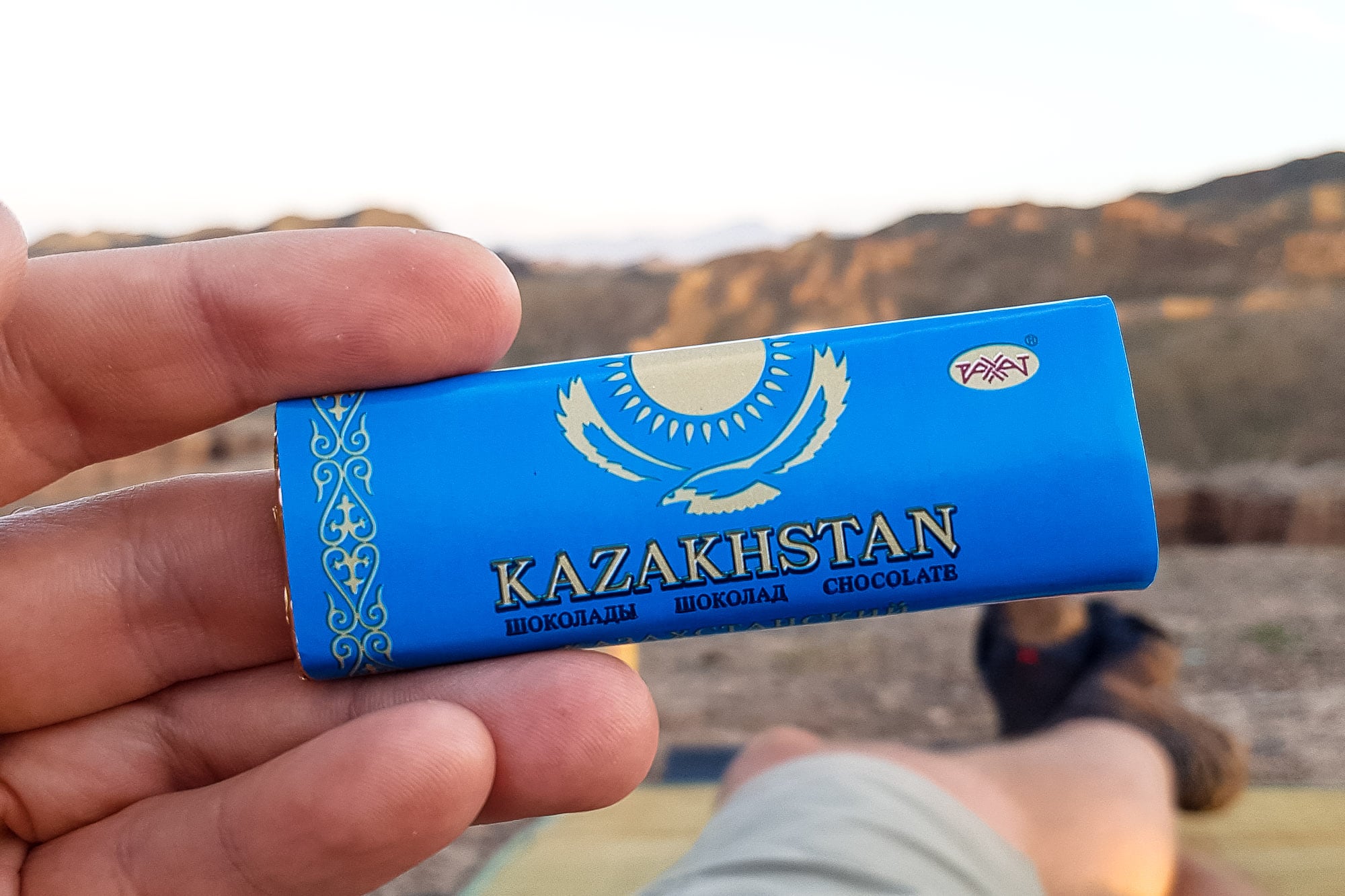 It was all good:

We talked for a while, then night fell, and when it did, it turned out to be even more beautiful than during the day: 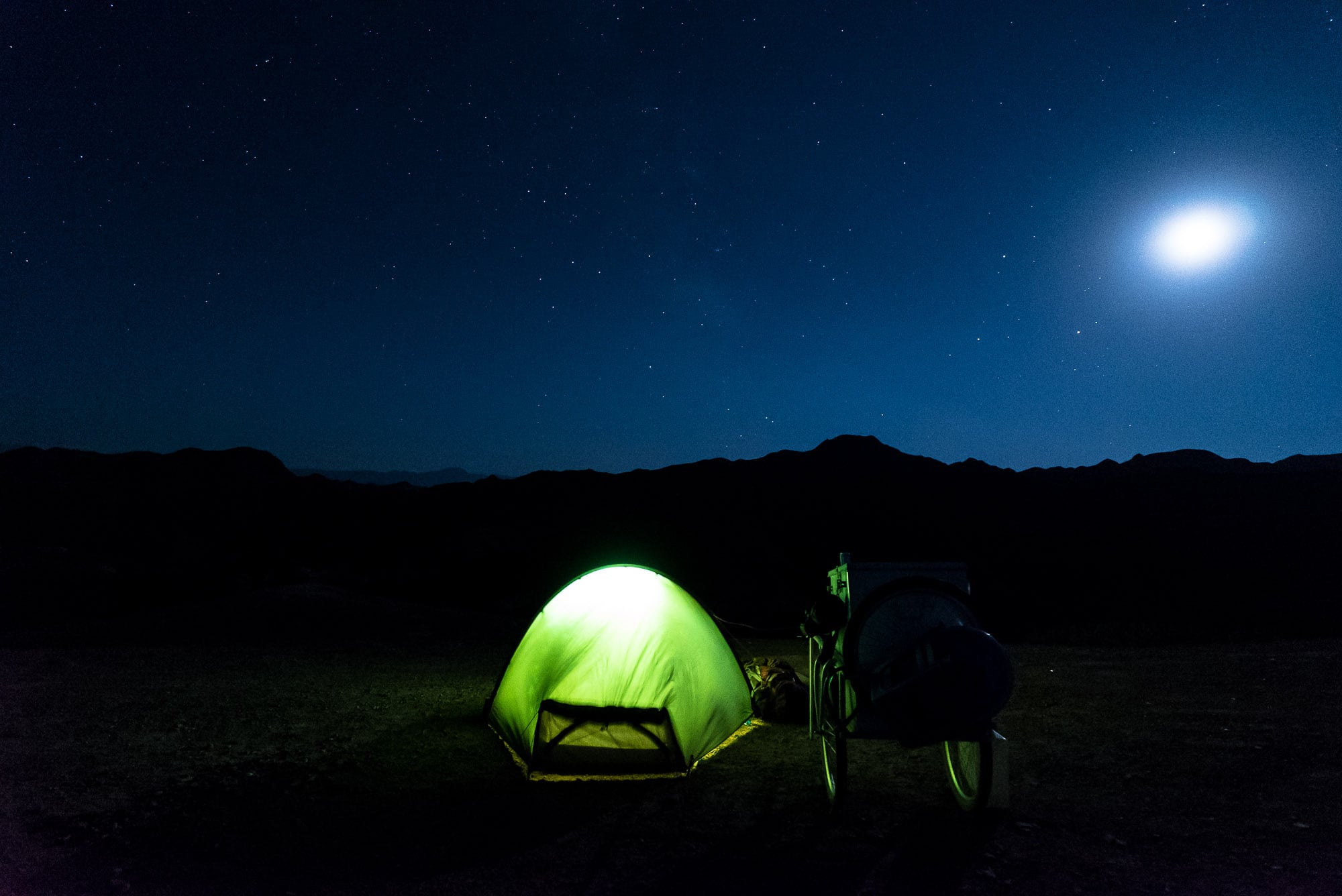 I again set up the camera, because I wanted to take photos of the Perseid meteor shower that was supposed to happen at this time: 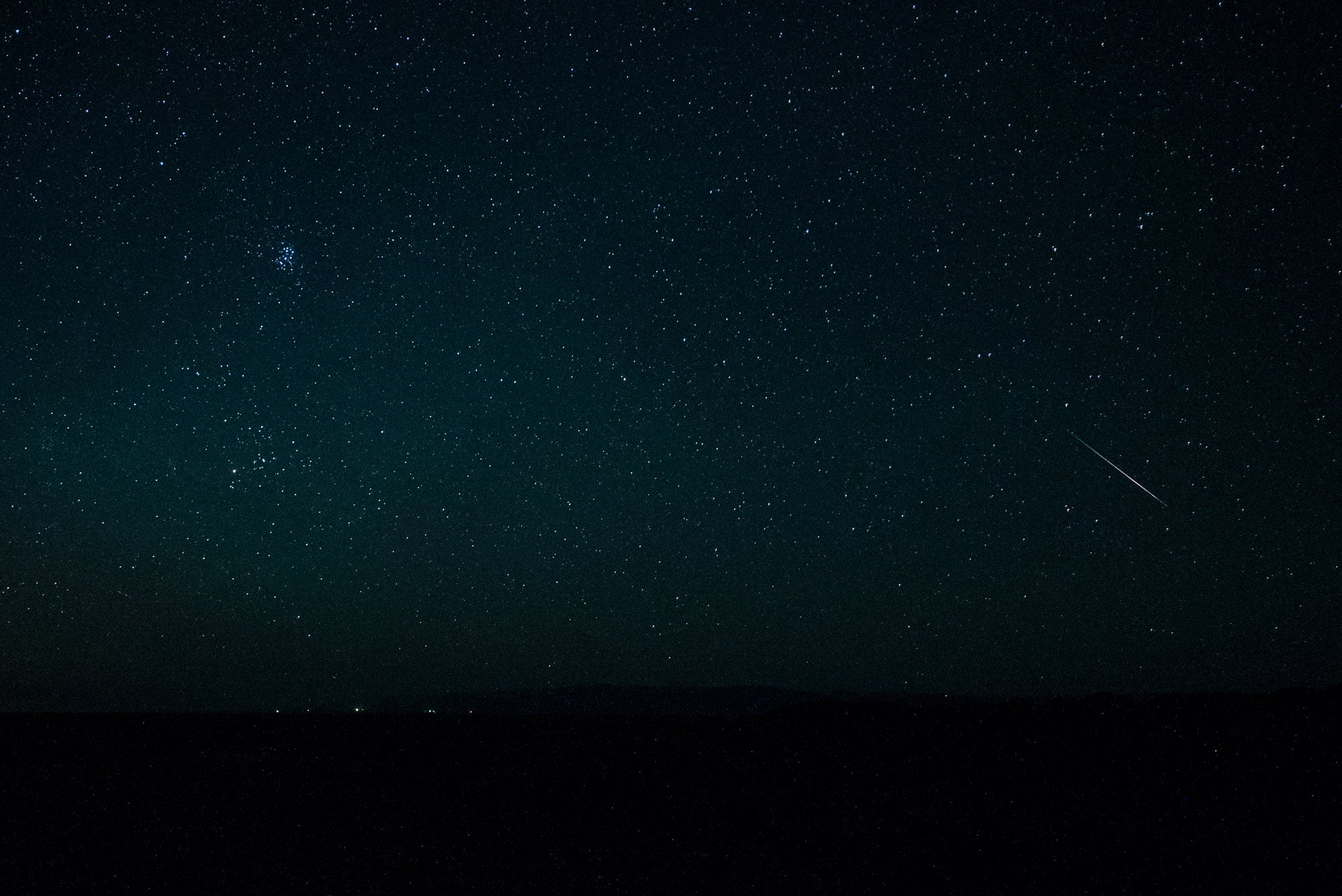 And yes, there were indeed some shooting stars.

It was a beautiful night. But it was also a night without much sleep. That’s because at some point, the wind rose and started howling around the canyon:

And it never stopped until the break of day.