It all started with a hangover.

Yet I didn’t really want to.

I made the decision to leave around noon. That’s when I rolled out of bed, packed my stuff, loaded up the Caboose, and then took her and the little red bicycle to a gentleman down the street who helped me tie them together. He smiled when he saw me: 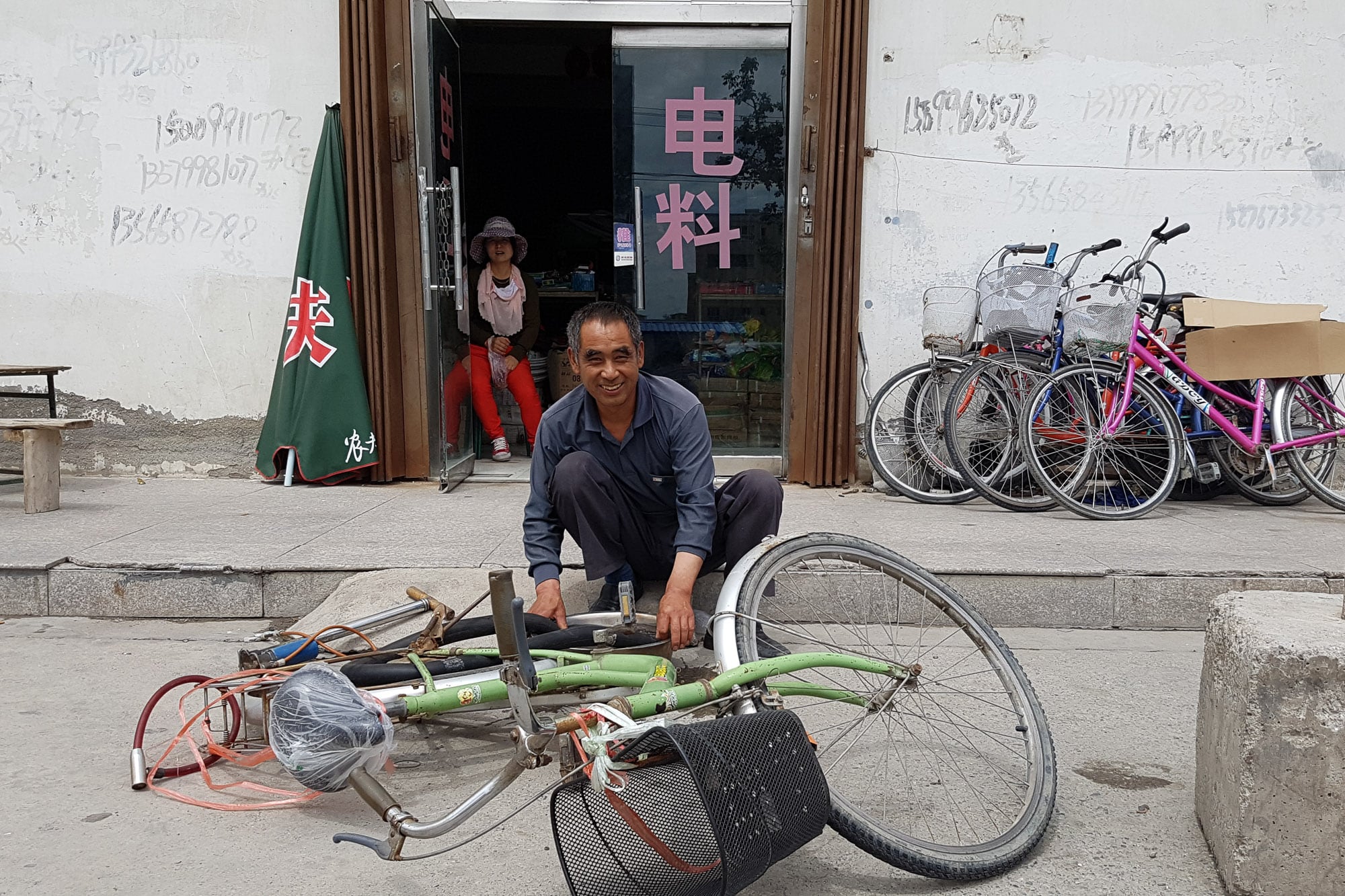 The border guards had told me that both the Caboose and the bike had to become ONE vehicle, only then would I be allowed to cross.

So we made them into one:

And then I rolled up at the border:

The border guards were still there. They laughed when they saw us: the Caboose, the little red bike, and me.

Then they pointed to a gate: 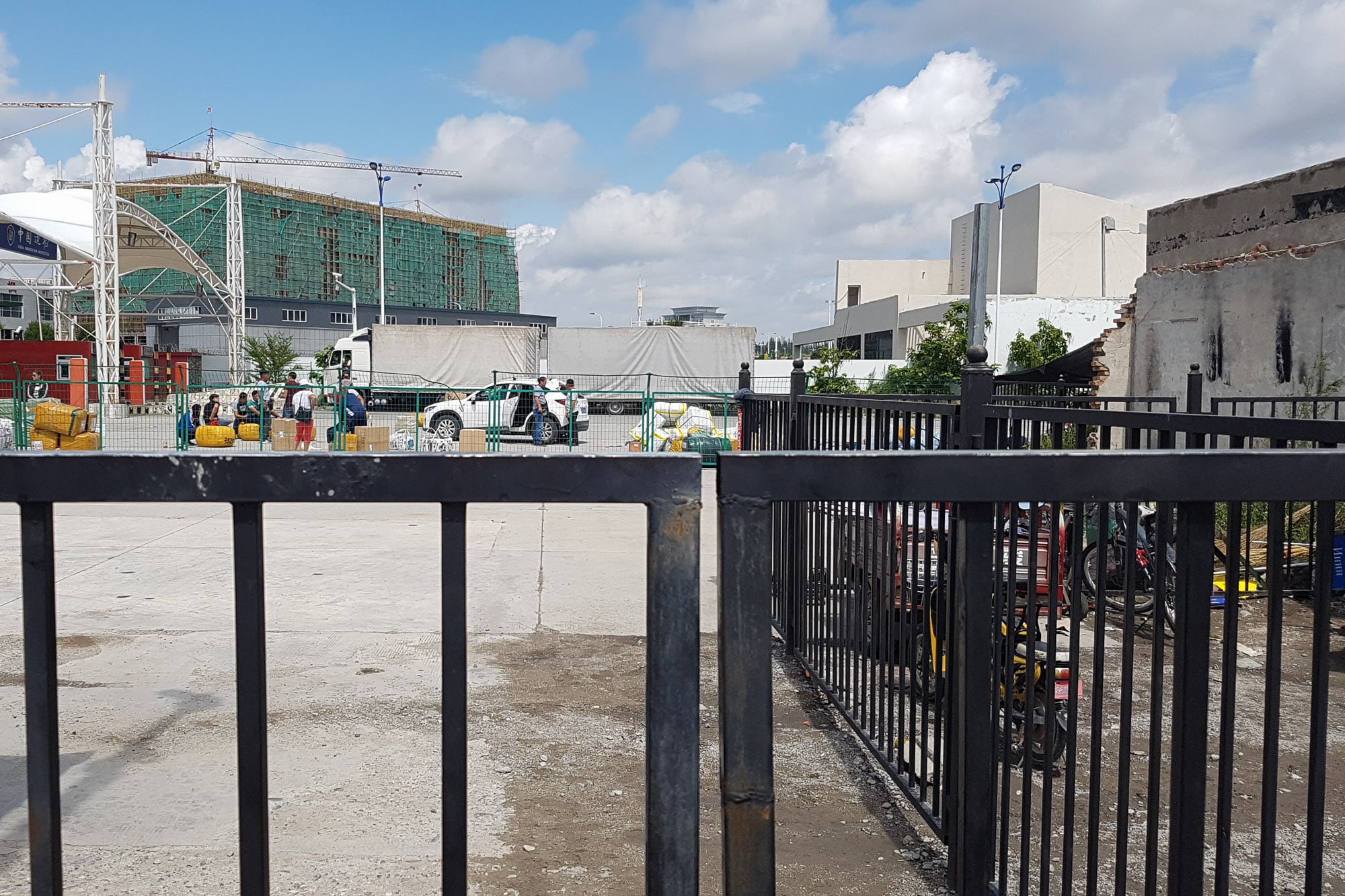 I wasn’t allowed to take any pictures beyond this point, that is until one of the customs inspectors asked for a photo together: 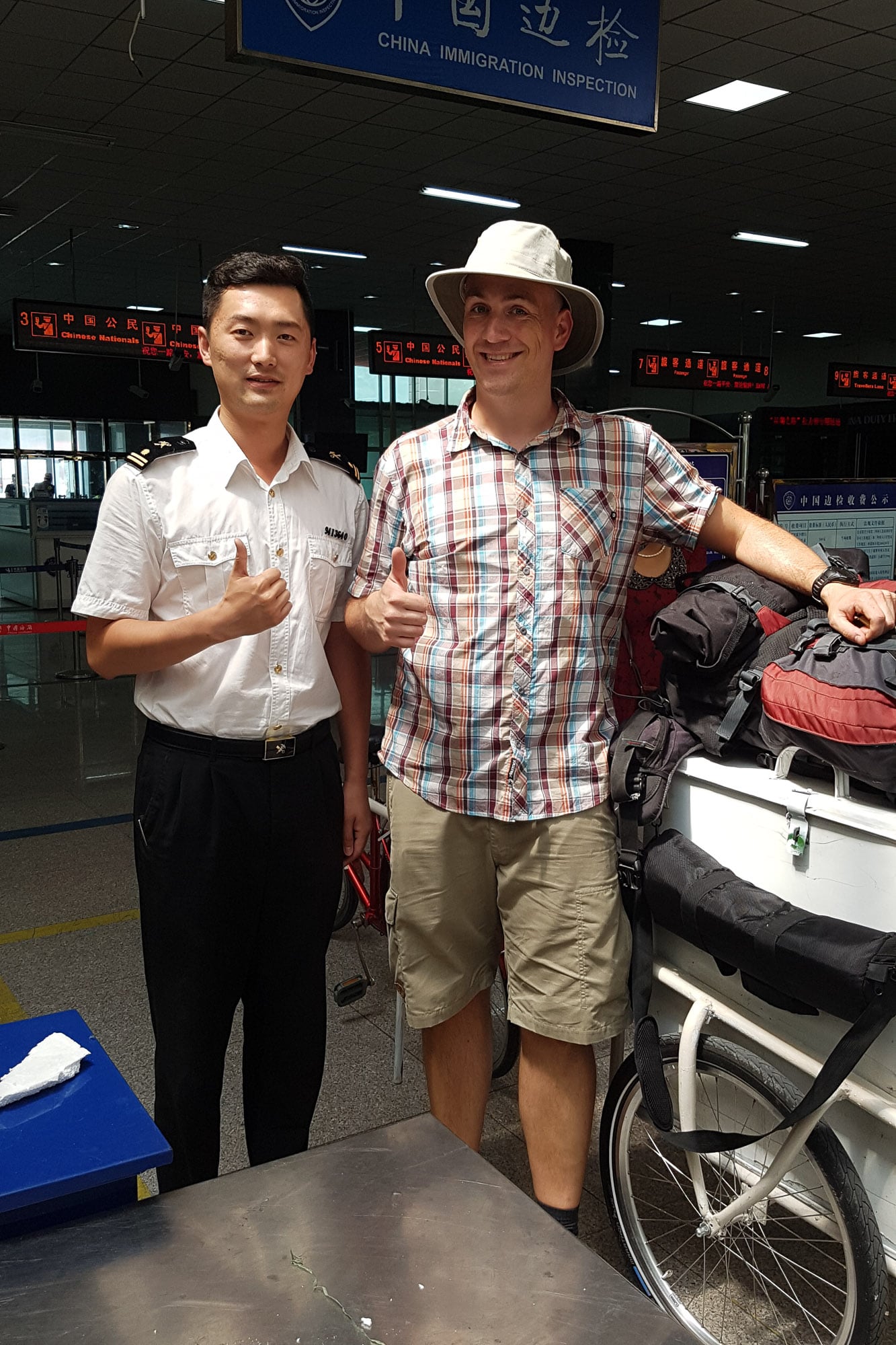 I got a lot of funny looks as I tried to move the Caboose and the little red bike through the border post. When I was through, there was an open square with some people waiting for buses to take them across to the other side. I didn’t wait. I sat down on my bike and rolled in the direction of the last gate.

A soldier stopped me there. We had to wait for his superior, he said. A wasp appeared and inspected my hat and my shirt. I told the soldier that I was scared of wasps and that he please not mind me jumping around a little. I jumped around, trying to get rid of the wasp, and the soldier had a good laugh.

Eventually, his superior came, looked at my passport and waved me through the gate. And then I was through. The road lay open before me, I was neither in China anymore, nor was I in Kazakhstan: 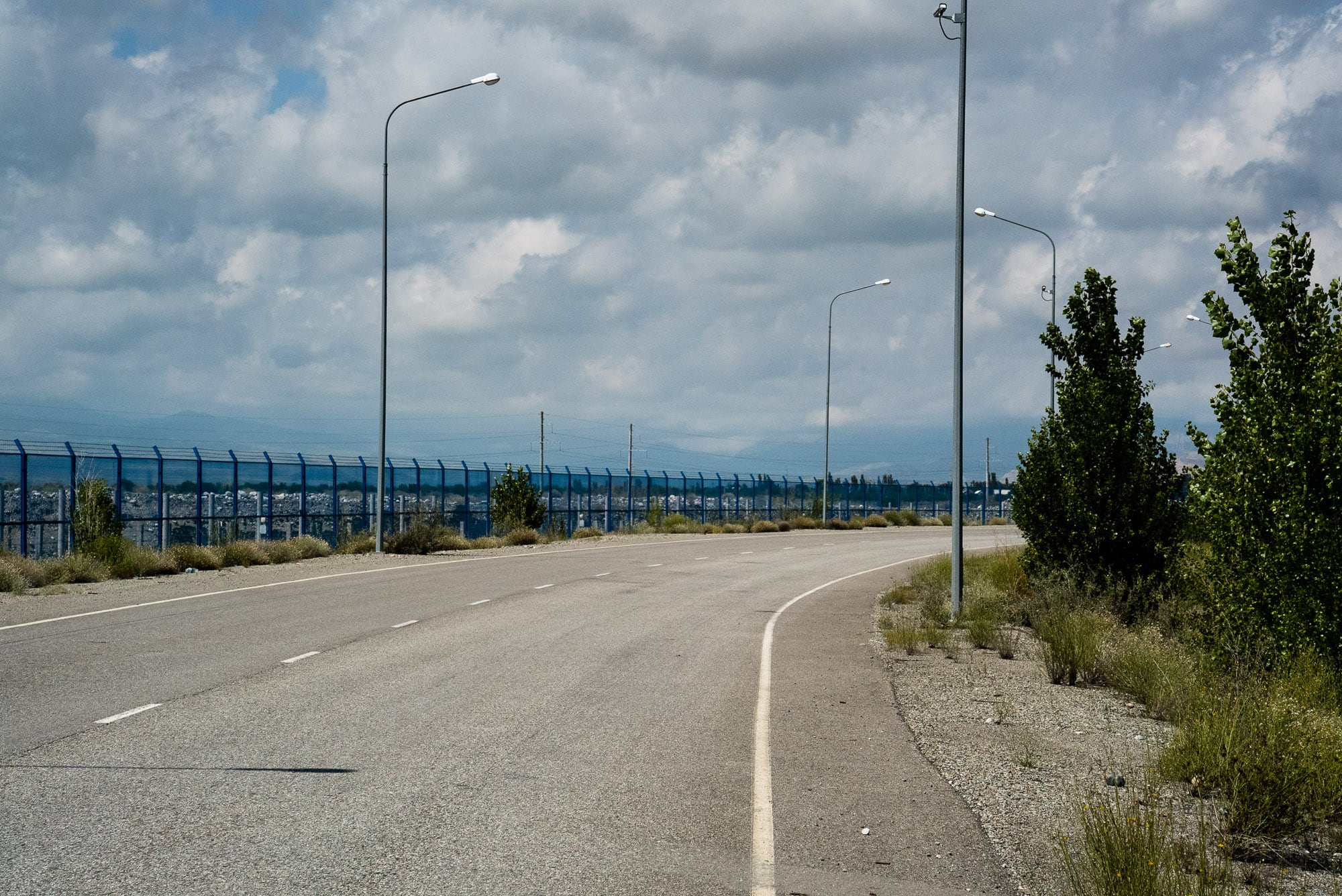 You can see it on the map: the road between the two countries is 7km long. Someone told me this was not because either side was afraid of an invasion, but because they were planning to move the border post to a different location a few kilometers down the way.

Anyway, I started rolling down the road, and I was feeling very excited:

Then it dawned on me: my walk through this country was over. China, with all her sunsets and her sunrises, with all her smiles and with my friends who lived there, China was behind me for good. I probably wouldn’t be walking through China for a long time.

I was hungover, and I was sad.

When I arrived at the other side of the border, a guard in a huge hat stopped me. He laughed when he saw me on my little red bicycle and said he wanted to try it: 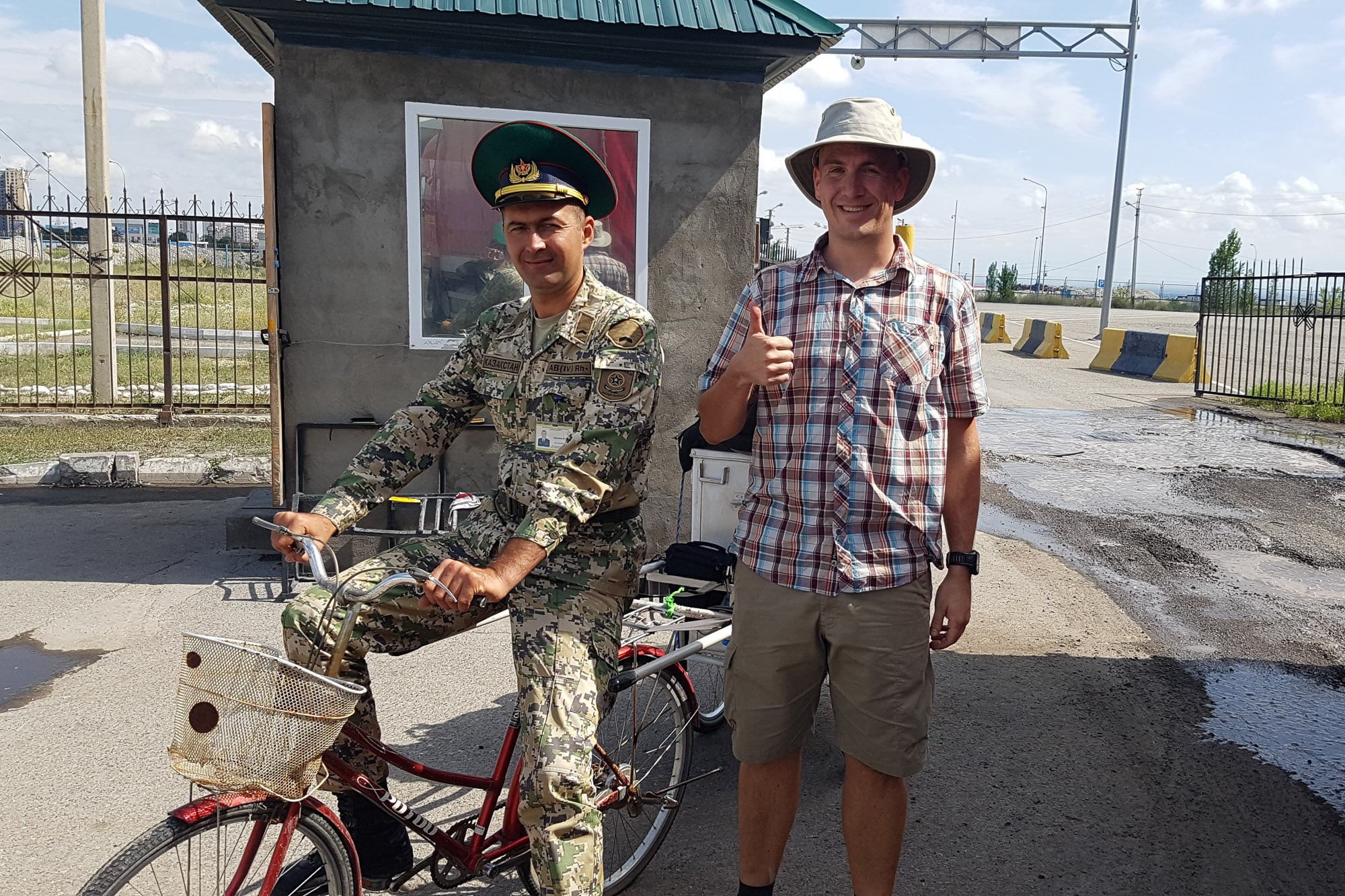 I left it right there with him.

Then I pulled the Caboose into the customs area. I got some funny looks, and a lot of people in big hats started asking me questions. Then a gentleman called Marad appeared and told me he was going to buy me lunch: 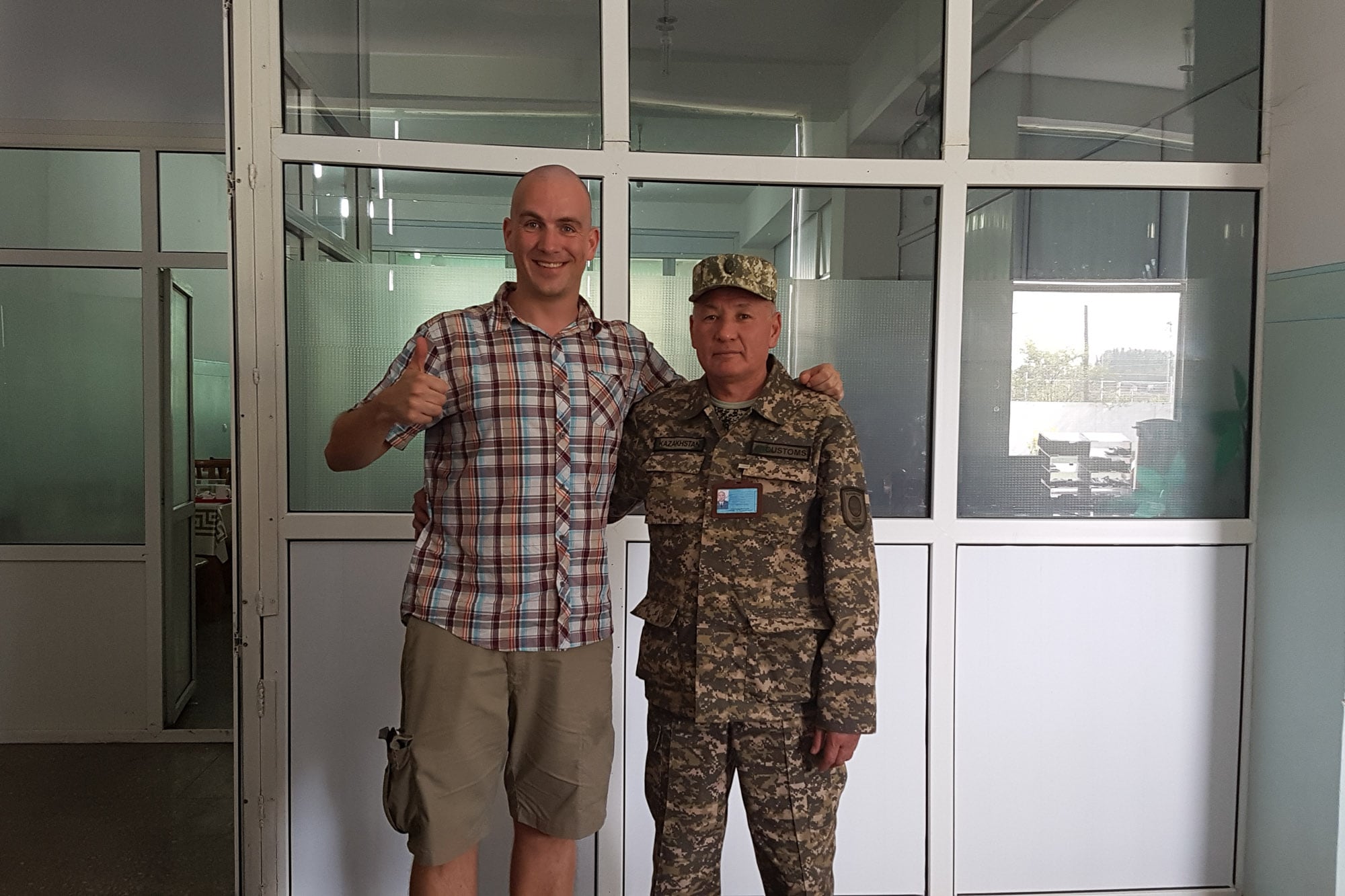 And that he did.

I left the border post feeling confused. Sadness was there. Fear as well. And there was joy that Marad had been so nice to me, and that I had finally taken that first step.

Kazakhstan lay before me: 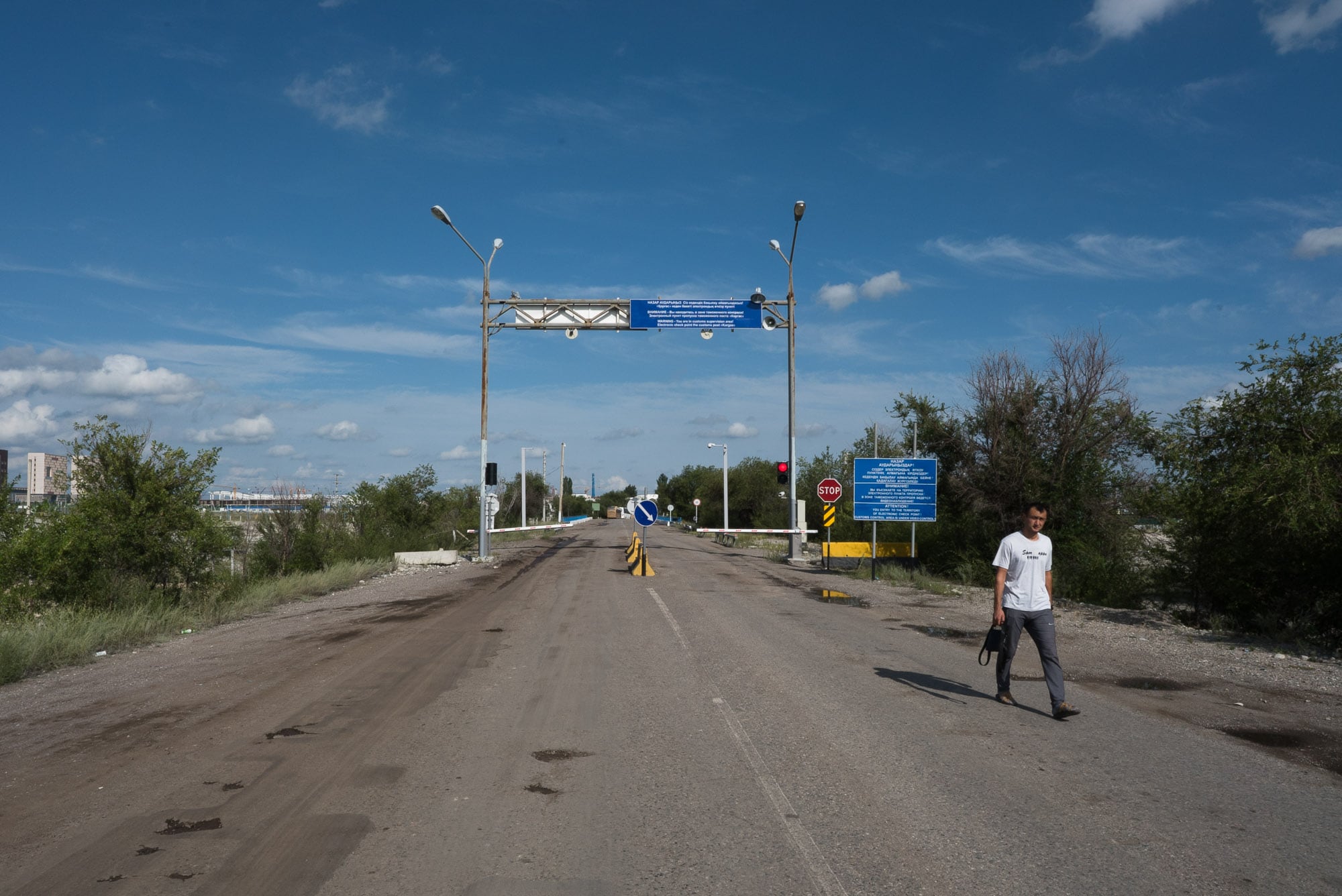 I walked for a little while, listening to the sound of my footsteps on the road.

And then I turned back and took one last look at China in the distance: 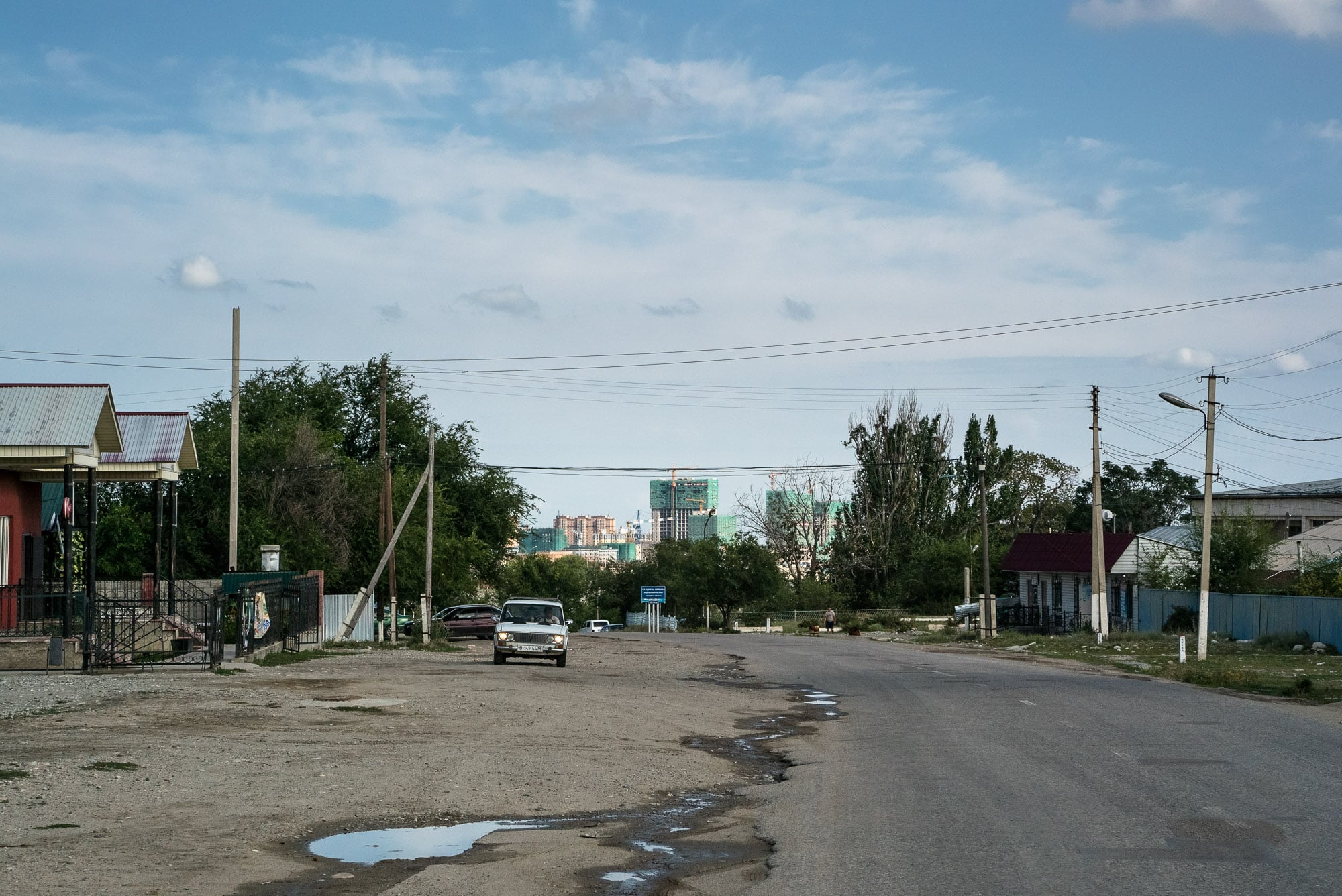