Yesterday had been a disaster, but little did we know that today was going to be even worse.

Robozwerg‘s eyes were a mess: a funny pink color, all swollen up, and constantly watering.

The poor dude couldn’t even blink.

So we figured he best take some antibiotics and apply an ointment, and then put on every kind of protection that we could find: 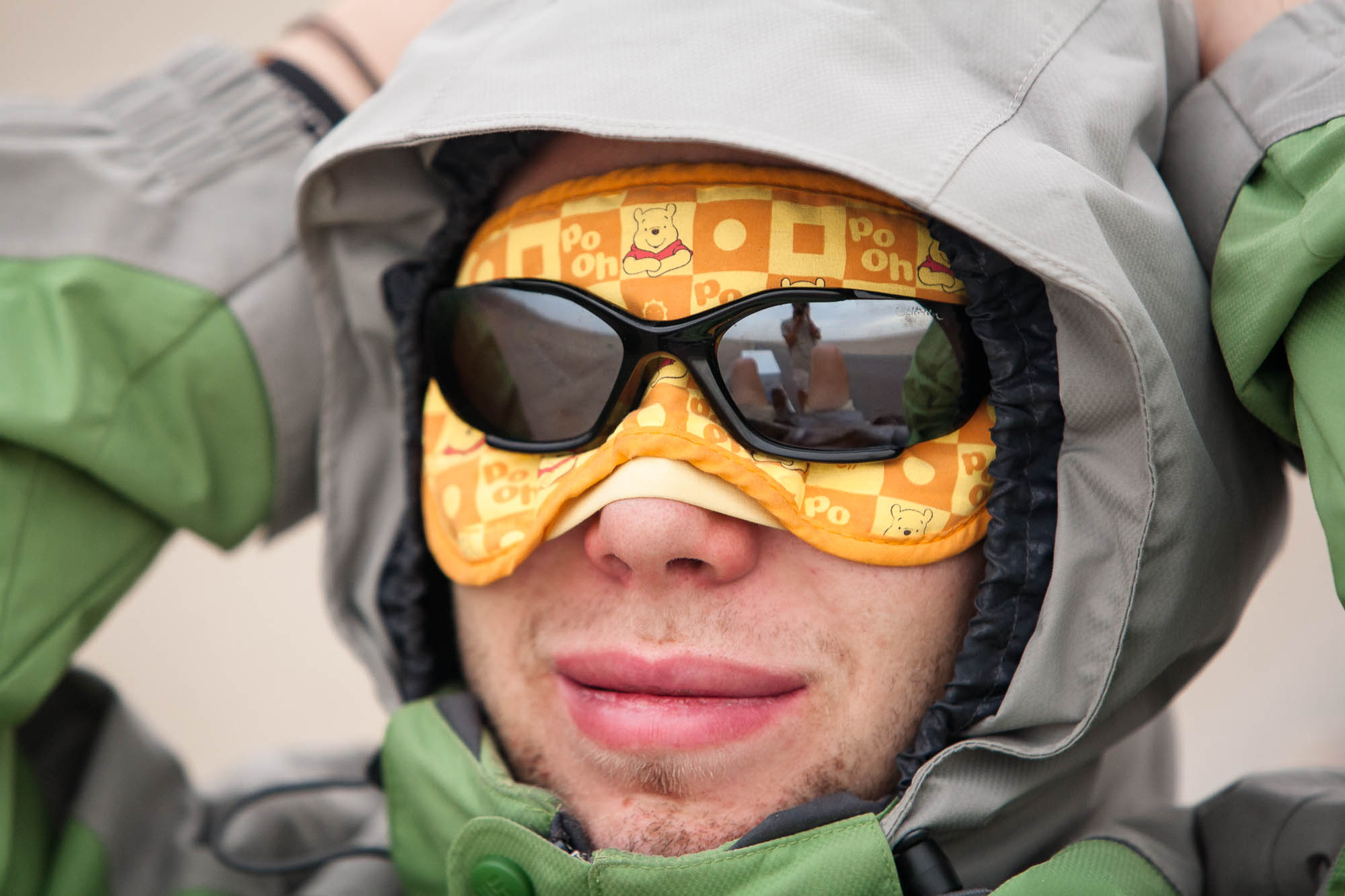 Then it started to rain.

I had Robozwerg lay down on the Cucumber, put the sun shade in his hands, and then I was going to push the whole thing as far as I could go: 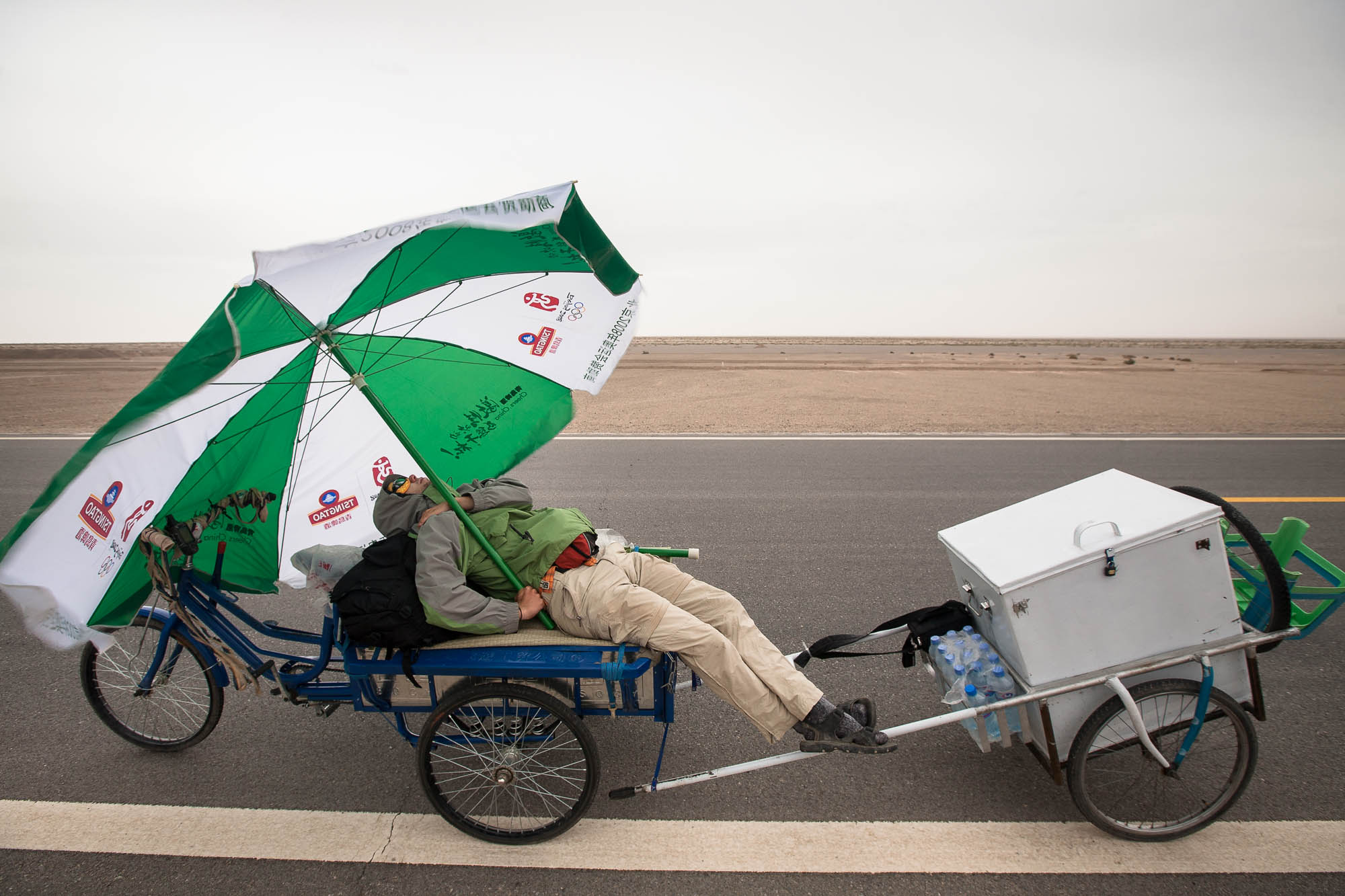 …against the wind and the rain, hauling the bike with my blind little brother through the Gobi desert, as far as I could go was only about 4 hours – and 9 kilometers.

Then I gave up.

We devised a new plan: 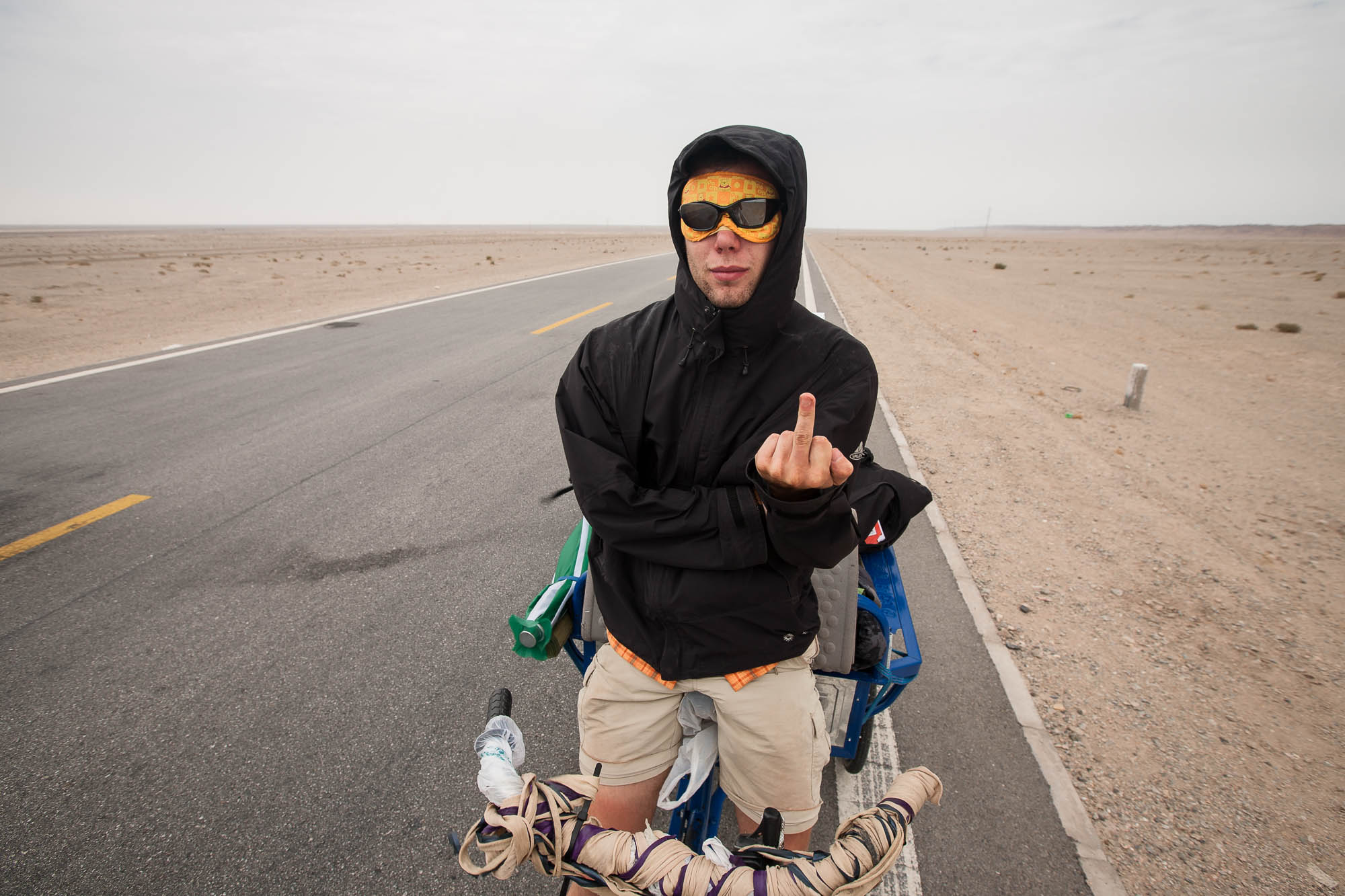 Little dude was going to sit on the bike and pedal. And here’s where it gets tricky: he was supposed to stay blindfolded the whole time, so I had to walk next to the bike, hold the handlebars and take care of the steering.

…and so we went, Robozwerg not knowing where the hell we were going, and me not knowing how far we would get.

We passed some old ruins that seemed like they belonged to the Great Wall fortifications in this area: 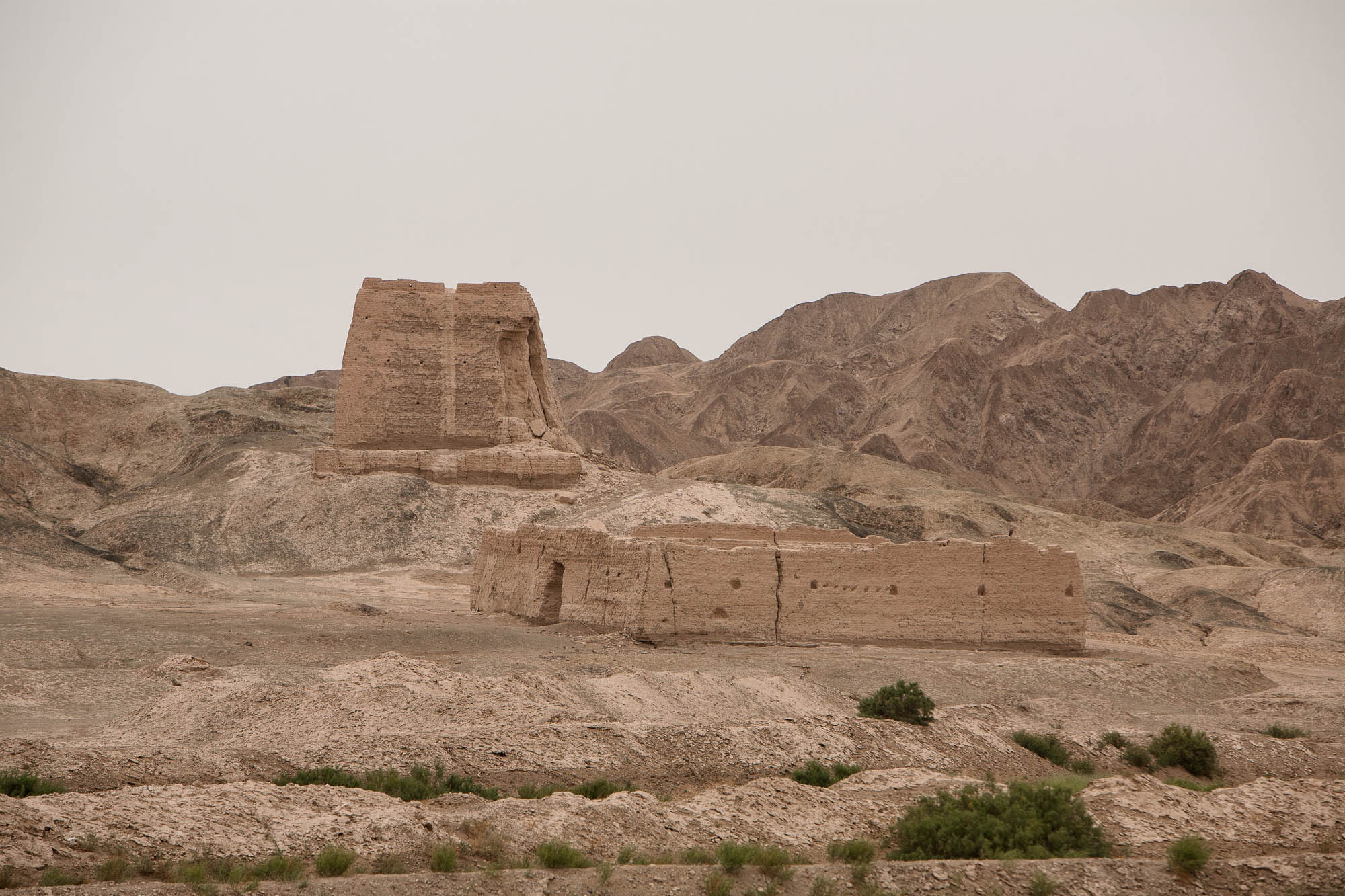 My brother didn’t see them.

The mountains in the south were very pretty at times: 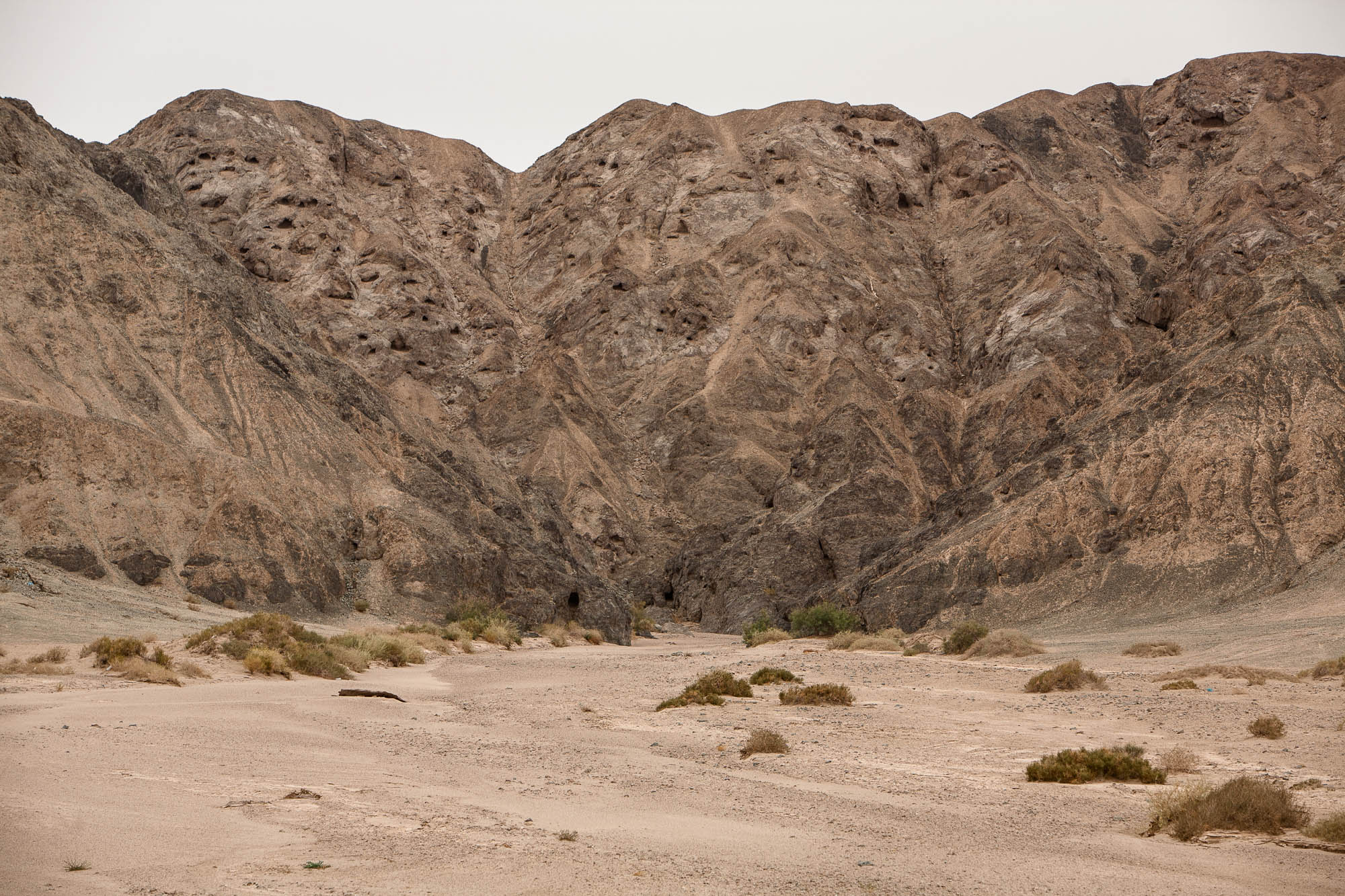 …but he didn’t notice that either. 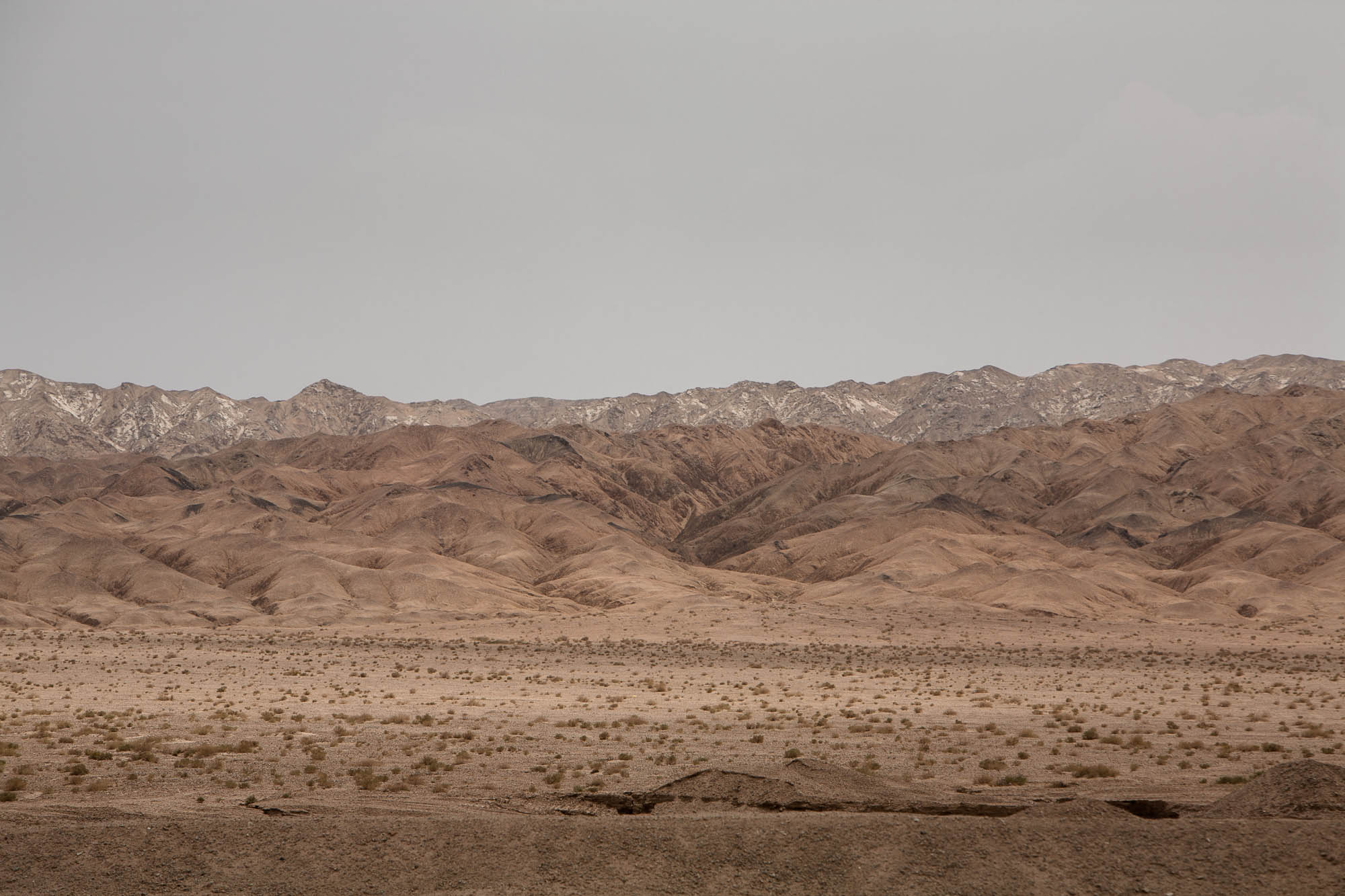 Then both our brakes on the Cucumber failed. 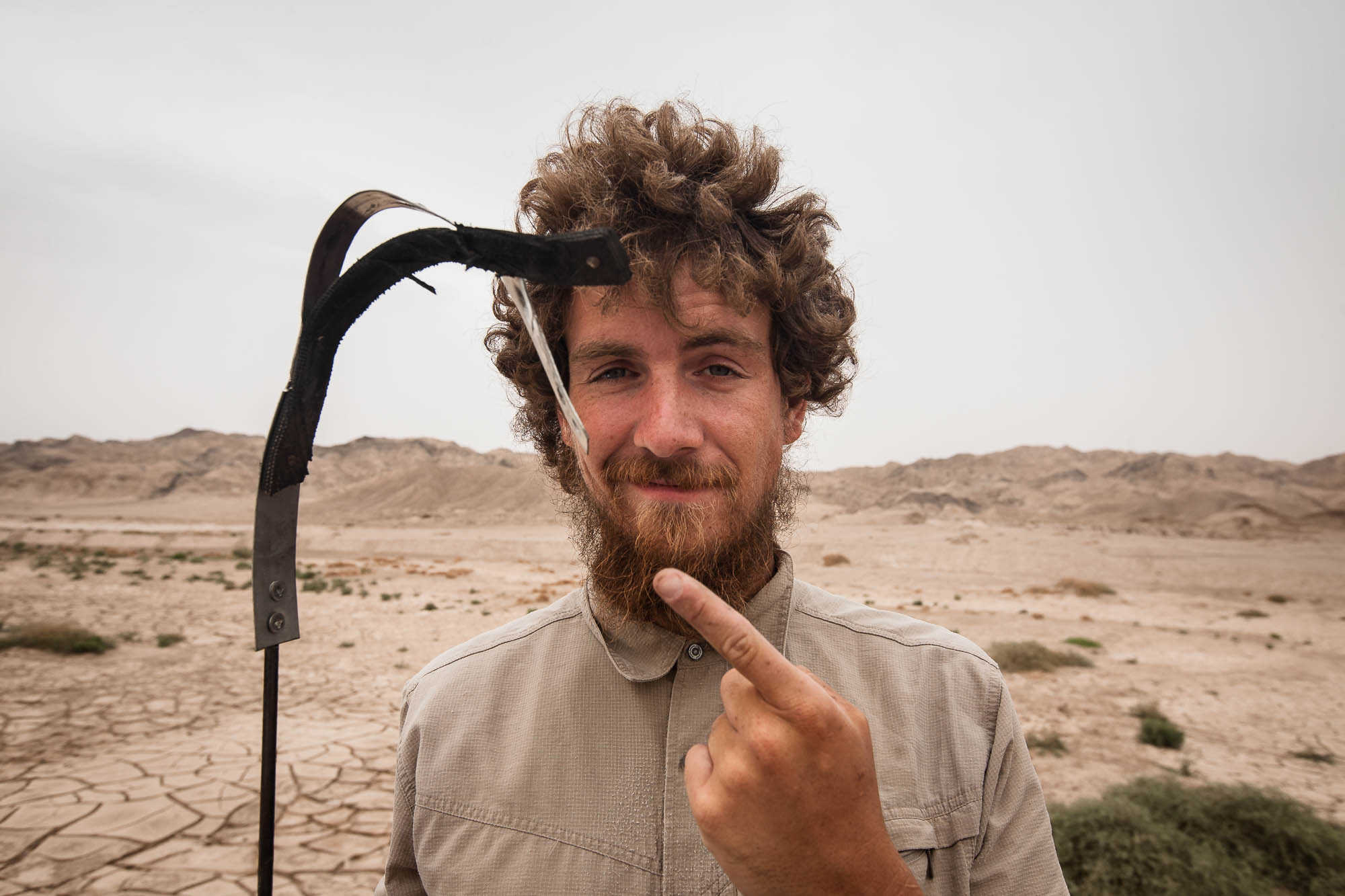 So now we had a new problem – the tailwinds and the downhill force: 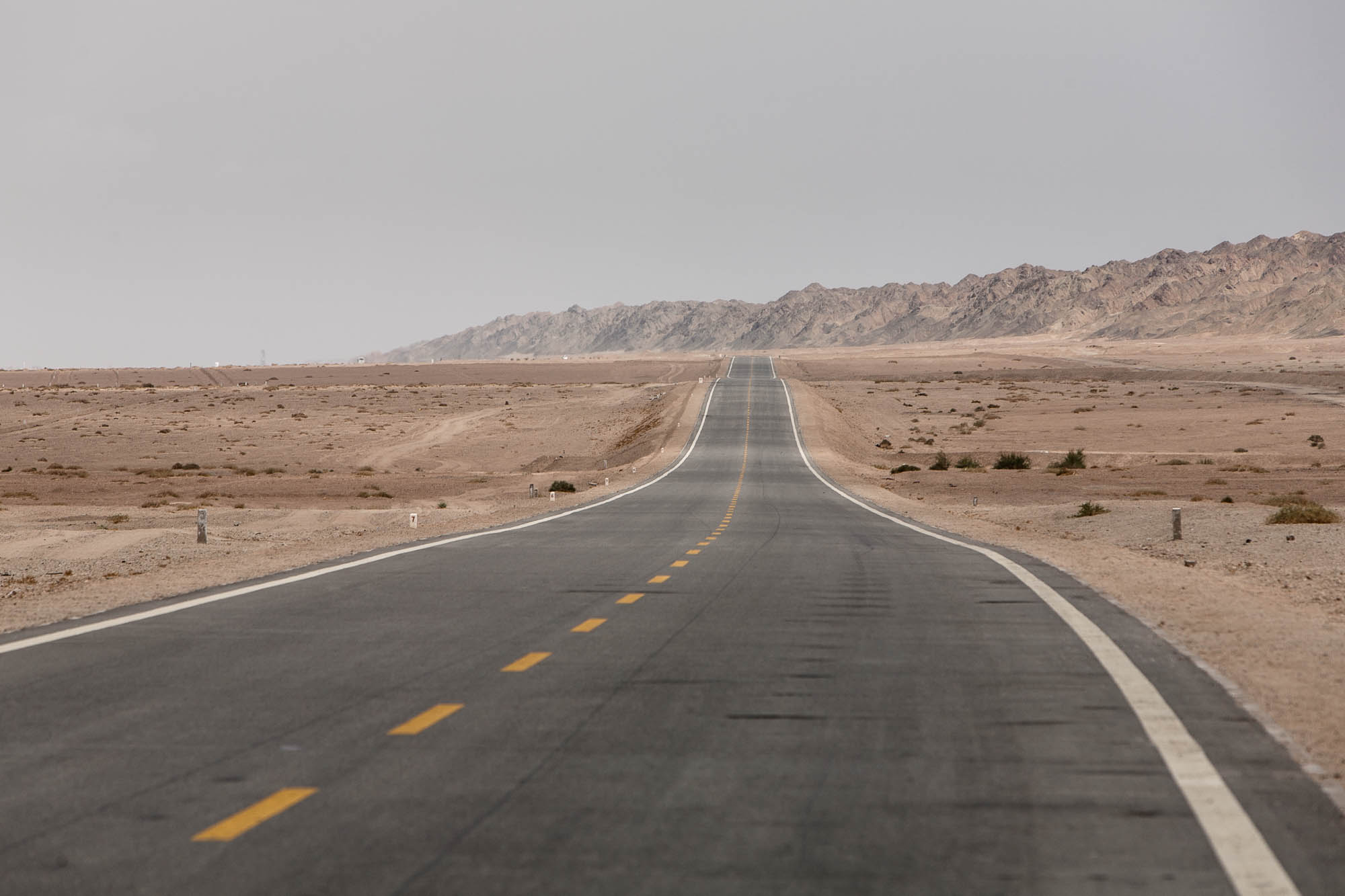 With the brakes gone, I just couldn’t slow down anymore.

I wasn’t going to leave my blind Robozwerg alone on that bike either.

Suddenly I found myself in a very uncomfortable situation: the Cucumber with the Caboose and my brother were all moving downhill, and they were getting faster.

So I did what I had never wanted to do.

I jumped on the bike.

And I rode downhill.

Sometimes the winds and the downhill gradient were so strong that we reached speeds of up to 35km/h.

The Gobi desert passed by in a rush – my brother behind me – and the brakes were gone.

“Are we going really fast?” he would ask me sometimes.

I’d just say yes, and pray that we didn’t crash.

And so we rode.

There wasn’t that much downhill though. We even passed by a place where there were a few houses and some people living in them: 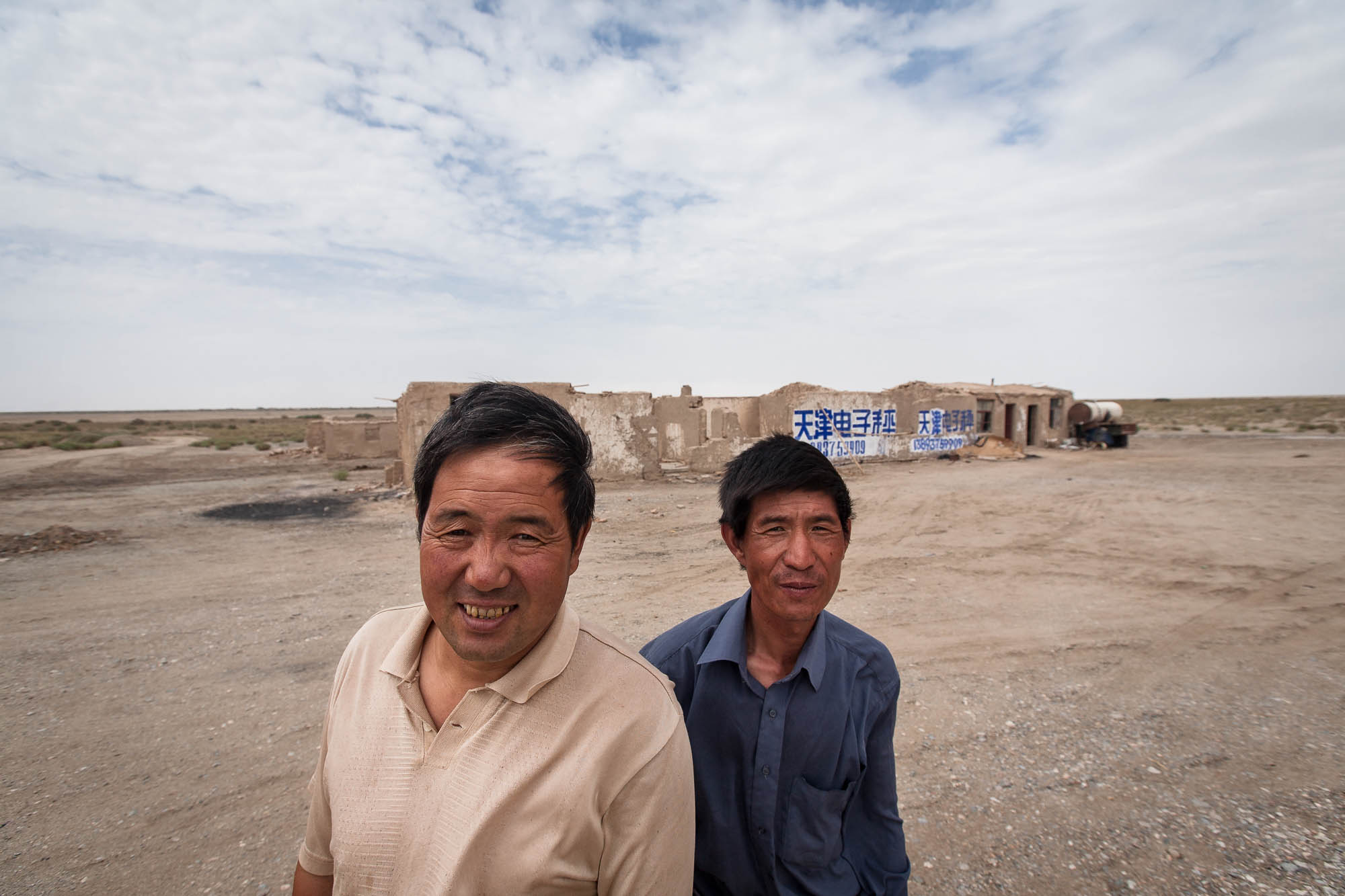 This place had been a mine a few decades ago, then it had been abandoned, and now they were planning to make it into a new one.

We rested in the shade of a tower of the Great Wall: 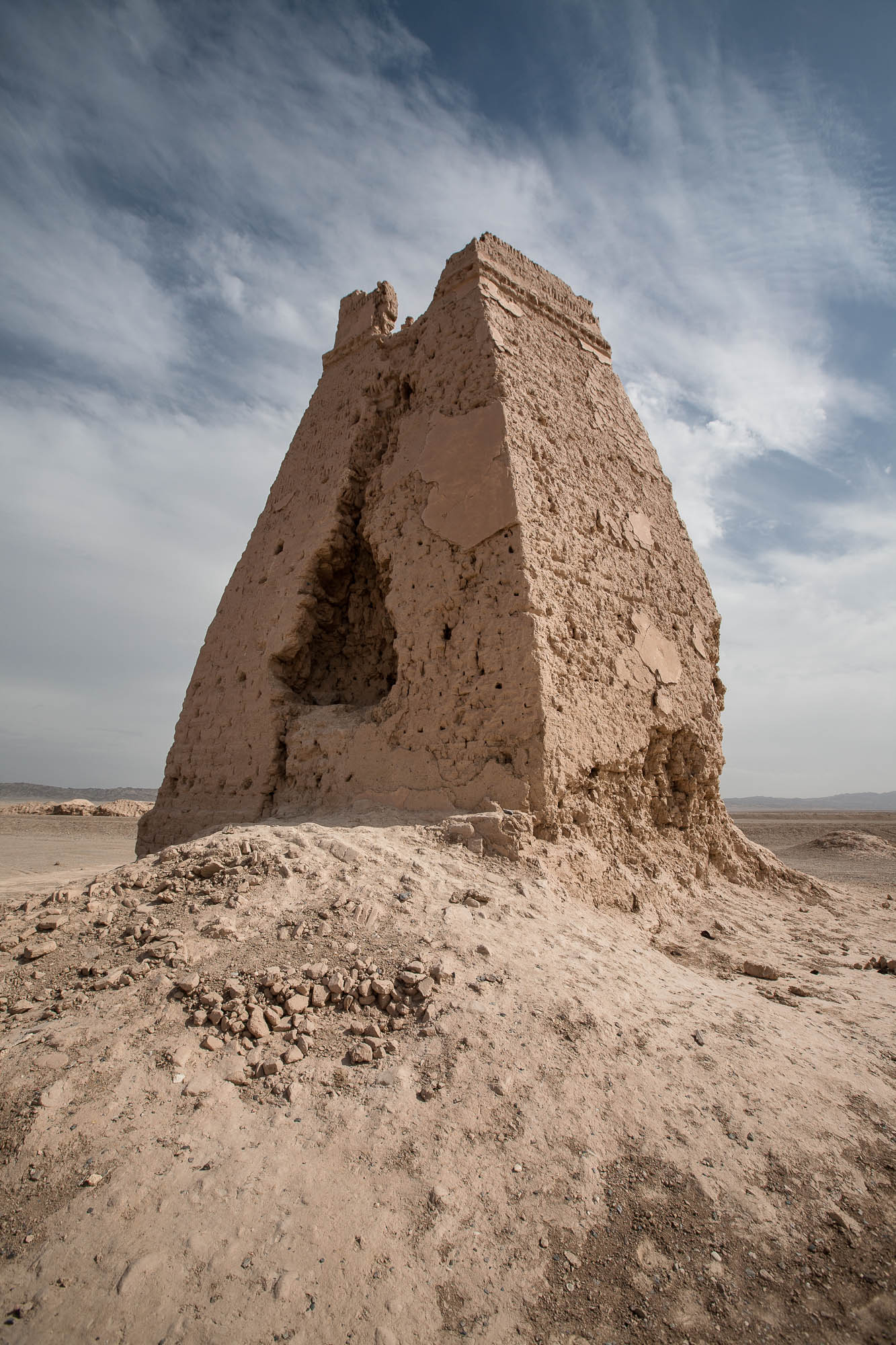 Then we moved on for a couple of hours, until the sun was about to go to sleep behind the vast nothingness of the Gobi desert: 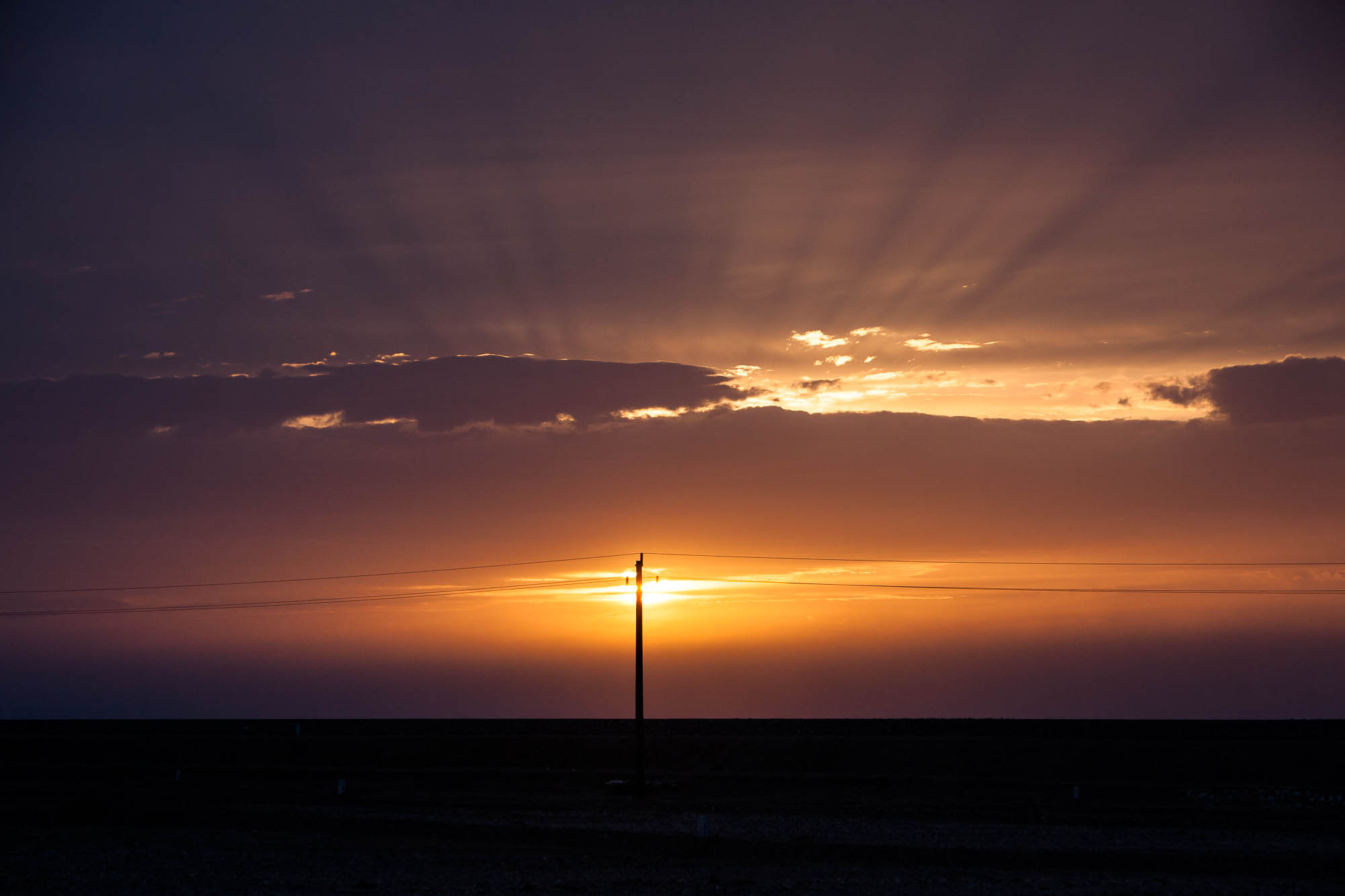 Again, with the sandstorm going on out there, we opted for the one-man tent: 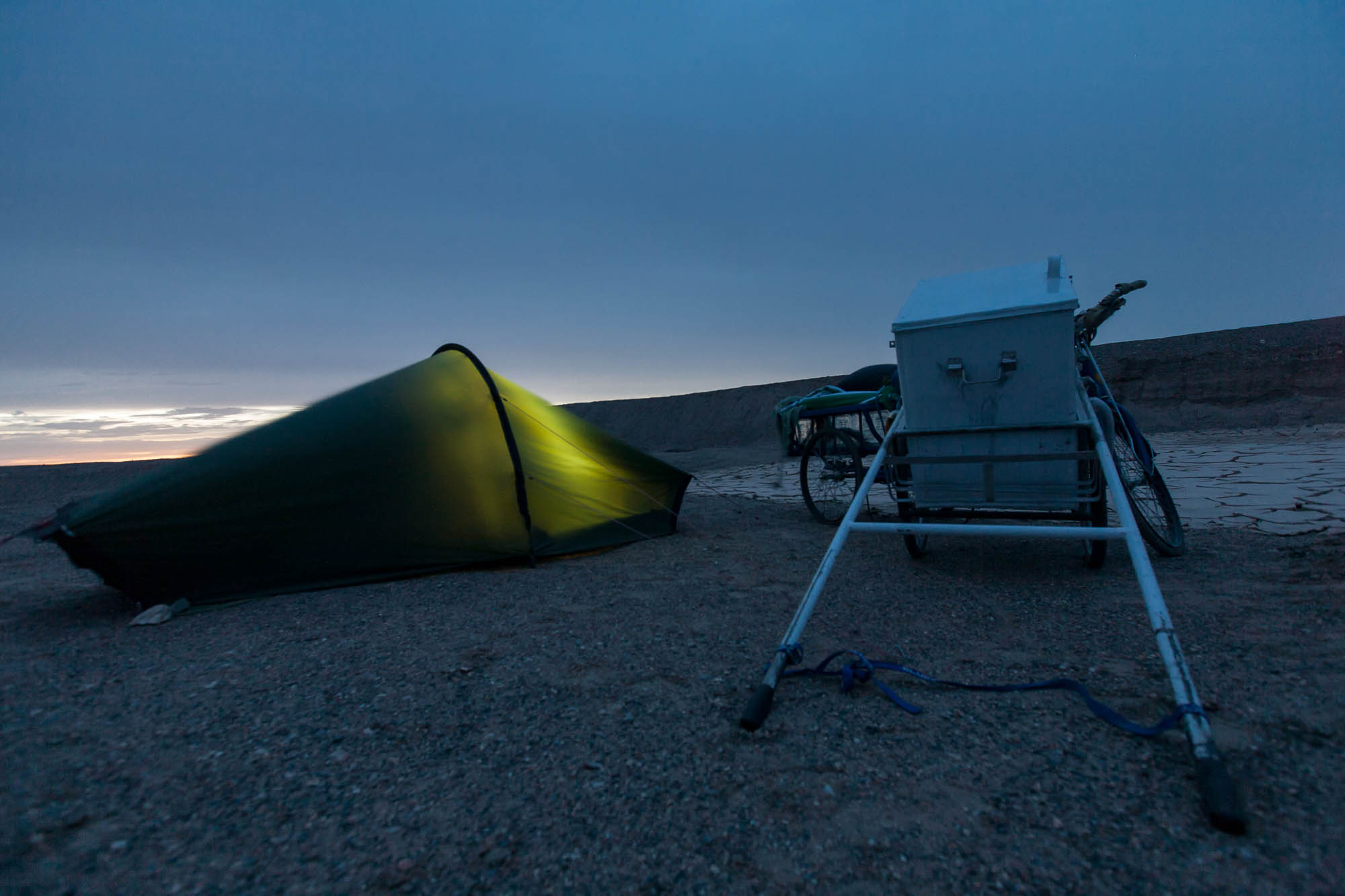 Feeling that I had just cheated myself out of walking about 10 kilometers, I wasn’t in the mood for jokes.

Robozwerg’s eyes seemed to get better though.