This post is about a 14km walk from Jingxing to Tianchang. I see a lot of polluted water and coal dust. In the end I get a German capri sun.

Back on G307, I saw something unexpected: Beautiful. No idea what kind of bird this was, but I thought: majestic wings over the gates of hell.

Now why would I think that? Remember I used the phrase “nature bleeding away” yesterday?

Well, I found some of her blood today: 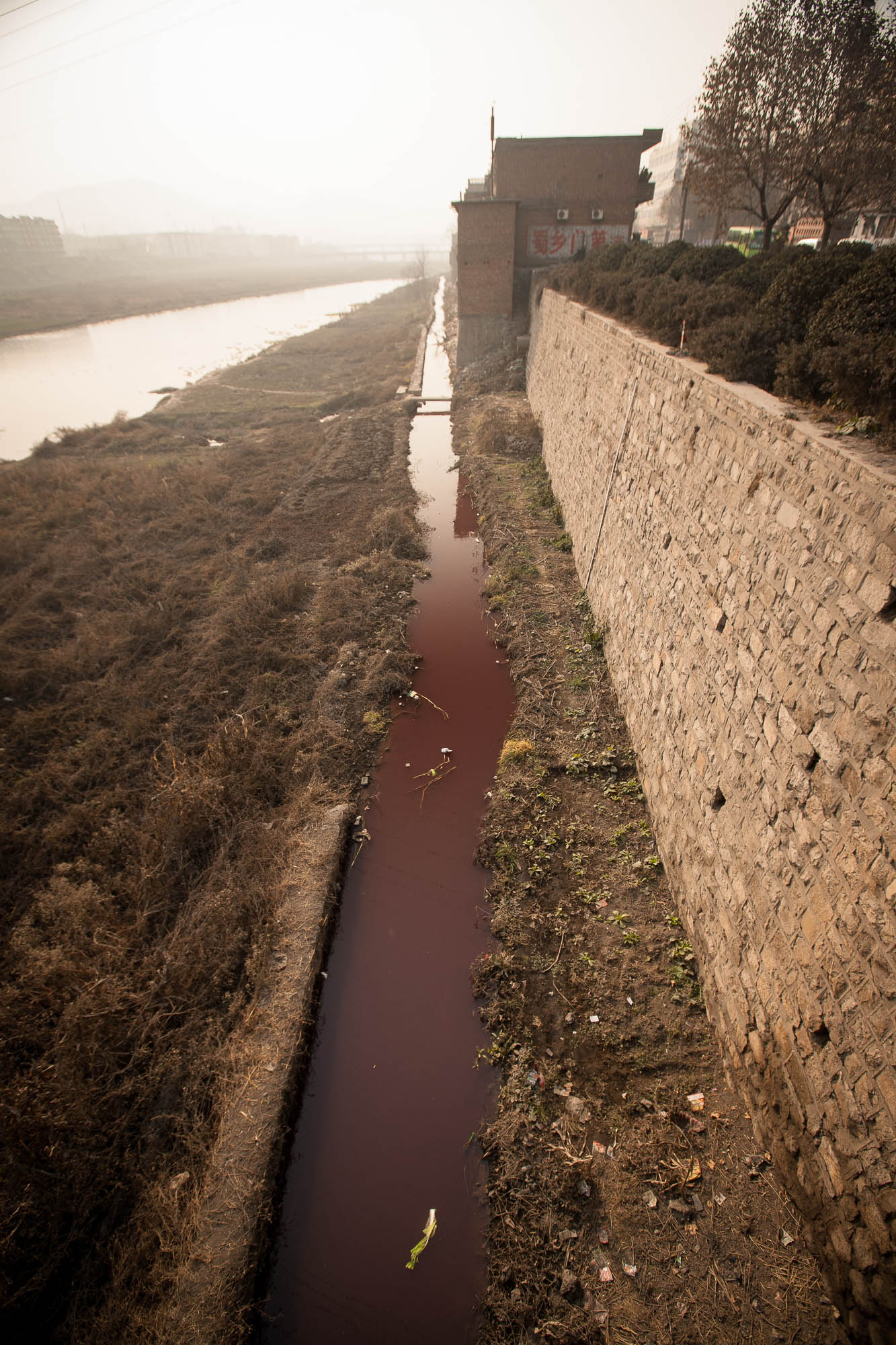 A deep red rivulet, barely streaming at all… – this could have been a tourist attraction if it had only been natural.

But of course it wasn’t.

And neither was this one: 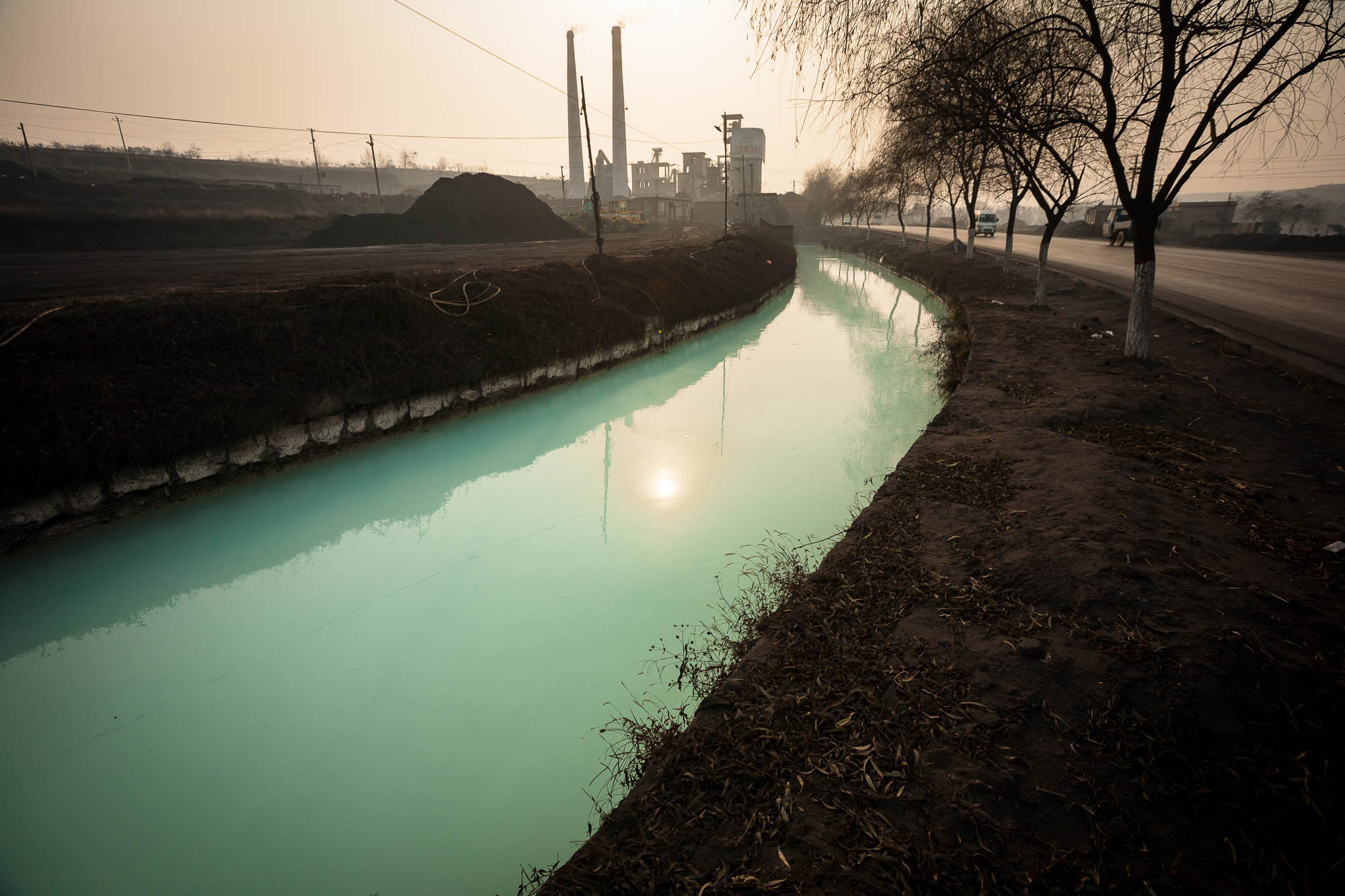 It looked like some weird sort of mint-milkshake to me. Or mouthwash. Who knows?

I didn’t try it anyway. What can I say? The wall is oozing and sweating death.

This is what I’ve been looking at most of the day: But then it occurred to me: this is not entirely a Chinese problem.

I think the industrial revolution is just hungry, that’s what it is. Don’t forget: early nineteenth century England saw something that was probably even more of a ravaging beast than this one.

Photographs like this make more sense in that context: 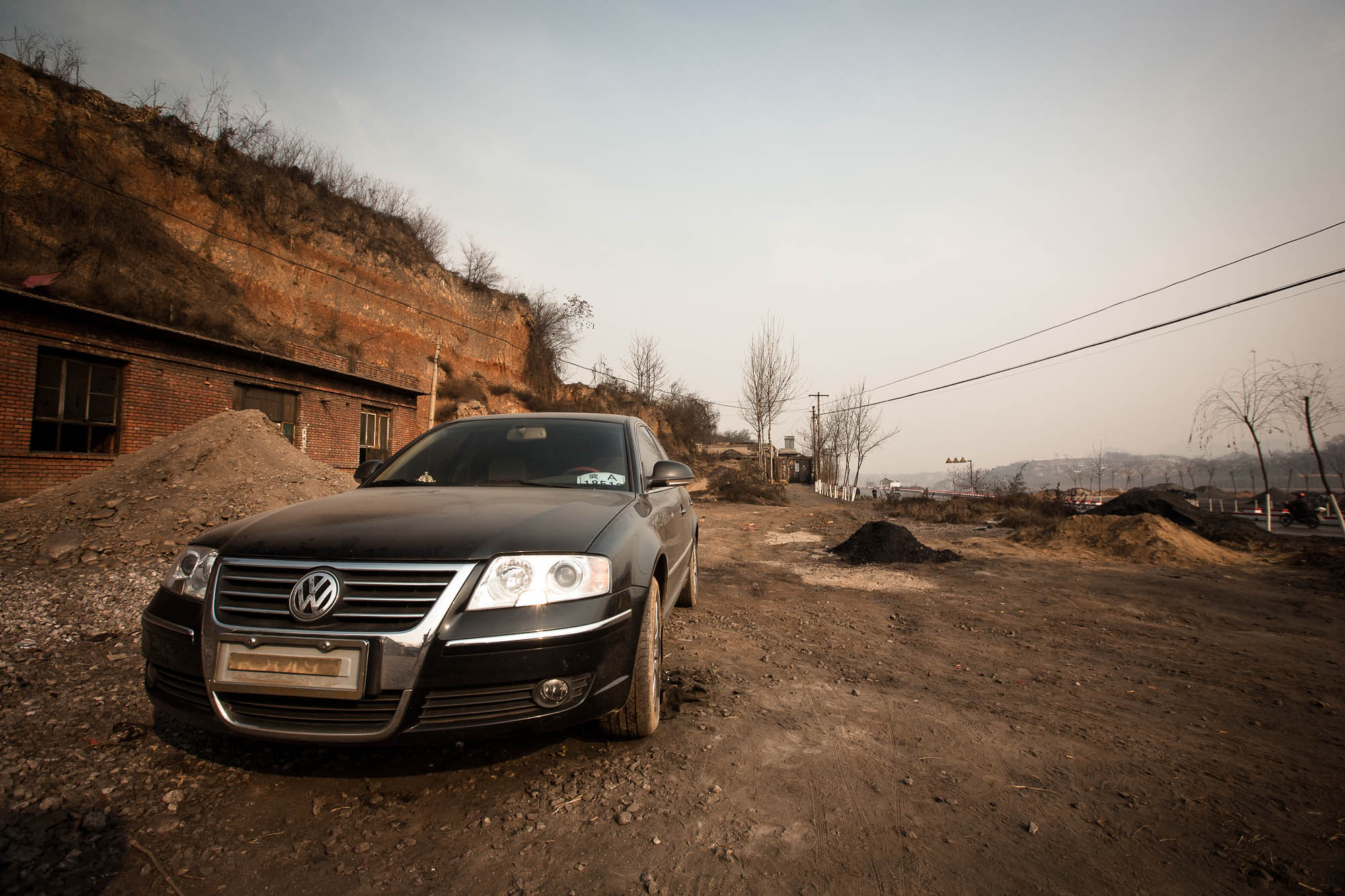 I call cars like this BBML – big black misplaced limousine. You’ll find them everywhere – once you start looking. They stand around in the dustiest of places. Because that’s where the money for them comes from.

Of course, not everybody can be a boss. Not everyone can own an BBML, and not everyone gets a large share of the pie: They’re grinding charcoal there I think. 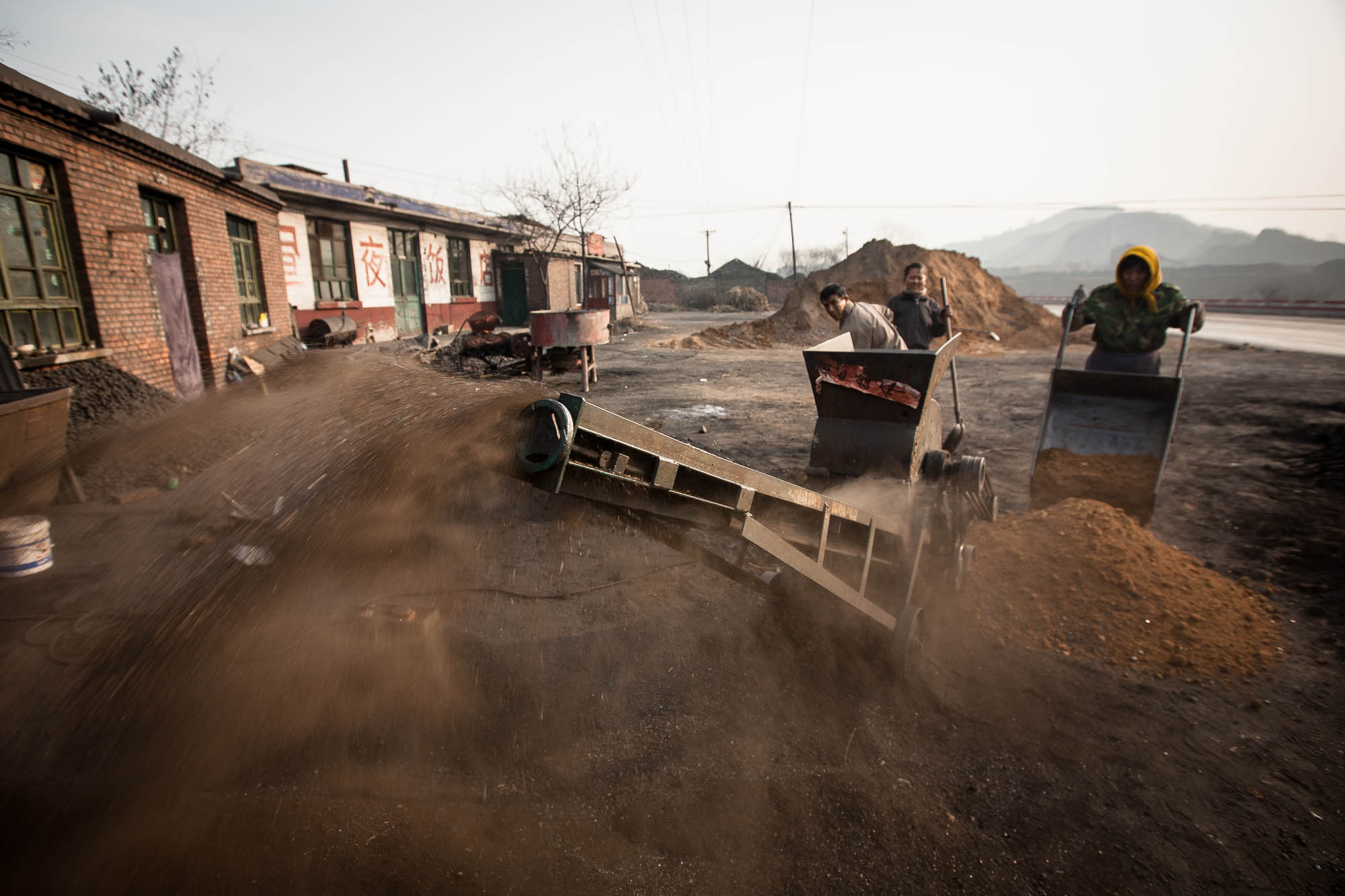 I found these people nice to talk to, even though they wouldn’t talk much. They were just too busy and it was too noisy anyway.

Others just hid in their homes when I walked by: 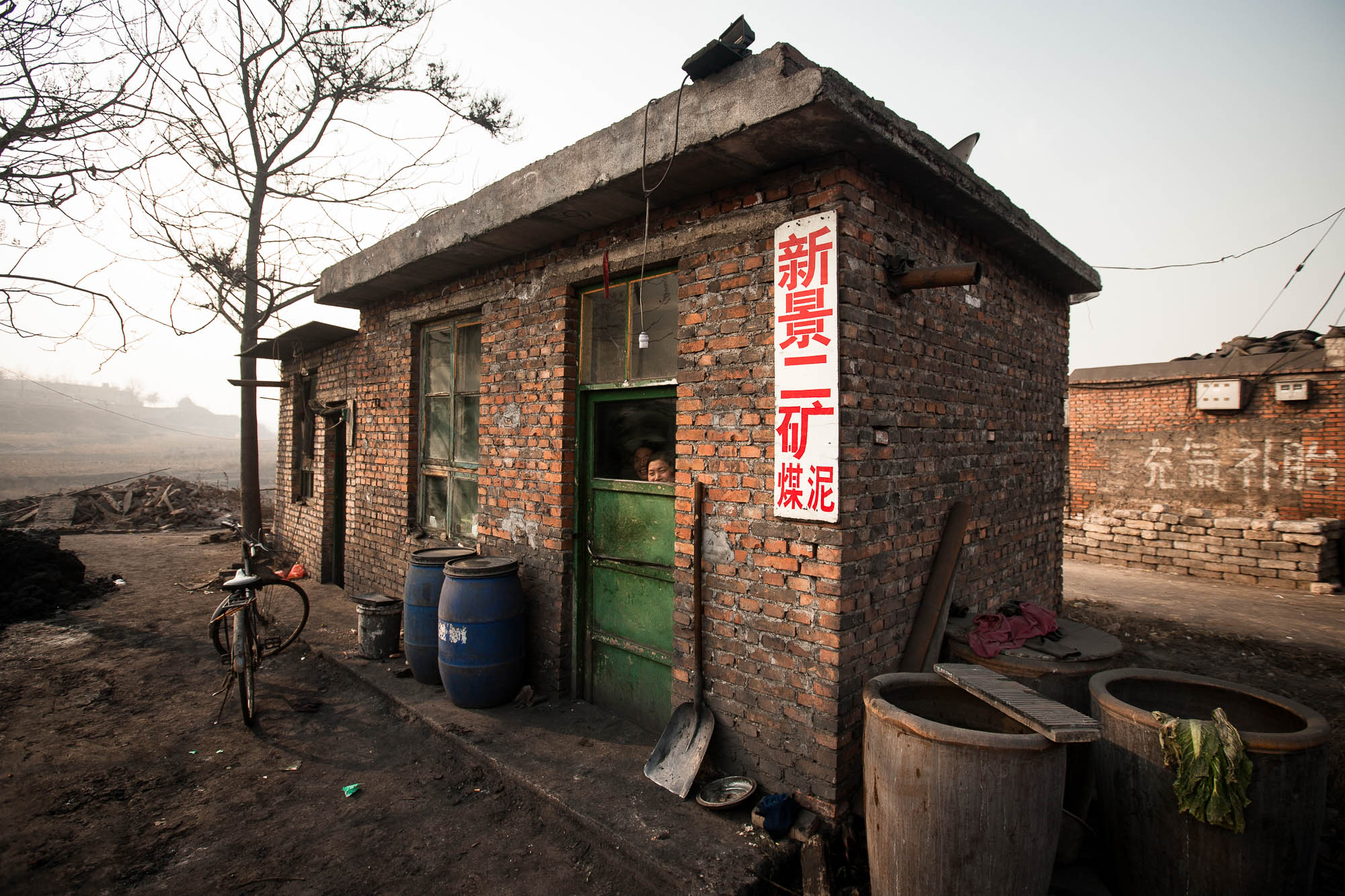 I noticed that there seemed to be a certain amount of xenophobia around here. Folks were not unfriendly at all. But virtually every home and every junkyard outside of the villages had one or two mean dogs watching over the place. And we’re talking mean as in malicious, and dogs as in mongrels.

Taking a leak off the road could get quite unpleasant that way.

Well, despite all the destruction I had seen today on my walk from Jingxing to Tianchang, and despite all the ashes and the dust that had colored my hands black, I found a bit of peace eventually: 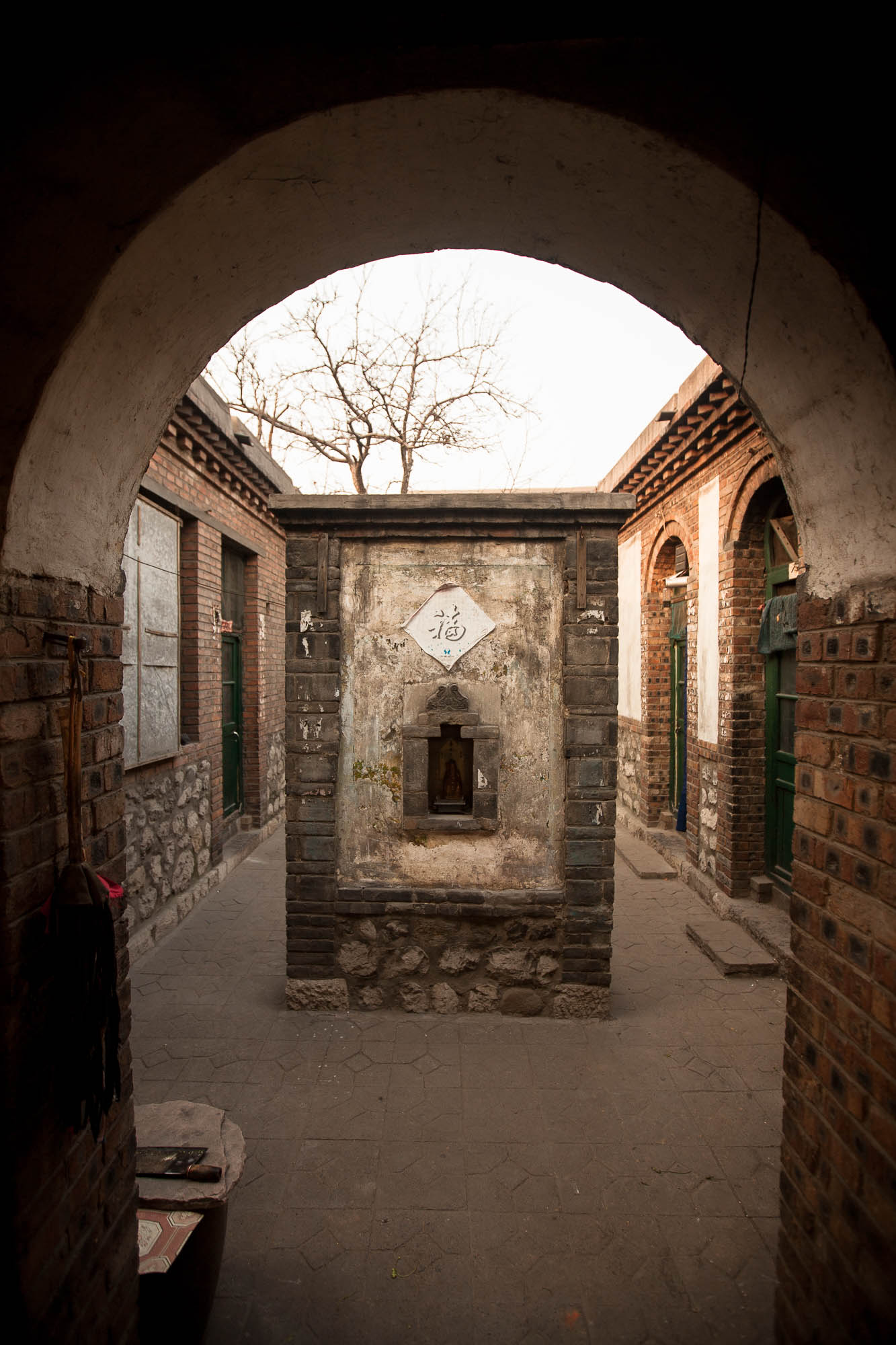 This is unfortunately not my hotel. But it’s someone’s home, and it’s clean and nice and taken care of, with the little Buddha statue watching over it all.

Then it got even better: Why was it in German? I didn’t know and I didn’t care.

Imagine you were a shopkeeper in a tiny store in a little village on a dusty road in northern China. You have somehow gotten your hands on a bunch of German Capri-Sonne, and I come in the door, your new German friend. You would be looking at something like this: Good luck to the bird.