This post is about a 9km walk within Zhengding. I visit the Journey To The West Palace, the Tianning Temple and the Longxing Temple.

When I woke up this morning I thought I could hear a military conflict going on outside: gunshots, detonations, laughter… 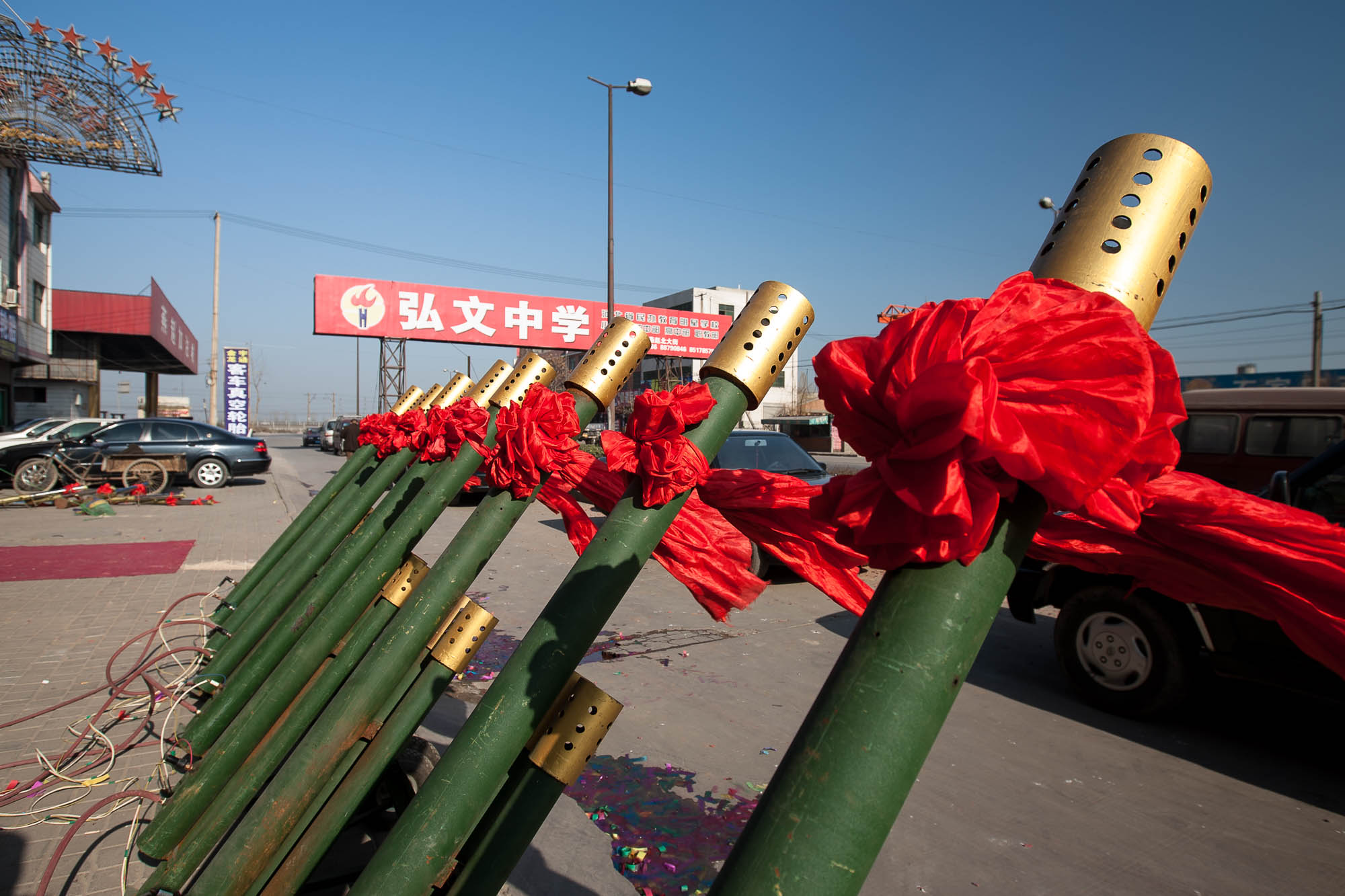 You might have already guessed it: Someone was throwing a wedding party in the hotel I was staying at. The Chinese are the kings of fireworks, no kidding. I decided to get out of bed.

People had been telling me that there was a lot to see in Zhengding. This place apparently used to be one of the most important towns in Northern China for thousands of years. My expectations were high, I was excited.

The first site I walked by wasn’t historical at all though: 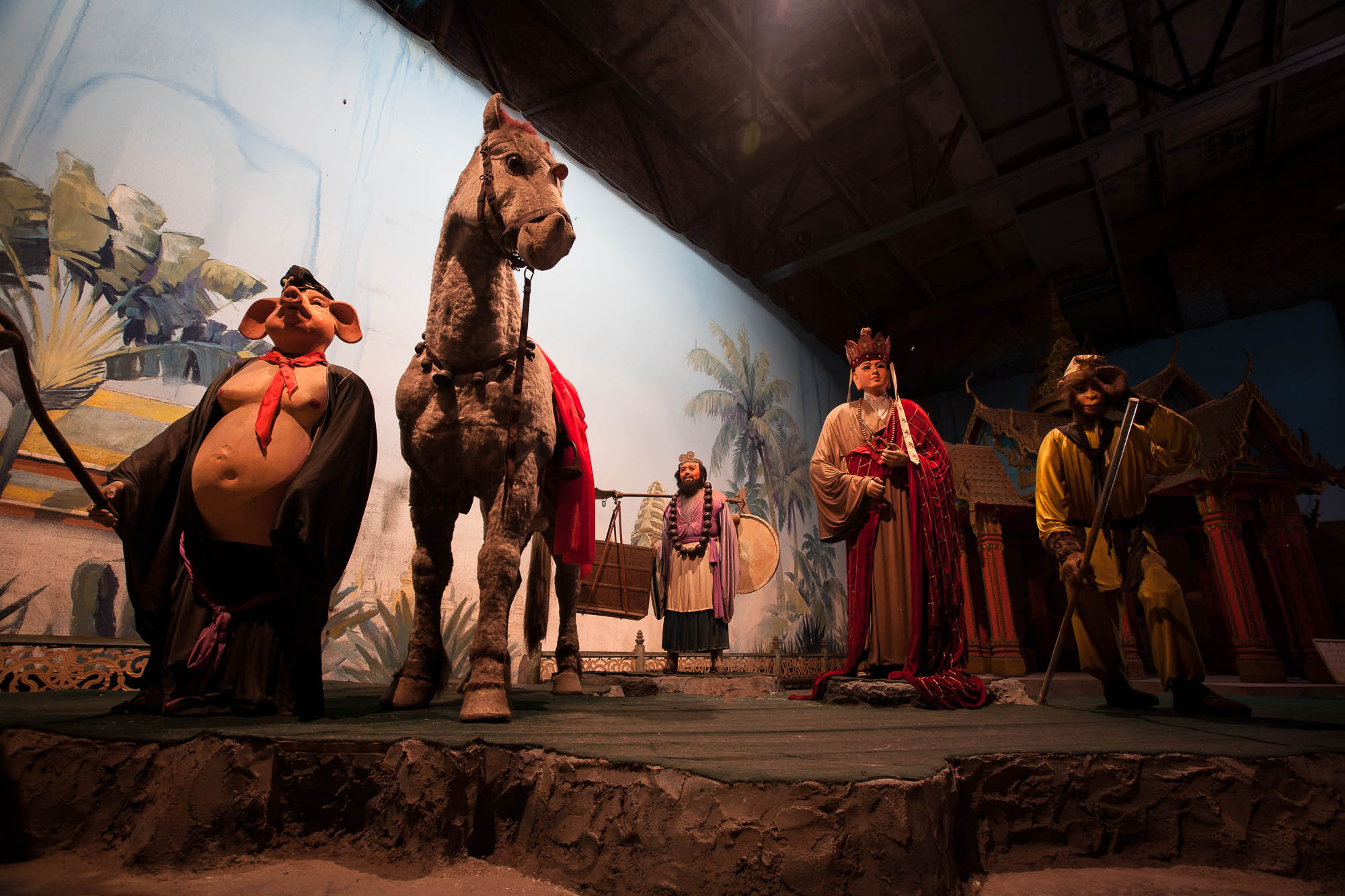 The Journey To The West Palace 西游记宫 is a modern place dedicated to a Chinese Classic: the 16th century novel Journey to the West. It’s about a monk traveling to India to recover some Buddhist scriptures. Among his mates are a pig and a monkey. Or rather, they are spirits that look like a pig and a monkey.

I went into this “palace” because I thought it was going to be historical, and because I figured that I was also on a journey to the west. But I found it uninteresting if not to say boring.

There was a sign outside that I liked though: 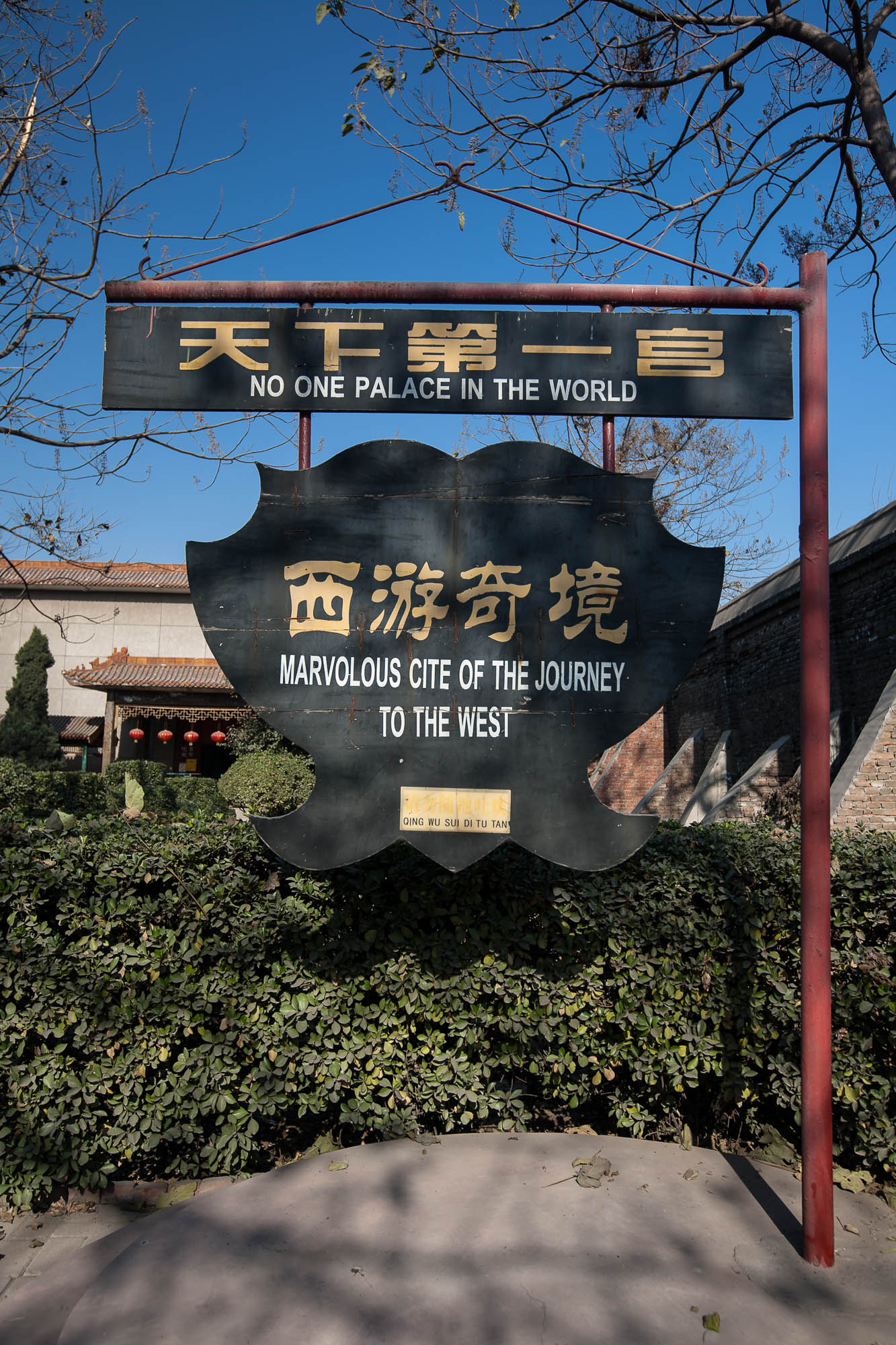 Actually, it consists of three signs, two of which have been translated into English. I added the third translation for you:

(from top to bottom)

“NO ONE PALACE IN THE WORLD”

“MARVOLOUS CITE OF THE JOURNEY TO THE WEST”

“PLEASE DON’T SPIT ON THE FLOOR”

The next site I came along wasn’t as funny, but it sure was historical: 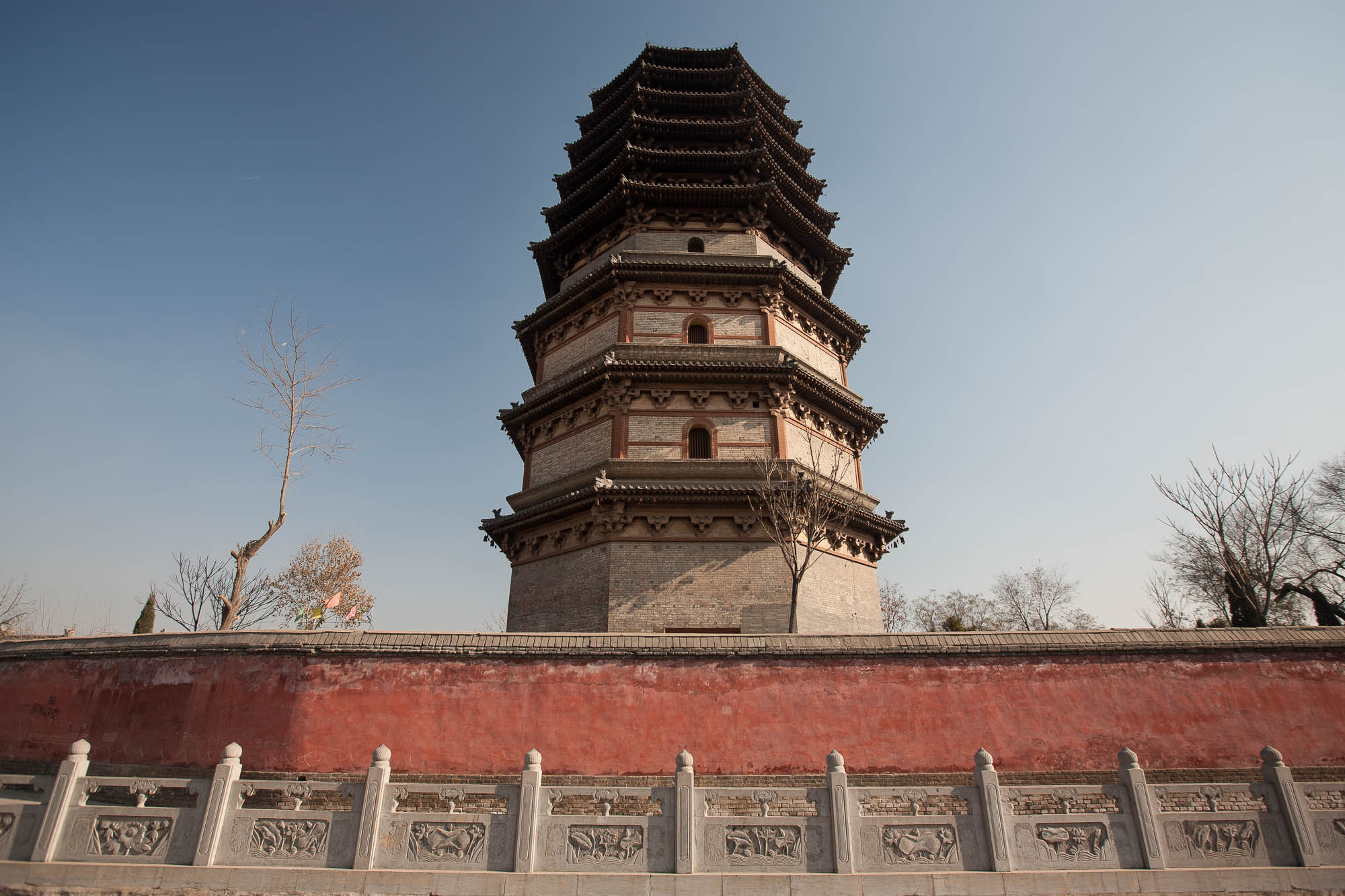 Tianning Temple 天宁寺 is a wooden pagoda that originally dates back to the Tang Dynasty (唐 618-907). It has been restored and renovated several times, though. The last time that happened was apparently in the 1980s, so it had a quite fresh feel to it.

I got a flashlight and squeezed myself into the staircase to make my way up: 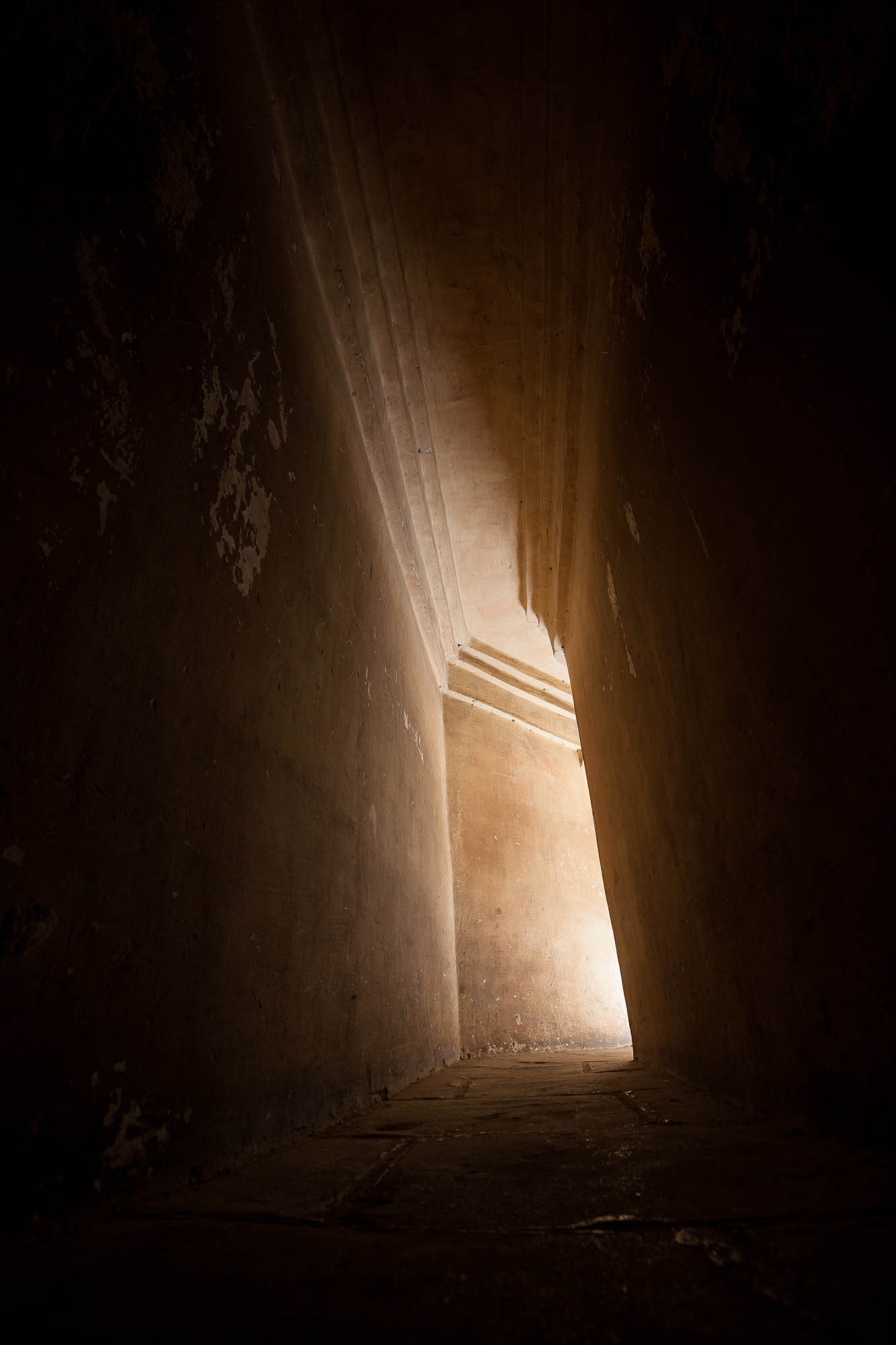 There was nothing at the top but a bucket and a mop, and even they weren’t there.

The most important historical site Zhengding had to offer was very close by: Longxing Temple 隆兴寺 is a large Buddhist temple that is even older than Tianning Temple. It was originally constructed during the Sui dynasty (隋 581-618): 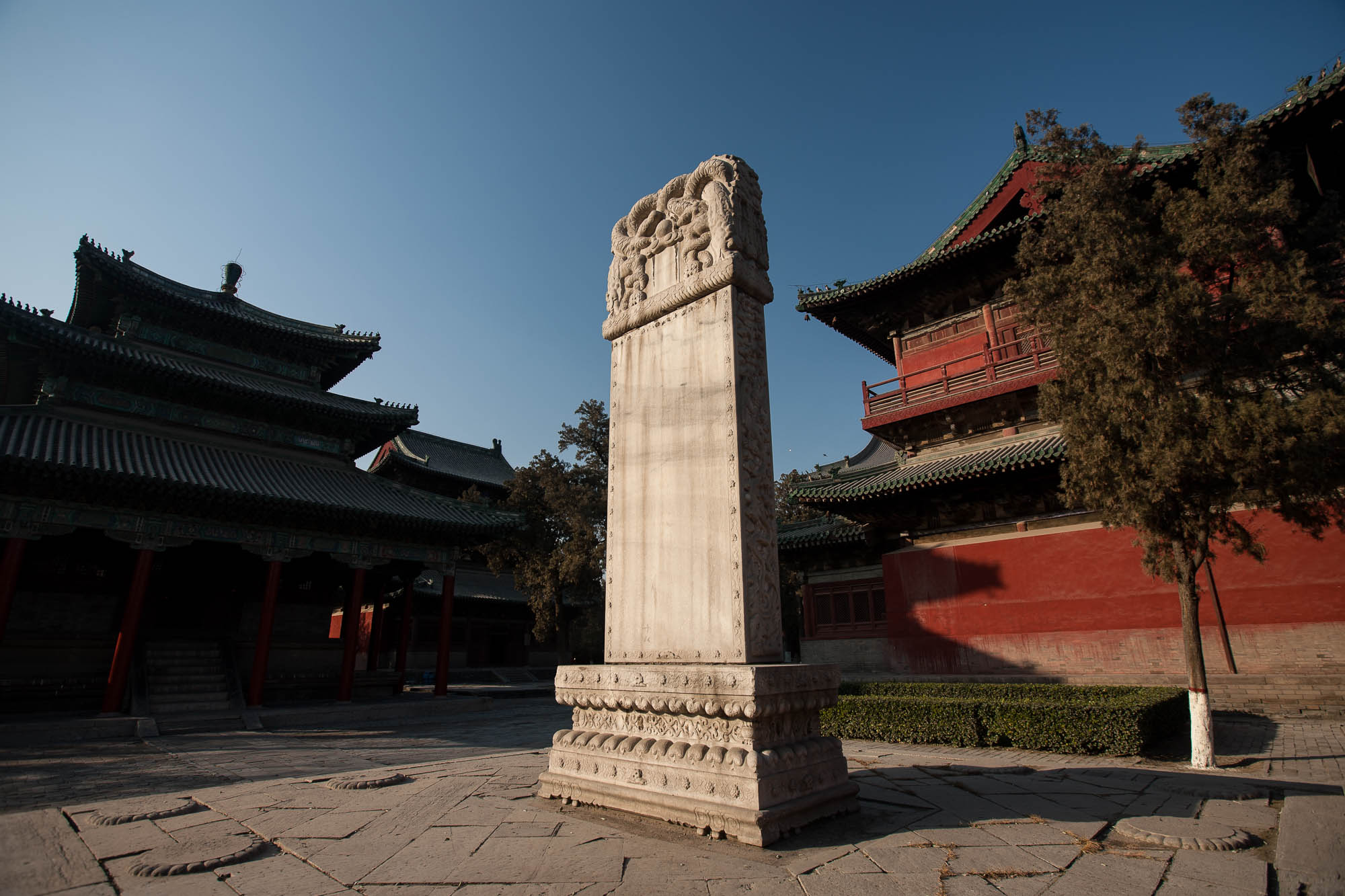 I noticed that many of the deities in this temple seemed to have a rather foreign look. Let me explain: most manifestations of Buddhism in China I had seen so far had been adapted to look Chinese. But not these here. They looked very Indian in a way: This was also true for the main attraction of the temple, the massive statue of the Goddess of Mercy: There were two young women standing next to me who were trying to count her arms. But they kept interrupting each other and had to start all over again. They eventually got to 42 which I guessed was right.

I was still wondering about the origin of the strangely foreign design. Maybe I used to know, but I forgot? Maybe I should have paid more attention in university?

I probably should have asked one of these guys: When I realized that I wouldn’t make it to Shijiazhuang 石家庄 today, I started looking for a hotel in the southern part of town. I found one, but it had no heating. Are you also wondering why this always happens to me? I really can’t explain, here’s how it happened today:

I go in. The owner, a lady in a thick jacket, shows me a room. It looks okay but not great. I am reluctant.

Chris: “You tell me how much you want!”

lady: “Well, how much would you be willing to pay?”

Chris: “You don’t even have heating in here, give me a break!”

lady: “What do you need heating for? There’s a mantou-bakery downstairs – don’t you feel warm?”

Yeah right. That’s why you’re wrapped in all those clothes and still got your arms crossed in front of you to fight off the cold.

Three hours later I agree to pay an extra 8 to get the electric heater. I am on my bed with ALL of my clothes on, the heater is humming and looking warm without actually doing anything, and I am wondering how all of this could have happened.