This post is about a 24km walk from Zhengding to Shijiazhuang. I visit a few temples and help out a Buddhist monk.

For those of you who might have been wondering what my room (my cold room) looked like last night: The glowing disc is the electrical heater I paid 8 yuan for yesterday. It will burn you if you touch it, but it doesn’t heat the room.

Anyway, When I peeked out from my sleeping bag this morning I discovered that the owner had turned off the electricity at some point in the morning hours. You know what that means: No power, no glowing disc.

What the hell, I thought, and decided to make a quick move to find some cultural relics that would cheer me up.

And find them I did: This one is Kaiyuan Temple 开元寺. It’s from the Tang Dynasty (唐 618-907), and it has a big turtle made of stone and a bell tower as friends.

Then I ran into a hobby falconer who was training with his bird: He told me this was a 隼 (it took me a while to find this character – it reads sun and means “falcon”). You could get one for about 1.000 rmb.

I wondered If I could get a falcon to sit on my shoulder while I was walking. I could ask them to mess with other people’s hair whenever we felt like it… Linji Temple 临济寺. After having seen so many different temples in this place, I was descending into a “seen-one-seen-em-all” kind of mood. It was all beginning to bore me a little. But then I noticed this monk sitting there on the left side of the gate.

Damn, that guy is so tuned into his meditation thing, I thought, he’s like totally zen and stuff, doesn’t even notice me, how cool is that?

Then I got the tele out: The master of zen turning out to be just a dude on his phone?

I went over to inquire: “Hello, master, what are you doing?”

The dude got very happy when he saw me. I was a foreigner, so maybe I could help him fix his problem? He had somehow switched his mobile phone language to English and was desperately trying to change it back. Guanghui Temple 广惠寺. I know this has been a lot of temples for you to look at, but Zhengding has so many of them and you gotta appreciate them as they come.

I climbed up and checked out the road to walk from Zhengding to Shijiazhuang: 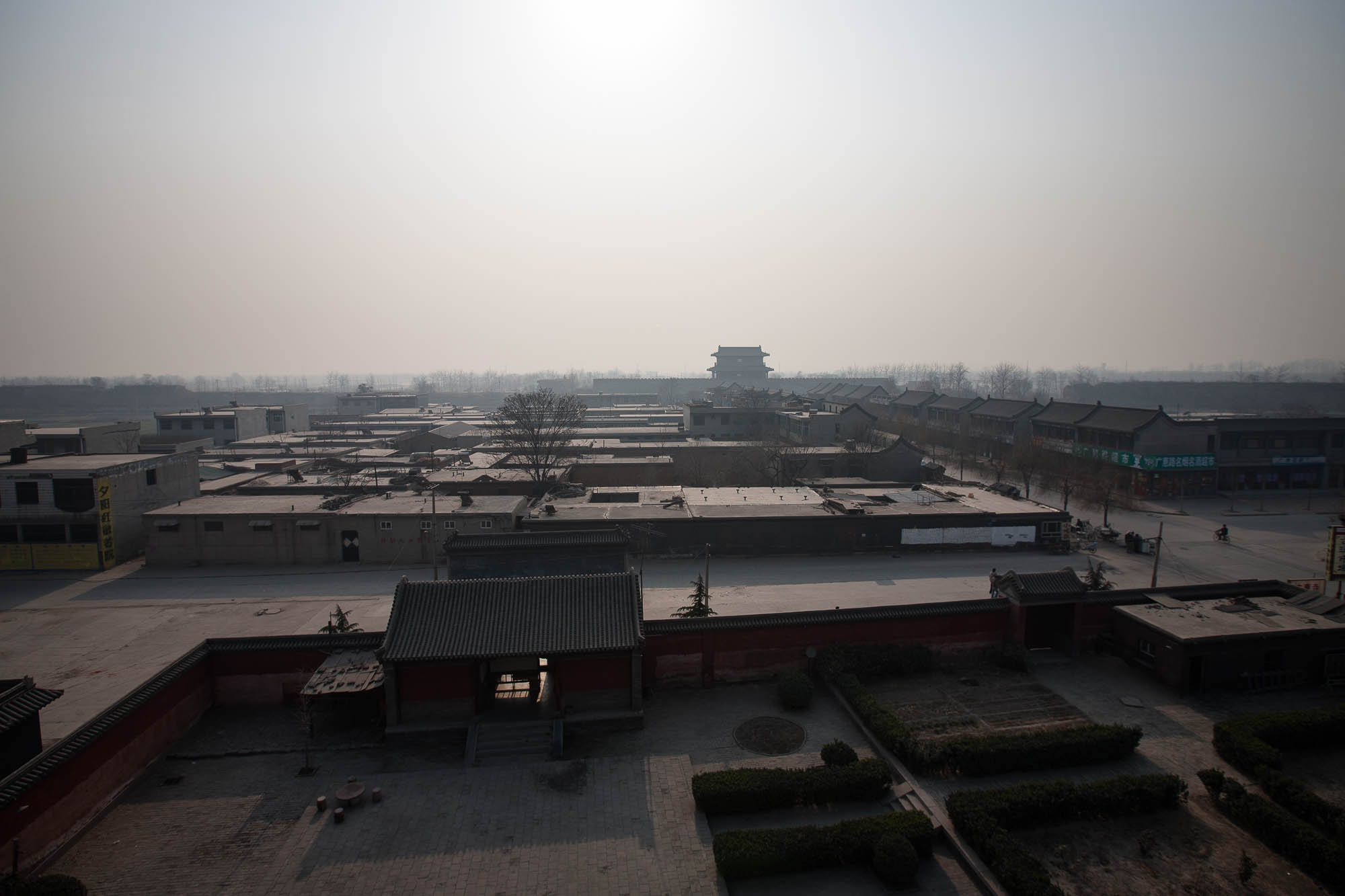 Then I went back down and got on that dusty road, facing south, toward the old town gate.

Three hours later I was in the capital of Hebei Province – Shijiazhuang: It seemed to be a typical Chinese city – lots of people in tall buildings: These are corn crackers sold on the street.

There was construction going on everywhere, which reminded me of Beijing: And it all felt very different from the countryside I’d been walking through for the last few weeks: It’s kind of weird being in a place like this now. One thing I’ve noticed is that there are good-looking women everywhere! I don’t know if it’s really because there are so many of them here, or if it’s rather because I’ve been spending so much time in the countryside.

Anyway I’m staying in a nice hotel which costs me about 150 rmb for the night. The heating works like a charm, and I’m getting my clothes washed, too.