This post is about a 28km walk from Törökszentmiklós to Szolnok. I start out in the mud, then I have ice cream, and then I get a bit lost.

Wasps, a few of them, right behind the nylon. I could hear their buzzing sounds, and sometimes I could see them crawl around on the outside of my tent. I was petrified.

It took me a long time to find the courage to get up and leave the safety of my tent, but these wasps turned out to be pretty chill. They were not interested in me, in my food, or in any other thing except for the tent. They loved the tent and the space under it where it had flattened the grass and left it moist in the morning air.

Thanks for being cool, wasp guys, I said while I was packing up my stuff, and then I got going.

The dirt path had dried up a bit, and so it was considerably easier to walk than during the evening before. Still, there were some difficult patches, but overall I was happy that I hadn’t taken the main road. I saw a few rabbits and some of their poop, and one time a deer leapt out from the underbrush right next to me and darted into the fields. It was beautiful.

I went back to the regular road after a while. But lo and behold! It had a bike lane. I walked on the bike lane until I got to the next town, and then I walked right into an ice cream shop. Two women were working there. I asked them for a scoop of chocolate and a scoop of cheesecake. They let me charge my phone and one of my power banks, and they also agreed to fill up my water bottles.

My misery began when the navigation app sent me onto a freeway a little while later. I stood there for a while, at the offramp of the freeway, watching the cars and the trucks speed by. Then I decided that it wasn’t worth it. I didn’t want to die on the fucking freeway.

So I turned around and traced back my steps until I got to a railroad crossing. I made it to the other side of the freeway via an underpass next to the railroad tracks. From there a narrow path lead into the direction that I wanted to go. There was a barrier blocking the path, but the trampled grass next to it suggested that many people had taken this way before me.

A little while later I was on a completely straight gravel road that led through a forest. I checked the map: the city of Szolnos lay straight ahead.

walk from Törökszentmiklós to Szolnok: 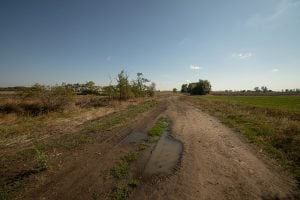 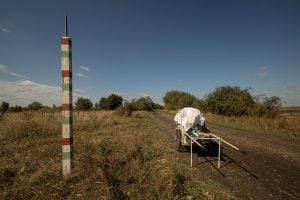 the Caboose and a Hungarian thing 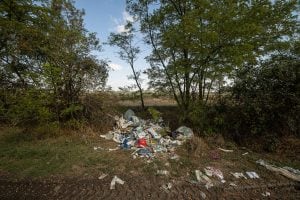 have I mentioned the trash piles? 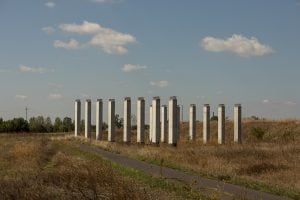 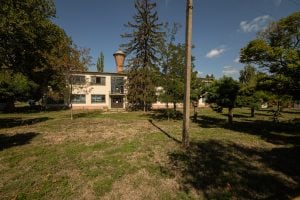 not sure what this building was for 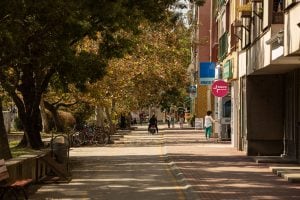 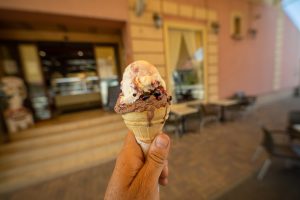 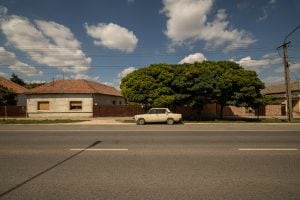 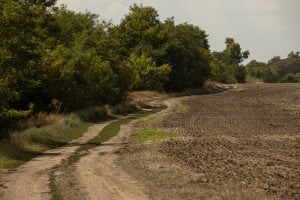 the first path in a while that wasn’t just straight 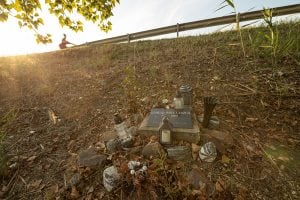 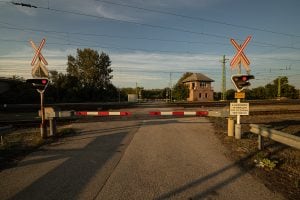 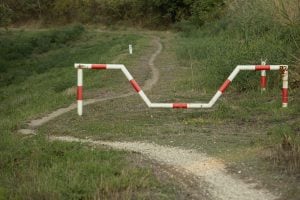 barrier with a way around 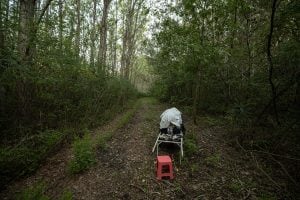 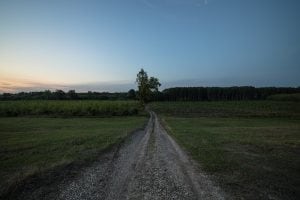 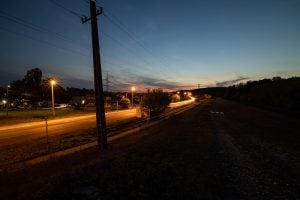 nightfall in the outskirts of Szolnok

Day 607
from Törökszentmiklós to Szolnok