Things often look very different at night than they do in the light of day. When I woke up this morning, the room seemed much better than before: 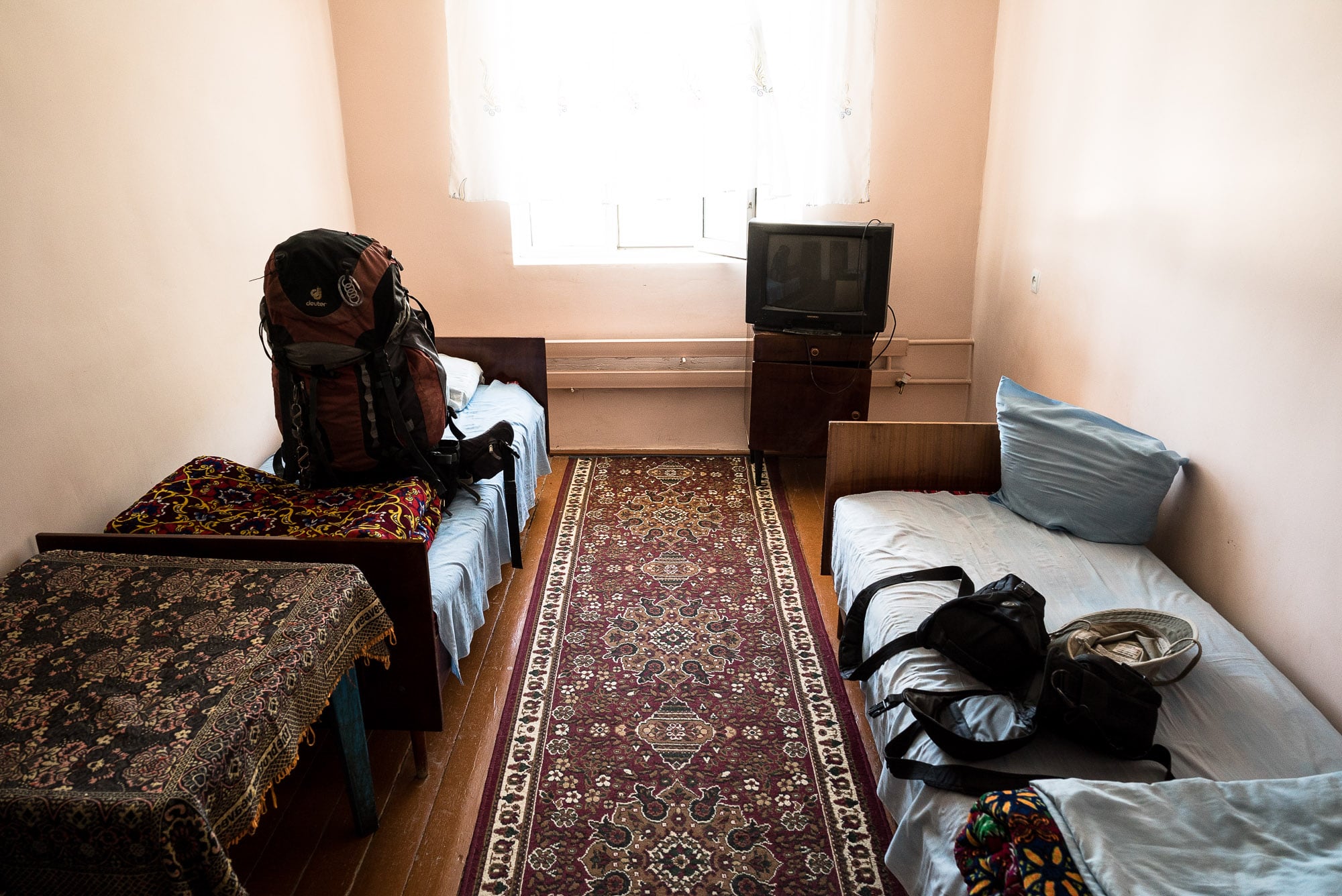 Sure, it was very hot, so hot in fact that many of the other hotel guests were sleeping with their doors open, but it was an okay room.

I packed my stuff, and then I did something I should have done long ago – I went into a fabric store: 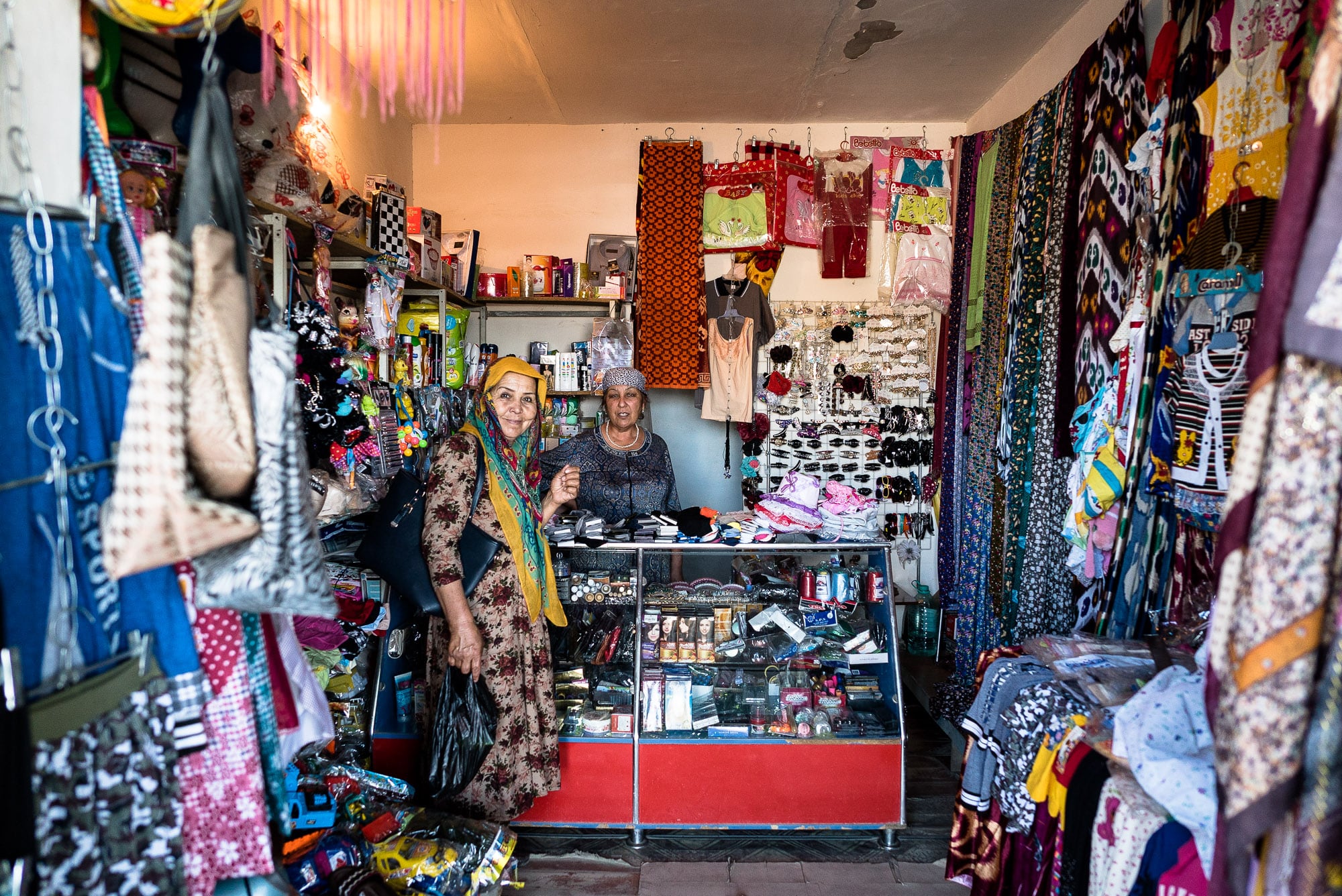 And there I purchased a nice, white dress for the Caboose: 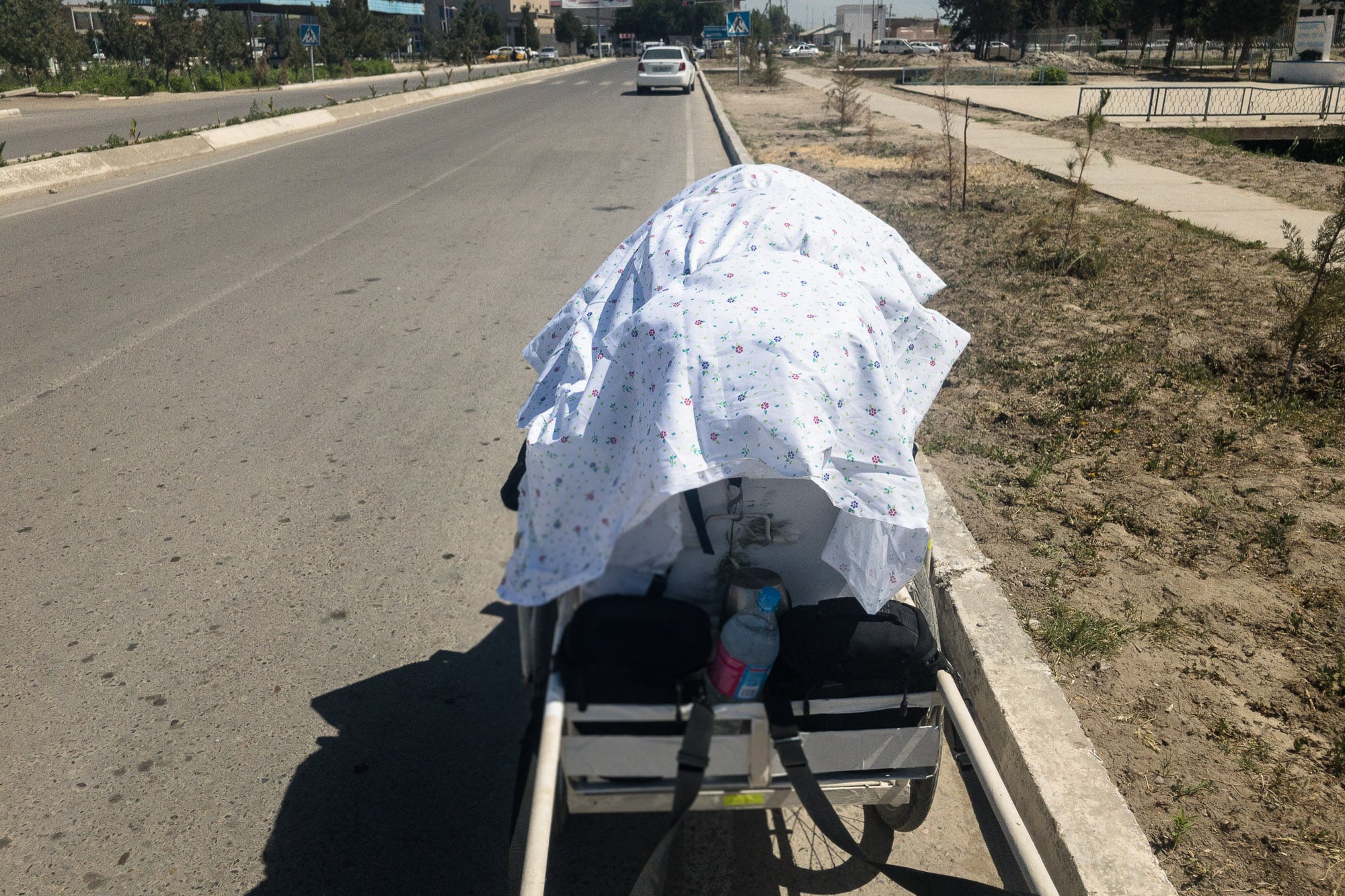 Well, it wasn’t all white, as it had little colorful flowers on it, but still, it was mostly white.

The reason I got this was because my backpack was getting hot in the sun. The Caboose herself was white, which meant that she didn’t really heat up that much, but my backpack was dark, and sometimes I worried if my cameras were in danger of going kaputt from the heat. Now, with the help of the white dress, things wouldn’t get that hot anymore. At least that’s how I imagined it to be. 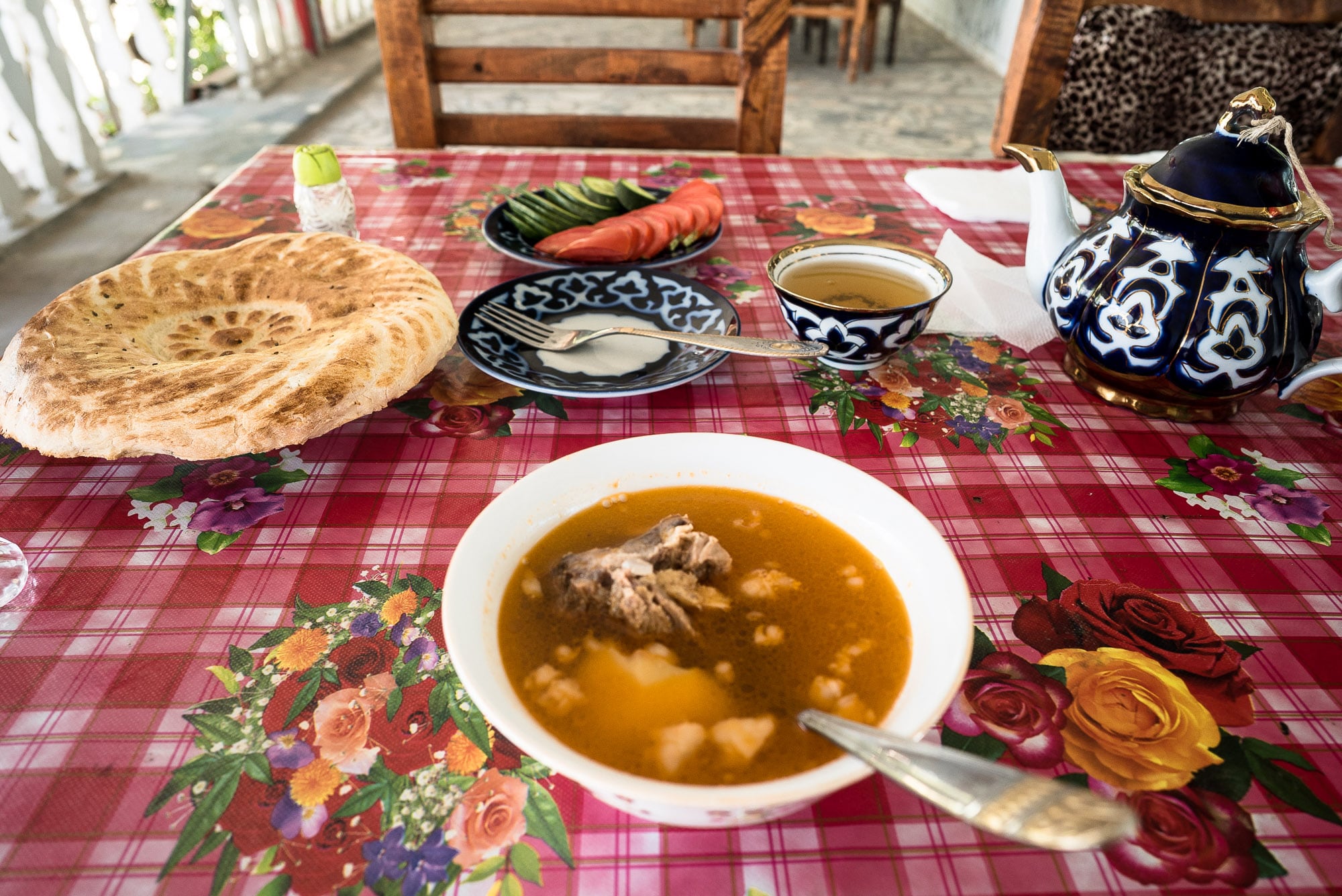 Soup, bread, salad. I sat there for a while, then I went back outside and into the heat.

I was walking along a canal for most of the day: 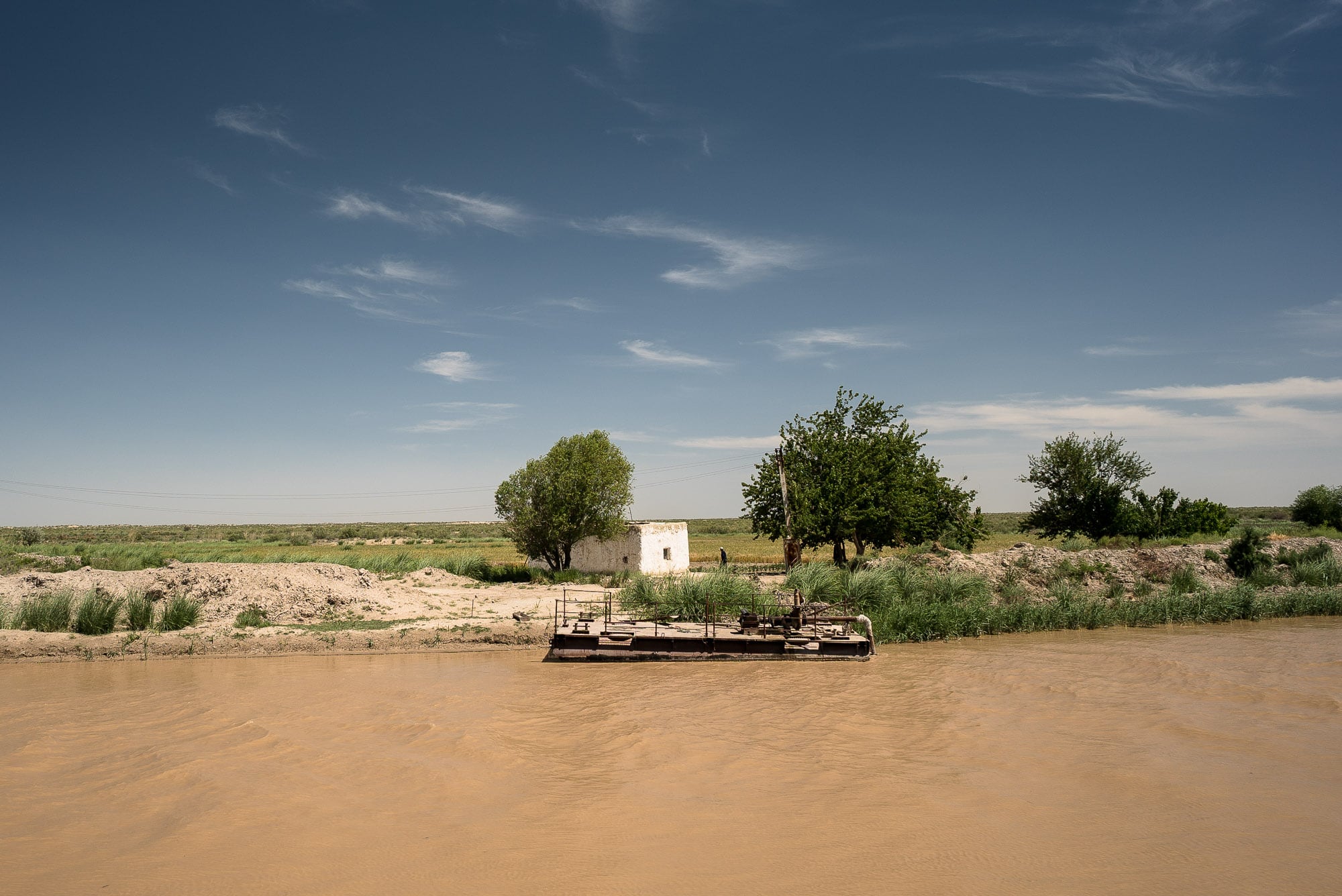 Sometimes there was water on my side of the canal as well: 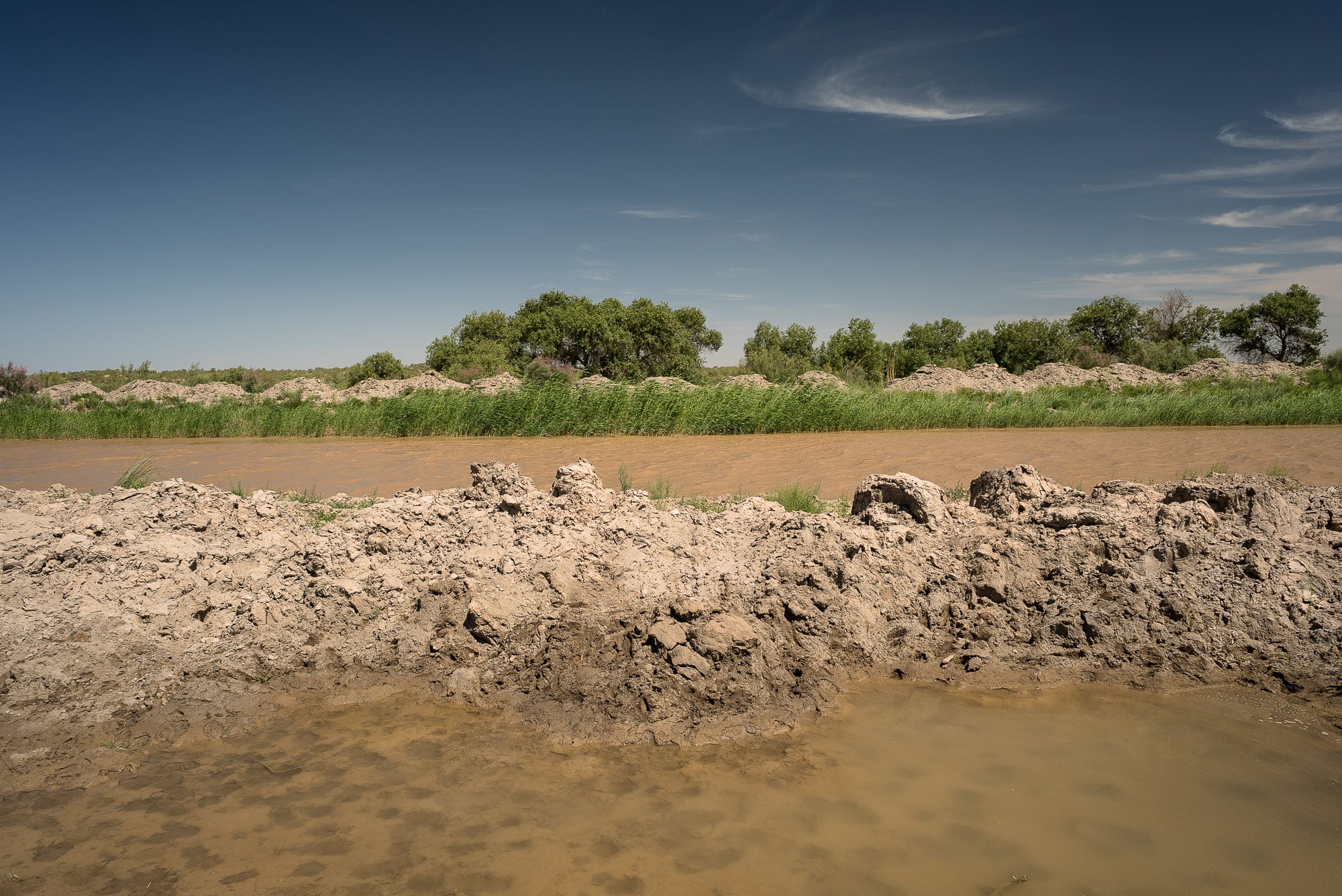 And sometimes there were little sand dunes on the other side of the road: 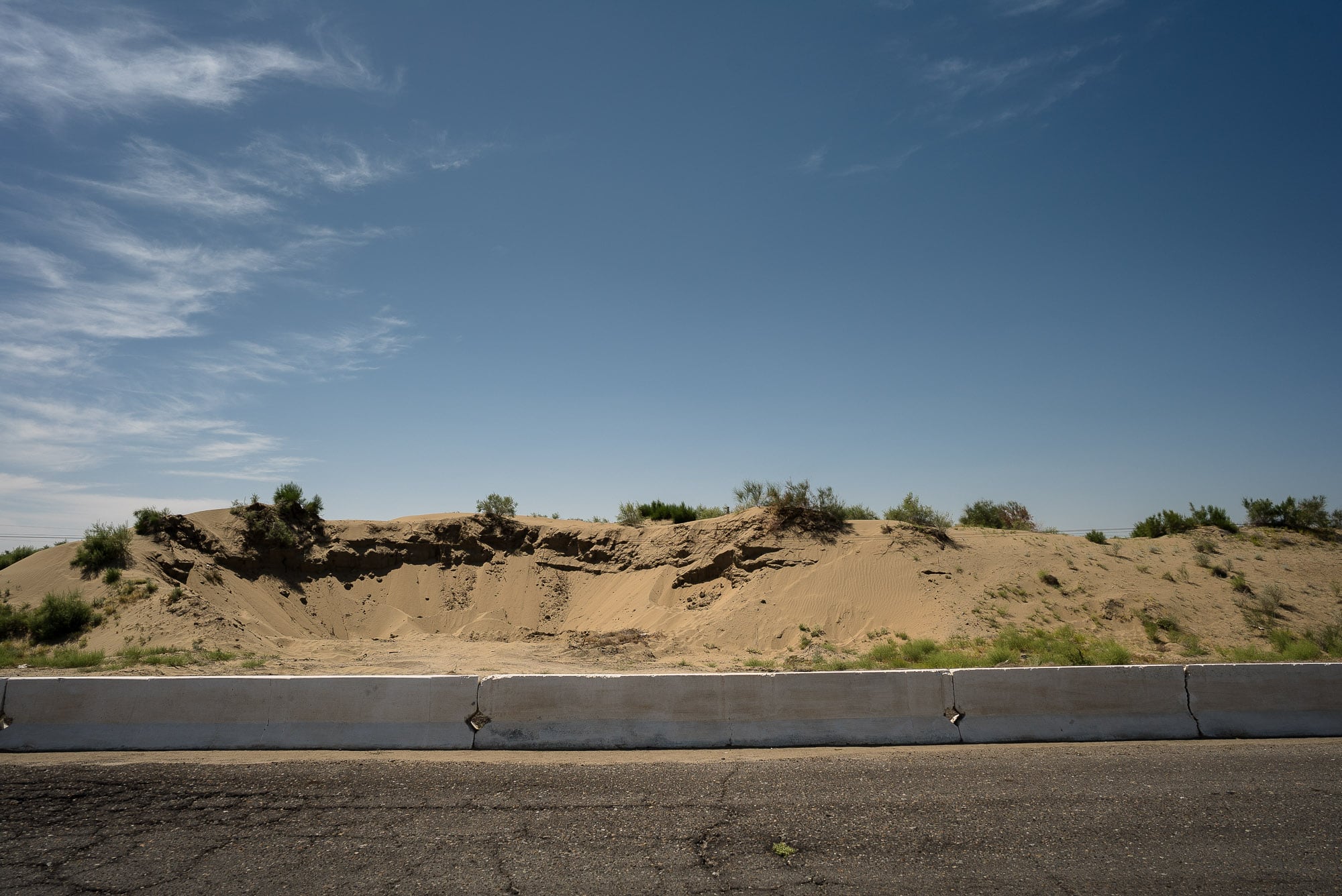 The closer I got to the Turkmen border, the less people I saw. At times there wasn’t even a car for more than a half hour.

One time there were a few men fixing the road, and we exchanged a few words: 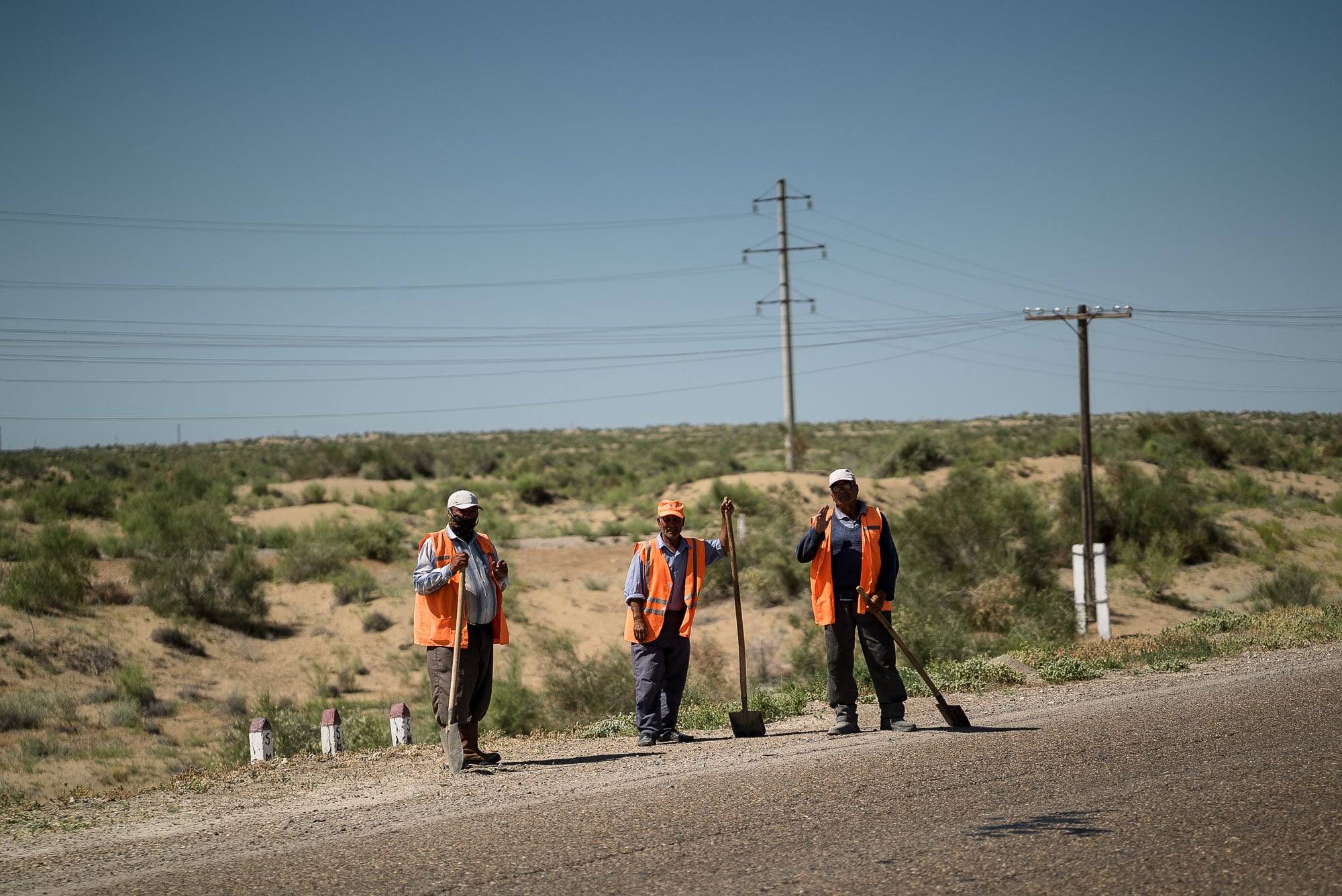 Some others were transporting parts for a gas production facility: 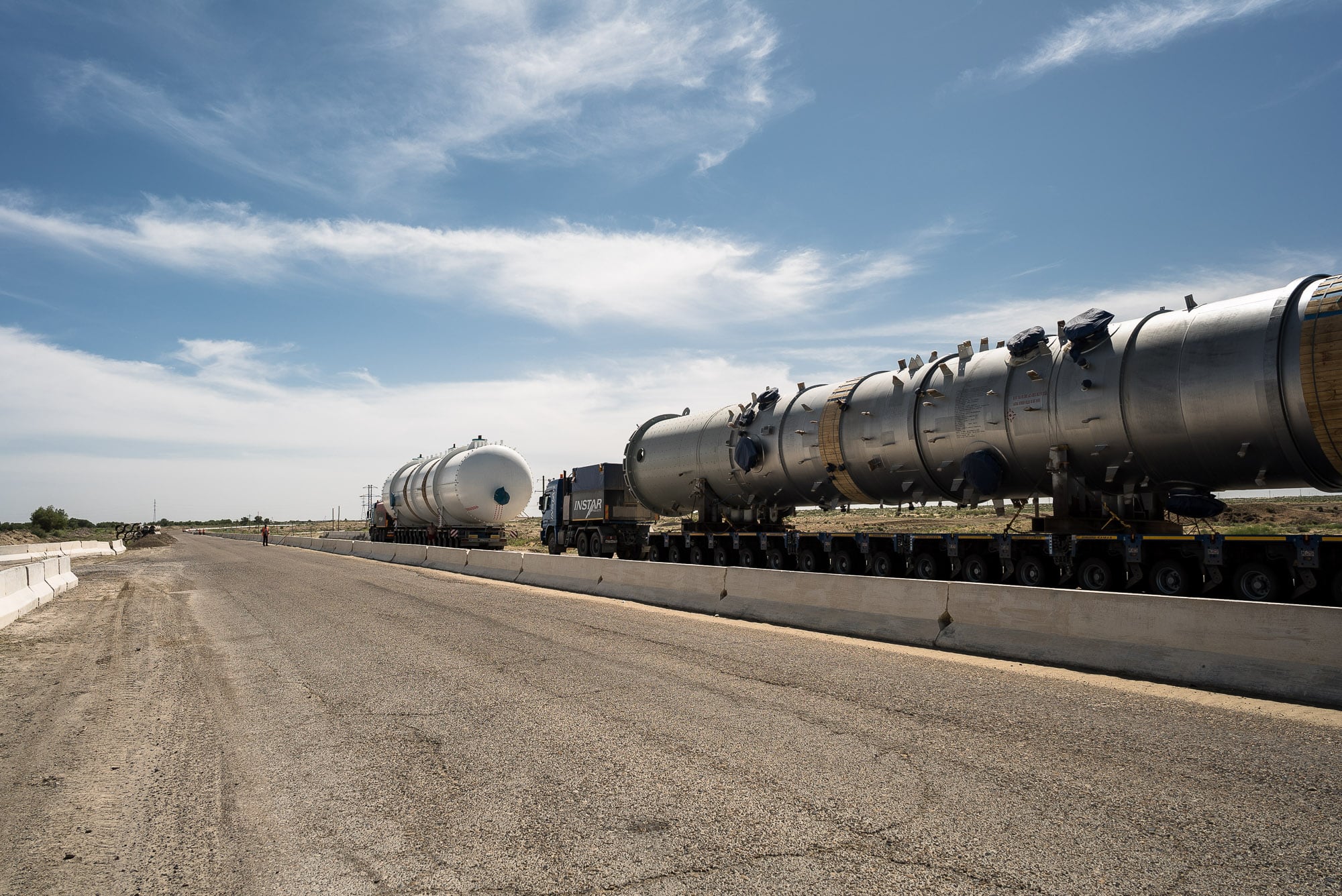 At first I thought I was looking at a space rocket.

Then I ran into Claudia and Daniel from Germany: 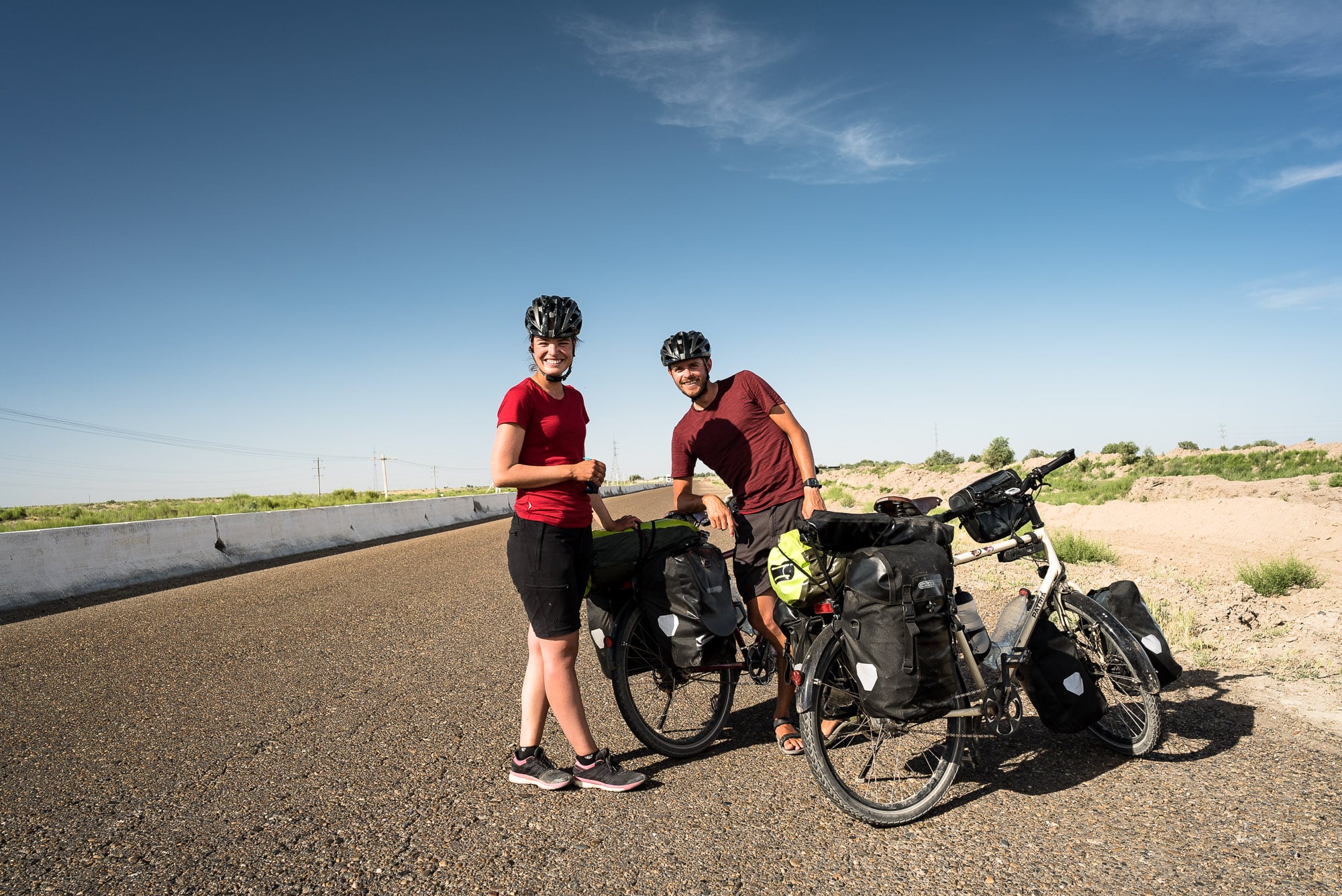 They had just crossed into Uzbekistan from Turkmenistan, and they did something few other cyclists had ever done when I met them: they sat down with me and made tea. It felt very nice and very civilized, almost as if we were going to have biscuits or cake anytime.

We hung out for maybe forty minutes, then we went back to our separate ways.

Mine was a quiet one:

I went off the road once, because I wanted to touch the water in the canal: 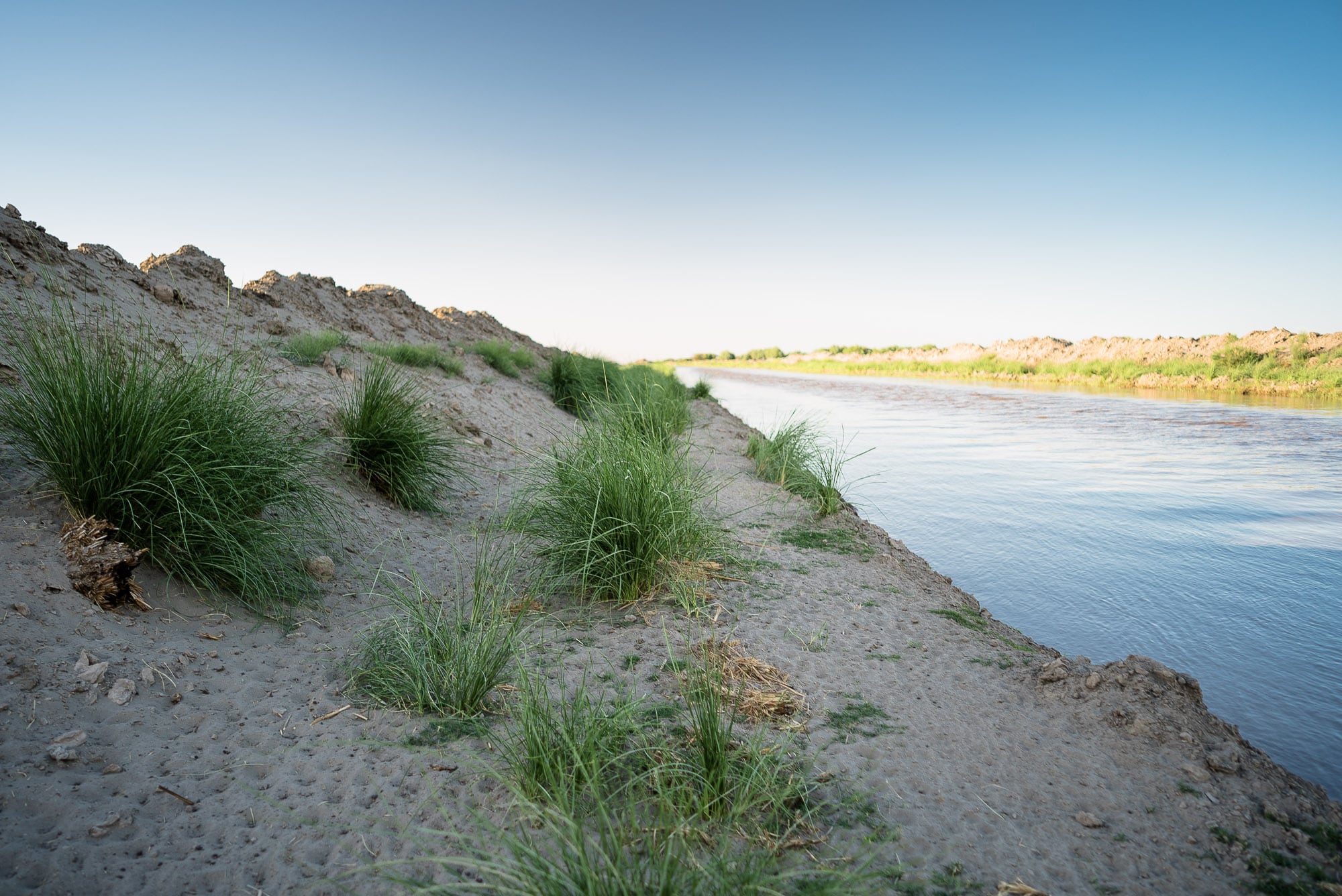 It came from Turkmenistan, that water, so naturally I was very excited about it:

Listening to the video now I realize how tired I must have been. I had almost no voice at all. 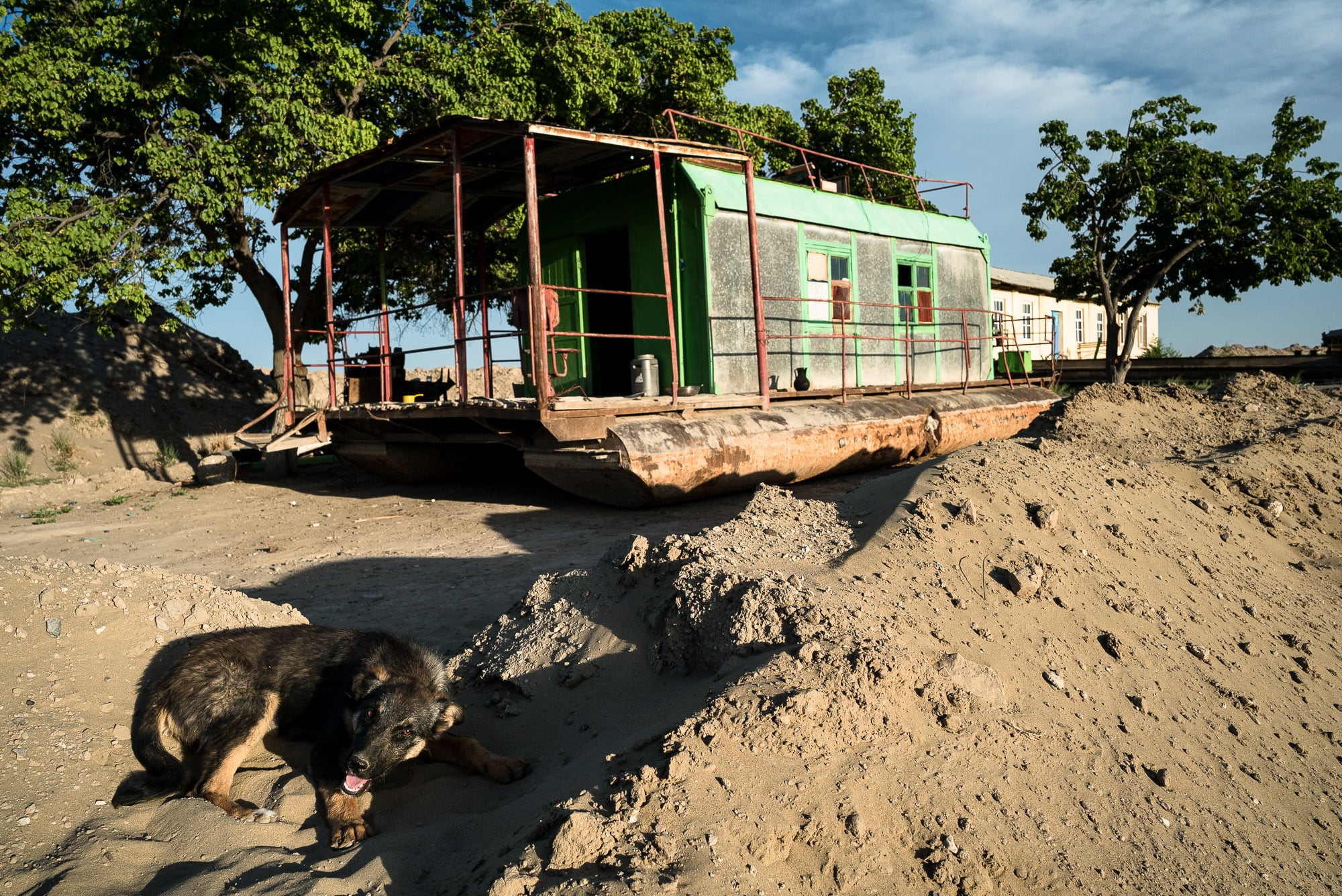 And a work boat: 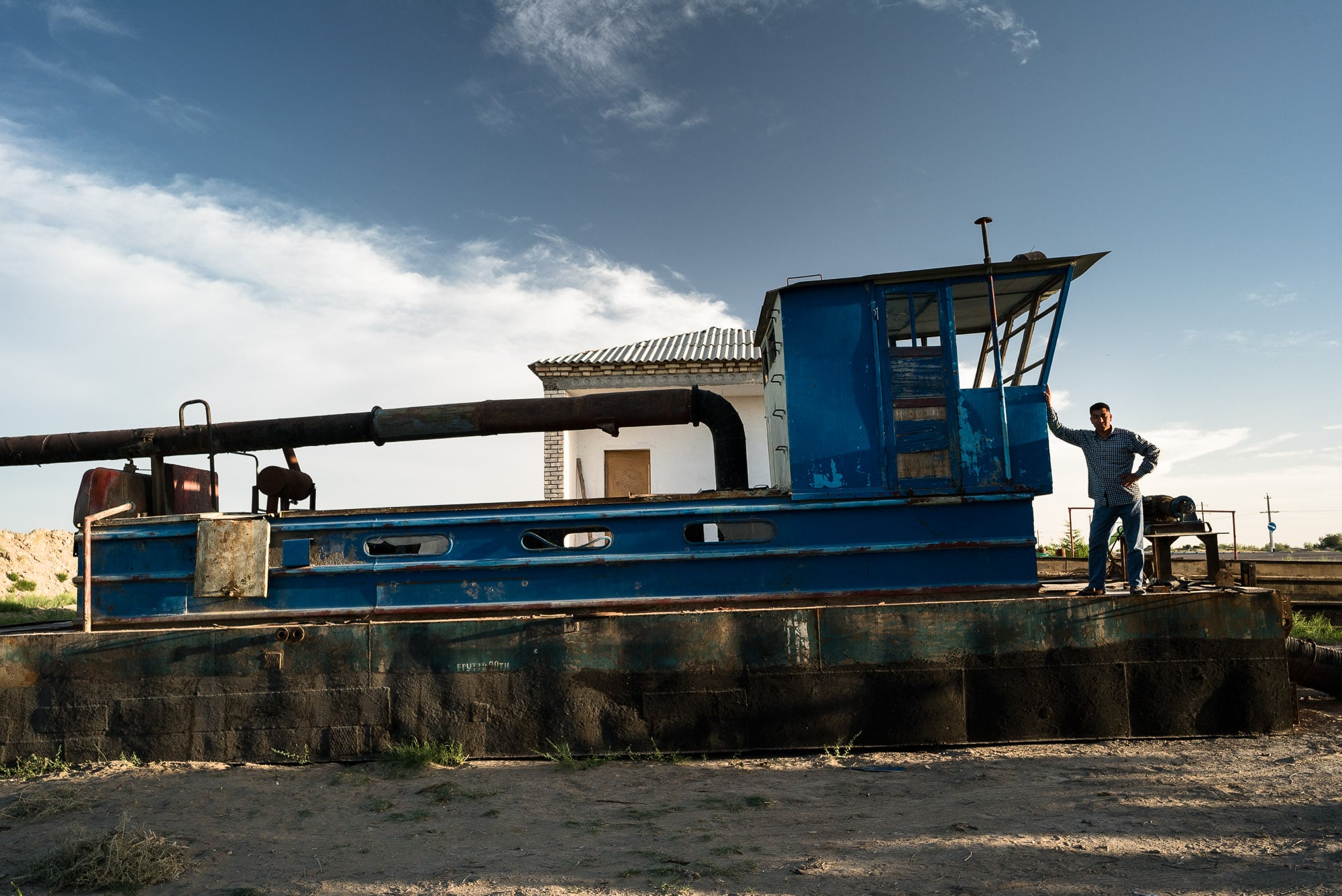 They belonged to some people who were working on the canal. When I asked them about a possible place to store the Caboose for a month, they told me I could just leave it at their house. I was going to do that until we started talking about the price, upon which I decided to walk up to the actual border and ask there.

I passed my last flock of sheep in Uzbekistan: 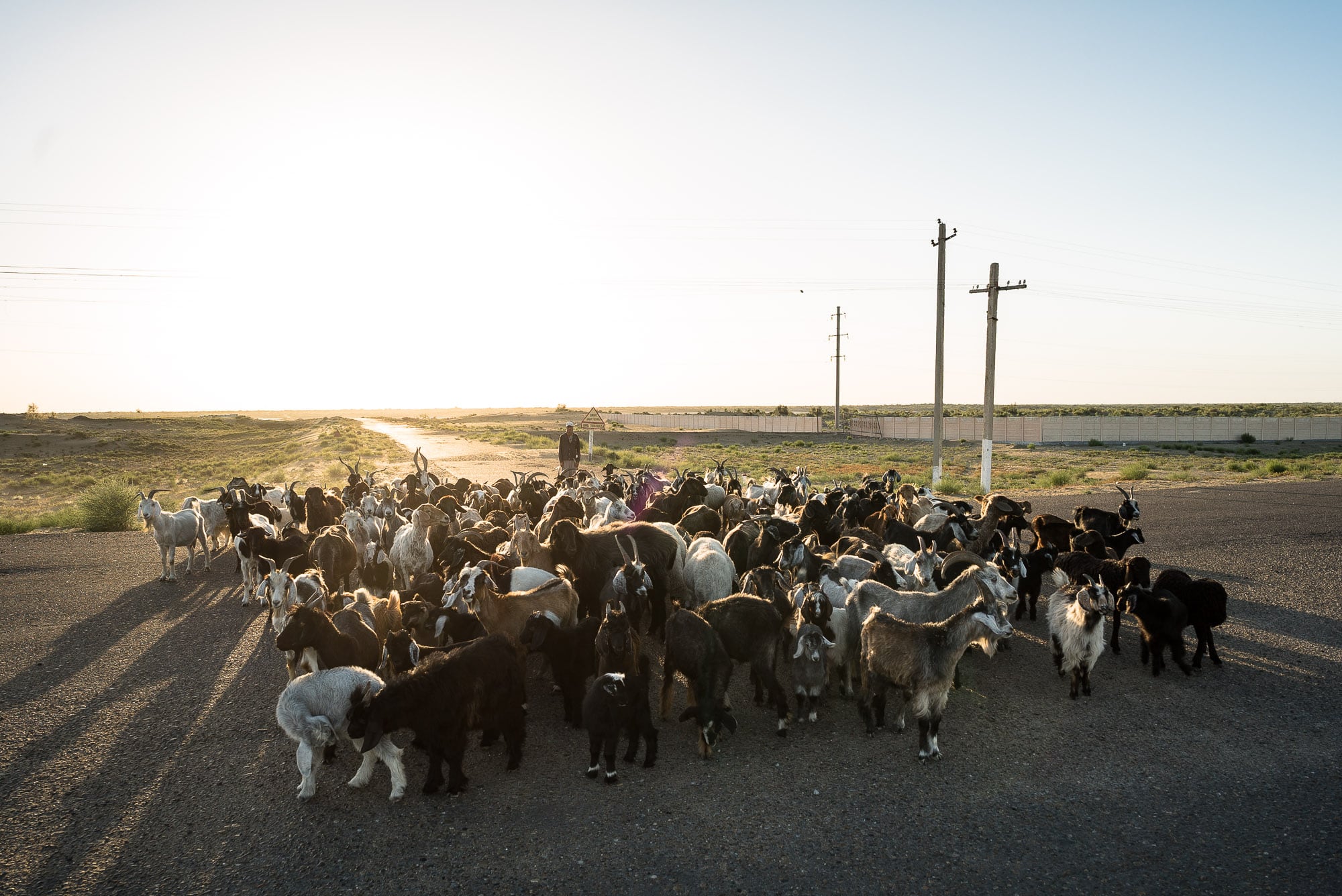 And then I reached the border. It was a highly sensitive area where photography was not allowed, so I can’t show you what the border looks like.

But in the end I found Marguba’s little restaurant right on the border, and she kindly accepted to host the Caboose until I would come back four weeks later: 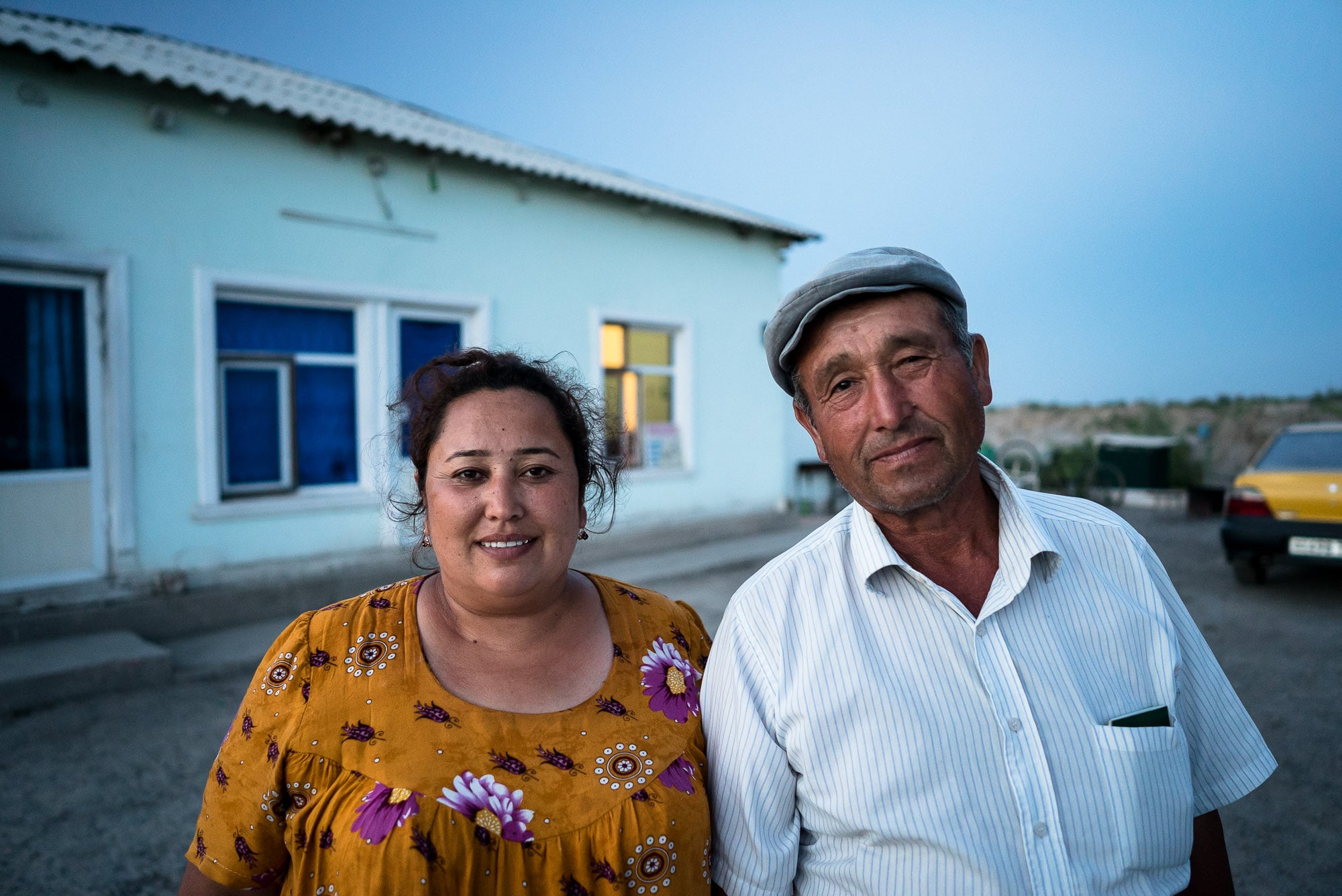 Hopefully I’d have my Turkmen visa by then.