When I got back to the restaurant where the Caboose had spent the night, the first thing we all did was take photos together: 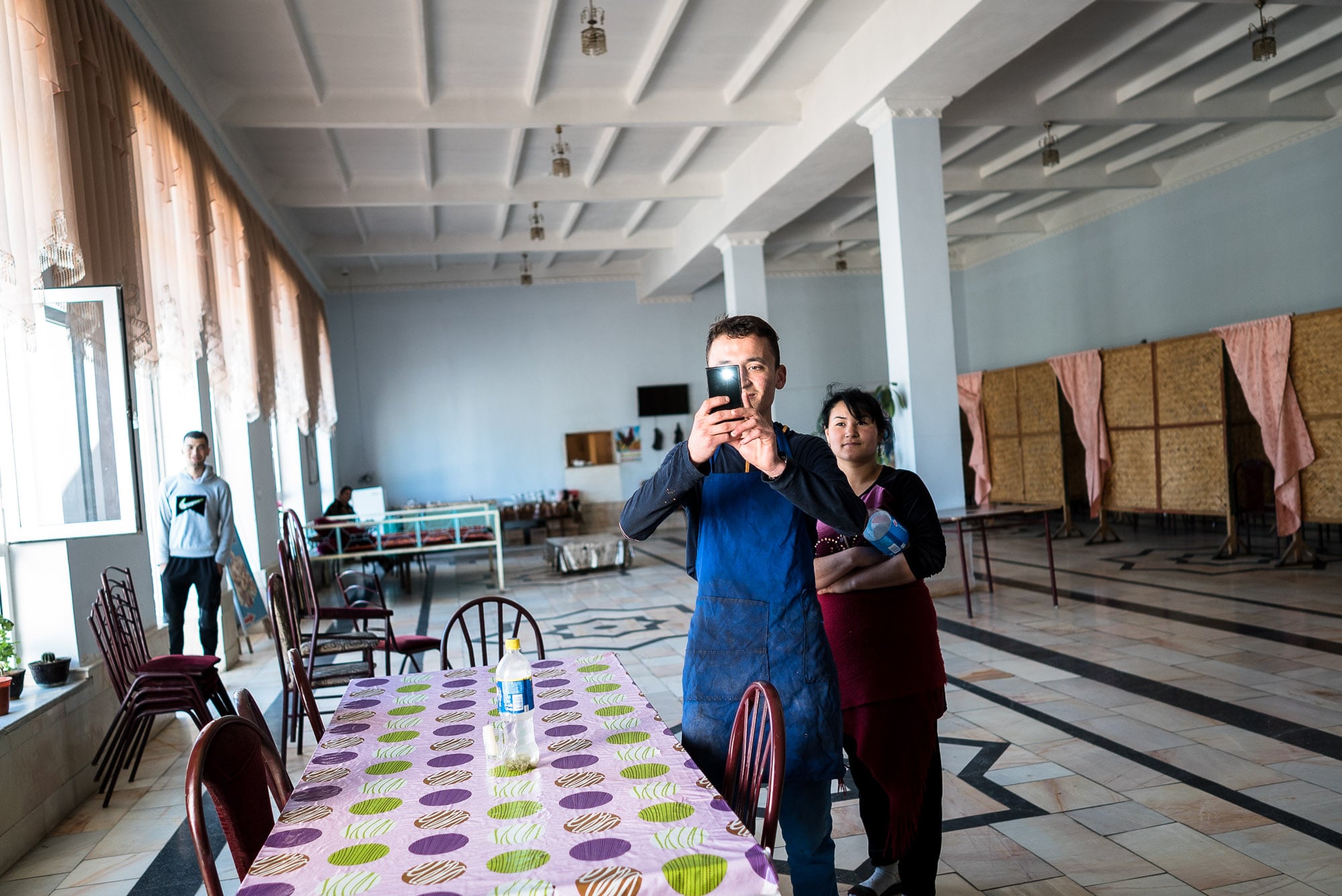 Lots and lots of photos: 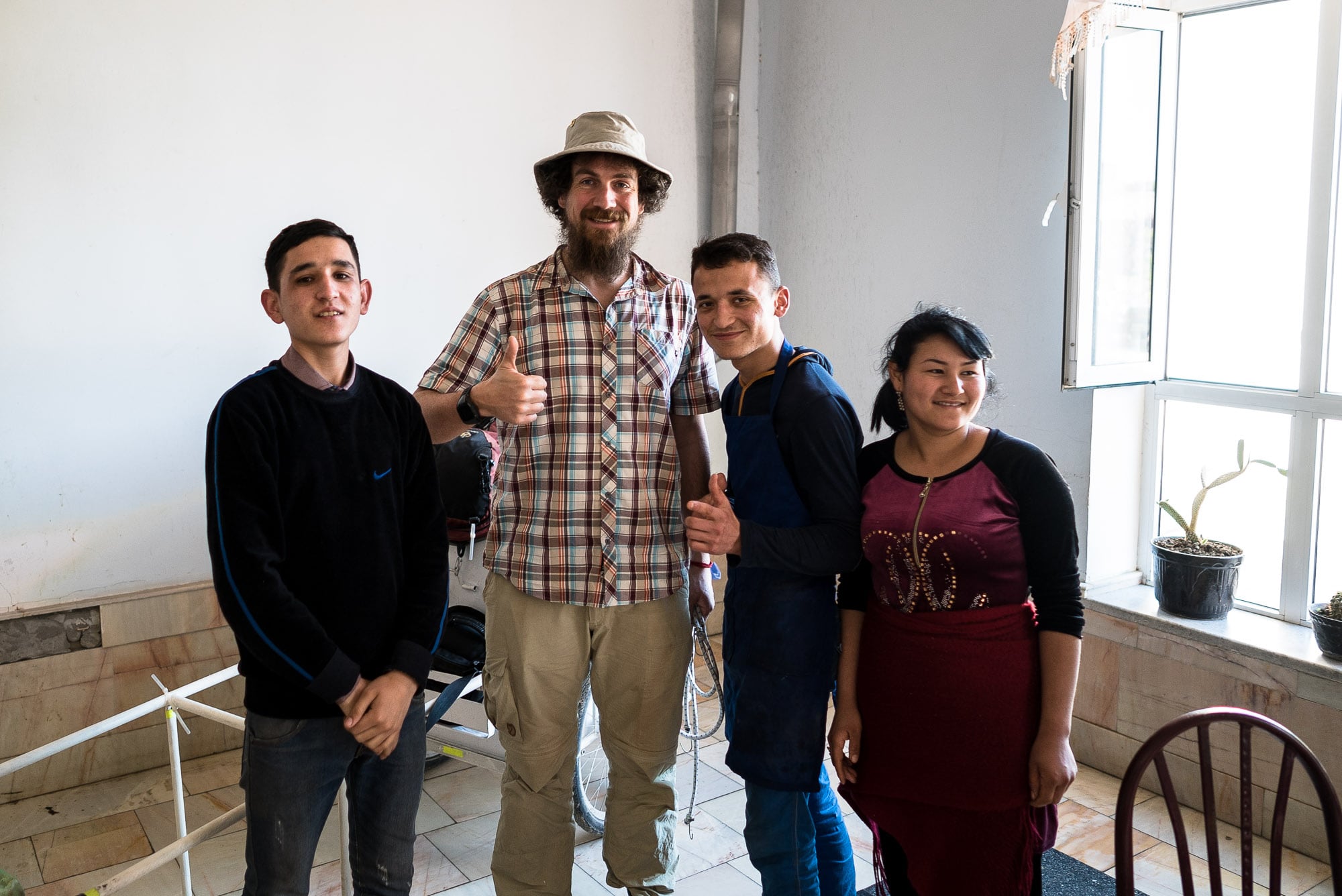 And because everyone felt sorry that I hadn’t been able to spend the night there, I got treated to a very nice breakfast of chicken tabaka: 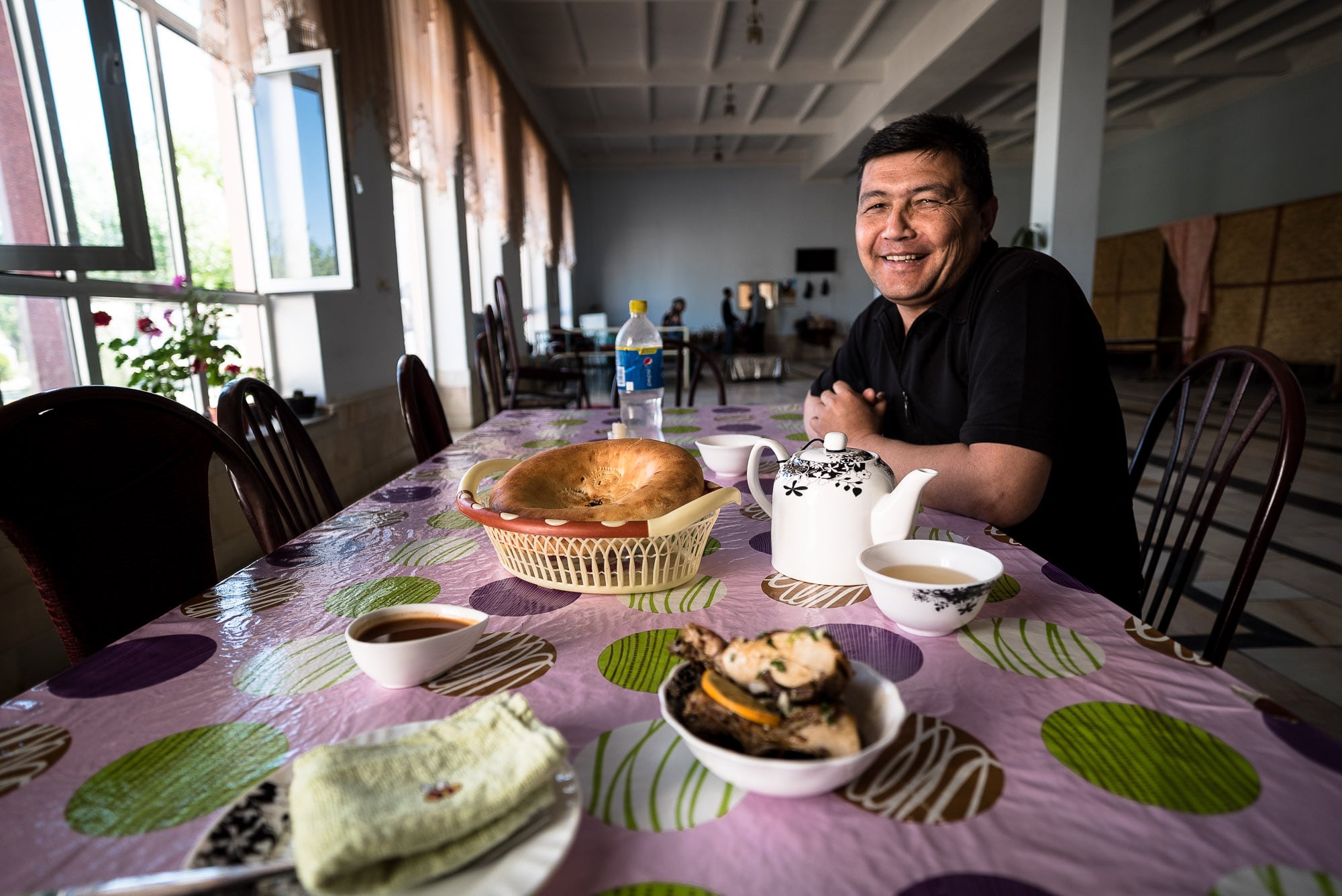 I was mesmerized by the amount of empty vodka bottles they had in the back yard: 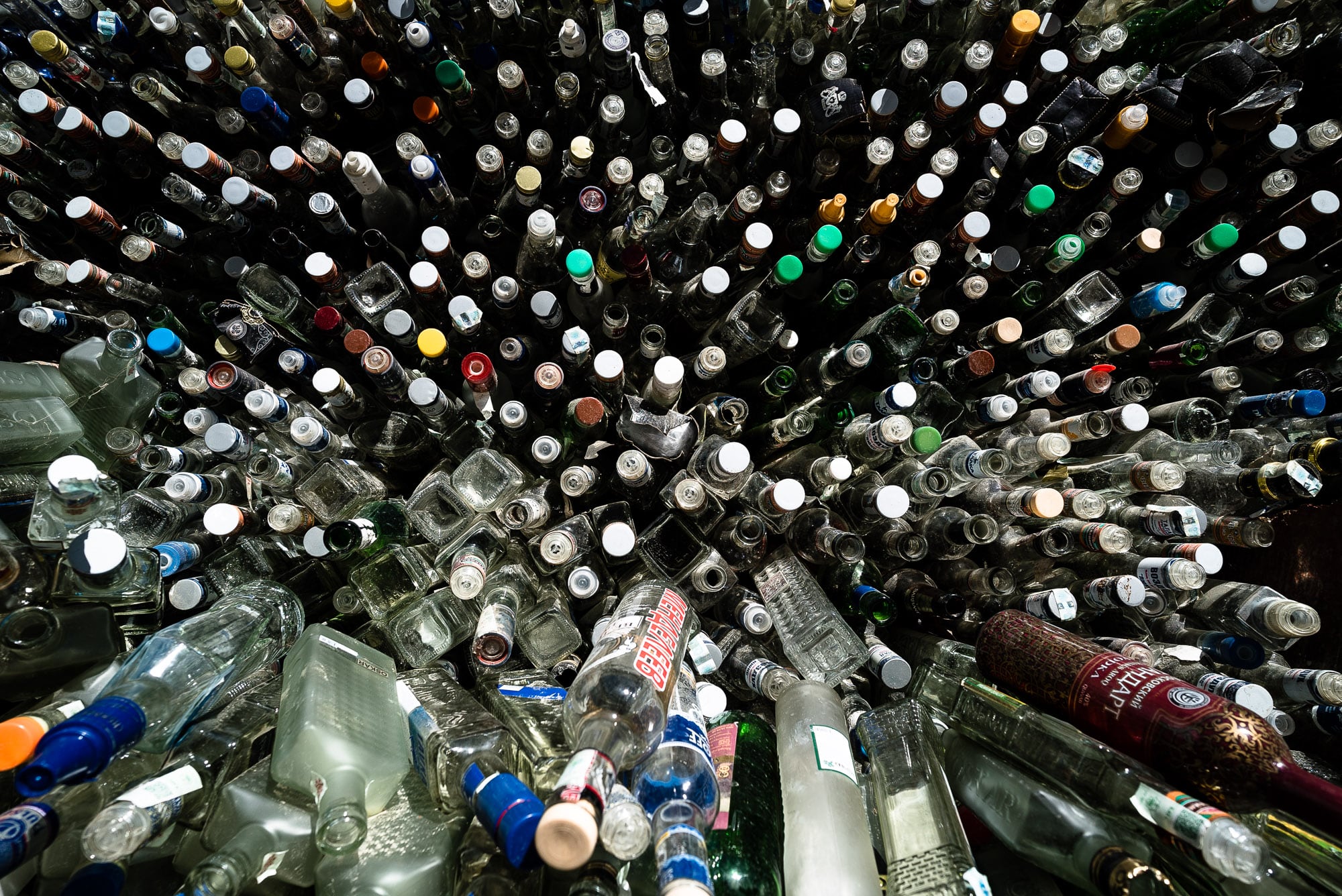 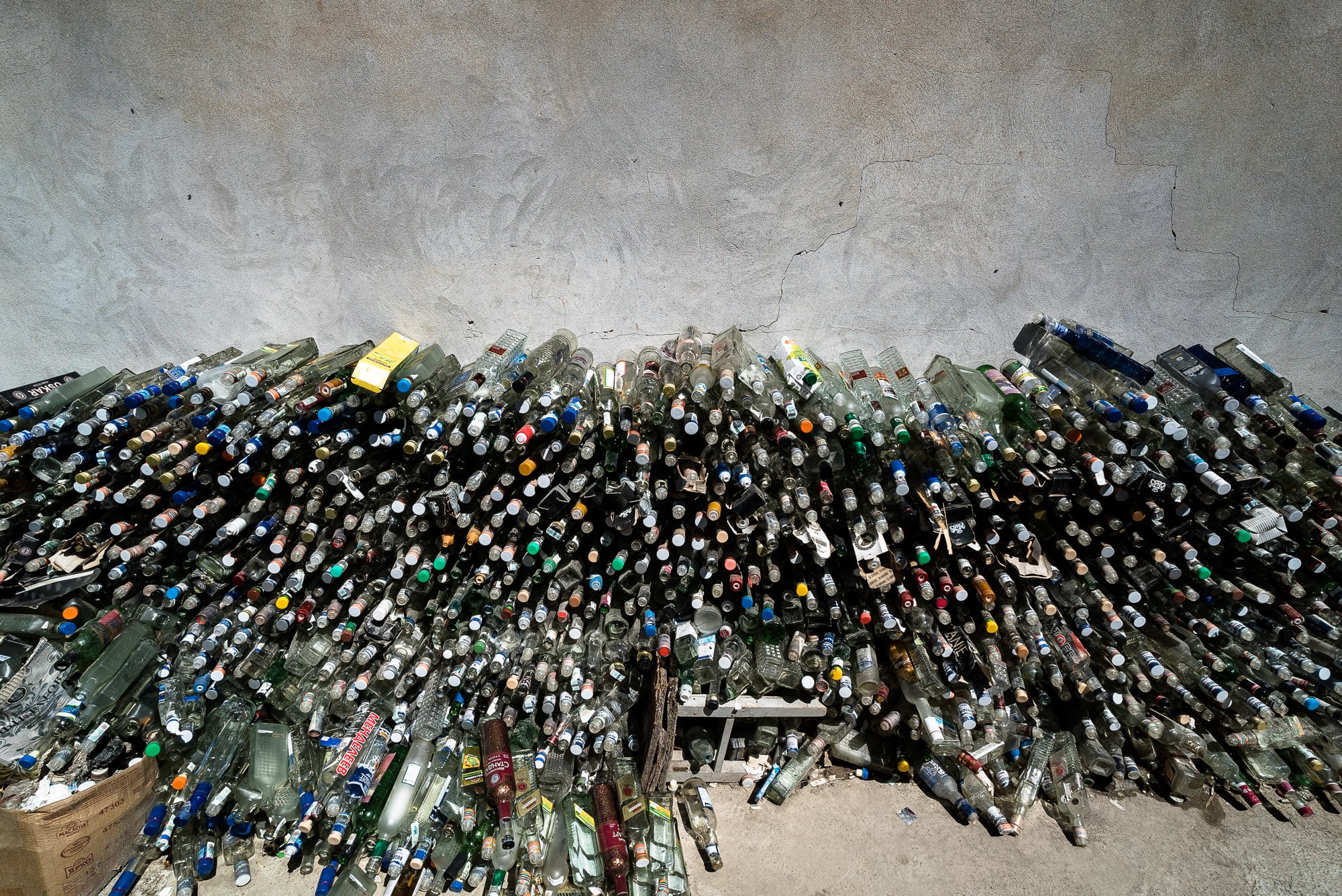 I loved it all so much that I even made a video of it:

When I went outside and started walking, I noticed a shaky little bridge and took my Let’s Walk video right away:

And then there was a big cow: 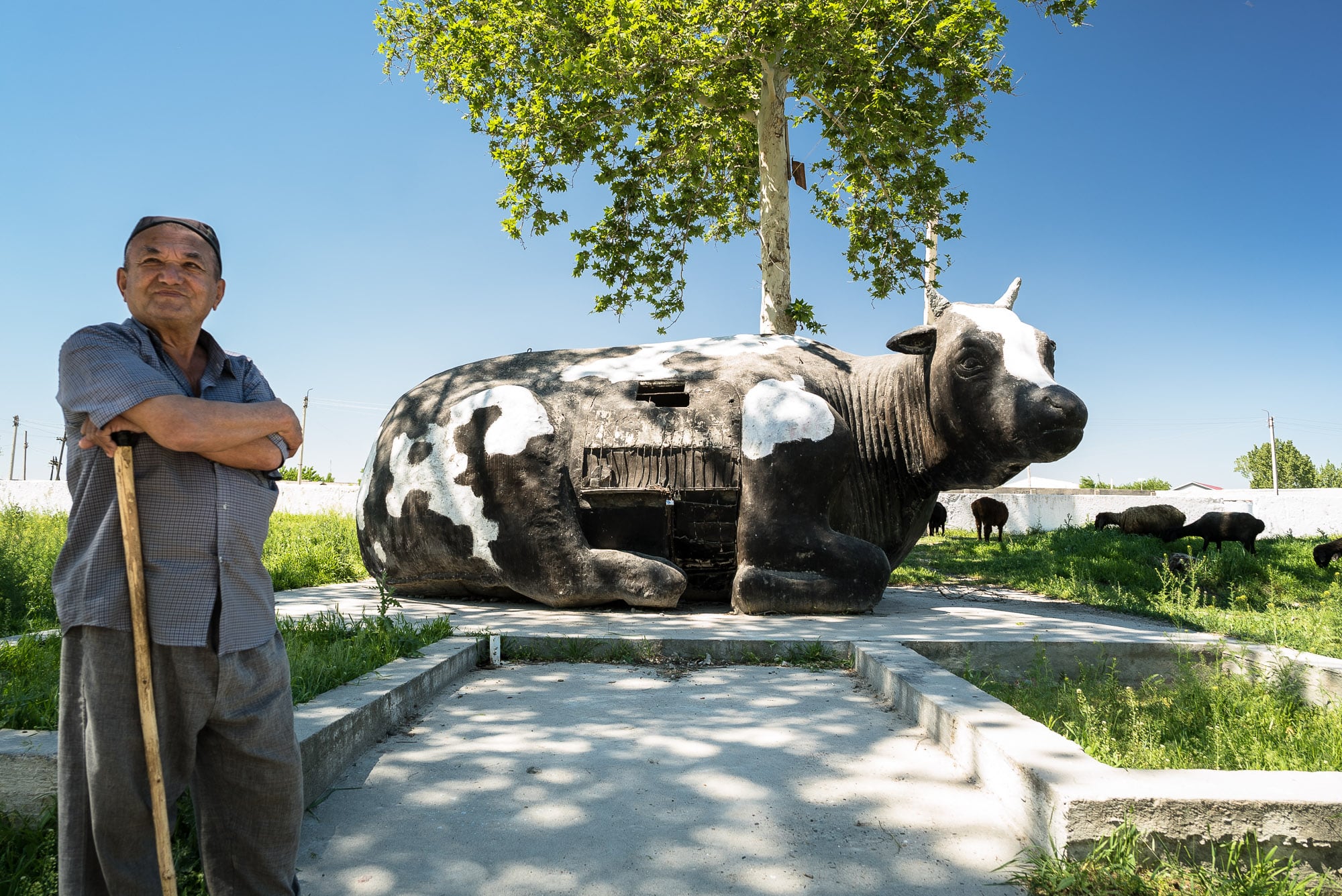 It was a monument to all cows, the shepherd told me. Post-Soviet, he said, though I thought it had a certain Soviet charm to it.

As did the hole in the divider: 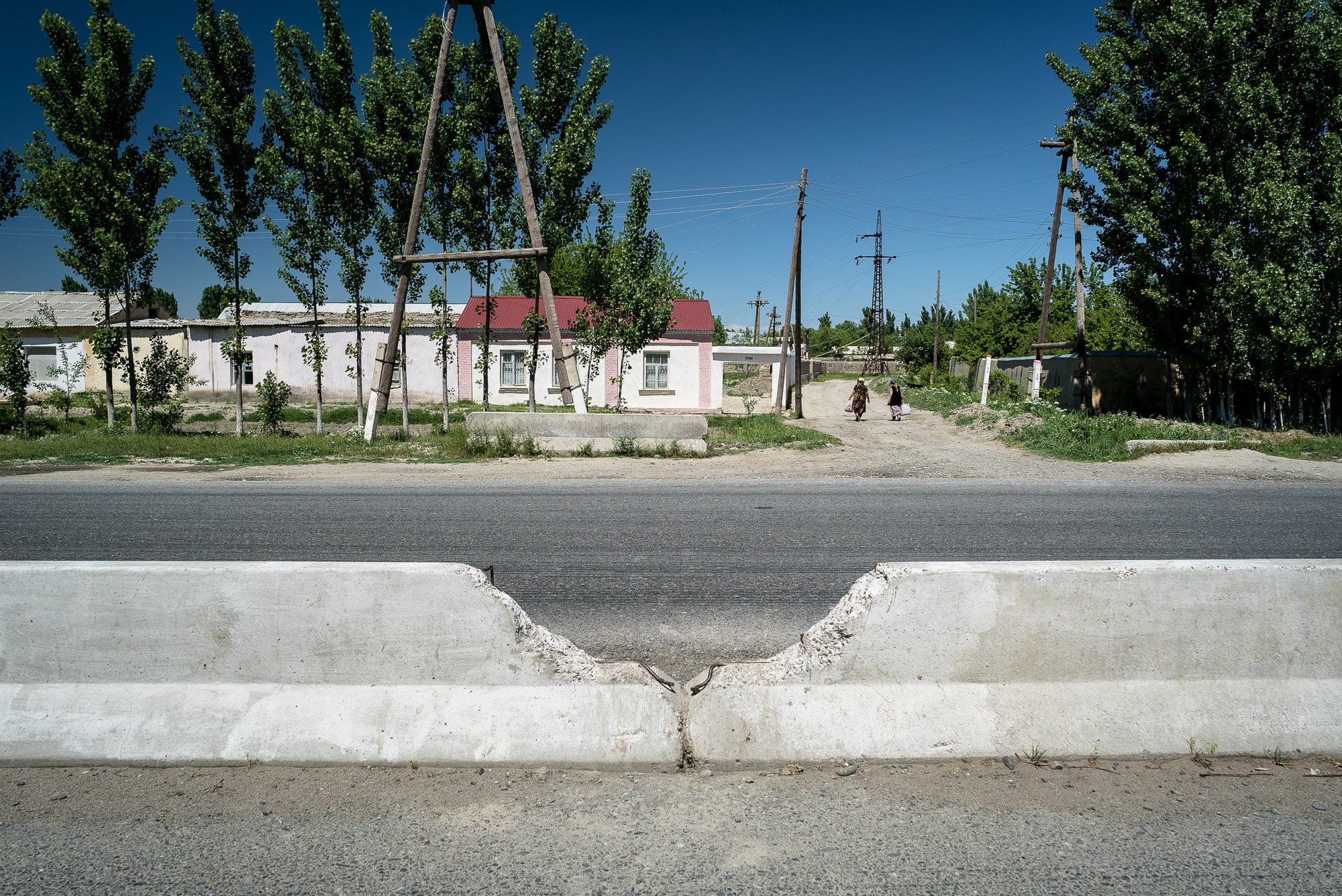 This is what happens so often in authoritarian countries: people find a way around.

I ran into Cathrin and Bryan on their motorcycles: 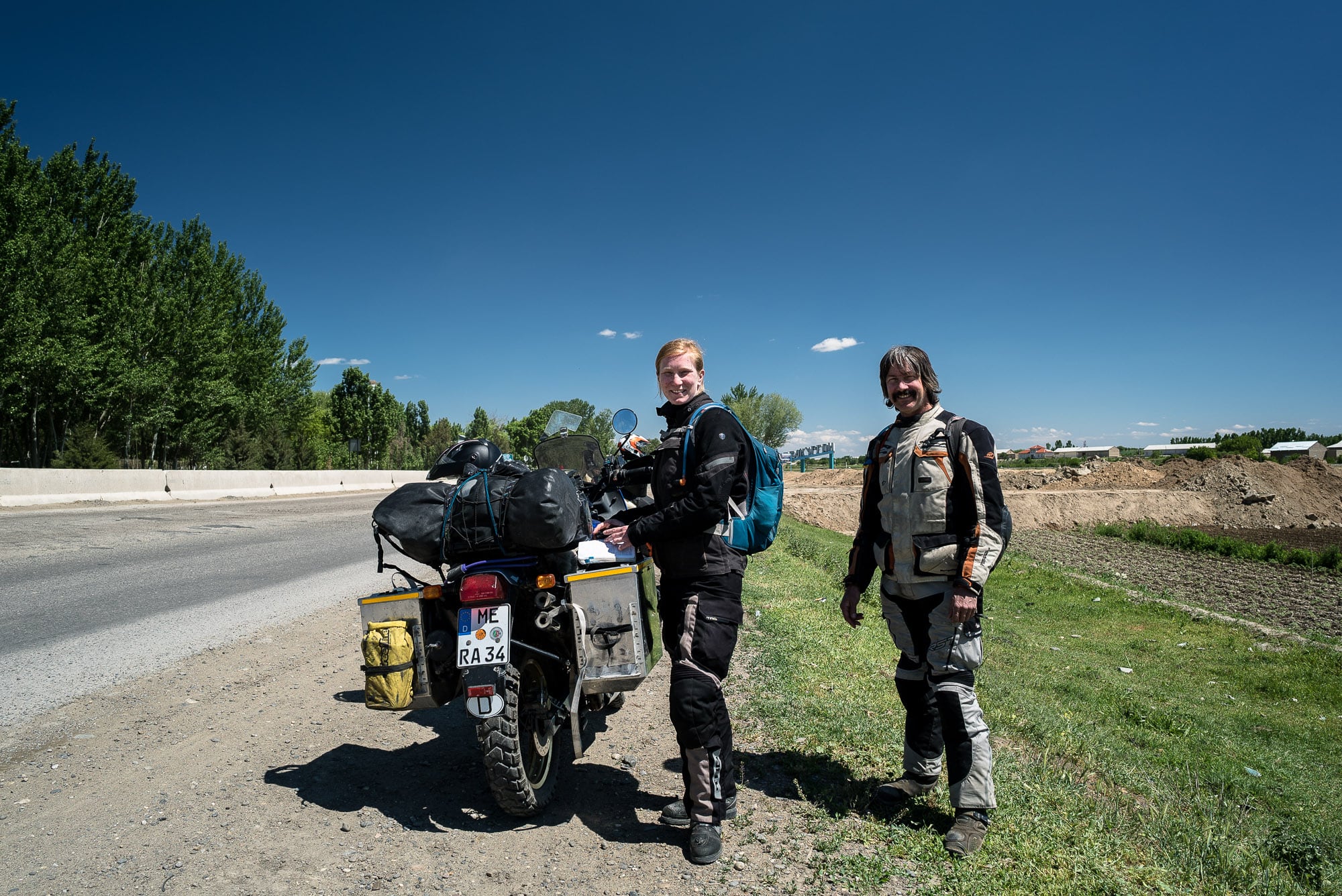 They had come from the opposite direction as I, and they said Turkmenistan wasn’t easy.

Well, I still had some time to think about this problem: 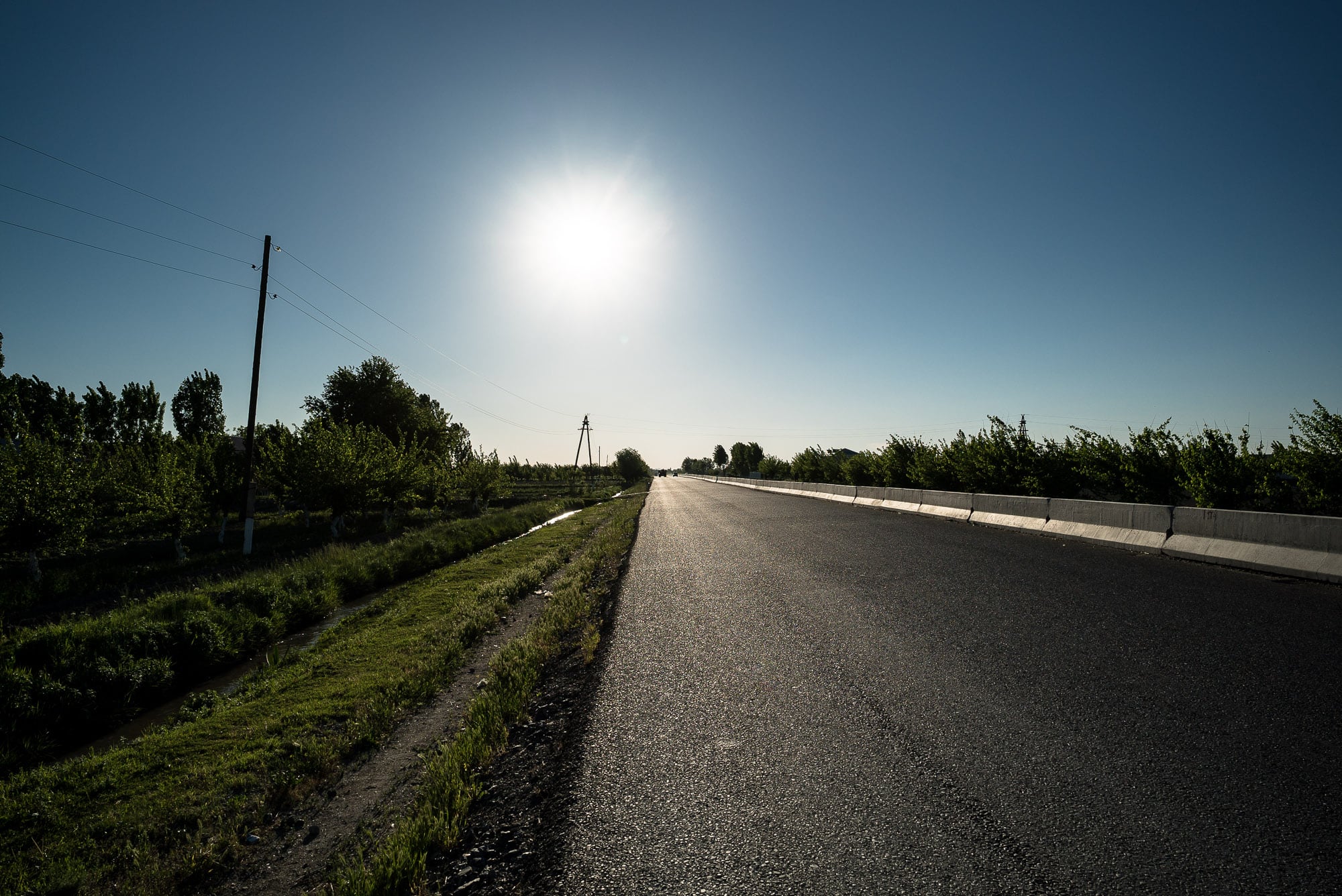 One time this gentleman and I decided to take a photo together, but we failed in a very likeable way: 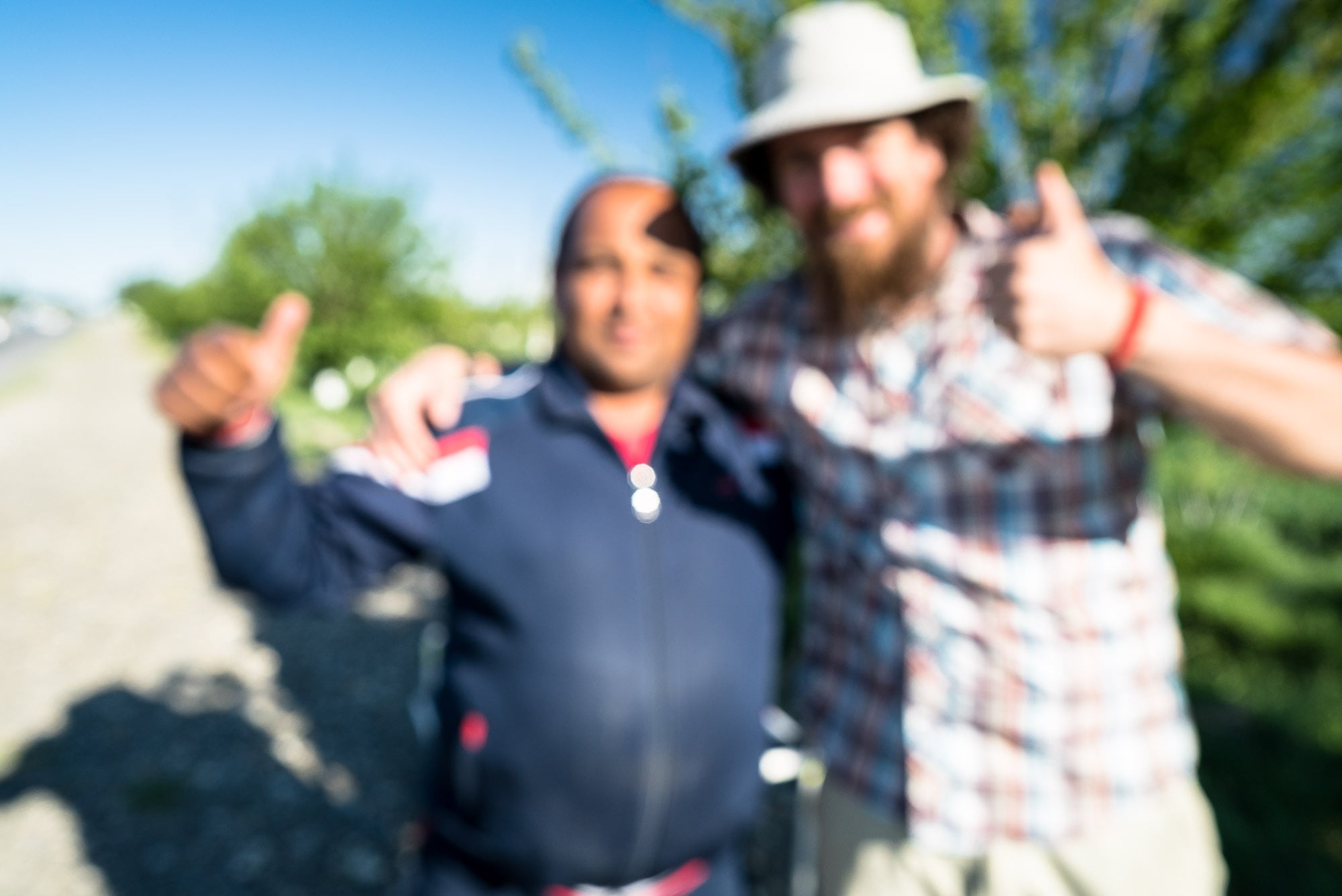 Then there was only more road.

I had figured Mirbazar, 30km from Kattakurgan, was a settlement with a bazar (duh!) and therefore also some businesses like shops and restaurants. I would probably be able to find a place to store the Caboose there.

So I kept on walking, even though I could feel my legs give out from under me: 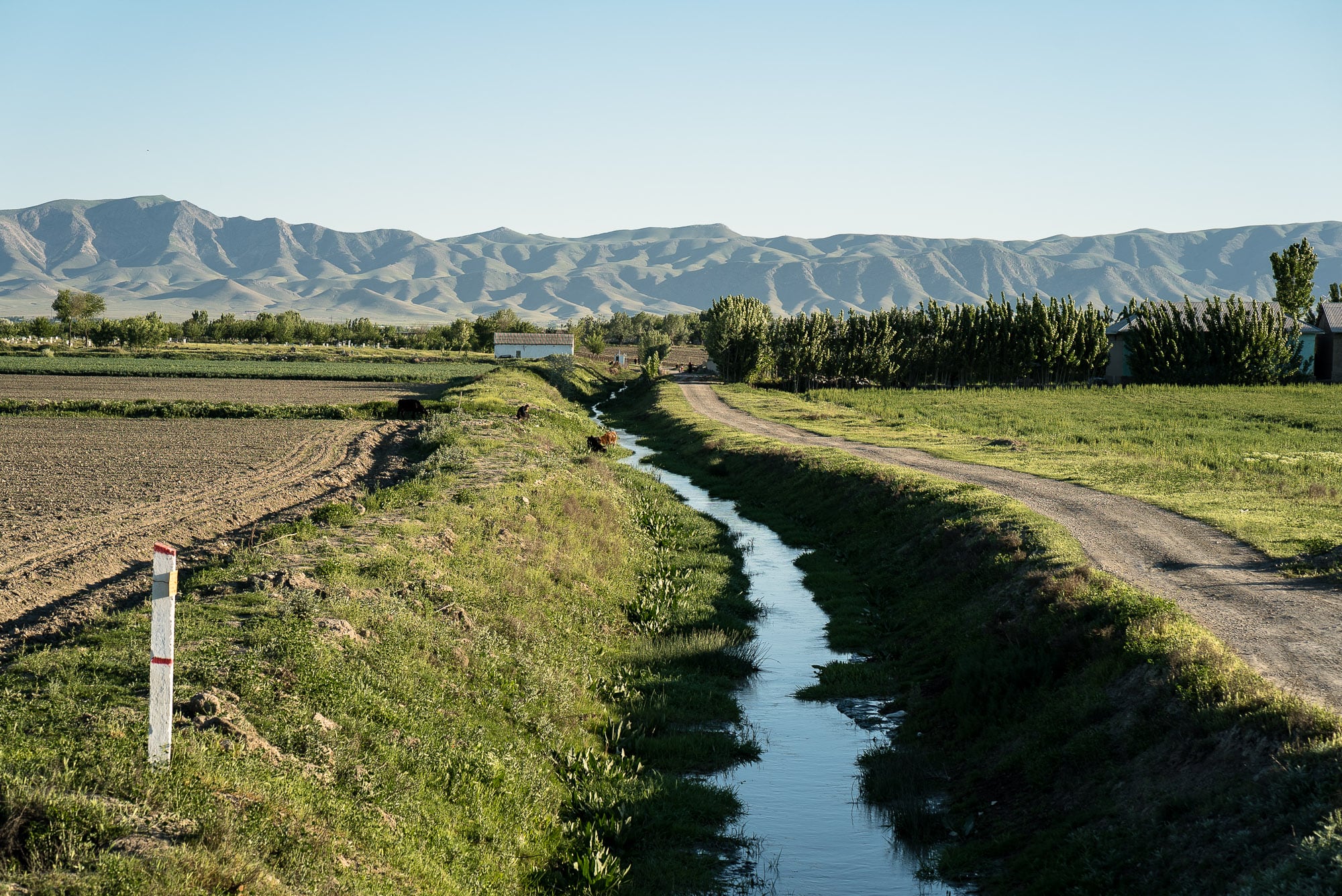 Apparently I just wasn’t used to it anymore.

When I got to Mirbazar, I asked in a restaurant, two liquor shops, a supermarket, a police station, and another restaurant. Nobody would take the Caboose.

Then I just knocked on a door somewhere.

A lady called Firuza opened, listened for a few seconds to what I had to say and then nodded and said: yes, sure.

And then a bunch of young people appeared: 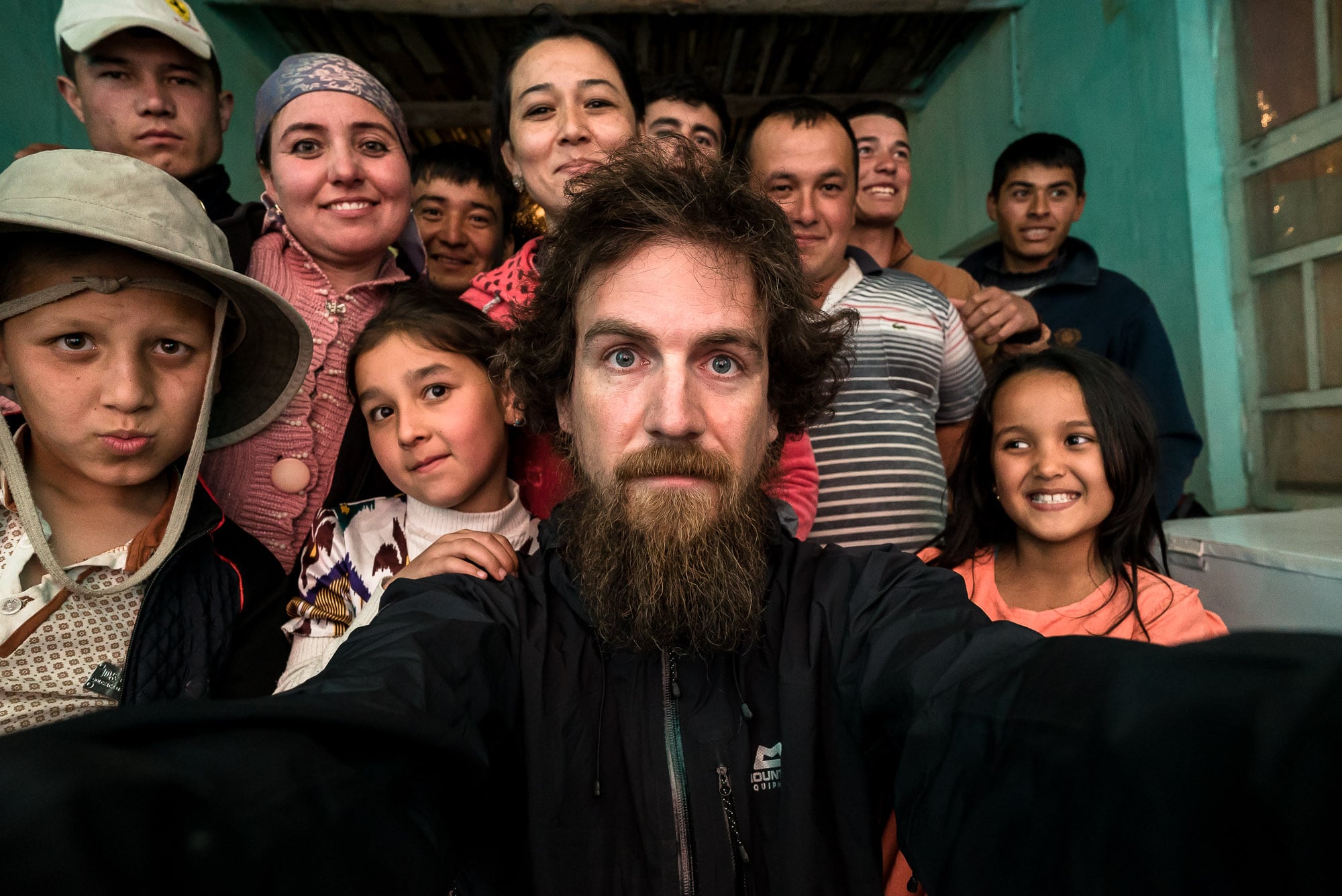 Firuza is the lady on the left with the headscarf: 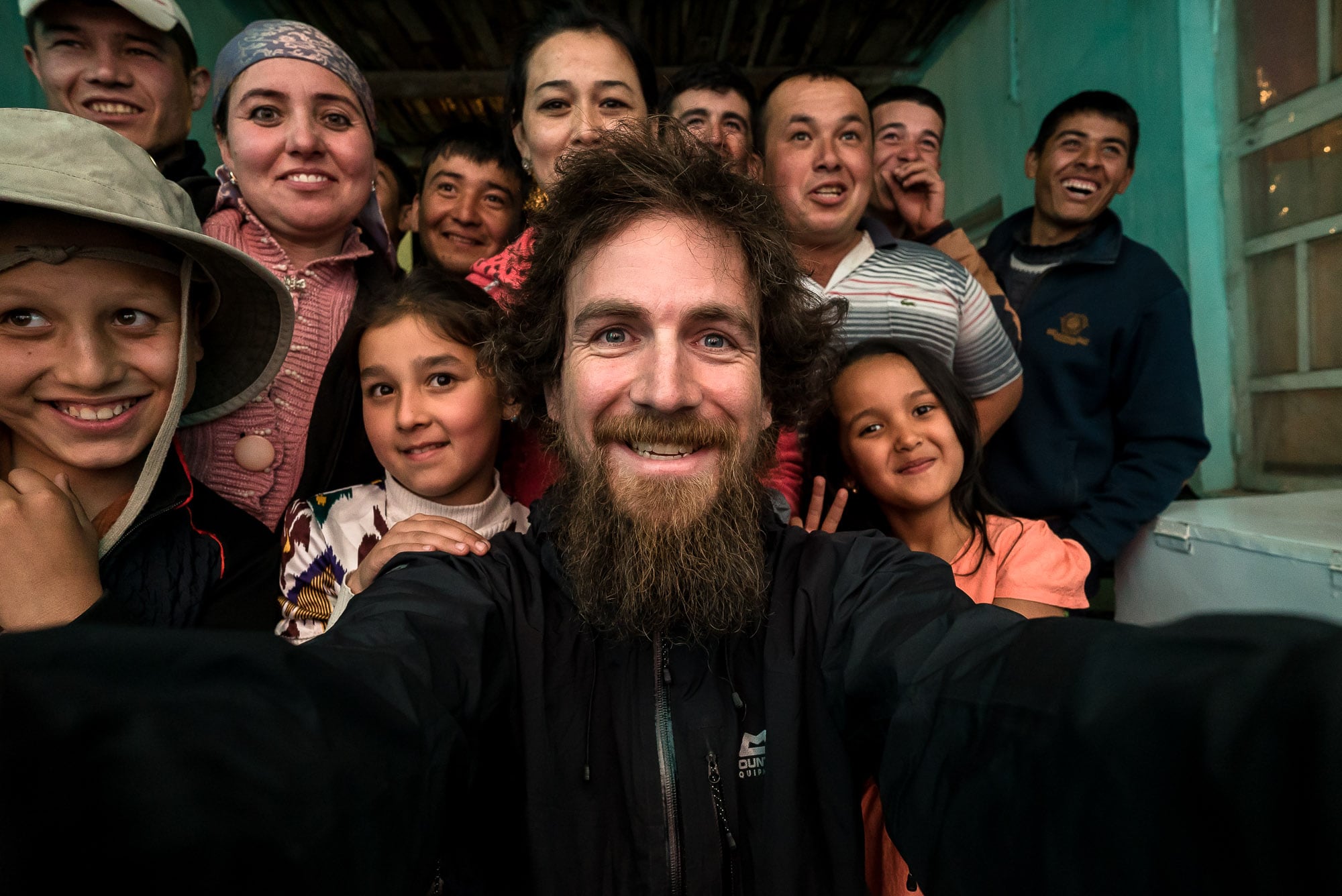 I failed to understand where all those kids had come from all of a sudden, but it was awesome!

Day 729
from Kattakurgan to Mirbazar