Lei Sheng and I left the hotel in Kuytun early in the morning: 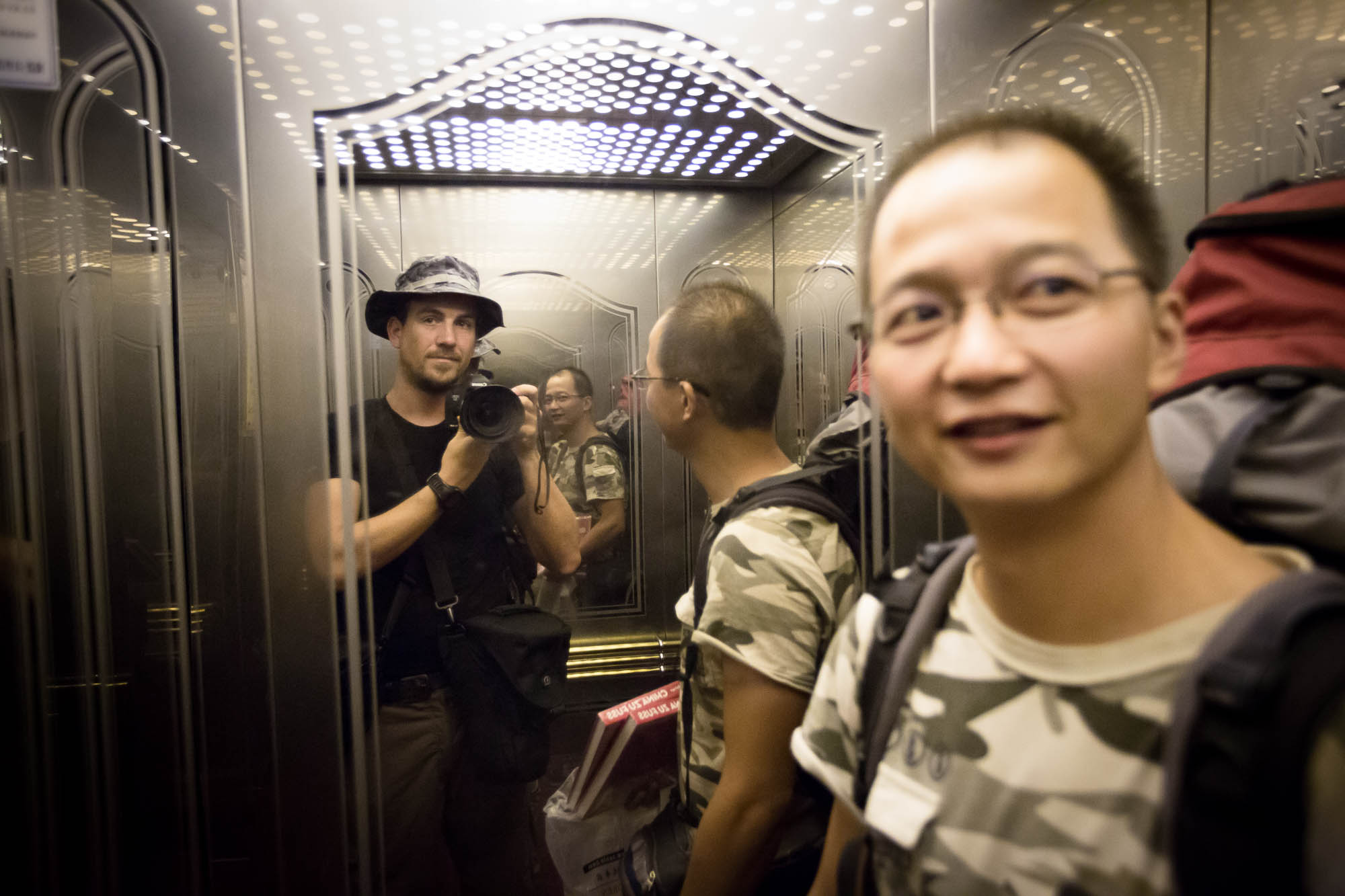 It seemed as though everything and everyone was still asleep. That’s exactly how we wanted it.

Lei Sheng loaded the Caboose in his truck and took us to Usu.

It was the place where I had tearfully parted with her last.

When we got there, we quietly unloaded everything, then we hugged and I started walking. Scared as I was, I walked without looking back. I walked and I walked, until I could see a sign that said I had finally left Usu behind me: 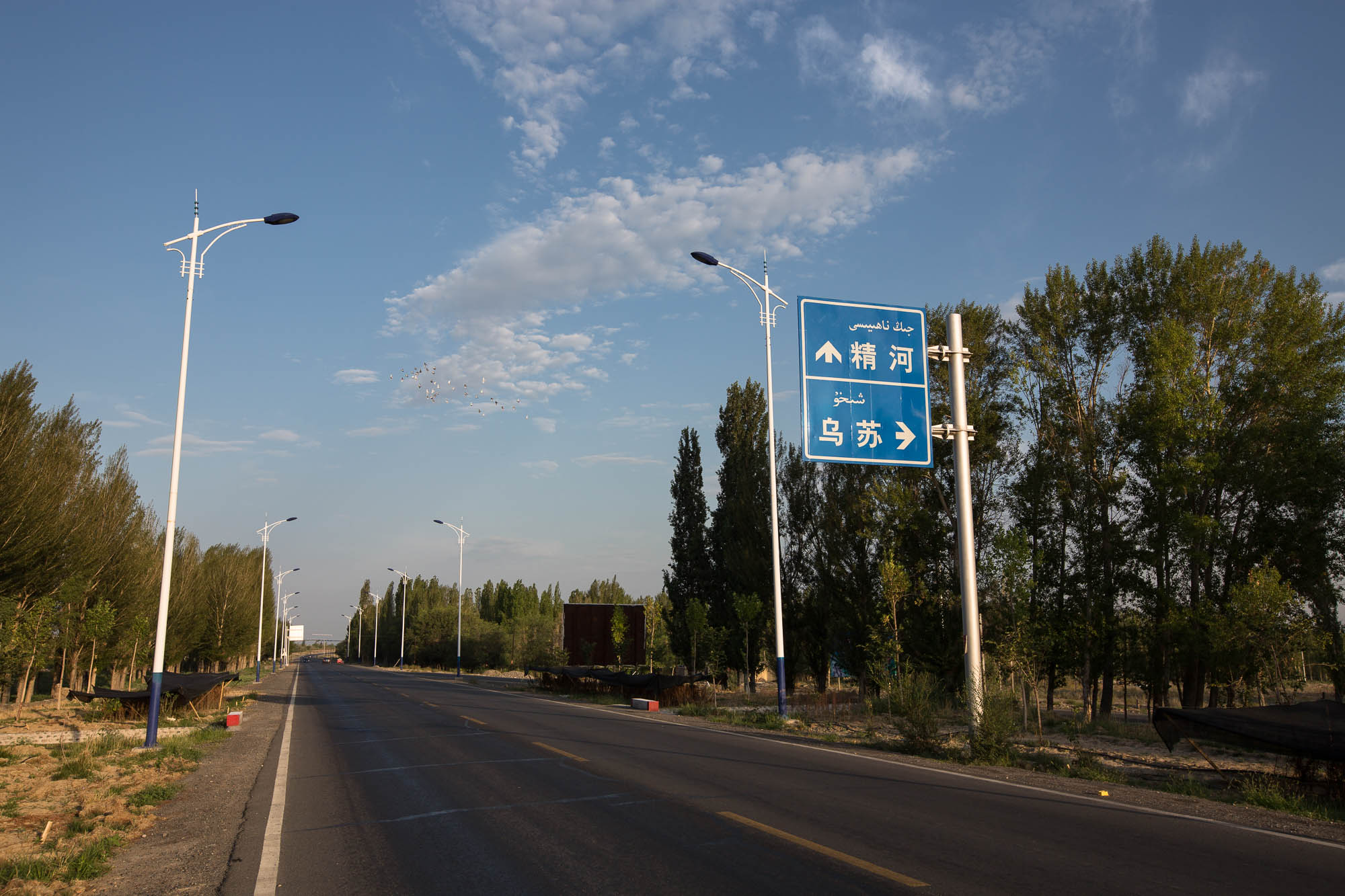 Of course the city with her bureaucratic hassle wasn’t very far. But at least it seemed like it was behind me.

And at one point, it really was.

I could see our shadows, the Caboose’s and mine: 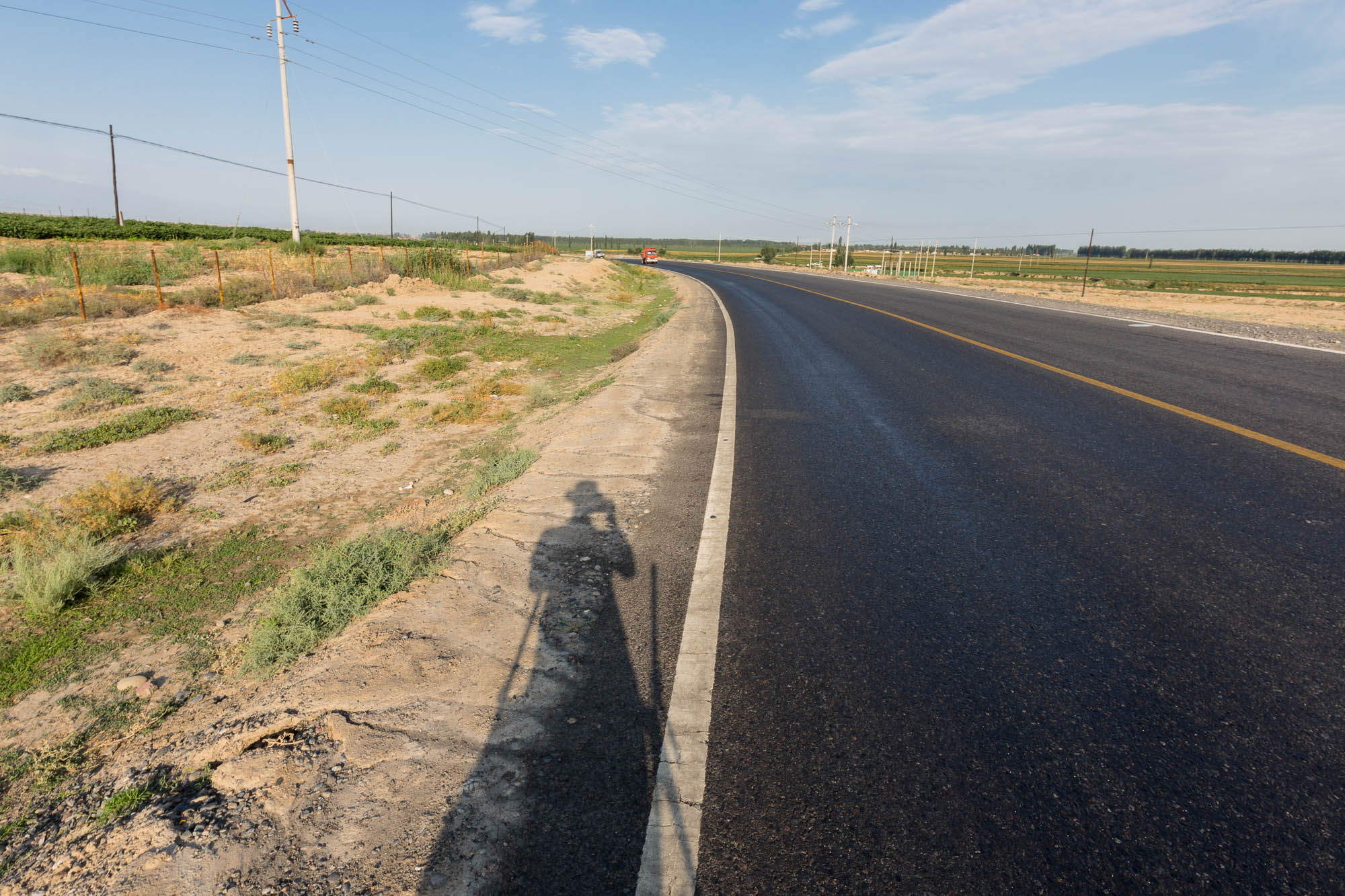 “We’re looking good, old gal,” I said to her, and she responded in the same way as ever: she quietly rolled behind me, the asphalt, the sand and the little rocks softly grinding beneath her wheels. 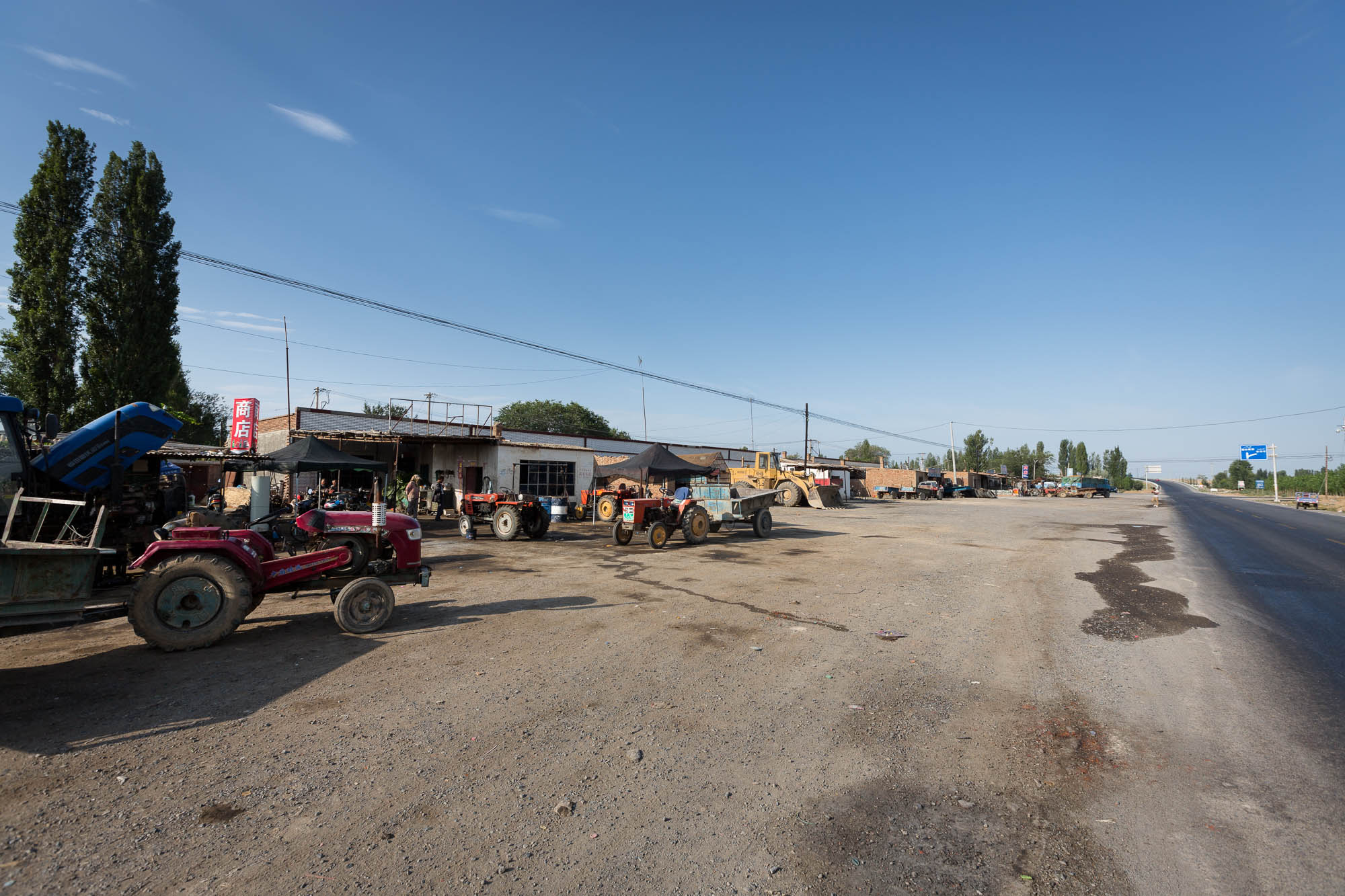 And we saw the high mountains towering in the distance: 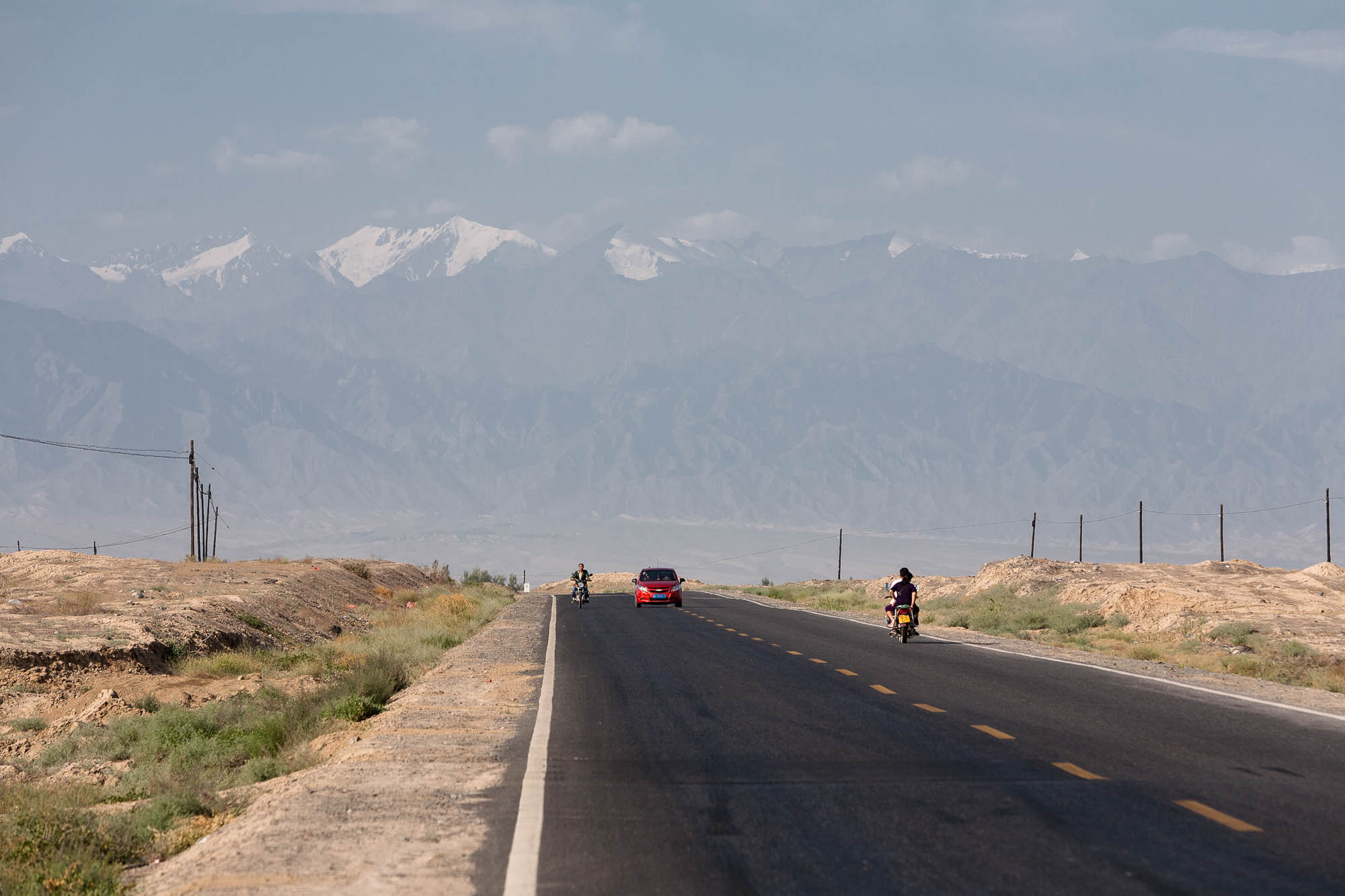 At one point, this guy named Guo 郭 stopped his motorbike and pointed out a shortcut: 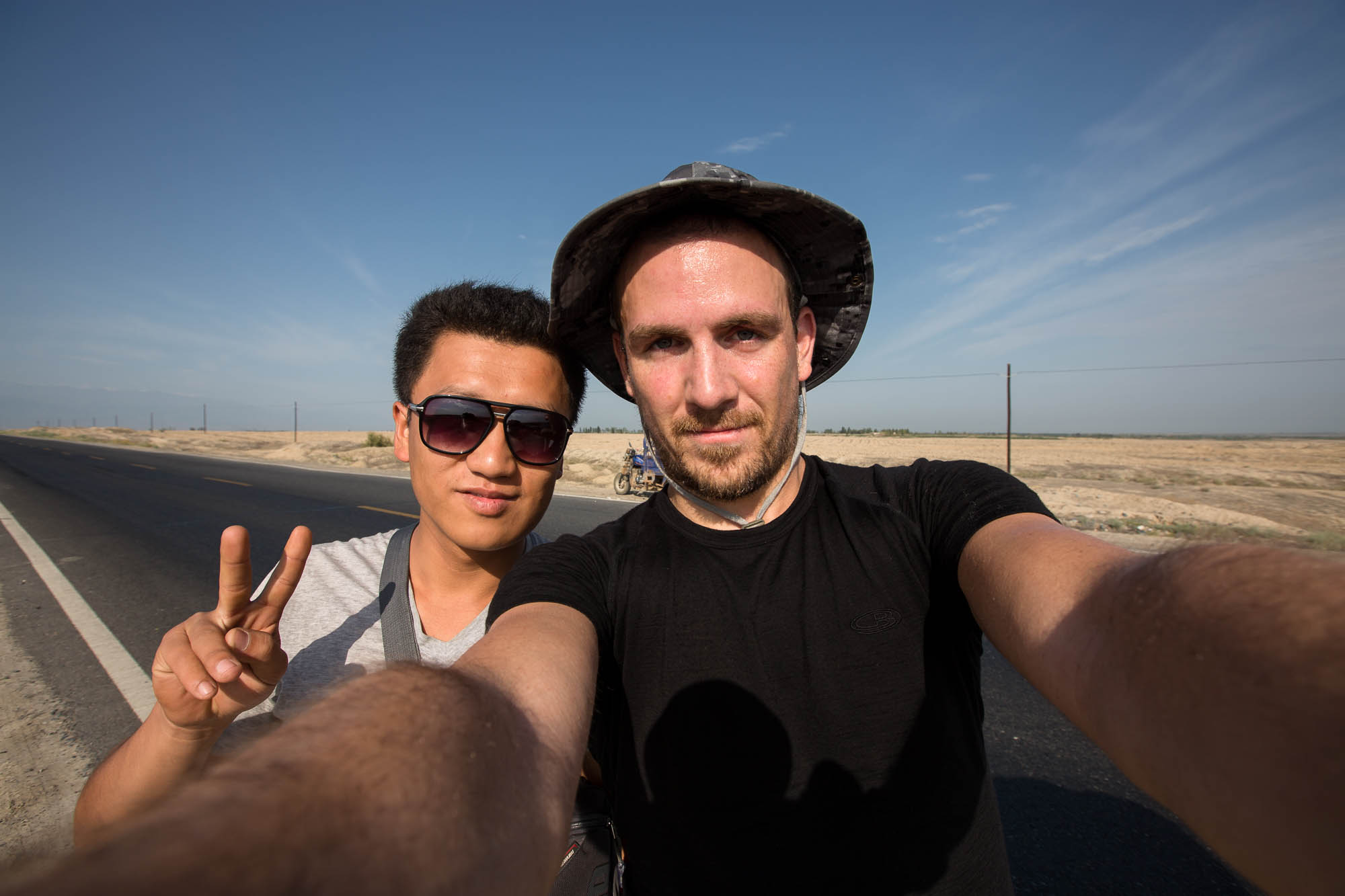 And that was probably the moment when I realized that everything was going to be alright after all. The good people were always going to be the majority.

I had lunch in a small restaurant next to the road: 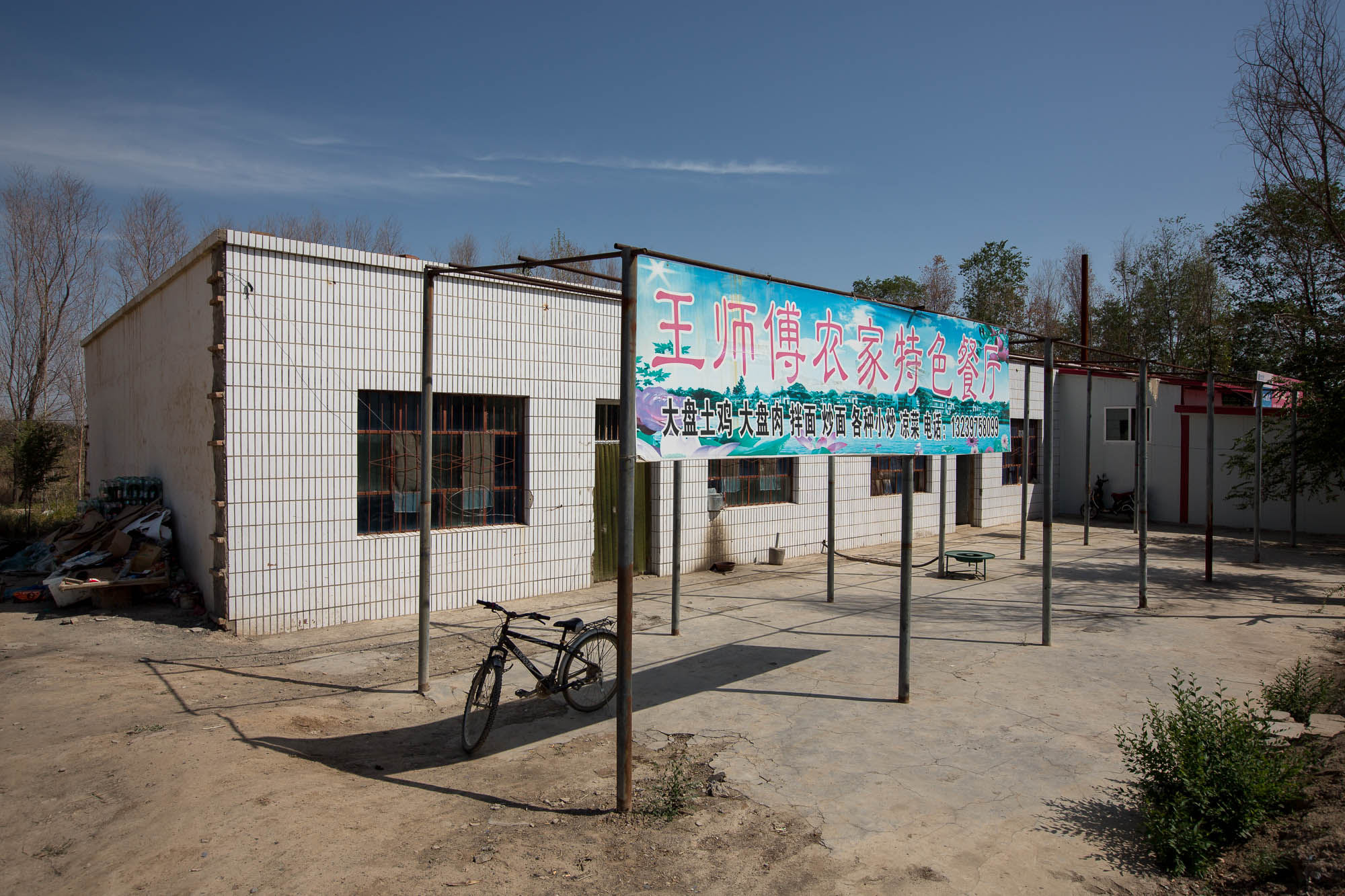 I fell asleep on some chairs in the back room, and I woke up when this little friend showed up in the door: 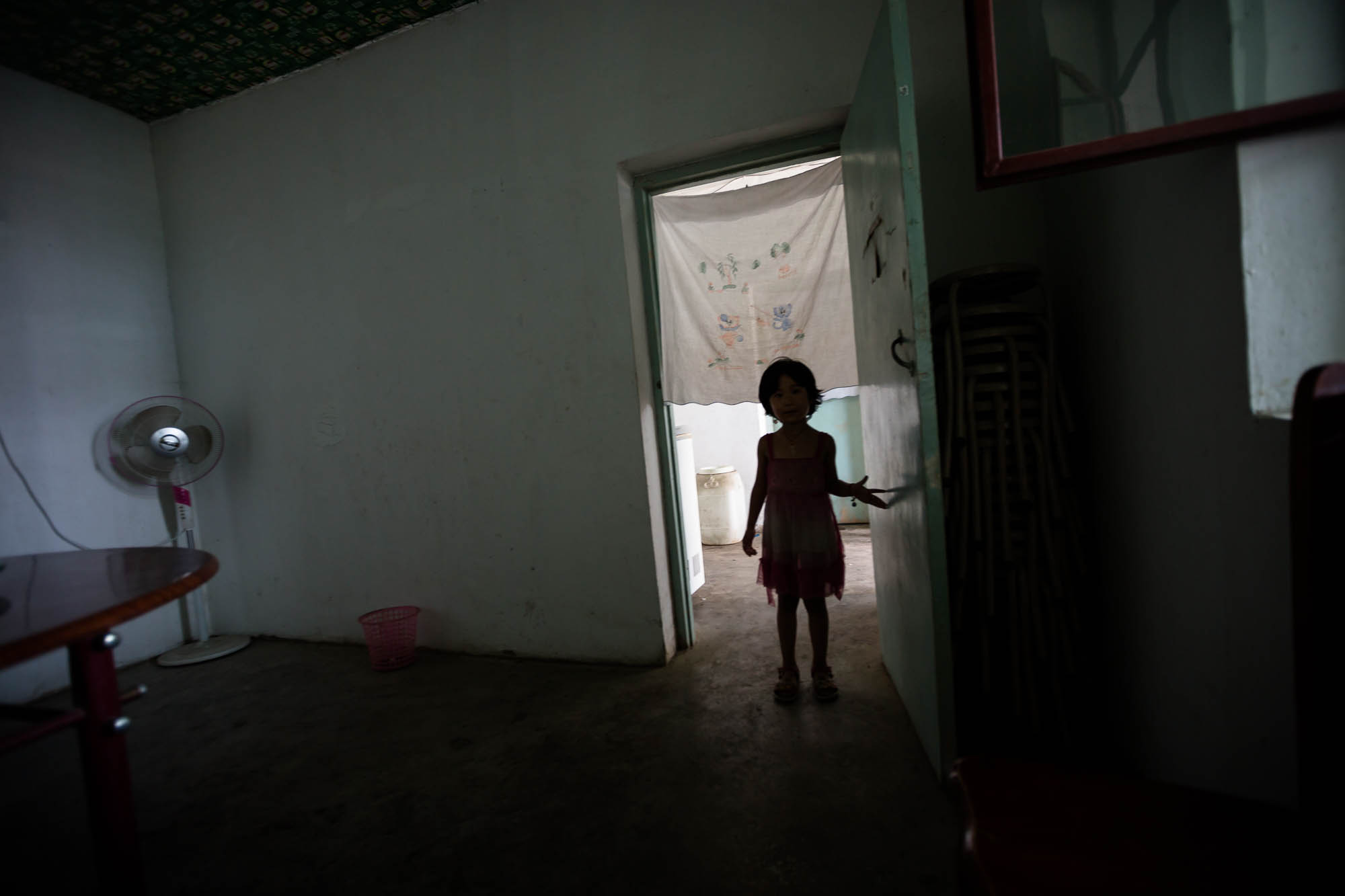 She was four years old: 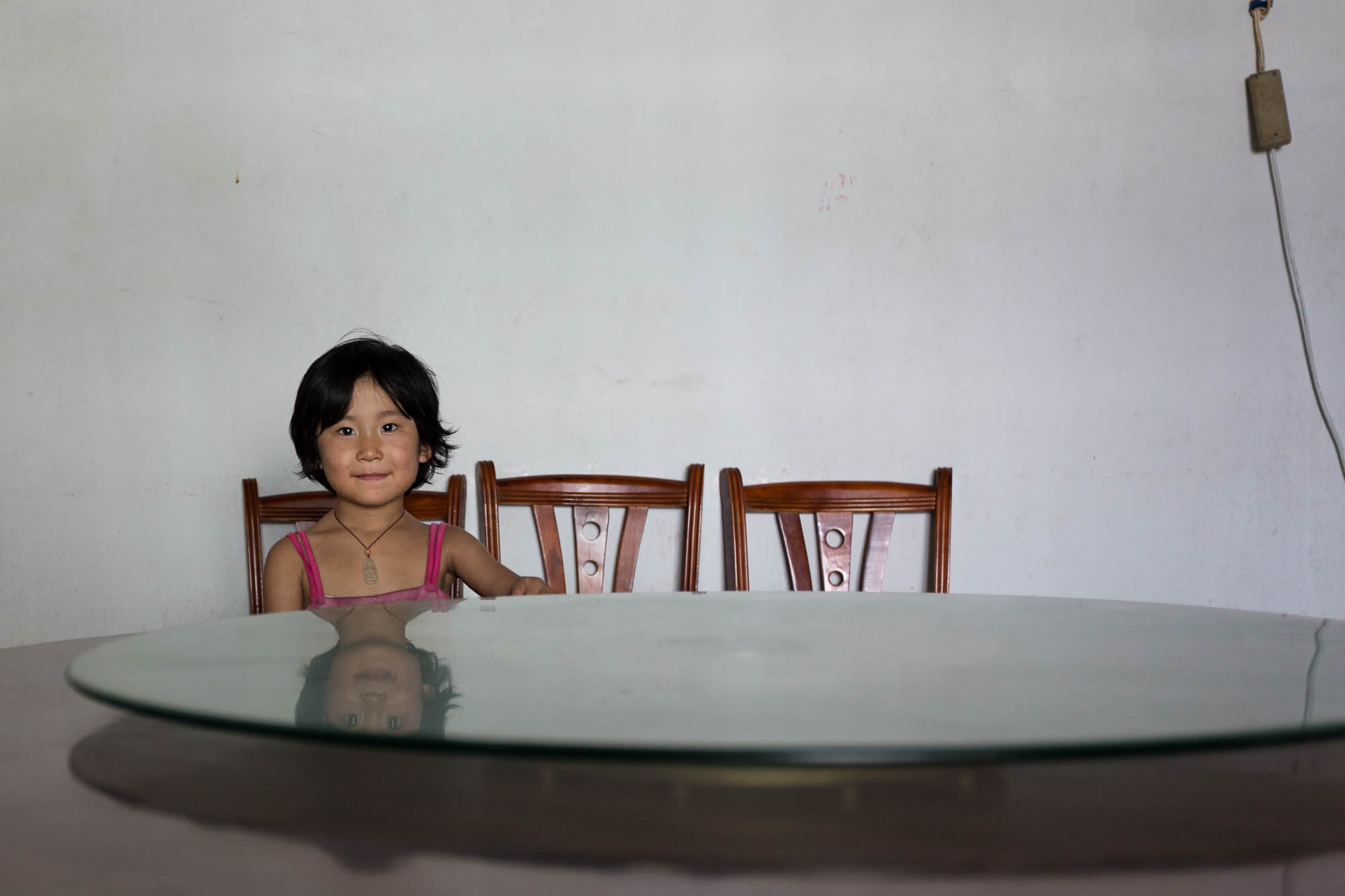 And when I showed her the pictures in the camera and she saw the photo of their restaurant, she pointed at the bicycle and asked me: “Do you know whose bike this is?”

And then she smiled a very cunning smile: “I do,” she said, like she was guarding a well-kept secret.

I passed through sunflower fields: 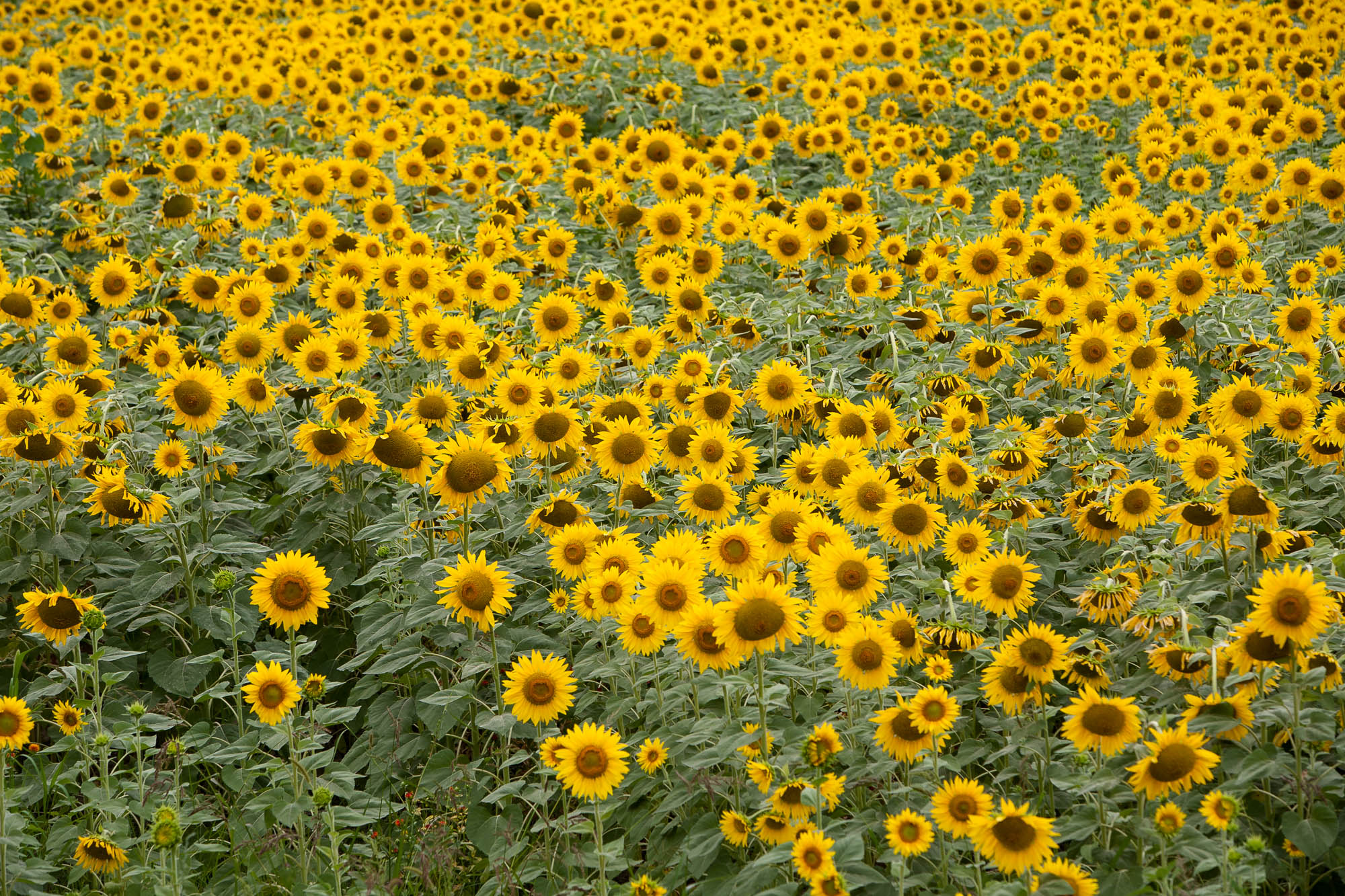 At one point, I was told to leave the regular road and get on the freeway, because a bridge had been washed away by a sudden flooding of the river, and only the freeway was still operating: 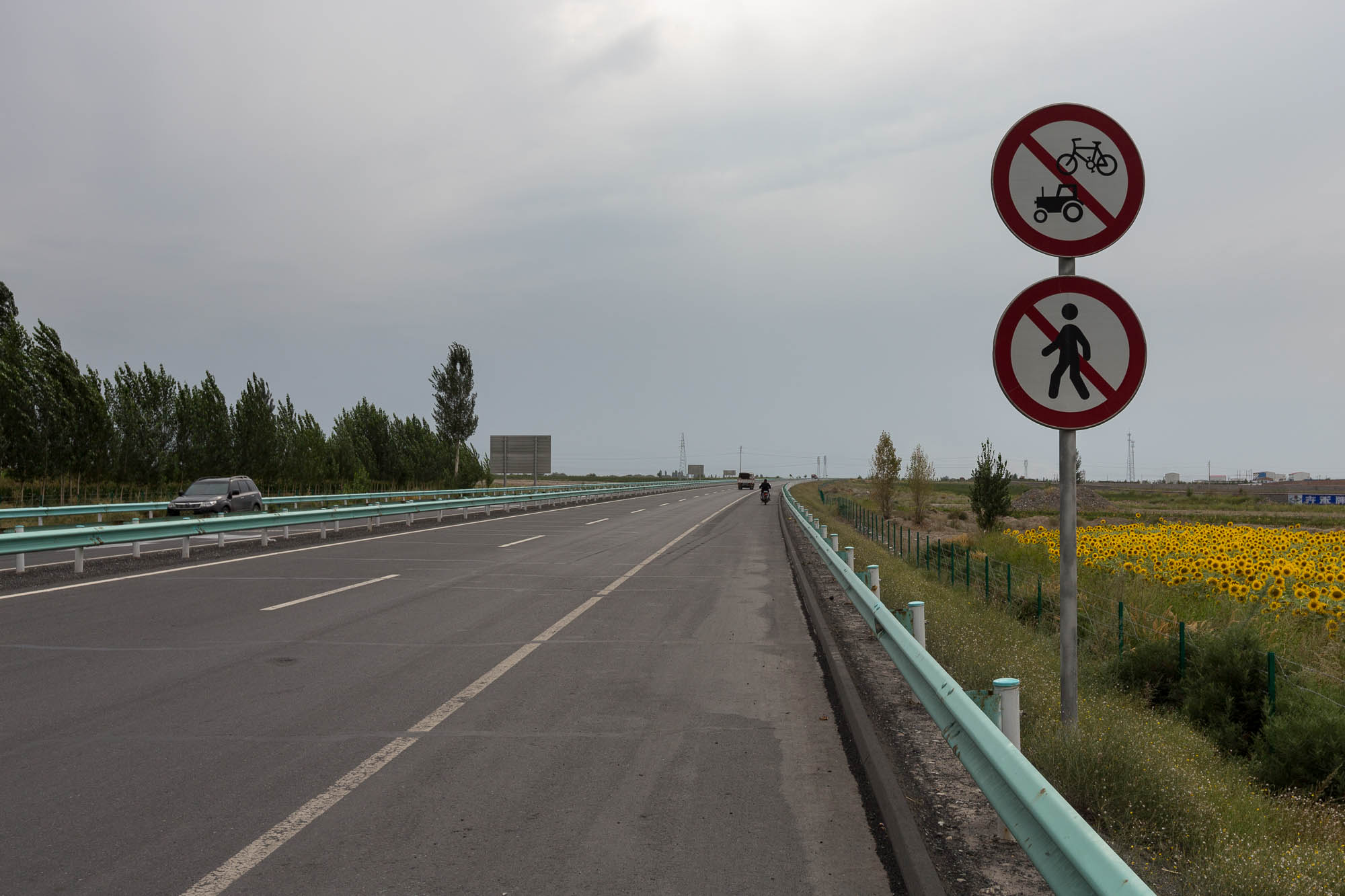 I didn’t like the thought of walking around up there, but there was no way around it.

When I got to the bridge, I could see what had happened: 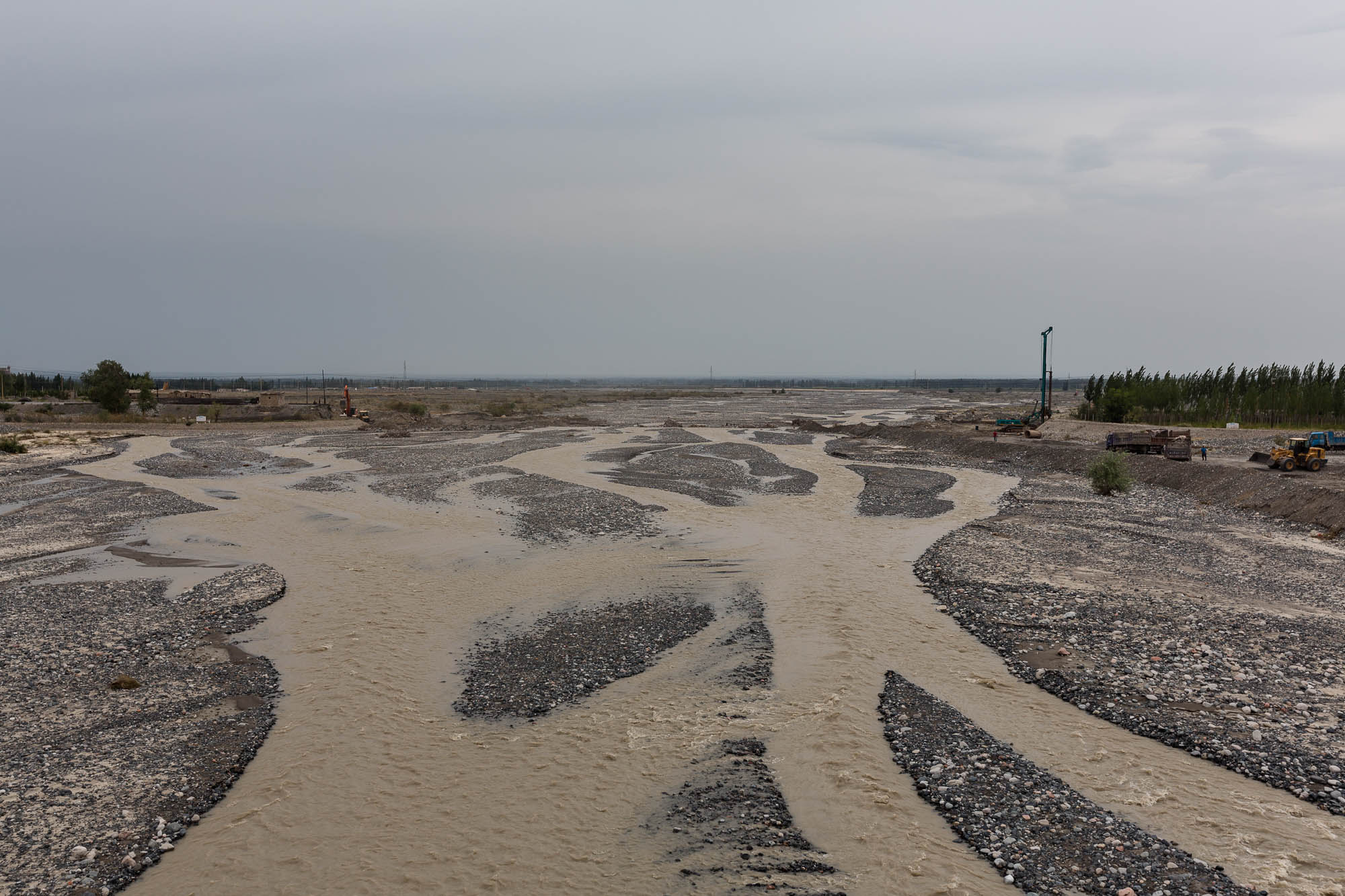 The bridge of the old road was gone and some people were already there, trying to repair it: 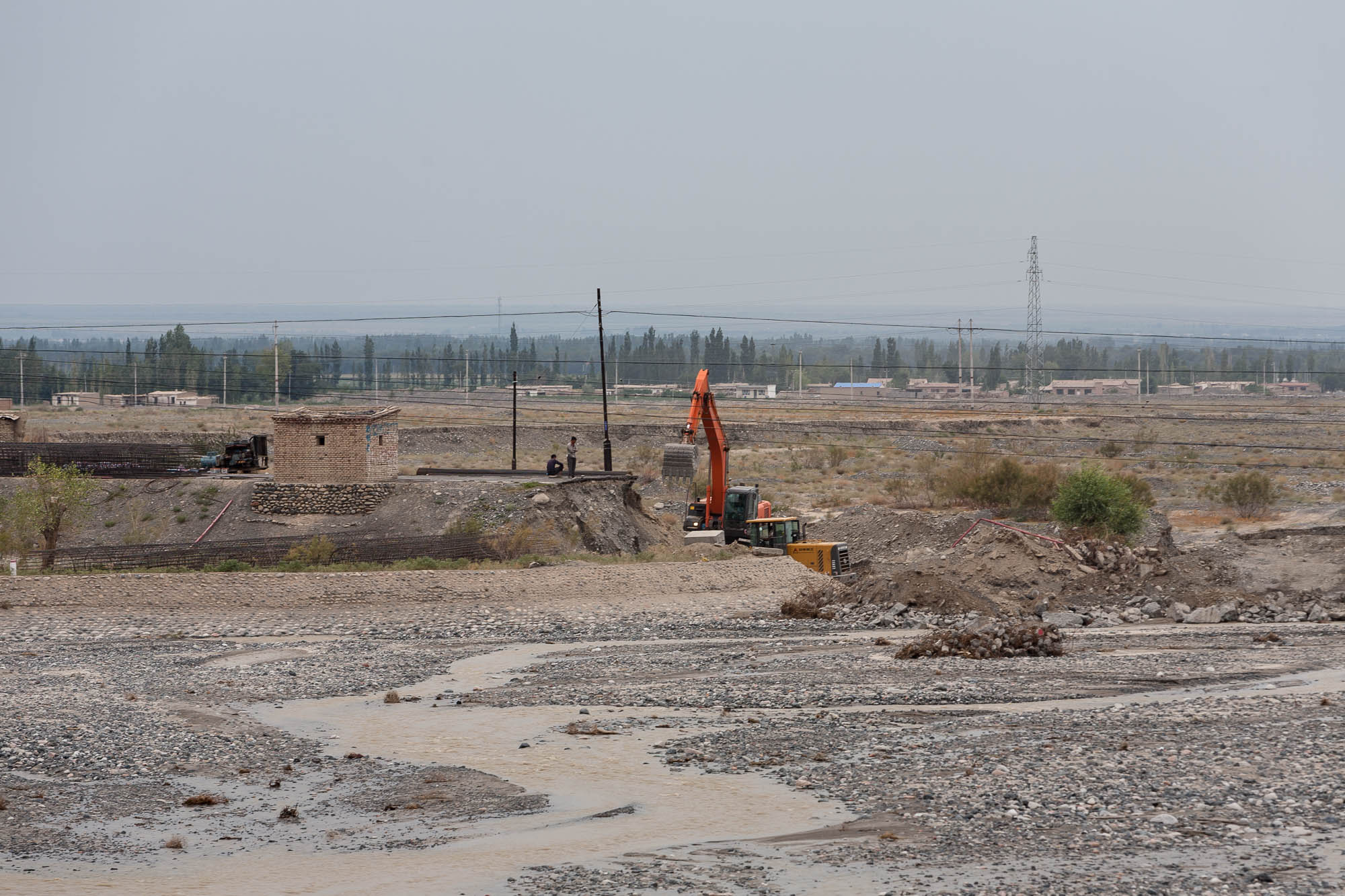 That night, I walked until rain fell. Then I stopped at another restaurant and asked for a room. I got one. I didn’t get a door key though, and the place seemed rather busy, so I basically stayed in my room all evening.

I did what I had always done: 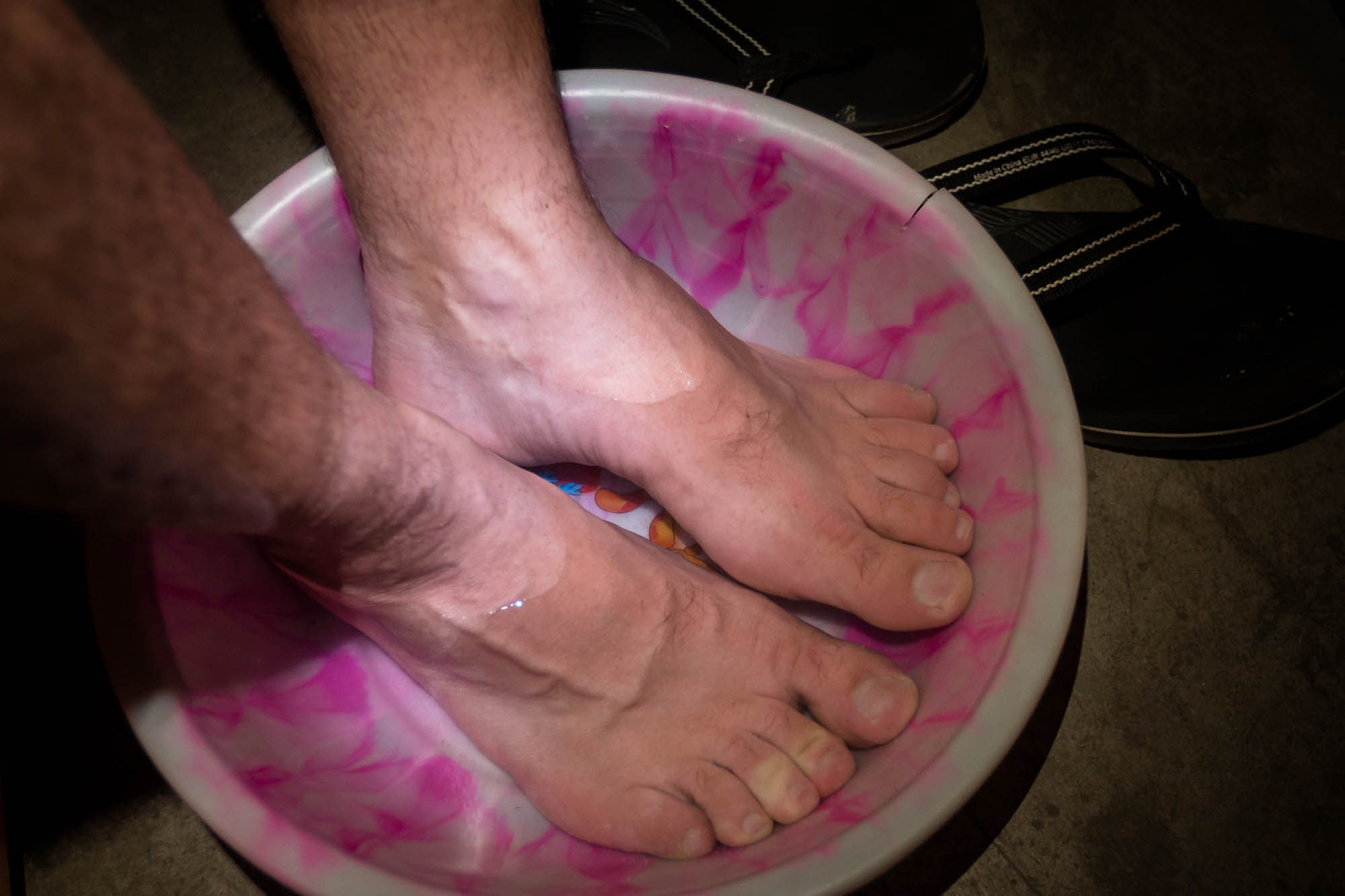 I washed my feet in the bowl.

Then the whole place went dark, because the electricity had gone out.

I stretched out in my sleeping bag, and I closed my eyes. I had walked 40k today. I had left 乌苏. I had seen sunflowers, there had been friendly people to talk to, and the snow capped mountains had been greeting me from the horizon. The Caboose was there.