This post is about a 12km walk from Wangdu to Dingzhou. I see a bunch of dogs in cages and try to have a conversation with a kid.

The reason for today’s title is right here in the first picture. 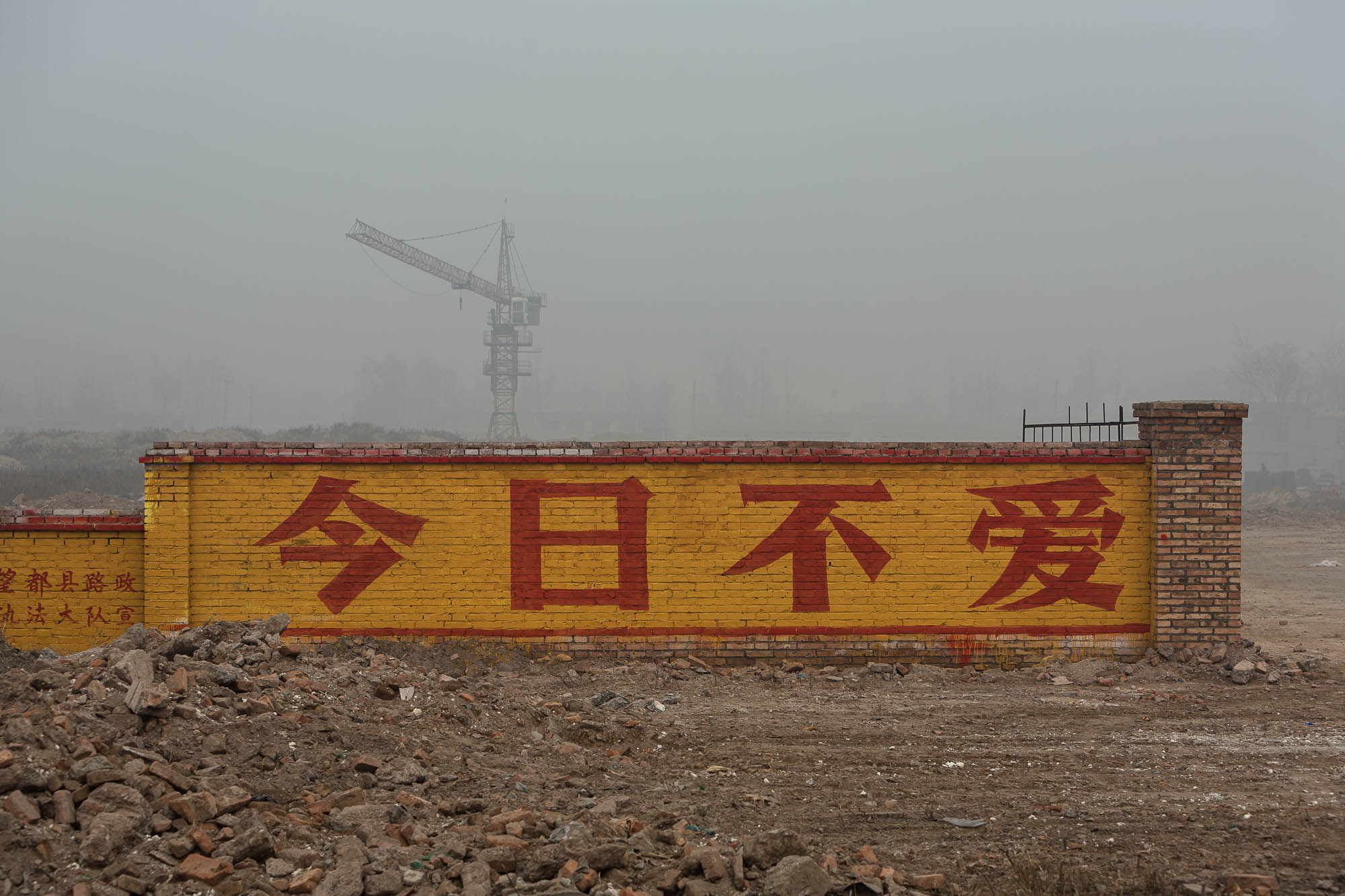 NO LOVE TODAY 今日不爱 – the translation is a bit rough, I know. Actually, this is supposed to say something like: “if you don’t love your roads today, there will be no roads tomorrow” But now all that is left is no love today.

I’m sitting in my hotel room as I am writing this, with my shoes on and my jacket and my hat, and my hands are freezing. I feel like an idiot. A big idiot. I somehow managed to find the only place in town that doesn’t have heating.

And I’m thinking, was there really no love today? Basically the only thing I did is walk, walk, and walk.

The fog was still there. It wasn’t as bad as yesterday, but still. And I am starting to wonder: is it maybe just some sort of industrial smog?

I saw something nice next to the road. 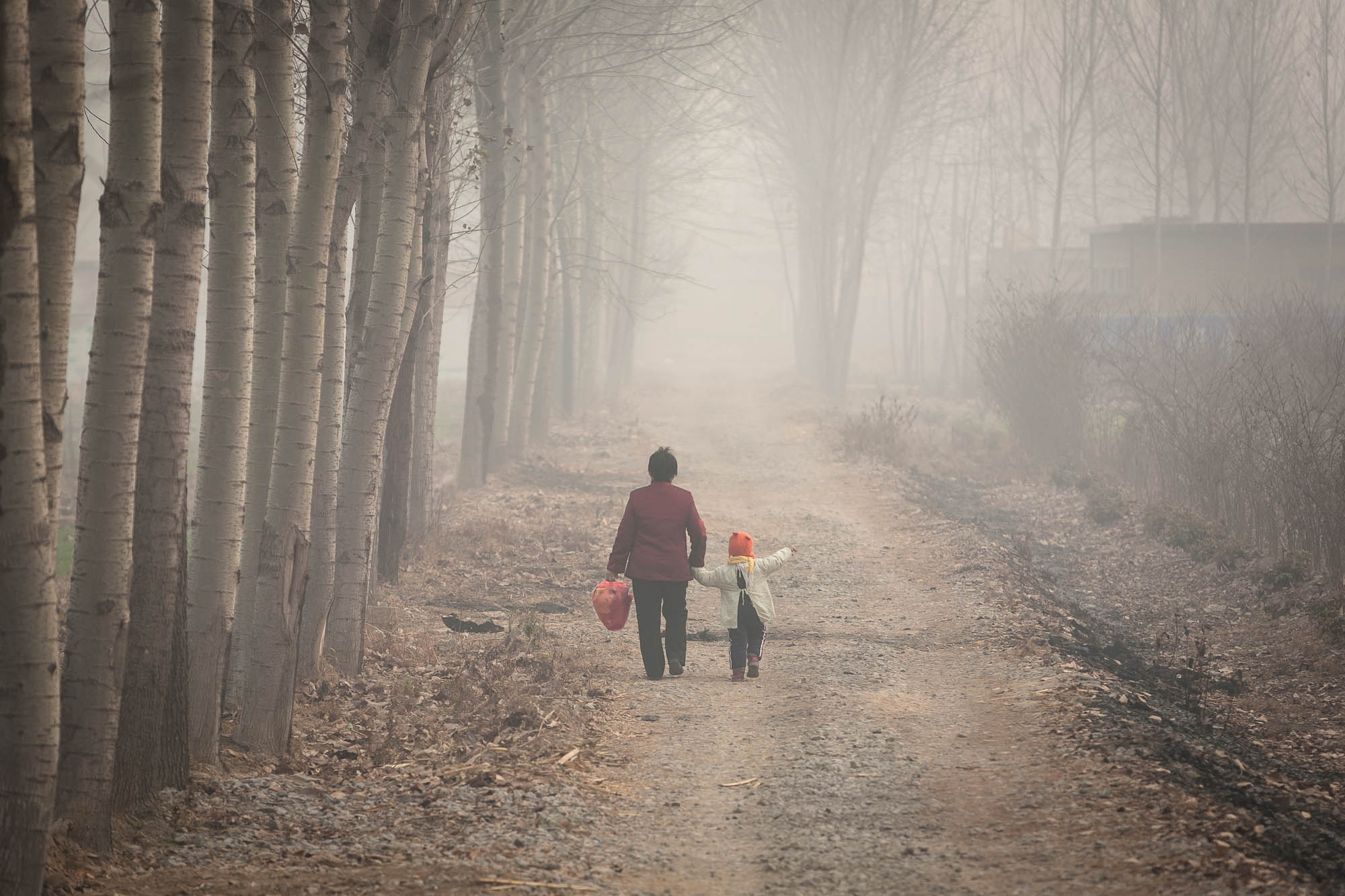 The old and the young, walking home, through the fog. I liked them.

a place for pets?

But then there was this place with absolutely NO LOVE. 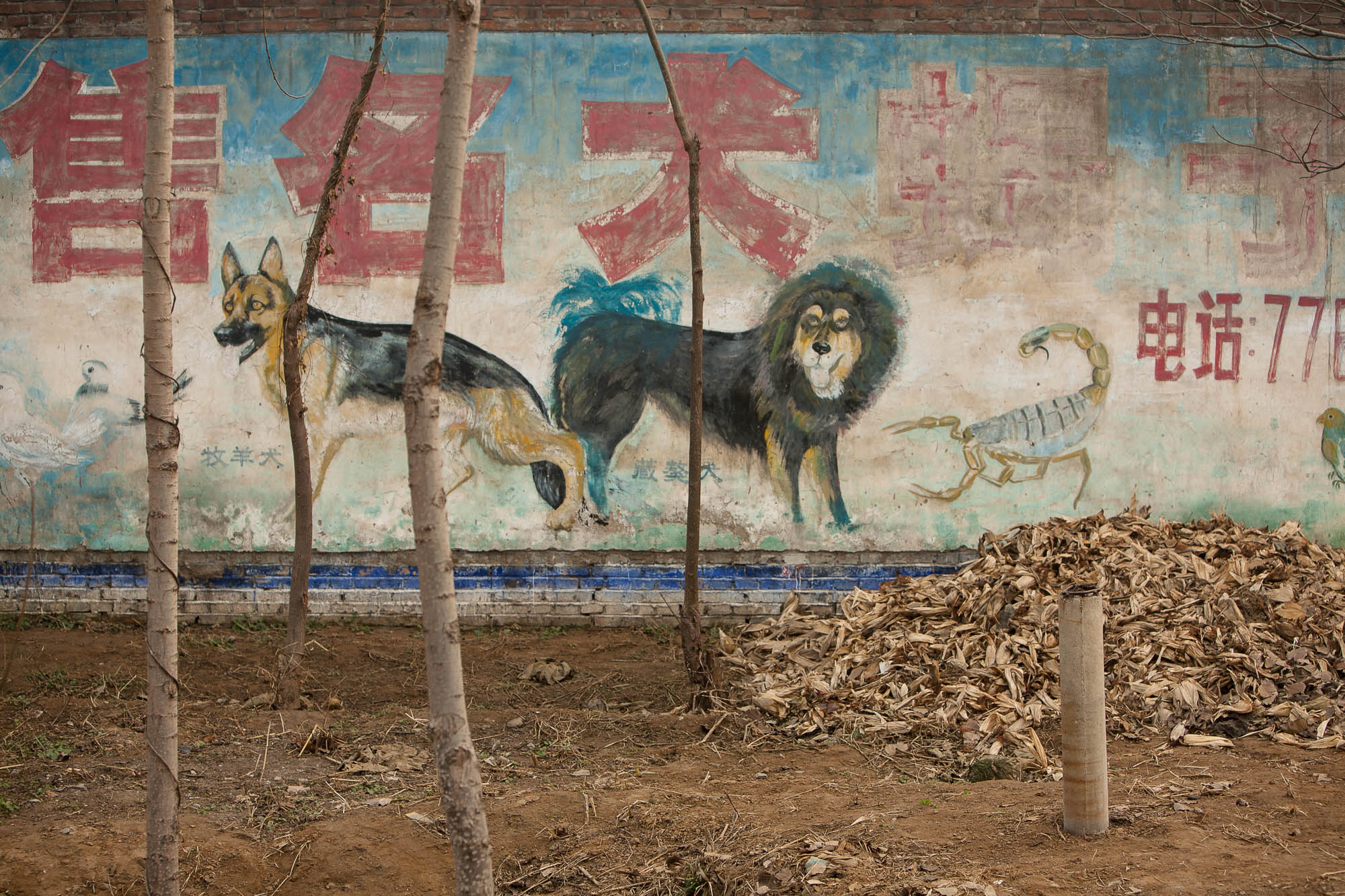 They apparently sold pets: birds and dogs and scorpions.

I took a look inside. There were no scorpions and no birds. But there were dogs, a lot of dogs. They were locked up in tiny cages. When one of them noticed me and started to bark, they woke up one after the other and looked at me from bleak eyes. 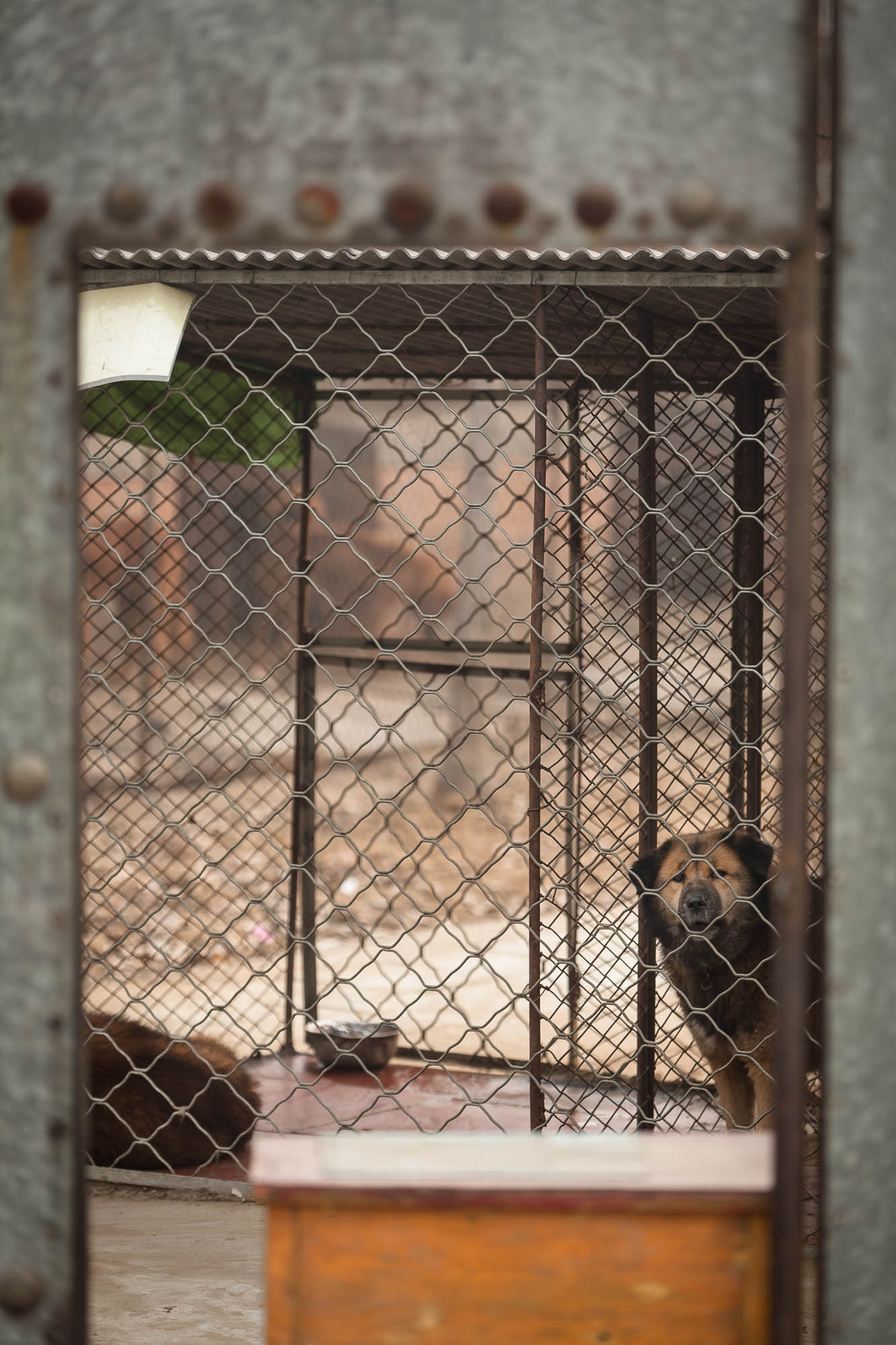 And then they all started barking.

I walked fast. It wasn’t just about finishing the walk from Wangdu to Dingzhou. I also wanted to put some distance between that pet market and me. I walked and I walked. And the sound of the barking quieted down behind me.

how that conversation went

I was still thinking whether or not I should have stayed around to take more pictures of the misery and find out what that pet place was actually all about, when I ran into a little guy. 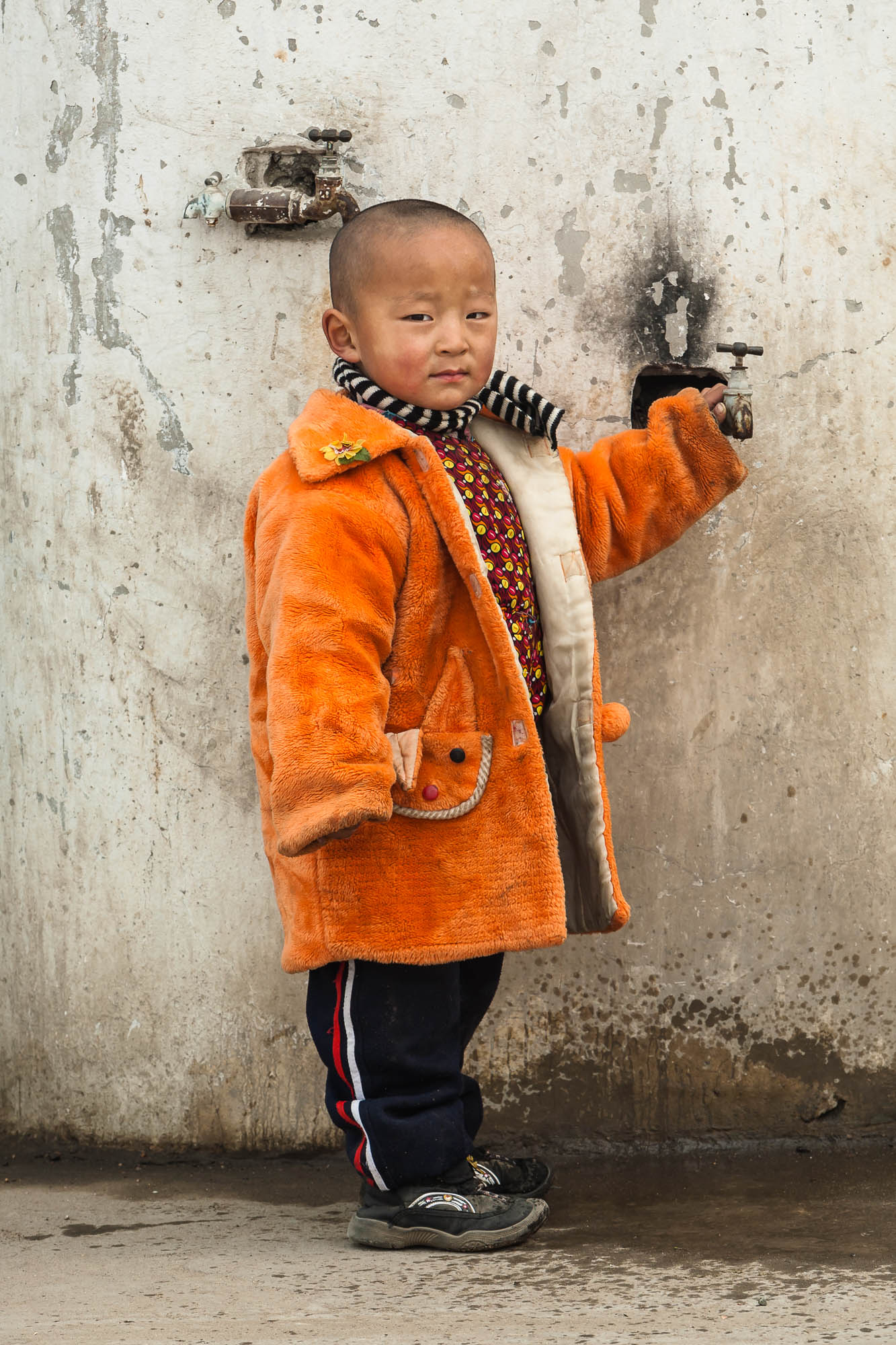 He was trying to get a drink from a water faucet, but when he noticed me, he suddenly froze up.

Neither of us moved, only the shutter of my camera did.

After a while he apparently decided that I wasn’t so scary after all, so he started a little conversation with me.

Chris: “What? You go to school, little friend?”

little guy: nods and waves with his hand.

Well, okay, we didn’t really understand each other in some aspects.