I guess some of you already knew what was going to happen, with the Caboose and all…

I was going to take a few days off this summer to pick up where I left off and add a tiny bit of length to the long red line. 😉

Well, this morning my Uncle Shen picked me up at the hotel, we loaded everything on the Caboose, he got on his bike and I got on my feet – and off we were, into the unknown!

It felt weird and nice and exciting to be back on the road, and this time I was even able to decipher some of the many Russian signs that cover this city: 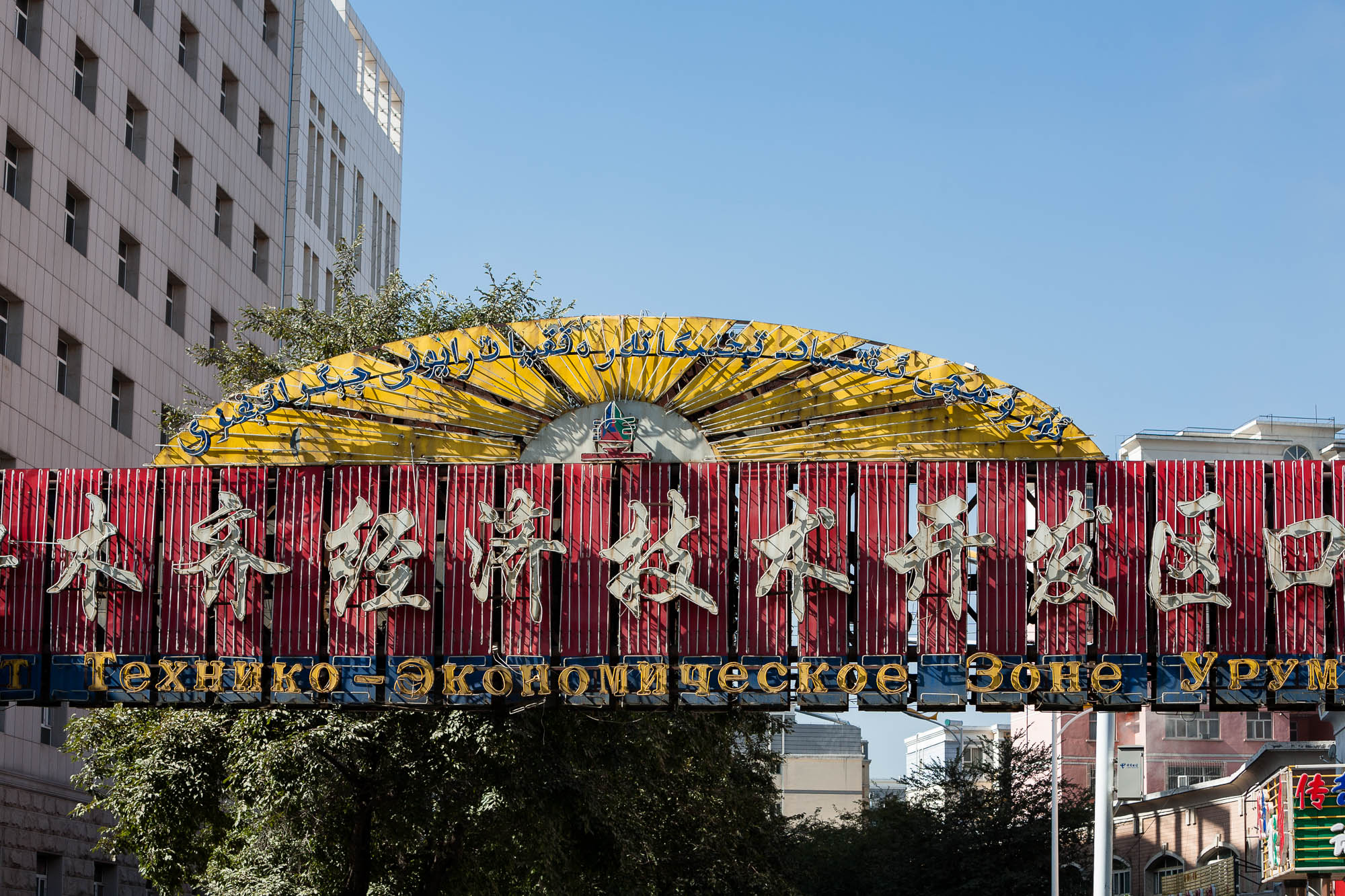 We steered through some pretty bad traffic, then we got on the road leading West, in my original direction: 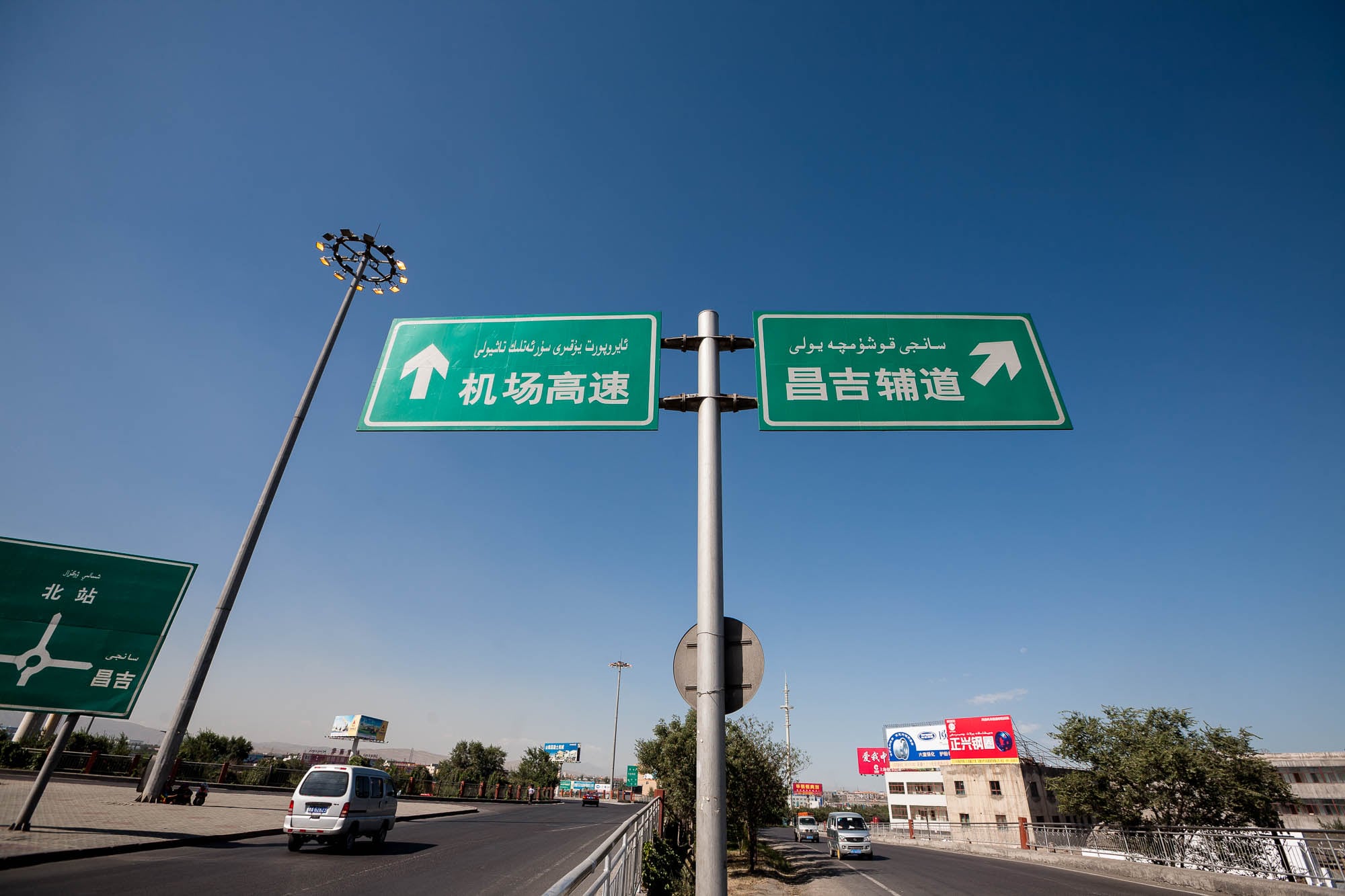 Airplanes were thundering across our way as we made it past the airport, and I pondered once more about the difference in traveling speed that humans meet today: 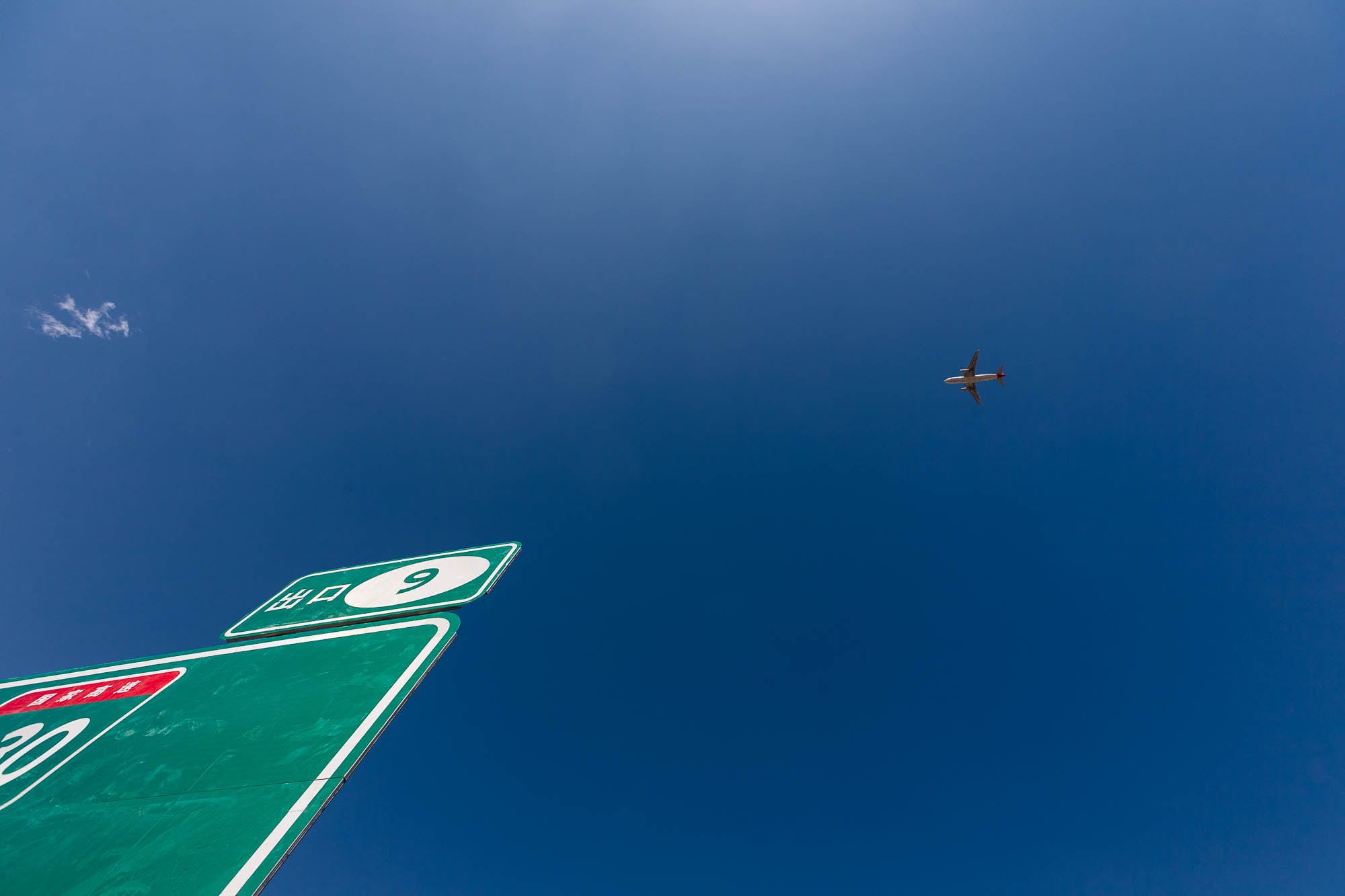 …well, to be honest I pondered for like five minutes, then I thought, fuck it.

We had lunch in a small place on the roadside. I ordered a plate of noodles that were so spicy I could barely look at them, let alone eat them. 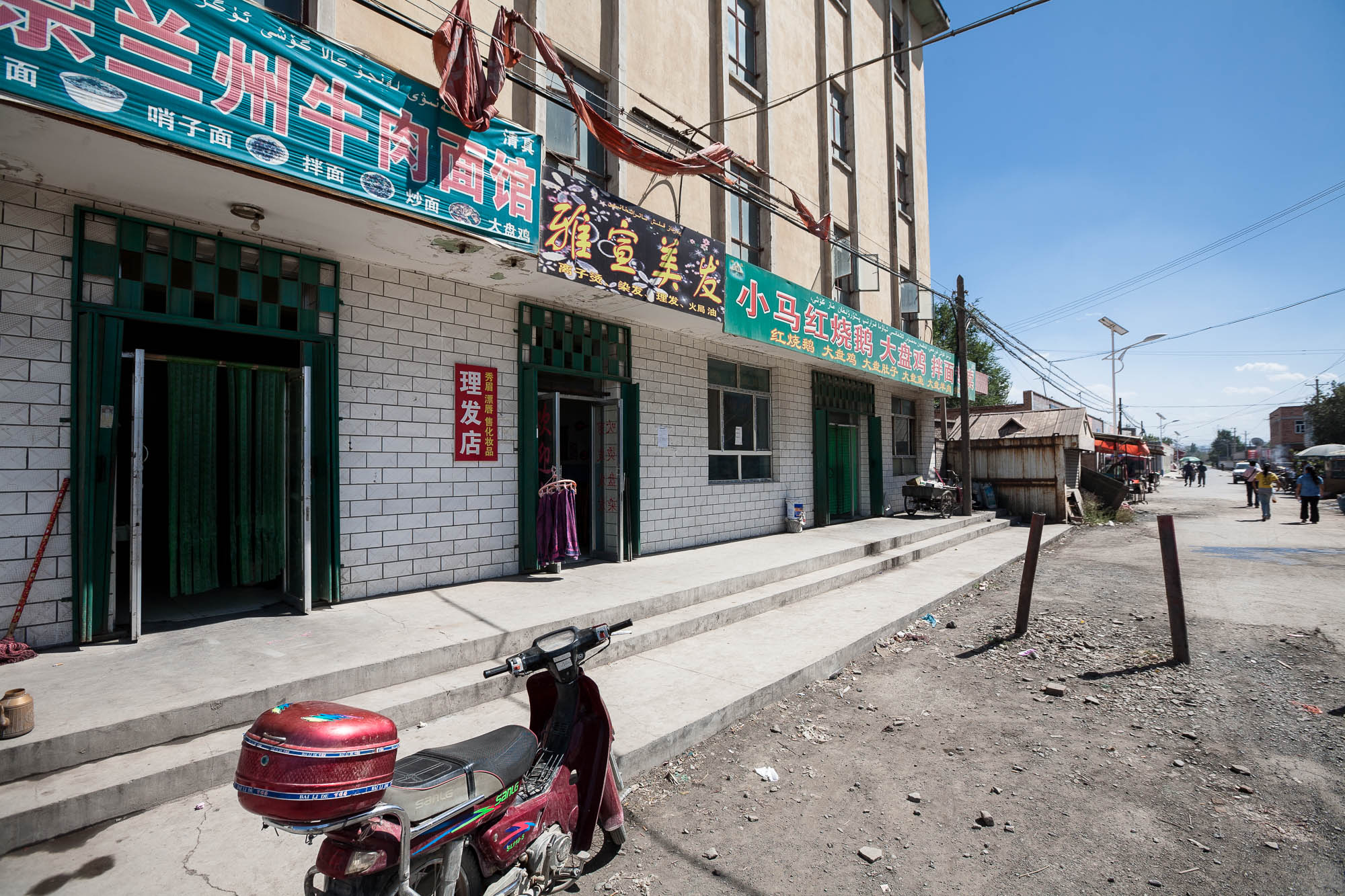 “What’s this foreigner doing?” Uncle Shen got asked by the locals.
“He is walking to Germany!” he said and smiled, and I wondered if this was the right answer.

Was there even a right answer at all?

I was surprised by two things today, the first of which was the heat: 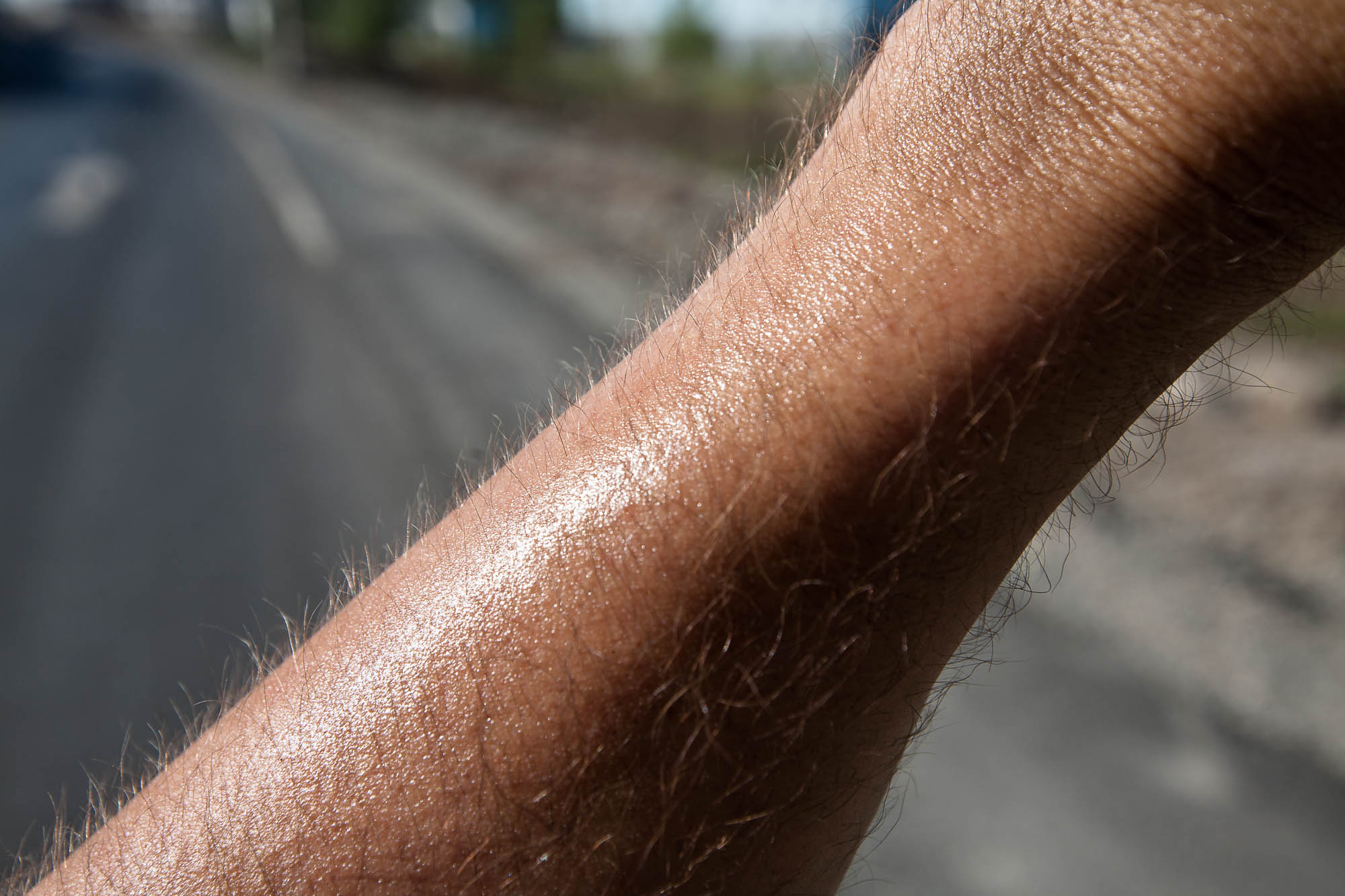 Now you can say something along the lines of: “Chris, you old fool, you went to the Gobi desert in late August – just what did you expect??”

And of course you are right. But actually, it had been fairly cool during the past few days in the city. Like, sweater-type cool. Maybe even put-on-a-jacket-type cool.

Anyways, Uncle shen and me eventually found a nice spot for a cool rest under the highway: 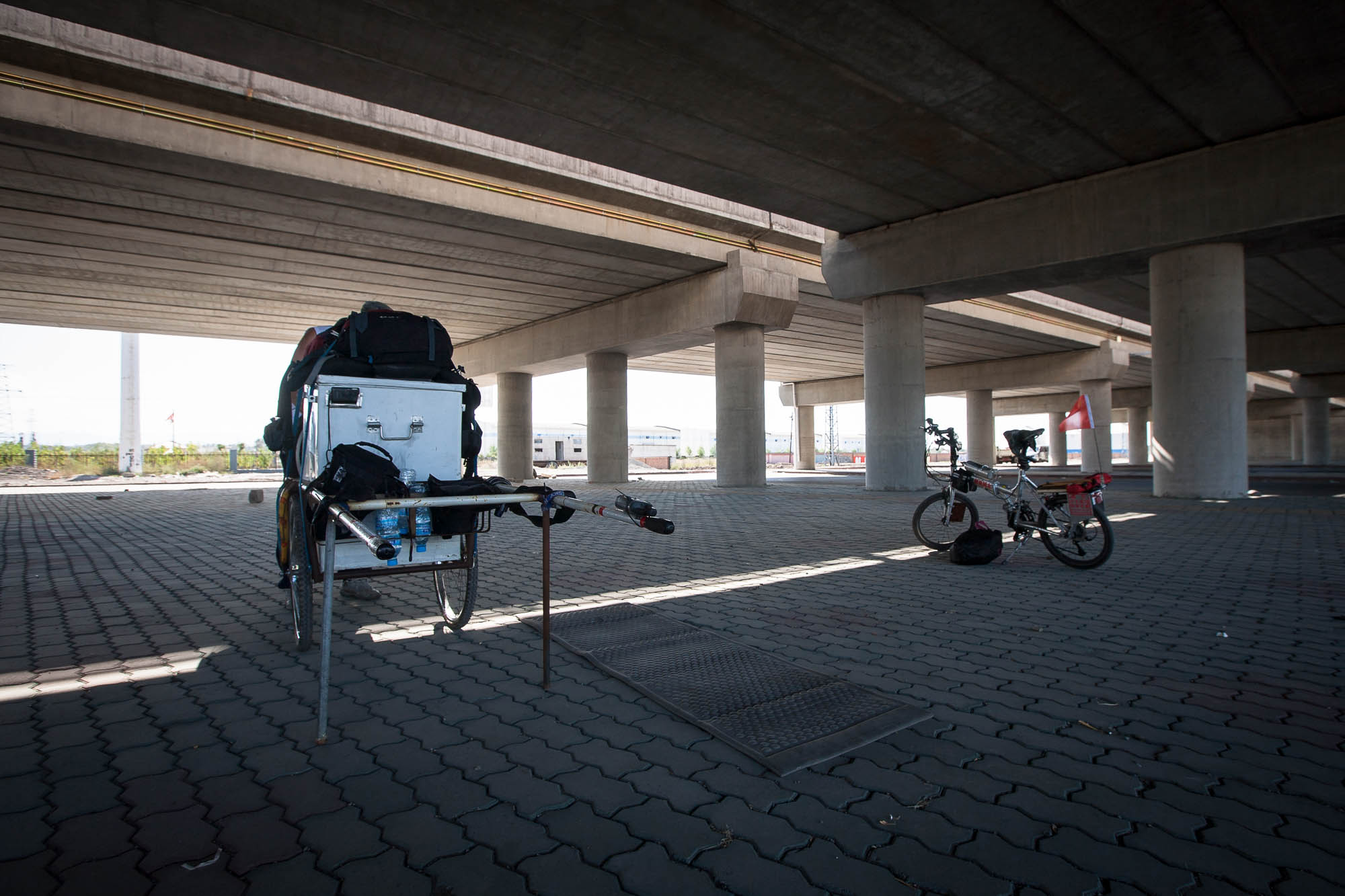 Then we went back out into the afternoon heat:

…and the second thing that surprised me? Well, I had gotten this presumably superb idea to be wearing sandals on this year’s summer walking trip. They are more comfortable and a lot cooler than my heavy hiking boots, so why the hell not wear them? 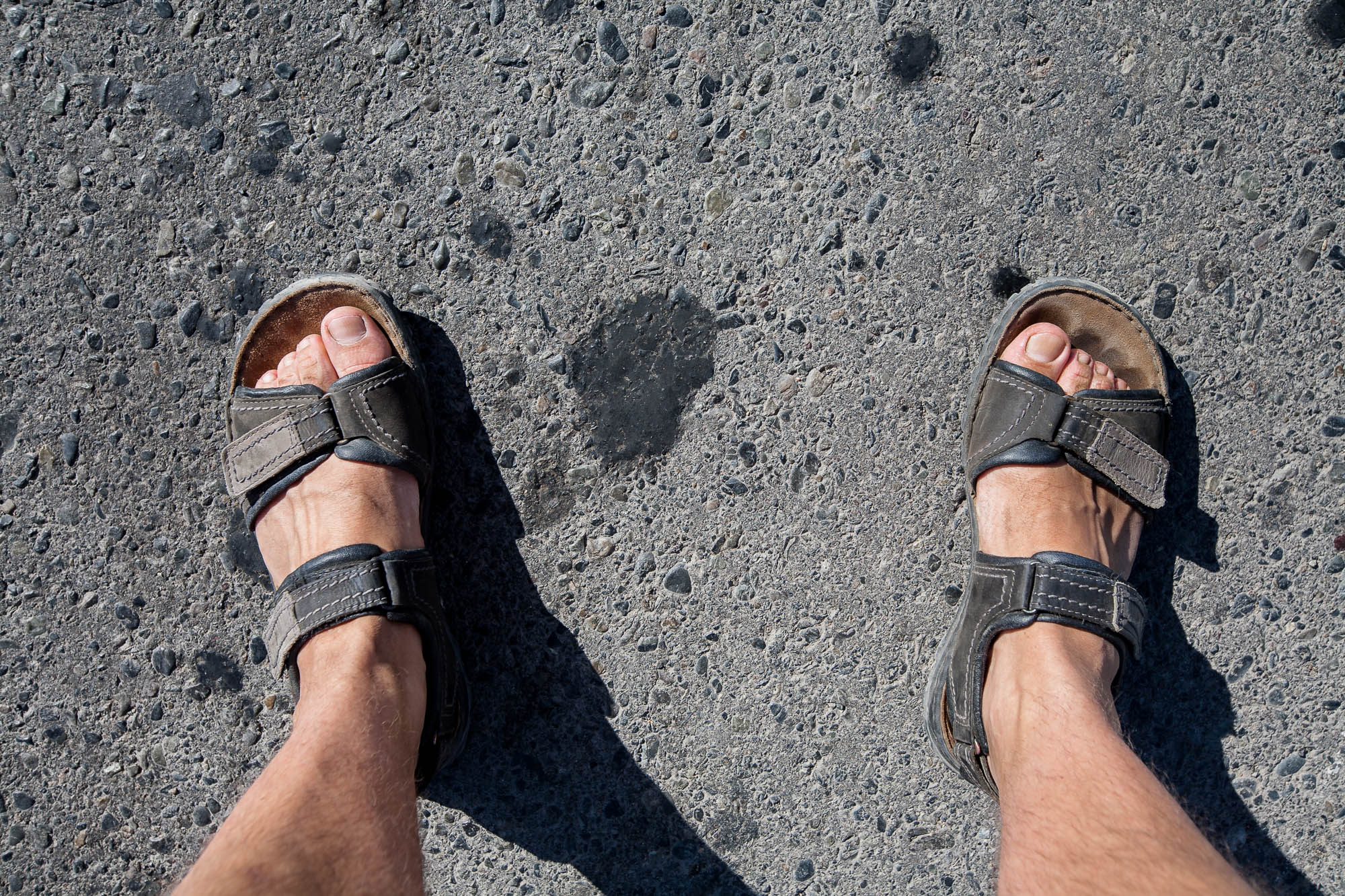 Well, let me tell you why not: first of all, your feet slide around in them, at least mine did. And second, you always get little rocks and pebbles in them, which is even more annoying.

Now you can say something like: “But Chris, what kind of idiot would try to walk around in the Gobi desert wearing sandals? Didn’t you know better??”

We finally made it to Changji in the early evening, by the time of which I was seriously suffering.

I was happy to see this miserable river bed announcing the proximity of the city: 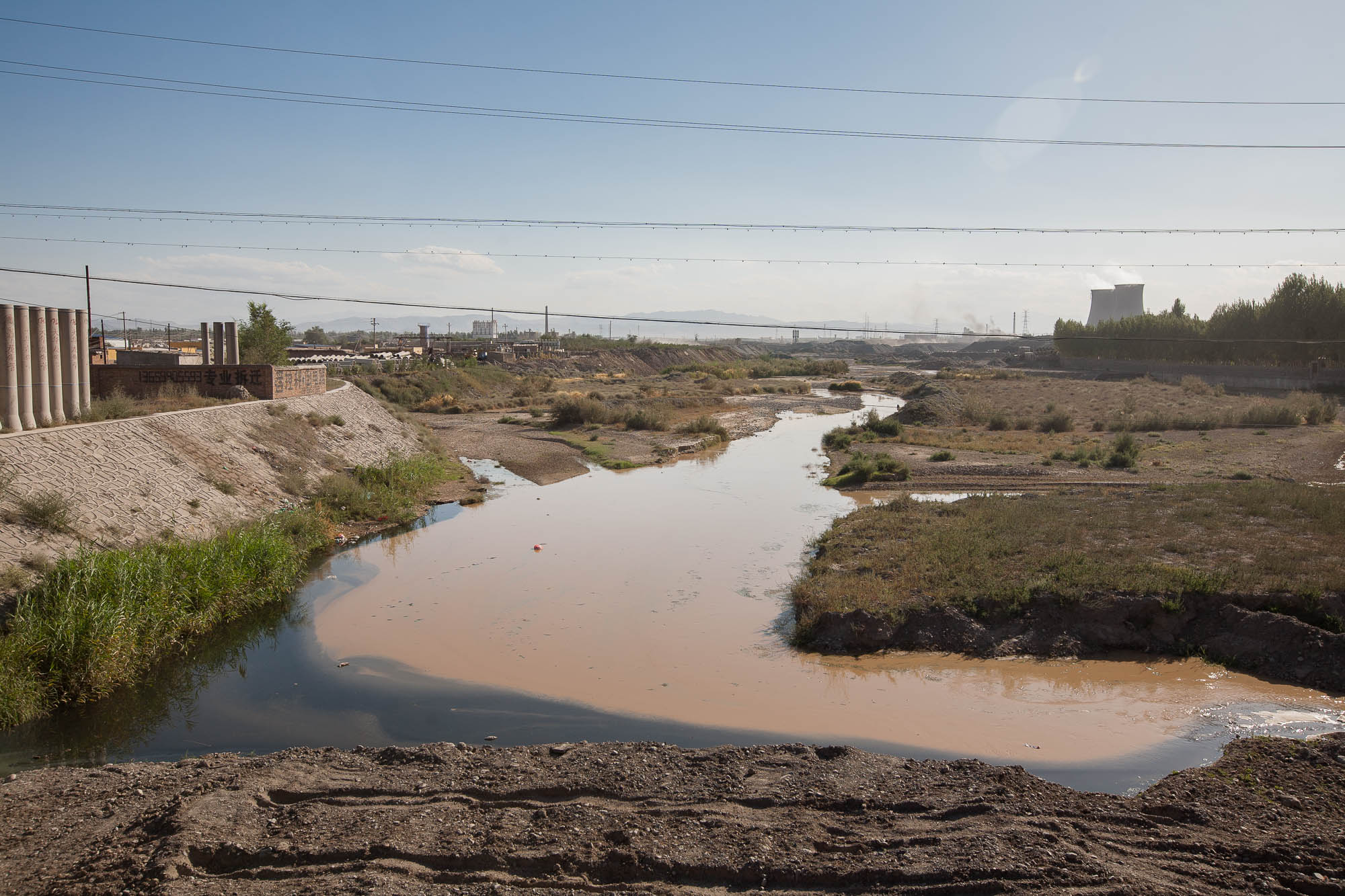 …and when we made the last turn onto a street that was lined with cooling trees, I almost forgot how much my feet hurt: 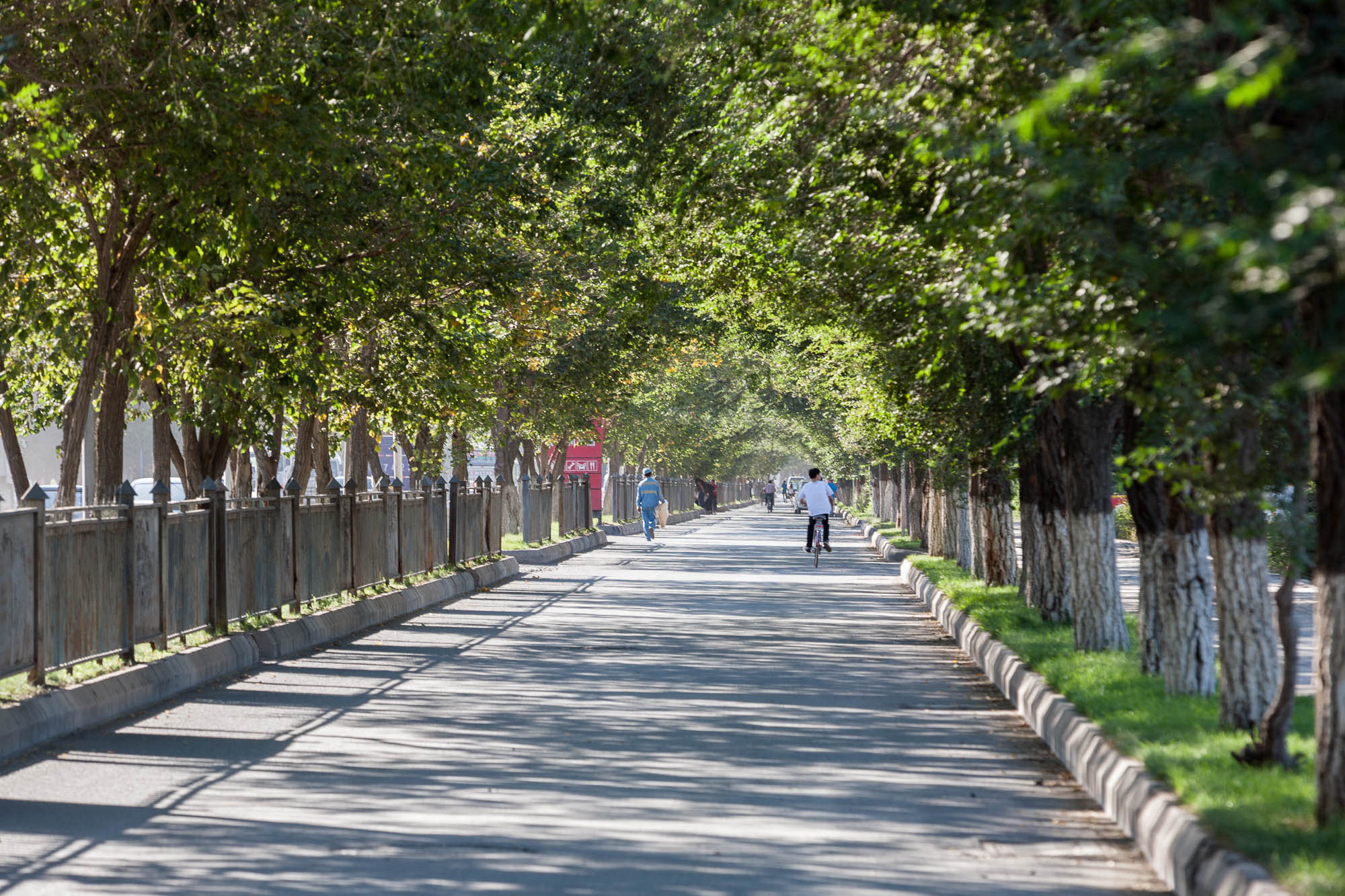 Uncle Shen dropped me off at the central square, where I was going to find a hotel to cure my foot pains: 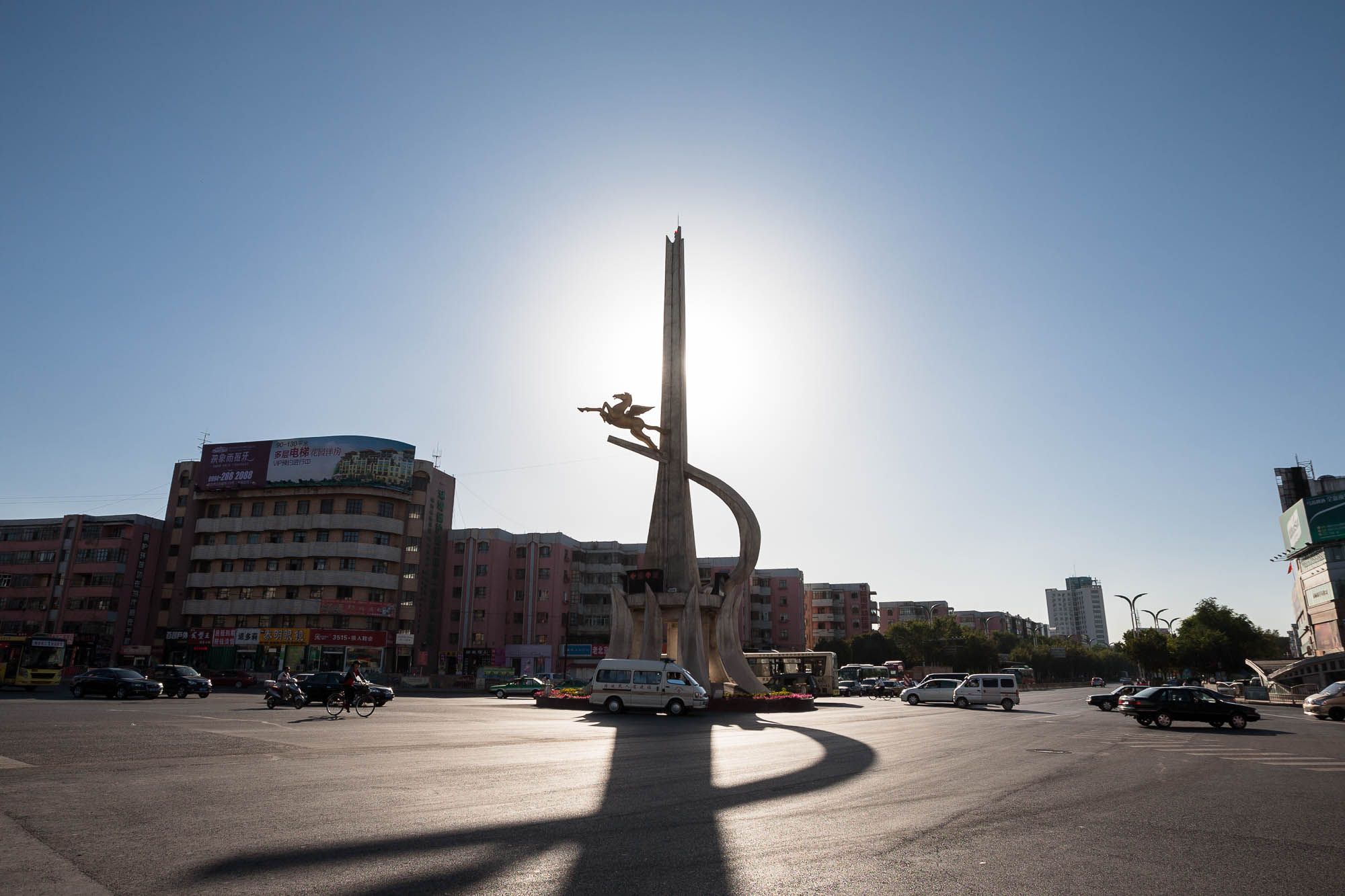 Then we said good-bye, because he had to go home. This came as a sad surprise, because I thought he was going to accompany me for a few more days. But he said he had to take his dog to the doctor. (Apparently a few kids from the neighborhood had tried to milk the poor thing, causing an infection on the teats. WTF??)

Good-bye my dear Uncle Shen, and thank you for everything!

Here’s a short video of some of the mighty walking we did today:

Now I am in my room, and my feet hurt. They really hurt like hell.

Was it this that I had come out here for?

There’s a simple answer to this question:

Activity: walking
Soundtrack: Britney Spears – “Oops... I did It Again”