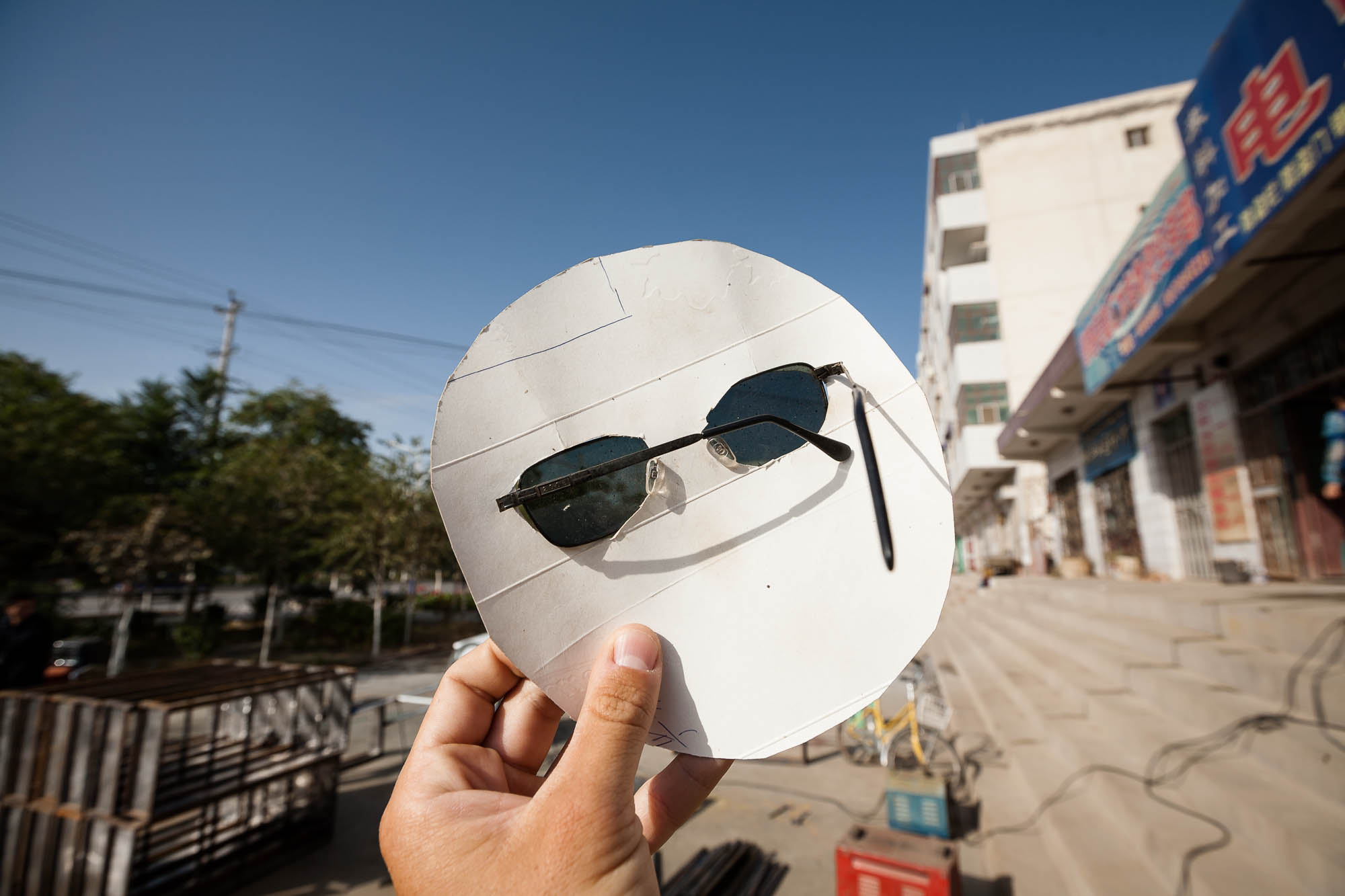 The first time in 48 hours that I see the light of day – and it is so bright that I might have to put these glasses on: I went all over town today, looking for a repair shop to give the Caboose a general makeover: When I finally found one, me and the owner […]

the problem with chopsticks 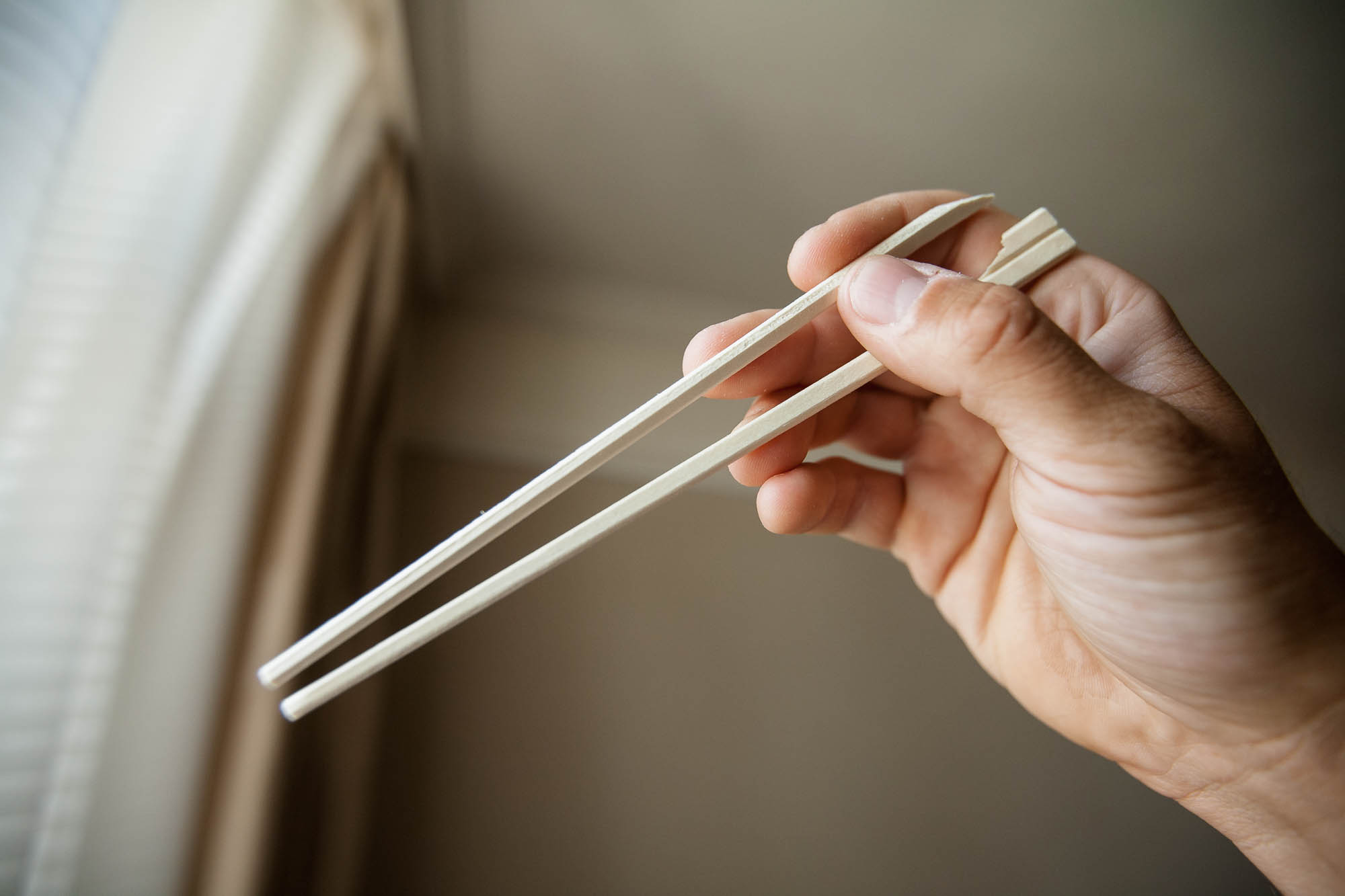 Here is something I should have done a long time ago: Stop using those disposable chopsticks. I remember reading about this problem in Mandarin class before: people use disposable chopsticks too much, thus putting a large part of the country’s wood resources to waste. The solution is as simple as it is obvious: Get your […] 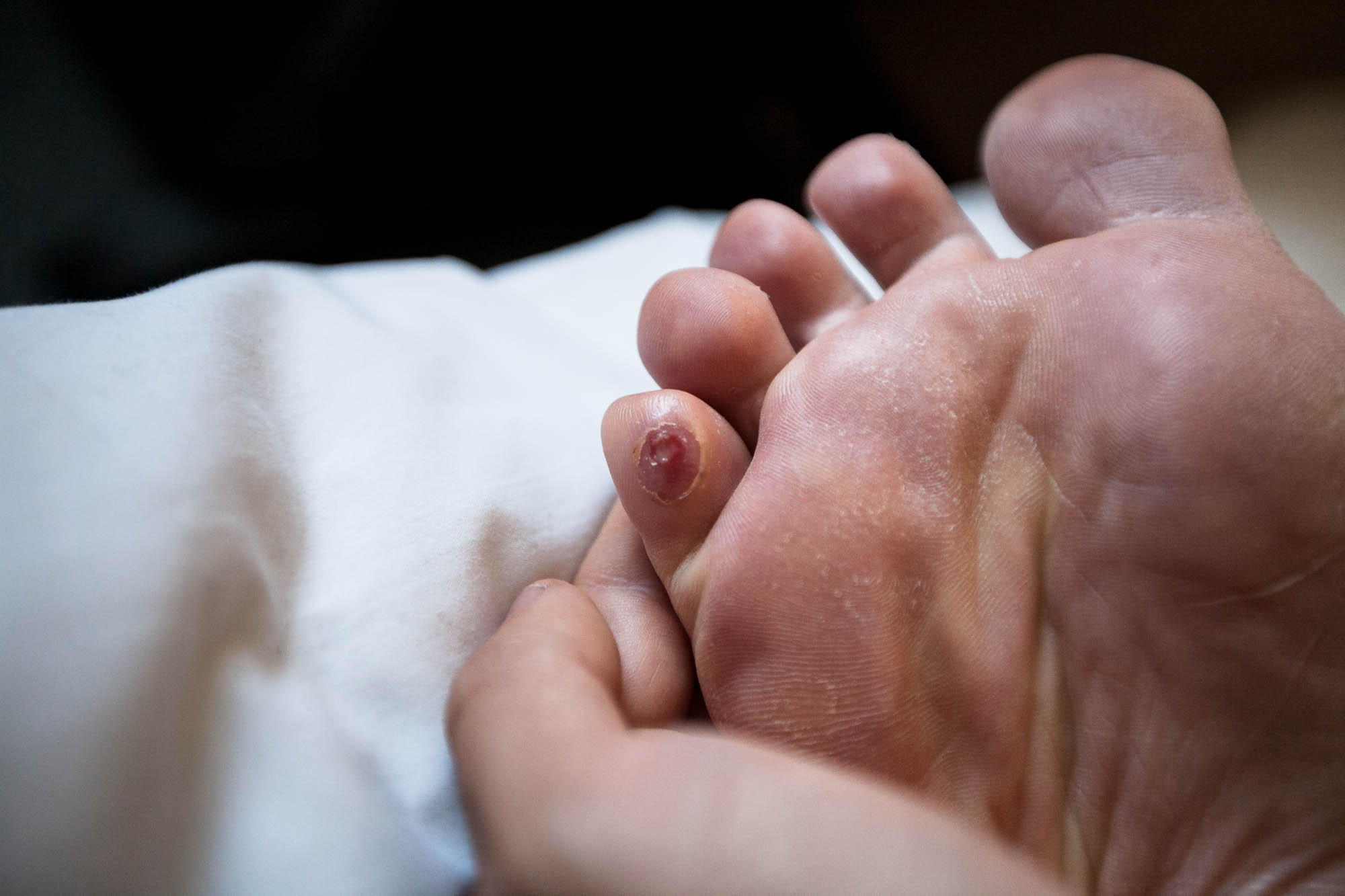 After one year of walking, my feet will be hard as steel, and I will be able to WALK LIKE A WARRIOR! Those were my thoughts last winter, when I had just set out on this trip and my days were filled with blistering pains (health points +10, good news). Well, not much has changed […]

what will they say?

Posted on October 9, 2008 by Christoph Rehage 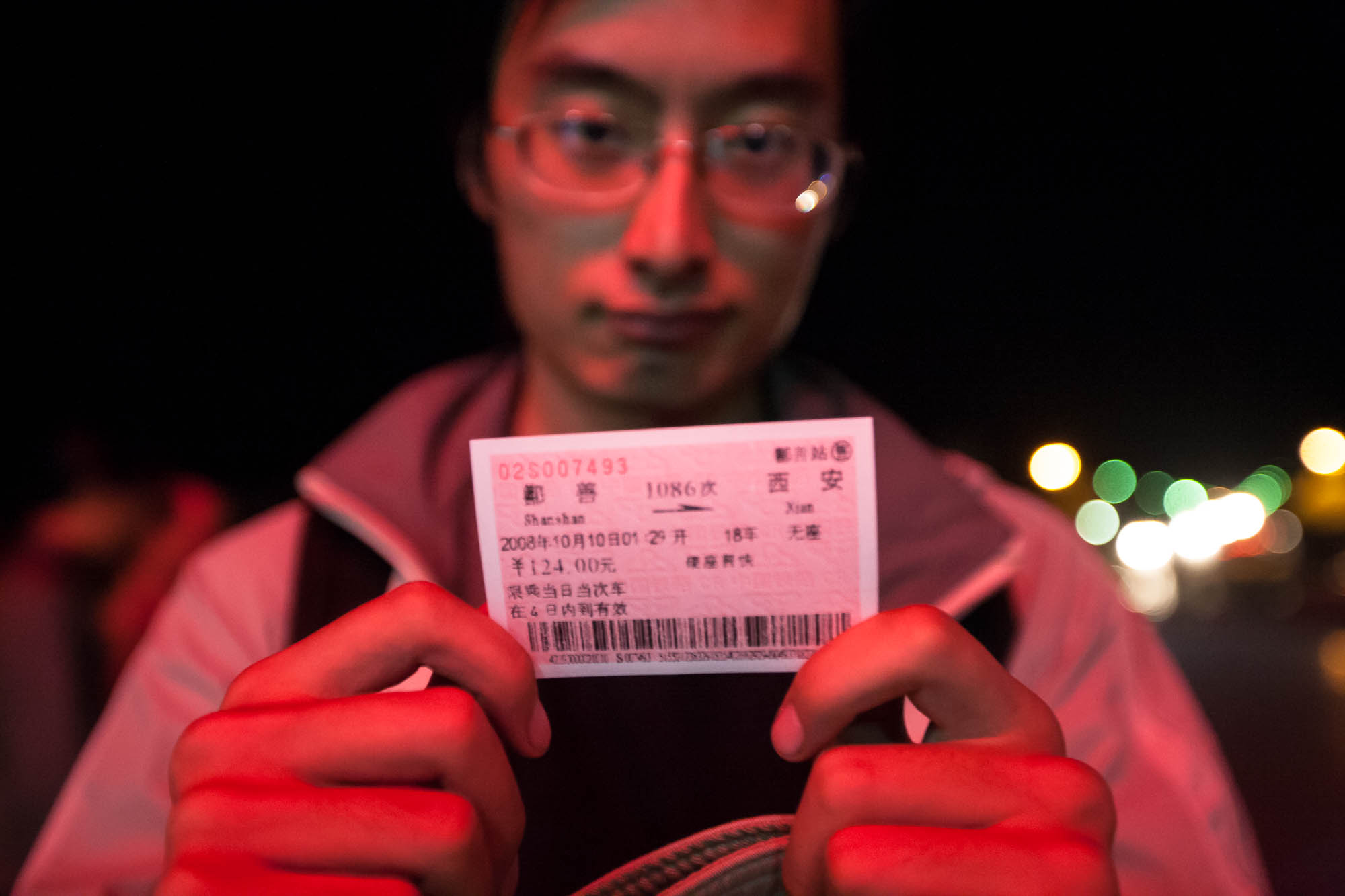 There are oilfields here in Shanshan: Guess who’s drilling? Right, the ladies and gentlemen from Tuha Oil City (crude oil). We didn’t get to know any of them though, so we weren’t able to find out what it feels like to drive 300 kilometers to work. … Vincent from Taiwan 台湾 was riding his bike […]

is this the end?

Posted on October 8, 2008 by Christoph Rehage 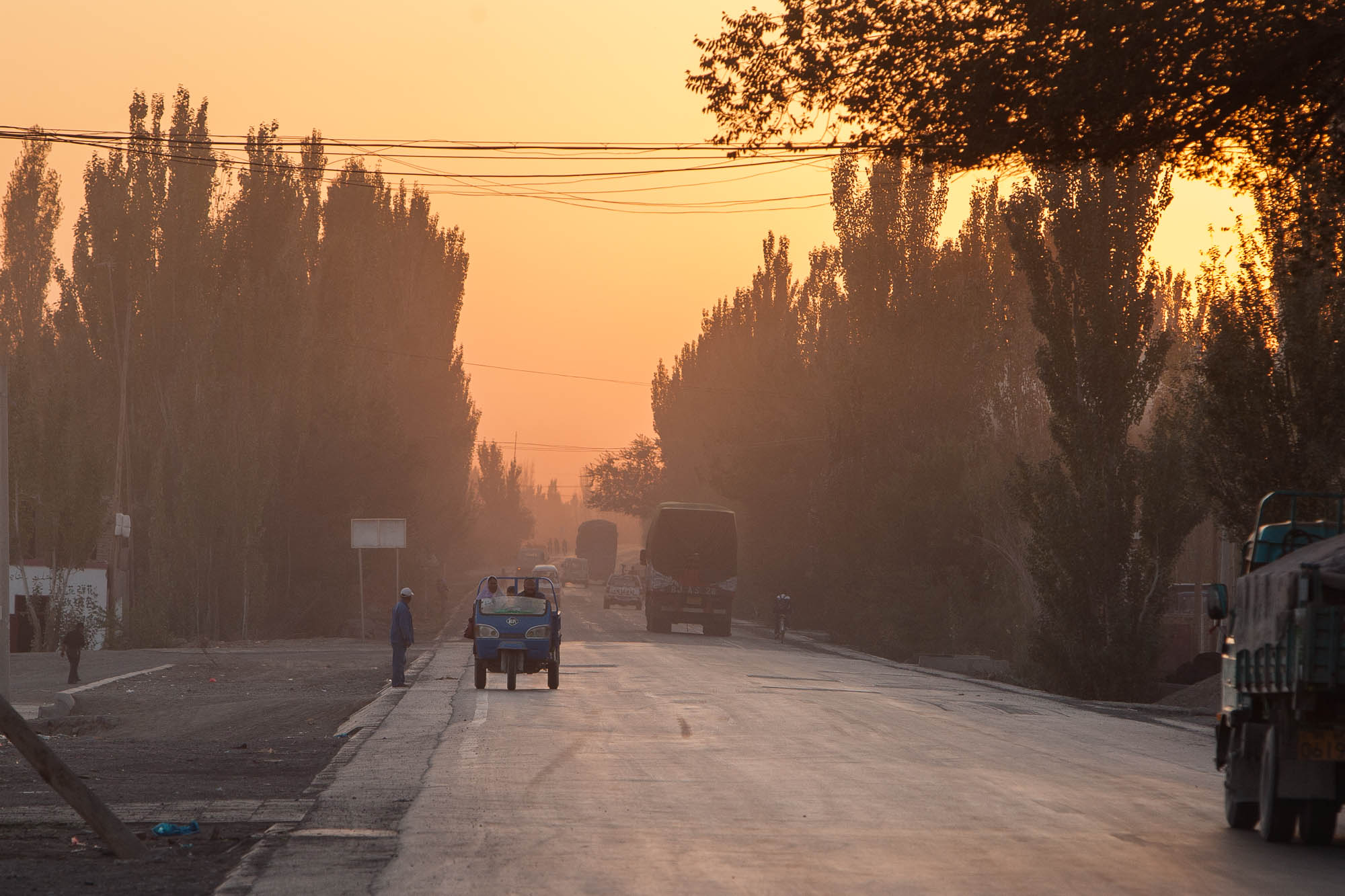 The Yu family I was staying with was very friendly, and they wouldn’t let me go unless I had breakfast with them: They told me that the largest stretches of Gobi desert now were behind me, and that I could look forward to walking through more populated areas from now on. The end of the […]

it’s all in the family

Posted on October 7, 2008 by Christoph Rehage 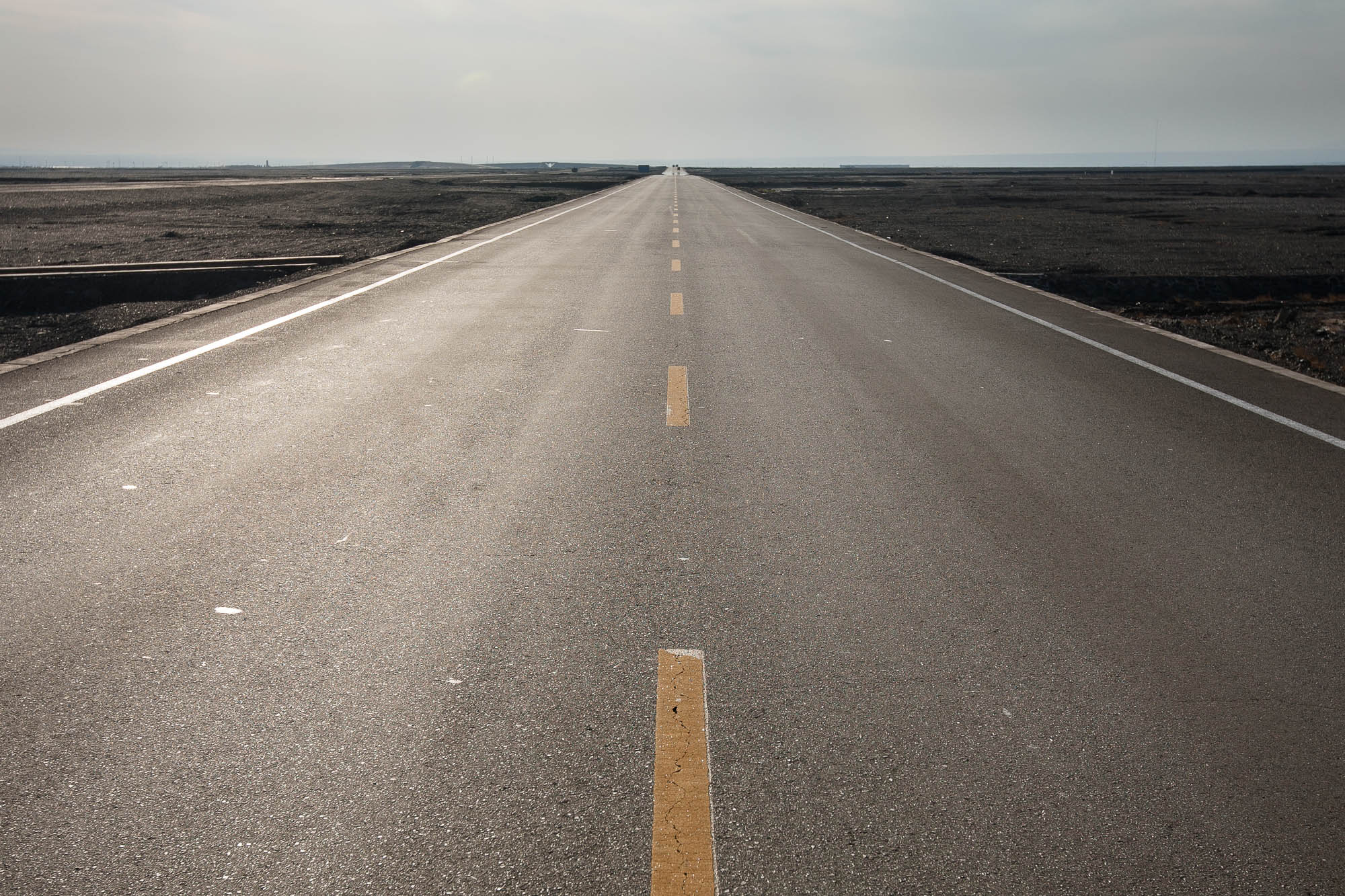 The night had been good. No filth, no noise. All I could hear was the wind blowing outside, which made for a very cozy feeling in my little room. …but still, I really didn’t feel like walking anymore, so today it was all about the road signs: …another 100km through those empty spaces… Sometimes I […]

oh, what a good thing!

Posted on October 6, 2008 by Christoph Rehage 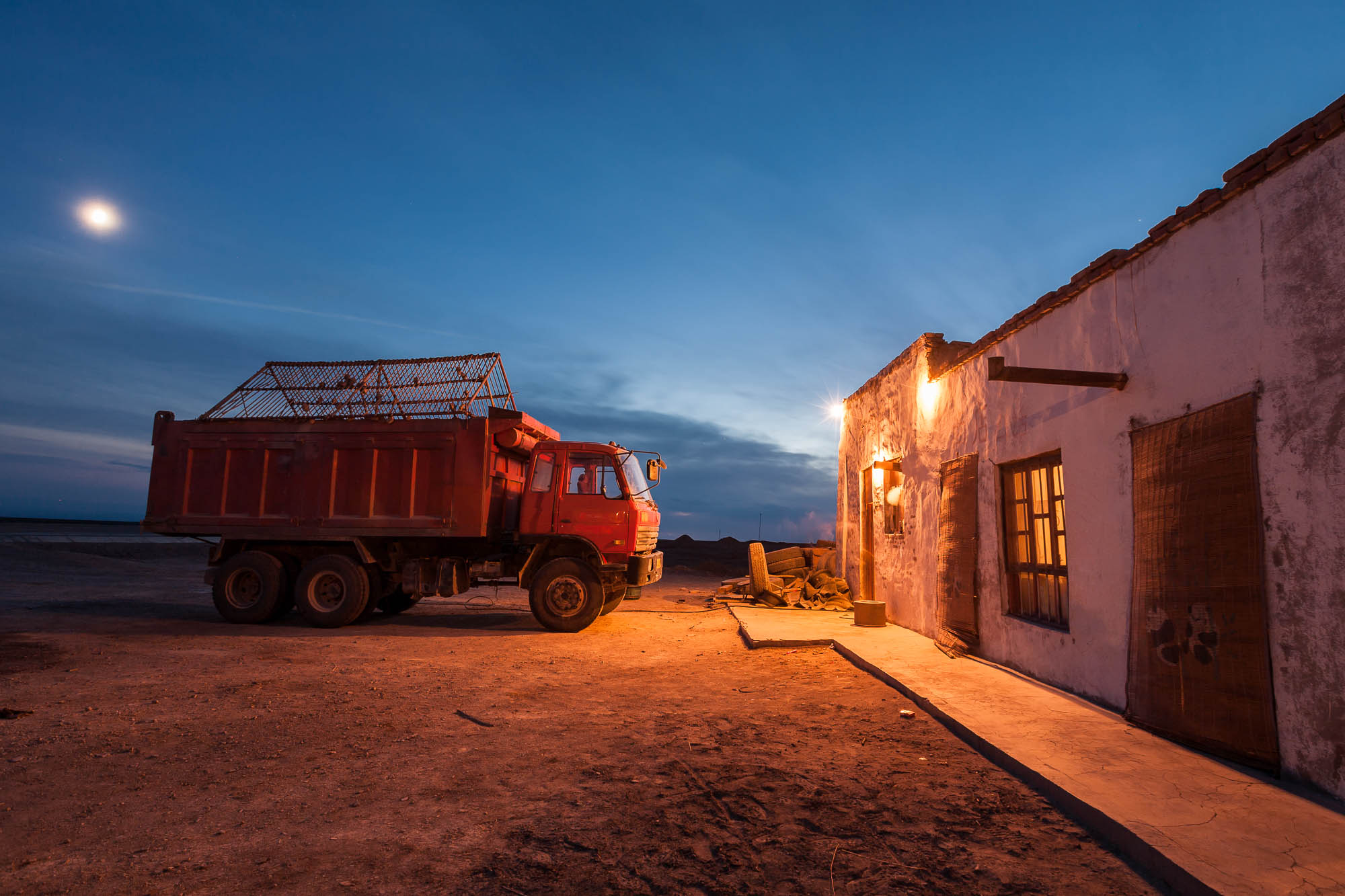 Hongshankou – a crappy little place full of bad food, dirty beds and cheap hookers: So happy to leave that place! There was another stretch of nice fresh highway I found right after I started walking though, and that really cheered me up: Here’s part of my diet during these days: Nang bread and cucumber. […]

Posted on October 5, 2008 by Christoph Rehage 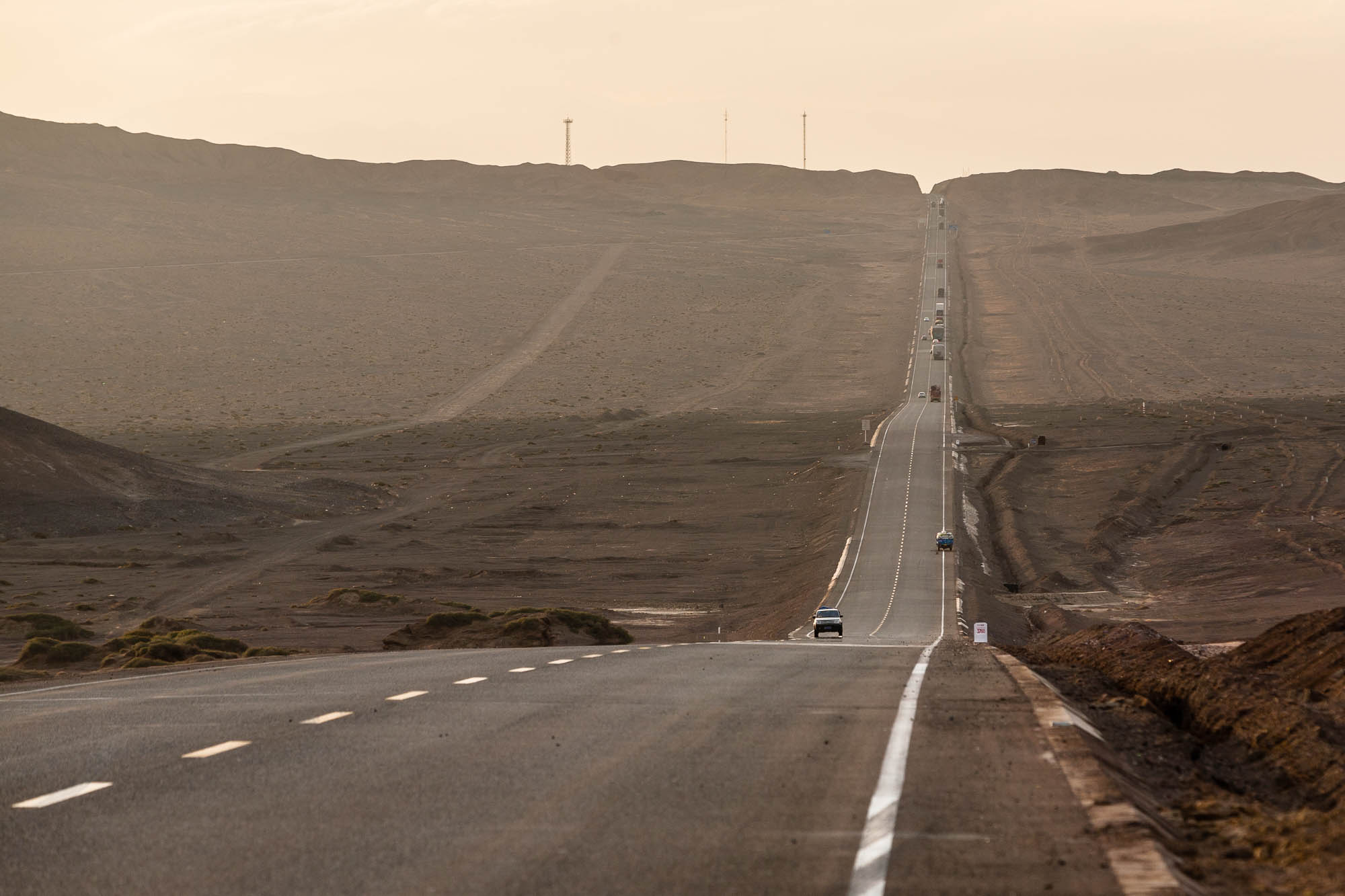 When I got up and looked out of the door, the other guys were preparing to go to work, and the wind had come: …the wind that everybody had been talking about. You see, it’s what they call a wind gap 风口 – the area between two mountain ranges where the winds have a natural […]

Mozart, please help me with your violins!

Posted on October 4, 2008 by Christoph Rehage 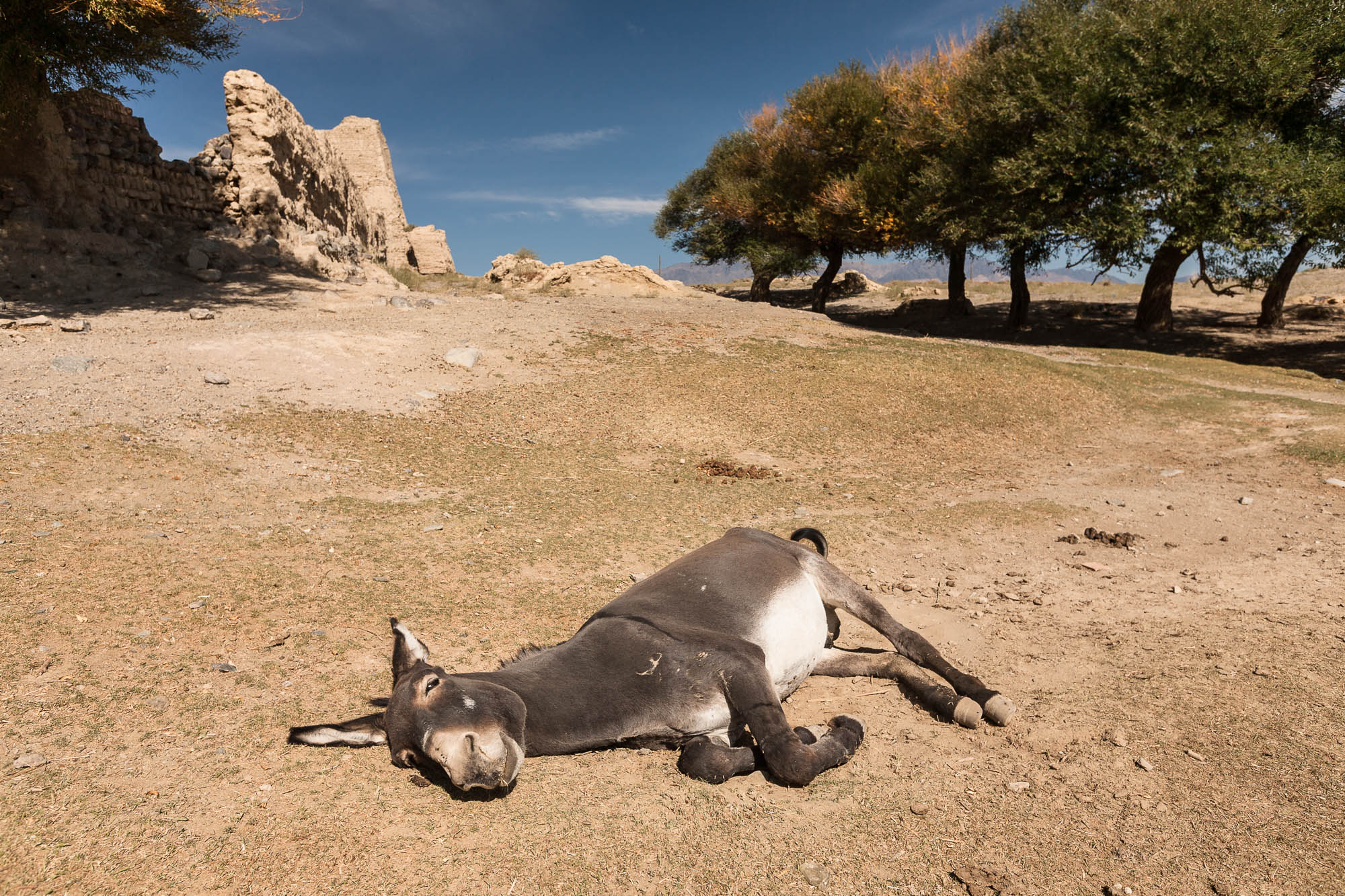 Oh, had I only known about my friend Uncle Shen’s snoring habits before! Last night the man fell asleep right away, and then he went at it like a gang of chainsaws in the virgin forest, making it virtually impossible for me to get any sleep at all. When I got up I felt like […]

out with Uncle Shen

Posted on October 3, 2008 by Christoph Rehage 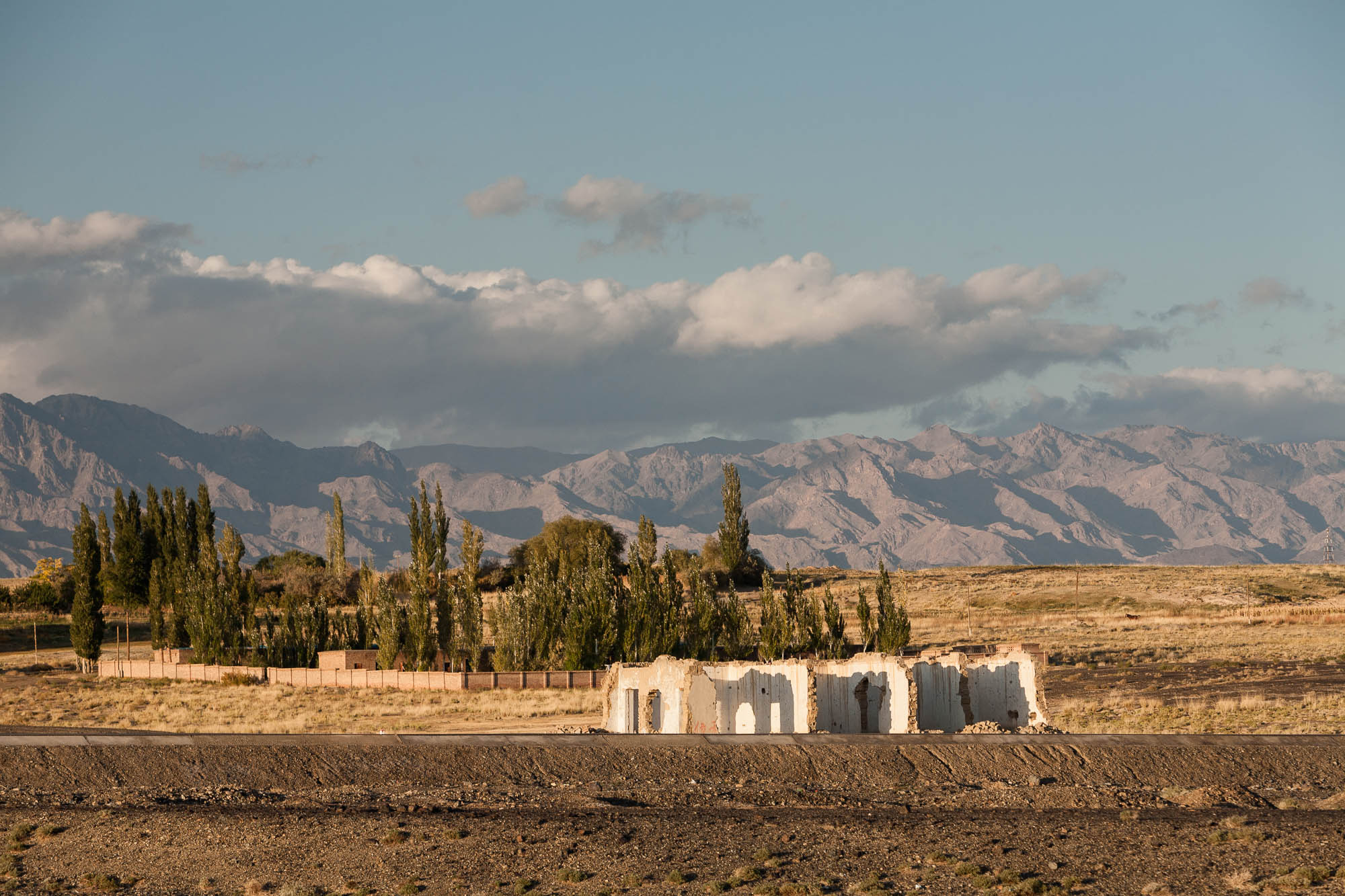 I got back on the long red line going west today: There was some pretty crappy weather out there – strong winds and rainfall – and the distance to the next town seemed somewhat overwhelming, but I had Uncle Shen with me, who was slowly riding his bike along… …so at least it didn’t get […]

Posted on October 2, 2008 by Christoph Rehage 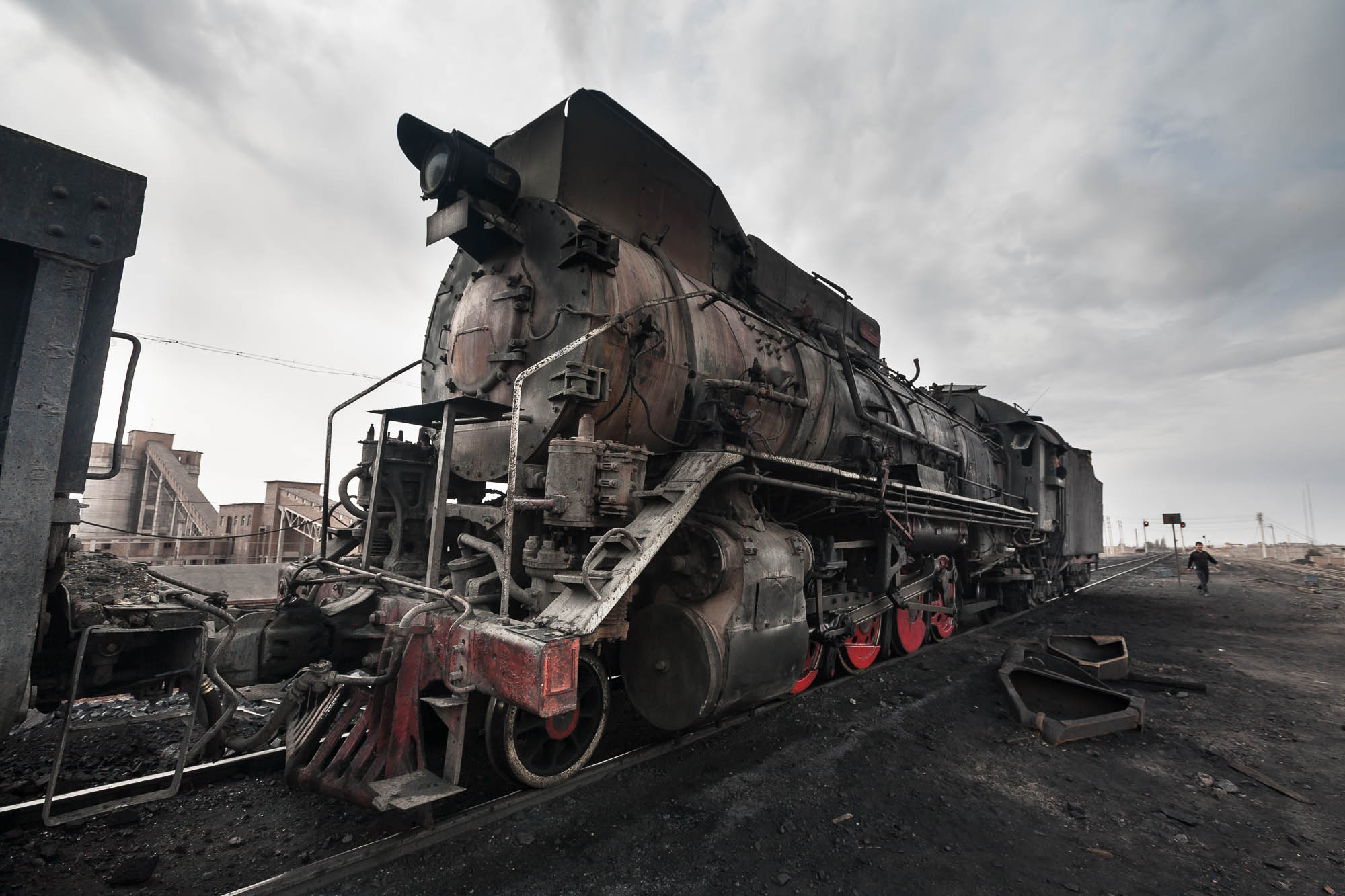 How come my feet are so dirty? Well, we went to the place where they offload coal today… …and that’s where we saw… her: 8195 – what a boring name for such a beautiful old locomotive: I think they should have named her after a girl, or some big old lady. Not just a number. […]

fire in the hole

Posted on October 1, 2008 by Christoph Rehage 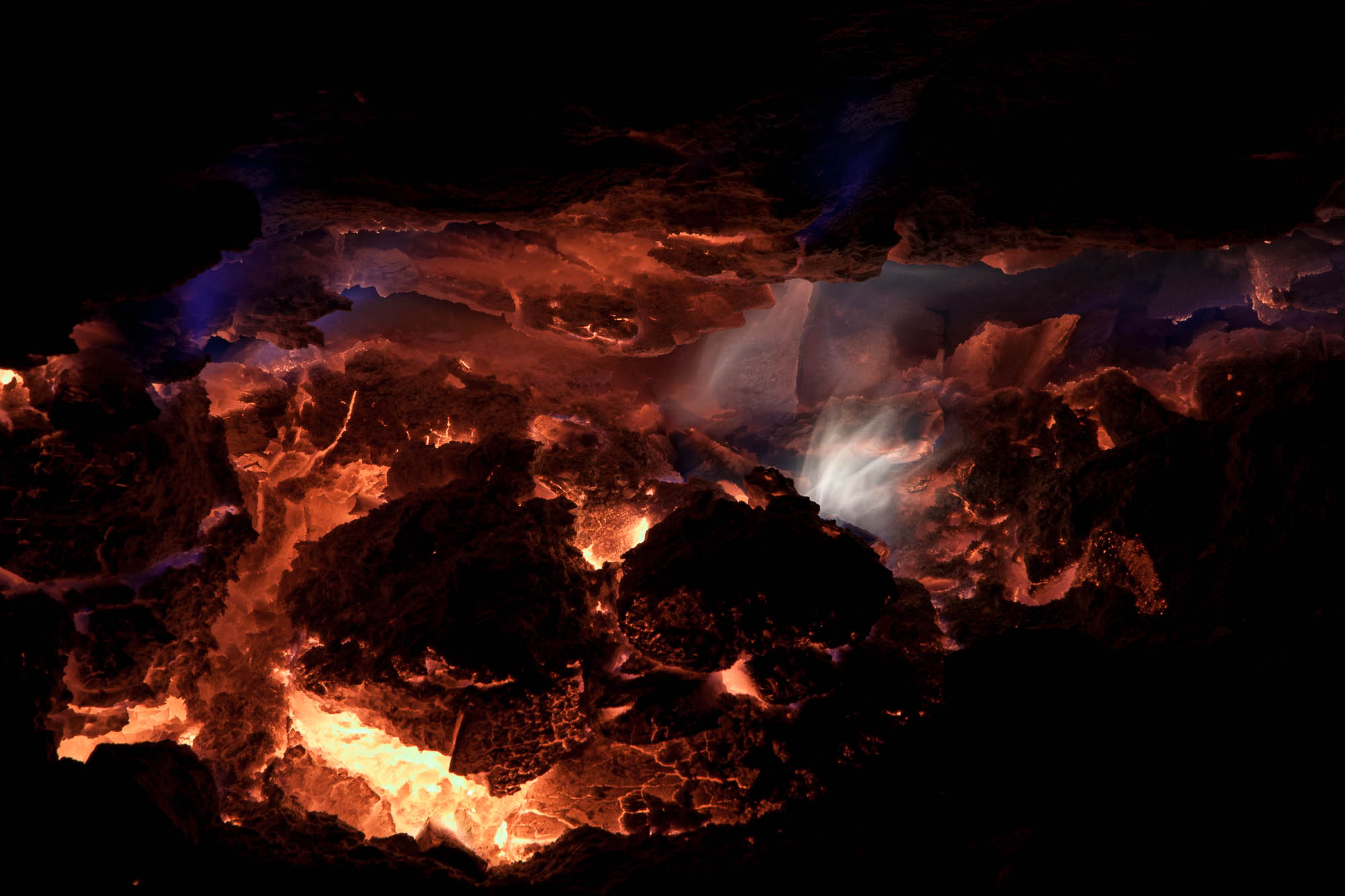 If you’ve read yesterday’s post, you know that I came here with basically no expectations at all. …that being said, now please allow me to present to you the best hotel I’ve ever stayed at: Doesn’t look like much, does it? That’s exactly what I thought at first, and I’m not going to make too […]

Posted on September 30, 2008 by Christoph Rehage 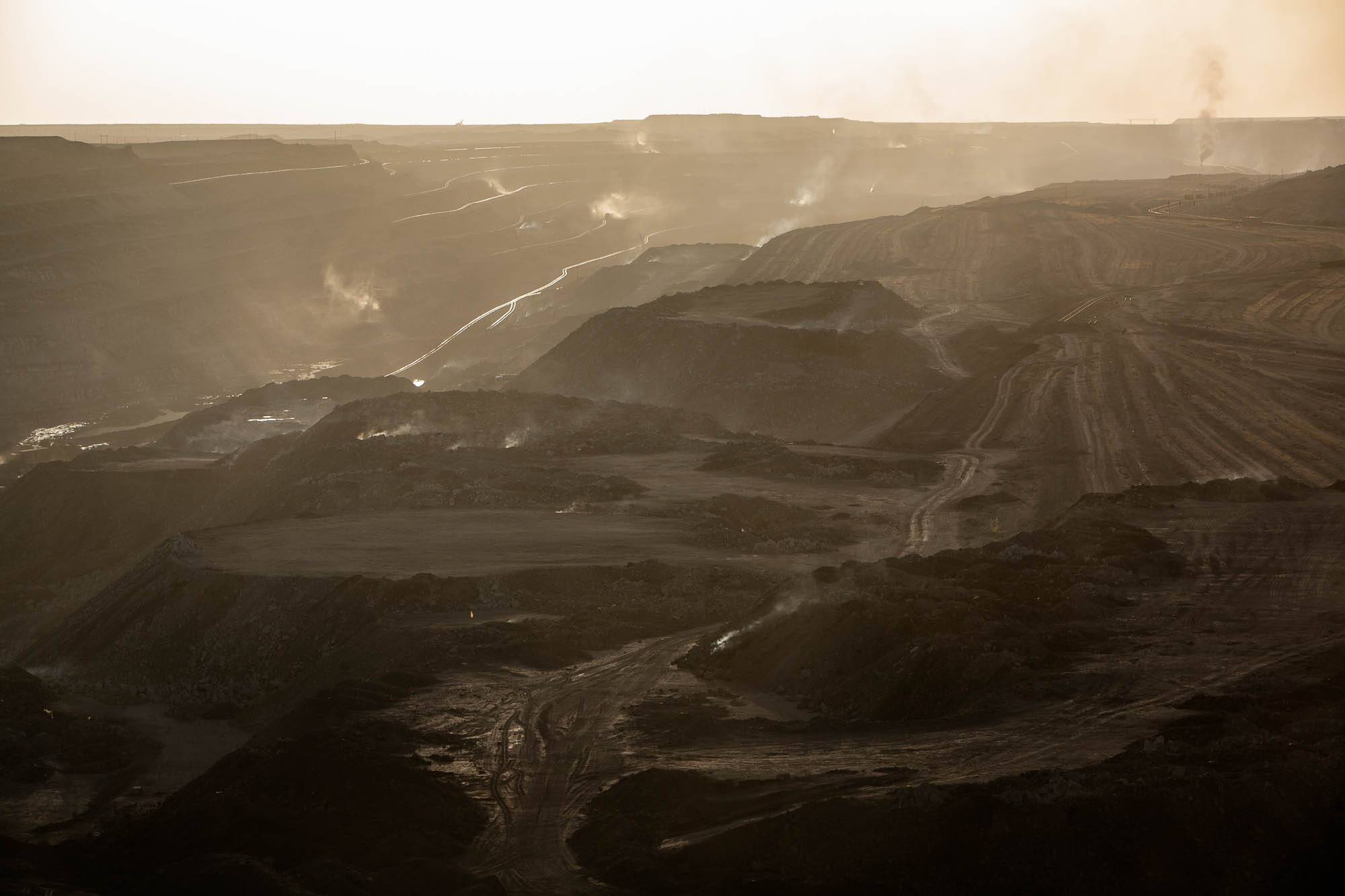 The last one of my three new tires started acting up in the morning, and I knew it was about to become a very hot and miserable day: Oh, how I envied this dude on his carriage that I saw – there he was just dozing off while the donkey was getting the job done: […]

Posted on September 29, 2008 by Christoph Rehage 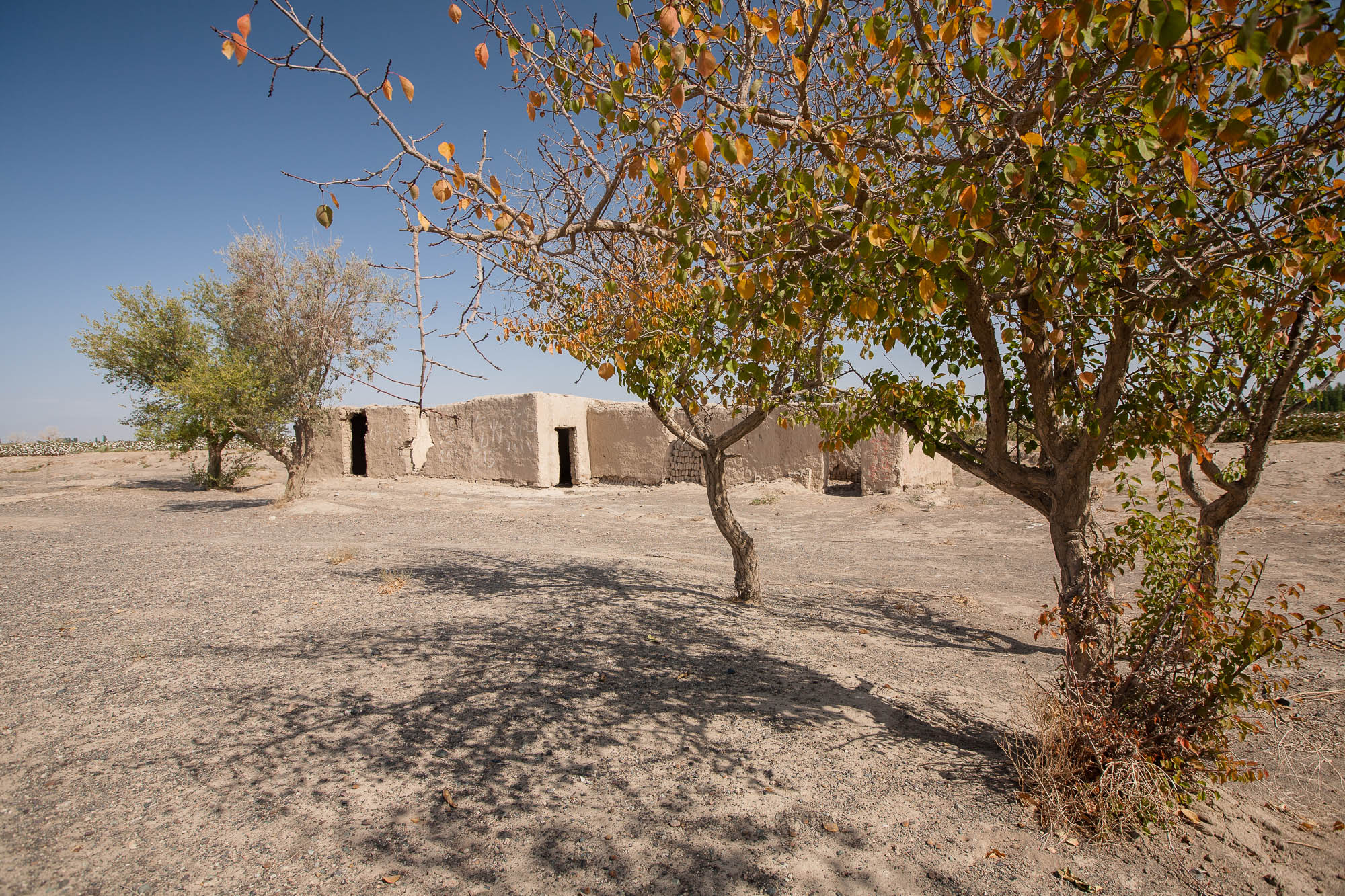 Finally a decent night spent in the outdoors. Not too warm, not too cold. Not too windy. I made this video time lapse of my morning routine: By loading the video, you agree to YouTube’s privacy policy.Learn more Load video Always unblock YouTube Note the two friendly dudes showing up for a chat. … There […]

Posted on September 28, 2008 by Christoph Rehage 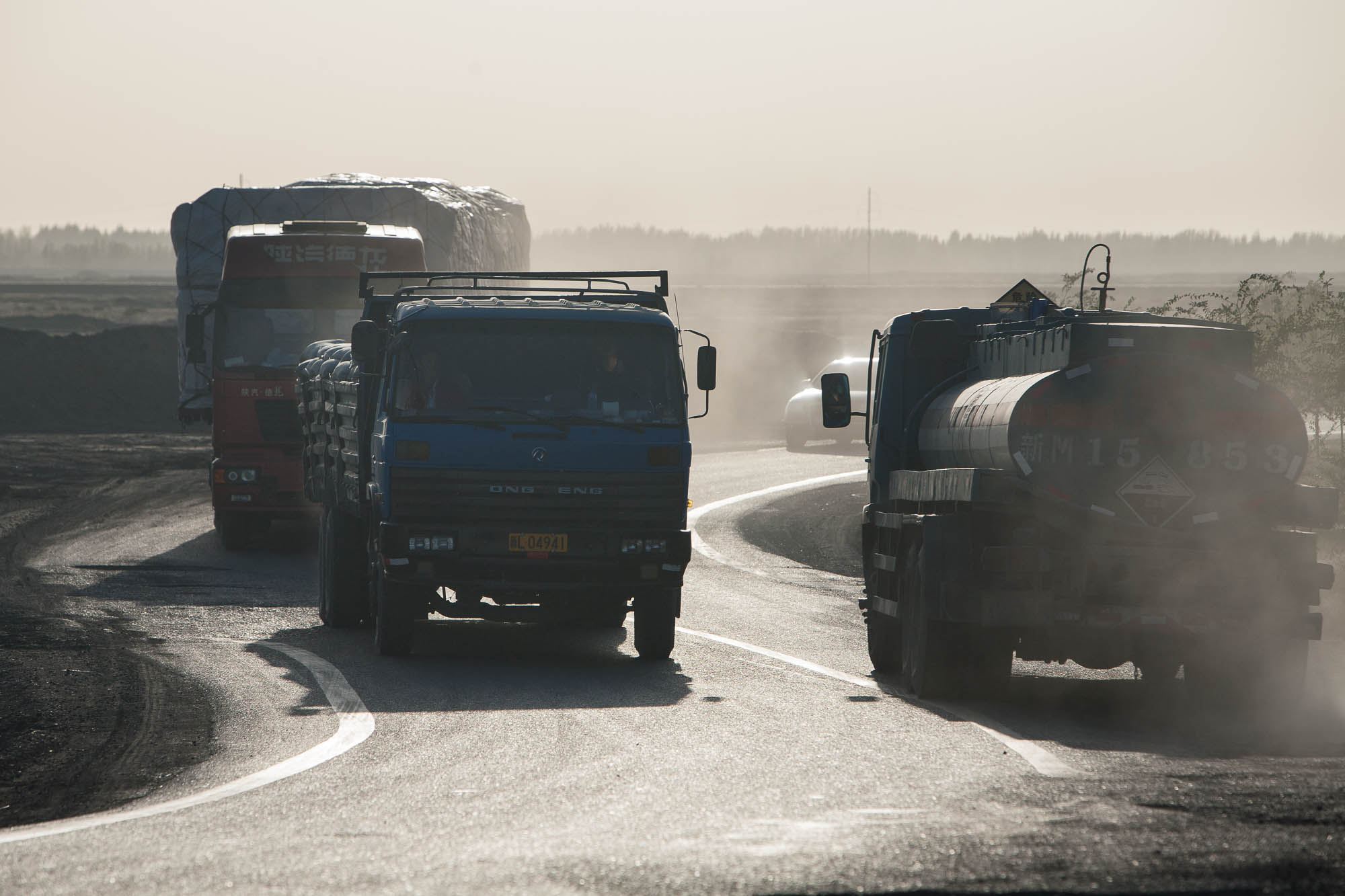 When I woke up, I knew I was going to have to dance. But before, I first walked a bit through the residential areas of the oil city: …often, when I’m looking at buildings like these from the outside, I can’t help but wonder what might be going on inside. Are the people in there […]

Posted on September 27, 2008 by Christoph Rehage 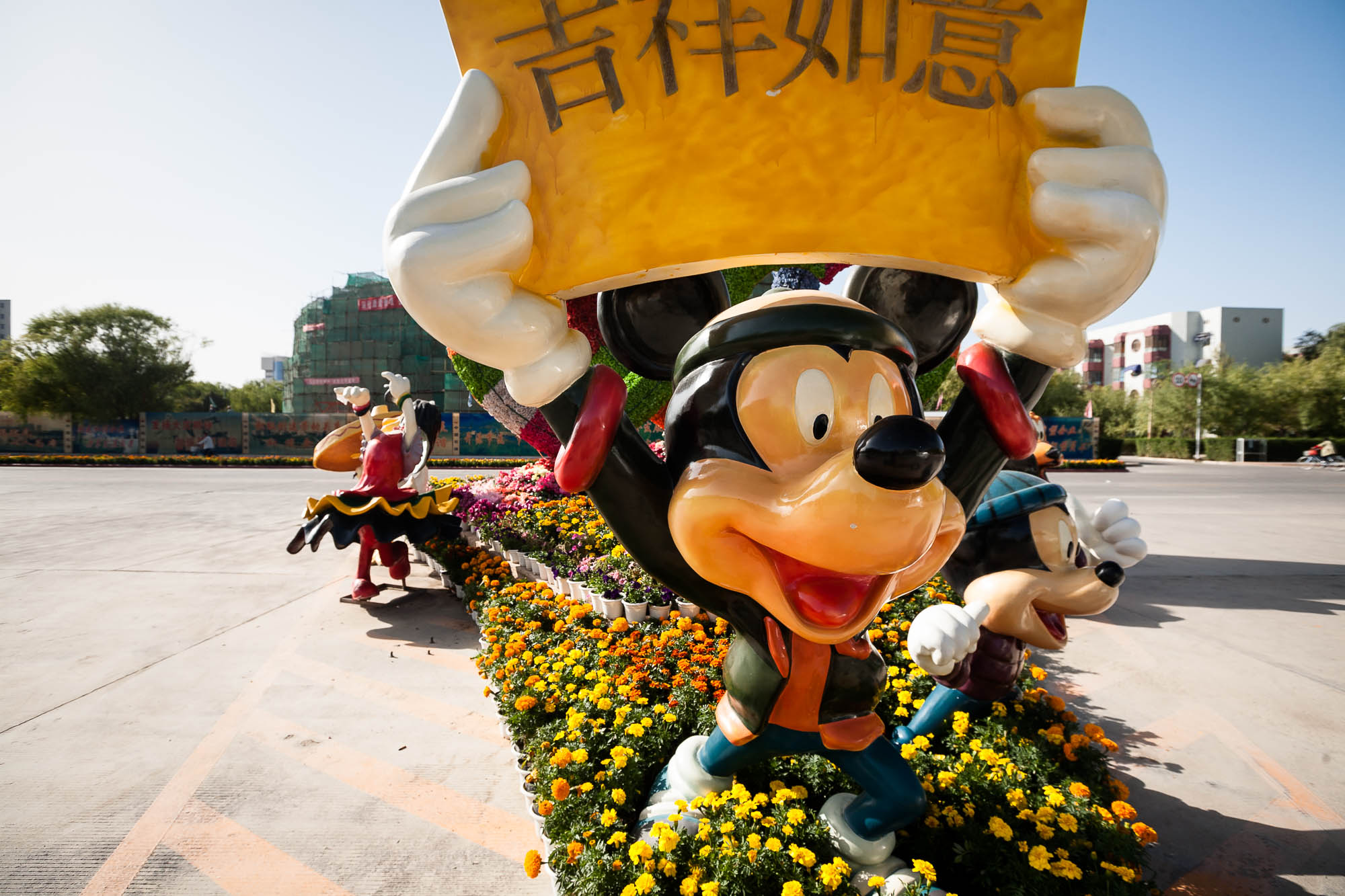 The wheels I had bought didn’t stand a chance out there. After investing a considerate amount of time and energy in the futile attempts to fix the damn problem ourselves (my friend Abdu and me, that is), we finally hauled the whole thing over to a bike repair shop and had him readjust the spokes: […]

getting ready to leave

Posted on September 26, 2008 by Christoph Rehage 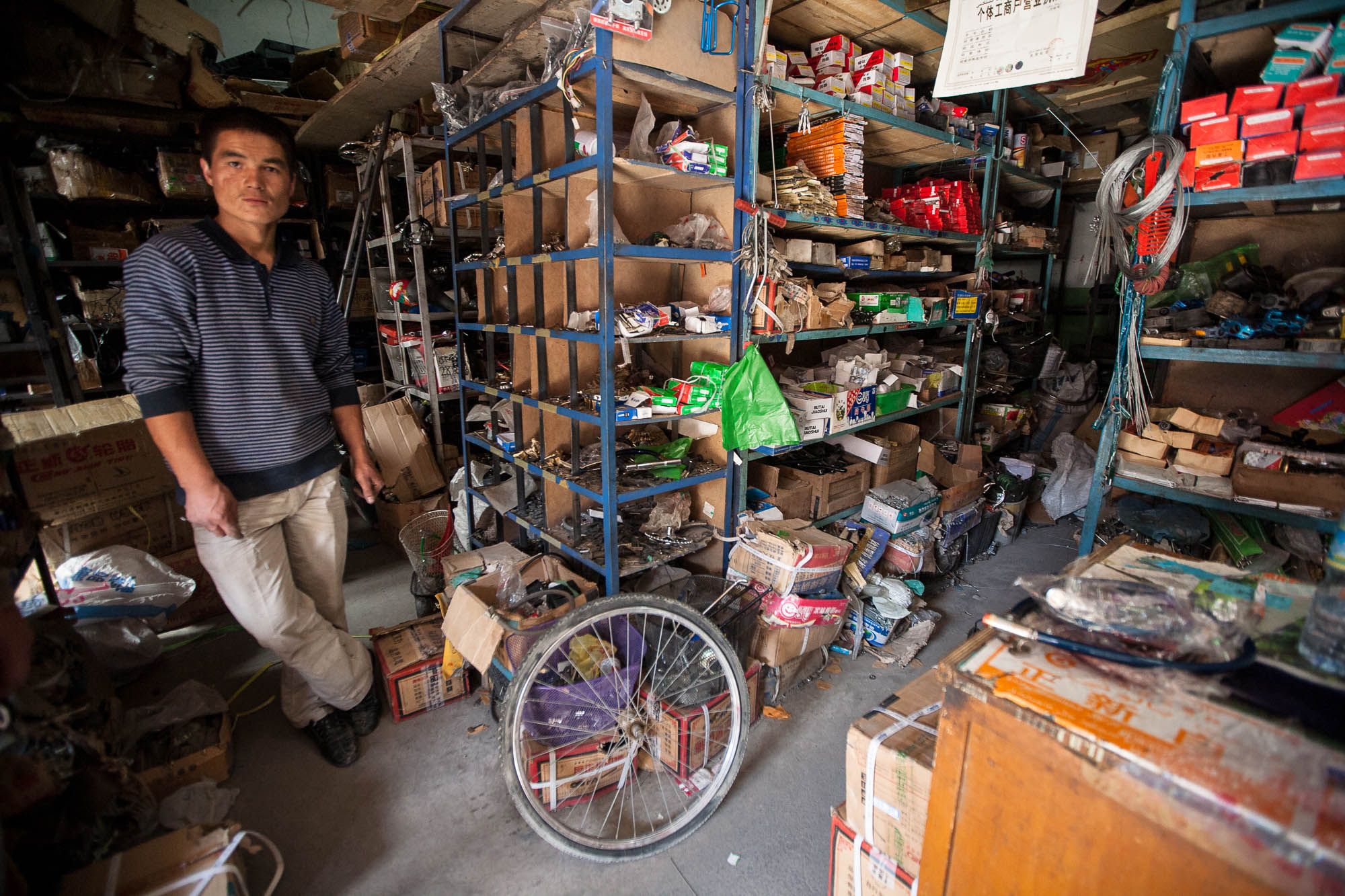 I fixed my Caboose today: All three wheels were screwed up and needed replacements. Cost me almost half as much as I had originally paid for the complete Caboose, but whatever, it had to be done. Then I went to the post office to mail some of my pictures home: You remember how enjoyable that […]

Posted on September 25, 2008 by Christoph Rehage 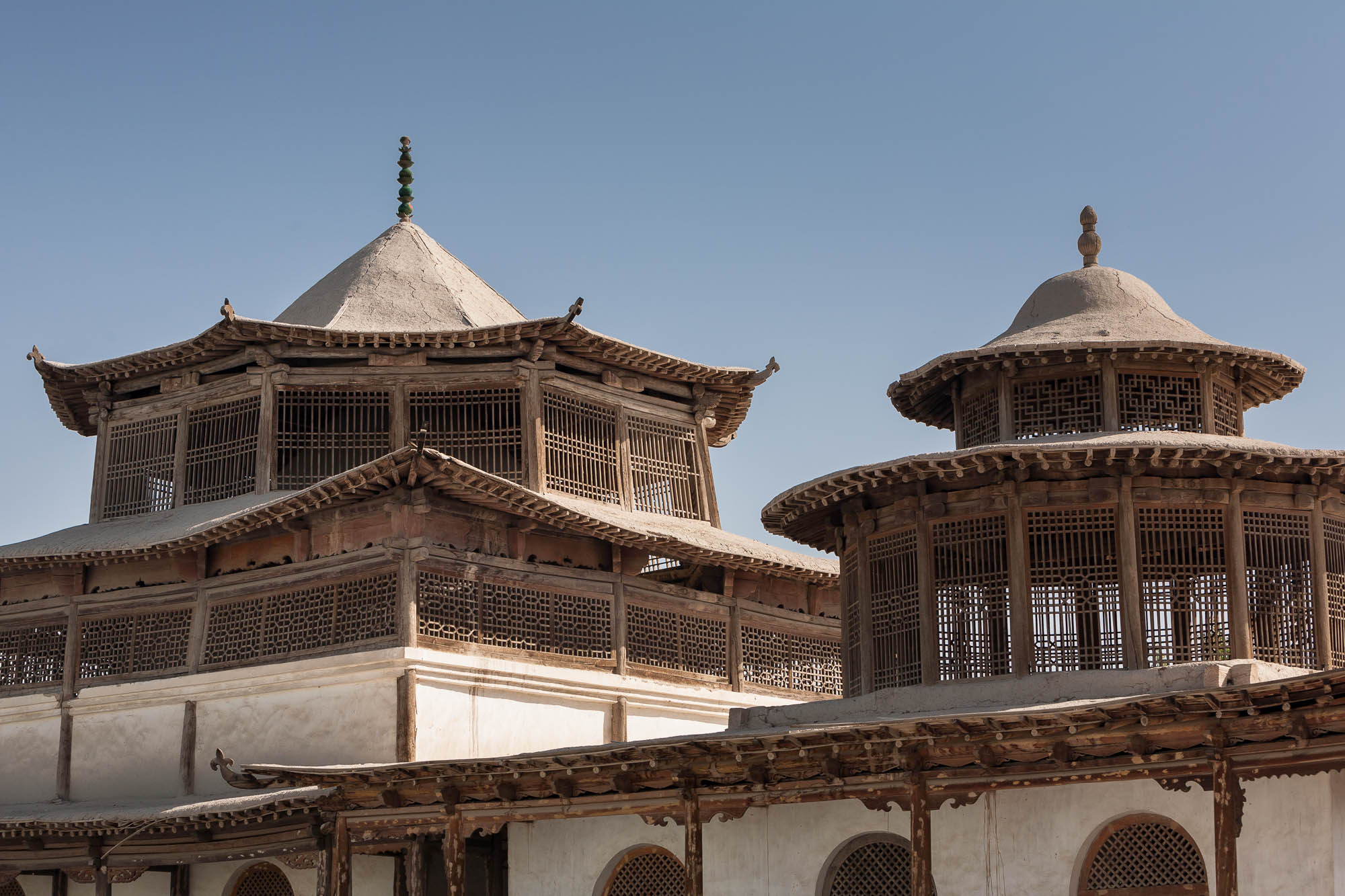 My friend Abdu (walking from Beijing to Bad Nenndorf) decided to take me out to see some of the city’s most famous sights today. One of those sights, and a very important place for Muslims in China, is the tomb of Gess Anzari Kaziyallahu: Remember I told you about the tomb of Wuaisi (overlooked & […]

are my eyes red?

Posted on September 24, 2008 by Christoph Rehage 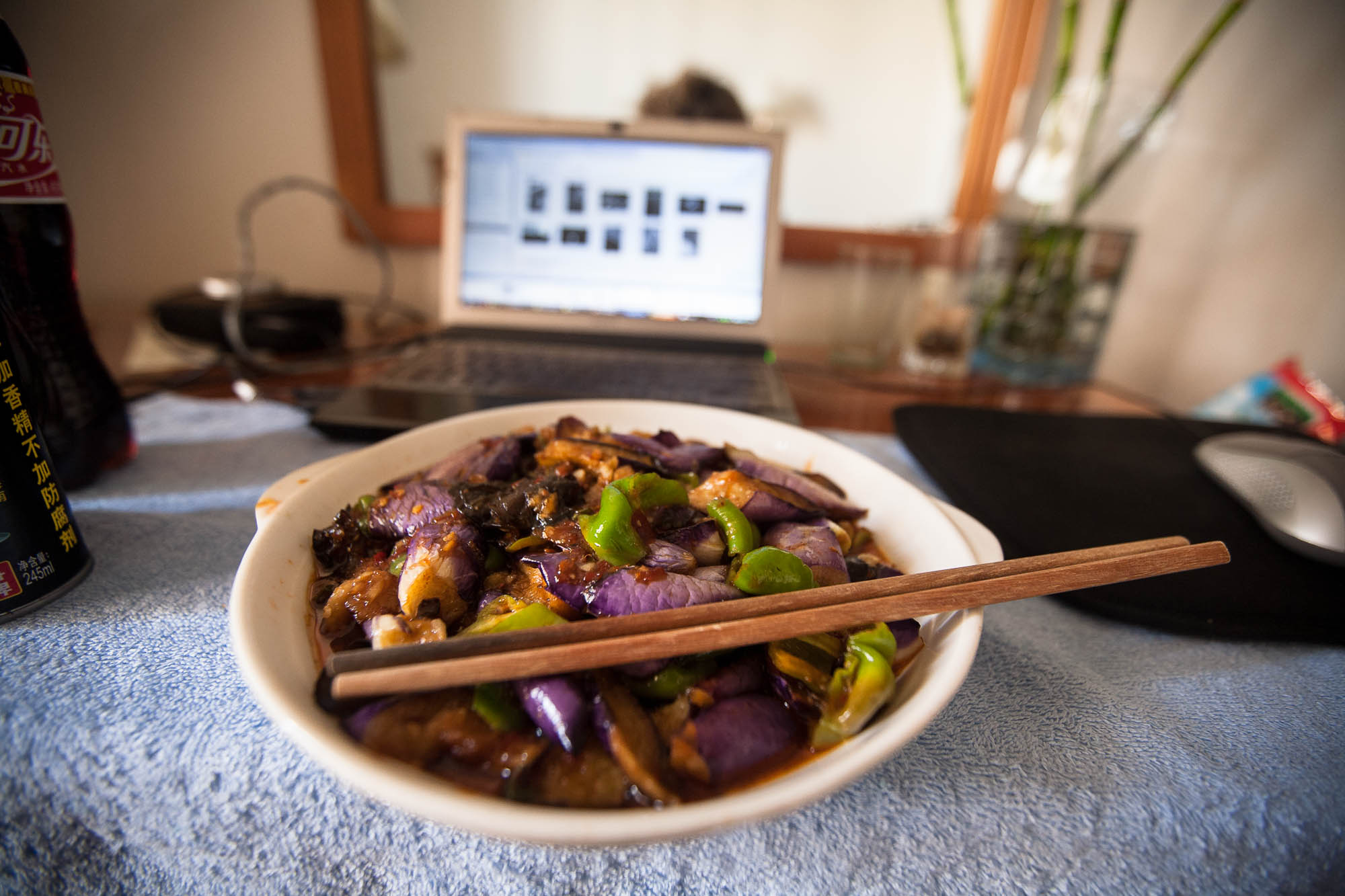 I’m still ordering room-service and drinking coke… Also, I recompiled the whole Walk from Paris to Bad Nenndorf 2003. …I think my eyes must be blood-shot and watery by now, but… no, they are still fine.

the impossibility of nothing

Posted on September 23, 2008 by Christoph Rehage 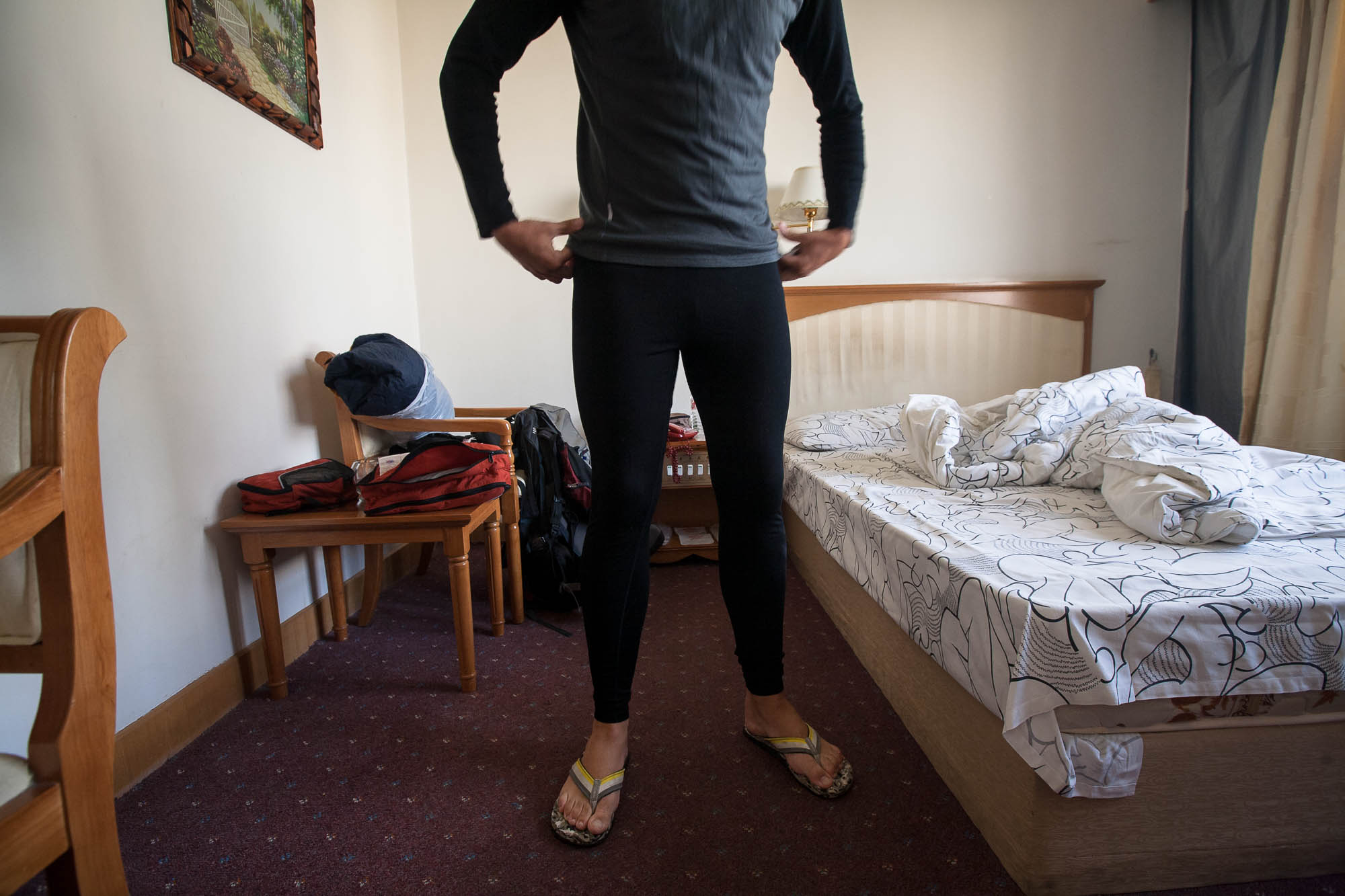 Okay, I couldn’t exactly allow myself to do nothing, even though that’s what I would have liked to do the most. But after all, I had fallen behind something like 10 days on my blog! You see, I’ve been struggling with bad connections and the lack of proper power supplies out in the desert recently, […]