This post is about snow in late April in Republika. I stay in and pass the time doing laundry and writing my blog.

When I woke up in a roadside guesthouse in the outskirts of Sofia, I found it hard to believe my eyes: it was snowing! Less than 24 hours earlier I had been sitting in a park in the sun, watching a squirrel and listening to the birds. And now I was looking at the late April snow covering the junk yard under my window.

I decided to not go anywhere today. The snow itself wasn’t the problem, but the road I would have to walk was very narrow and full of potholes, and it was extremely busy. I would have a difficult time on it even without the snow.

The guesthouse was nice. It was located in an industrial zone called “Republika” on the edge of Sofia, but the building was surrounded by a wall, and on the inside it felt pretty cozy. It had a restaurant where people came to eat, and where I got beans and salad and bread. During dinner I watched an obscure Hollywood action movie that had been dubbed into Bulgarian. Everyone seemed very angry in the movie, but I never figured out why.

Then I did my laundry. I carried a plastic bowl and some washing powder for this purpose. I soaked and I wrung, and when I had hung everything up to dry I got down on my exercise mat and did the stretches that were supposed to help with my knee.

There had been no pain in my knee for a week or so. But I didn’t trust it. 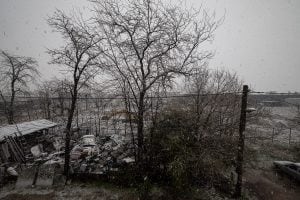 view from my window 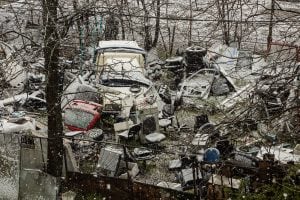 snow on the junkyard 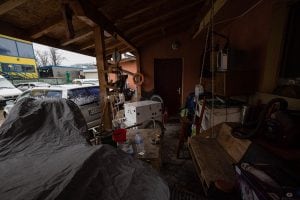 the Caboose in the yard 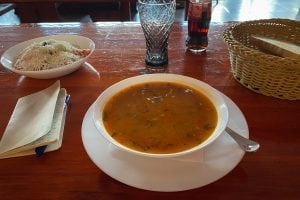