This post is about a 41km walk from Ihtiman to the Chapel Of The Virgin Mary. It is snowing heavily, and I pass a very cold village.

When I went out into the parking lot my heart sank. Everything was white, and it kept coming. I zipped up my jacket, put on my gloves, my hat, and my hood. I fastened all kinds of rain covers over the Caboose. Then I stepped onto the crunching snow.

It was both terrible and awesome at once. Terrible, because I knew it was going to be a difficult way through the hills today, and I had no idea where I was going to sleep. Awesome, because it was a beautiful adventure.

Walking was okay at first. The snow was only a problem when it got into my eyes, and the cold was only a problem because I couldn’t really take any rests – resting meant freezing almost instantly. But apart from that it wasn’t so bad, yet.

One time I noticed a light in the snow, and when I looked closer it turned out to be someone’s phone. I took it to a gas station and told them where I had found it, imagining that the person who lost it might actually get it back, and how awesome that would feel for them. And that made me feel happy for a while.

Then I started getting wet. First it was my gloves. Then my shoes. Then my pants. And then the wetness started creeping to the rest of my body. It was okay as long as I continued walking. But as soon as I stopped, it was unbearable.

The road had changed at this point. There were massive holes in it, and at one point I didn’t see a car for more than an hour. As the condition of the road continued to deteriorate, I started wondering if it led anywhere at all.

the village of no

I arrived at the village of Varakel after about 20 kilometers, feeling optimistic. The plan was to find some food and a place to sleep. There were a few shops, a café, a restaurant, and a gas station on the map. There was even a hotel in a village close by. If everything failed there was still a picnic area a bit outside of the village.

An hour later I was back on the road, walking. These had been some of the coldest people I had ever met. Their favorite word seemed to be “no”. Do you have a room? No. A place where I could sleep? No. Not even a garage or something? No. Do you know where I could pitch my tent? No. Can I order a pizza? No. Can I sit here and be warm for a few minutes? No.

When I got to the picnic area it was closed and fenced off with an alarm system and all. I wasn’t surprised, though. A guy at a gas station had given me an answer to the question if I could sleep in the picnic area: No.

And so I left the village of no, and I continued walking through the darkness and the snow. I was cold, and everything was wet. At some point the wetness was so profound that my phone refused to be charged. Water had gotten into it.

That’s when I noticed the tracks in the snow. At first I thought they were from a dog. But they were too big for that, and the position of the claws looked different. These weren’t dog tracks. They seemed to be bear tracks.

The motel parking lot in the morning: 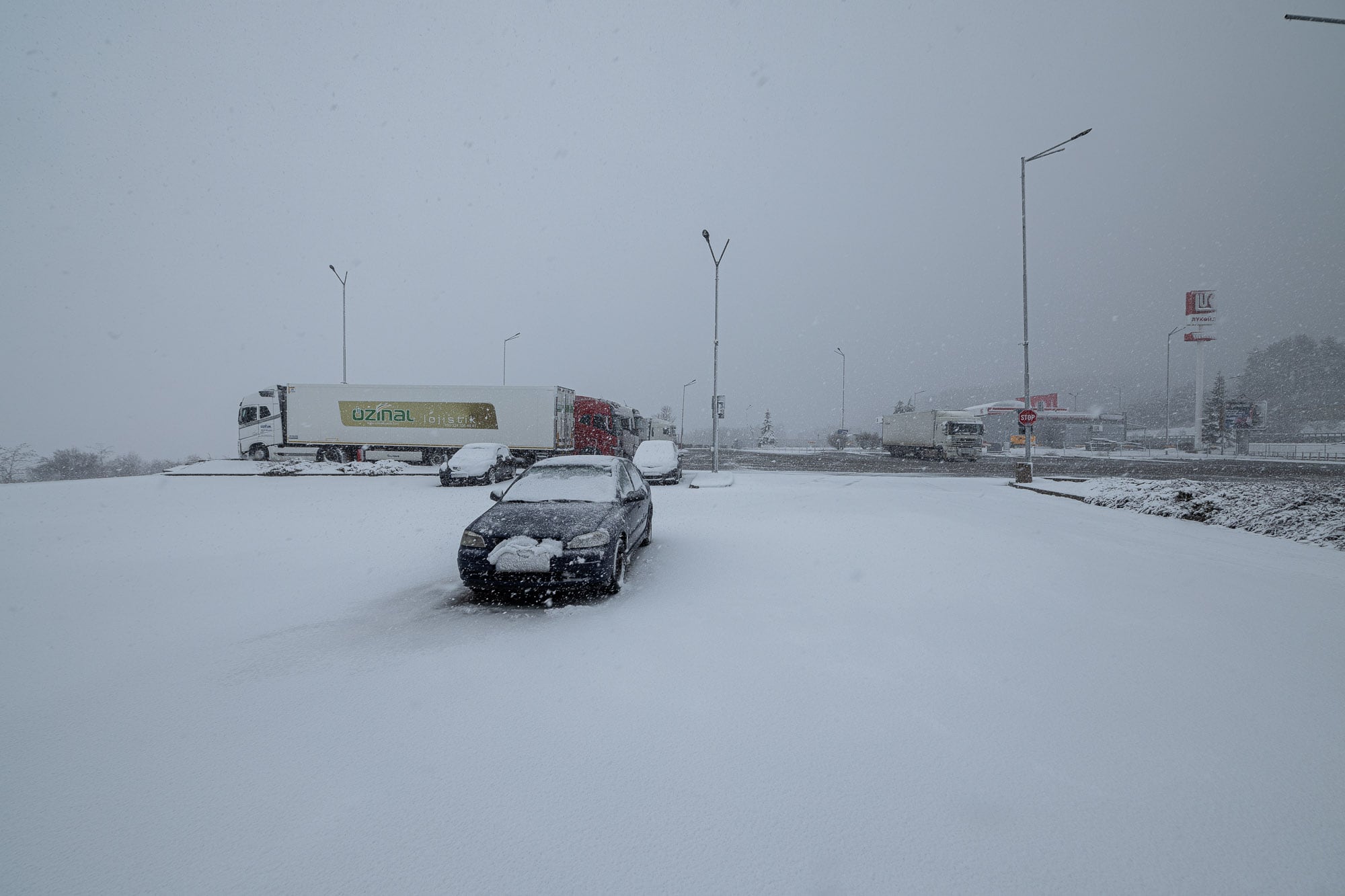 The snowy road to walk from Ihtiman to the Chapel Of The Virgin Mary: 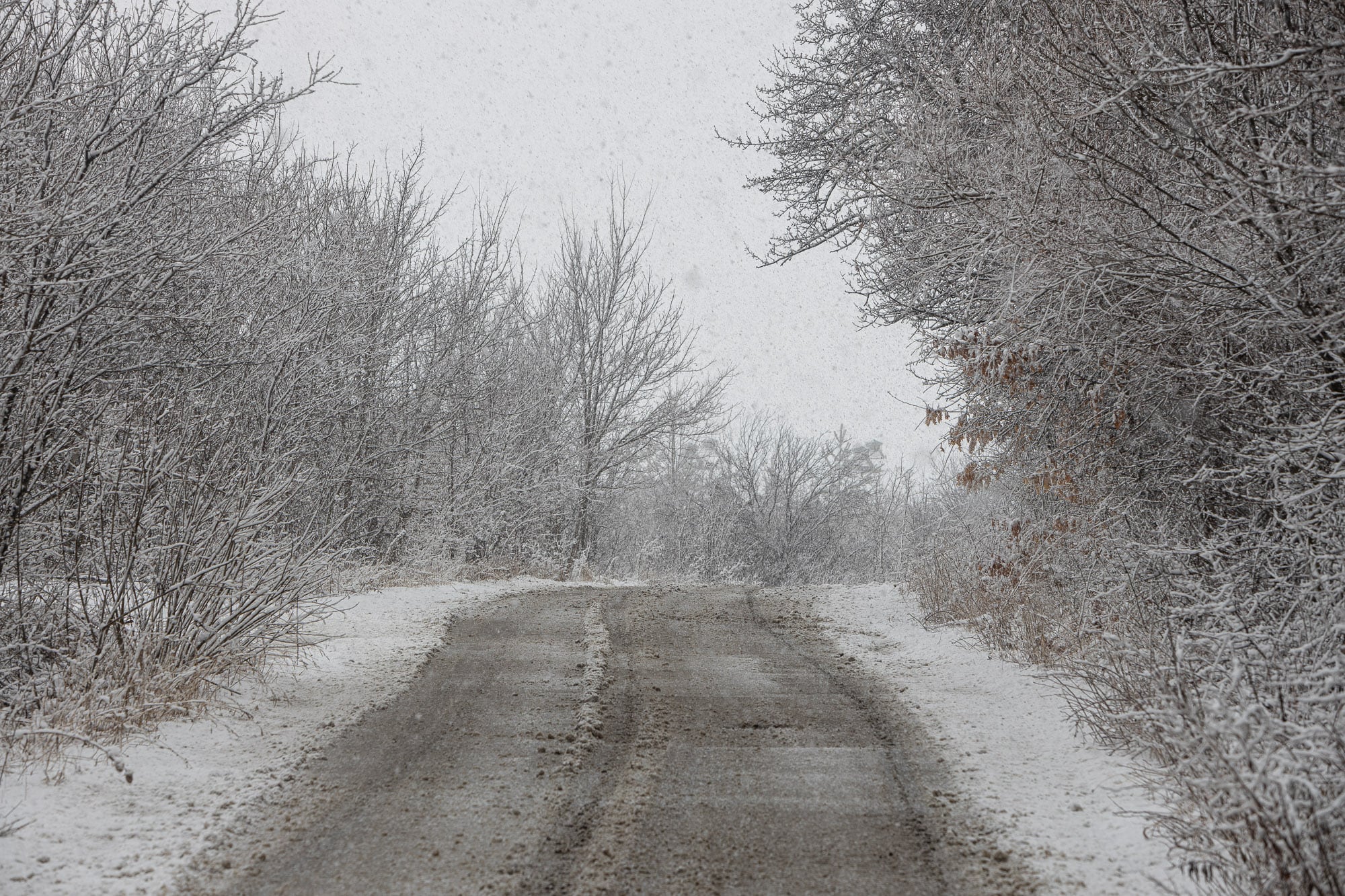 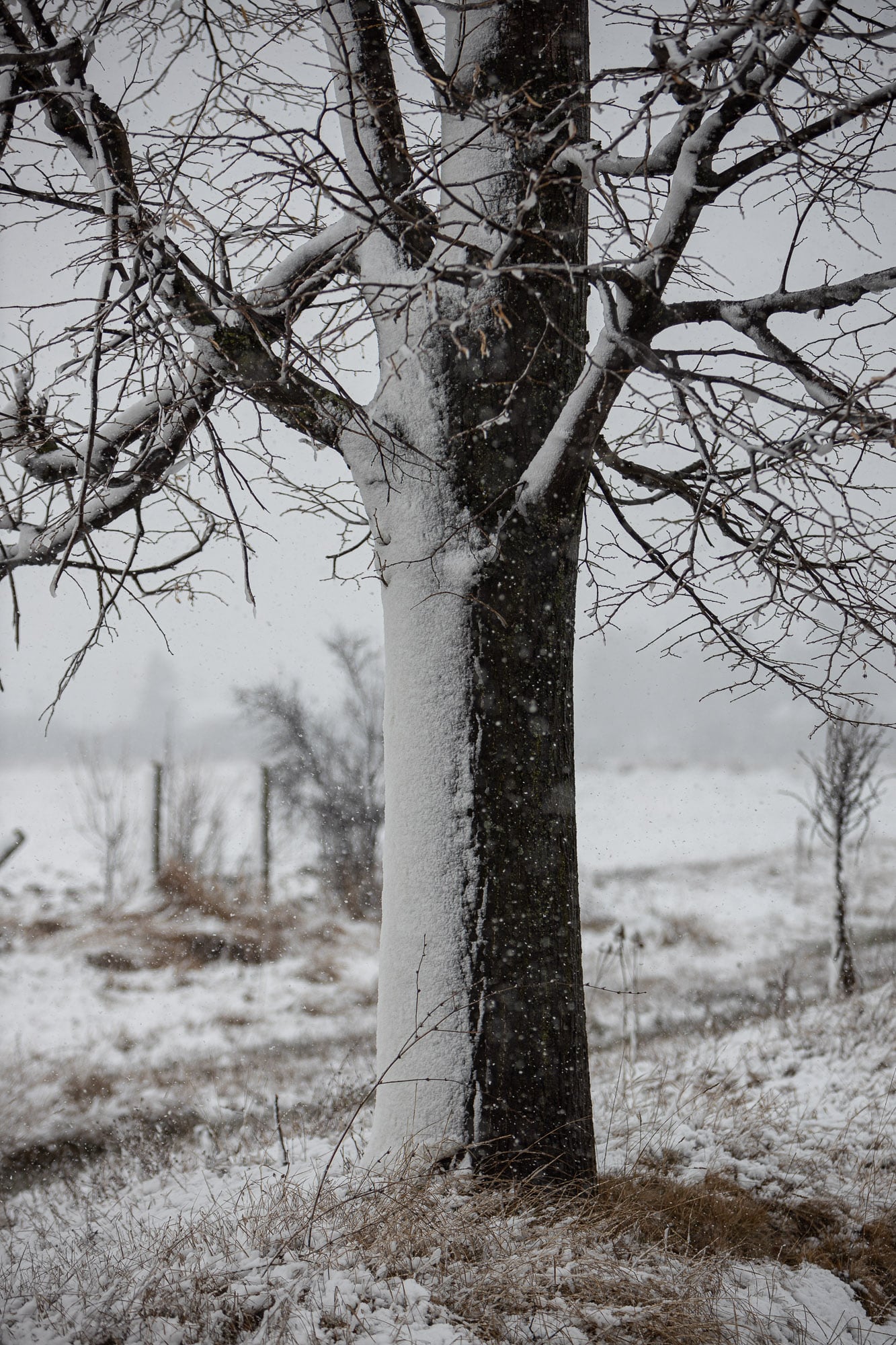 The Caboose having fun: 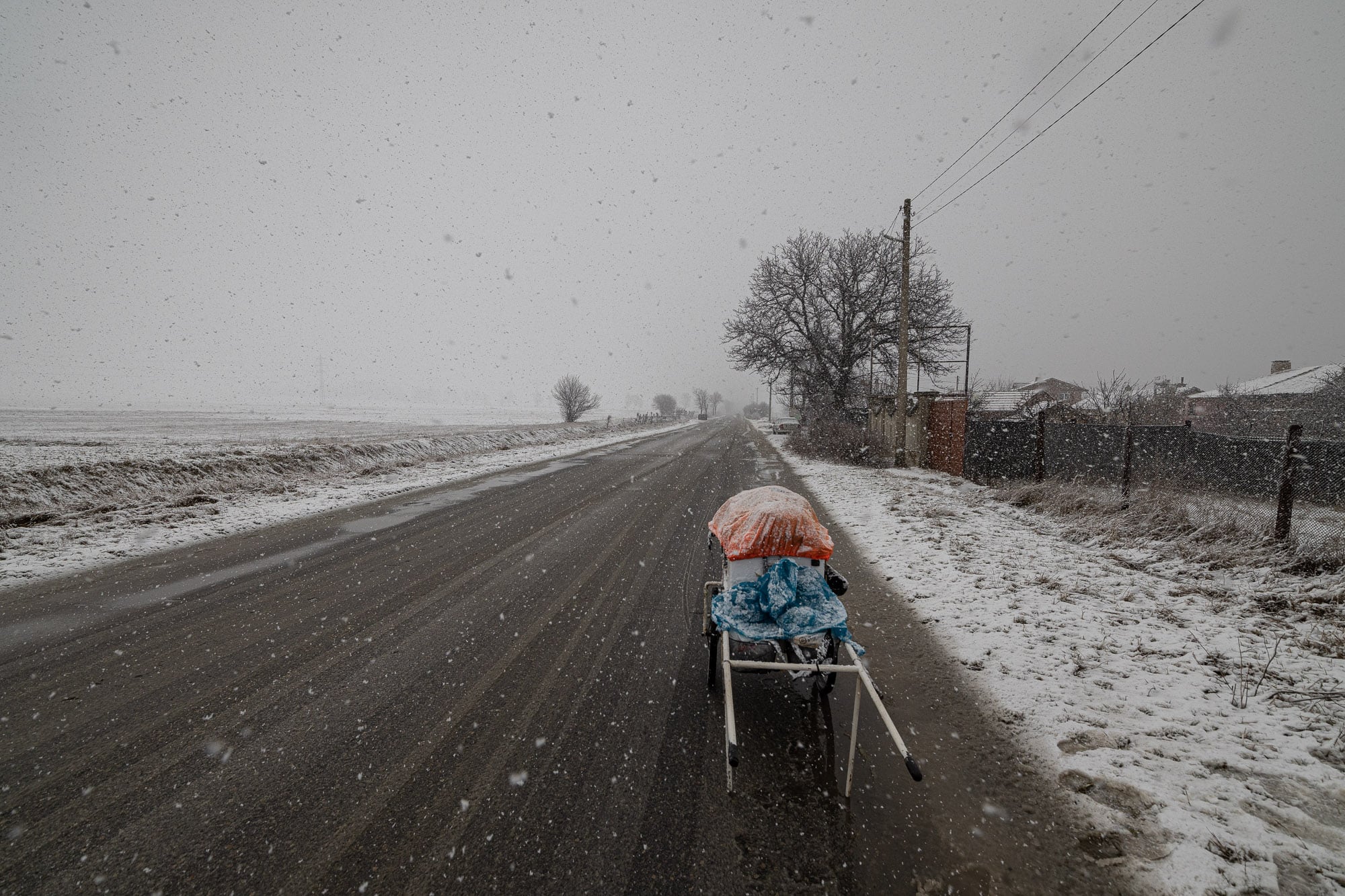 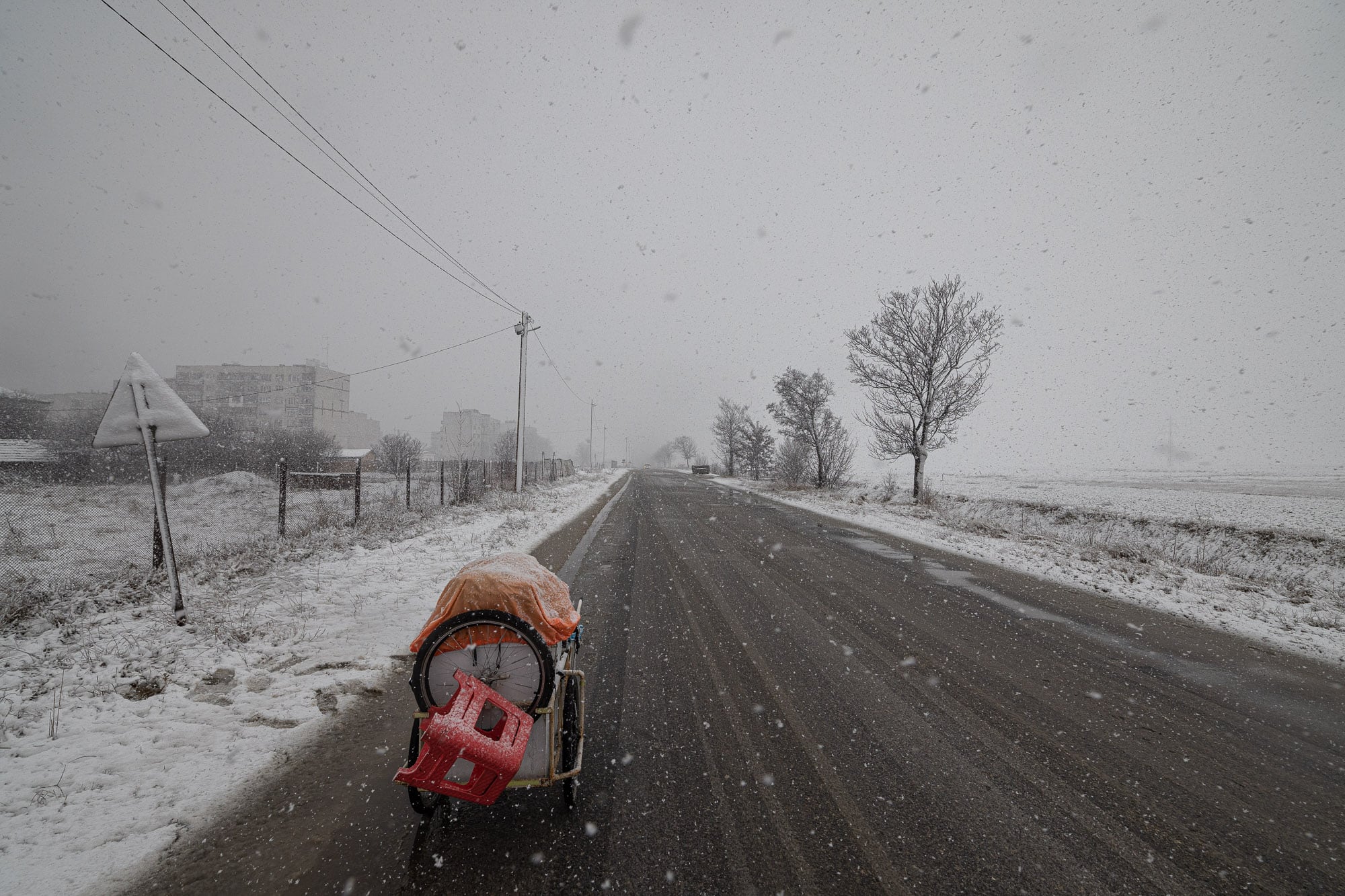 Prefab buildings in the snow: 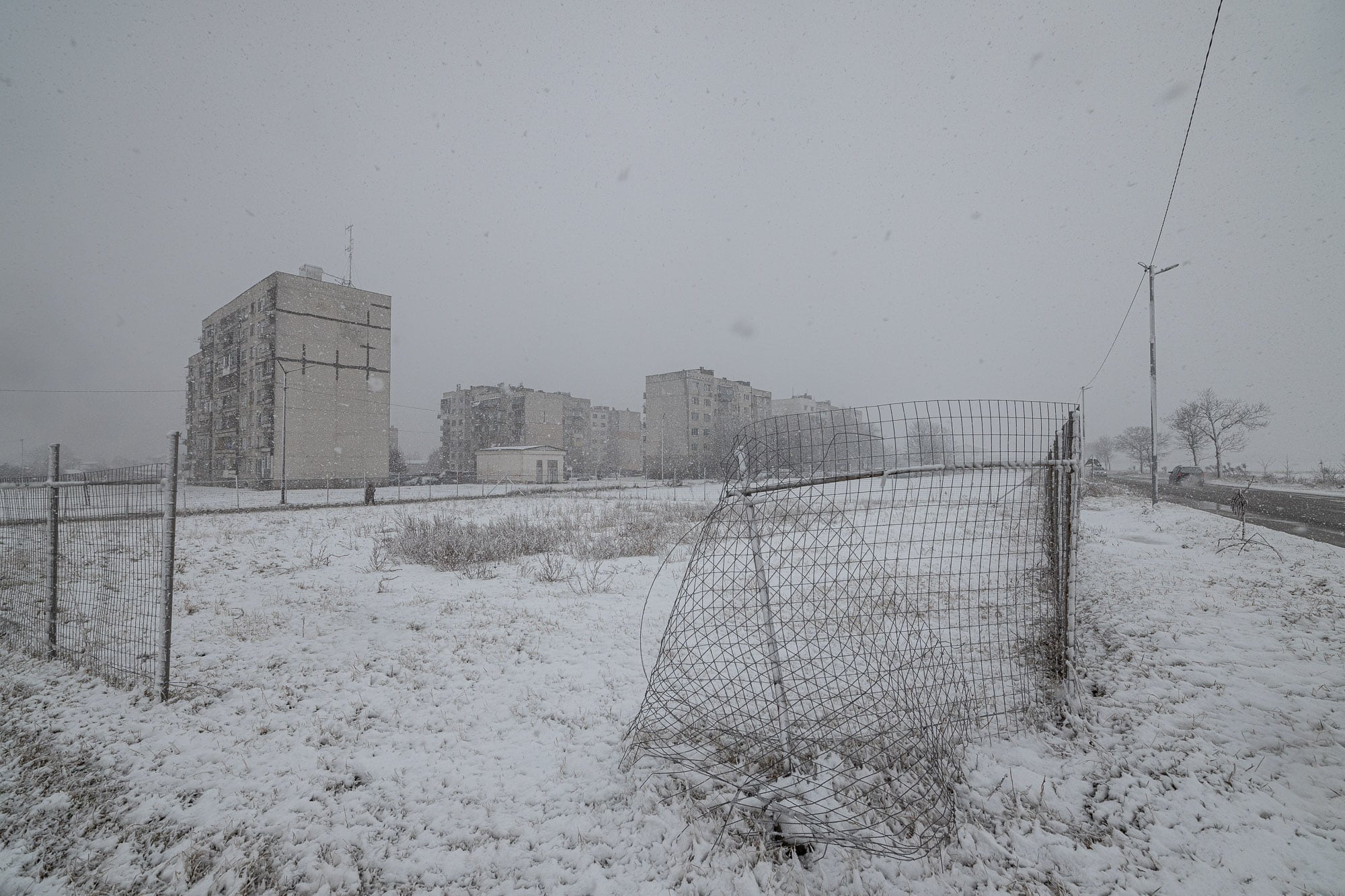 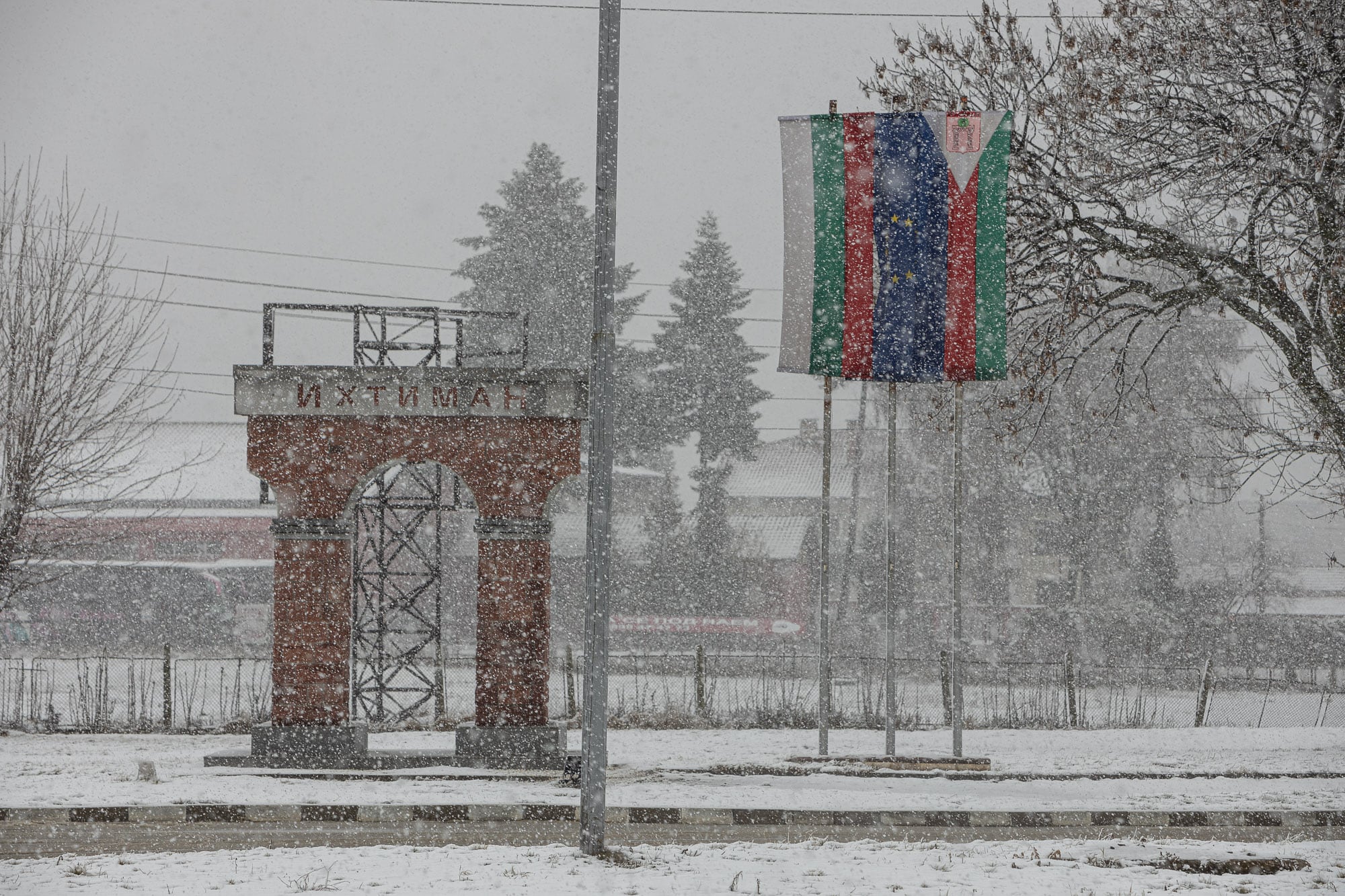 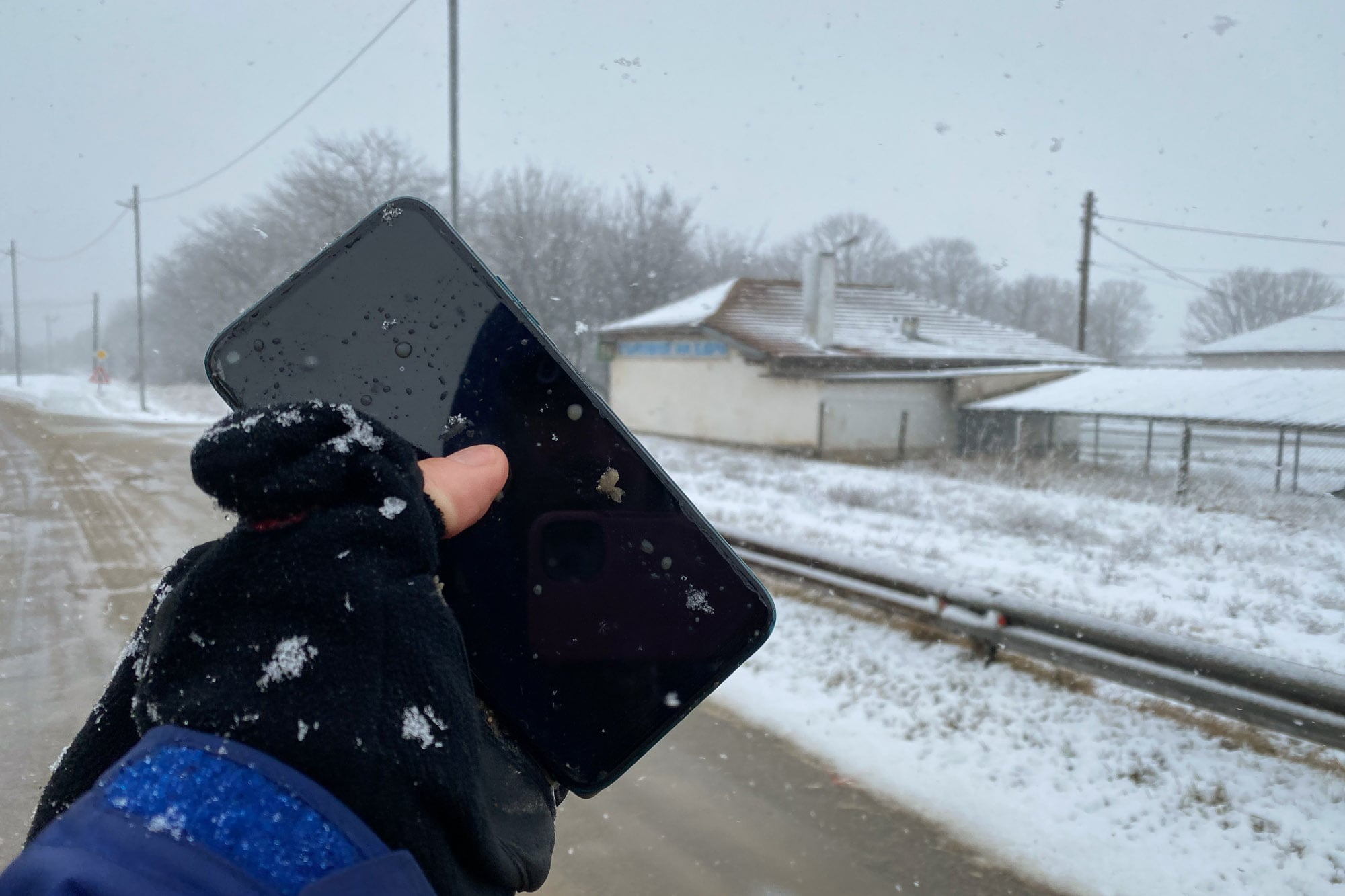 Memorial to a man near Ihtiman: 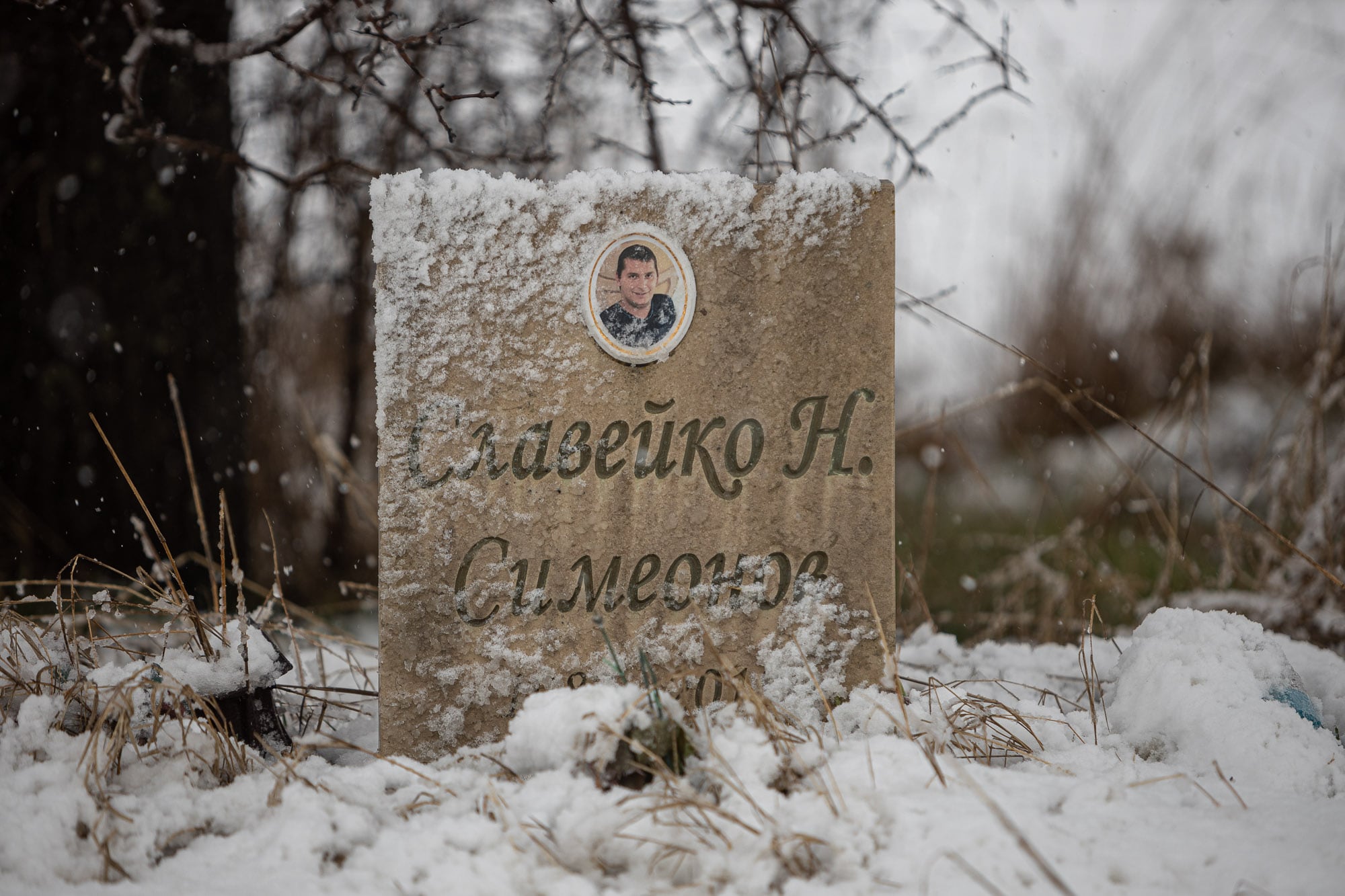 The beginning of the bad road: 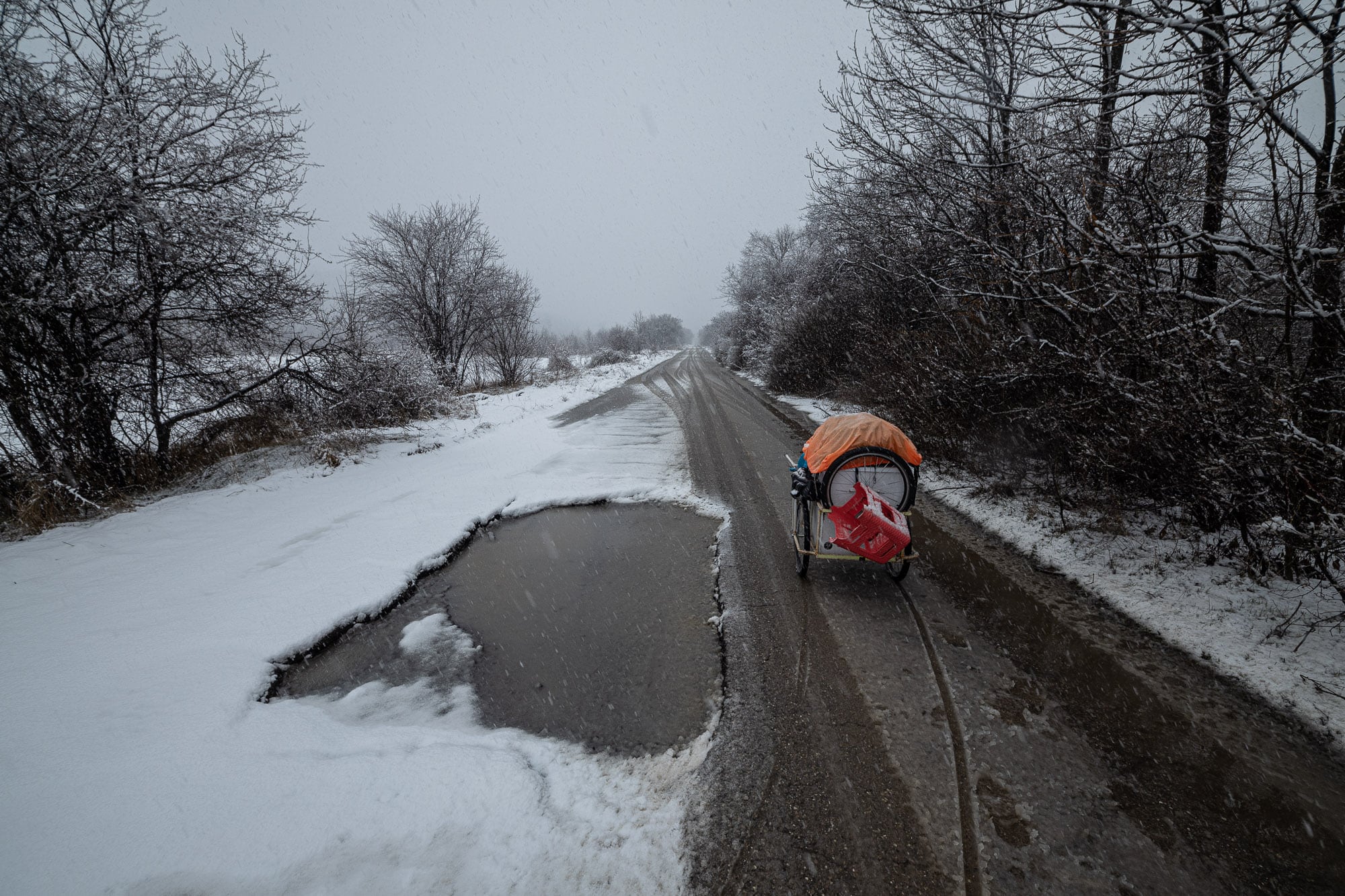 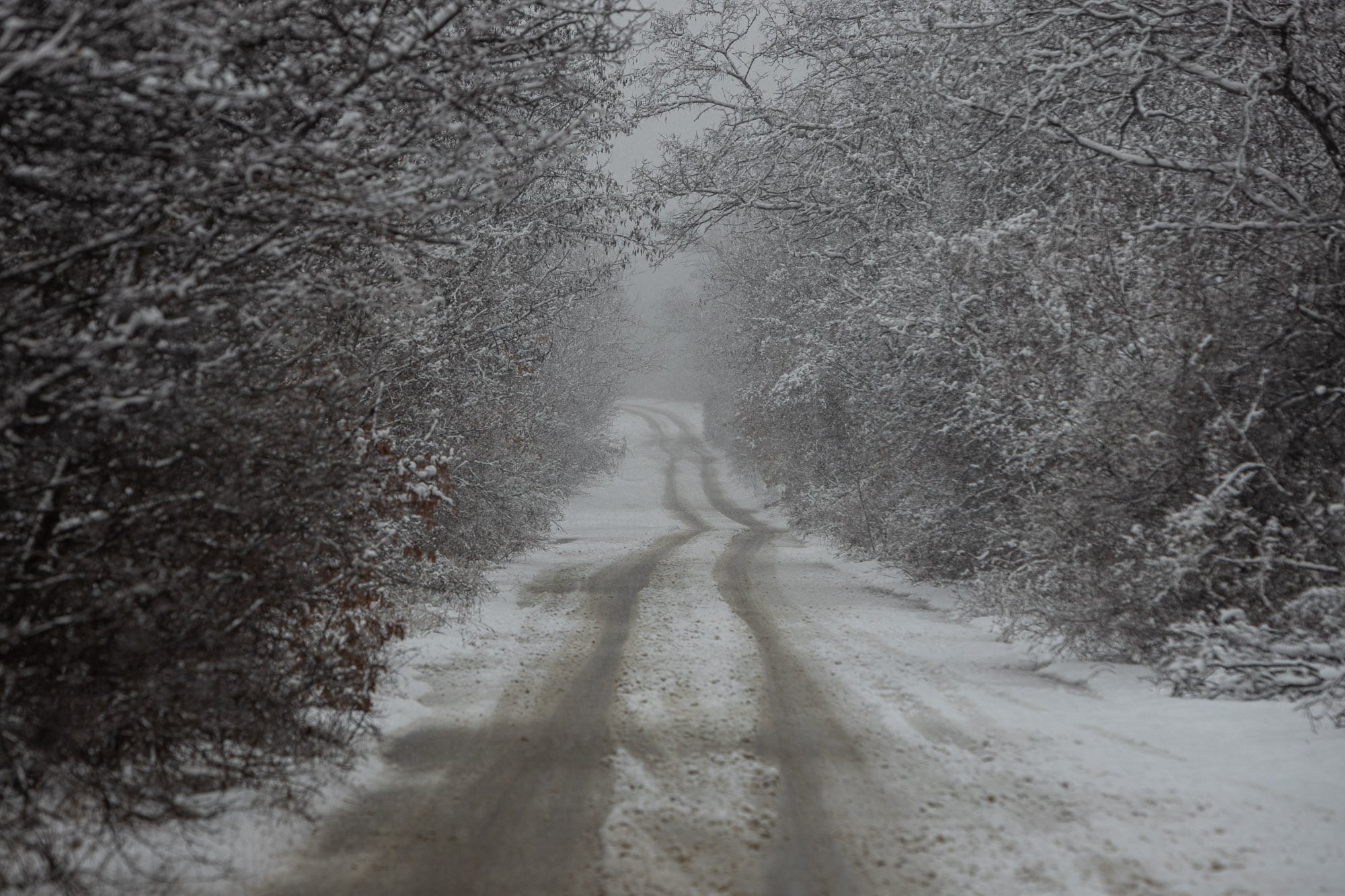 Drone shot of the wintery road: 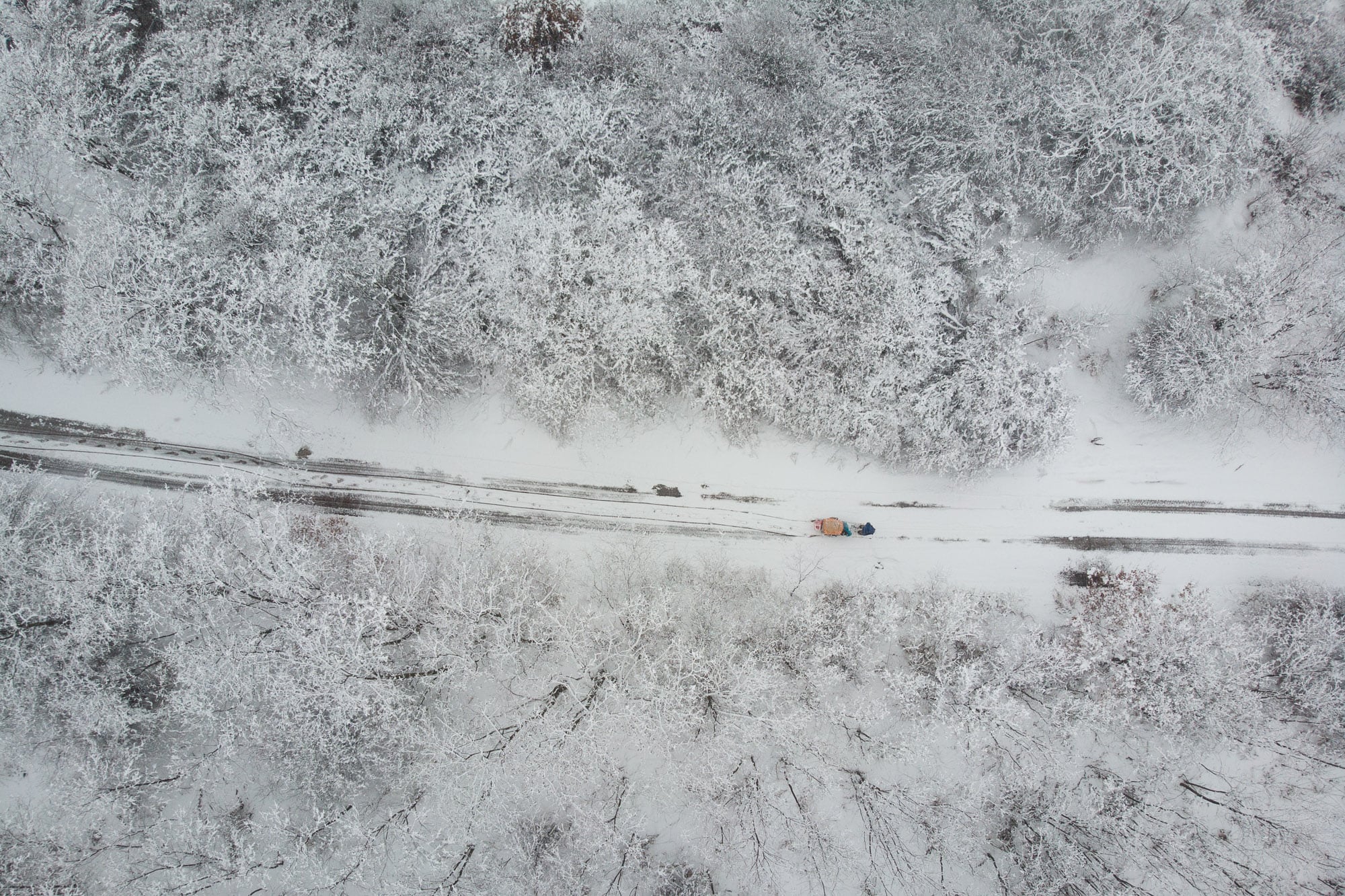 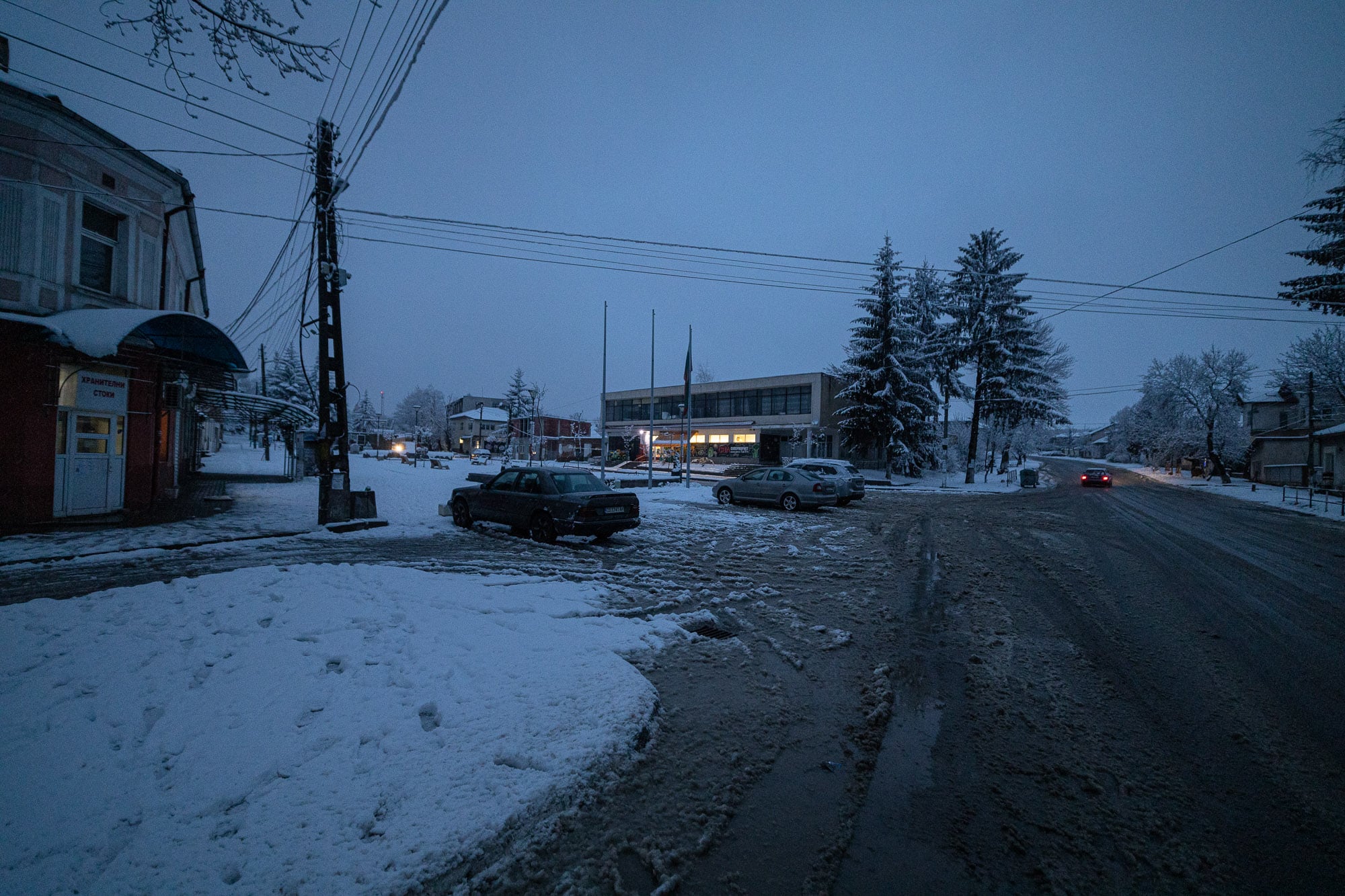 Are these bear tracks? 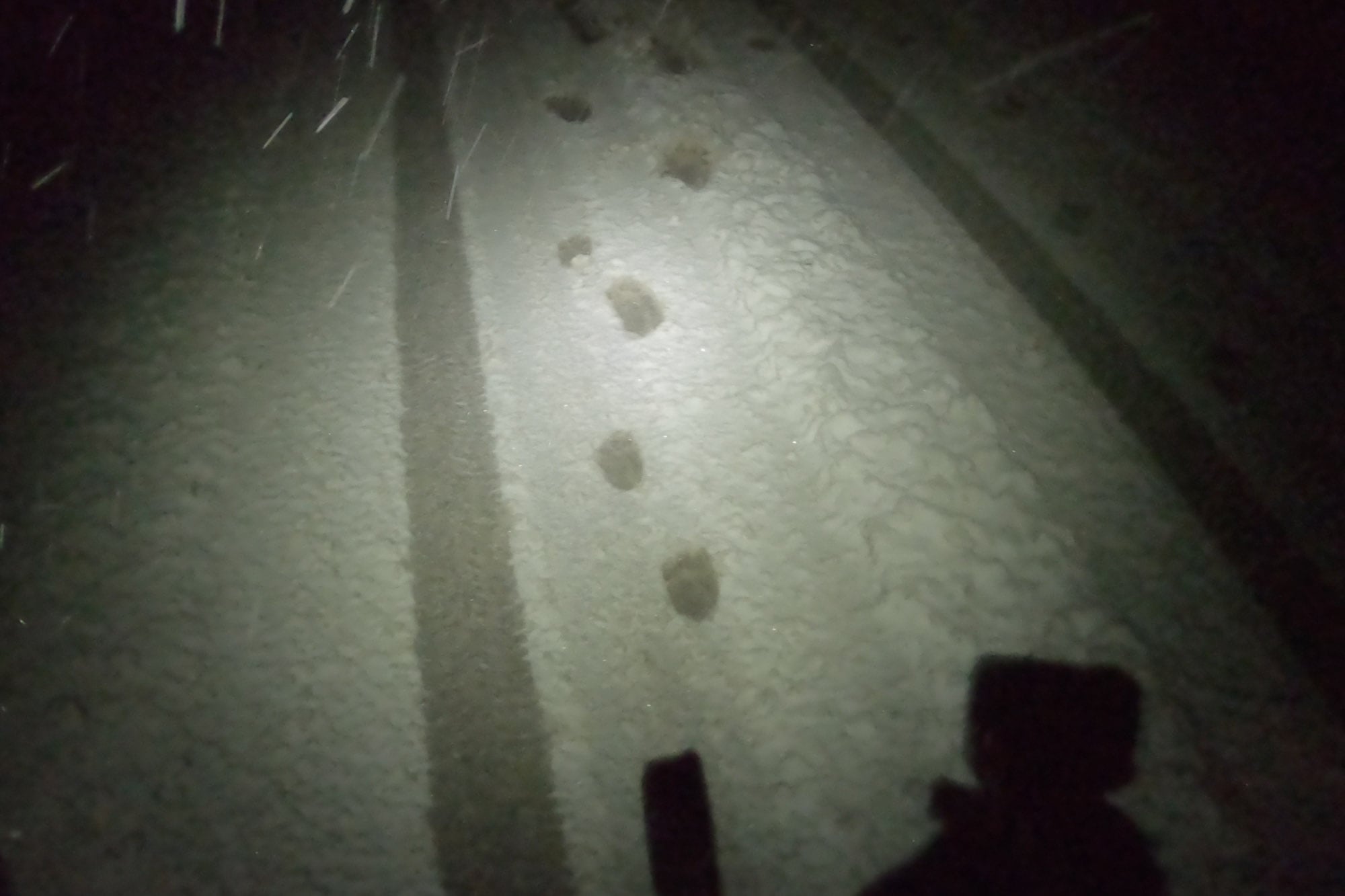 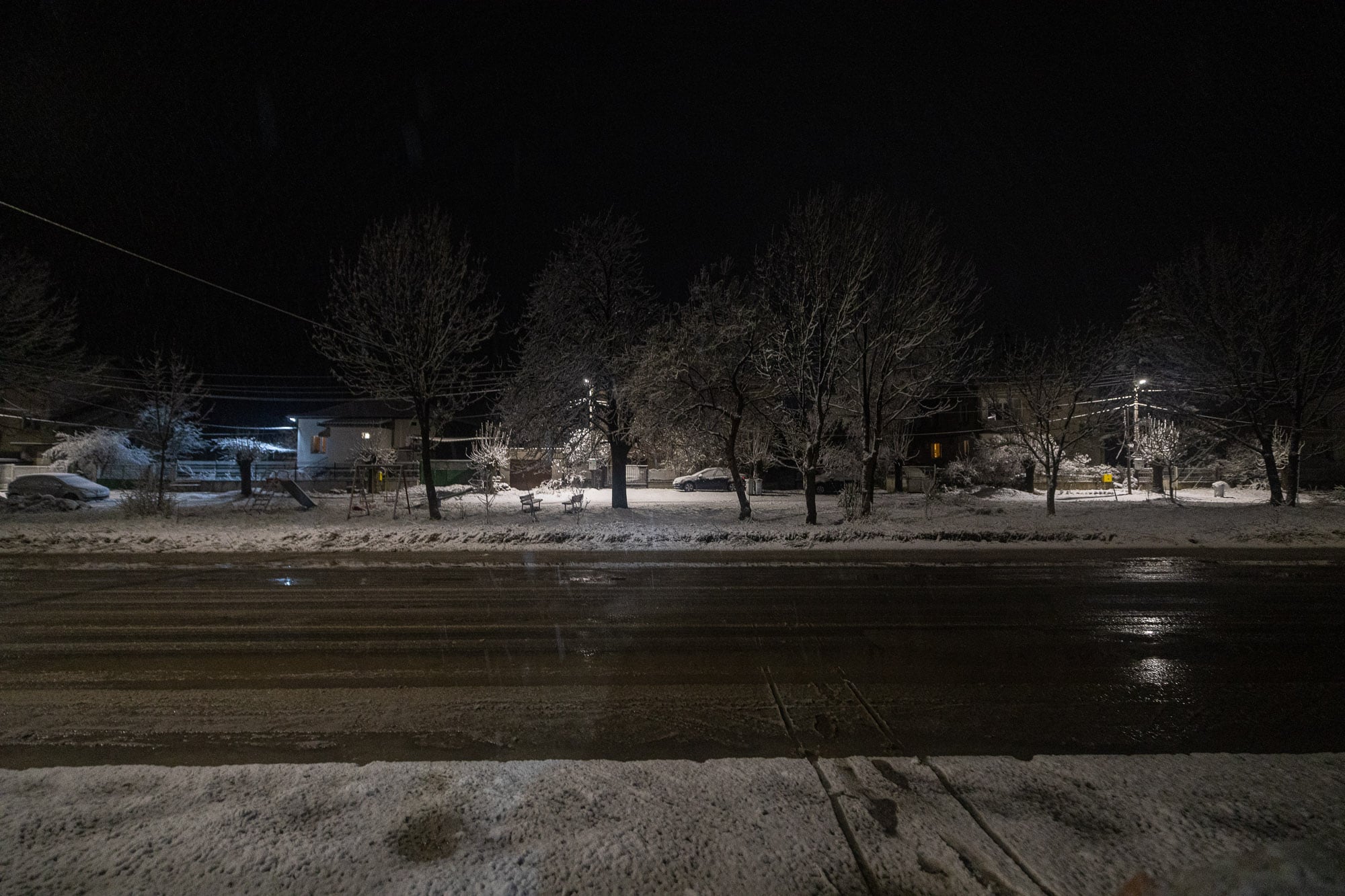 Camp in an abandoned building near the Chapel Of The Virgin Mary: 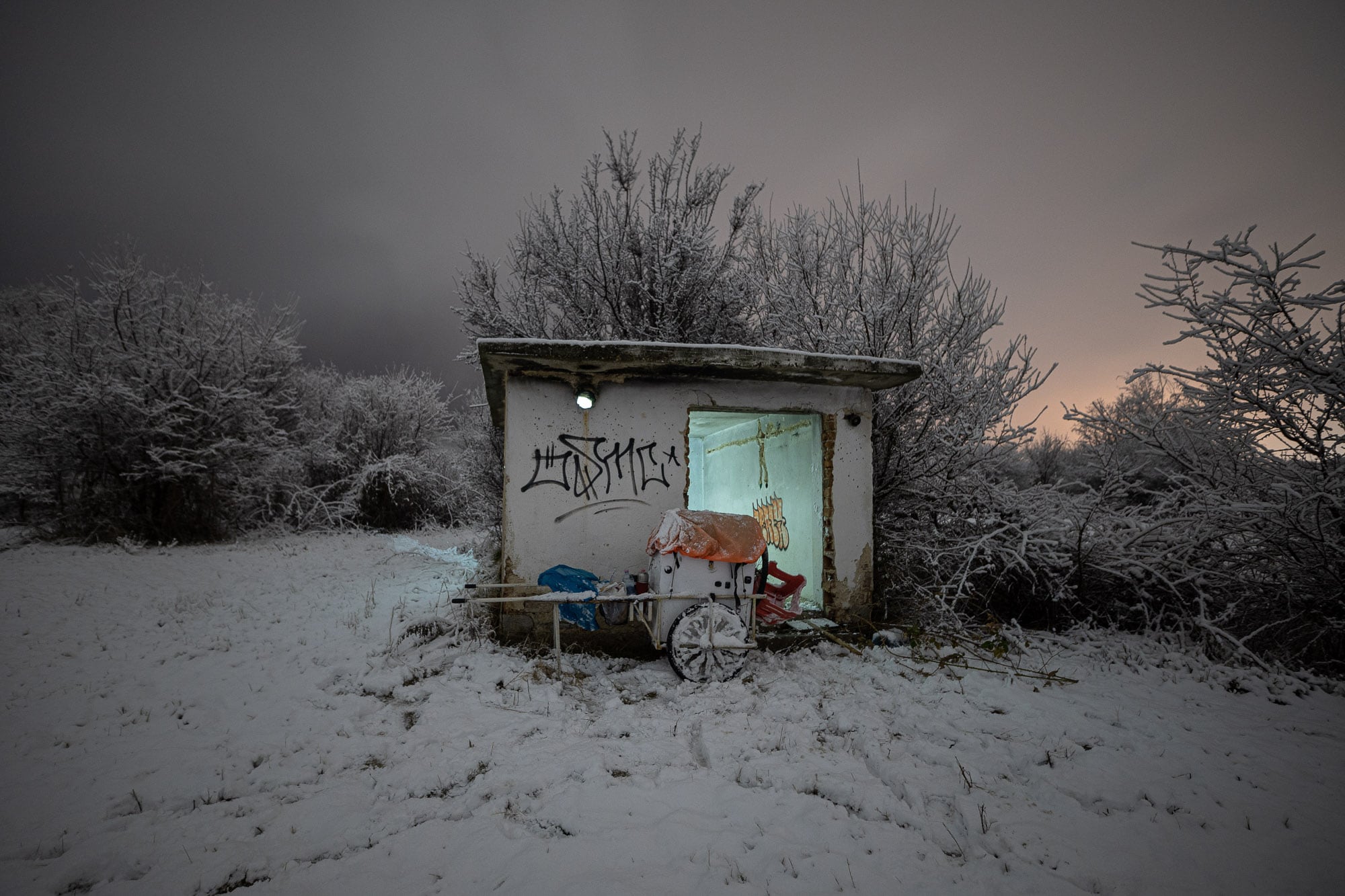 Day 532
from Ihtiman to Chapel Of The Virgin Mary