This post is about a 14km walk from Agva to Imrenli. It rains all day, but in the end I get good food and a poncho.

Three days it had rained without stopping. The pavement was wet, the air was wet, the dogs were wet, everything was wet. When I went to a restaurant to have dinner there was a bucket in the corner where the roof was leaking. I ordered a cheese pizza.

Agva didn’t feel like a bad place to be stuck in, but I didn’t like being stuck. And so on the fourth day, when the weather report said the rain was going to ease up a bit, I packed my stuff in the morning, and then I sat there, waiting.

I started walking at noon, but it didn’t go as I had hoped. The rain came back after five minutes, my feet were wet after ten minutes, and an hour or so later even my underwear was wet.

There was nothing I could do. I preferred windbreakers over rain jackets, I didn’t like wearing waterproof hiking shoes, and I didn’t own a poncho. I told myself that I was lucky: at least it wasn’t windy.

the lies and the pity

But there were hills. I remembered how people had been telling me about the flat land I was supposed to enter after Zonguldak or Eregli, but those had been lies. Shameless, vicious lies.

The road kept winding its way up and down, away from the coast and through the hills and the forest, and the villages were all very quiet. People hardly left their houses in this kind of weather. One time I saw an old man in front of a tea house. He was standing under a canopy, sheltered from the rain, and when his eyes met mine I thought I saw something like pity in them. We both said Merhaba, then I continued stomping through the rain.

I arrived in Imrenli in the afternoon. There were supposed to be some hotels and guesthouses there, but I wasn’t sure if any of them were operating during the off-season.

When I noticed a beach restaurant with some people in it, I decided to ask them if they knew anything. And they did. They waved me in, gave me hot tea, and told me to warm up by the oven. Then they called a guesthouse for me. I got a dish of grilled eggplant and another one of grilled pumpkin, and we sat and talked for a while.

Their names were Fatih, Yilmaz, and Tekin, and before I left, they gave me a poncho.

They wanted me to be a bit less wet in the rain.

The road to walk from Agva to Imrenli: 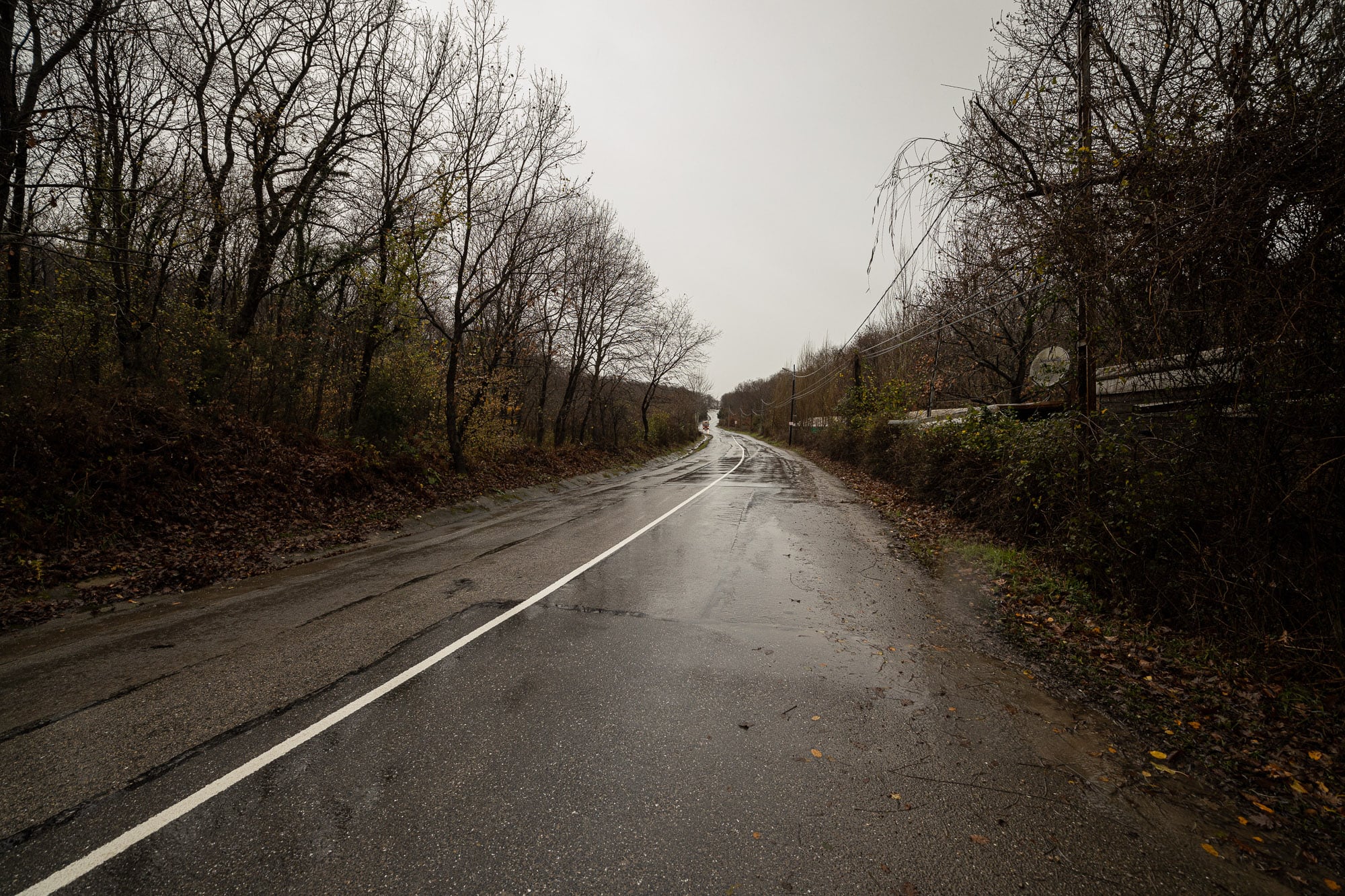 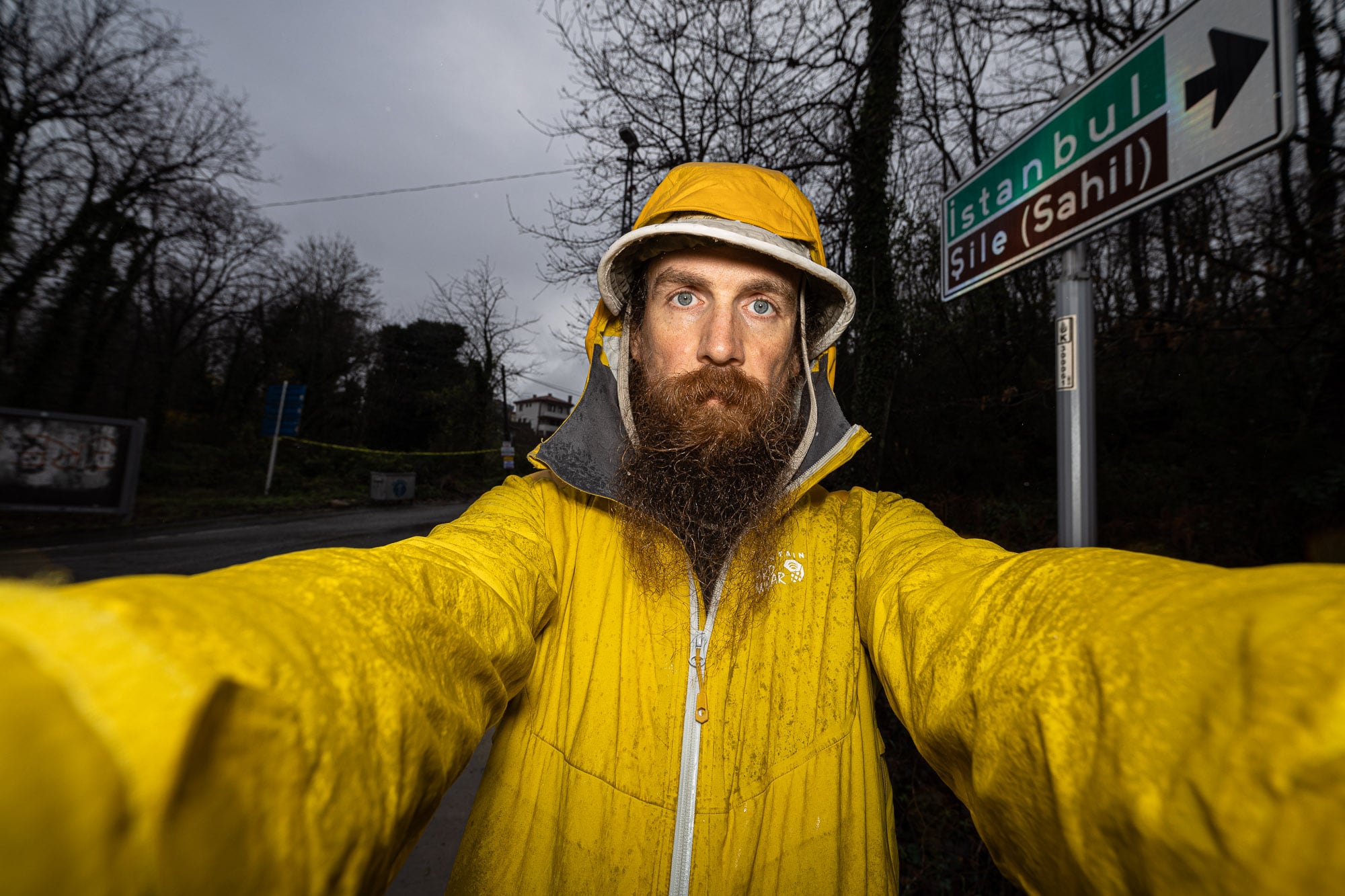 The Caboose in the rain: 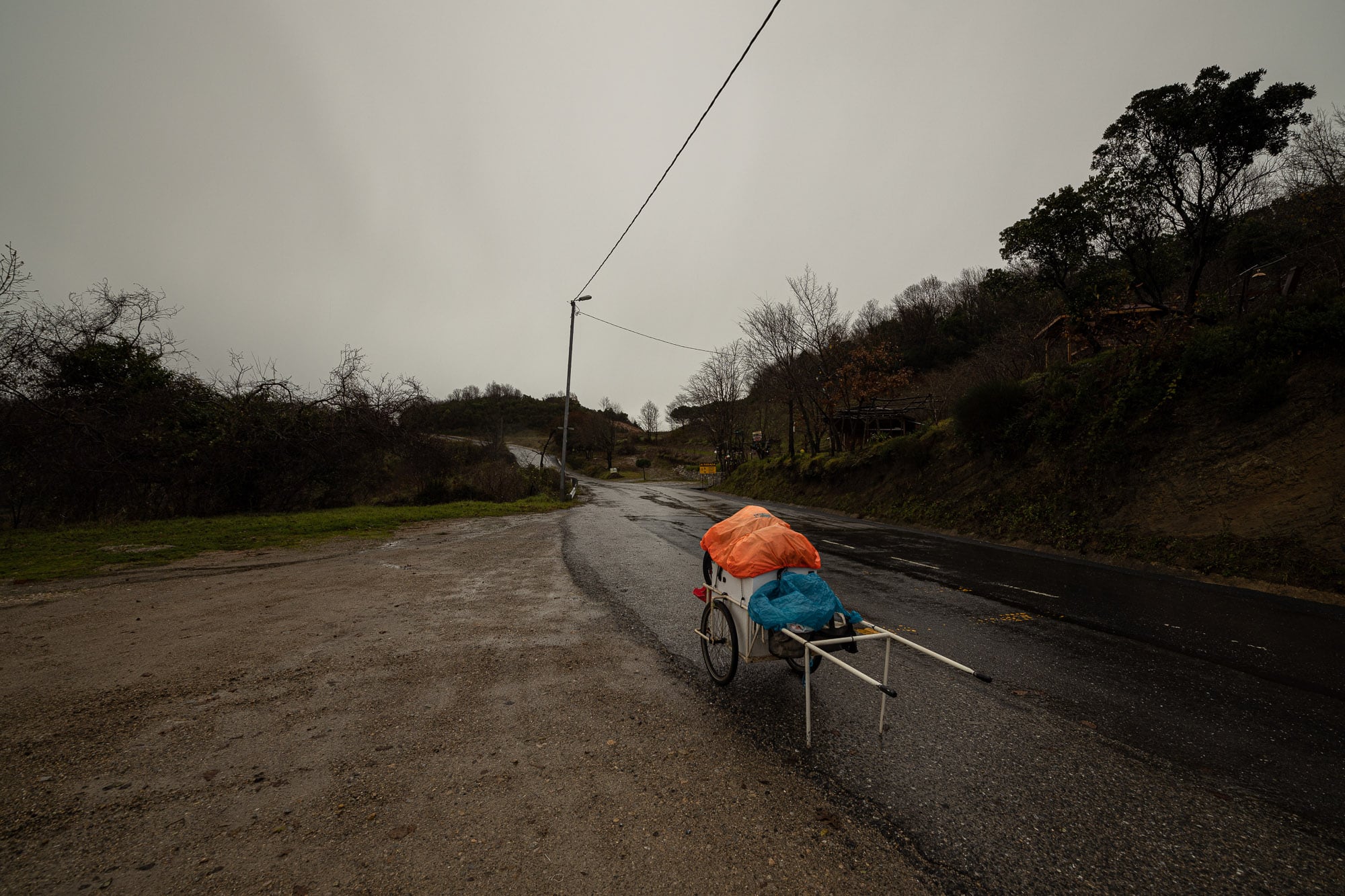 Selfie in one of the slopes between Agva and Imrenli: 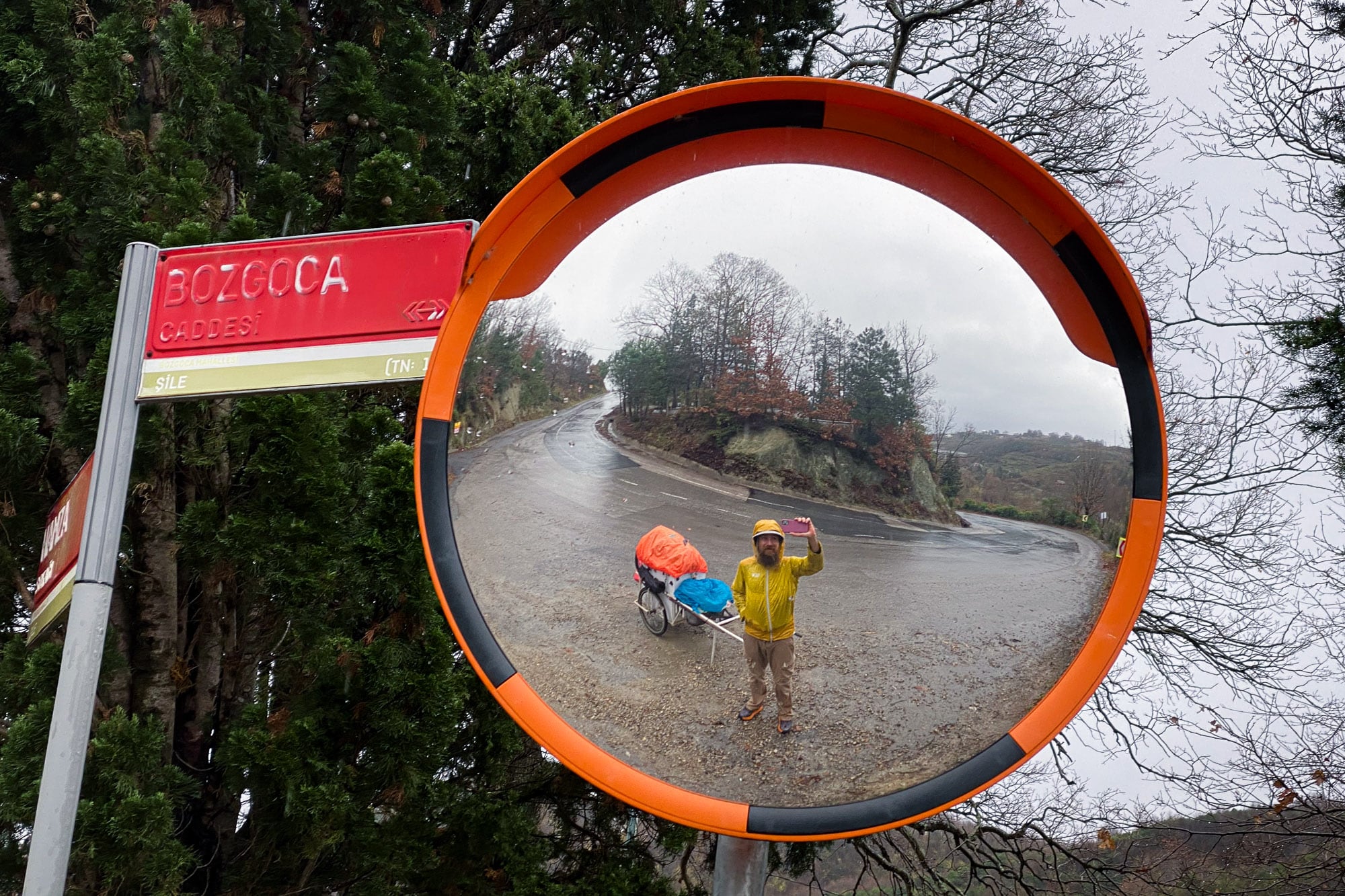 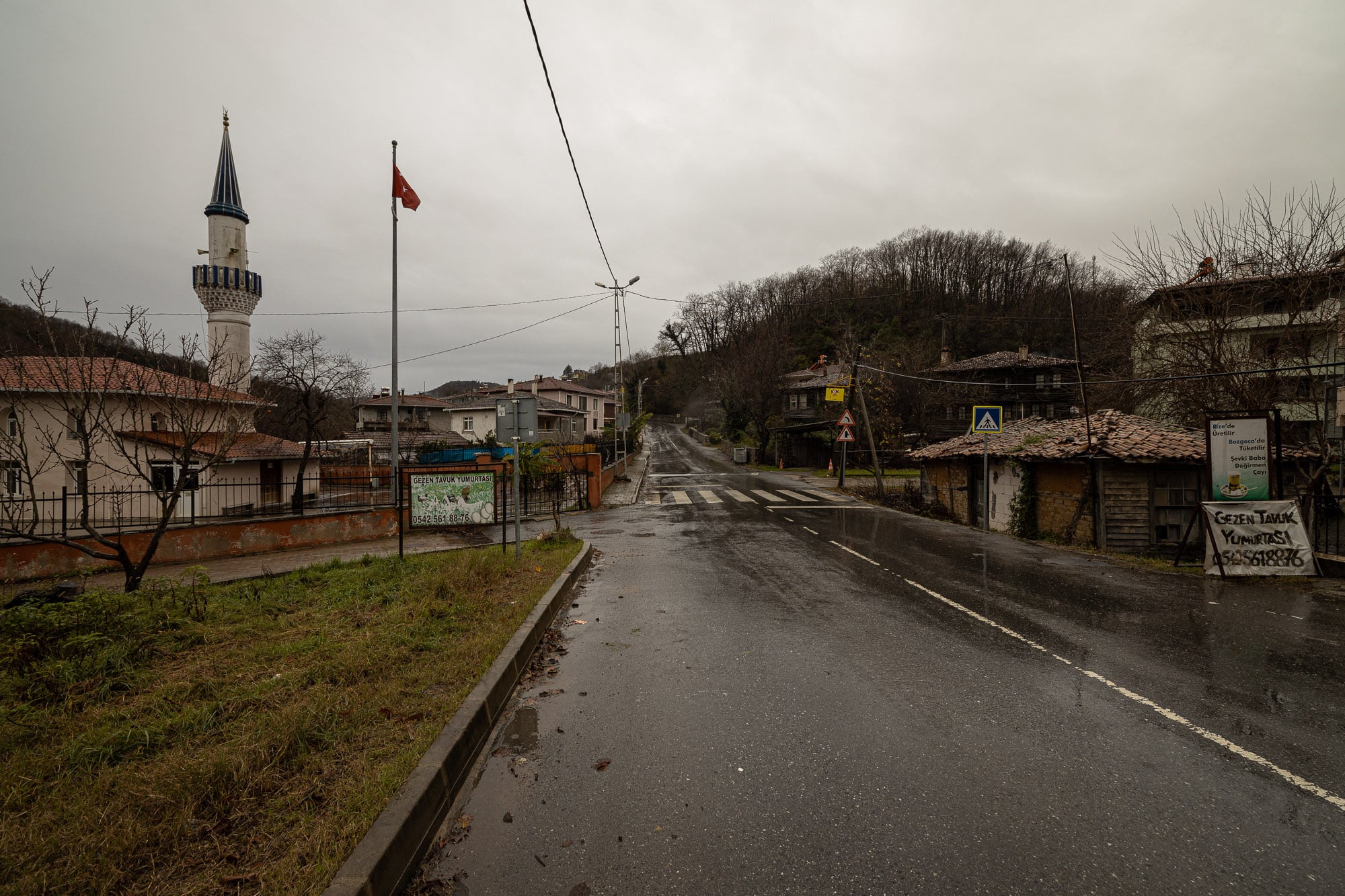 “Turkey Is Our Home, And Erdogan Is Our Dad” slogan: 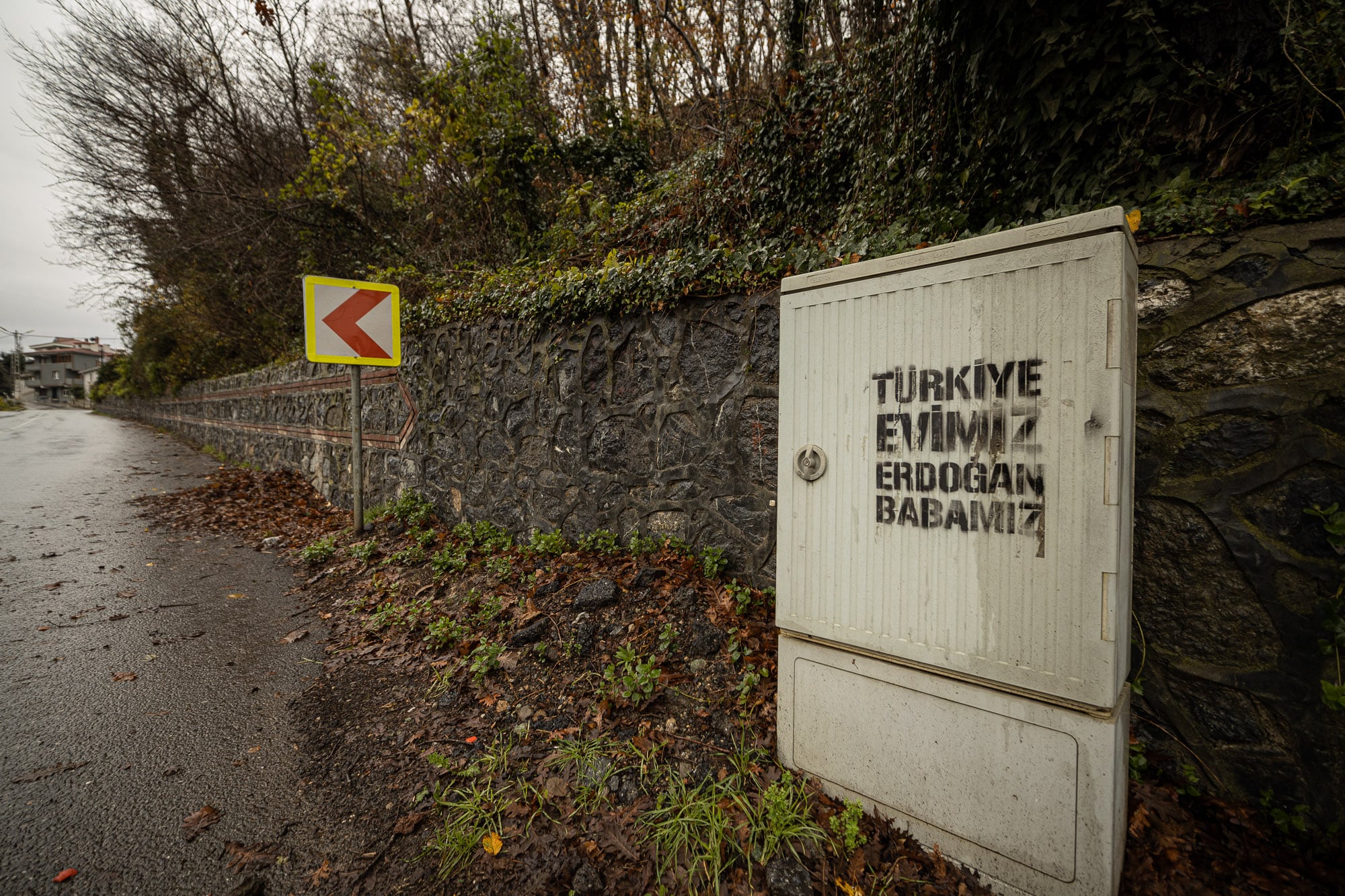 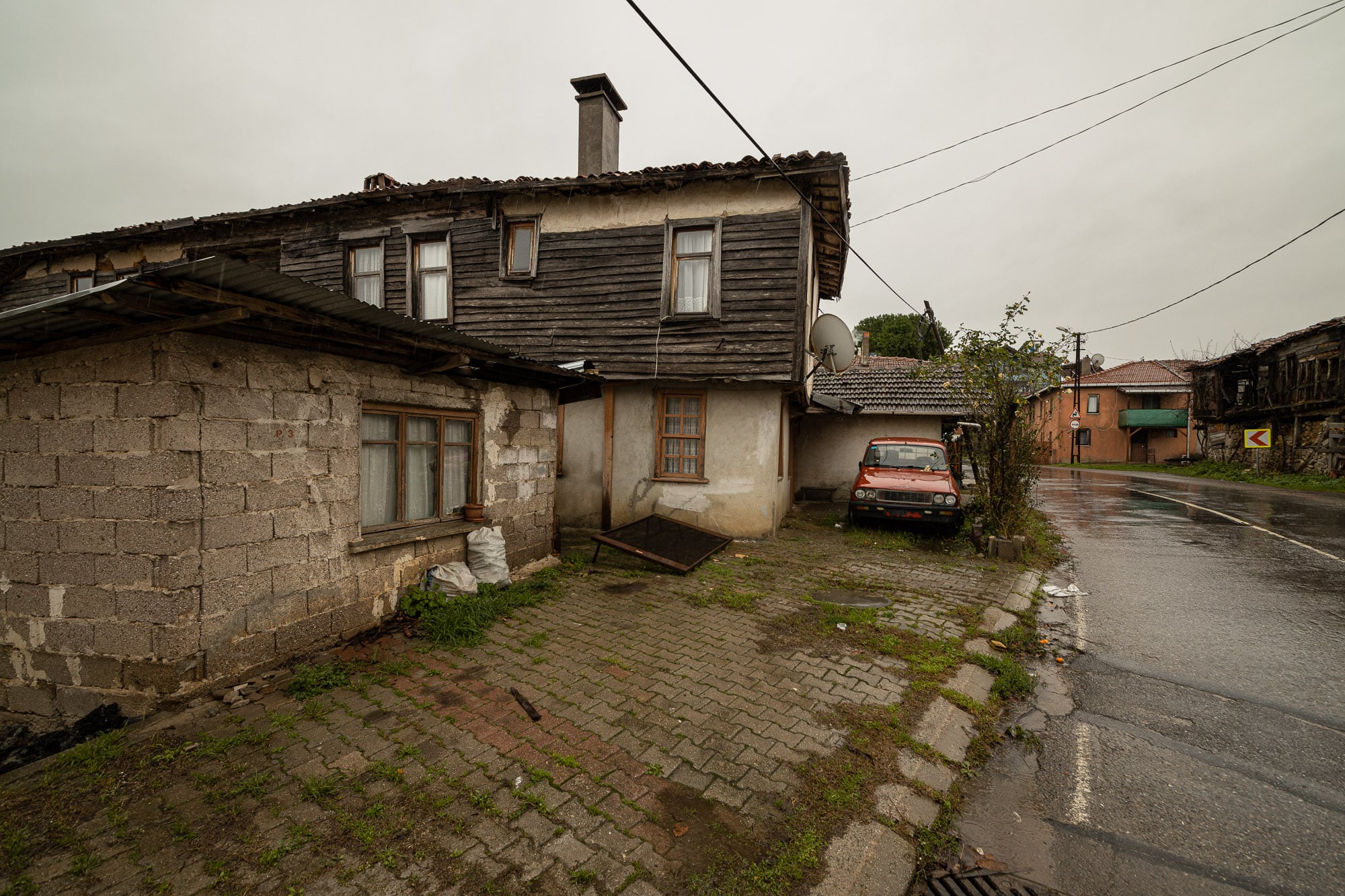 More of the road to walk from Agva to Inremli: 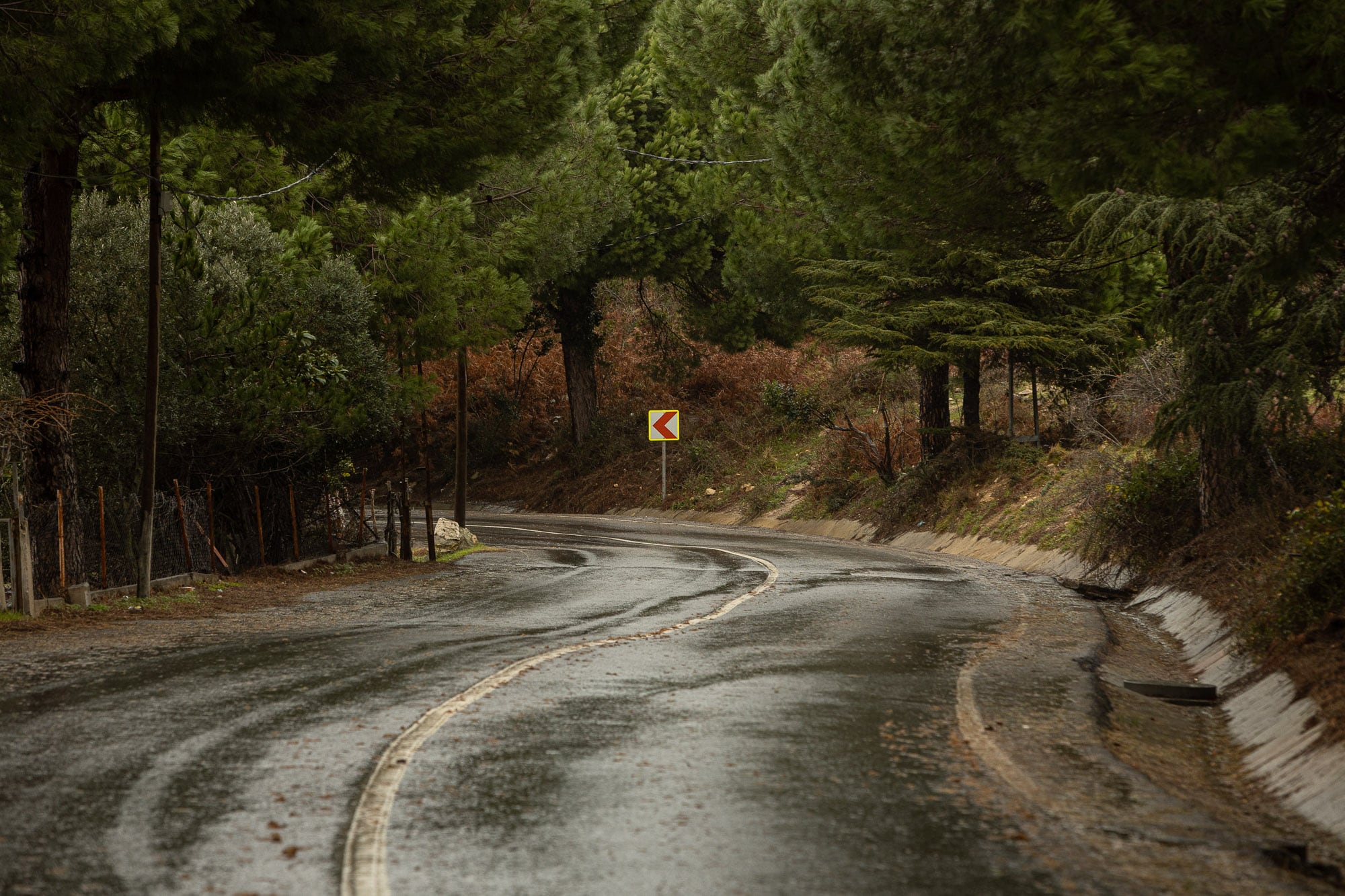 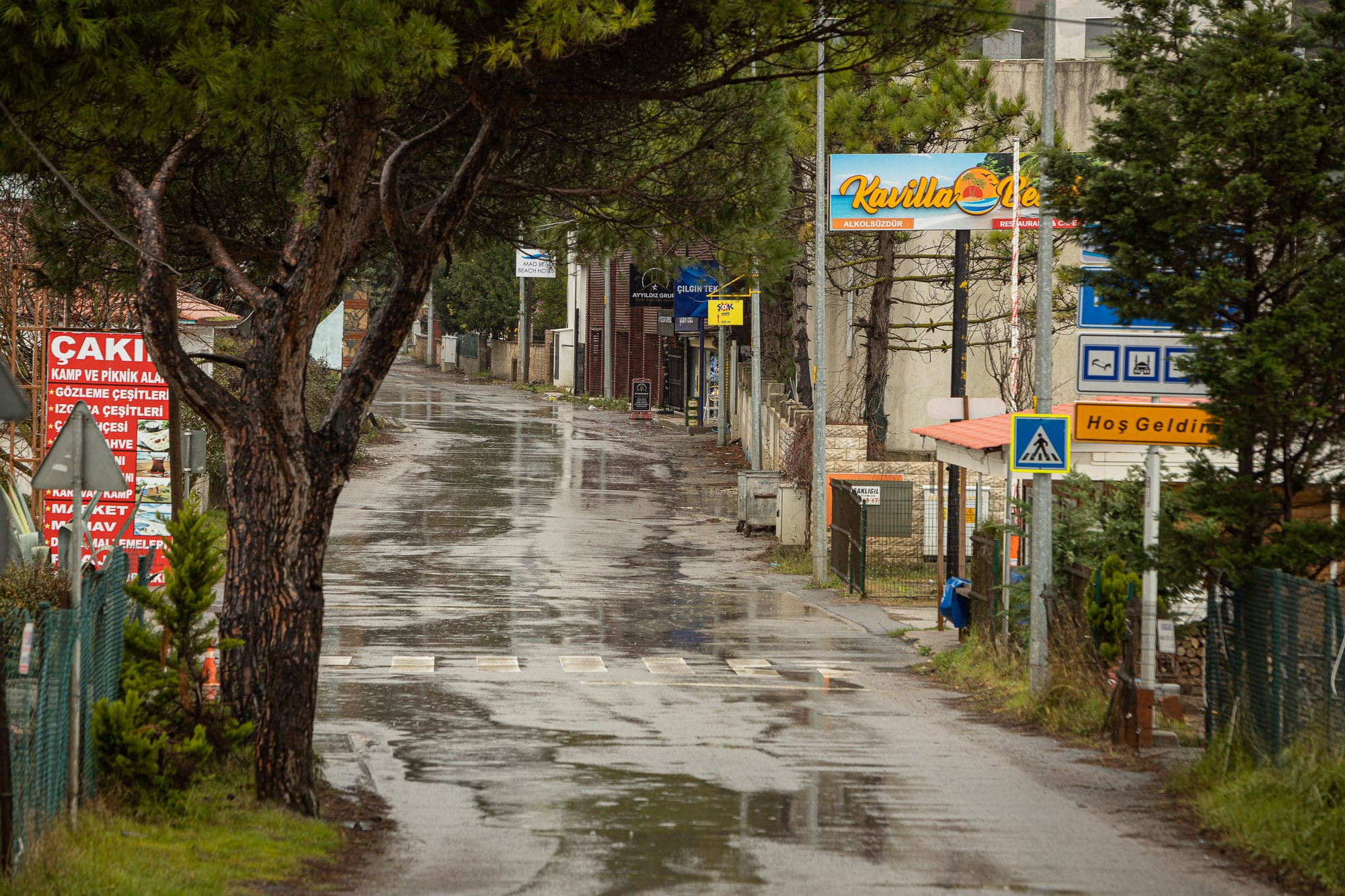 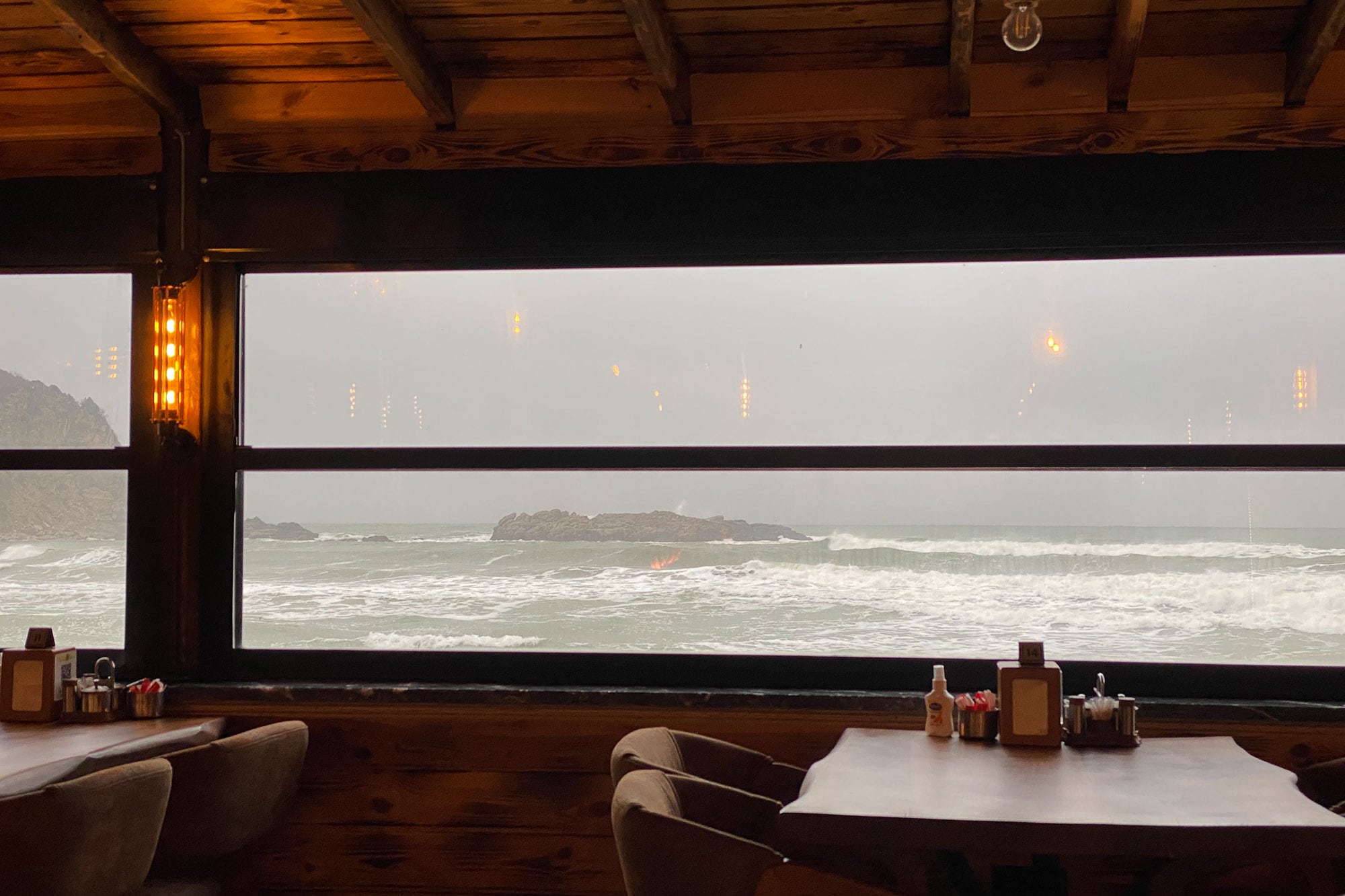 A friend, Yilmaz, Tekin, and Fatih: 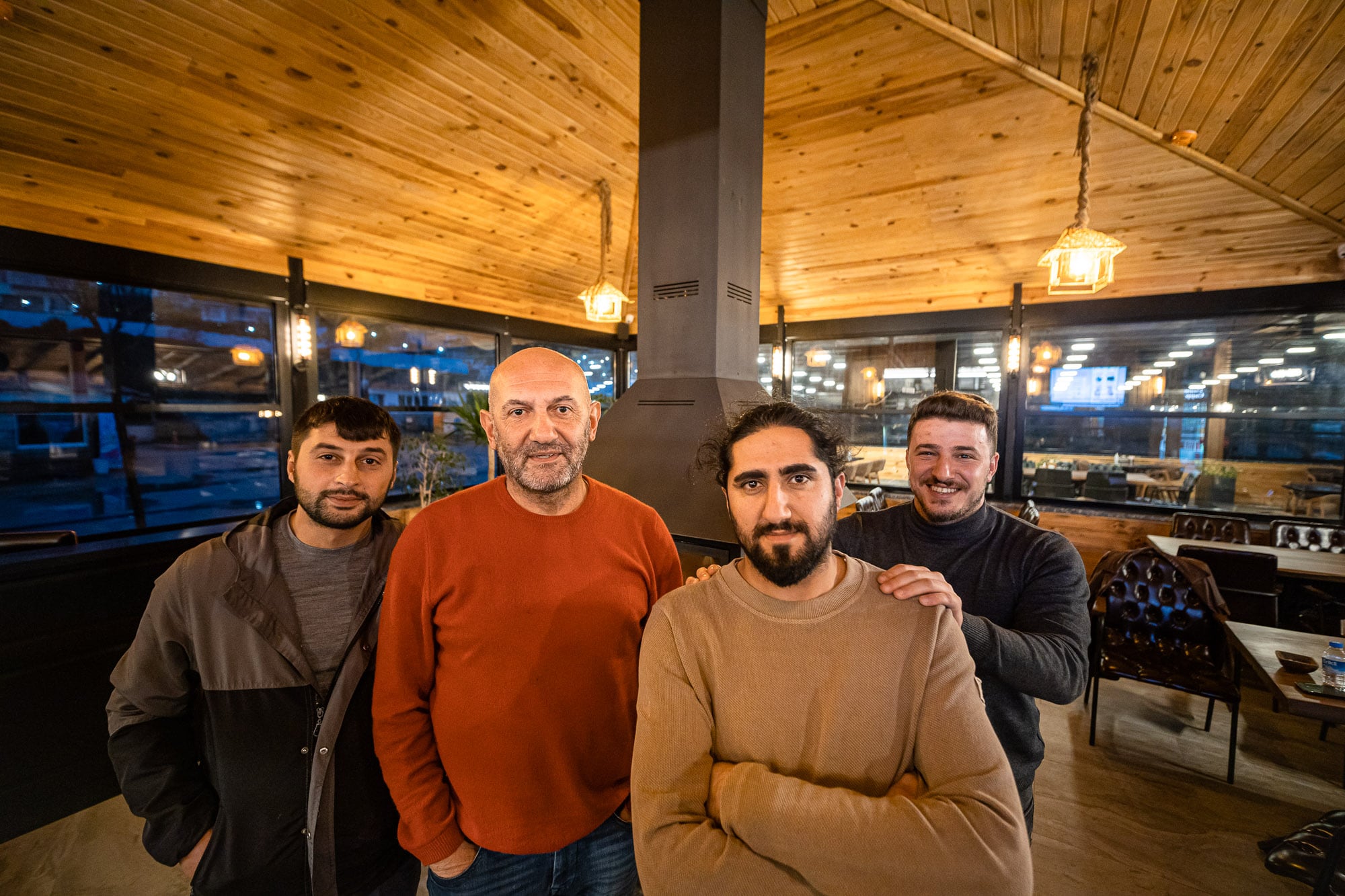 Day 494
from Agva to Imrenli