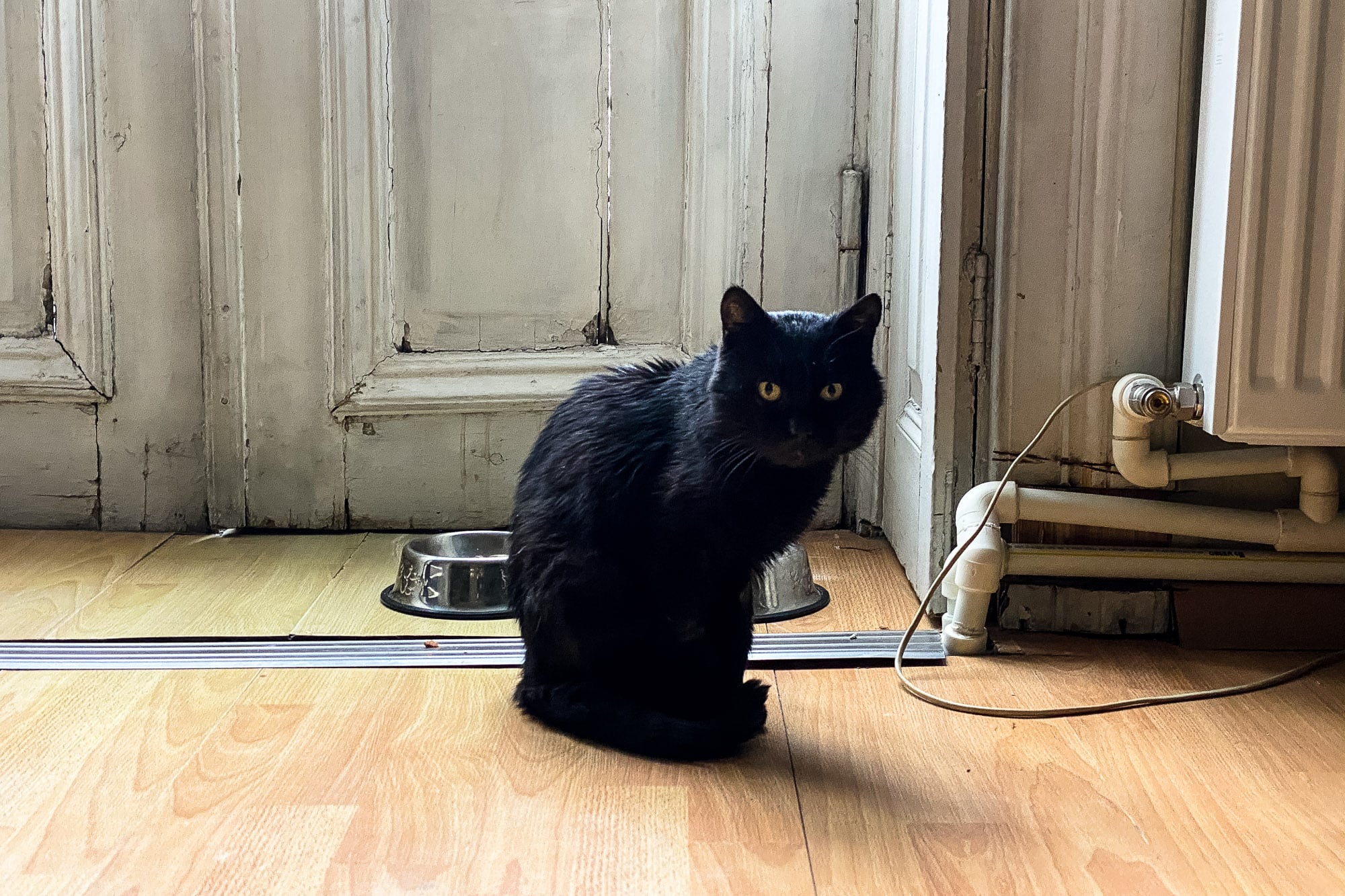 He is an old cat from the yard where I used to live. He is black and skinny with a massive head, and his eyes always look as if he’s angry.

He got this name in February. Being a yard cat means that nobody knows exactly how old he is, but word among the neighbors has it that he’s at least twelve years old, and that he is Gogo’s dad, making him Coco’s and Toto’s grandpa. So I would refer to him as grandpa when I went back to the yard to feed him and the other cats.

“Goooogoooo!” I would call, then “Graaaandpaaaa!”, and sometimes “Puuutin!” (Yes, one of the cats is called Putin, because she’s mean and greedy.)

And they would come, and I would pet Gogo and Grandpa a little (but not Putin) and give all of them some food and water.

In January I noticed that he was losing weight. He had never been a particularly strong cat, but now he was walking around on thin, shaky legs that reminded me of an Imperial Walker. 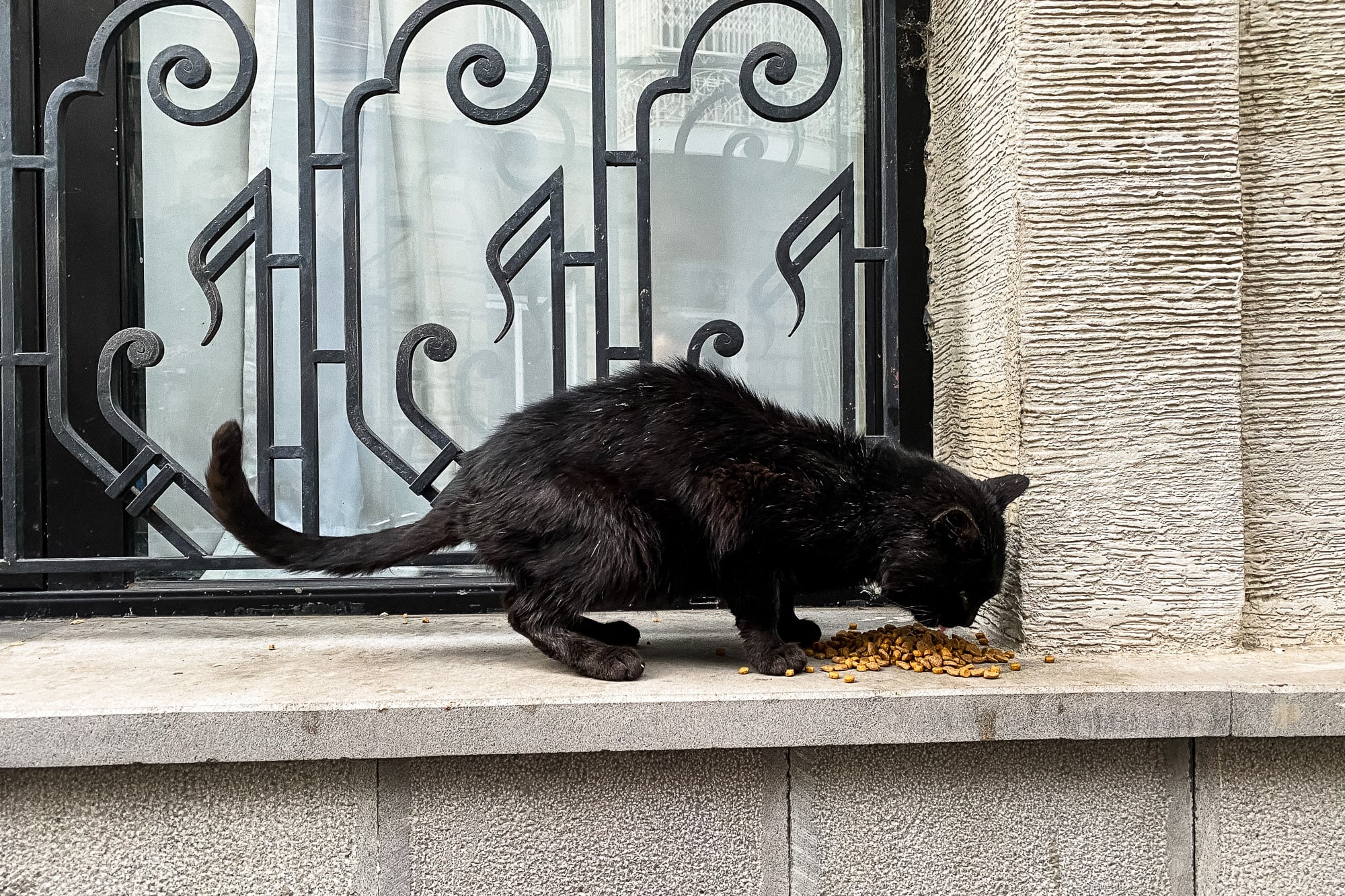 I responded by feeding him wet food, but his condition didn’t change. So at some point I got my carrying case and went to the yard. It took three tries to get him into the case. 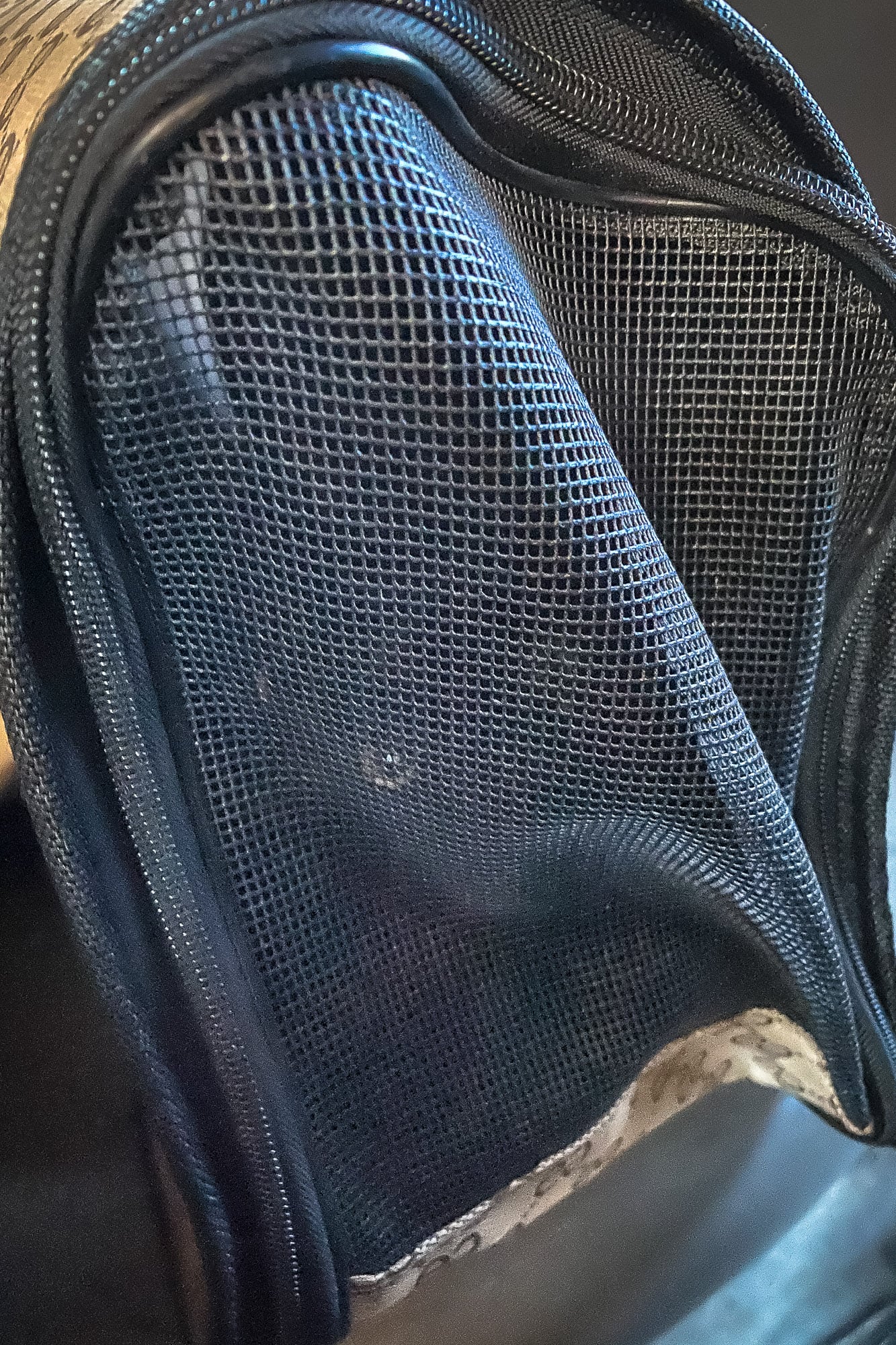 Babua got his name a half hour later when we arrived at the vet and the lady at the reception asked how to refer to him.

“What’s Georgian for grandpa?” I asked her.

The vet did a blood test. 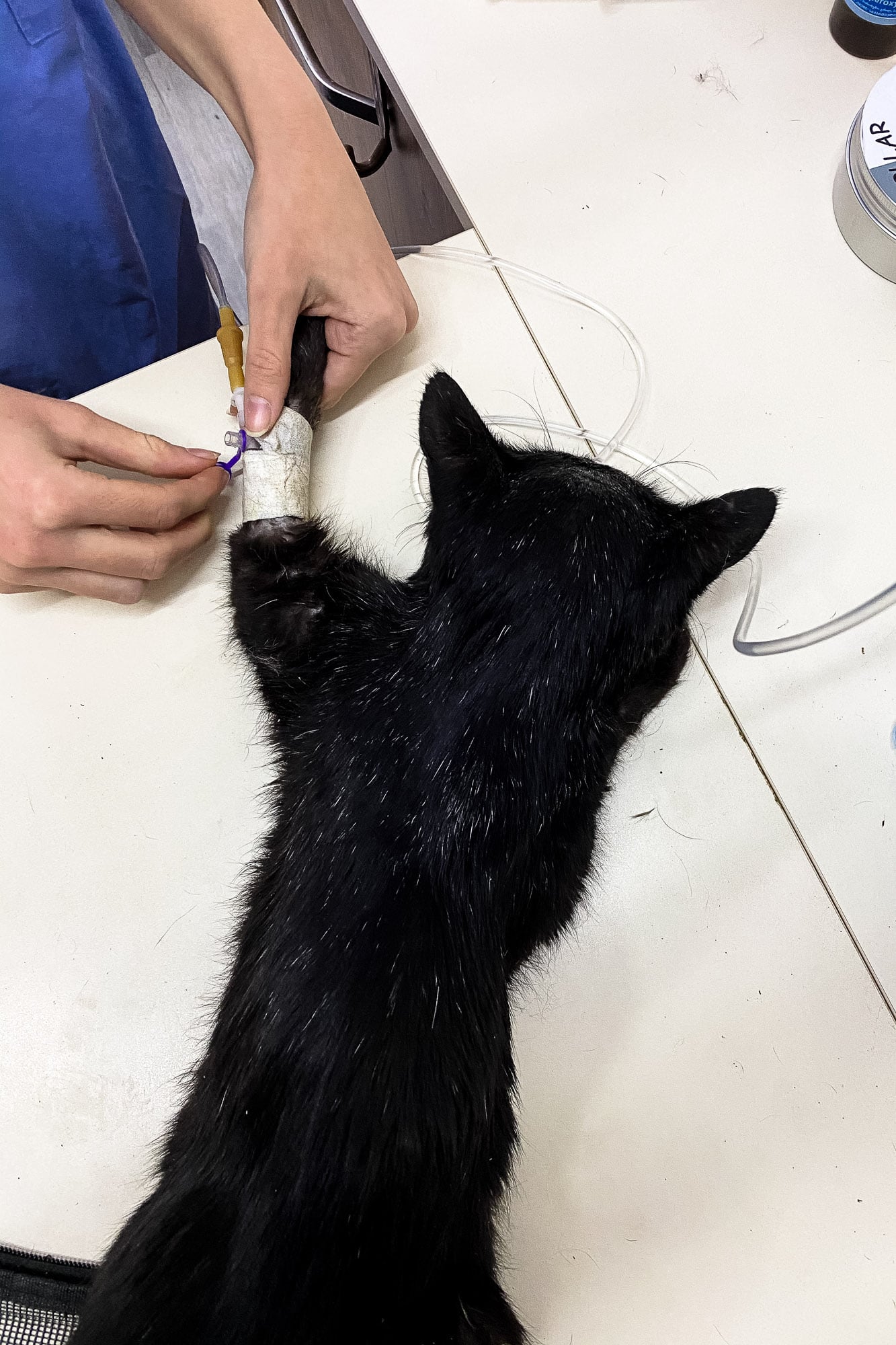 The procedure didn’t go so well. First they tried taking blood from Babua’s front leg, but that didn’t work. There simply wasn’t enough blood. They tried using a hind leg, and since that didn’t work very well, either, they had to tilt Babua over until a sufficient amount of his blood had trickled into the receptacle. He was just so weak.

When the test results came back, I was told that Babua’s liver and kidneys were damaged, and that he wasn’t going to live long, especially not in the yard. They administered some treatment, that was all they could do.

I didn’t want to put him back in the yard. Frost was coming, and so was the possibility of hunger, thirst, and mean animals. I couldn’t put him together with my three young cats, either, so I tried finding a person to adopt him. It turned out that nobody wanted an old, sick cat.

In the end I asked my neighbors if he could stay in our hallway. It’s a large, old house, and there are lots of spaces to hide and play. My neighbors said yes.

And so Babua moved in. 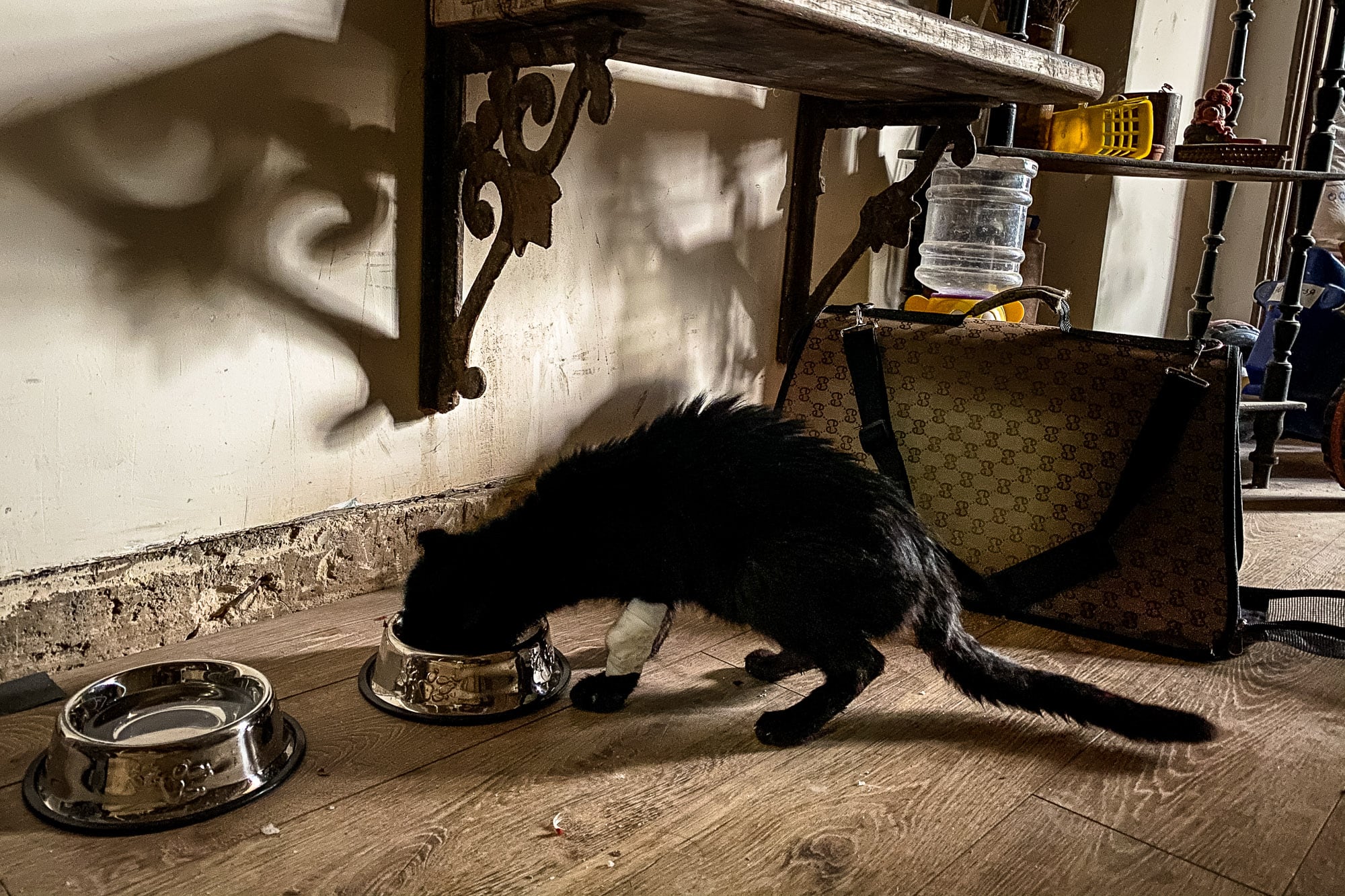 I got him a little cat house and a litter box, and to my surprise he didn’t seem to like the house, but he used the litter box as if he had never peed anywhere else. And so there he was, in the hallway, just sitting there, moving with the sun. 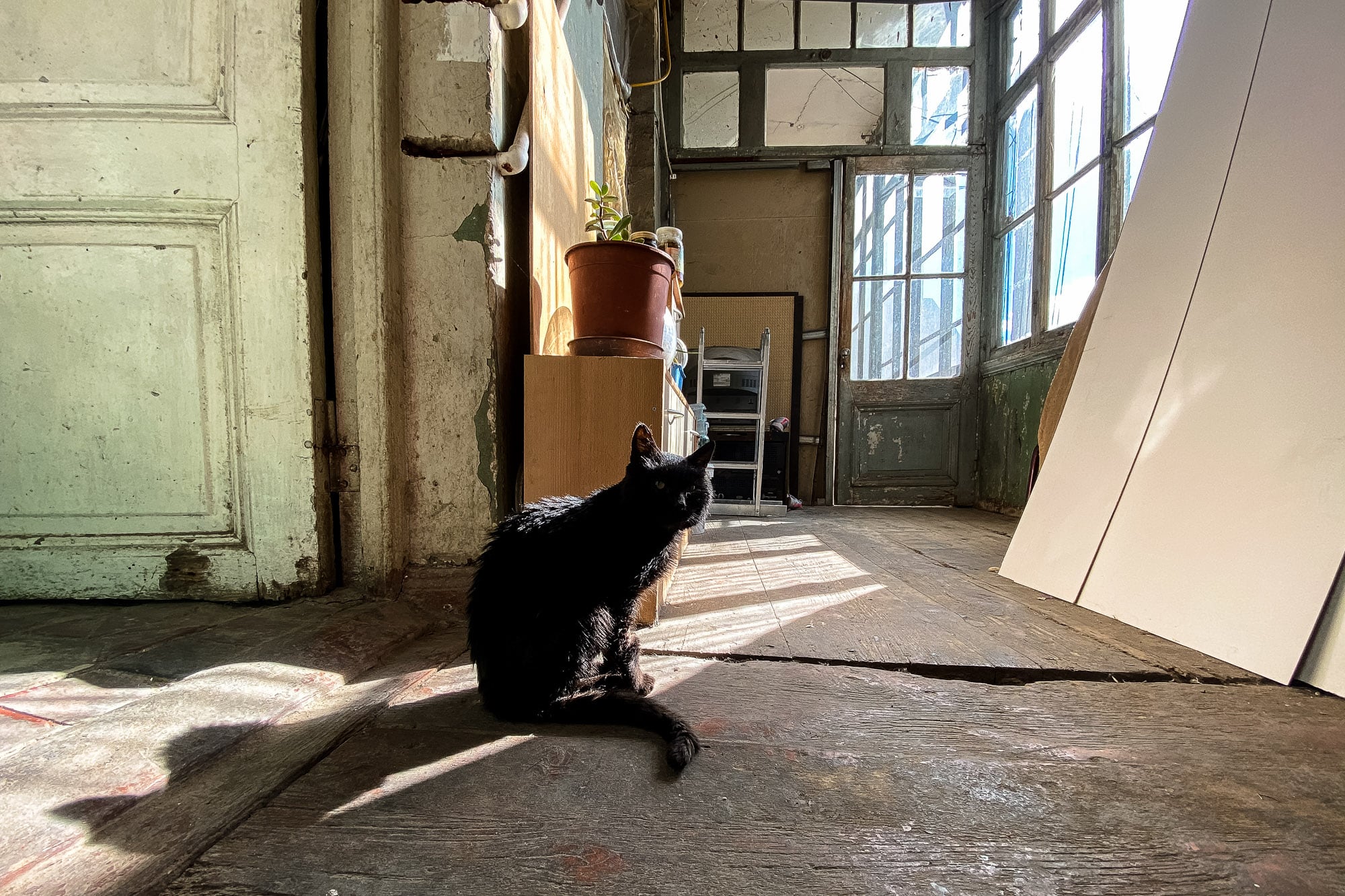 When I noticed that he had again stopped eating, I took him to another vet. They did some treatment (mostly iv-drips), and at some point, when he was stronger and started eating again, they did another blood test. 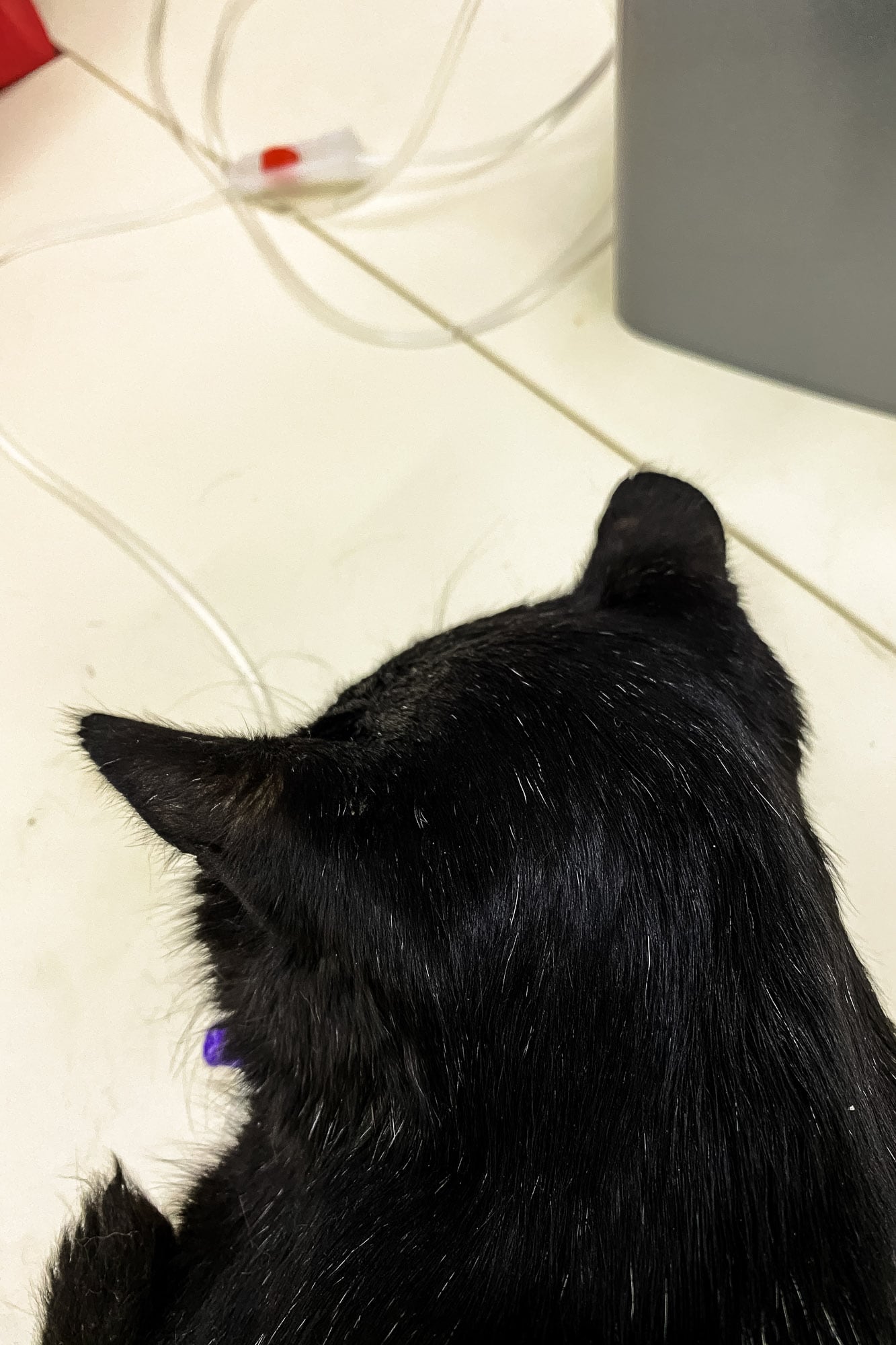 Yesterday I got the result. They gently recommended that I put Babua to sleep.

When darkness fell and the house had gone quiet, I went out into the hallway to look for him. It was dark, but there he was, a shadow on top of an old piano under the stairs. His eyes opened as I approached, and then, when I started petting him, they closed again. “Heeeey Baaaabuuuuaaaa,” I whispered to him, and for some reason this was too much for me.

When Babua noticed that I was crying, he came closer and closer until his face was directly in front of mine. He was purring. I couldn’t hear it, but I could feel it under my hands. 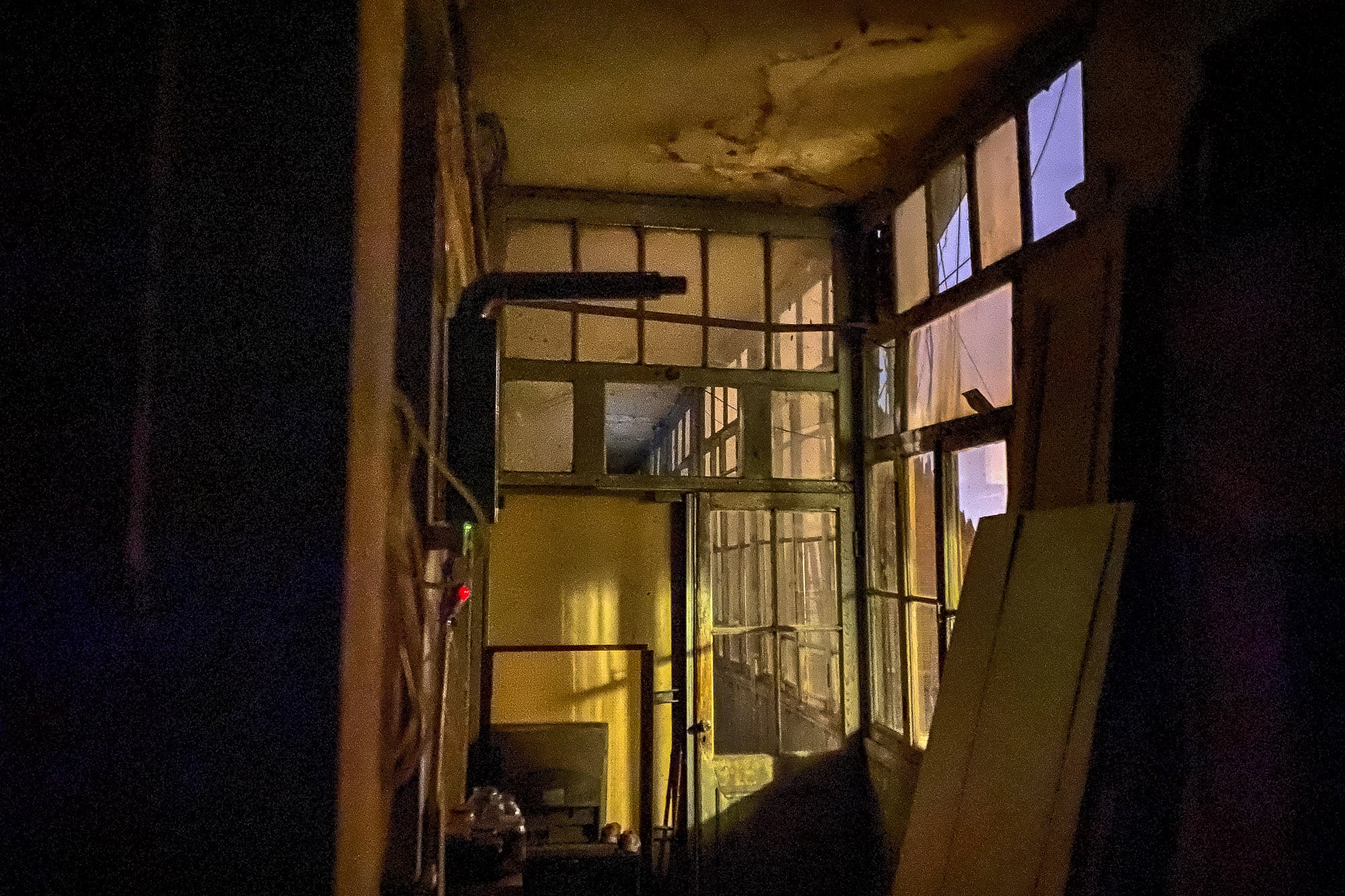 The next day I asked the vet when we should come and do it. They recommended to give him some good food and some cuddles, and wait until he stopped eating for good.

When I explained the situation to my neighbors, we decided to try boiling some fish and some chicken for him. It turned out Babua really liked fish and chicken. He ate and he ate and he ate, and at some point I couldn’t feel the ridge of his spine anymore when I was petting him.

Babua stayed in the hallway until the temperatures dropped. Then I took him into my apartment and closed off one room for him so he wouldn’t be exposed to the rest of the gang. 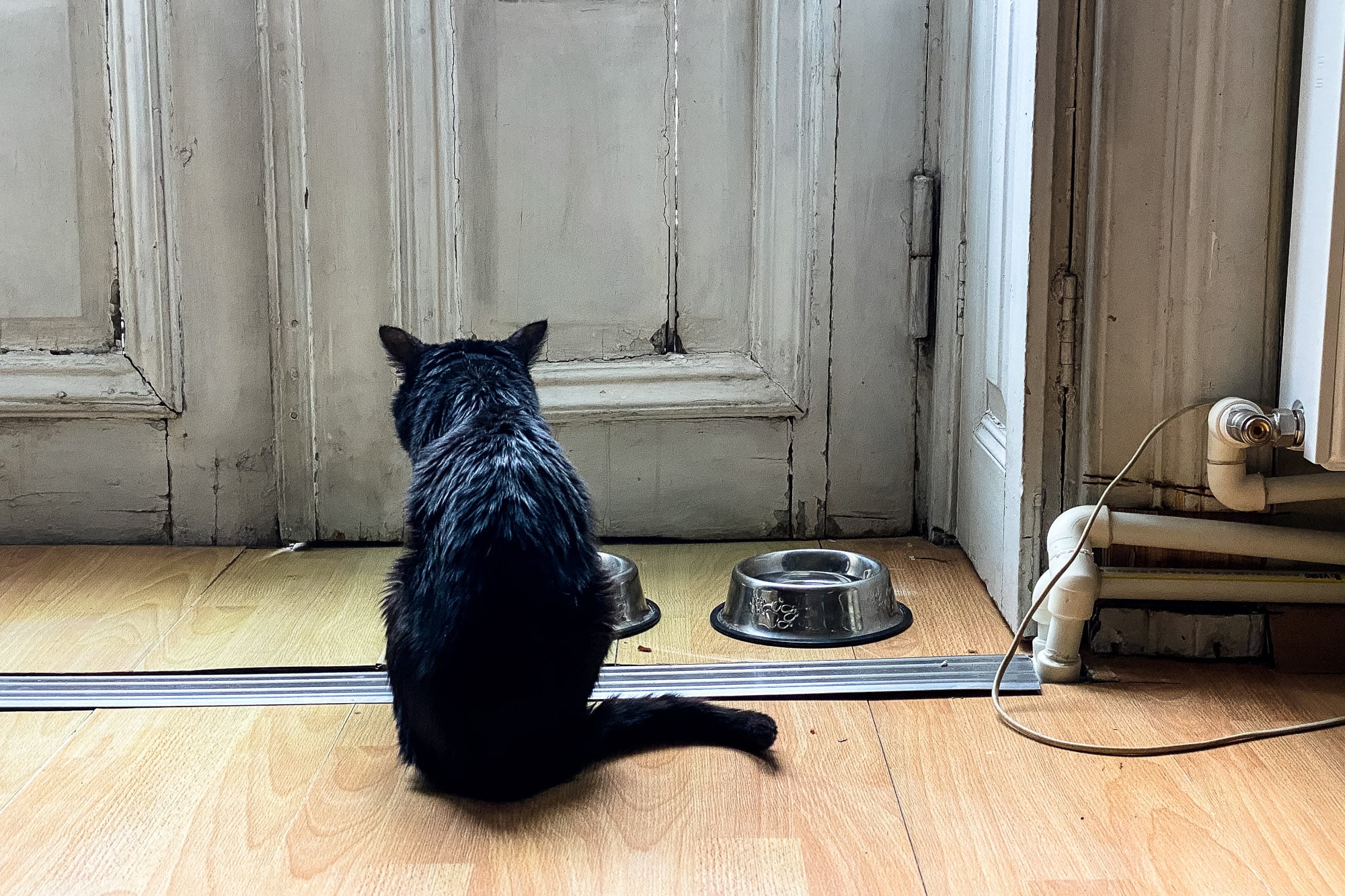 The gang was very cool about it. Coco, Toto, and Gogra were all sensing that something strange was going on, and sometimes, when I let them into Babua’s room, they would walk around in it and carefully sniff here and there. But they never gave me any shit about having that old black cat move in. I think it was fine for them because everything in their lives had always been fine, and as long as that didn’t change they were simply too lazy to bother.

Babua stayed in that room for a while, eating his fish and his chicken, sleeping in all kinds of places. 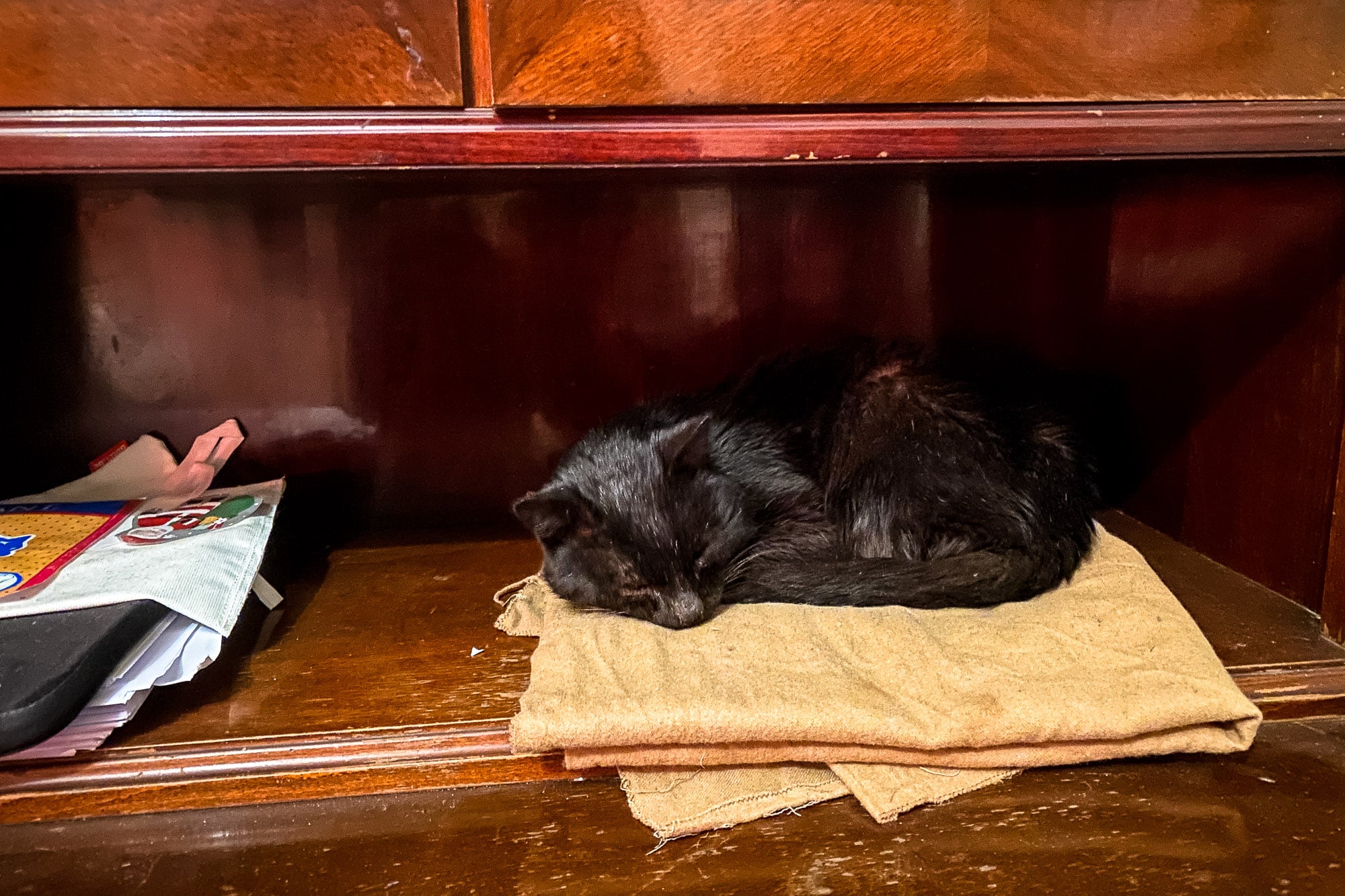 And it turned out that he was a very cuddly cat. 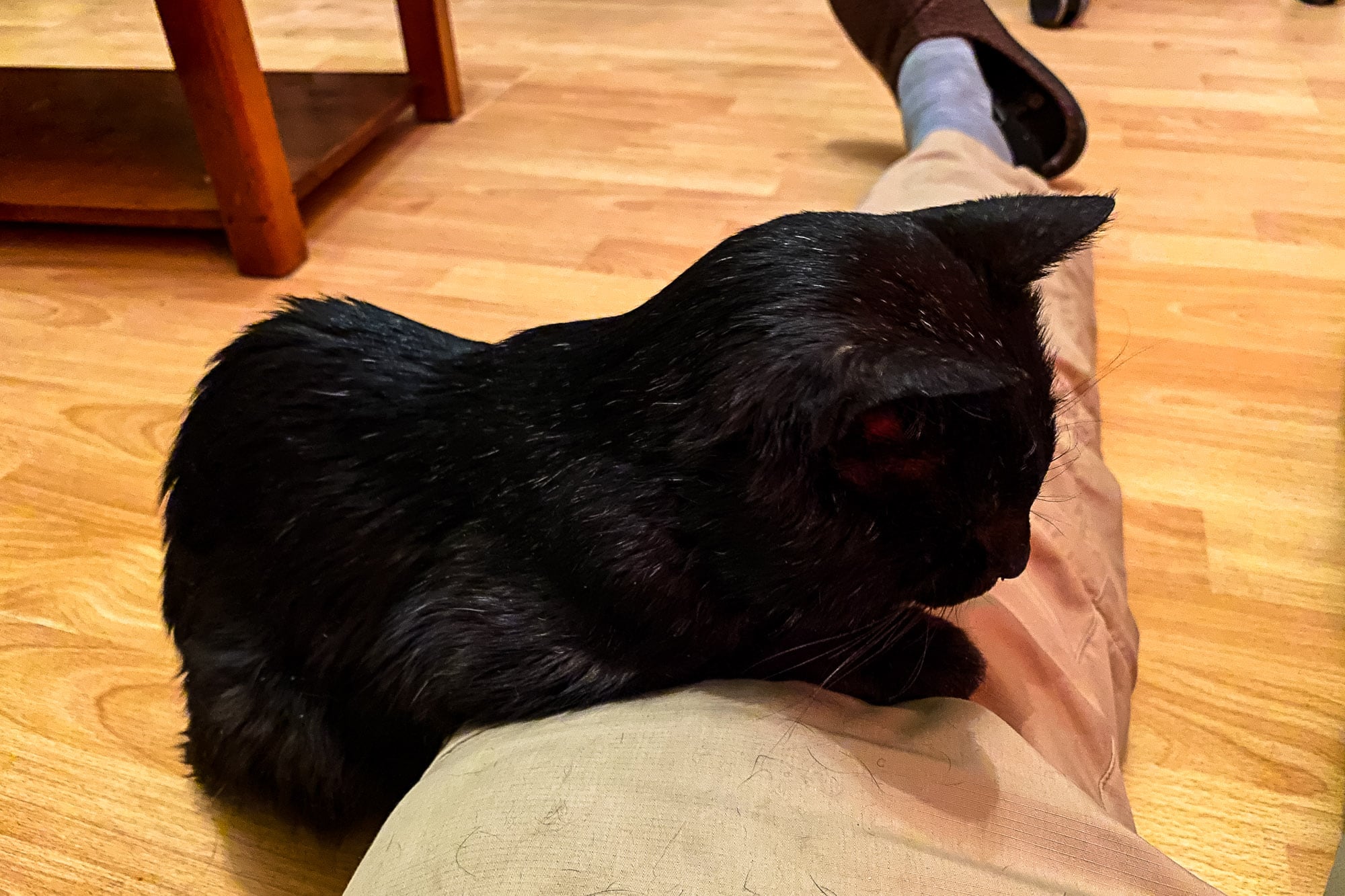 He would yell at me until I picked him up, or he would come into my lap by himself and just stay there. 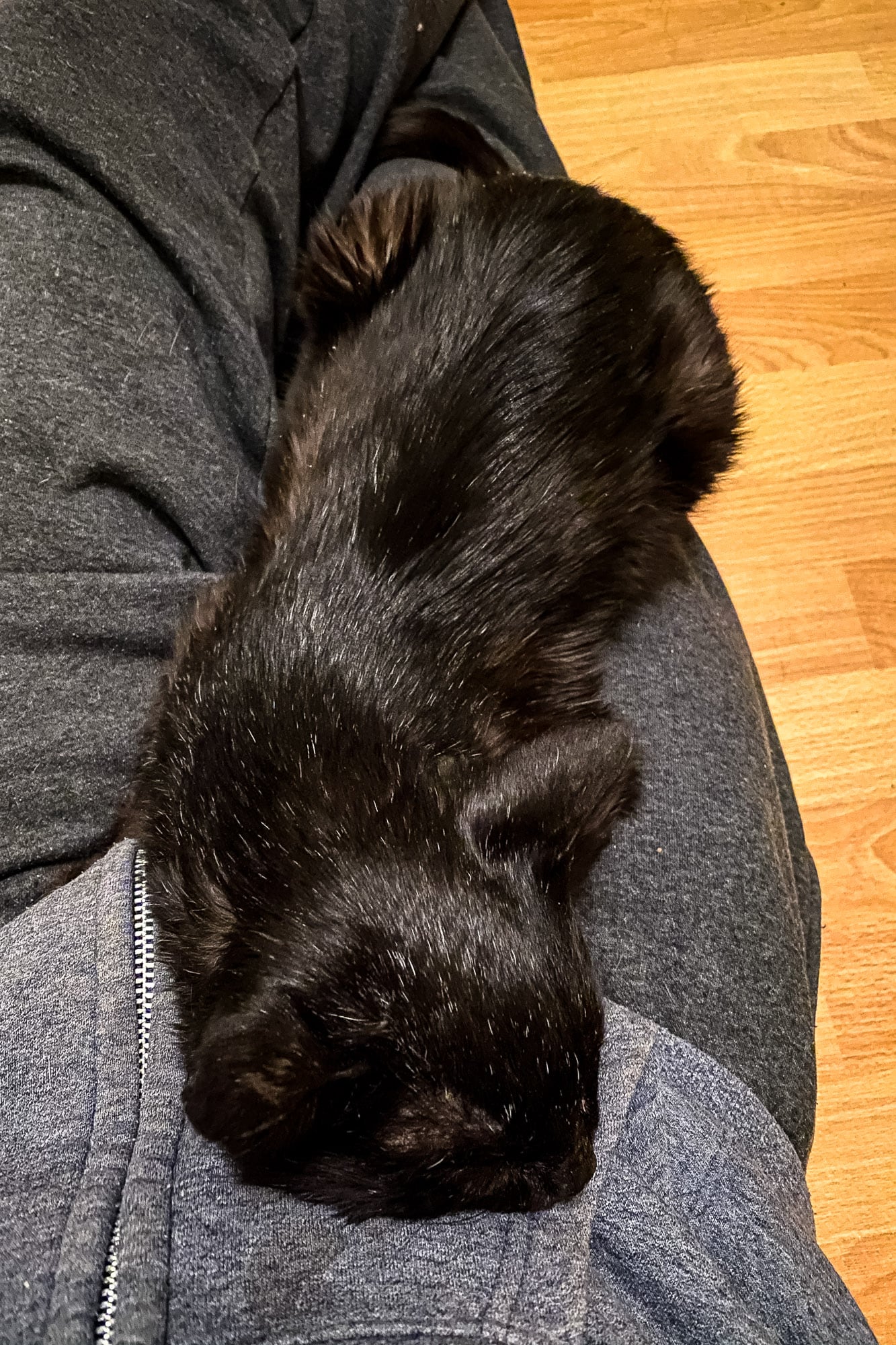 When the temperatures started rising again, Babua moved back to the hallway. The neighbors were very happy about it, especially the kids. 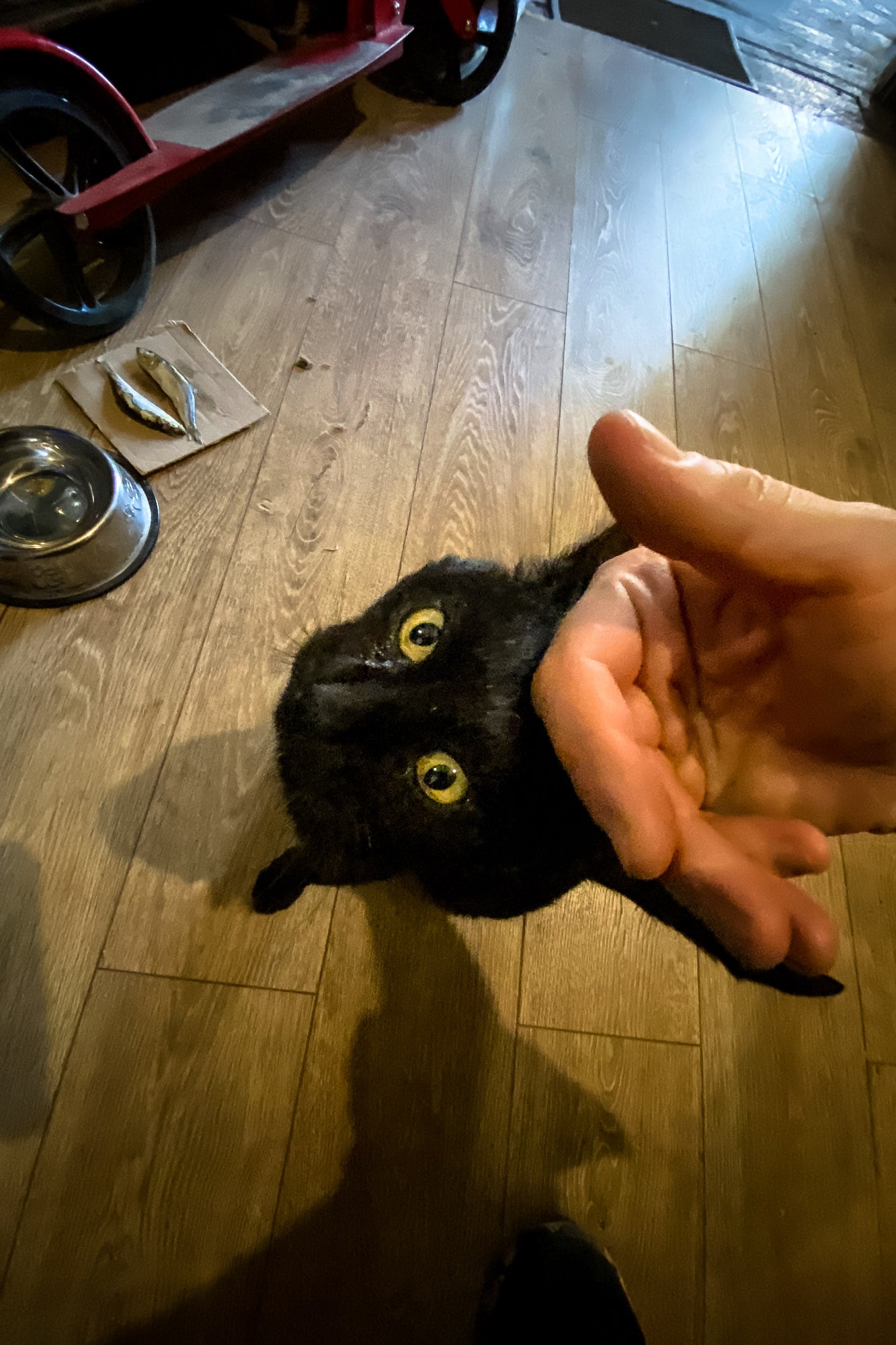 Today is the first of May. When I started writing this post back in February, I wanted to call it “Babua Came To Die”, but today he is still out there in the hallway, eating, drinking, demanding to cuddle.

He has found a way to access the attic, and sometimes, when I don’t see him for a while, I know he’s up there, walking around on his Imperial Walker legs, sleeping in all kinds of places.

I put a little collar on him. 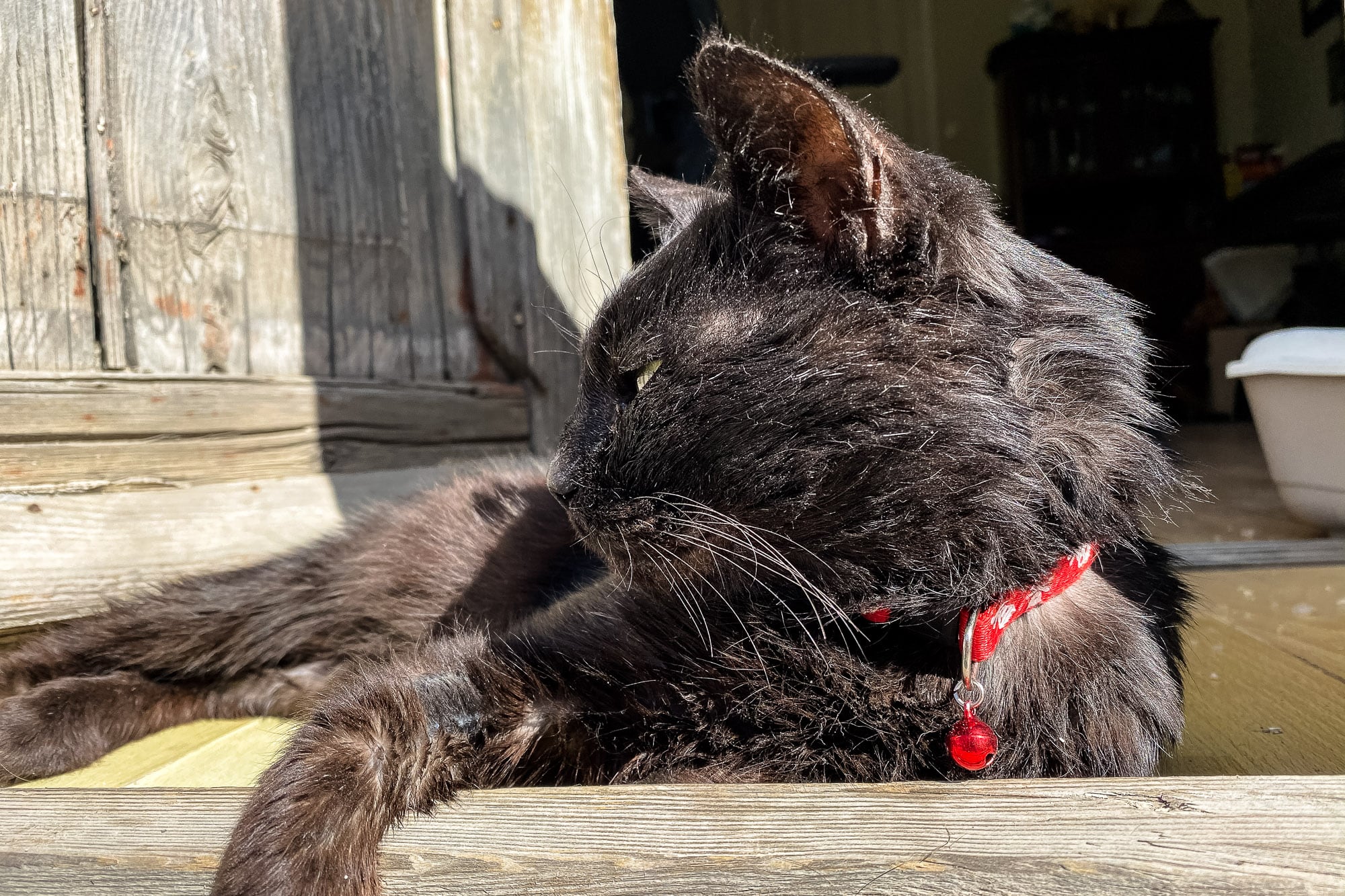 Of course, being a cat, he somehow managed to lose it right away.

And so Babua came to live.