When I went to the city today, I had a plan. I was going to see a neurologist first (to check what was up with my leg). Then I was going to go to a yoga class called “spine focus”, which I understood to be of grave importance to me.

The sky was blue, so I walked around for a bit: 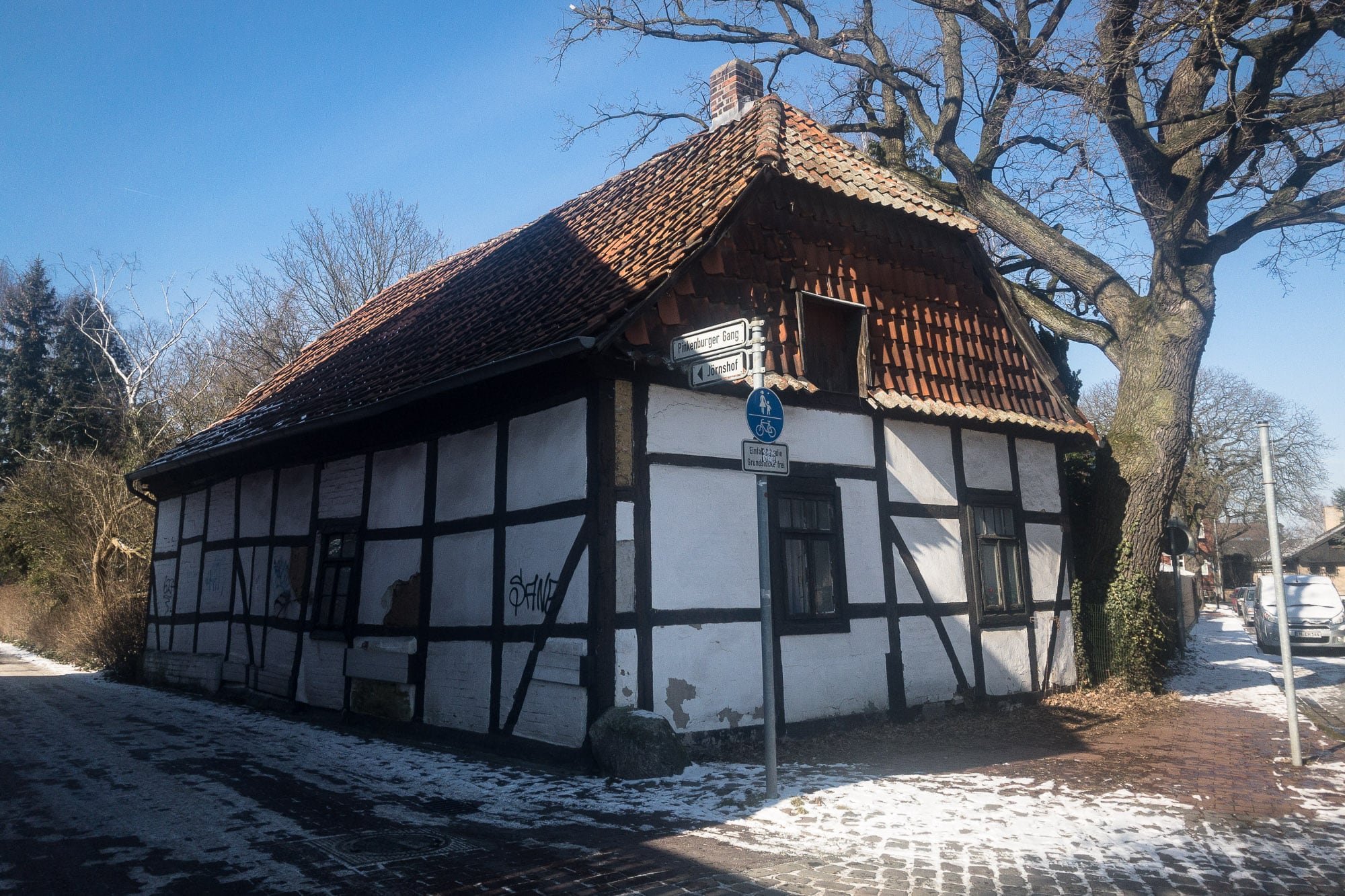 When I got to the neurologist, they did all kinds of tests involving needles and electroshocks: 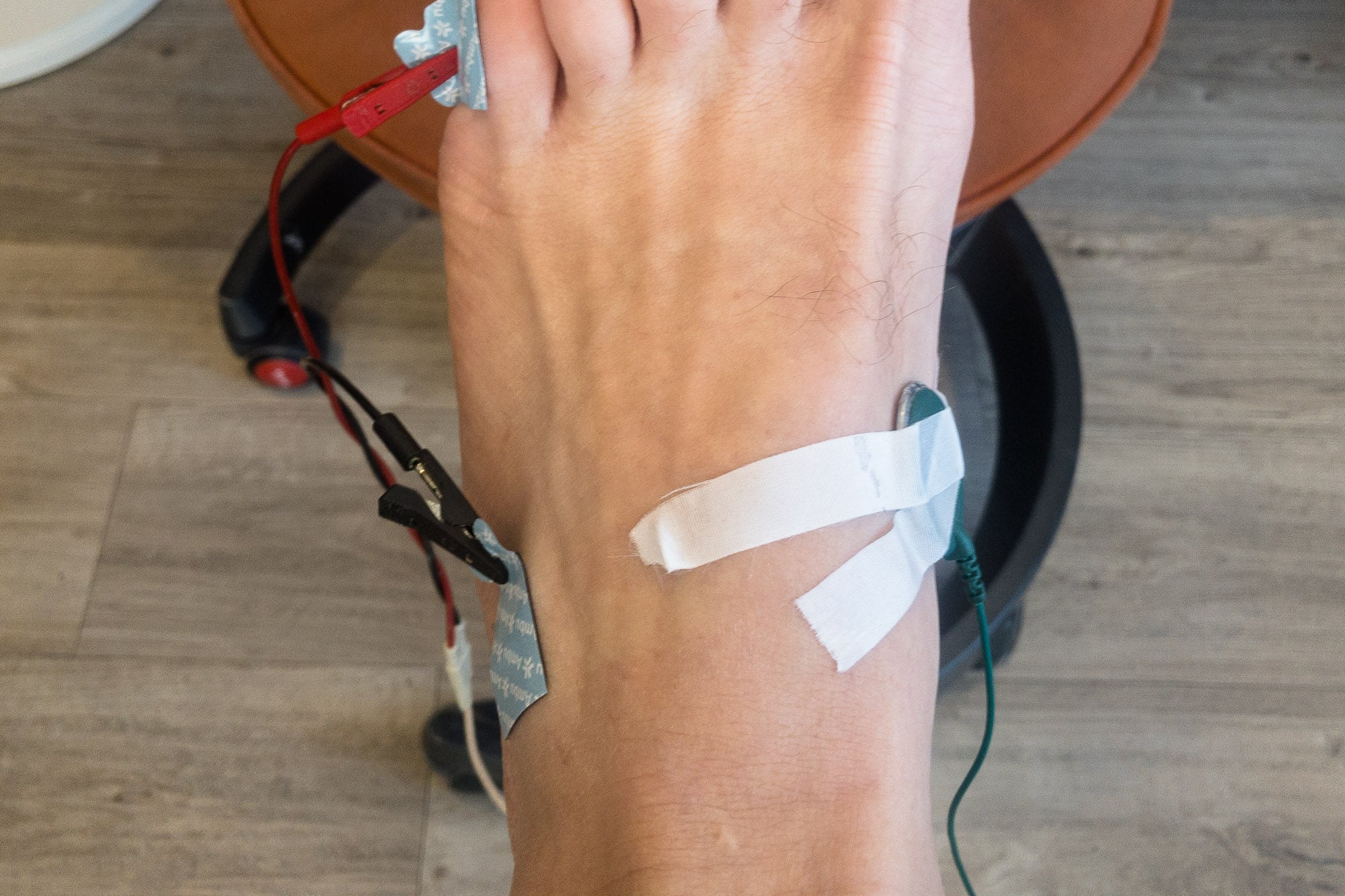 It seemed to take forever. At one point I asked them when they thought we would be done, and they said “maybe in an hour”. I told them about my yoga class. “Sure,” they said, “you can go there now and come back for more needling on Monday.”

So I left. Hopped on a bus. Checked how long it would take to get to the yoga place. Figured I wouldn’t make it with public transport. Asked the bus driver if there was a taxi stand close by. She offered to call a cab for me, so I got off at an intersection and waited there. Five minutes. Ten minutes. Fifteen minutes. The taxi never showed up.

When I saw a cab driver pull up to the light with a cigarette in his mouth I ran over to him and asked if he was willing to take me along. He nodded, adding that we would have to be quick, because he had an appointment to get to. That was fine with me, so we dashed through the city.

“Are you on your way to a job interview?” he asked me.

No, I said. But since I couldn’t get myself to admit that I was taking a taxi just to get to a yoga class, I told him that I was on my way to a doctor’s appointment.

“Funny doctor where you can’t be a late a few minutes”, he said.

I ended up paying twenty euros for the ride, but I triumphantly made it to the yoga studio five minutes before the start of the class. They would lock the doors after that, which was why you couldn’t be late. Spine focus? I asked the receptionist. “Spine focus!” she said with a smile.

I rushed to the dressing room, got out my yoga mat, my towel, and my extra shirt for later.

Something was off, though.

I cursed the universe.

I had forgotten to bring my sweatpants.

I left the yoga studio and went straight to a restaurant across the street to get some duck and rice: 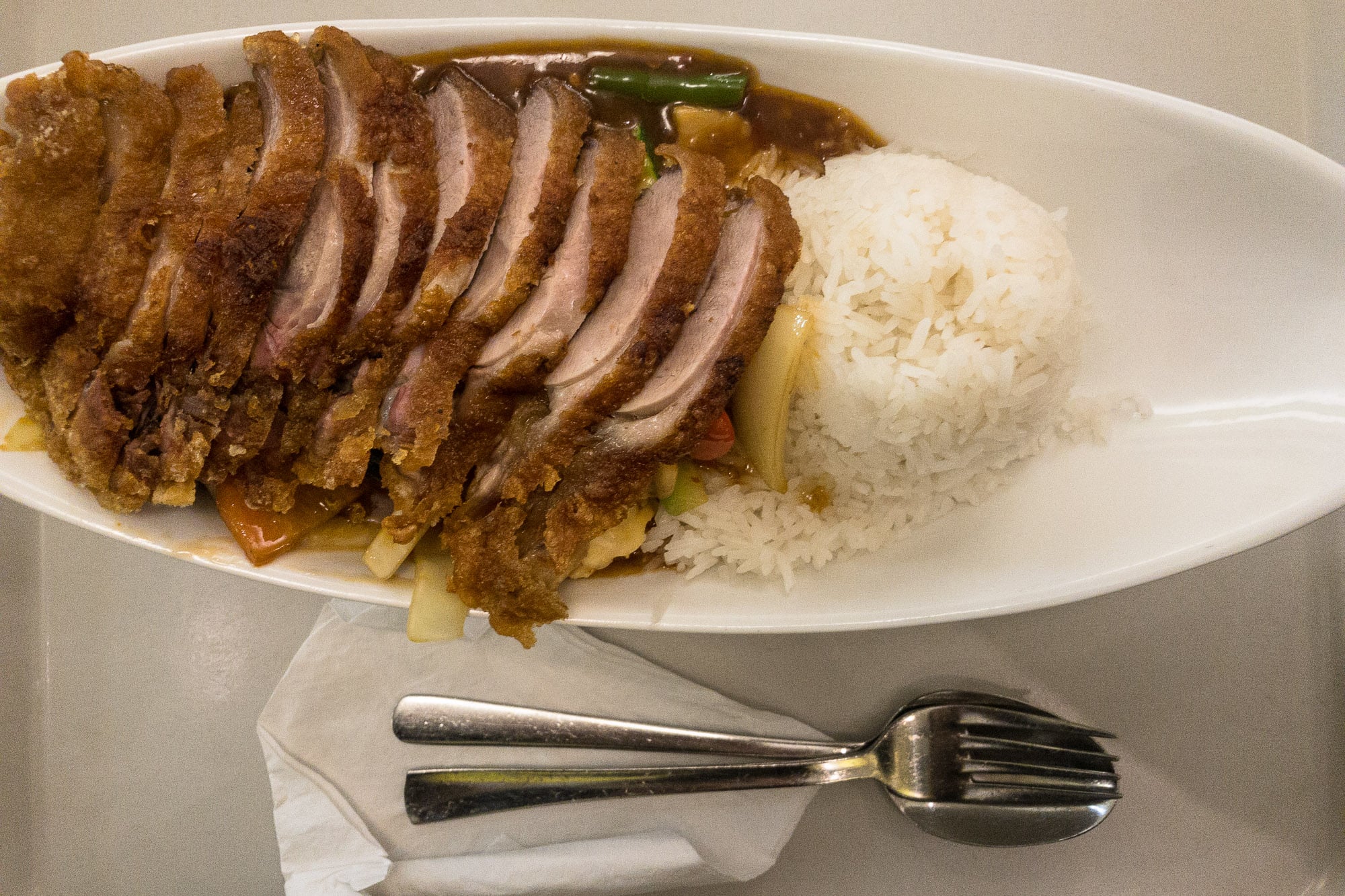 I was still reading Paul Theroux’ recount of his train journeys through China in the late 1980s. It was entertaining and informative at times, while at other times it seemed forced and construed: 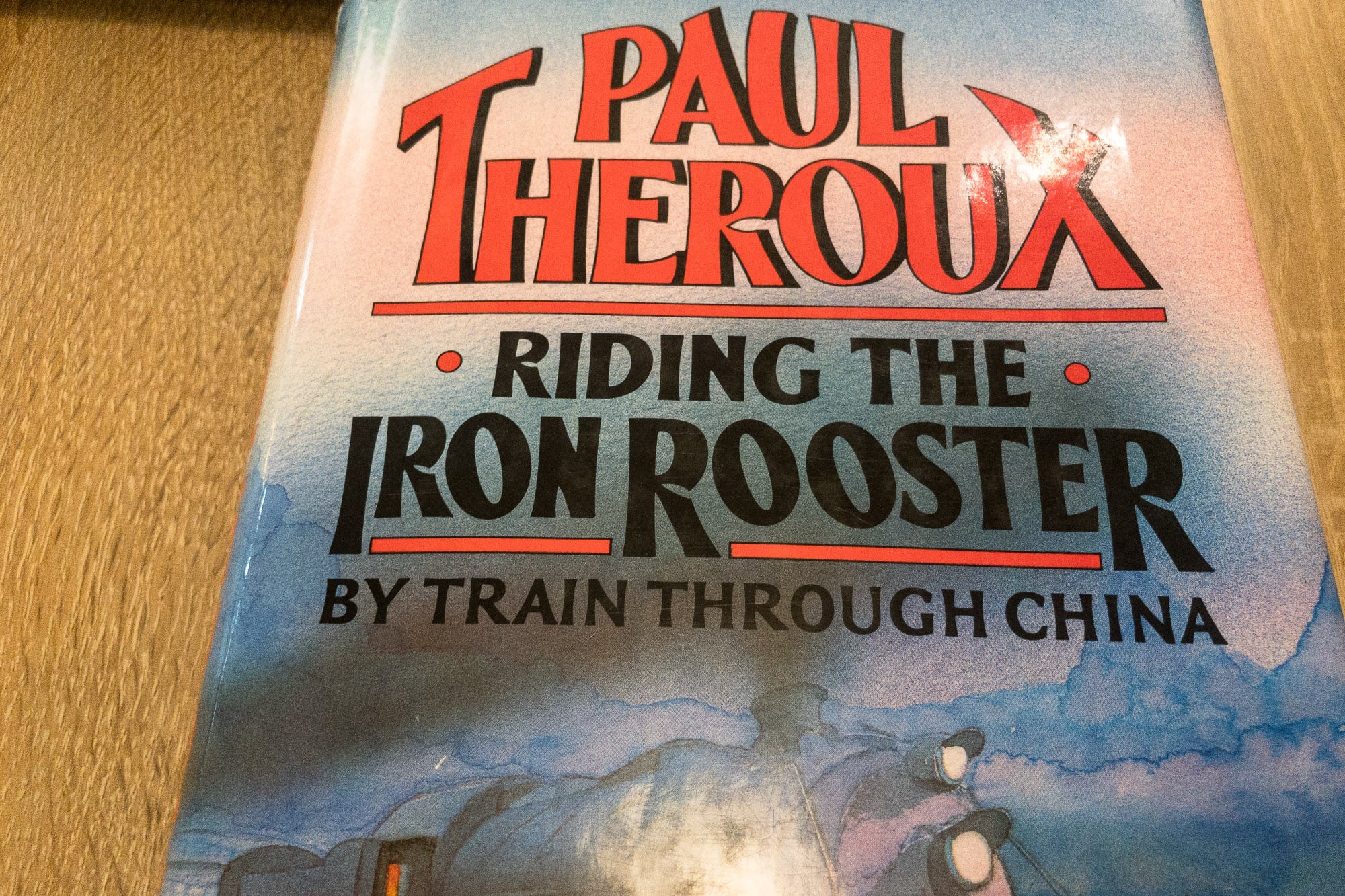 I had bought the book second-hand, and when I got to a certain page, there was an unexpected cut-out of a young Mel Gibson staring back at me: 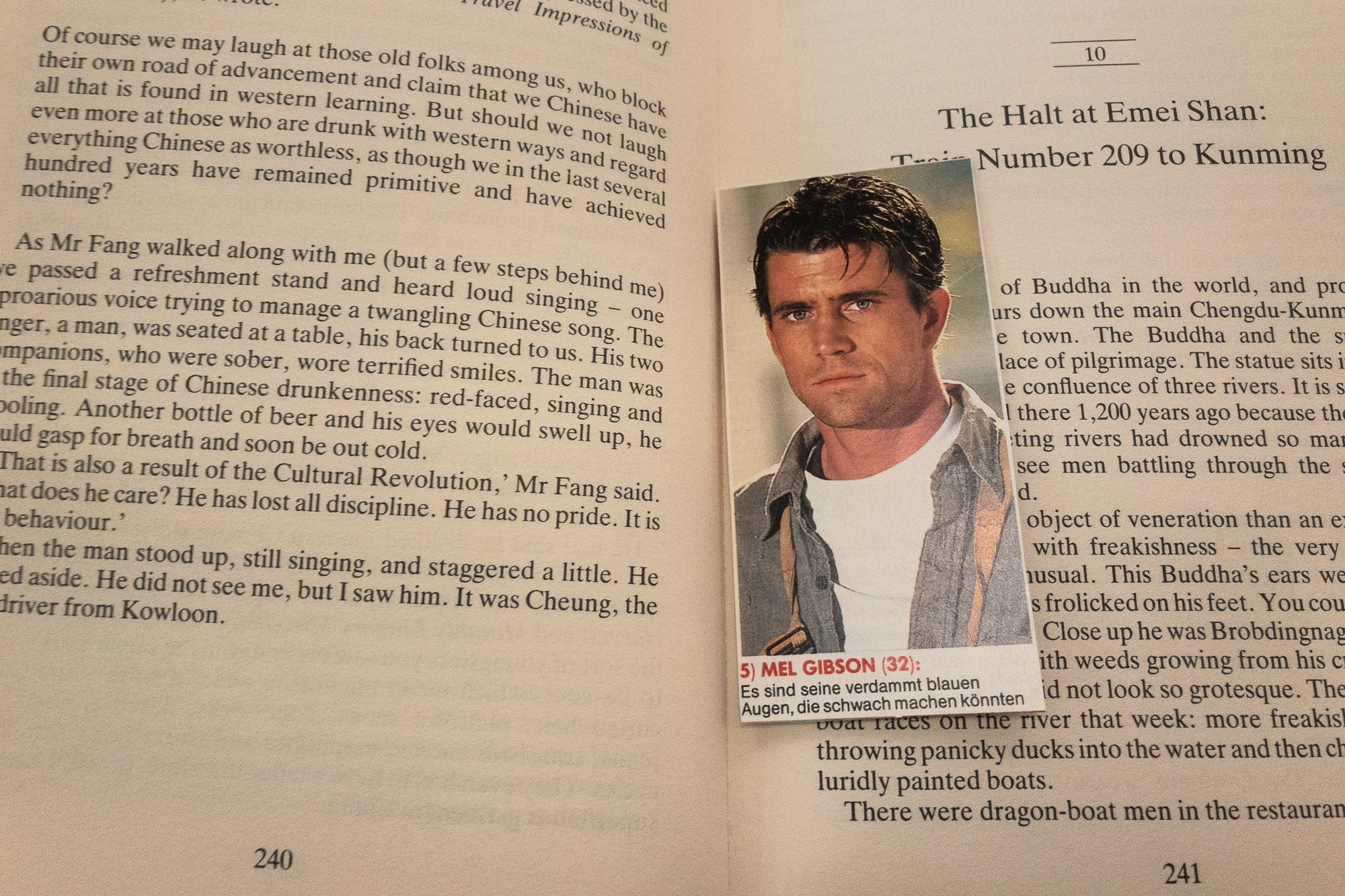 “You pants-forgetting fool!” he seemed to say.

And he looked very angry.