Kokand, an old Khanate like Samarkand or Bukhara, had a very nice, relaxed feel to it.

We got up early and checked out the Palace of Khudayar Khan: 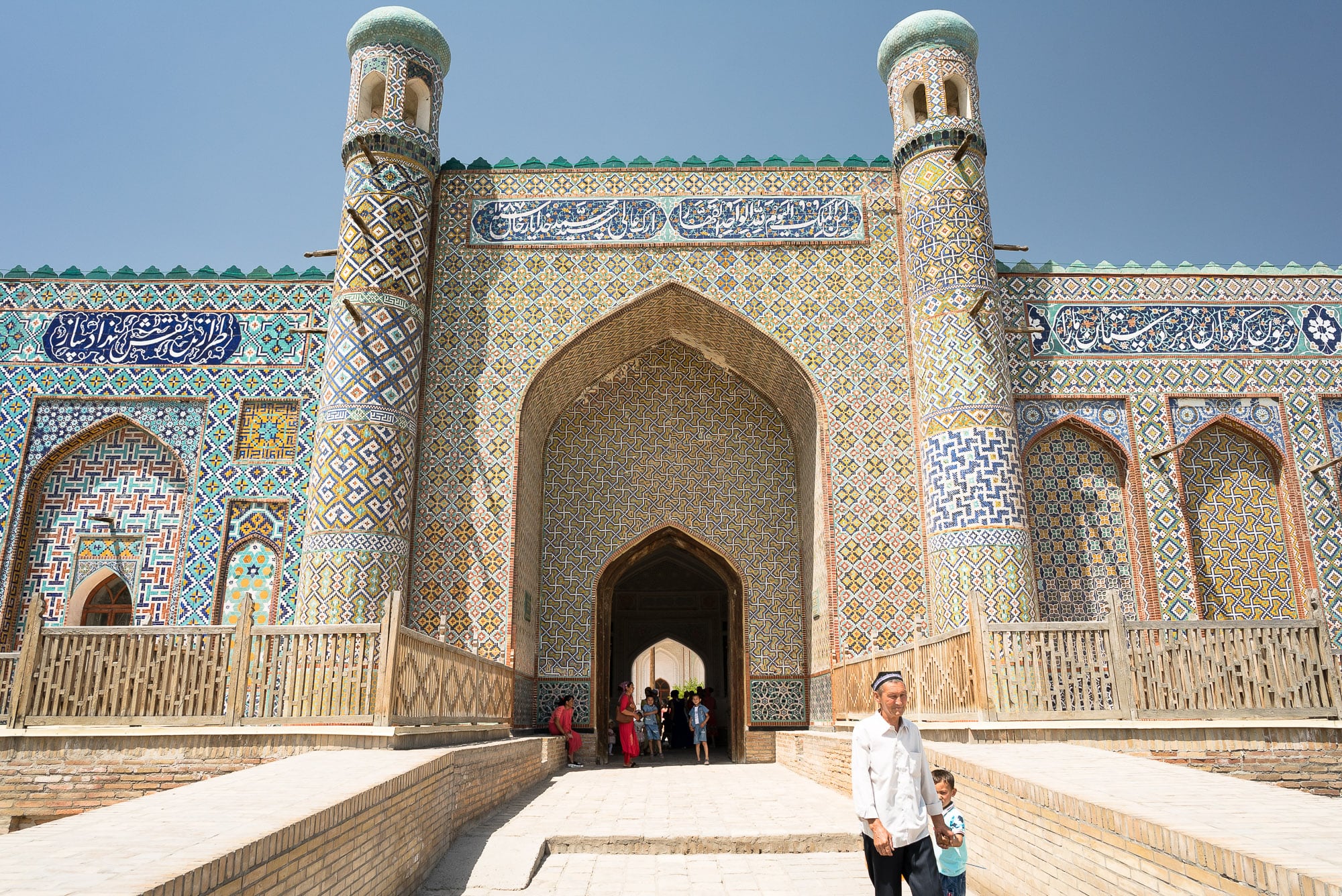 It was essentially a single-story structure spread around a bunch of courtyards: 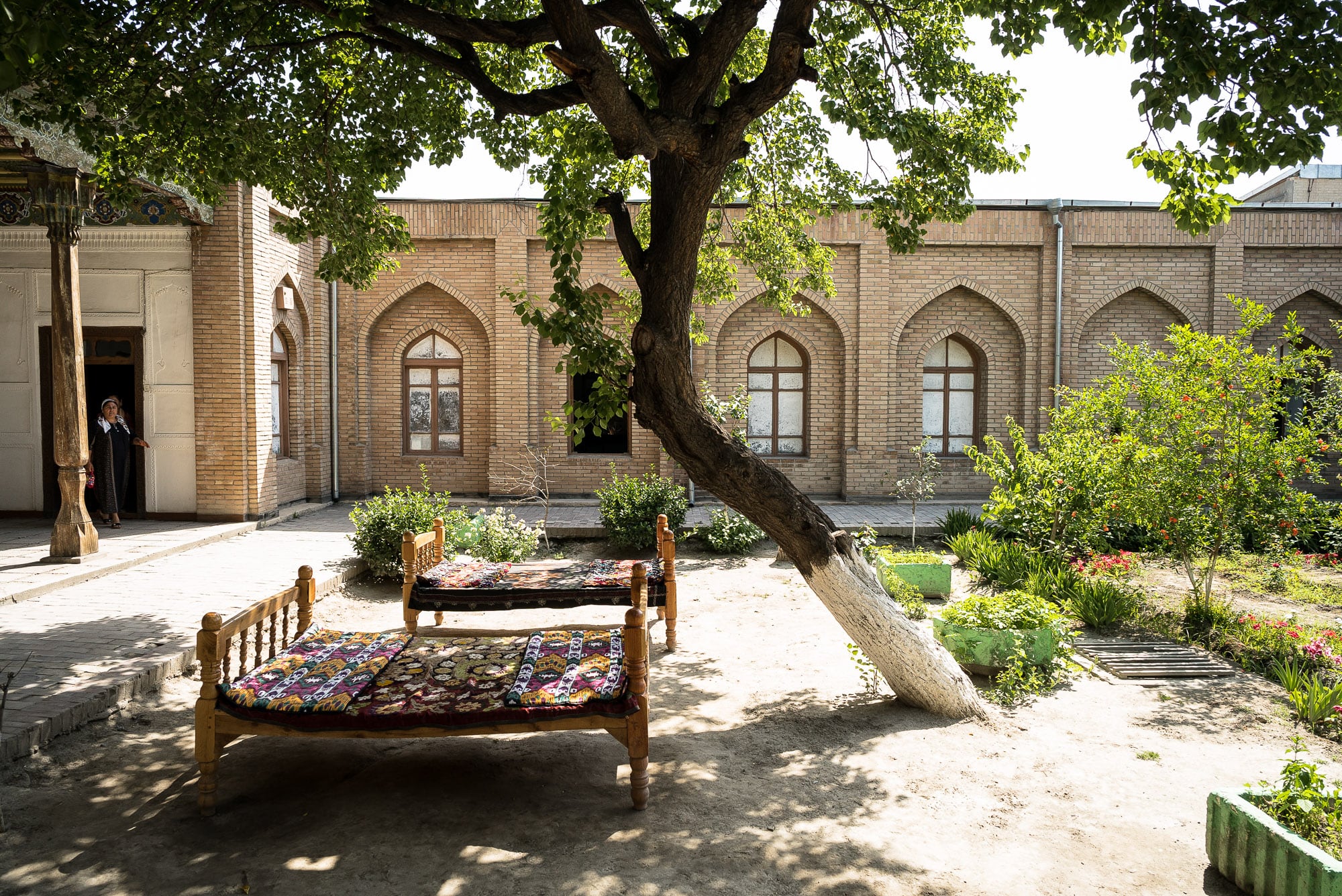 Reminded me of a regular Uzbek country home, just a lot bigger and a lot more luxurious: 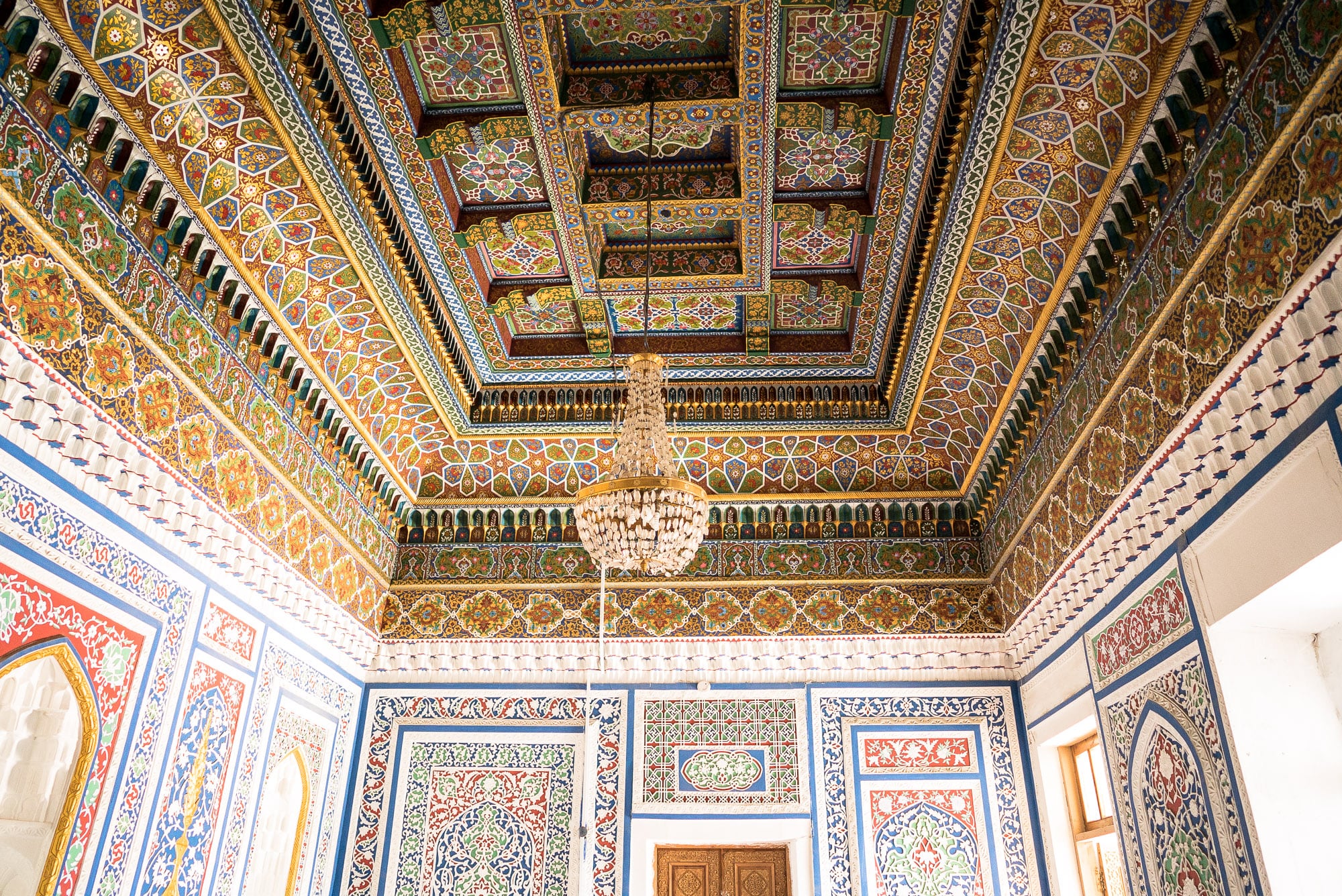 The whole place was full of visitors. Maybe because there was a children’s art exhibition going on: 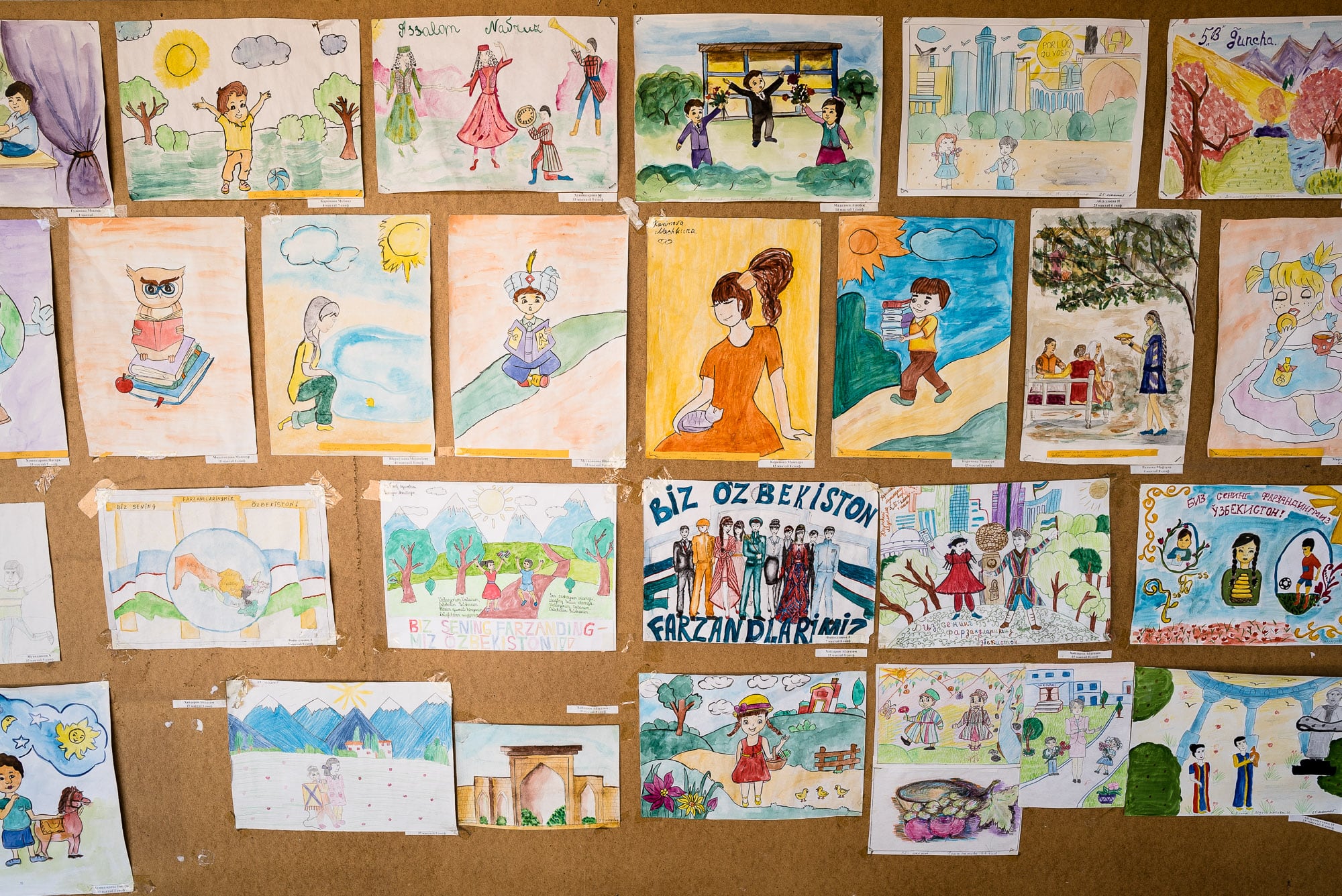 Anyway there were a lot of little ones: 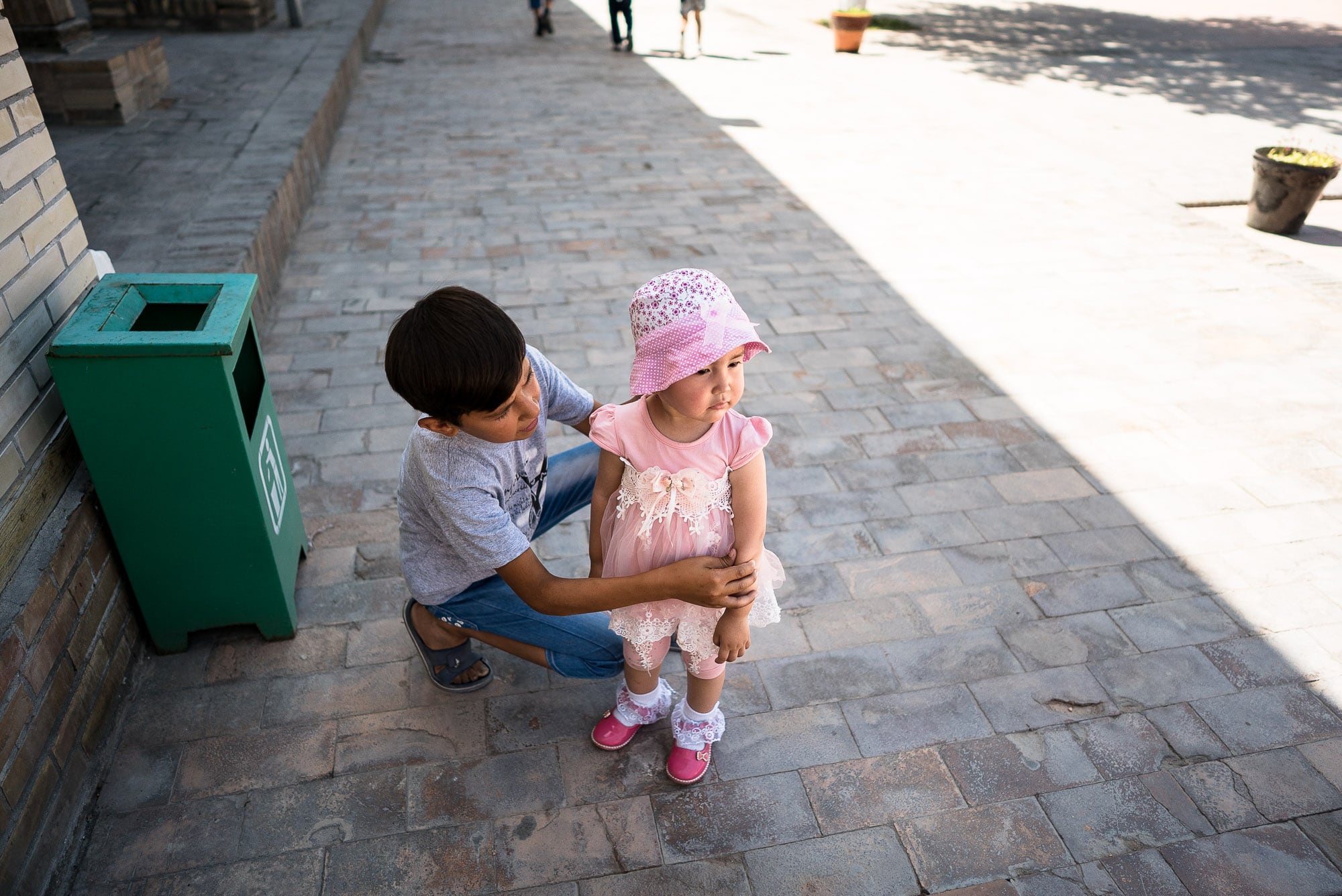 And other, less little ones, to show them around: 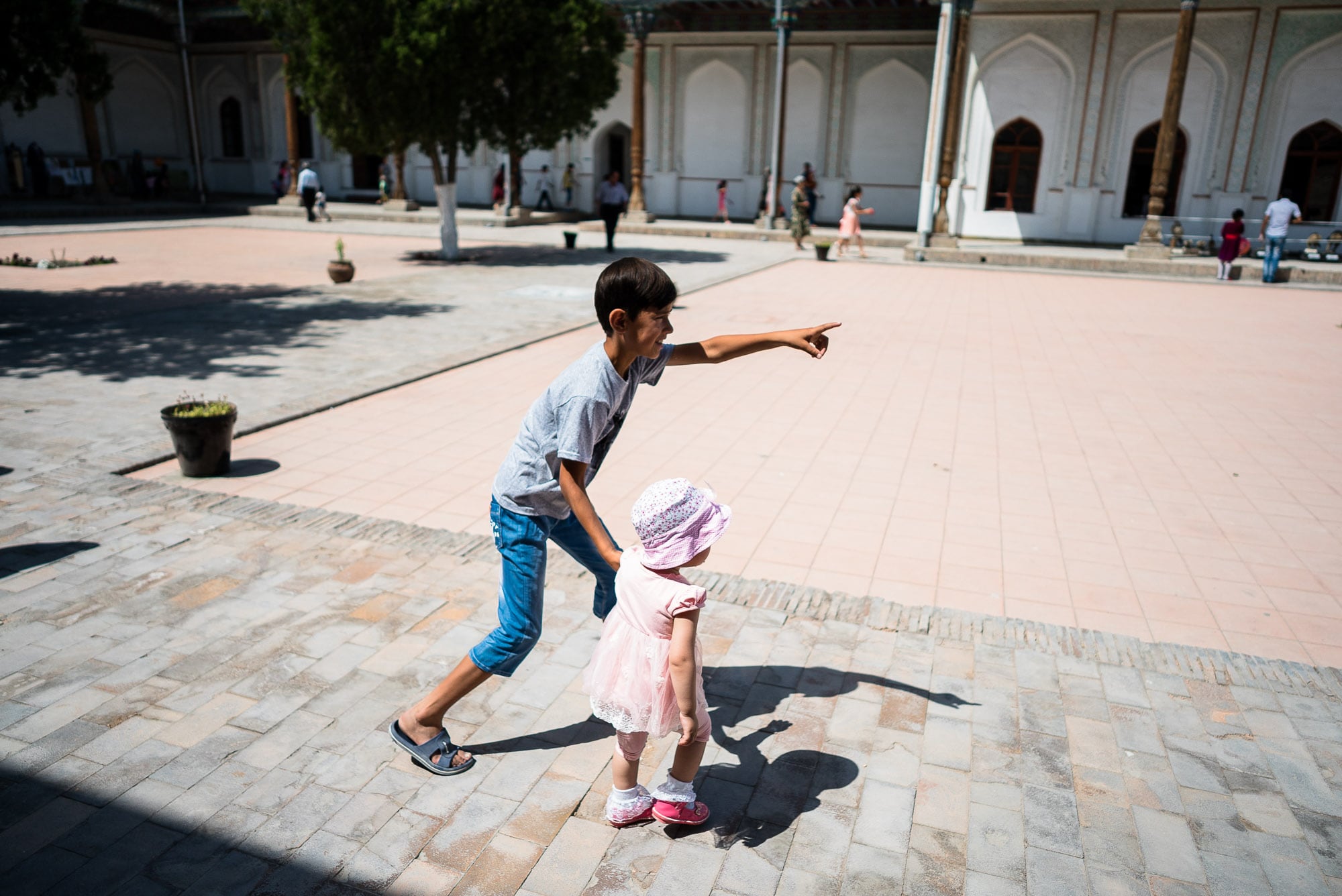 Then we went to the Jami Mosque: 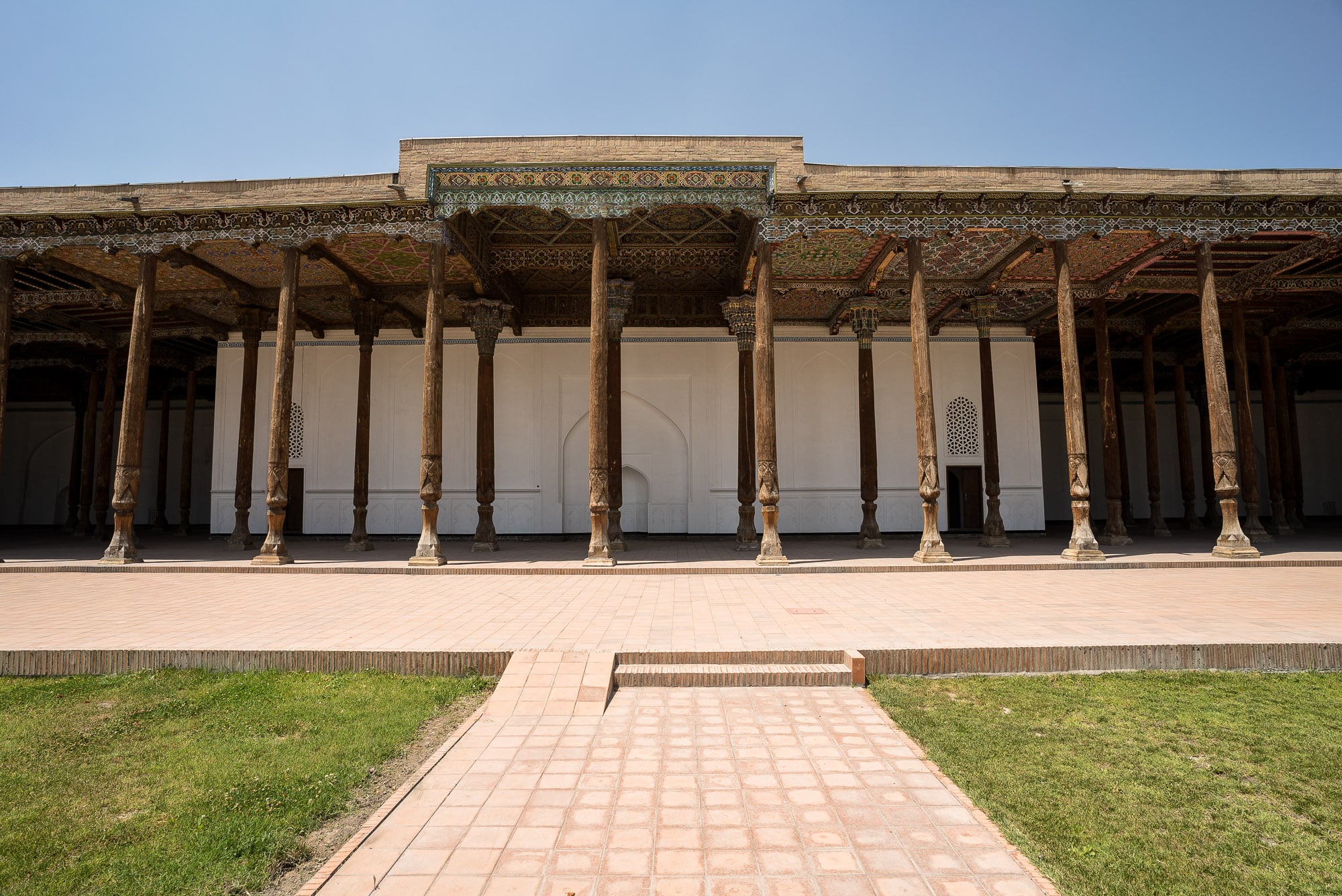 The place had beautiful wooden columns: 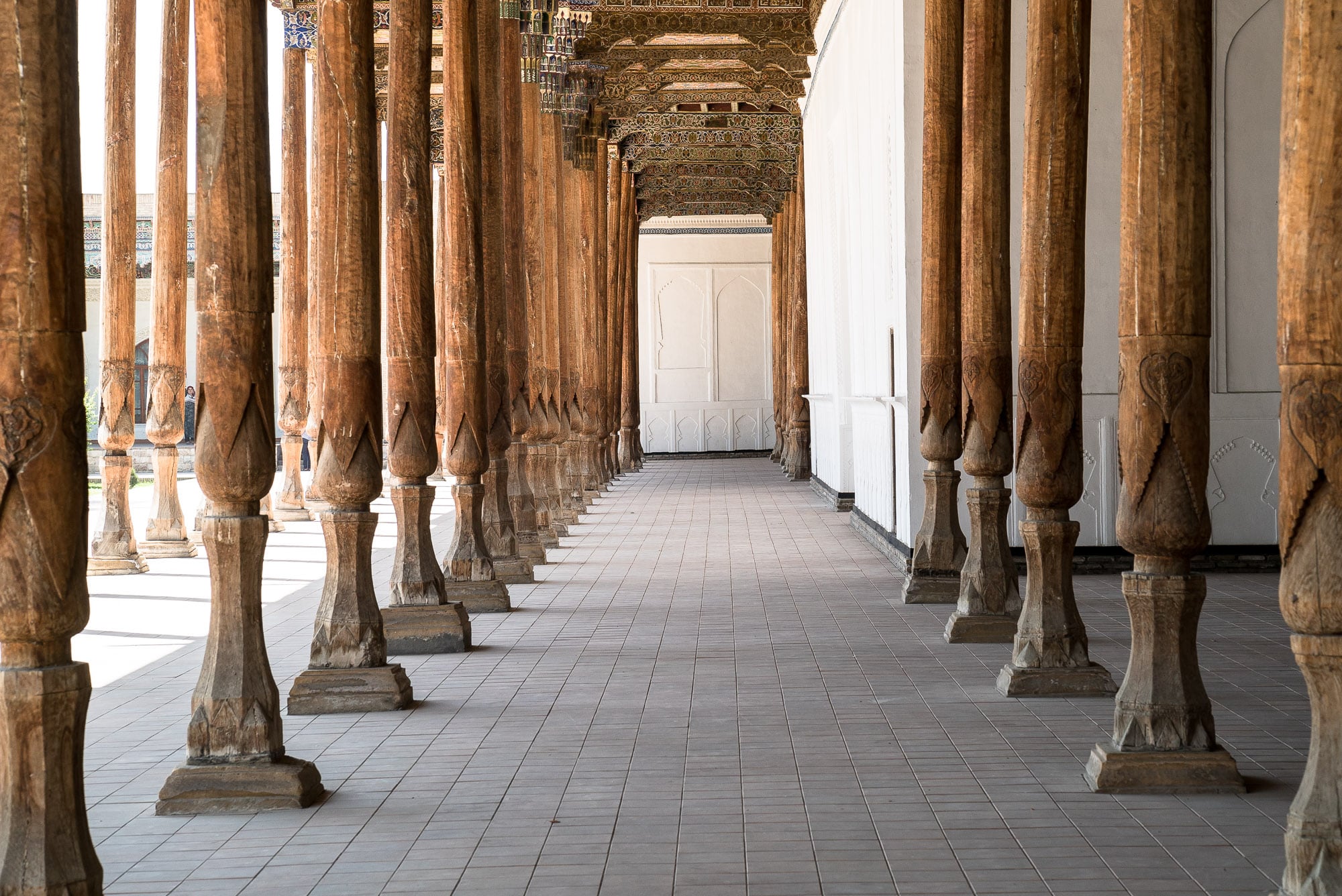 And a delicately decorated ceiling: 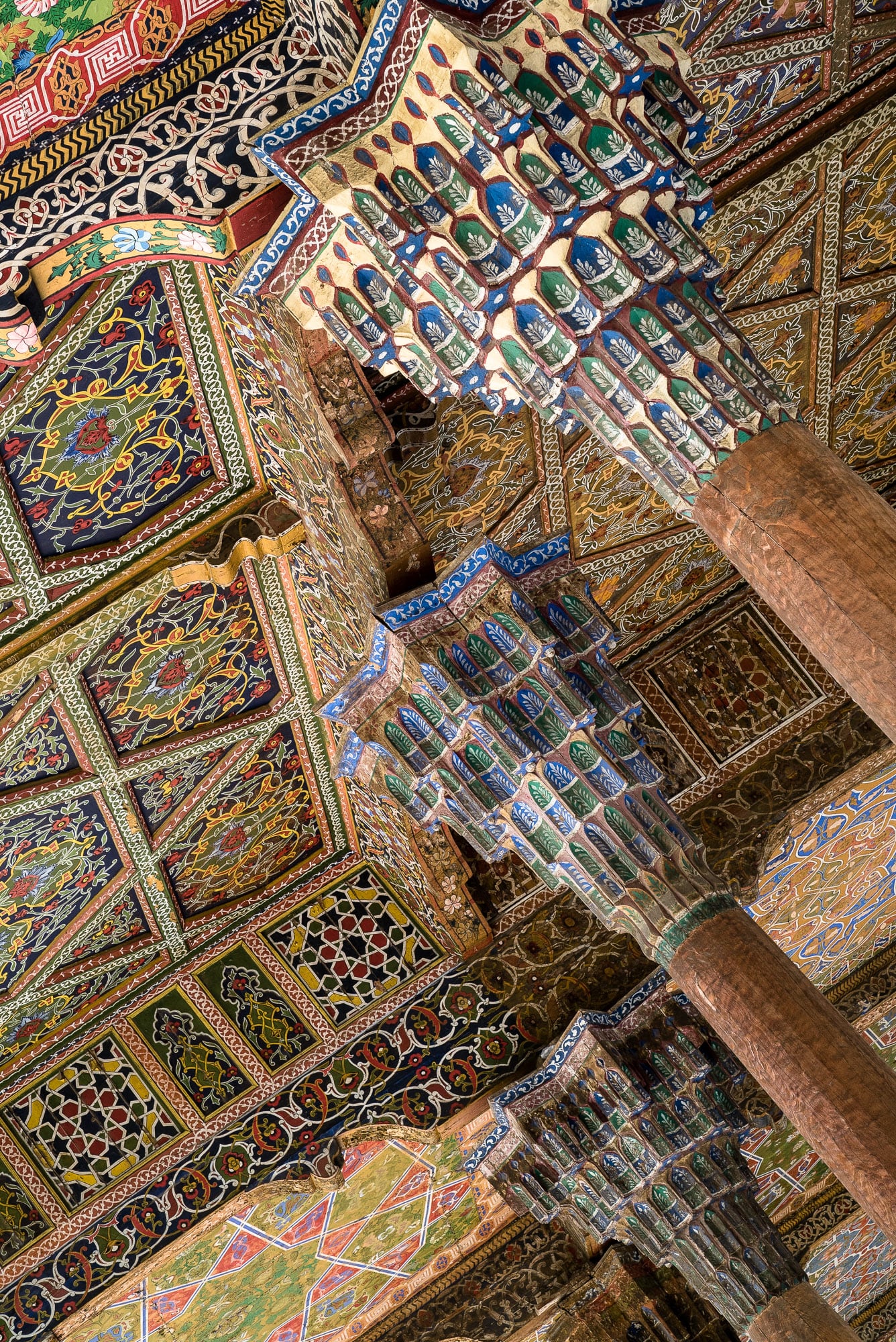 And of course there was a tall minaret in the center: 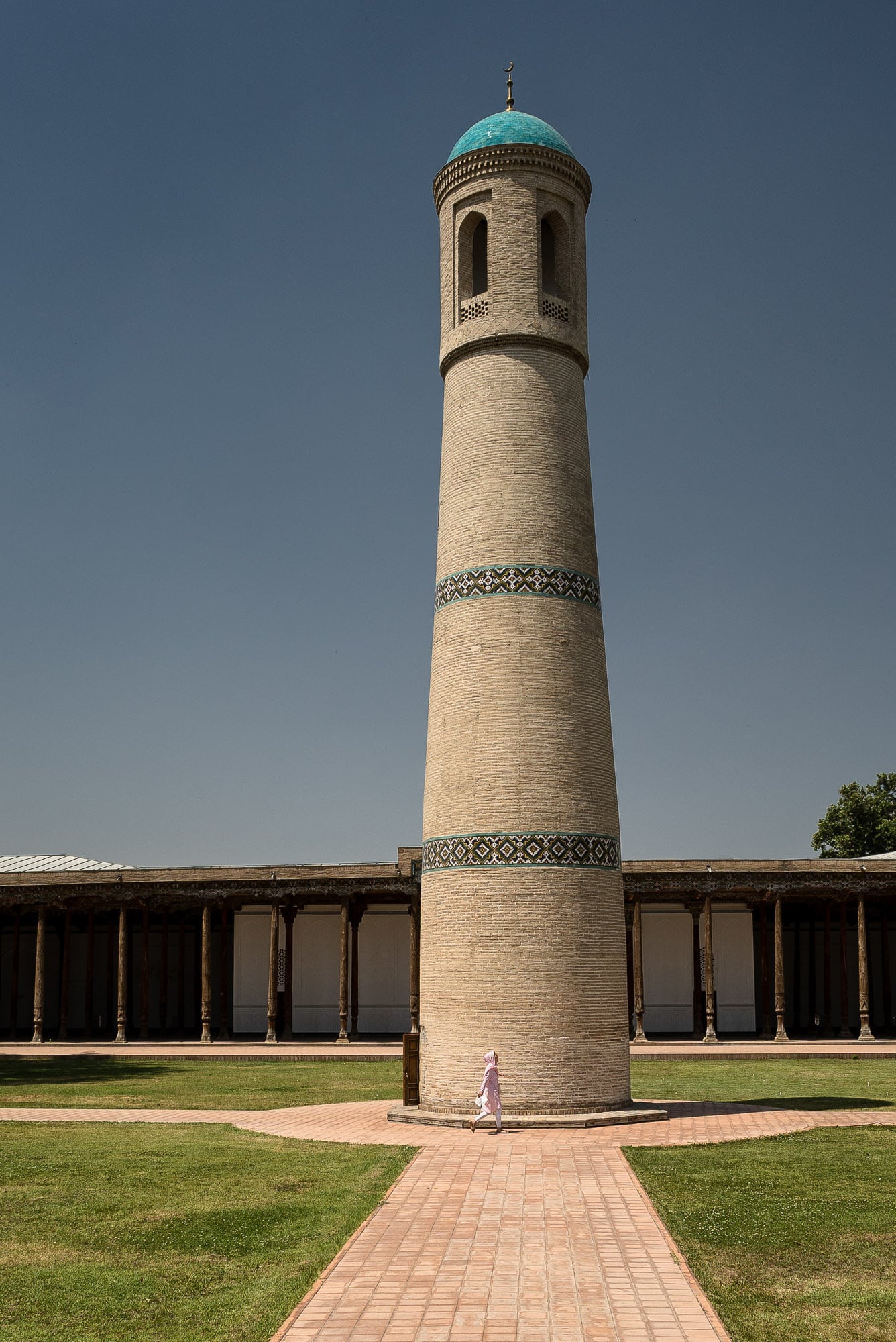 And here, too, a couple of little ones were frolicking around: 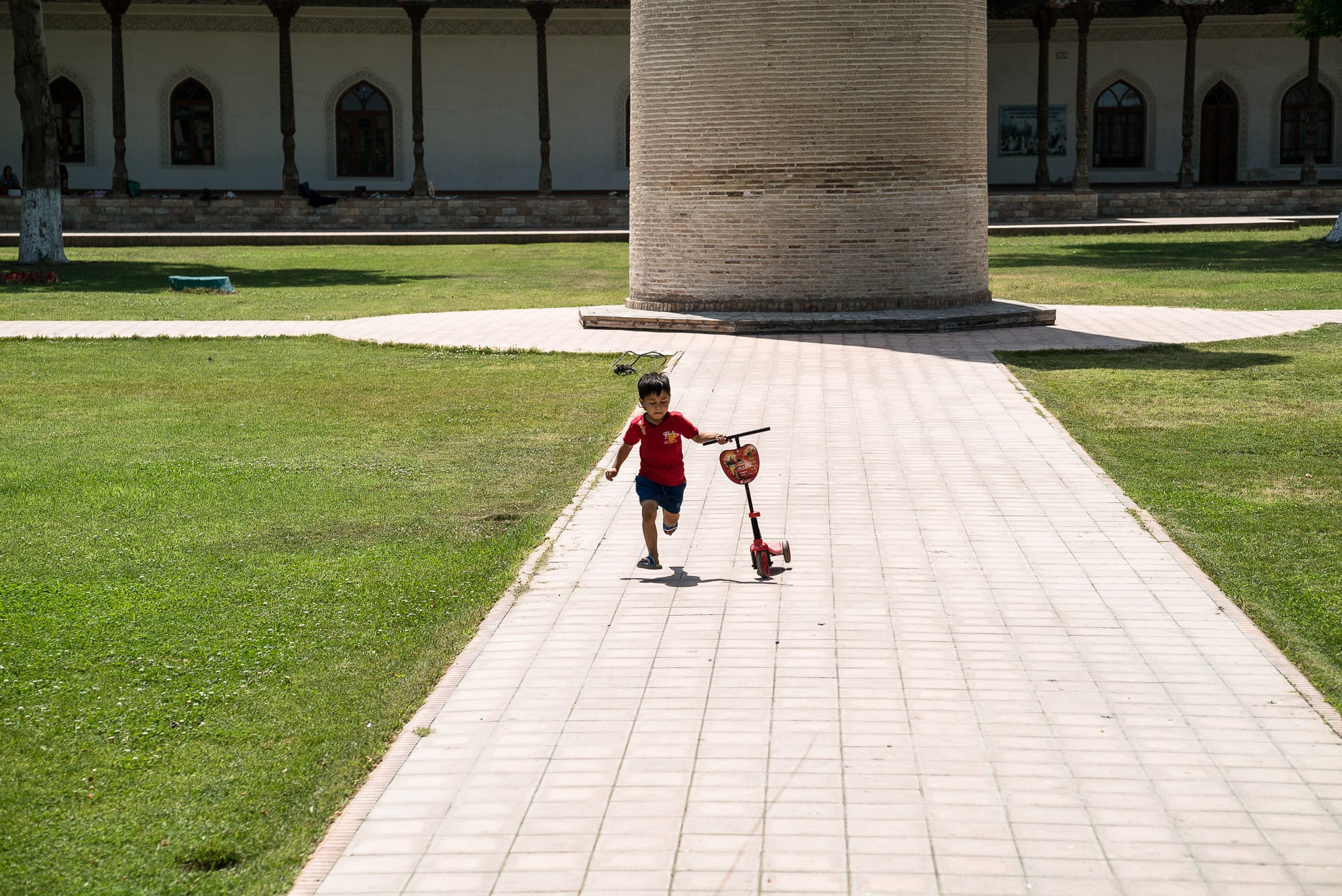 We then hopped into a cab that was going to take us to the border with Tajikistan. But we were hungry, so we asked the driver if he could tell us a place where we could grab some food.

He took us right to a restaurant that served plov: 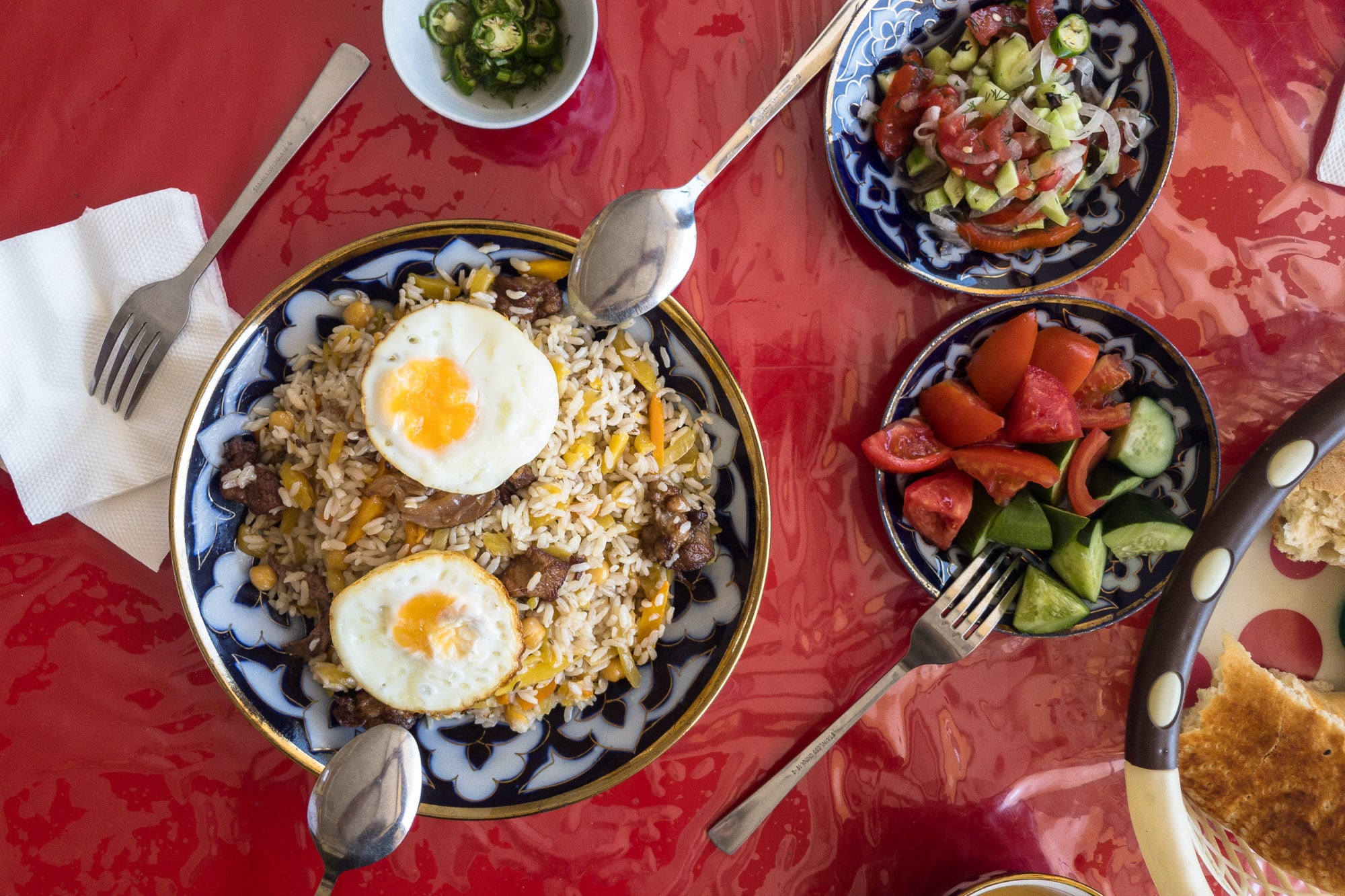 Then he sat down in a little distance, because it was the month of Ramadan, and he wasn’t going to touch any food or drink until sundown. We felt a bit guilty, so we asked him if maybe we ought to just leave, but he smiled and said Ramadan was for him to worry about, not for us, and we were supposed to just enjoy our meal: 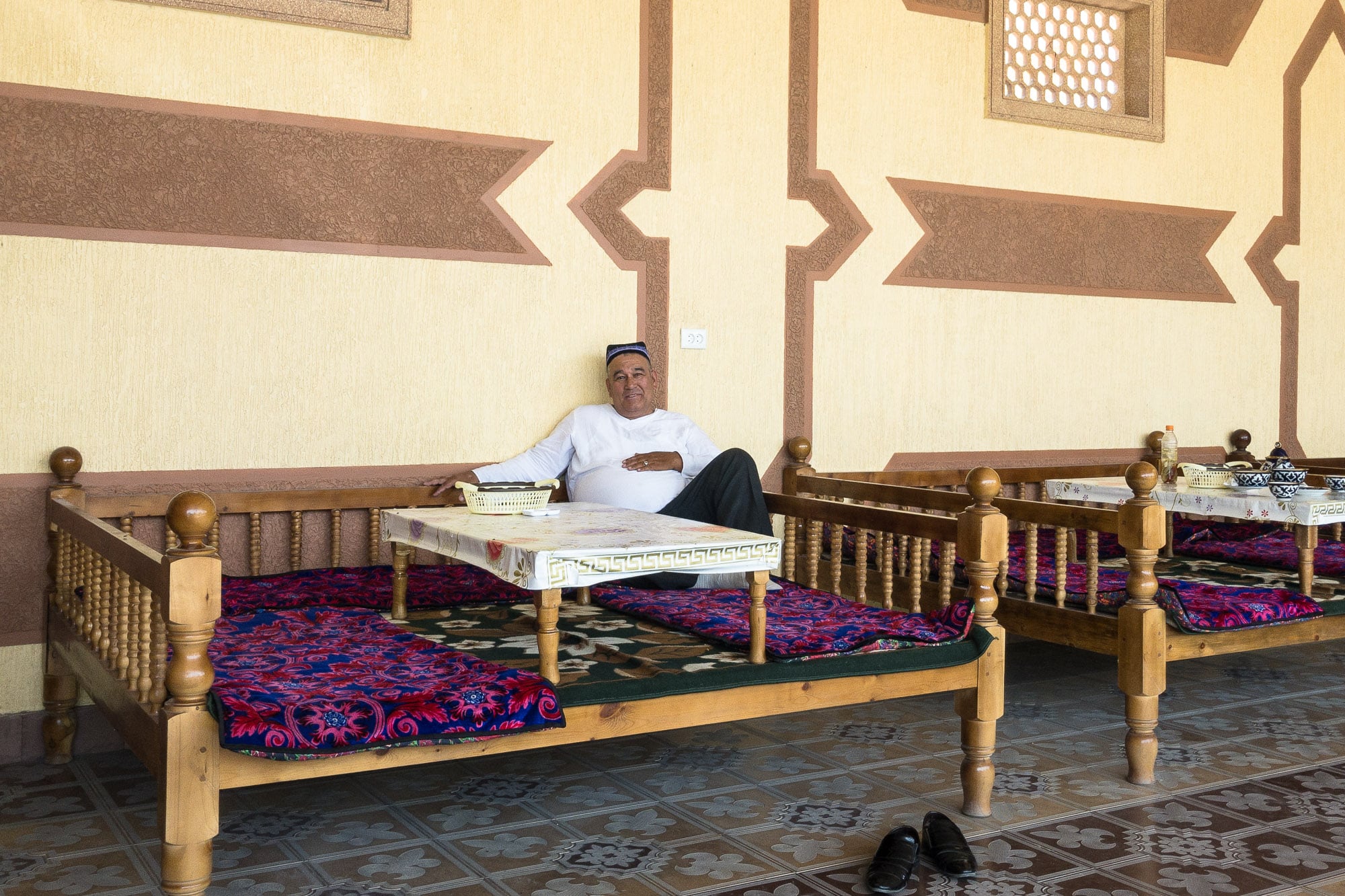 Then he dropped us off at the border. It seemed totally deserted, and it was apparently closed for both Uzbeks and Tajiks. Only foreigners could go through this border, which meant that there wasn’t really that much traffic at all: 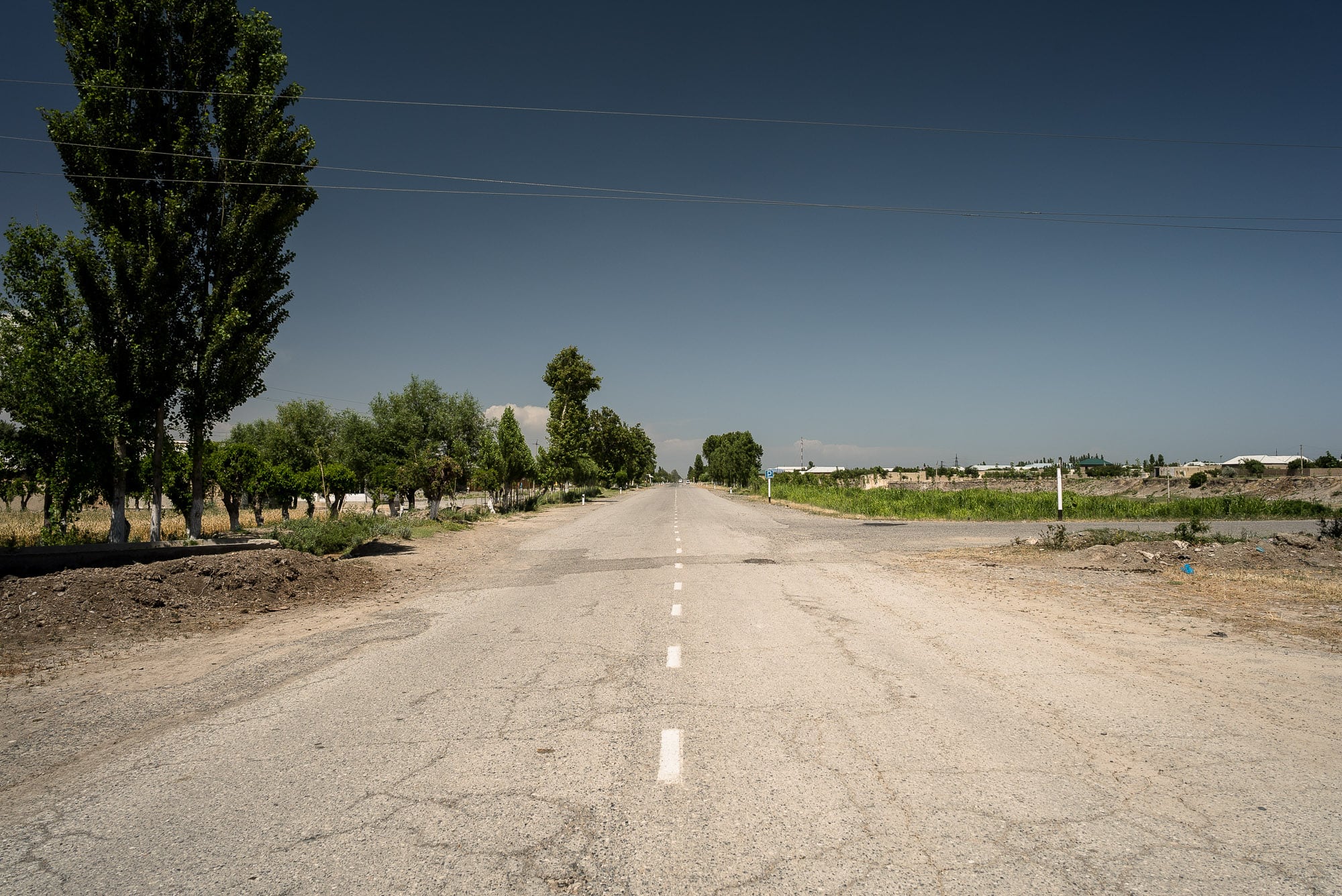 After a lot of small talk and the most thorough border search I have ever experienced, we were through. One of the Tajik border guards gave us a lift to a bus station close by, and we hopped into a marshrutka: 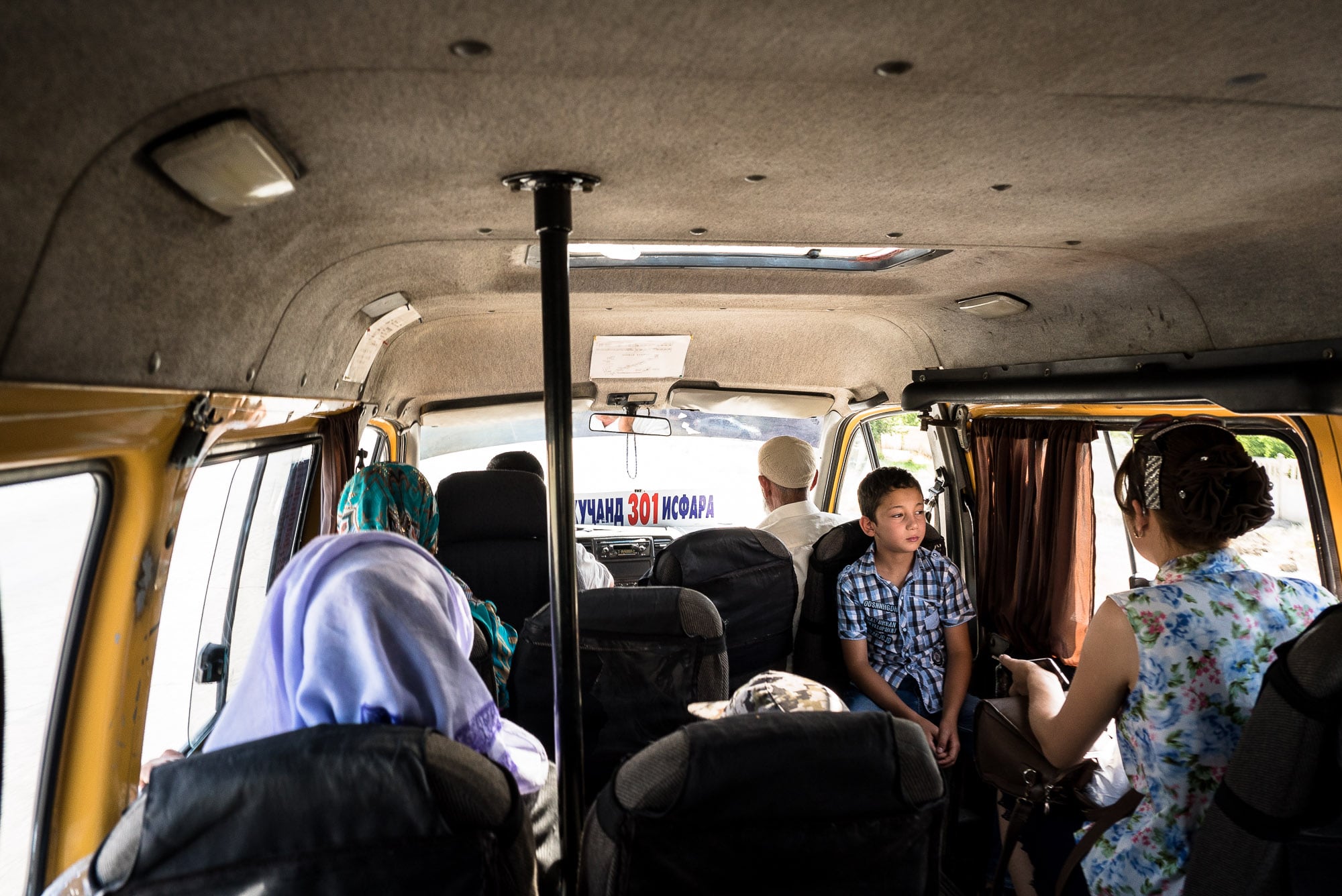 It took us to Khujand, the next big town. Once we got there, we had to hop into another cab to get to our guesthouse, and it was on this taxi ride that I found out the most awesome thing: 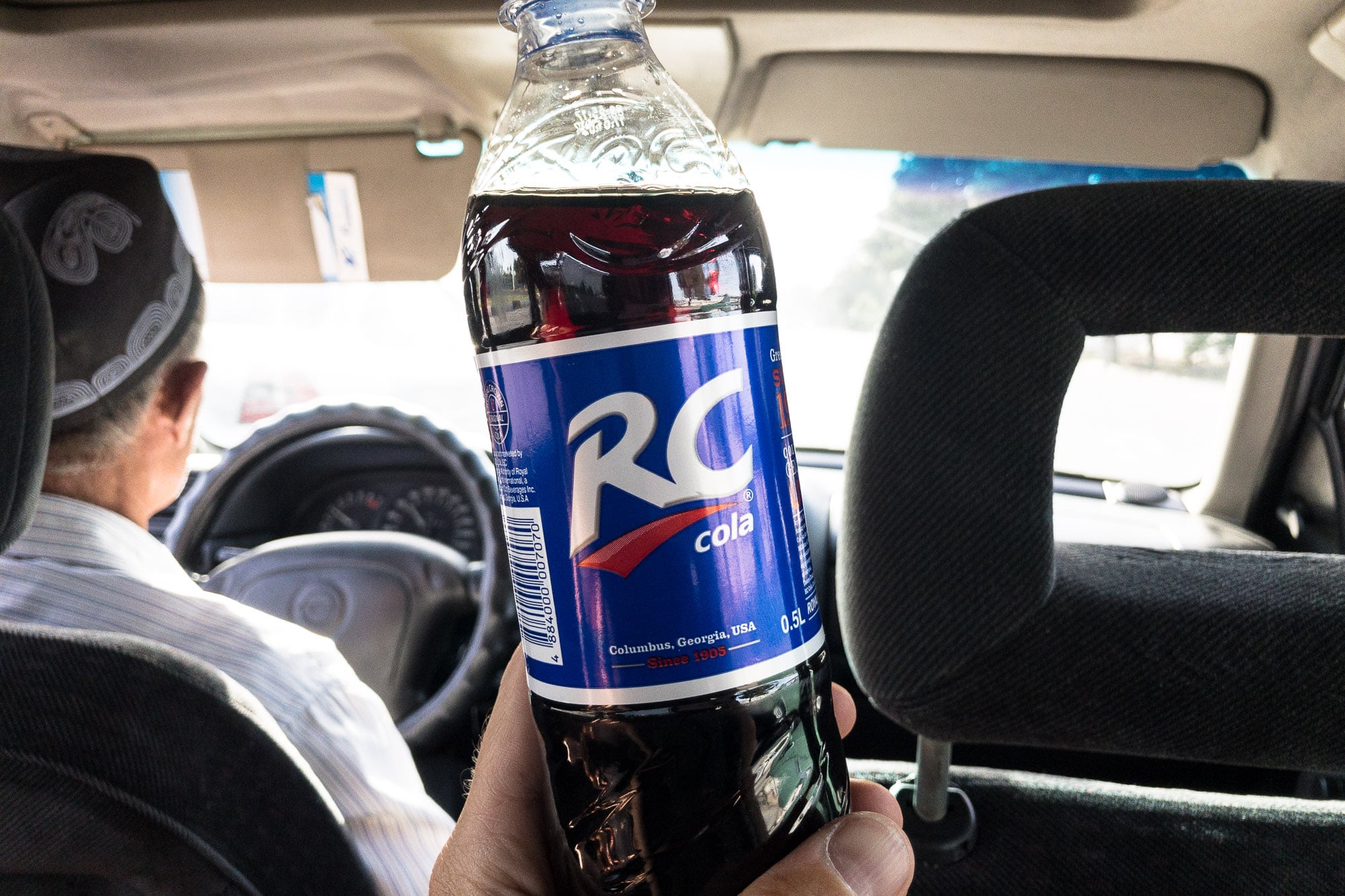 Remember that Simpsons episode with Michelle Pfeiffer when Homer says: “We can’t even pay our bills and they’re drinking Royal Crown Cola!” 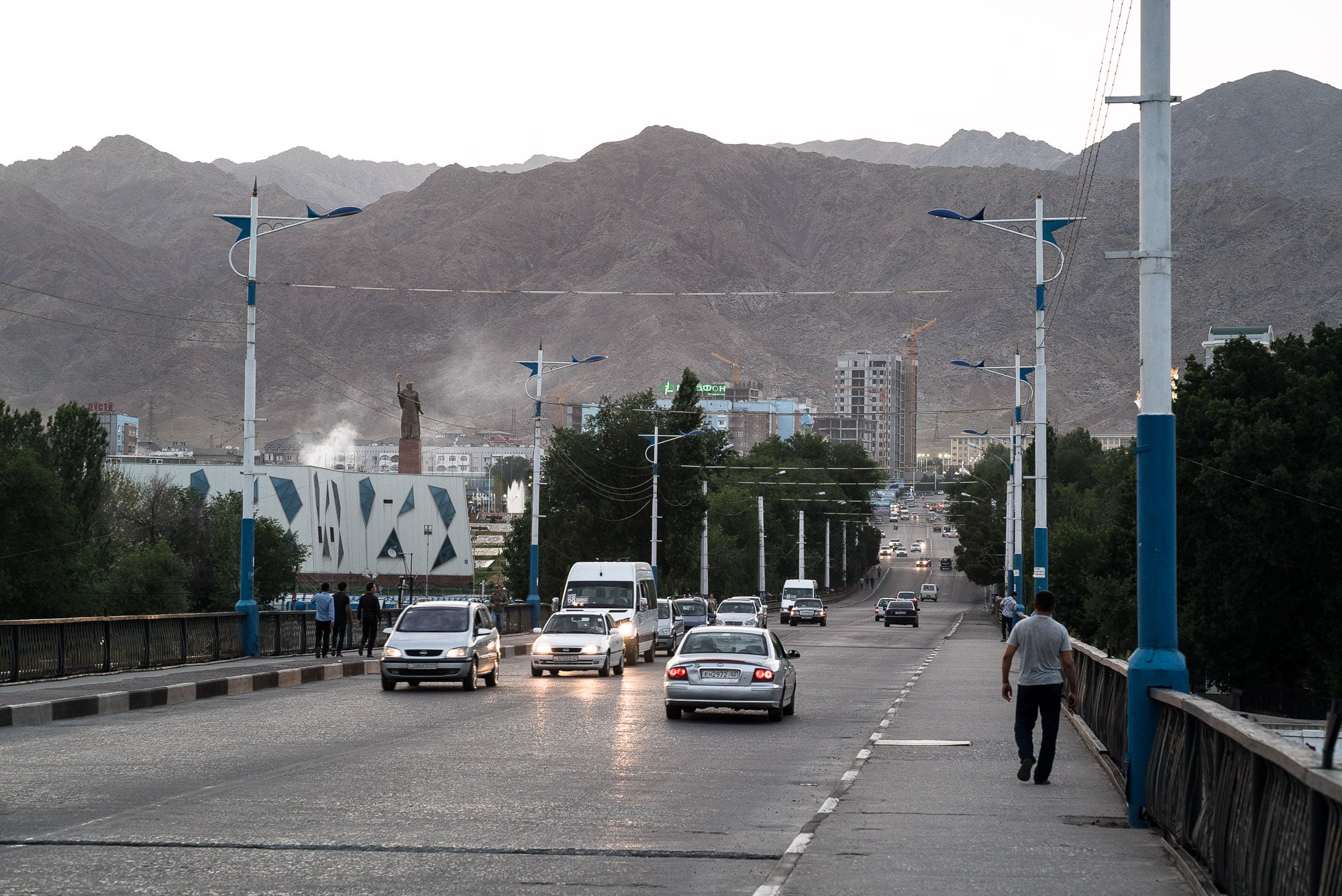 It lay on the banks of the Syr Darya, a river I had crossed many months ago near Tashkent: 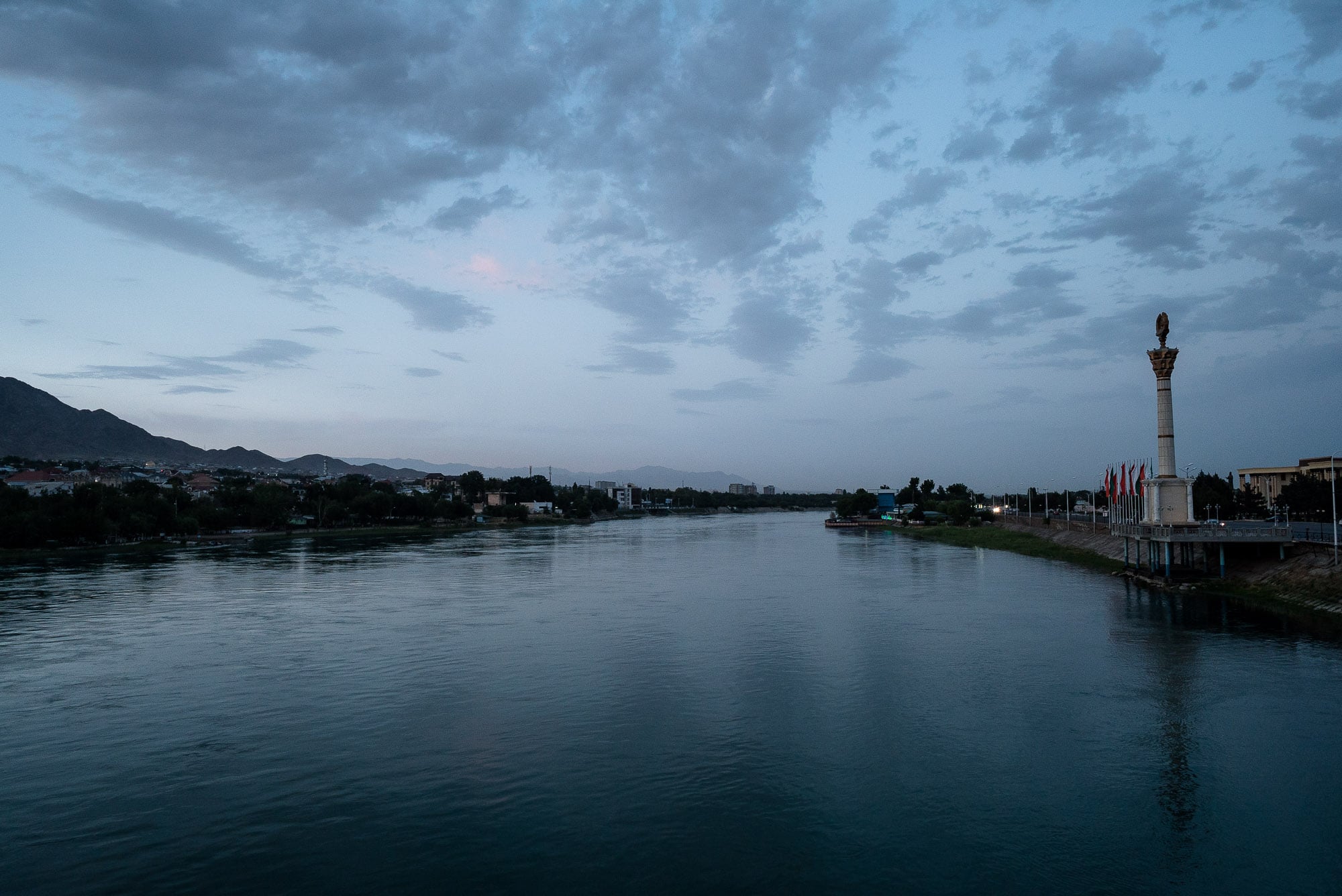 It seemed as though other people had found this place meaningful as well: 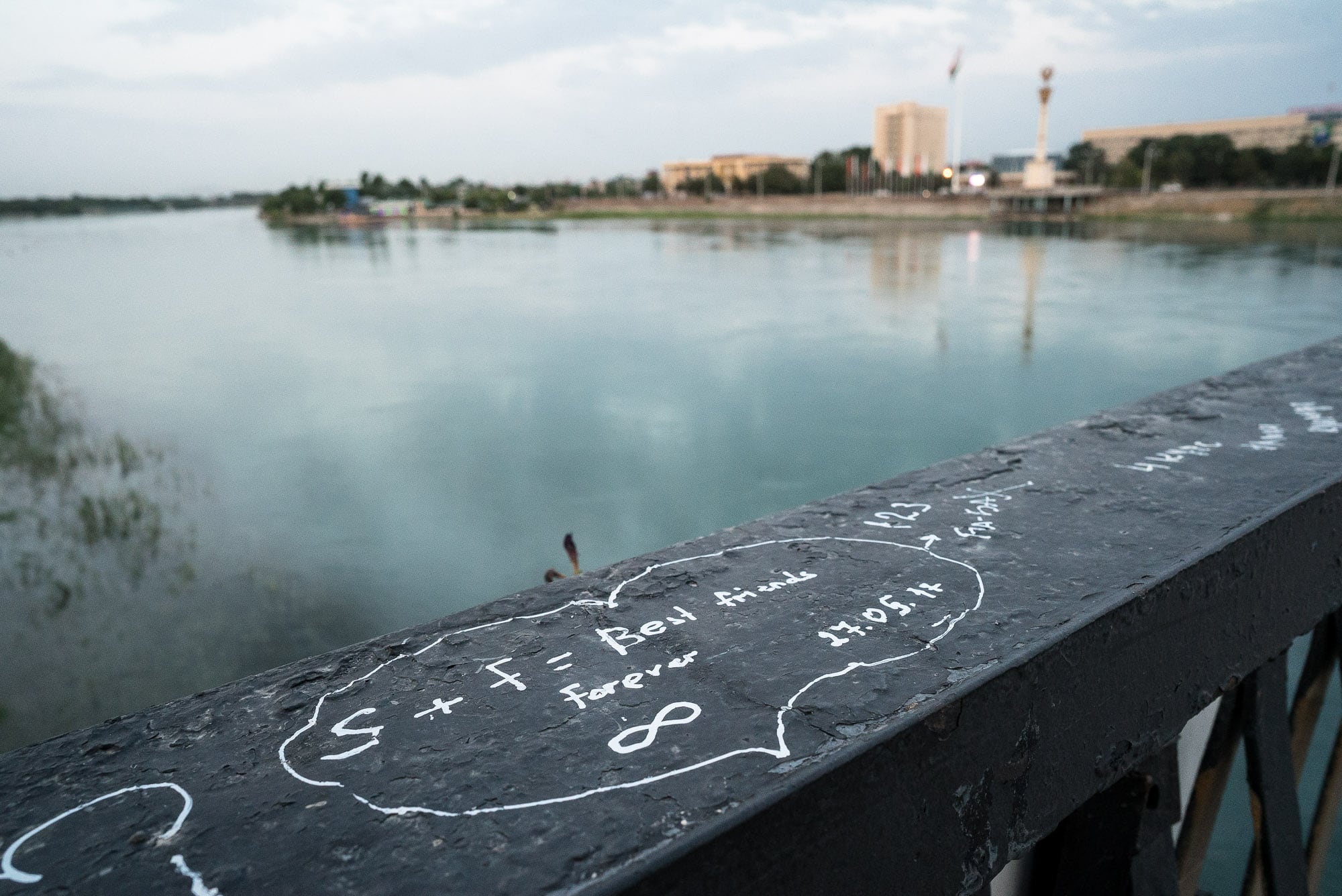 We walked around town a little bit: 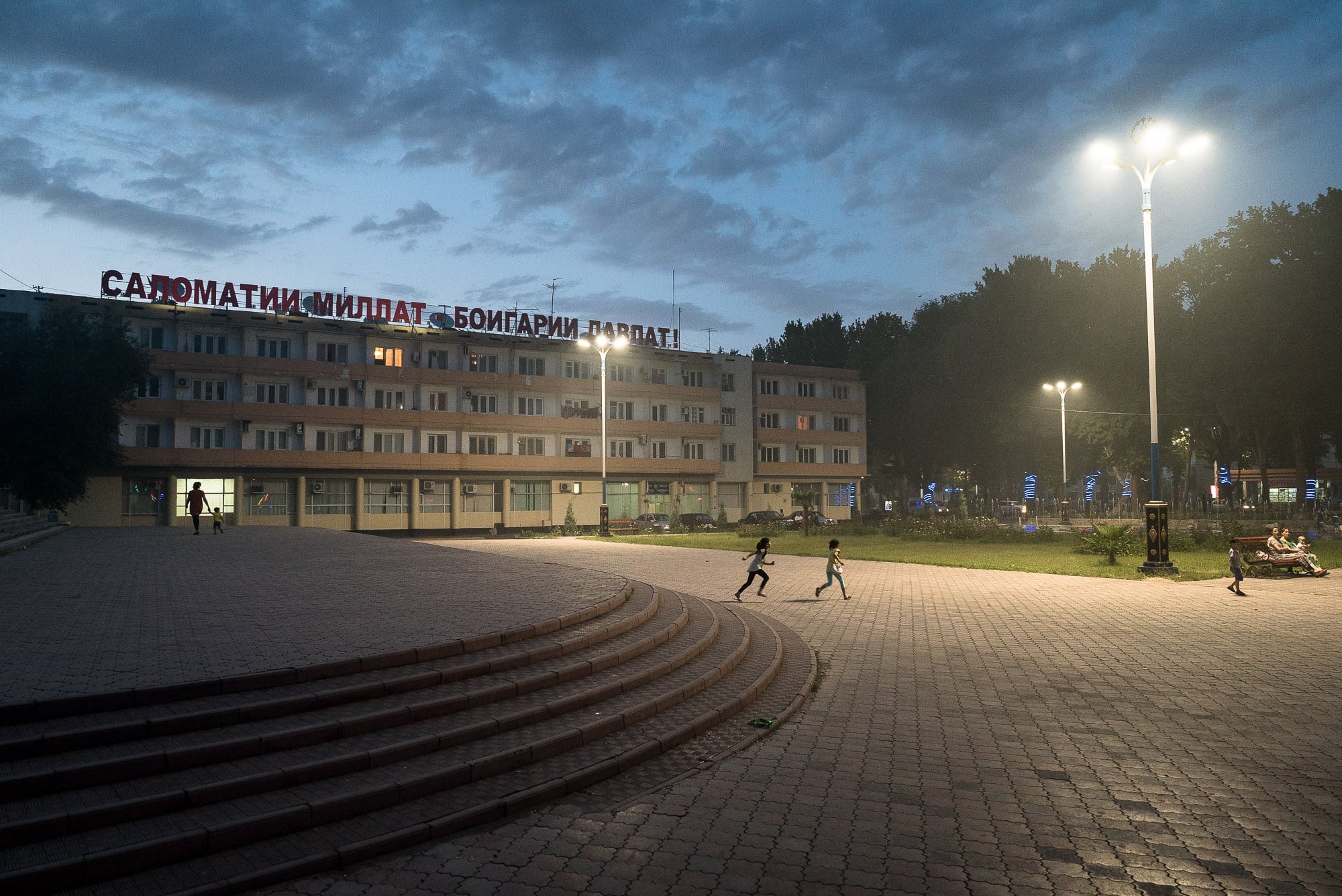 And we found out that a certain general smogginess was due to excessive shashlyk making: 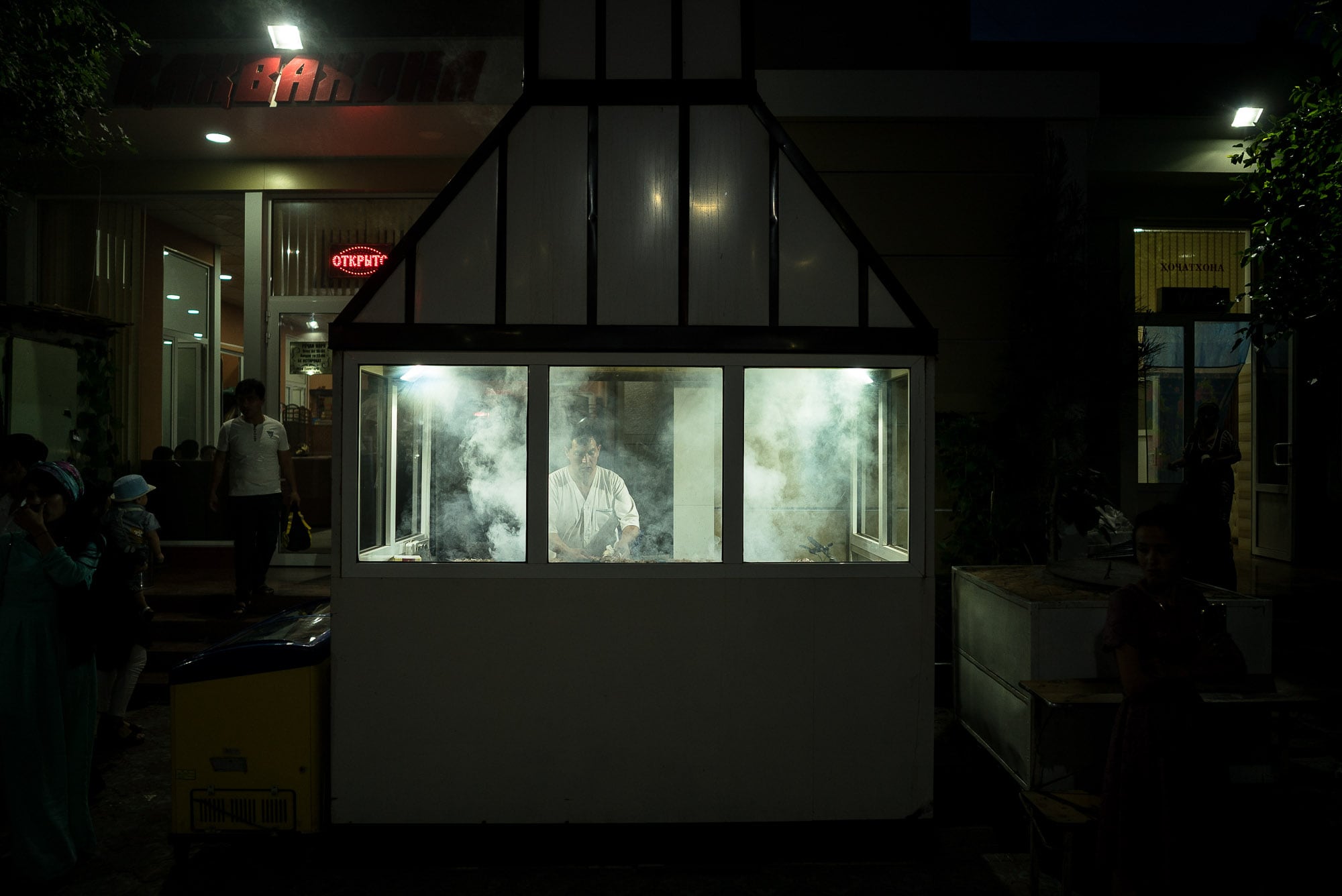 And when I say excessive… 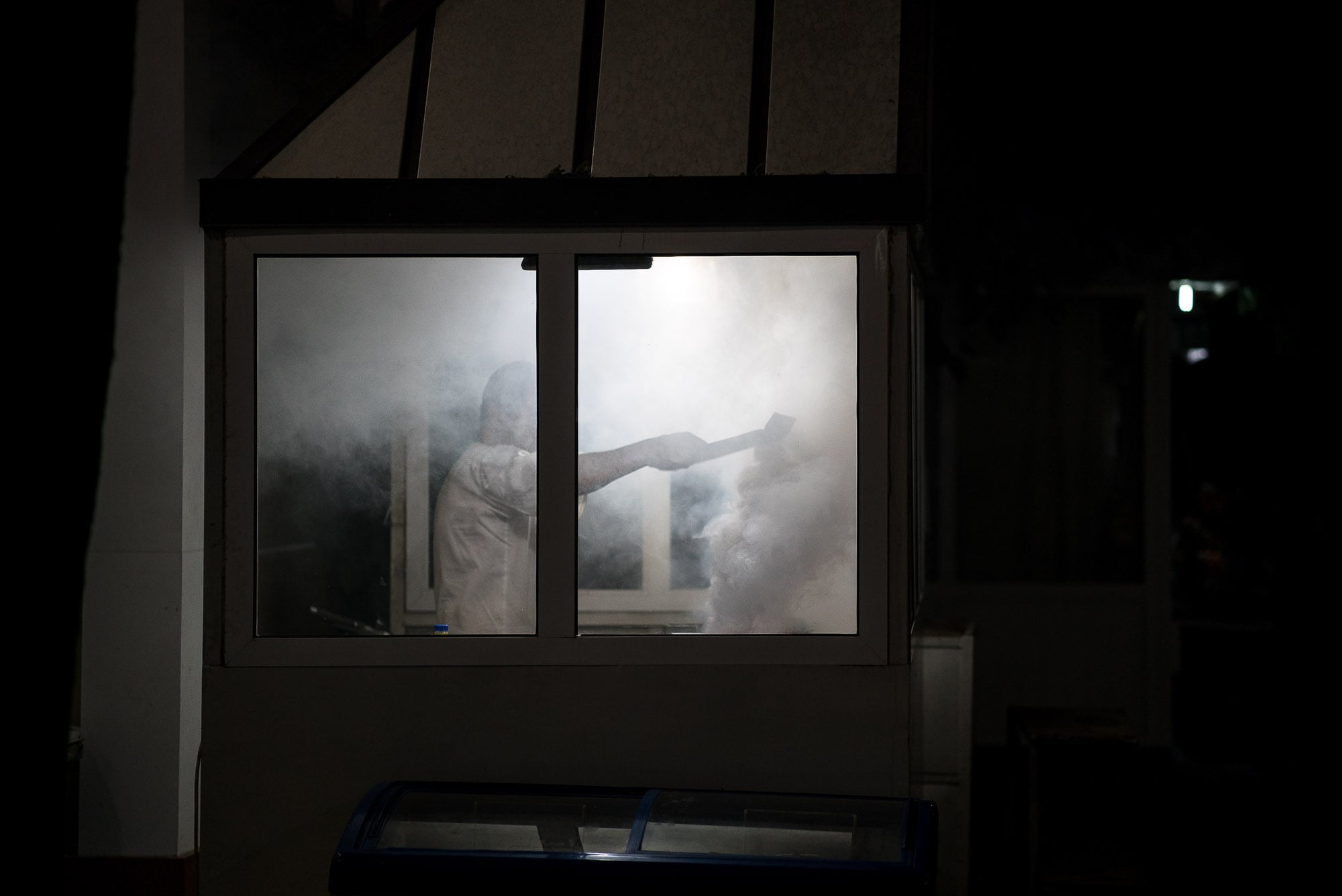